The Inclined Slope of St-Louis-Arviller, is one of the reasons Barry and I favoured this particular French canal and route when asked to choose by Kerry and Tony. 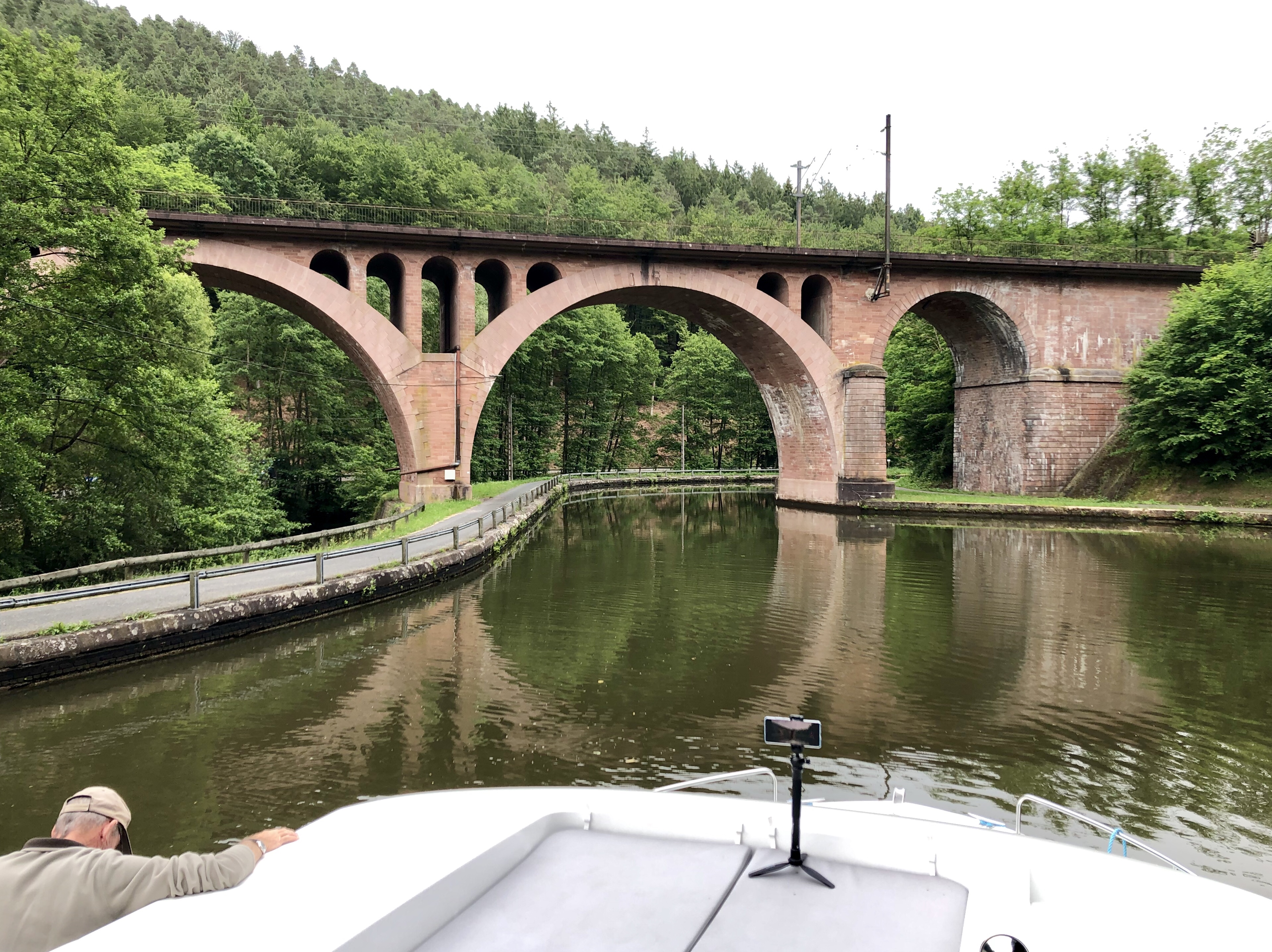 Construction began in 1964, and completed in 1968. In May of that year it was filled with water, though the first boats didn’t go through until January 1969.

Previously there’d been a staircase of 17 locks, stretching over 3.6km, which took boats eight hours to navigate. It now takes just 25 minutes. That’s if luck is on your side and you arrive at the inclined plane at the right time. 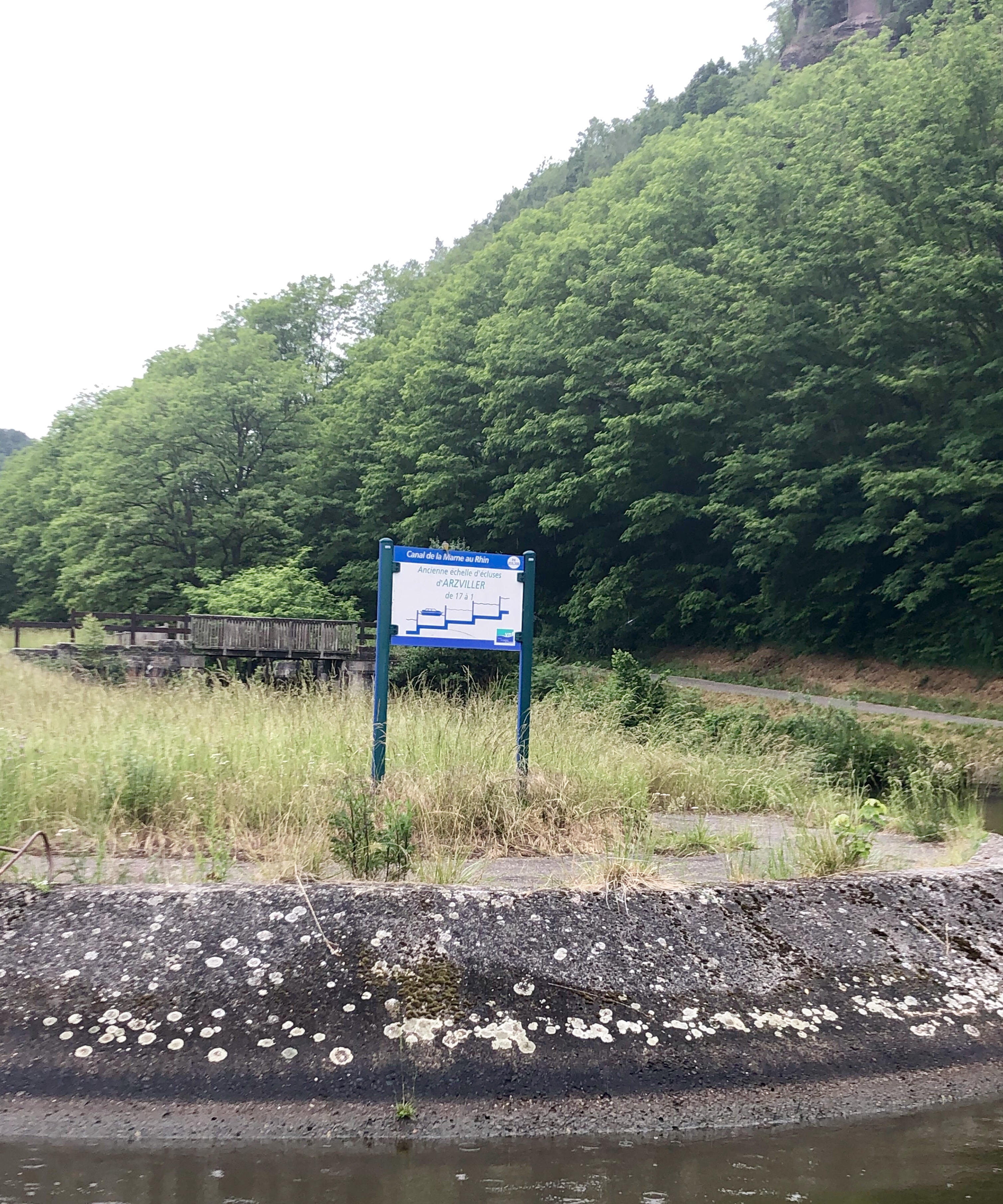 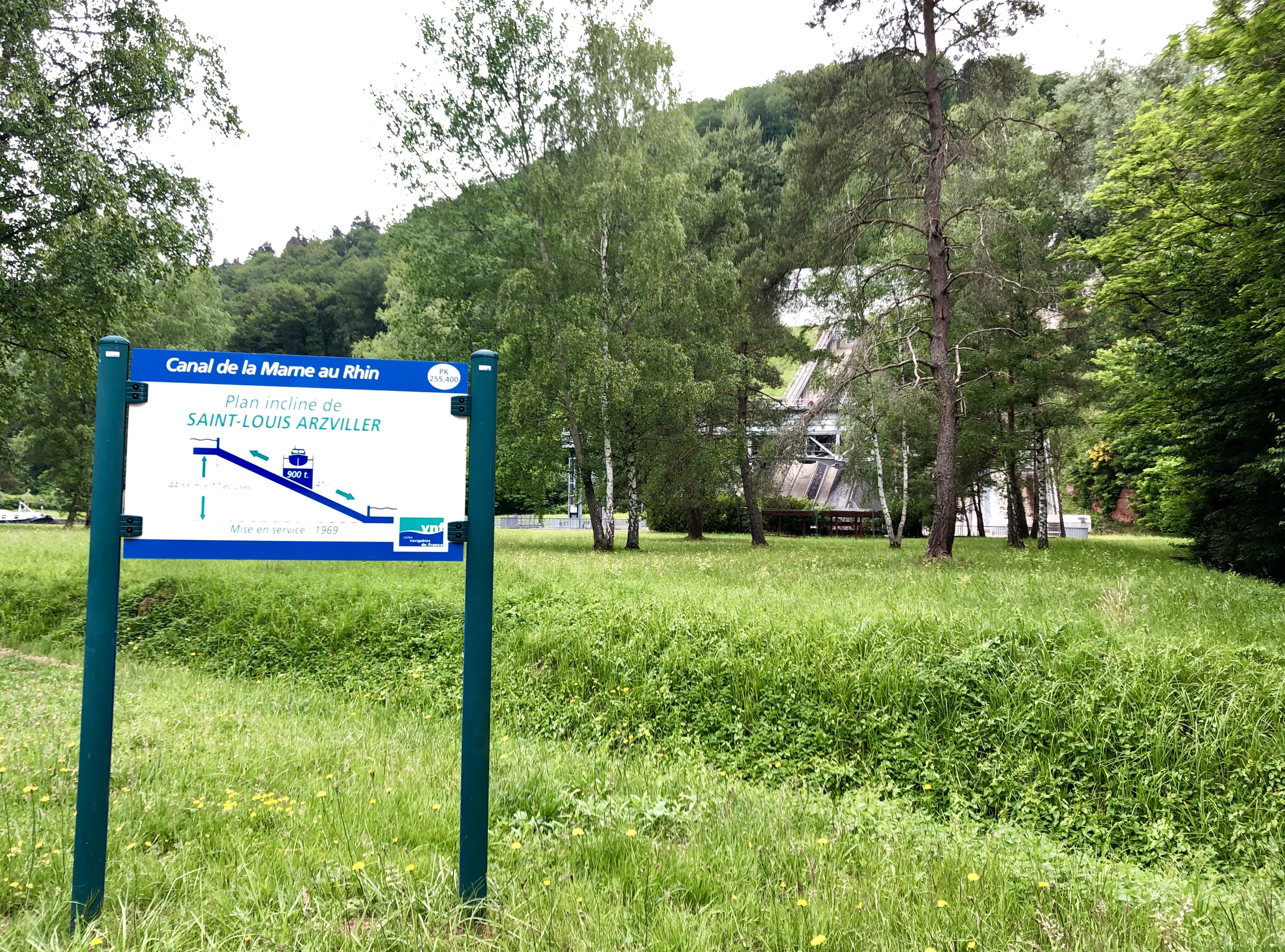 We did. No idea how mind you! No planning on our part. Splendid. If you get it wrong you could be waiting an hour or more, depending on where the lift is and how many boats are waiting. 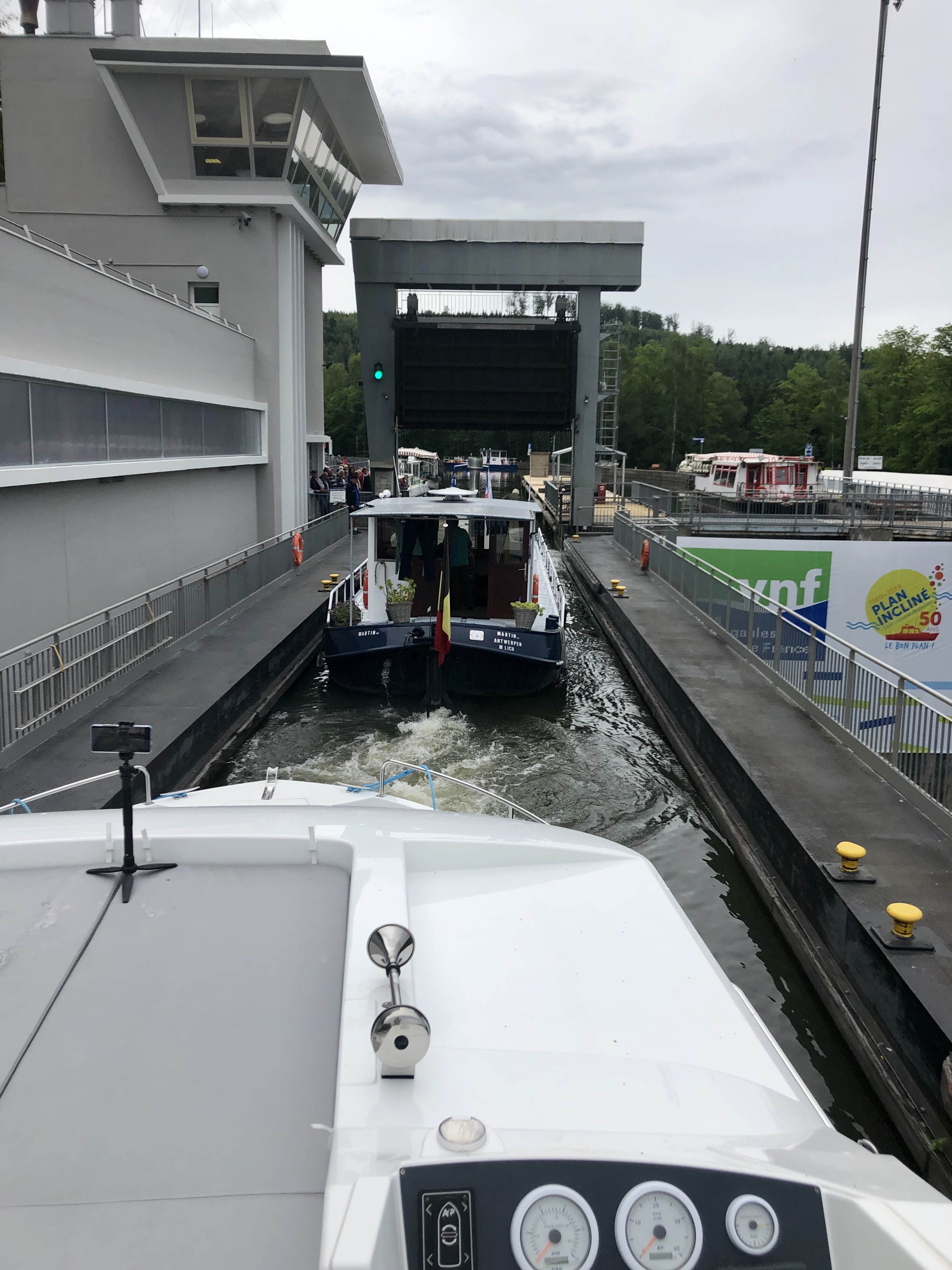 I did a ‘Live Feed’ video on our NB Areandare Facebook page. If you’re interested take a look. https://www.facebook.com/nbareandare/. Apologies in advance for the shocking beginning when I stupidly thought I could film AND steer the boat in safely. Safety came first obviously. 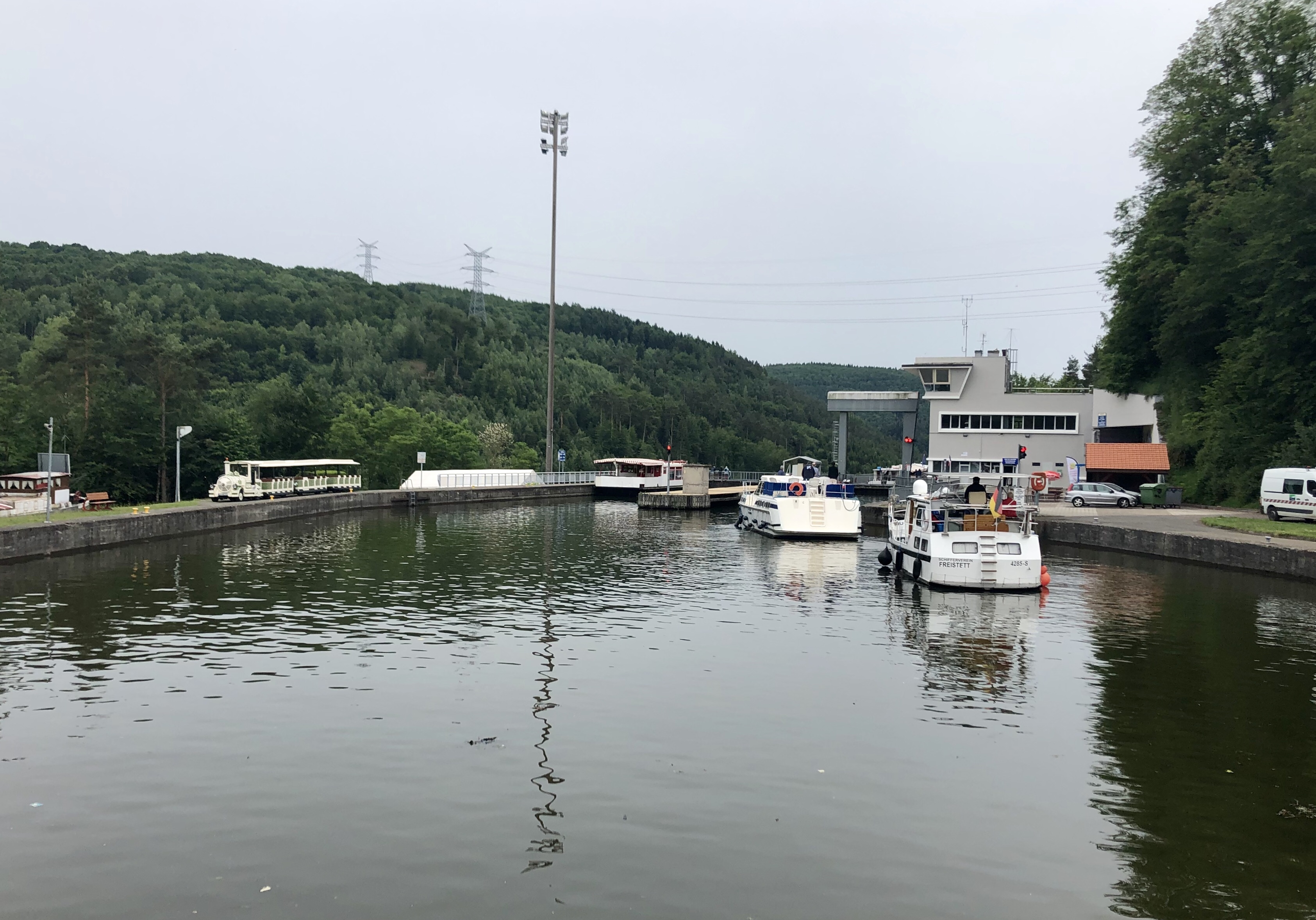 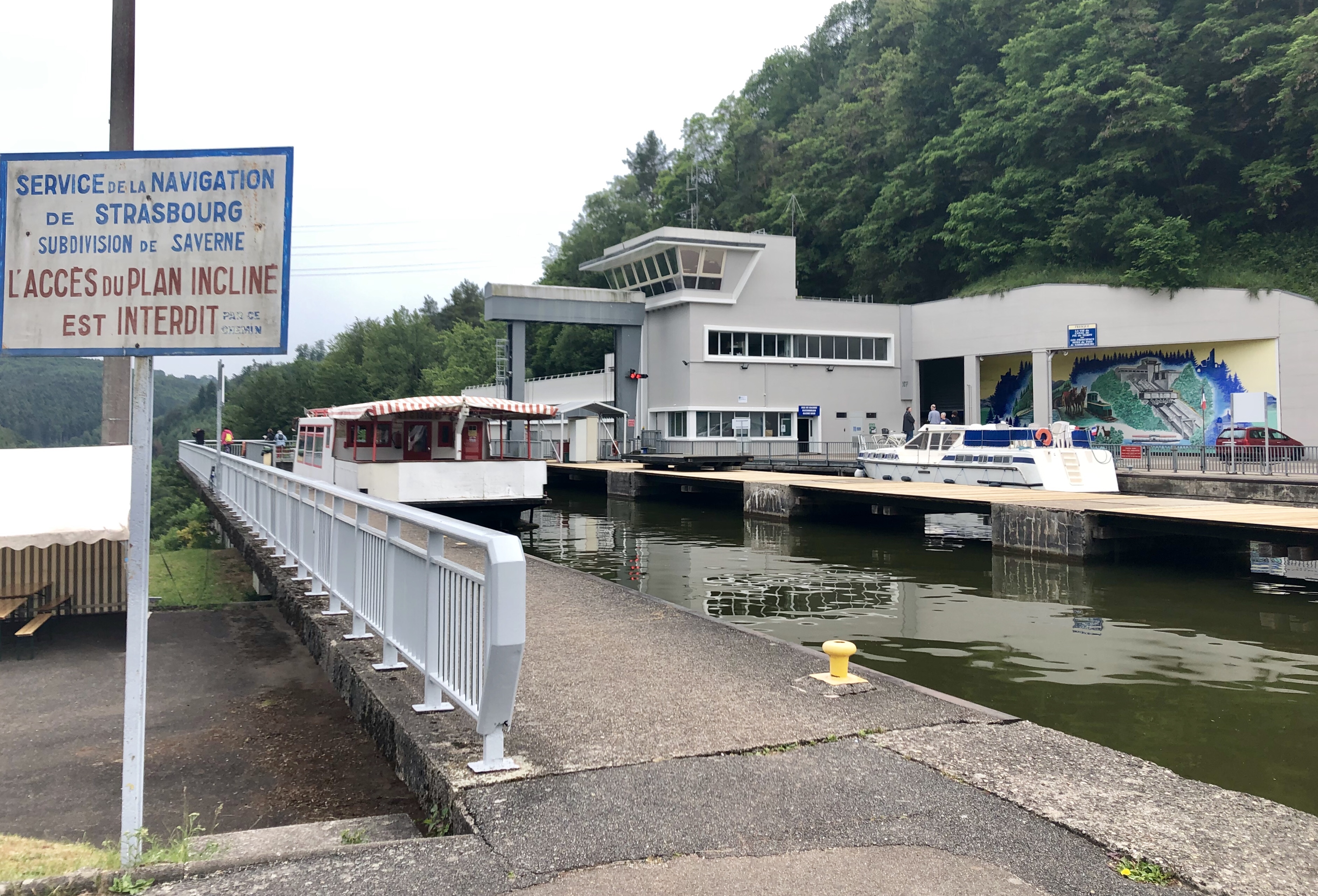 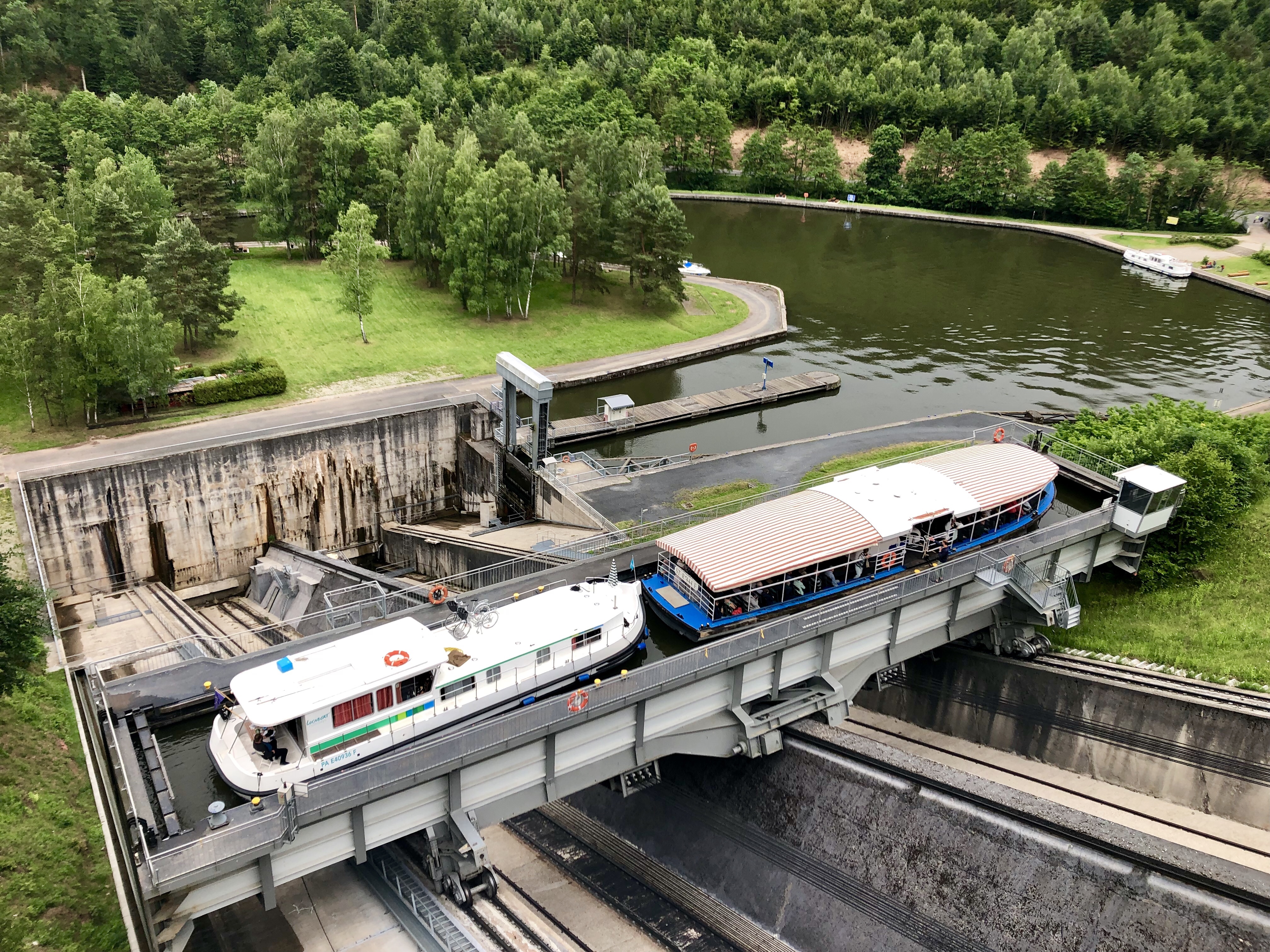 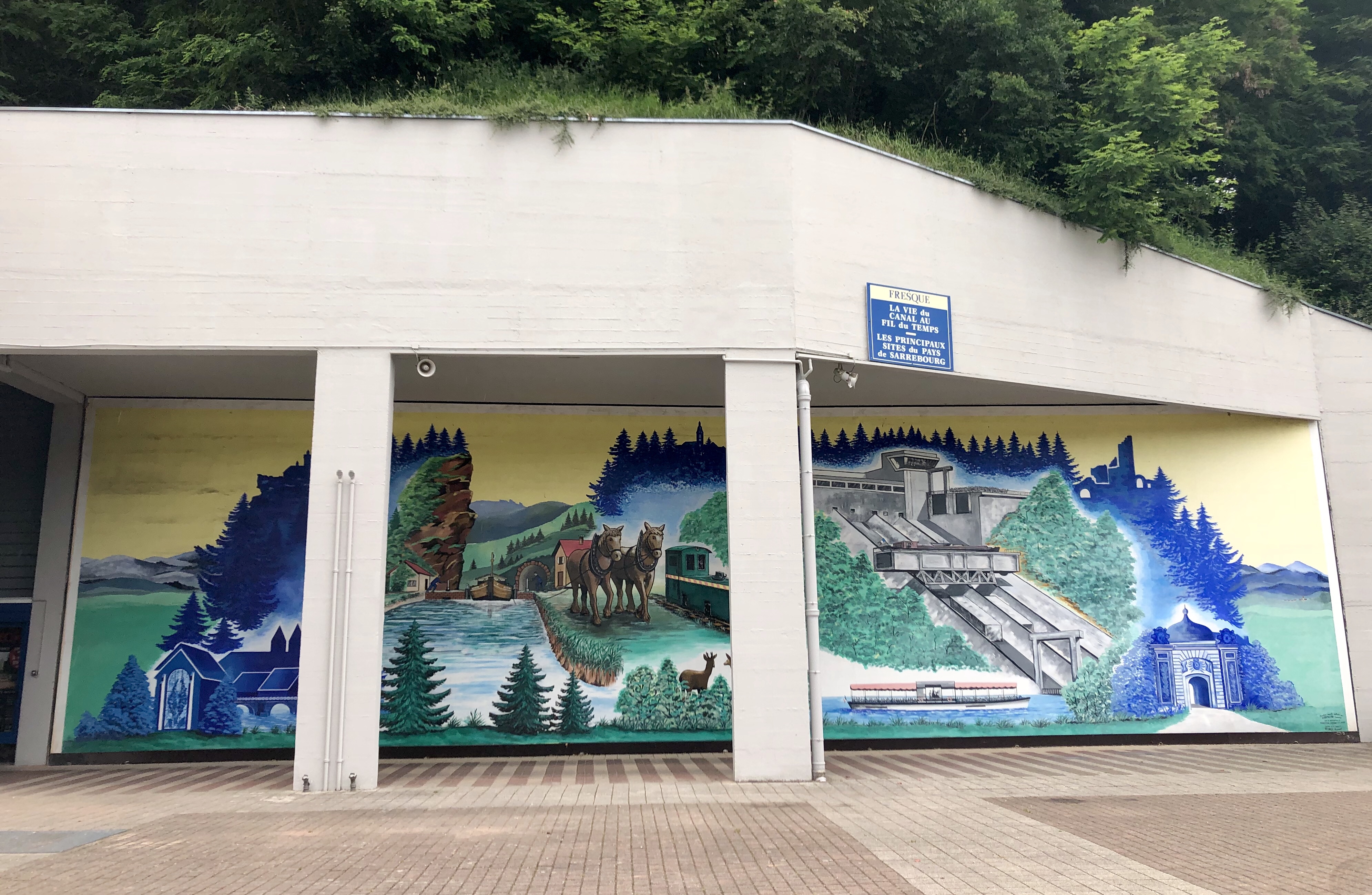 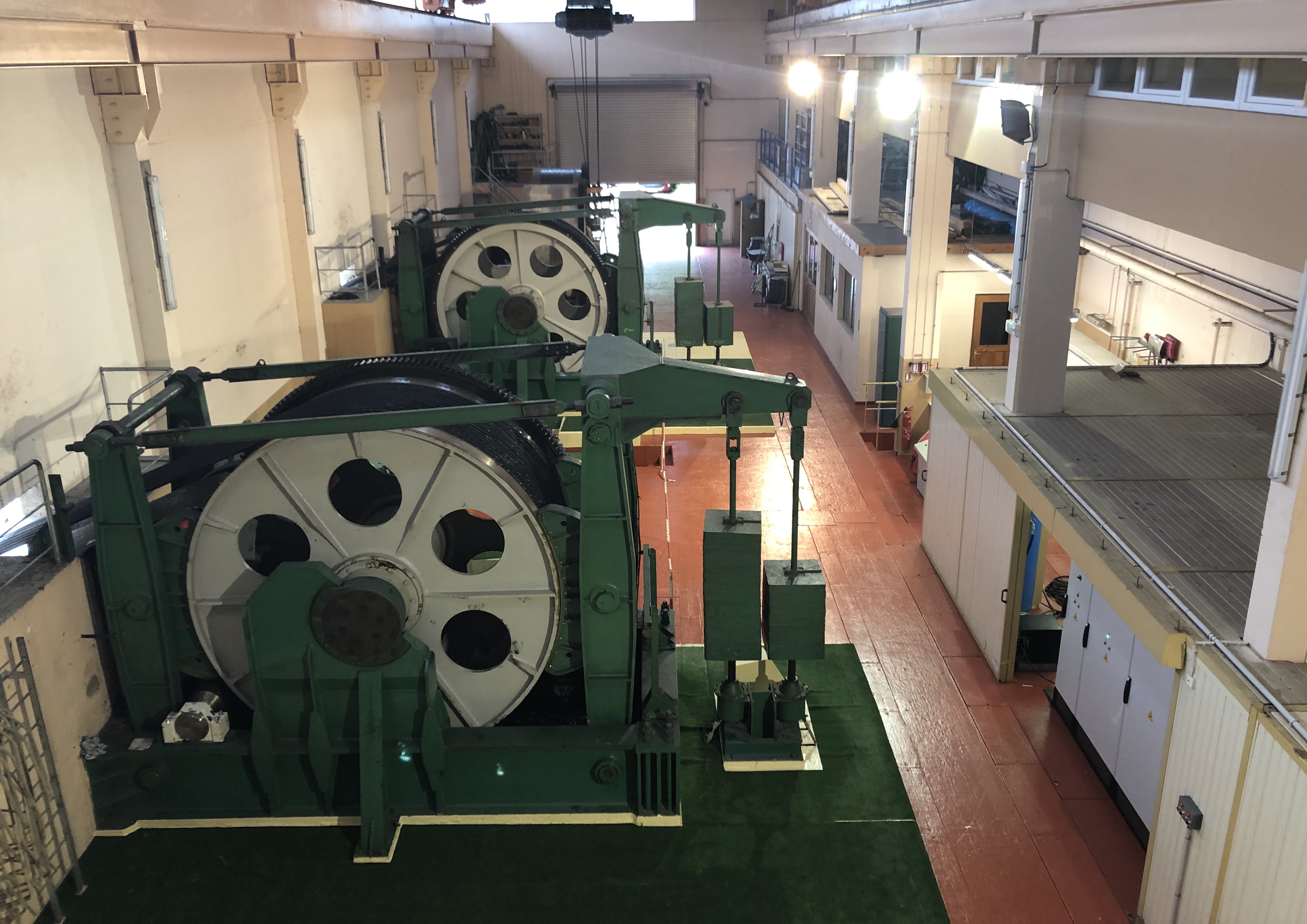 A few kilometers further along the canal is the 2,306m long Artzviller Tunnel, followed swiftly by the 475 meter long Niderviller Tunnel.

Each tunnel is one-way only, and operated on a traffic light system at each end. 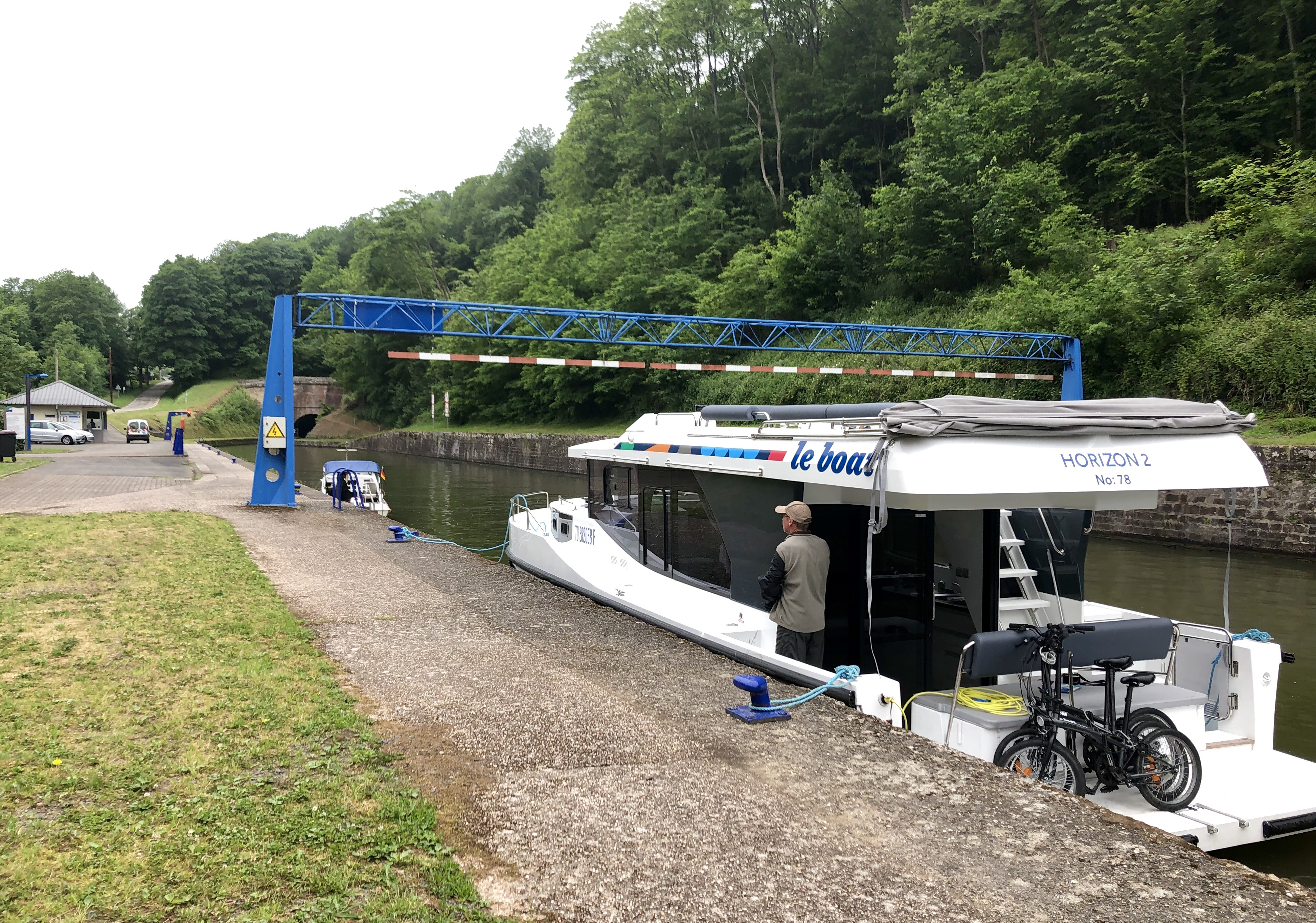 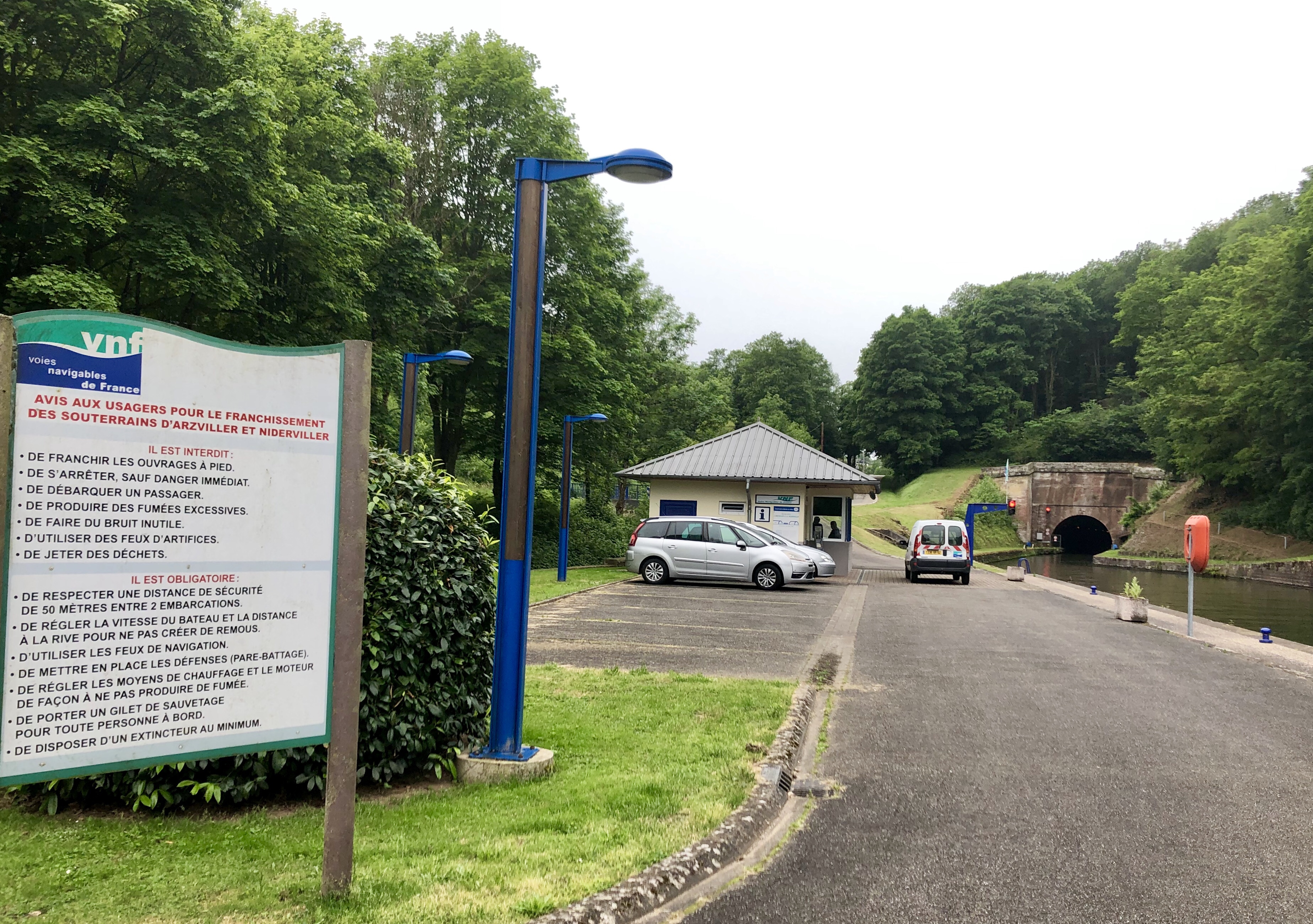 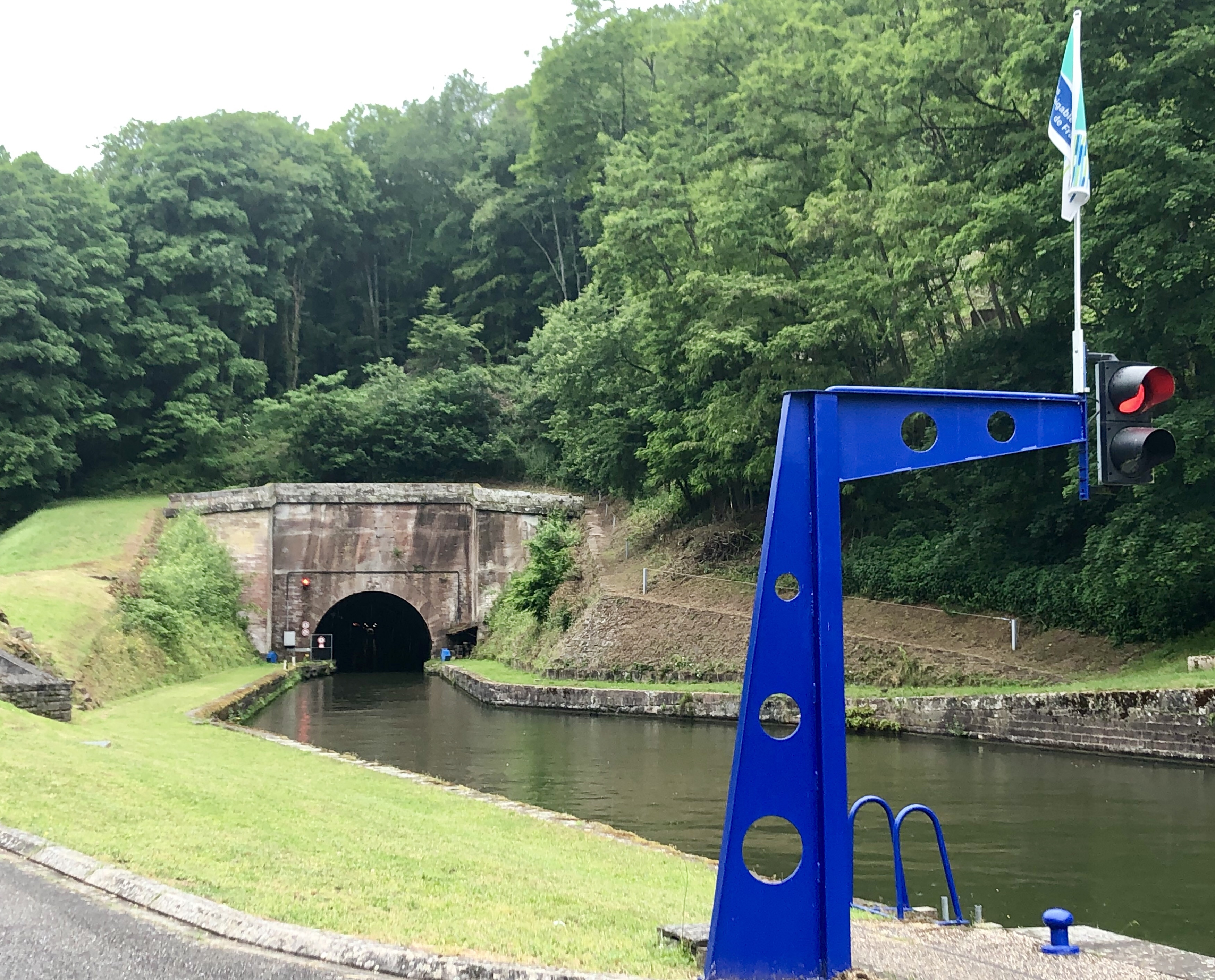 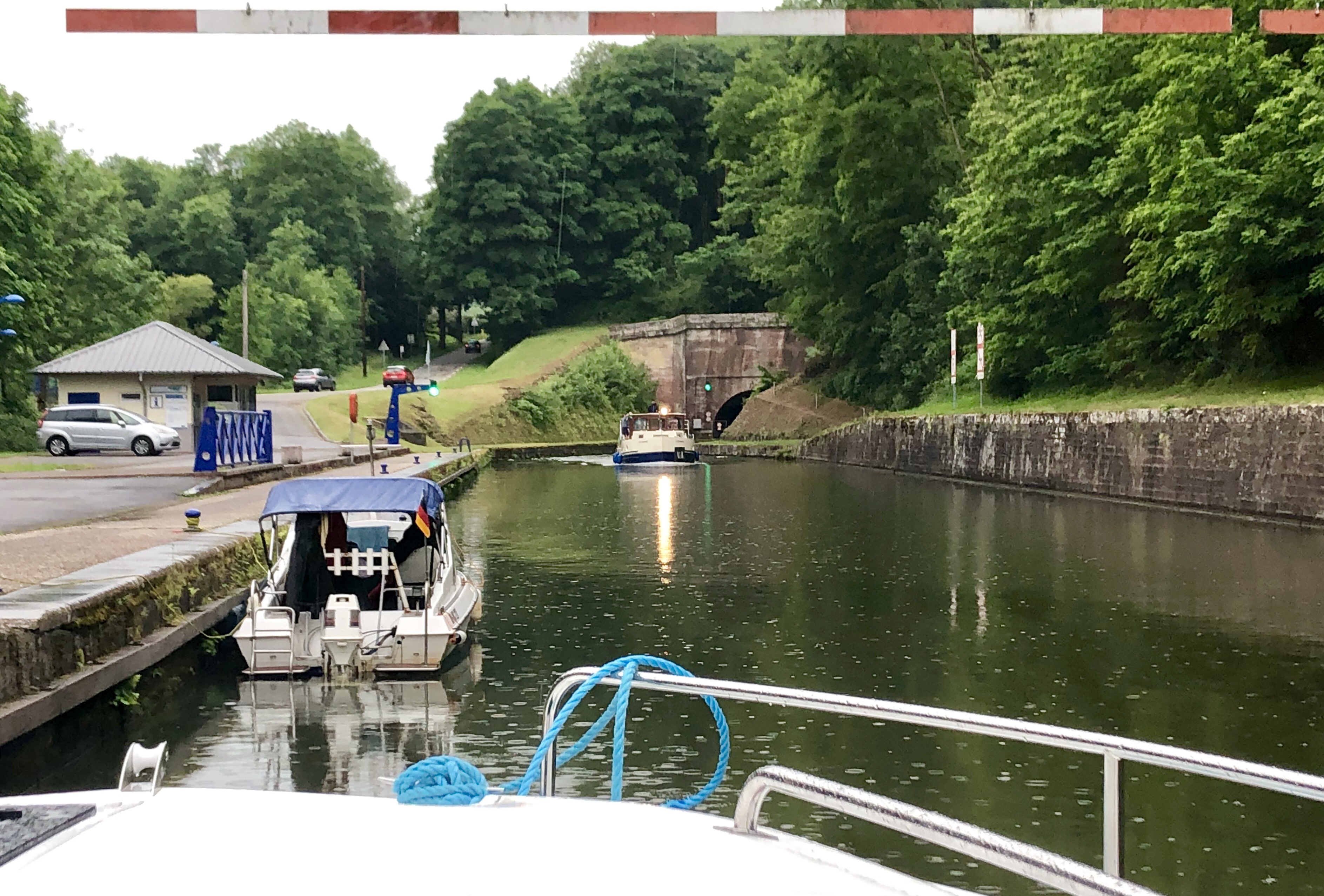 At neither the inclined plane or the tunnels did anyone approach us to give safety instructions. We got to the lane in the nick of time and cruised straight into the caisson. We’ve got written instructions on board that we’d read in advance, but I’d still have expected some form of verbal support too. I thought it was strange.

At the first tunnel I walked up to the VNF (Voies Navigables De France navigation cabin and asked http://www.vnf.fr/vnf/home.vnf?action=vnf) for written instructions in English. They eventually found some. Not rocket science of course, but if you’d never been in a tunnel by boat before they could be handy.

We waited about twenty minutes for a boat to come through before we could enter – followed by the tiny boat with three German men who’d somehow survived the rest of yesterday’s locks and the Inclined Plane!

I’d been a tad anxious about driving through a long tunnel in a wide ‘plastic’ boat but needn’t have worried. It was lit up the whole way through and plenty wide enough. I had no trouble at all. Phew! Even the steering controls (indoor of course) were lit up. Tres bon 😍 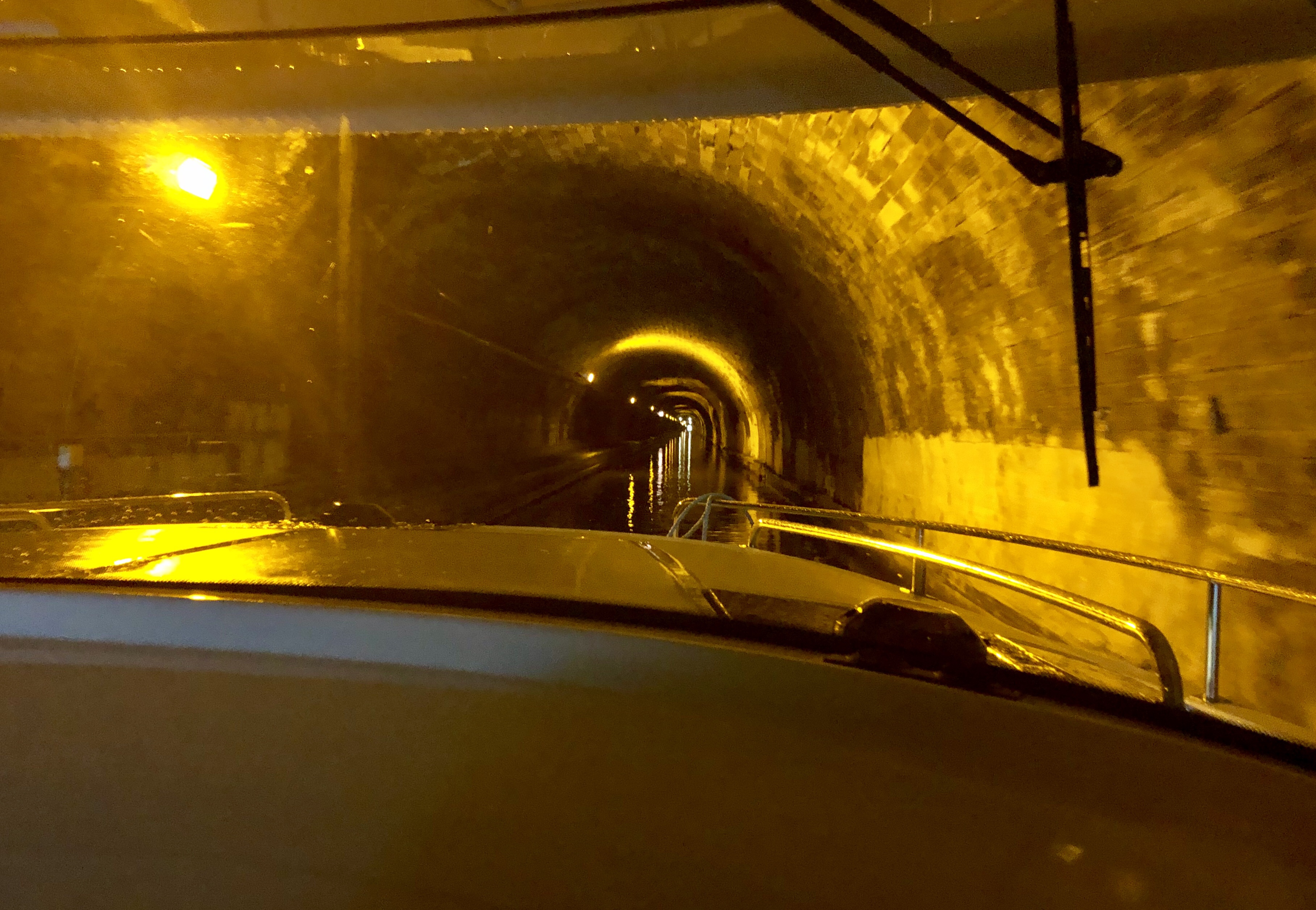 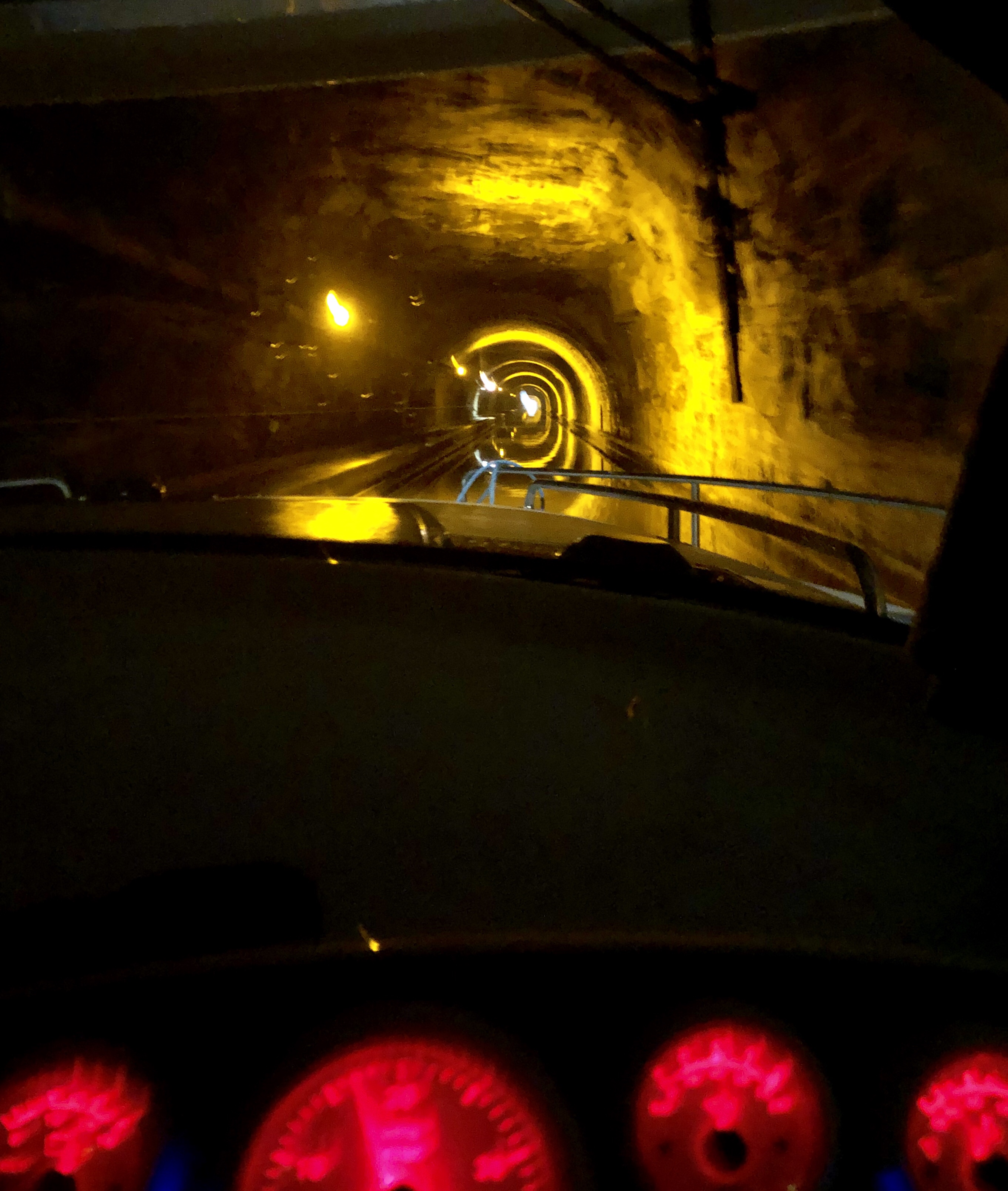 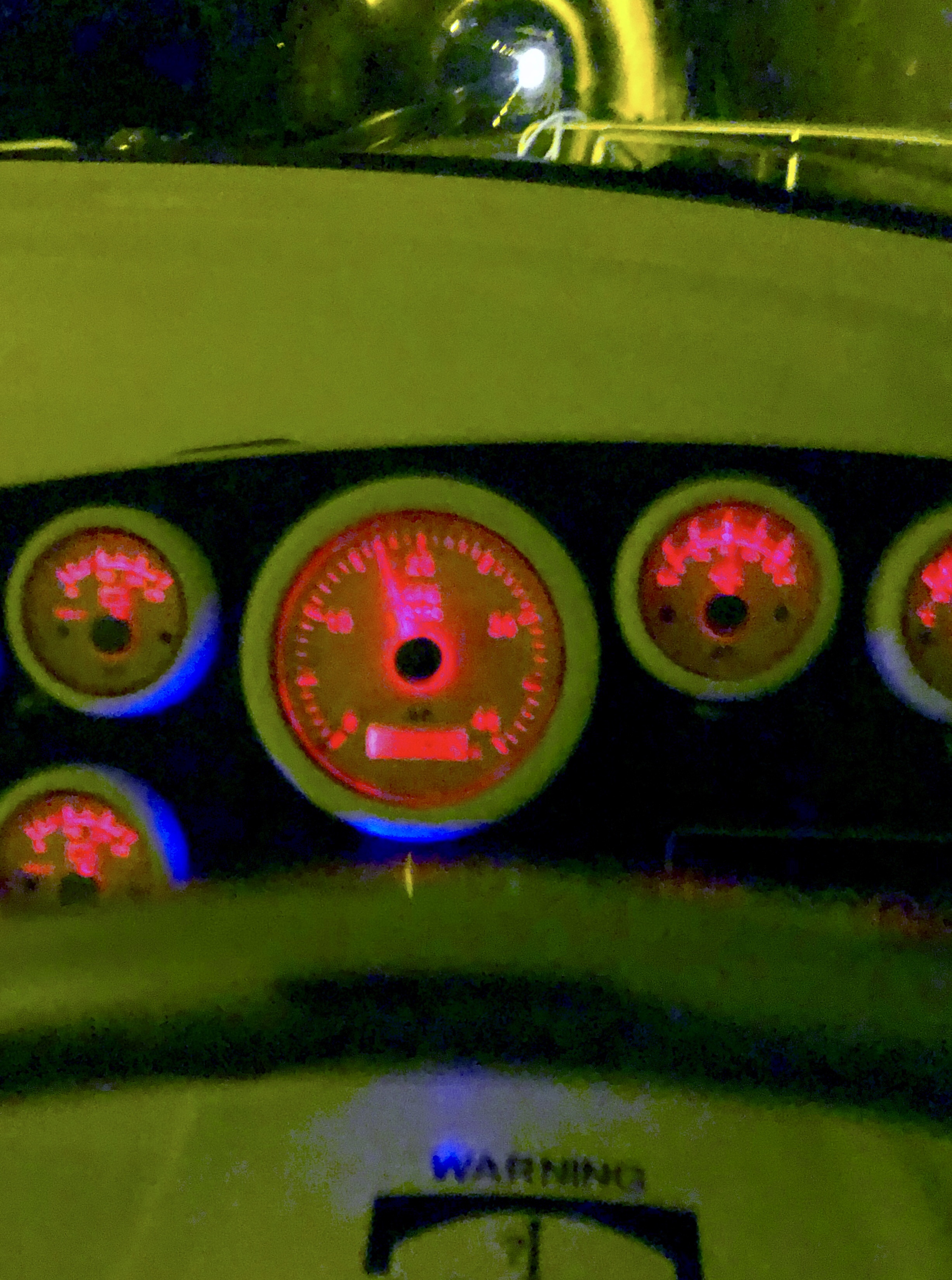 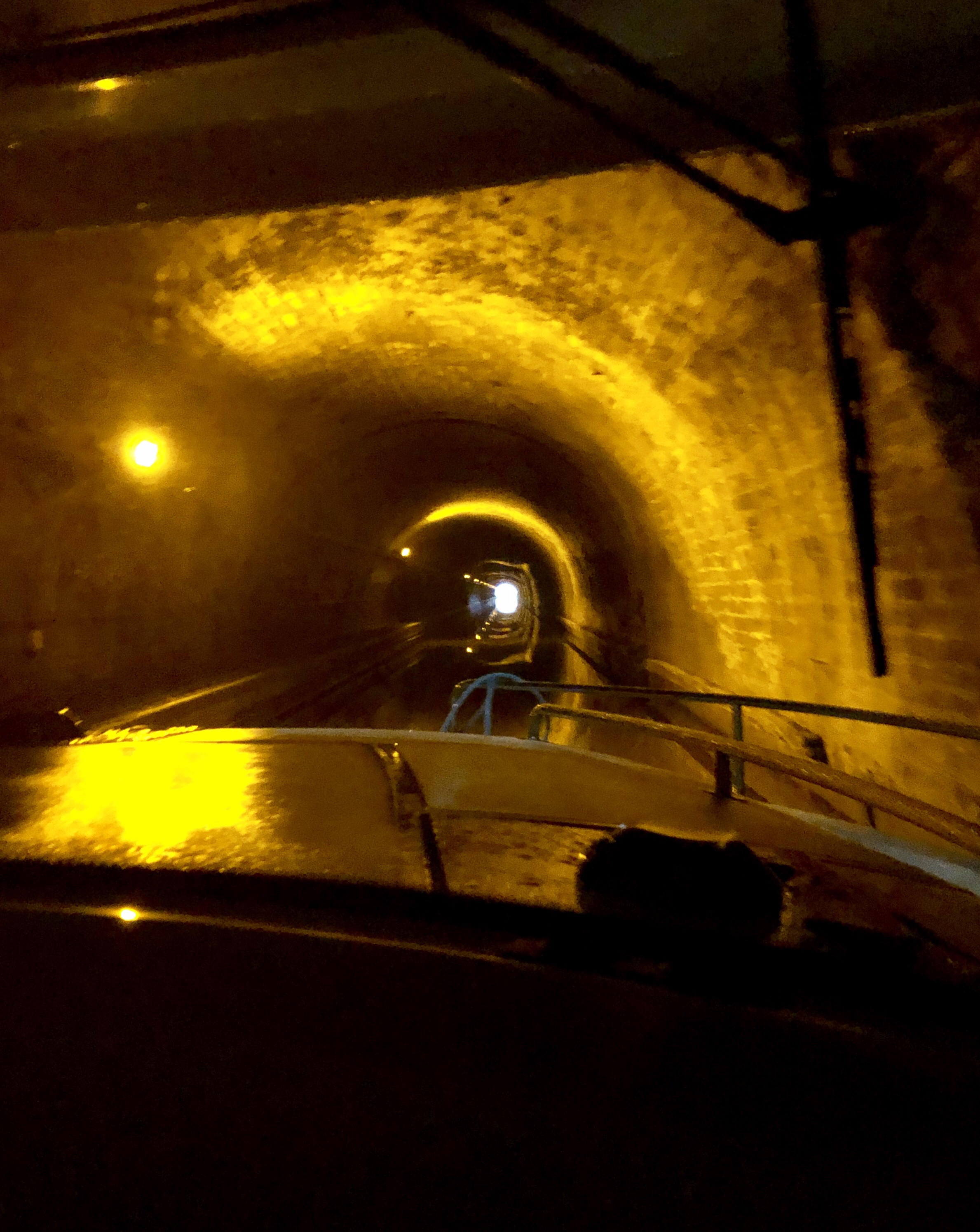 At the second tunnel, the lights were on green ready for us. From there we continued to Hesse as the weather today was miserable. Not what had been forecast at all. Thank goodness we made the most of the fun yesterday.

We hand the boat back to Le Boat here at Hesse at 9am tomorrow, then set off by taxi and two trains to Colmar where we’re staying for one night. We’ve heard that is a spectacular city too.

On Sunday morning we journey on to Venice via Basel and Milan, staying there for three nights. More canals! Venice. I never imagined I’d go there. It’s not been on my list of places to see. I’ve no doubt it’ll be amazing.

We heard from Barry this afternoon that he and Dickie have been on the Runcorn Arm of the Bridgewater Canal today. They were planning on doing the Anderton Boat Lift, but the River Weaver is in flood. He says they’ll check again tomorrow.

He was going to trade at Middlewich FAB, but decided it would be miserable on his own with a forecast of rain all weekend.

A great choice. He’ll have a fun weekend with his long-time friend who’s staying on board till Monday.

Thank you for being there Dickie 😊

3 thoughts on “Day Eleven – An Exciting, Albeit Unexpectedly Damp, Day”