On 2nd January 1978, I began my Registered General Nurse training. I remember it well. Mostly with fondness.

One of my overriding early memories is of a classroom in the Bromsgrove School of Nursing (no Nursing University Degree courses in those days). I recall a large group of young and impressionable student nurses in a classroom, being shown a range of pots of urine and faeces (pooh to those unaware of the term!), to display the diversity of conditions/colours/smells/consistencies. I was at once both mortified and fascinated! So began a 35-year ‘career’ in nursing and midwifery, encompassing the joys of living well, of operations and childbirth, and a fair share of pain, trauma and death.

A personal experience of a ‘good’ death

However, although I’d nursed (and ‘midwifed’?) many adults and babies at the end of their lives, I’m not sure I had REALLY experienced death until I was present at the gentle and love-filled death of my dear dad, at 0904hrs on 9th February 2015. Exactly four years ago today.

I’d known the end of his life would come for many years. As it will come to us all. Having been born in 1920 dad had lived a long and happy life. I just hoped his demise didn’t come too soon, or whilst I was away.

After emigrating to New Zealand in January 2005, I often wondered during the following eight years if one day I’d receive a call from ‘home’ to say he’d died suddenly from a stroke, or a car accident.

The latter was more likely on reflection. Barry and I experienced a death-defying trip with dad driving and us seated in the back in March 2013, unaware he could barely see (as yet undiagnosed bilateral cataracts), and his spatial awareness was lessening (vascular dementia and Alzheimer’s all rolled into one but once again, we had little knowledge of the cause of his altered mental state at that time). We refused to be in the car with him and mum ever again, and after a few weeks thankfully managed to prevent him driving before he killed himself and/or others. Though this only happened when a male doctor told him it was no longer safe for him to drive. Someone needs to do this for a member of the Royal Family asap!

Dad didn’t die suddenly. He withered away over the following two years. The dreaded disease Dementia diminished and mostly destroyed the strong, funny, witty, caring man my mum had been with since 1954, and my three sisters and I had known all our lives. Saturday 9th February 2019, marks four years since his death. 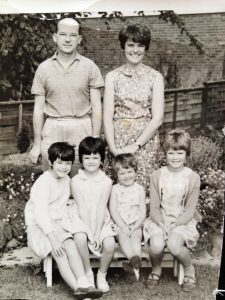 The young Walshes circa 1967 Walmley 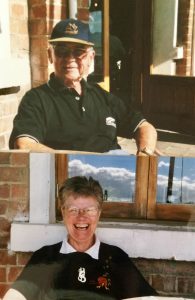 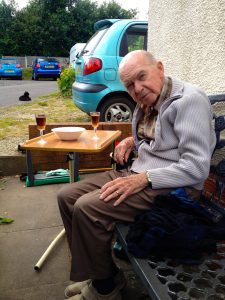 Dad enjoying a sherry outside their Park Home in 2014

During the preceding years, I’d soaked up a number of seminal works such as Elizabeth Kubler Ross ‘On Death and Dying‘, and Jennifer Worth’s ‘In the Midst of Life‘. I became fascinated delving into our relationship with the only other certainty of life apart from birth – we will ALL one day die, however much wealth we possess or accumulate along the way. I enjoy The Death Hangout too – excellently put together Podcast interviews with a range of fascinating folk, by Keith and Olivier. It’s really not morbid. More facing reality and staring the Grim Reaper boldly in the face …

As a midwife, I knew birth and death had profound similarities, each progressing through ‘natural’ stages if allowed to physiologically. Of course it could also occur dramatically, and suddenly. I also knew that mankind, in the quest for progress, far too frequently interfered with this process. Too often to the detriment of the person and outcome.

I used the knowledge gained from many decades of experiences to guide my dad and family through the quagmire of the twentieth century health service, as dad was admitted to an acute hospital two months prior to his eventual demise, shortly before his 95th birthday. Some of the scenes we witnessed appalled me at the lack of care and compassion of ‘professionals’ towards supporting people to have a ‘good’ death. I was determined to protect my father from such ministrations if at all possible.

He did eventually die, from pneumonia, in a wonderful care home in Worcester; pain-free. Calmly, gently, and surrounded by his wife and four daughters, having been visited in the previous days by some of his eleven grandchildren and eight great-grandchildren. But it was a planned experience I believe few people appreciate or are able to embrace.

Joining ‘Dying Matters‘ some years ago, I read their newsletters avidly. Mum was also living with the horrible effects of Alzheimer’s Disease, until her unexpected death on 14th May 2018. Dying Matters were promoting a book written by a distinguished Palliative Care doctor named Kathryn Mannix earlier that year. A summary of the contents was available by pdf, and I soon became engrossed – and felt compelled to buy and read it to add to my knowledge bank. I felt sure it would help for the times in future when loved ones needed support. Maybe even for myself. Hopefully neither too soon!

The book was extremely well written from beginning to end. Often humorous, always insightful; stories of death and dying mostly with dignity and as much comfort as possible in the circumstances. The descriptions of a ‘normal’ pathway to death are profound and excellently outlined.

I wish someone had been there to walk us through what to expect during dad’s final days. I can totally relate to the way it’s portrayed by Kathryn. Sadly we didn’t get a chance to support mum, she died alone. We can only hope she didn’t suffer – and at least was spared the indignity of losing her faculties too much.

I’d highly commend this book to everyone – for your selves and your loved ones. It’s time we lived ‘With the End in Mind’ each day in order to improve the quality of our precious gift of life.

Note – clicking on the link to buy the book means we receive a small % of the sale as an ‘Affiliate’ of Amazon.