The end of our seven days a week working feels reachable. In less than three weeks we’ll have completed our second Calendar Club season as self-employed operators, and be once again relishing time on board Areandare. The poor boat has been rather neglected since we began on 11th October!

Unsurprisingly I haven’t found much opportunity to post for a few weeks, and the commitment is still full-on. More so in fact, as we’re experiencing our busiest time in the lead-up to Christmas as people get into cray gift buying mode – and then the Boxing Day sale will begin. We’re very much looking forward to our two days off together on 25th December, and 1st January. We’ll need to recharge our batteries before the closedown on 7th January. It’s such a massive day packing up whatever stock remains and the fixtures, loading it onto the pallets for the truck to take back to the warehouse at Calendar Club HQ in Exeter.

On Sunday 25th November, the Lichfield Christmas lights were switched-on, which brought the crowds into Lichfield. It was wonderful to be so close to the festivities at the Market Square this year.

A few weeks ago the incredibly talented Matt Bond honoured me by bringing his newly released CD into the shop, asking if I wanted to be the first to buy a copy. Why of course! We grabbed a photo for Facebook and Twitter. On Sunday 23rd December, we have tickets to watch and listen in awe to Matt singing at The Guildhall. He’s recently scored a lead role in a West End production of Mob Wife from 24-26 January 2019 at The Cockpit Theatre in London.. Go Matt! 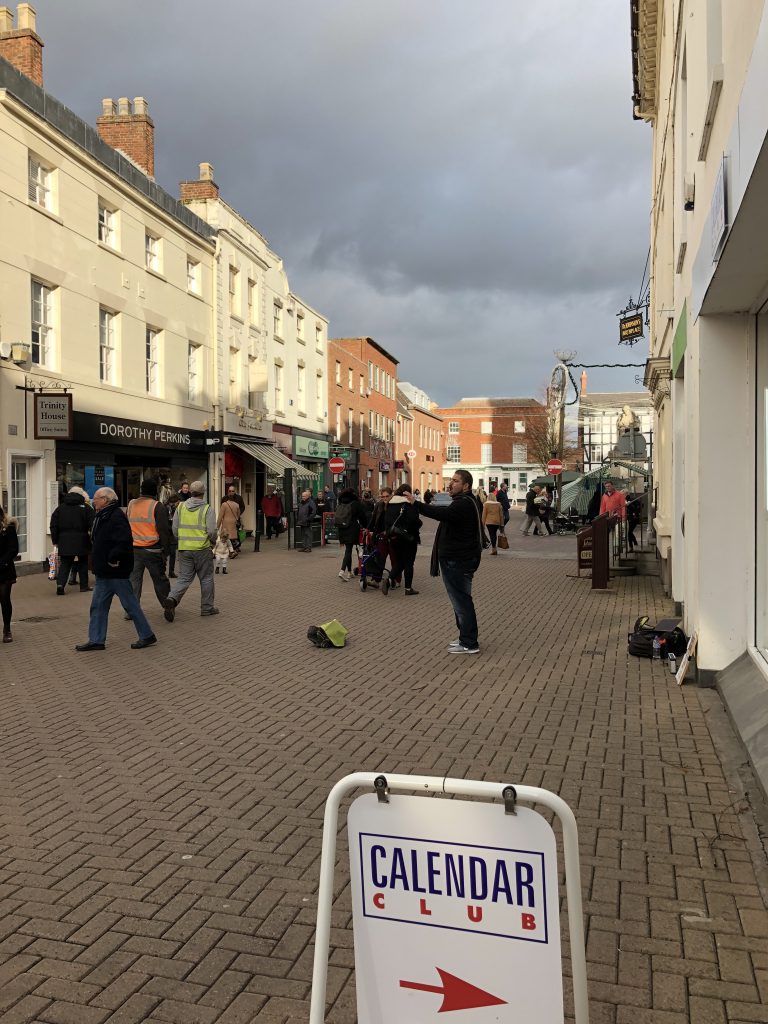 We’ve had a few not such welcome people outside the shop too. Like this Police van which more-or-less blocked our window from view one weekend! Barry bravely asked them to move on, but they weren’t terribly receptive! He moved our Sandwich Board in the hope of distracting passers by our way. Undoubtedly this intrusions sadly adversely affected our sales that day. 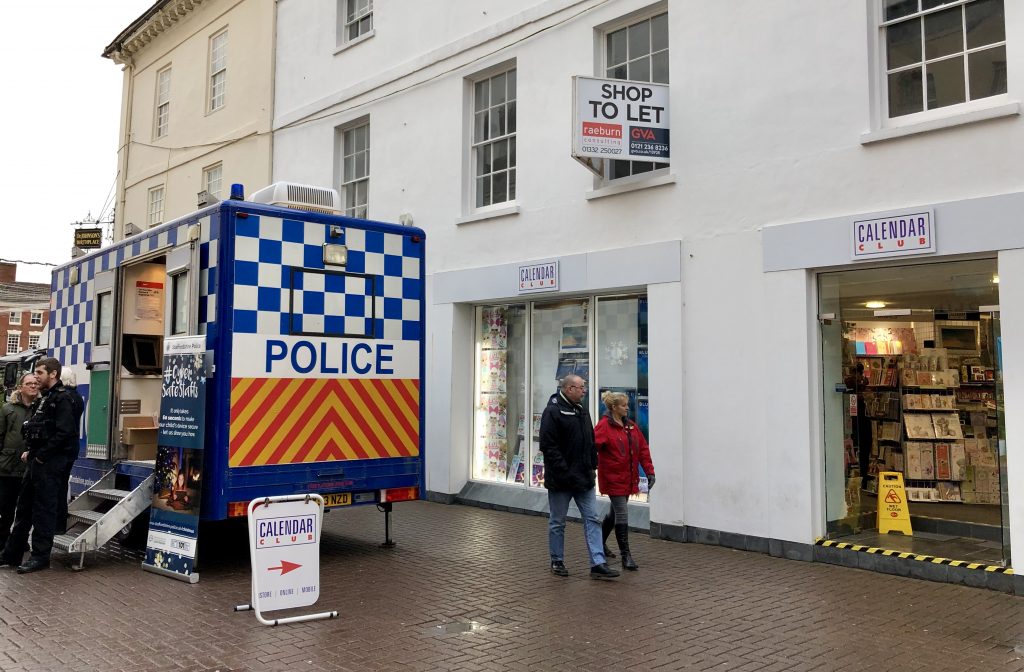 Each week we aim to take turns to have a bit of a lie-in. A couple of weeks ago, on my day, I arrived at the shop and Barry excitedly said he had something to show me. He was talking to a customer at the time. “Can you spot anything on this calendar?” he asked …

The photo would’ve been taken at least 18 months ago, as we ‘exchanged’ the folding bike featured on the stern for a rainbow rag-rug at a floating market in Fradley around May 2017!

On 6th December Barry celebrated the 63rd anniversary of his birth – his boss generously gave him a day off! The lovely Fred from Sheffield surprised us the day before, bringing a few gifts. Then our Territorial Manager Steve turned up on the day, at the shop, so we invited him out to dinner with us at the George and Dragon in Hopwas.

We’ve welcomed a couple of surprise visitors to the shop from the boating world recently. James and Debbie from The Pen Maker’s Boat, and Bob Williams the Director of the Lichfield and Hatherton Canals Restoration Trust (LHCRT), whose calendar is our chosen charity one this year.

That’s about it for now, just to keep you all up to date.

This evening we’re off to the Cathedral Illuminated, with Helen and Andy Tidy so you never know there may be photos of that to follow! We missed this event last year, as we both had flu.

Have a wonderful festive season everyone, thank you for being here with us on our journeys, and we’ll ‘see’ you in 2019 …