I have to admit something I suspect won’t surprise anyone reading. In matters rugby related, my allegiance isn’t with the country of my birth. And despite Barry loving many things about life in the UK, when it comes to supporting The All Blacks, he switches back too.

Last Saturday New Zealand played England in the ‘Autumn Internationals’. Don’t be too impressed I know that, I had to look it up! The kiwis won by a narrow margin, after a disallowed England try. And also (apparently), because they chose lineouts, rather than kickable penalties. Again, I read that (in The Guardian). I seriously know little about the intricate rules of rugby! Though I do enjoy watching the All Blacks when I get the chance. It seems they’ll be playing Ireland this Saturday – a game Barry definitely won’t be watching, as he’ll be manning the Calendar Club shop alone. I’ll be travelling up to my elder daughter’s for a few days.

Barry had discovered the match was being shown at The Walkabout pub in Lichfield, a short distance from the shop, and was given a ‘pass’ out by me just after 2pm. He looked like the cat that got the cream as he skipped joyfully out. Little did he know he’d soon have even more reason to smile.

Our friends Gav and Helen are running two Calendar Club outlets in Leeds this year, and doing very well. Gav had messaged mid-week to say he expected Barry would be watching the match, and how envious he was.

About an hour after Barry left me, I received the following photo via WattsApp … 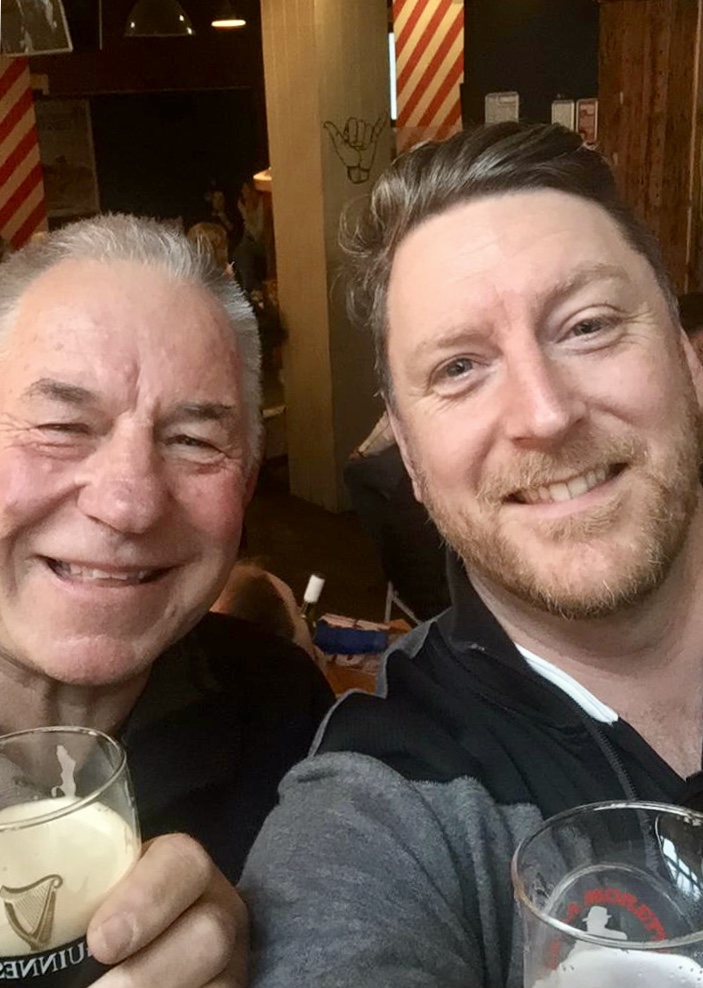 Barry was sitting on a stool downstairs at The Walkabout pub, when Gav crept up and surprised him. Barry assumed I’d organised it. When I saw the above photo I imagined he had. In fact neither of us had prior knowledge. It was all down to Gav’s cunning planning (with Helen’s loving understanding and support).

You’d never know there’s almost a quarter of a century age difference between this pair, when they get together the shared giggling at the slightest opportunity is infectious. I joined them after the match, once I’d closed the shop … 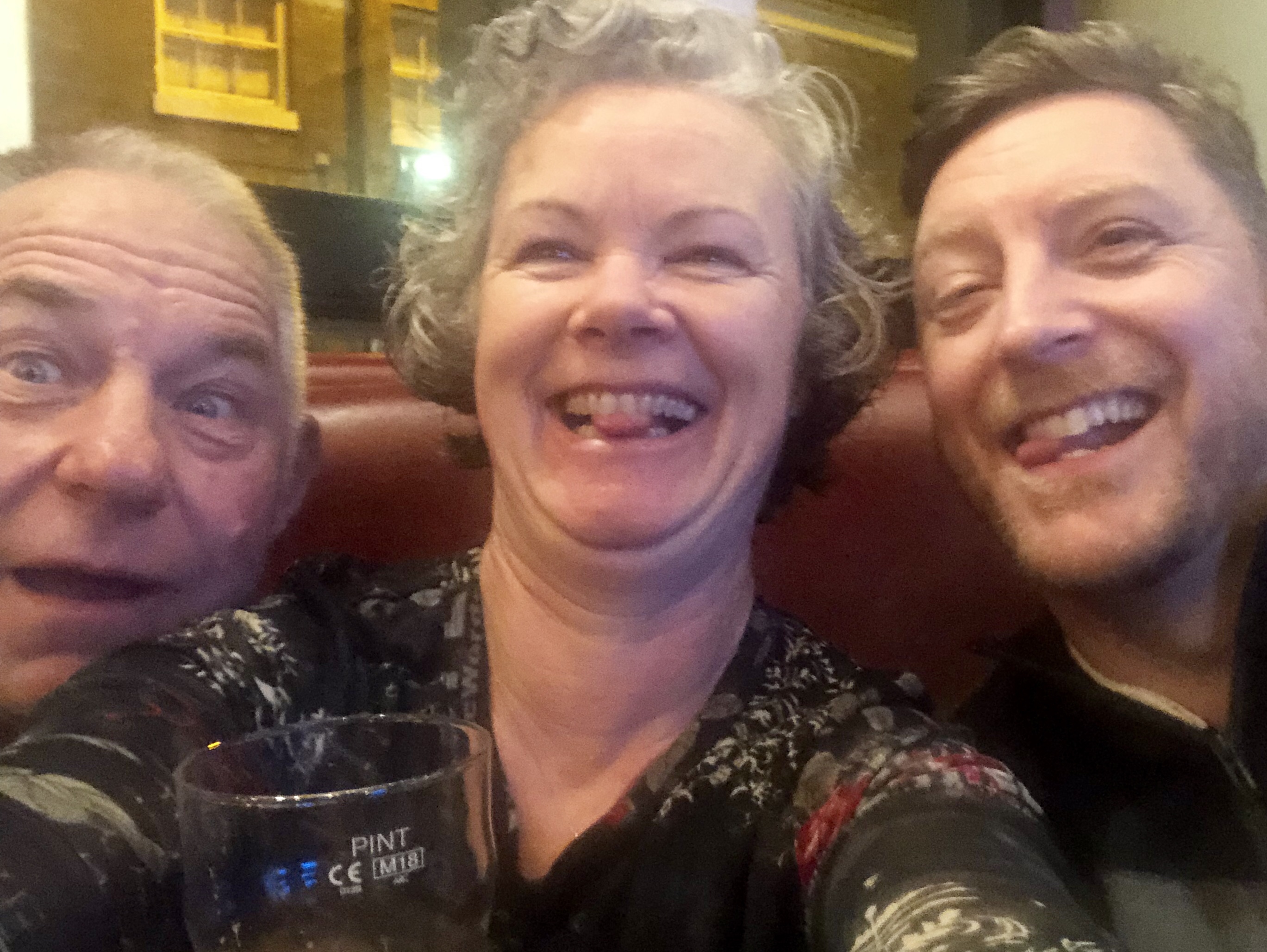 Due to the lack of public transport on a Sunday, we’ve been staying at my elder sister’s house in Lichfield on Saturday nights. Last Saturday Kath had an unexpected additional guest to accommodate. We both loved seeing Gav, and I suspect Kath was rather enamoured by the frivolity too.

Gav and Helen’s second Calendar Club outlet opens this week, so he’s unlikely to get any more days off until Christmas Day.

He came into Lichfield with us on Sunday morning, and stayed around for a couple of hours. It was great to share experiences as self-employed operators. One we won’t be taking up is singing like Elvis to increase sales –  Gav’s a brilliant Elvis impersonator, and has the women swooning in Leeds when they buy one of his popular calendars! 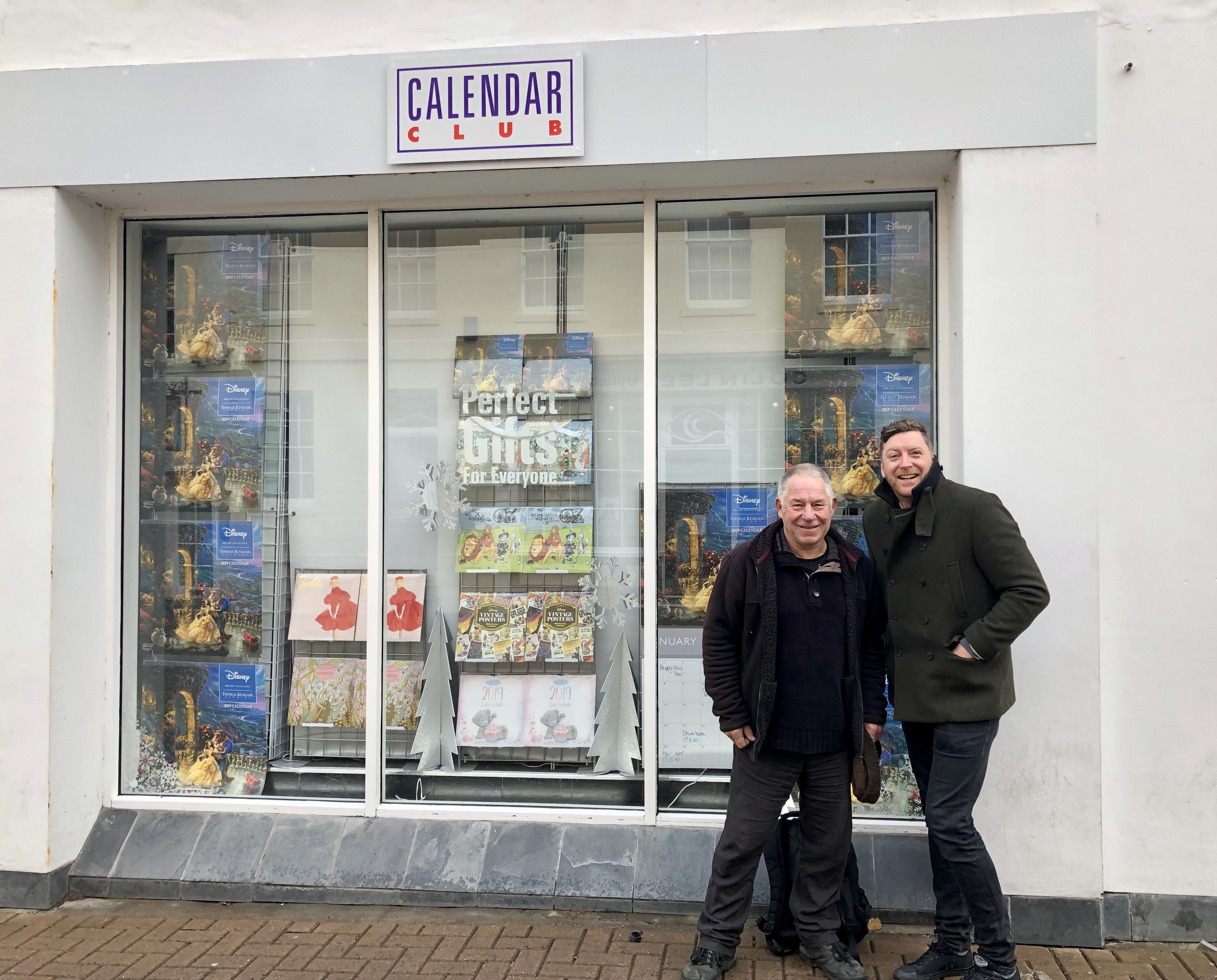 Barry and Gav outside our Market Street shop 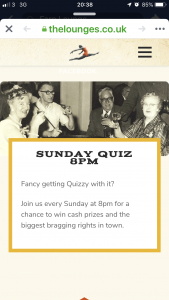 Having not been on the boat since Saturday morning, we’d arranged to meet up with a friend on Sunday evening at the Faro Lounge opposite our shop. Barry had seen a ‘Quiz Night’ advertised there for Sunday evenings, so we thought we’d treat ourselves to dinner and participate in it.

Barry asked the friendly waitress if it was on, who said she’d only started that night so wasn’t sure.

Barry remained convinced it would happen. Eventually, once 8pm had come and gone with no sign of a quiz happening, he asked the young barman. He nonchalantly said it hadn’t been on for a couple of months as there wasn’t sufficient interest. We felt rather disgruntled to say the least. The ‘quiz night ‘continues to be advertised on their website (despite leaving a comment on their Facebook page about our disappointment!), and marketed as plain as day on the sandwich board outside the premises.

We suspect they may be getting a few customers in under false pretences. It certainly won’t be us in future …

To cap it off, we got back to Areandare late, about half past ten last night, and the often asked question “Is it cold on a narrowboat in winter” this time was a definite YES! We could’ve met our friend on the boat earlier in the evening, and been warm. We’ll know next time.

At the end of the day it’s all ‘small stuff’. All-in-all life is treating us both extremely well, and we feel extremely fortunate to be healthy and happy. Long may it continue.

8 thoughts on “Walkabout From Leeds to Lichfield”