The Home Brew Boat first began trading at canal-related festivals in Droitwich April 2014. Over the following three years the cruising plan was primarily based around planned events from April through to October. This year we decided to make considerable changes. We felt our floating lives were becoming ‘same old’, and we were at risk of going back down the negative (as we see it) spiral of a ‘work routine’. The very idea!

We did, however, decide we’d return to familiar, friendly and fun festivals in the month of September –  for a variety of personal and business reasons, to trade Barry’s wares.

This iconic and incredibly well-supported-locally weekend at Netherton, near Dudley, is a favourite. It’s ably and efficiently organised annually by the Worcester, Birmingham and Droitwich Canals Society, as is St Richard’s in Droitwich, they also manage the Parkhead Festival every two years. The commitment and enthusiasm shown by the volunteers to produce these trading and networking opportunities is incredible, and we’re very grateful to their dedication.

Our trading spot, as we’re regulars, is next to Helen and Andy on the Jam Butty/Wandr’ing Bark, near the Bumble Hole Nature Reserve café. Due to our respective different journeys in 2018, it was the first time we’ve had opportunity to spend time with our dear friends this year. So we made the most of it! Of course the obligatory game of six-handed-rummy was enjoyed, and lots of catch up chatting.

We also met two new terrific traders who were the other side of our boat sandwich. Kath and Annamarie began living on their narrowboat in April of this year. We let them know about booking in, and the nearest supermarket (Aldi of course, our favourite), though they’d already sussed that one out. What we didn’t realise until well into the weekend was that we were in the company of two famous Vloggers. Not only is Annamarie an extraordinary artist, together they are Social Media Whiz-wives! Check out their website, Facebook pages, and Youtube Channels. They really do have all their bases cleverly covered.

As an extra added bonus, we’ve since found a few things in common and been able to share accumulated knowledge between us which has been brilliant. I have no doubt our paths will cross again in 2019. 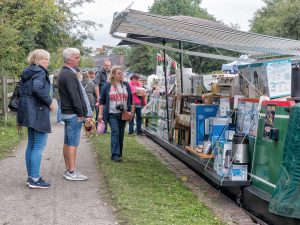 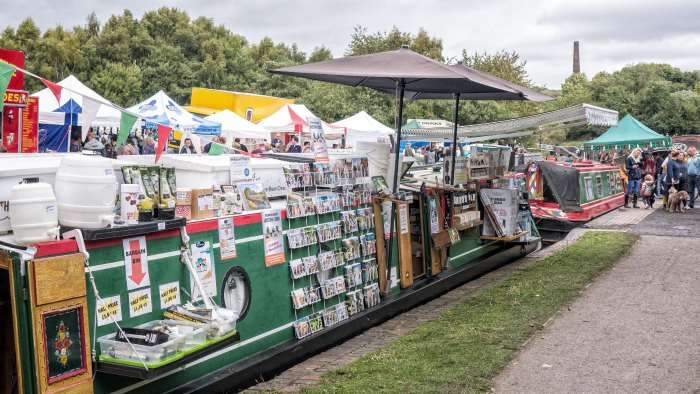 All set up ready for the inevitable crowds 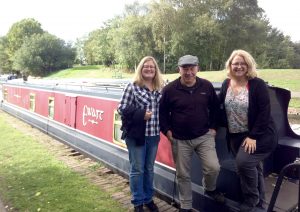 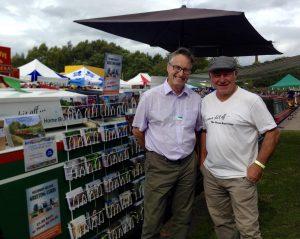 With the CRT CEO Richard Parry 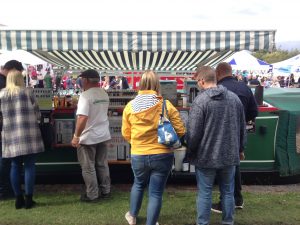 Barry and I took our new buddies to the beer tent on Friday night, for a boatman’s supper (maybe it should be boat ‘person’s’ supper?), and a pint or two. There was also a solo singer, delightful, and of course the Shady Band, a group of talented boaters. Most entertaining – despite an unexpected short break when the electrics blew a fuse!

The footfall at the BCBF weekend is always amazing – whatever the weather. We were happy to welcome Richard Parry, the CEO of the Canal and River Trust, who paid us a visit on the Saturday. We’ve missed seeing him, as it’s always a pleasure to us to talk with him and catch up on all manner of fascinating things.

One of the things I loved about this weekend was being able to wear my ‘Get Your Kit Off …’ t-shirts and sell alongside Barry on the Saturday. Most unusual for me, as I’m usually Facepainting elsewhere. Barry took the opportunity to sell-off a number of lines, in readiness for his new business venture. Which worked well at BCBF and the following two weekends. I shall say no more until he’s ready to share how he’s taking The Home Brew Boat forward …

This one’s a smaller event, though it doesn’t detract any from it’s niceness. It was Helen and Andy’s inaugural Tipton trading and I think they rather enjoyed it. We had our grandson on board over the weekend which curtailed me from being Barry’s side-kick. It did allow me to mingle much more with the traders in the park – and spend some of our takings supporting them! 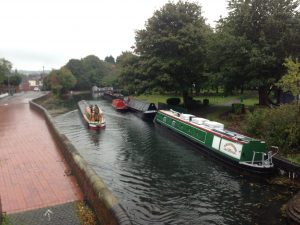 Our corner mooring by the park 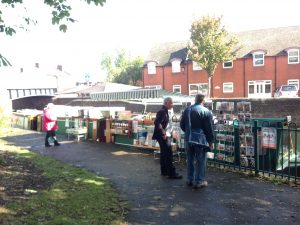 Tipton is a much-maligned town. Sadly there’s a number of local shops closed down, so it doesn’t look as though it’s prospering. There’s photos in The Fountain Inn (great pub!) showing what it looked in it’s heyday. 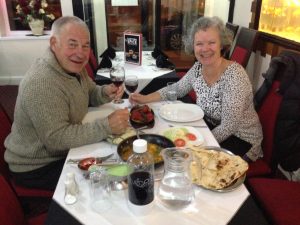 In between Tipton and Parkhead, 26th September, we happily remembered the ninth anniversary of our English wedding – a Humanist service held on the roof of our previous narrowboat Northern Pride. There’s sparse choice of eating establishments in the area – which mattered not a jot. As Eastern Spice Balti, round the corner from our mooring, was perfectly splendid. Fabulous service, delicious food, and incredibly reasonably priced.

This was our third bi-annual gathering here, along with Helen and Andy. This time however the trade boats were grouped in the side arm at the top of the locks, rather than on the canal heading towards Dudley Tunnel.

It was my 59th birthday on Friday 28th September, given a choice it’s unlikely Parkhead would feature on my favourite places to spend the anniversary of my birth! However … Helen and Andy treated us to a meal at Ma Pardoe’s, following which we partook of a drink or two in the beer tent. Certainly not a bad way to celebrate entering my 60th year.

Another new meeting of fellow traders occurred too. Barry had chatted to Paul and Dave on ‘The Pizza Boat’ aka ‘Baked on Board‘ at Tipton, but I’d been too busy with our grandson to do much socialising that weekend! We’re told by many they make mighty fine sourdough pizzas. Shamefully we never got to taste one. Next time we see them we most certainly shall … 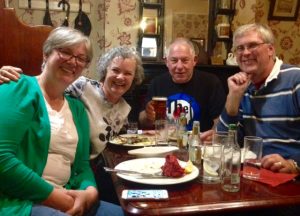 Birthday meal at The Swan 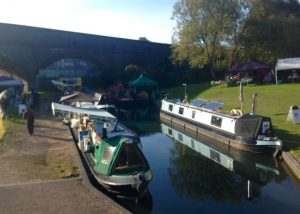 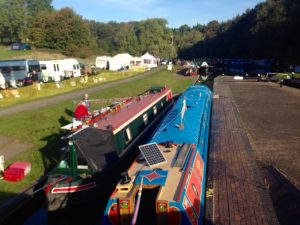 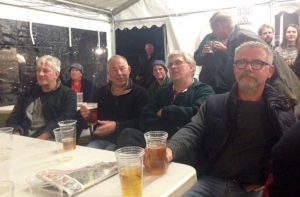 The boys in the beer tent Saturday night

We also took the opportunity to get a ‘head and shoulders’ shot of us both by Andy. I rarely wear make-up, or get ‘dressed-up’, so it seemed opportune. We rather like it – a couple of silver surfers! 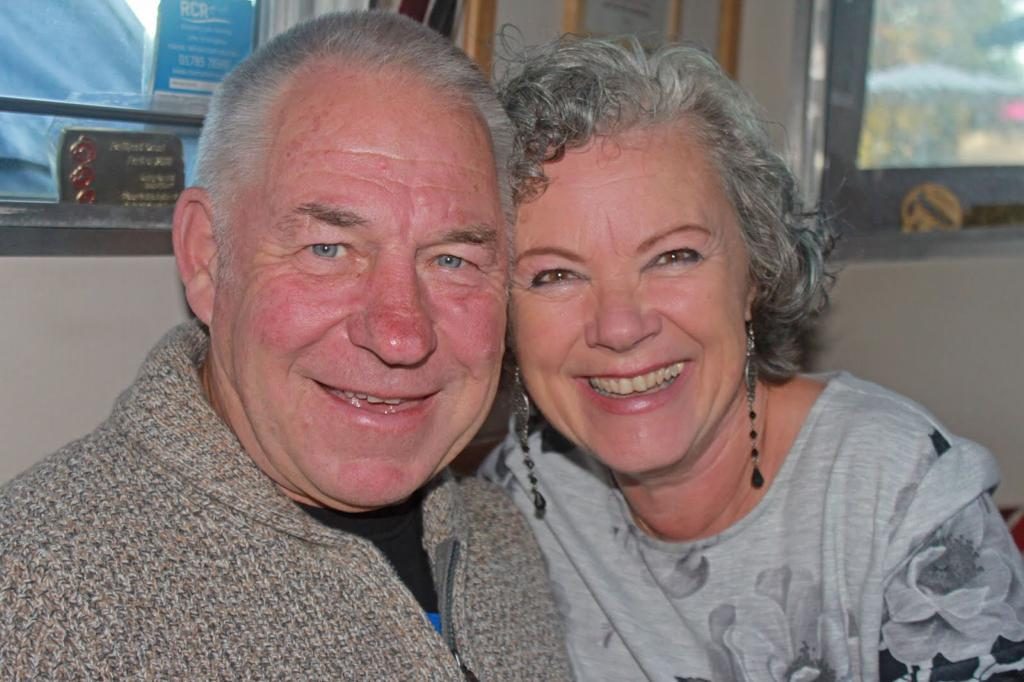 Unfortunately the footfall over the weekend wasn’t brilliant on our final festival. Despite that the weekend was extremely enjoyable – I even got to experience a trip on the Dudley Tunnel experience and try out a spot of legging, as well as watching the infamous ‘Duck Race’ debacle between the locks. Smashing. 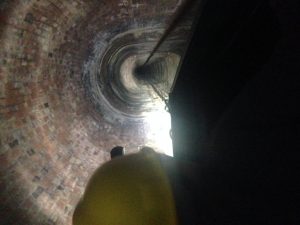 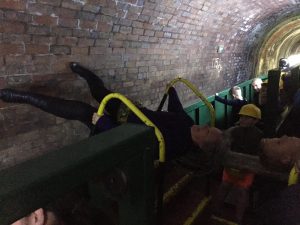 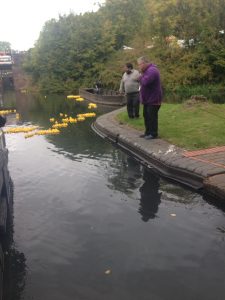 A whirl-wind of fantastic festivals, family and friends for September.

For the third year running our autumn/winter income earning opportunity is with the excellent company of Calendar Club UK.  It’ll be our second season in the cathedral city of Lichfield. We’ve experienced a quite stressful few weeks while we’ve been searching and subsequently waiting for confirmation of a suitable a store, but it’s all coming to fruition this week. 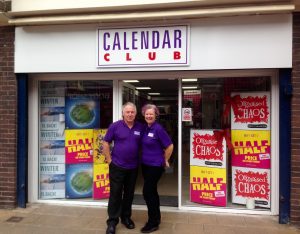 We start to build our shop on Thursday 11th October, and if all goes smoothly we’ll open on Saturday 13th. It’s in a different location to last year’s Three Spires shop, and we’re confident this one will be in an even better place for people to pop on and buy their essential time-management-tools..

The next post will provide more details on this year’s venture, as it’s not completely signed, sealed and delivered yet. We’re hopeful of greeting and catching up with many readers in store over the coming months.

2 thoughts on “Three Fabulous Festivals of 2018”