The final ticking off for Ray’s list of places to see in UK was a trip to Bletchley Park in Milton Keynes. Rather naively, I said I’d drive there and wait for them in the car park. There were a number of reasons for this. A/ I had to get the car back to Bromsgrove so imagined it would be cheaper to drive there, then Bromsgrove, then catch the train back to Birmingham; B/ because I hadn’t the slightest interest in the place; and C/ I had work to do so thought I could just as easily do that in the car as on the boat.

It was an epic failure on my part!

Having parked up and dropped them off, I luckily found a toilet a short walk away otherwise I’d have been stuck. There were no facilities at all inside, unless you paid an entrance fee (not cheap at £18.50 per adult!). Some hours later, it was obvious this wasn’t going to be the short trip I’d imagined, and I realised if I didn’t head off promptly I wouldn’t get the hire car back in time. I messaged Barry and told them to find their own way back. Good job too, as they stayed mesmerised until the last possible minute. 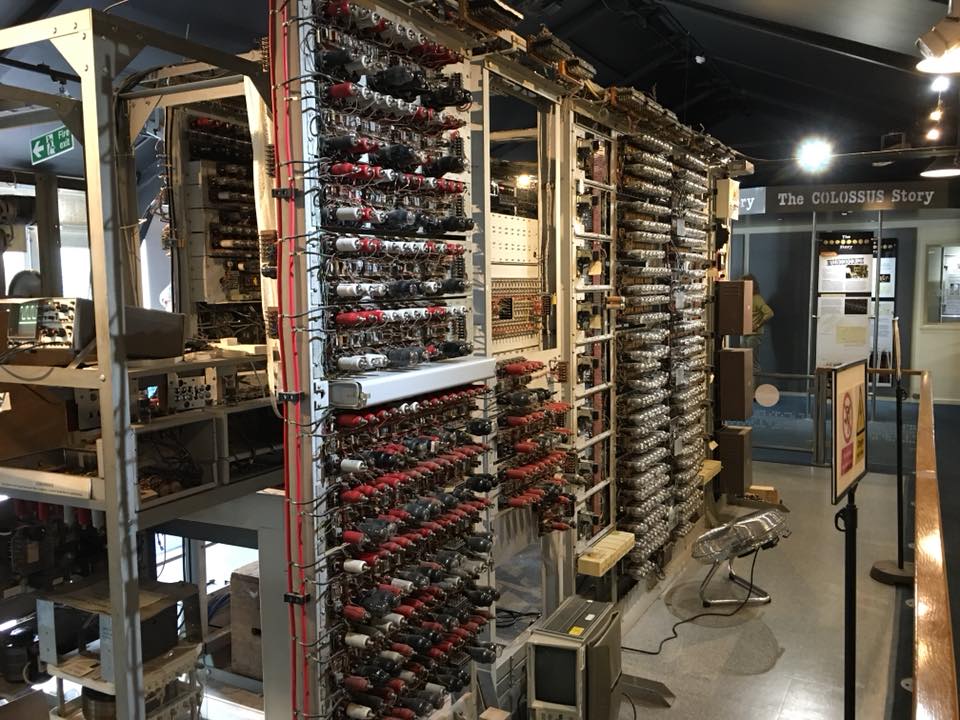 Since then, Barry and I have watched the movie ‘The Imitation Game‘, with Benedict Cumberbach playing the cryptanalyst (new word to me!) Alan Turing. And yes. WOW! Had I known how incredible the  story is about the code-breakers in World War II, I definitely would’ve been keen to visit too. I do however accept the film is open to criticism on many levels of accuracy. The overall concept though was, and is, fascinating.

“Sometimes it’s the very people who no-one imagines anything of, who do the things that no-one can imagine.”

What a splendid quote from the movie – maybe it was actually said too? Regardless, I like it.

Birmingham and back to Heathrow

For Ray’s final couple of days, he and Barry explored the sights of Birmingham, the photos of which Ray took for his memories. Barry was rather remiss and took none! Even the Bletchley Park pictures above were pinched from Ray’s Facebook thread, as Barry didn’t even take his camera in.

For his last night we partook of a drink or two at a rather lovely Scottish Speciality Craft Beer pub in Brum, BrewDog, who’d Tweeted they’d seen us in town. So I looked them up and we paid them a visit. Rather apt considering our trip north over the border the previous week. Ray treated us to a delicious Chinese meal in Chinatown too. What a whirlwind three weeks we all had!

Importantly, Ray spent hours on his final day on board Areandare finding a way to pack his newly purchased fold-up-Brompton as one of his two hold bags. Not an easy exercise! A successful one though thankfully.

Many months prior to Ray’s arrival, we’d booked First Class tickets for his return to Heathrow on Friday 17th August. I think it was only another £12 or something – and we thought he’d enjoy experiencing a luxury Virgin! He did.

Back at Verve Café ready to go viral

Ray arrived safely back to his hometown of Gisborne, New Zealand, on Sunday 19th August. A few weeks afterwards, a Facebook video of one of his fabulous Baristas was posted and went viral. Rhonda has worked at Ray’s café Verve for many years, and was instrumental in managing the establishment while Ray was with us.

Check out the story in The New Zealand Herald, and listen to the soulful music from Muru the busker, and Rhonda’s voice as she serves customers. Only in New Zealand! If you’re ever visiting Gisborne, this is THE place to eat and drink. Oh, and say ‘kia ora‘ to Ray from us.