Our summer kiwi visitors we’ve blogged about so far had booked their passage with us well in advance. Actually at least a year before their arrival. The next one wasn’t quite so planned. It also encompassed a great deal of places and people – leading to a number of blog posts to do the momentous occasion justice.

In March (I think!) this year, I spotted a Facebook post of Barry’s elder brother Ray, who lives in Barry’s hometown Gisborne in New Zealand. It announced his success in being pulled out of a draw for a place in ‘The Brompton World Championship‘. In all honesty I had absolutely no idea what he was talking about! As one does nowadays to acquire information, I Googled it. I discovered it was a race for owners of Brompton fold-up bikes, in London, in July.

Okay, that meant he was coming to London right? I thought I’d better check with him …

Actually, his plan was to come to do the race, then spend around three weeks or so with us. He’d just not quite got around to letting us know (here’s where the lol comes in!).

Awesome. Ray had never before given us any inkling of wanting to come to England, quite the opposite. He’d been rather concerned about the vagaries of the British weather. Rightly so usually I hear you say. As you and I now know, he chose a spectacular summer to make his virgin voyage to the Land of Hope and Glory!

We soon found out a lot more about Brompton bikes and the race in question. Ray already had an ‘old’ Brompton. For the race though, his intention was to buy a new one once he arrived in London.

“The Brompton World Championship is our flagship Brompton only racing event. With qualifying heats held in 15 countries and a final in the UK. The event has been running for 10 years and is held in cities around the world. Riders must follow the strict dress code which reflects the heritage of the event.” https://www.brompton.com/events/Brompton-World-Championship

Ray hadn’t had to qualify in a heat anywhere. There are apparently number of tickets worldwide available in a random draw – you have to apply and supply such things as details of age, nationality, and predicted speed. It was his first application, so he was understandably ecstatic to be chosen. Ray’s number and predicted placing was 580, which meant they reckoned he’d finish 580th!

More about the race later …

After much communication and sharing of spreadsheets (loosely it turned out!) of Ray’s itinerary, we both travelled to Heathrow on Wednesday 25th July to meet him off his flight from Hong Kong where he’d spent a few days. We’d contacted some friends in Boreham Wood in advance, as we thought it would be great to tie in a visit to them too. Barry and many of his group of friends from Gisborne had stayed in the area in the 1970s, Barry in 1976 on his inaugural UK trip where he first spotted canals.

We stayed with Jane and Mick on the Wednesday and Thursday night, enjoying much camaraderie and laughter.

Barry and Ray travelled back into London on the Thursday to pick up the Brompton (while I stayed at the house to do Ad-Extra online work – I so love the flexibility of a location independent job), but hit a slight snag and surprisingly Ray ended up the potential owner of not one but two Bromptons! Most confusing. There was a problem re-claiming the VAT on his initial online purchase, so he had to find a way to cancel that and buy another one! It all came out in the wash after some discombobulation and delay – finally successfully taking ownership of the shiny new wheels on Friday afternoon. The race was the following day.

In the meantime, we left Jane and Mick’s and headed to our accommodation for the next three nights in Paddington – unsurprisingly not far from a canal.

We’d previously moored at Paddington Basin in September 2010, for about a week. Barry’s son Tom was with us for a three-week visit, and we had one extremely special night on board when all four of our children were together. For one night only. This is yet to be repeated … Barry’s daughter Jamie was in London at the time on her two-year ‘Overseas Experience’ (OE as kiwis call it), and Lisa and Kim travelled down and up the country respectively  to be with us all.

Skip forward eight years and oh my goodness, how the area has changed! We were amazed at how the city here has embraced the canal. A buzzing, thriving, colourful place – especially in the warm sunshine with deckchairs scattered around and a splash area for the children. There were even powered boats for hire (Go Boats) to cruise coolly around whilst nibbling a picnic and sipping Prosecco. And an air of luxury with al fresco dining on a floating pontoon.

Incredibly we arrived at an opportune moment to see the ‘Finger Bridge’ raised. We had no idea what it was, until it lowered, then read that this occurs only at certain times … Brilliant! 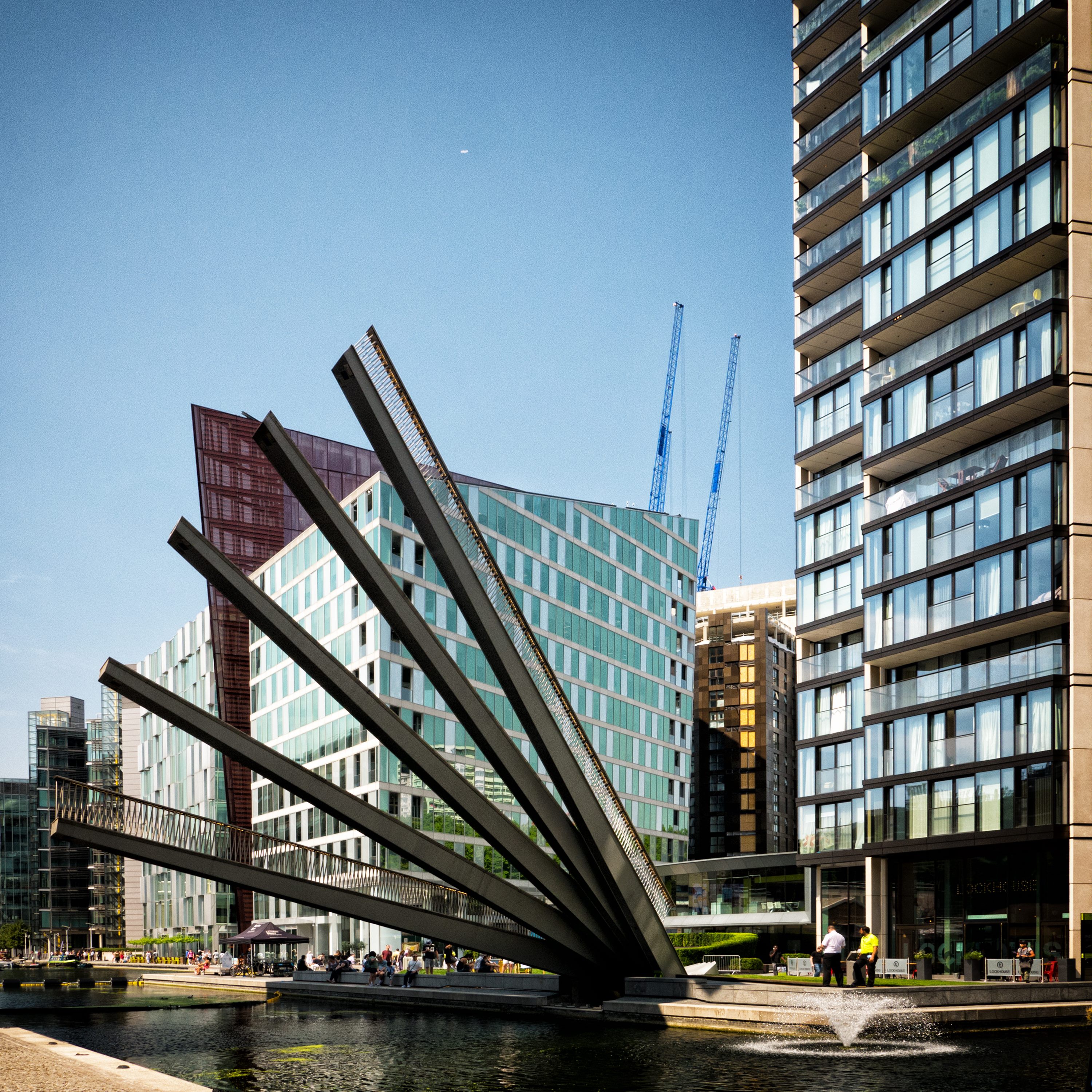 The new finger bridge over the Paddington Arm of the Grand Union. Five separate sections that lower and become one. Opened at 12:00pm on certain days, so very lucky to catch it!

The canal in places was covered in a carpet of green weed, possibly from the hot weather. The inventive local coots were making the most of the weed and the detritus they found to build a nest.

We even visited the floating café at Little Venice, that was there in 2010, and had a coffee – returning for a spot of lunch on the Sunday. It’s good to support floating businesses! 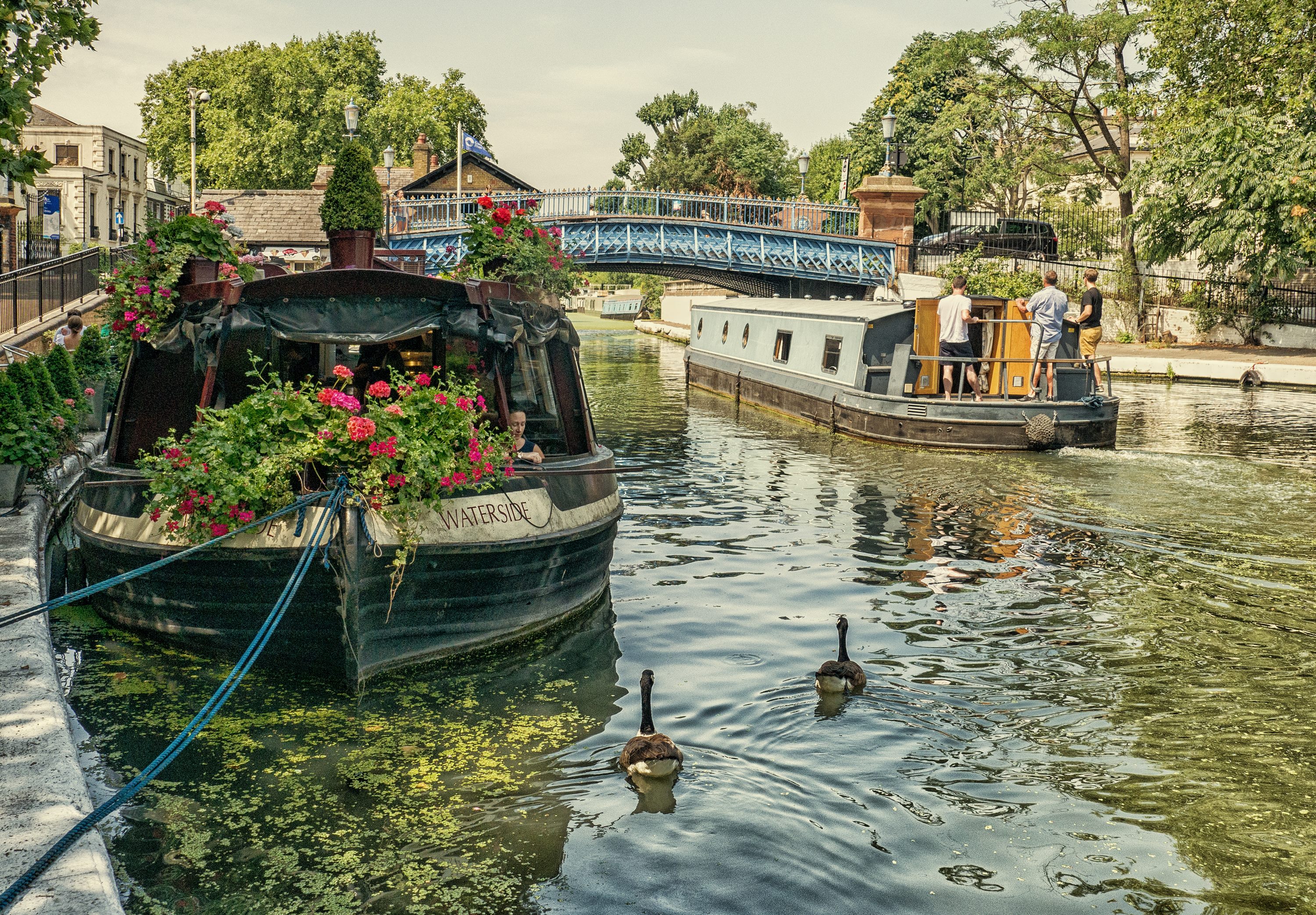 Then it was a long walk (sorry Ray!) to the Brompton store to collect the new wheels – not the blue wheels featured below!

Ray was over the moon. So much so that he decided to rise early on Saturday, the day of the race, and do a few circuits of St James’s Park where the event was held that evening. Needless to say, Barry and I chose to remain in bed as long as possible in the hotel in Paddington while he whisked himself away!

As stated above, there’s a strict dress code. Lycra is banned. City Slickers is the order of the day.  Ray had brought his outfit from New Zealand and fitted in with his companions well.

With almost 600 riders in the final, the cyclists were tasked to race around eight circuits of St James’ Park, zooming past the Queen’s pad each lap.

Arriving at the start of the hospitality to make the most of the much-anticipated day, we partook of what was on offer …

One such joy was standing on the winner’s podium – well you never know!

Another was a rather lovely experience with ‘Thomas Dakin Gin‘. Now we’d never heard of this brand, and still have yet to see it anywhere. But apparently it was first distilled in 1761, not far from where the Bridgewater Canal was built spookily in the same year!

Barry and I and four others heard the story, watched the gregarious chap describe the process, and had a taste of the product with a blend of lemon and honey I seem to recall. Very delicious thank you!

On the Dakin stall they encouraged passers-by to ‘Spin the Wheel’ – I was lucky enough to have a go and win a rather splendid Dakin umbrella! Handy too as it was much-needed the following day …

After many hours of walking around, chatting, drinking and eating, and watching other cycling events, the race finally began.

One of the highlights of this spectacle is the competitors must place their FOLDED Brompton on the opposite side of the track and wait for the whistle. It’s performed in stages so the riders don’t all end up in a tangled mess – though one or two did manage that during the race unfortunately but unsurprisingly …

The speed some of the cyclists were going at, and the closeness of the bikes was frightening! Have a look at the video (click here) and be amazed at the craziness of the challenges – you’ll see my back on the gin tasting wagon at 24 seconds in, and Ray and his bike at 28 seconds and one minute 52 seconds.

His finishing place on the day was a highly honourable and deserving 289th. Which is 291 ahead of his predicted 580. Pretty darn amazing I’d say for an almost 64 year-old kiwi! He definitely deserves a medal.

Following the excitement of Saturday, Sunday was our last full day in the capital. Despite us all feeling rather knackered after a long day and much walking and frivolity, we made the most of the time left. Sadly the summer weather turned a little awry, as you’ll see from the grey skies.

We’d planned to meet our fabulous friend Sandra from ‘The Doggie Boat‘ in Camden, as she’s been in and around London this year and we’ve missed each other. More of the green weed proliferated around Camden Lock – crazy stuff. 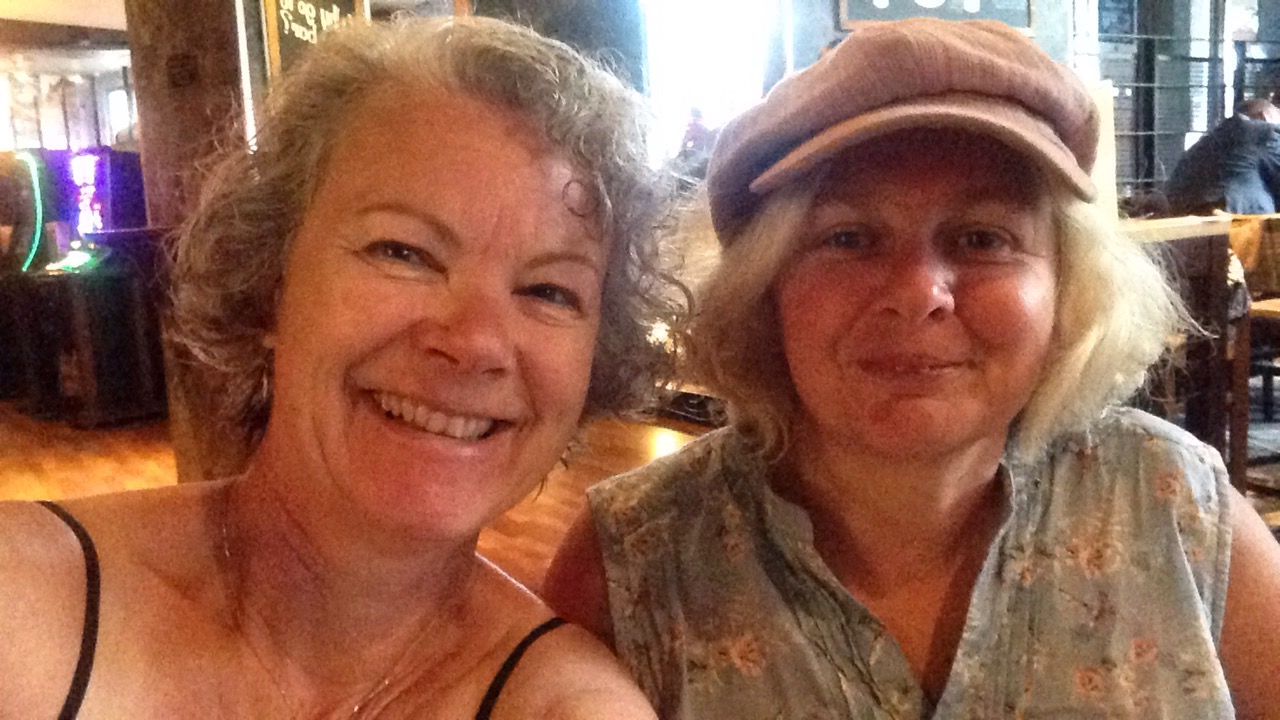 Snatching a catch up lunch with Sandra

You may have spotted that a few of the images in this post aren’t that great – it’ll be because they’re taken by me, with my iPhone 5, rather than by Barry who’s a far better photographer! The Sandras selfie is quite obviously one of those …

Heading across London again we crossed the River Thames for a tour of The Tate Modern. This incredible space in central London is (mostly) free. We wandered around for a couple of captivating hours, and happily discovered a viewing floor on the top floor of the Blavatnik Building,  giving a 360degree view of the city and beyond. It did as well for us as the London Eye would’ve – but for no cost. Marvellous.

Some spectacular views of the London skyline from the viewing level. Most impressive!

Following all that culture, we ventured back out into the elements and continued along the Thames walkway to Tower Bridge. Barry captured many a fine shot along the way, there’s so much to see … 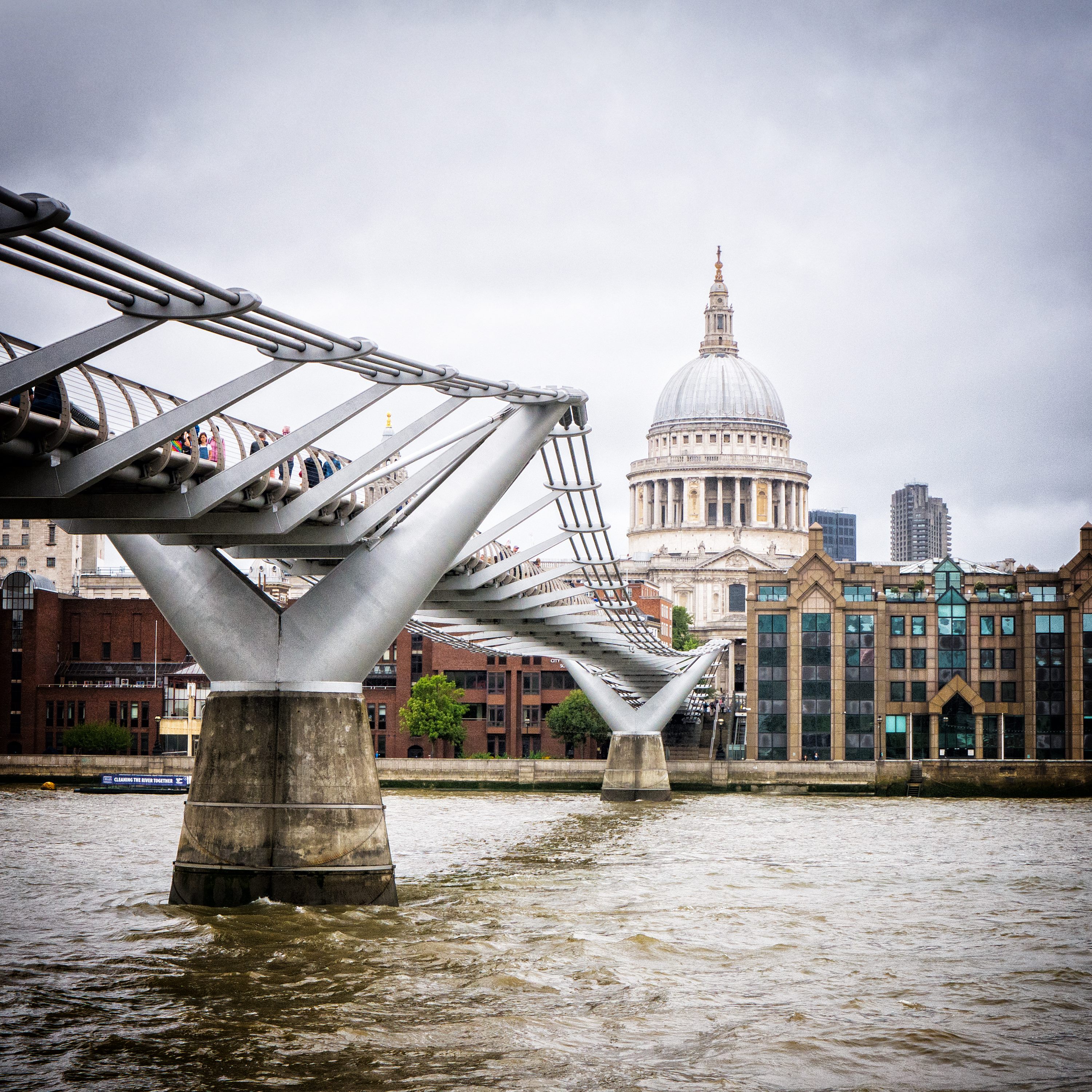 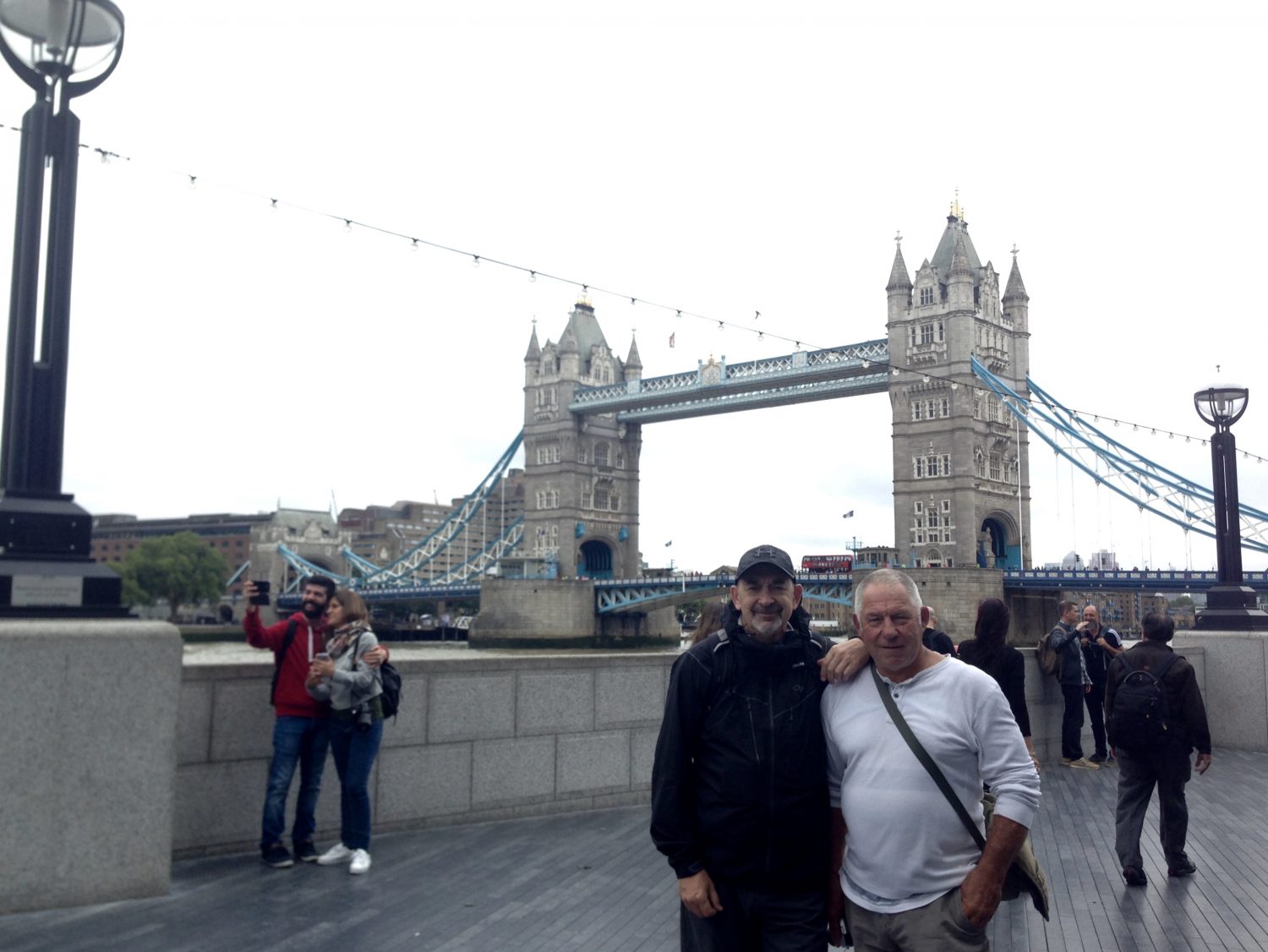 I’m sneaking in a picture of the brothers, despite it being poor quality (mine of course!), because it has both the brothers in … 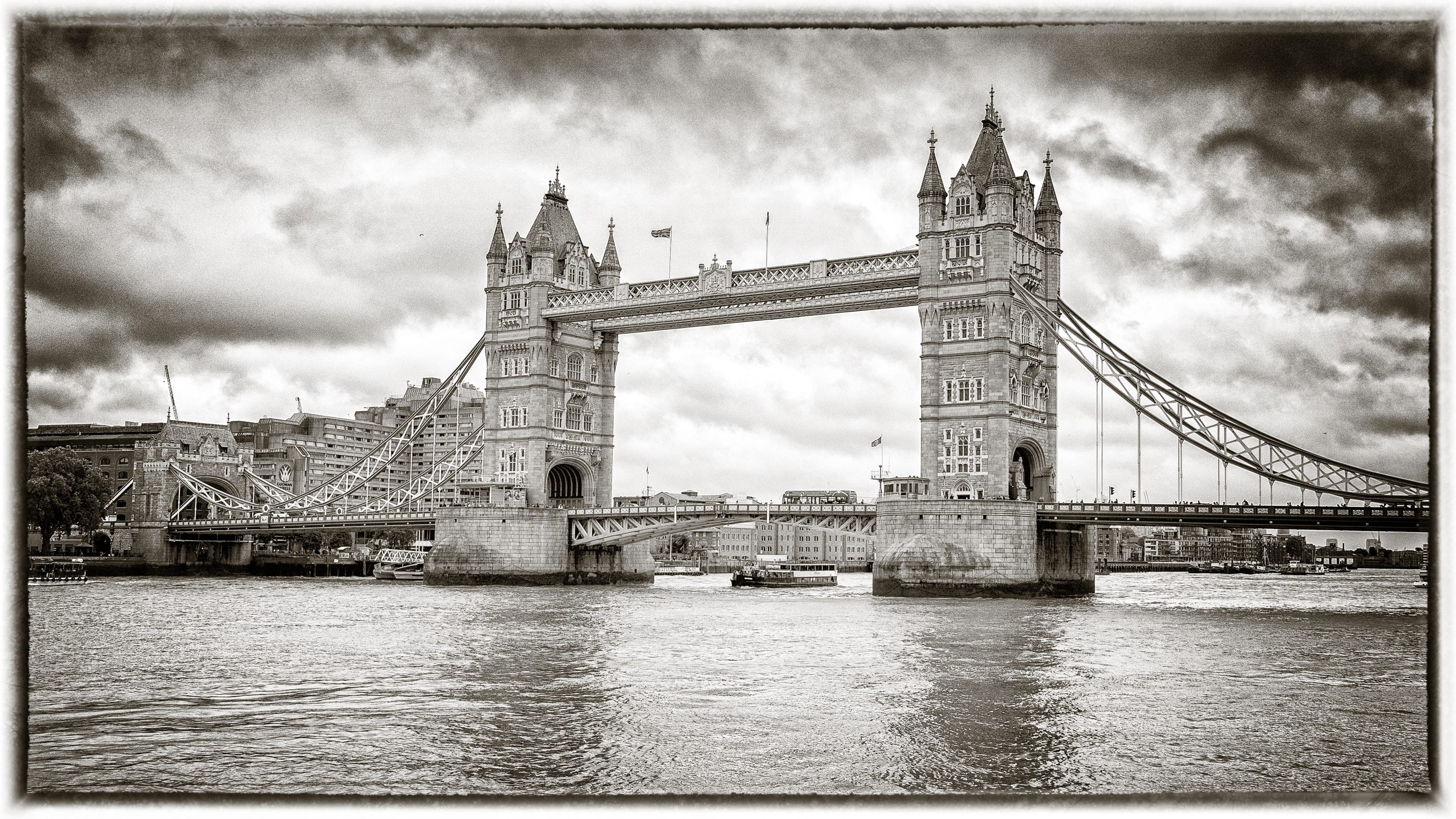 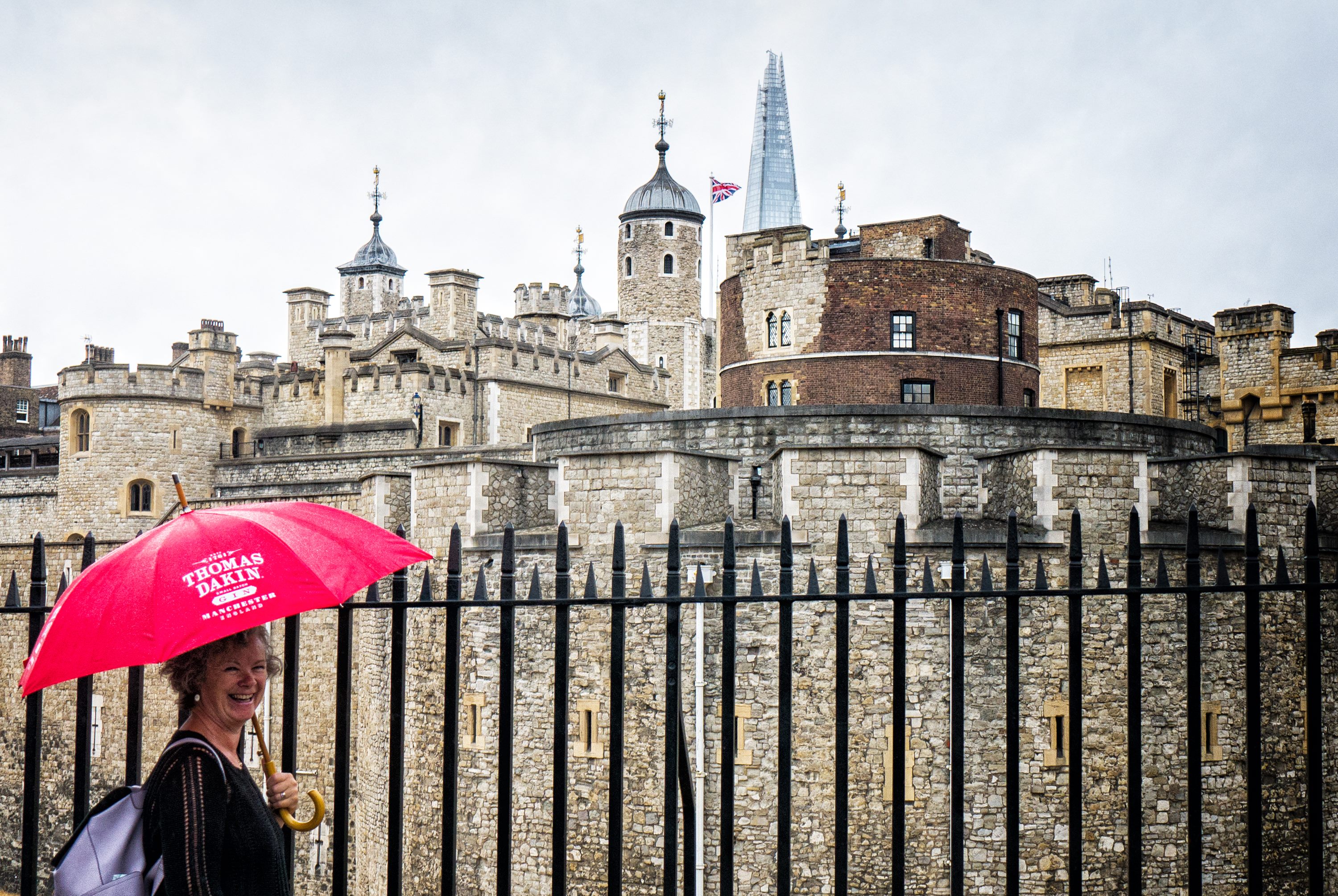 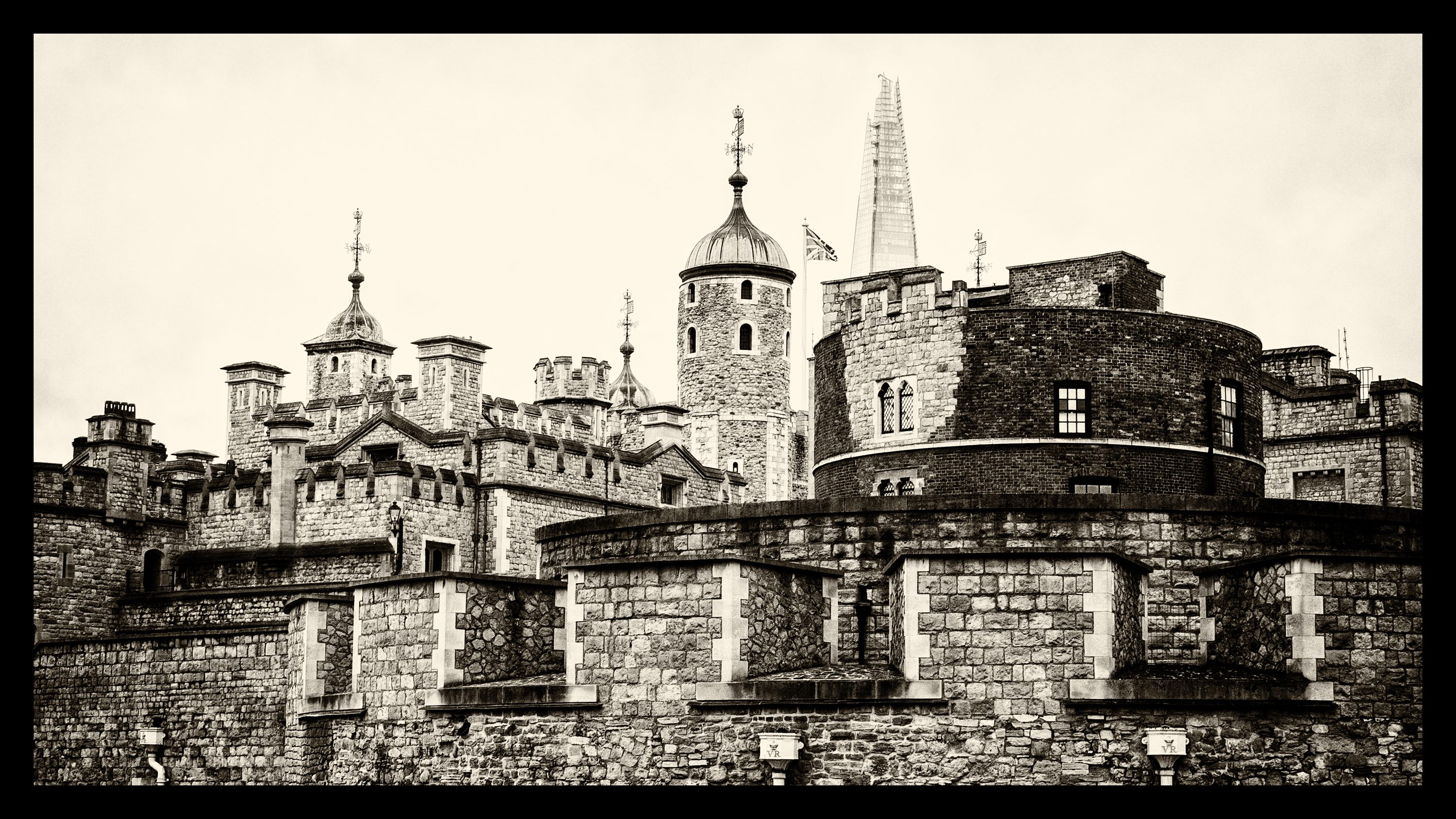 Meanwhile, we returned to Areandare moored at Penkridge on Monday 30th July, the day before Ray’s birthday, to make some narrowboating memories.

Where are we in ‘real’ time?

We’ve a few posts to write to catch up, intending to do so in the next week or so. In the meantime, we’re very close to our first floating festival of 2018. The Black Country Boating Festival (BCBF), to be held at Bumble Hole Nature Reserve (I adore that place-name!) this weekend. We’ll be trading beside our dear friends Helen and Andy from Wild Side, again for the first time this year and are very much looking forward to spending time with them. And of course everyone at the event, and the brilliant entertainment on offer.

If you’re anywhere nearby, do come and see us there!