Our next round of planned kiwi guests arrived on Saturday 30th June for a three-night canal adventure. Deb and Graeme had spent the previous few weeks travelling around Europe, their main destination being a UK friend’s daughter’s wedding in Santorni. Fortunately when they arrived with us the weather in Manchester wasn’t too shabby after the sweltering heat of Greece!

Barry, as usual, was keen to ensure they experienced the delights of traveling through locks. This entailed us moving UP the Rochdale Nine on Friday 29th June, even though we weren’t heading that way at all, mooring at the summit (we’re fairly confident few people stay overnight at Piccadilly Basin, but we felt perfectly safe  nestled amongst the local characters and students), in order to descend the following day with them. They’d stayed in Leeds the previous night, and Gav and Helen brought them in their car and also stayed  for an overnighter. It’s quite a squeeze to fit six people on board as you can imagine – Barry and I slept in the ‘cupboard’ in the Boatman’s Cabin!

Two passengers up, six down! 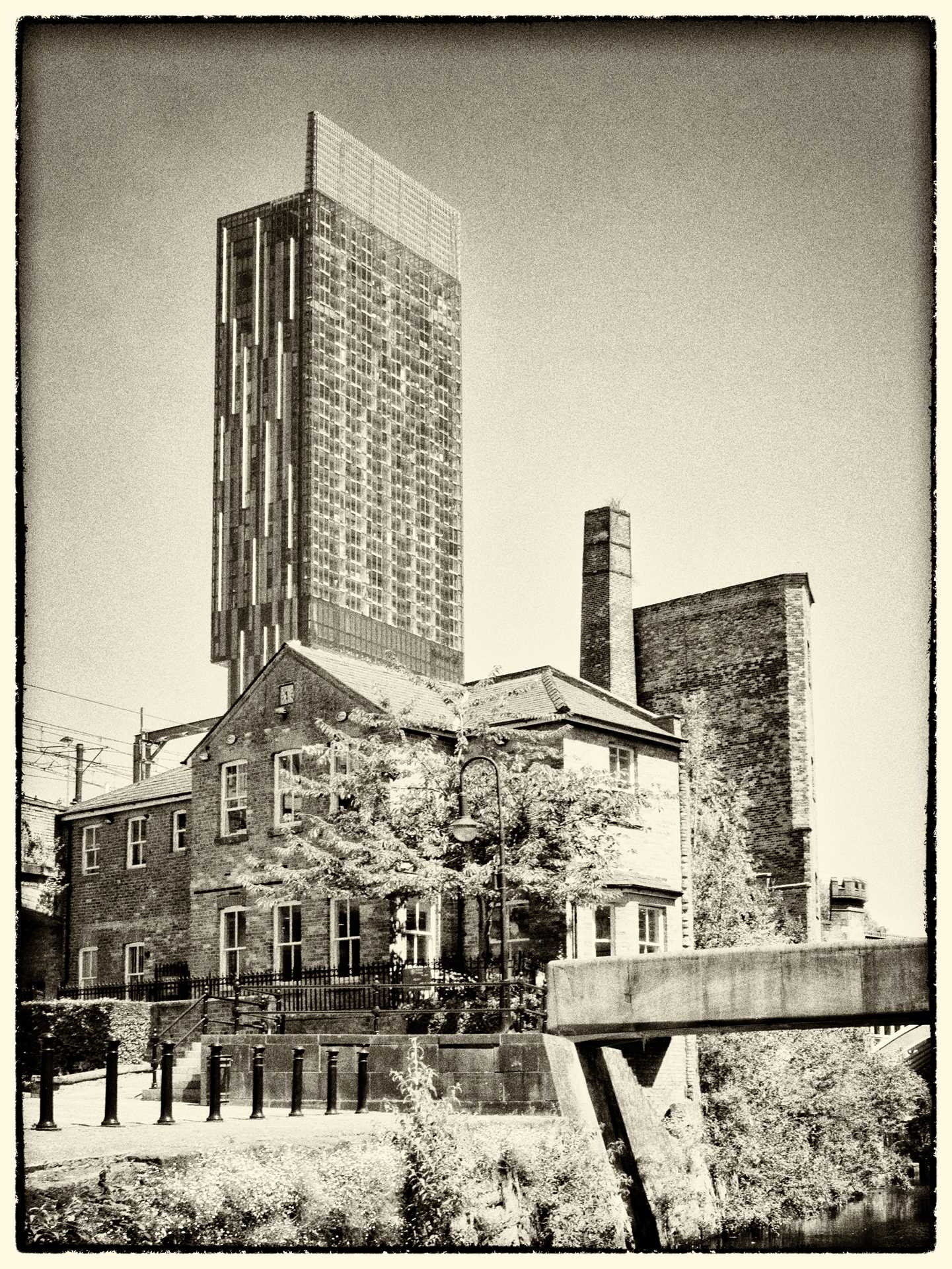 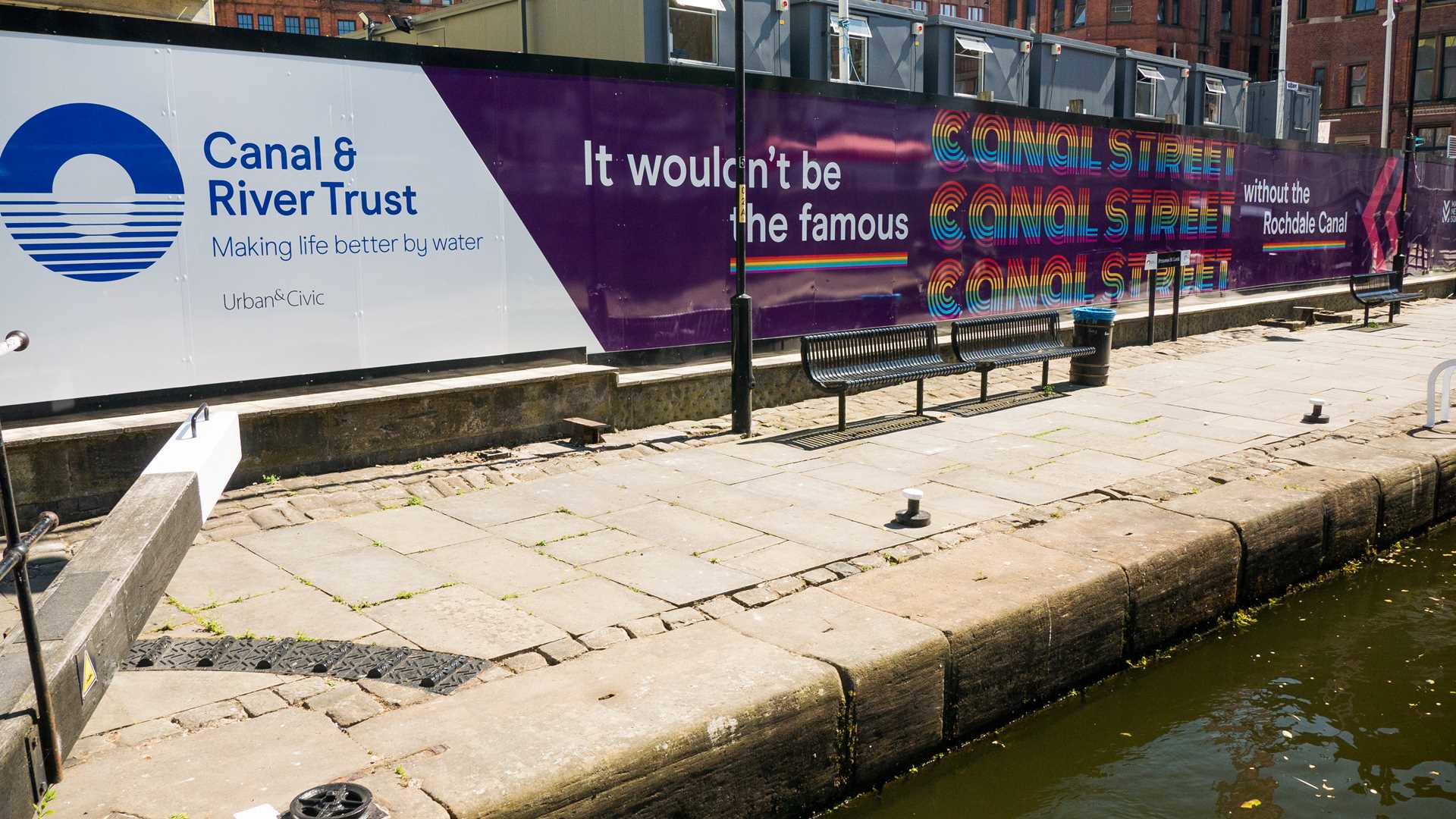 A nice touch to promote the (sadly controversial) new CRT logo, and Canal Street at the lock

It felt a little cruel that Deb and Graeme’s first experience of locks were on these, as they’re rather hard work – and in some places decidedly dodgy! ‘No lewd behaviour‘ signs aren’t found anywhere on the system apart from one particular lock on this flight as far as we’re aware, which gives some indication of the interesting sights usually found thereabouts! 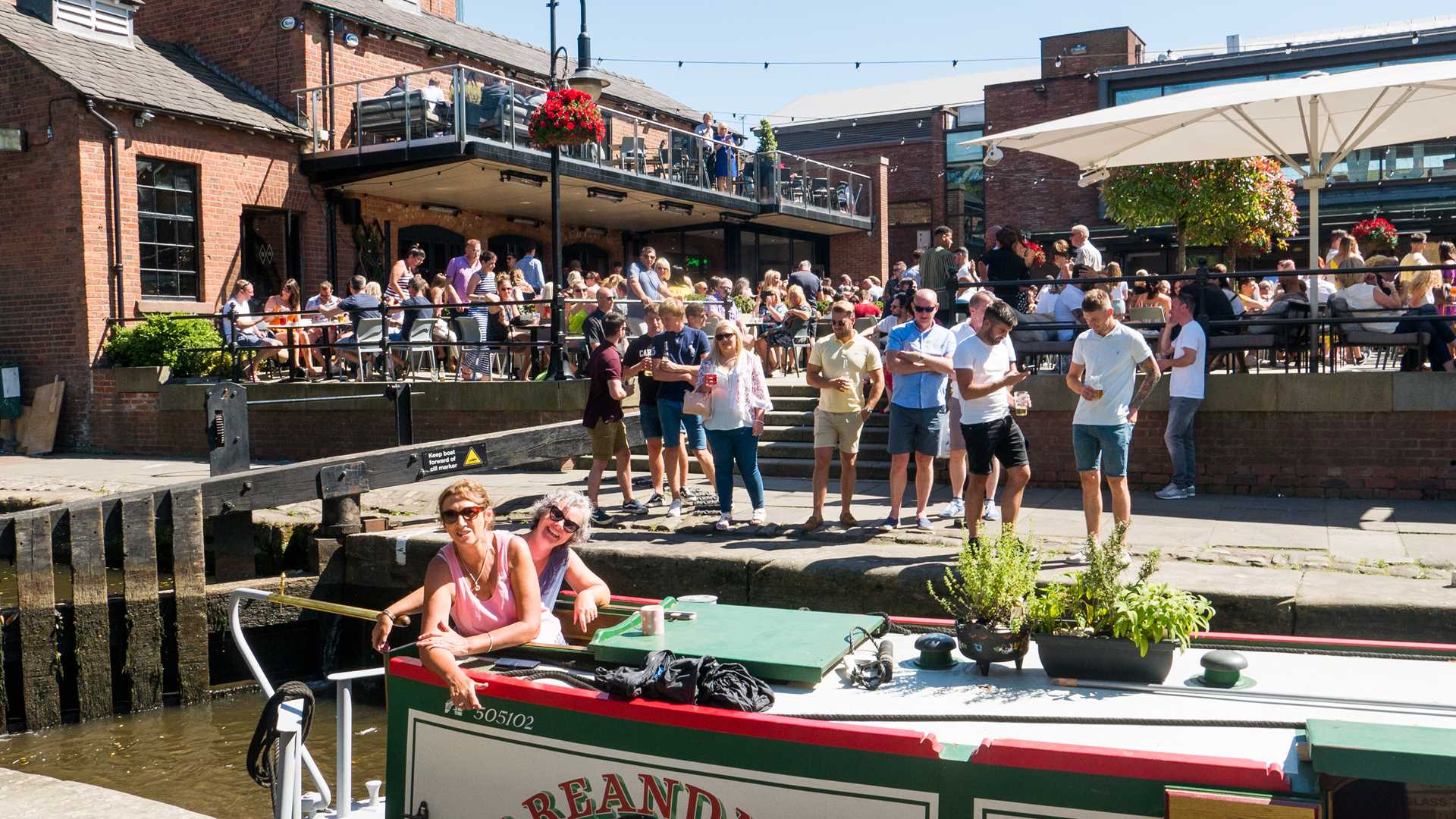 Just a handful of gongoozelers to entertain!

All went smoothly, and from the stern it looked like the new crew had fun as they learnt the intricacies of locking. Graeme is more used to boating at sea, being a keen fisherman back home in Aotearoa. He soon got the hang of locking and steering during his time on board.

We didn’t think we’d find a mooring in Castlefield Basin, but maybe everyone else thought that too, as the place we’d stayed a couple of times before was thankfully vacant. It’s a great spot for sitting and gazing admiringly at the contrasts of this fabulous city – and of course chilling with a drink before heading into town for dinner.

We love Manchester, and wanted to show them more of the sights the following day. Old Trafford was a no brainer. The largest football stadium in the UK can hold 74,994 people – almost twice the population of Gisborne where Deb and Graeme live! Needless to say we didn’t extend our visit to a tour – it’s rather costly and only for true football fans. 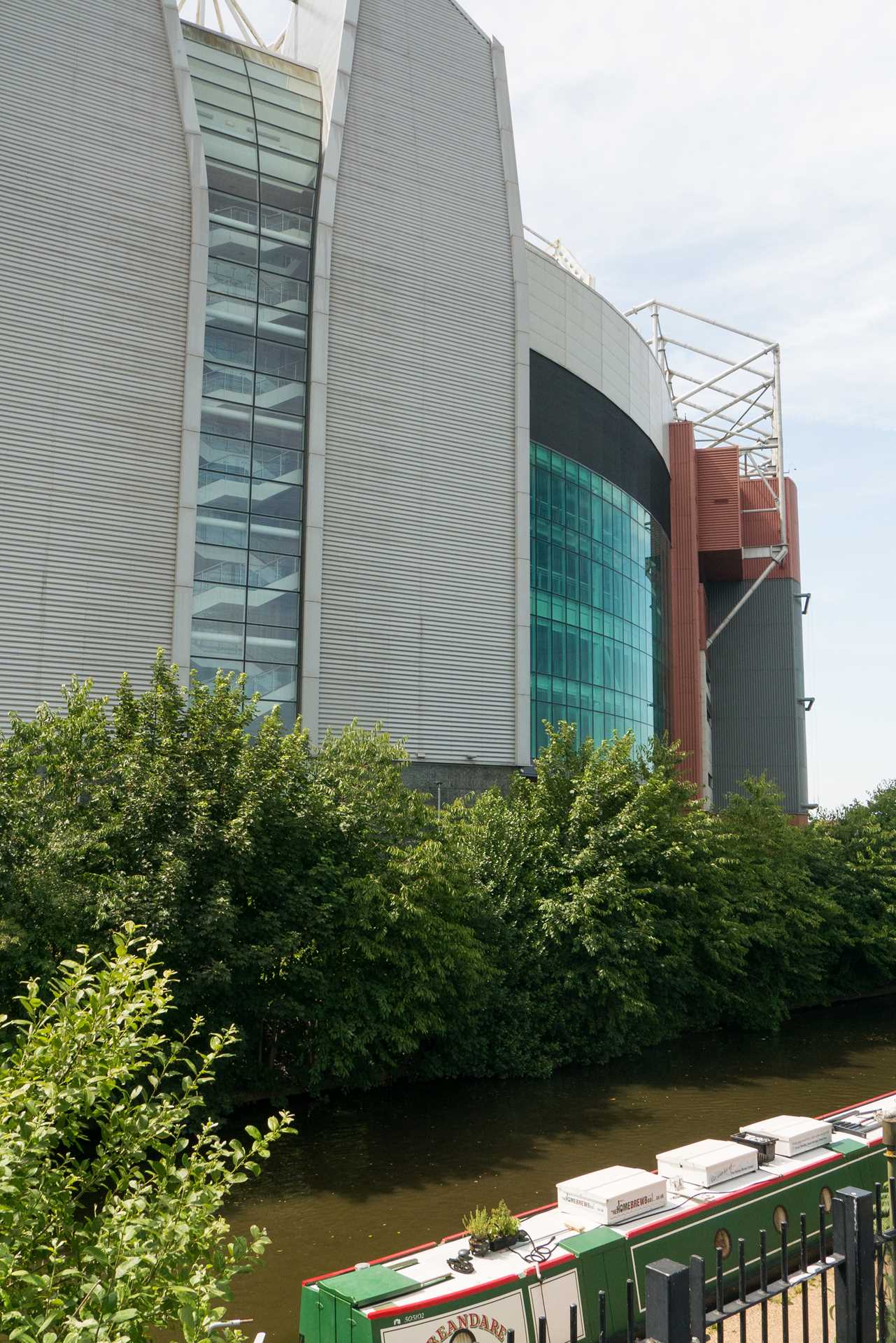 We moored right outside ‘Old Trafford’ stadium for a quick look around.

Salford Quays was a bit of a walk from there, but another must see as far as we were concerned. We caught the tram back …

On the Ship Canal we discovered a ‘family fun outdoor swimming’ area. We don’t recall it being there previously. There were dozens of people splashing and larking about happily here, so we were quite frankly appalled to see the ghastly sight of a large collection of rubbish nearby. I later Tweeted about this to Salford Quays, and got responses from different people who kept passing the buck to the Council and the Ship Canal. The nearby rubbish bins were overflowing, so even if people had wanted to throw their trash away it would’ve blown out. One person stated that the area is cleaned quarterly – to which I responded that was obviously not frequently enough! The following day someone Tweeted that the area had mysteriously been cleaned up, and sent a photo. Hurrah! The wonders of Tweeting … 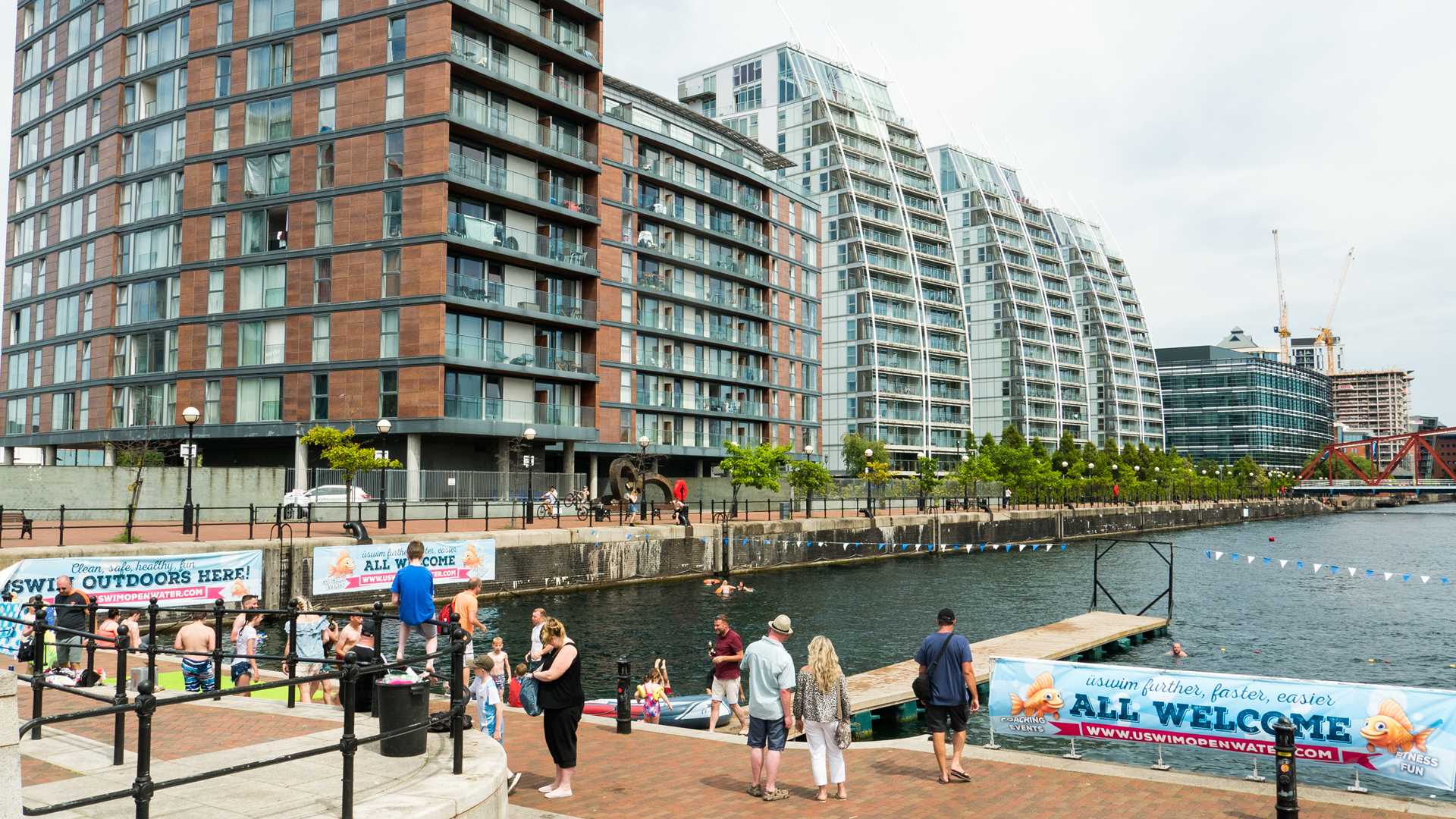 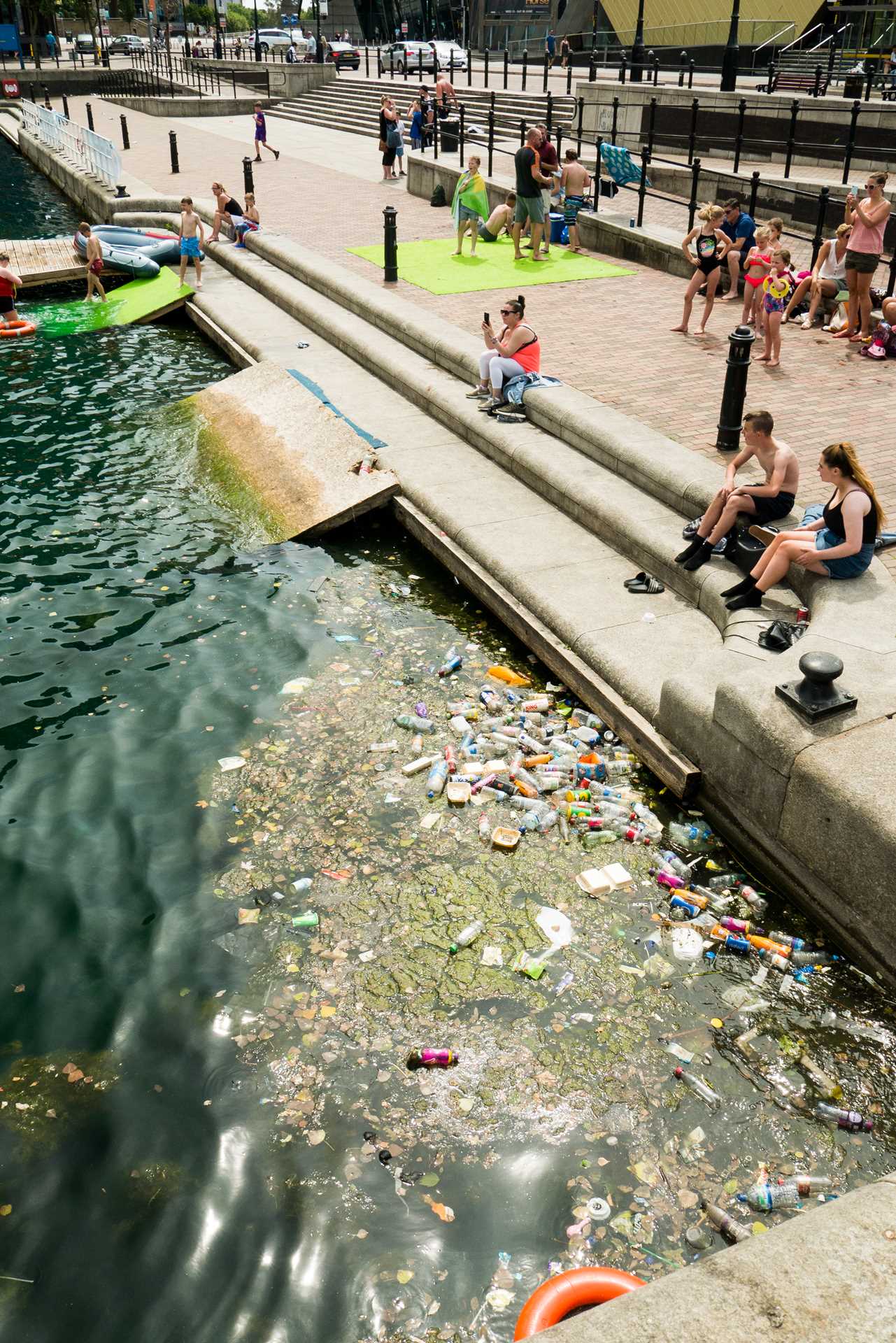 A disgusting sight which doesn’t show Manchester in such a good light!

We love Dunham Massey, our next itinerary stop. We’ve been there by ourselves, and with a number of guests, and never tire of it. Their extensive grounds and free-roaming deer are a delight – and this time we even managed to visit the house itself for the first time. Previously we’ve always arrived late in the day – this time we moored up nearby overnight, and walked there in the morning.

Rather than pay the admission for us both, we decided to join the National Trust as a couple for the year, and pay in monthly instalments. Which means we’ll be doing our best to visit as many National Trust properties as possible until July 2019, to get our money’s worth! 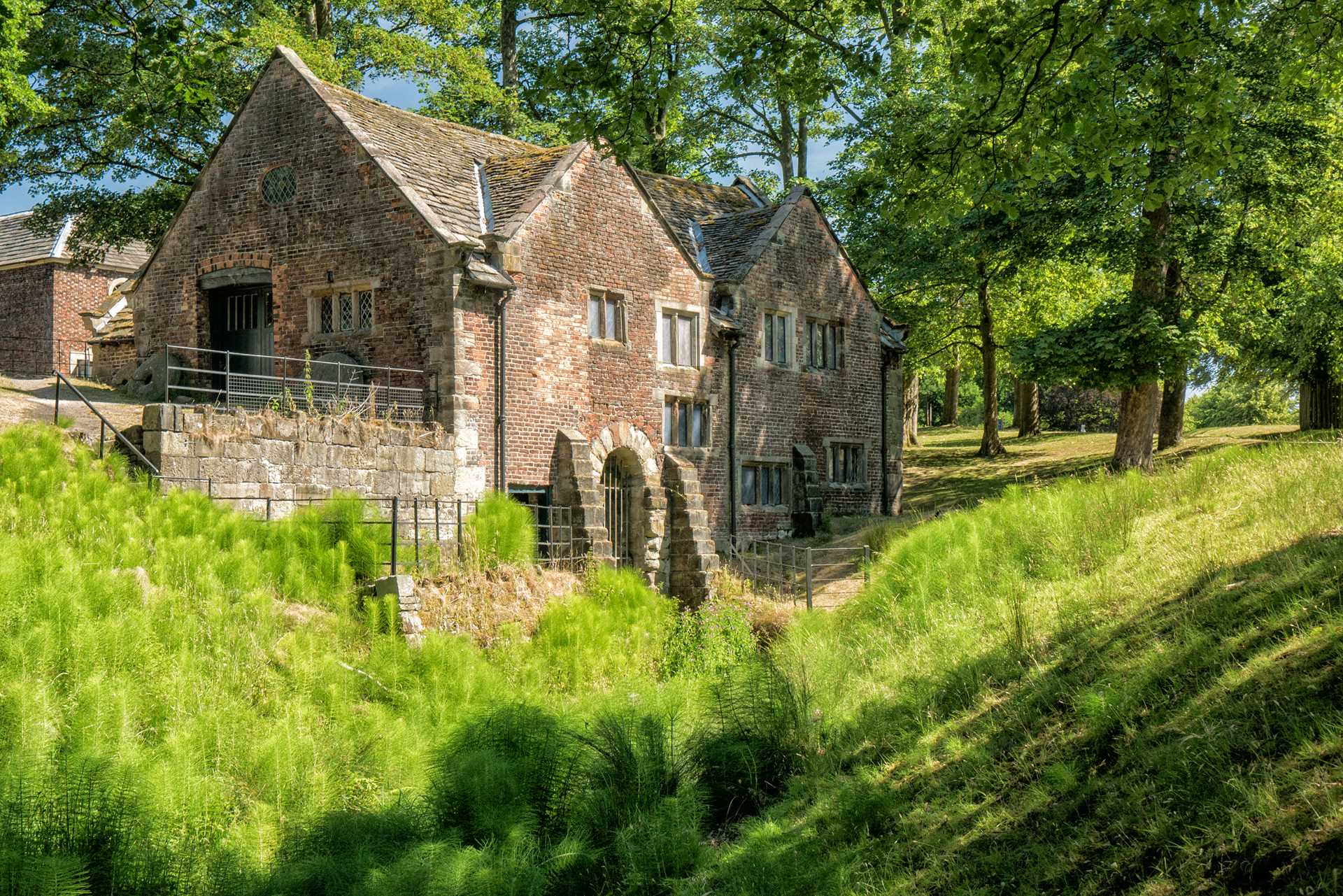 The Water Mill at Dunham Massey

Barry had planned quite a full itinerary, so we had to leave the house and gardens after a few hours. En route to the boat we enjoyed a quick pint at The Swan with Two Nicks, where Barry received a phone call from Fred, our friend from Sheffield, asking if he could come and see us and our kiwi visitors. Fred and his wife Sarah had lived in Gisborne in the early 1990s, and wanted to catch up with Deb and Graeme. Sadly Sarah was working, but Fred and Barry found a way for him to meet us along the way and stay overnight.

We scooped up Fred near Warrington, where we stopped briefly to top up with water. It was rather a long but eventful day, moving through a couple of tunnels (one of which Fred navigated ‘bumpily’ while we all ate tea), eventually mooring up precariously in the country, very late, overlooking the River Weaver. A weary crew had a slightly more subdued evening.

This is another spectacular structure we love showing visitors. We suspect they were suitably impressed too …

The journey down the River Weaver was the final cruise for our Three Musketeers – and what a splendid day it was! So much blue sky and sunshine to impress them. 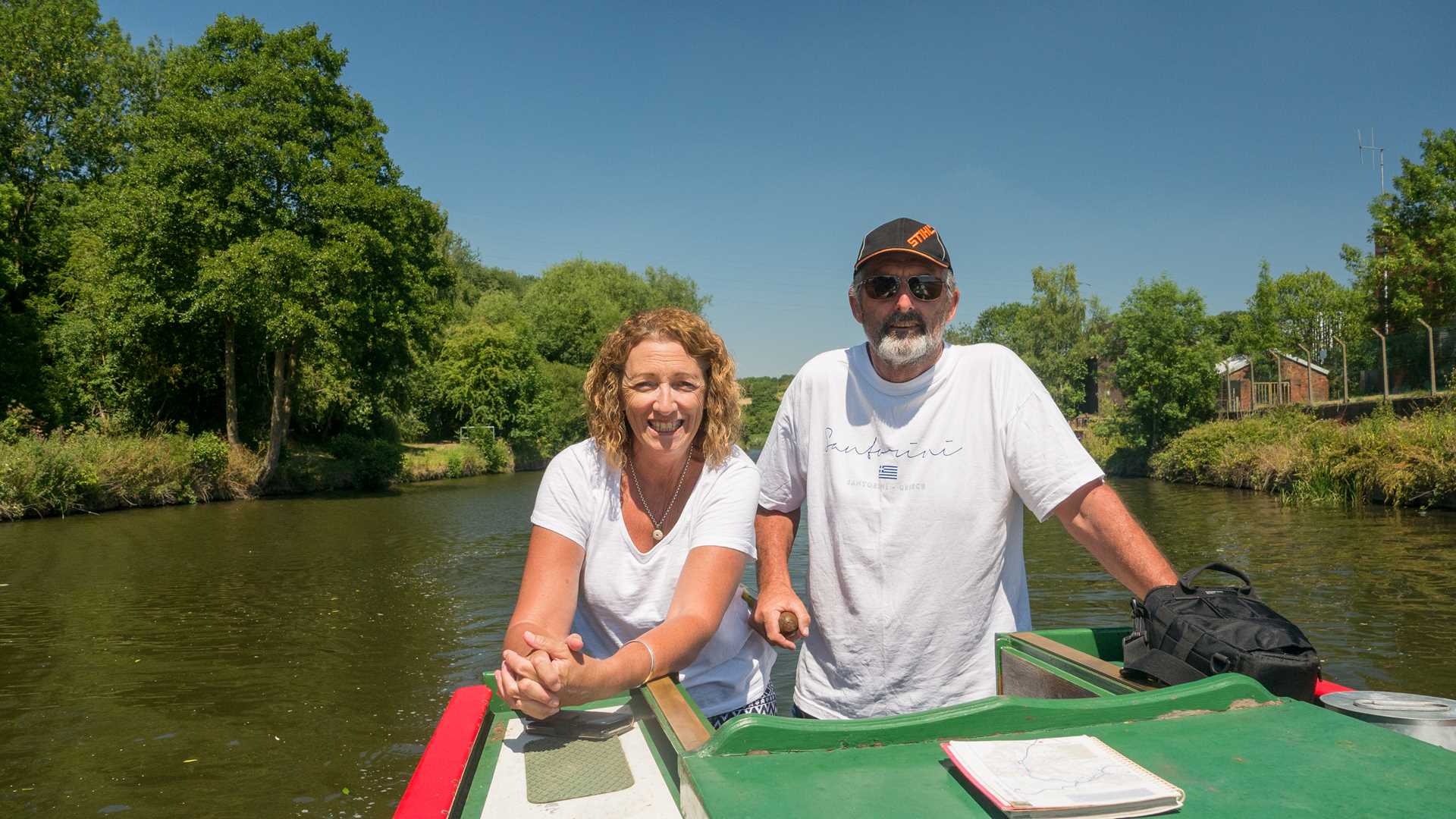 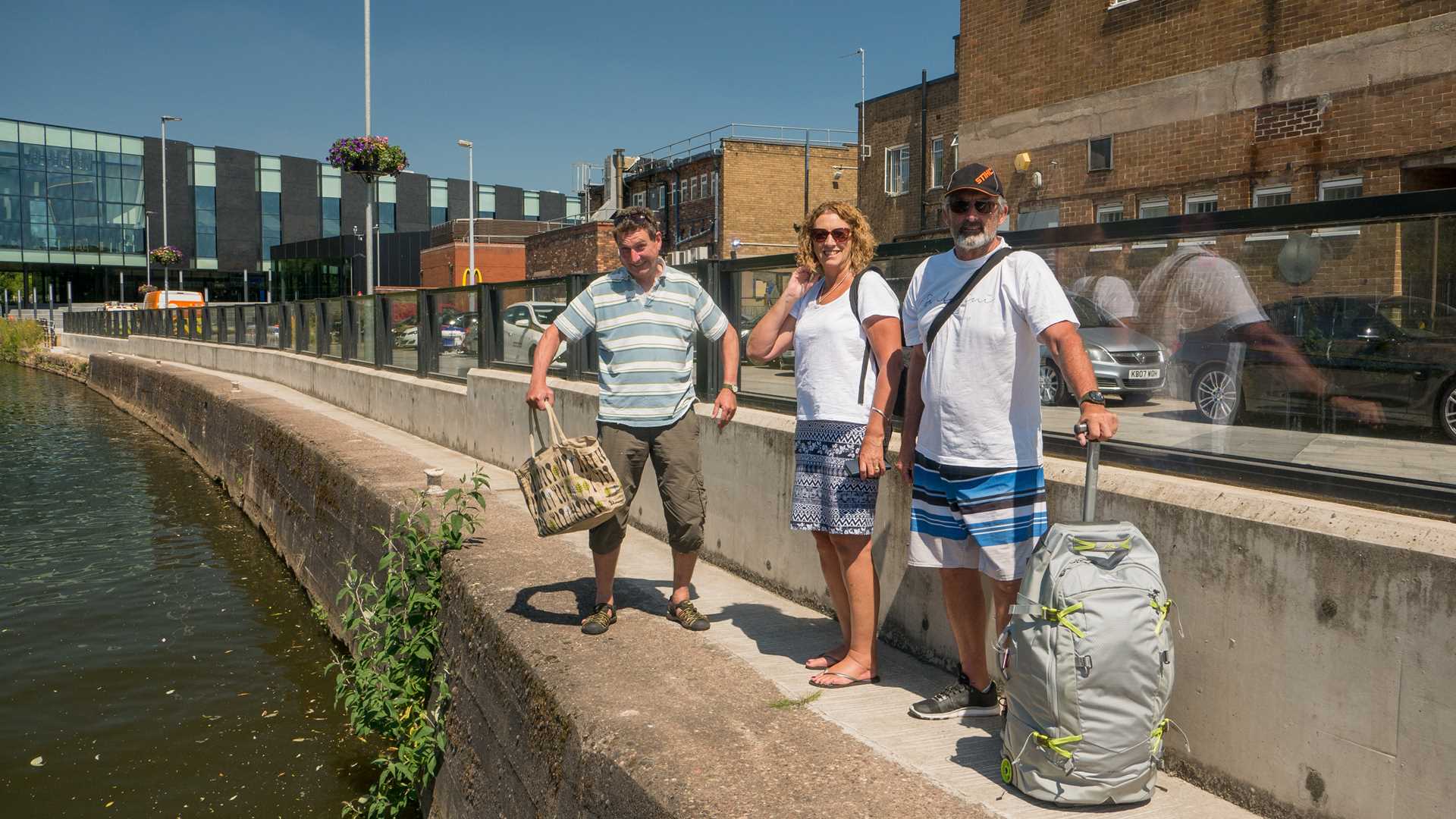 All packed up ready to head off to their next port of call (Borehamwood), with a welcome lift back to their hire car in Leeds from Fred 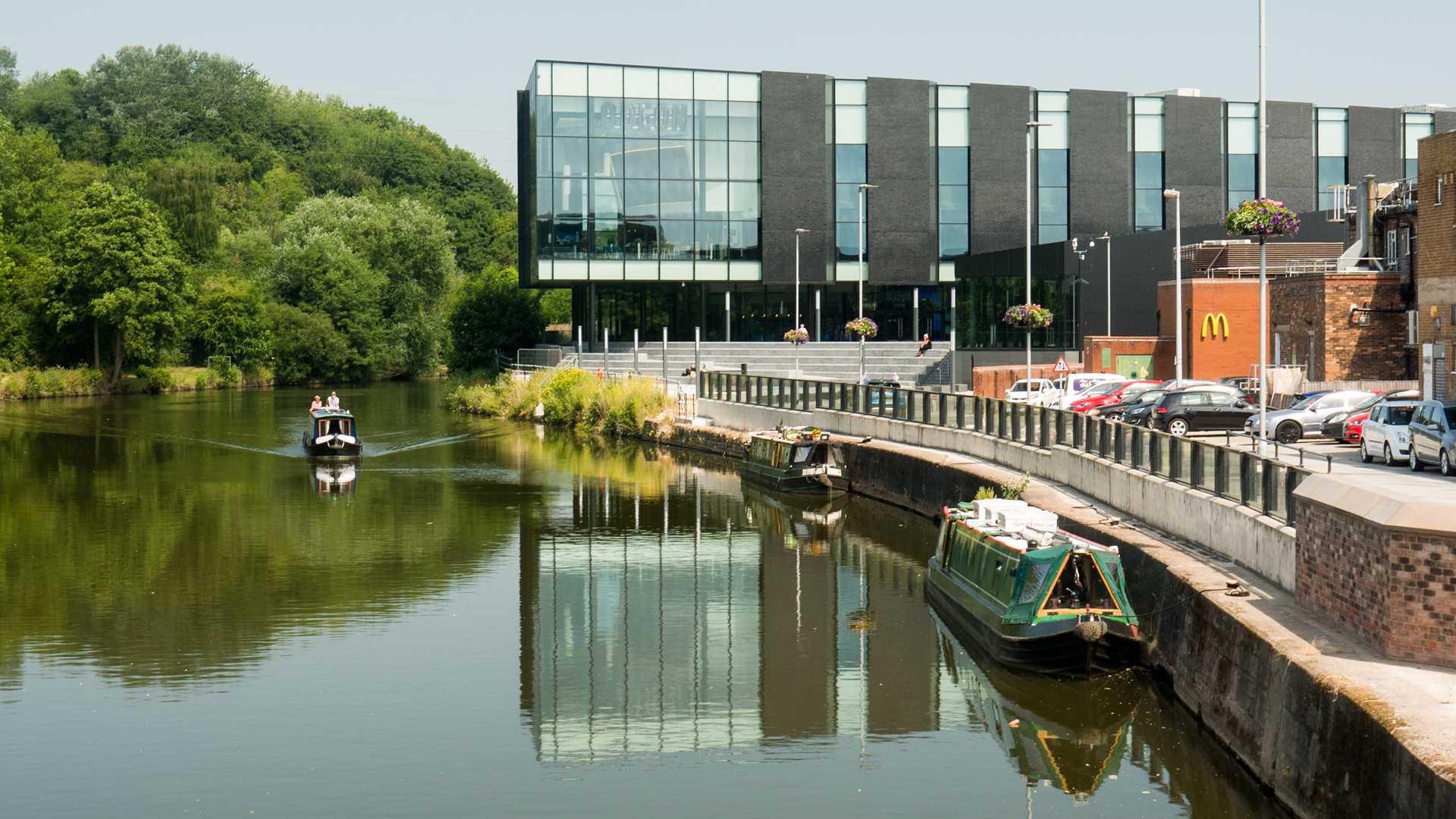 Areandare moored up in Northwich for a few days

After bidding a fond farewell, Barry and I had the joys of attempting to get treatment for an infected sebaceous cyst that had mysteriously appeared on the back of his neck (possibly exacerbated by being boiled in the sun at the back of the boat!). One of the challenges of living this continue cruising lifestyle is accessing unplanned healthcare. I shan’t go into all the details as it would bore you to tears, but suffice it to say we wasted hours being shoved from pillar to post before finally a taxi ride took us to an emergency Department at Leighton Hospital where at last a doctor wrote out a prescription for antibiotics.

The following day we picked up a hire car from Enterprise and drove to Lisa’s overnight, being in charge of the boys school-run the following morning and evening. Then we travelled to mum’s in  Ombersley, for planned dental appointments and some sorting of documents, as well as retrieving all the boxes and ‘stuff’ we’d had stored there for over five years.

Goodness me! Just writing about all of these comings and goings is making me feel overwhelmed – and there was so much more yet to come …