It may seem to some readers we spend most of our time enjoying ourselves. Together, with family, and with friends.

True, life in the Teutenberg/Walsh boathold (no household here!) it’s vastly different to the majority of people in our peer group. However, we are NOT retired. Barry has another two and half years to go; Sandra just over eight.

We do not, and neither of us ever have, rely on any form of public funds (i.e. state benefits). We DO have a small savings buffer as we’ve both ‘worked’ in the usual way for over 35 years each in our chosen professions. We have our boat, NB Areandare.

Adapting as we go …

This year has seen a marked difference in our travelling and trading plans. One of the most important things we’ve learnt since our bold/brave/crazy/impetuous (take your pick depending on your perspective!) decision to sell bricks and mortar, move to England, buy a narrowboat and leave our ‘normal’ jobs of Professional Photographer (Barry) and Midwife/Educator/Quality Coordinator (Sandra), has been to regularly review what we’re doing to attempt to sustain our chosen lifestyle. Up until very recently of course, I’ve also been caring for my elderly parents as their health diminished.

What we’re very conscious of is not getting sucked back into the hamster treadmill – or feeling coerced by ‘the powers that be’ into ‘ticking their boxes’.

Admittedly there’s been a few times such as the two applications for Barry’s UK Spousal Sponsored Visa (with the third one looming), or recently opening an ‘Executors Bank Account’ with my sister, or hiring a car from Enterprise (they ask about occupation this year having never done previously!), where not being able to simply answer questions about home address and employment, as most people easily do, can feel rather frustrating.

But … overall we feel an incredible sense of freedom ‘doing it differently‘ and NOT waiting to live until it’s potentially too late. We’ve known far too many people who have left this mortal world much sooner than expected. We both believe strongly this life is it. No point gambling precariously that there’s something ‘better’ to come in our worldview. As I’ve alluded to previously though, this way of living is not for the fainthearted. It takes courage, perseverance, partnership, persistence and planning (just not long-term or it’s just too freaky!).

For the past two years we’ve both worked at Calendar Club outlets. In 2016 we each worked for people we knew who were running stores. Last year we successfully ran our own shop in Lichfield at the Three Spires Centre. A full-on fourteen week commitment, with only two days during in total when we shut up shop. We even managed to stay open during the period of severe snowfall. 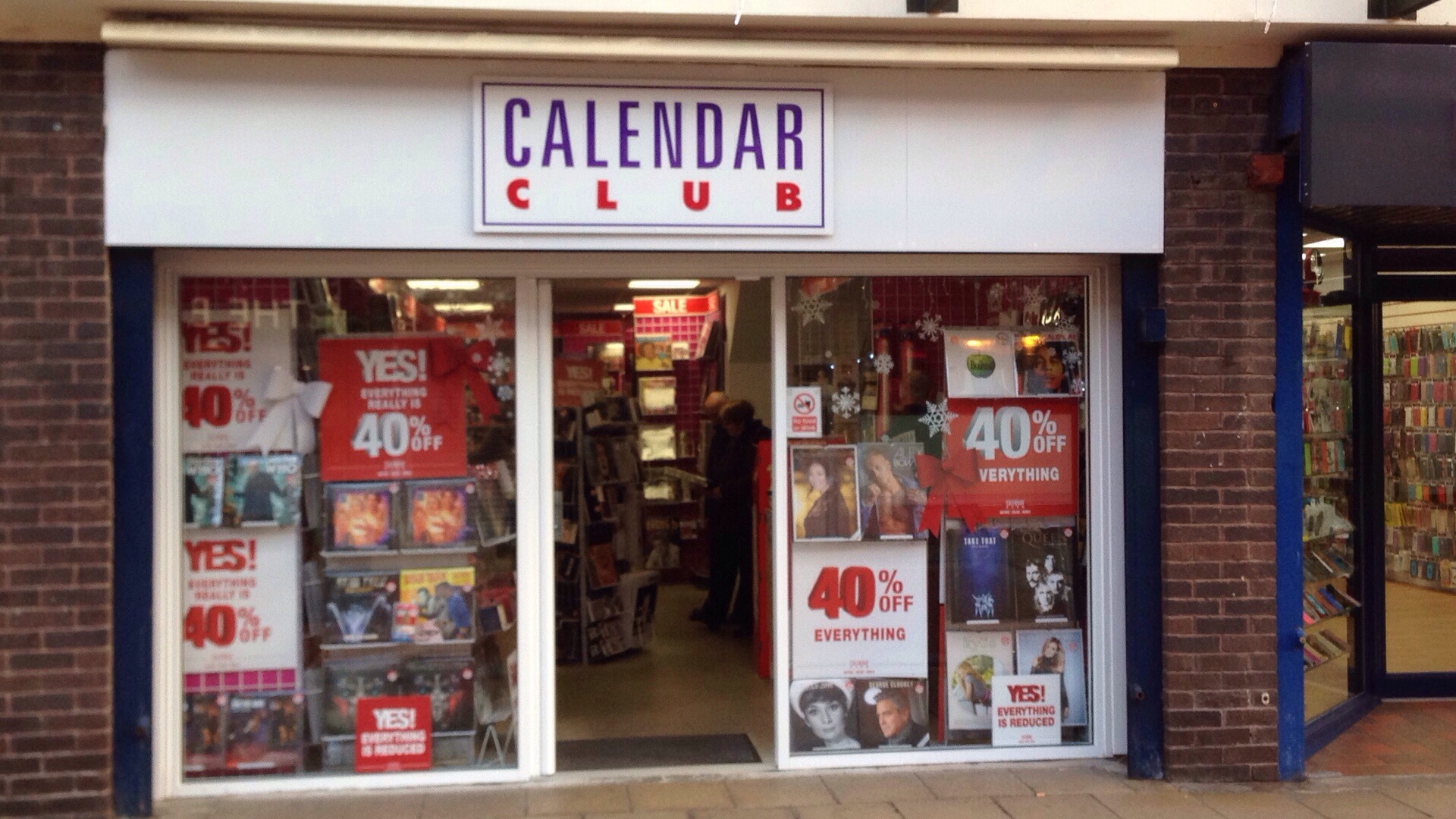 However, with both of us running the store we each had sufficient time off. We’d chosen Lichfield as there were good moorings nearby, with public transport routes to the city – and it’s near family and friends, as Sandra lived in Sutton Coldfield for many years. And from 1st November to 1st March, 48 hour moorings become 14 day ones. So we were able to move the required distances during the time we were ‘working’.

We’re very proud that this year, as we met the Key Performance Indicators set by Calendar Club, we’ve been invited to run the Lichfield store again. It’s a brilliant way to earn a good sum of money, on a commission basis (we’re ‘Self-Employed Operators’), in a set period of time. So it’s ideally suited to live-aboard boaters who’d prefer not to work in the usual way. There’s obviously many other people who live on land who run stores and mall outlets too.

This year Calendar Club have a number of vacancies needing to be filled from now till October.  You can apply by going to this link and filling in the online form. Currently the areas where Calendar Club are seeking motivated and committed operators are:

There’s a number on the list with nearby waterways … Do contact us by email if you want to chat about our experiences.

The Home Brew Boat and Photography

Barry has focused mostly on on-line sales for The Home Brew Boat this year, doing very little towpath trading. We have three canal festivals booked in the Birmingham area in September. Most unlike the past four years.

He’s refining the products he sells, according to what he’s found popular. There may be more changes afoot in the near future, concentrating more along the distilling and spirits making line. That is more his area of expertise having been involved with ‘Still Spirits‘, the  distilling supply company whom Barry dealt with in New Zealand, prior to moving to the UK. So … if you want to know about distilling, the legalities of it and ‘how to do it safely and successfully for personal consumption only’, give him a call or email via the contact us page.

Last year Barry was invited to work with PayPal  together with an international freight company and which uses a website plugin to expand the reach of his business. It means his wicked website is translated into the language of the country where it is viewed so is able to have products delivered across the globe. The customer pays the UK plus extra international postage when ordering.  Barry organises the courier to the depot at Heathrow, and PayPal or their freight partner, do the rest. It’s been working very successfully so far.

He’s also increased the range of waterways related Greeting Cards to 47, with nine new ones in the last batch. Photography continues to be a passion – just in a very different way to his years in New Zealand. 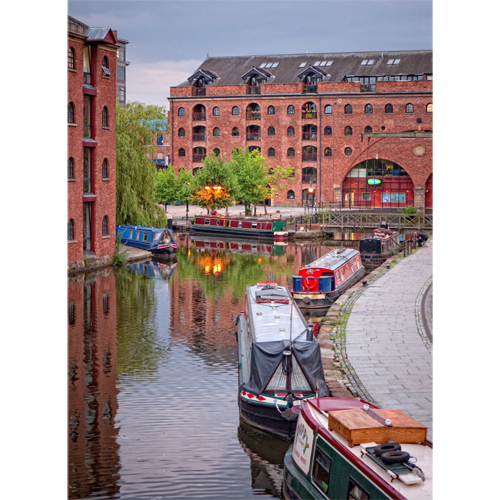 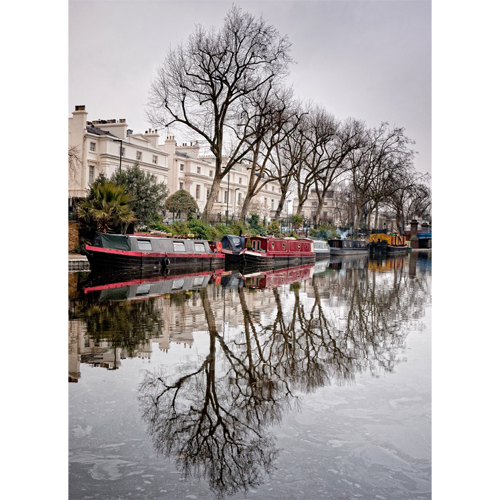 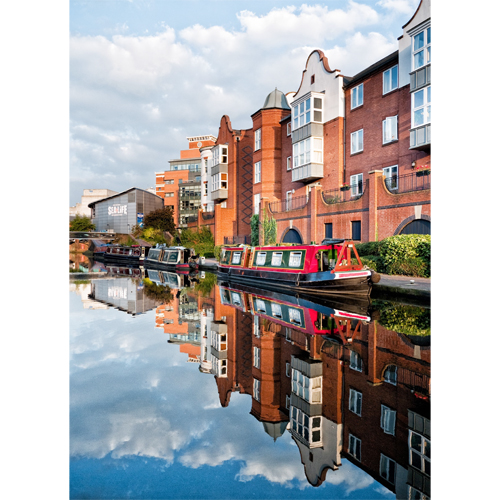 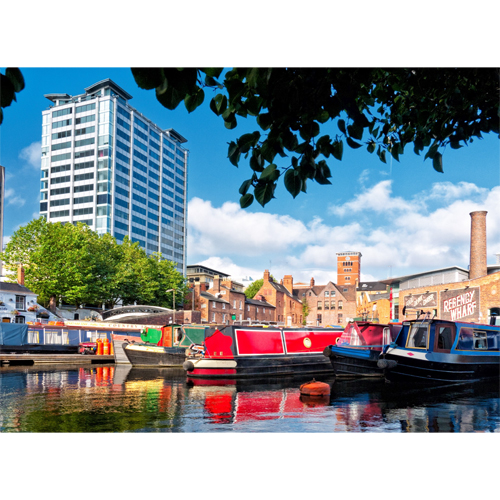 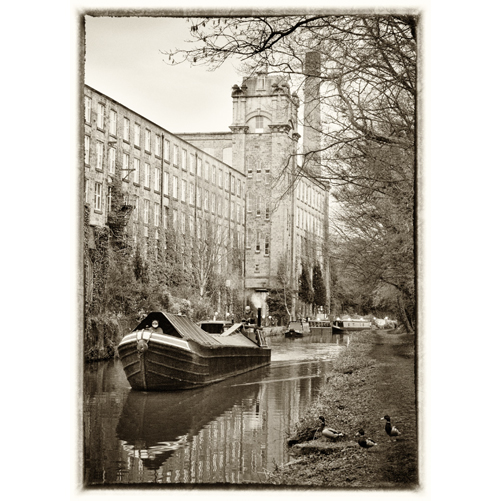 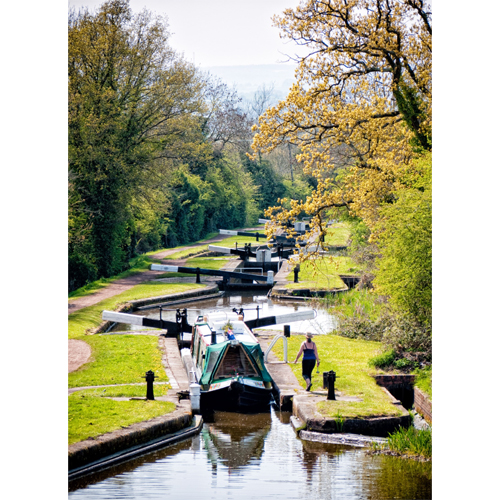 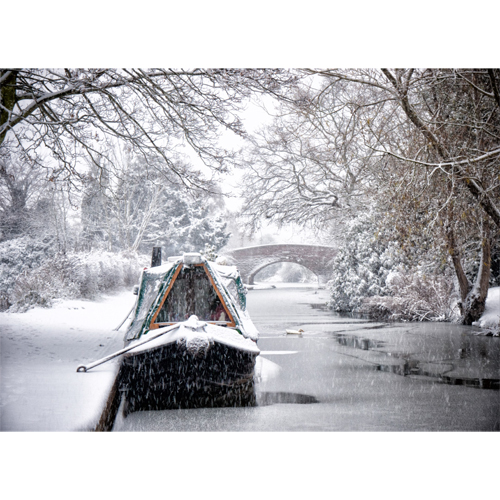 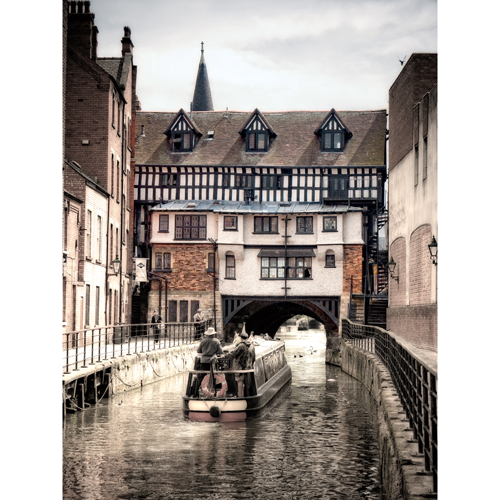 The Worcester, Birmingham and Droitwich Canal Society have purchased some of his cards to sell at events they attend, and they say they’ve been one of their best-sellers! So … if there’s anyone else out there who would like to stock a selection of Barry’s cards, please do contact us.

He’s had photographs published recently in The Wall Street Journal and Waterways World, and we started a weekly Wednesday ‘Guess the location and waterway’ competition on his ‘Inspirational Images of the UK Inland Waterways’ Facebook page. The person to guess correctly wins their choice of Greeting Card from Barry’s range. Most week’s we’re a card down – occasionally we stump everyone! Click the link and ‘like’ the page, check it out on a Wednesday (the time we publish is variable) – and have a go yourself … 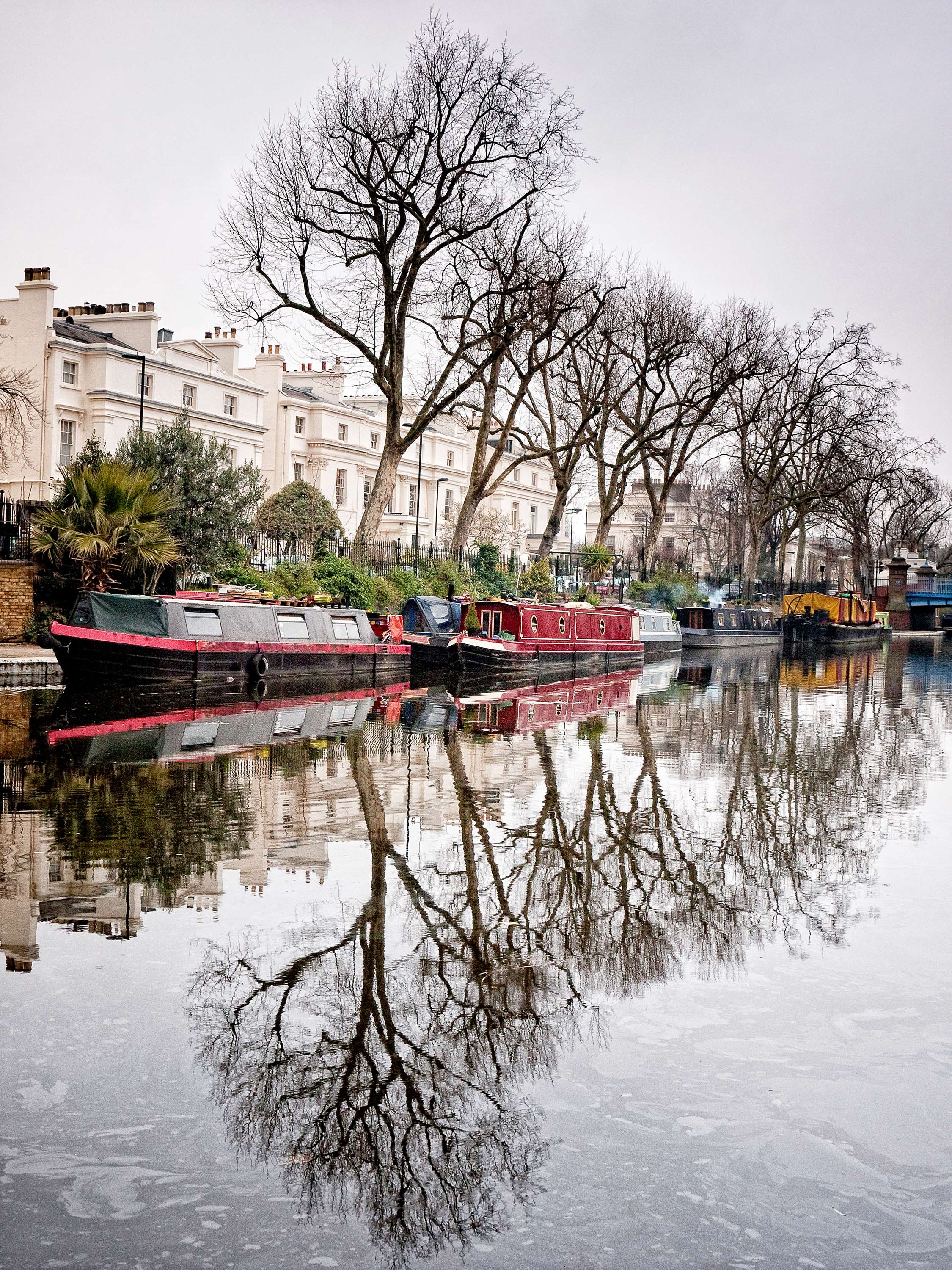 Reflections in Little Venice – published in The Wall Street Journal 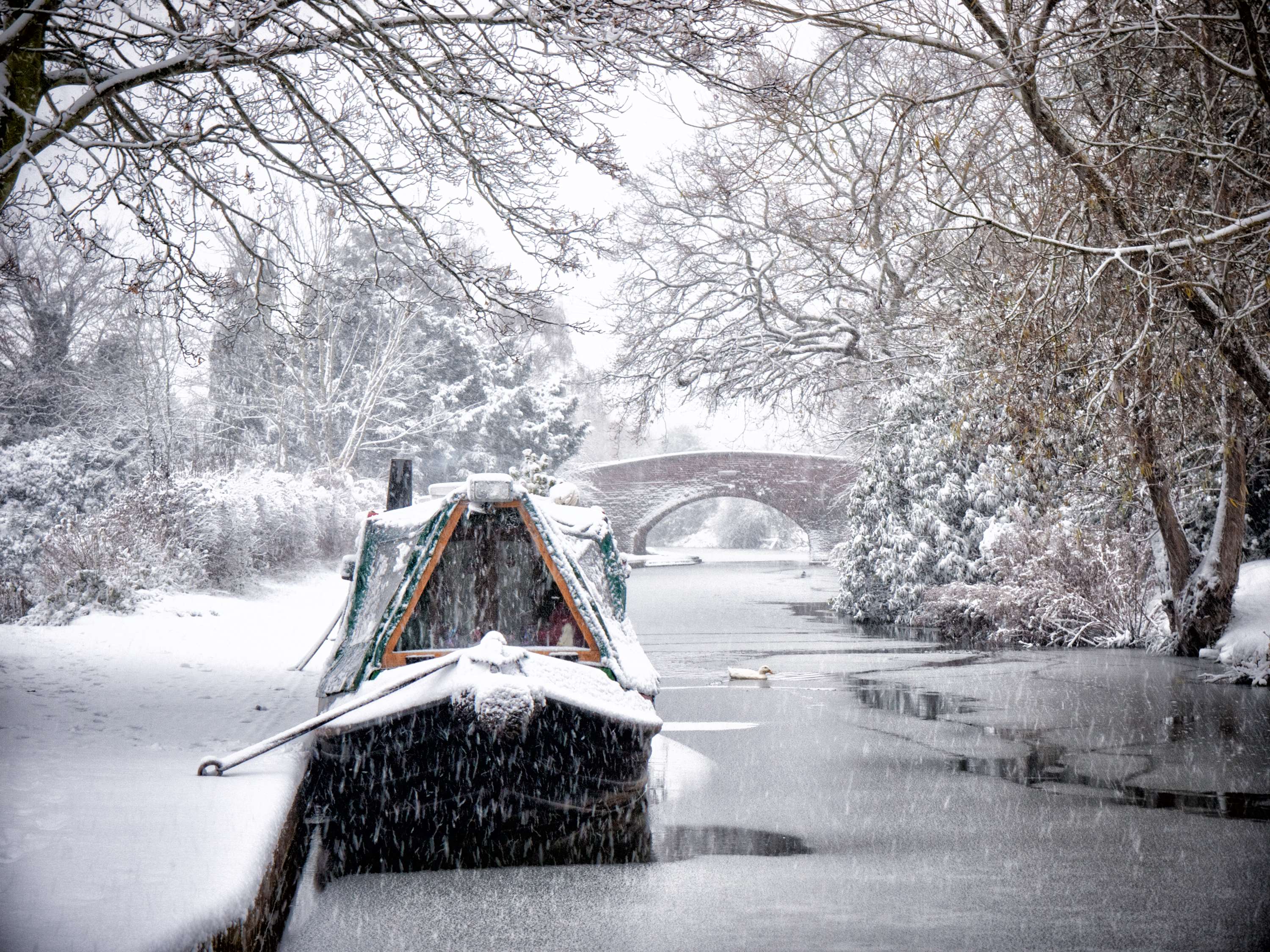 Also this year, I (Sandra) applied, was interviewed, and successfully passed the required ‘Google Ads’ (formerly ‘Google AdWords’) exams, to gain a self-employed consultant contract with a fabulous UK-based company called ‘Ad-Extra‘. Over the past years I’ve blogged, set up and managed websites, and marketed our services through a variety of  Social Media accounts, so this seemed like a natural progression.

One of the beauties of doing online work like this, is the flexibility of the ‘hours of work’ – which can be mostly adapted around our lifestyle. It’s early days yet, but after working with the owner Dom, and the select team, since March 2018, I can honestly say I’m looking forwarding to building up my contribution to helping people promote themselves to clients searching for local businesses.

For any canal-related businesses, appearing at the top of Google searches may be something that would increase your exposure and income. Sandra Willis from The Doggie Boat, also works for Ad-Extra. Click here and ‘meet the team‘!

These have been very small additions, so far, to our ‘portfolio’ 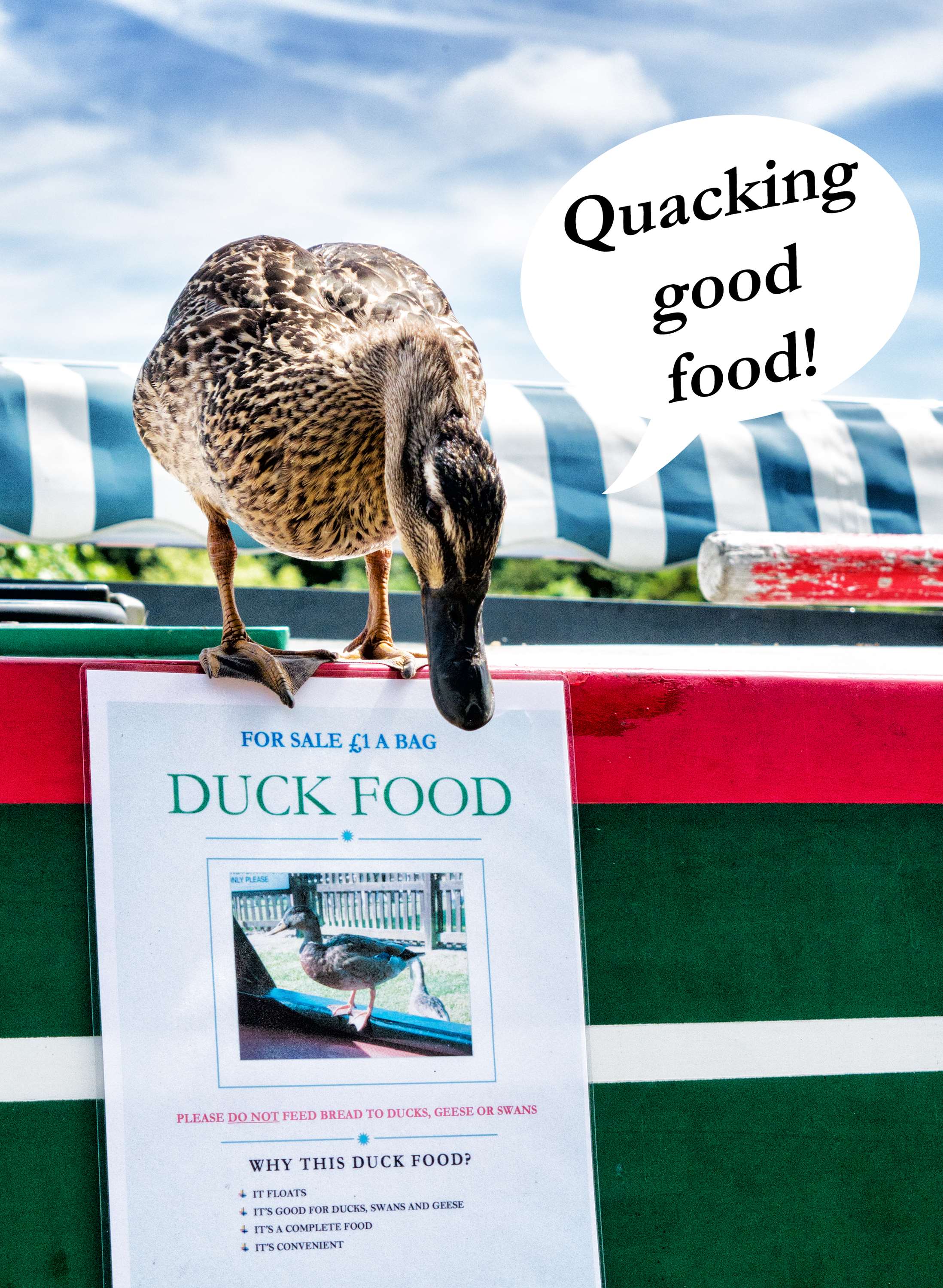 We’ve been travelling a lot, and entertaining visitors frequently, so weekends sitting on a busy towpath attempting to ply our wares just hasn’t really figured on our itinerary! However, they’re both ‘works in progress’, and projects we’ll consider building upon during the remainder of this summer, early autumn, and in 2019. 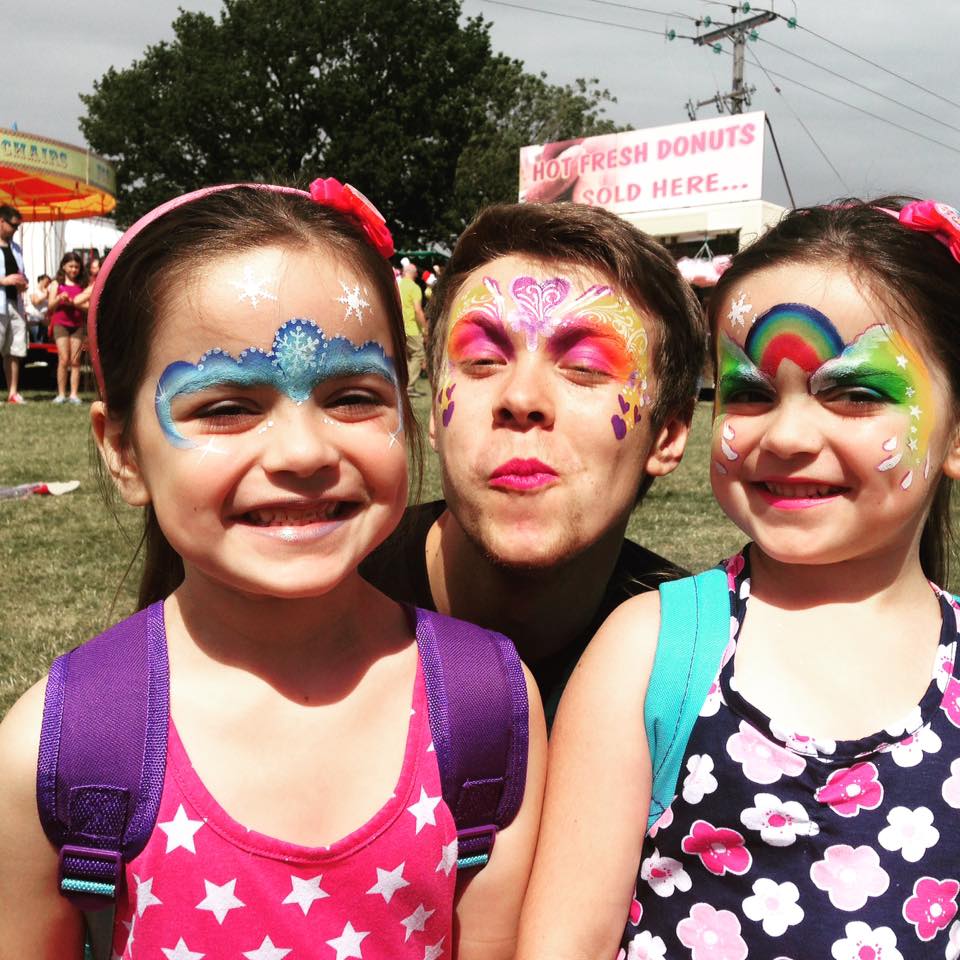 I loved being a facepainter since April 2014. It’s something I’d wanted to do for many years, and I believe (and was often told!) that I became rather good at it!

I only ever got to facepaint OFF the boat. Which meant hauling heaps of equipment from the boat to a land-based stall and setting it up. Or hiring a car and travelling to events (that cut into the meagre profits!). And when people asked me if I did parties, generally I had to say yes and no, desperately wanting to say yes – but knowing it depended upon where we were expecting to be located at the time of the event. I’m convinced that if we’d been in one place, for a length of time, I could’ve built up the business successfully. As it is, with the lifestyle we’re currently living and loving, I felt it wasn’t moving forward. So I’ve made the sad decision to let it go – for now. Who knows, one day I may pick up my brushes, sponges, paints, glitter and gems again … Watching children’s (and young and more mature adults!) faces light up when they look in the mirror has been akin to waving a magic wand and sprinkling fairy dust on them. Absolutely priceless. 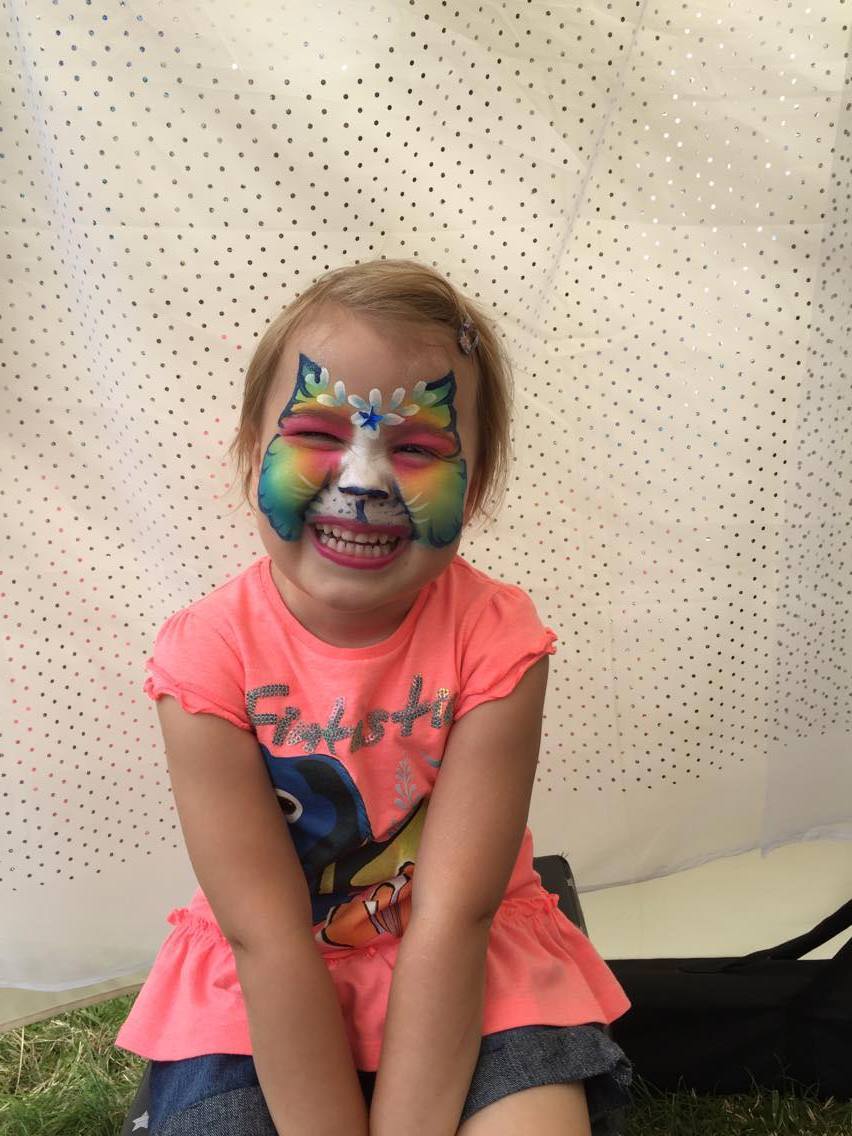 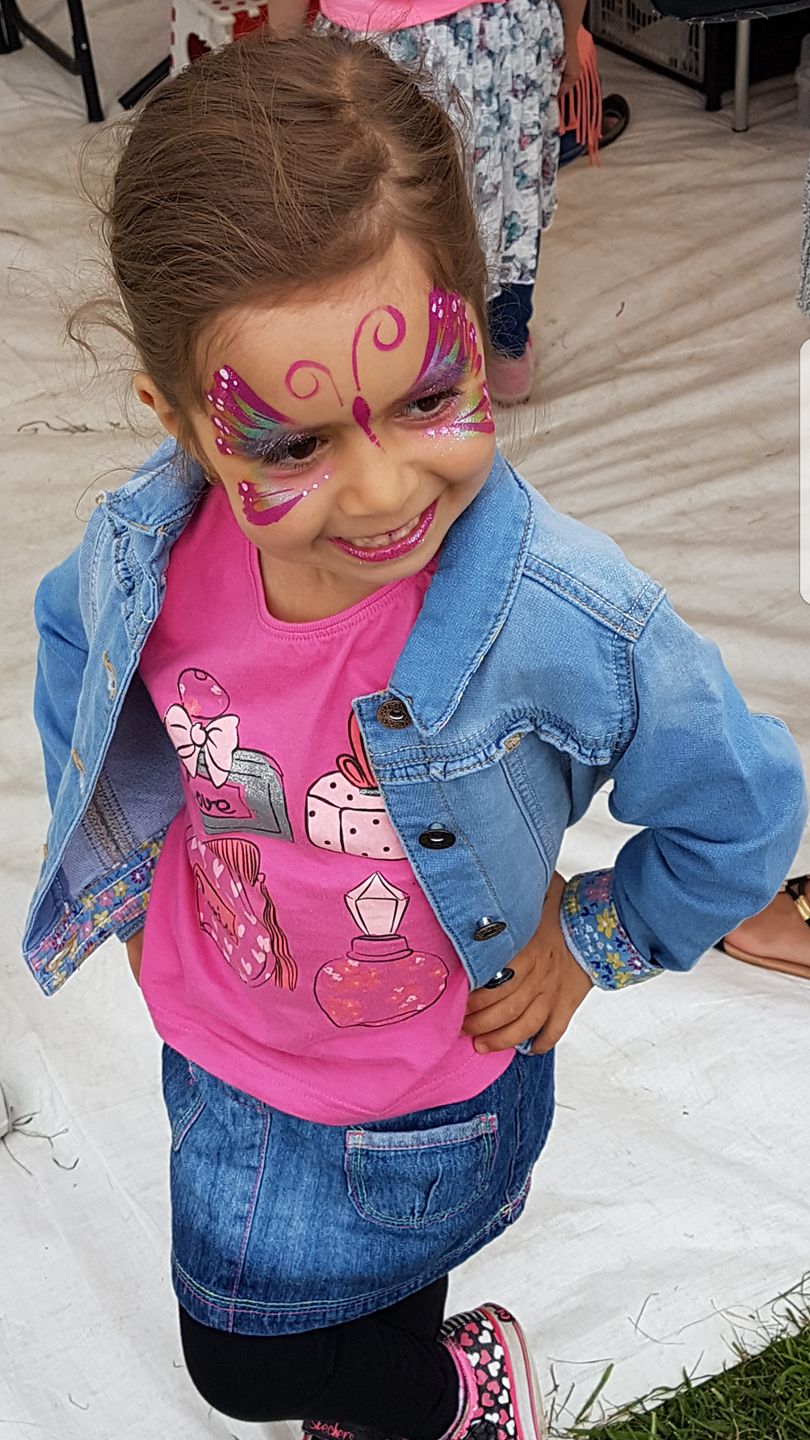 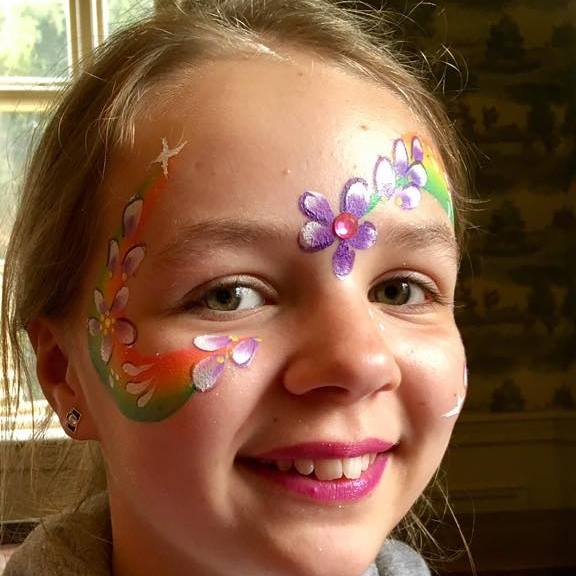 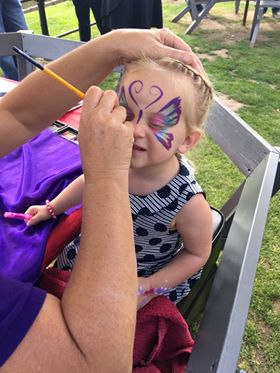 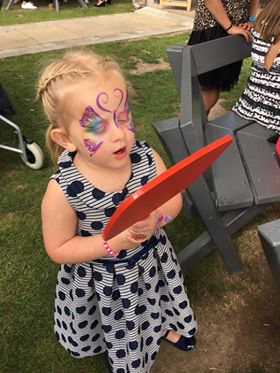 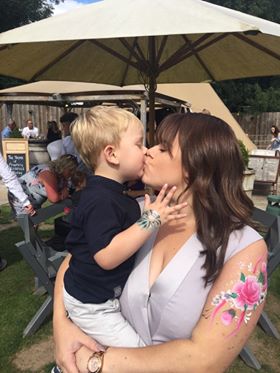 Our next kiwi guests arrive today, and are with us for three fabulous days. We’re currently moored adjacent to The Salt Barge, not far from Northwich. We’ve not stayed here previously, but will definitely do so again. A marvellous mooring and outstanding proper British pub.

On 25th July Barry’s older brother Ray arrives for three weeks. We recently heard his younger brother Peter has also chosen 2018 to pop in for a cuppa – or most likely something rather stronger! He’s literally popping in one day and out the next. But it’ll be amazing to see them both.

And yes, in between and during, we’ll both be fitting in ‘work’. Following that, September we have three festivals booked. October, it’ll be noses to the grindstone, and we’ll be focussing on making our Lichfield Calendar Club store as successful as possible.

We don’t always get the balance as evenly weighted to either side as we’d like, but mostly it suits us living as we are. For now …