It’s getting a tad confusing catching up and posting our journeys – for us, never mind you the reader! Do bear with us while we attempt to. You’ll soon realise, due to the nature of circumstances around this time, that both Barry and Sandra have shared the writing, though the photography’s all Barry’s apart from a couple of wedding ones …

A diversion to Lichfield

Sandra left Areandare on Wednesday 9th May for her sister Katherine’s 60th celebrations, while Barry continued to Parbold, then caught a train to the surprise 60th in Lichfield, returning to Areandare with Sandra on Sunday 13th May. Our diary in May was already chock-a-block with boating and family events. 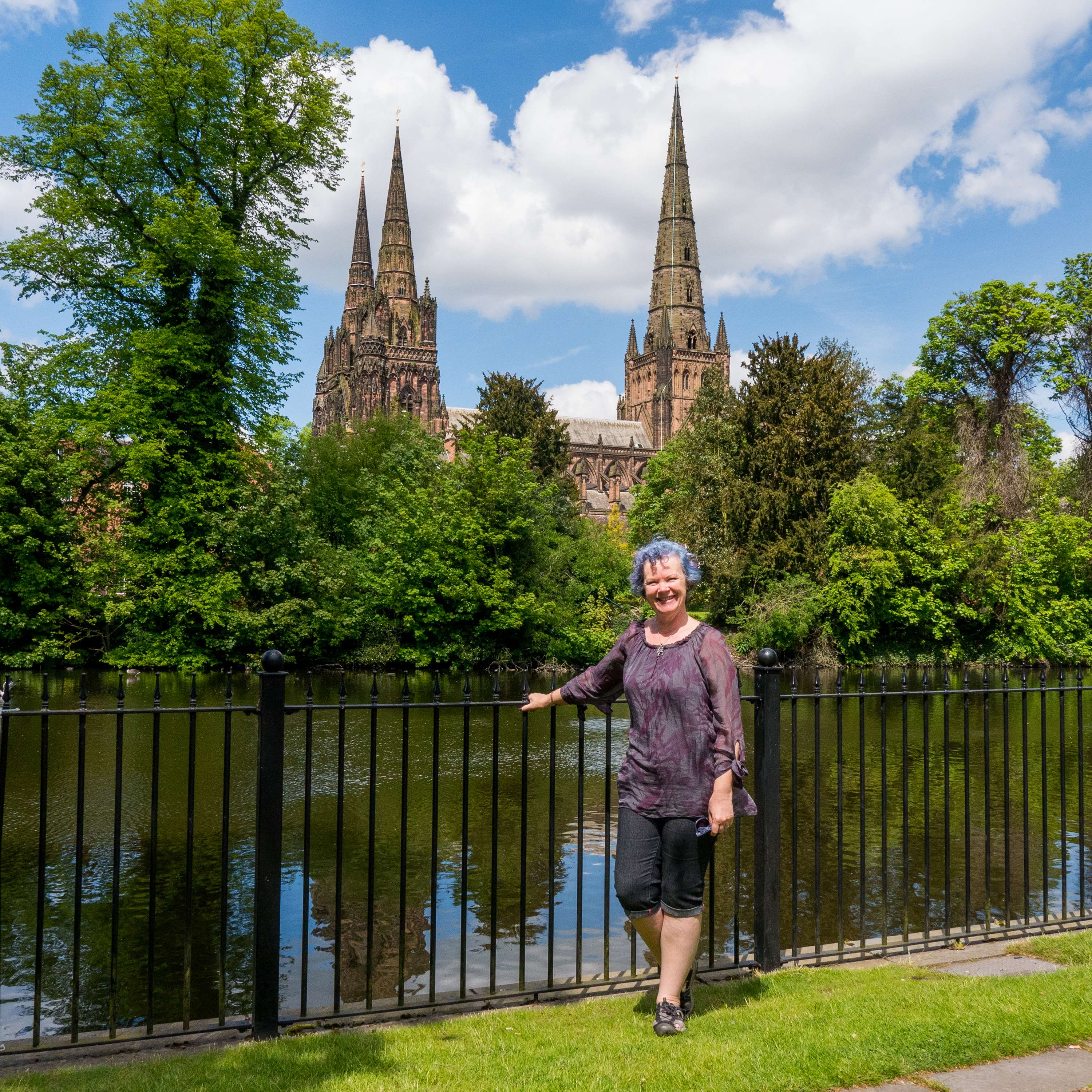 We managed a short walk around Lichfield the day after the party, to get re-aquainted with some fabulous views

We were heading ever closer to our booked Ribble Link crossing on Tuesday 15th May – an experience we’d been greatly anticipating; admittedly Sandra with trepidation, Barry with excitement. The link cost £5.4 million and was completed in two years, opening in  2002, to connect the Leeds Liverpool and Lancaster Canals. In order to navigate the Link, boaters must book in advance. The timings of the passage are dependant on the tide, and, as we discovered, there’s limited availability during its spring, summer and autumn opening times. 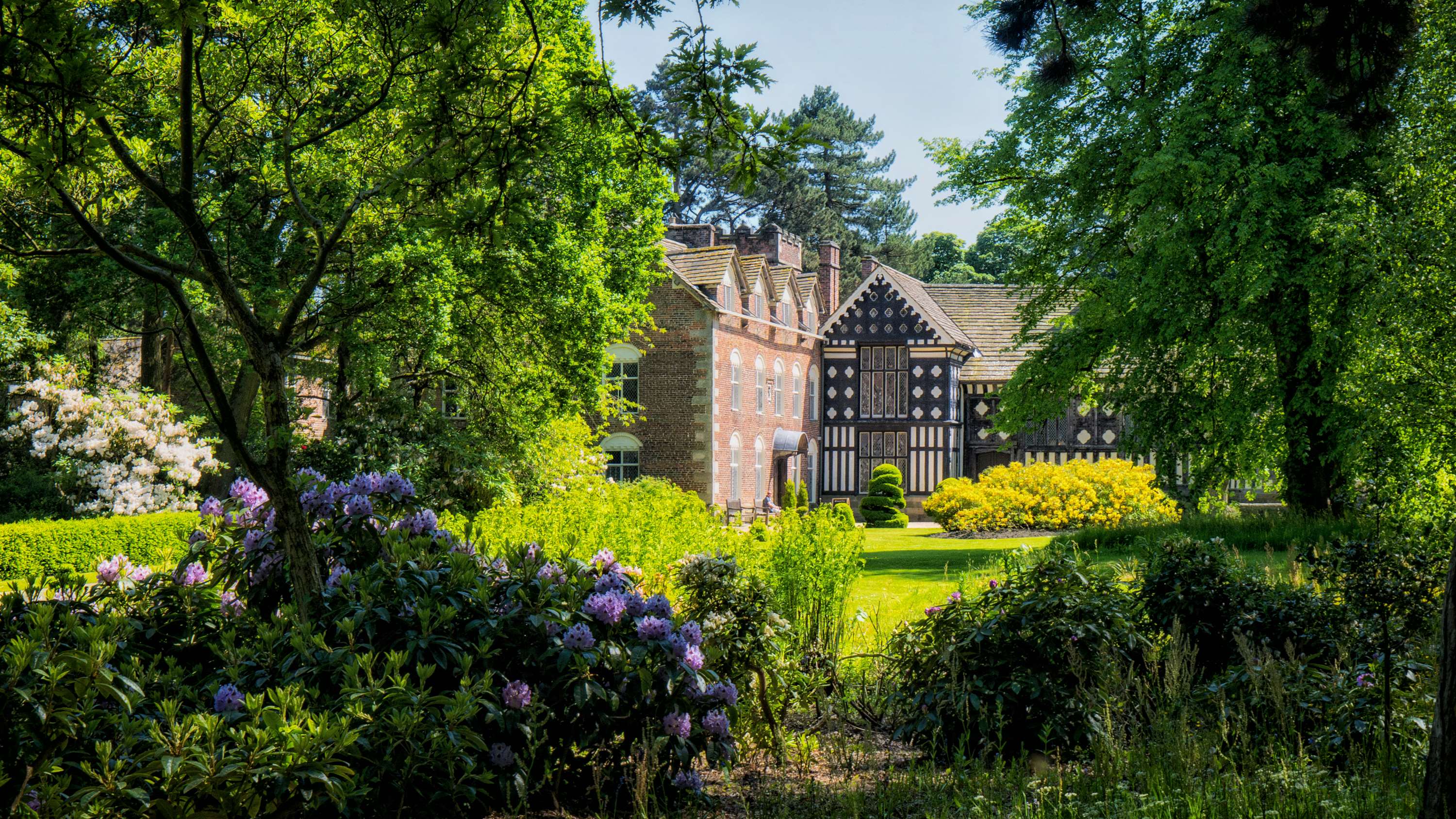 A National Trust property, but sadly they didn’t get an entry fee from Barry 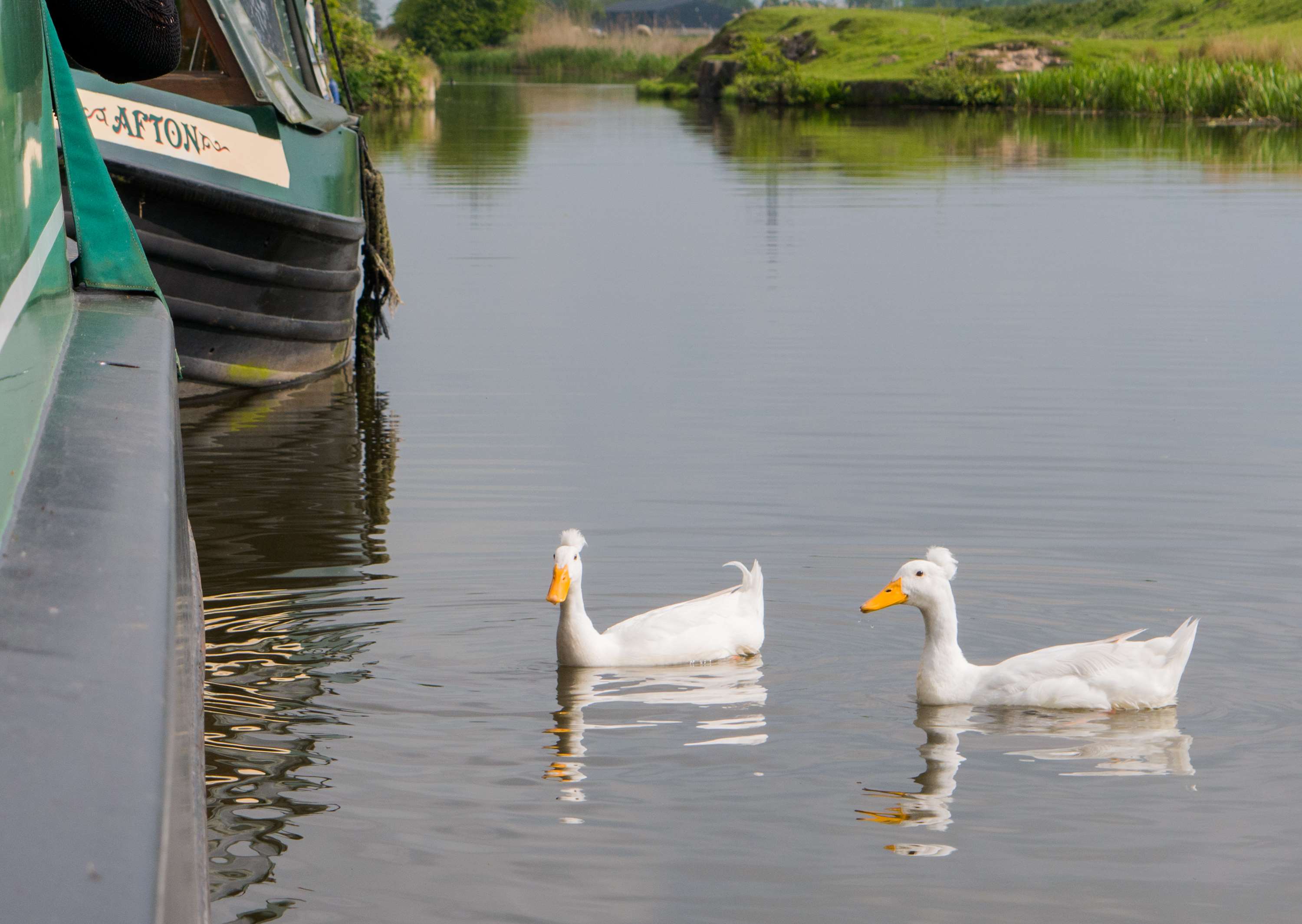 Of course you’ll be aware that our first crossing booking was cancelled, when we received the dreadful phone call informing us that Sandra’s mum had died. We called Enterprise and brought forward the car hire booking we’d had for Thursday 17th May, and drove down to Ombersley to meet Sandra’s sisters and begin initial arrangements.

A few days later we both travelled down to Exeter for our nephews’ wedding – we’d planned on collecting Sandra’s mum on the Thursday to take her there. Things could have gone very differently had her heart attack struck then. Despite the sadness, it was a glorious weekend of celebration.

The following week, Friday 25th May, was Sandra’s mum’s celebration of a life well lived. We were very fortunate to be able to get it arranged within 11 days of Irene’s death – in many cases in England funerals can’t be arranged for three to four weeks. Very different to what we’re used to in Gisborne, New Zealand, where they’re generally held within the week. And thankfully due to the timing, Sandra’s youngest daughter Kimberley was able to fly back from Nigeria for the family gathering to say farewell to a much loved mum, grandma and great-grandma.

We re-booked our passage for Sunday 27th May. There were just three consecutive dates available, and that particular one meant Sandra could do the crossing prior to heading to Lisa’s for their week away in Menorca.

It felt as though destiny was forcing us to forgo our planned inaugural journey, as that crossing was then cancelled by CRT due to a forecast of high winds.

We persisted fervently, and although Barry ended up traveling with two new crew members on board instead of Sandra, all finally flowed faultlessly on Monday 28th May. Sandra had put a plea on the blog for crew, as a final hope of success as it states you need at least two crew aboard.  Social media may be misused at times, but we find it incredibly helpful – as well as a fantastic way of keeping in touch with family, friends and folks we’ve met on our adventures.

In 2013, our first year on board Areandare, we moored at Tattenhall Marina for six months, as Barry had to return to New Zealand for the first application of his Spousal Sponsored Visa. During our time there we had some fabulous neighbours, Andy and Liz. Thankfully they’re blog readers, and phoned Barry a few hours after the call was made, offering their services. Well actually that’s not strictly true. Andy and his son Matt were offered, Liz declined! We grasped their generosity swiftly. While Barry was on the phone to Andy, Sandra was conversing with someone on Twitter who also offered her services. Rather than disappoint them, they’re coming on our return journey – today!

Andy and his son Matt jumped aboard Areandare at Tarleton, on Monday 28th May, and the crossing commenced accompanied by another four narrowboats. 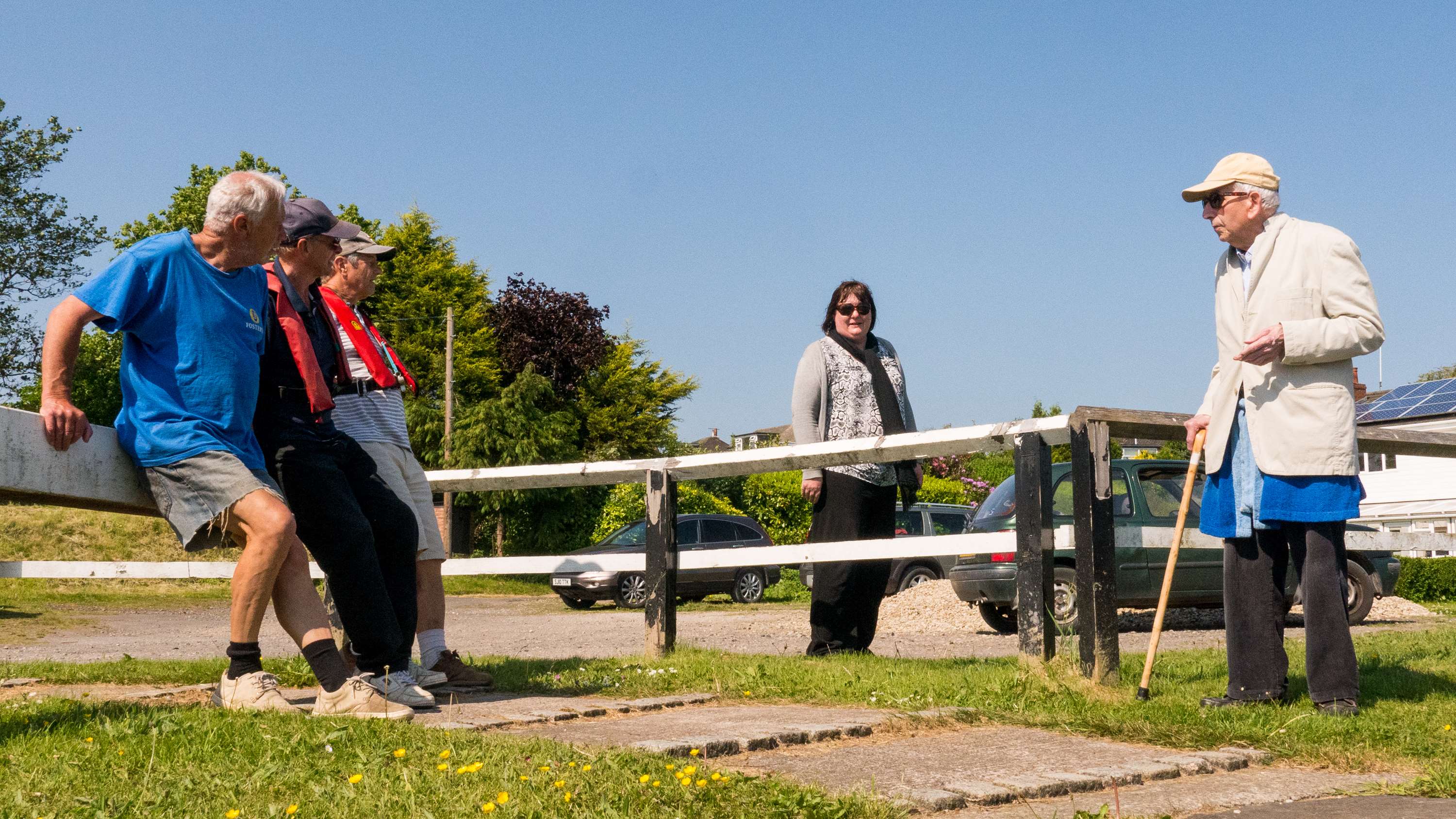 Liz watches nervously as the lock is being set ready for Areandare to head onto the River Douglas, carrying husband Andy and son Matt. On the right is Harry, the Lockkeeper!

We were the last to lock out onto The River Douglas, in the lock on our own, as there we were the odd one out!

When you motor out of the lock you need full revs as the tide is still coming in, so it’s a push against the tide, which around here is between 5-8 metres of shift. 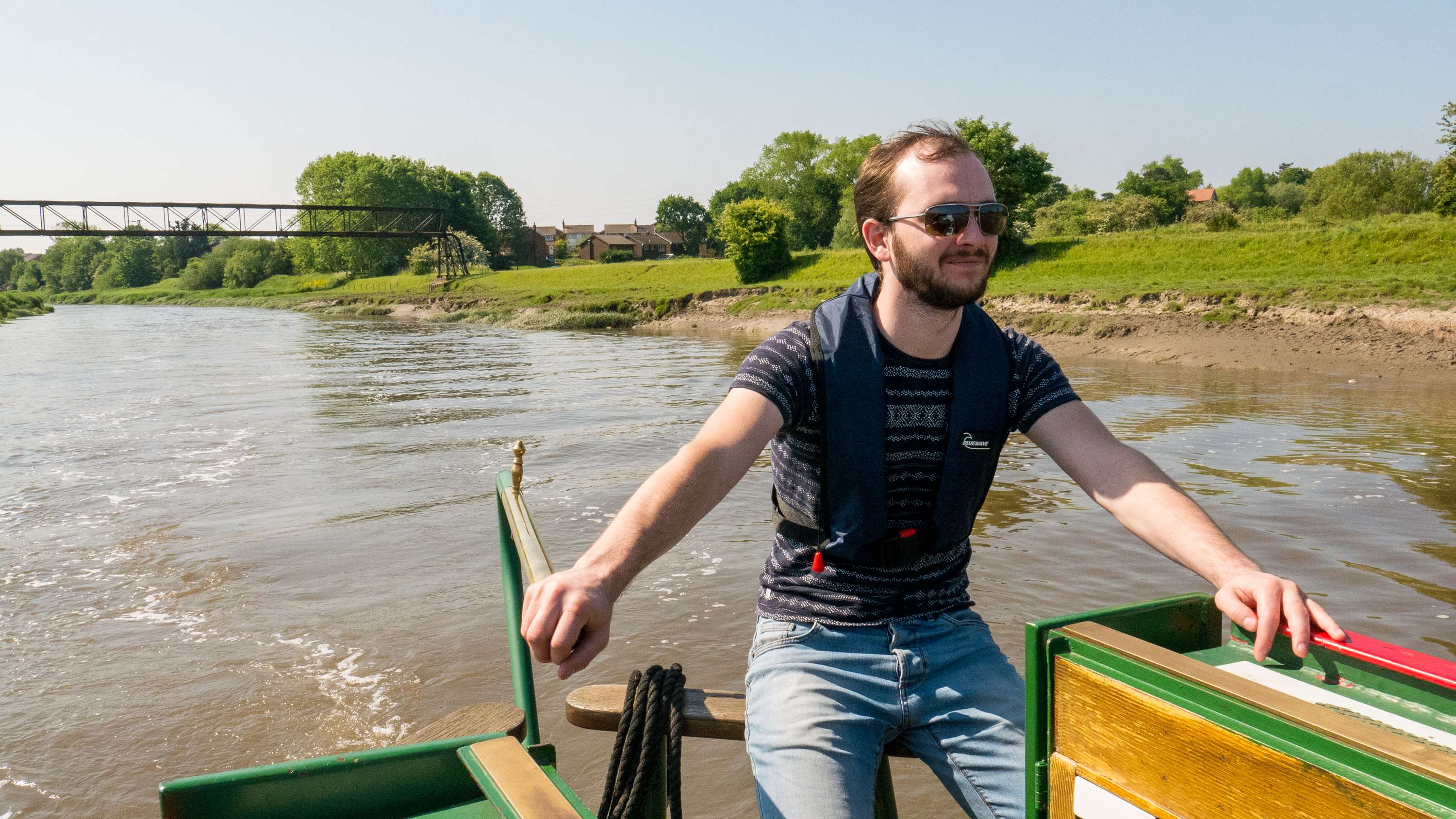 Past the marina near the river mouth, with a sunken boat nearby to encourage us along. The tide has slackened by now so we made good progress.

You’ve virtually at the mouth of The River Ribble (try saying that with a mouth full of pickled onions), before turning upstream and forcing against the now outgoing tide.

Savick Brook entrance is off to the left

Timing is critical to get over the sea lock with enough depth, under the bridge with enough clearance, and over the cill in the first river lock. An interesting exercise! 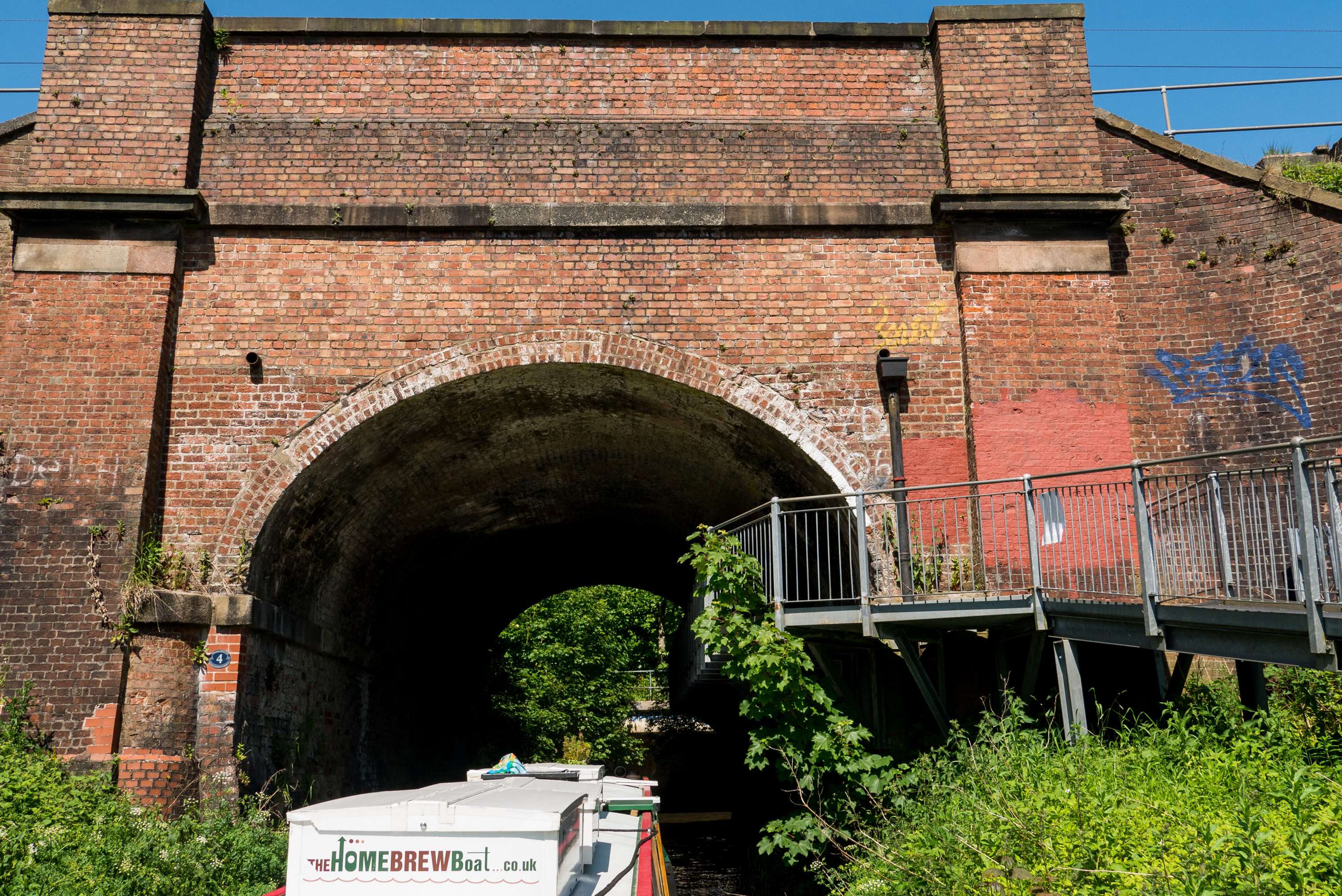 As the link was never an original canal, and has been completely built from scratch, they’ve had to improvise in places. 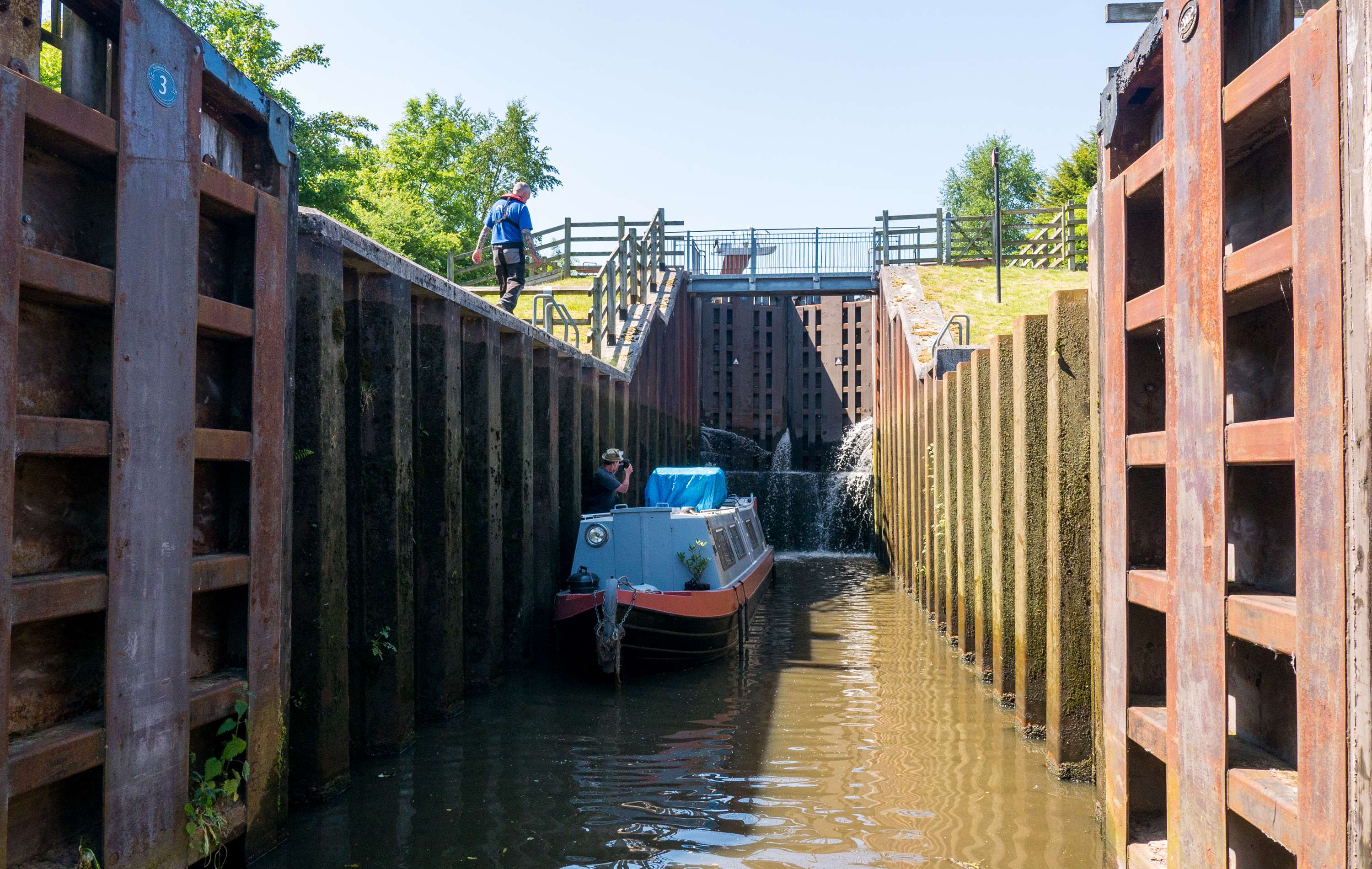 The sculpture at the top lock is a great feature 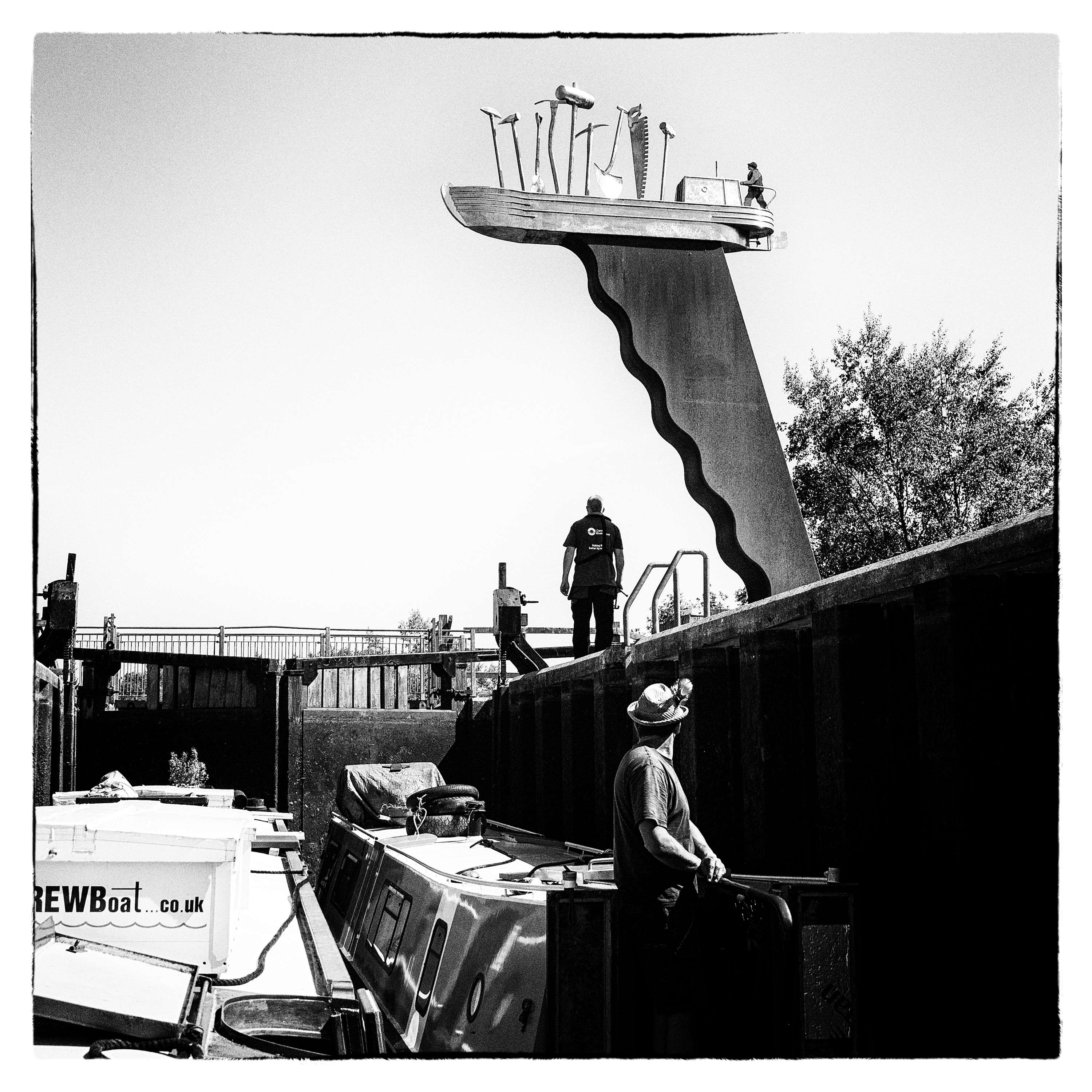 Barry and crew arrived safely into Preston and The Lancaster Canal, after an enjoyable and long-anticipated crossing. Liz picked up Andy and Matt from the top basin, with Andy muttering something about convincing Liz to do it in their boat someday!

The Lancaster Canal and Ribble return

It’s now Sunday 17th June and we’ve ‘done’ The Lancaster Canal to the end and back again. The next two posts will cover our experiences there – though to be honest mostly Barry’s experiences, as Sandra didn’t return on board until Tuesday 5th June.

We’re booked onto the return Ribble Link crossing today, with a tide time of 1429hrs – and a couple of new crew to share the adventure with. Barry is cool as a cucumber. Sandra isn’t nearly as anxious as she previously was. There may even be a live video posted on our Facebook page during the journey later this afternoon …

More to come next week …

5 thoughts on “Third time lucky for The Ribble Link!”