I’m not a winter person, especially of the British type! The past six months have felt more severe than I can previously recall, with an intensity of unremitting cold, damp and more than our normal share of frost and snow. Undoubtedly it’s a trait we’re known for, complaining about the weather – but it’s hard not to! Finally, a couple of weeks ago, we saw some fleeting signs of warmer days. The leaves have burst forth freshly on the trees and hedgerows. Unfortunately the three fine days were swiftly followed by a return to the dreariness and lowered temperatures.

Our journey on the Leeds Liverpool Canal was now taking us up into the Yorkshire Dales, and the scenery became even more spectacular as we travelled further towards Skipton. 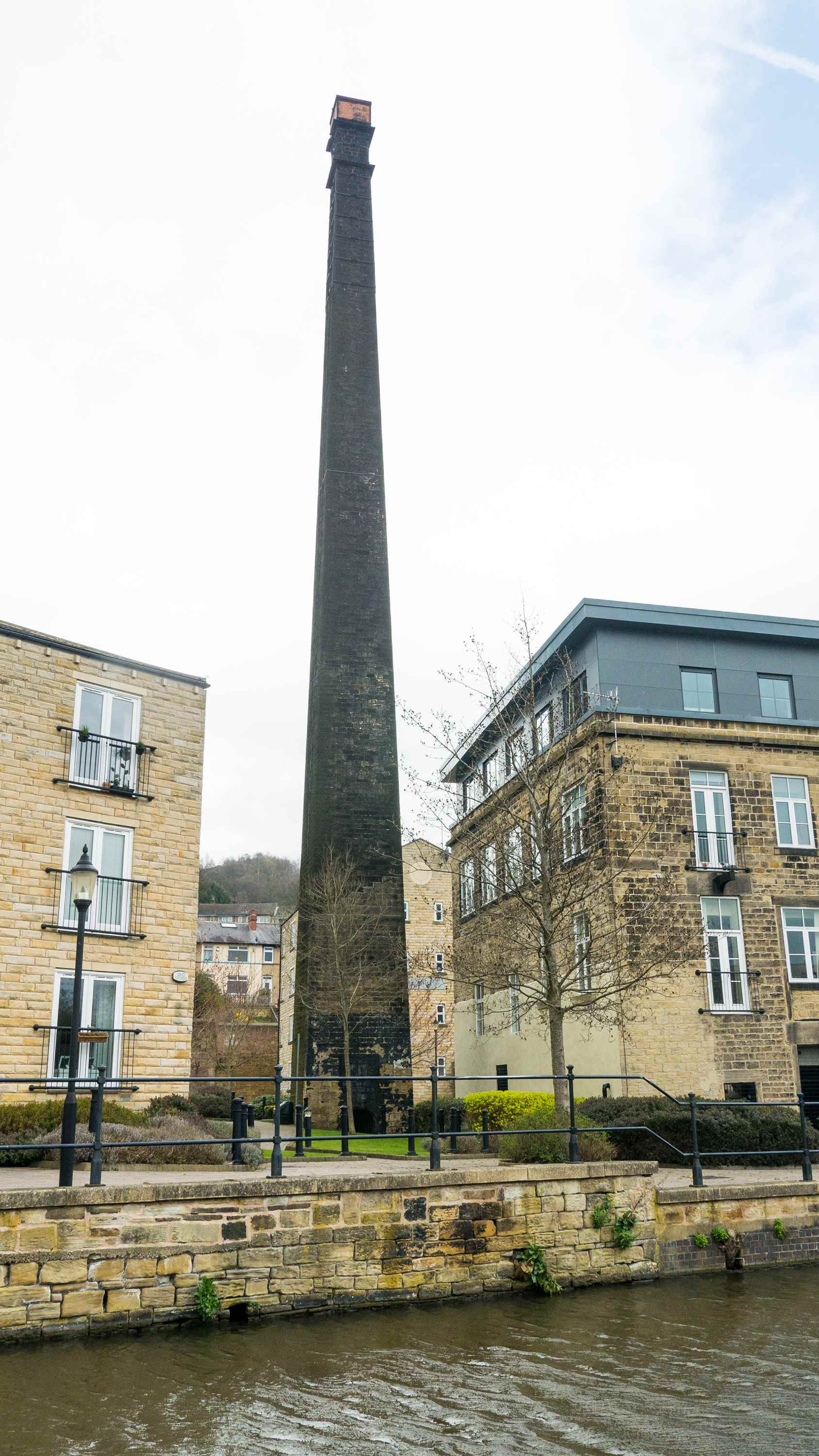 Tall chimneys from previous mill buildings are prevalent around this area 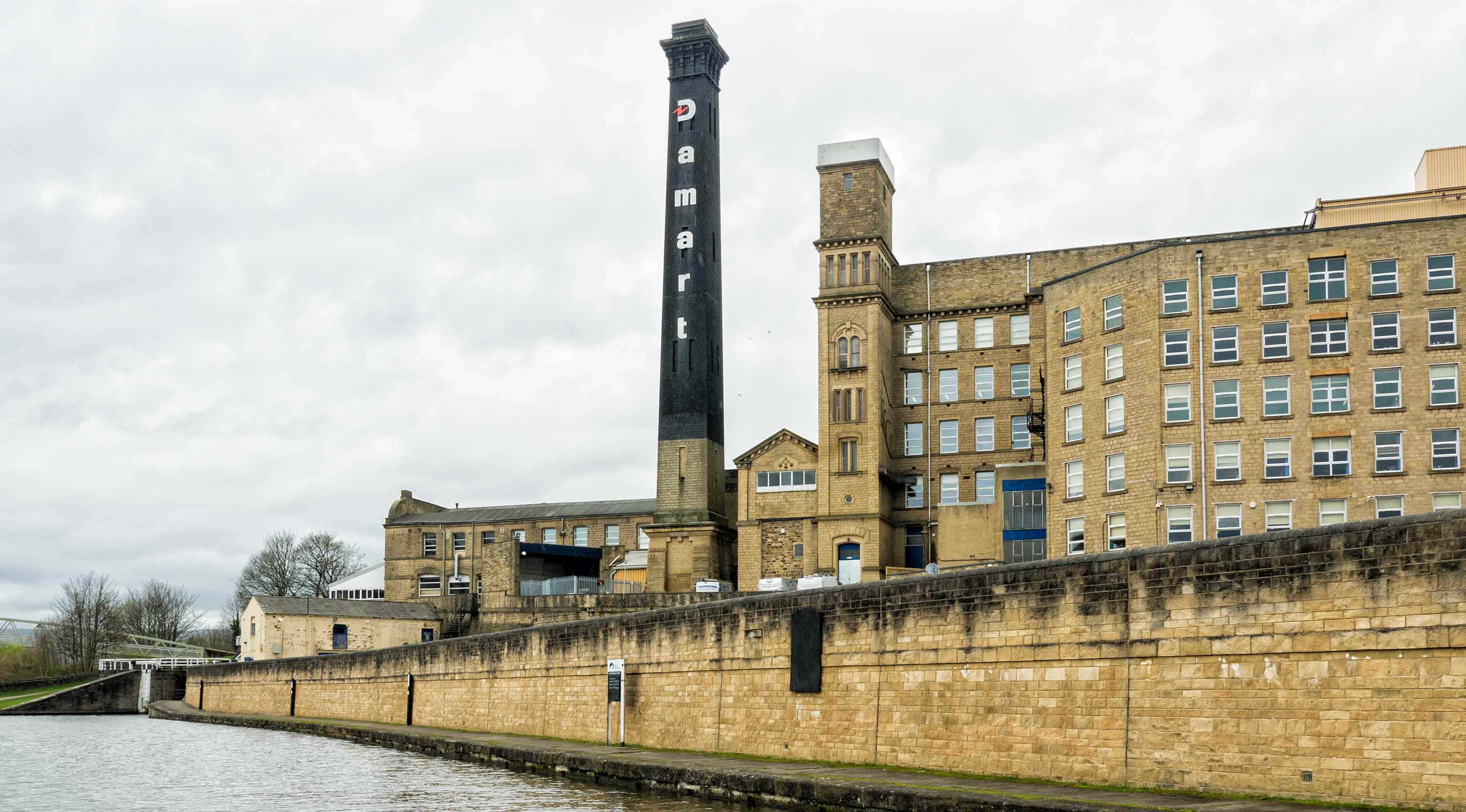 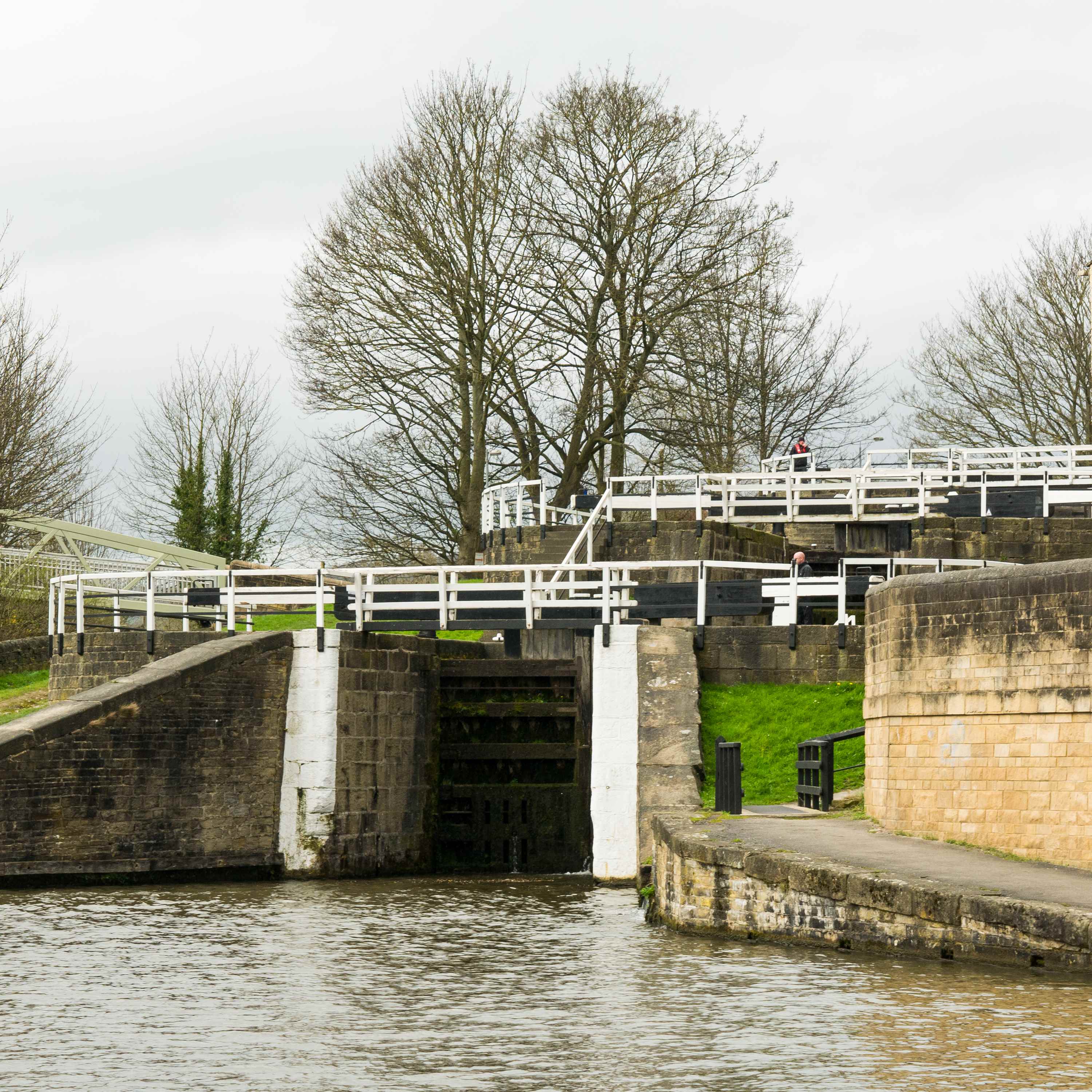 The bottom of the Bingley Three Rise 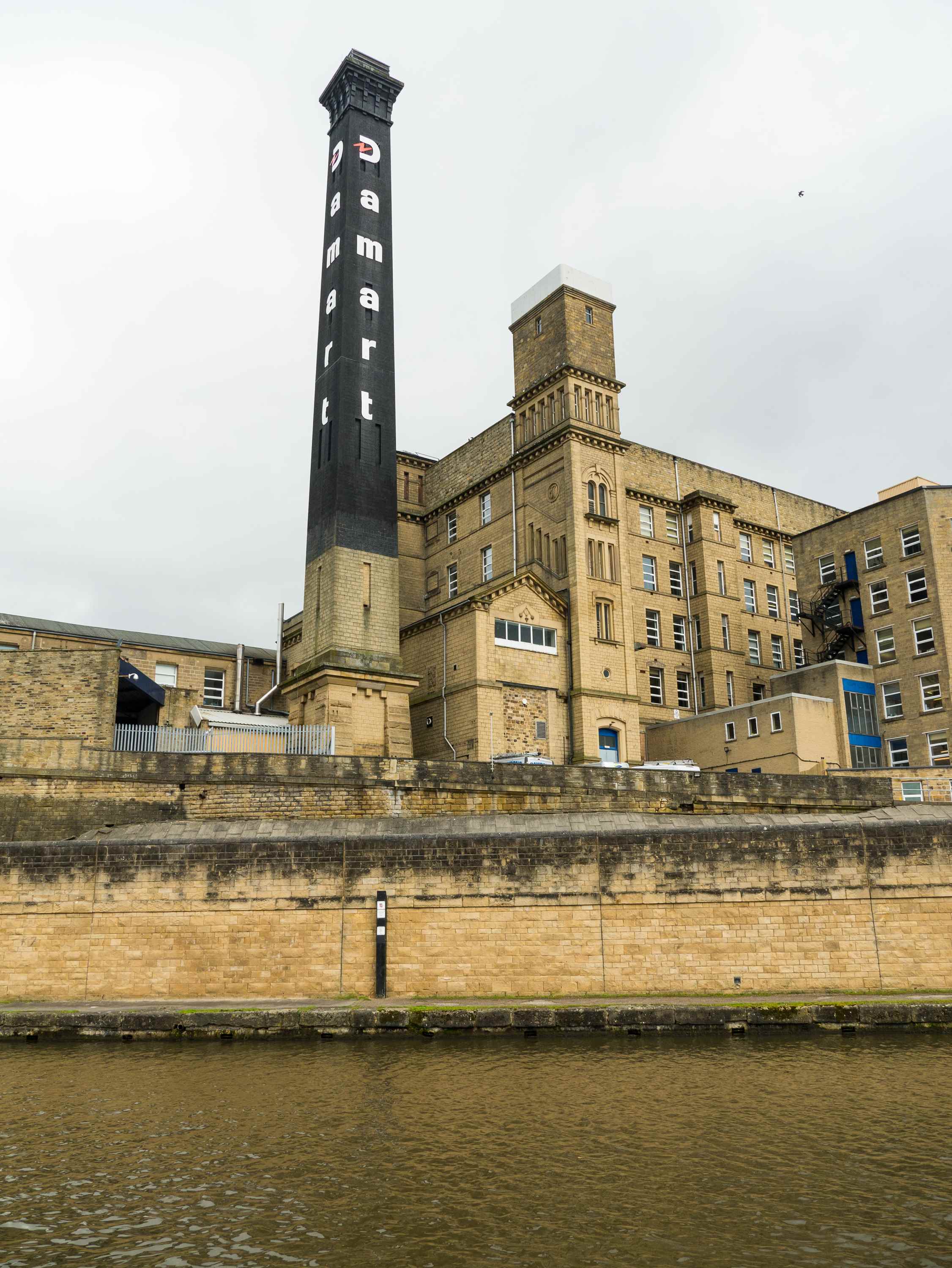 Stunning colours and shapes in this old building 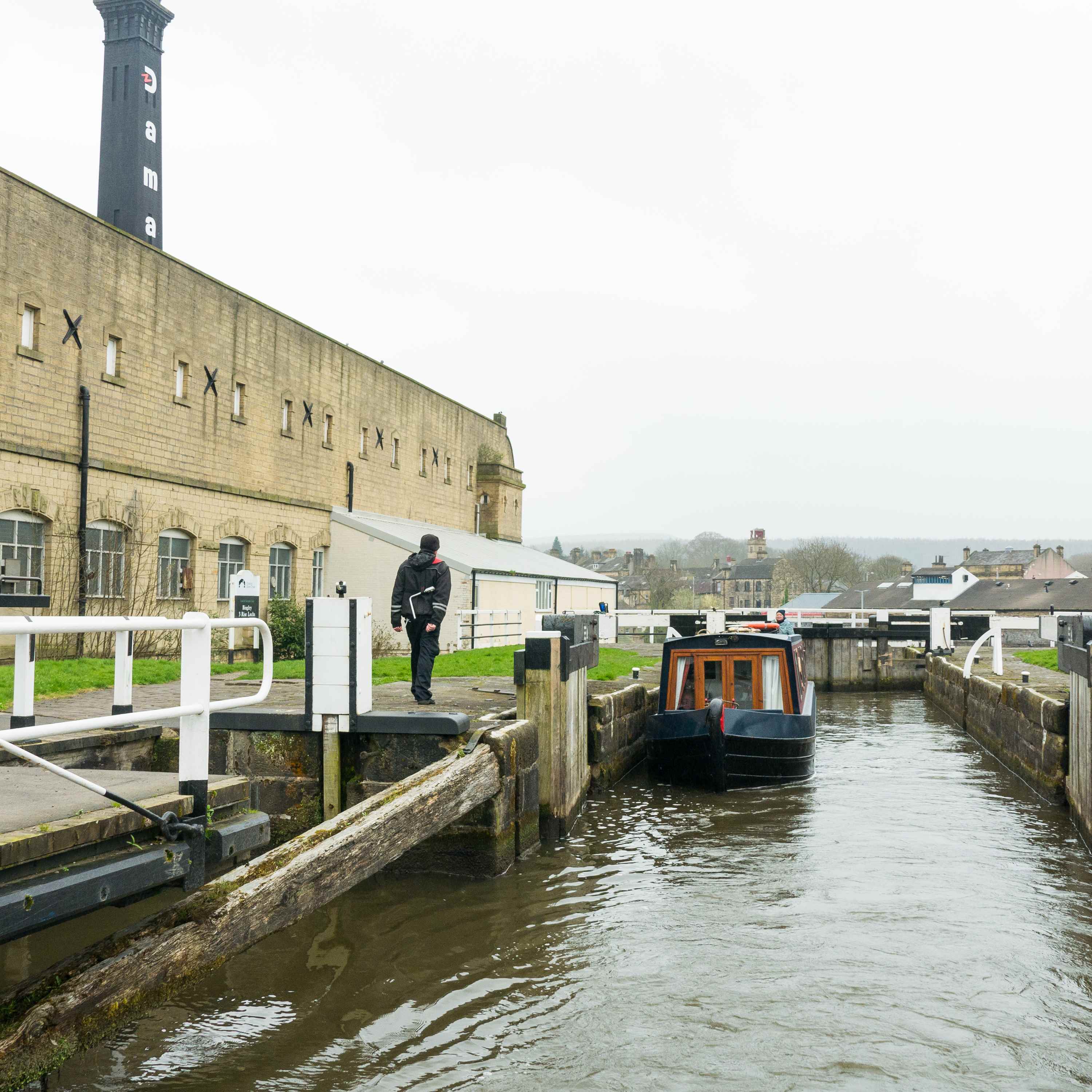 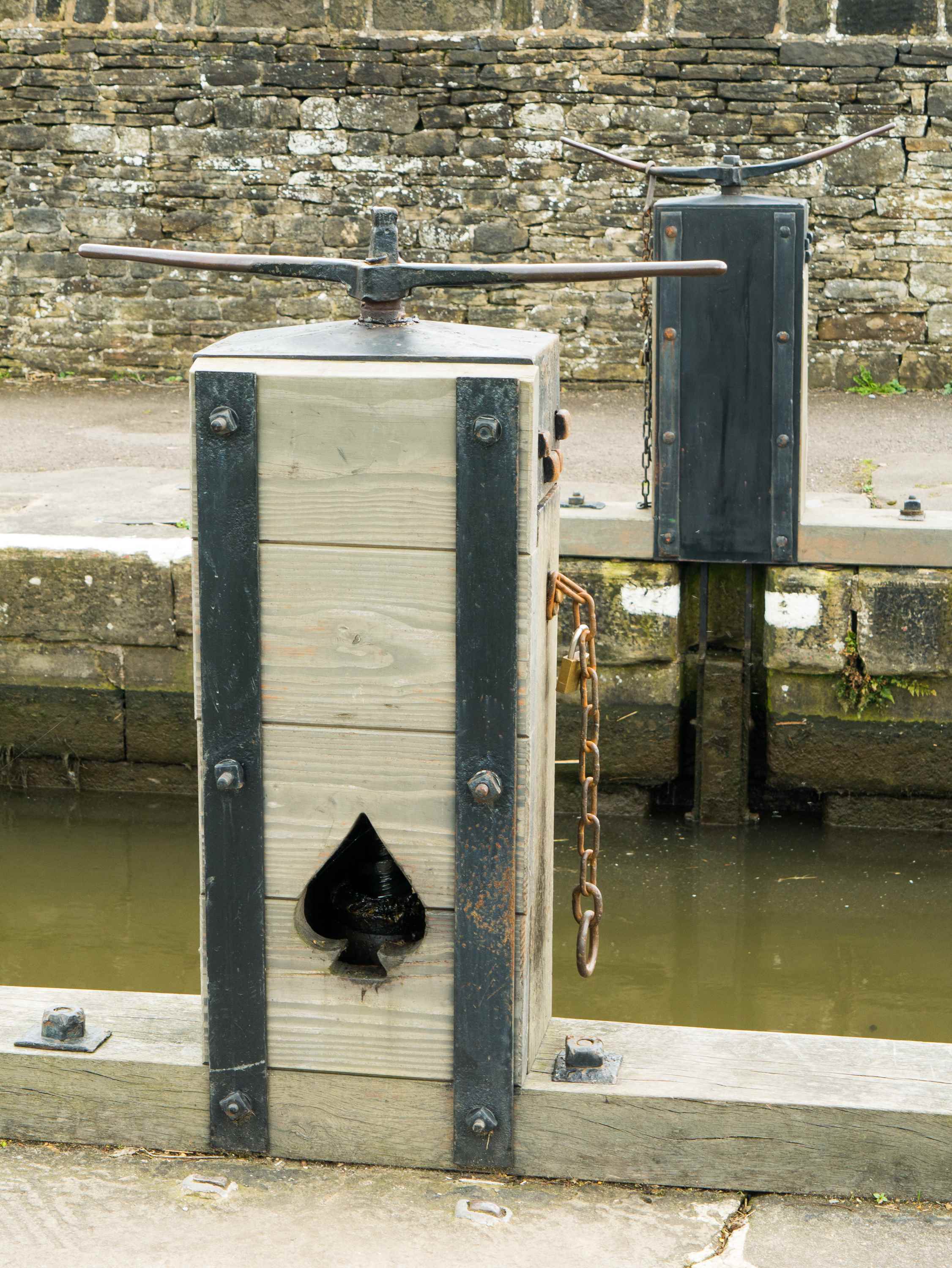 It’s only a short cruise from the Three Rise to the Five Rise, and we were fortunate that as we approached the latter another boat was just about to go up – so the lovely Lock-keeper drained the water he’d started to fill the bottom lock with and let us in – phew! Otherwise it’s likely we’d have had to wait until the next day to make the ascent. You’re not permitted to work the locks yourselves, there’s been a number of nasty incidents here and the locks are rather deep. Last time we were here, another Barry was working the locks, and had been doing so for 32 years. He’s now retired we were told, but still visits. 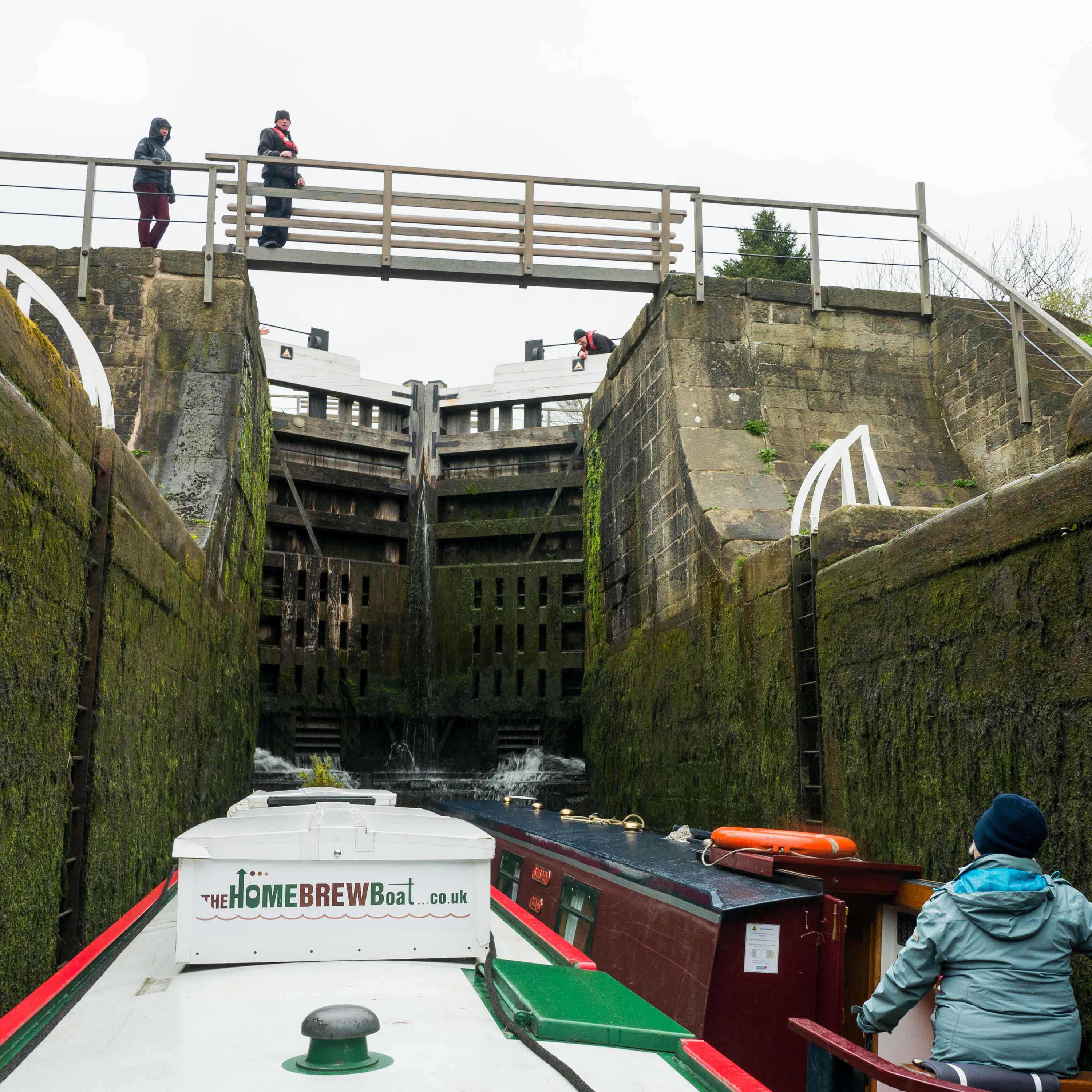 Barry and Areandare shared the locks with a Silsden hire boat – and a nervous lady driver bless her. The lock-keepers fill each lock slowly and carefully, always watchful for anything amiss. We felt in very safe hands. 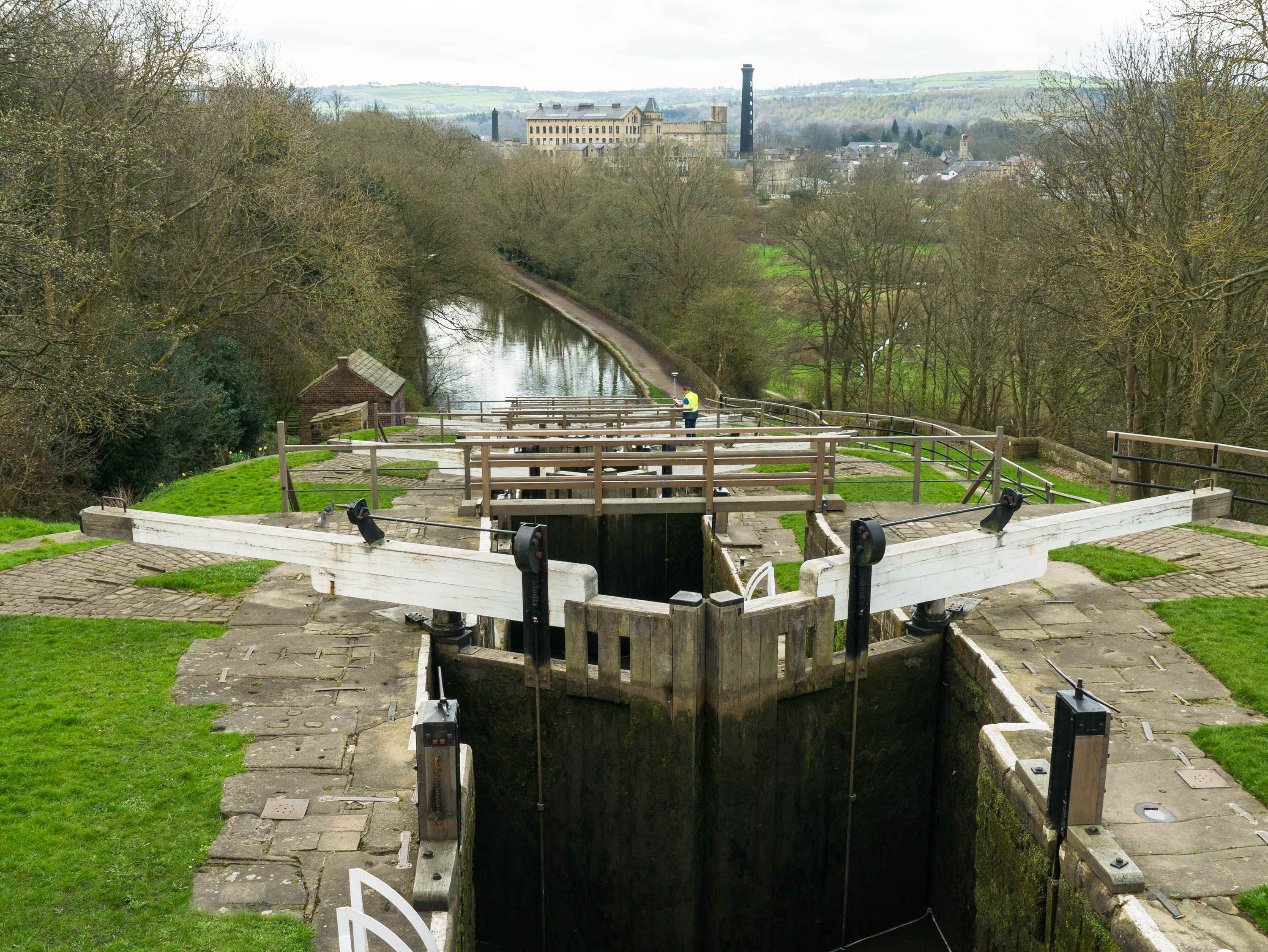 The Top lock of the Bingley Five Rise Staircase Locks, looking out into the distance. Superb view – which would’ve been improved by some sunshine! 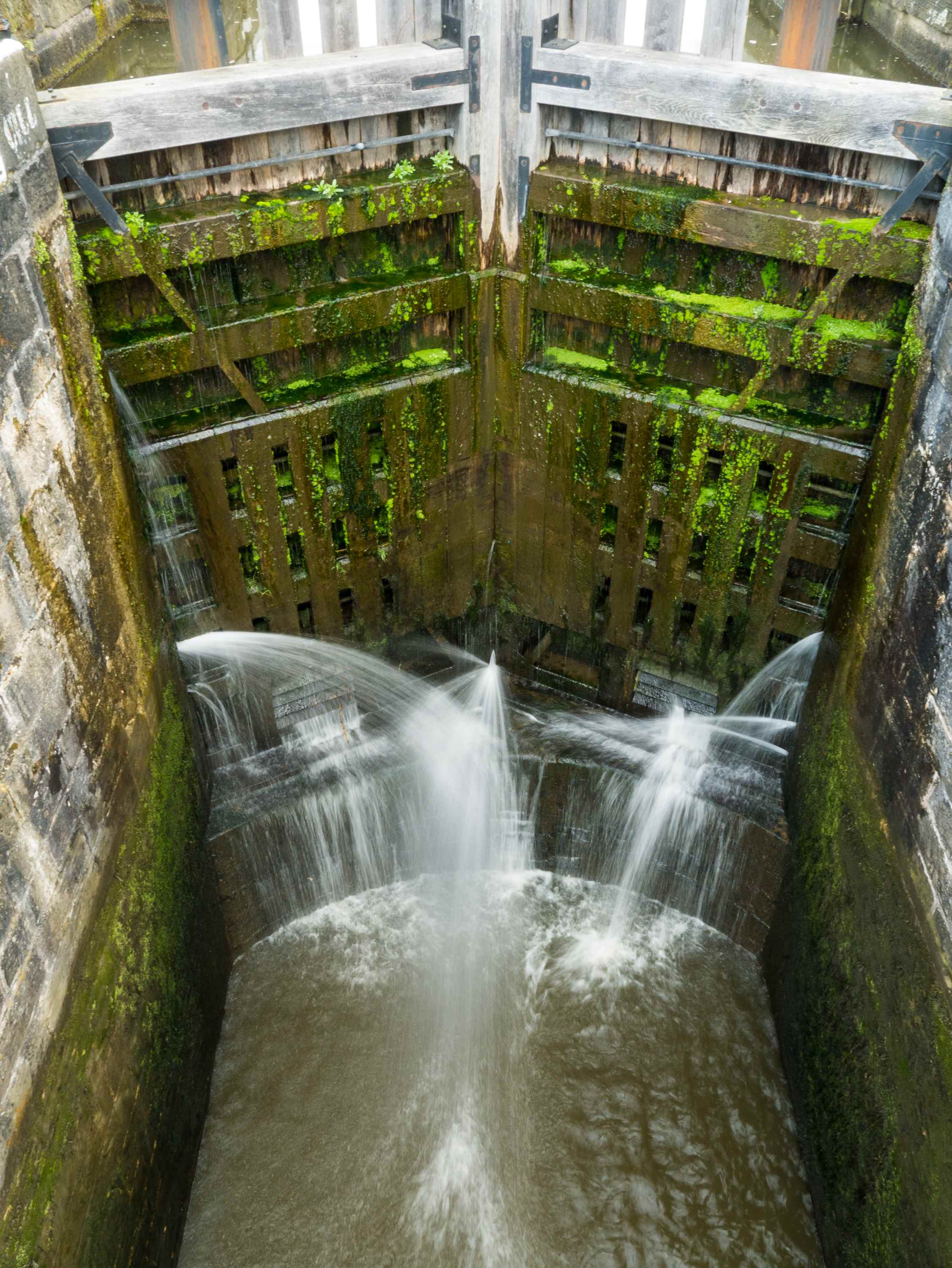 We spent a night at the top of the locks, so that Barry could attempt to get some finer images of the Five Rise. He firstly  helped out the CRT folks who were doing some routine maintenance on the locks, and did a spot of lock gate scraping. 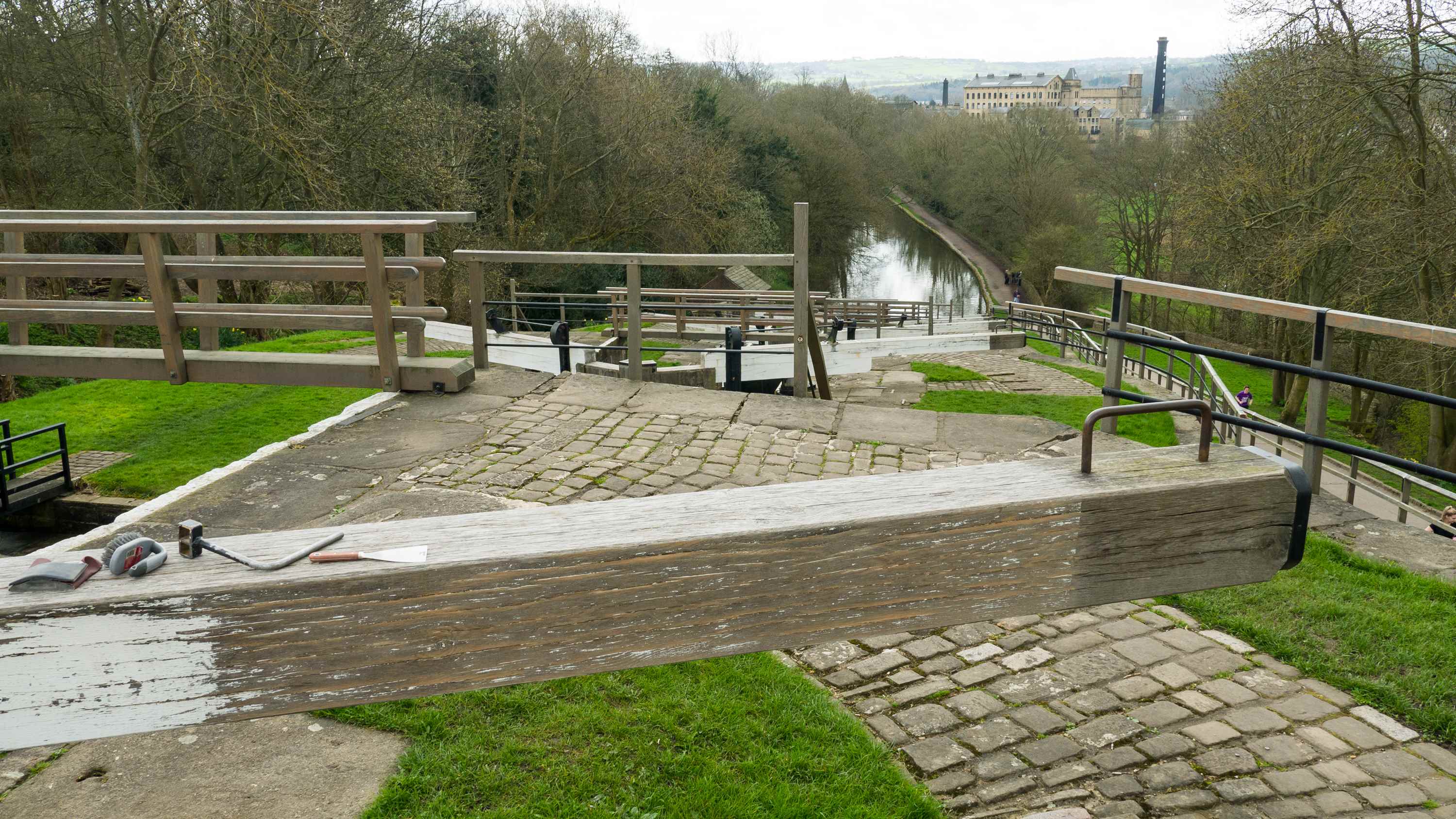 He’s got a gorgeous one from 2009 (showcasing my rather too ample rear end!), which is part of his Greeting Card range. He thinks he may have managed another fine one with a newly opened hotel boat emerging. If you’re reading this and you’re the people in the photo, post a comment or email us and we’ll send you a high res image and link to your website … 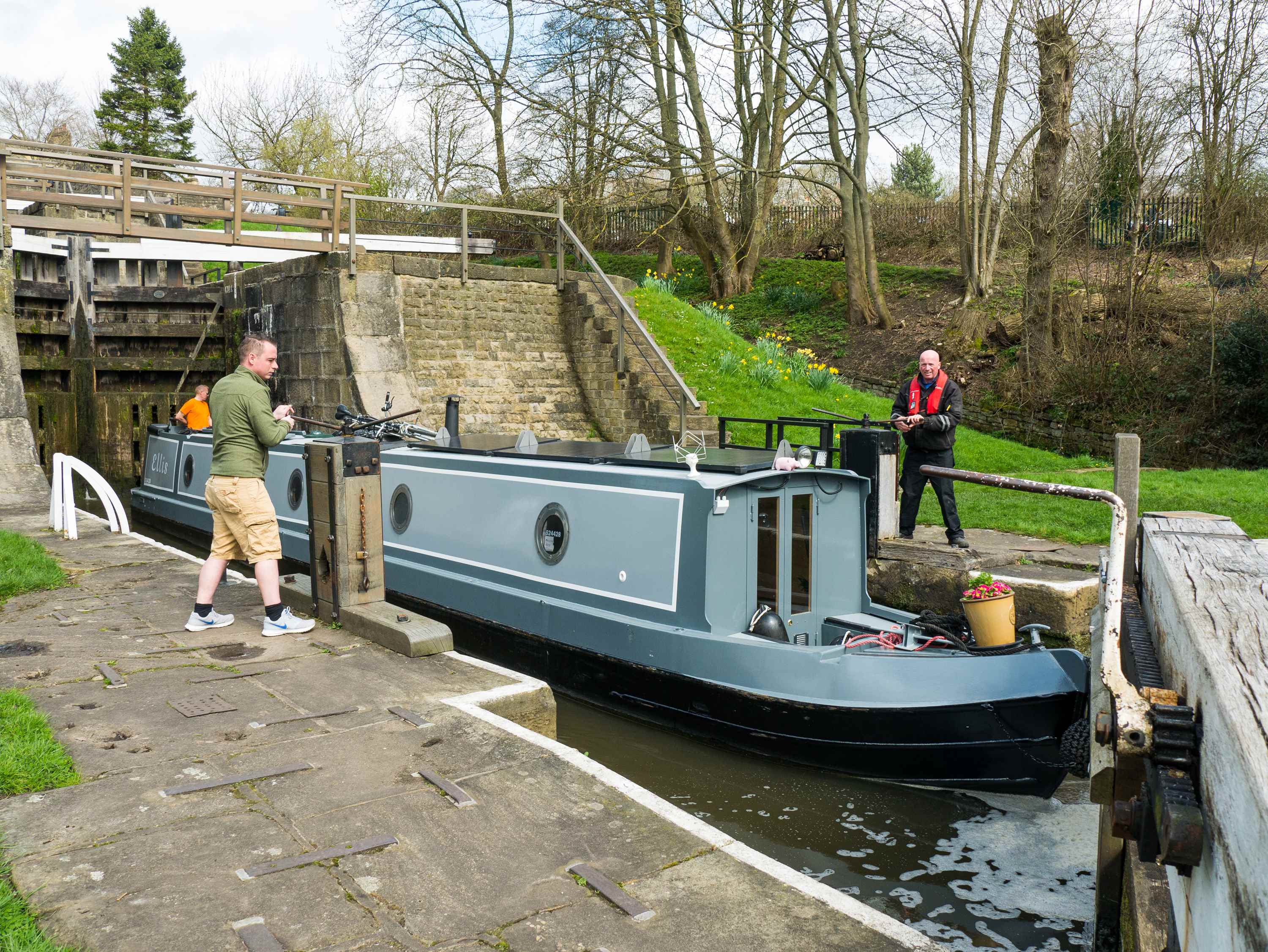 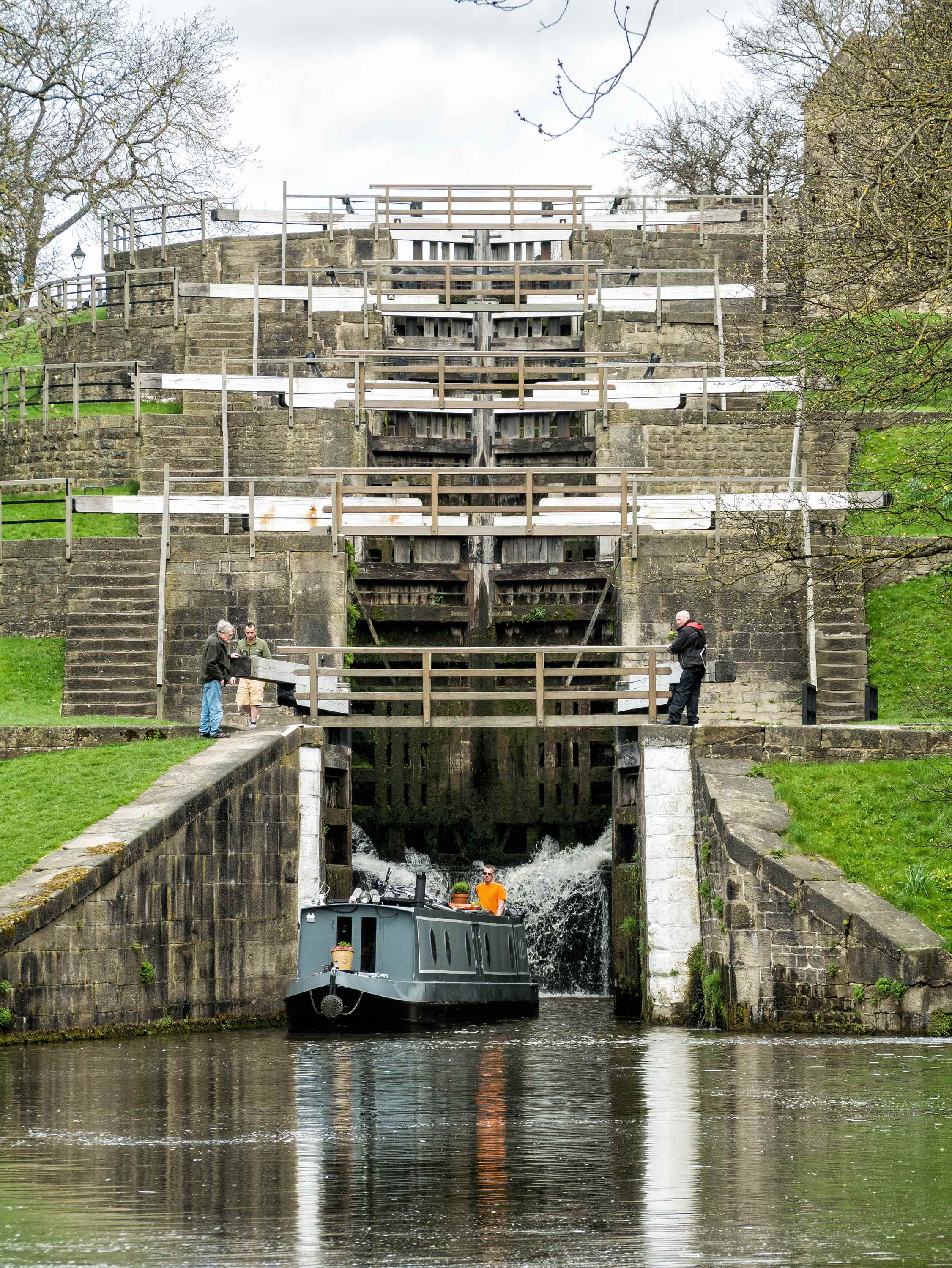 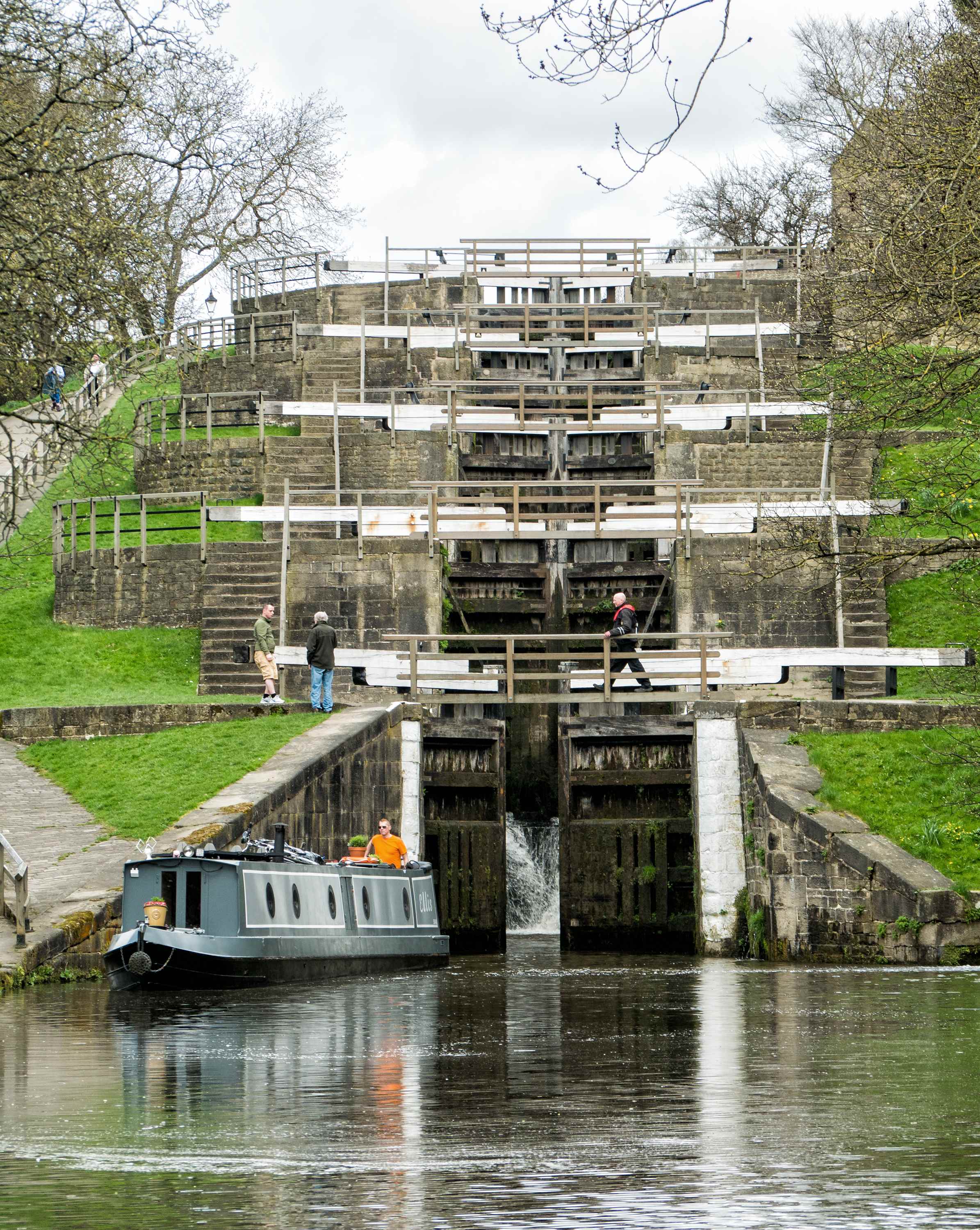 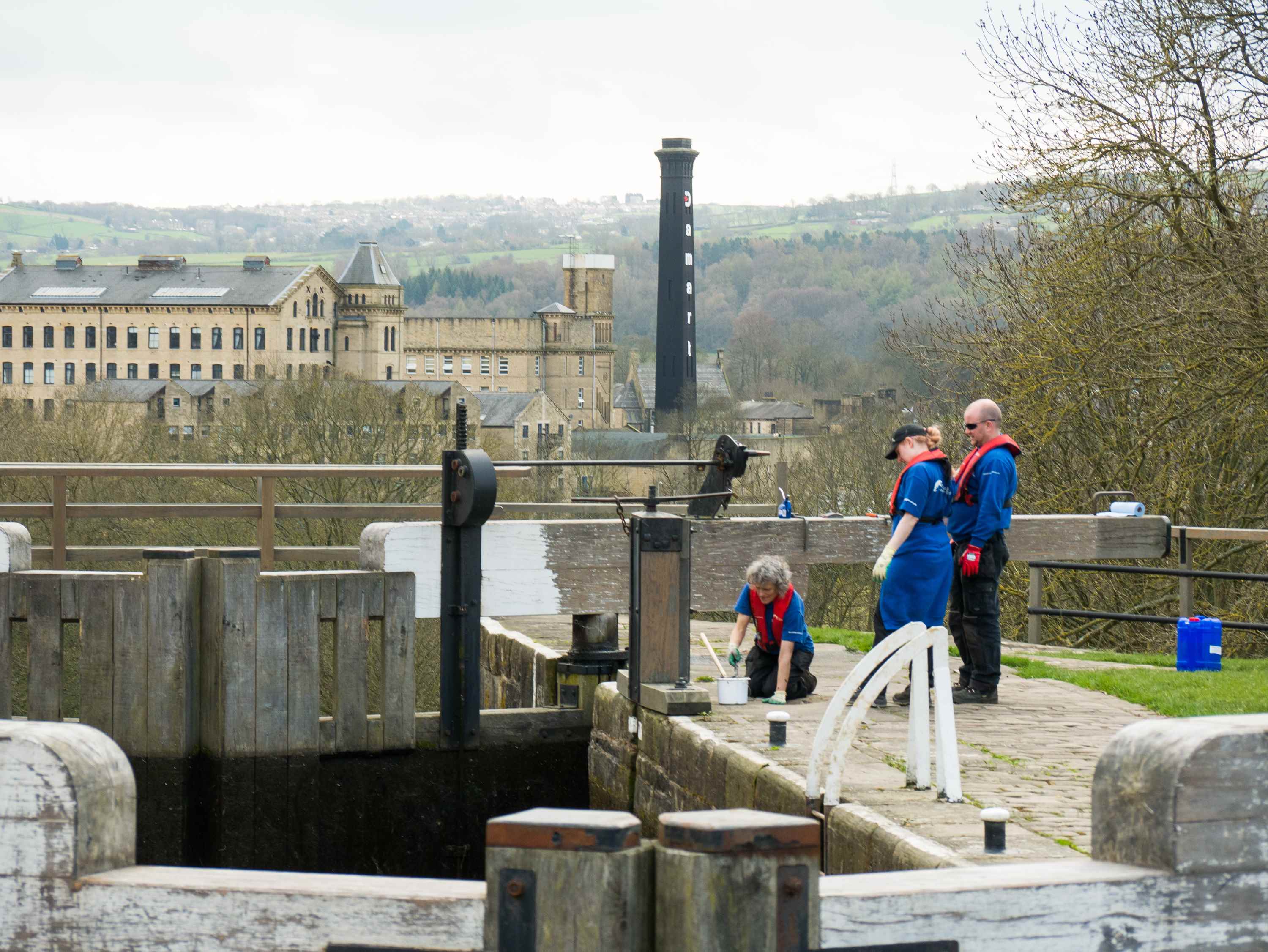 All scraped now and ready for a fresh coat of paint

After a night at the top of The Bingley Five Rise locks, we moved along a little further for some open countryside and chilled for a couple of nights. Barry had been hoping this beautiful boat had descended the Five Rise while we were there, but sadly we were a few miles away by the time it passed us. 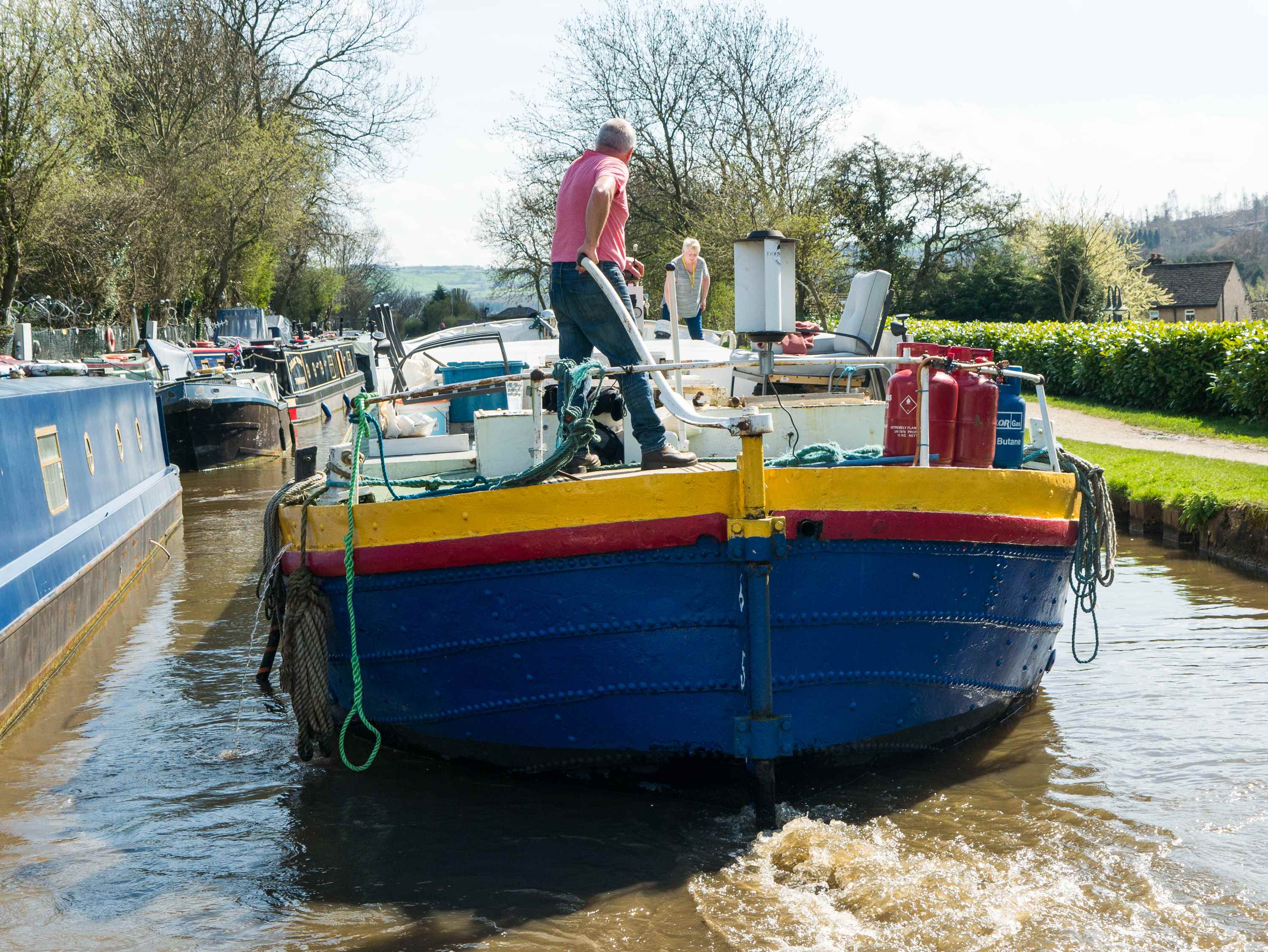 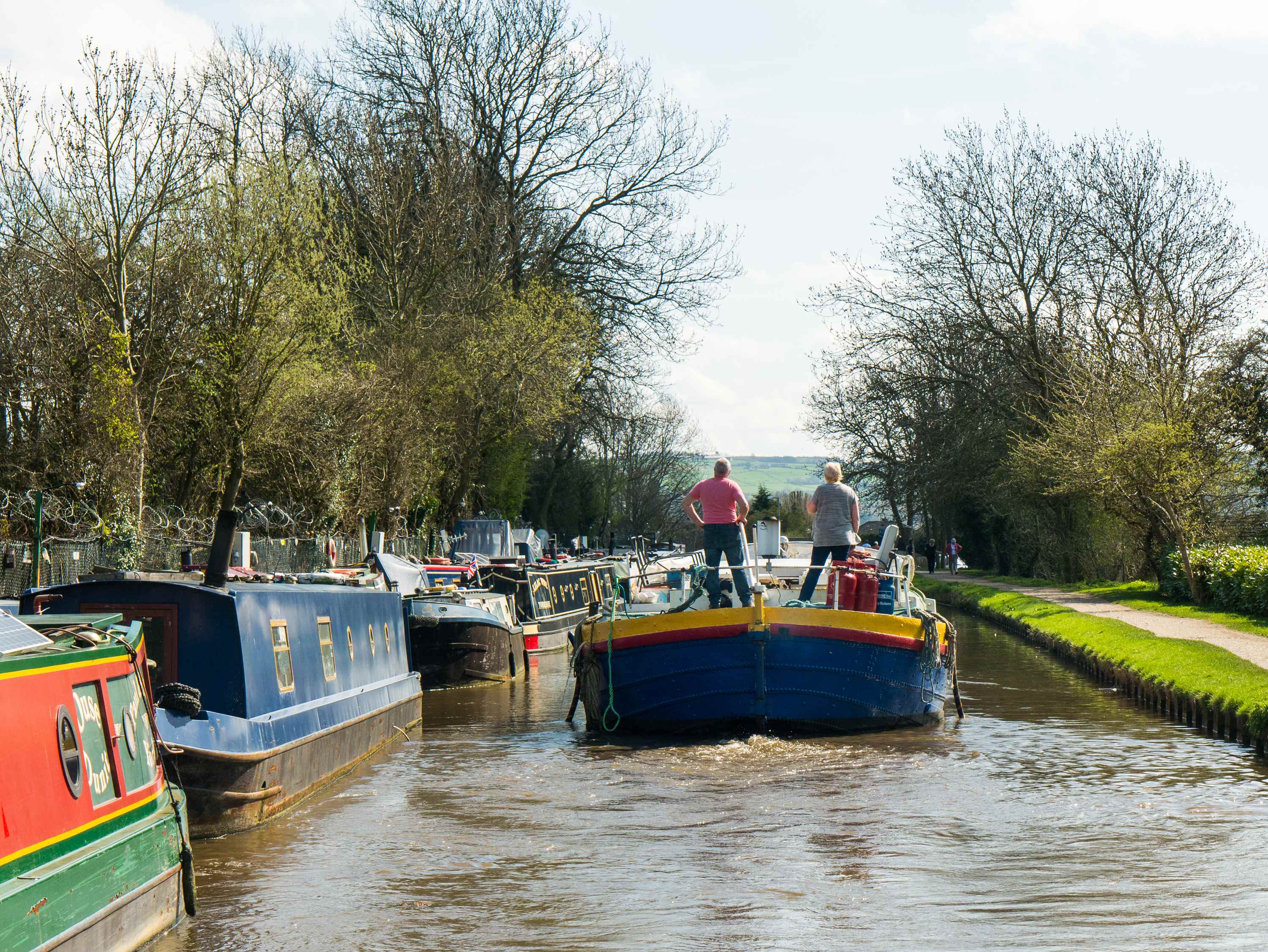 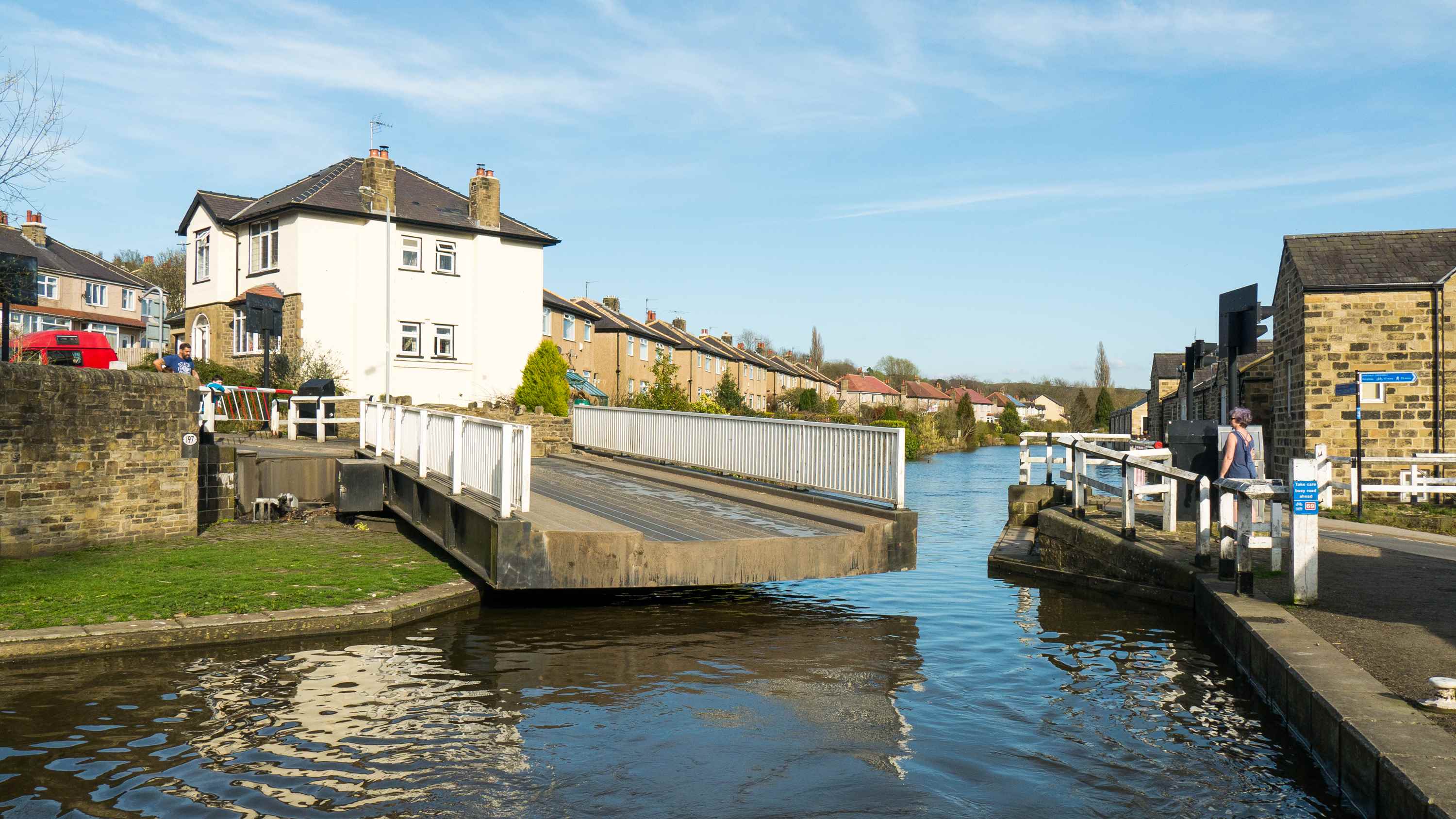 More swing bridges – and look at those blue skies now! 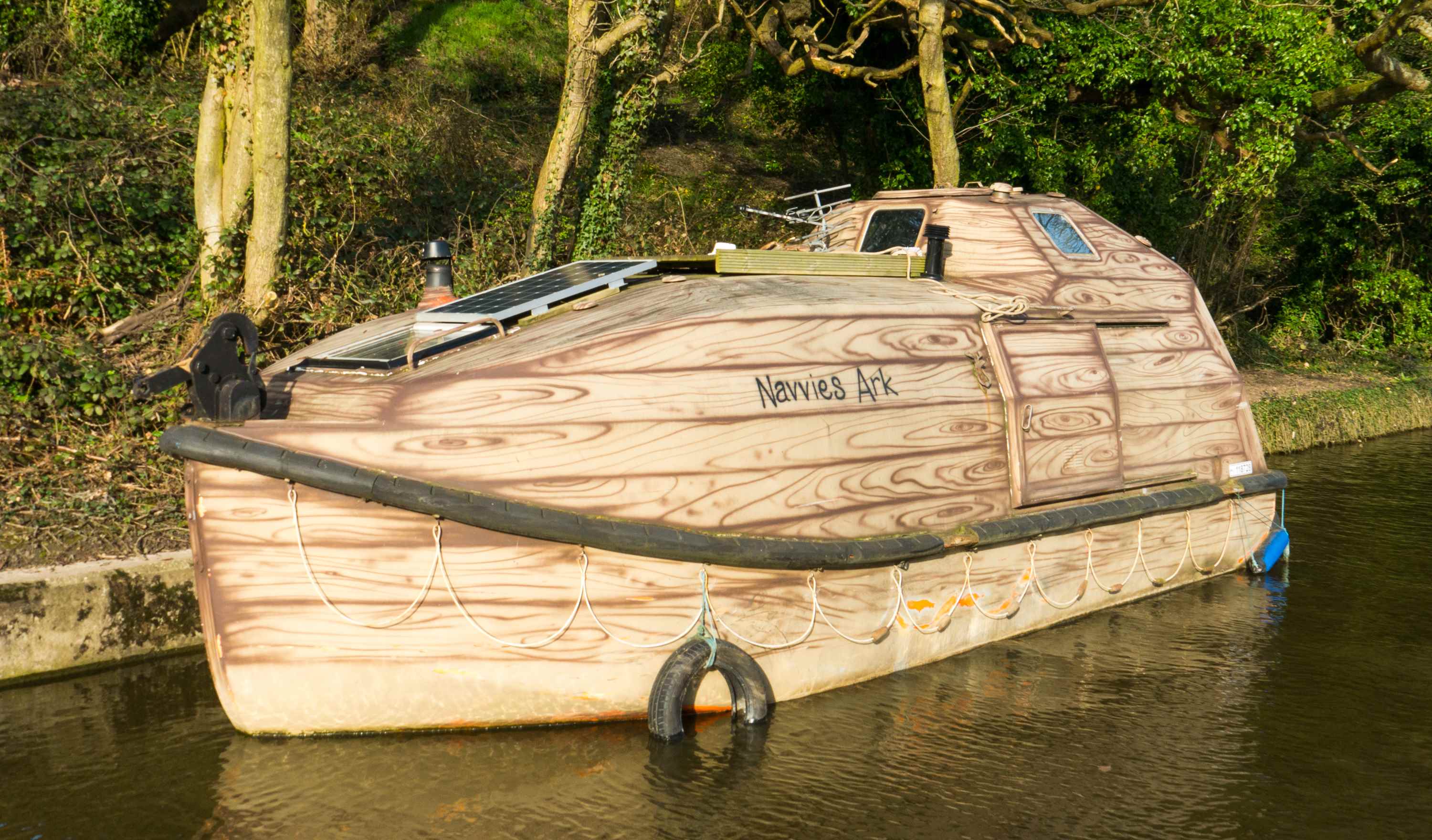 Love this ex-Lifeboat camouflaged as a wooden ‘Ark’!

Shortly after stopping I recognised the sounds of Curlews calling – I have no idea how I knew, I can’t recall ever hearing the sound before, let alone recognising it, but I certainly shall from hereon in. If you’ve not heard it, click here and listen. It’s mesmerising and unmistakable.

Lambs were gayly frolicking all around seemingly without a care in the world, unaware of their likely fate in the near future. People always appear happier as soon as the sun shines, as it lights up our energy fields and gives us optimism that we’ll have more chance to be outside soaking in the rays and Vitamin D shots. 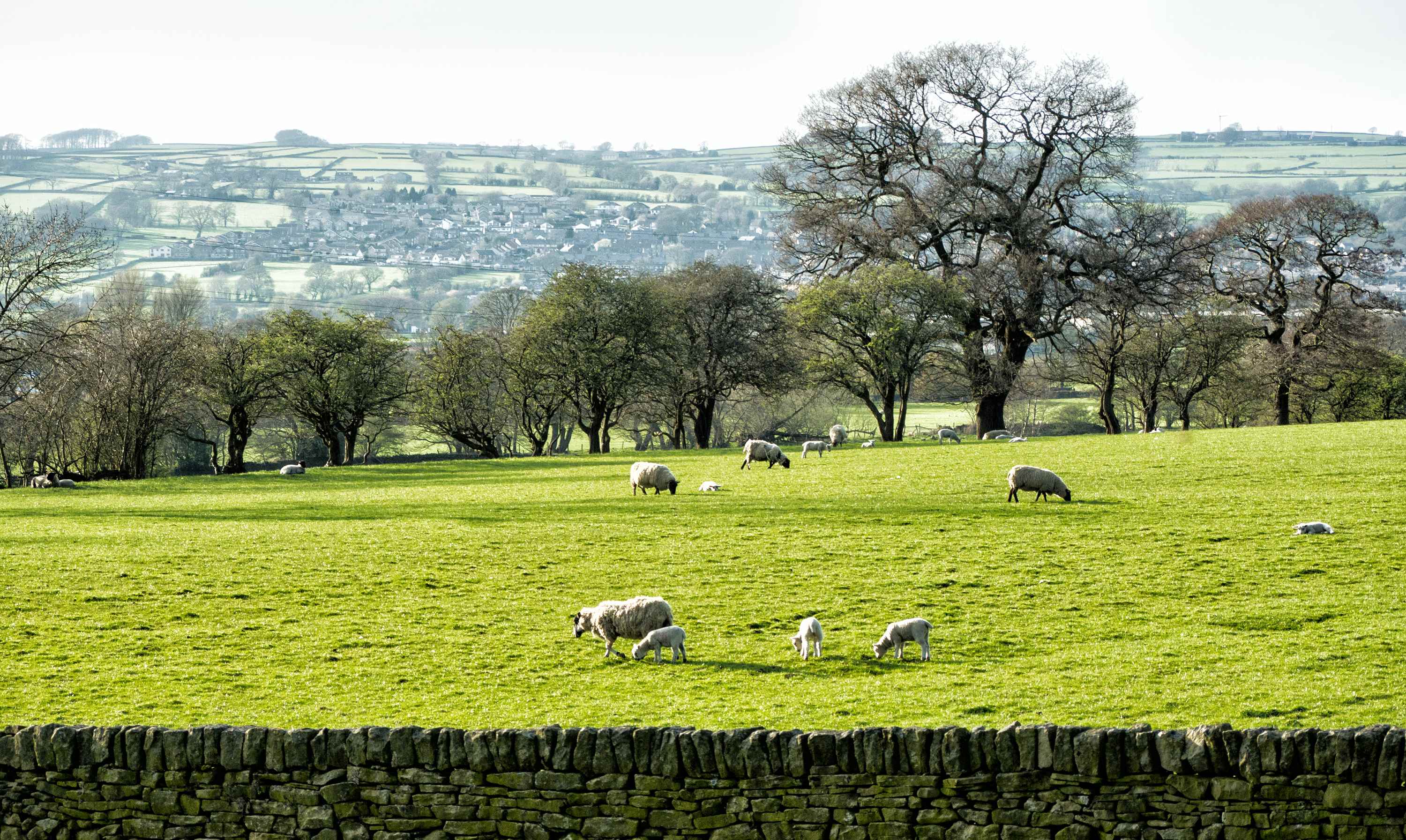 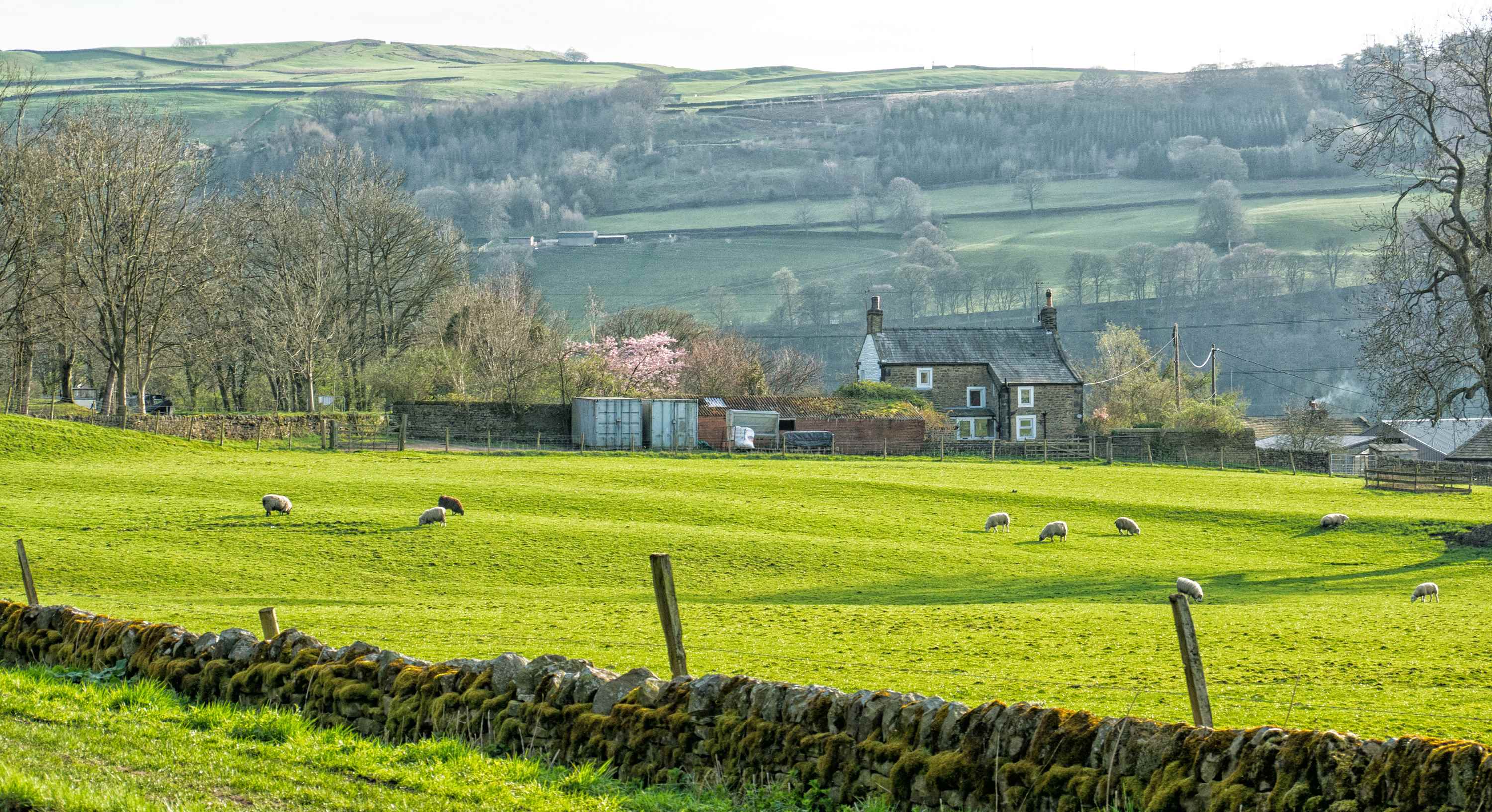 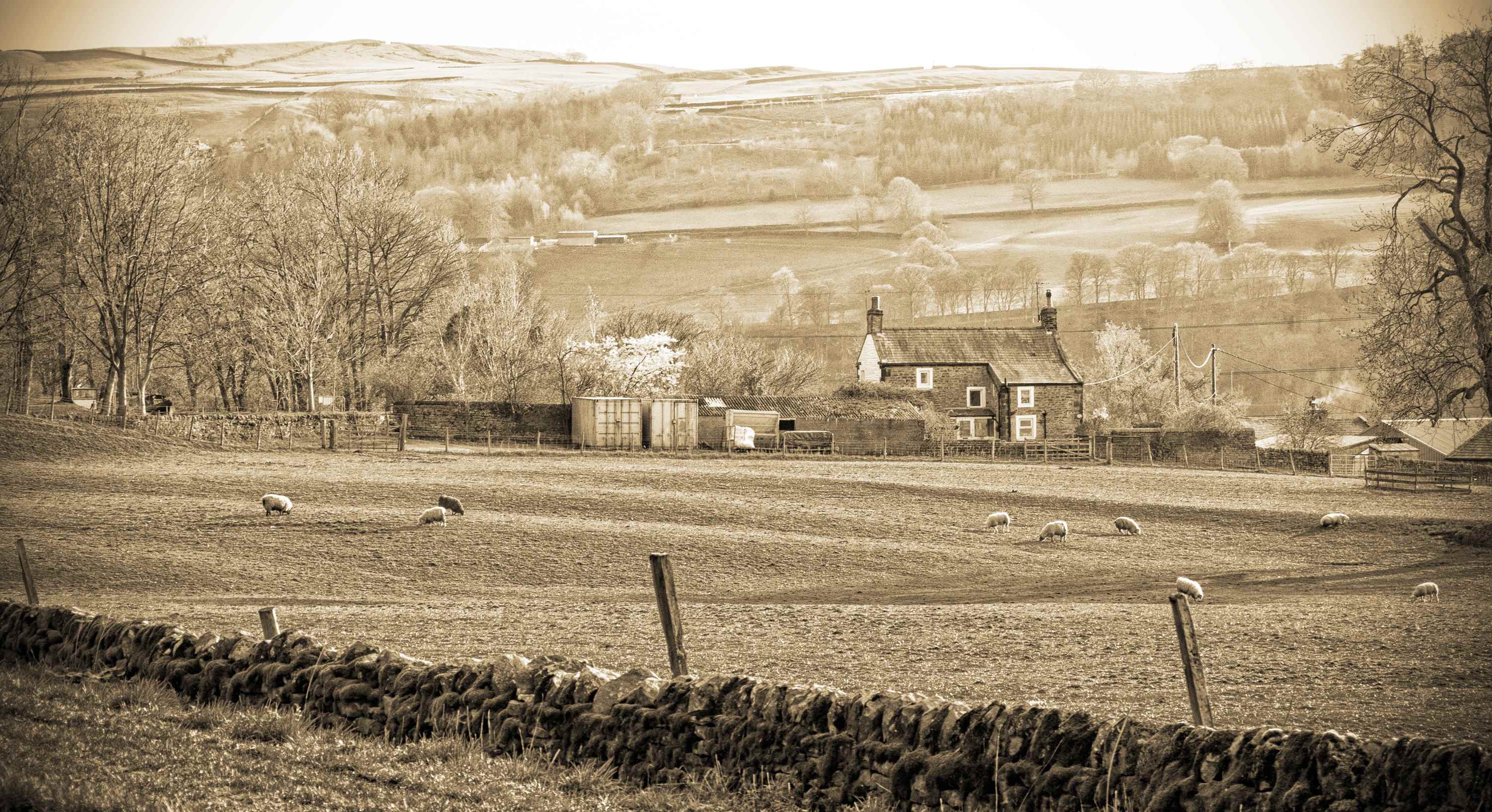 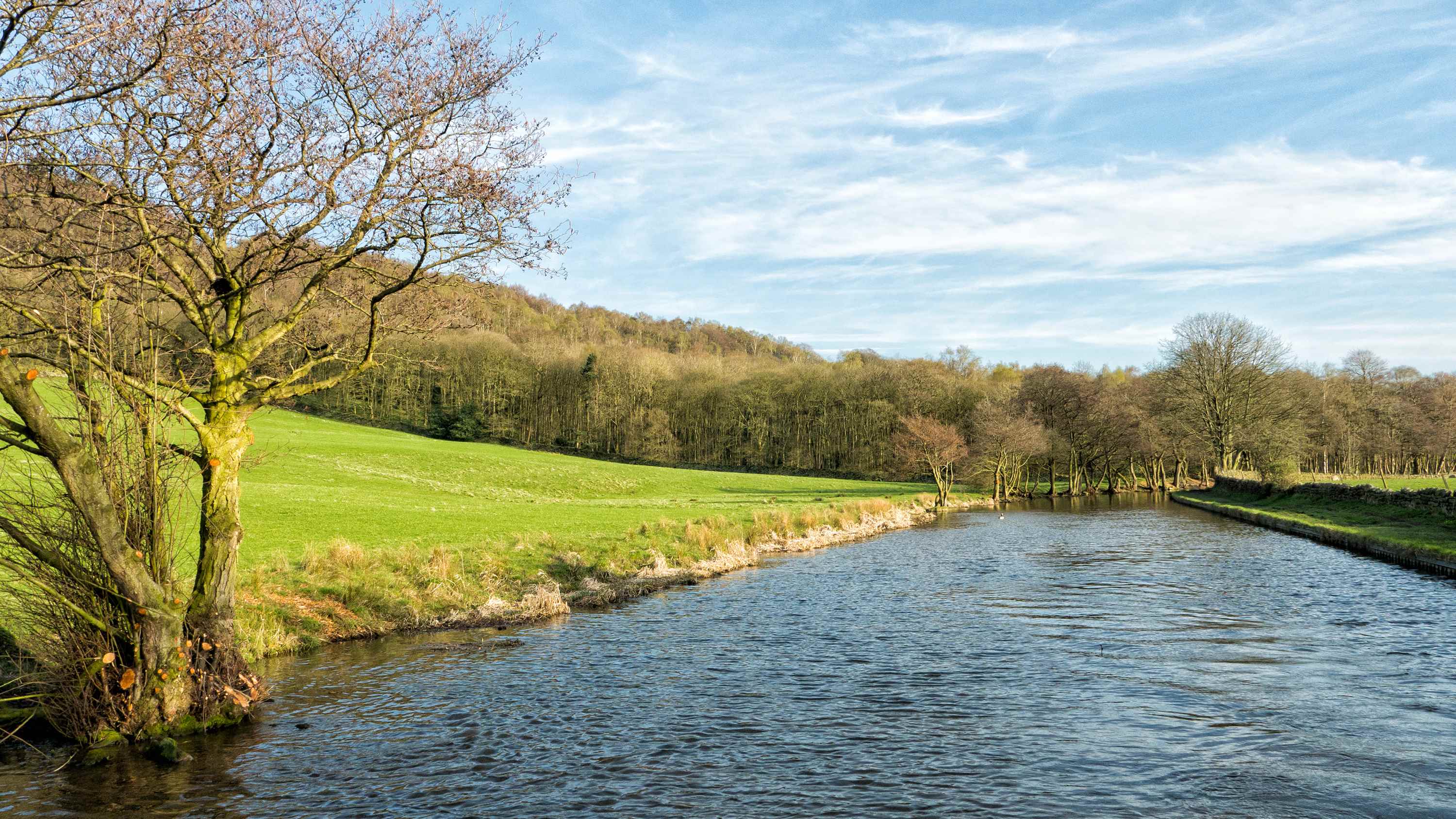 It took us a while to find somewhere suitable to moor, the sides of the canal tend to be extremely shallow or have ledges on that won’t allow narrowboats in 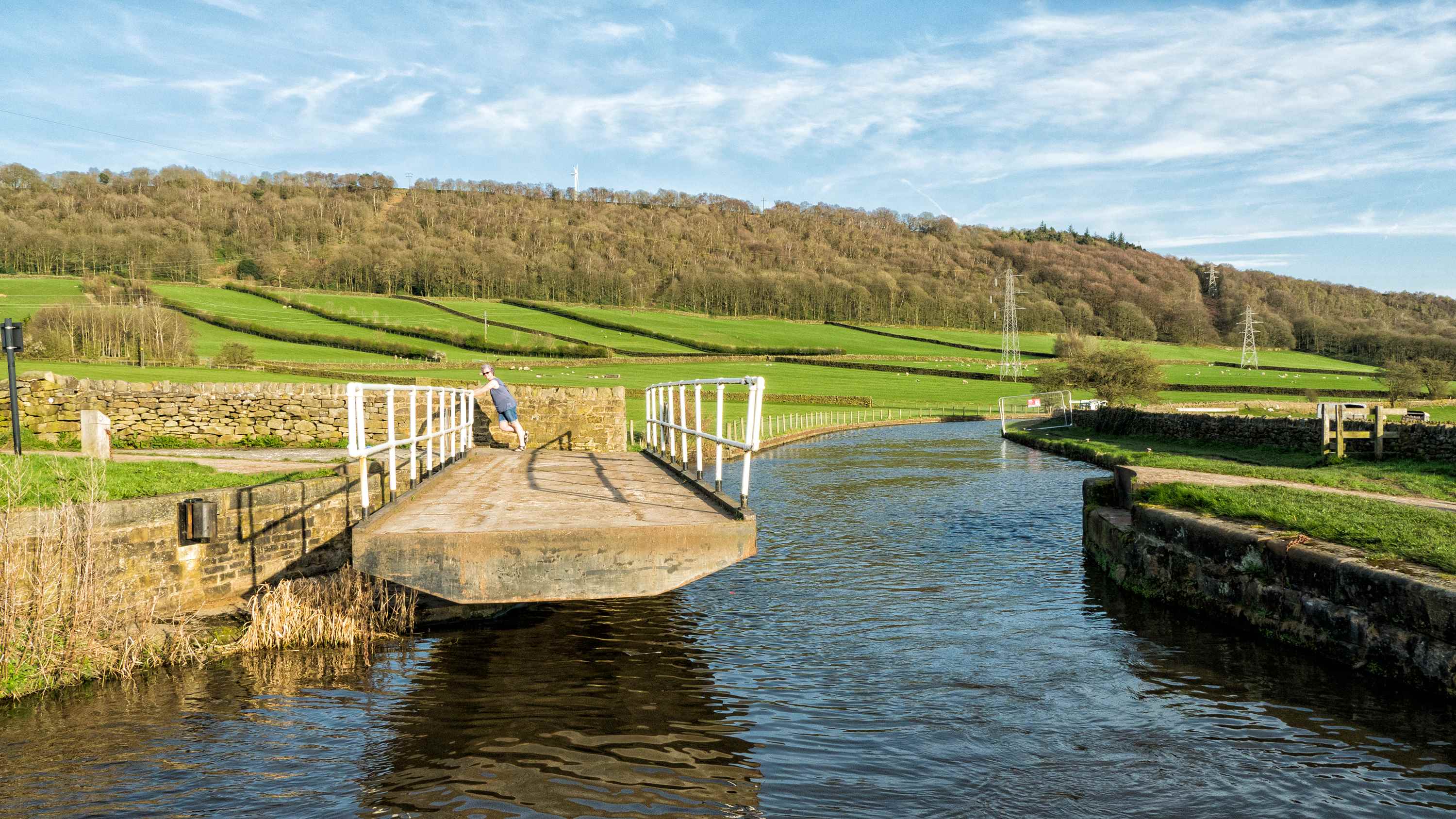 Splendid scenery – if only there were no roads so nearby

We wished we’d allowed even more time to cruise and chill along this route – and every time we moved on we became more determined to return again!

11 thoughts on “Saltaire to Farnhill, via the Bingley Staircase Locks, and signs of spring at last!”