We’re starting to get the hang of the frequent swing bridges now, as we head further west along the waterway. We’d planned on our next night’s mooring being at Rodley, and wanted to catch up with friends who lived nearby. It turned into a two-night stay so I could do some more work on board, and it suited Steph and Pete better to meet on the Thursday. After a bit of research, Barry found a nearby establishment with excellent reviews, ‘The Owl’, and we met there. Steph and I went to the same Senior school in Sutton Coldfield, in the 1970s, John Willmott (Grammar then) School. She stayed on in the sixth form, and became a teacher. I’d left after the fifth form and trained as a nurse in Kidderminster. We re-connected in 2009, when they visited us on board Northern Pride (when we DID get a mooring at Clarence Docks!), and we’ve had a few other meet-ups at various occasions since then. 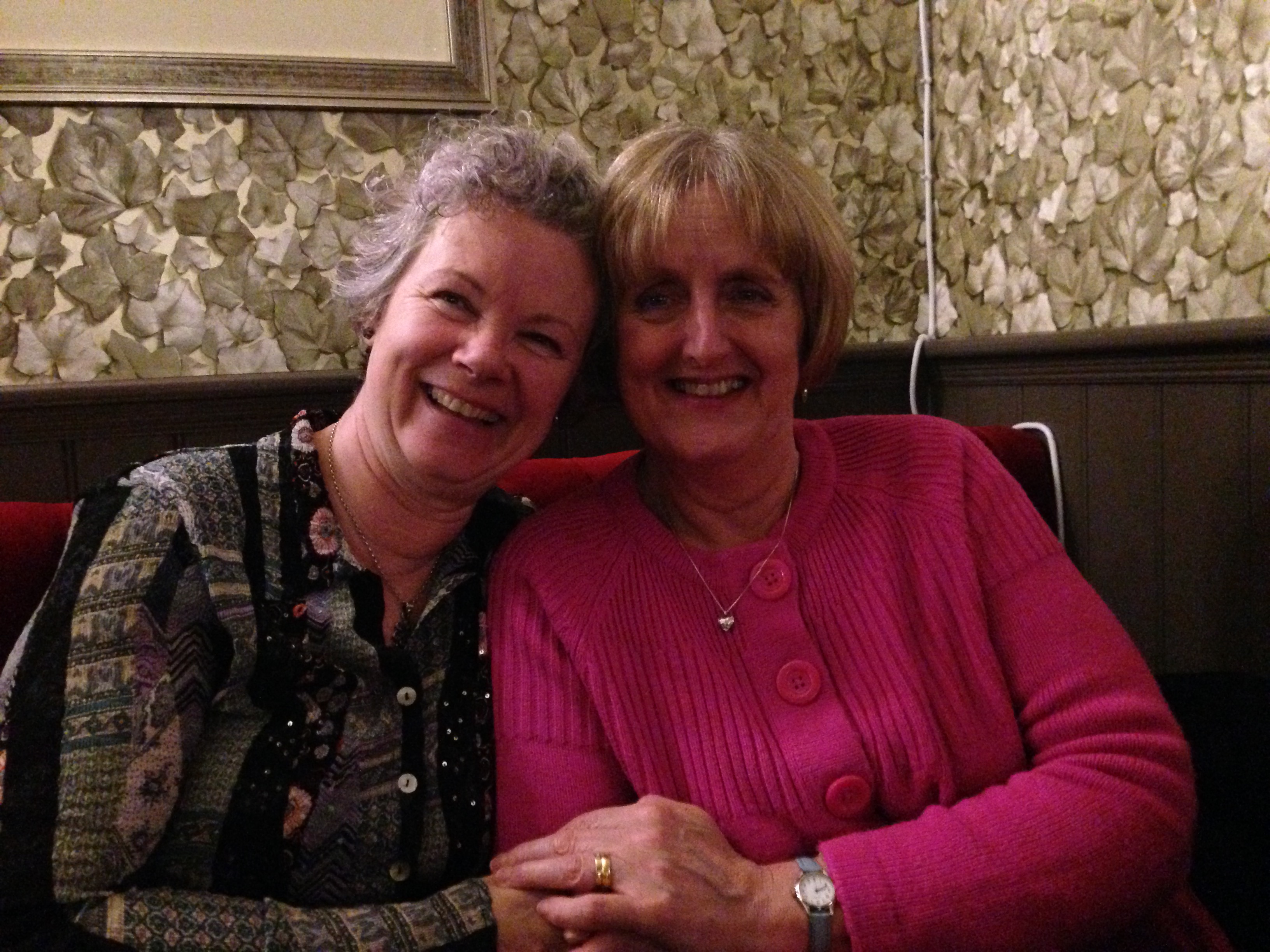 Sandra and Steph at The Owl in Rodley

The pub was extremely welcoming, a great menu and delicious food. Sadly Steph and Pete couldn’t stay for the quiz night that followed at 2130hrs (we keep reminding ourselves we do often synchronise with events!), as they had a long drive the following day. Barry and I stayed, had a few games of dominos while we were waiting (it’d be rude not to as they were on the shelf next to our table), then had a go at another new type of quiz (failing miserably as usual). On this one you each get a sheet, with numbers randomly allocated from 1 to 25. It’s got a carbon copy you tear off once you’ve written all (or as many as you can!) and give in to the compere. He then reads out the answers, and you tick them off. The first person to get a line, in any direction, or four corners, shouts out. The answers are checked for correctness, and a small monetary prize handed over. Brilliant!

Following that we took part in a game of ‘Play Your Cards right’, which was also rather dissimilar to our previous game at Tattenhall Marina where I won £49 in 2013. This time you bought a £1 raffle ticket (or £5’s worth we discovered once the game was in motion gave you a far better chance of inclusion!), and if your number was called out you got a turn. This game was worth winning, as the prize money was £80 if you got to the end. One woman almost did.

Our next mooring was in an idyllic setting alongside Dawson Wood, not far from Apperley Bridge. 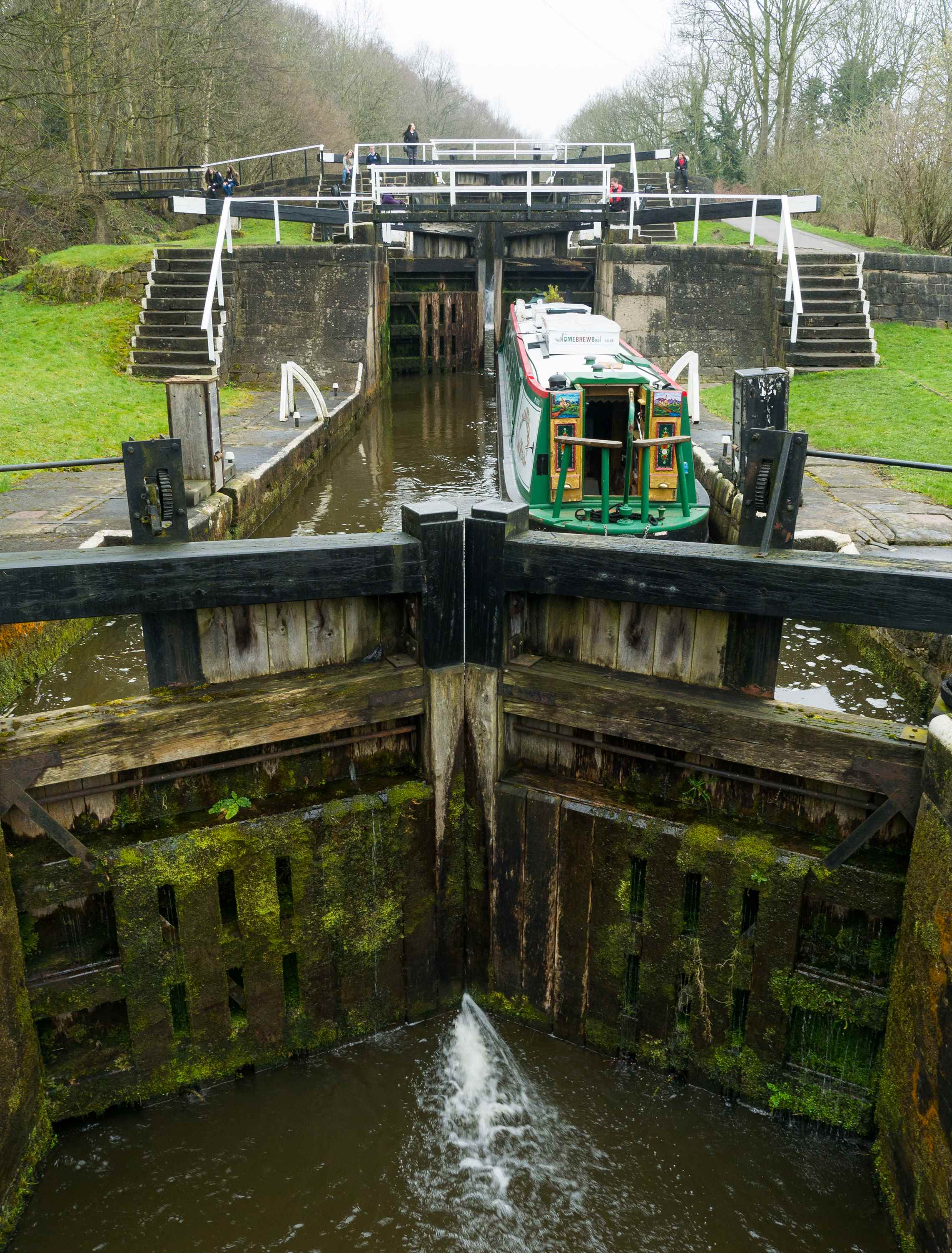 ‘Forge 3 Locks’, the first of the triple staircase locks complete with a lock keeper 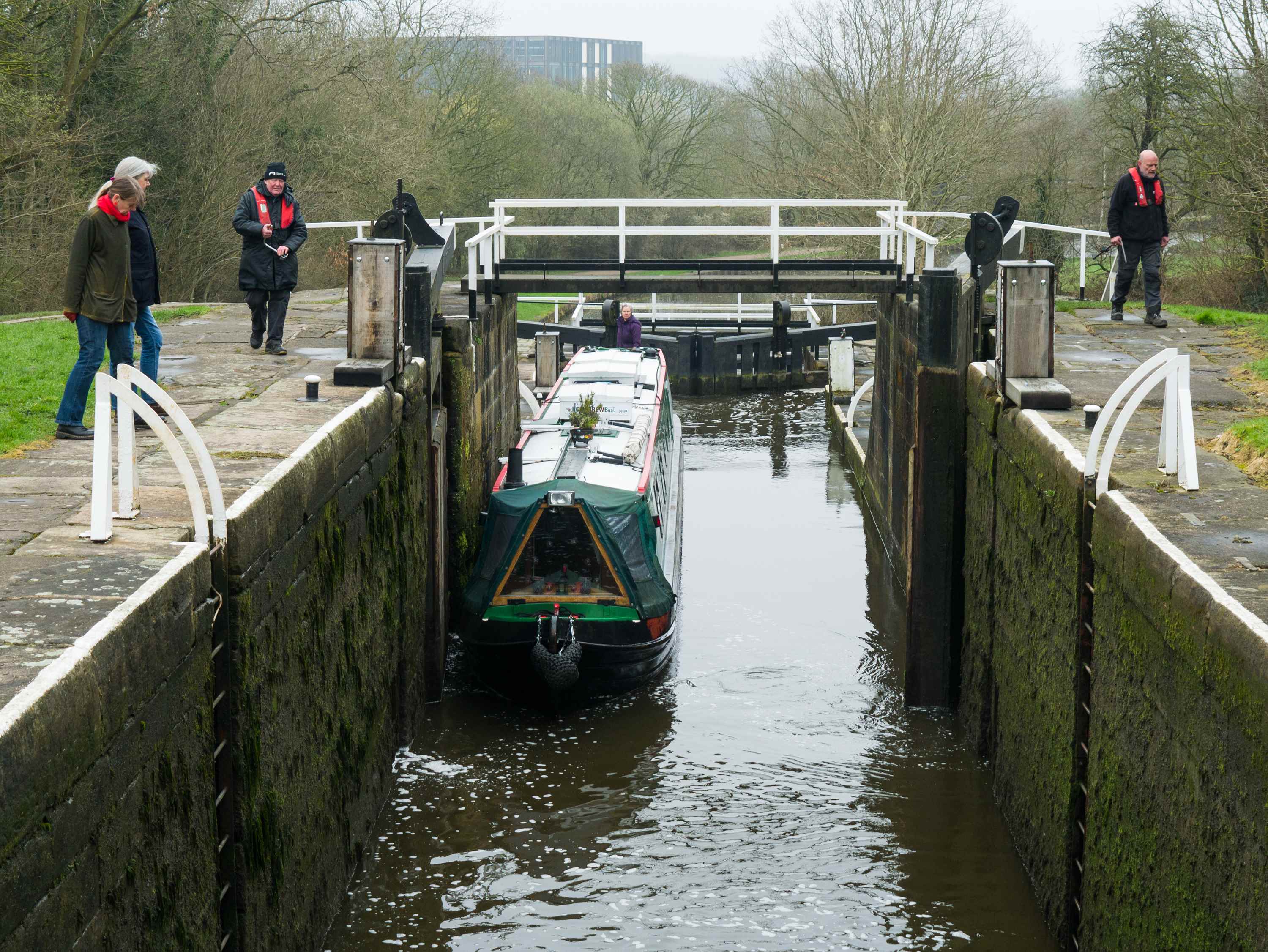 ‘Newlay 3 Locks’ was next with two lock keepers 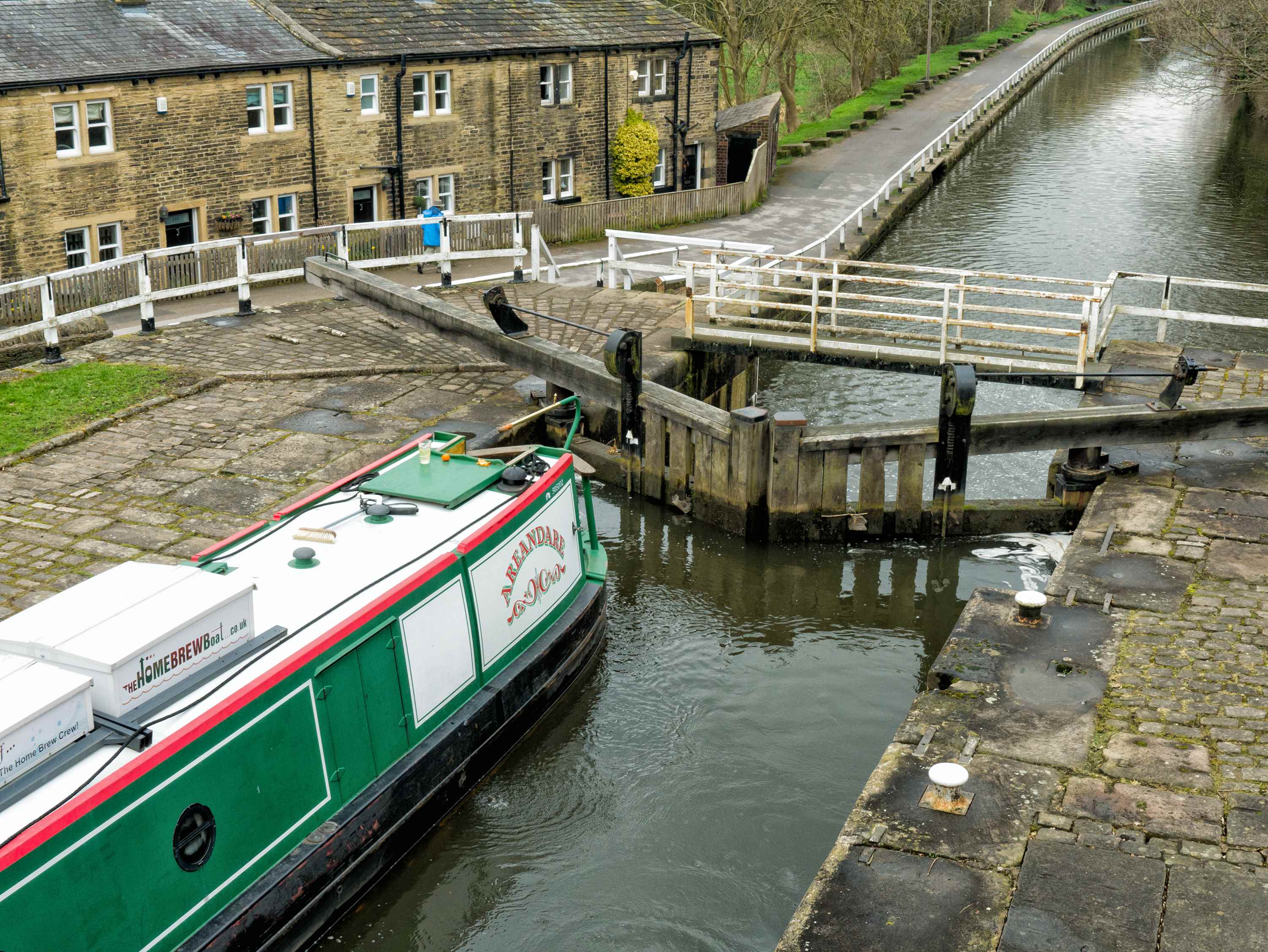 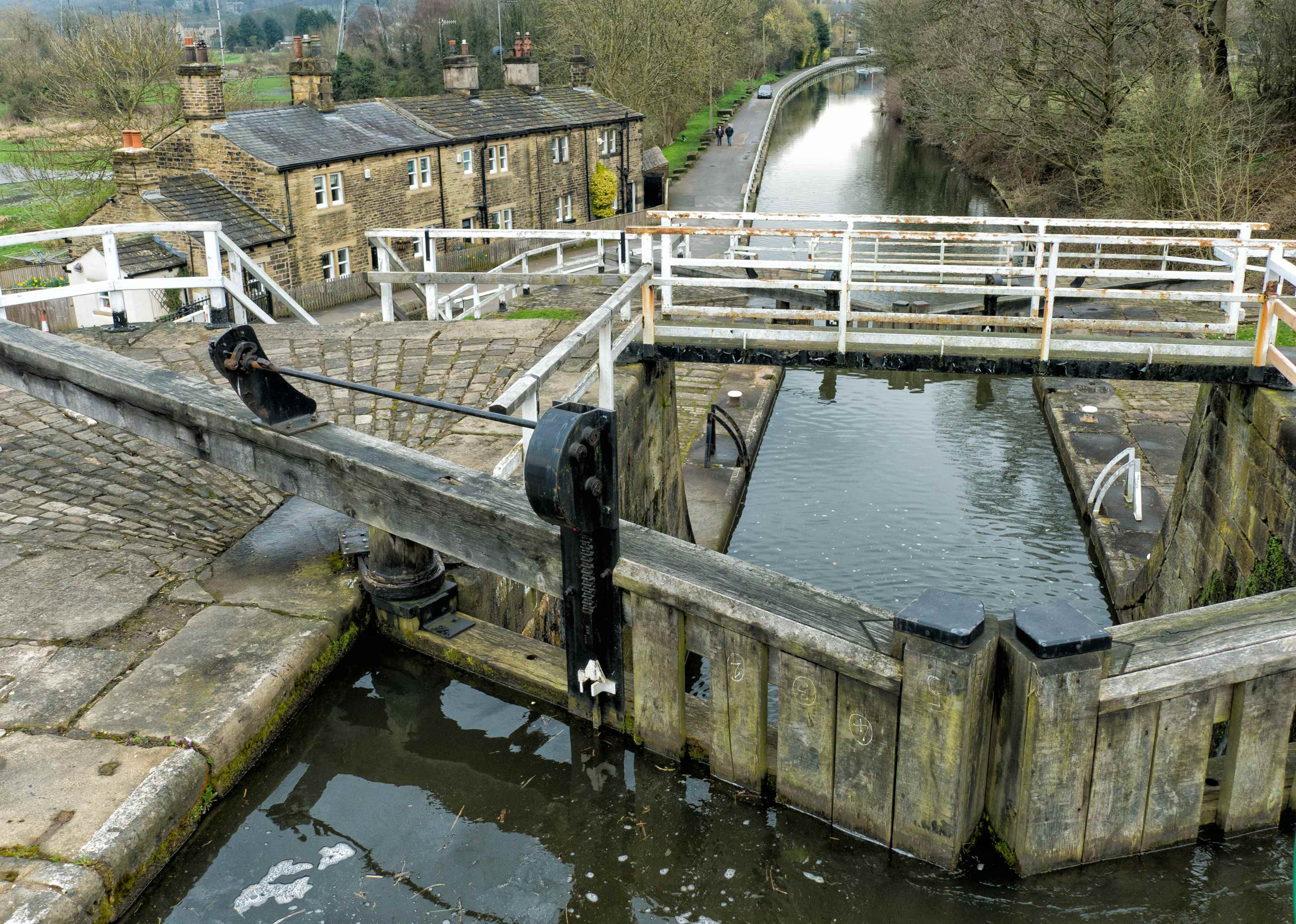 Very photogenic with the row of cottages

We took a day’s ‘rest’ at Dawson Wood, caught up on a myriad of things, and spent a rather pleasant couple of hours wandering in the woodland opposite.

There’s a preponderance of staircase locks along this length, which always stretch the imagination to make sure you get it right, for safety’s sake and to conserve water. I shan’t mention the occasional times we failed miserably in our early years, or been foiled due to the previous incumbents (see this post from 2009 for what happened at the Dobson Locks that time), but not recently thank goodness. 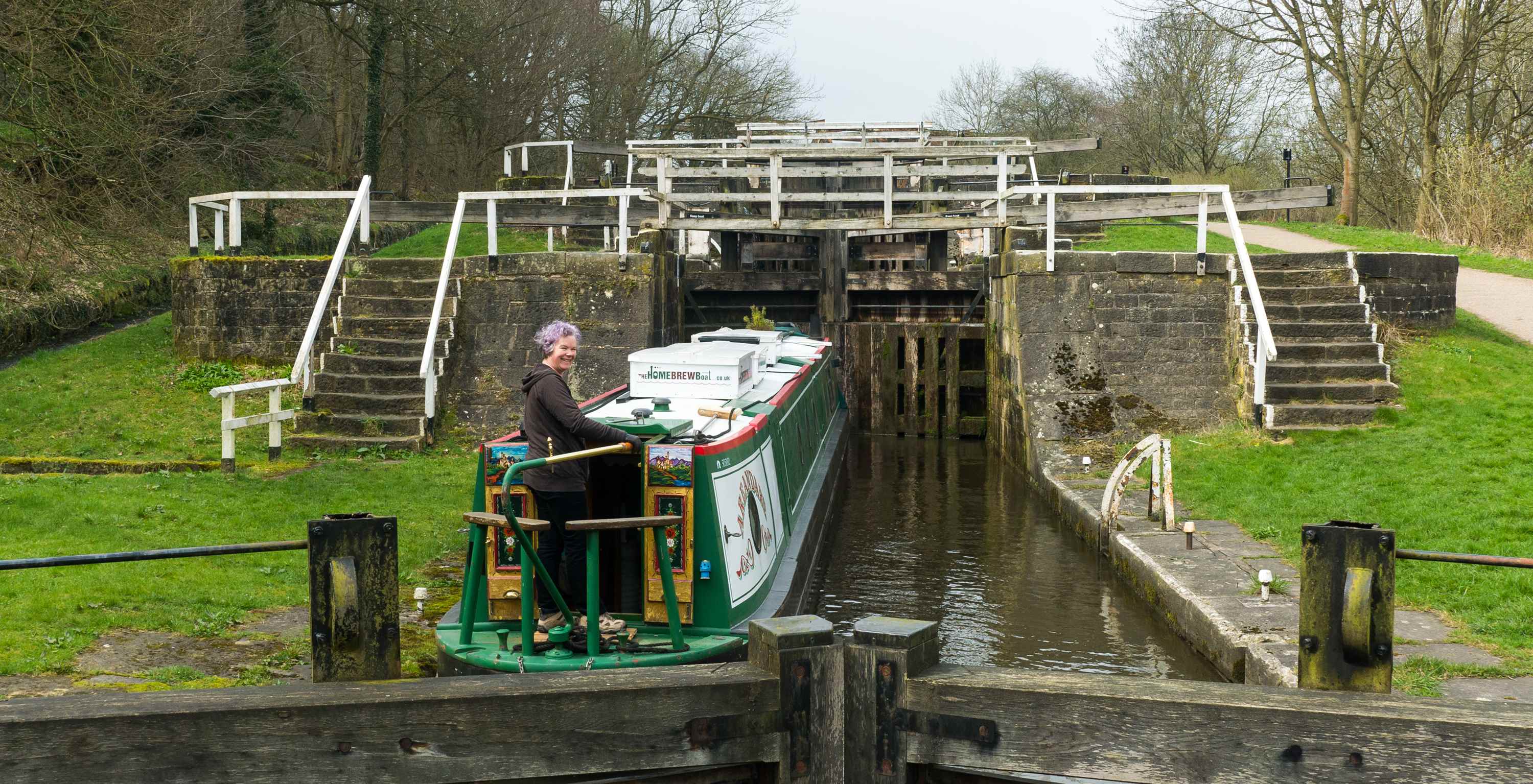 The three locks takes the canal up 25′, so makes for an efficient flight 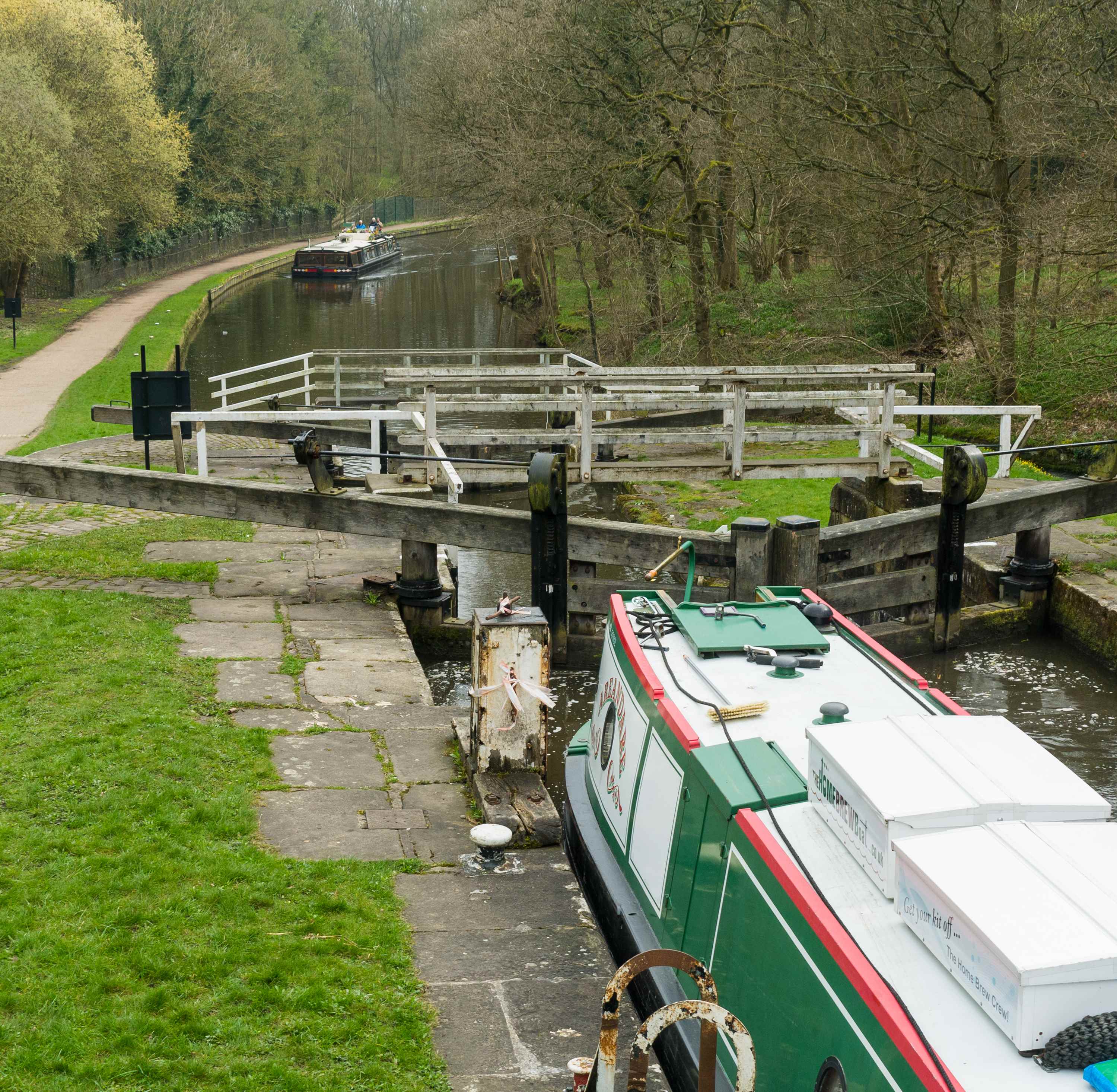 Approaching the locks you’ll see a wide-beam boat. There’s an abundance of wide beams on this waterway, mostly hire boats. This one was a Hotel Boat run by a very friendly chap (though I’ve forgotten his name!)

We meandered to Shipley, tying up for the night on a rather random but secure mooring on the offside (room for one narrowboat only, we were fortunate!), tidied up into a black bin-liner all the unsightly rubbish surrounding us that looked like it’d been chucked mindlessly from the bridge above, and called Gav and Helen to scoop us up for another fun-filled night with them.

This time the get-together was planned to be at their home in Guiseley. It must’ve been a brilliant night as neither Barry nor I even considered taking any photos! You’ll just have to believe us. We even played ‘Cards Against Humanity‘, which we’d heard of during our month-long visit to New Zealand last year, but had never previously participated in. It’s said to be a ‘party game for horrible people‘ – it’s certainly unlike any we’ve played before! Laugh? At one point Barry was rolling around the floor clutching his stomach as it was hurting so much and he could barely draw breath. I strongly suspect the copious quantities of rum and coke could’ve contributed to the chortling of Barry and Gav (and maybe Helen and I were rather amused too, though far less inebriated) …

It was another late night/early morning event, with not much of a window for a lie-in, the following day, Monday 16th April, as we’d planned a day out at Saltaire. In 2009 we’d had to cruise past here without stopping, and had been eagerly anticipating discovering more about this fascinating place. Synchronicity played a hand again there, in a most amusing way as you’ll discover in the next post …