After seeing me safely off at Doncaster station on Wednesday 28th March, Barry found himself with a bit of time to kill waiting for Fred to join him for his long anticipated journey to Goole. He’d not been able to get there via the tidal Trent, but achieved it the long way round!

It’s great for me to see the images below, and get to see what they saw that I missed! Barry even writes about their travels … 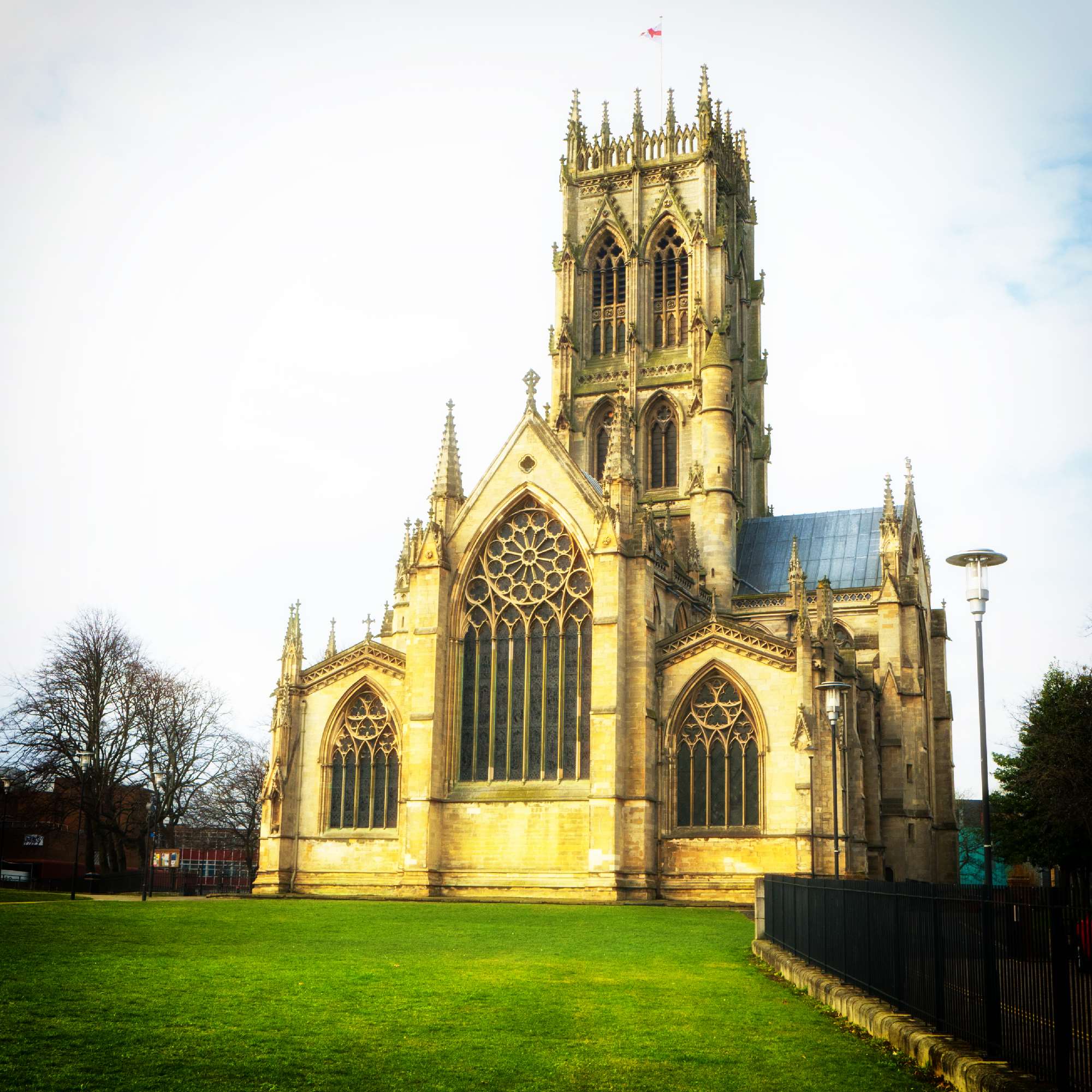 The Minster Church of St George at Doncaster 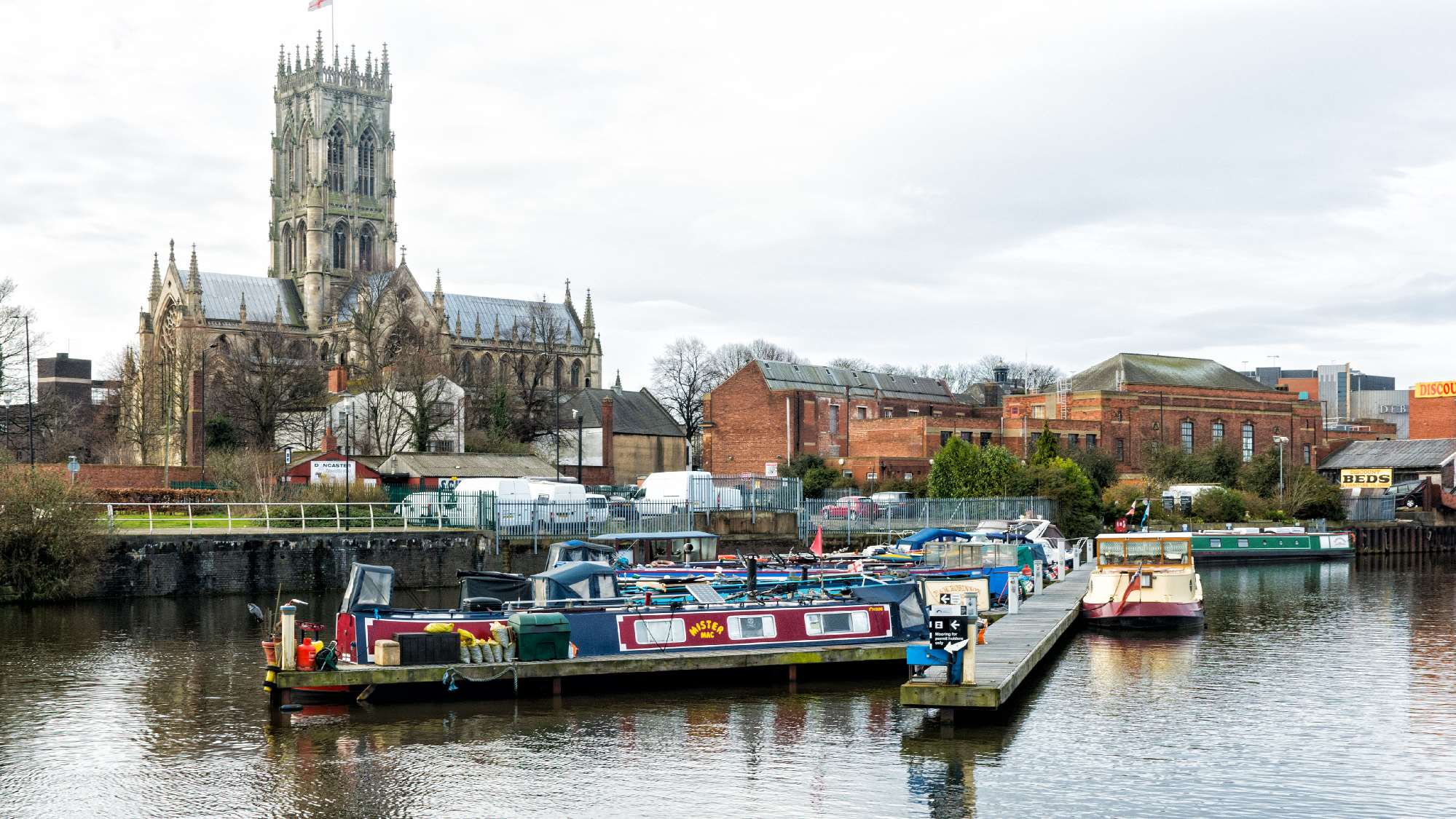 The small community of boaters at Doncaster with Areandare squeezed onto the only visitor mooring!

After a little walk around the area, I met Fred at the station and we set off for Goole.

The original plan had been to keep going down the tidal Trent, around onto the River Ouse, and up to Goole, but I was thwarted  for various reasons. I still wanted to visit, so with Sandra off the boat it was a good chance for a detour.

A couple of hold ups along the way with a multitude of canal maintenance works going on. 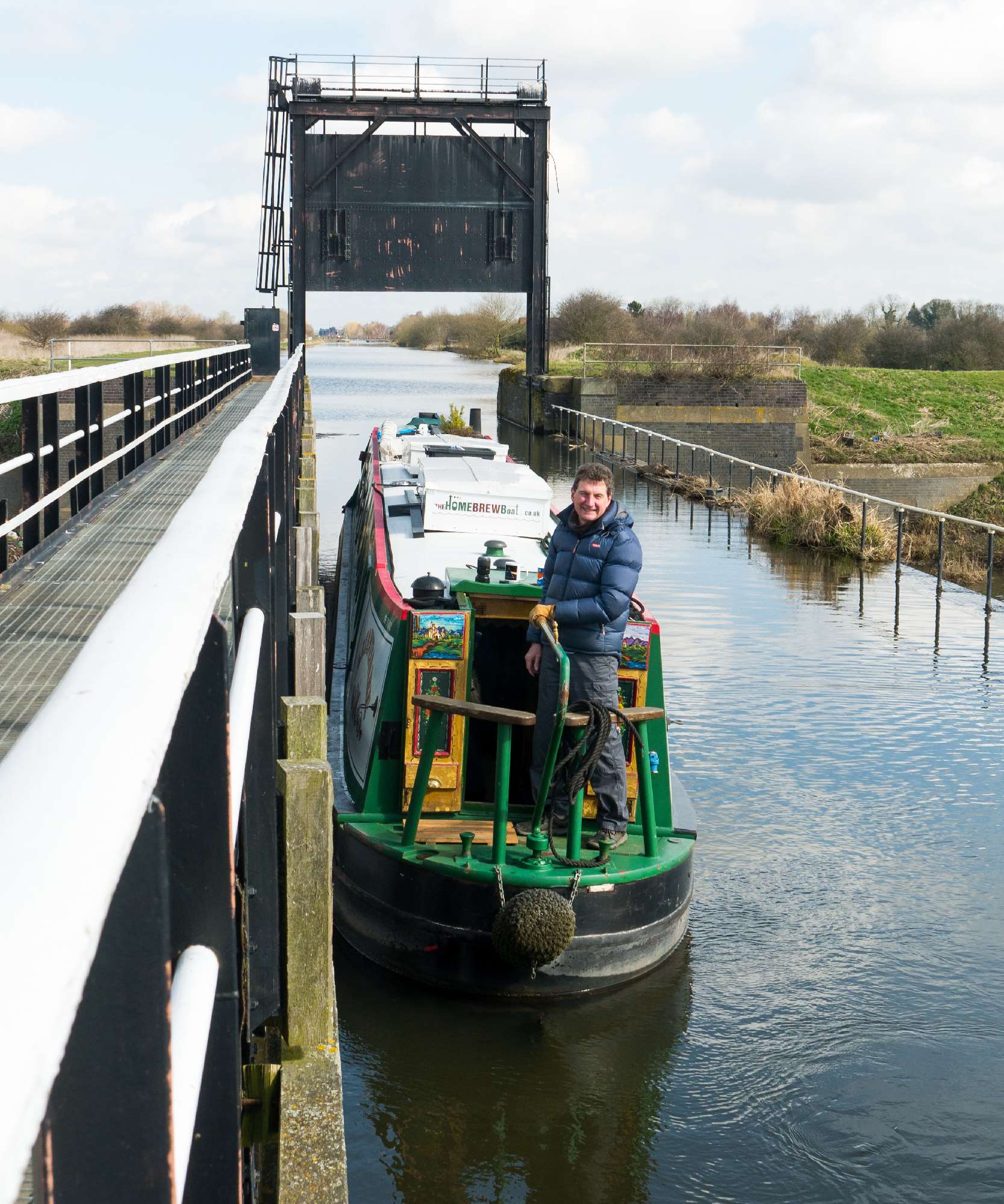 Fred at the Don Aqueduct with its unique guillotine flood gates

When the river comes up it flows over the top of the canal aqueduct, so the guillotine gates are closed to contain the river within the stop banks. 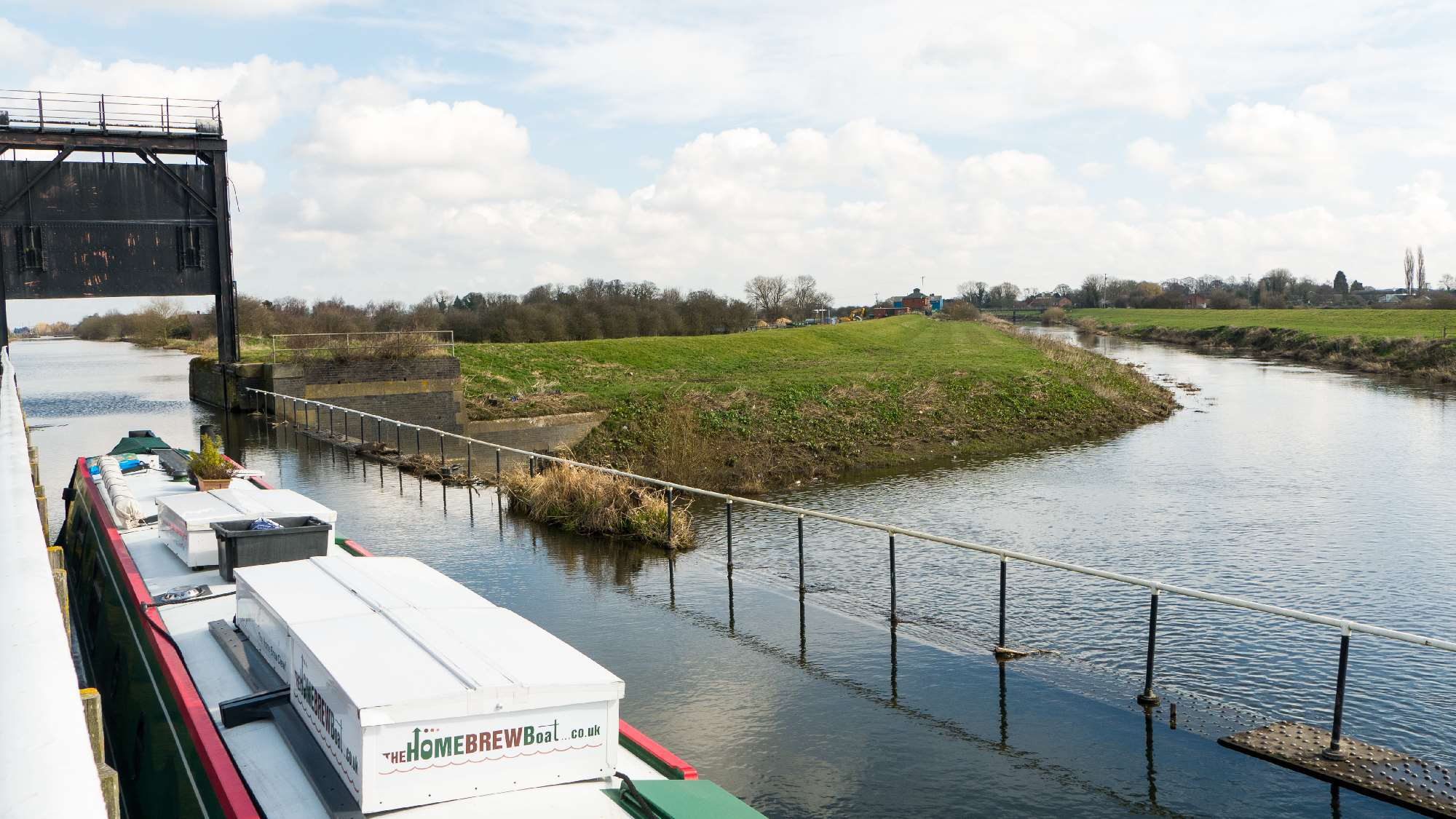 With all the rain we’ve had recently, these guillotines have been up and down more often than during the French Revolution.

The New Junction Canal was the last canal built, and is a straight short-cut of five miles, joining the South Yorkshire Navigation to the Aire and Calder Main Line. 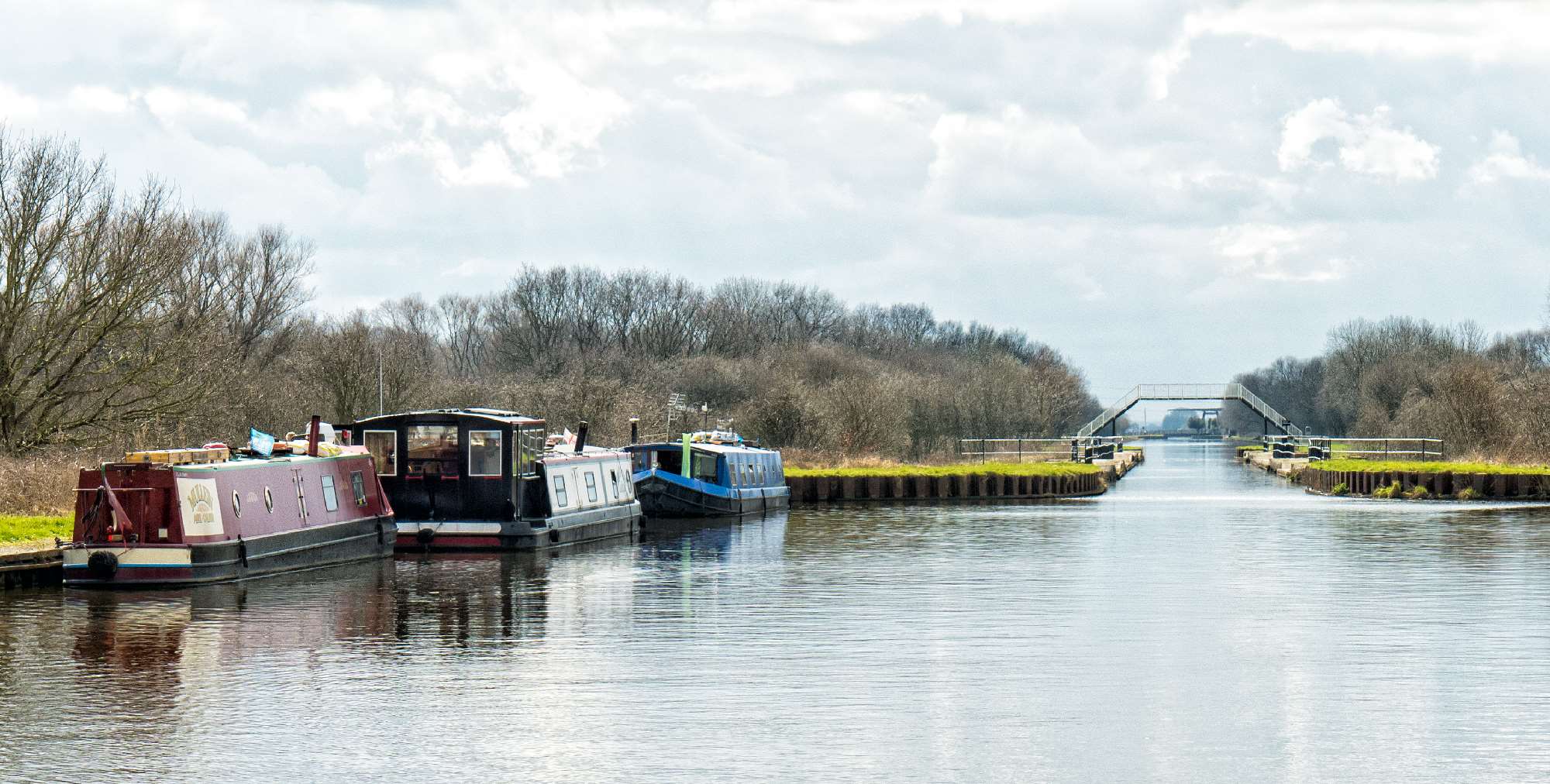 Looking back along the New Junction Canal from the junction with the Aire and Calder Main Line. 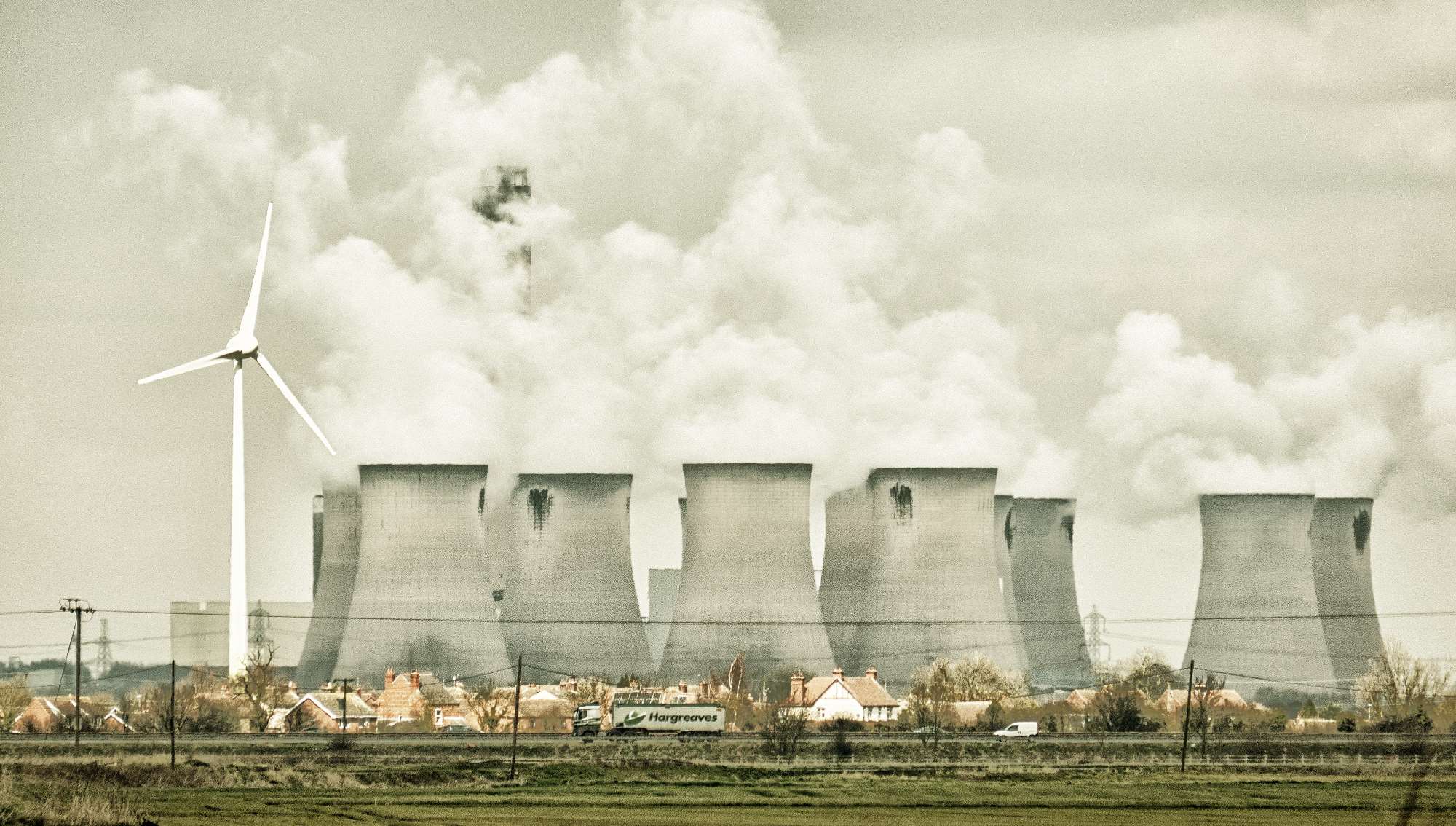 An abundance of cloud-making factories up this way … 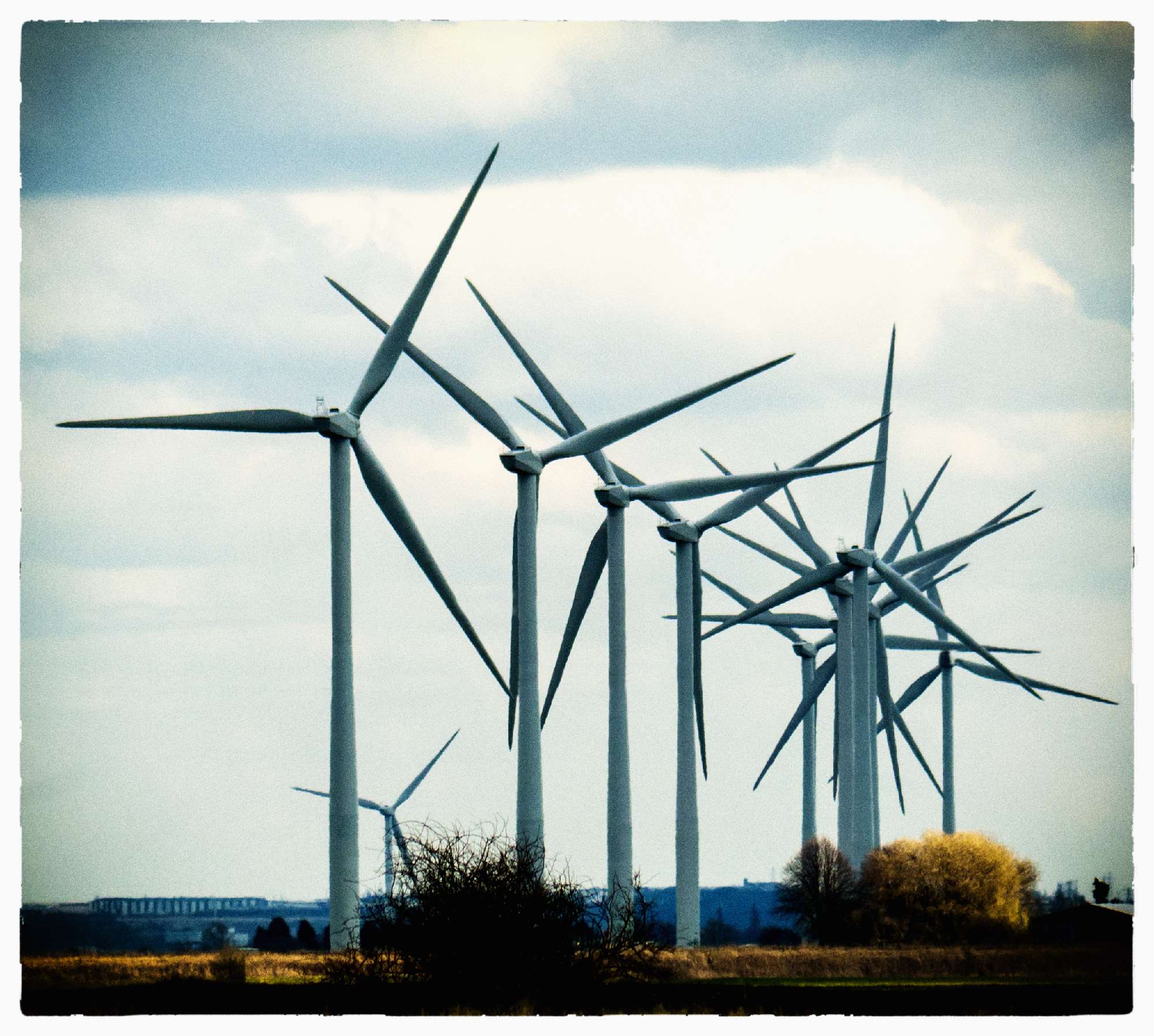 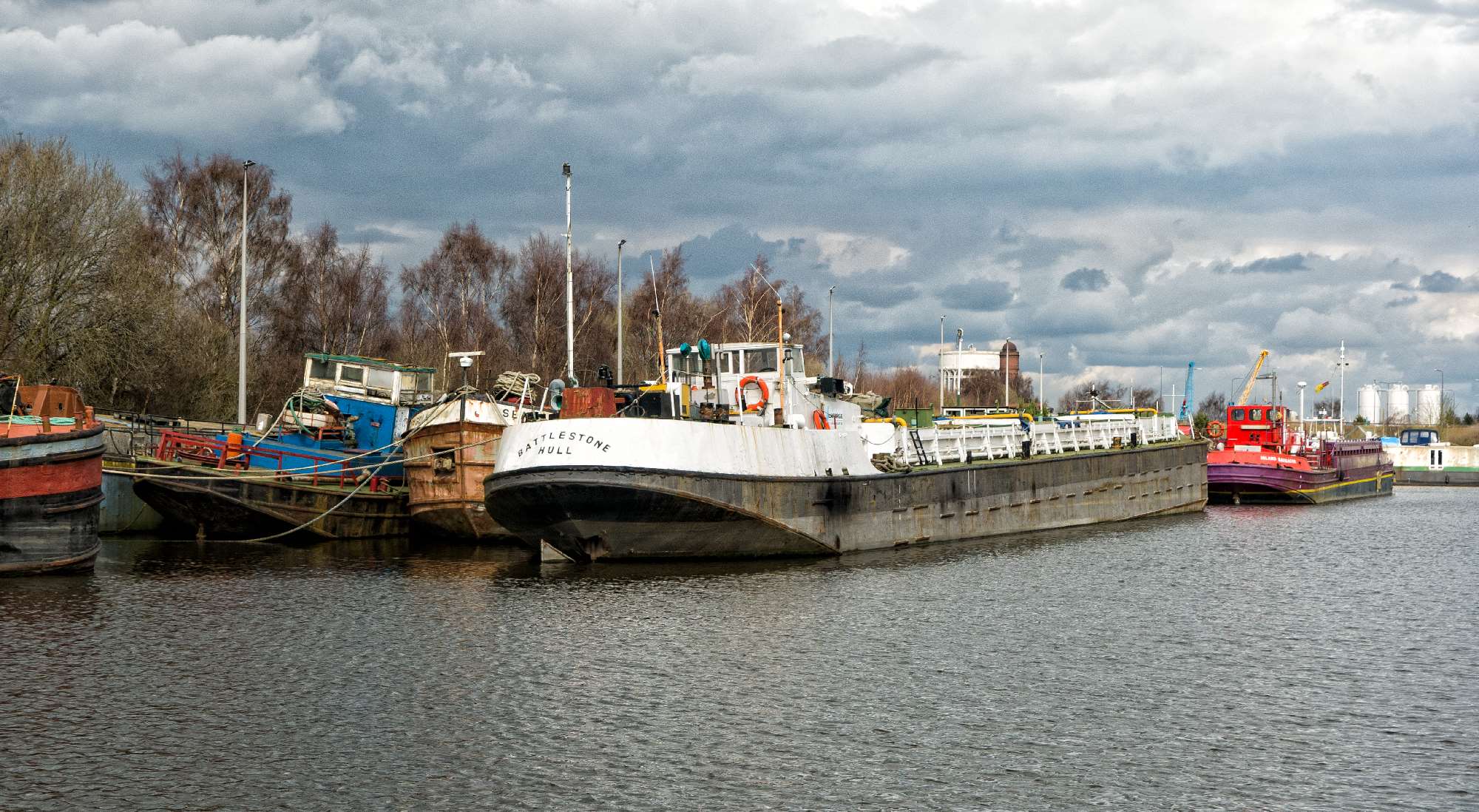 After filling up with diesel, we moored near the Yorkshire Waterways Museum, home to some of the last Tom Pudding coal carrying tubs and its tug boat Wheldale. Best of all admission was free!

Strings of up to 21 coal-carrying-tuBs were towed by the tuG, and when full of coal, the bow attachment was fitted to the leading tub to cut through the water. When empty, it was stored at the bow of the tug, as seen below.

Long trains of these tubs would snake their way from the Yorkshire coalfields to the port of Goole, for trans-shipment to wherever. Now it’s all carried by rail. 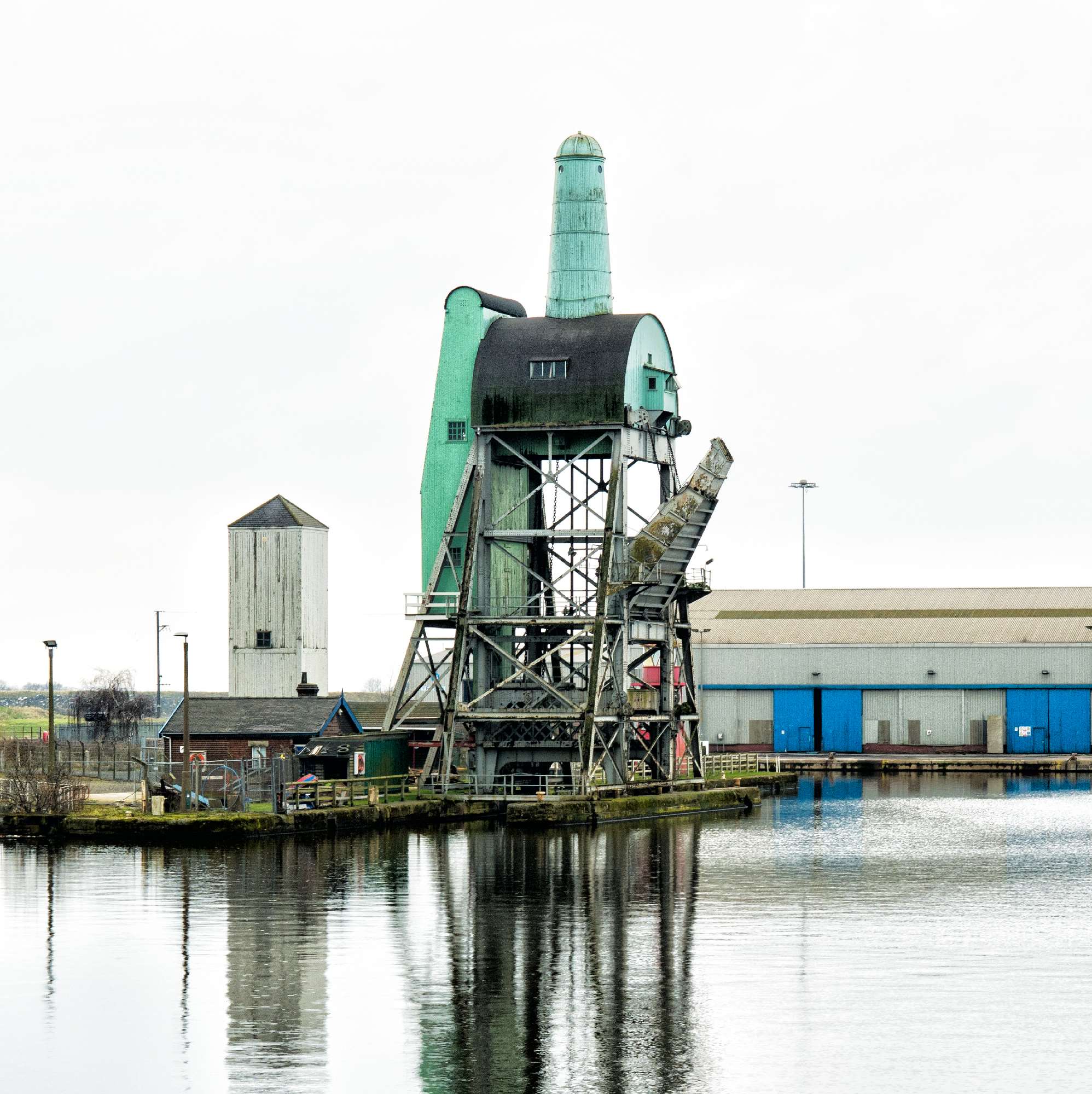 The string of Tom Puddings went under the coal lift, and one at a time were hoisted from the water and emptied into a waiting ship

There used to be four Tom Pudding lifts, three fixed and one on a floating pontoon. I believe this is the last one remaining.

Goole Port is situated 45 miles from the North Sea, and is the furthermost inland port in the UK. It was built as a floating harbour (the level was kept constant using locks down to the River Ouse), and opened in 1826, after which the town grew up around it.

The local saying is that Goole was “Born at the start of Queen Victoria’s reign, and died at the end“!

Goole is still very much a working port, though being Good Friday there wasn’t much activity going on. Fred and I managed a walk around most of the docks, though we were told by security not to venture too far off piste!

There still seems to be a good variety of goods and products shipped in and out (possibly more now than in it’s heyday!). 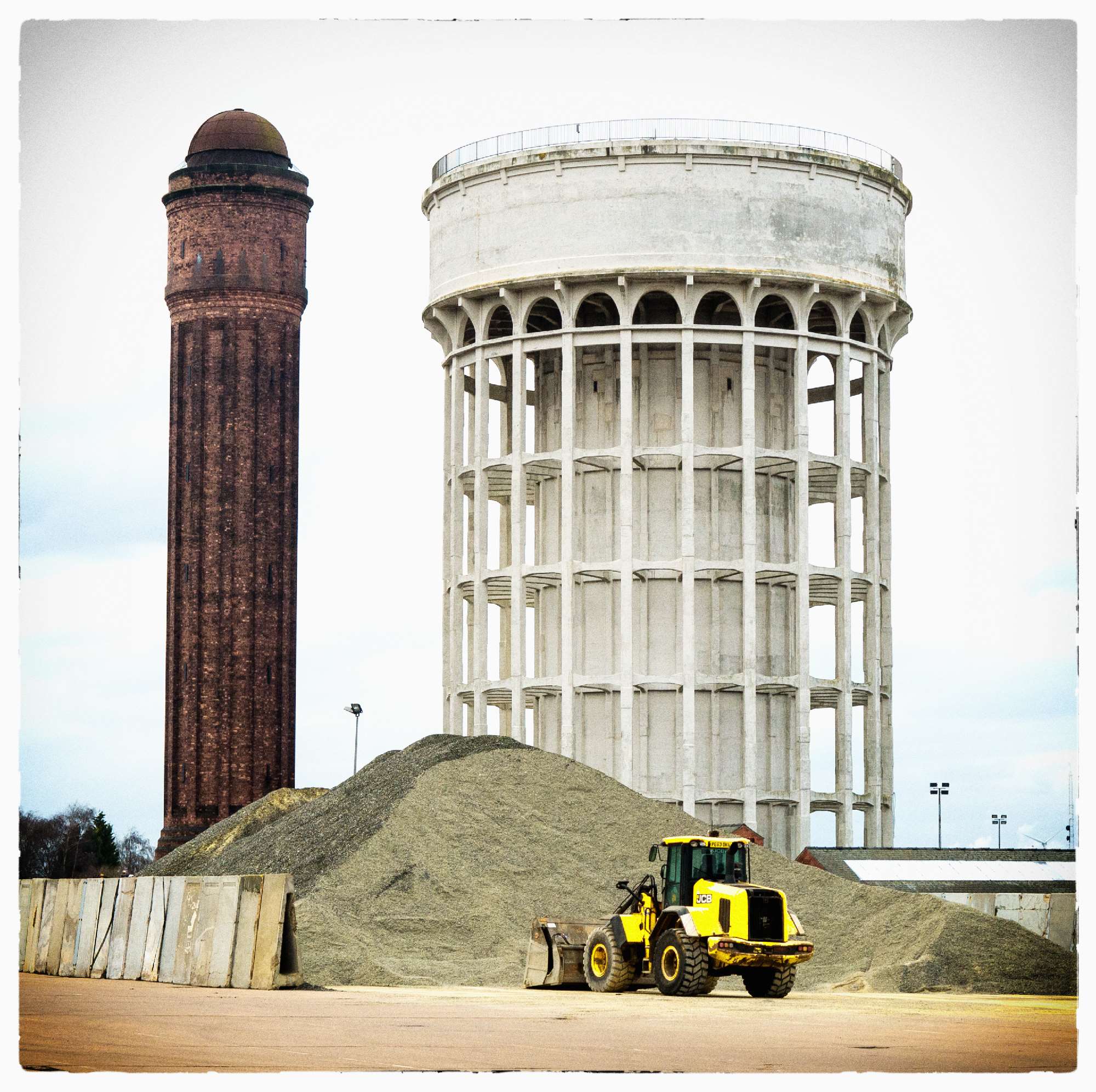 The twin water towers! Locally known as the salt and pepper pots.

After our little venture we decided it was time for a pint or two, and found the local Wetherspoons to partake of a few as at £1.79 a pint it was hard to resist.

Fred caught the train back to Sheffield on Saturday, and as the weather was so atrocious, I stayed put another couple of nights over the long easter weekend, before setting off back along the canal towards Leeds where I was due to re-connect with Sandra on Saturday 7th April. The dreadful weather almost prevented that …