Towards the end of March, we were contacted to enquire if we’d be interested in testing a Carbon Monoxide Alarm Tester-kit from ‘Gas Safe Europe’. What a brilliant idea! Regular readers will remember late last year we’d had a bit of a scare when our CO alarm went off in the middle of the night, after high winds must’ve caused a back flow from the multi-fuel fire and consequently fumes spread into the boat. The sound I heard (Barry slept right through it!), was a recurrent beeping. One I’d not previously experienced. It took a while for us to realise what was emitting the persistent sound.

That’s the challenge, what DOES a CO alarm sound like? How do you even know your alarm is working?

Needless to say we were more than happy to receive a sample tester kit to try out and review here.

“Be CO Safe on the Waterways this Summer

As boat owners prepare their crafts for the summer months, it’s often the most important life saving device that gets overlooked. Every year boaters die or are made seriously ill from carbon monoxide (CO) poisoning when it could be very easily prevented with the installation and regular testing of a working CO alarm.

The dangers of CO poisoning have been brought into sharp focus through recent highly publicised deaths in the UK, causing around 40 deaths a year, and hundreds to suffer from the ill effects of exposure.

In what should be a fun, relaxing and safe pastime, the dangers of CO poisoning are even more prevalent in boats due to the small cabin size, use of certain cooking and heating appliances, the engine proximity and extremes of temperature. The very nature of their watertight structure means gases cannot easily escape and build up quickly.

Also known as the ‘Silent Killer’, CO is produced when any carbon-based appliance and engine fuels, such as gas, LPG, coal, wood, paraffin, oil, petrol and diesel don’t burn completely.

Currently the Boat Safety Scheme (BSS) does not mandate the installation and testing of CO (or Fire) alarms in private boats – just public hire vessels – and does not require their testing as part of the Boat Safety Scheme Examination but is pushing forward to make them mandatory on all private boats in the future.  More recently, MP Niki Molnar MBE, has initiated a petition aimed at the Government to ensure all cabin boats using the UK inland waterways have a working CO alarm fitted. The key word here is working.

In a move that reflects the culture of the boating community, the National Caravan Council (NCC) announced that  with immediate effect, it is mandatory to annually test Carbon Monoxide (CO) alarms in caravans and motorhomes using a calibrated a test gas kit to ascertain whether the sensor is actually working. Just pushing the Test button on the alarm isn’t enough to ensure the sensor is working – it just indicates the battery, buzzer and circuit is still working.

As an early adopter of mandatory CO alarm fitting to all newly-manufactured caravans and motorhomes since 2010, independent reports received recently by the NCC have shown significant failure rates with alarms only a few years old and still well within the warranty period. Sensors may, for example, be sensitive to extremes of temperatures to which boats and yachts can be vulnerable – NCC tests have revealed alarm sensors can fail completely when exposed to low temperatures – and sensors can also become blocked through dust, food cooking, cigarette fumes, etc. The atmosphere inside a boats cabin may well be conducive to alarm failure – so regular testing should be carried out by the owner, or a qualified engineer with a calibrated, easy to use, CO testing kit that delivers the correct amount of gas to the sensor safely and efficiently.

John Stones, Founder and Managing Director of Gas Safe Europe Ltd, which manufactures the multi award winning, patented, Detectagas® comments: “Detectagas® enables users to test CO alarms by generating a safe, controlled and sufficient amount of CO directly into the alarm.  It is a simple test that takes only 2-3 minutes and yet can save lives.  We are delighted that the NCC is now mandating the gas testing of CO alarms to ensure that the CO alarms in leisure vehicles are functioning properly and hope that other organisations and regulatory groups adopt this soon to prevent any more fatalities.”

Our test and thoughts …

It’s taken a few weeks to get to this stage, due to my absence from the boat with family, then busily catching up on an assortment of ‘to action’ items – as well as valuable time spent socialising with friends in Leeds (more on that to come!). Today I prioritised time to test our CO alarm.

It’s extremely simple to use, the clear instructions are written on the aerosol can, it literally did take only a few minutes, and the accoutrements are all contained in the cap.

It worked perfectly – first time. Goodness me, the alarm is loud!

Once completed successfully, there’s a label to fill in with the date, a place on the lid to mark the can, and a recommendation to re-test in 6-12 months. The can contains sufficient for 11 tests which seems like extremely good value for money.

What price a life? Only a few days ago I read a story from Cannock which reported the tragedy of an elderly couple overcome by CO fumes in their home. She sadly died, he was in a critical condition.

On narrowboats there’s such a confined space it wouldn’t be hard for fumes to sneakily spread swiftly and engulf you into unconsciousness. 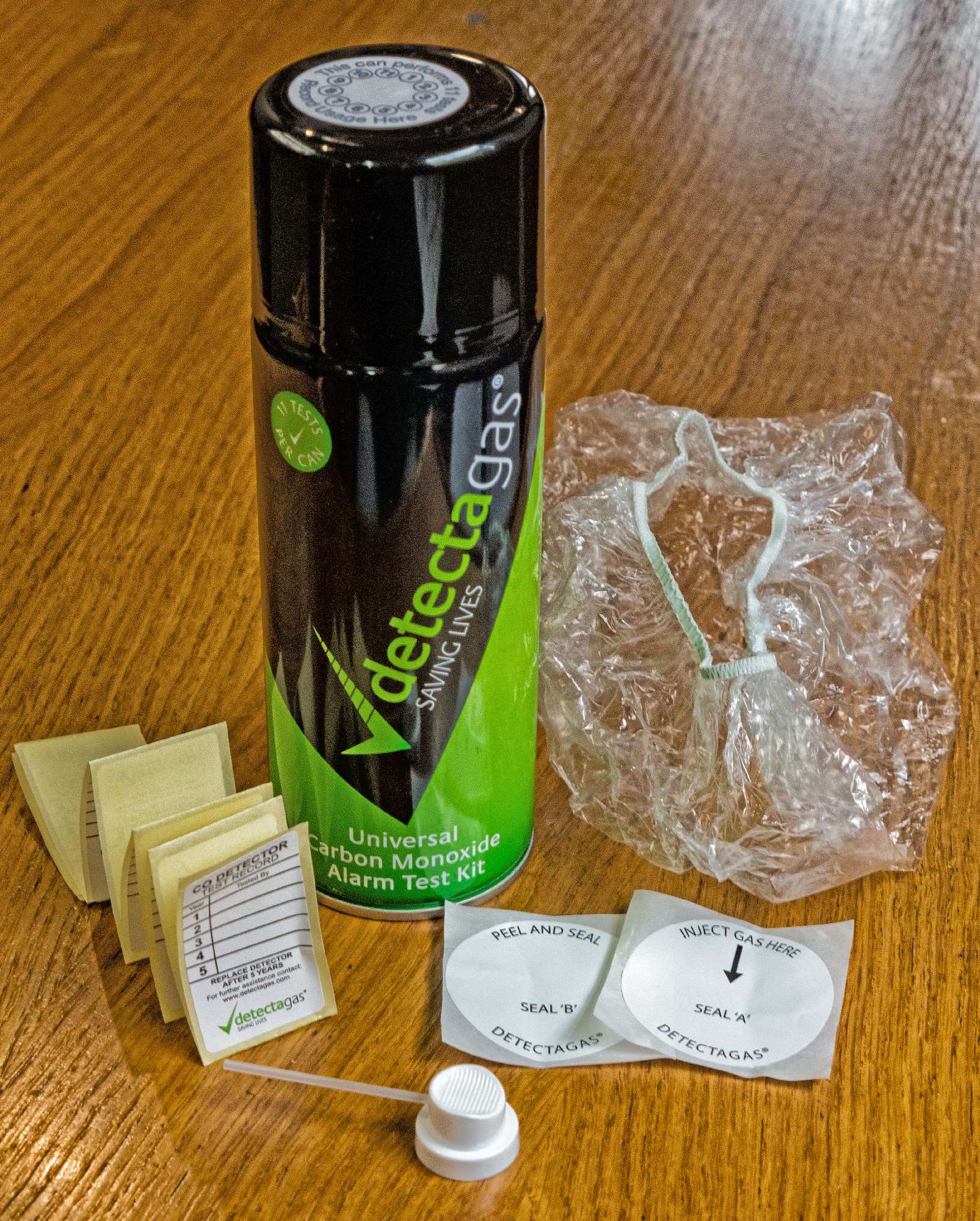 Basically, to perform the test, all you do is enclose your CO alarm in the ‘shroud’ (which looks like a disposable shower cap), and place sticker ‘A’ on it. You then puncture a hole in this using the tiny plastic (shame it’s plastic!) straw. Be careful not to lose this crucial piece of equipment …

Within seconds the alarm beeped as it did that night on board Areandare. At that time it kept beeping intermittently which is what woke me up.

This time, within 30 seconds, the real alarm unquestionably announced itself loudly. There’s no way you’d sleep through it! It was ear-piercing and unmistakable, and having heard it once I’m certain I’d recognise it immediately should I encounter it again.

It took a while for it to stop, needing to recalibrate itself with normal air and then be re-set.

Brilliant! We’d highly recommend buying this (for less than £20) to all boaters (and anyone else to be honest!) to make sure their CO alarm is functioning as it should.

Thank you to Mary Jane Greenhalgh for contacting us, and ensuring the kit arrived safely for testing.