Last week we relished four whole days on the visitor moorings at Victoria Quays in the heart of Sheffield. It’s a splendid basin – such a shame it’s not situated closer to the centre of the town. If it were, I’m certain it would be a thriving place of people enjoying the delights of waterside living, similar to inner city Birmingham.

It feels like Sheffield attempted to embrace the canal as other cities have, but it hasn’t materialised as far as we could tell.  The area was restored and redeveloped in 1992 to 1994, having ceased operation as a cargo port in 1970. It’s definitely worth visiting to see the Grade II listed buildings, and as a central point to explore the city. There are advantages to being located where it is – there’s only the noise of the traffic to consider when you’re moored (on the visitor moorings by the bridge), rather than all the raucous rowdiness that can become tiresome in other central city basins!

Having said all that, there are a number of businesses in and around the Quays – The Hilton Hotel, law firms, a gym, and two static hotel boats. There’s also a brand new bar which Barry only discovered on the last night due to it’s camouflaged signage. More on that at the end of the post …

Mind you, on the day I was winding my windlass to close the swing bridge, which is the walkway across the canal, there were an inordinate number of people dressed in business suits waiting patiently. My arms ached for days afterwards, it has to be the most difficult contraption I’ve come across, needing a lot more muscle than I possess.

Here’s Barry’s view of our walks around Victoria Quays and Sheffield: 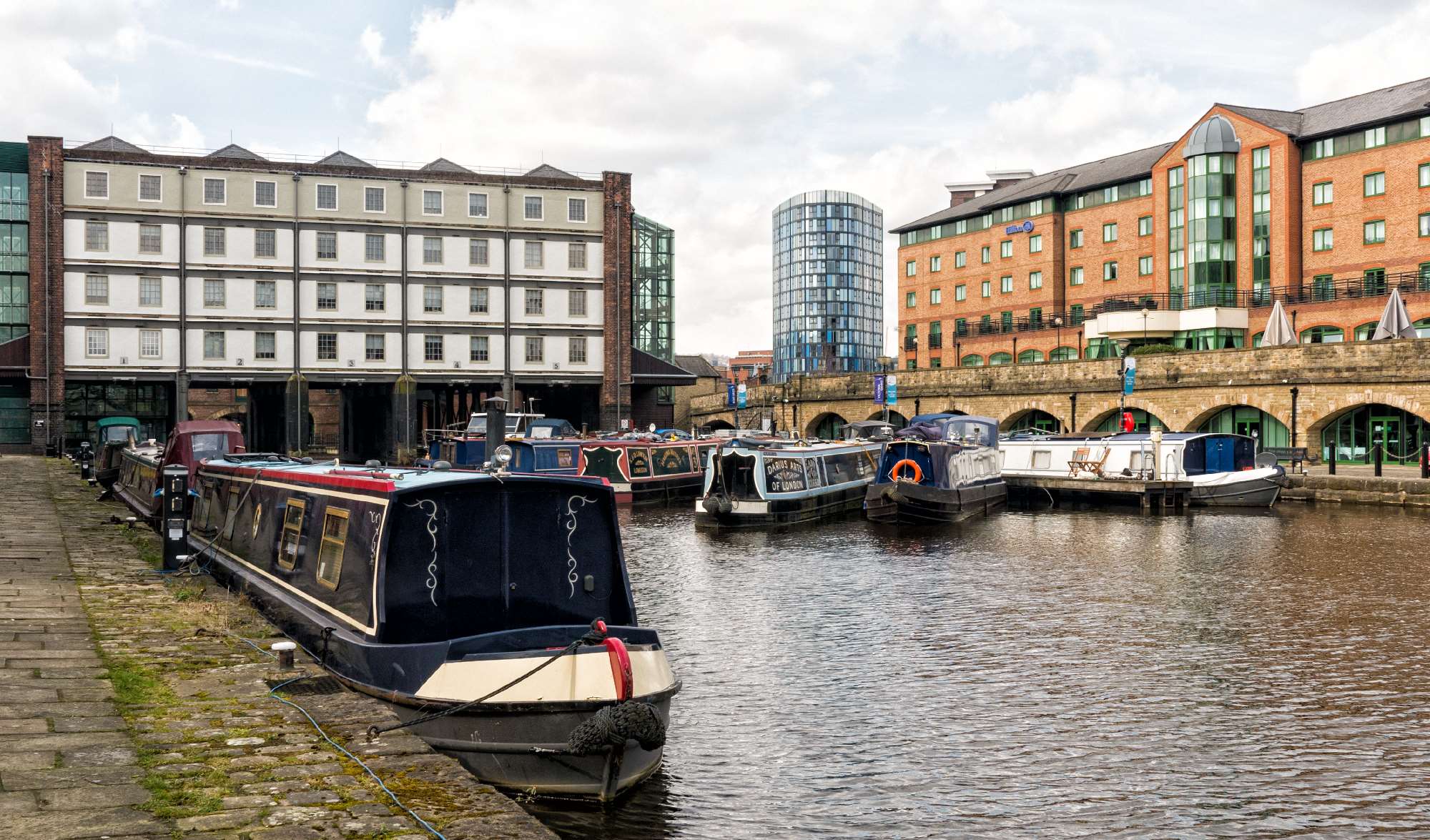 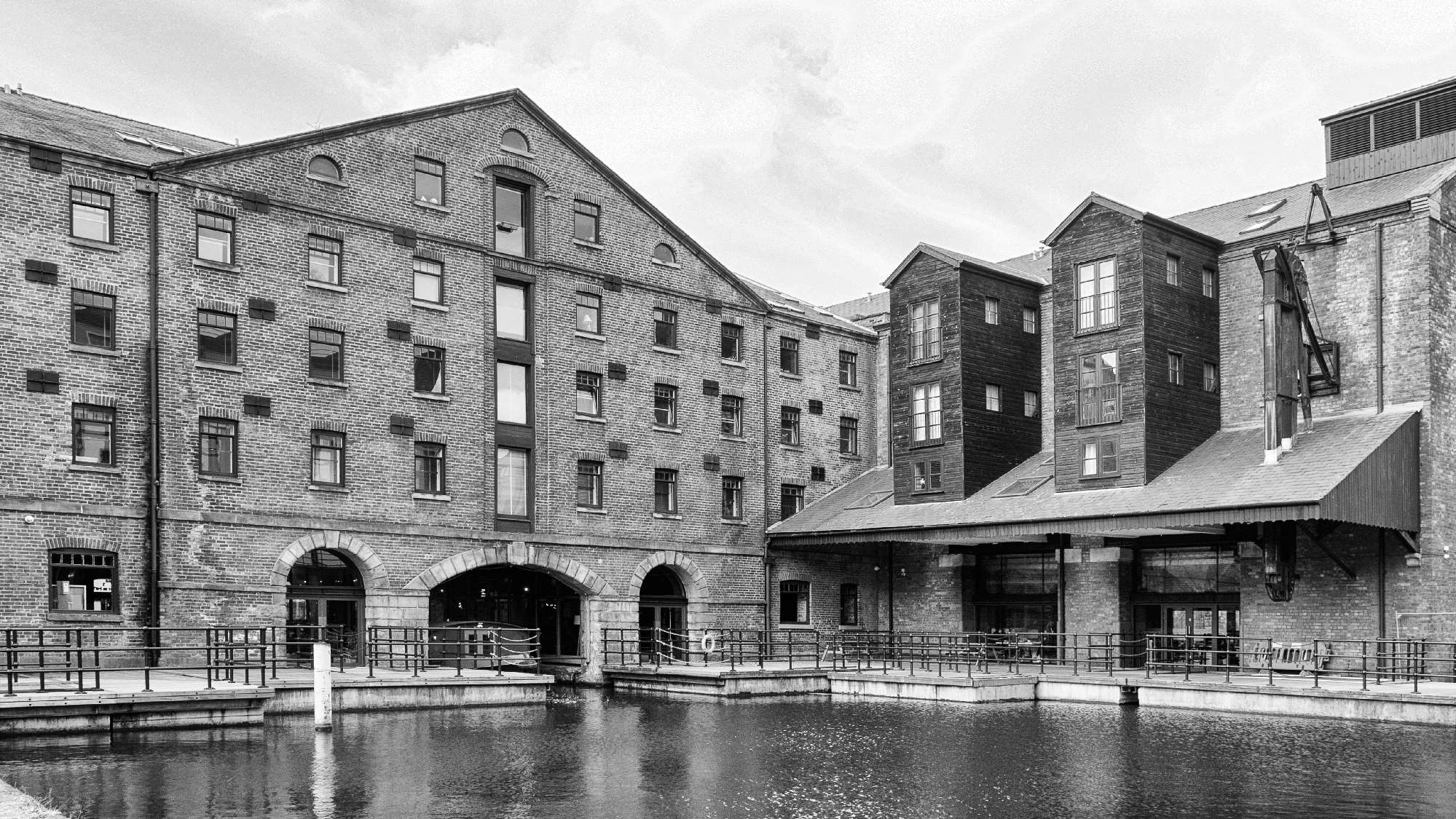 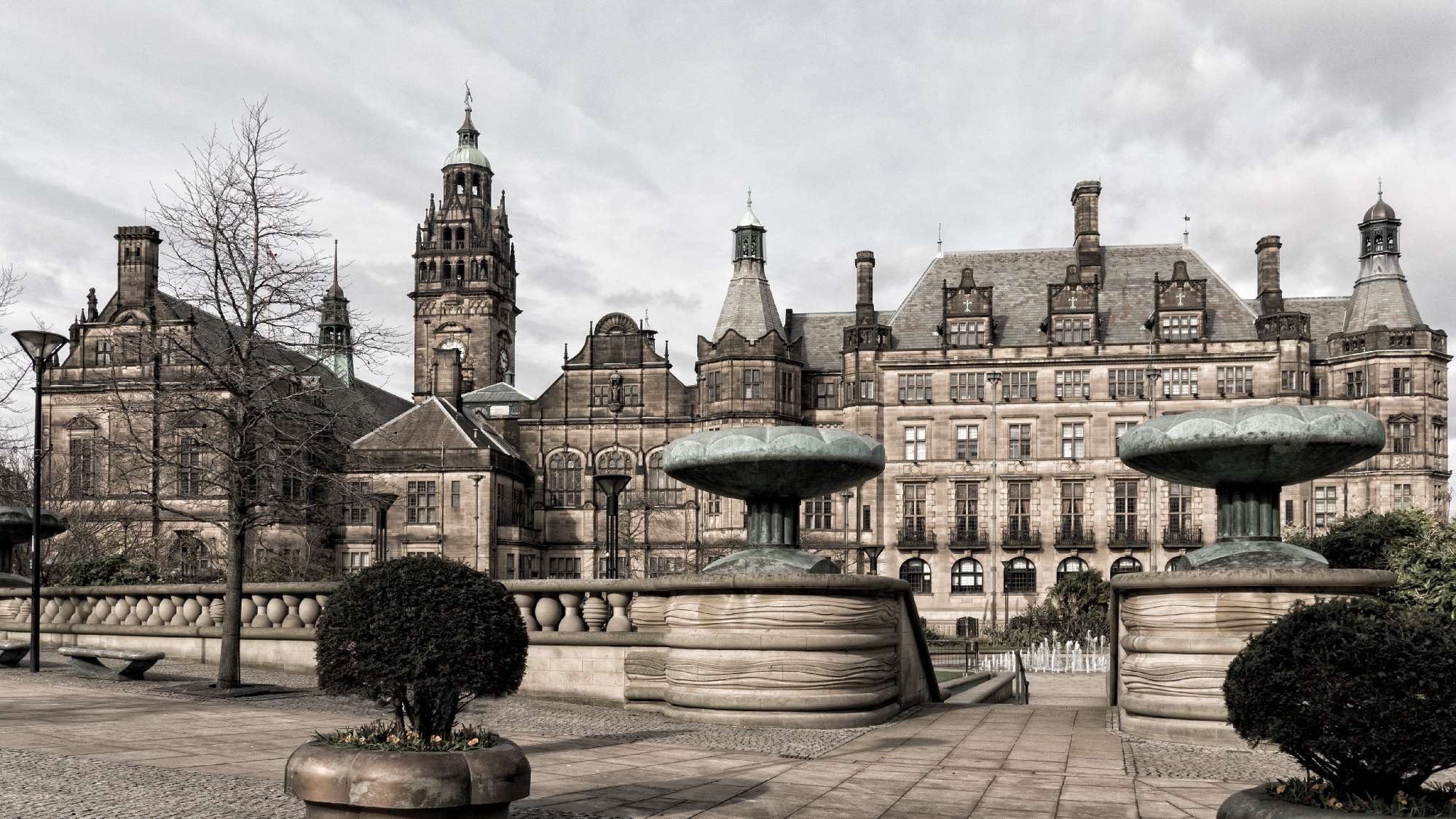 The spectacular Peace Gardens in Sheffield 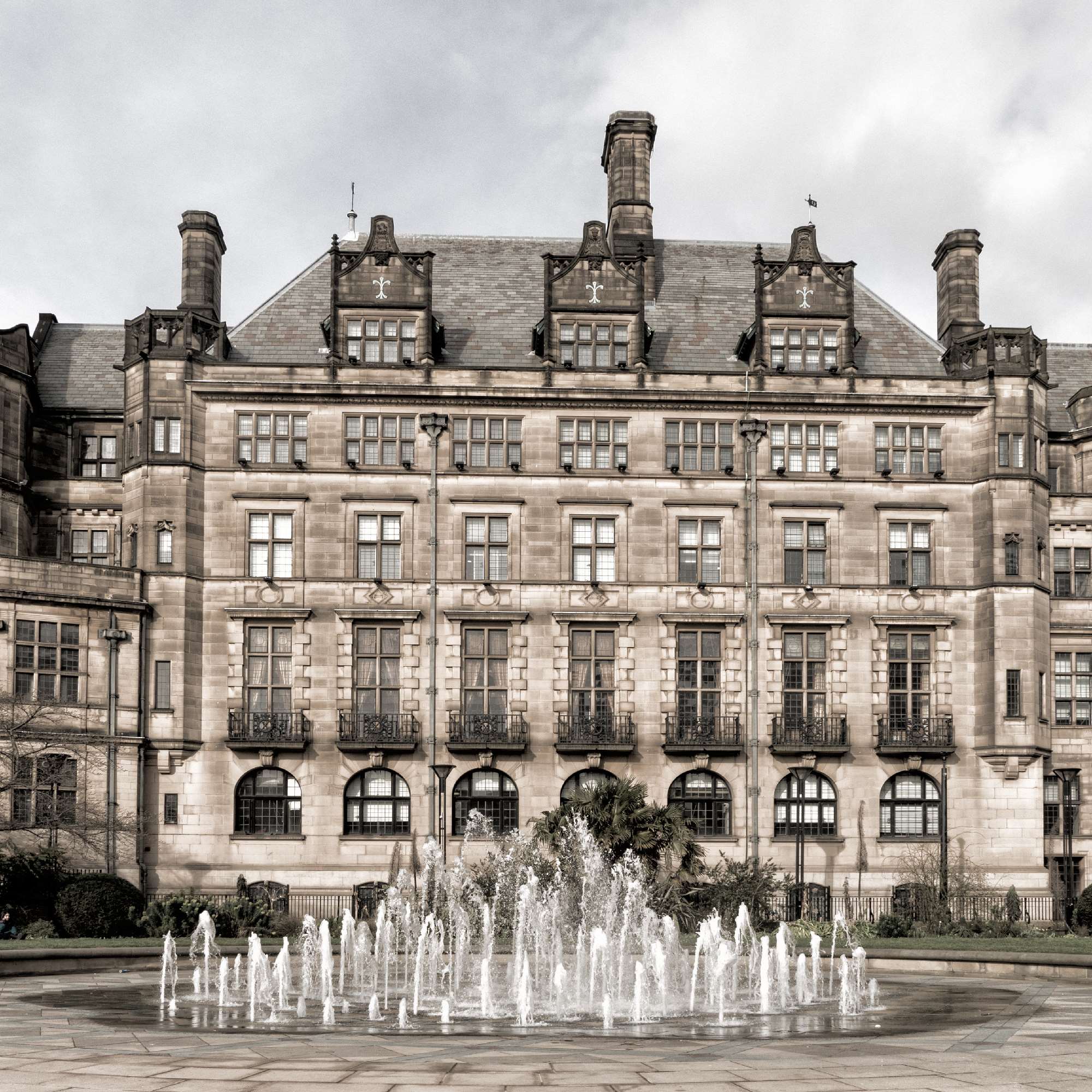 In the Peace Gardens, looking at the back of the Gothic Town Hall 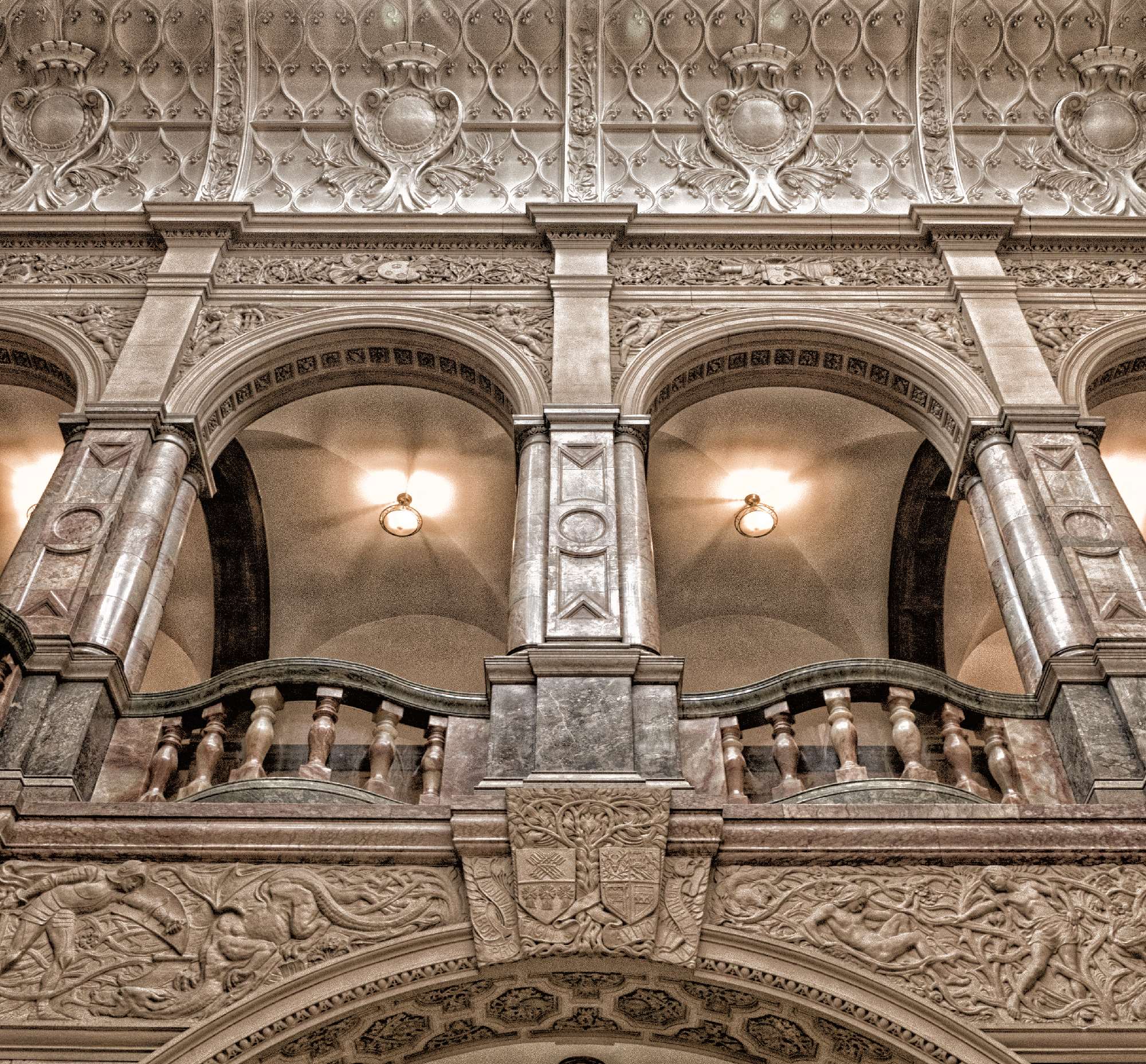 We walked to the front of the Town Hall and gazed in awe around the main entrance – and were thankful for  a fascinating talk with the Security Guard, including the model of Queen Victoria opening the building using a remote-controlled key from her carriage outside on 21st May 1897! Amazing. The key turned on a light which signalled for three hidden men inside to open the gates. 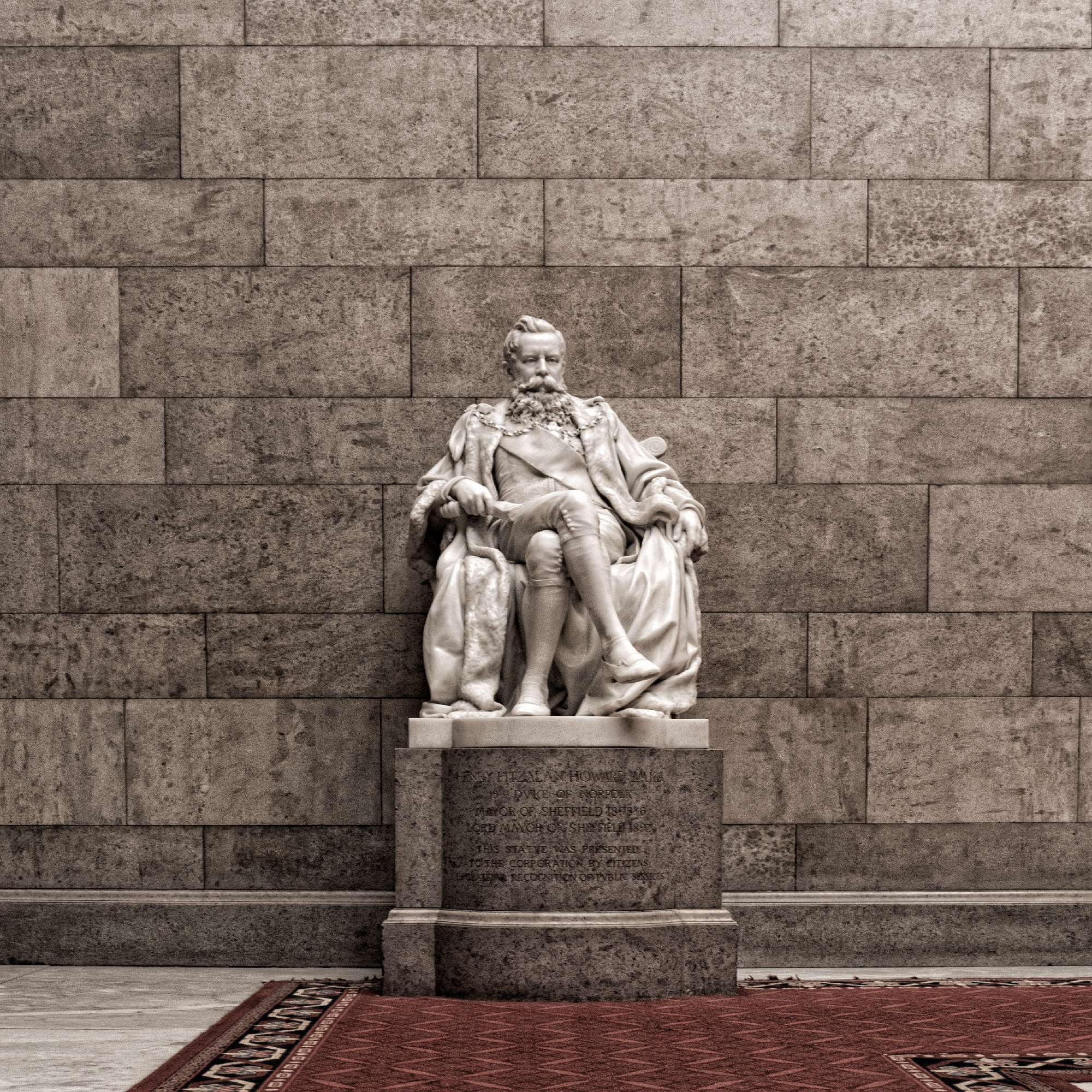 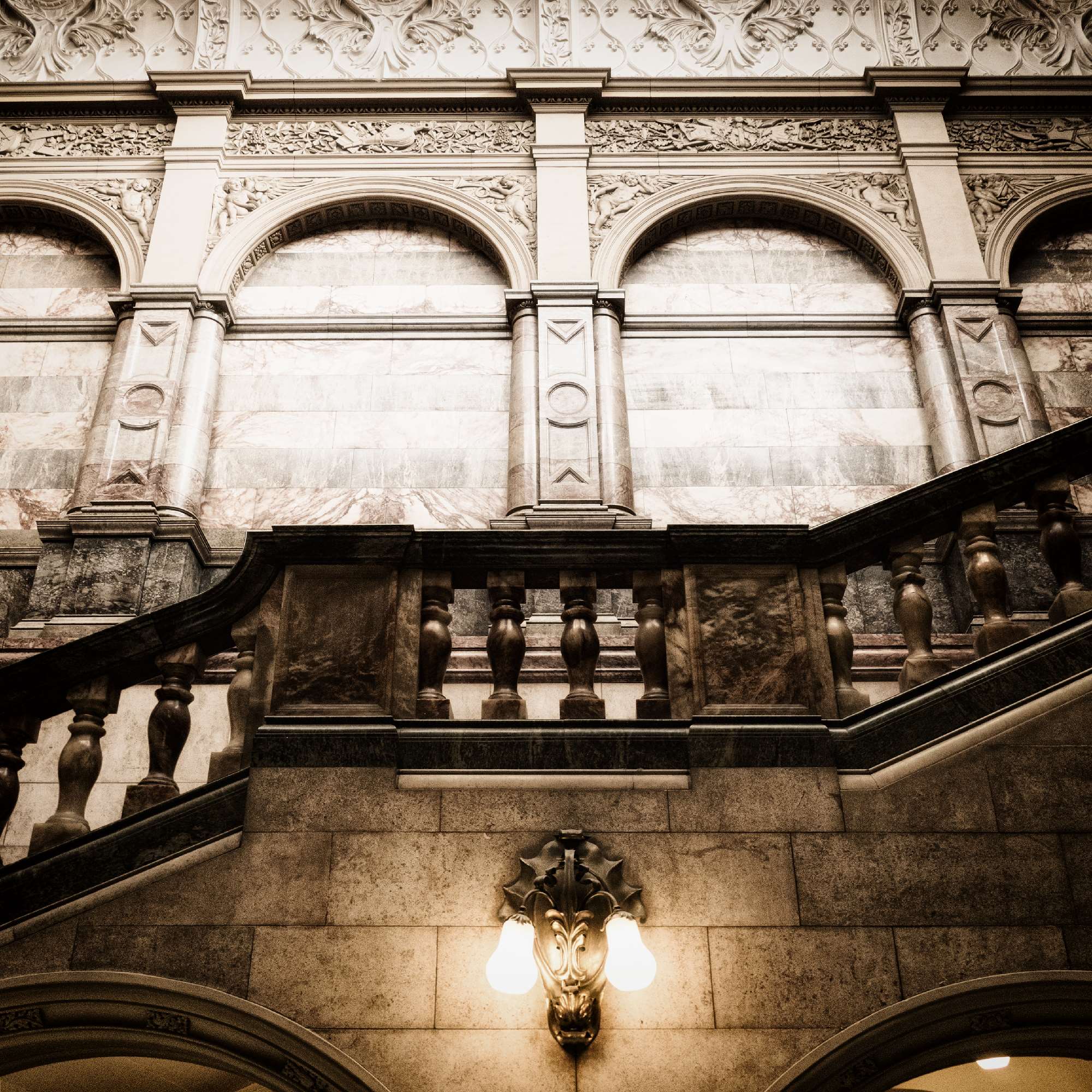 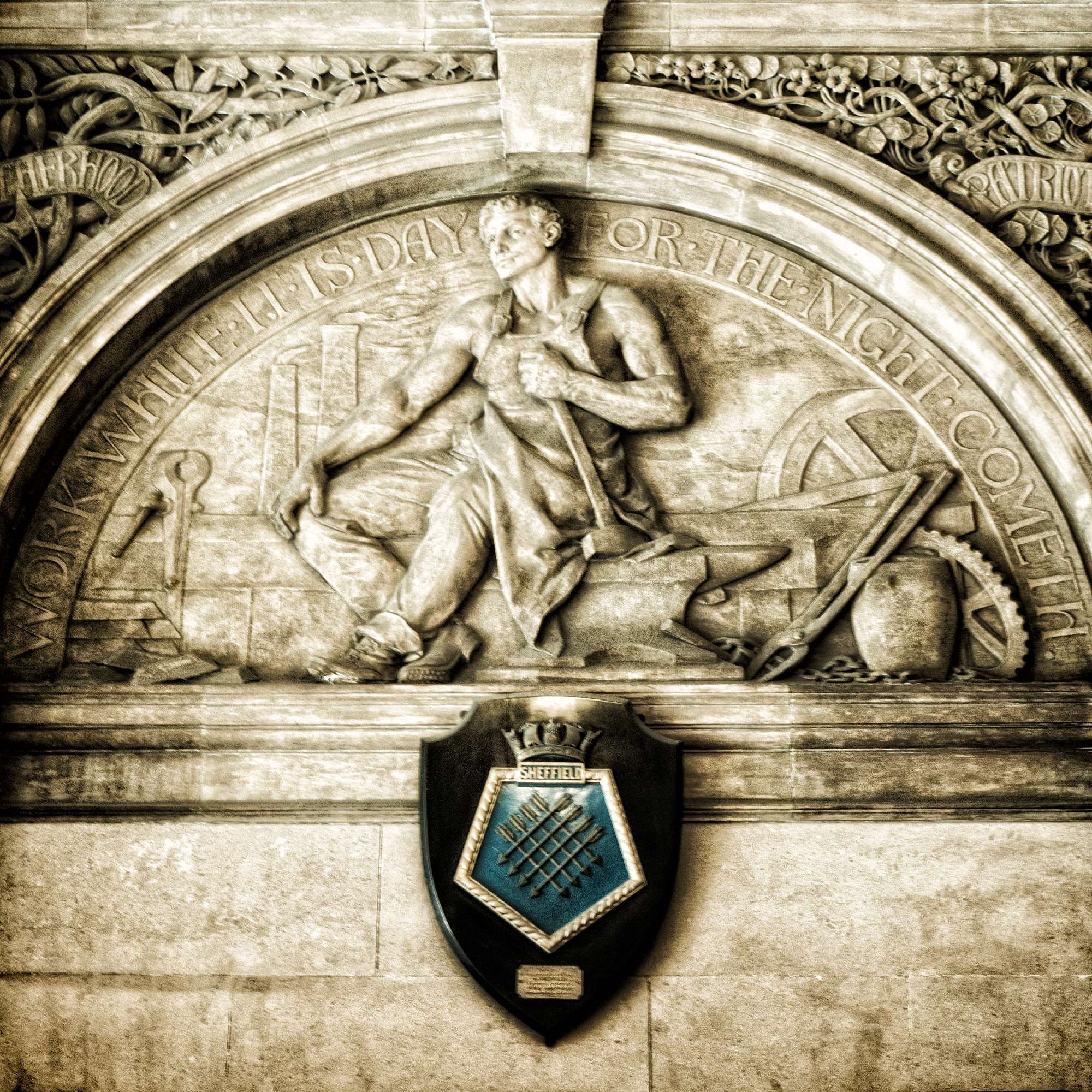 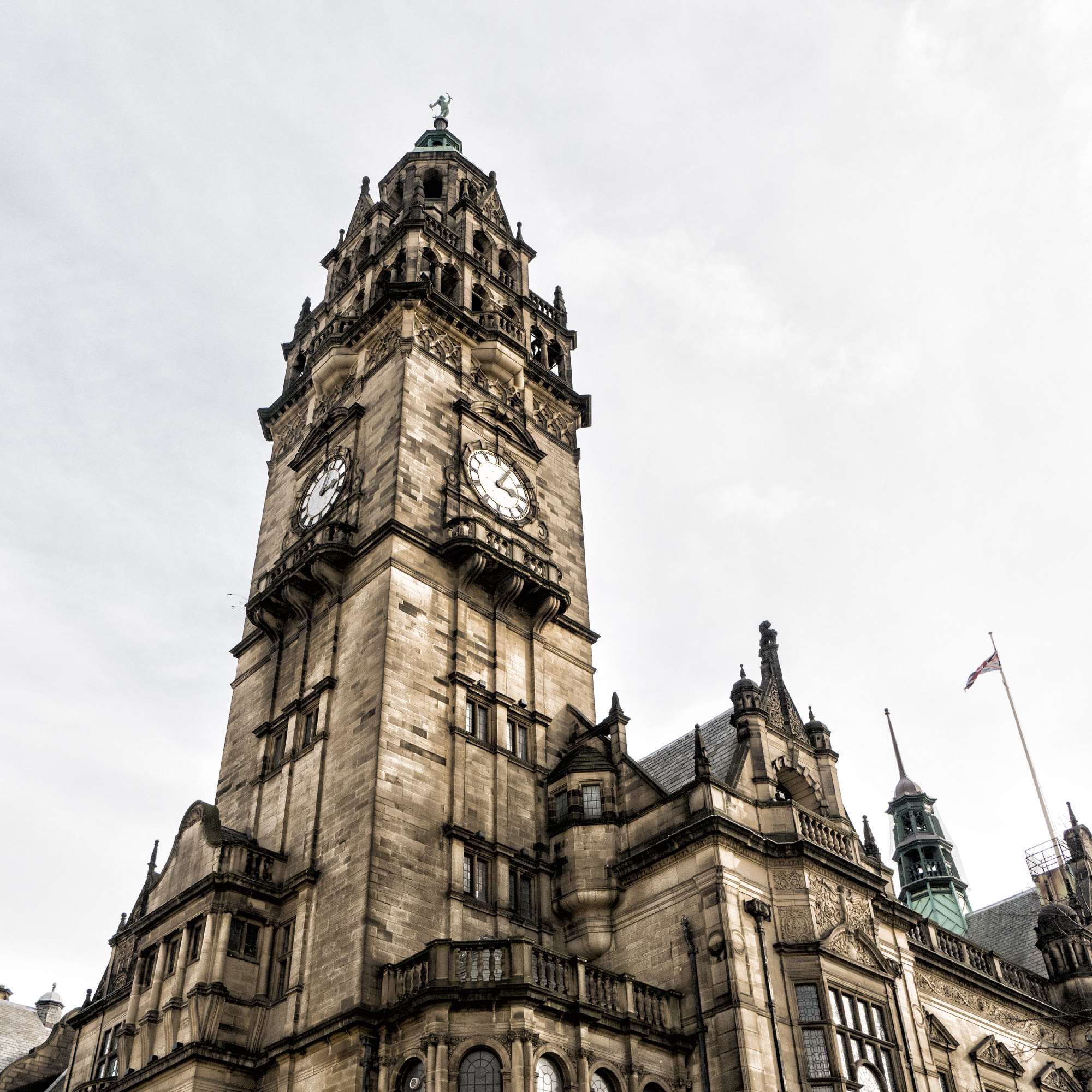 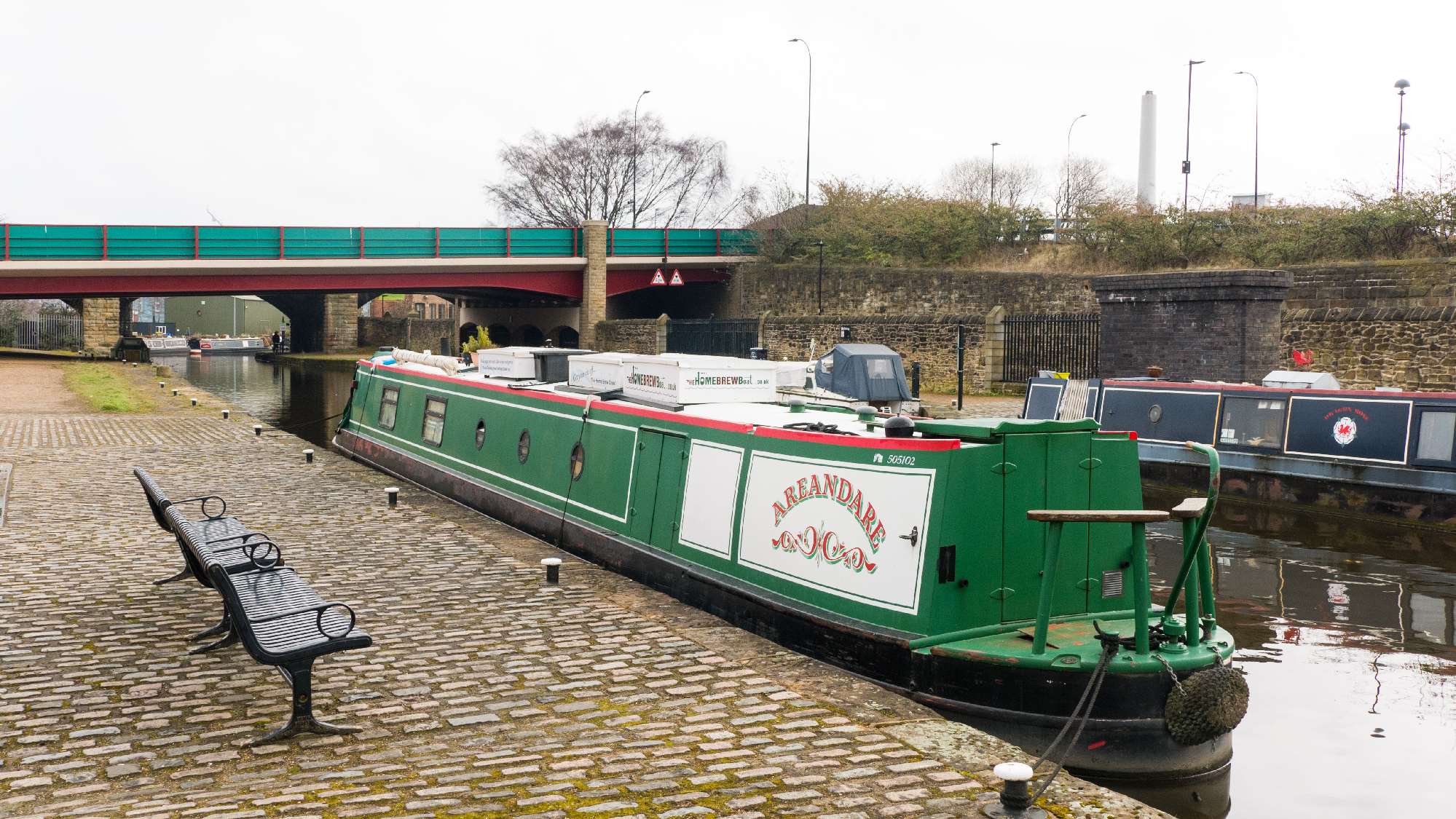 Back to Areandare sitting happily on the visitor moorings 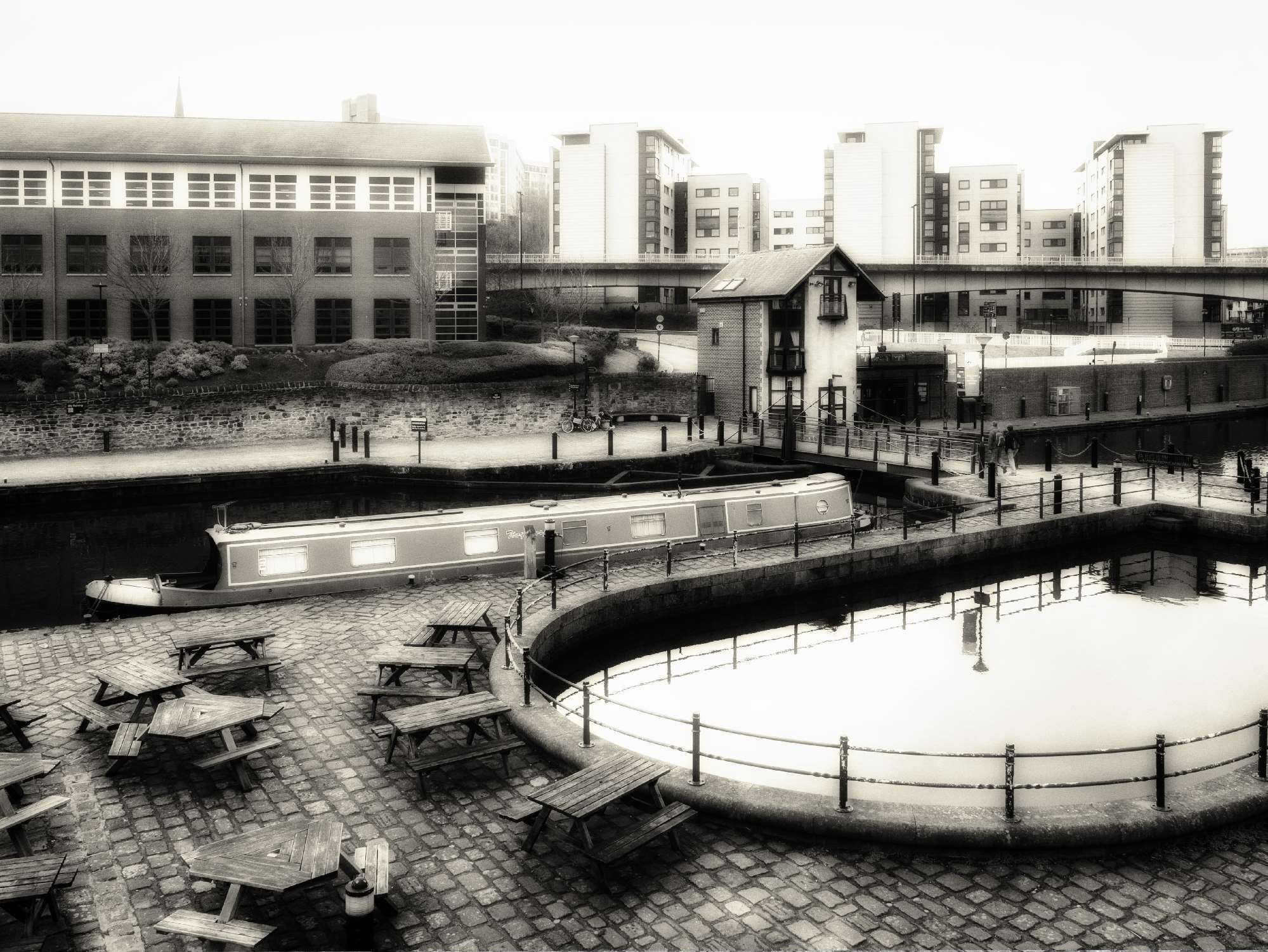 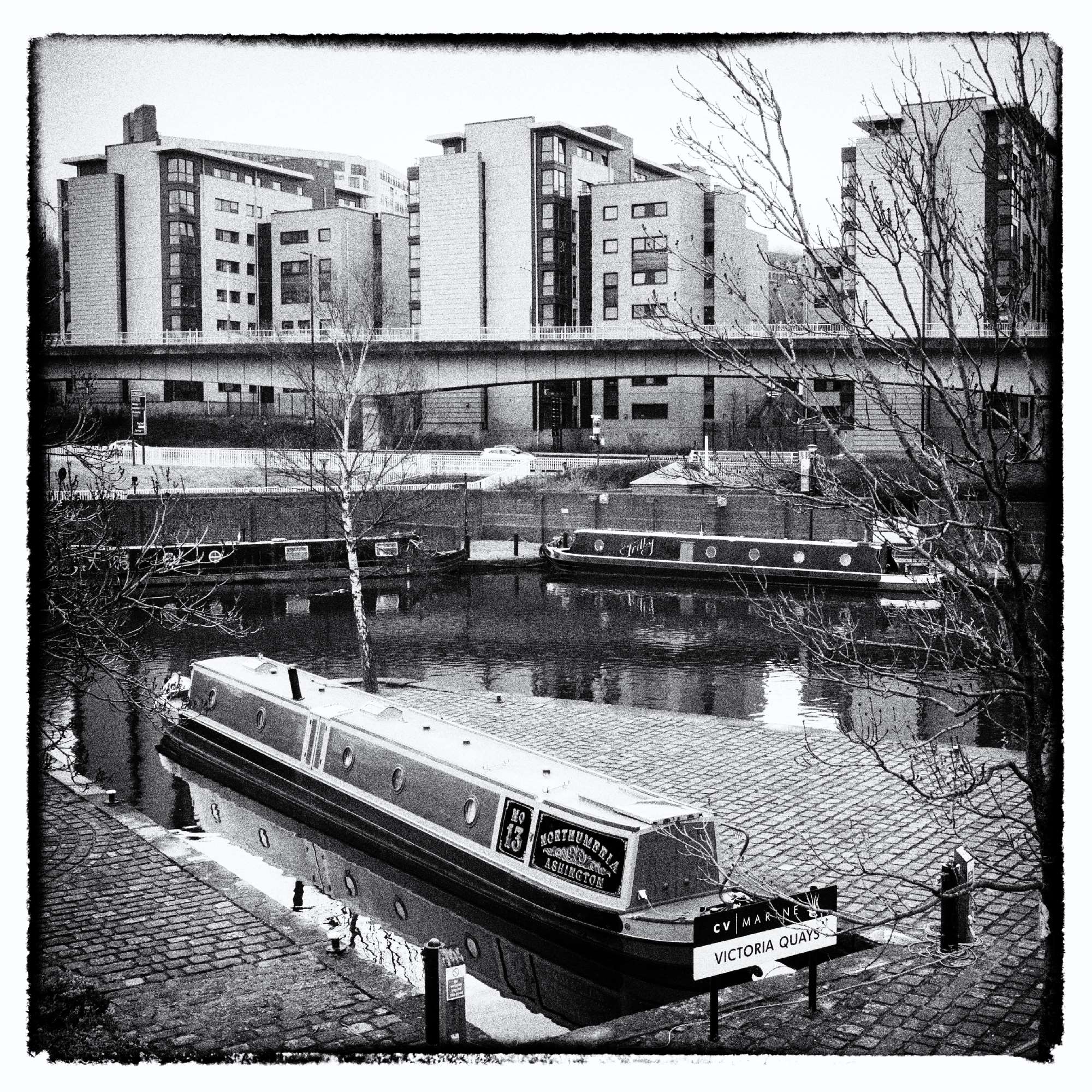 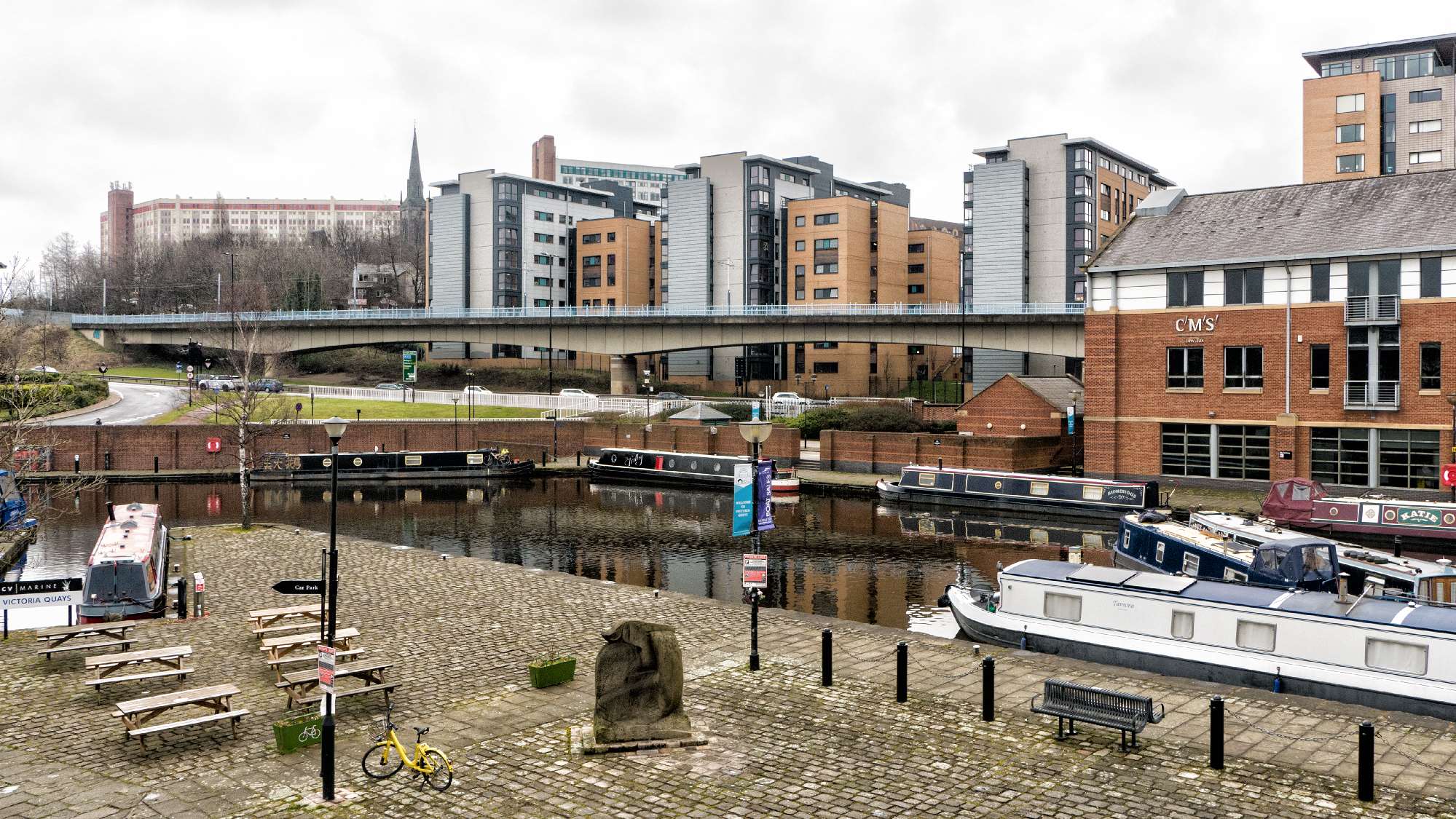 Quite a few boats moored here that look like liveaboards 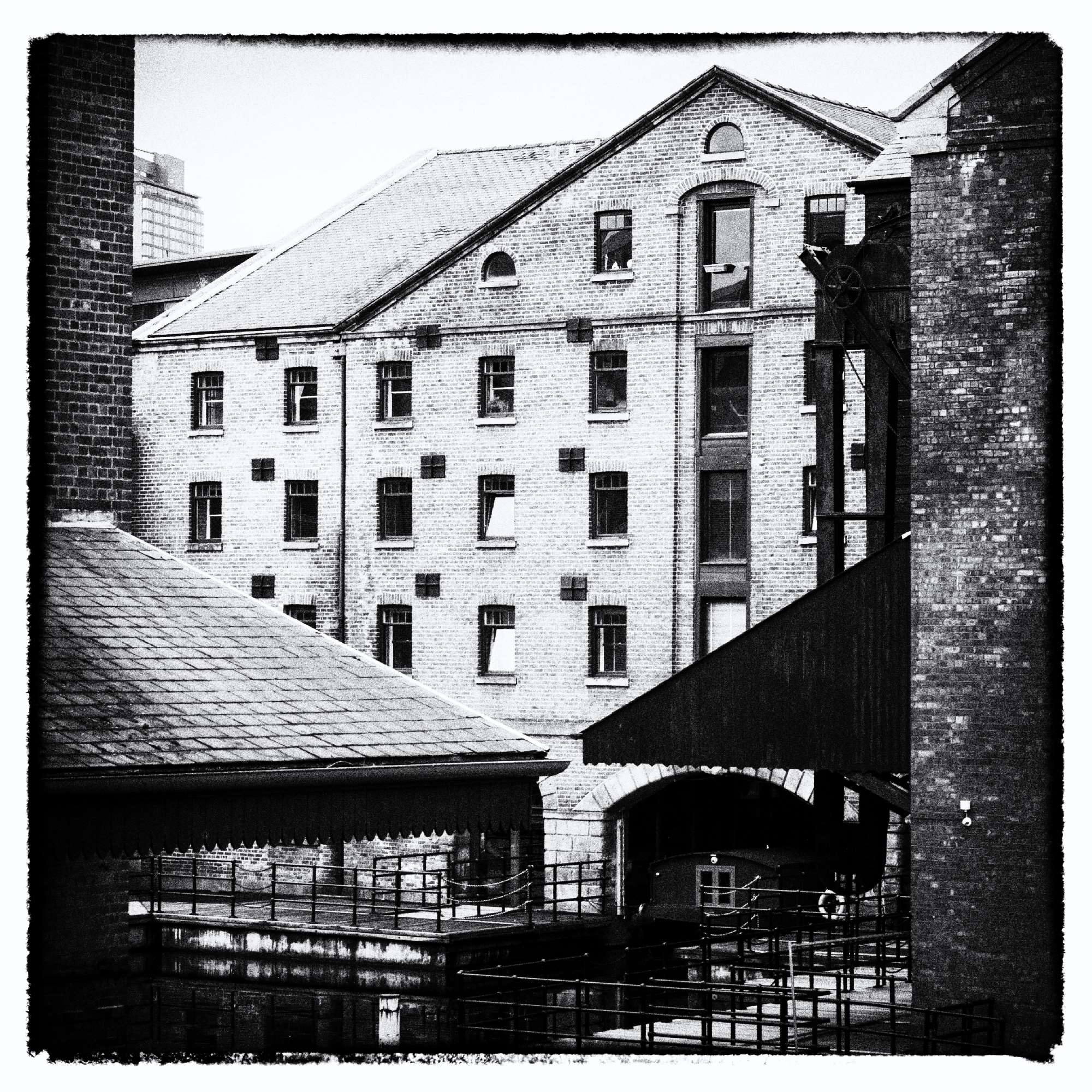 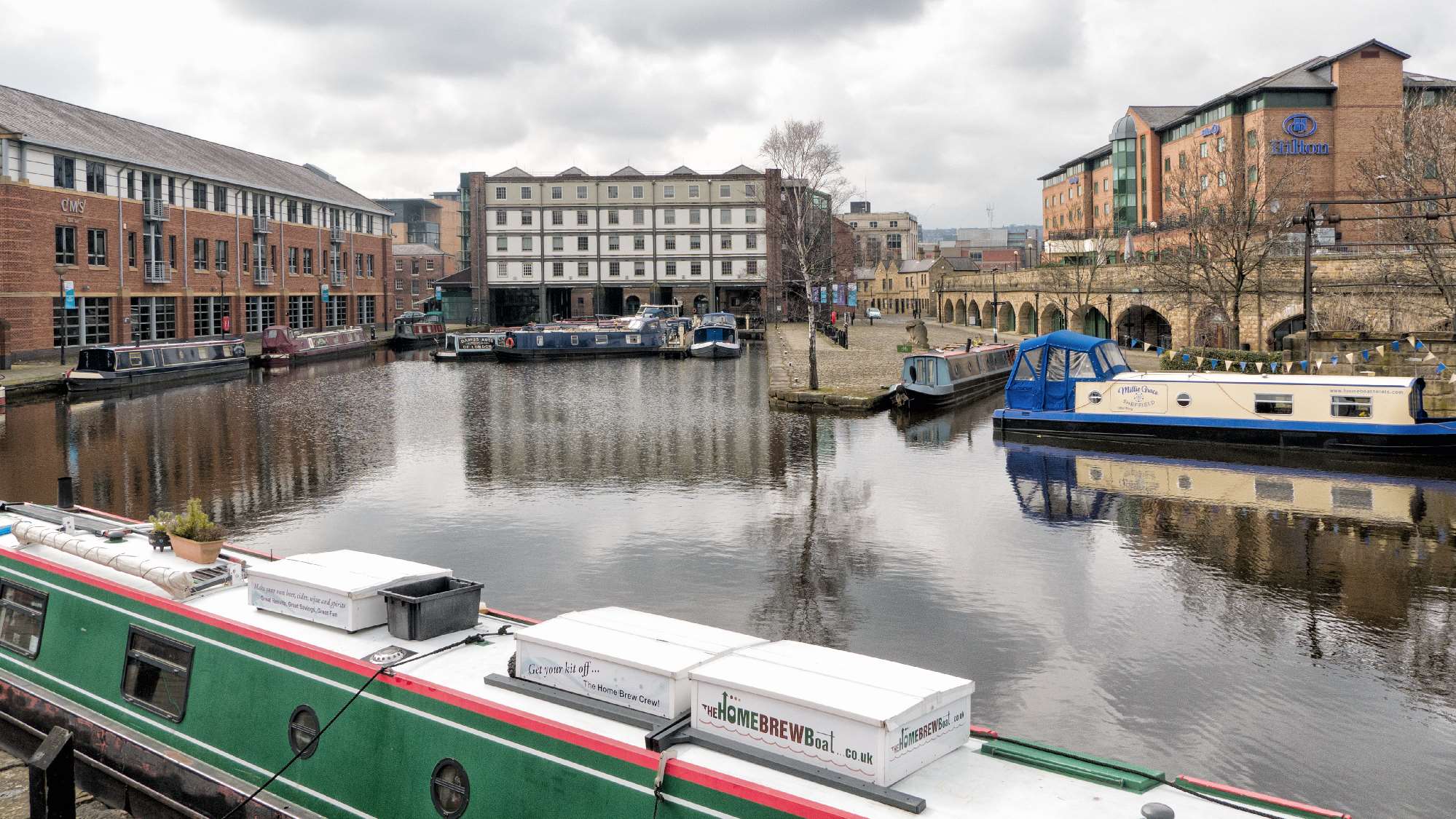 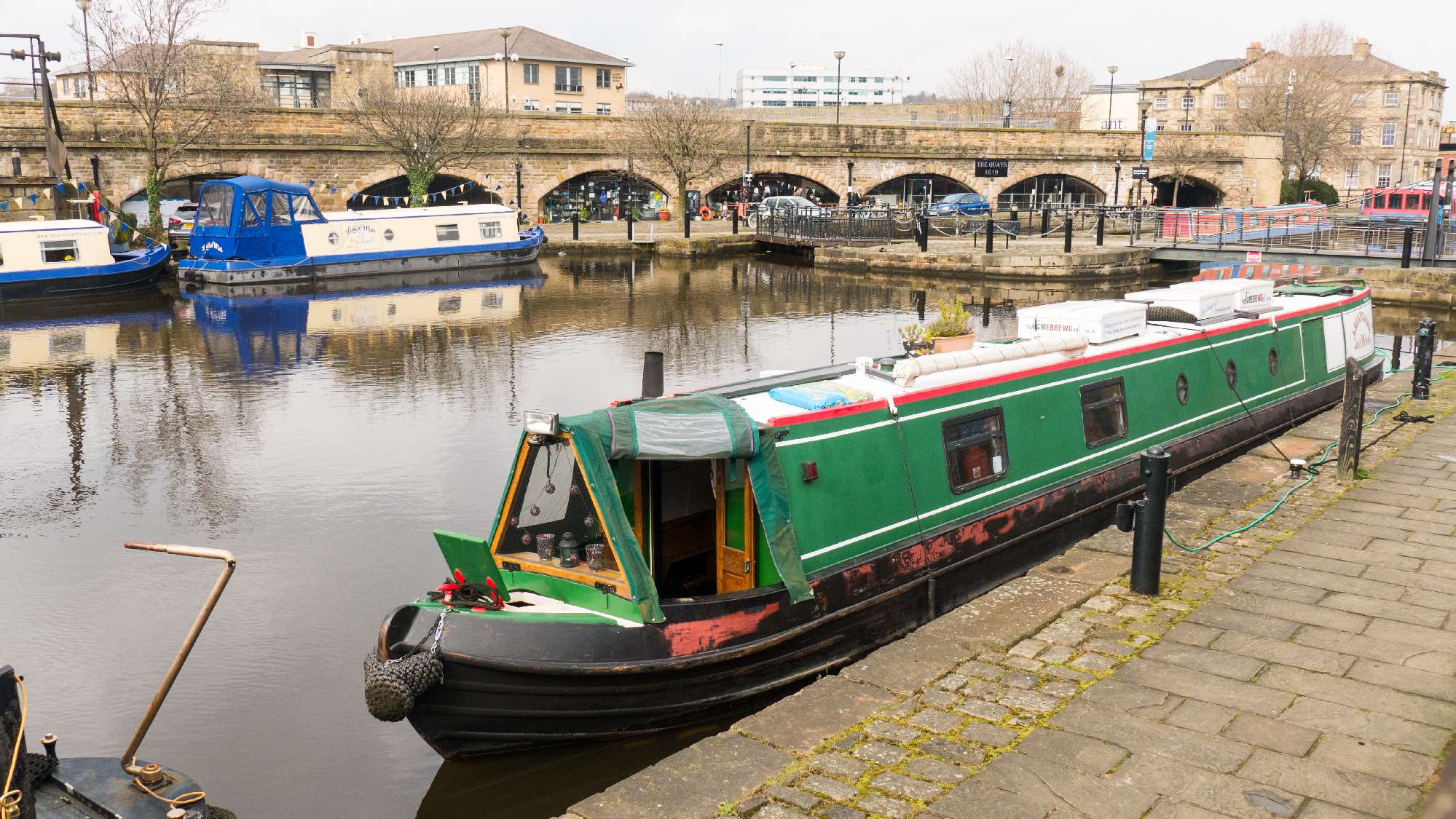 … and the other side showing the listed arches 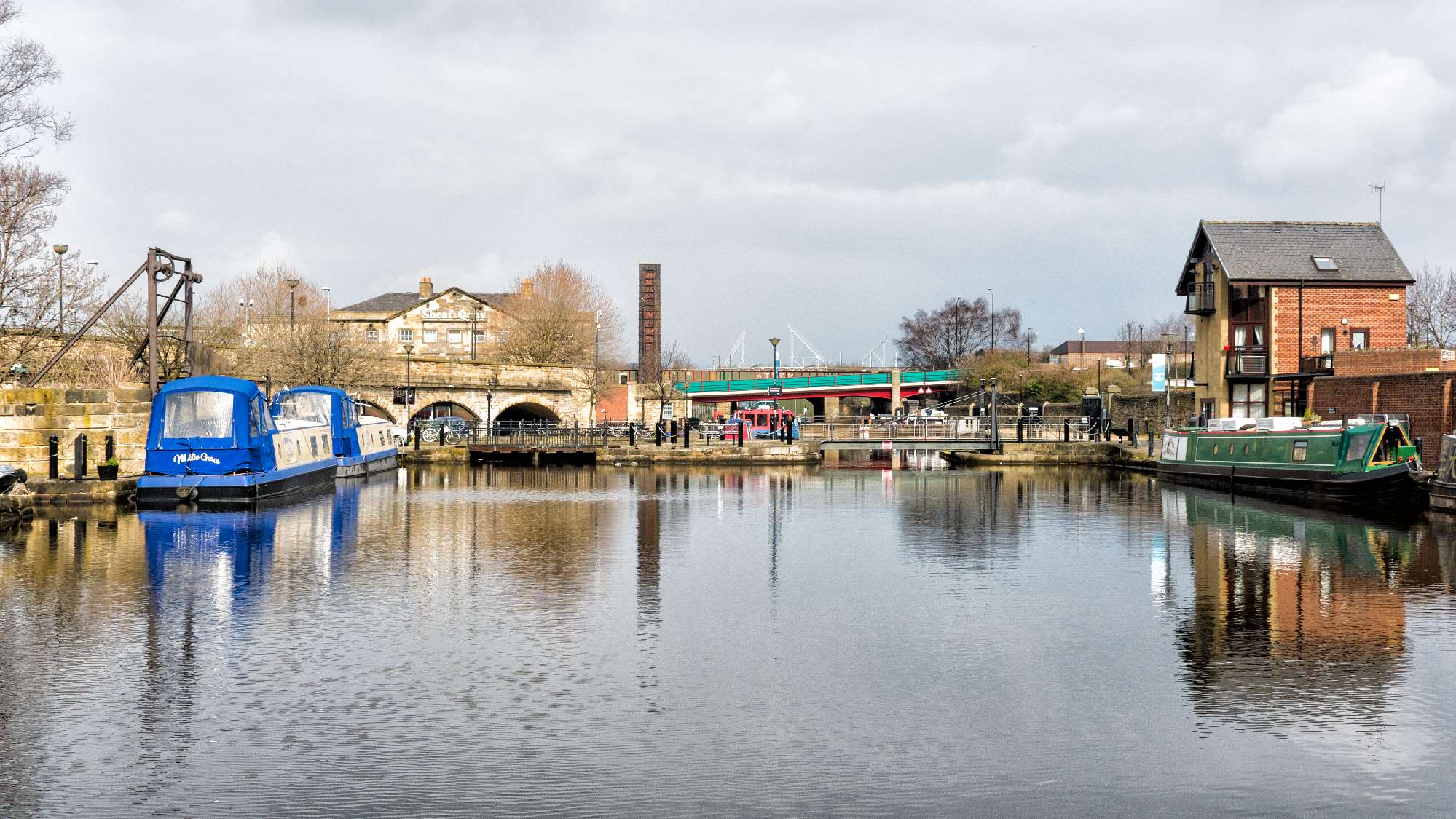 Looking back towards the Sheffield and South Yorkshire Navigation 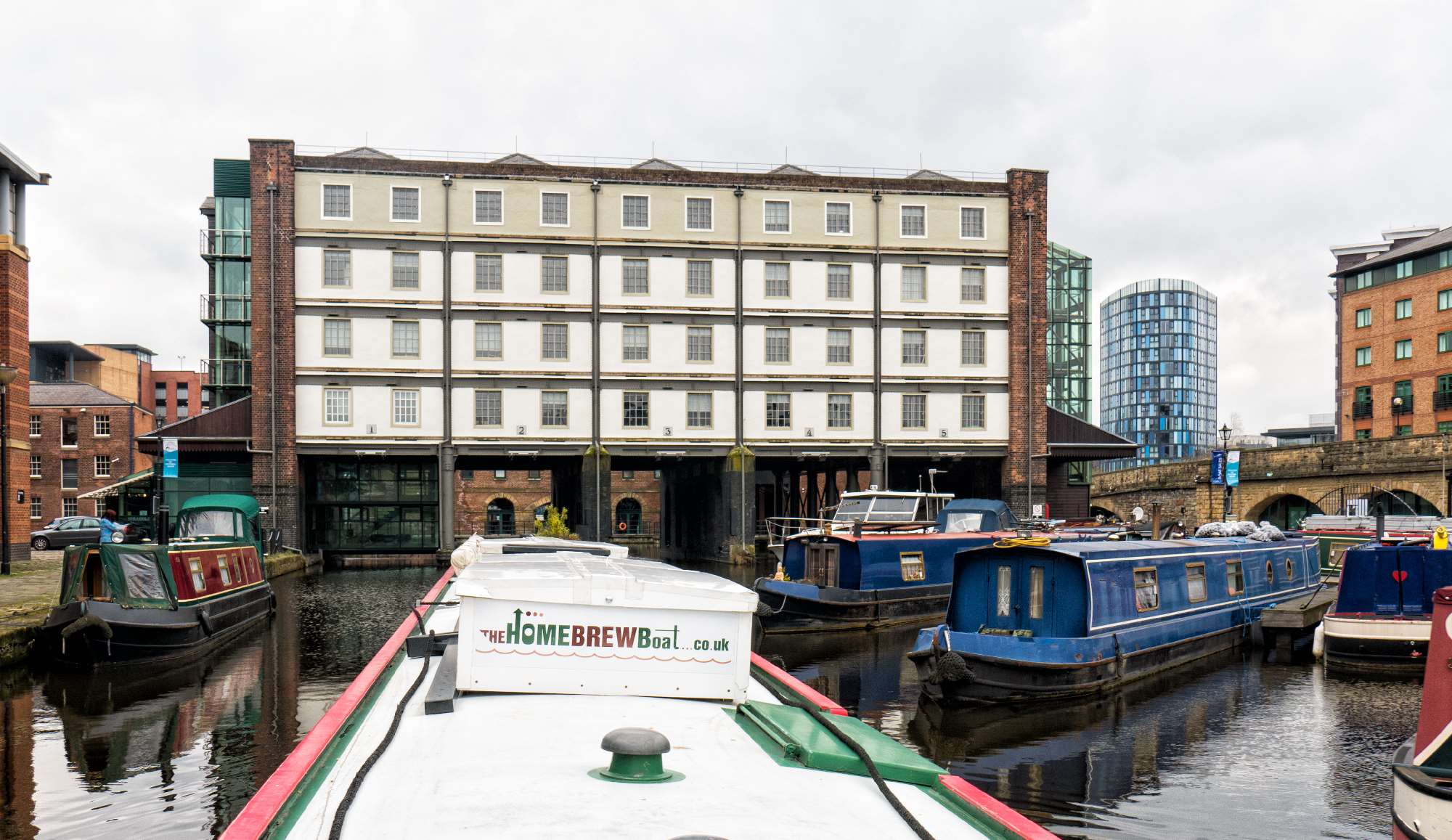 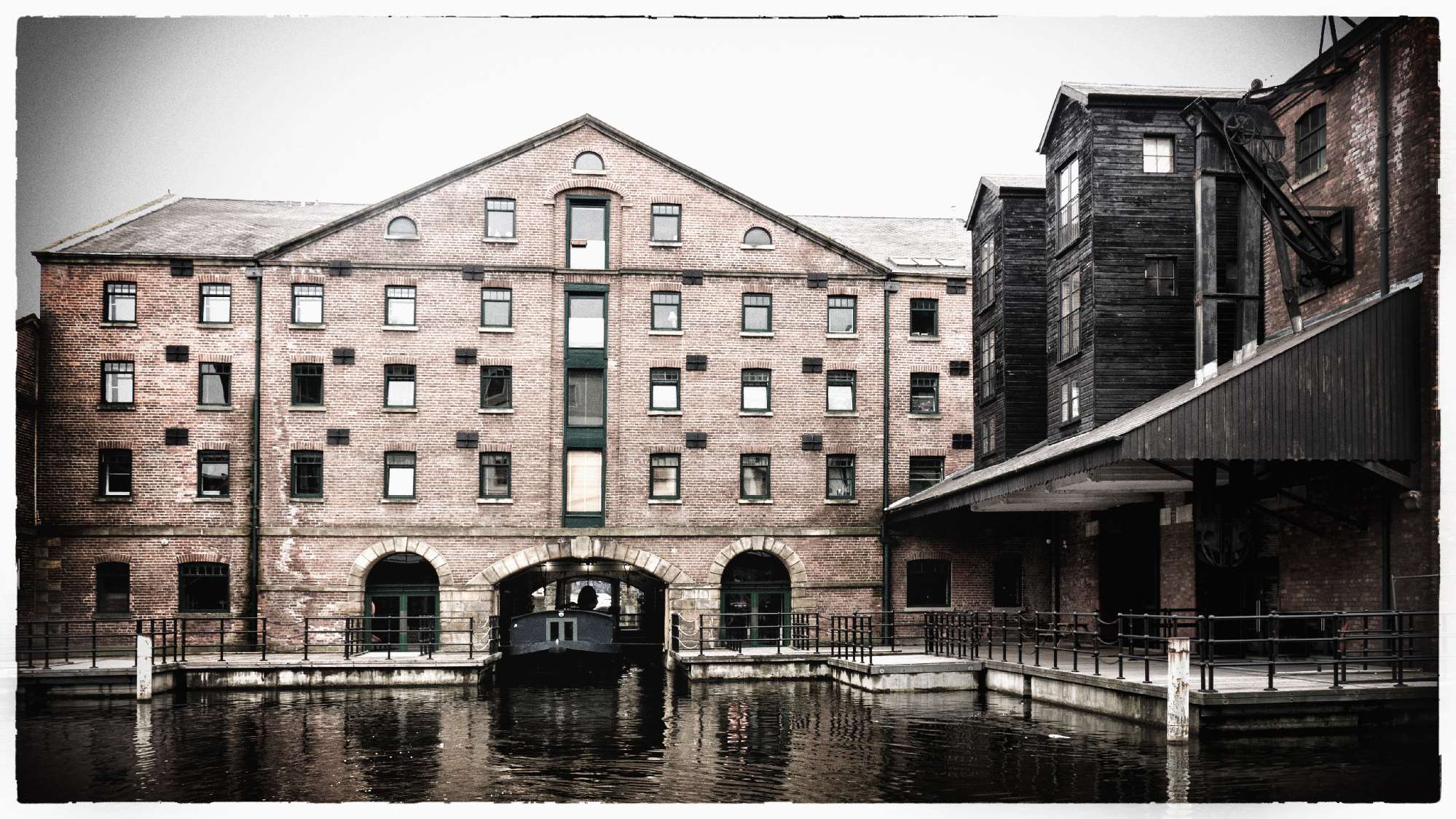 The Straddle Warehouse and Grain Warehouse – steeped in history 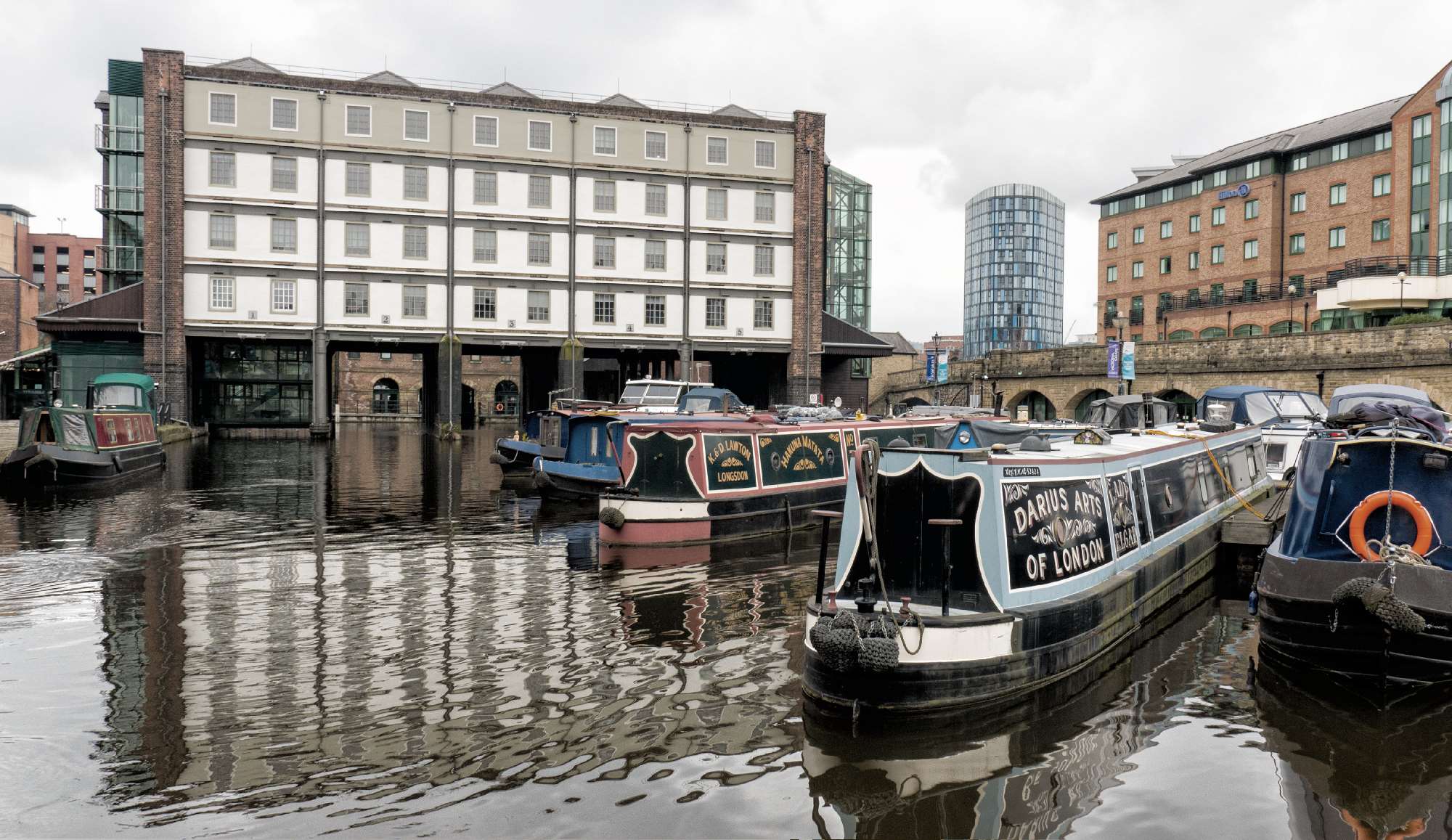 Despite there being few people around in the evenings, the Straddle Warehouse is illuminated in an ever-changing variety of coloured lights and is magnificent. A spectacle to be proud of – thank you Sheffield! 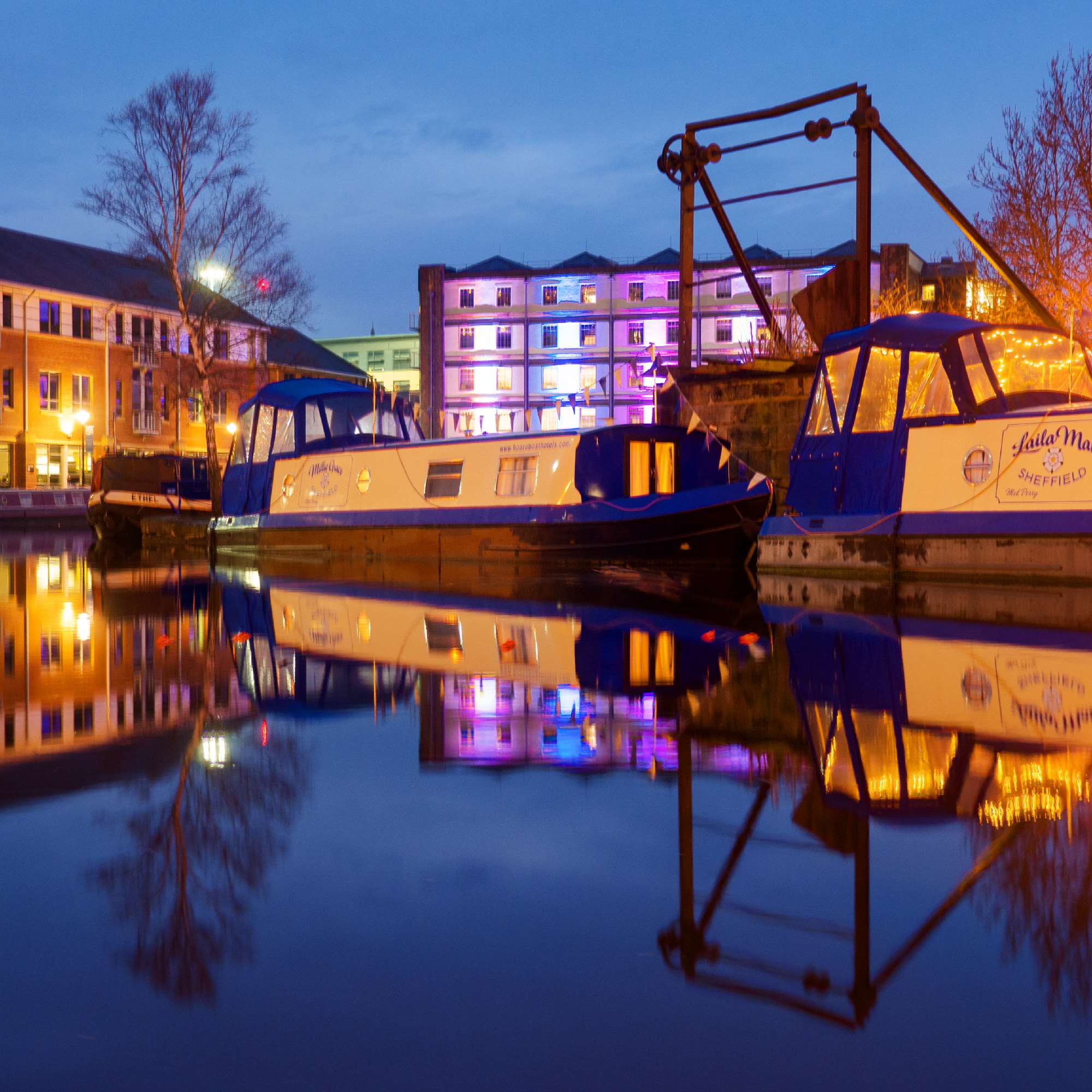 The Houseboat Hotels situated in Victoria Quays (you could come and stay here even if you don’t have your own boat!) 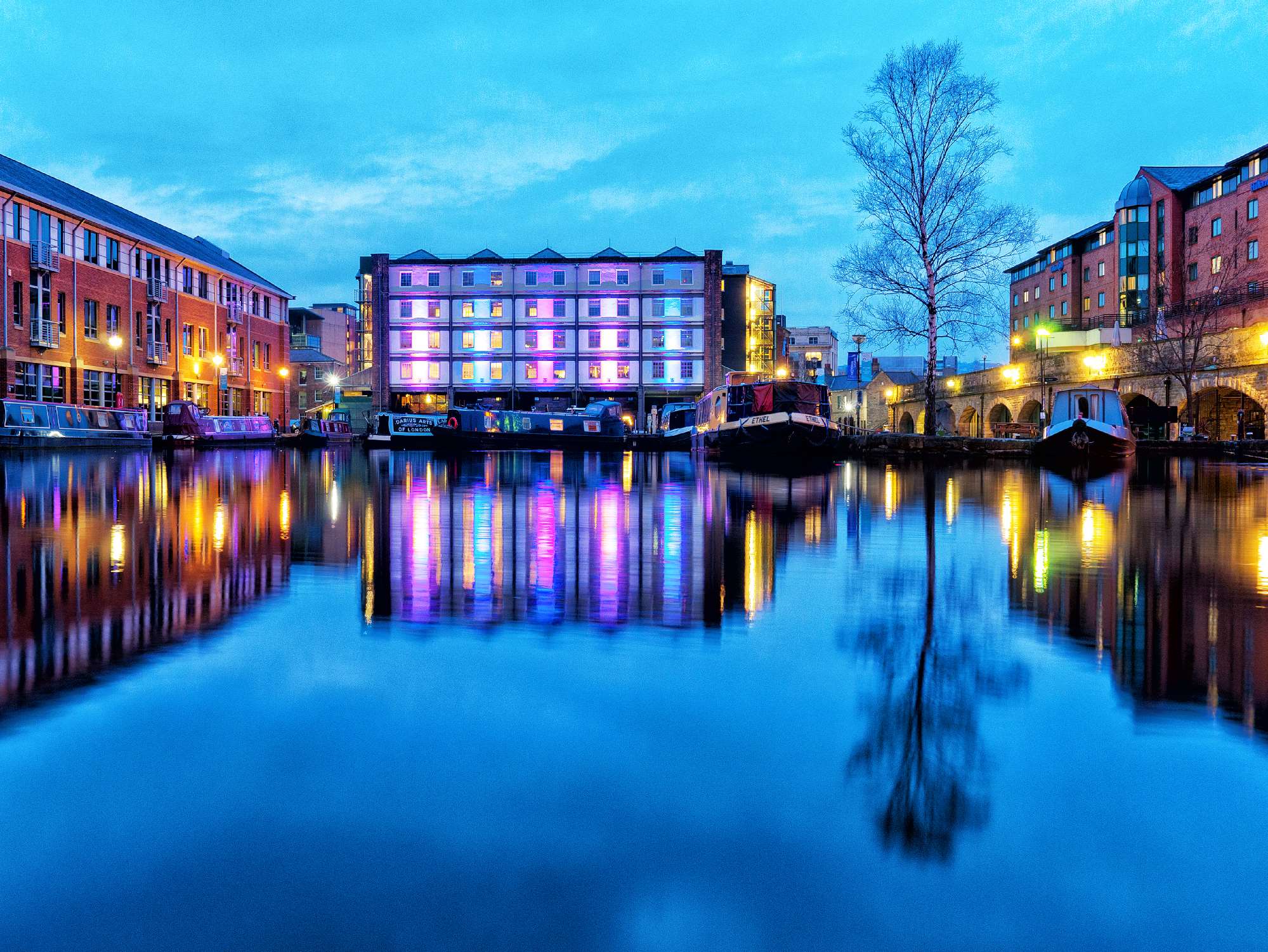 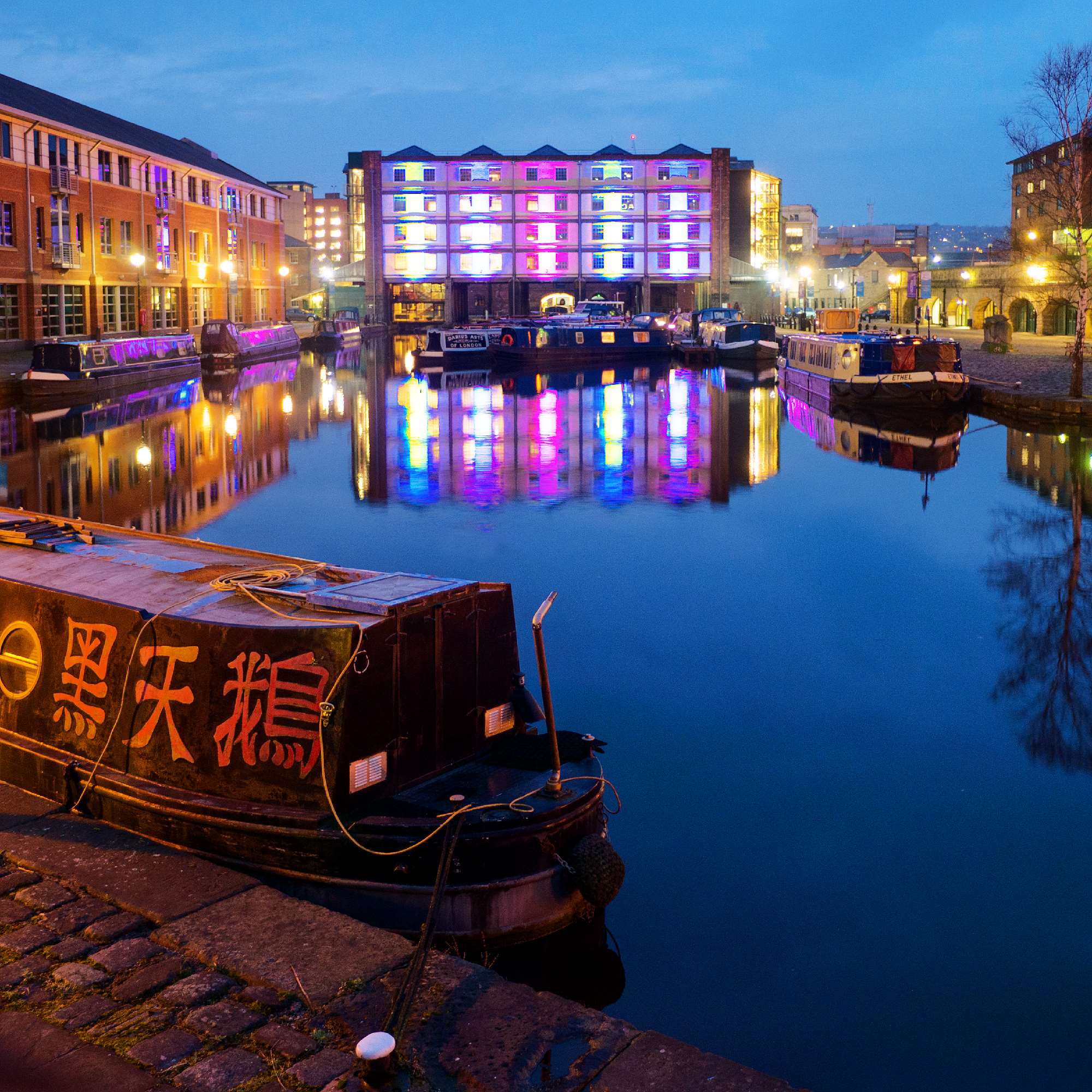 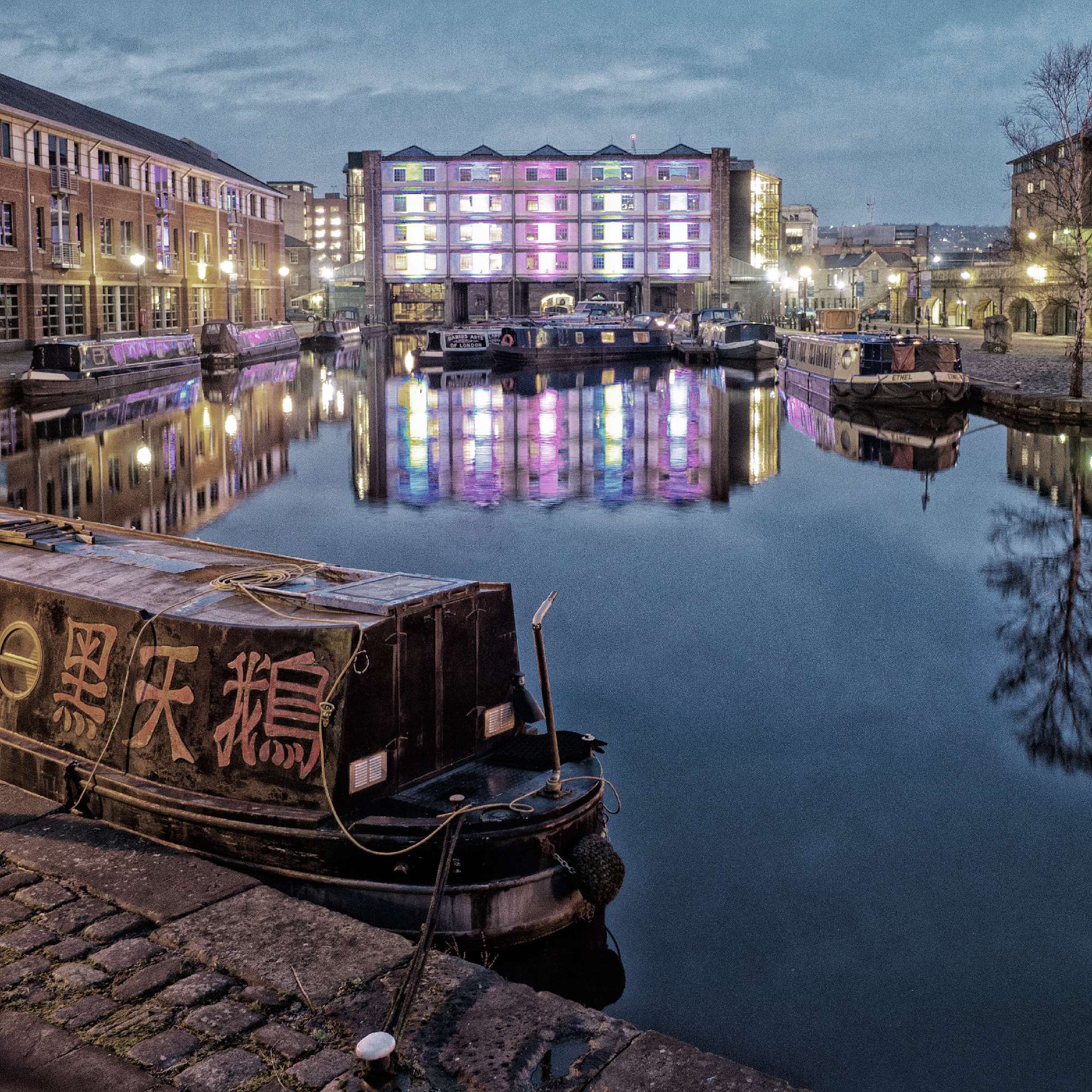 I guess it could be that staying in Victoria Quays in early spring,  there’s few boaters around never mind members of the general public and tourists. We do definitely feel this is a recommended place to visit, we loved every moment.

On our final night, as I was cooking tea, Barry went for a walk around the basin to capture the above images. He was gone for ages. When he left he’d said “I’ll be back.” To which I’d responded jokingly “I hope so!“. Forty minutes later I was doing my best not to imagine something dreadful had happened, confident he’d be fine, just got waylaid. I carried on eating my tea, attempting nonchalance … Arriving back eventually, sheepishly, he said he’d been cajoled by the bar owner to come and have a drink, as he hadn’t seen him in his bar yet. We hadn’t even realised it was a bar! There’s so little signage outside to suggest what it is or who it’s open to. He (reluctantly he told me!) agreed to  half pint (almost unknown for Barry!) as he knew I’d be getting anxious. Again, what a shame, if we’d known about this place before we’d definitely have given him some custom. They’ve only recently opened, so fingers crossed their business flourishes in future.

It’s like going on holiday for a week and you only discover things on the last day!

A quick catch-up of our meanderings

Last Sunday, 25th March, we left Sheffield accompanied by Fred and Sara, early in the morning (thanks to the CRT lock keeper who insisted we be there by 0930hrs on the dot, even when the clocks went forward!) and descended the Tinsley Flight. We moored in Rotherham that night – and were happily surprised by a number of delights there when we walked around on Monday. I’m looking forward to seeing Barry’s photos and getting them published – hopefully in a couple of days if we can organise it between us despite the distance!

I left Barry on Wednesday, from Doncaster, and after a complex public transport journey am at mum’s till Monday, then Lisa’s till Saturday 7th April when I’ll rejoin him either at Wakefield or Leeds.

Meanwhile, Barry phoned last night to say he’d arrived in Goole yesterday with Fred on board as First Mate once again! Hurrah! He’s made it. It’s been a bit of a mission for him, and, despite not being able to do it via the Tidal Trent, he’s taken the long way round. Brilliant news I’m sure you’ll agree.

3 thoughts on “Views of Sheffield and Victoria Quays”