In February we were contacted by Valiant, via this blog, enquiring as to whether we’d be interested in reviewing a brand new product on board Areandare. We’d previously used a stove-top fan, but clumsily knocked if off one time too many! Subsequently we chose not to replace it; they’re not cheap items and we imagined the same thing was bound to happen. However, we’d sorely missed the positive action of a fan circulating warm air through the boat.

At almost the same time as the email arrived in my in-box, Barry had been gazing ruefully at our stove, seriously contemplating the potential design of a fan that could be placed ON the Flue Pipe. He’d no idea one had recently been invented and was about to be launched – and offered to us to test! Remarkable synchronicity …

Of course we had absolutely no hesitation in agreeing to test and review the Remora Flue Pipe Fan. You can check out the product’s full description and key features by visiting their website.

Our experience of the Flue Pipe Fan

In the autumn of 2014 we consciously chose to have only a small (3.5kw), multi-fuel stove fitted. The Valiant specifications of their Flue Pipe Fan state it fits “99% of flue pipes” of 4 to 7 inches diameter – we’d confirmed ours was suitable (hurrah!).

The instructions provided on receipt  of the product, were to place the fan on the flue pipe when said pipe was cold – suggesting a minimum of 20cm above the stove-top, and maximum of 40cm.  The rationale for the lower measurement is to reduce the chance of the fan knocking on items placed on the stove-top. As we don’t have anything placed there, attaching it lower, if necessary, wasn’t an issue.

We’ve tried siting it at various points, and eventually discovered the lower it is to the stove-top the better the performance (actually only 14cm from plate top to the centre of the fan blades, or 23cm to the top of the blades) – for OUR stove. When it’s hot enough the fan works brilliantly, moving the warm air effectively throughout the boat. Our challenge has been that when the stove gets hot, we tend to then reduce the heat produced by closing the vents on the fire to reduce the amount of air entry and subsequently the burn time of the coal inside. When we do that, we’ve found the fan stops working.

In response to this, Valiant were most helpful, and sent us a Flue Pipe Thermometer to test the temperature of our flue pipe in order to ascertain its ‘sweet spot’ for the fan. What we’ve found is our stove, probably due to its size, rarely reaches the red ‘Optimum Burn’ section (see below). We’re aware many boaters prefer far larger stoves – and it’s likely for them the Flue Pipe Fan would spin more frequently. 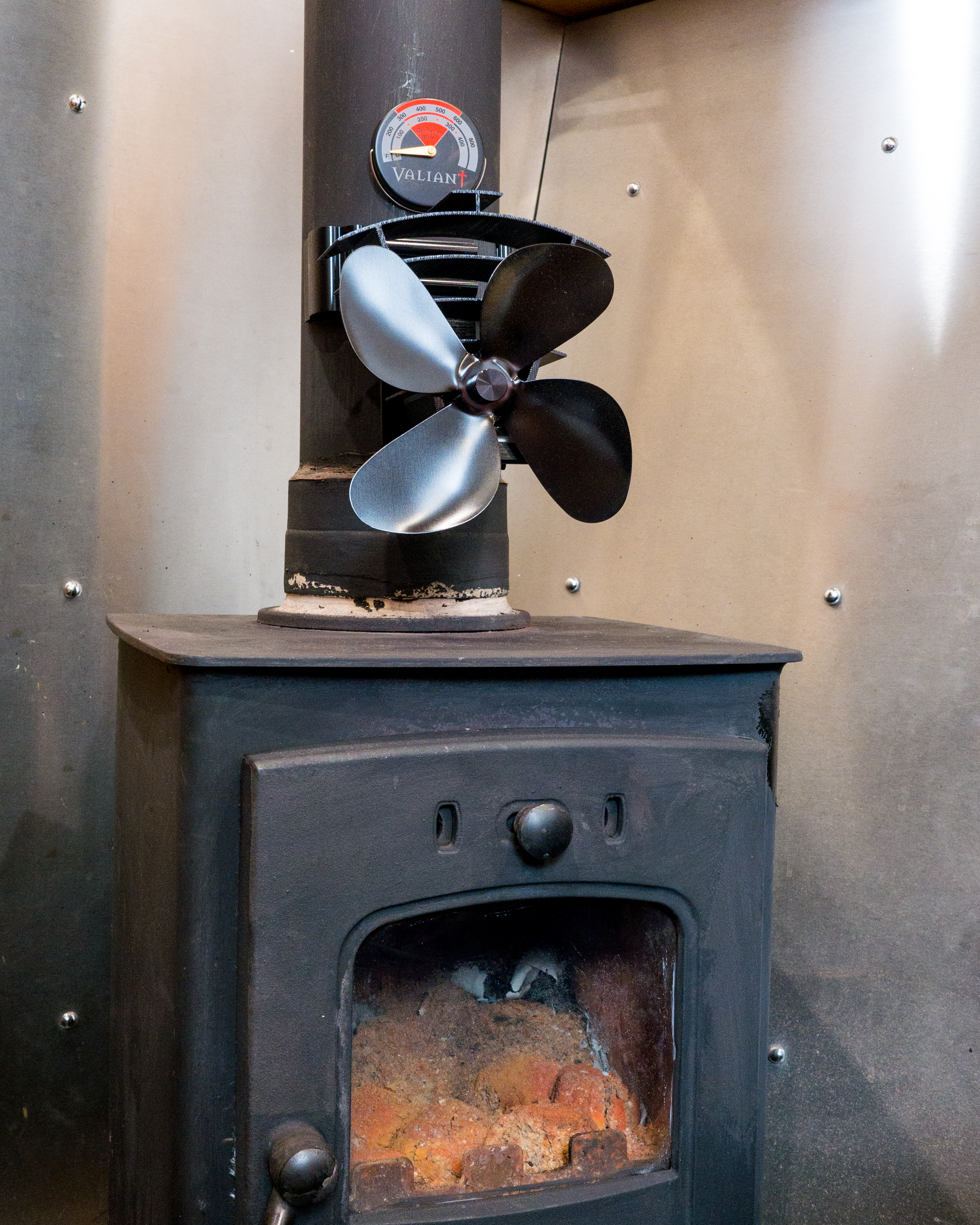 The fan and thermometer in position – showing a cold fire (in need of blacking but it’s been working non-stop over winter!), with remnants of the not-so-great ‘red’ looking coal bought from a large chain store in Lincoln, rather than our usual Boatyard, as sadly we haven’t found any recently. This could also have affected the fan’s performance …

If we’ve felt the fire IS warm enough for the fan to fire up, but it hasn’t quite sprang into action, a gentle nudge on the blade/s has usually set them happily in motion.

The fact that the fan doesn’t continuously whirl away wildly isn’t, for us, an issue. It’s merely a minor inconvenience compared to the benefits of the Flue Pipe Fan, and having experienced this one we’d definitely not choose to return to a stove-top version.

I guess if we were giving marks out of five we’d want to give 4.5 – merely a 0.5 mark down because of it not working 100% of the time our stove is lit. Otherwise it’s exactly what Barry was imagining conjuring up! It’s easy to attach, sits securely on the flue pipe, and when it’s spinning it circulates the warm air most efficiently.

The cost of £110 from Valiant may seem exorbitant to some, but for us, considering we so easily damaged the sensitive mechanisms in the stove-top one (which generally sell between £55 to £90), it would be cost-effective. Our stove is right by the front door, which is obviously used frequently – similar to many narrowboats. So this fan feels far more secure and less likely to be accidentally damaged.

A frequent concern and question to live-aboard boaters is “But surely it’s cold in the winter?”. Well yes, if you didn’t have a stove to keep you warm. And a fan!

Thank you to Valiant for providing the opportunity to test and review this impressive fan.