Every now and then it happens. Something one or both of us would love to experience coincides with us there.

Today was one of those magical times.

We’d visited Lincoln Castle and Cathedral yesterday – enjoying them immensely. At the Cathedral we saw a flyer for a ‘Rick Wakeman Live Portraits’ concert this evening. Really? THE Rick Wakeman? Performing on our last night in Lincoln?

This morning we returned to the Cathedral as we had only a couple of hours last night (we even extended it to Evensong to hear the angelic voices of the choir), in order to do a floor tour. And guess what? There he was … 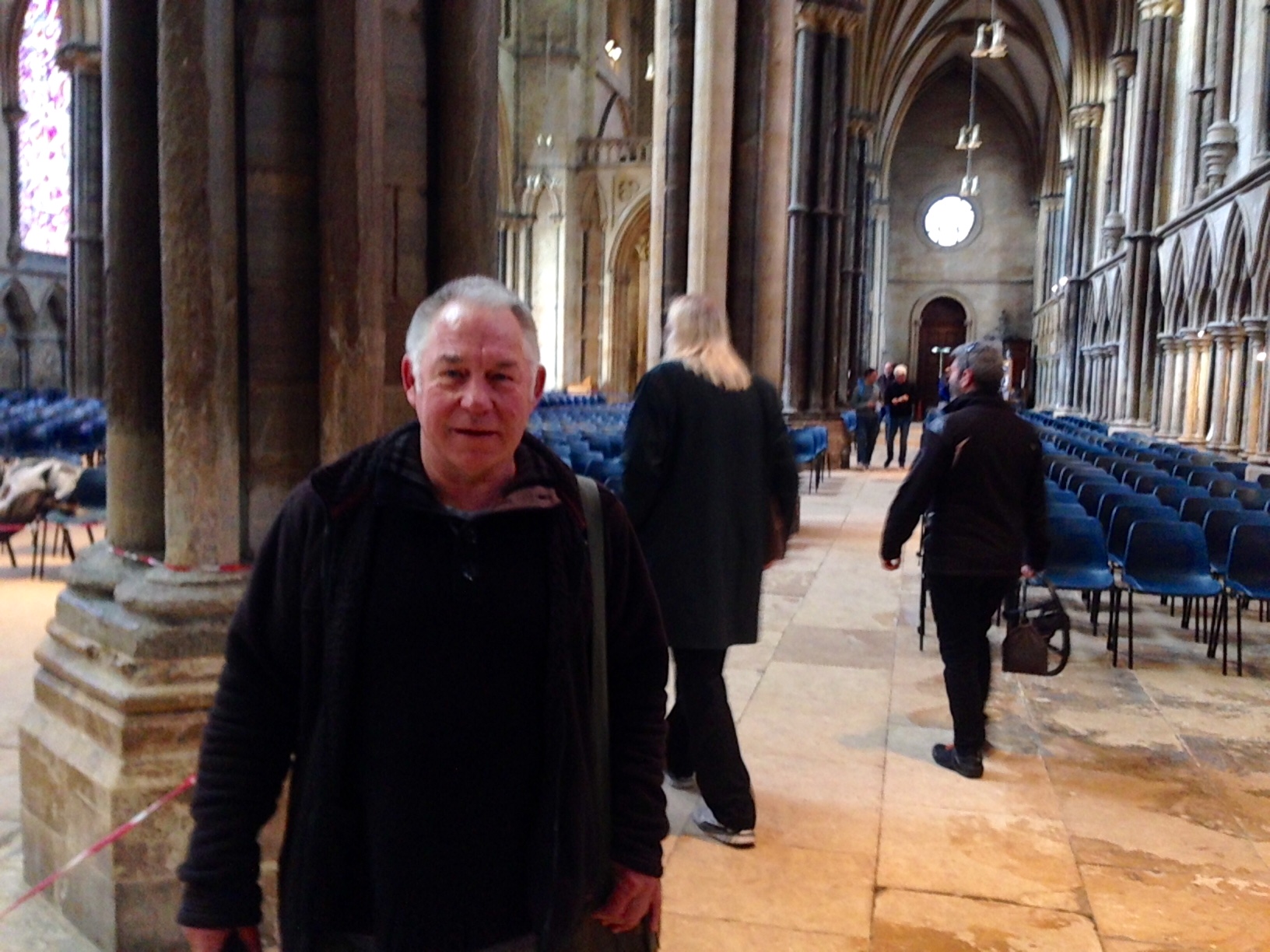 As we walked to where the piano was set up, who should come walking towards us but Mr Wakeman himself

He smiled  as he passed us, and said a cheery  ‘Hello‘ – you could almost feel the thrill emanating from Barry. 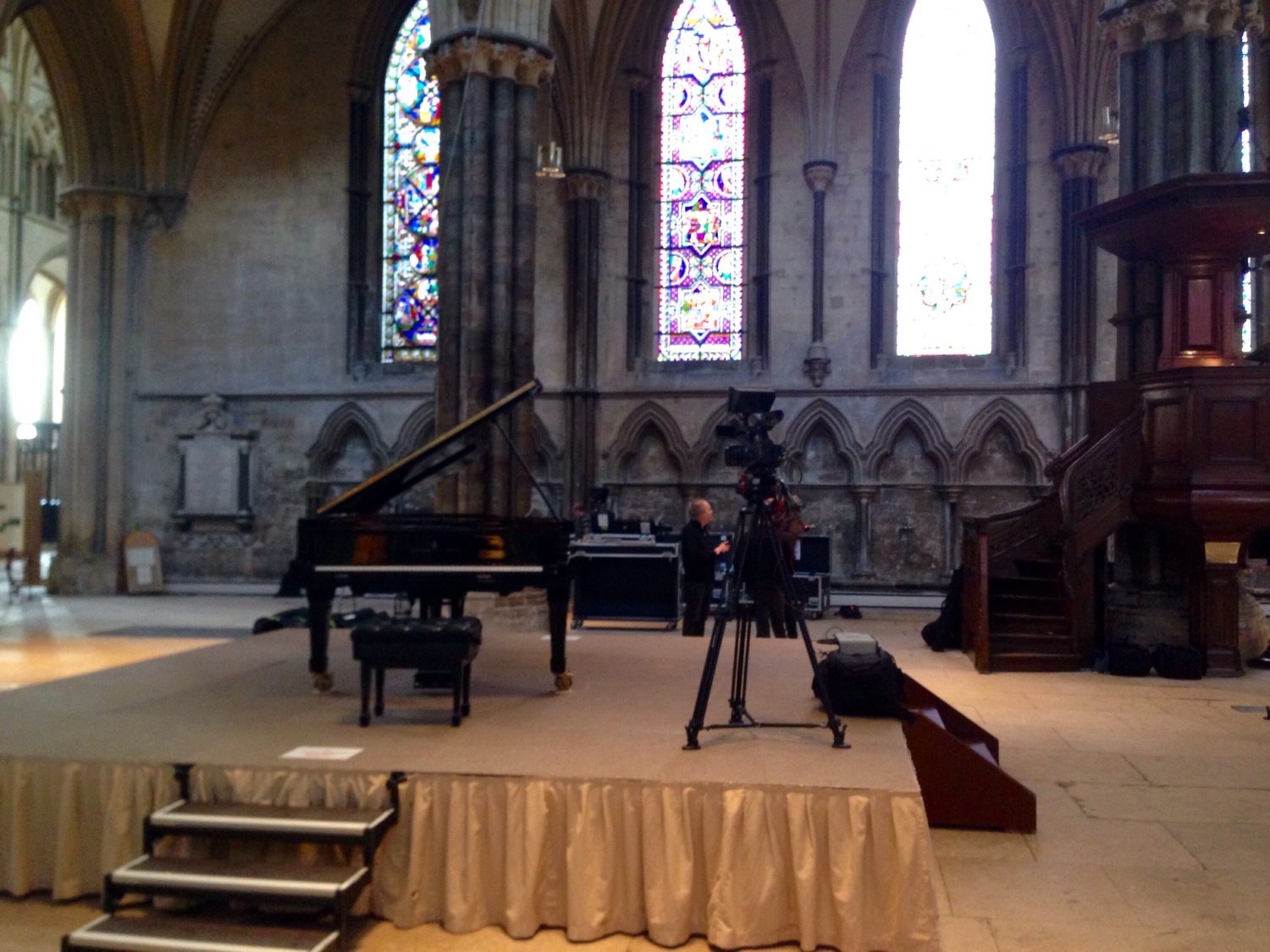 Setting up the equipment for the live show to be recorded 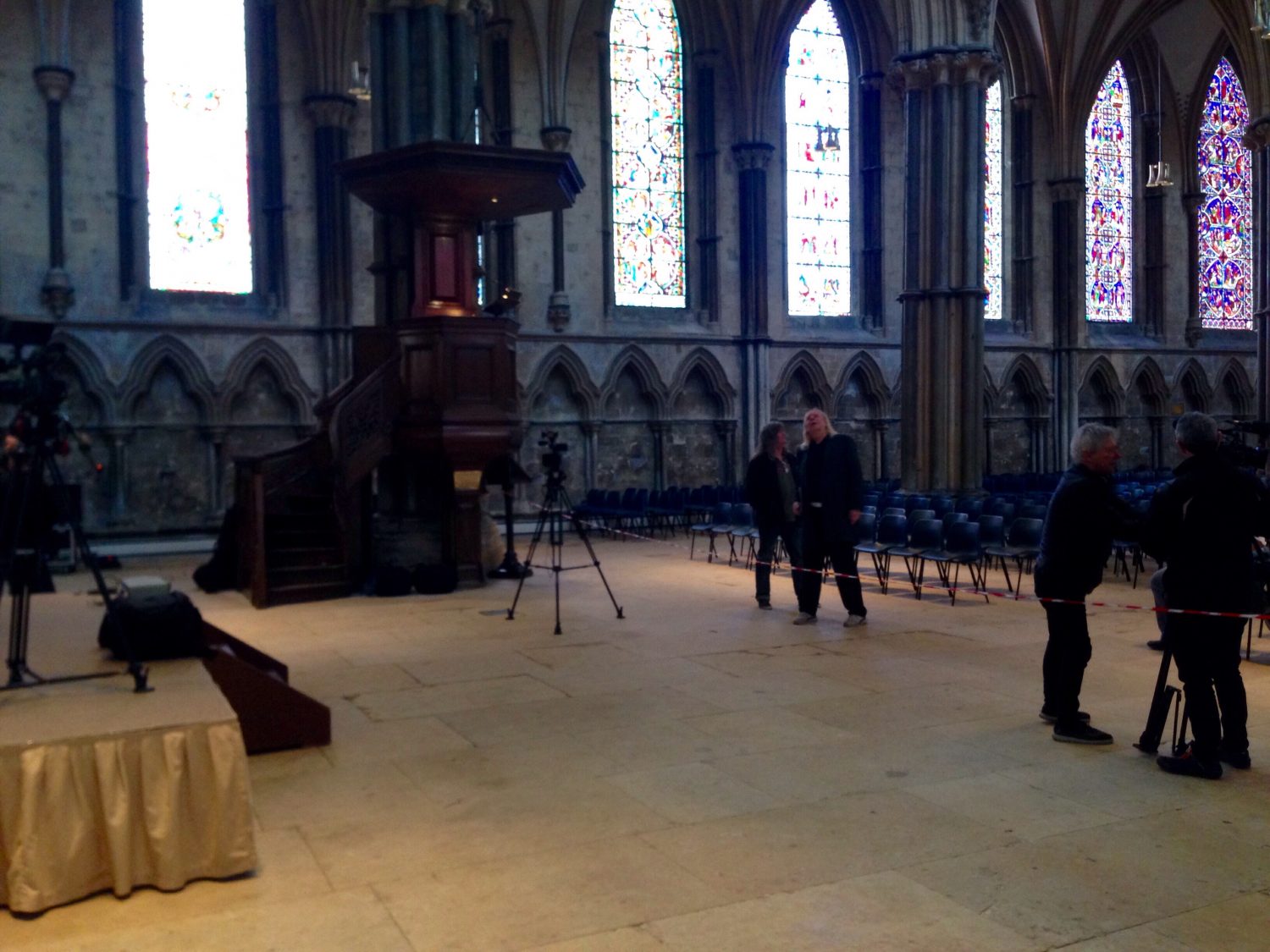 Rick discussing finer details with some of his crew 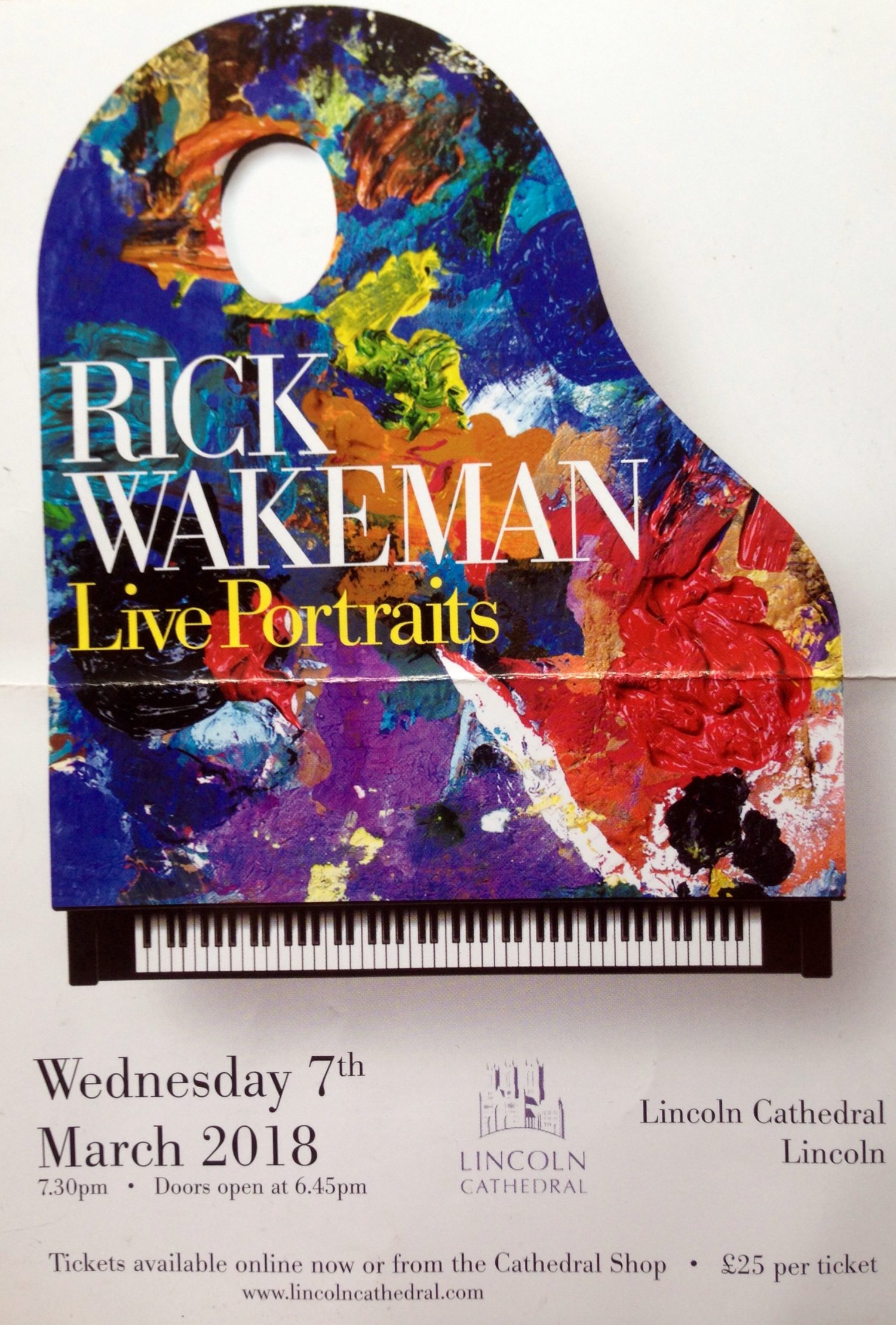 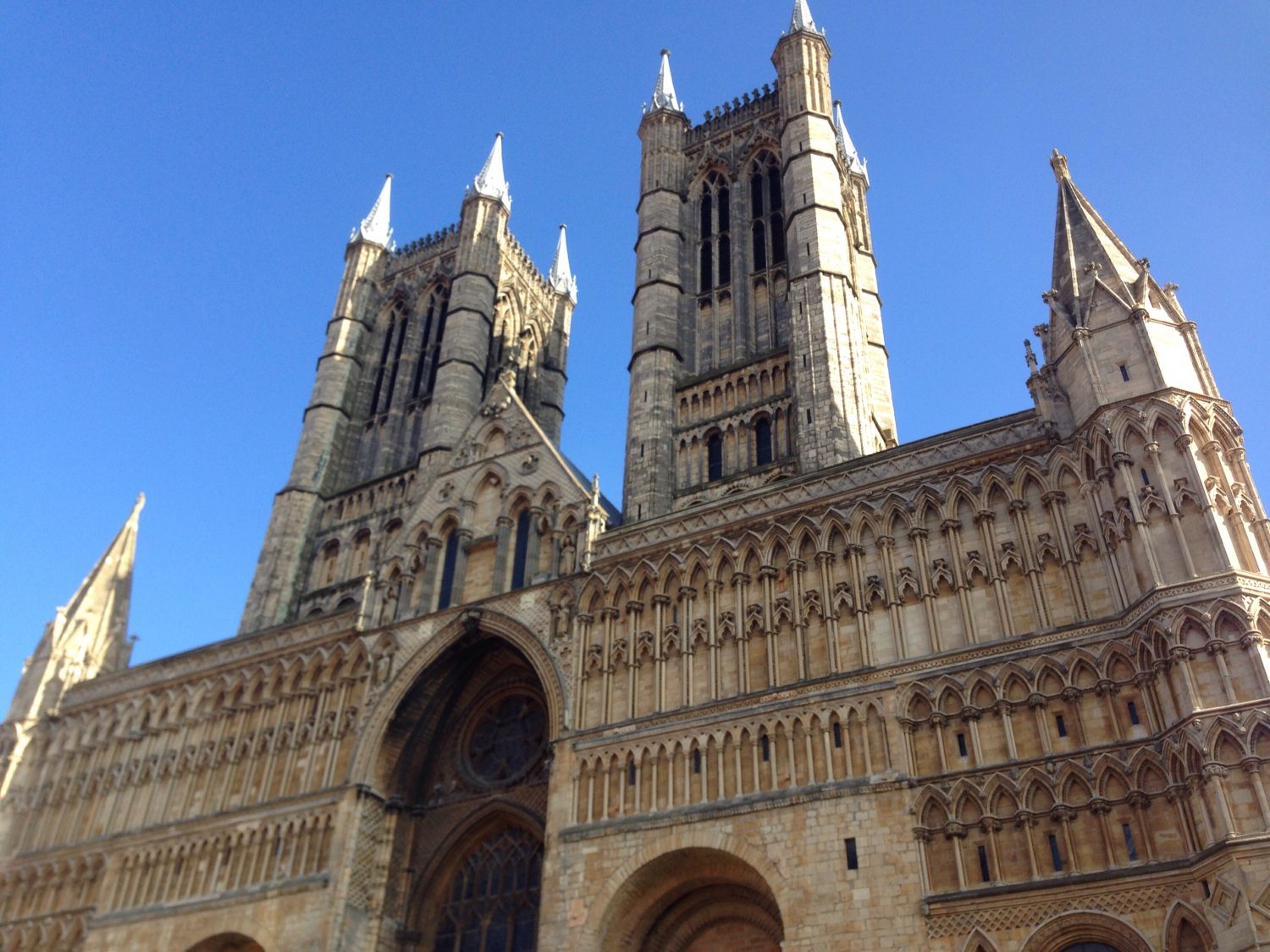 It took a bit of persuasion to get Barry to realise this was something to be snapped up. Thankfully there were some tickets left, though only for the side aisles with restricted view. The Nave seats were unsurprisingly all sold out.

Researching further back on the boat,  we discovered:

“Keyboard legend Rick Wakeman will be recording a live version of his critically acclaimed album “Piano Portraits” at Lincoln Cathedral on Wednesday 7 March 2018. “Live Portraits” be released on CD/DVD later in the year.

Speaking of the concert, Rick said:

“Last year I released the studio album Piano Portraits which was really well received and went Top 10 in the UK for several weeks. Over the past year I have been touring “Live Portraits” to sell out audiences, so as a lasting record I have decided to film and record a very special performance of “Live Portraits” at Lincoln Cathedral on 7th March 2018.

The concert will be based on many of the tracks from the Piano Portraits album plus many additional pieces, all embellished as can only be achieved in a staged live setting.””

What a special memory this will be. Awesome.

Give us a couple of days to recover from our wanderings and the concert, and I’ll post some extremely stunning photographs from our cultural visits around Lincoln – excitedly from Barry’s new camera. They’ll definitely be worth waiting for.

6 thoughts on “In the right place at the right time for a greeting AND an evening with Rick Wakeman!”