You’ll be pleased to know (if you’re ‘friends’ with me on Facebook you’ll probably already be aware), that Areandare, with lots of encouragement from Barry, broke through the ice above Bardney Lock yesterday morning. The other important news is that someone from The Environment Agency arrived just before we left, to take water samples. It’s likely that something as yet unknown killed all those fish – not the extreme temperatures. We’ve asked them to email us with their findings if at all possible.

We’d been informed by a passer-by before moving on, that the river was clear of ice to Lincoln from the lock – it most definitely was NOT! Maybe it’s difficult to see clearly from the walkway …

We totally acknowledge that generally narrowboaters aren’t keen on travelling through frozen water, as it has the undesired outcome of scraping the layer of blacking off the steel hull. I guess like most things in life, it’s a case of weighing up the options and making a decision based on perceived risks and benefits. We decided it was time for a concerted attempt to get closer to essential services if at all possible, once there was a ‘weather-window’ (it rained yesterday morning and the temperature rose a little).

We broke through a number of patches of ice during the approximate 14km trip from Bardney to Lincoln, as well as thick fog for the majority of the time, disturbing some hardy of wildlife as we went. The swans and mallards seemed most content waddling around on the frozen water, seemingly unperturbed by the cold. 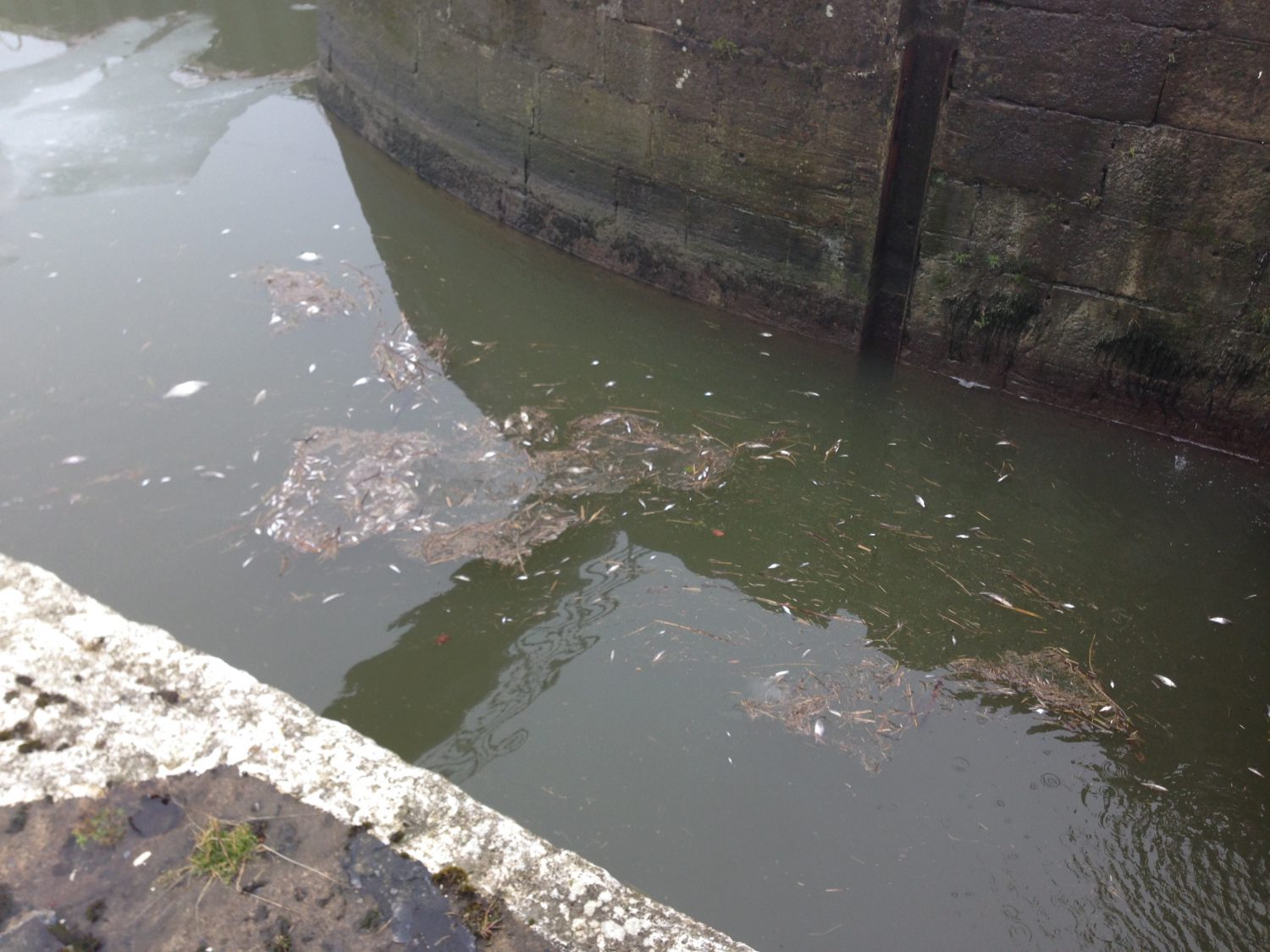 Lots of dead fish below the lock still 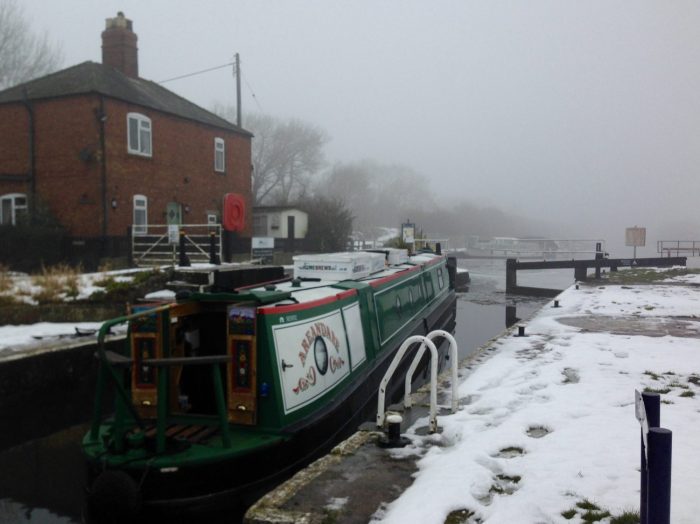 Areandare preparing herself for the battle ahead … 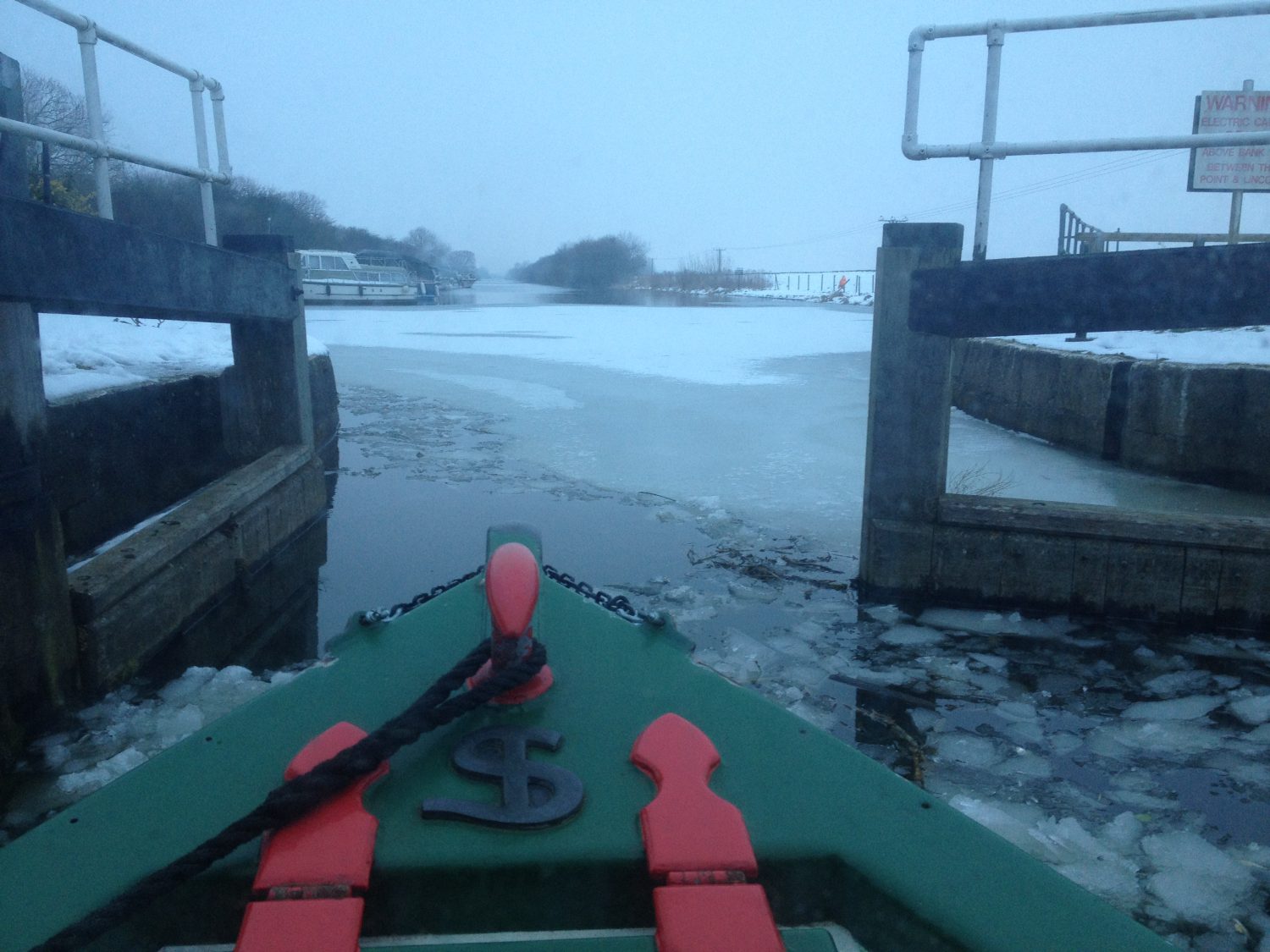 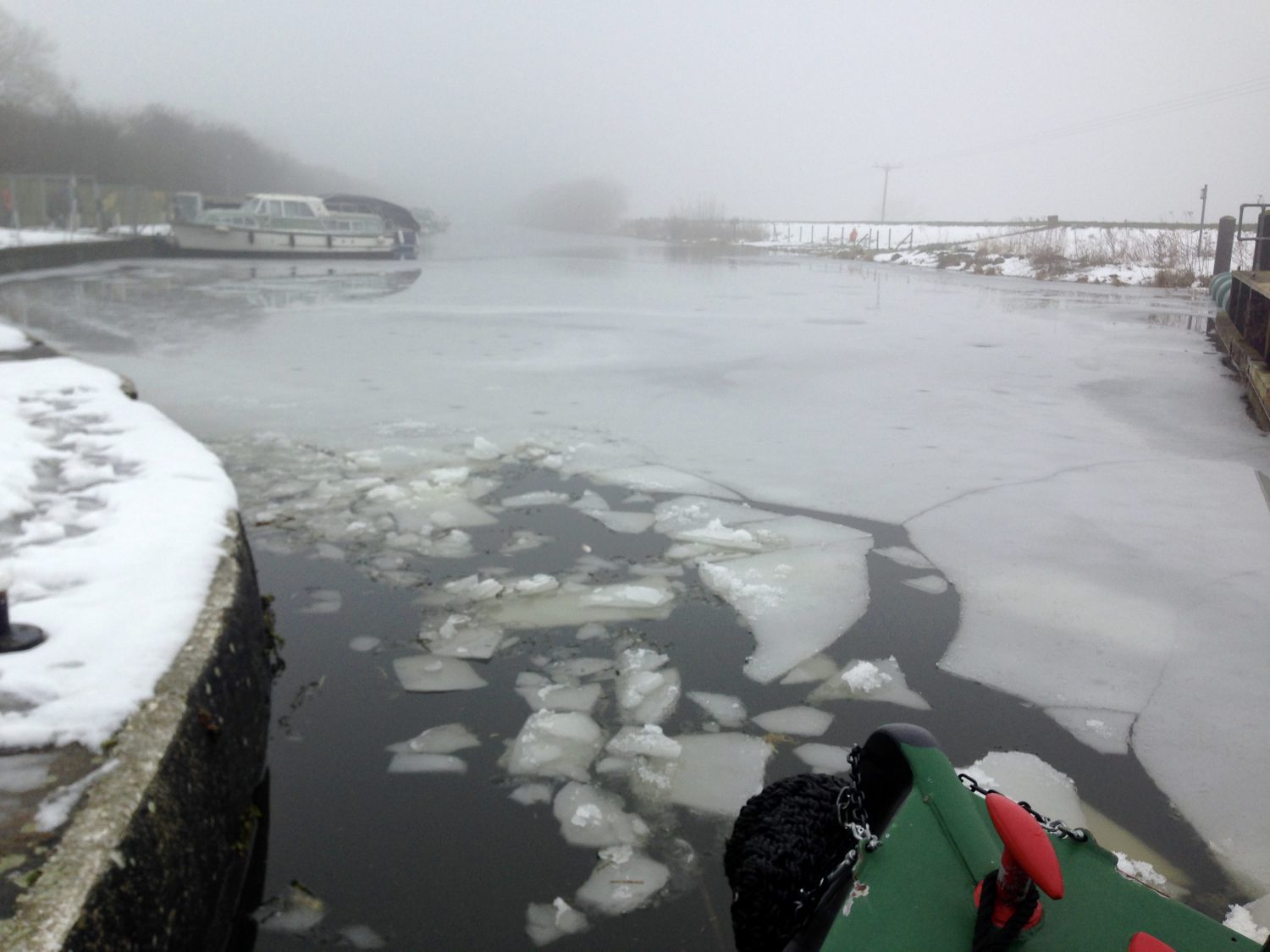 Took a few pushes forward to make any headway 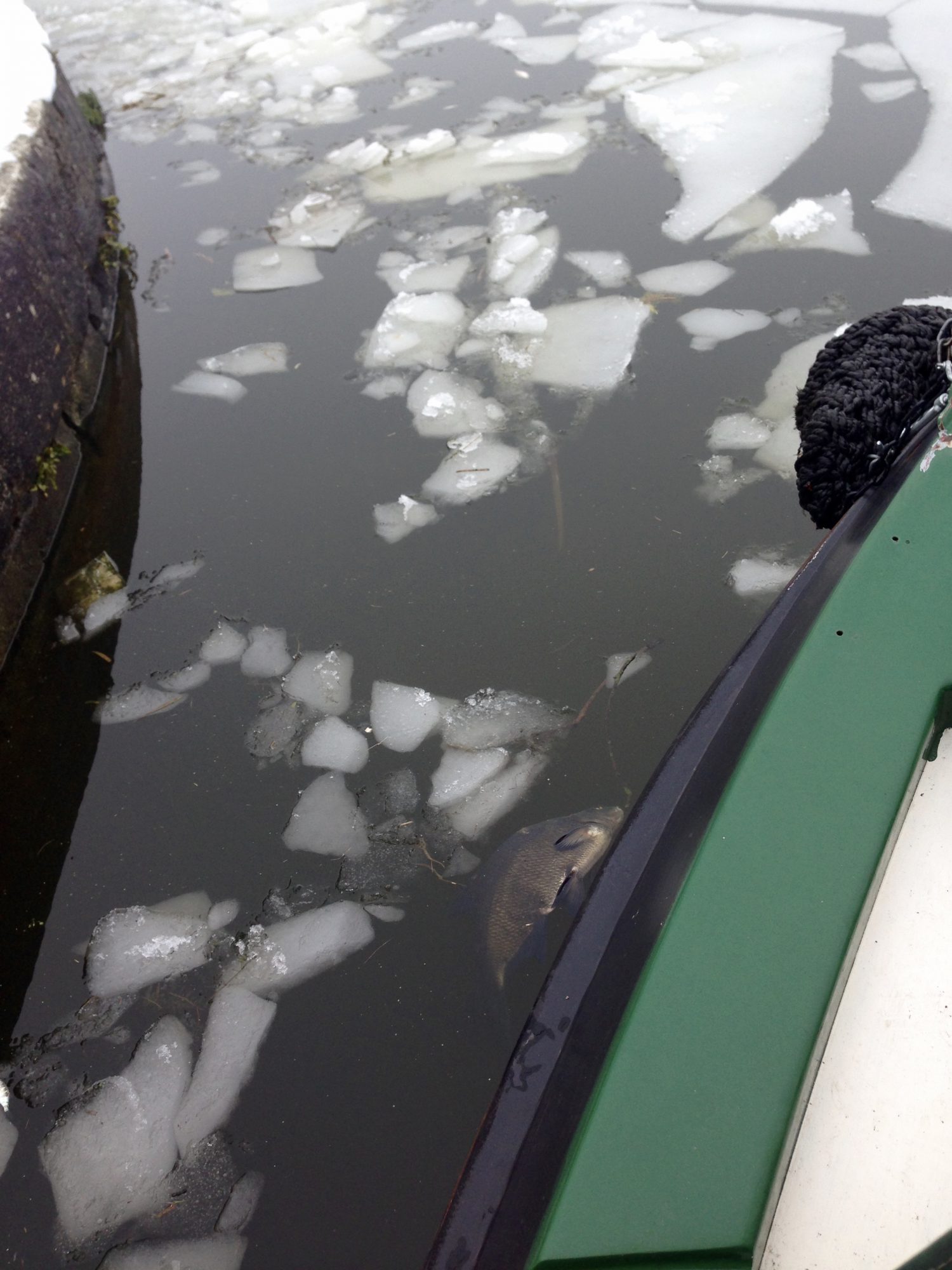 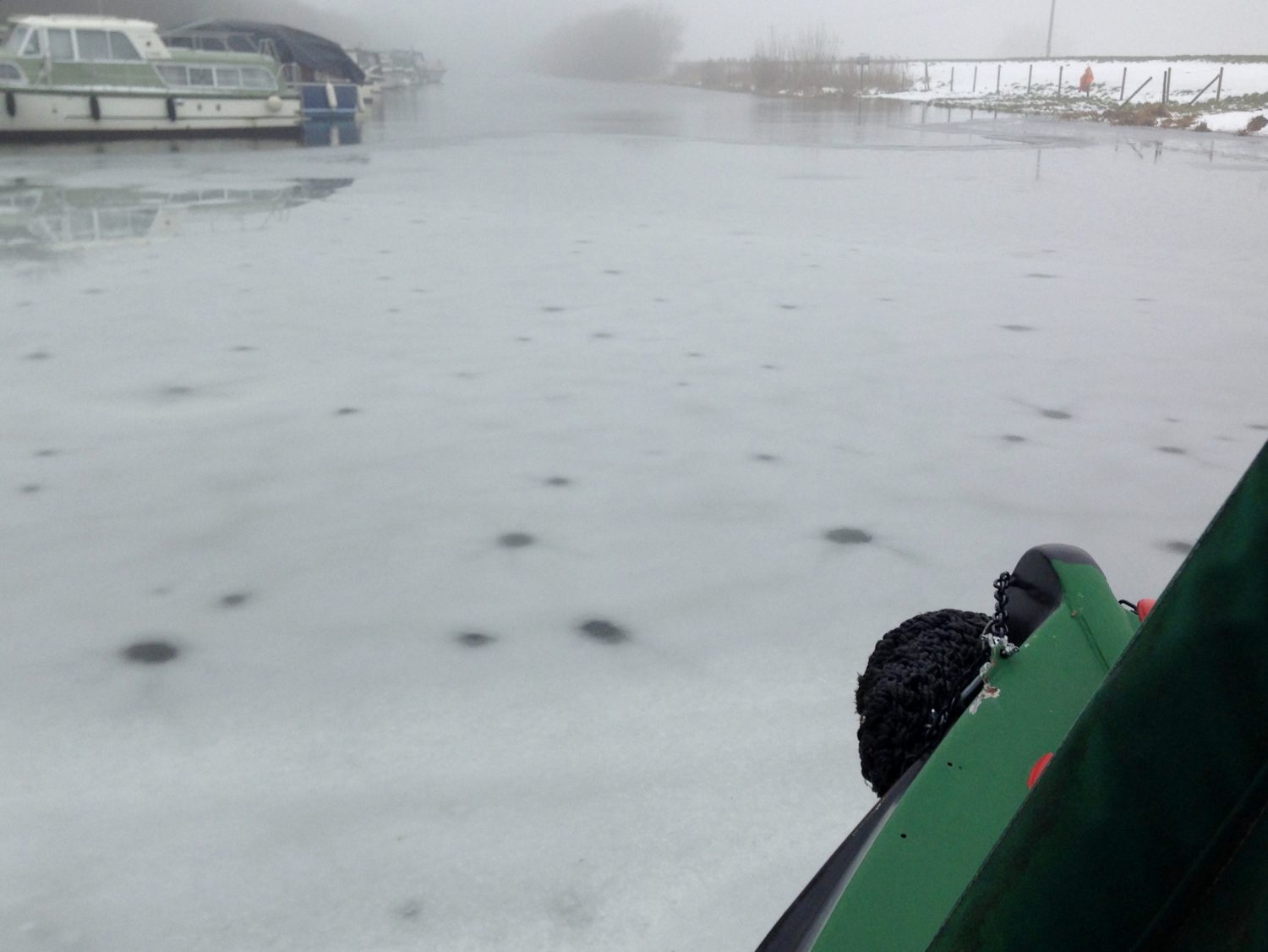 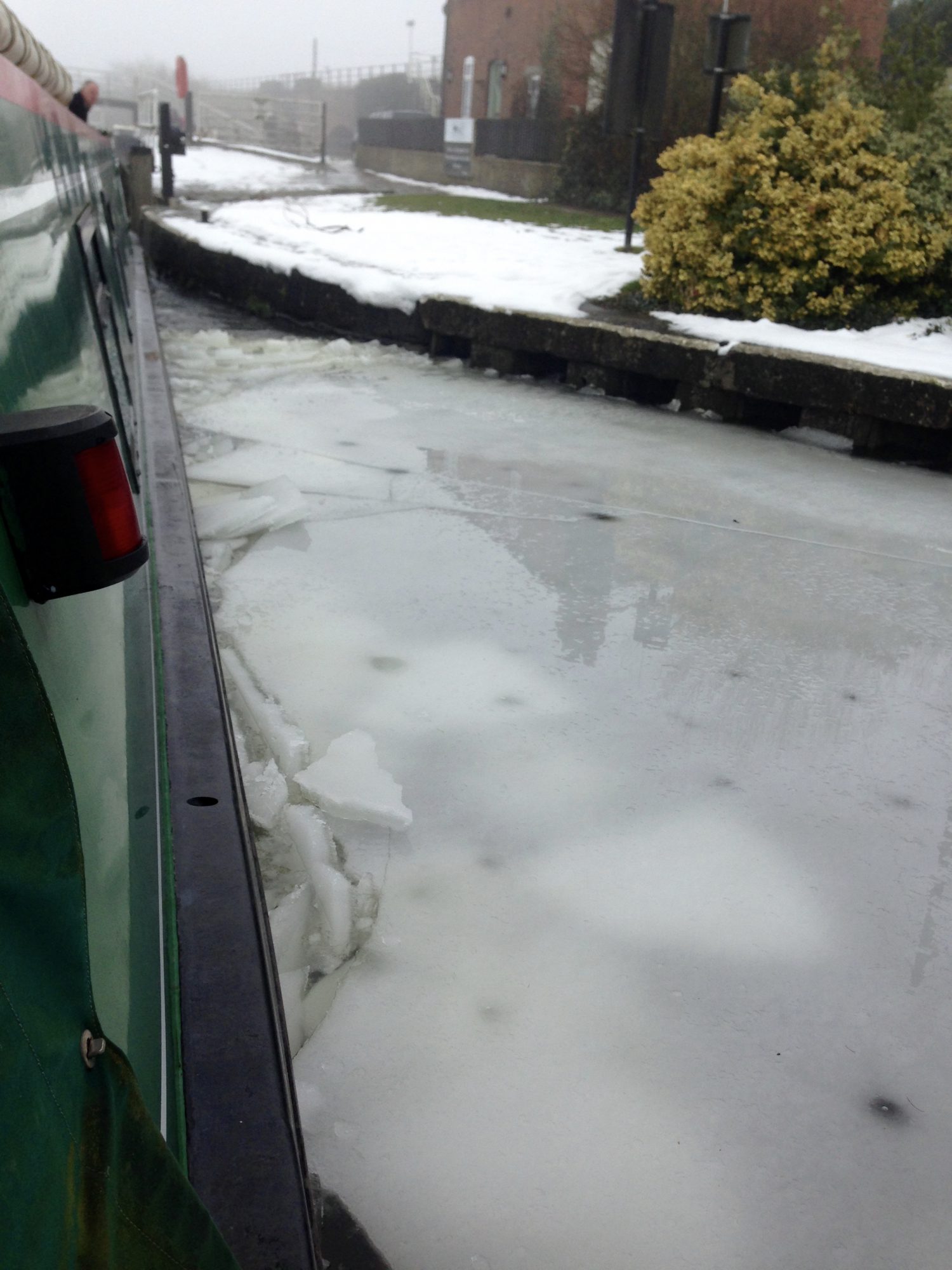 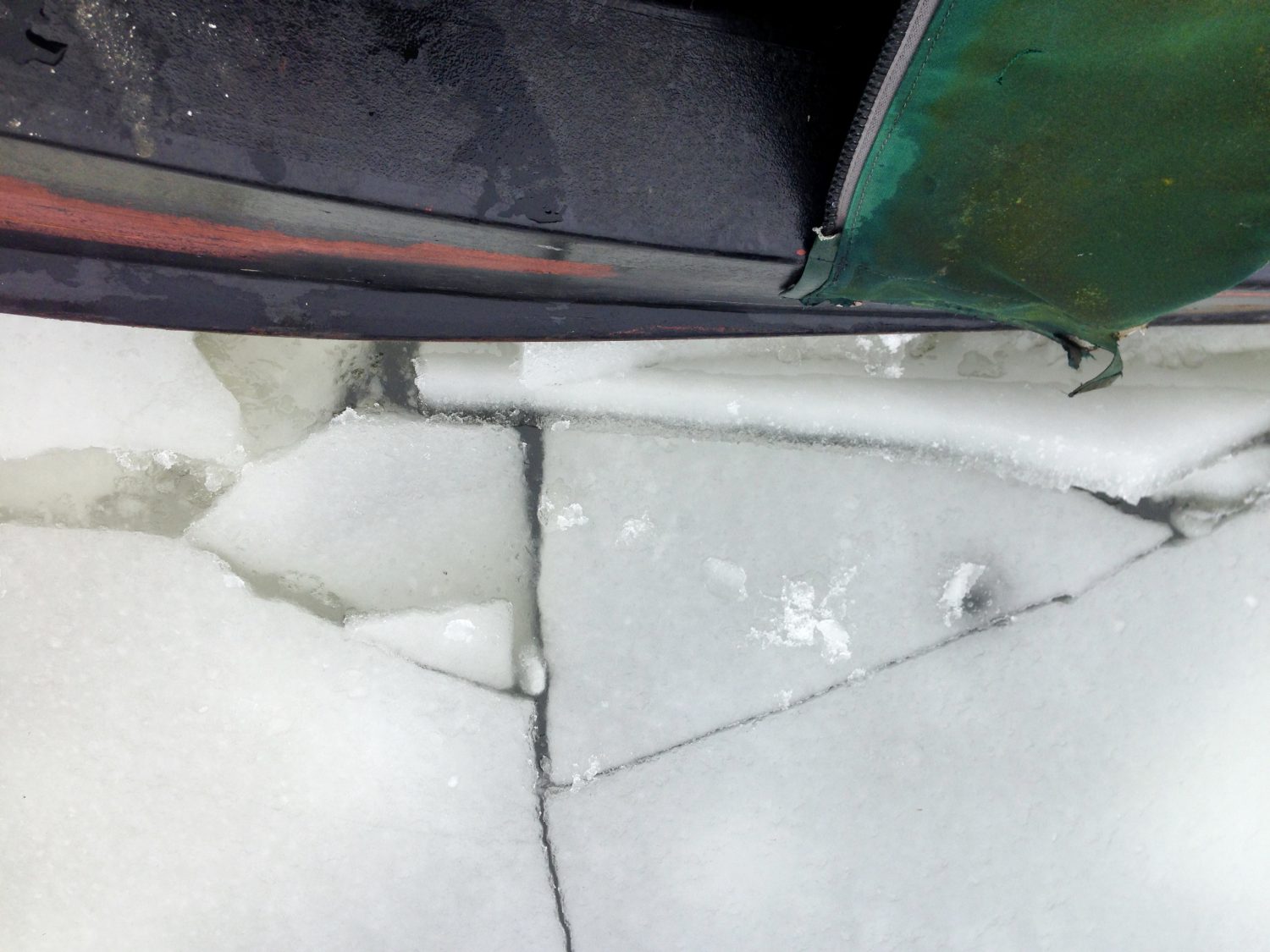 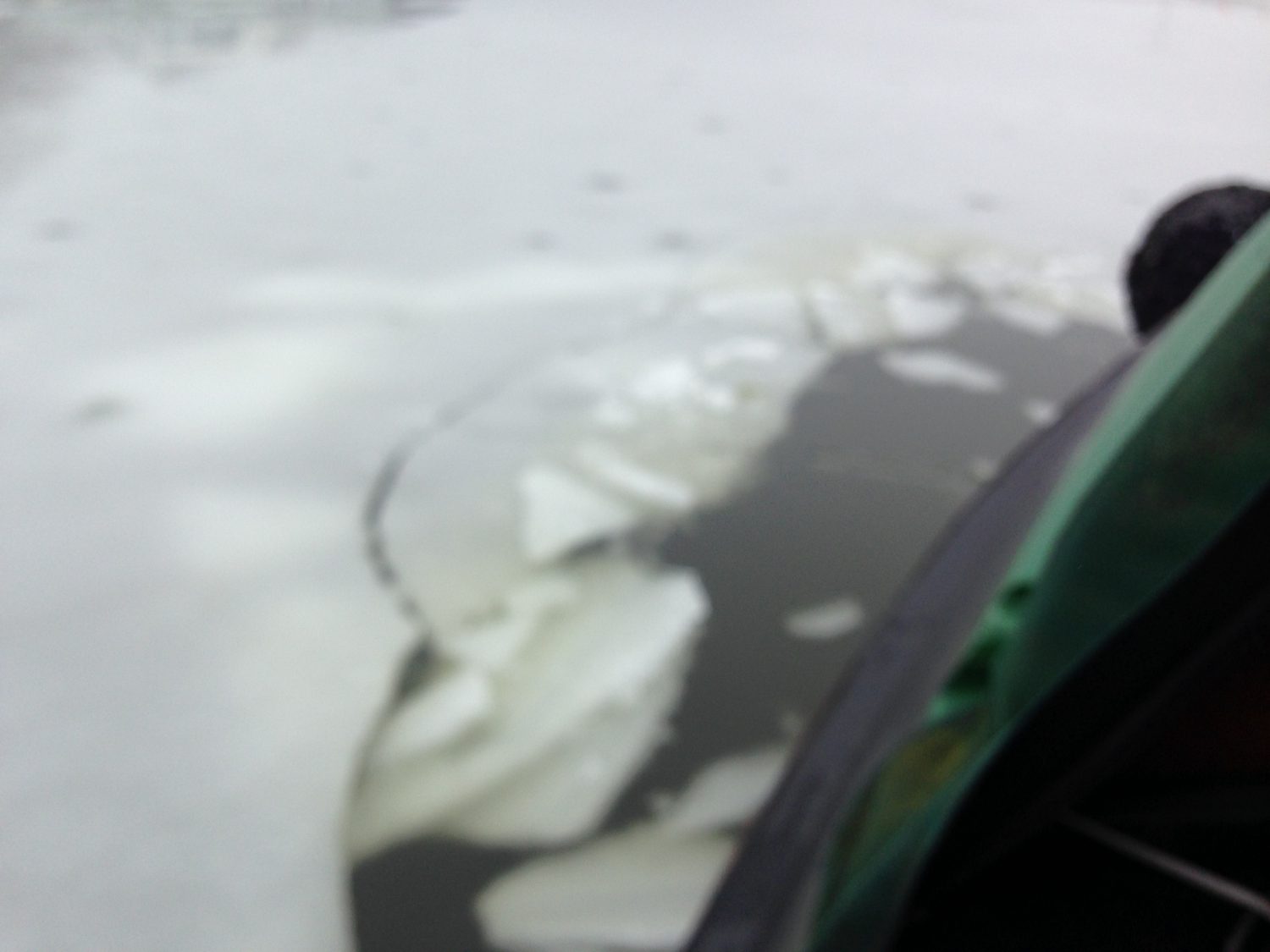 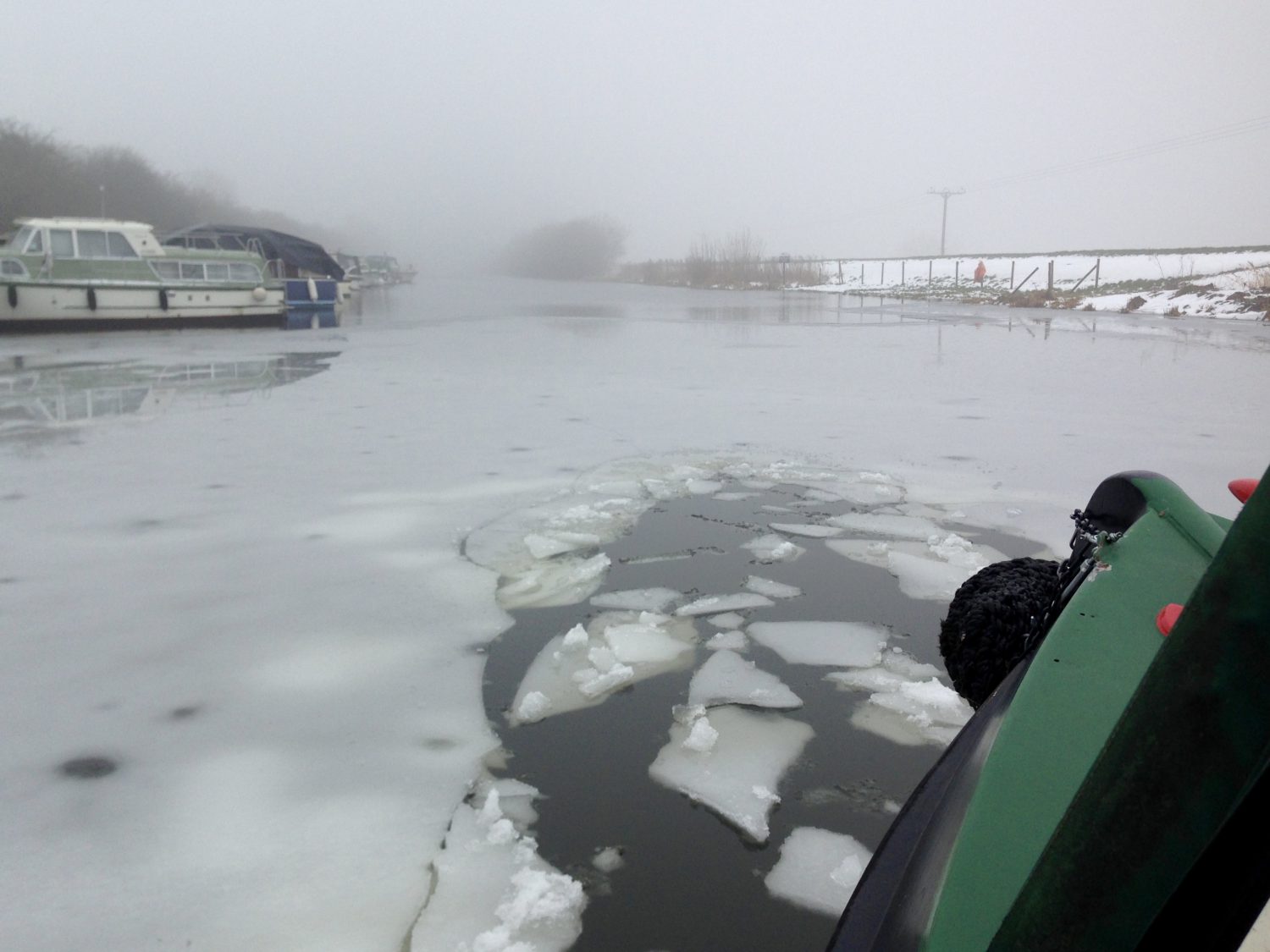 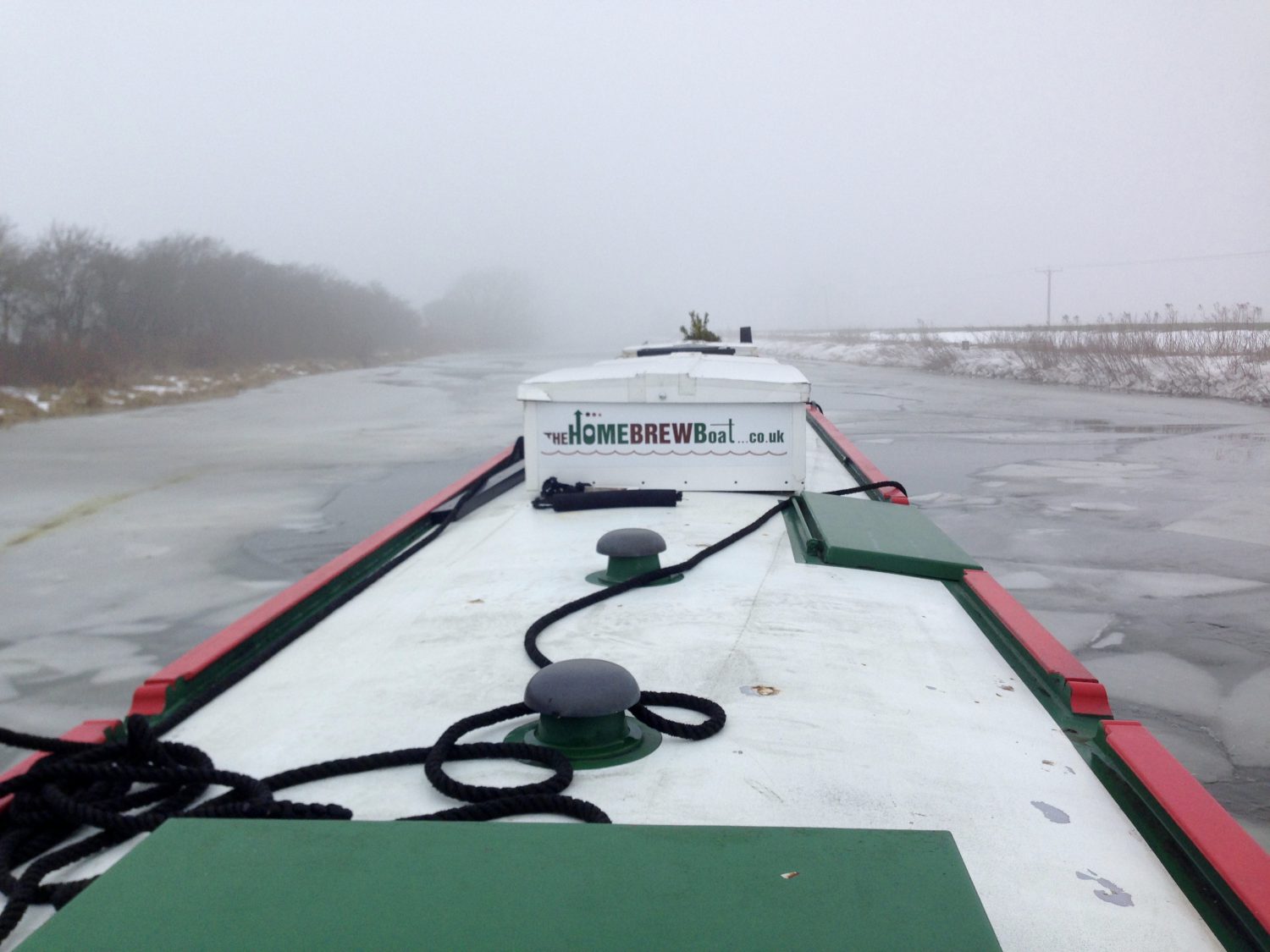 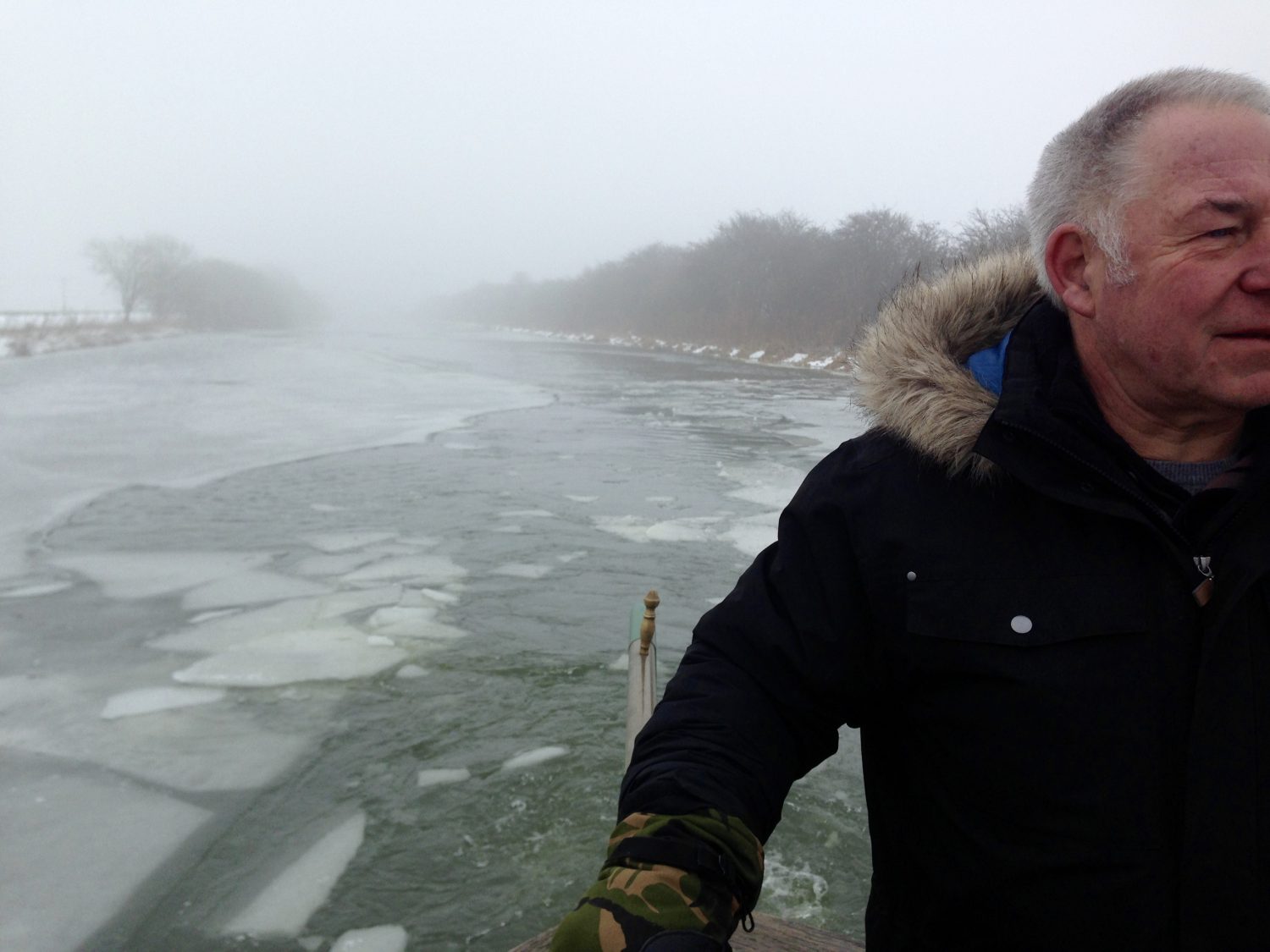 A number of patches along the way to negotiate 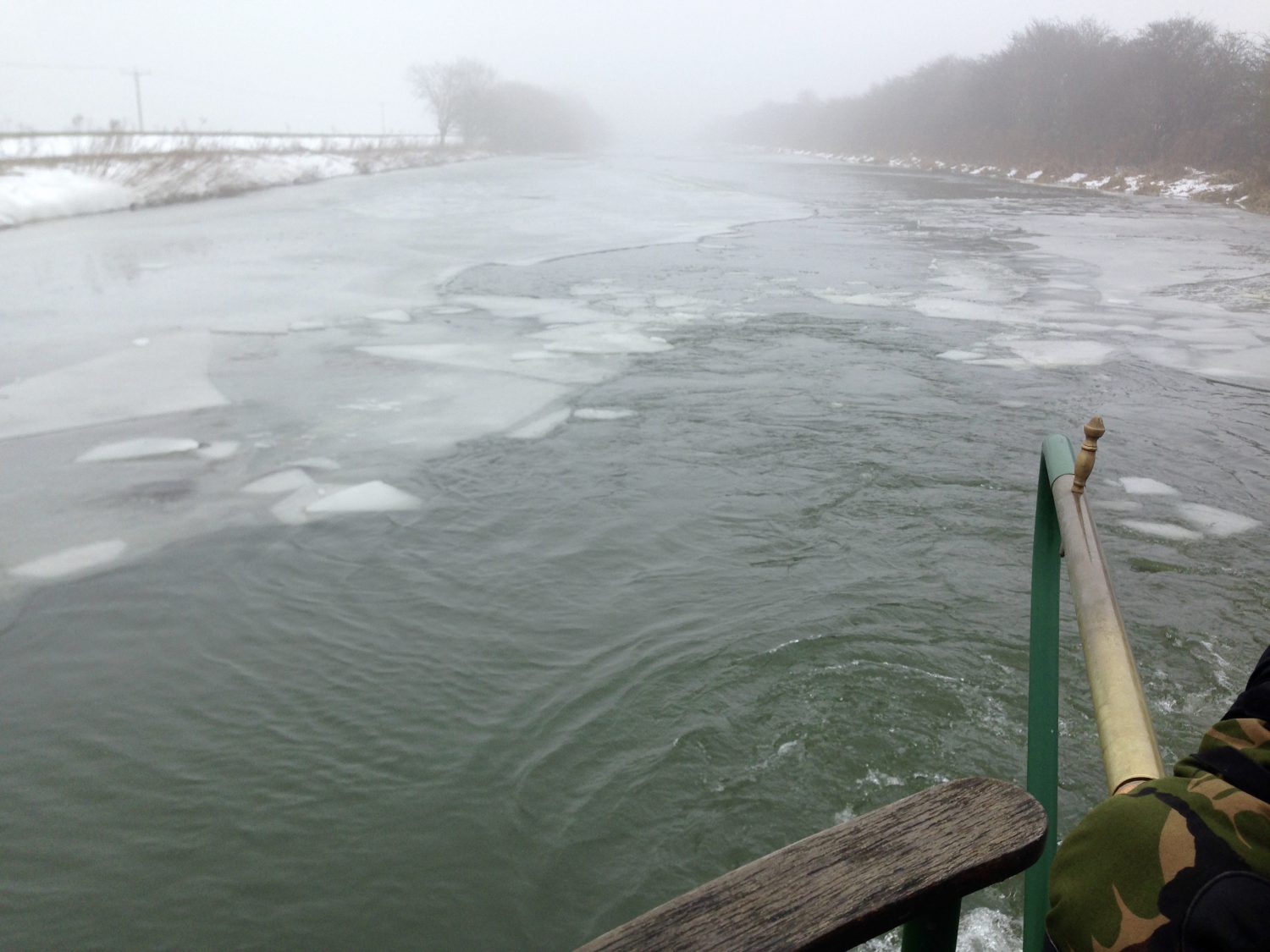 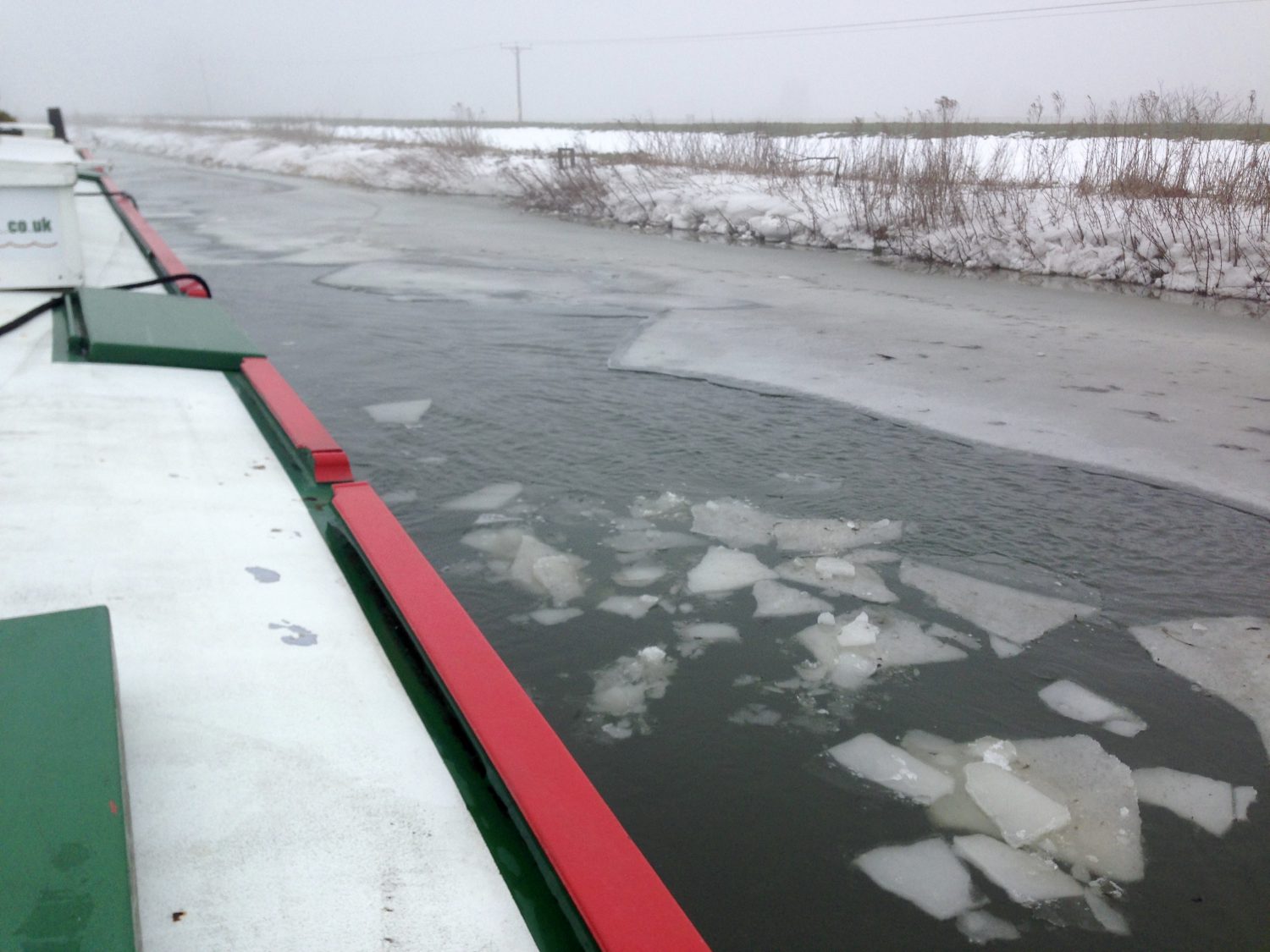 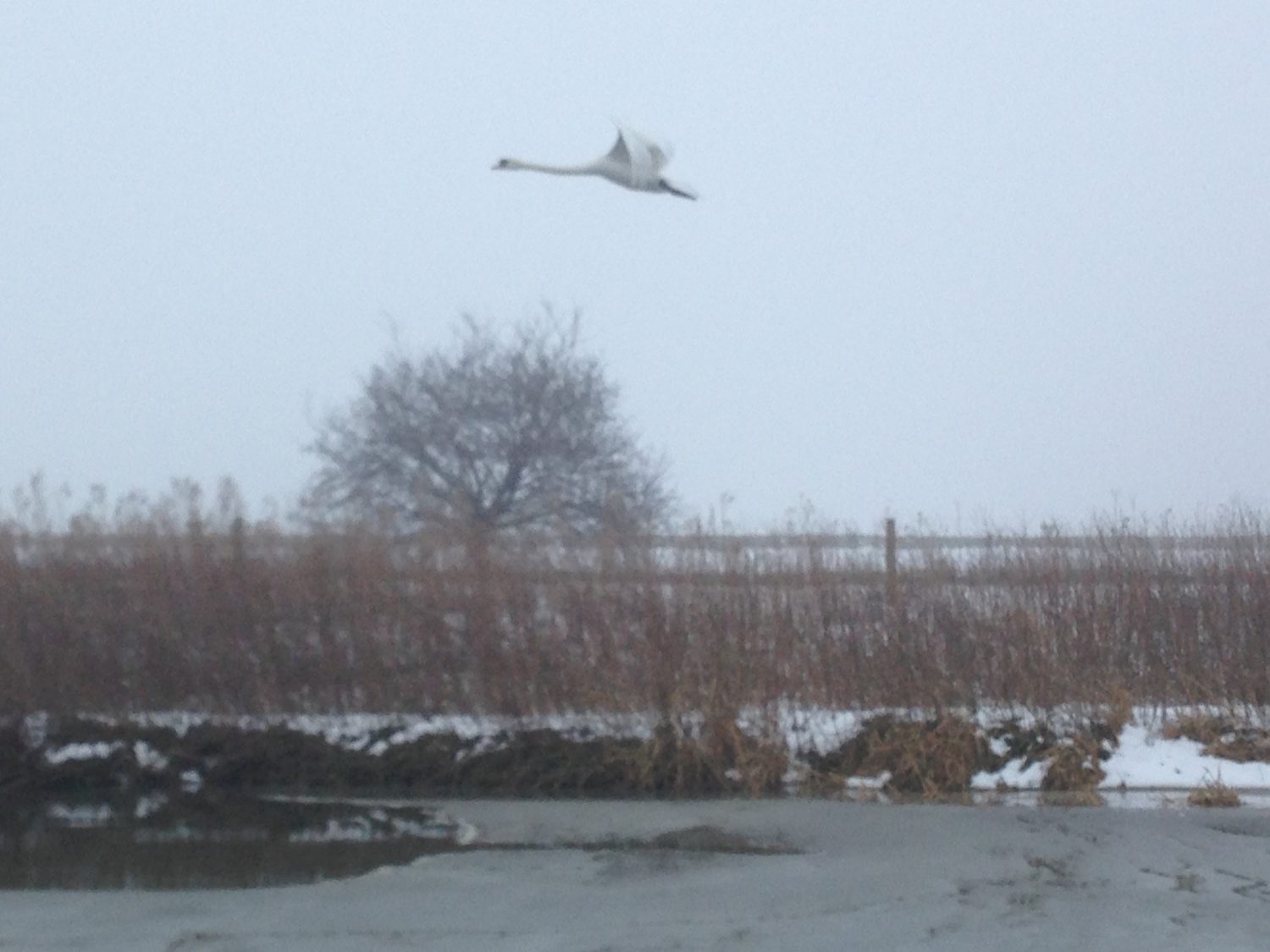 Swans took flight as we approached – not used to boats moving around here! 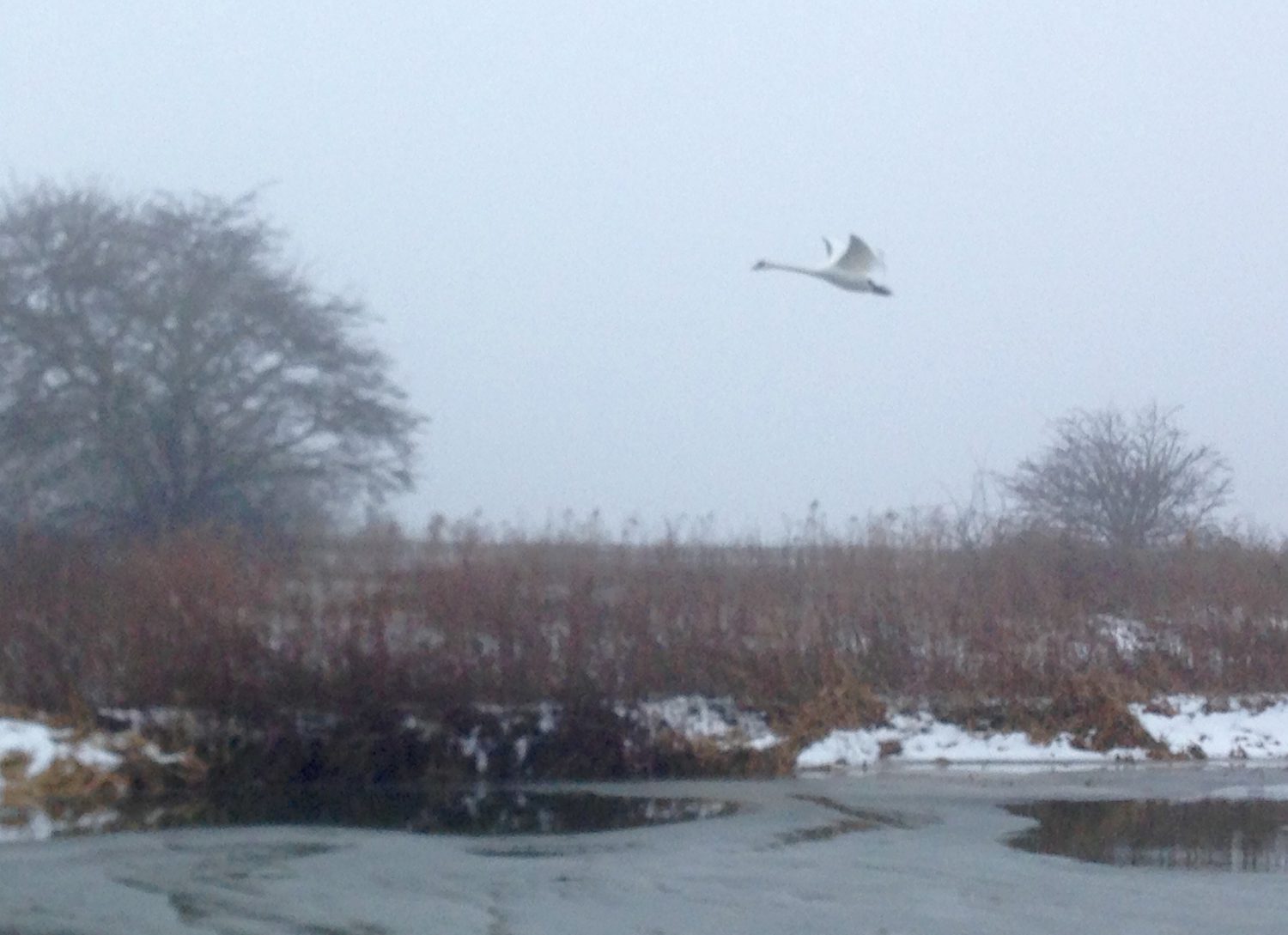 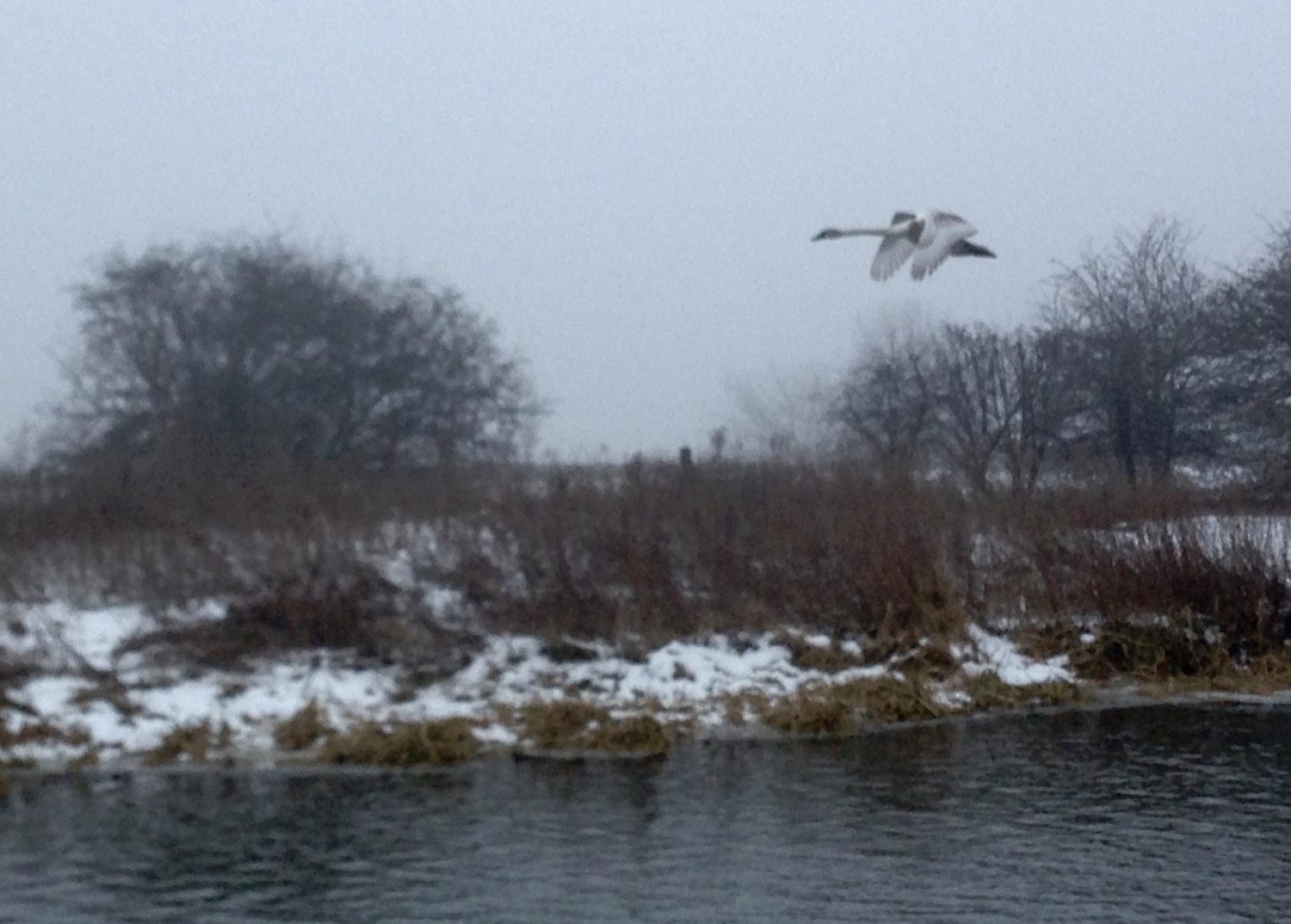 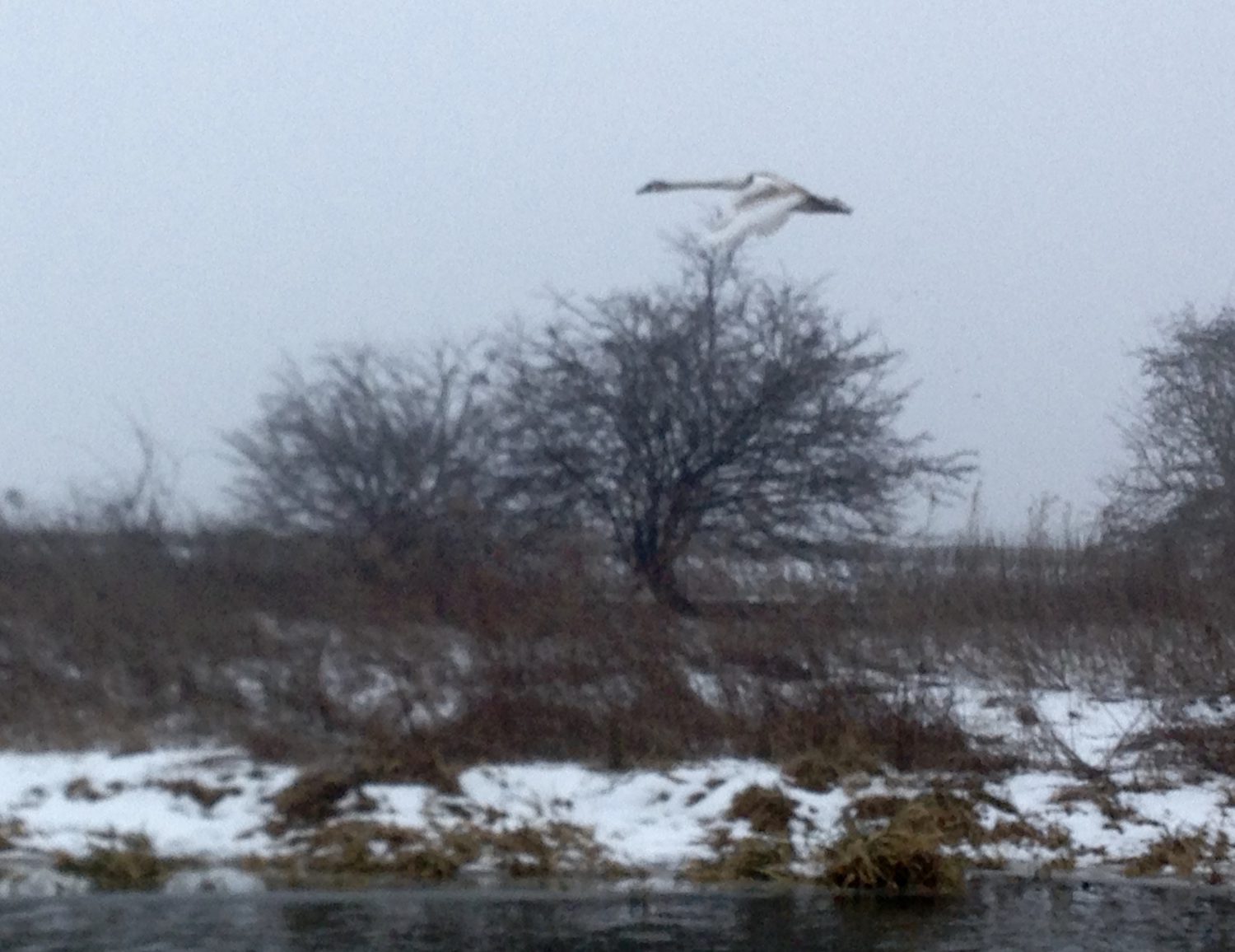 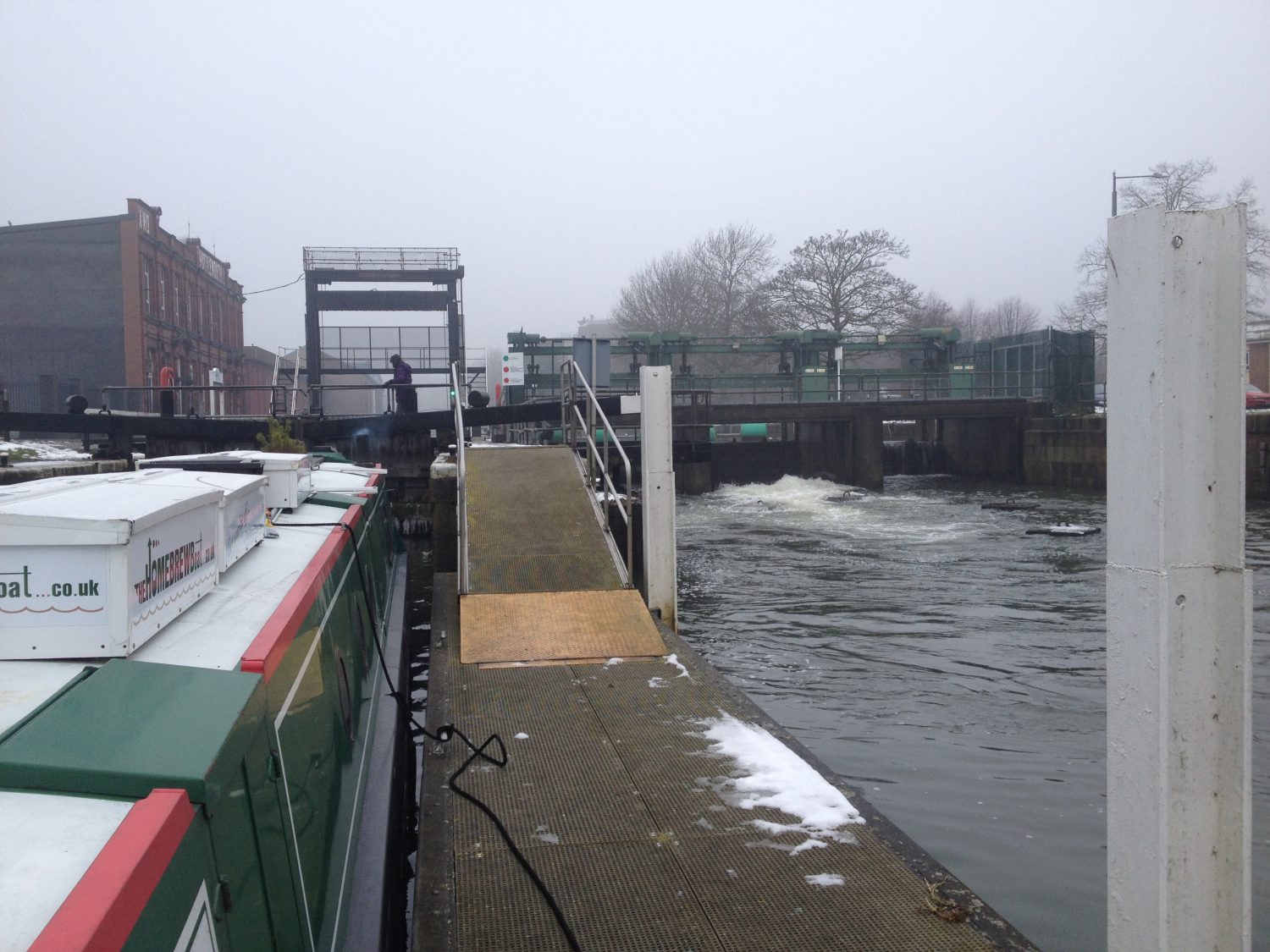 Stamp End Lock in Lincoln, a guillotine gate at the top 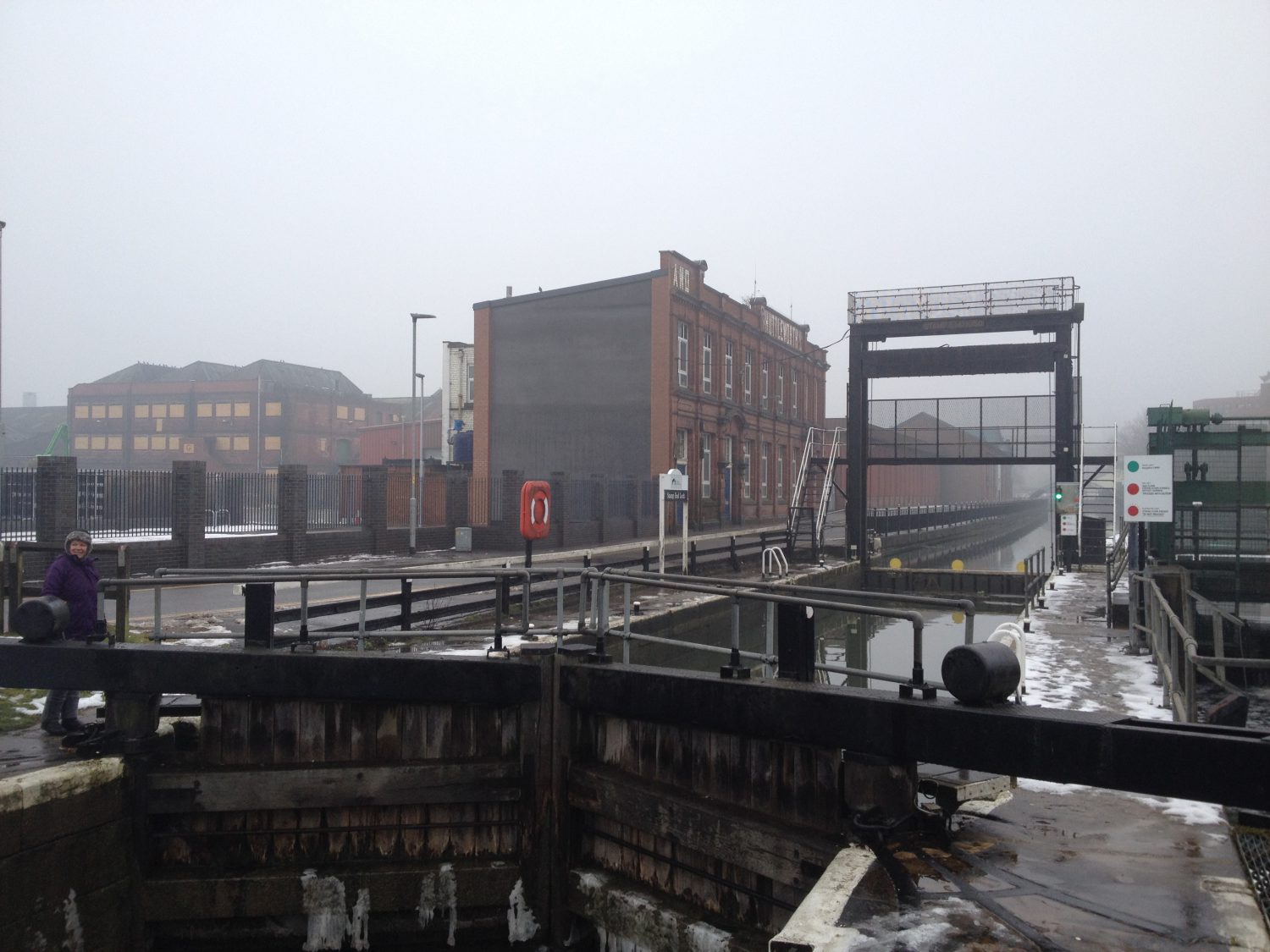 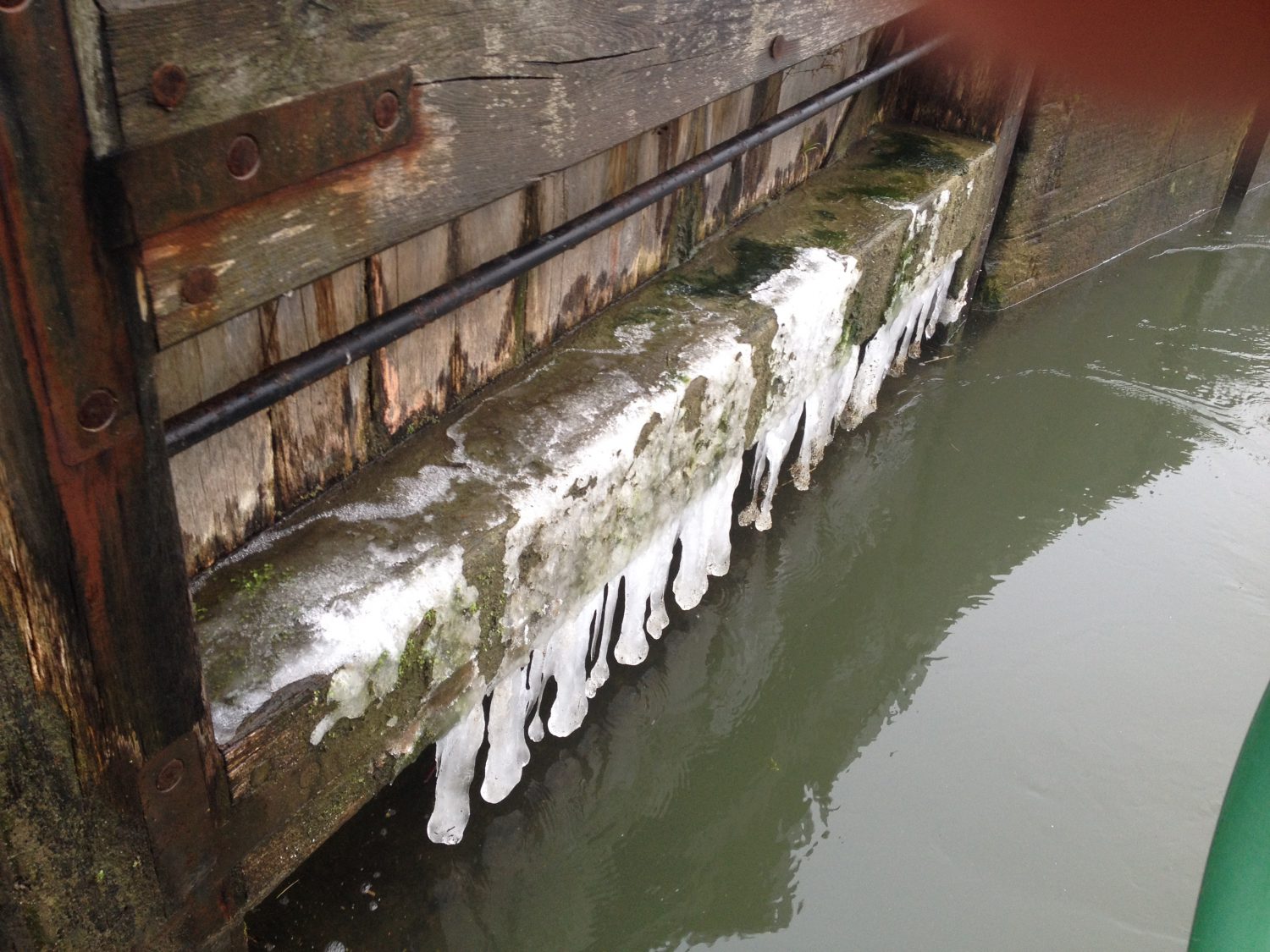 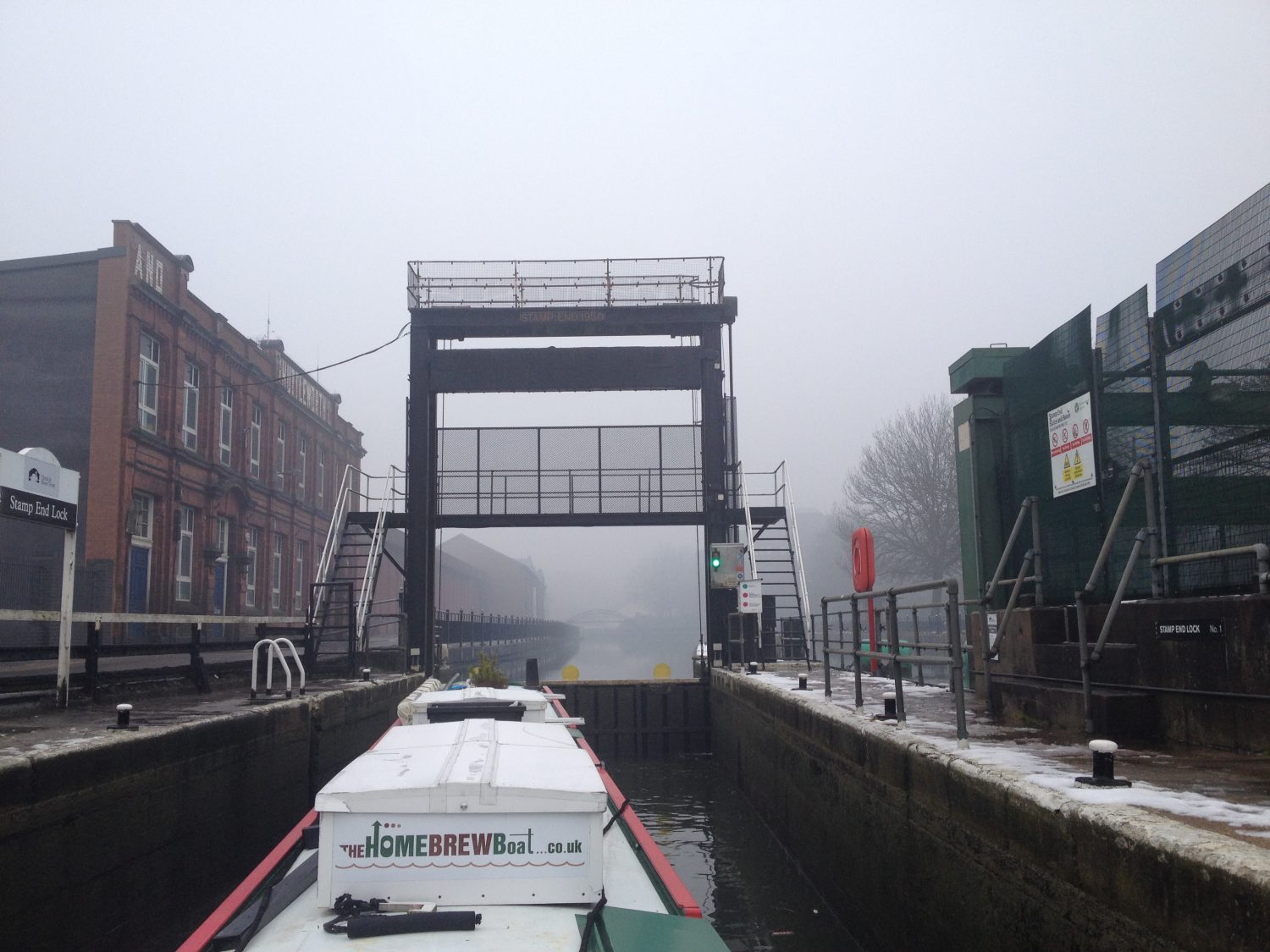 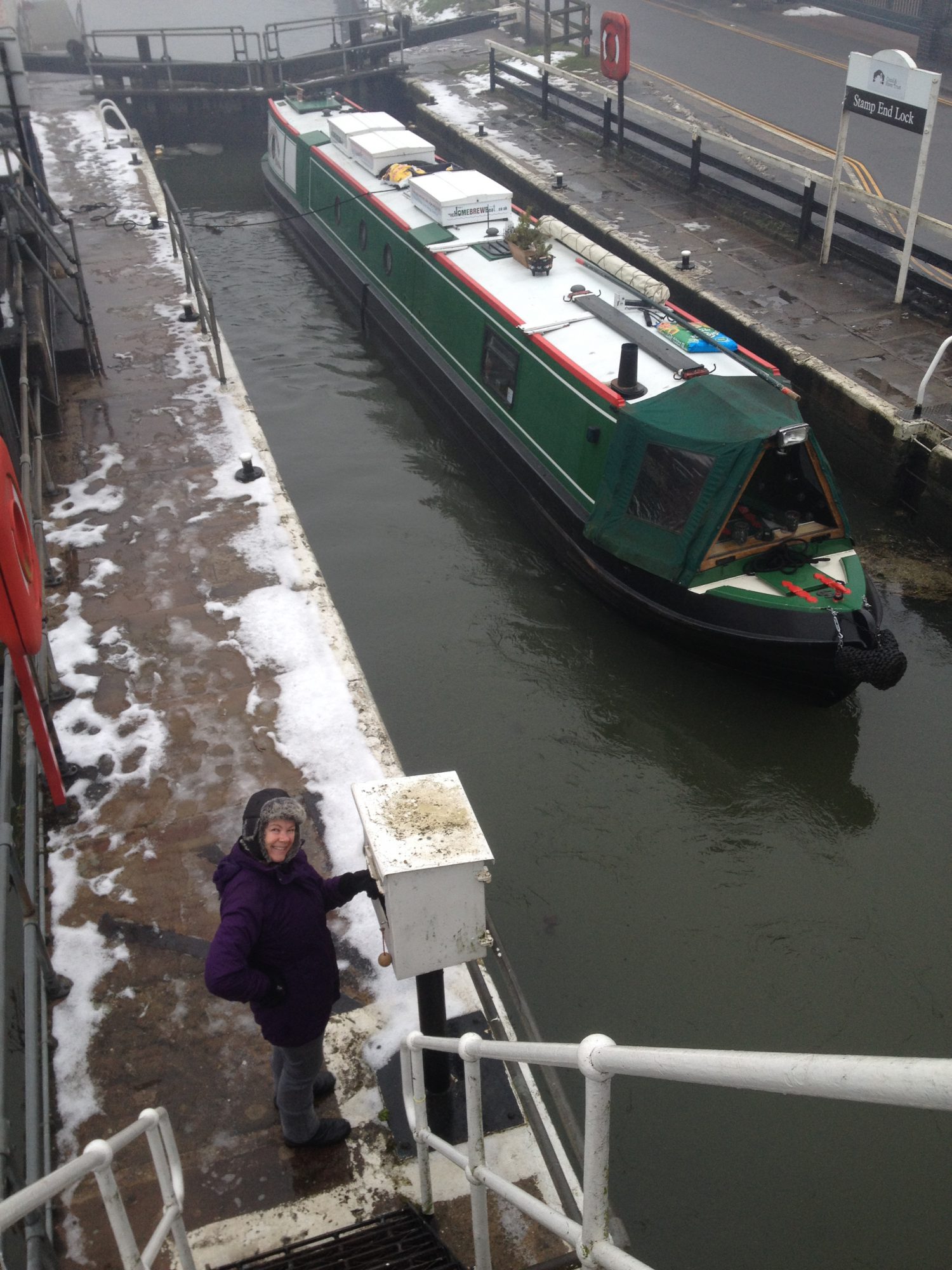 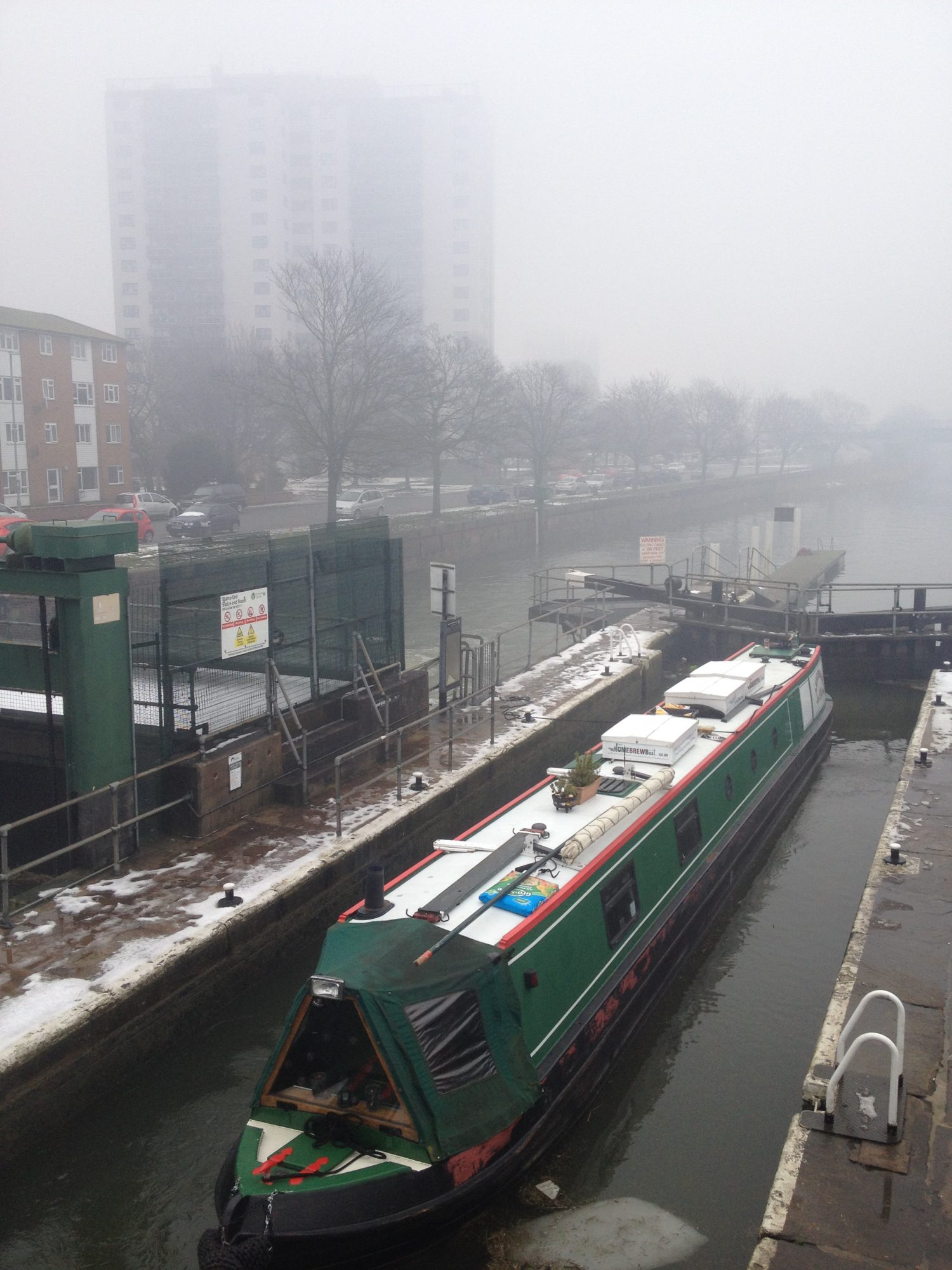 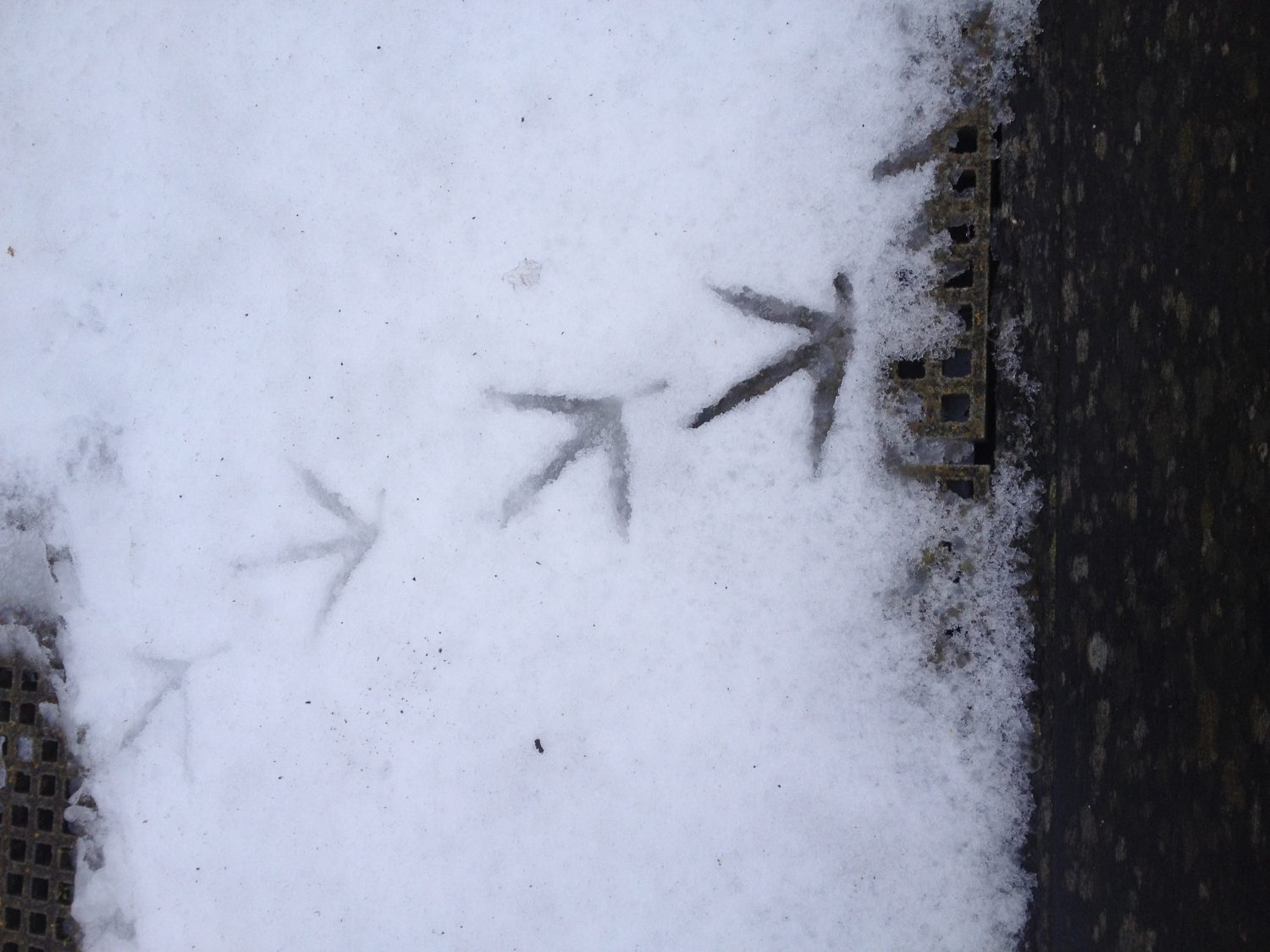 Looking like Moorhen or Coot prints on the pontoon … 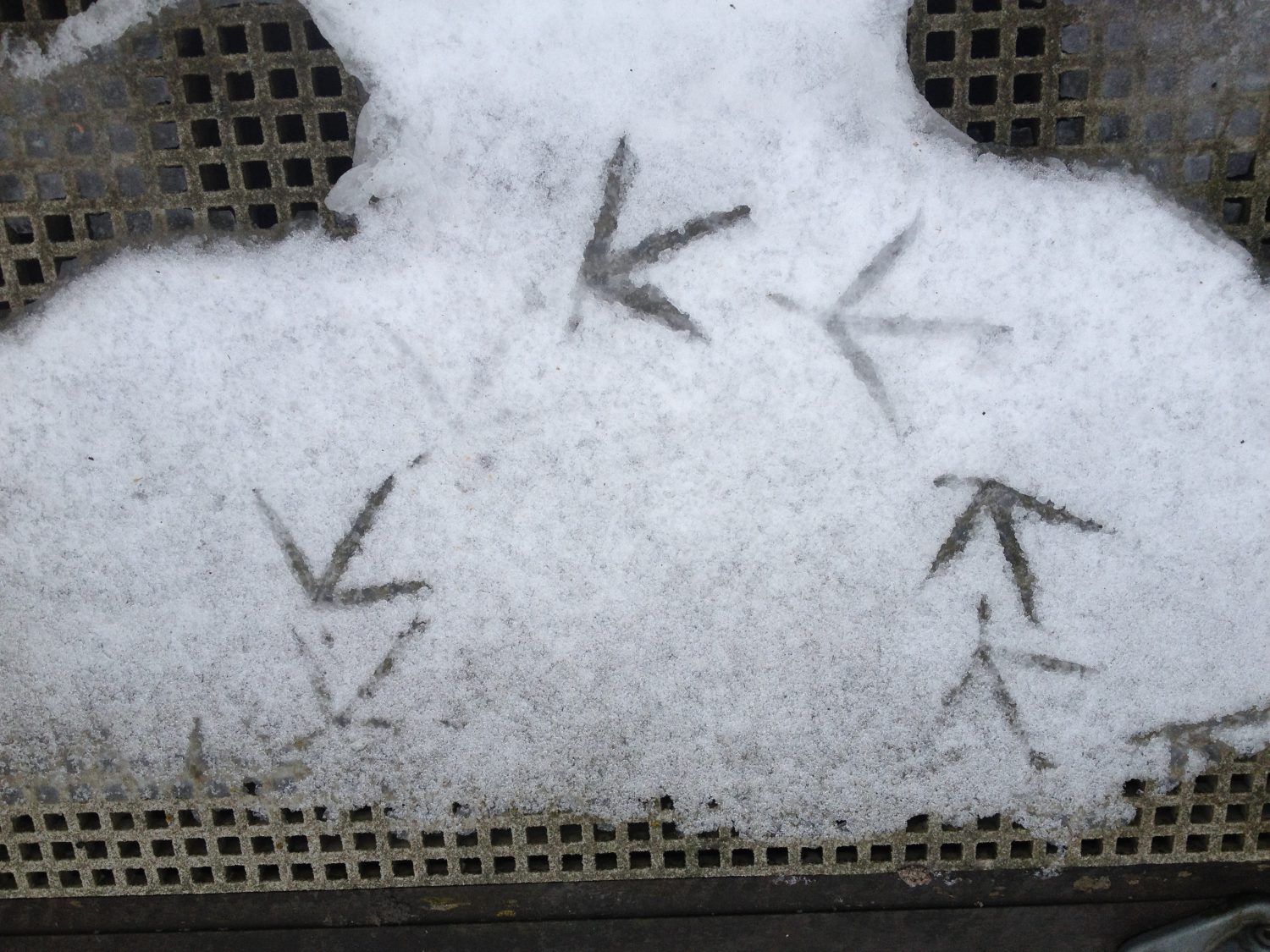 This one went in circles

Safely back in Lincoln 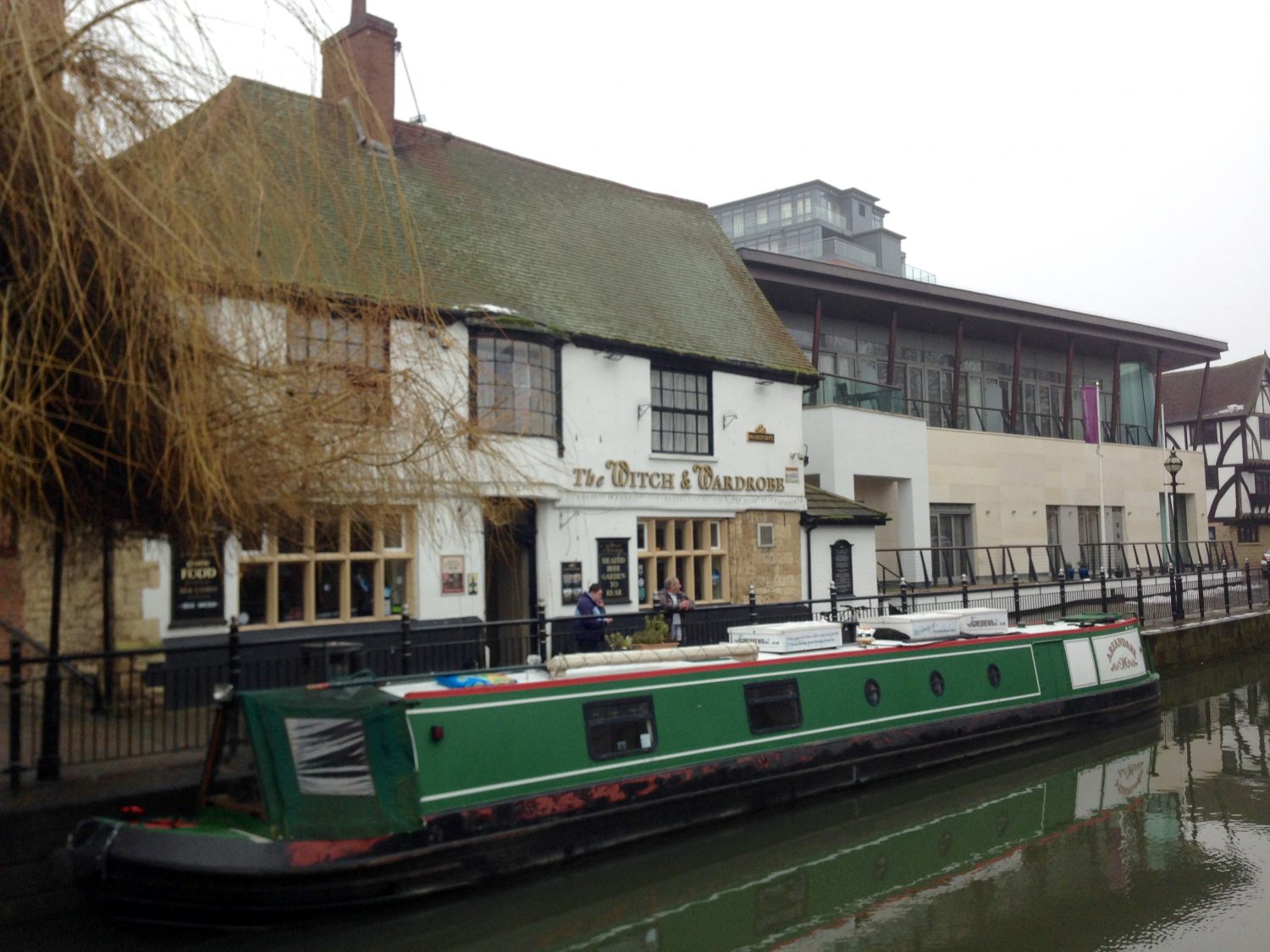 We arrived in Lincoln mid-afternoon, mooring outside the Witch and Wardrobe pub. Not the quietest of places it has to be said (maybe it’s the ghost of the former brothel employee and her lover cavorting around on the first floor?), especially when we’ve got rather accustomed to the silence and solitude on the route from Boston. I have to admit it was a truly magical time cosied up in our narrowboat home, despite the inconvenience and frustrations. We felt fortunate to witness Mother Nature (even if the extremes may be caused in some way by Global Warming) looking so stunningly beautiful. 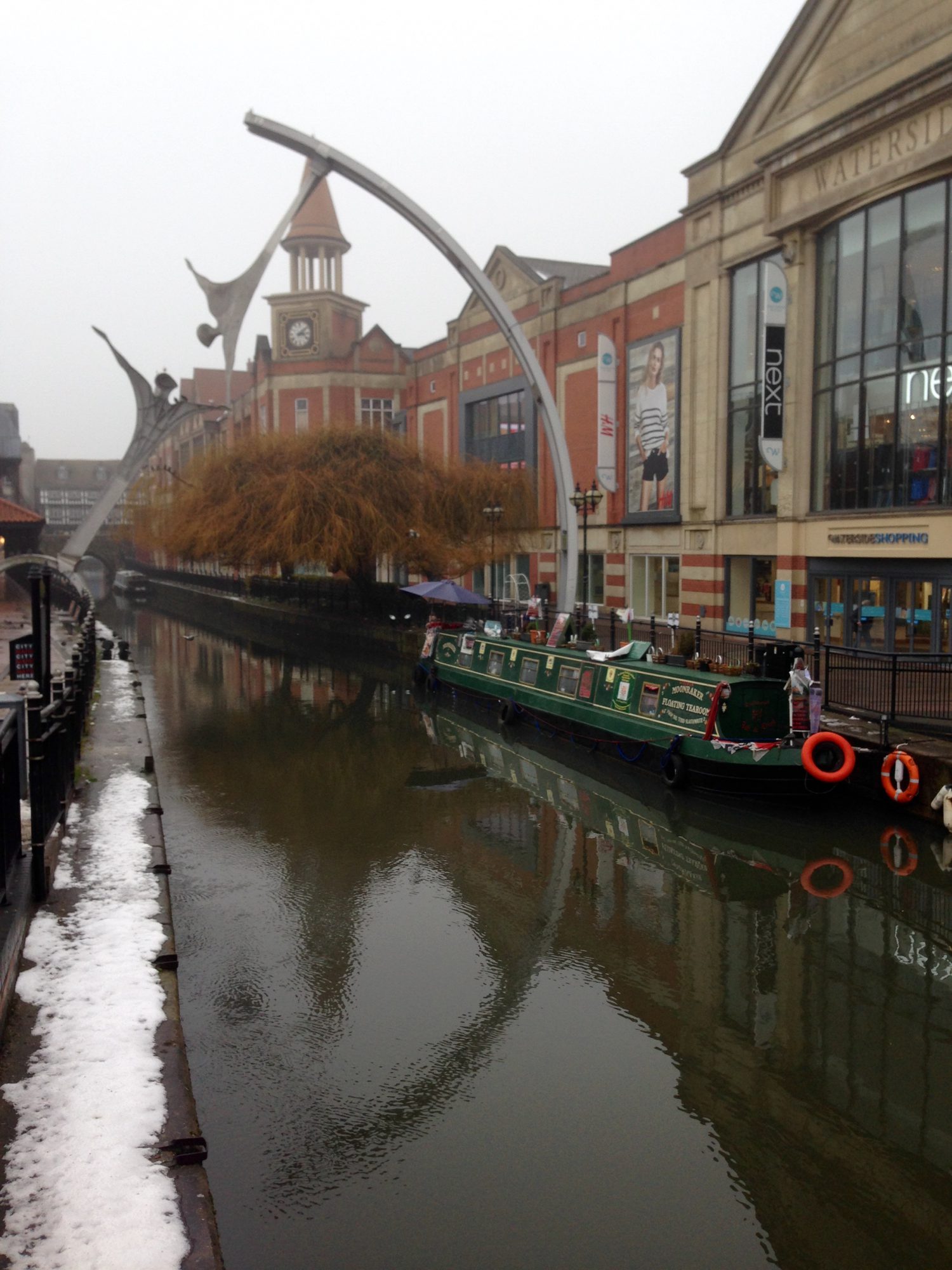 The Empowerment Sculpture by the Waterside Shopping Centre. “It takes the form of two aluminium-and-steel human figures reaching to each other across the water. The design is intended to echo the shape of turbine blades, in recognition of Lincoln’s industrial heritage.” It’s not looking as amazing as it did when Barry took a picture in 2009 – it’s one of his Greeting Card range

Our loose journey plans are being moved around somewhat in the light of unexpected events, and I cancelled the hire car booked from Sheffield on Thursday; re-booking to one from Lincoln! I’ll travel to mum’s from here, and return the car on Monday, when I’ll catch a train to wherever Barry is by then.

Sadly (??) it seems I’m not destined to return to the Tidal Trent, nor experience the thrill (!) of negotiating Keadby Lock once again. At least it’s looking highly unlikely. Barry will leave Lincoln once I’ve gone, and travel to Saxilby I suspect, then on to Torksey Lock. Hopefully he’ll have a companion journeying with him. It’s all in the planning stages at the moment. And naturally weather and tide dependant.

Before then we’ll be exploring Lincoln – and begrudgingly paying to visit the Cathedral and Castle, seeing as we missed out on the Stump and Windmill last week!

The most fabulous news is that Barry’s ‘new’ (second-hand from E-Bay) camera arrived safely at the other Barry’s today, and he kindly brought it to the boat this morning. So Barry’s already been playing with his new toy, and I’m hopeful the next post will contain images of this fine city from his new lens …

3 thoughts on “Ice Breaking success and some rescheduling required”