Knowing some essential supplies would soon be running low, yesterday we made the decision to move up River a short distance. The journey entailed forging through some fairly thick ice, dramatically demonstrating the severity of the current cold blast out east. This is quite a wide river, with a good flow on it normally. 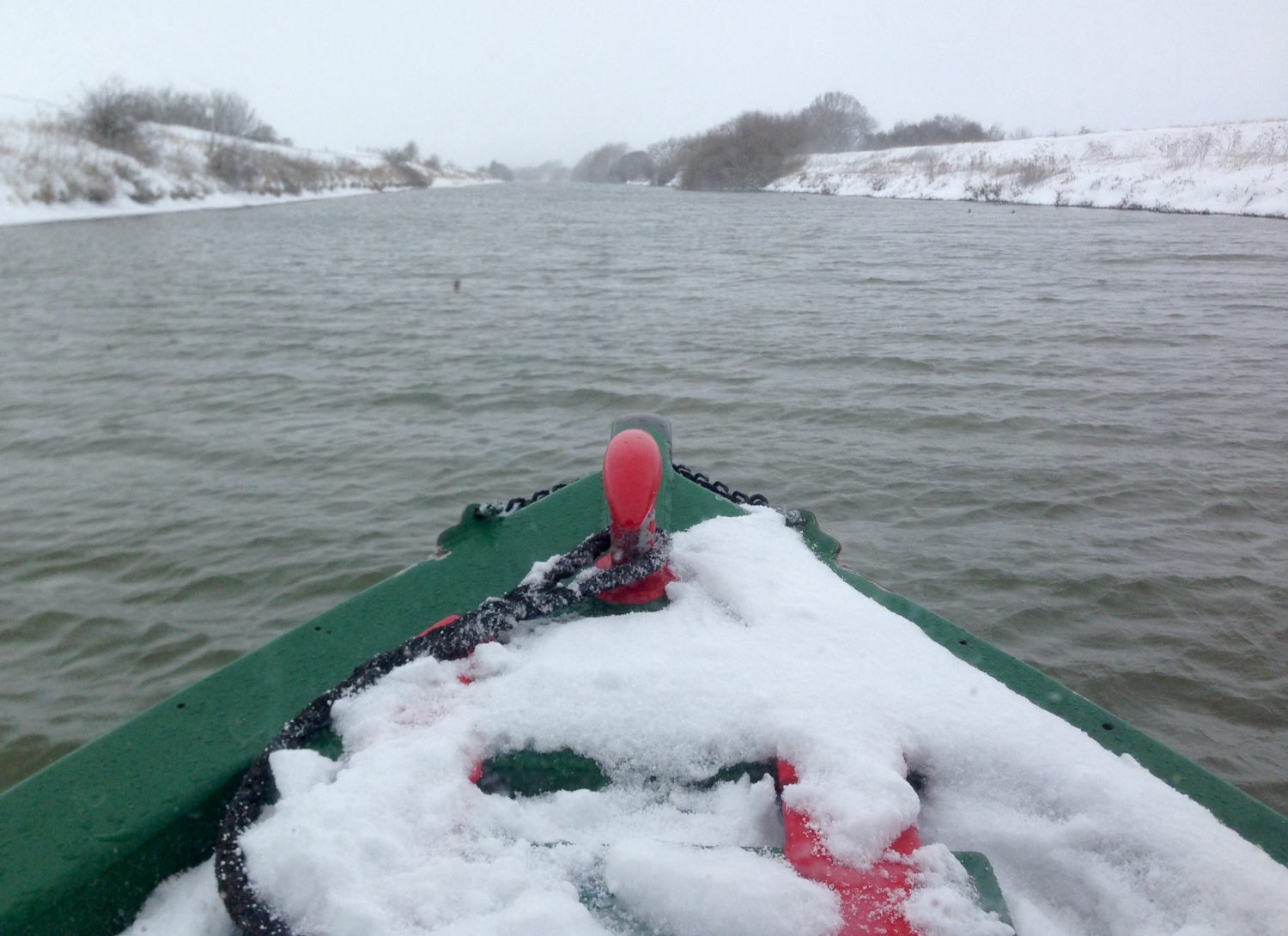 Cruising to Bardney cutting through ice at times 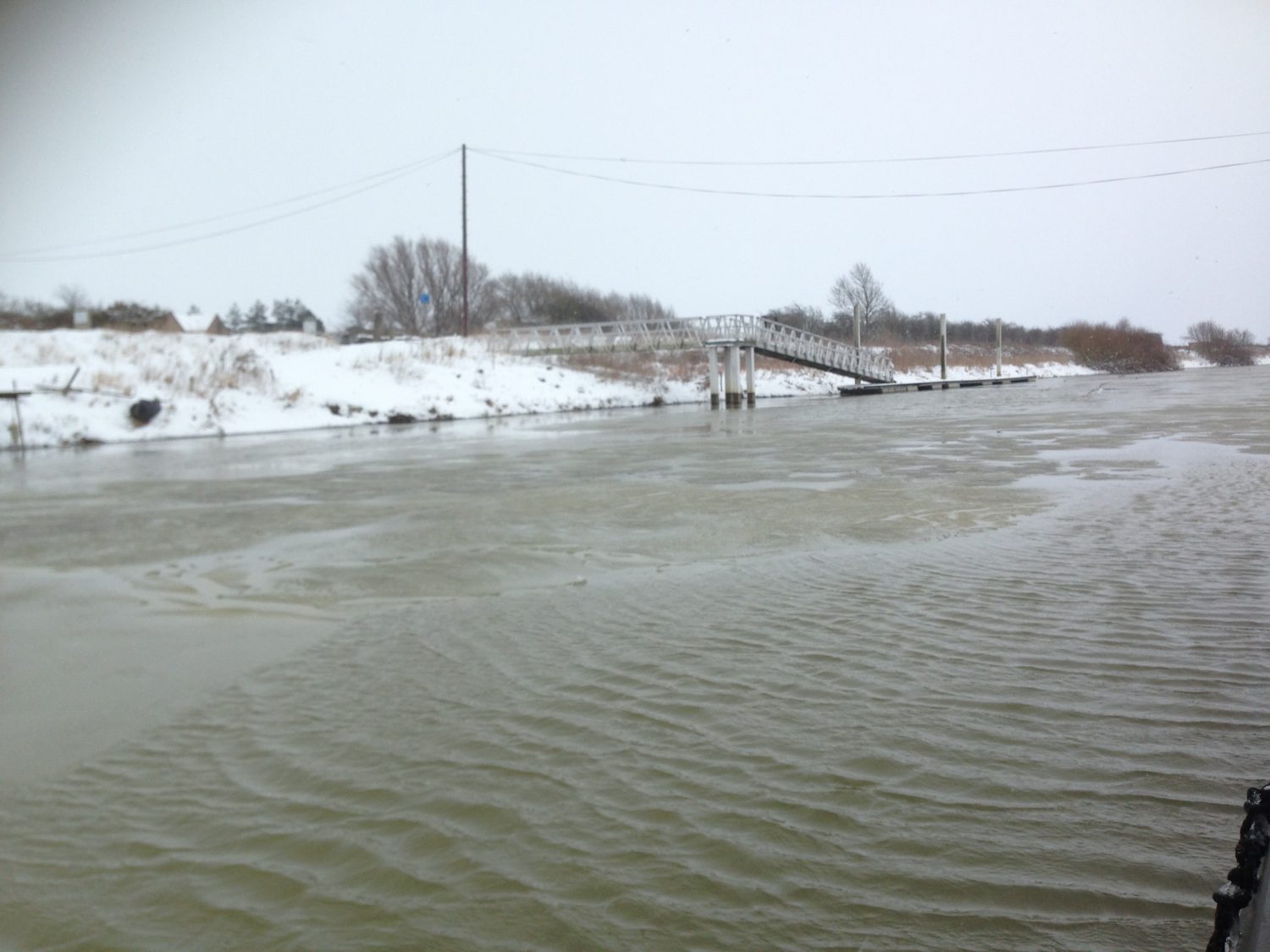 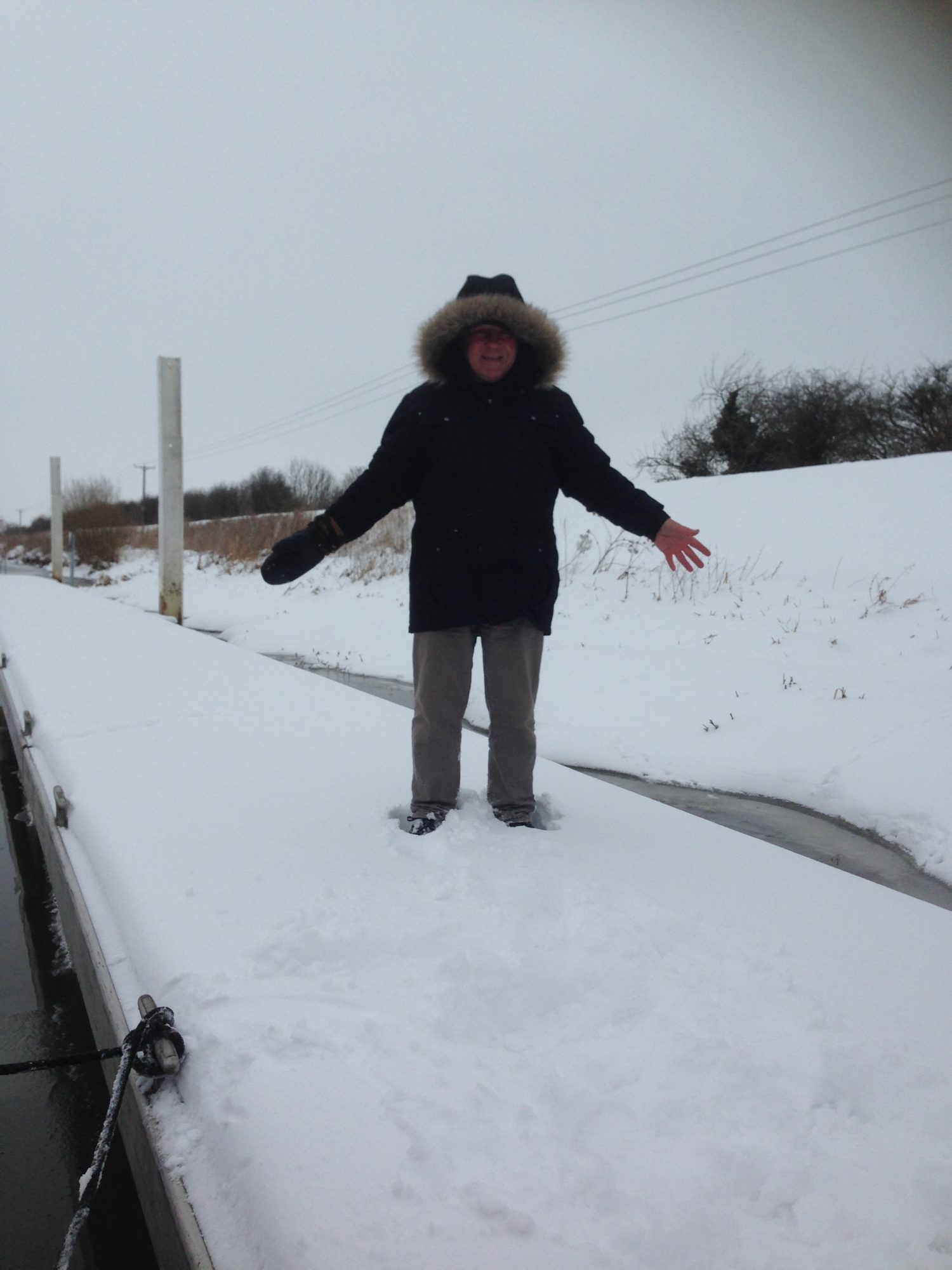 Made it! Barry’s feet have disappeared … 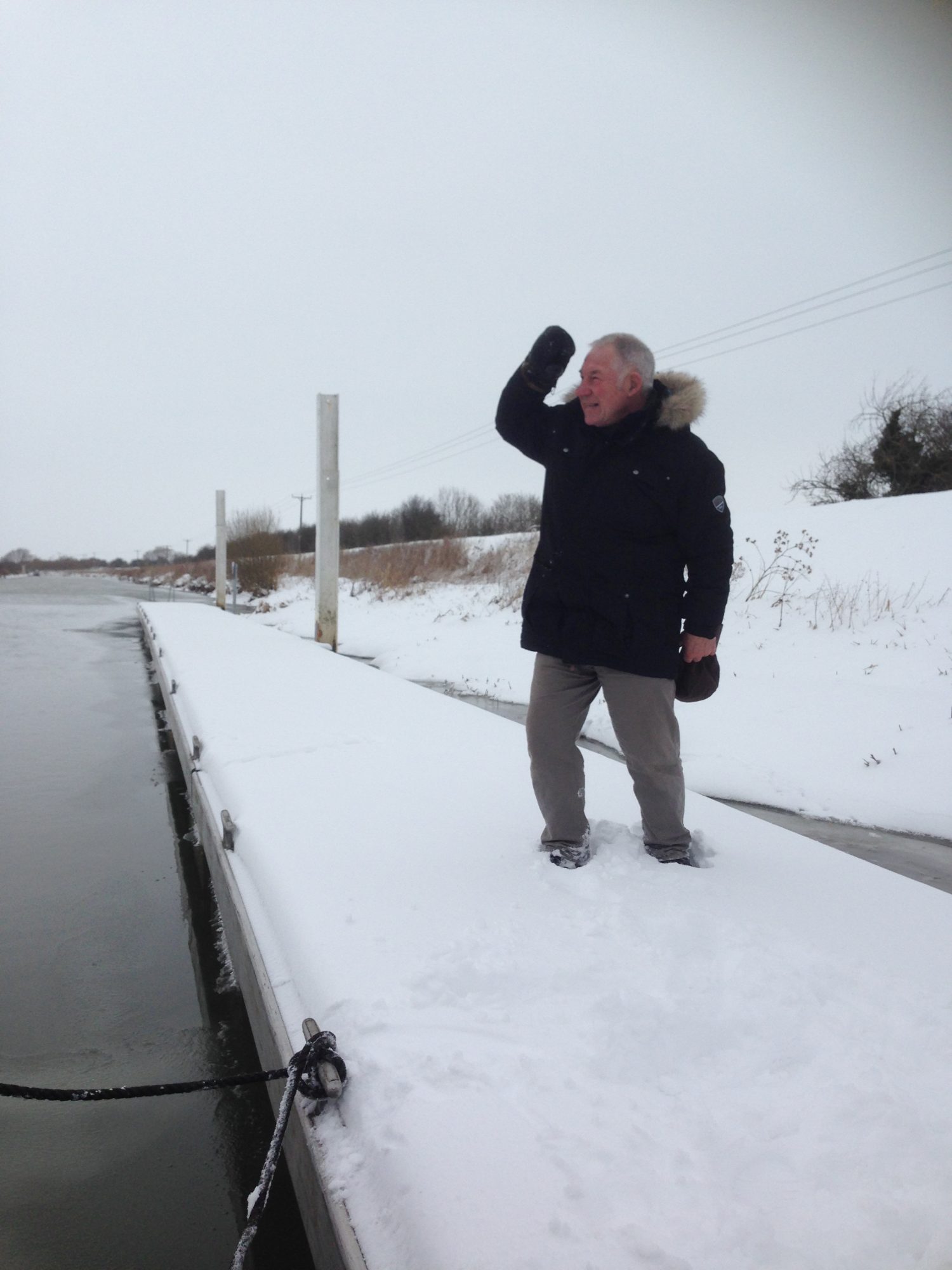 This one’s especially for Lee 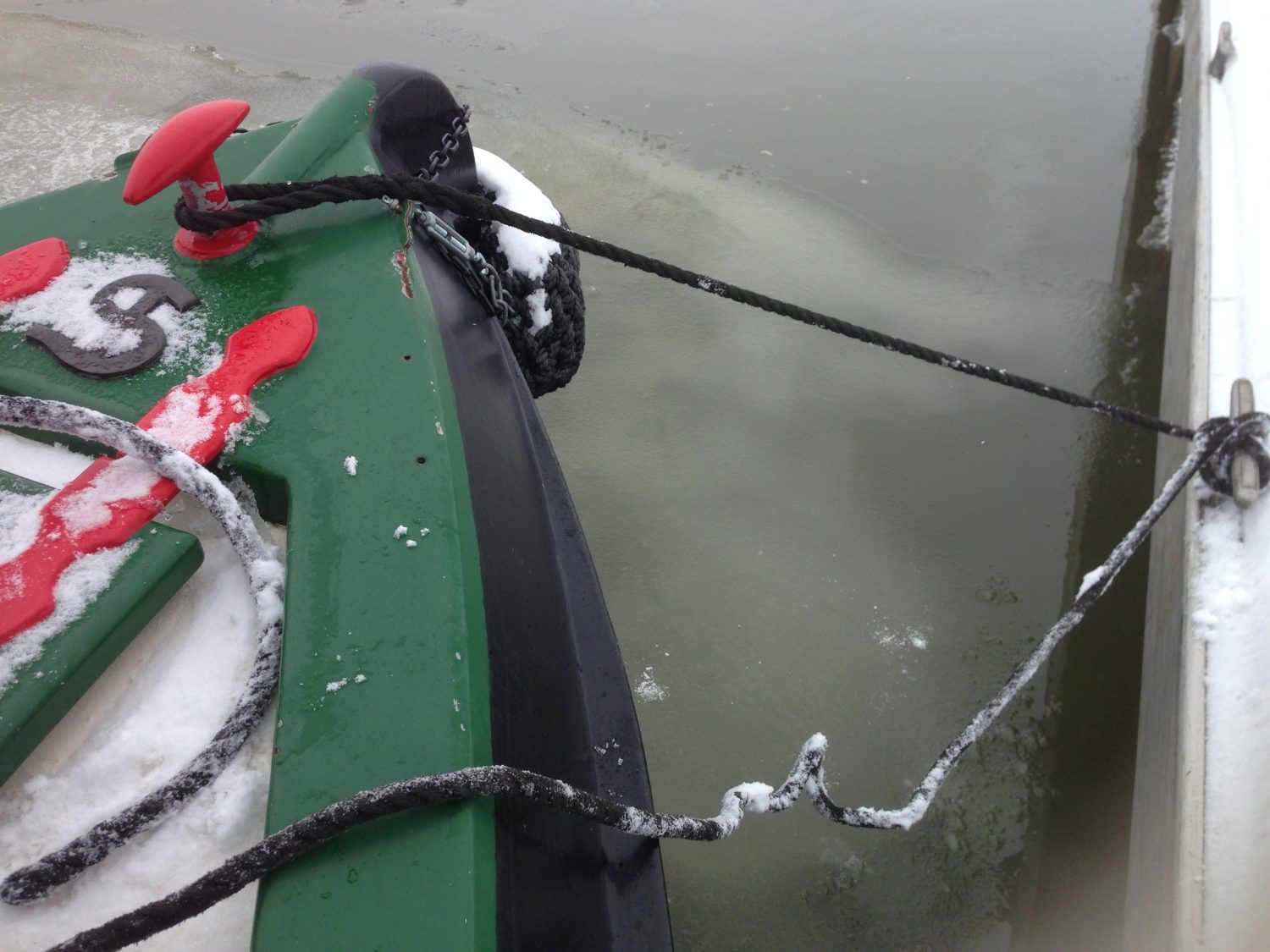 Even the ropes are frozen solid 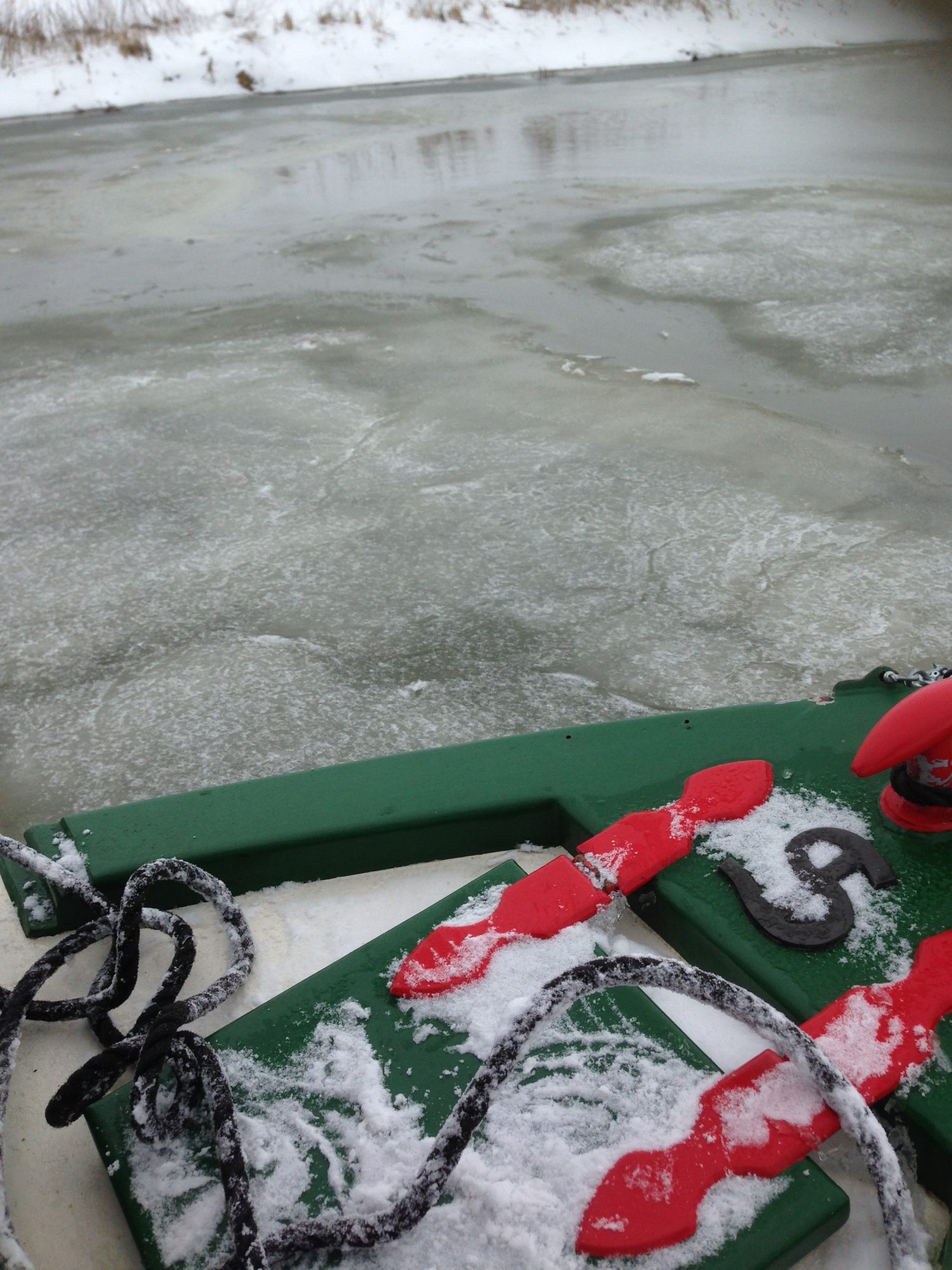 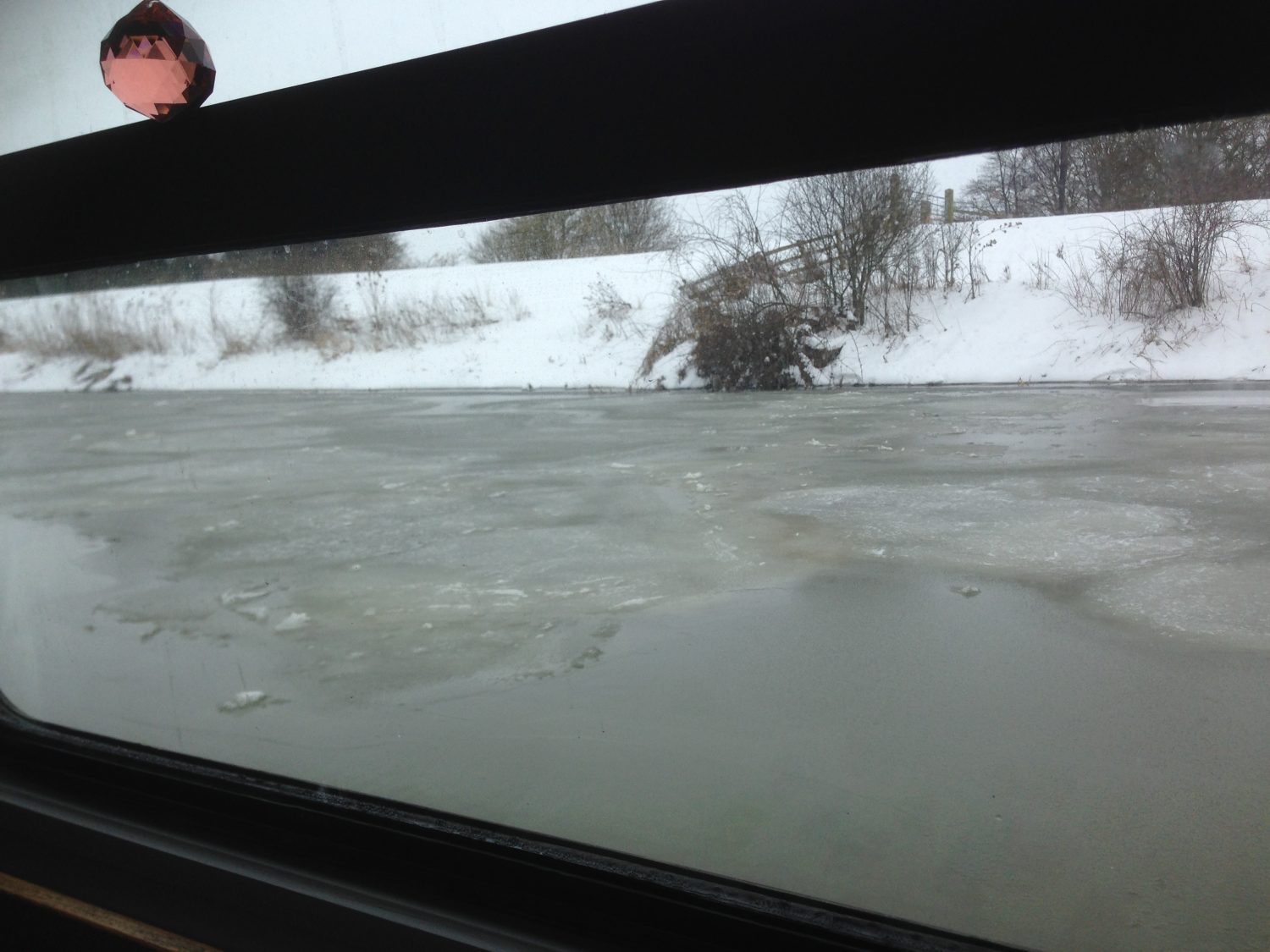 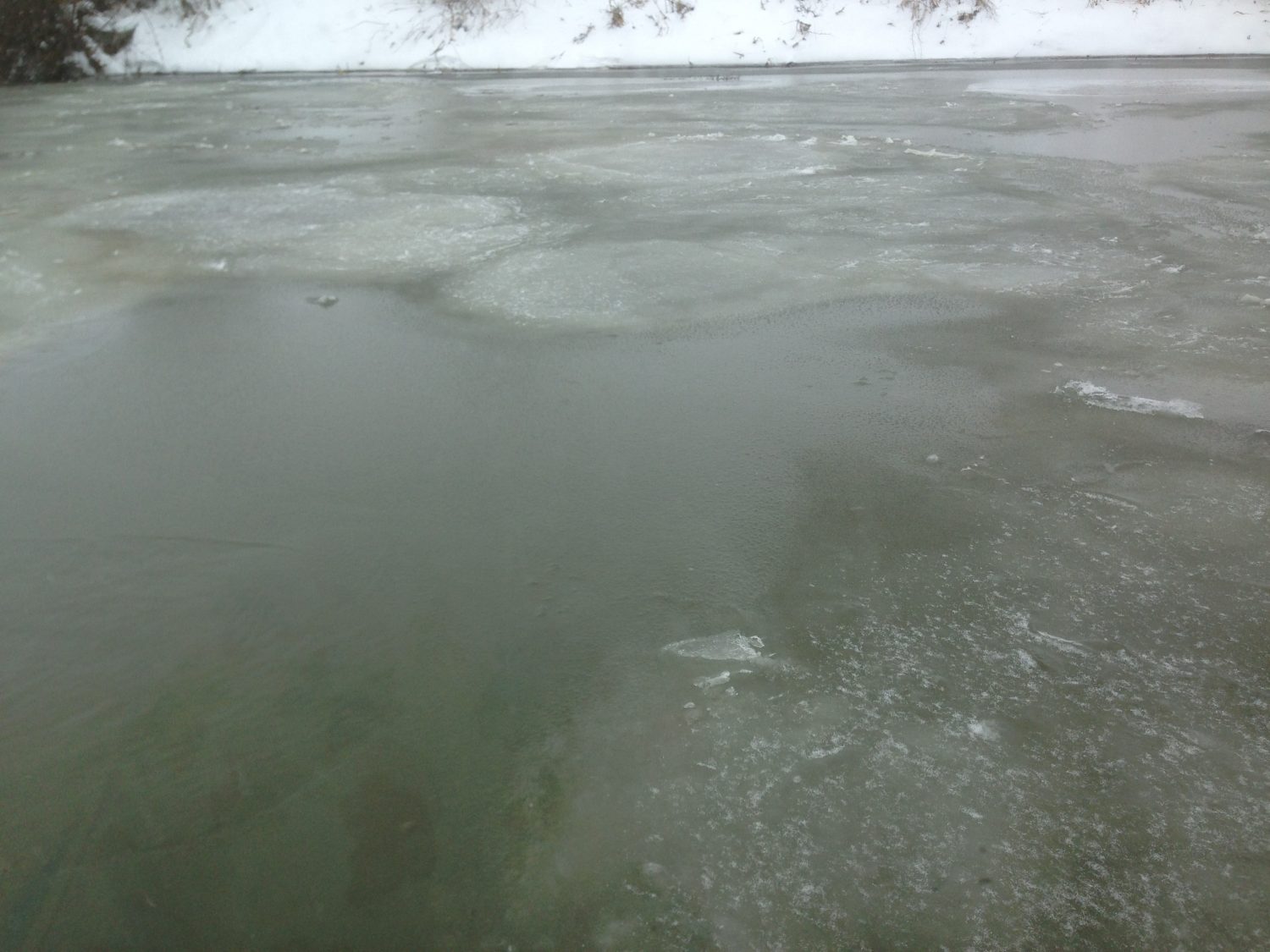 Barry chose to moor on the floating pontoon at Bardney Village, and attempt a walk to the shops for supplies of coal (essential!) and milk (needed but not crucial). Unfortunately after telephoning the Co-op store, he discovered they don’t do coal. At least they had none. Only Firelogs. They said they had ‘some’. In actuality when he got to them they had just two left! He snapped them up – and a bag of kindling. Not that a bag of kindling would keep the fire going for long. They had no milk, explaining no supplies had managed to reach them by road recently to stock up. 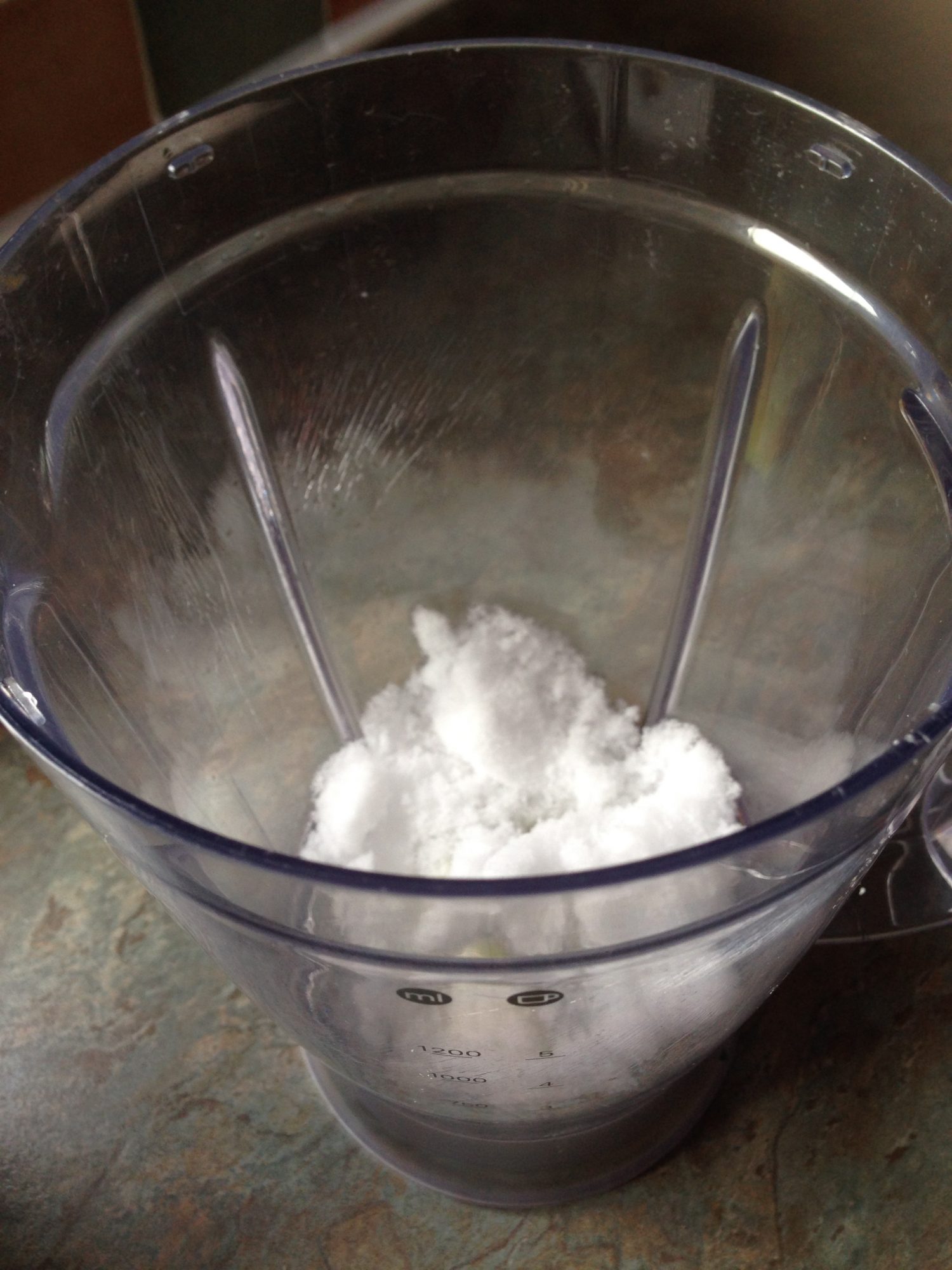 Looking on the bright side this morning, the ability to reach out of the side-hatch and scoop up some fresh, white, virgin snow to add to my Coconut Smoothie (with the freshly made coconut yoghurt Barry sells), was brilliant!

We chose last year not to run our under-seat-freezer, as it uses up too much battery power (it’s 12 volts), so when it said ‘add ice‘ in the recipe, I realised there ARE some benefits to being stranded in, and so close to, the snow!

Having been buffeted by the nearby ice overnight, crashing into the boat every now and again, Barry decided to do a bit of ice-breaking … 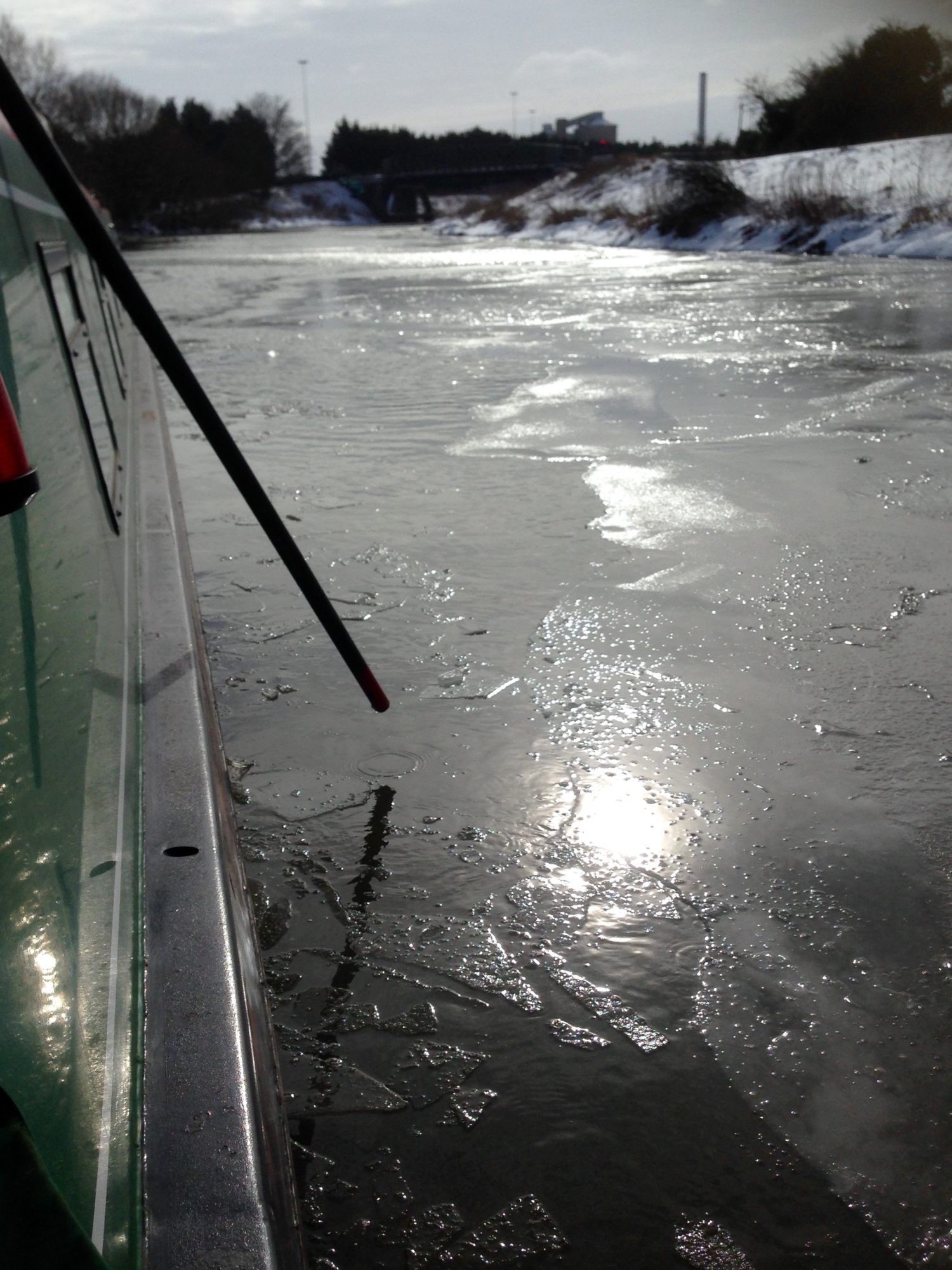 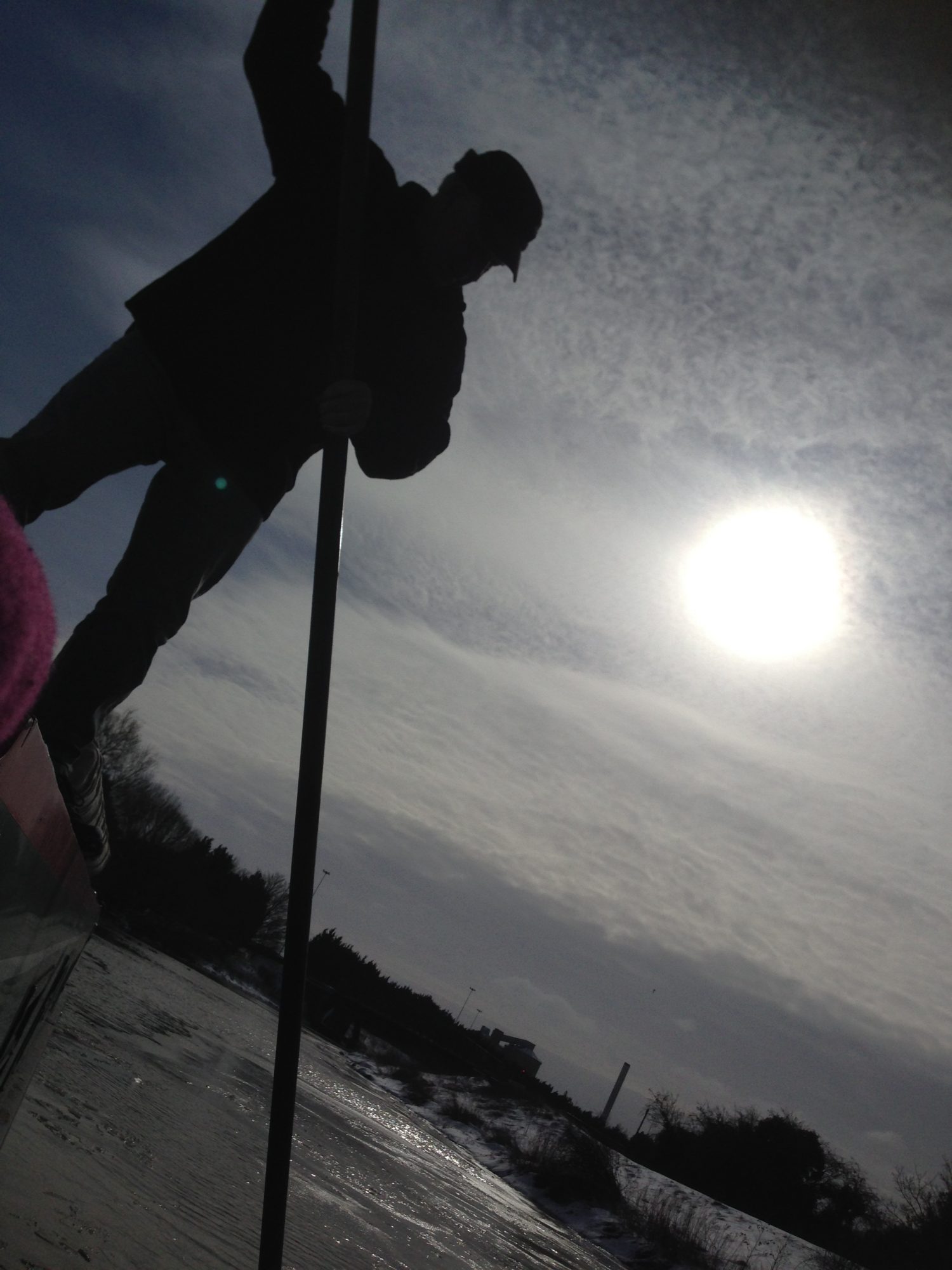 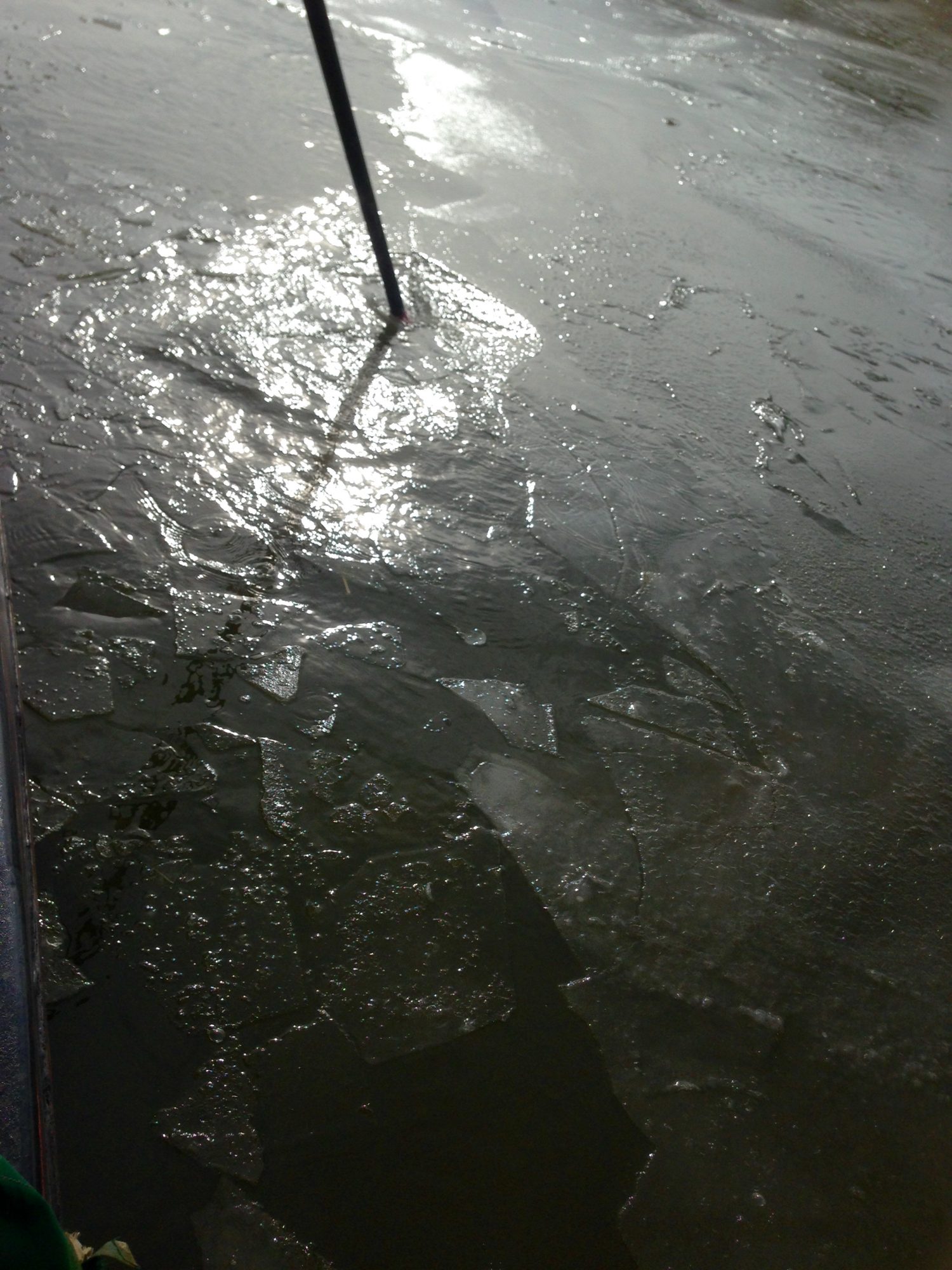 The snow is also stunningly beautiful, there’s no denying that … 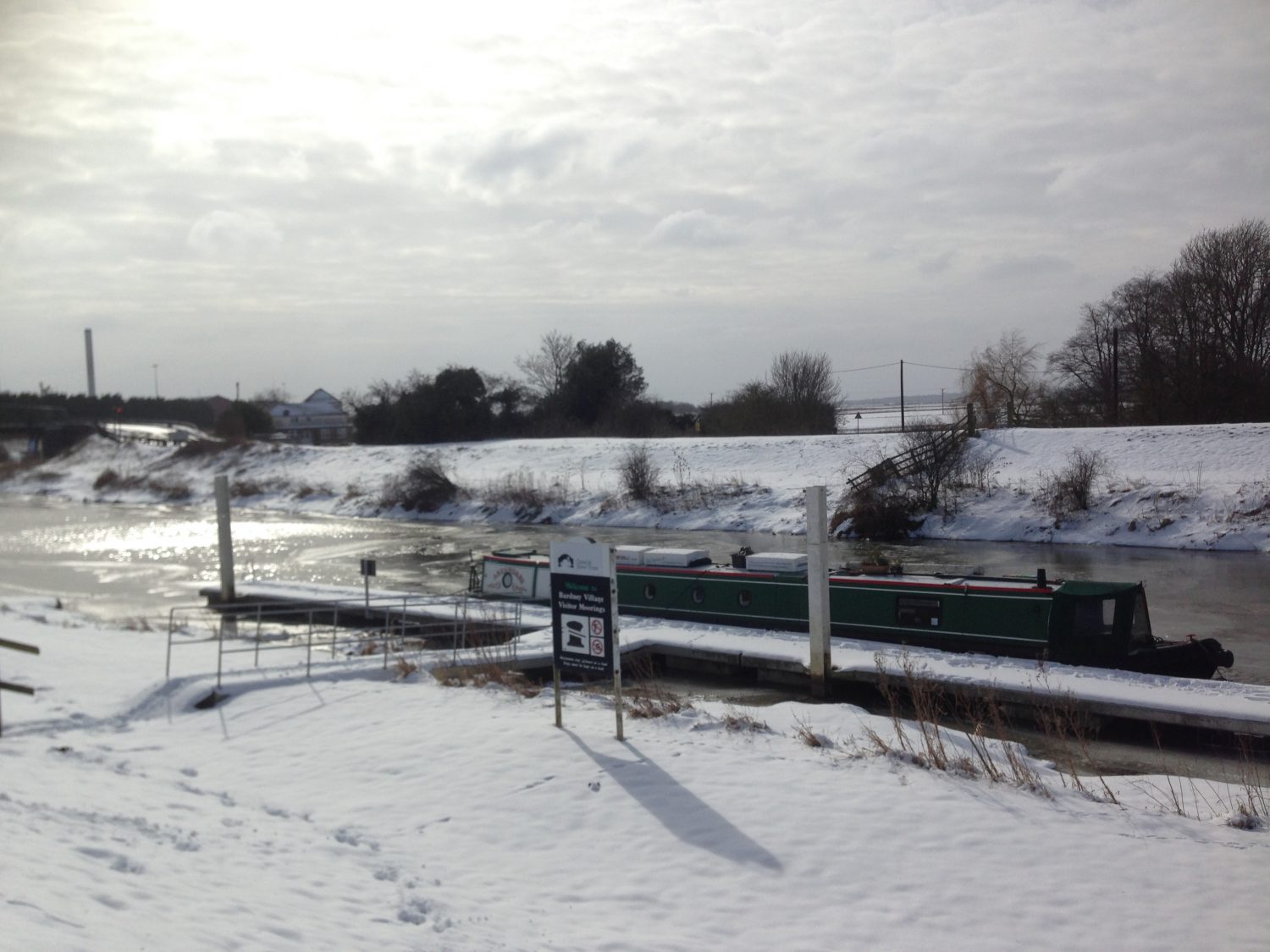 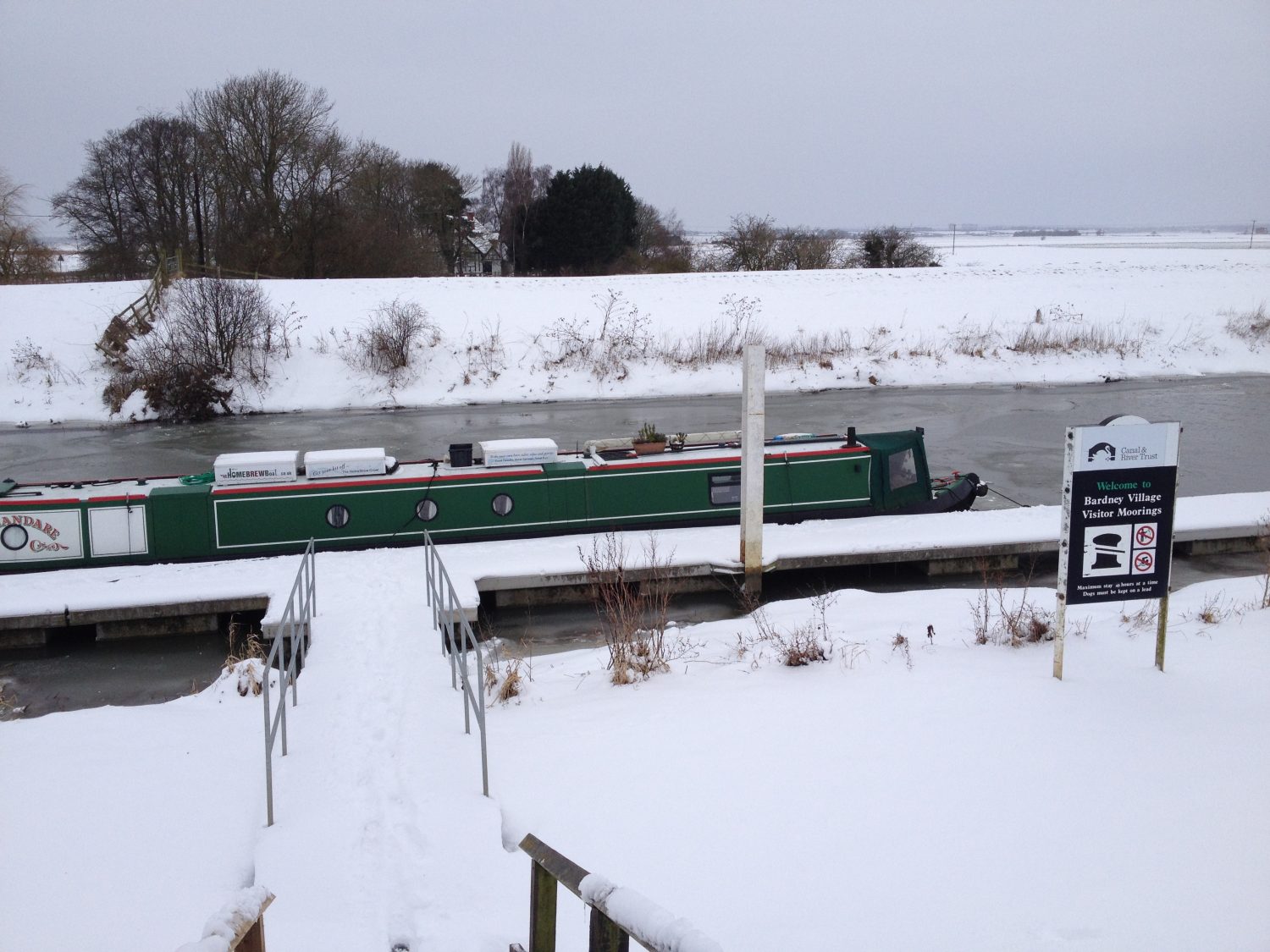 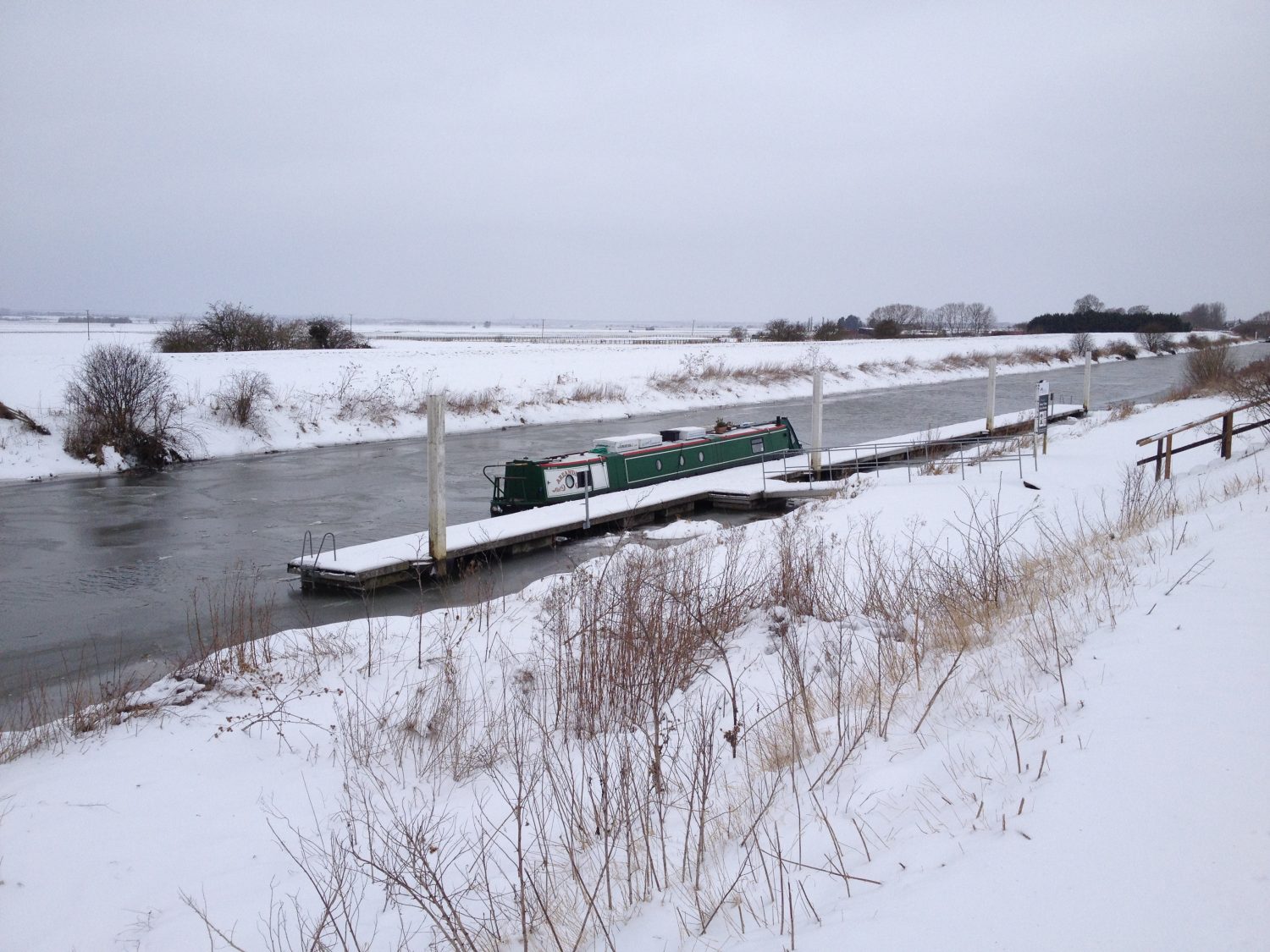 Last night we had one small bag of coal remaining. People regularly ask liveaboard narrowboaters if it’s cold in the winter. Well no, not if you’ve got a fire and fuel to keep it lit! Unfortunately for us, there’s been a distinct scarcity of suppliers recently – on the Trent, Fossdyke and Witham. We sourced our last stock up in Lincoln, by Barry walking to a nearby Homebase twice, and bringing bags back on his trolley. It’s nowhere near the quality we’re used to, burning quickly and leaving heaps of red-tinged ash remaining. But – it’s infinitely better than nothing, the possibility of which was looming ominously.

This morning we received a call from our dear, and living locally, friend Barry. He said he’d been in touch with a friend who has a 4 x 4, and they were planning on driving to Lincoln to fetch us some coal. What heroes! What I didn’t realise until a short while ago when I looked at Facebook, was that he’d put an emergency call out for us on his feed to find someone to help. What fantastic friends we have. Thank you SOOO MUCH Barry S. And the wonders of Social Media. 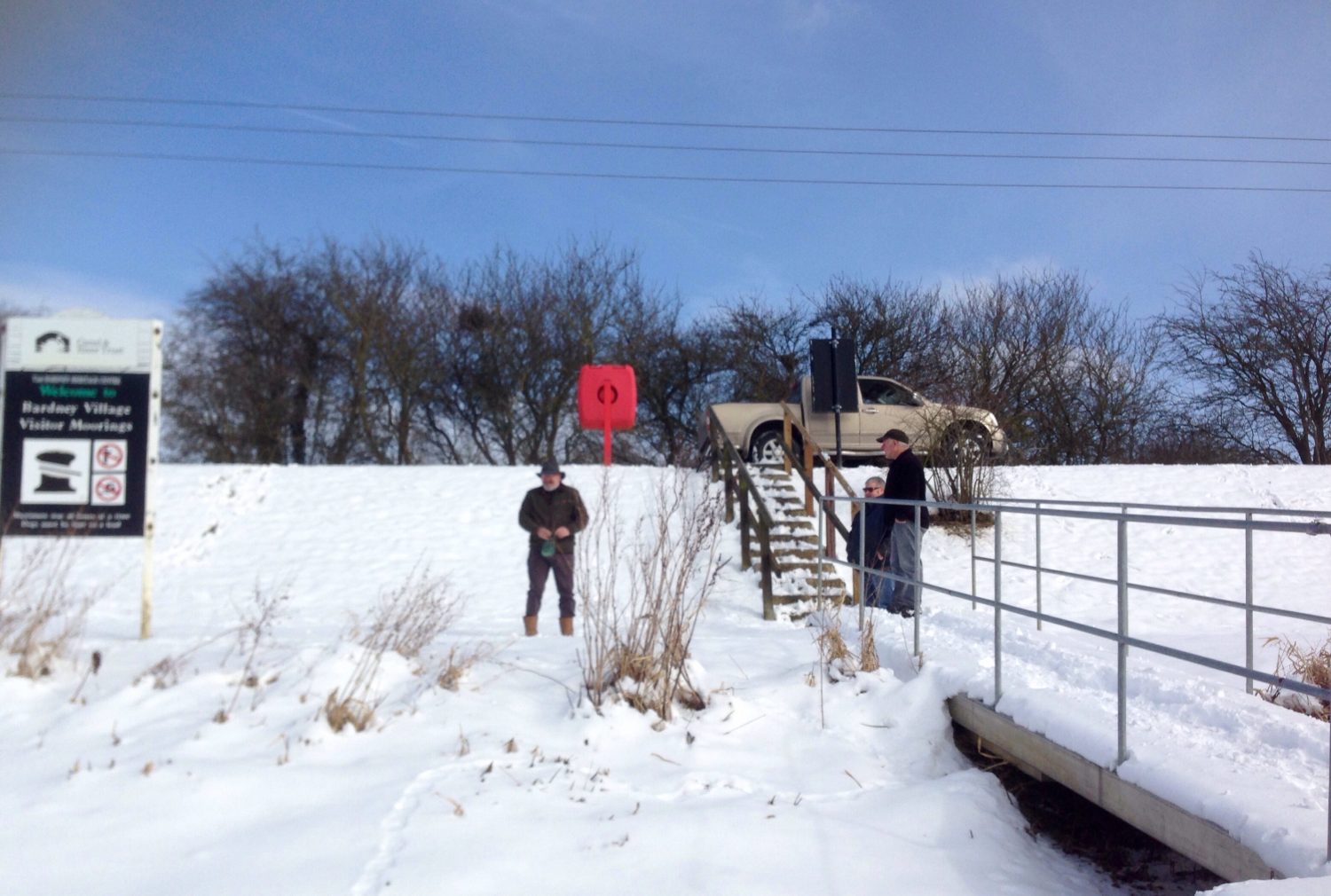 Our challenge now is dwindling water supplies – on board, not in the near vicinity of course!

While those of you living on land mostly take it for granted clean water comes out of a tap whenever you turn it on, on board we store it in two large tanks. Unfortunately Barry didn’t fill them both before we left Lincoln, as the front of the boat was precariously overhanging the pontoon. It seems our supplies are now at ’emergency’ levels. Especially as we were foolish enough to do three loads of washing on the journey, imagining we’d get to Bardney Lock okay to fill up. Oh bugger! Showers are out of the question then. But don’t worry, there’s plenty of gin and wine on board, even a spot of cider – and a bottle and a half of tonic. So we’re unlikely to dehydrate for a week or so. Though we may start to stink if the thaw doesn’t arrive soon …

Barry walked to the lock while I magicked up some home-made carrot soup (still sufficient food to keep us going for a few days thank goodness), to see if there was the remotest possibility of travelling through it (the lock, not the soup!) – and filling up with water. Hmmmm …, what do you reckon? Here’s some images Barry took on his iPhone 4s (his new camera hasn’t yet arrived – unsurprisingly no post getting through to Metheringham!): 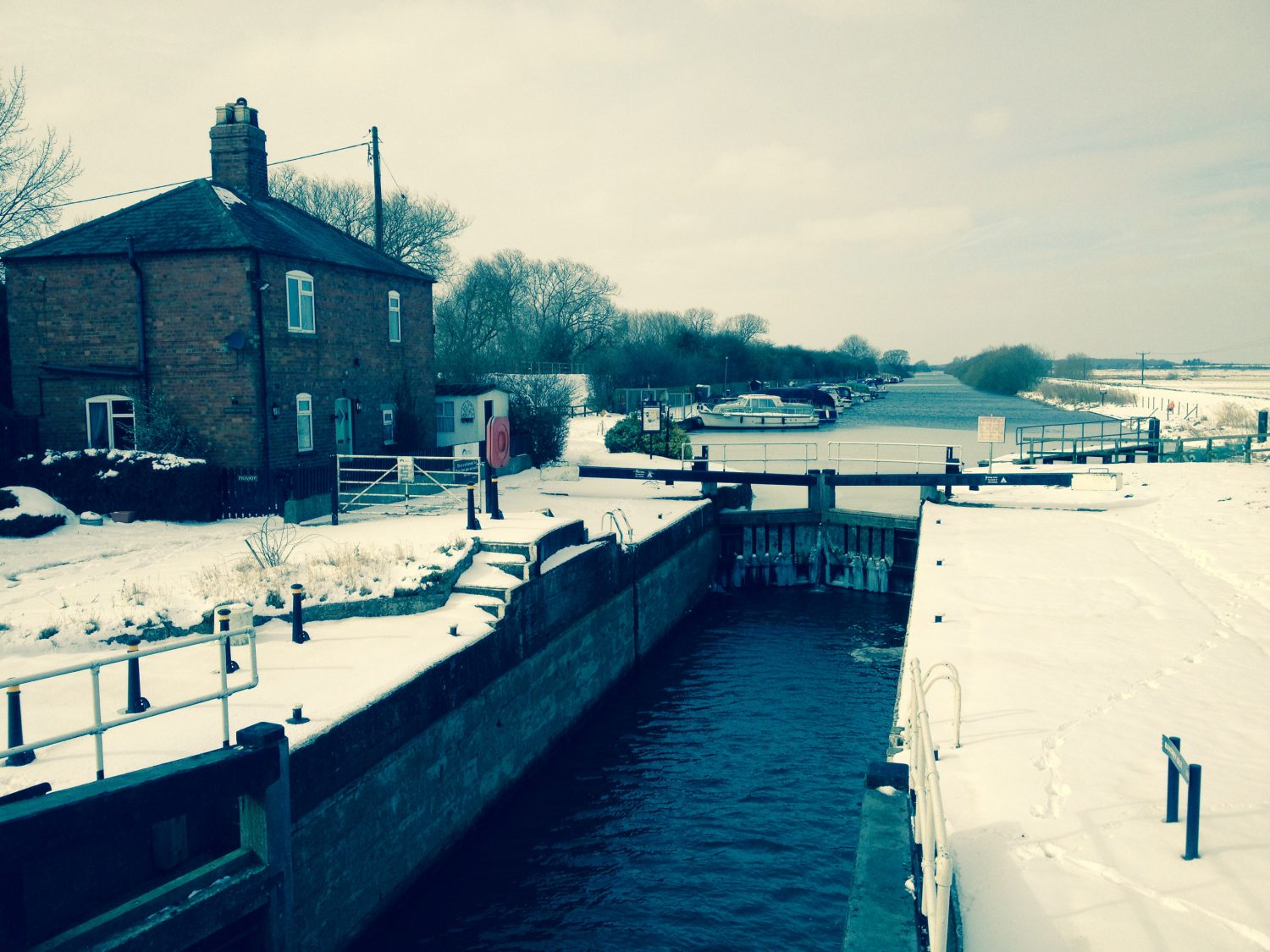 Bardney Lock – gates open at one end, but it’s likely you wouldn’t open the gates at the top! 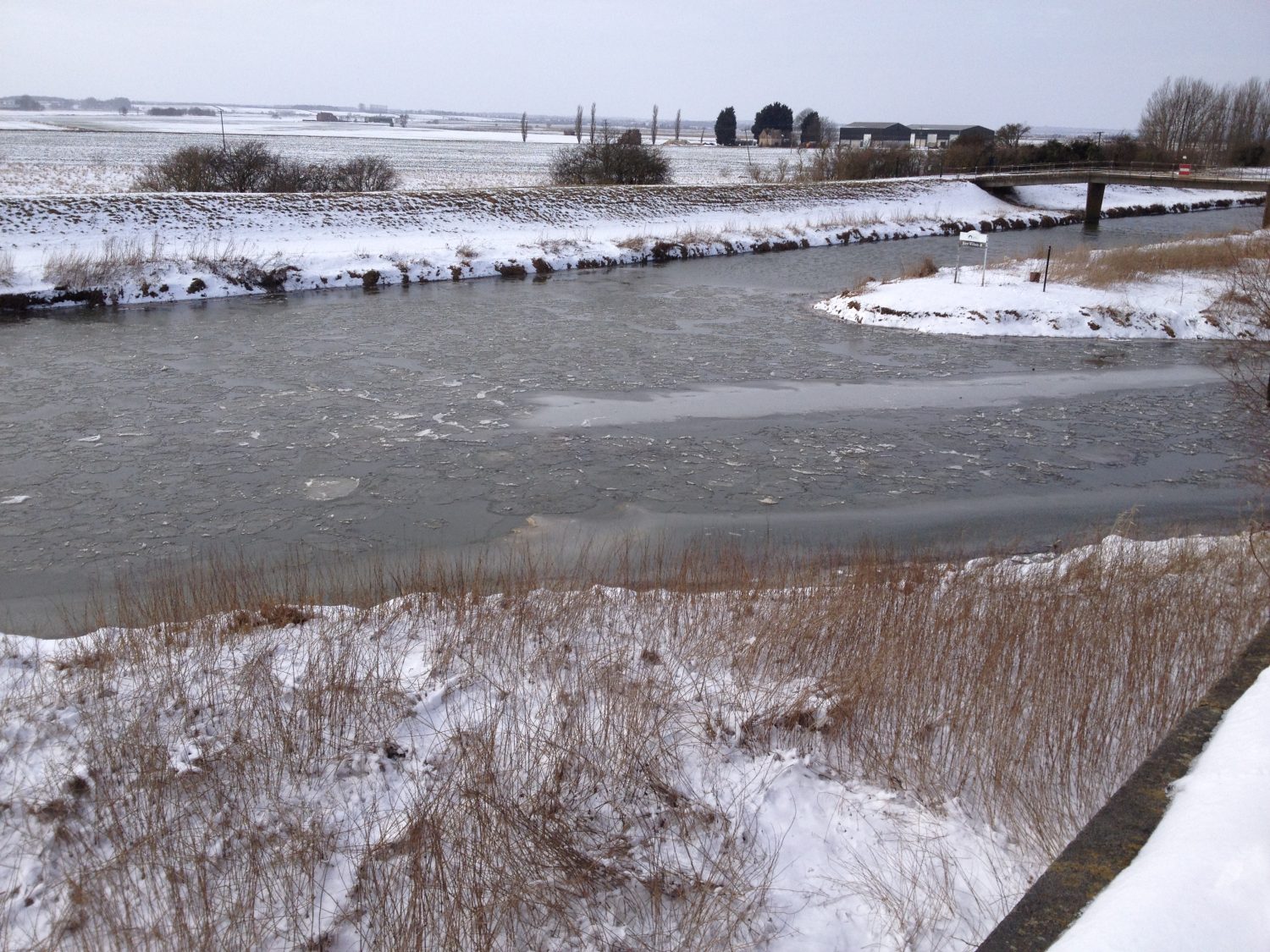 Solid ice on the river still, probably best not to risk losing any more of our bottom blacking! 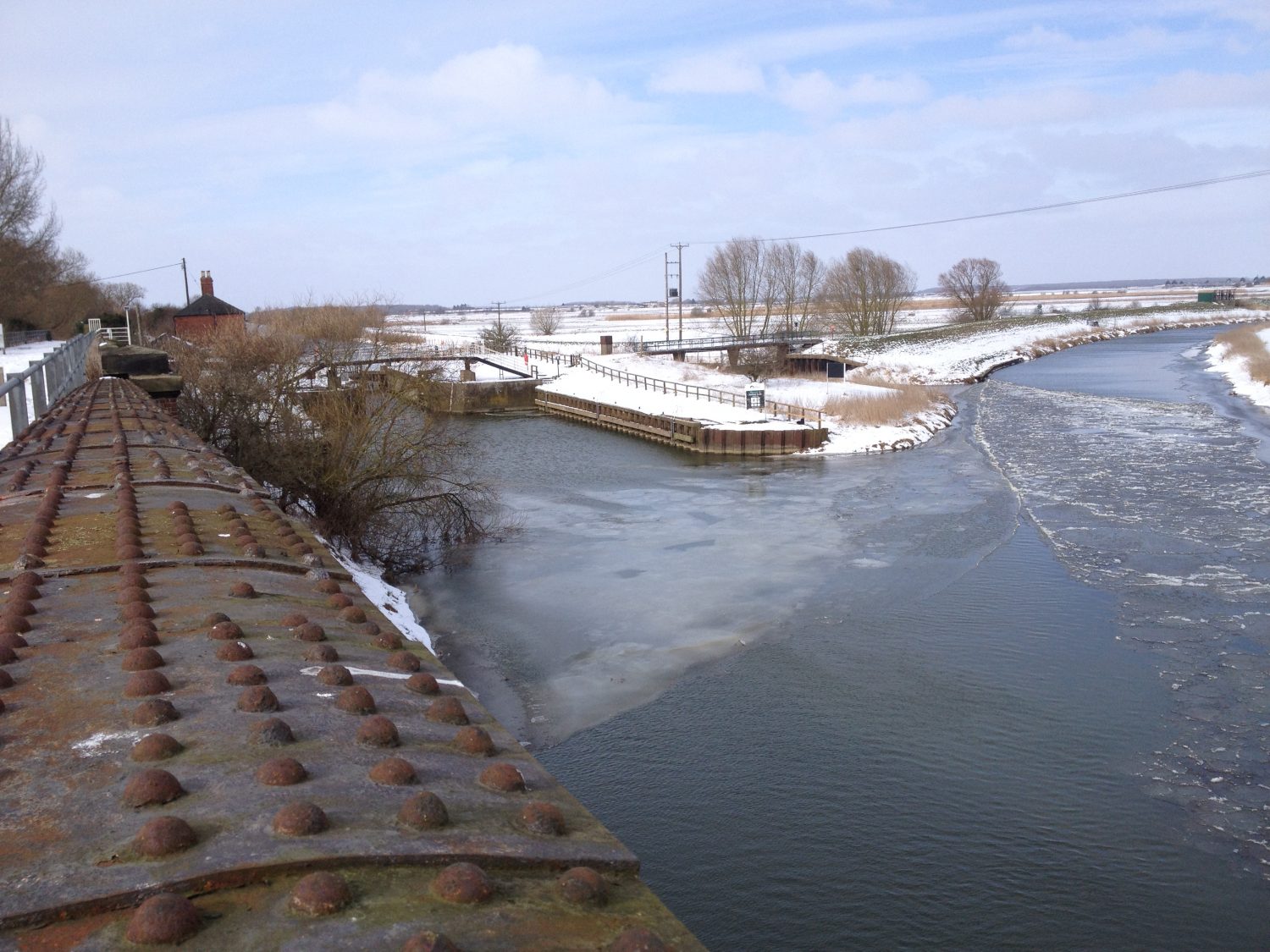 From the railway bridge, looking down onto the entrance to the lock 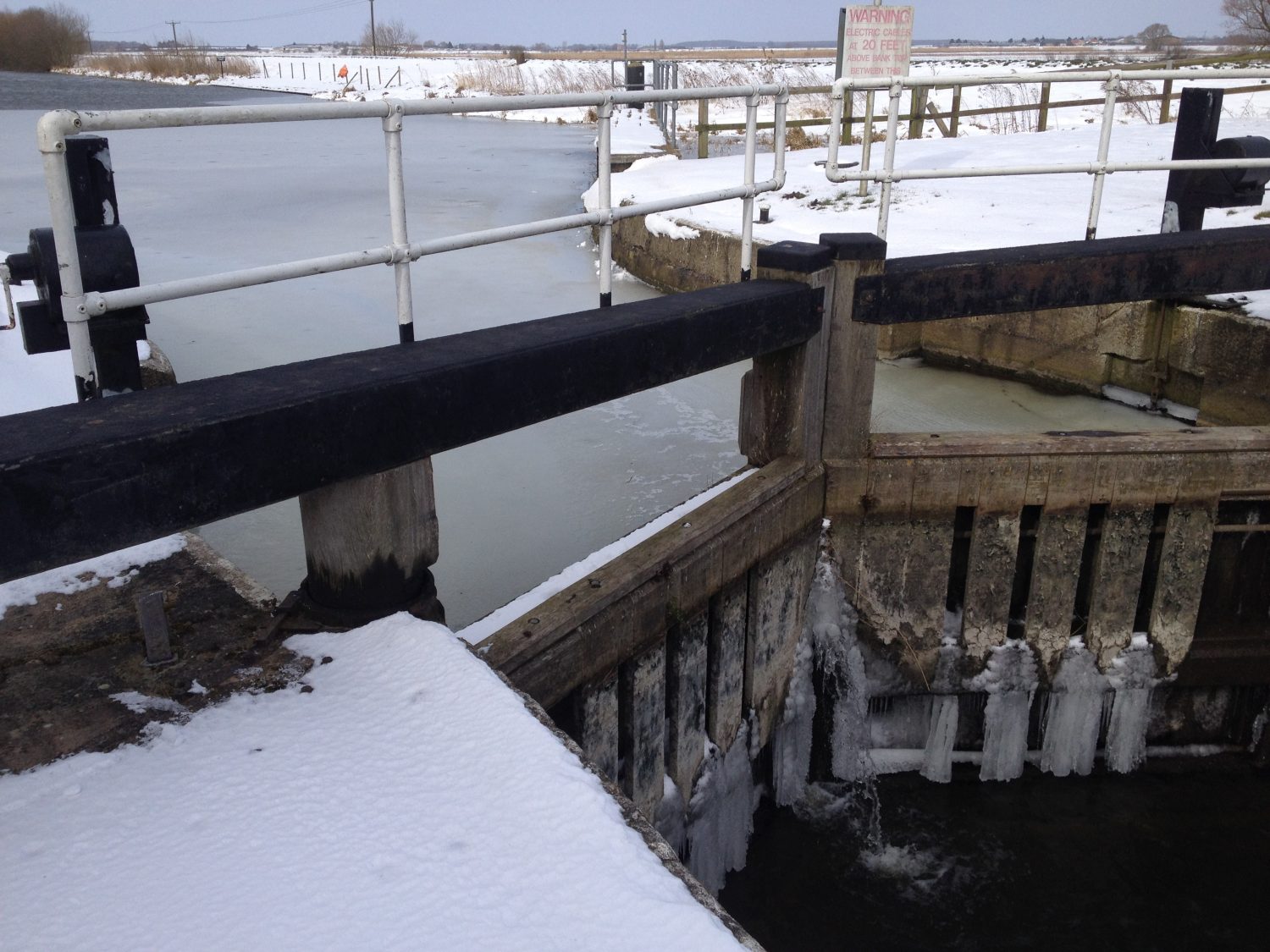 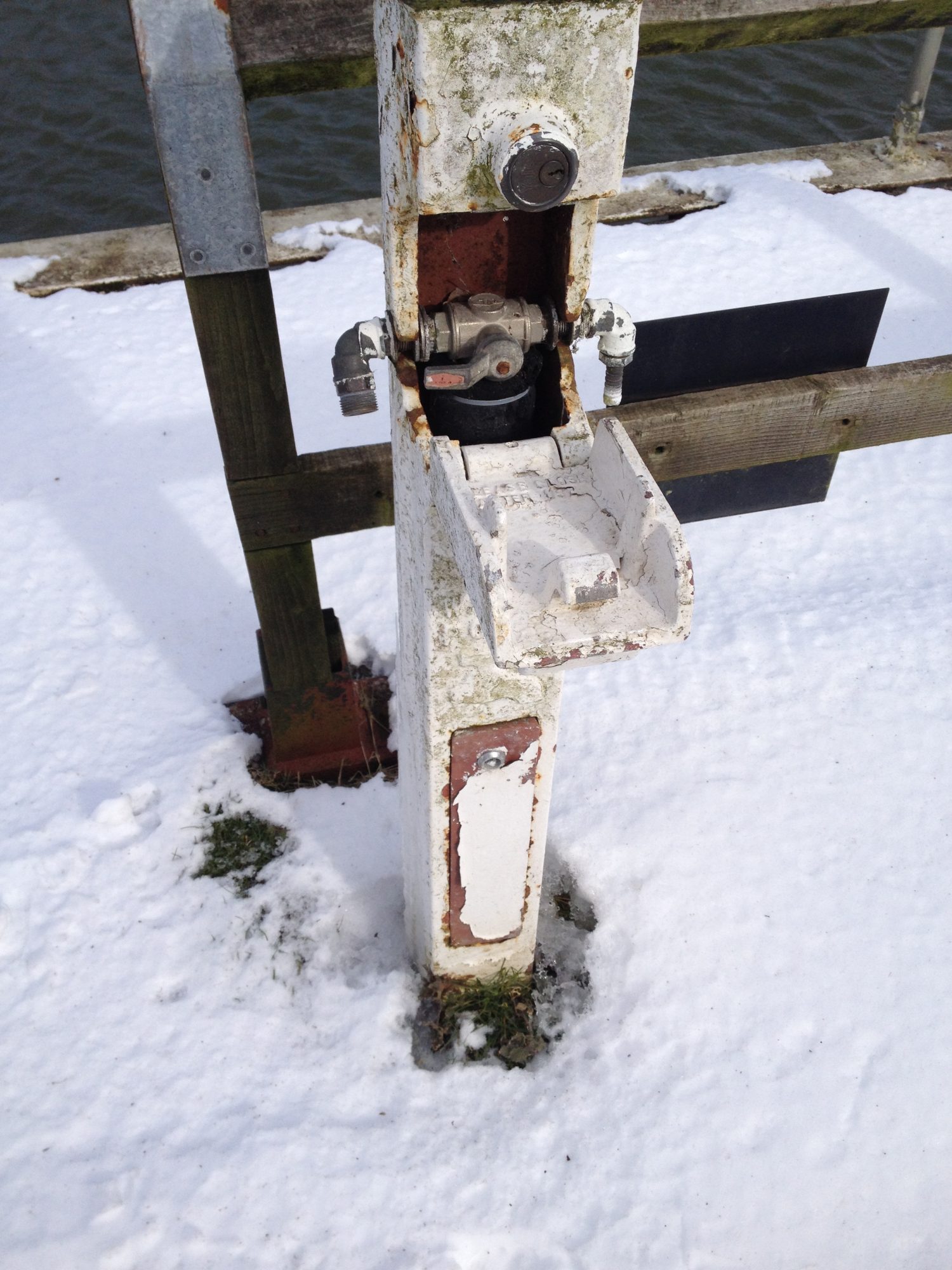 No chance of moving this tap … 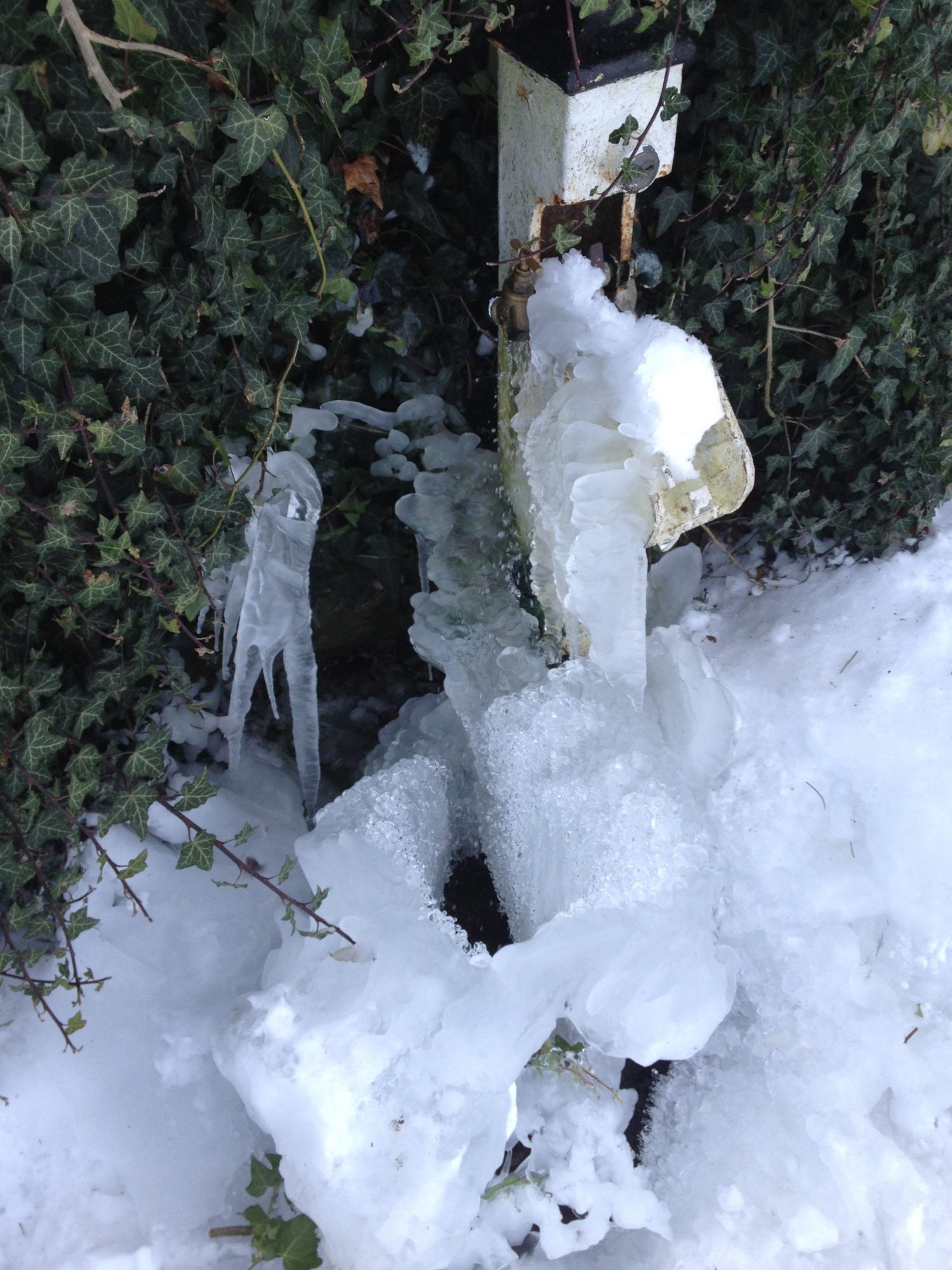 Looks like someone has kept this one slightly open, aiming to prevent it freezing; not sure it’s worked 🙁

Storm ‘Emma’ was apparently responsible for the weather yesterday and today – thankfully it seems she’s moved south, west and north for a while. Though we’re not kidding ourselves we’re out of the woods yet.

But we’re warm. Which is always good. Especially when it’s minus a ridiculous amount outside. And we have a home. We’re definitely not suffering at all. Just a little inconvenienced.

Imagine being homeless in this weather? Someone shared a link on Facebook yesterday which I shared, and downloaded the app for. I’ve often wondered what would be an effective way of trying to help homeless people we see – giving money/drinks/food is just a temporary plaster.  It seems there is a possible way, through an organisation called ‘Street Link’. Please join too, and notify them of any homeless people you see on your travels …

“StreetLink is a national website, mobile app and phone line which enables the public to alert local authorities about rough sleepers in their area. This service offers the public a means to act when they see someone sleeping rough and is the first step someone can take to ensure rough sleepers are connected to the local services and support available to them.”

3 thoughts on “Stranded at Bardney by Emma and The Beast”