We suspect few narrowboats venture as far east as Boston – especially during the harshness of the British winter. Since leaving Nottingham two weeks ago, we’ve only seen two other moving boats, each in quick succession, not far from Saxilby.

As we’re ticking off the few Inland Waterway routes we’ve NOT yet navigated (there’s not many left now), continuing onto the River Witham from Lincoln, as far as Boston, was bound to be on the list. Barry had been regaled with tales suggesting it was a pretty pointless place to visit; nothing to see there they said. Wrong! One evening in The Royal Oak, Tattershall Bridge, on his way there while I was with my daughter, Barry got chatting to one of the locals. He told me he’d told her the word Boston is a Black Country term for ‘brilliant’! Not quite Barry – it’s bostIn, not BostOn! That kiwi accent and interpretations of British accents, gets him into strife at times …

We explored Boston on Sunday, on a spectacularly sunny, azure-blue-sky day, and found it can actually boast quite a variety of attractions – well worth seeing from our perspective. Rather bostin really! Here’s a few we can identify:

~ The River Witham of course! There’s some fabulous residences sitting beside the waterway – producing a very pleasant view from the side-hatch.

~ It’s the origin of some of the Pilgrim Fathers, who set sail on ‘The Mayflower‘ in 1620, founding one of the first European colonies in North America settling in Massachusetts – now known as Boston USA.

~ The parish church of St Botolph and The Boston Stump – the church is the largest in the UK (at least that’s what it states in the church; online sources suggest it’s “… one of the largest …”). The Stump is undoubtedly a magnificent landmark, its prominence announcing the presence of Boston for miles around. The landscape’s so flat in this part of the country, enabling it to be easily spotted.

~ The Maud Foster Windmill – a wonderful example of a working windmill – and a holiday let.

~ A variety of outstanding architecture around the town.

We’d been eagerly anticipating walking up the Stump and marvelling at the views, only to discover Sunday appeared to be the only day it wasn’t a possibility (as you’ll see the signs clearly stated)! It’s such a rarity to have brilliant blue skies in England, without a cloud in sight. Barry returned on Monday afternoon to try again, only to be informed due to the weather conditions the Stump wasn’t safe to ascend. He declared his annoyance, informing them we’d visited the previous day and it was closed, and was informed it is open on Sundays – from 1pm to 3.30pm! He suggested they may consider adjusting their signage, as they were quite clearly losing money from people who would’ve paid their £5 a time if it was accurate.

What a wasted opportunity.

To be honest though, after considering it further, it’s a narrow spiral staircase, and would take a tremendous amount of energy to climb up (and down!), and I’d probably feel a little claustrophobic. At least that’s the message I’ve now given myself to get over not being ‘allowed’ to gaze into the distance from the ramparts.

Maud Foster Windmill and a walk around Boston

War memorial gardens are always a poignant place for Barry, as his maternal grandfather and his father fought for Britain in the First and Second World Wars – it’s strange (and frankly ironic) how he now has to struggle so much, and spend a great deal time and money,  just to have the right to stay longer than six months in the country his near family fought to defend, and that of his wife’s birth! Ah well. It is what it is. We don’t make up the rules. We just have to make sure we can tick all the ‘boxes’ to satisfy the powers that be …

As an amusing aside, some time ago we were walking somewhere else and saw a sign exclaiming it was ‘residence parking only’. I wish I’d taken a photo! We saw another classic in Boston, and this time I DID capture it for posterity – though a hand-written one can be simply changed, the previous one was properly made and erected … 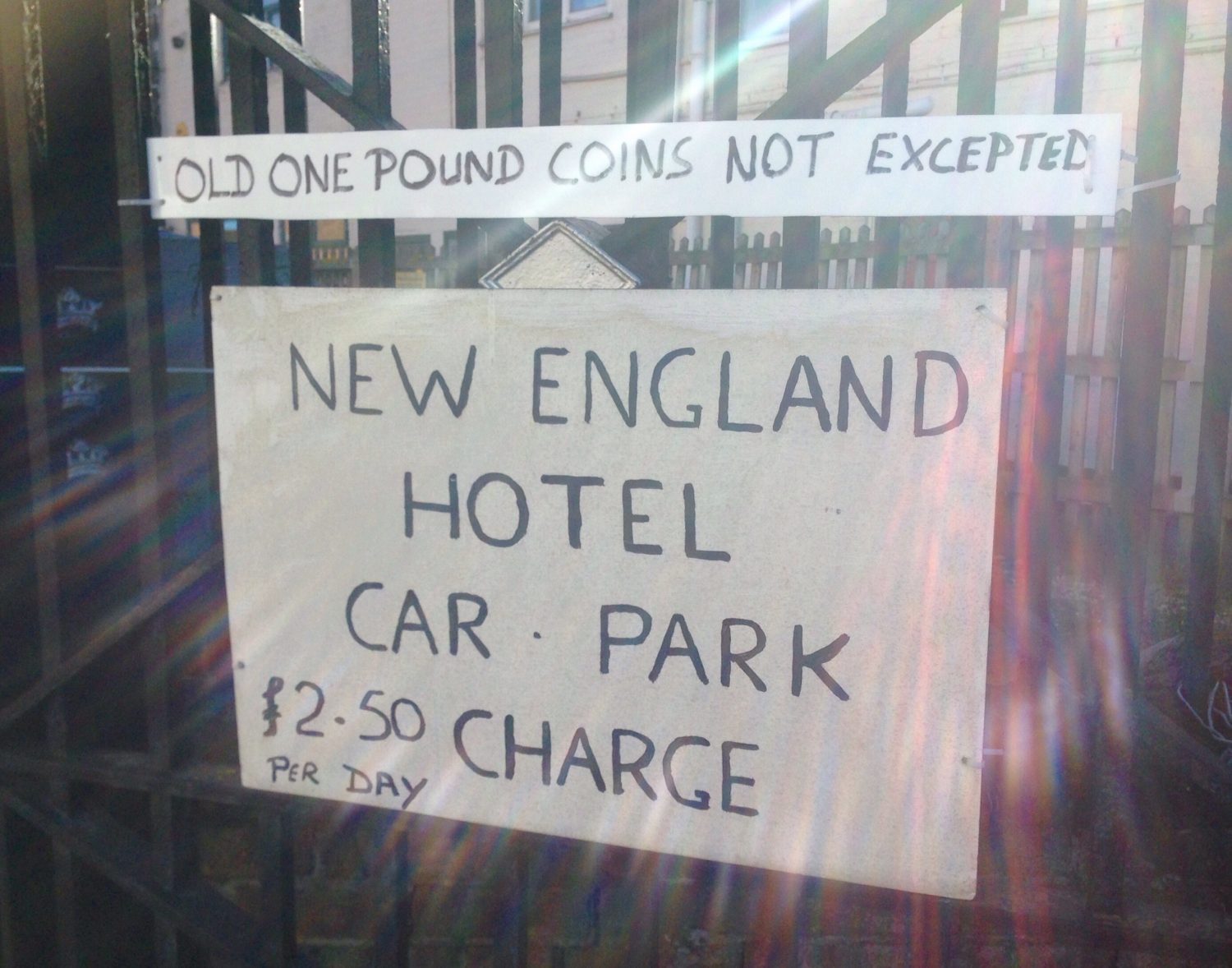 Can you spot the glaring error??

One of the purposes of returning to Lincoln, was to catch up with our friend – another Barry. He visited us on the boat in Lincoln when we first arrived. Then the two Barry’s got together while I was with Lisa.  And on Sunday night he drove from his home in Metheringham, to Boston, and scooped us up. We went out for dinner at his local pub, followed by a sleepover and returned to Areandare the on Monday morning.

Sourcing a new camera for Barry 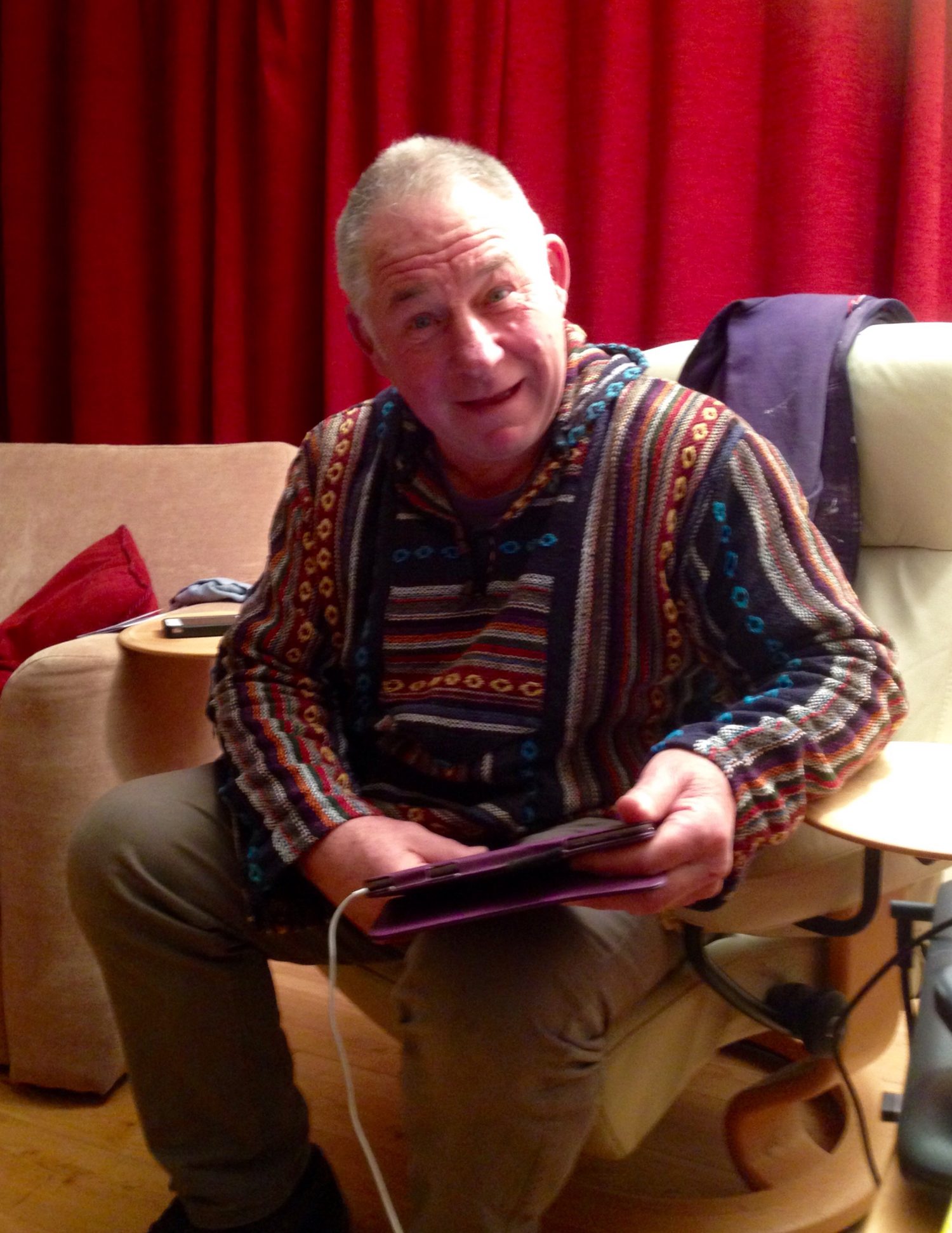 Barry bidding at the E-Bay auction

It’s rather fortuitous that Barry’s camera chose now to lose the energy to function. Being nearby the other Barry for a few more days, Barry’s been searching for a suitable and affordable replacement. He had two separate bids on E-Bay auctions on Sunday night – but was out-bid at each. He’s now bought a different one, paying the price stated rather than continuing to attempt to out-bid others and losing the opportunity to have it posted to Barry’s, so he gets it this week.

This one is more of an upgrade, consequently more outgoings, but it’s totally worth it to continue taking excellent quality images. Though to be honest, the camera is only part of the picture! It’s the person TAKING the photo that counts, not spending hundreds of pounds on the flashiest new model.

This morning we did an about turn and began the journey back to Lincoln. It’s doubtful we’ll ever be back in Boston, but if you click on this link, you’ll see a video of the ascent and views from the Stump.

The reported ‘Beast from the East’ rather front keeps appearing and disappearing. You’ll notice the differences in the sky below …

And here’s a few images taken from, and of, Areandare over the past few days, also portraying the current unpredictability of the elements …

We’re now moored up just past ‘Dogdyke’ (there’s some fascinating place names in these parts!) at Tattershall (old) Bridge, hoping to visit Tattershall Castle in the morning before continuing our journey westwards. We’ve checked the opening times and unless someone is out to stop us seeing this as well, it’s open from 11am to 5pm!