We last visited Robin Hood’s fair city in 2009, aboard Northern Pride. Friends arrived at the station to spend a long weekend with us – which for some reason I can’t recall, entailed moving swiftly through rather than  exploring the history and many delights of the area.

This time, Barry’s determined to take a better look around what’s on offer.

We arrived Tuesday evening, spending the first couple of days thankfully catching up on a few things. Importantly Barry finished painting the walls of our lounge and kitchen (two coats on top of the undercoat already completed whilst I was away), and I hung our ‘newly made at mum’s’ (apart from the hems, a chore I dislike intensely!) curtains. I think it’s looking splendid; bright and colourful, and feel pleased how much more pleasant it now is than being completely surrounded by brown wood. 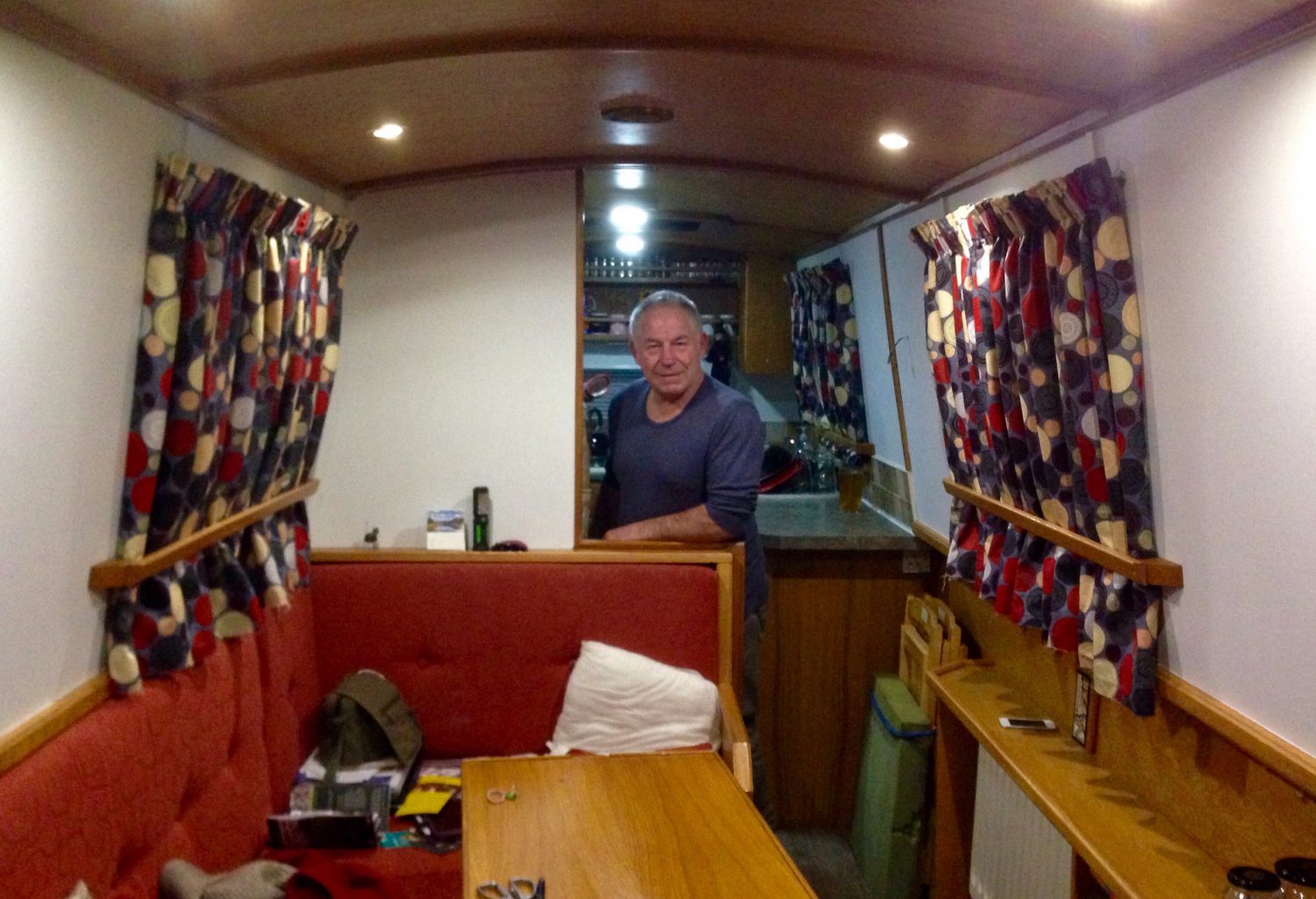 It’s also meant we’ve been able to find a perfect space for ‘A Bridge for all Seasons‘. This beautiful collection of woodblocks is painted by our talented friend Jan Vallance, from ‘The Art Boat‘, and I’d bought them for Barry for Christmas in readiness of our redecoration. 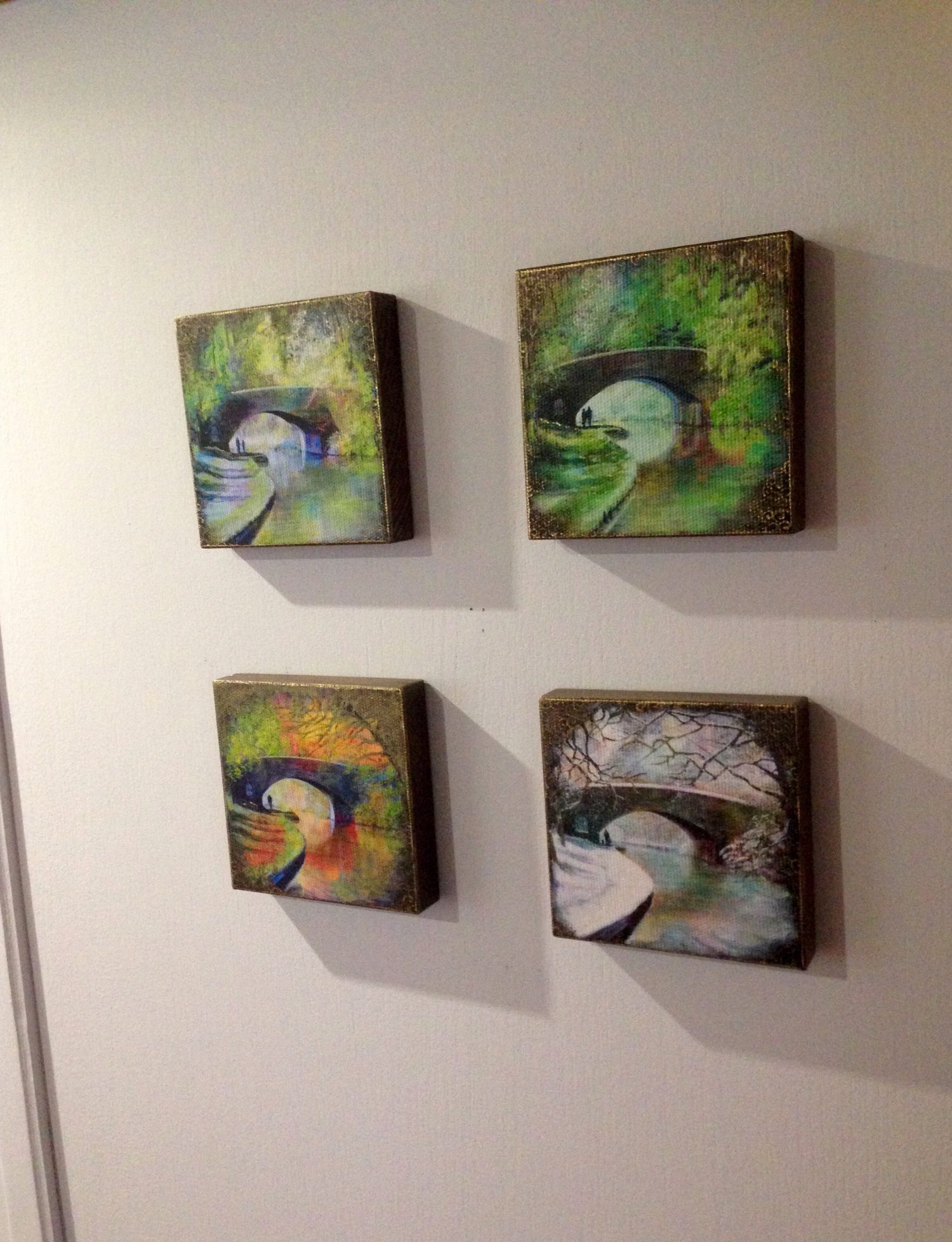 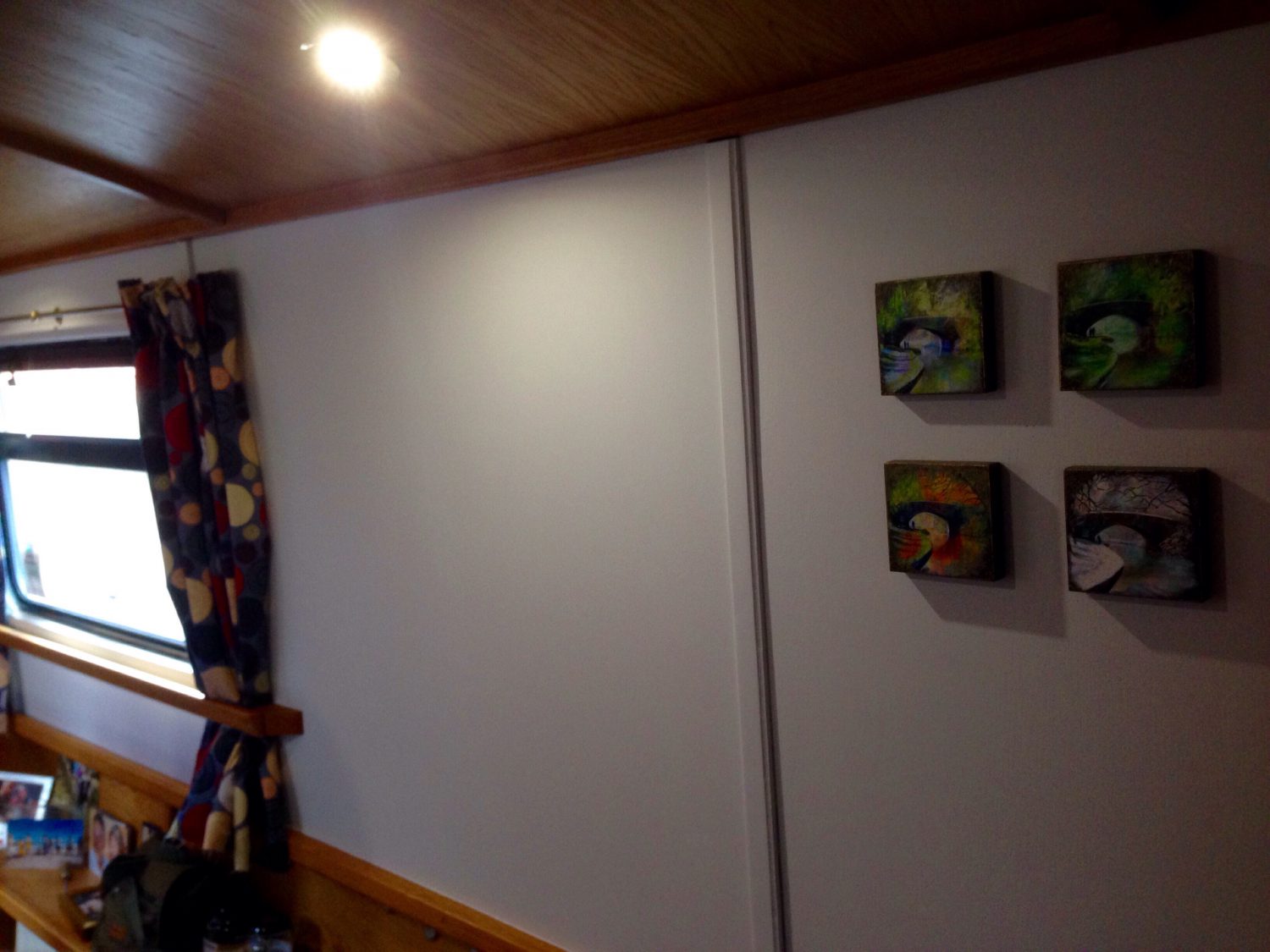 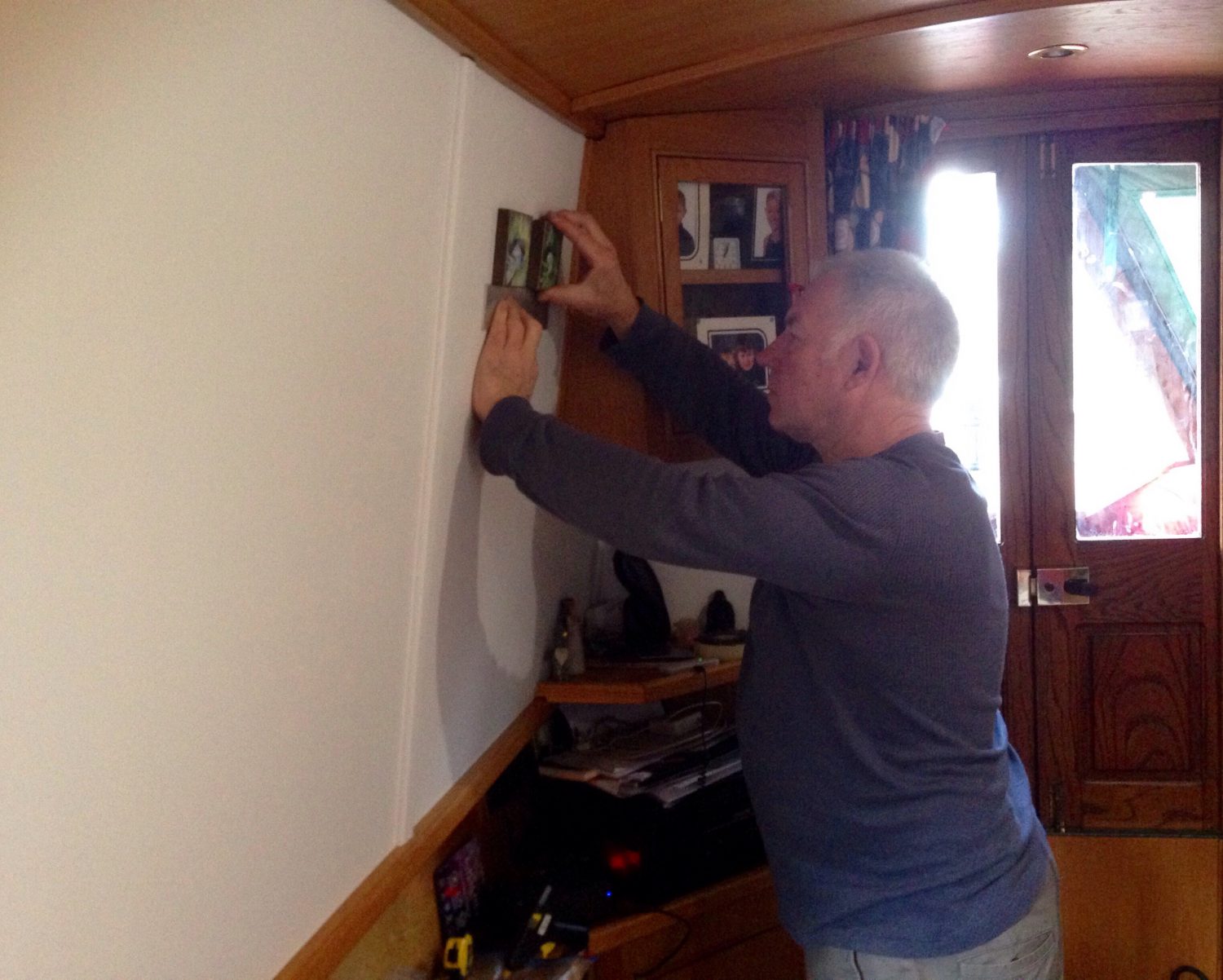 Removing myself from the boat on Thursday while Barry painted, I walked into town and found their Information Centre – aptly named ‘Nottingham Tourism Centre‘. Here I collected a few leaflets of attractions I’d heard Barry say he’d like to see while we’re here. He read through them that evening, and spotted in not one but two leaflets, that we’d fortuitously arrived at the optimum time for a ‘one night of the year only’ event – on Friday 10th February.

Understandably thrilled, we planned our whole day around being at Nottingham Castle by 3pm yesterday, in readiness for their annual ‘Light Night’ (and importantly free admission!). 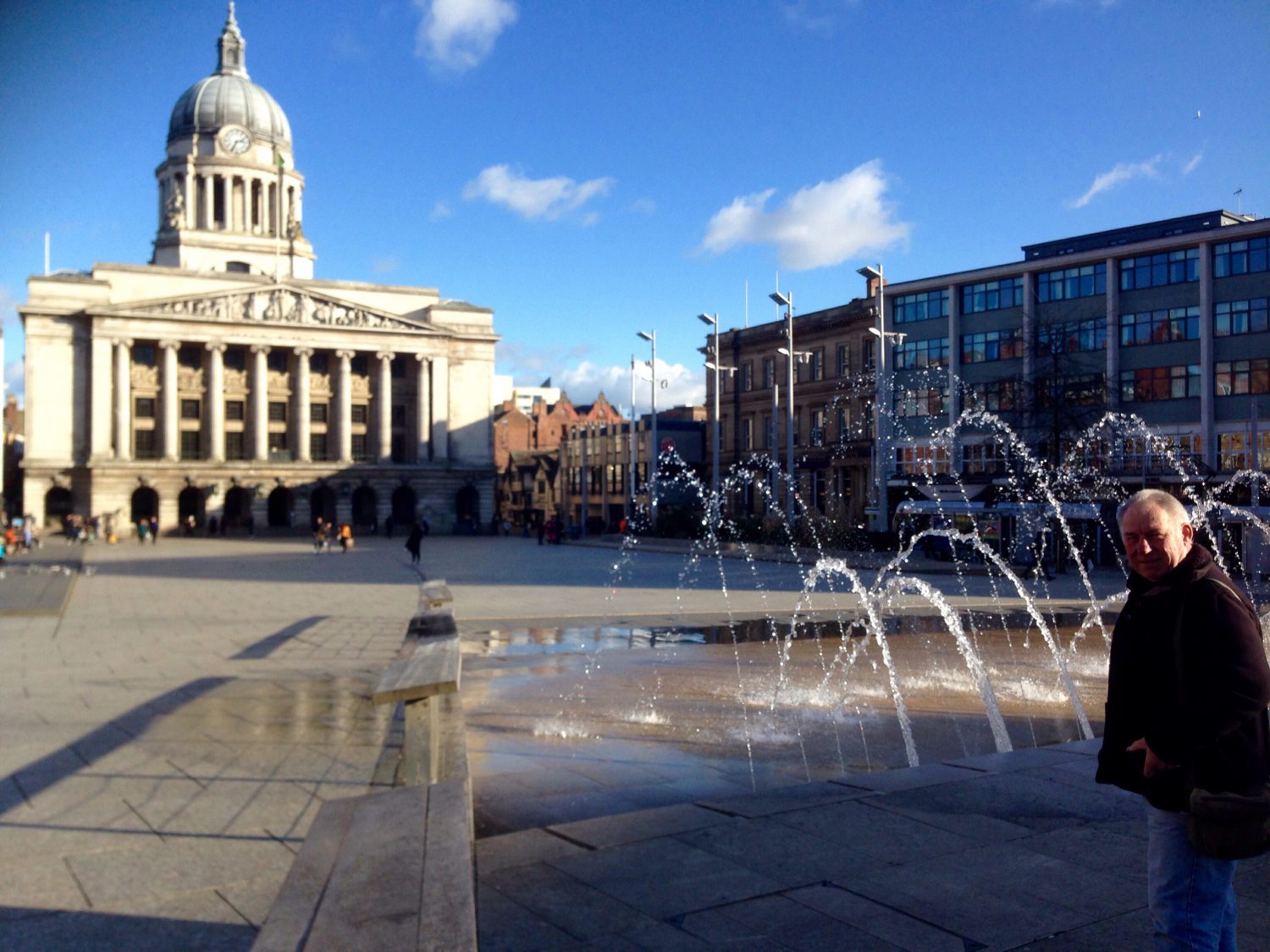 The town centre with fountain and tram-line 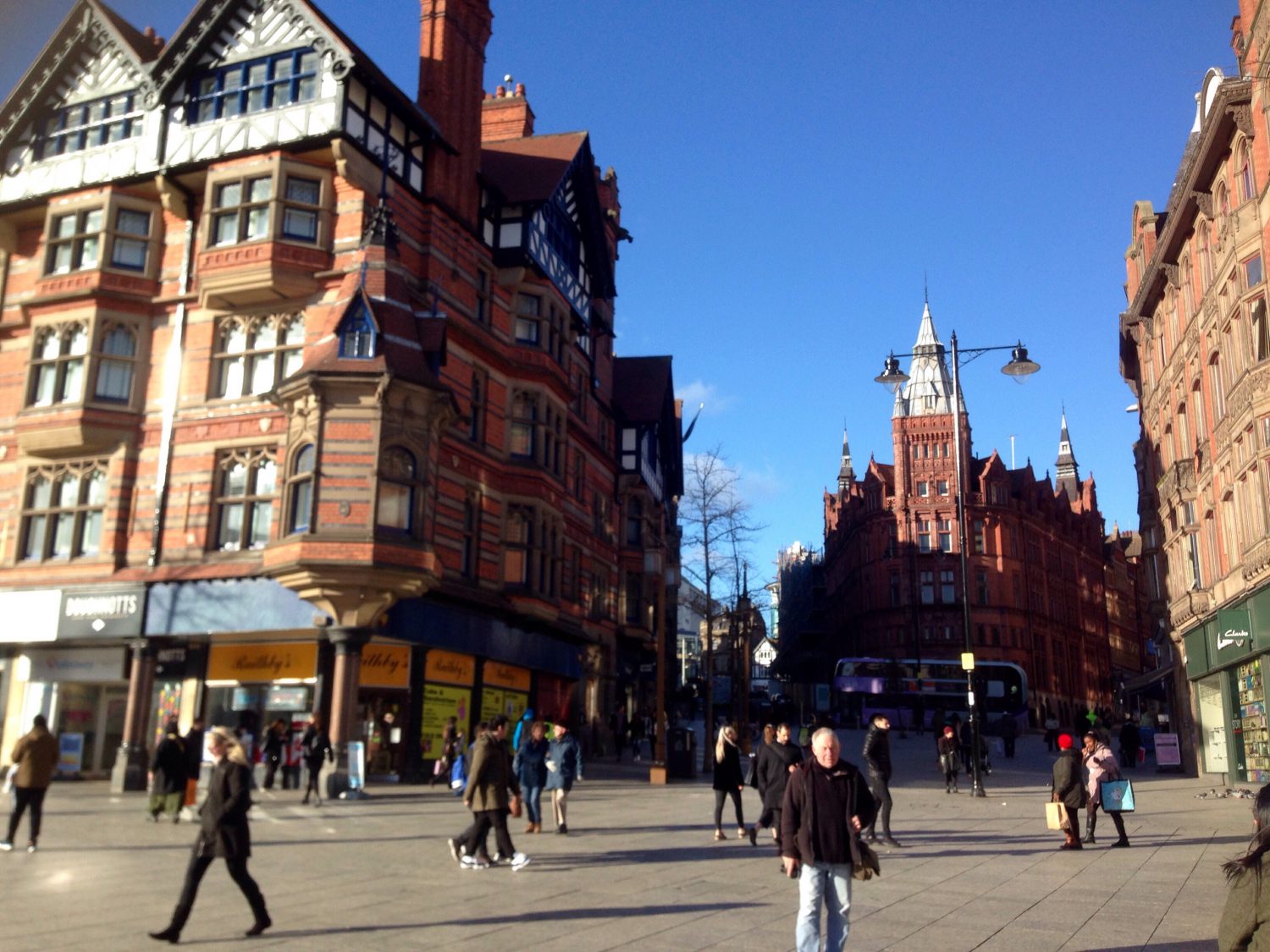 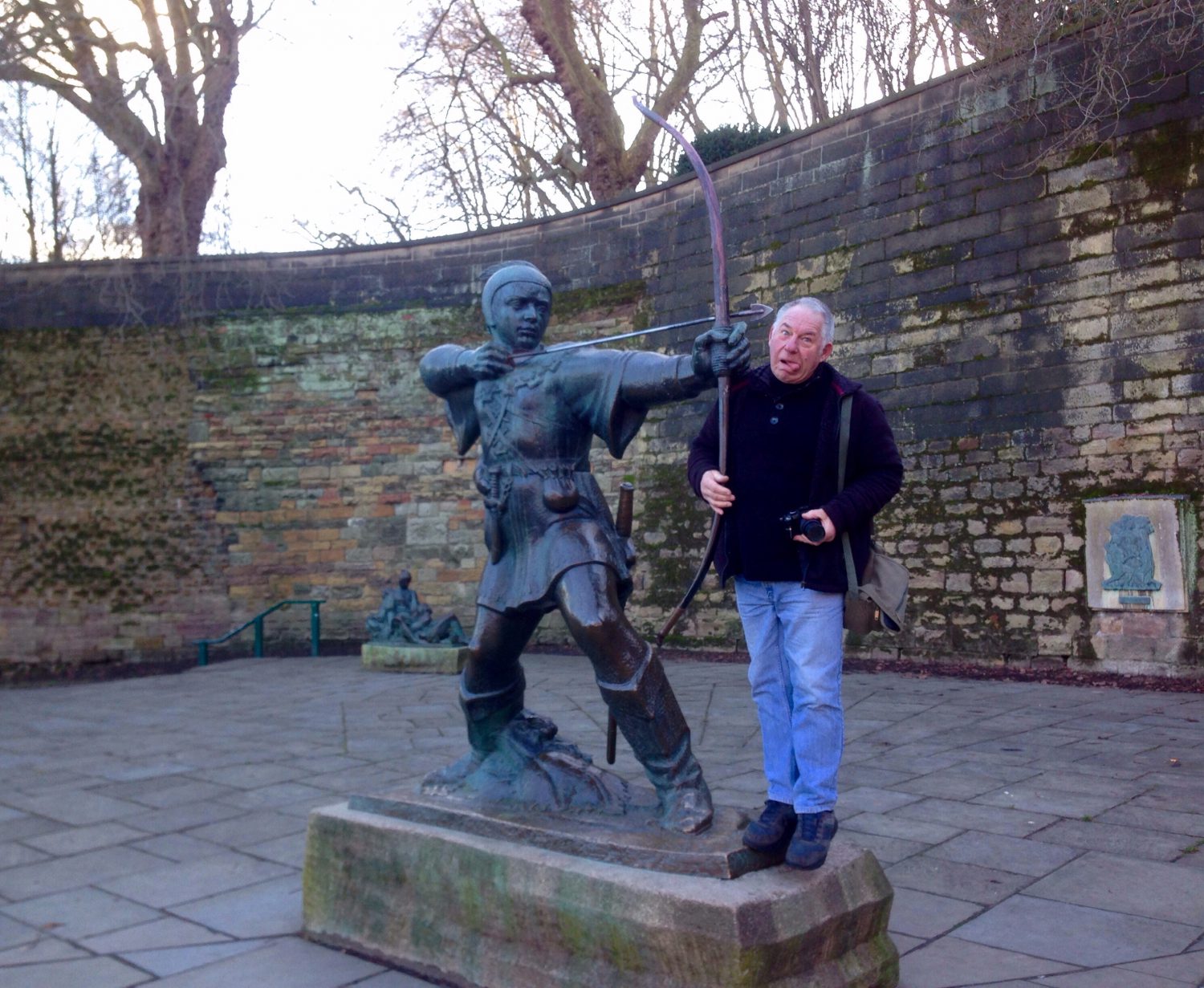 We were a tad puzzled when activity around the Castle was sparse, but there appeared to be a handful of people also looking for a way into the Castle. We eventually discovered last entry was at 3pm, and ‘Light Night’ this year isn’t until 23rd February, so we arrived two weeks too soon. To say we were disappointed would be an understatement.

We verbally expressed this to the puzzled attendant at the gate, stating we’d read it was THIS night from information from the Tourism Centre. Thinking we’d read it incorrectly, we checked on returning to the boat. Well yes and no was the answer … 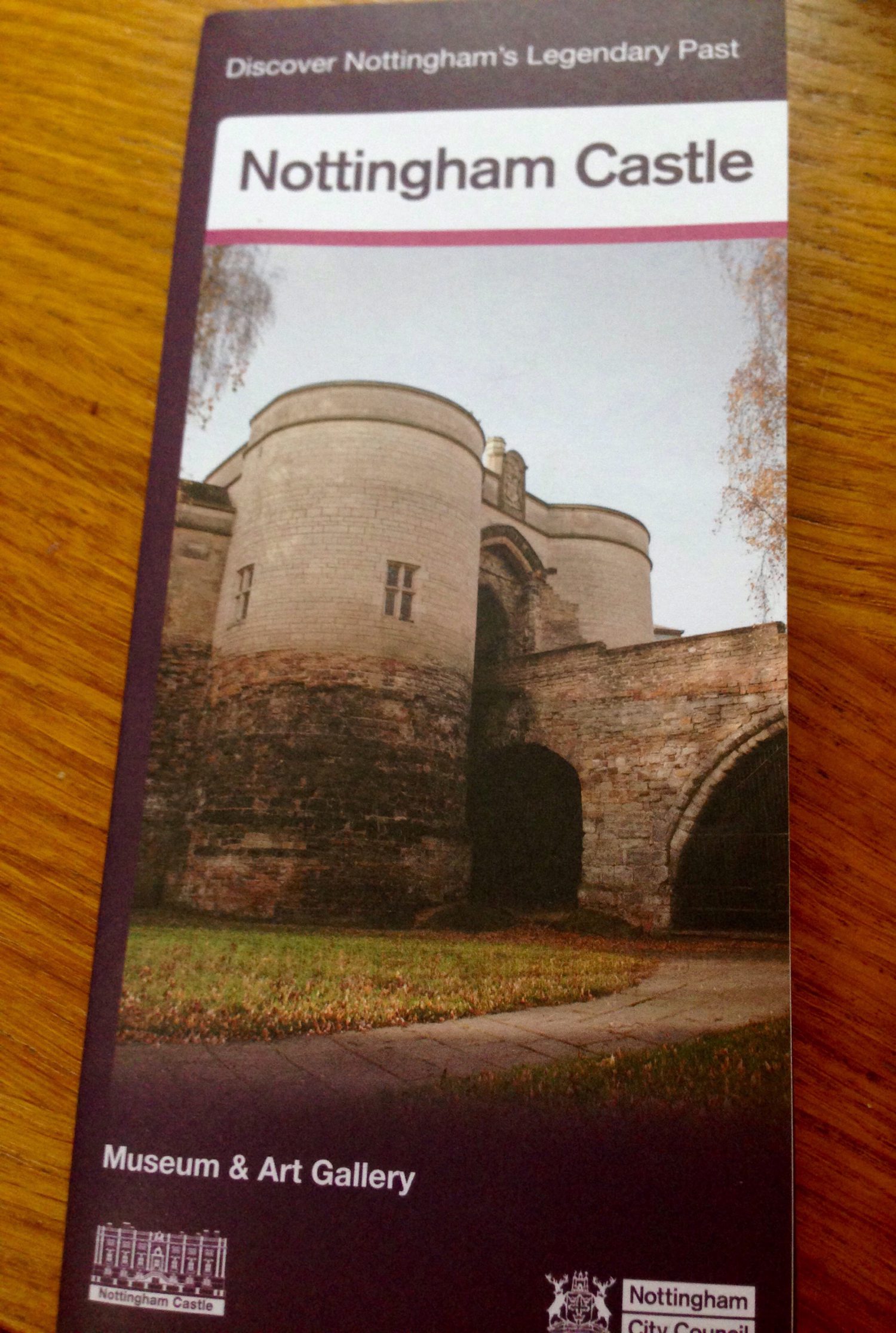 The leaflet from the Tourism Centre (undated!) 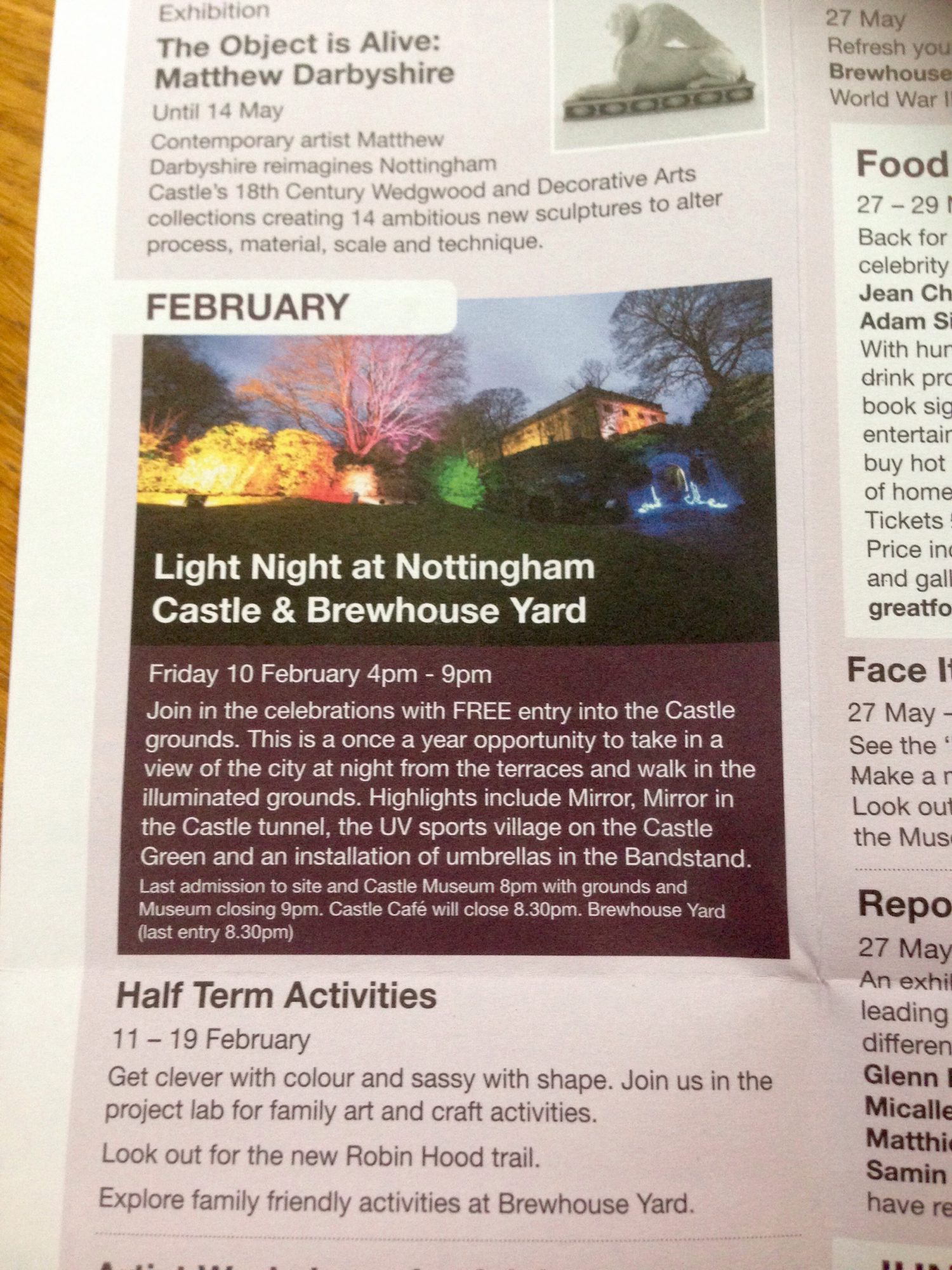 The entry about the Light Night

On reflection the date is 10th February in the above publication. However … 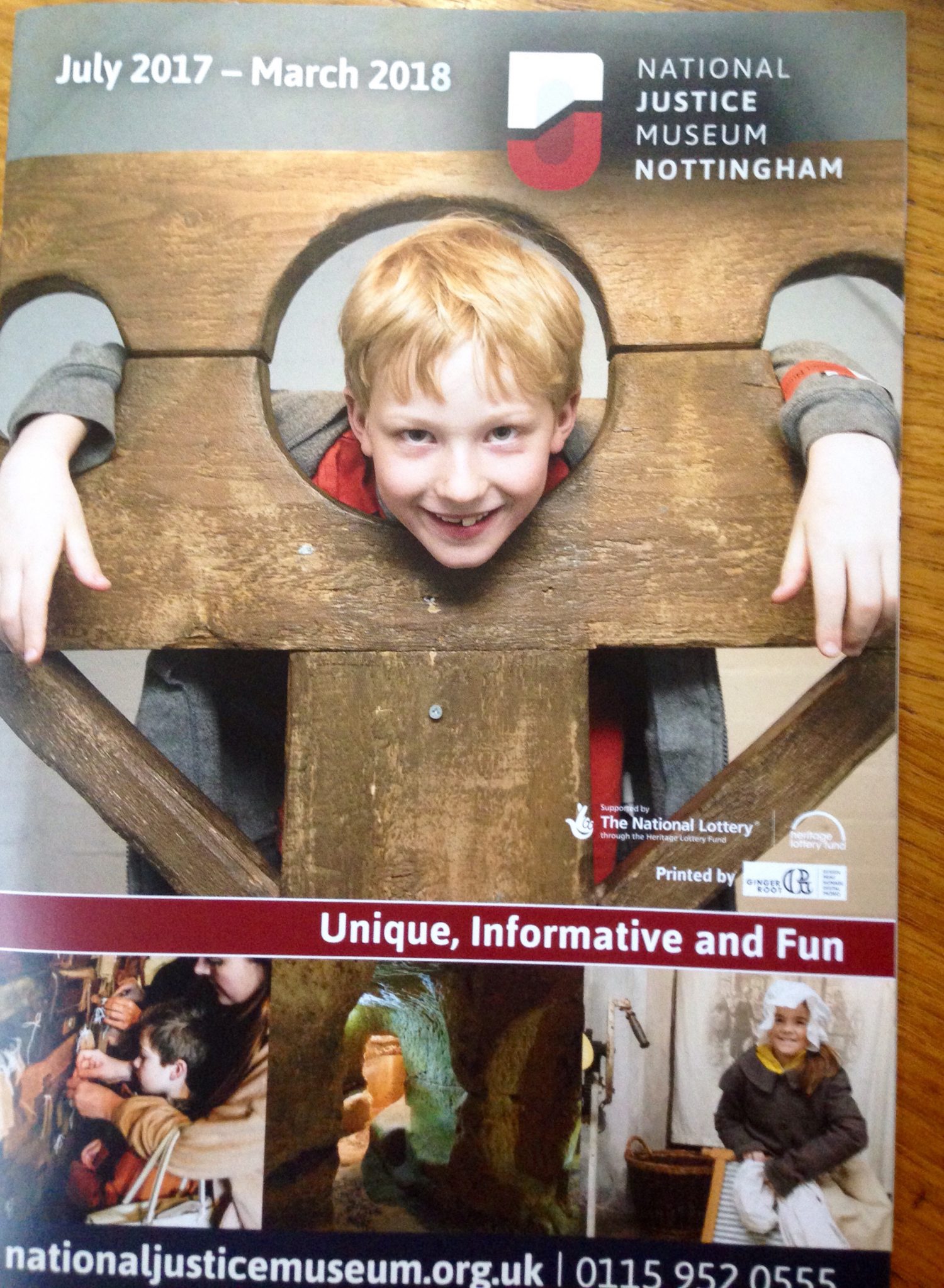 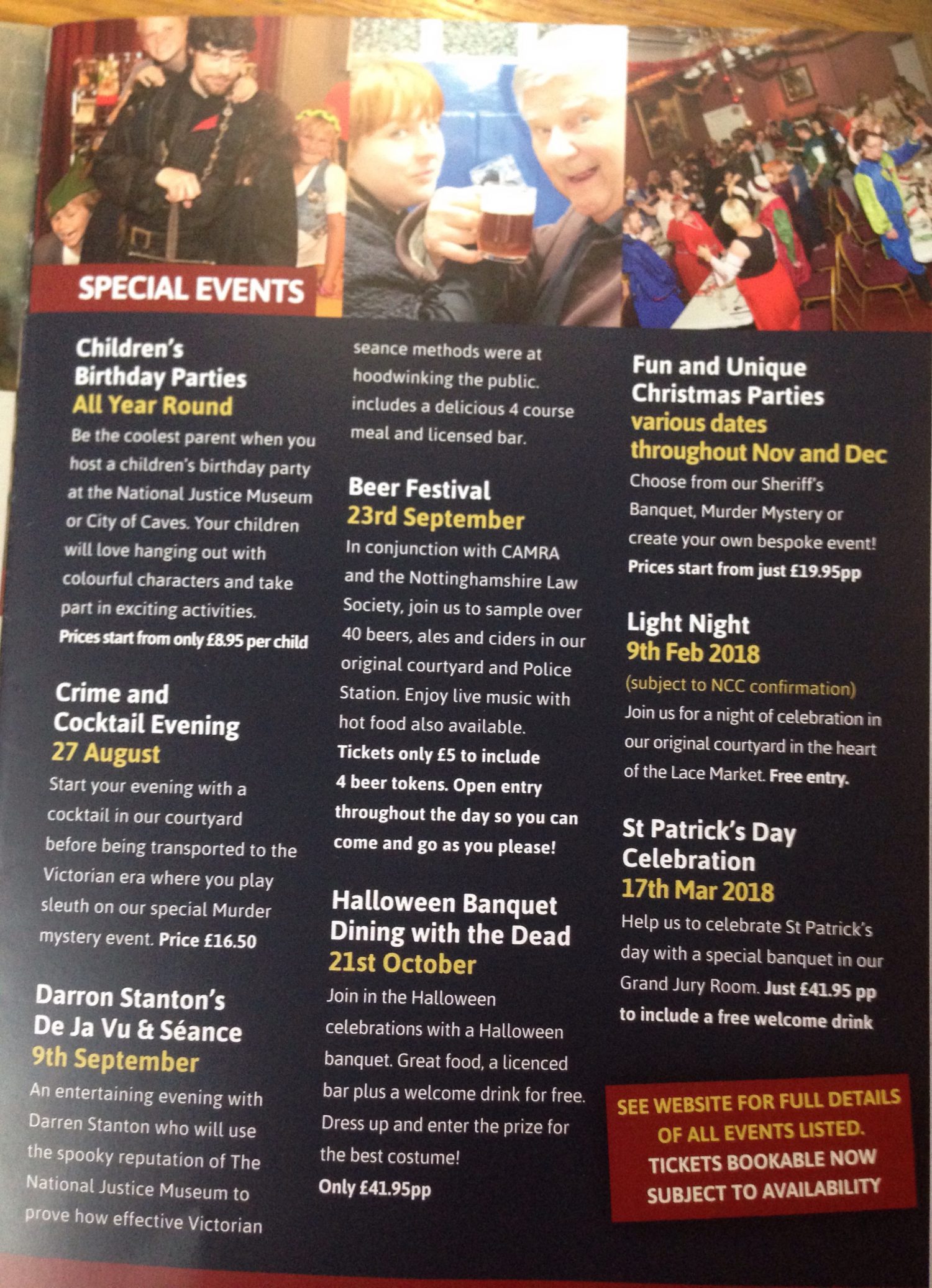 It’s likely there’s a sound explanation for the confusion, but it doesn’t help us as we won’t be in the area on 23rd. Ah well, that’s life I guess.

We’re imagining we’re not the only people who’ve been fooled and disappointed. It was such a pleasant day, with a clear evening, and would’ve been magnificent conditions. Today it’s dreary and raining, so a Castle visit was ruled out. Maybe on Monday …

A Trip to Jerusalem

Walking down the hill from the Castle we came across another important landmark – and one very close to Barry’s heart. History AND alcohol!

‘Ye Olde Trip to Jerusalem‘  is reputedly the oldest Inn in England – originating in 1189AD (though there’s no documentation to verify this!). It’s said it was the meeting place of Richard the Lionheart and his men, before their crusade to the Holy Land, hence the name. However this also can’t be verified. But the story’s interesting nonetheless, and the building fascinating with its many nooks and crannies, built into the caves at the bottom of the Castle grounds and filled with memorabilia to delight tourists and locals alike.

Hopefully the visit won’t lead to a pregnancy as threatened (see below!) – though we could certainly make our fortune if it does! 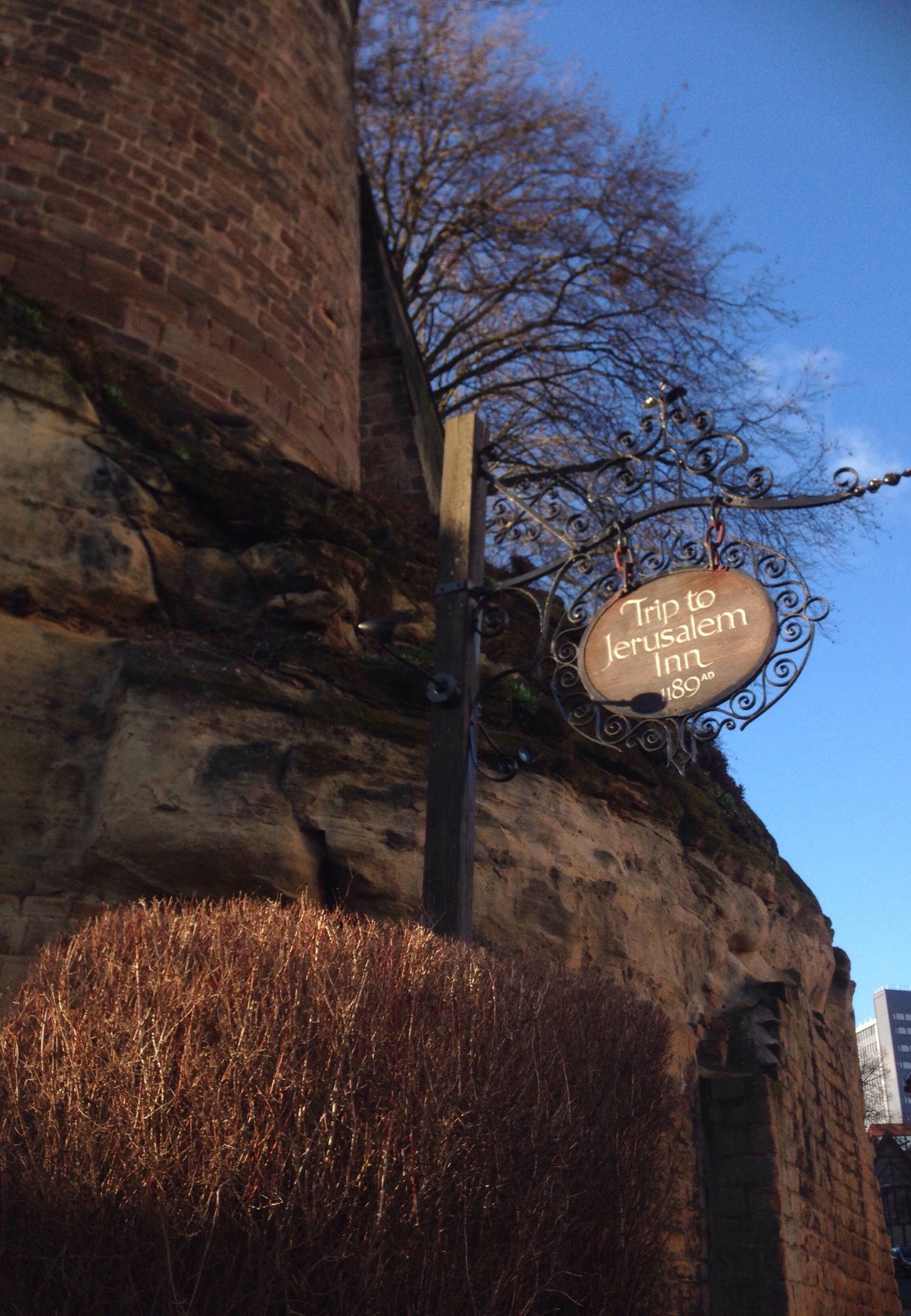 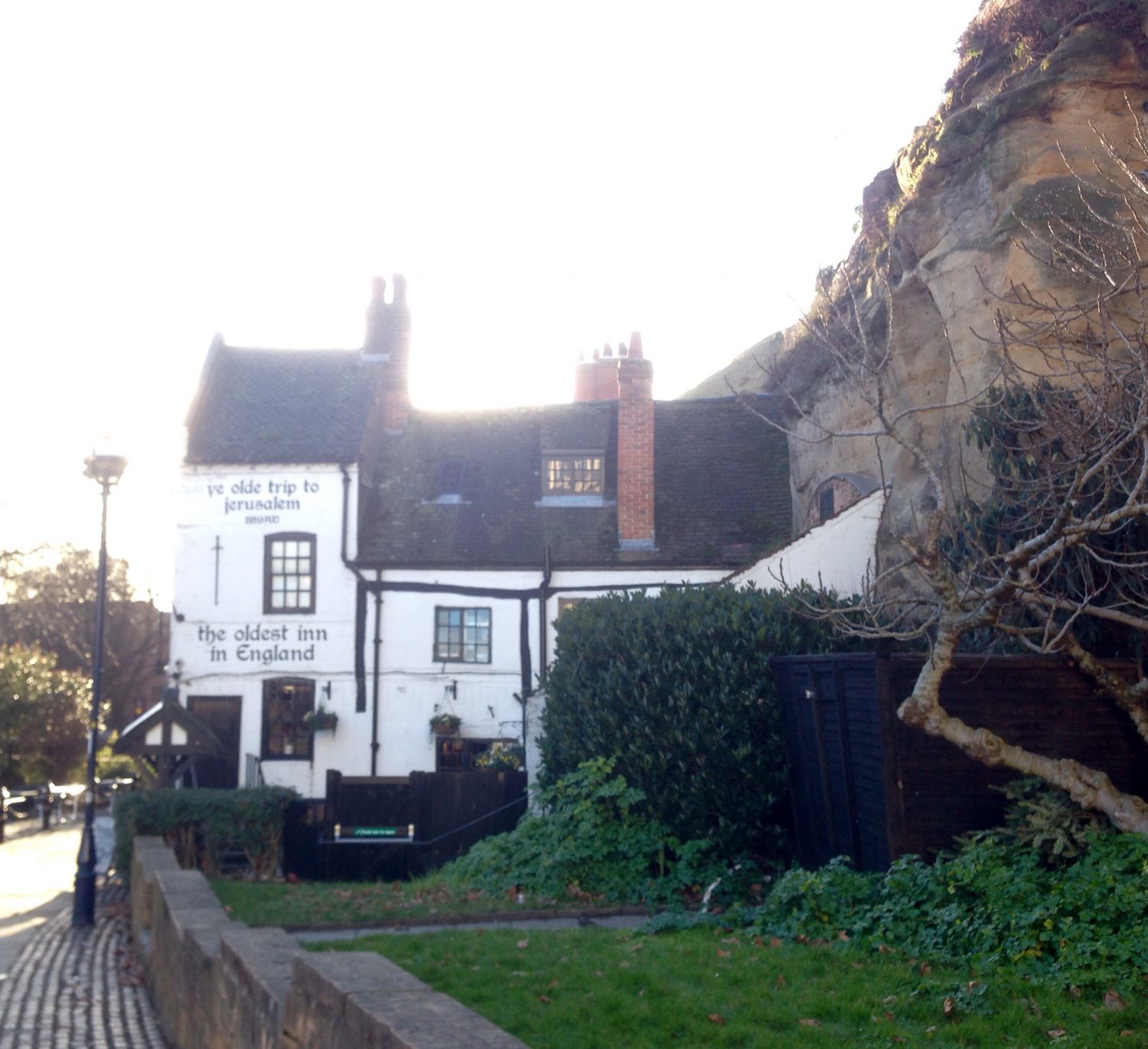 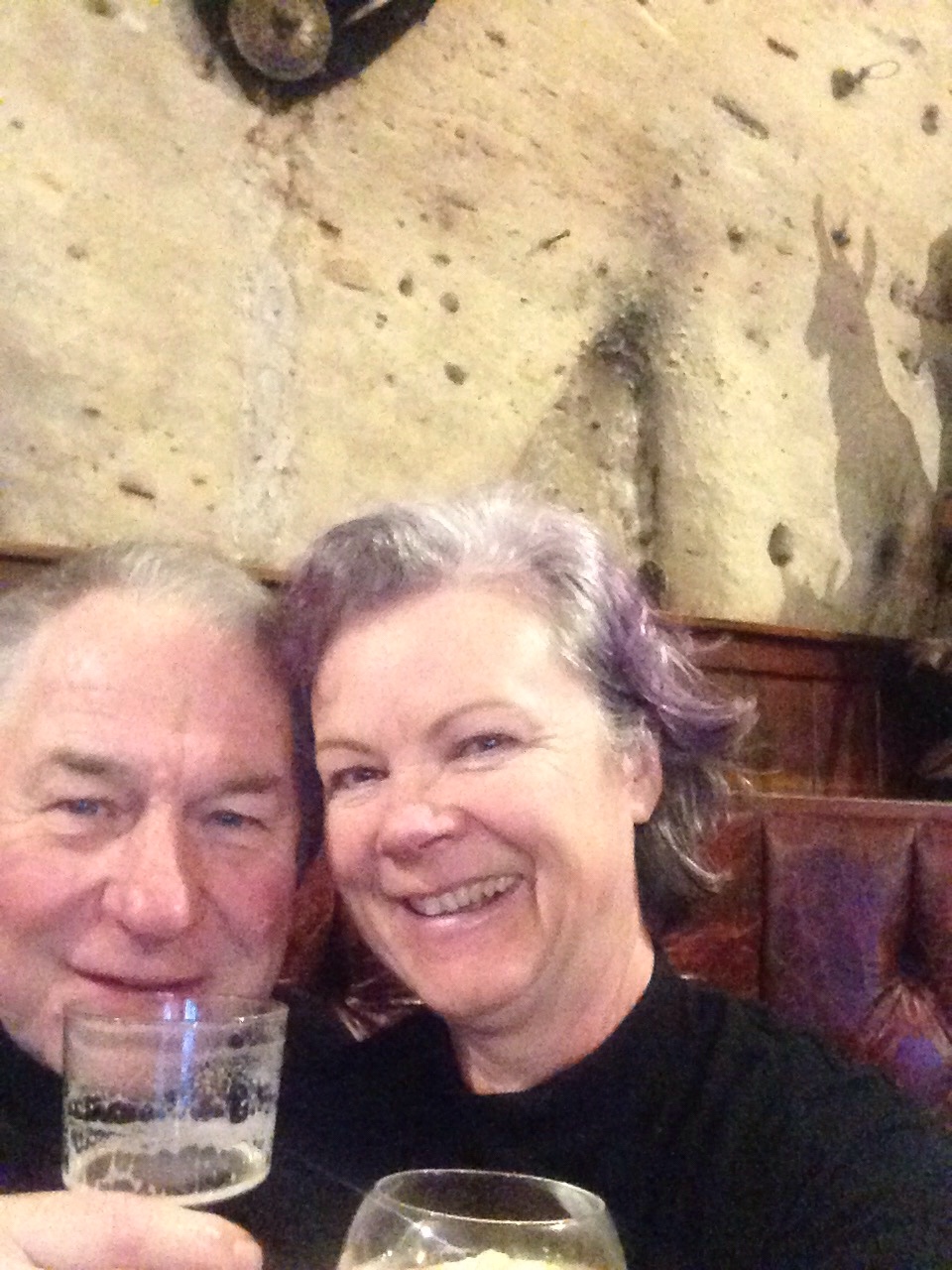 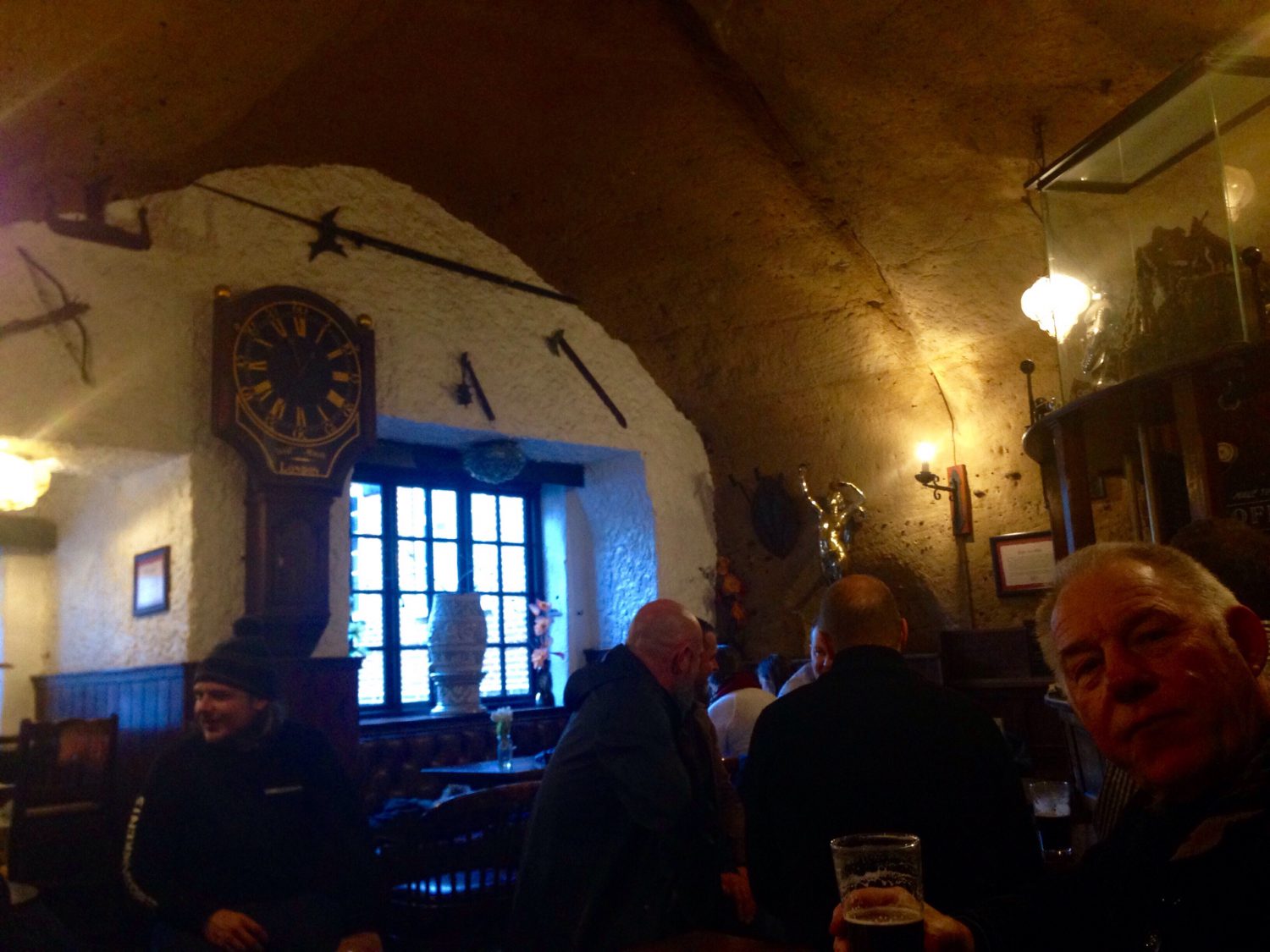 Comfortable seating in the cave 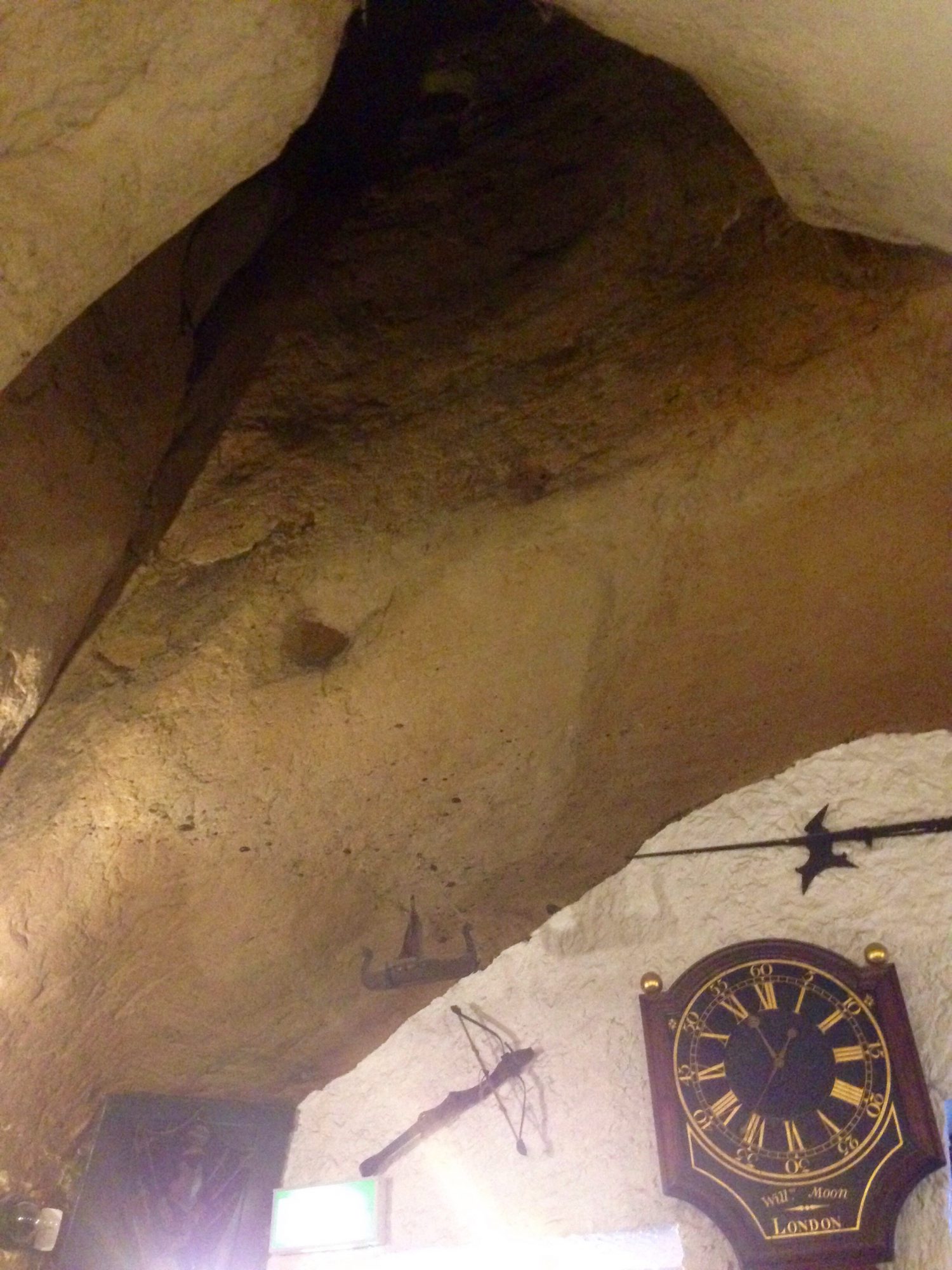 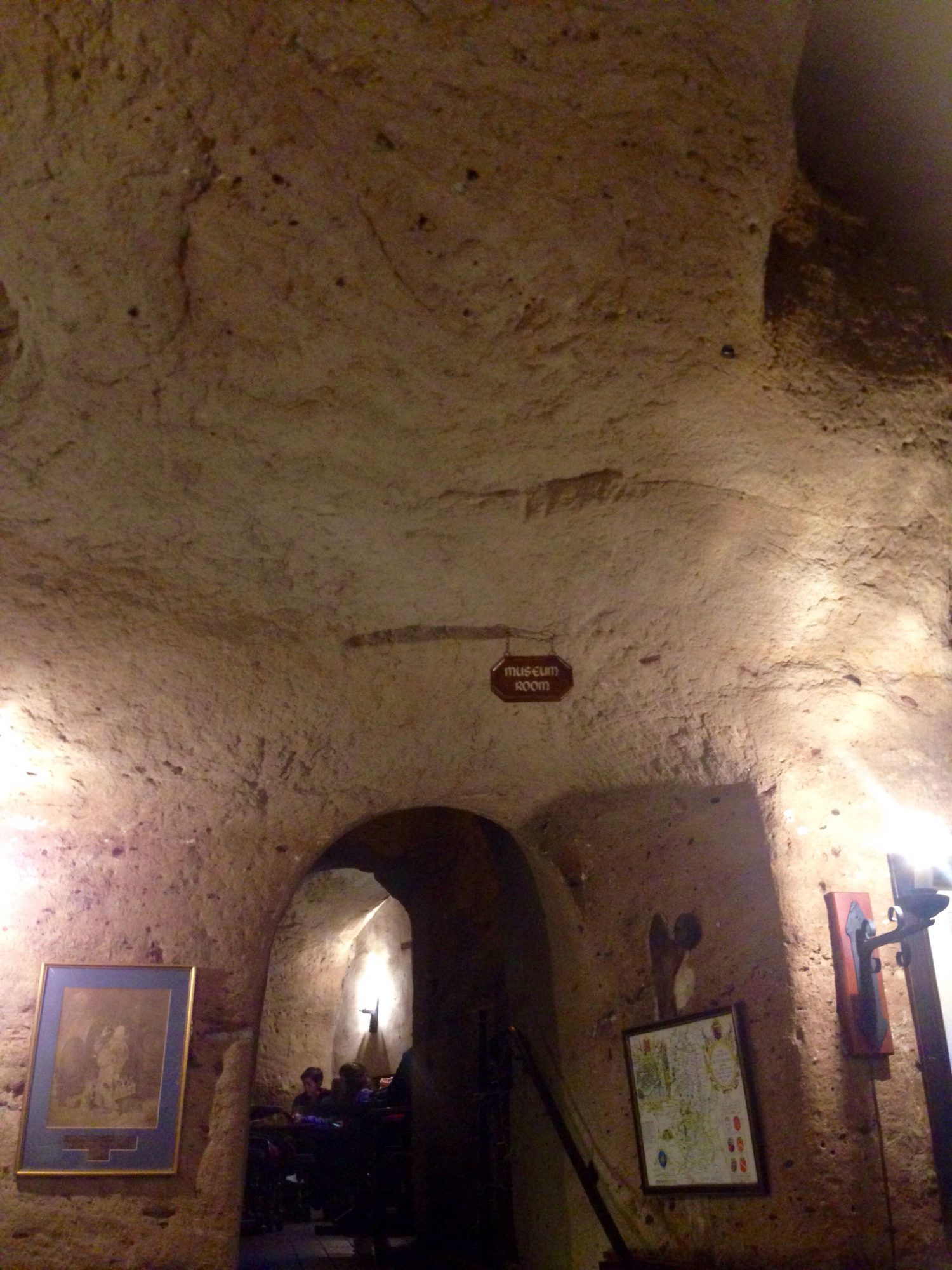 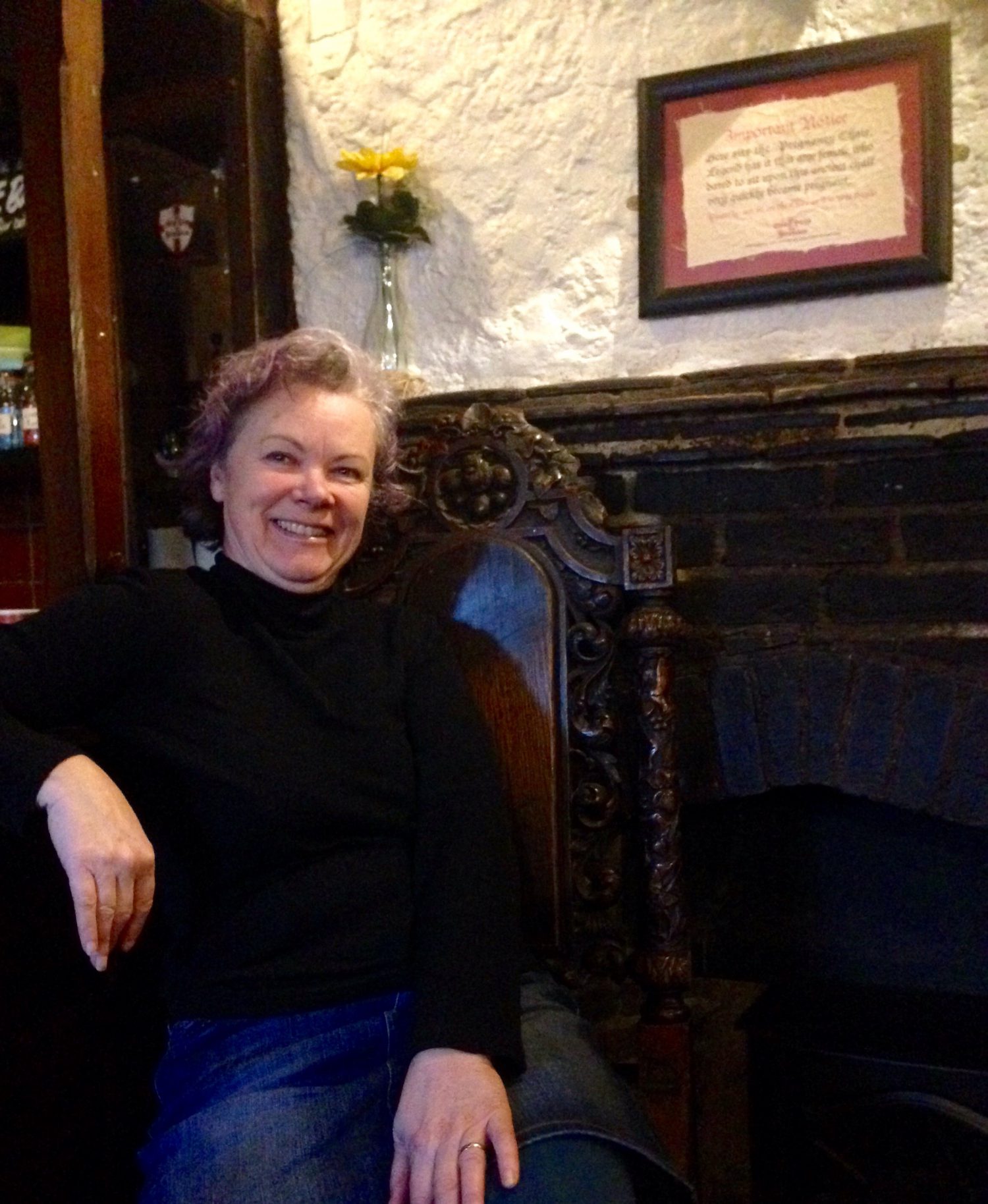 Any female sitting in this chair is likely to become pregnant apparently – that would be a miracle! 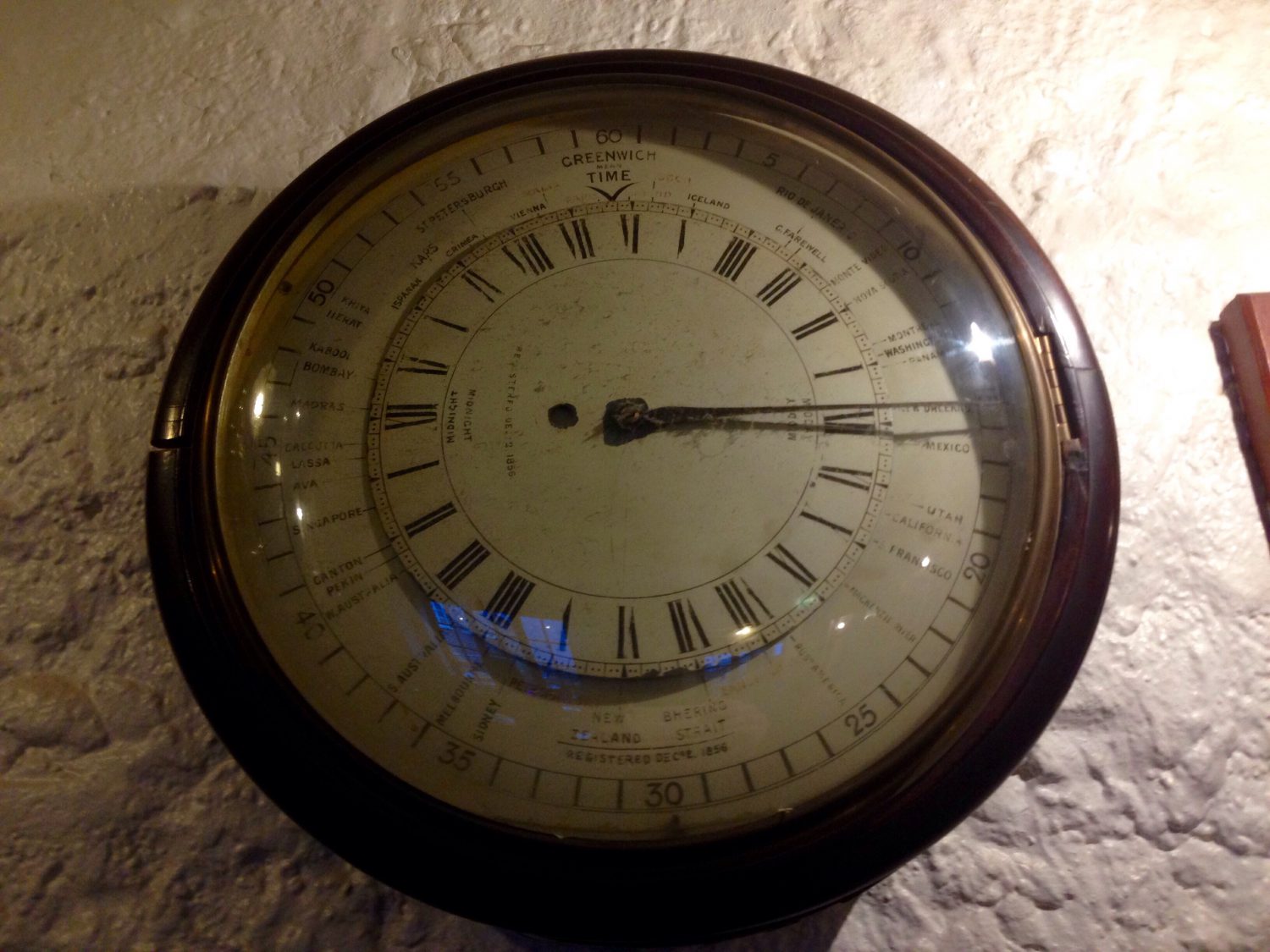 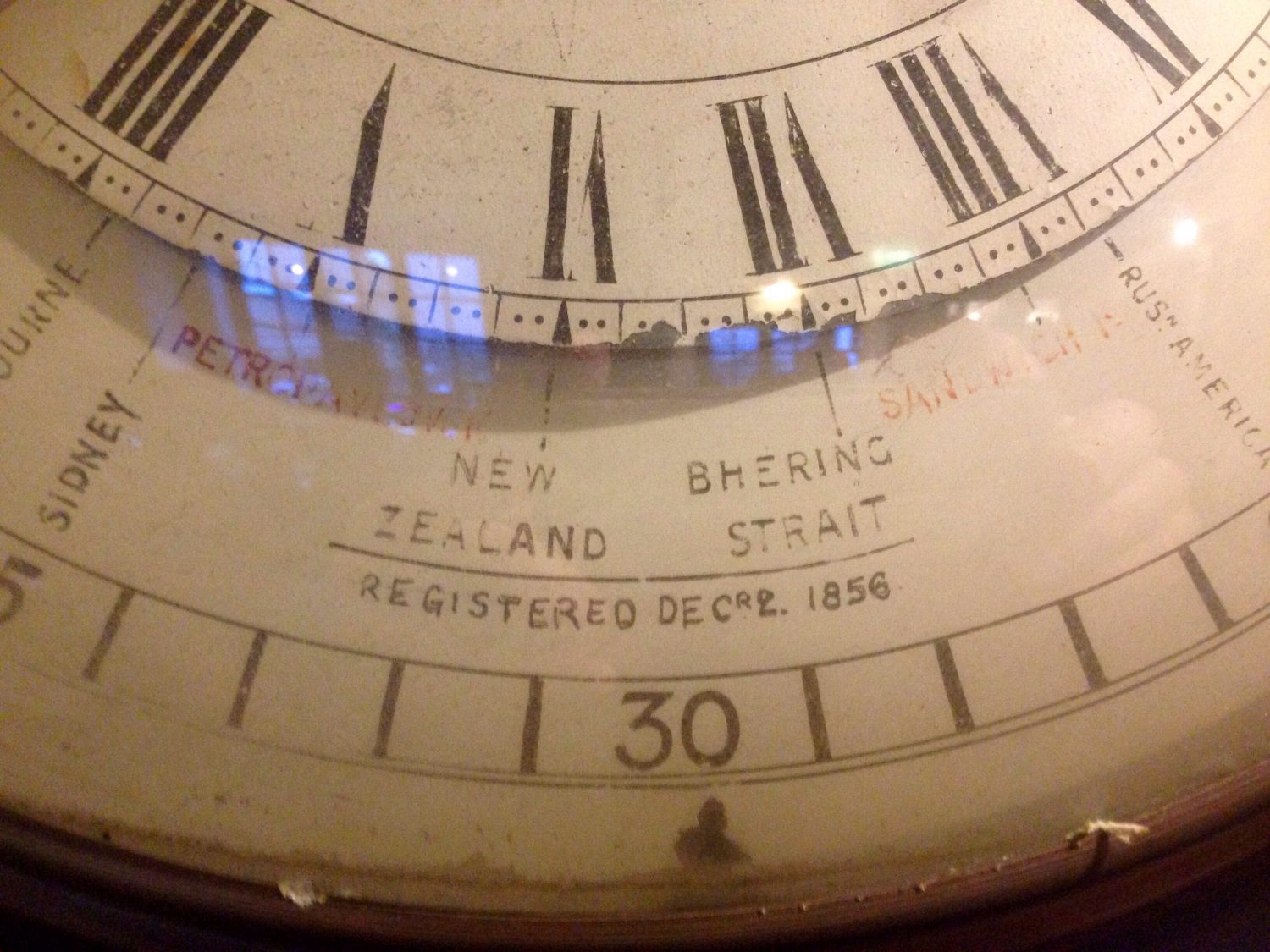 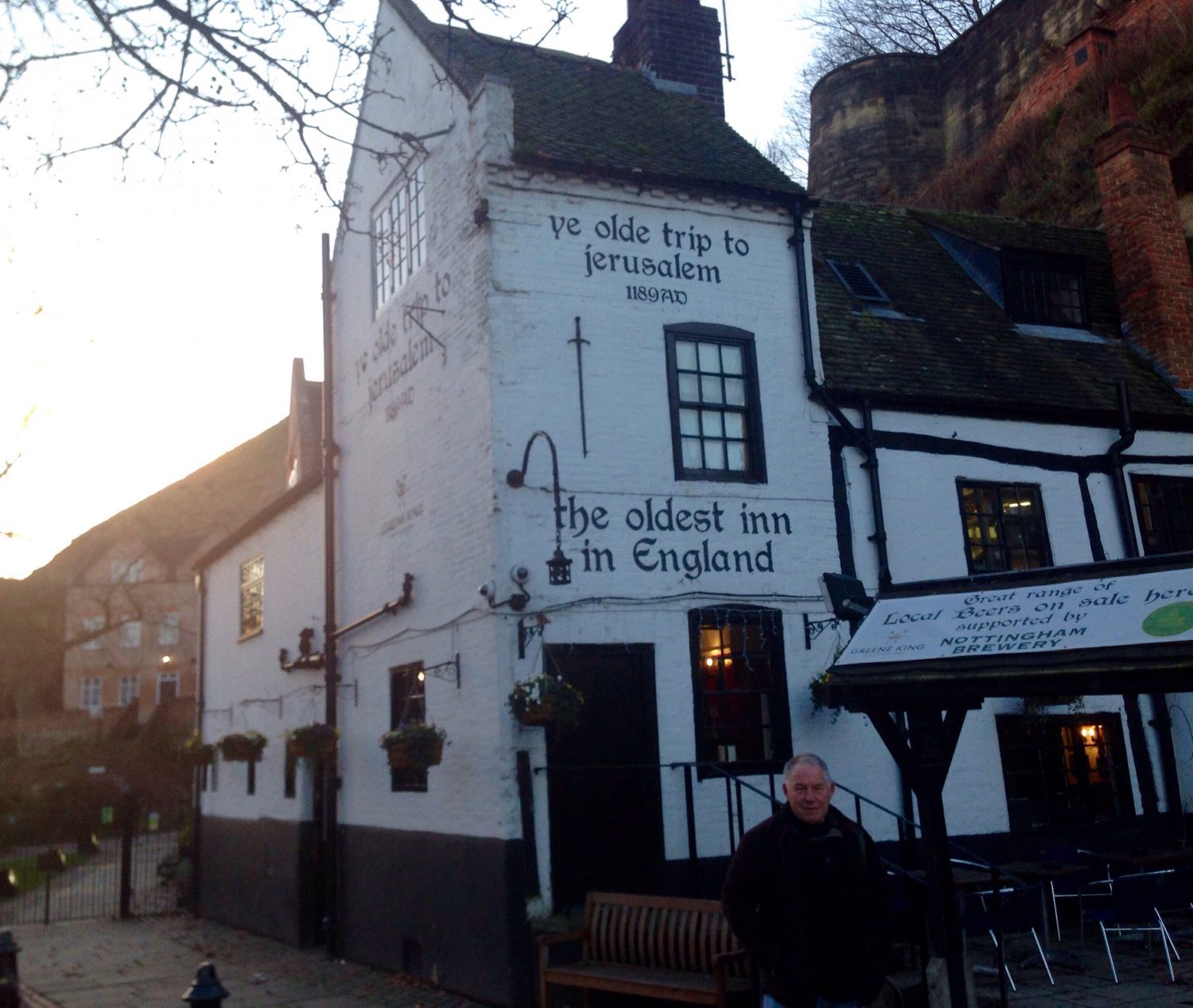 Staying for a few more days …

We’re pottering here until early next week, and planning on returning to ‘The Trip’ this evening by 7pm for the ‘Ghost walk‘. We’ll consider fitting in the National Justice Museum and possibly the Caves, and maybe return to see the Castle (which by the way, is no longer a castle as such!), before moving on – as well as catching up with a couple of friends. However, the cost of entry to these attractions are rather exorbitant to our limited budget so we may discover enough tonight to satisfy our curiosity. We’ll see … 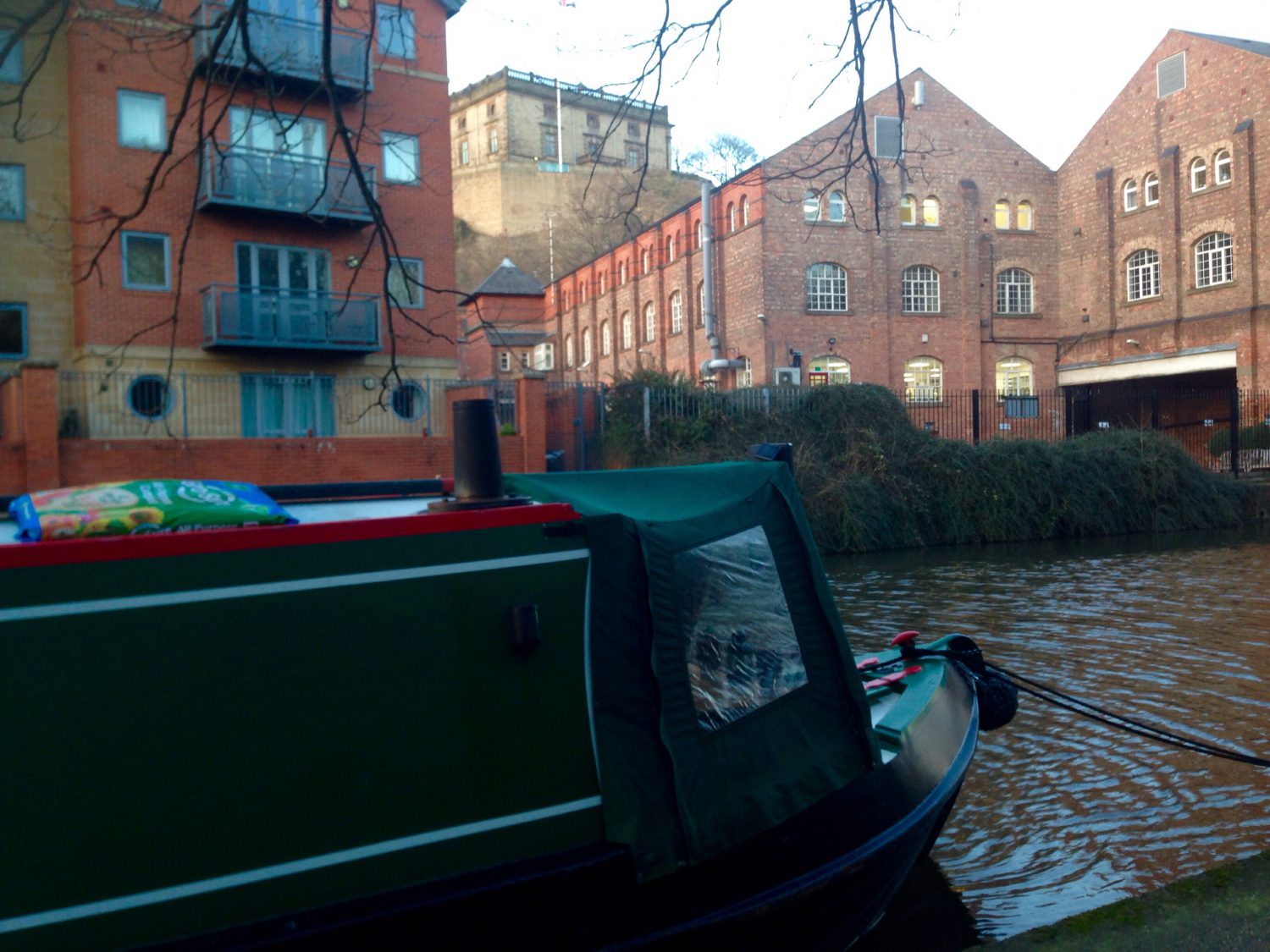 Areandare’s mooring being overlooked by the Castle

Next week we’ll heading onto the River Trent towards to Newark for a couple of days exploration.

In between all this, we’ll continue with the ‘brightening up and decluttering the boat’ endeavours (lots of Kiwi visitors arriving in the summer months so we want it looking lovely for them as well as for ourselves!), and also squeezing in some ‘work’ – not the type most readers are familiar with naturally, as we’ve learnt through trial and error it needs to be location independent to be sustainable. More about how we’re progressing with that in future …

Oh yes! And we’re currently trialling the Valiant Flue Pipe Fan which we’ll write a review of next week.

2 thoughts on “A disappointing not Light Night in Nottingham”