Regular readers, and those who know Barry well, will be familiar with his frustrating footwear predicament. It’s been nigh-on impossible to find shoes or boots, even jandals (flip-flops for the Brits among you!) to fit without squashing his feet. He’d managed to find some Addidas jandals last year, not cheaply, but they sort of fit – when he’d cut around the back and front to stop him tripping over them. Sadly one of these was left at the bottom of the canal in Scotland in July (more on that tale to come). I’m not sure he’s ever been able to find a pair that really fit him comfortably. He used to joke he could’ve been cast as a Hobbit without modification.

In 2013, our first year here, I vividly recall traipsing our fabulous friend Fred around Sheffield in the vain hope we’d get a pair of boots. Eventually we did find some that were ‘good enough’ and Barry wore them until they were split in the sides, then last September we were ecstatic to find a shop with shoes that almost fit. Sadly the sales assistant insisted that Barry have a size smaller than he felt he needed, saying they would definitely be fine, and he’s regretted it ever since (only £150 a pair!). People just have no idea how unique they are.

He regales the tale of how he once had his feet measured, and informed he had a size eight in length and twelve in width! Asking shoe retailers about ‘wide’ feet, they mostly refer us to Clarke’s – where they do amazingly wide (NOT!) footwear up to ‘H’.

I’ve often wished I could discover a way to have them measured more comprehensively and get a pair made to measure.

Last week we did just that! At last!

My sister Viv had informed us of a fabulous shoe shop – cobblers actually – in Exeter. The shoes are hand made to measure. Not the world’s most fashionable styles. That’s not a problem. You can keep fashion thank you; comfort is far more crucial.

We returned to Exeter from Cornwall earlier than expected on Tuesday, as the weather wasn’t up to much. Which was brilliant as it meant we had time to walk to ‘Chuckle Shoes‘, and the lovely Barrie took time out from his frantic work schedule (he informed us he’s got orders to fulfil until early March) to personally check out Barry’s feet. 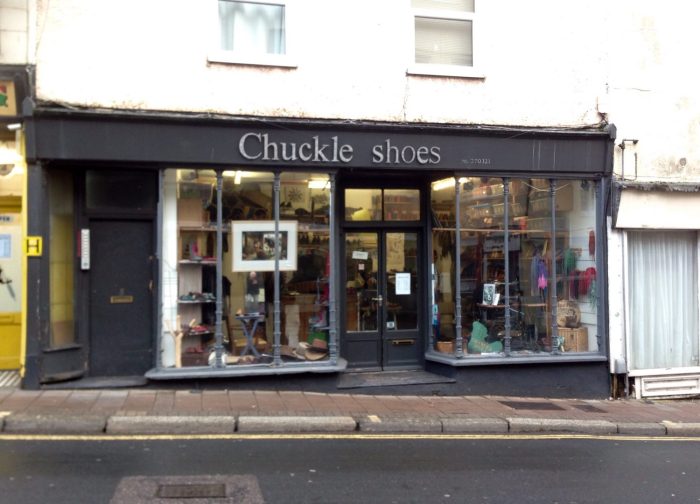 The answer to our quest 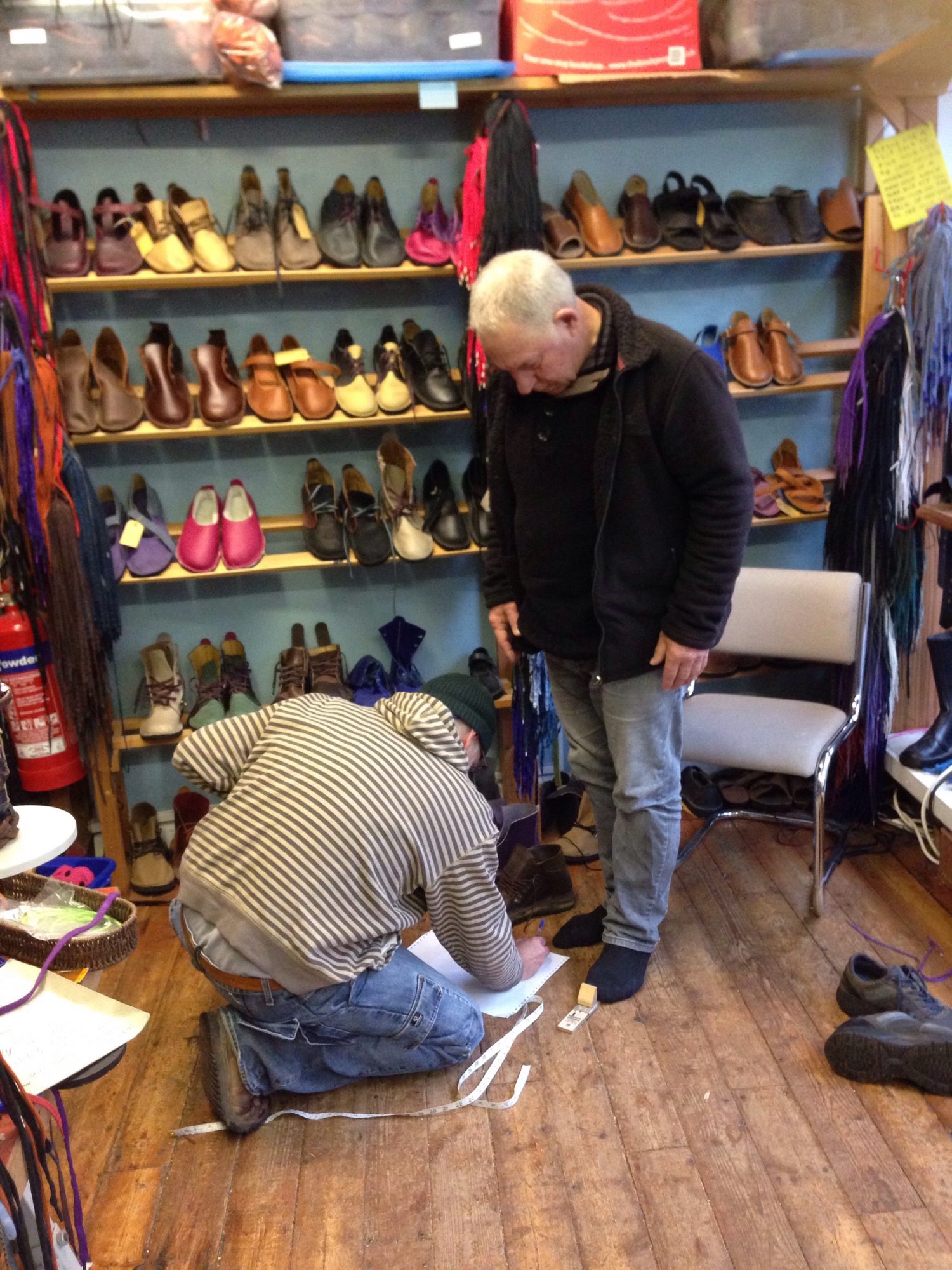 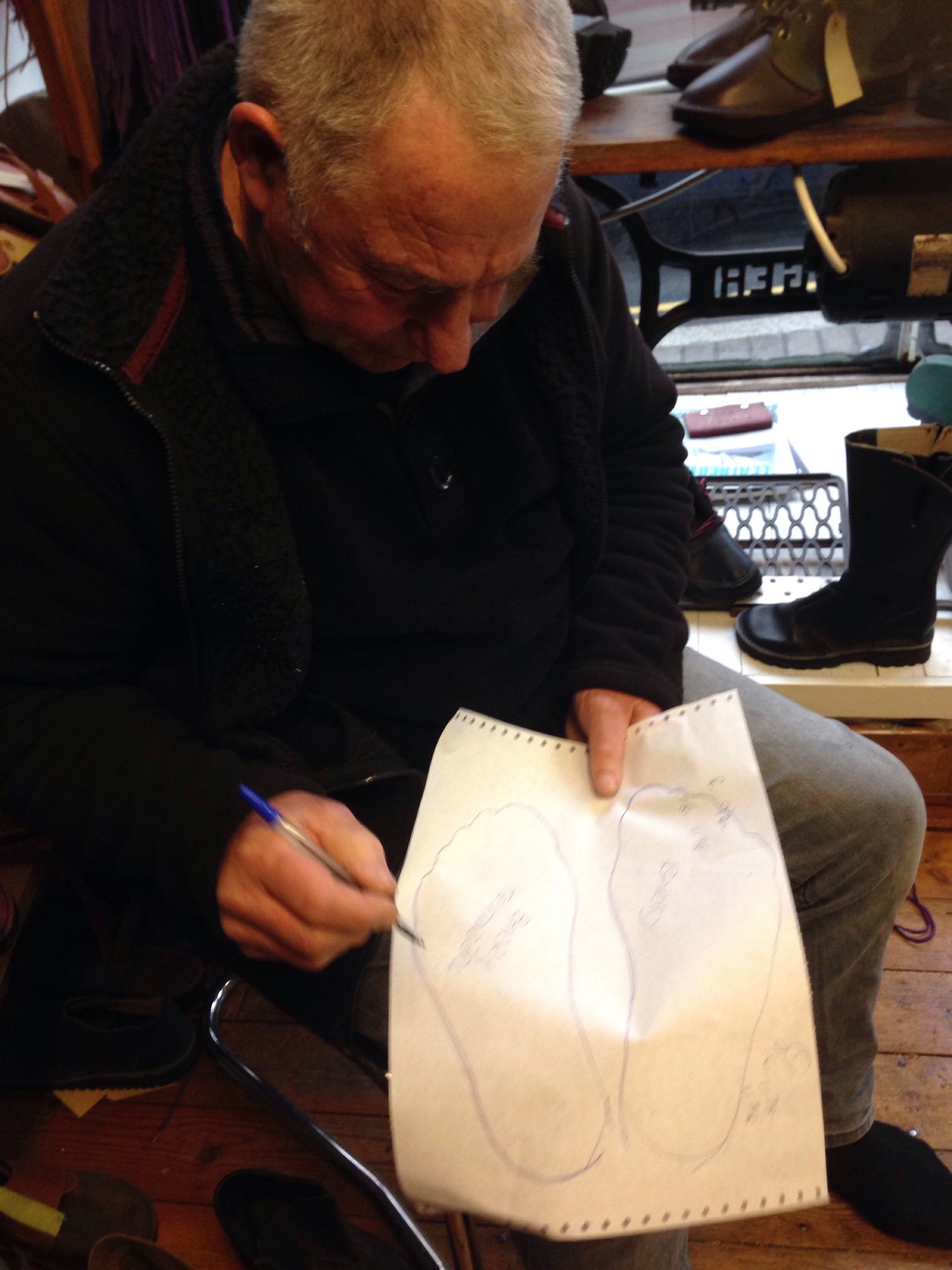 It turns out his feet are as wide as they’re long – which makes them ‘true orthopaedic feet’ – at least I think that’s what he said. One’s also slightly wider than the other. Examining them a little further he assumed they’d been injured at some stage – but no, they’re just Barry’s feet. The width were off his scale – he calculated it would be a ‘W’ – just a smidgen wider than a ‘H’ from Clarke’s 🙂

We’re not actually getting any made yet, having spent £300 on two pairs not so long ago it’s difficult to justify. Though we most definitely WILL be getting some made in the not too distant future – and I suspect won’t be giving our hard earned cash to anyone else but Barrie for the rest of Barry’s days!

4 thoughts on “Cobblers at last!”