Years ago, when I initially ventured to New Zealand in the British autumn of 2001, I treasured the gift of time to read a number of inspirational books. One of these was ‘The Celestine Prophesy‘. I recall it talked about how people come into your life for a reason, and each one, if you’re open and watching, has some form of lesson for you. Mostly people in the busy-ness of 21st century life are moving too frantically to digest the awareness of their particular teachers’ words of wisdom.

The book also touched upon synchronistic happenings. As if Universal energy emits signals into the ether around subjects you think or mention. The words contained my ‘Spiritual Awakening’ I guess.

A few strange events appear to be leading me towards reading this book again – or at the very least whispering to me to make more space to notice people and events around us.

Emerging from our intense 14 week Calendar Club stint on 9th January, I revealed to Barry I felt like Persephone coming to the earth’s surface after her long, hard winter under ground with her husband Hades. Two days later we had the pleasure of catching up with two of our closest friends here in UK, Helen and Andy Tidy from Wild Side Jams and Preserves. Half-way through lunch (I can’t even recall what the topic of conversation had been), Helen started to tell the story of Persephone! I was incredulous. Actually she was talking of Per-seph-anee, where I’d always pronounced it Per-se-phone! I stood corrected. Helen is an amazingly intelligent and wise woman – she would definitely know the correct pronunciation.

That wasn’t the only coincidence on the subject however.

At my recent weekend retreat with The Body Creative, on the evening of 12th January, the first story told was that of – you guessed it! Persephone! How she was taken below ground to be Hades’ wife, and how her mother, Demeter, was so heartbroken a deal was struck to enable her to rise in the spring for nine months each year.

I was a little spooked. Mostly I felt incredulous at such amazing energy surrounding me. 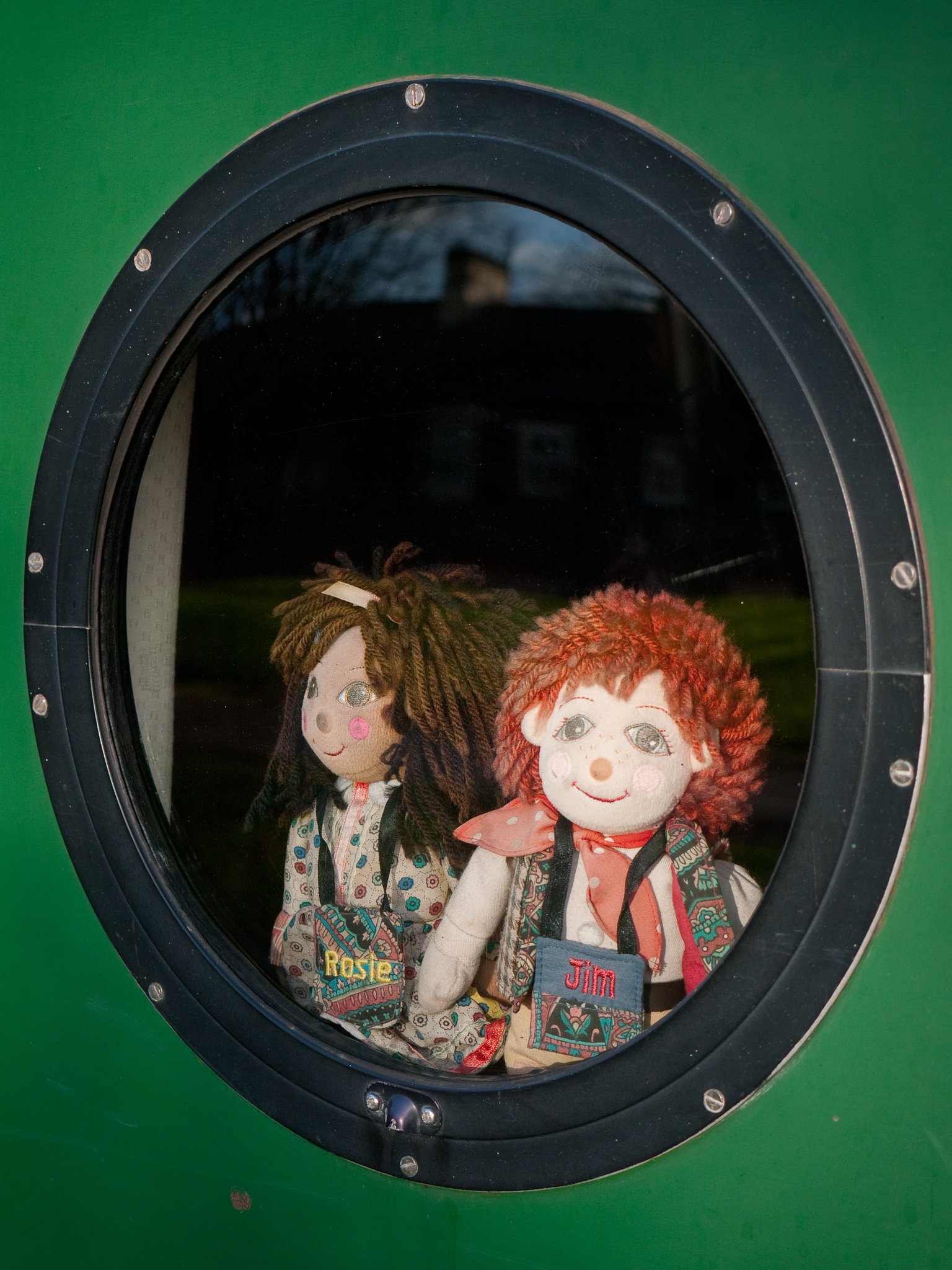 Whilst moored in Willington last week, we contacted our dear friend Andrew Denney, aka Granny Buttons, aka Waterways World Deputy Editor, to see if he was free for a catch up. He had deadlines to meet on the latest edition so didn’t have much time available. However, he asked if Barry could take a photo or two of ‘Rosie and Jim’ for an article he was writing. Most people reading this will be familiar with this children’s programme based on the canal – Barry knows of it from being here but we don’t think it ever made its way to the Southern Hemisphere. He said he could drop said dolls off around 0745hrs the following day. I laughed in my response text! He left them sitting snuggly in the cratch as we slept …

That morning I turned my phone on  and notification popped up from a Facebook message from another friend in New Zealand. Guess what the subject was? Indeed! Rosie and Jim! Completely bizarre. I was rather freaked to say the least. Here’s the video link (if it works – you have to be on Facebook).

Barry recalled he’d seen a narrowboat on the system called ‘Rosé and Gin’ shortly after we arrived and chuckled. What an ideal name that would’ve been for The Home Brew Boat …

Making more of the blog

It’ll be nine years in April since we began blogging about our adventures on the Inland Waterways. Initially at www.nbnorthernpride.blogspot.co.uk, and since April 2014 here on WordPress. In our first two six-month trips from New Zealand we blogged almost every day. Barry spent hours taking and editing stunning shots to showcase his wonderment of the history and beauty of canal life.

It’s now become a way of life for me to write here. Occasionally Barry dips in too (I’m planning to get more of his photography included this year). And we frequently meet people from all over the world who read the blog and stop by to say ‘hi’.

My intention this year is to focus more on writing and expanding what we do with the blog, and that’s what I’ve been ‘putting out there’ as you say – to the Universe.

On Wednesday I returned from a 24-hour visit to mum to organise a number of things for her, one of which was her dreaded annual dental check-up. At almost 85 years old she still has all her own teeth and they were fine. Hurrah!

I arrived back on board around 7pm, cooked tea, then checked my Hotmail. There was an email from a company saying how much they liked our blog, and would we be interested in testing a brand new product for them, something not yet on the market, and writing a review? A magnetic flue pipe fan. I discussed the prospect with Barry who looked aghast. “Just this morning,” he said, “I was looking at the stove and thinking it would be really useful to have a fan that could be attached TO the flue, rather than sitting precariously on the top of the stove where we’ll knock it off!!!”

So yes, we shall be testing the flue fan and writing about our experience with it in future. We did have a fan on the stove, some time ago, but it fell off once too often and the sensitive mechanism wasn’t robust enough to survive. This sounds like a brilliant answer to ours, and many boaters needs.

What shall we put out there next I wonder?

3 thoughts on “Some strange synchronistic happenings”