It’s been a while since we’ve welcomed friends on board for an overnight stay – AND cruised the cut with them.

Tim’s no stranger to our boating adventures, having kept Barry company a few weeks ago from Alrewas to Whittington. He also accompanied him in 2009 when I was off galavanting to Barcelona for a hot and fun-filled Hen Weekend. On that occasion we were on the Llangollen Canal in our previous boat Northern Pride, and Tim even featured in a large photo in our five page Canal Boat article (which he’d not known about until last night! Shocking of us to have omitted to tell him till now!).

Tracey hadn’t been on board before. I think she loved it! We just hadn’t been expecting to be ice-breaking and cruising in the driving snow today; Tracey even took a turn at steering. Unfortunately (!) there was only room for three adults at the helm so I had to stay inside by the fire, apart from assisting with the locks … 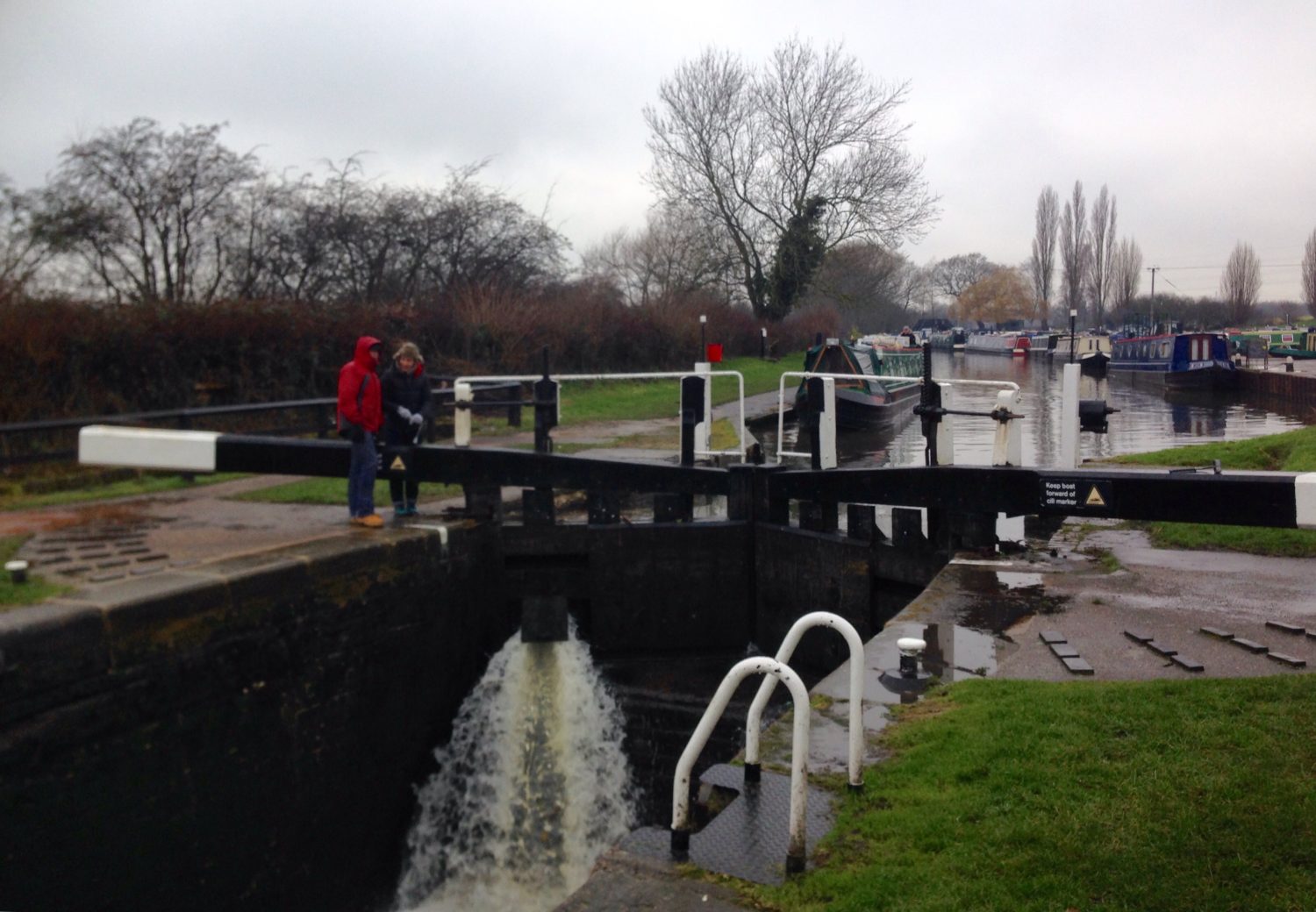 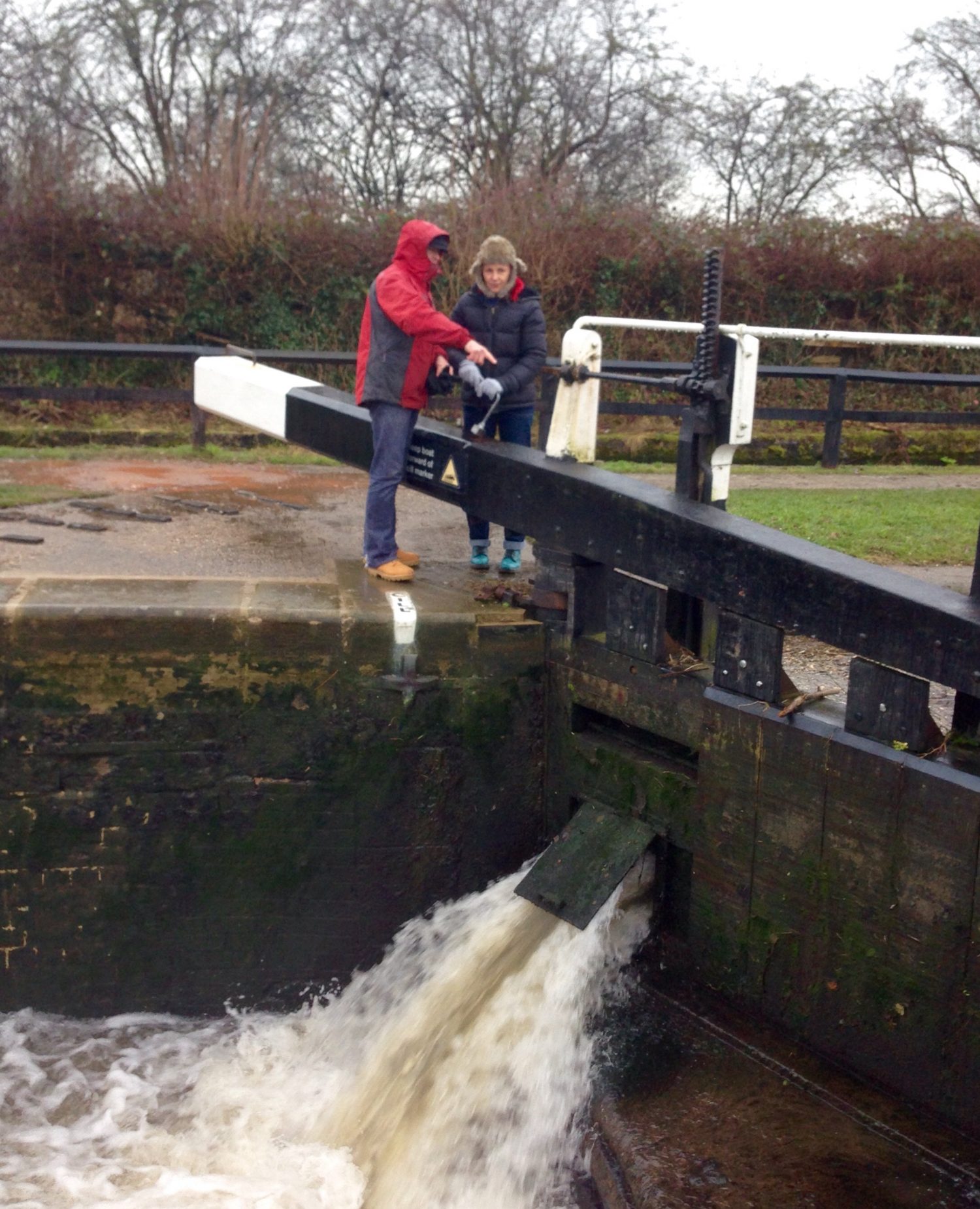 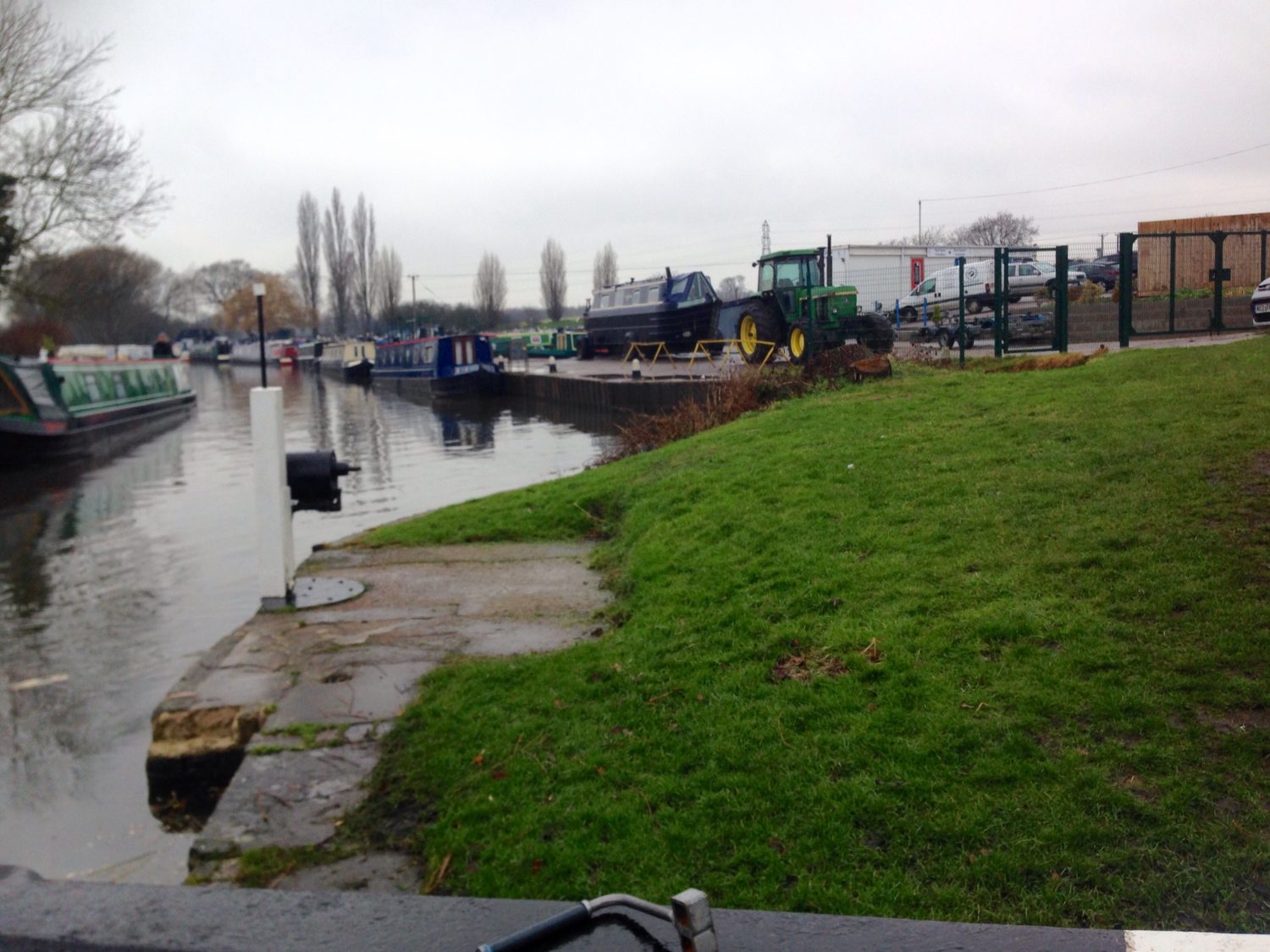 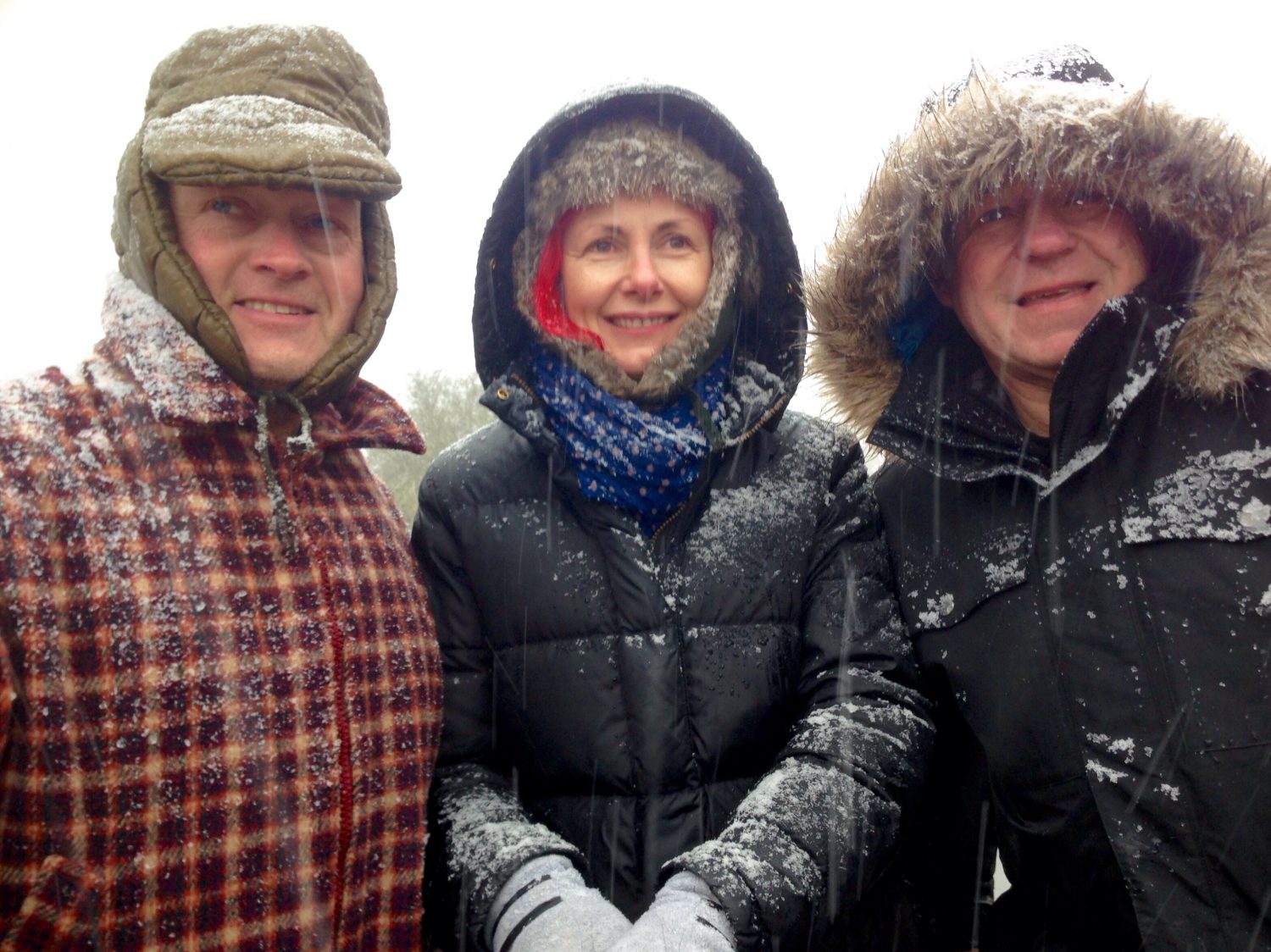 We weren’t expecting an Arctic Blizzard! 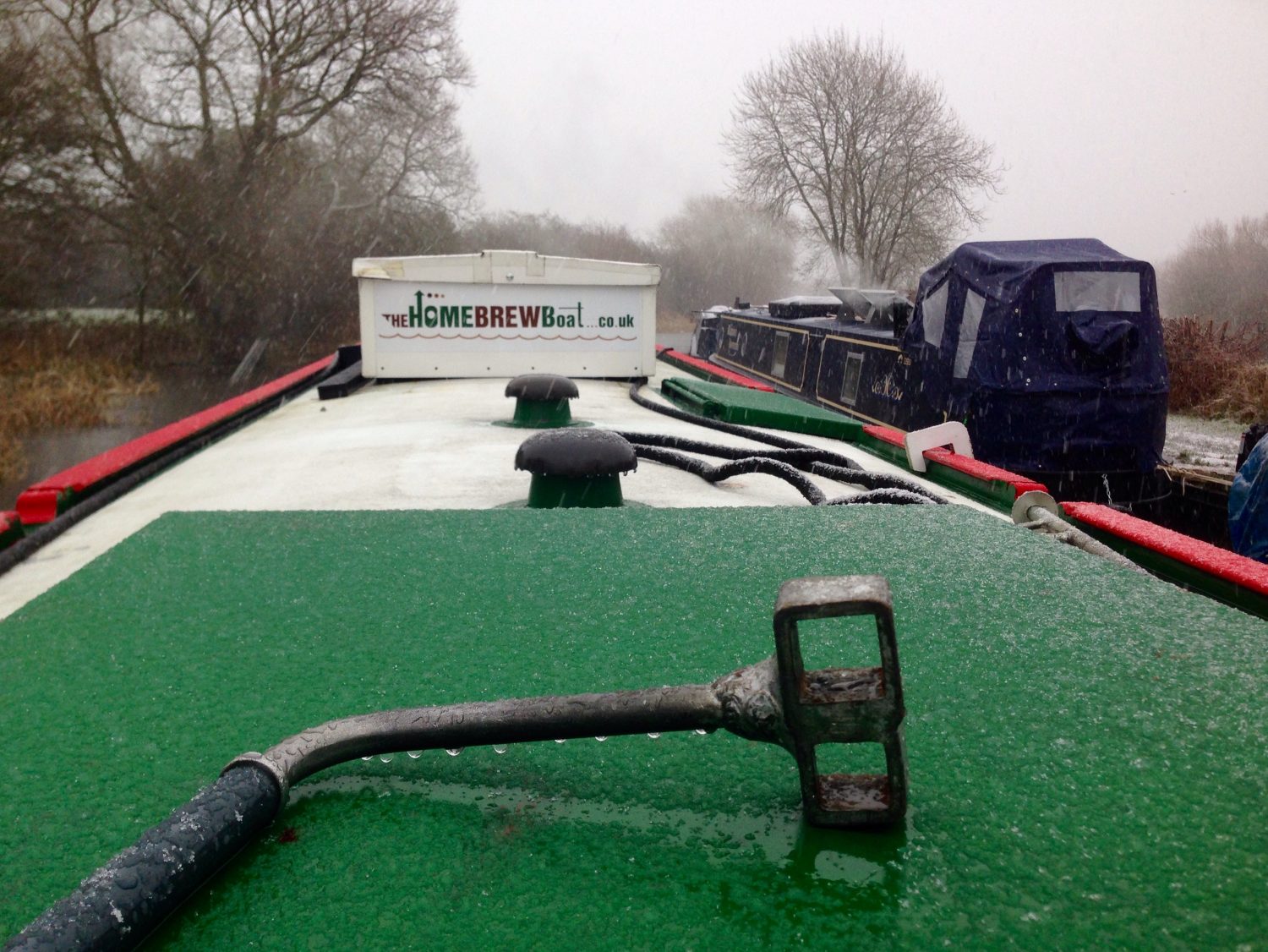 Ice-breaking along the cut 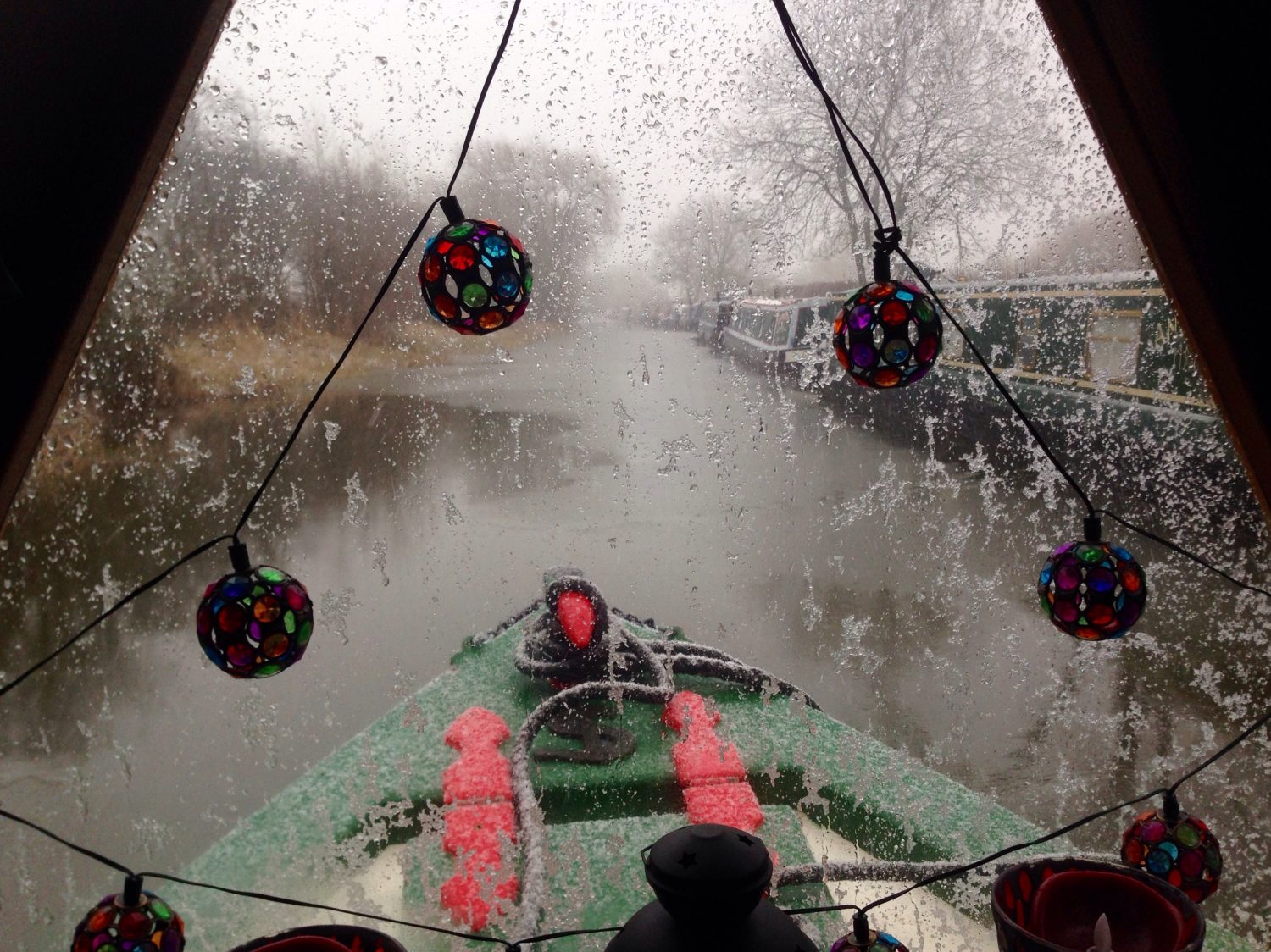 View from the front 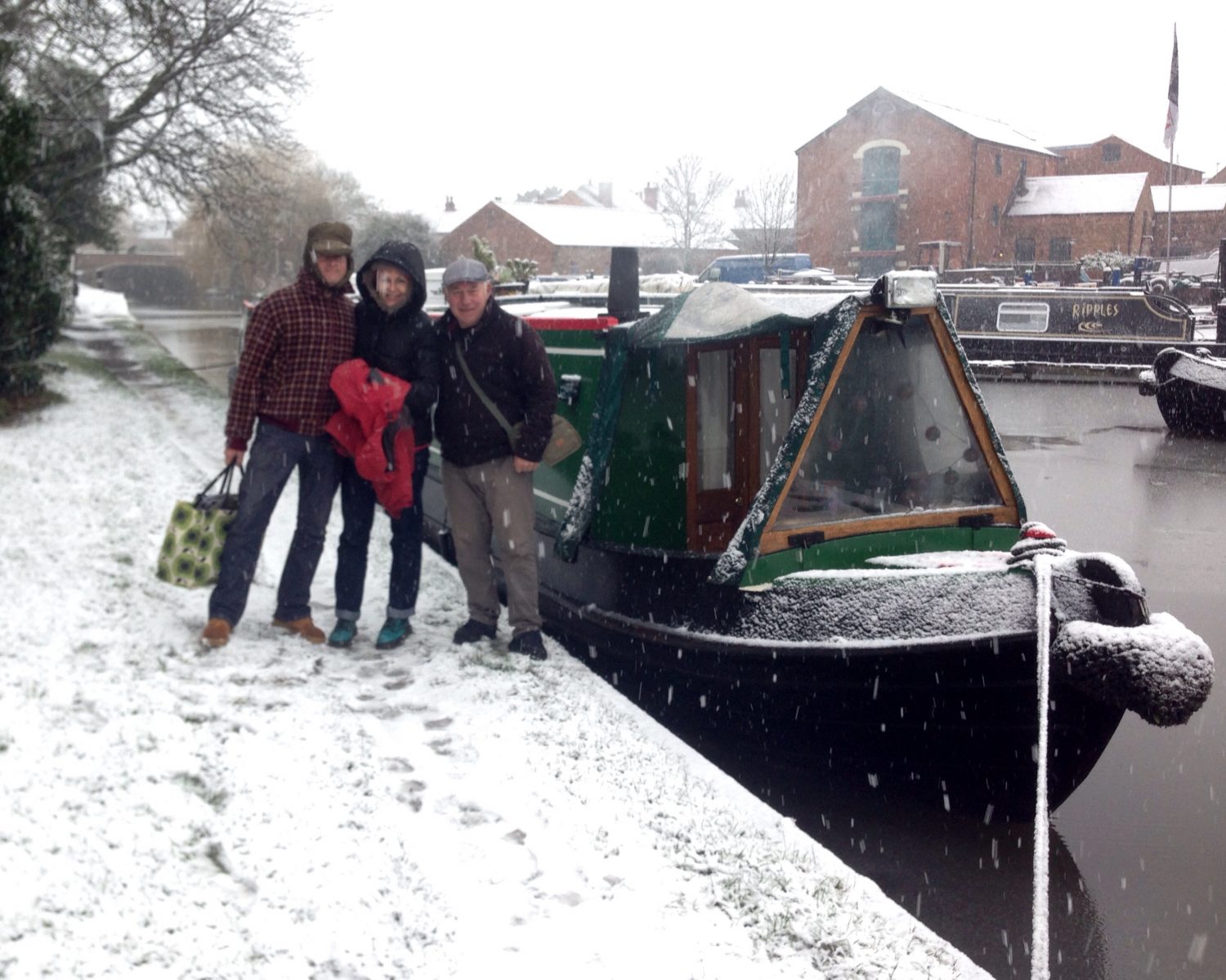 Pretty as a picture Tim, Tracey and Barry 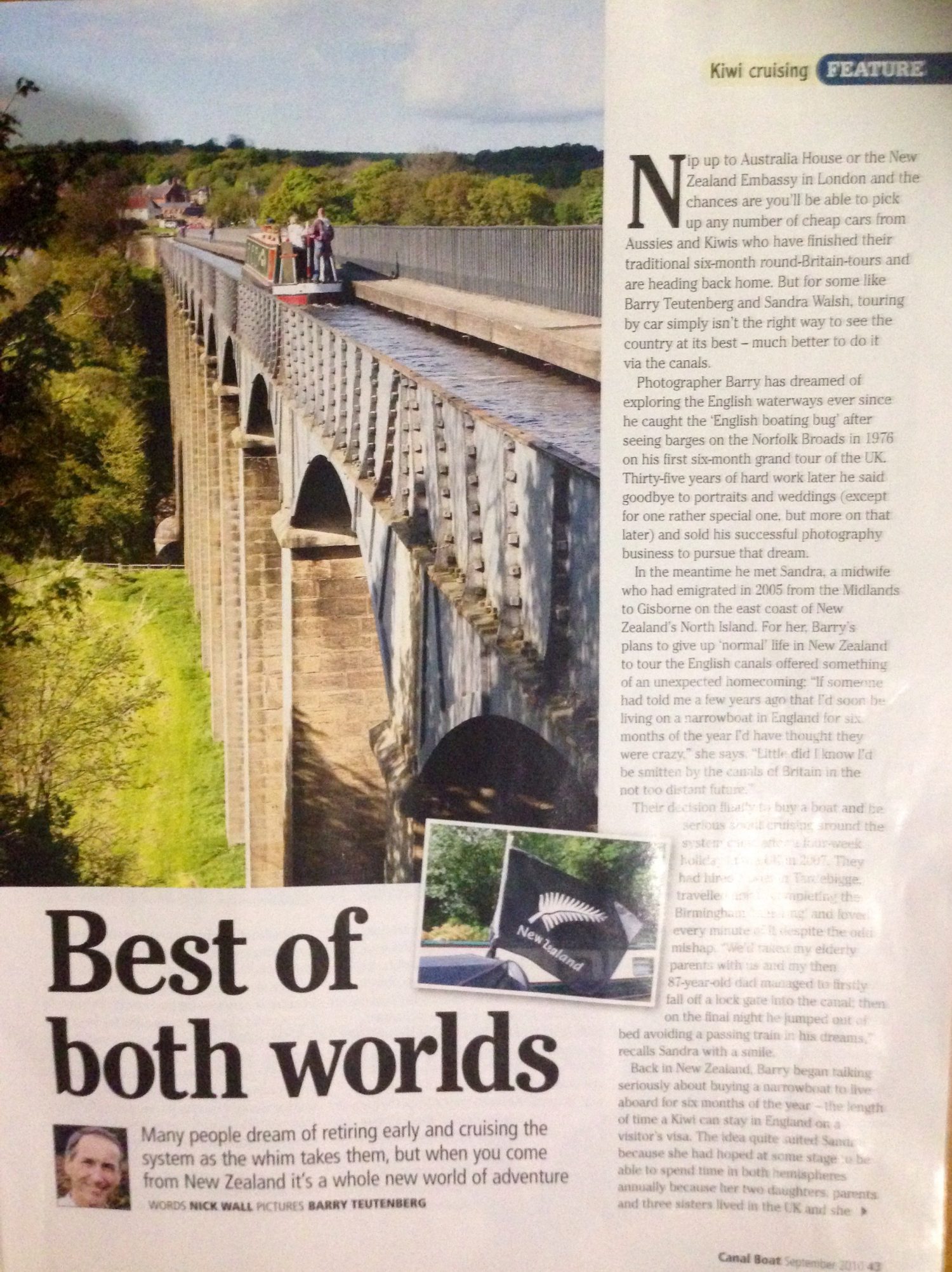 Our five-page September 2010 Canal Boat article – Tim can be seen steering NB Northern Pride over the Pontcysllte Aqueduct, with my older sister safely tucked inside the rear door, while Barry skips around shooting excitedly

A most enjoyable 24 hours. I’m sure we’ll be repeating it sometime this year – when we can see if Tim remembers anything about the rules and rigours of ‘Six-Handed-Rummy‘. We cajoled them into a round last night, but only after a few glasses of home brewed red wine which didn’t help Tim’s grasp of the rules one iota.

Fun times. And so many more promised in the near and far future …

No festivals for us until June – what on earth are we doing?

This year, as I’ve previously mentioned, we’ve long-planned to do things differently. For three years we’ve followed almost the same route and festivals.

Time for a change.

It’s quite a risk, as we’ll be experimenting with more ‘Towpath Trading’ opportunities, but as Mark Twain apparently stated wisely eons ago but is extremely pertinent in this 21st century of fear and rushing:

“Twenty years from now you will be more disappointed by the things that you didn’t do than by the ones you did do. So throw off the bowlines. Sail away from the safe harbor. Catch the trade winds in your sails. Explore. Dream. Discover.”

Our first festival’s likely to be (as long as we’ve got a spot available, not yet confirmed!) FAB Middlewich, 15th to 17th June. Sadly we’ll be missing St Richard’s in Droitwich, which we love, but it’s just not possible with the places we want to re-visit and see for the first time.

It’s not the easiest to see, but below is our itinerary from now until early June. We’ll be visiting friends in Lincoln, as we ‘do the Trent’ once again. My memories of the raging river from 2009 aren’t the most positive, but I’m confident Barry has learned from ‘The Keadby Crash’ (as it has since been known and told to many), and will not be repeating it! We were such novices back then it horrifies me, with little clue of the dangers surrounding us. Good job really on reflection or I’m not sure I’d have been so keen on that part of our early travels! Fortunately this time we won’t be even attempting Keadby Lock.

We may even have a very special visitor on board for some of the Trent – depending on how it pans out. I’ll say no more for now …

We’re hoping to go to Goole, then to the end of the Sheffield and South Yorkshire Navigation as far as Sheffield to see friends (and back up). Following that we’ll make a tiny de-tour for part of the Calder and Hebble we haven’t previously experienced, as far as Wakefield which promises a veritable array of delicacies. It’ll then be a re-trace of our steps and up to Leeds to see a few more buddies. Then, oh my goodness! A spectacularly fascinating canal we rushed through almost nine years ago, The Leeds Liverpool. We’ll be moving far more slowly this time if all goes to plan, and relishing the surroundings. Hopefully we’ll then arrange to meet up with friends in Blackburn who we’ve not seen since they visited us in Gisborne some years ago. 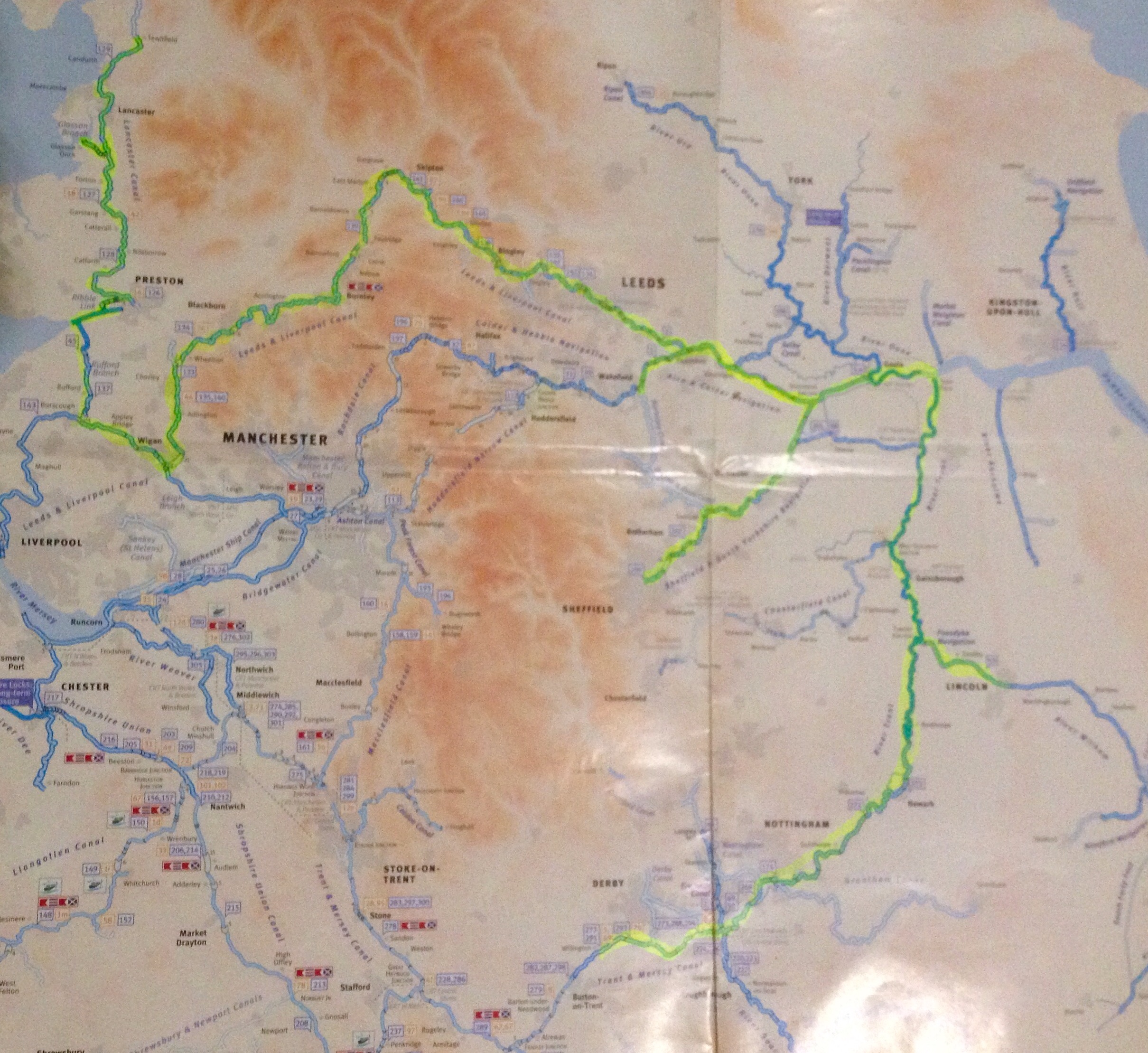 The culmination of our path is the Lancaster Canal, via The Ribble Link (read more by clicking the link, it’ll be a once-in-a-lifetime experience), which only opened in 2002.Part of this route almost hugs the sea at Morecombe Bay, where we’ll catch up with other friends! Maybe we’ll also have another passenger or two on board for some of this route.

As we travel we’ll find trading opportunities – we hope! Barry will continue with The Home Brew Boat, and I’ll be getting lots of lovely Canal Art ready to sell with or without me on board. Facepainting will be kept until Middlewich, unless anyone contacts me for a party nearby wherever we are, which is always a possibility.

That’s more than enough information for now on where we’ve been, where we are, and where we’re going – so long as life lets us and doesn’t have alternative plans.

What are you up to this year? Anything exciting? Will you sail from your ‘safe harbour’ at all?

If you’re near anywhere on the map above, please get in touch and let’s  see if we can arrange a meet-up.