We’ve spent time with friends, and more money than we care to mention has been spent too, but boy you only live once and celebrating the anniversary of our narrowboat wedding and my birth day are priceless.

On our drive down to Hove, we slipped off the M40 to have lunch with dear friends Jenny and John on wedding anniversary. I was obviously so very ‘present’ there, I forgot to take ANY photos! It’s always great to enjoy the experience, and we most certainly did, but I do love to have tangible memories of special times too.

We’ve spent three gorgeous days and nights at my daughter Kim’s flat in Hove. It’s cosy, and  oh so spacious compared to our 60 foot long and six foot ten inches wide narrowboat. Sublime. Such a special treat to be away for a while, just the two of us.On Wednesday morning we walked into Brighton along seafront. Stopping off at an amazing bakery to pick up a Flat White and Portuguese custard tart for me, and a sausage roll for Barry. We relished sitting on the shingle beach, right outside Dave Gilmore’s seafront apartment. 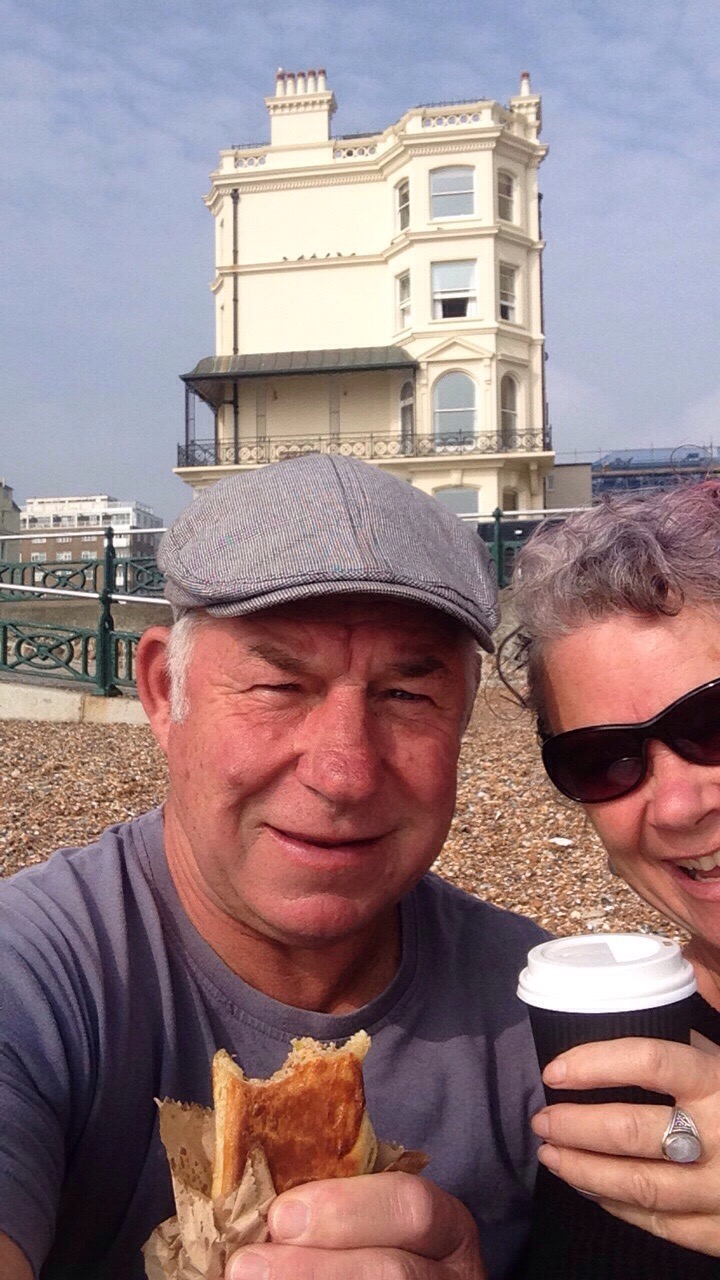 Walking further along, we stopped for a picnic lunch, listened to some live music, watched some comings and goings on the final day of the Labour Party Conference, and scooped up a pot of prawns and crabs. My favourite seafood treat from here.

I suggested, while we’re in a big city, that we could look for some shoes for Barry. This may seem an innocuous ‘task’ to most, but to Barry it brings up many traumas. His feet, you see, are unusual. Very wide at the front. Apparently as six eight length, but an 11 width. You’ll see from one of the images below. So finding shoes to fit is a rarity. We found some. Miracle of miracles! In ‘Shuropedy’. His foot slipped in like Cinderella’s slipper did. So we bought two pairs. Because it’s important he has comfortable footwear for our 14 week Calendar Club job. And the only footwear he had was over four years old and worn out – a large hole in one side … The cost was extortionate, so they’ll have to last a decade! He also bought a new flat cap which looks rather dapper – though he did leave it in the theatre that evening …

Where we watched Suzanne Vega, in concert. My birthday treat. I knew of her, but we’d had to listen to some of her music in the car to recognise her folky voice – Tom’s Diner, My Name is Luca, are a couple you’ll most likely know. Following the concert we walked round the corner and listened to some live jazz in a trendy bar full of students! We felt a little old. But it was fun.

On my actual birthday I had a hair appointment with Amanda at The Hair and Lounge. I panicked a little getting there, as we didn’t want to take the car but didn’t quite work out the buses in time and I thought I’d be late. So I jumped in a taxi at the station. I needn’t have worried as Amanda was running a little late anyway. Barry was his usual calm self. I love how he keeps me grounded, even when I’m a ball of stress.

We had chips on the pier, ice creams at ‘Sprinkles‘, went up the British Airways i360 on the sunset ascent at 6.30pm, and dinner at The Giggling Squid in Hove.

All-in-all, it was one of my best birthdays ever. I had a miserable birthday many years ago and swore I’d always make sure future ones were a cause for celebration and I’d do special things and treat myself like a queen.

Shortly we’re driving to see my sister Linda in Southampton overnight, then to mum’s tomorrow overnight, then back to Areandare Sunday morning. We’ll be visiting our shop on Sunday, ready to get set up very early Monday morning and opening Tuesday.

7 thoughts on “A Brilliant Birthday Break in Balmy Brighton”