Last weekend was our second time trading at the Huddlesford Heritage Gathering as it’s a bi-annual event. I’ve even got a photo published on their 2017 write-up – a terrific tiger! It was a fortuitous final festival of 2017 for us, as it’s nearby geographically to where we’ll be spending the next 15 or so weeks on board Areandare.

My Funtastic Facepainting pitch was just over the footbridge to the Lichfield Cruising Club, which thankfully our mooring was very close to. Initially we’d been a fair distance away, but we’d each emailed our protestations to the organisers having specifically requested a mooring as close to the festival field as possible. It’s hard work for me to carry all my kit there and back from boat to land-based pitch, two days in a row. Even better was I discovered it was possible to leave most of it in-situ overnight on Saturday which was amazing.

Unusually this year, the weather was on our side, despite the dull appearance on the images below – we were extremely grateful that during the trading times it actually DIDN’T RAIN which is something to celebrate this year after many dismal and wet weekends.

Trading wise, we both did marginally better this year than in 2015, which is always encouraging.

On Saturday evening we’d paid our £15 each and booked tickets for the Hog Roast supper and entertainment. We chose to miss out on the latter, as we wanted to chat with fellow traders so stayed outside to eat and drink rather than sitting in rows within the compact music marquee.

On Sunday morning I messaged the other traders we knew to suggest a gathering in celebration of the final festival of 2017 for most, if not all of us. Someone suggested going to the local pub, The Plough. However it’s hard to hear conversations in such venues, or get enough space for us all. Plus, and most importantly, we’d rather not deposit our hard earned cash behind a bar when possible!

The Sunday evening it was forecast to rain. Luckily The Hippie Boat was moored snugly under the railway bridge, so we all brought our chairs and beverages there! It was actually a great venue for an impromptu party. 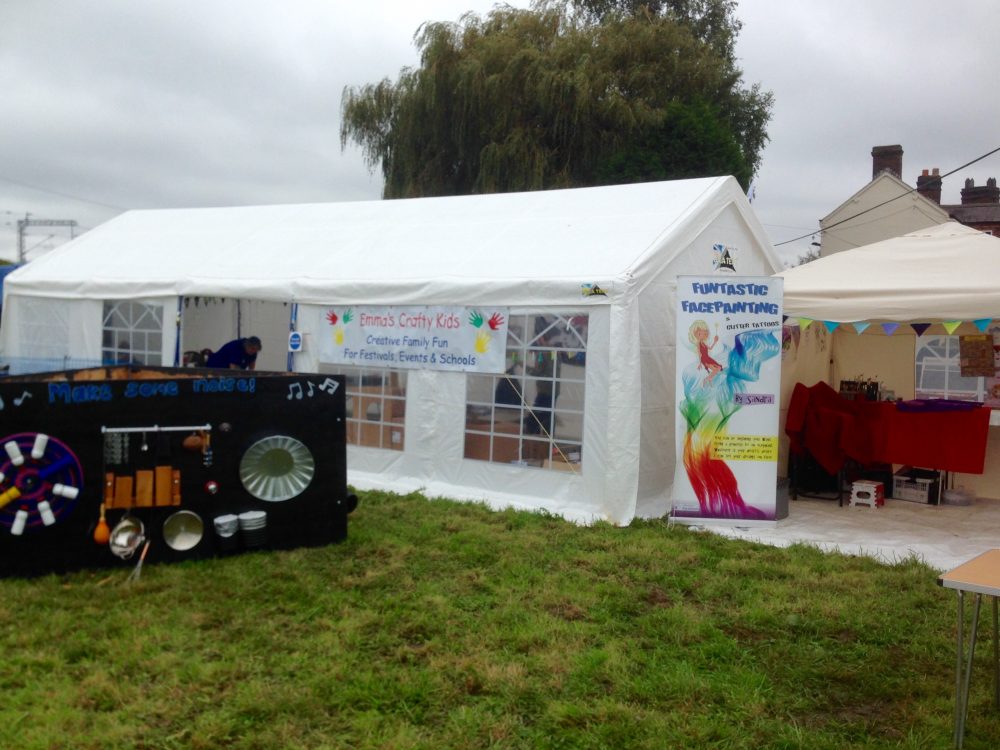 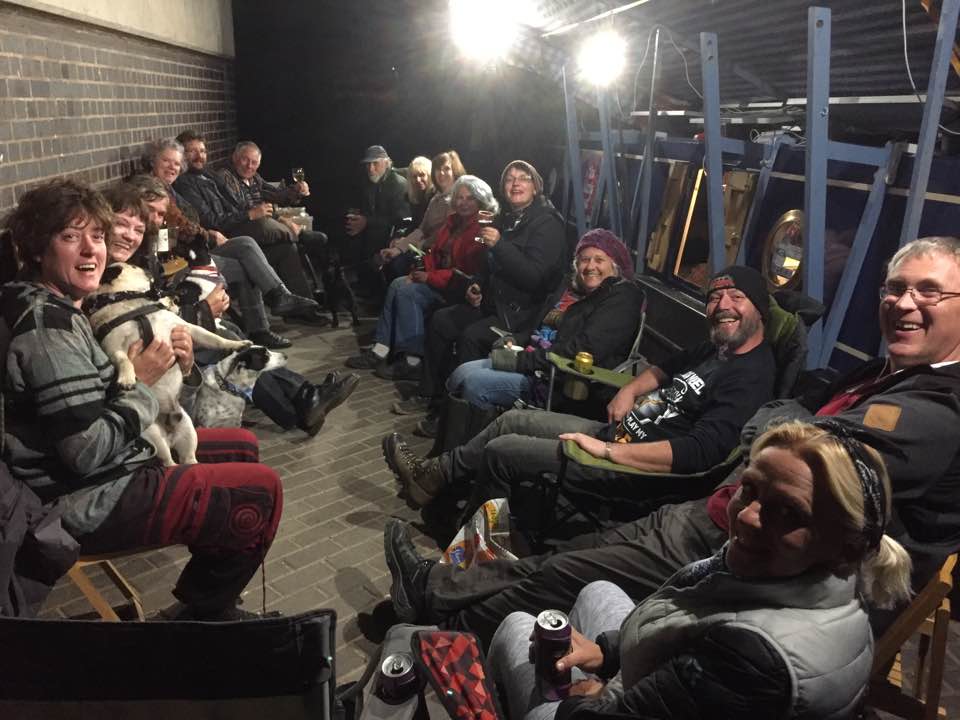 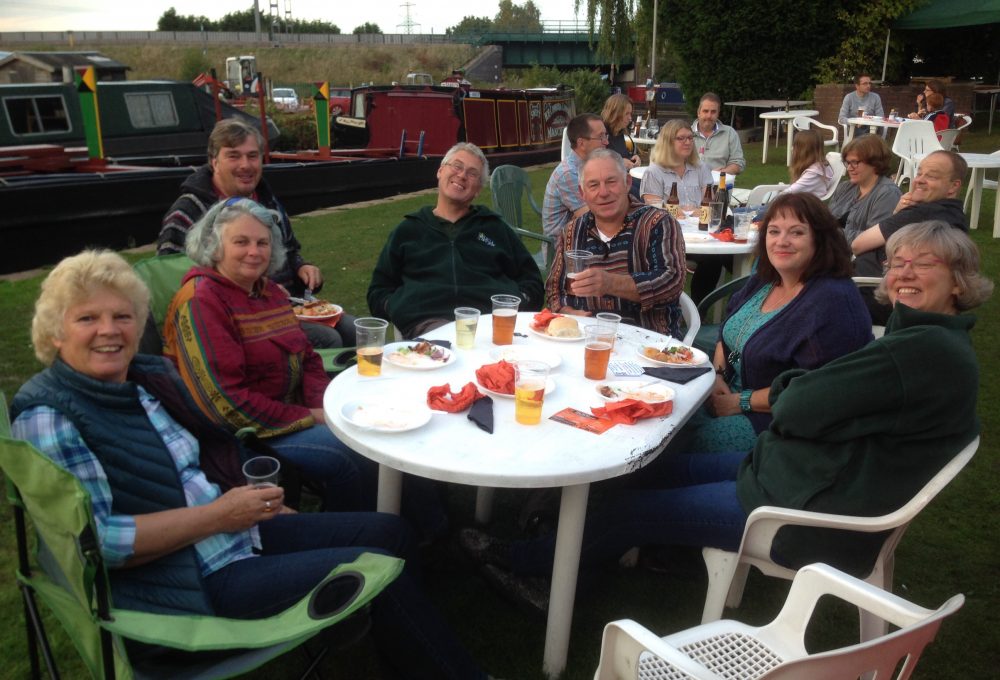 A small gaterhing for the Hog Roast 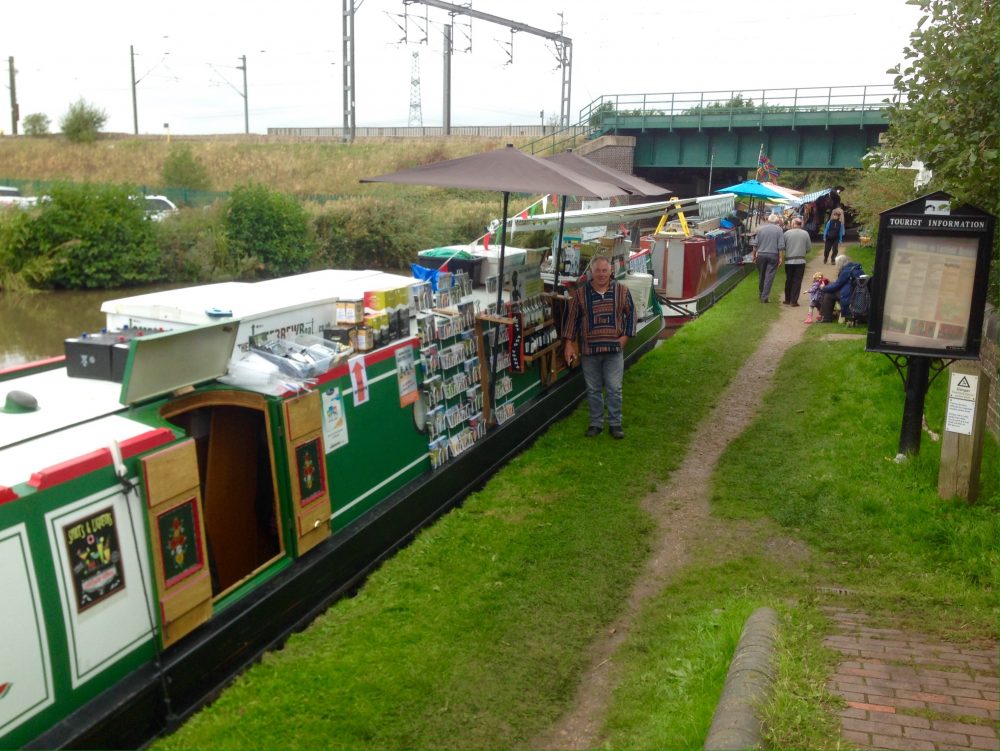 We’re not sure if we’ll be at Huddlesford again in two years’ time – there’s likely to be a number of changes to our trading schedules and businesses in future that we’re still considering.

It was a pleasant weekend, and we applaud those who spent an immense amount of time organising such an event.

We’ll miss spending time with our trading colleagues who all now travel in very different directions until the spring. Some will be taking on paid employment, or like us running a Calendar Club outlet. Two traders we know are doing so – one in Tamworth and one in Redditch.

We’ll both continue with our voluntary ‘work’ for the Roving Canal Traders Association (RCTA), though in a much more subdued form than of late.