September has been full of festivals! On my one weekend at the start of the month without a facepainting booking, I was asked to fill-in for a Silver Wedding Anniversary party after their facepainter let them down at the last minute. Rather weirdly, the event took place at a canal-side pub!If you’re interested, you can read all about it on my Facepainting Blog.

Our fourth year trading at the BCBF, though only my second facepainting – they introduced extra attractions on the canal arm last year which enabled me to participate. The lovely Painting Pixie Louise Walters is a regular on the main field.

A feature of being a weekend trader is unfortunately being at the mercy of the vagaries of mother nature. She chose to provide a mostly miserable weekend weather-wise at Bumble Hole, and our takings reflected this as did other floating traders we know. In fact Sandra Willis, of the Doggie Boat, was so fed-up putting her stuff out and covering it up/taking it in, that on the Sunday she gave up and went to enjoy the festival instead – taking her Golden Boys to the Dog Show and winning two rosettes!

Luckily the BCBF has other attractions than hoping to earn some much-needed income. We astound ourselves sometimes at our fortitude for socialising and ‘working’, though it does eventually take its toll. Four nights in a row we enjoyed some form of entertainment. On the Wednesday evening we had Heidi from The Pirate Boat and Sandra from the Doggie Boat, as well as Helen and Andy from Wild Side, round for six-handed rummy. On the Thursday evening a group of traders partook of the convivial atmosphere at Ma Pardoes. Friday and Saturday night we made the most of the entertainment provided in the festival beer tent – along with a dance or two.

Busyness in between too

On Monday after BCBF, we had an RCTA meeting at Ma Pardoes, as many of the Committee members were at the festival. Following that, I drove to mum’s to stay overnight, as she had an appointment with a health professional on the Tuesday.

Then, on Wednesday 13th September, I fulfilled an item on my bucket-list that’s been itching to be experienced for many years. I did a ‘Canal Art’ workshop – with the incredibly talented Julie Tonkin of ‘Canal Art by Julie‘. I’d mentioned to her earlier int he year I’d hankered after learning canal art, and she organised a ‘paint a stool’ day workshop especially for me. Another three ladies also booked in so she had a full class. Well, I absolutely LOVED it! Of course having been a facepainter for a few years now and knowing a lot about brush strokes and techniques helped. But I wasn’t prepared to produce something as amazing as this …

I suspect I shall be doing more canal art in future – watch this space!

On the Thursday I drove down to Gloucester with Sandra Willis and Sue Meades for our Calendar Club Training Day – not long to go before Barry and I are manning a store at The Three Spires Shopping Centre in Lichfield for fourteen weeks solid! That evening 24 boaters gathered at a local Indian restaurant to celebrate Pete’s 60th birthday. 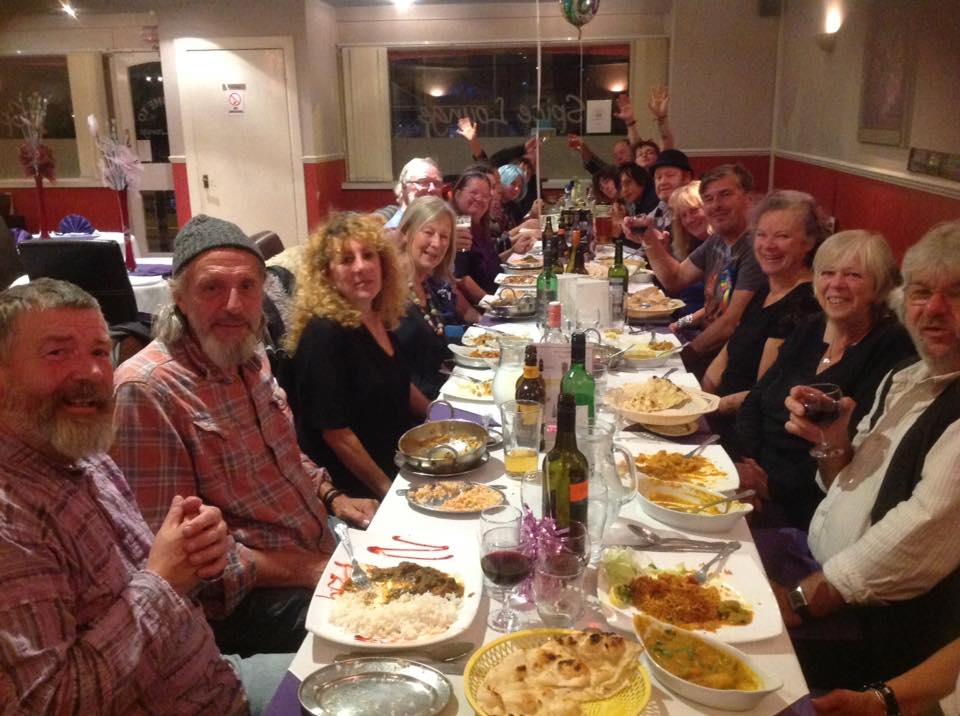 We rather like Titpon. It’s not the most salubrious town in England, and there’s a few scoundrels around (like the one who thought he’d try and pinch stuff out of our top boxes in the dead of night, or the rogue who took the cannon of the Pirate’s boat over the weekend), but generally the people are ‘salt of the earth’ and friendly.

And, importantly, you can get ‘lightly battered chips’ which are heavenly!

It was wet and cold once again, which isn’t helpful, but we made the most of the dry spells.

Barry had a ‘bargain bin’ as he is working on moving some of his stock in readiness for the changes ahead (more on that to come), and the adorable CRT CEO Richard Parry brightened up Sunday for Jules (from The Hippie Boat) and I with his always smiling face and positive attitude.

I did lots of facepainting – including four of the staff from the nearby Fountain Pub. Unfortunately the queue was too long to consider taking photos – if anyone has any please share!

We caught up with Julie and Tony who we’d worked for last year at Calendar Club (no photo again!), and on the Sunday evening walked to The Wagon and Horses to be entertained by an Elvis impersonator who was brilliant.

I drove back to mum’s on Monday morning to take her to yet another health professional appointment that afternoon. This one was amazing. Over an hour with a psychiatrist, who was one of the kindest, gentlest, most understanding and validating doctor I’ve come across. It seems my instincts from the changes in mu over the past nine months or so are right. She’ll be having a CT scan of her brain and then a follow appointment, but it’s fairly certain that she has the signs of early dementia bless her. I’m so thankful I’ve found ways to ensure she has a whole team of support around her. A carer visits each morning for half an hour, she has a hot meal delivered daily Monday to Friday, a Domestic Service from AgeUK each Tuesday afternoon for two hours, and one of her daughters comes to stay every weekend. I suspect between the roof of us, over the last four years, we’ve missed less than half a dozen weekends.

I guess that’s the blessing of having four daughters!

I woke at 7am today and wandered sleepily to the toilet. The image I saw glancing out of the porthole took my breath away. Mother nature had decided to show her magnificence at last!

Hastily throwing a few clothes and boots on, I climbed through the side-hatch leaving Barry snoring. I didn’t want to waste time waking him up – he does like his lie-ins!

We’d arrived onto our fabulous mooring yesterday evening, and had a fun few hours spent with Helen and Andy who are moored right behind us. They’ll be heading back to their land base next week and spending winter there, but we’ll catch up again as we’re staying in this area now until January.

Let’s hope this glorious day is the shape of things to come at the weekend, for our final festival of 2017.

2 thoughts on “Anticipating our final festival of 2017 at Huddlesford”