“So what else happens in Middlewich during the year?” I asked a customer last weekend.

“Not a lot“, was the amused response.

I’m not sure I believe them. The town has always had a friendly and welcoming feel, whenever we’ve visited.

This was our fourth Folk and Boat (that’s where the FAB comes from in case you didn’t know) Festival in Middlewich. And it was full to the brim of magic and music – oh and of course quite a bit of trading by The Home Brew Boat and Funtastic Facepainting!

There were get togethers along the towpath, and much merriment from Thursday to Sunday frequenting The Narrowboat for ‘The Pastry Shoes’ and a jamming ‘open mike’ session, The Boars Head for ‘Earl Grey and The Charwallas’, and Middlewich Narrowboats for two USA bands Billy Lee and The Swamp-Critters and The Roamin’ Jasmine.

We were blessed with warm (aka unusually hot!) days, which meant Barry roasted and turned a few shades of red before becoming bronzed. I chilled calmly, cocooned in my cream gazebo and white groundsheet, nestled under the trees with an occasional breeze.

The Trading days were long but fruitful. And despite feeling like sleeping at the end of each of them, we didn’t want to waste the chance to soak up the festival atmosphere and found fortitude to go out each night. And had a blast (admittedly we suffered afterwards but it was worth every minute!).

It feels like the whole town comes out to party for this long weekend of merriment.

Unfortunately I didn’t get to take pictures of all the fabulous traders this year – many had been before, some were new to the event.

I’m fortunate to have an awesome spot at ‘The Moorings’ for facepainting at Middlewich, and love that so many people return year after year.

Regrettably I failed miserably at getting any images of any designs I’d painted (I’m definitely slacking in the photography department at the moment!), and sadly no-one else posted any on my Facebook page during or after the event.

However, before the crowds came each day I had a bit of time to paint myself – this time my legs were the chosen flesh as it was hot enough for shorts which is most unusual!

A spot of socialising

By Sunday evening I obviously decided I’d better take my phone out and record some of the frivolities! 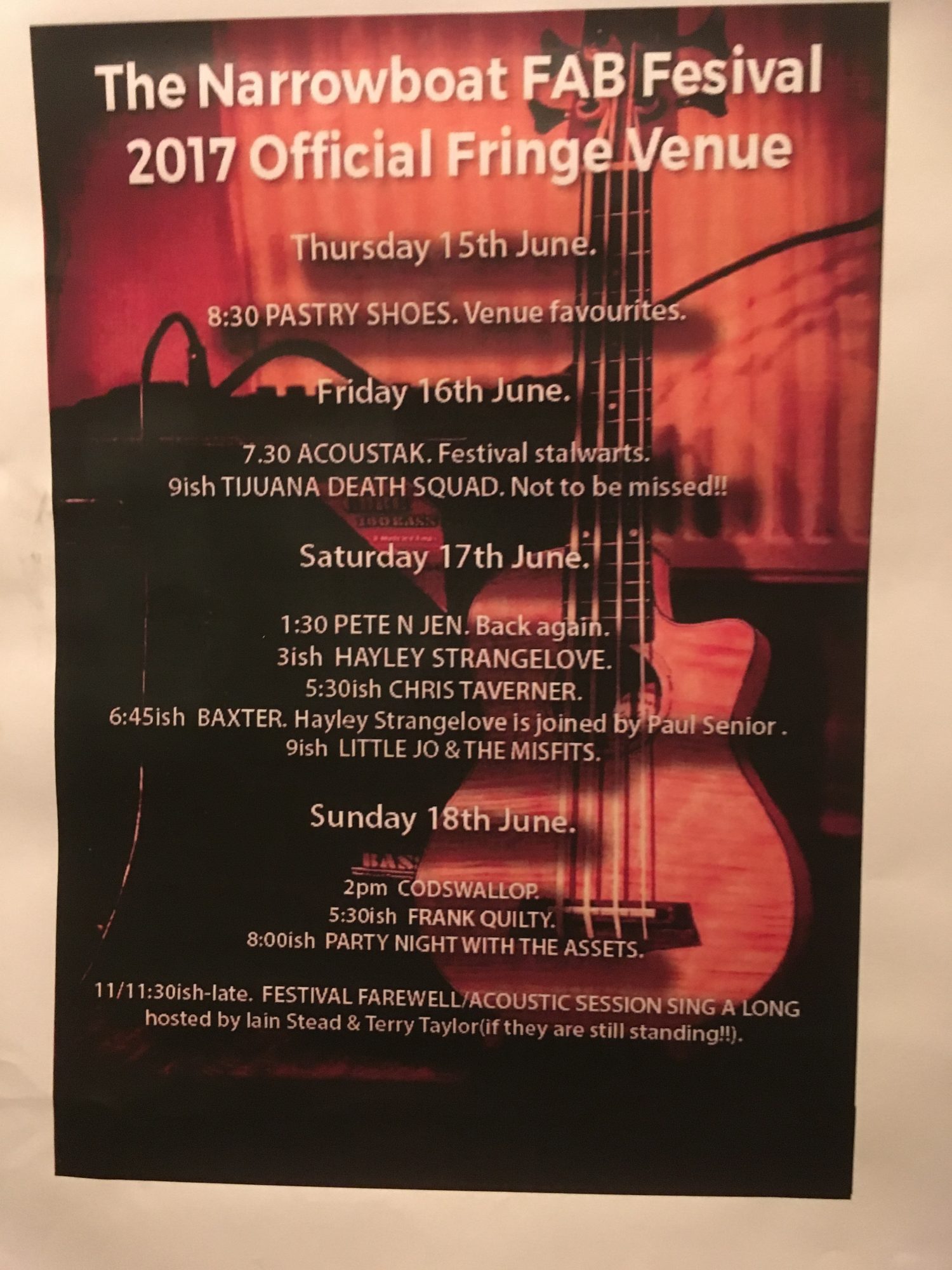 Can you see the error? I wonder was it deliberate – if not it’s quite a big one?!

A bit of bother outside The Home Brew Boat 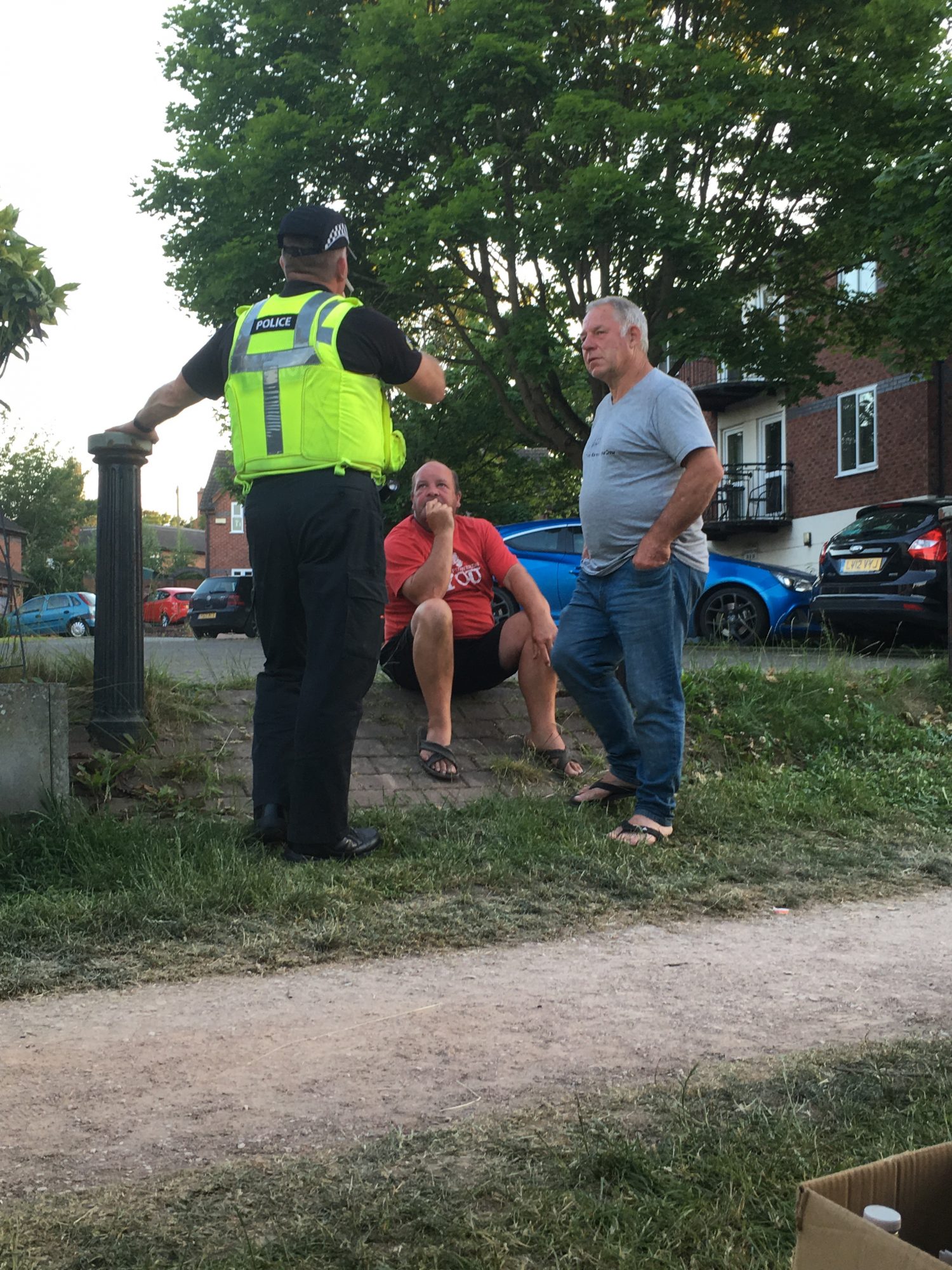 By Sunday evening the boat was feeling decidedly disgusting. The towpath outside was dusty from the heat, and frequent comings and goings with stock and facepainting equipment meant it was trodden all over.

I was inside attempting to salvage the living area from the filth and whilst vacuuming heard a loud commotion outside the side-hatch. Shouting and banging, as if someone had ran into the shelving perched with Barry’s stock.

I peered out and saw a young male pinned to the ground by Barry and a man I didn’t recognise. Shortly after ways two police officers arrived. It seems there’d been an altercation nearby, a knife was involved, and someone ran away closely followed by a member of the public who shouted “Stop that man!” as he approached NB Areandare …

Not a pleasant experience for anyone, but the police handled it extremely professionally and as far as we know no-one was injured – or any Home Brew Boat stock broken!

Onto the Middlewich Arm towards Chester

Late on Monday afternoon we left Middlewich, up the three locks, then a sharp right tune onto the Middlewich Arm where we moored for the night. 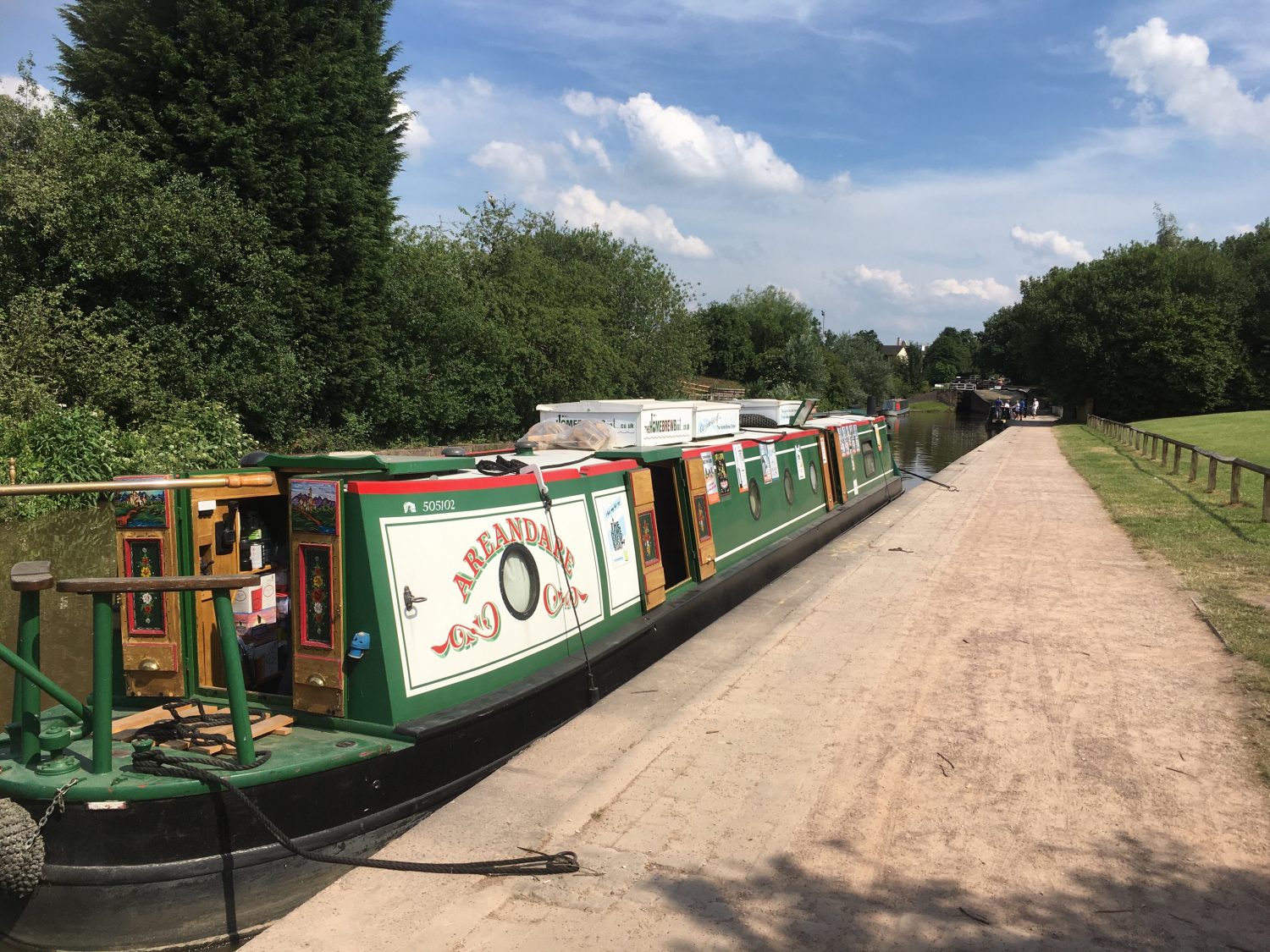 Tuesday and Wednesday were two long days travelling to Chester for the Roving Canal Traders Floating Market there this weekend, with seven trade boats moored from Chester Ring Road Bridge 123d to outside The Lockkeepers Pub, then a small gap to another three boats towards the City Wall Park.

I took a few photos on Wednesday evening, the summer solstice, before all the boats had arrived but they do show the market location quite clearly …

I’m taking the rare opportunity to spend time with my daughter and grandchildren, an hour’s bus ride away in Malpas, while Barry sells his wares for the weekend and I’m sure there’ll be a bit of socialising going on in my absence …

We’ll be staying in Chester for a while, as we have two dear friends arriving from New Zealand on 2nd July for a week’s craziness on the canals, and we want then to see the city we love.