There’s something very special about this small town; it has a most endearing feel. Having spent a fair amount of time here since 1998, when my mum and dad relocated from Sutton Coldfield, I’ve got to know its nooks and crannies rather well. Every time we came back for a holiday from New Zealand we’d stay here.

Now we’re Floating Traders, so subsequently having experienced the town and its people as such for a few years, I love it even more.

This year the St Richard’s Canal Festival was organised and managed solely by the Worcester-Birmingham & Droitwich Canals Society. Previously for my Facepainting pitch I’ve liaised with the council. So we did wonder if we’d see any noteable difference in footfall.

I’m thrilled to report it was as amazing as ever. The footfall was fabulous. Even the weather behaved better than last year – though good old Mother Nature still managed to squeeze in most varieties during the three days. We just didn’t quite get snow or hail – though there were a number of rather uncomfortable times when it felt cold enough to! 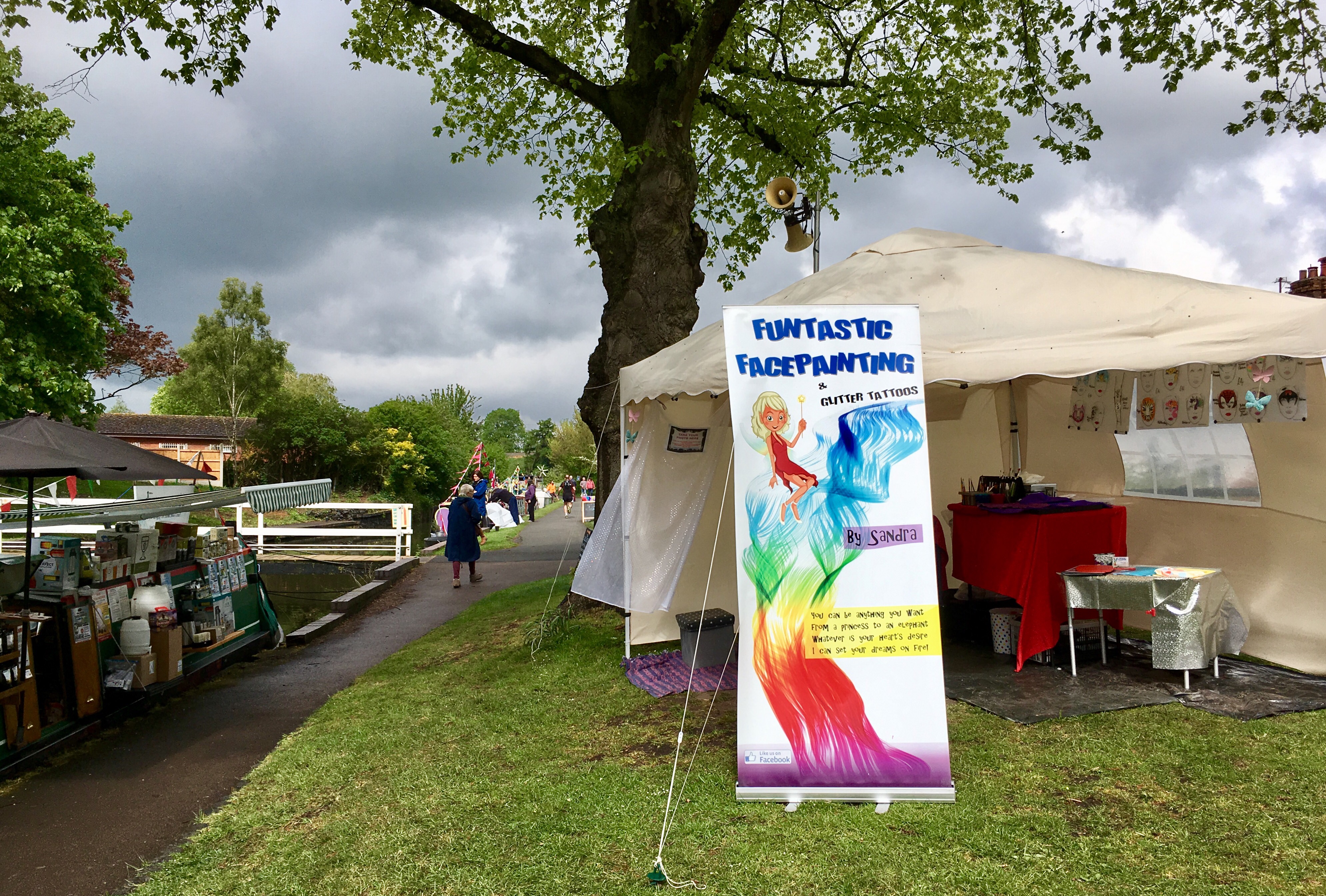 All set up on Monday morning – note the ominous looking clouds in the distance! 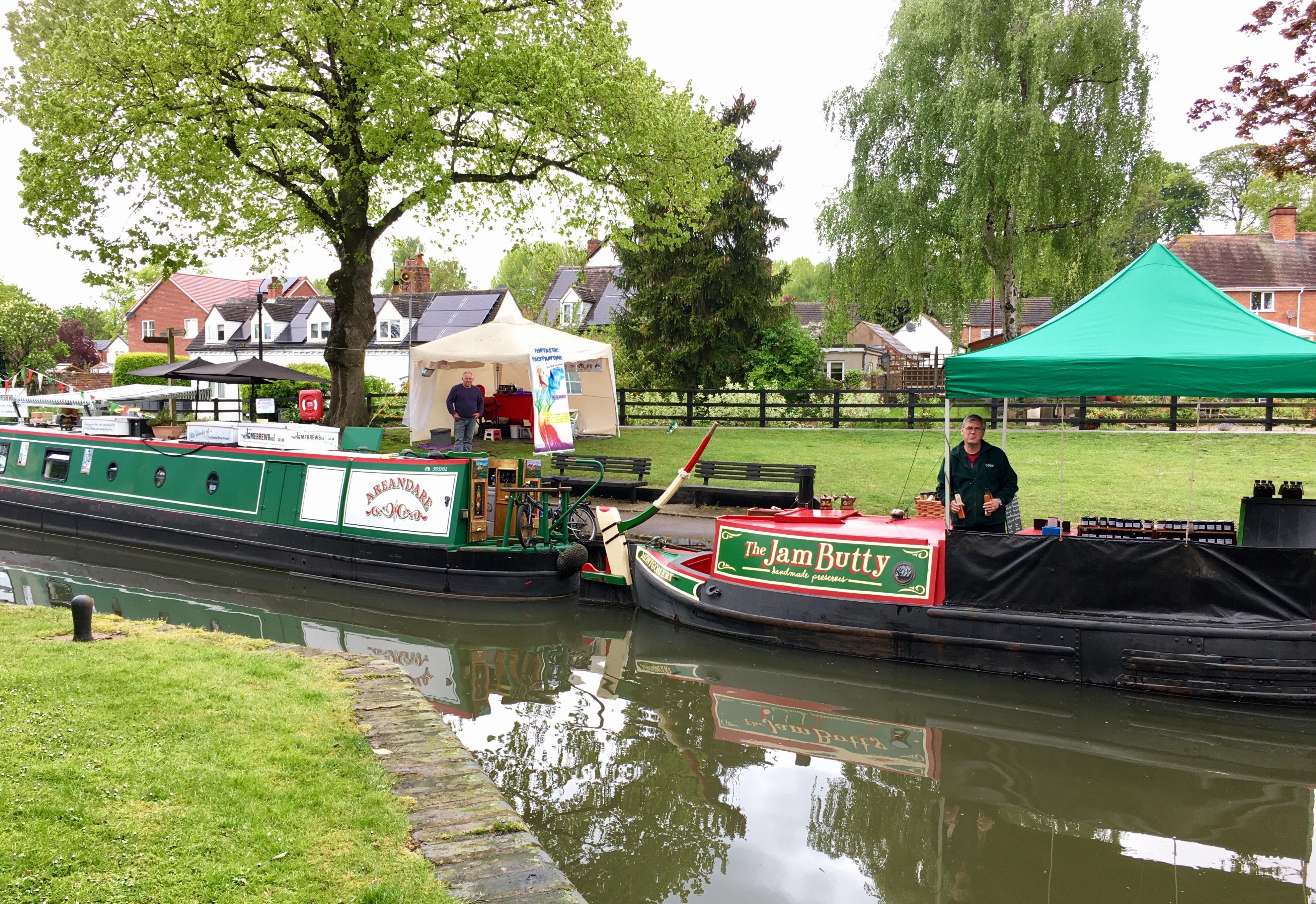 Snug little group – The Home Brew Boat, Funtastic Facepainting, and Wild Side with The Jam Butty 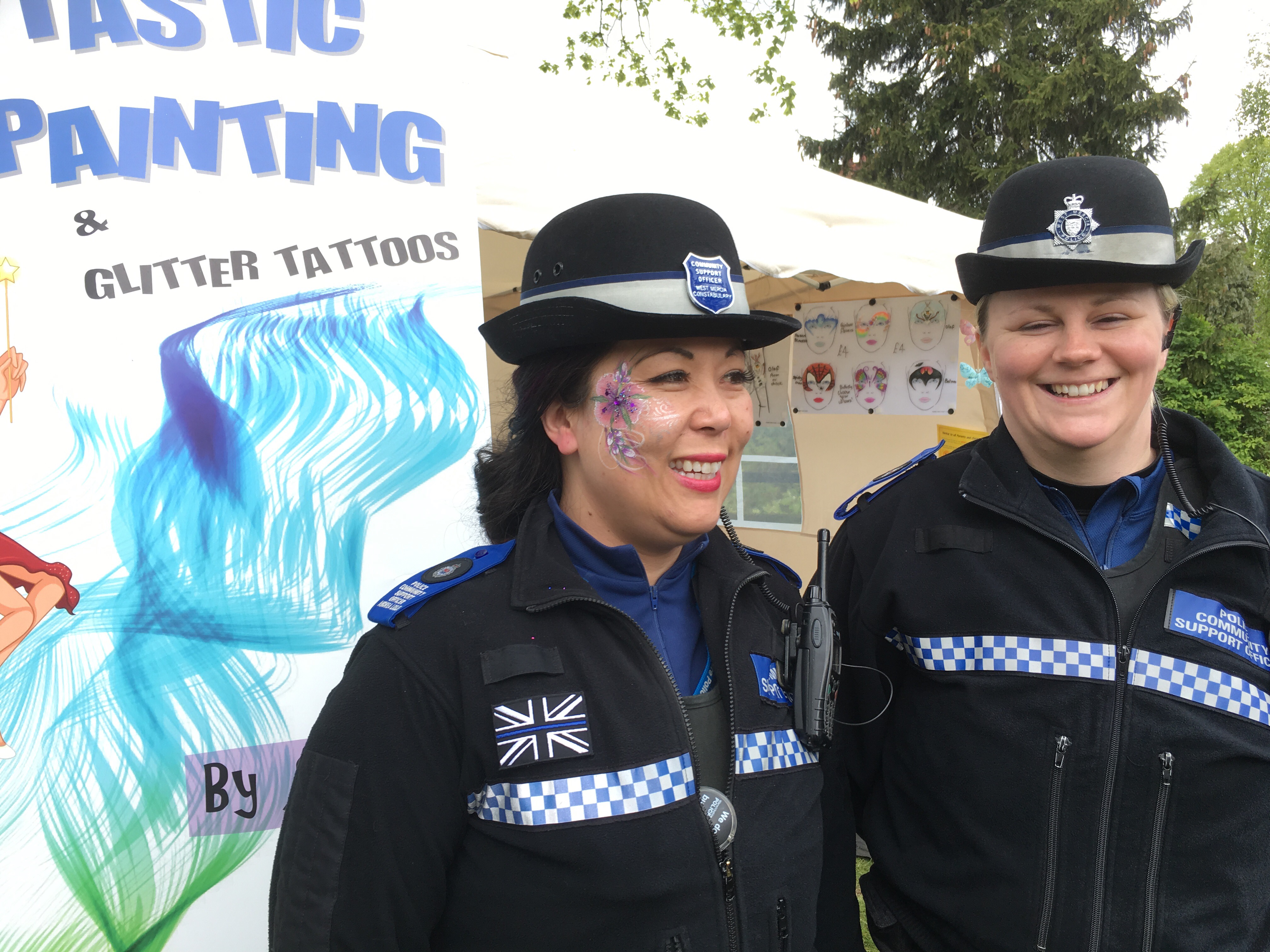 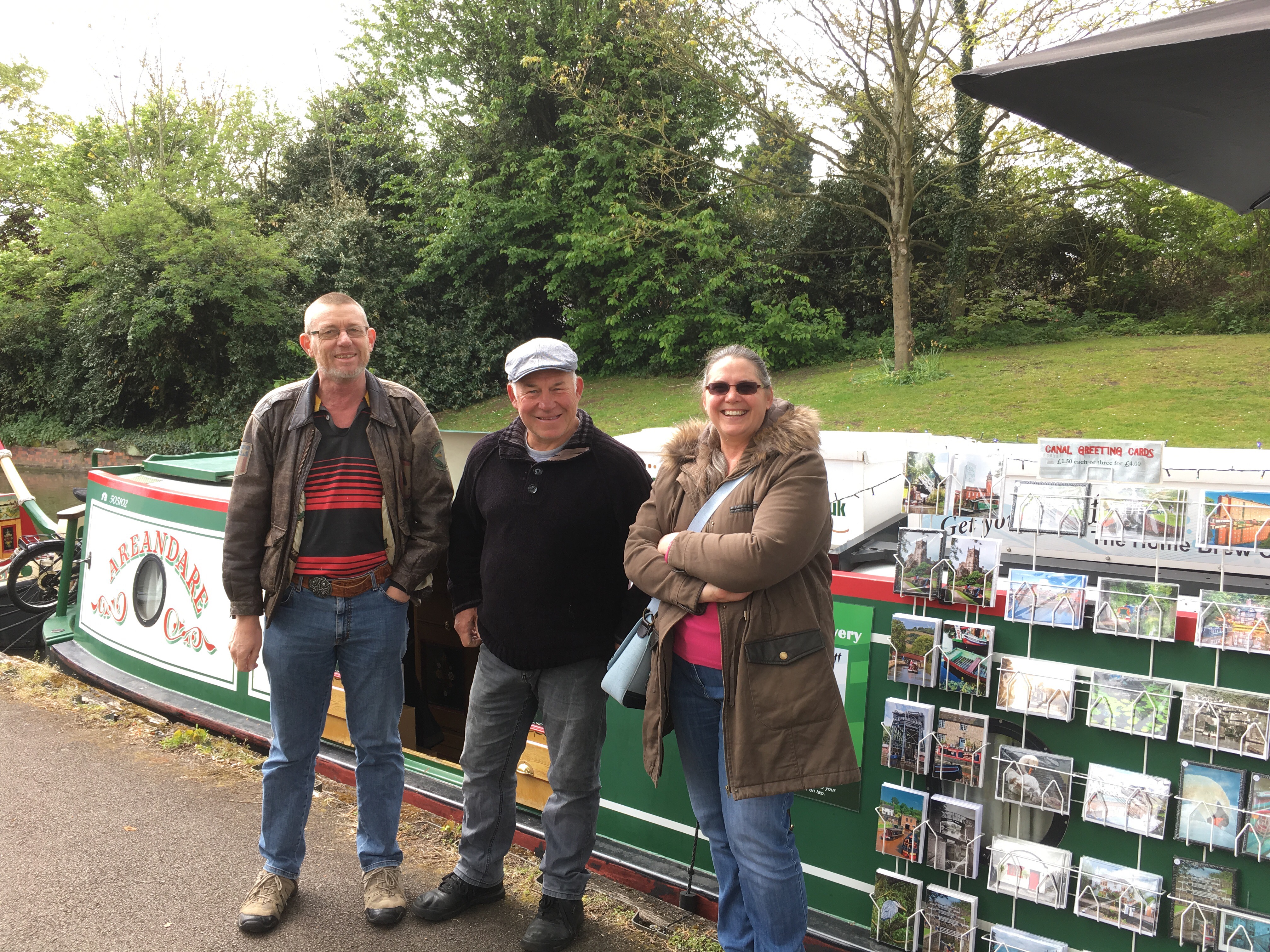 Andrew, Barry and Michele catching up

We caught up with a few familiar faces such as the adorable Richard Parry, CEO of Canal and River Trust who rarely misses a canal festival – even on a Bank Holiday weekend Sunday. He’s got an infectious enthusiasm for focussing on sustaining the Inland Waterways of Great Britain and we always appreciate chatting to him.

Andrew and Michele are fellow kiwis who we haven’t caught up with in person for a couple of years so it was great to see them too. Albeit briefly as half way through chatting I had to abandon them to magically transform a child into something or other.

Barry and Andy returned to the beer tent on Saturday evening; Dawn and I chose to stay on board and get an early night. Previous years The Reflections have played but unfortunately this year due to ill health they’re not performing at all. Had they been, I would undoubtedly have been dancing the night away as they are totally brilliant.

We had a gentle gin and tonic evening aboard Wandr’ing Bark on Sunday, to say farewell for now again to our dear friends. They’re going south for the summer and our itineraries don’t synchronise again until Blisworth mid August.

Dawn left us on Sunday morning, then on Monday evening our nephew arrived for a few days mini-break. Actually he’s getting rather a lot of fresh air and exercise on the journey to Birmingham – 50 locks all told from Droitwich! Twenty done and dusted now, and we’re moored up by The Queen’s Head this evening near Bromsgrove. We’ll pop in for a pint tonight. It’d be rude not to! Lesley and Ray from ‘Crafts by Morgana’ are on the same route and will join us. 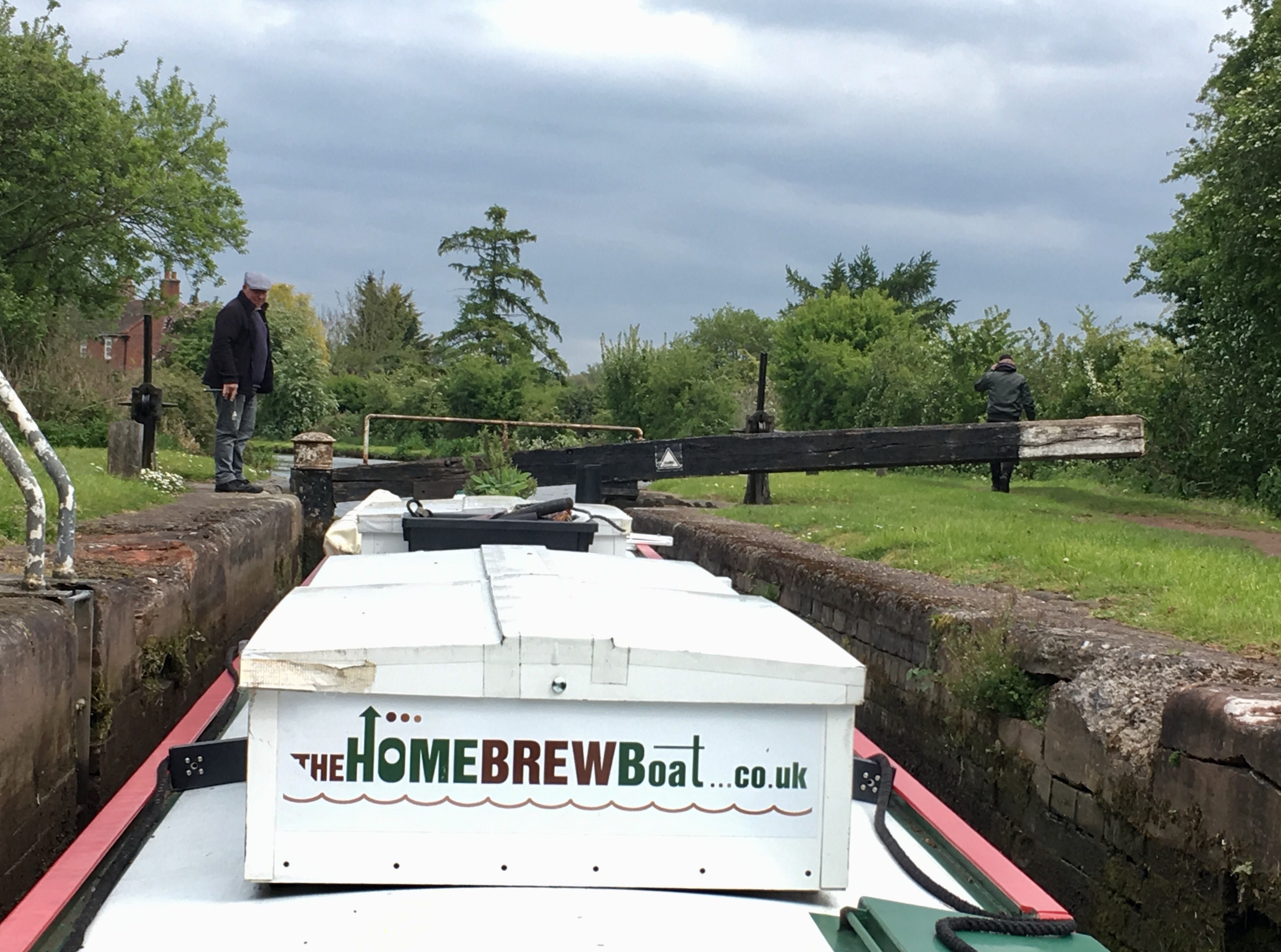 Heading towards the Tardebigge flight which we’ll do tomorrow …

I’ve been car and boat hopping since leaving Droitwich, a challenge I’m not keen on at the best of times. I can’t comprehend why anyone would want to keep a car travelling with a boat.

Each to their own.

Anyway, the reason is I’m on a ‘Speed Awareness’ course tomorrow in Worcester. Driving away from our family holiday at Northmoor House in February, a rather vicious looking policeman thrust his speed gun at me as I turned a corner. There was no other traffic in sight, not a built up area, but a 30mph limit and I unfortunately was travelling at 35mph. My younger sister and nieces’ partner had exactly the same experience. Funny that! Could it be a money making venture by the local constabulary who have little more to occupy their time in such a sleepy place? An expensive error on my part. Damn!

On Friday I’ll drive Matt home to Lichfield, take the car back to Ombersley, get a taxi to Droitwich or a bus to Kidderminster, depending on timings (are you keeping up?!) and finally a train into Birmingham where Barry will be ensconced once again.

We’ll stay in Birmingham over the weekend where we’re going to have another visitor overnight. An active seven-year-old this time. Marvellous.

No time for boredom on board Areandare …

2 thoughts on “A Funtastic time in Droitwich ”