I first discovered ‘Calendar Club‘ at the end of 2013 when searching for a calendar with five columns to record our various events and commitments.

One column for me. One for Barry. And one for each of our three businesses.

Eventually I found the perfect one.

I discovered another suitable calendar in the same place. A no frills one, specifically for Barry to keep on the boat.

For the following two years, wherever we were moored, I searched for the same outlet – and bought them again.

Little did I realise that in 2016 Barry and I would be working for this organisation, albeit self-employed contracted by fellow narrow boaters.

Having so much time to get familiar with their impressive range, in 2017 I even branched out and changed our calendar selection! In fact I chose to return to a paper diary, rather than the five-columned-calendar. It’s got enough space for all my current activities and businesses, AND is small enough to fit in my handbag to accompany me on frequent family trips.

I also diversified for Barry and the boat, selecting a ‘You & Me’ slim calendar. One column each.

Barry has a ‘make a plane a day’ desktop calendar (though he hasn’t managed to maintain a daily ritual, there’s quite a collection ready for grandsons and other youngsters to keep them amused whilst on board).

Our grandson has a ‘Guinea Pig’ calendar.

And mum has a ‘nudiknits’ one.

My daughters have a left handed diary and a family planner.

A novel way to top up our self-employed income

As floating traders, our festival season (mostly) comes to a close at the end of September. For the past few winters we’ve hoped our businesses would continue to support us.

Finally, last year, we decided to face the stark truth that sadly they weren’t, and we needed to seriously seek strategies to increase our income through the bleak UK winter months.

A couple of years ago we’d chatted to a young (ish!) couple living on a narrowboat, who told us they’d worked for Calendar Club in Sutton Coldfield, the town I grew up in and raised my two daughters. It was hard work but well worth it, they said, for the short period of time you had to commit to. But that if they did it again they’d employ some help so they could have a bit of down time.

Fortunately we bumped into Tony and Julie again early last year, and Barry asked if a/ they were doing it again, and b/ if they were looking for help. As luck would have it the answer to both those questions was affirmative. So a deal was struck and Barry knew he’d be working Wednesdays and weekends at Merry Hill from early October to early January.

I’d imagined I could return to midwifery without too much stress, and dip my toe in as a bank or agency midwife to earn some extra when we needed it. That wasn’t a terribly successful plan!  An unmitigated disaster actually. But hey ho. I tried.

Around the same time as I walked away from the course, another floating trader (Sandra Willis from The Doggie Boat) had made the move to join Calendar Club too, after meeting Tony and Julie at a festival in Tipton. I thought I’d see if she wanted a very part-time hand with the store.

Three months of graft and giggles

Calendar Club was a gift of a resource for us, suiting our circumstances perfectly.

Selling is what we do, and it’s so simple when we sell things we believe in (like home brew kits and facepainting of course!). I was buying calendars from this company for three years before I worked for them!

Admittedly it was a mighty commitment, packed into a three-month period.

However, it was also fascinating and fun. I loved meeting the customers and chatting when it wasn’t too busy. At the beginning neither of us had half a clue about who most of the celebrities were – apart from the more well-known like Elvis and Cliff Richard (both of whom continue to be best sellers!). It was quite an education discovering some of the current stars and singers.

Someone came up to Barry and asked for a calendar of Anton Deck. Well that’s what he heard …

Ant and Dec never made it to New Zealand – Julie says she could hardly contain herself when Barry told her and it took a while before she could stop laughing and explain who they were after (they didn’t do one by the way!).

Calendar Club are a huge organisation, with their Head Office not far from my younger sister in Exeter. They have Territorial Managers (TAs) all over the country who help each ‘pop-up’ shop or Mall Unit to put their store together and take it down. They’re always at the end of the phone between times, and will also drop in unannounced generally to see how the store manager is getting on.

Stock is delivered frequently, generally depending on sales. During the early weeks especially, new ranges come out; or calendars of celebrities or football clubs who have been delayed for whatever reason getting theirs out.

There’s a recommended way of displaying all the calendars, and stores are guided and encouraged to make up gift packs which give 10% off. Some weekends (not publicised in advance), there will be a buy one get one half price deal. And of course after Xmas there’s a 40% off everything (except gift wrap and perpetual stock). 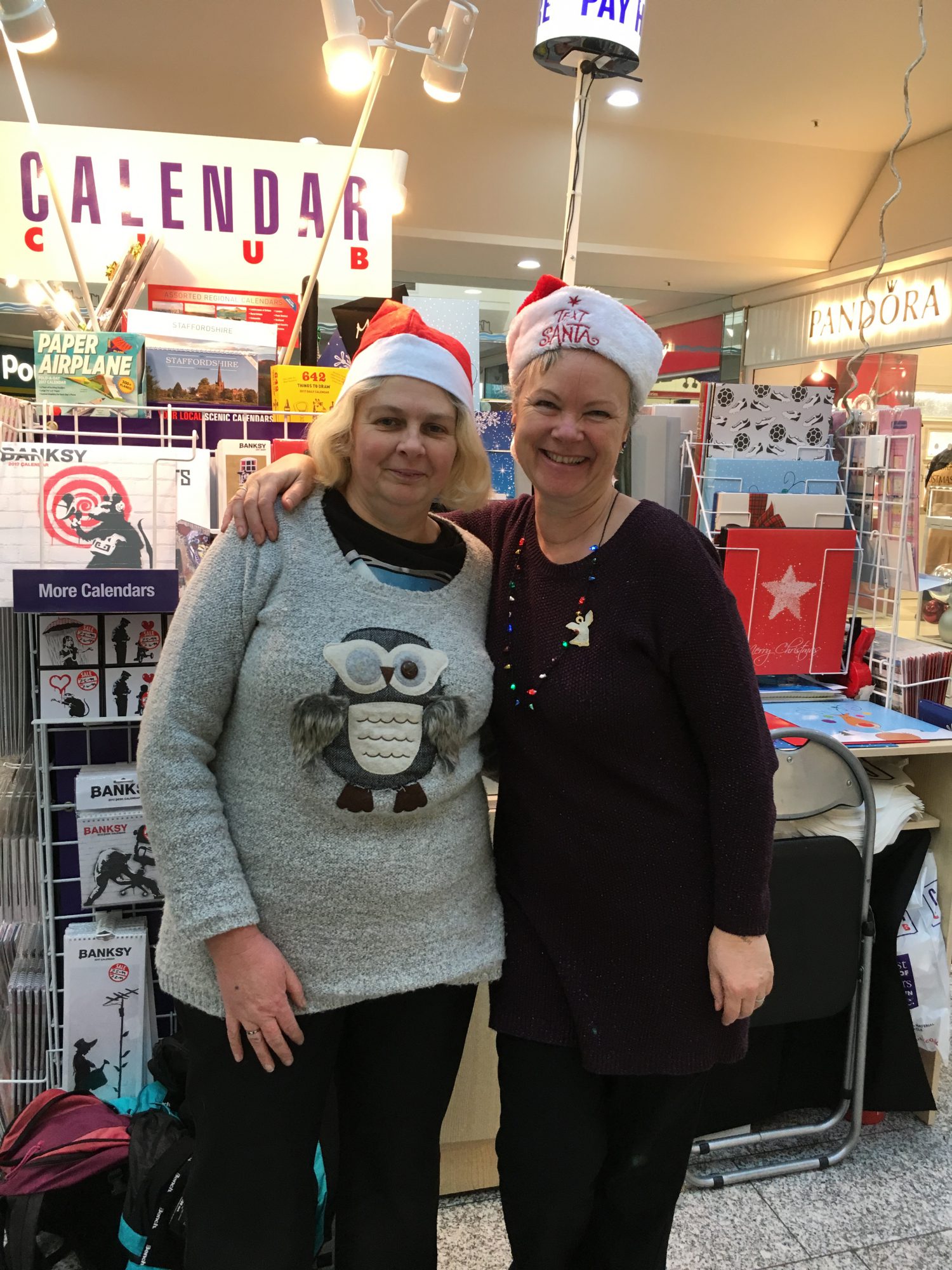 Surrounded by Calendars of all shapes and sizes

You can’t comprehend how diverse the range of calendars sold are. There’s:

~ An assortment of cars, planes, trucks, bikes and trains

~ To tickle your fancy there’s derrieres, silhouettes, totally naked, inked ladies, front and back, The Sun girls – for the men. For the women there’s tattooed torsos, hottest guys, black, firefighters and dreamboys

~ A preponderance of football teams – some stocked all over, others were targeted to the area (Birmingham City, West Bromwich Albion, Aston Villa and Wolves particularly where we worked)

~ The most expensive calendar was someone we’d never heard of – Pete Wicks at £13.99! And he sold surprisingly well – more on that to come … 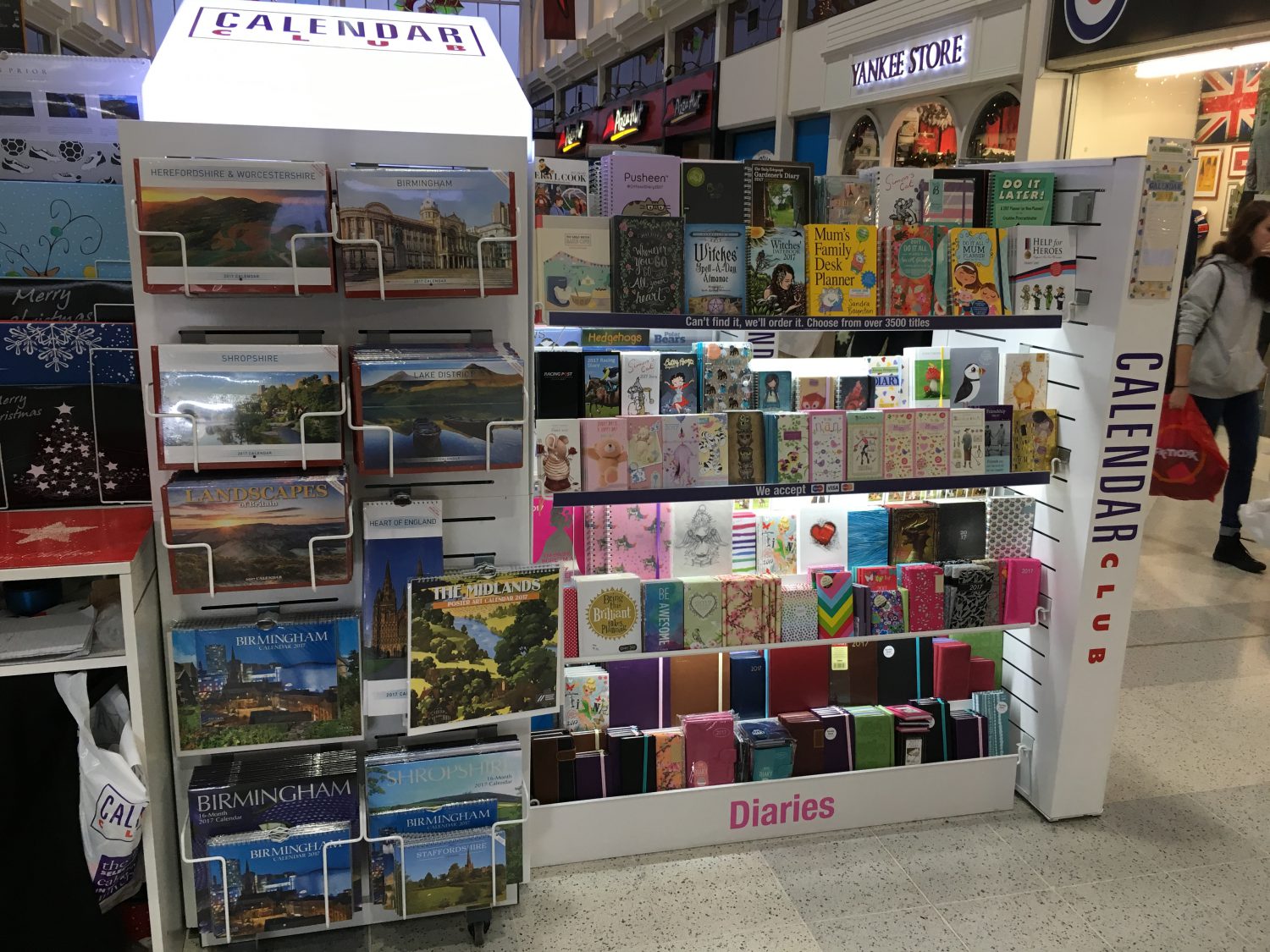 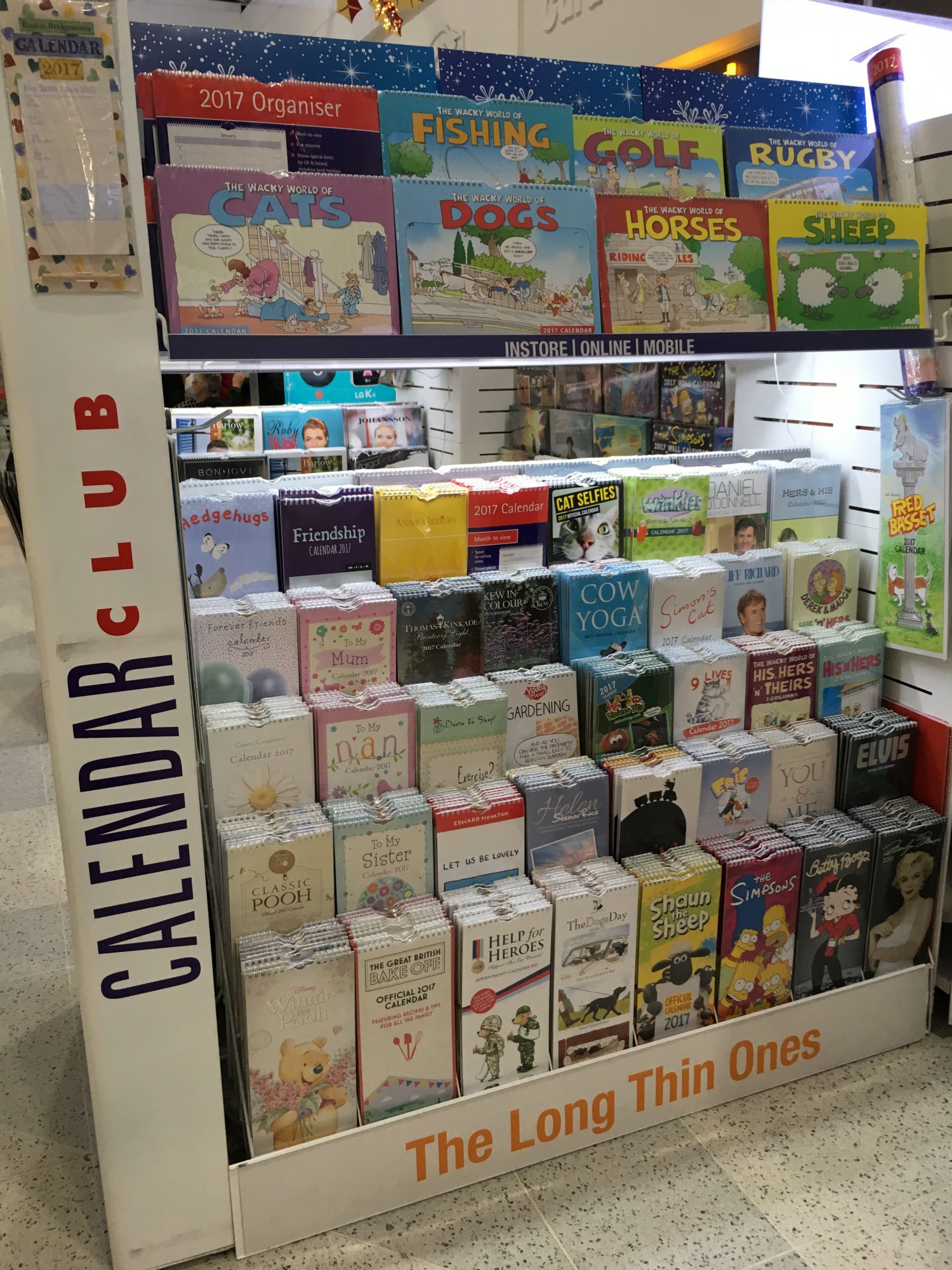 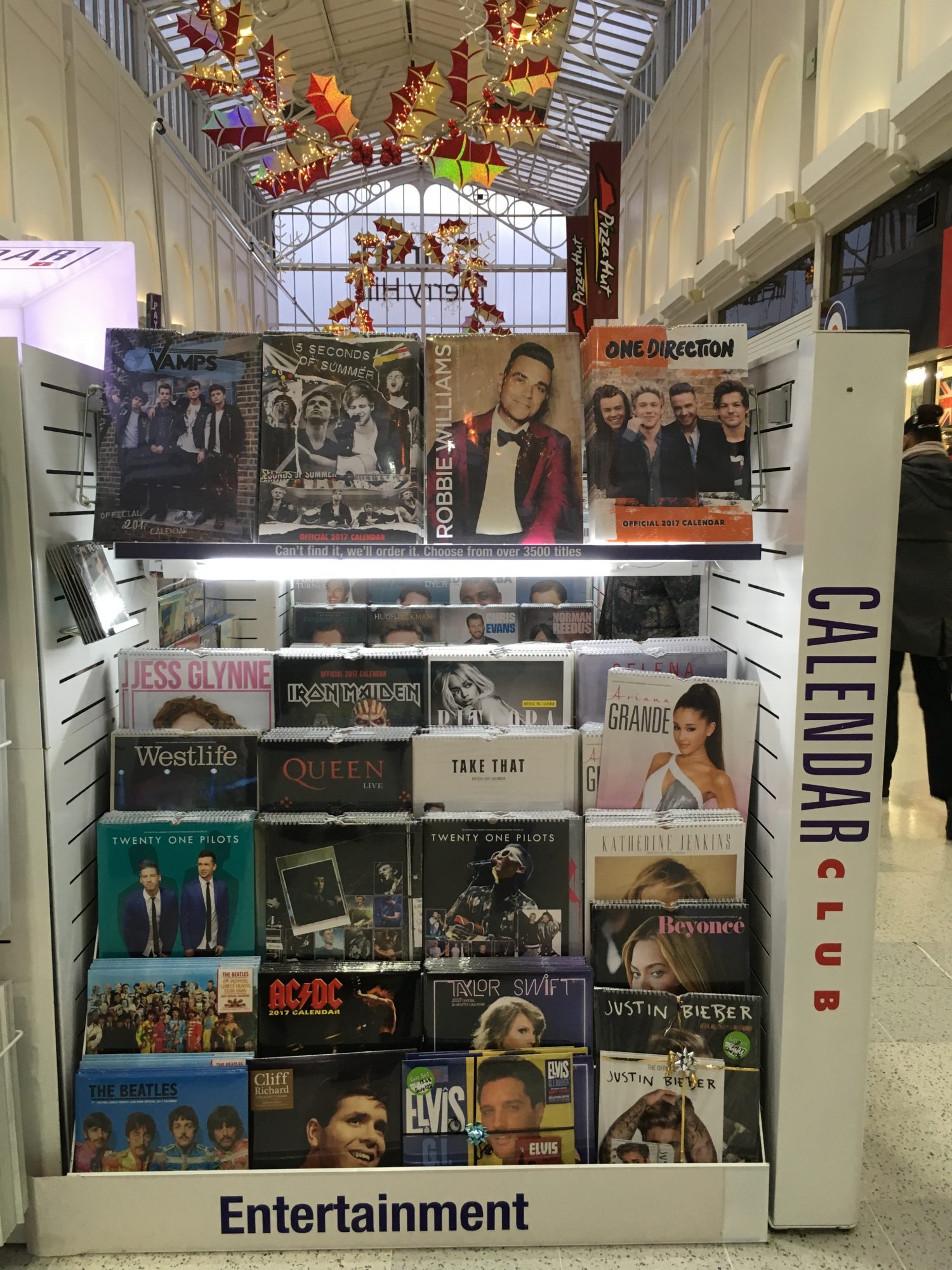 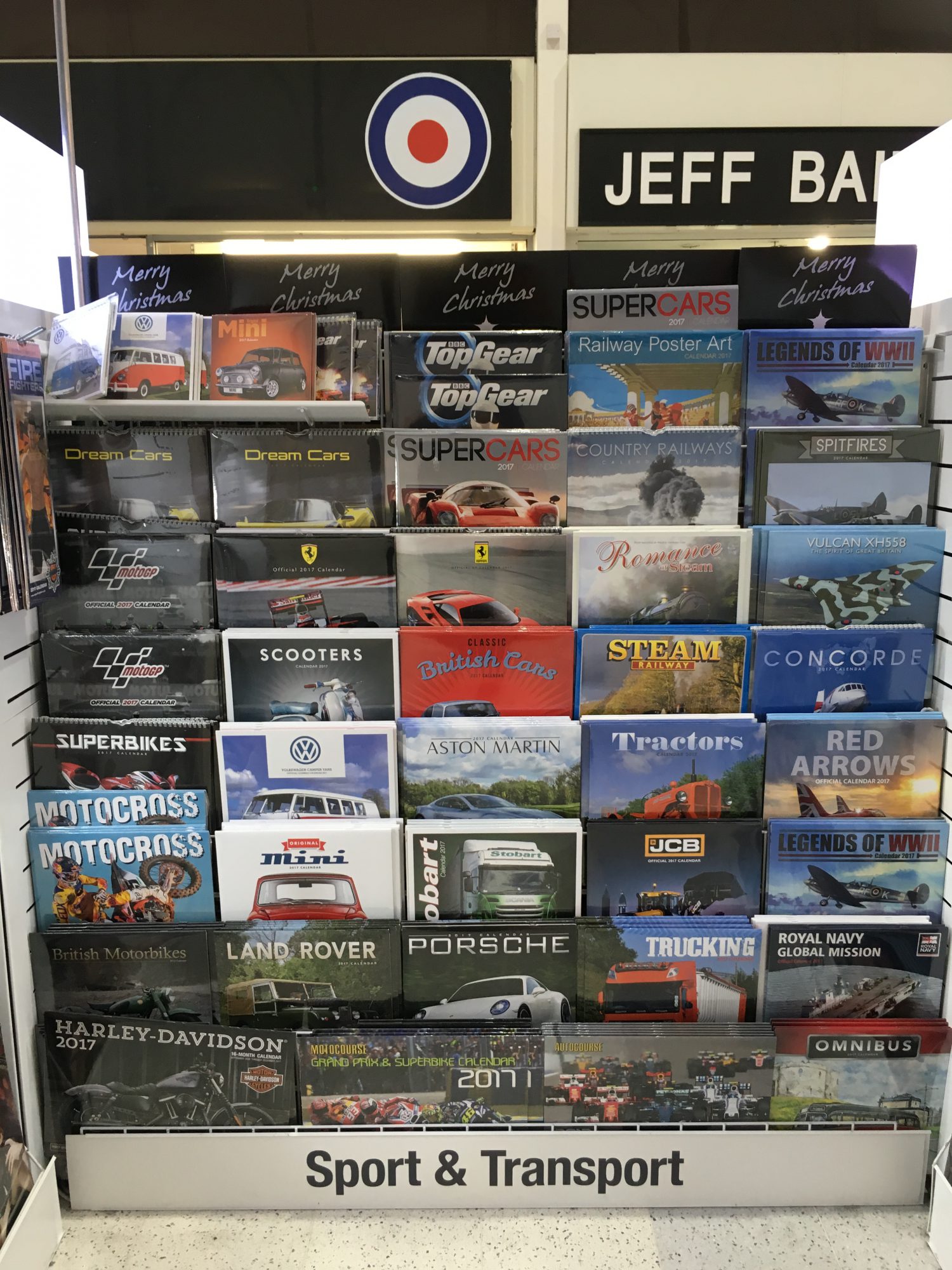 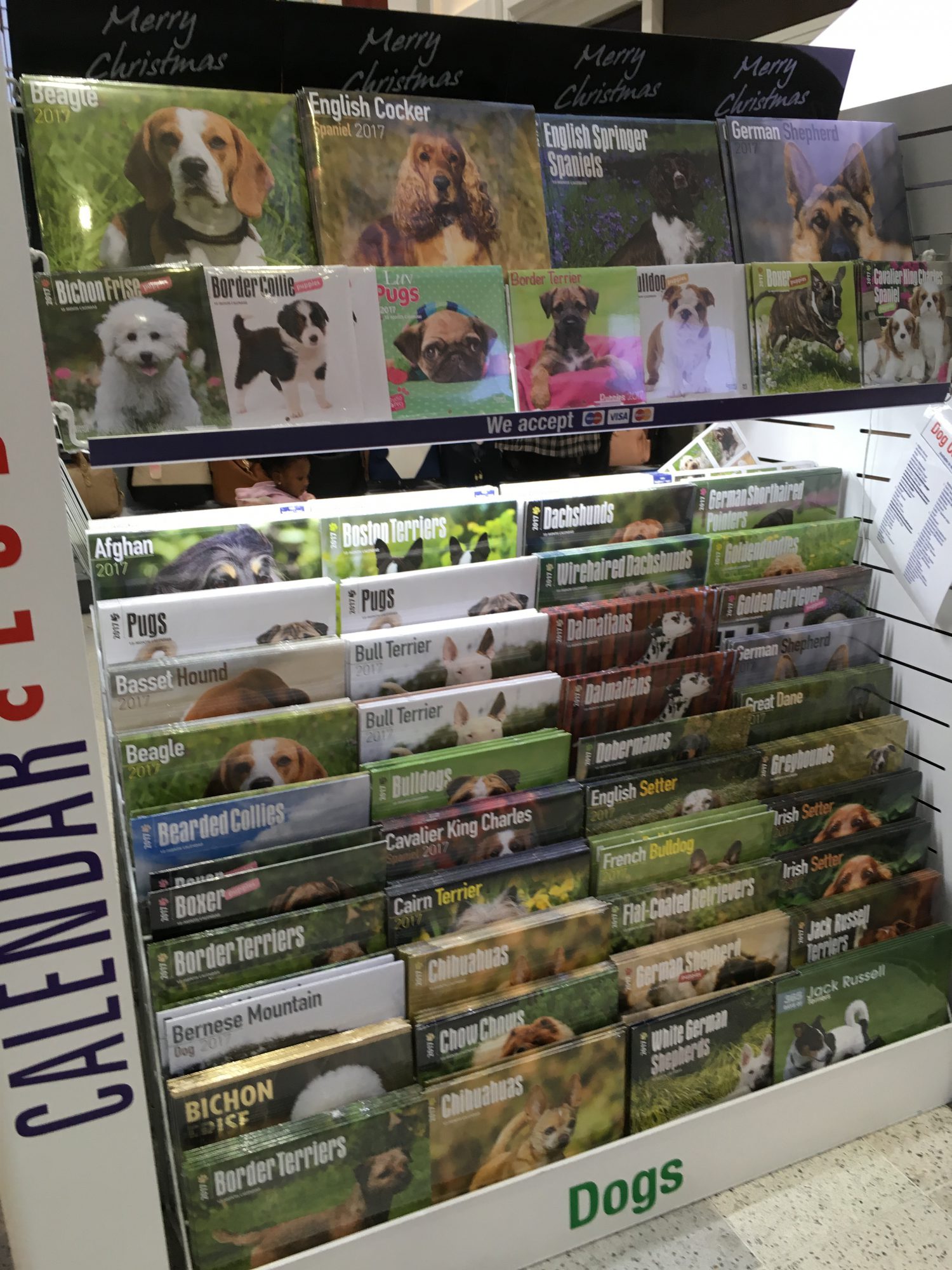 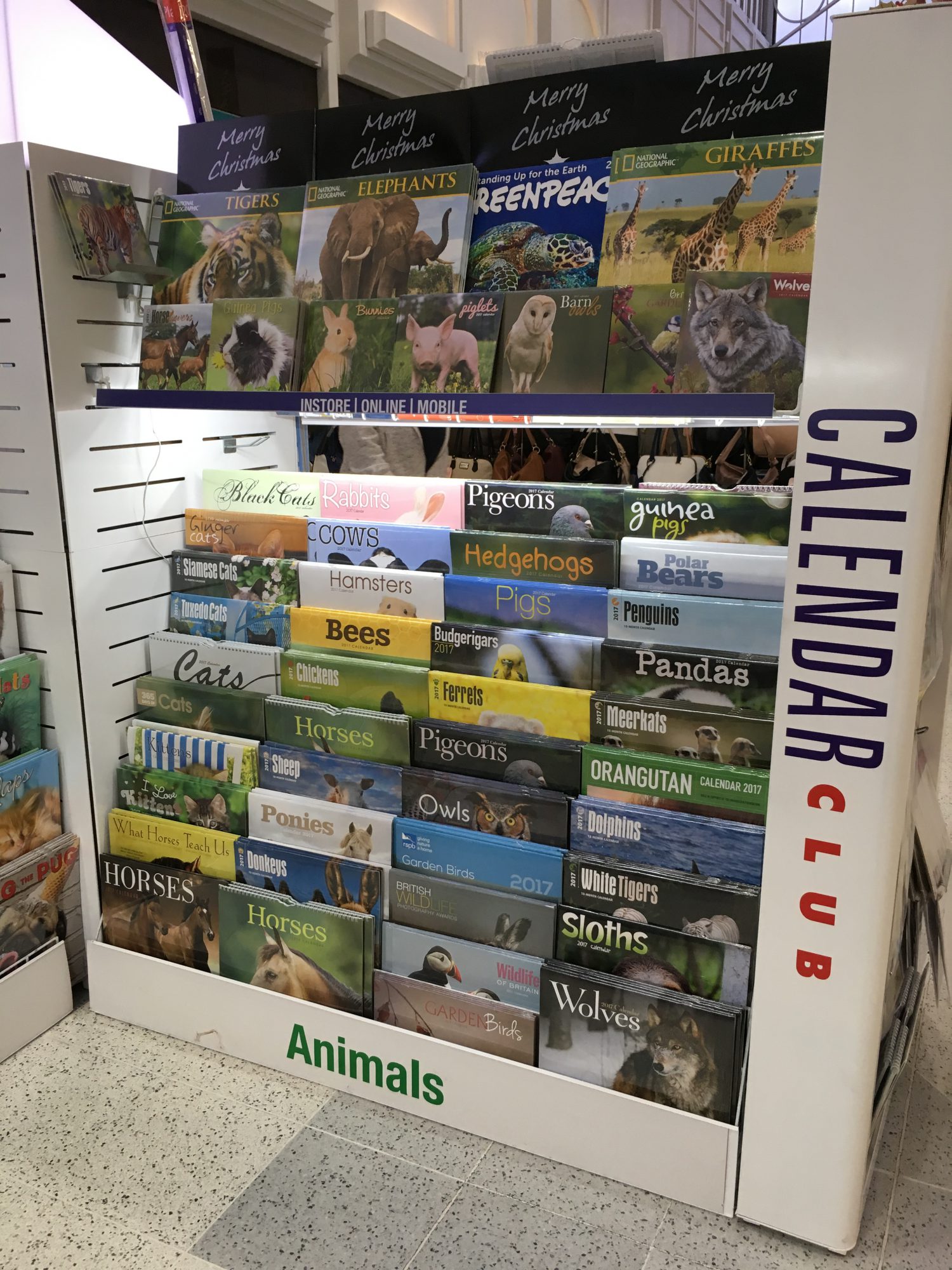 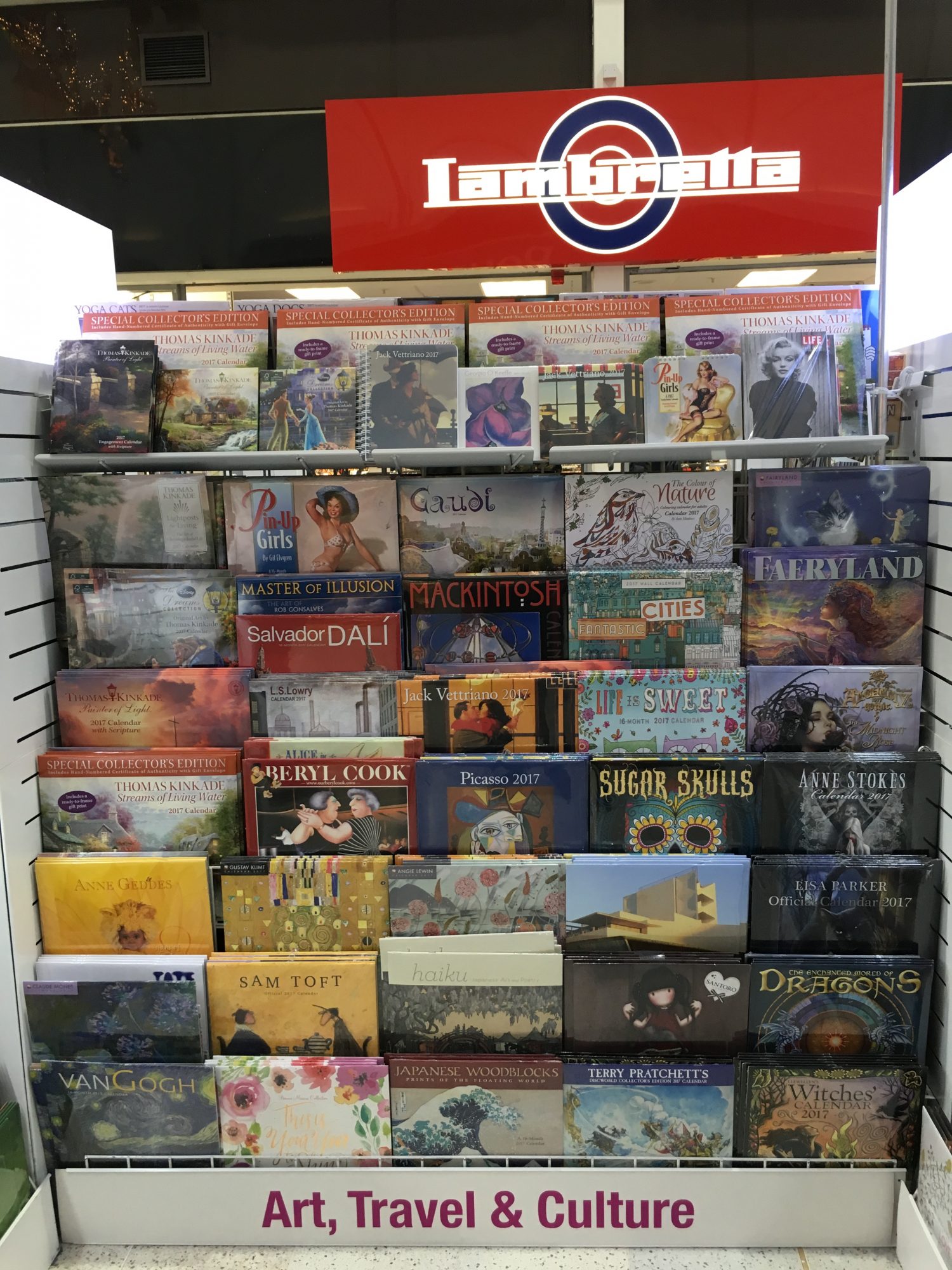 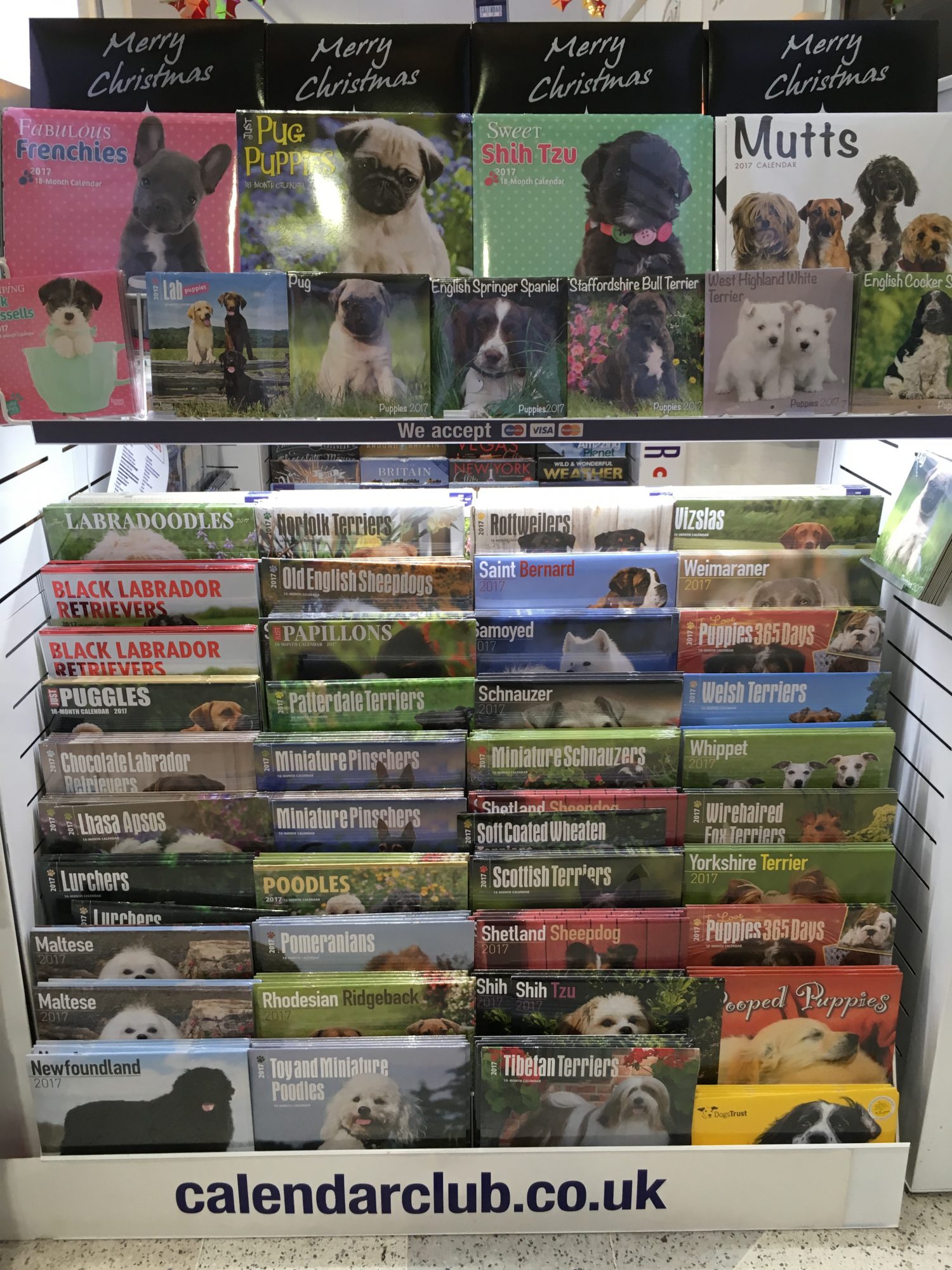 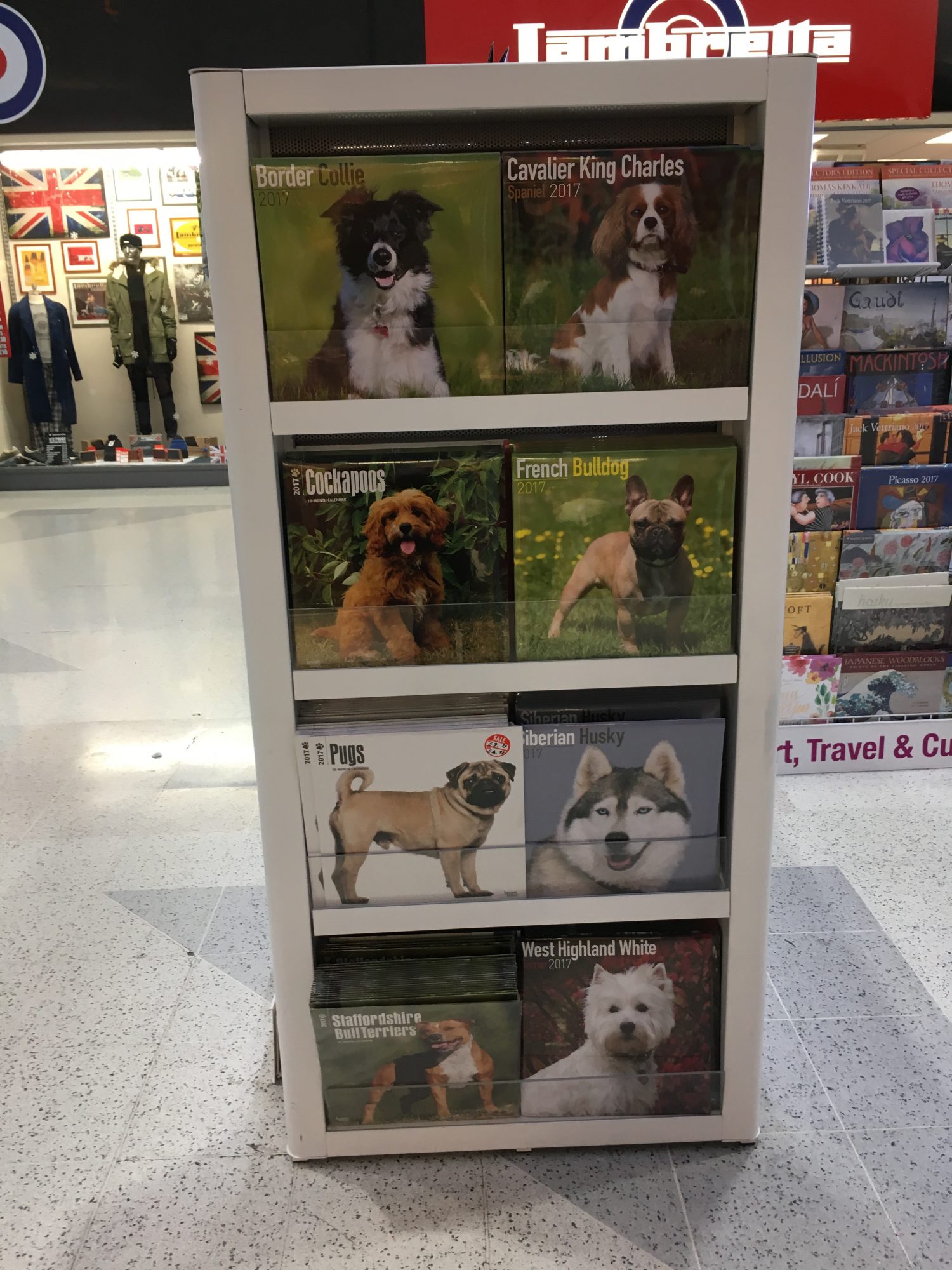 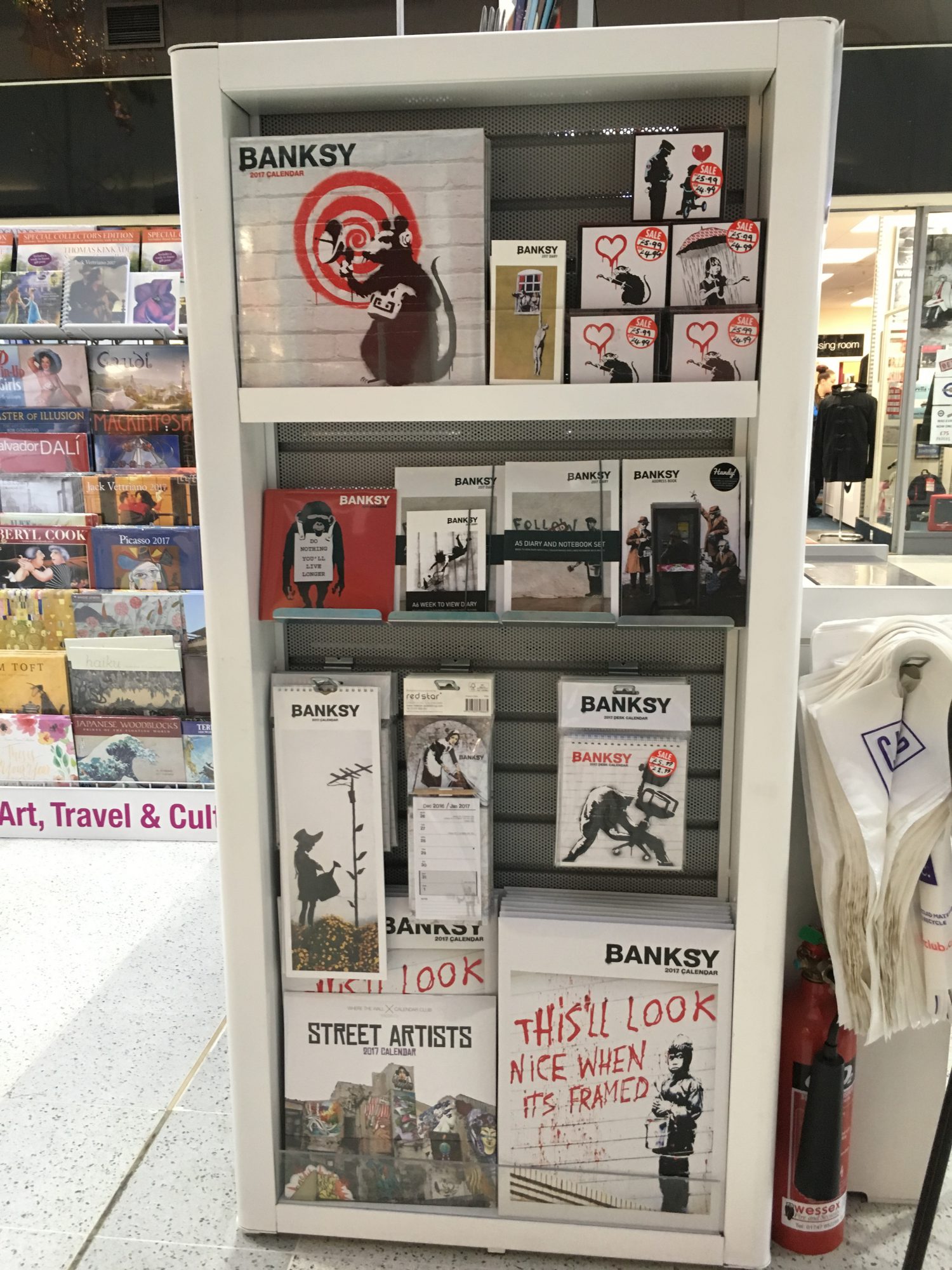 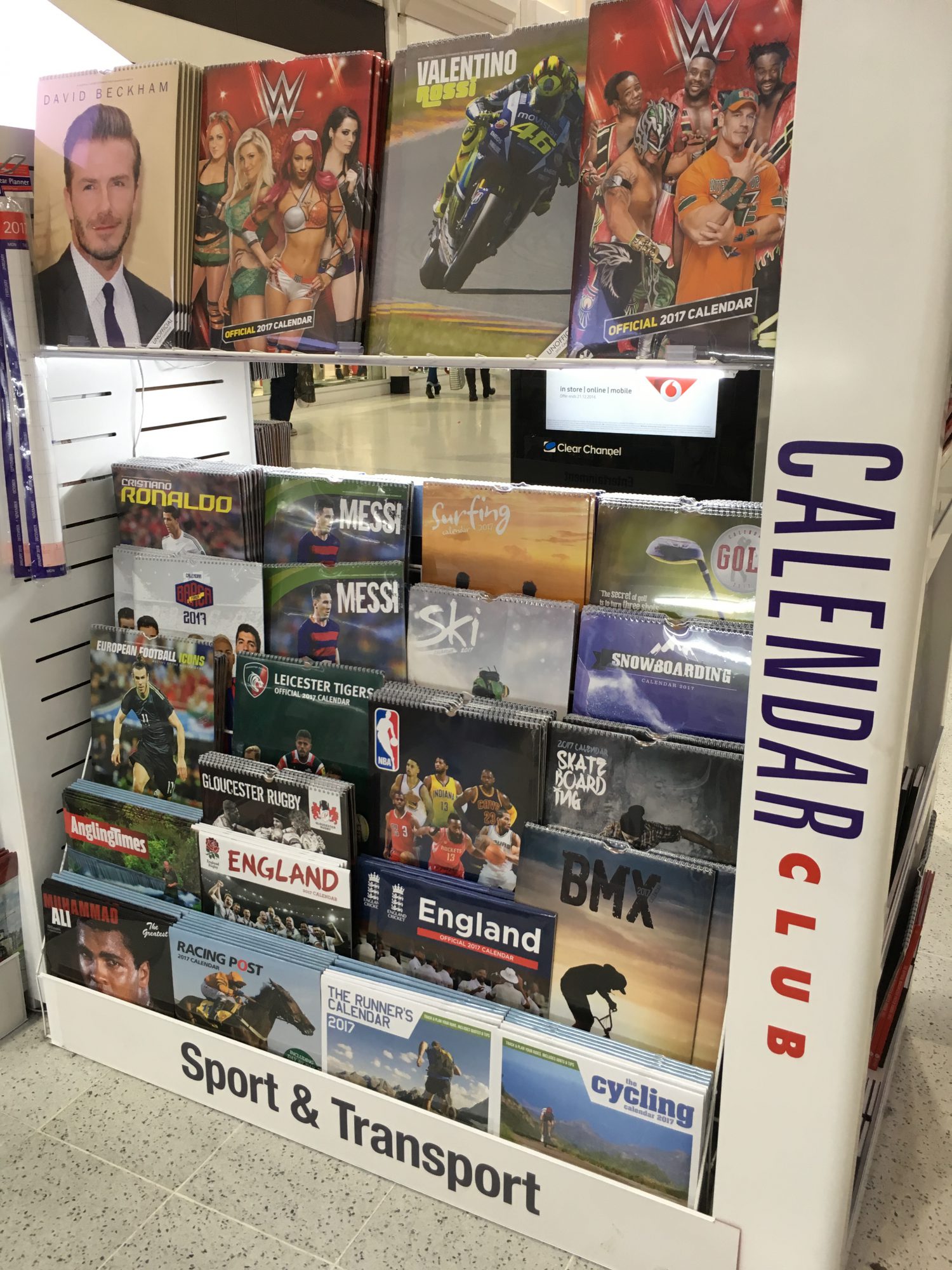 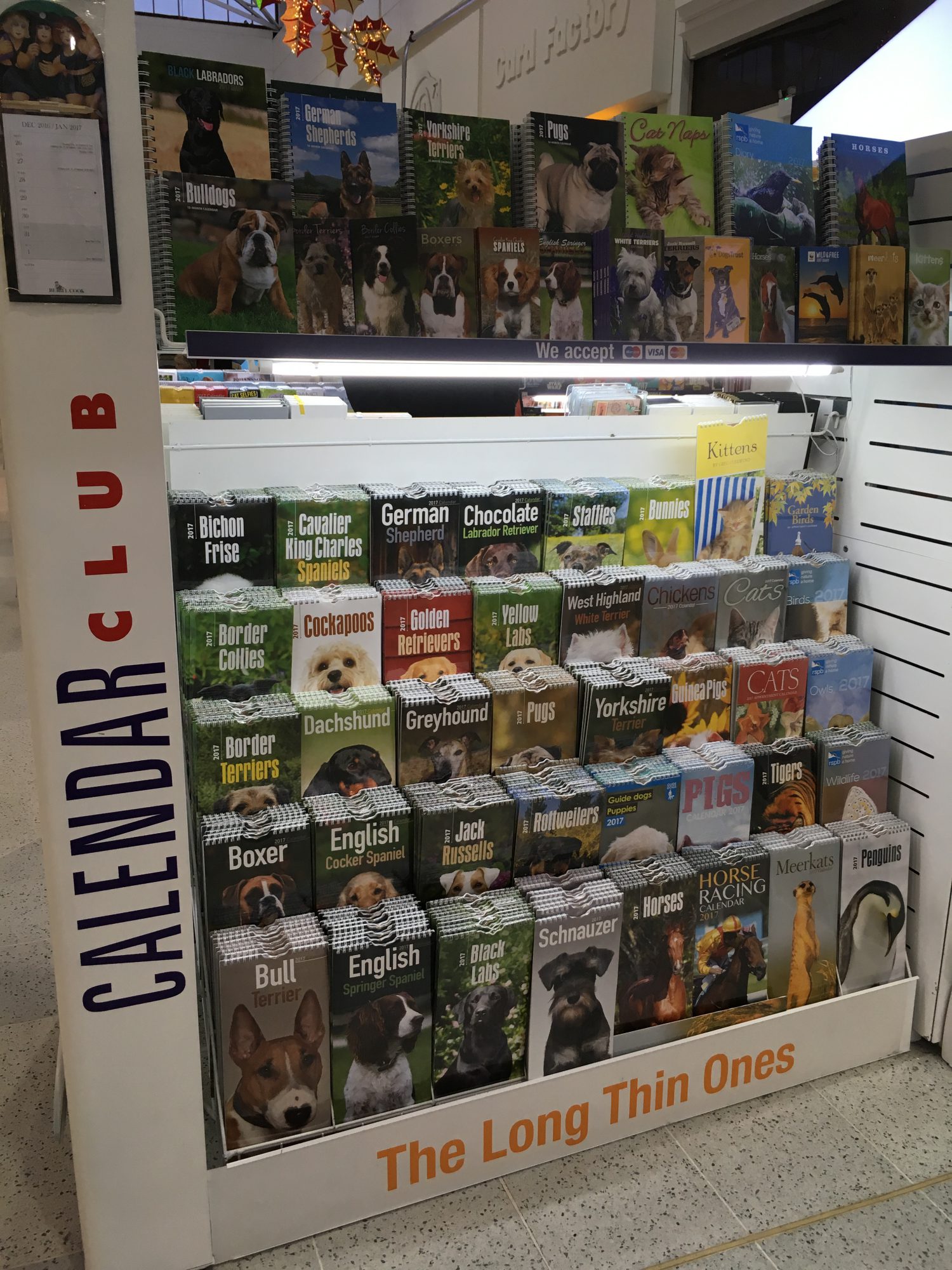 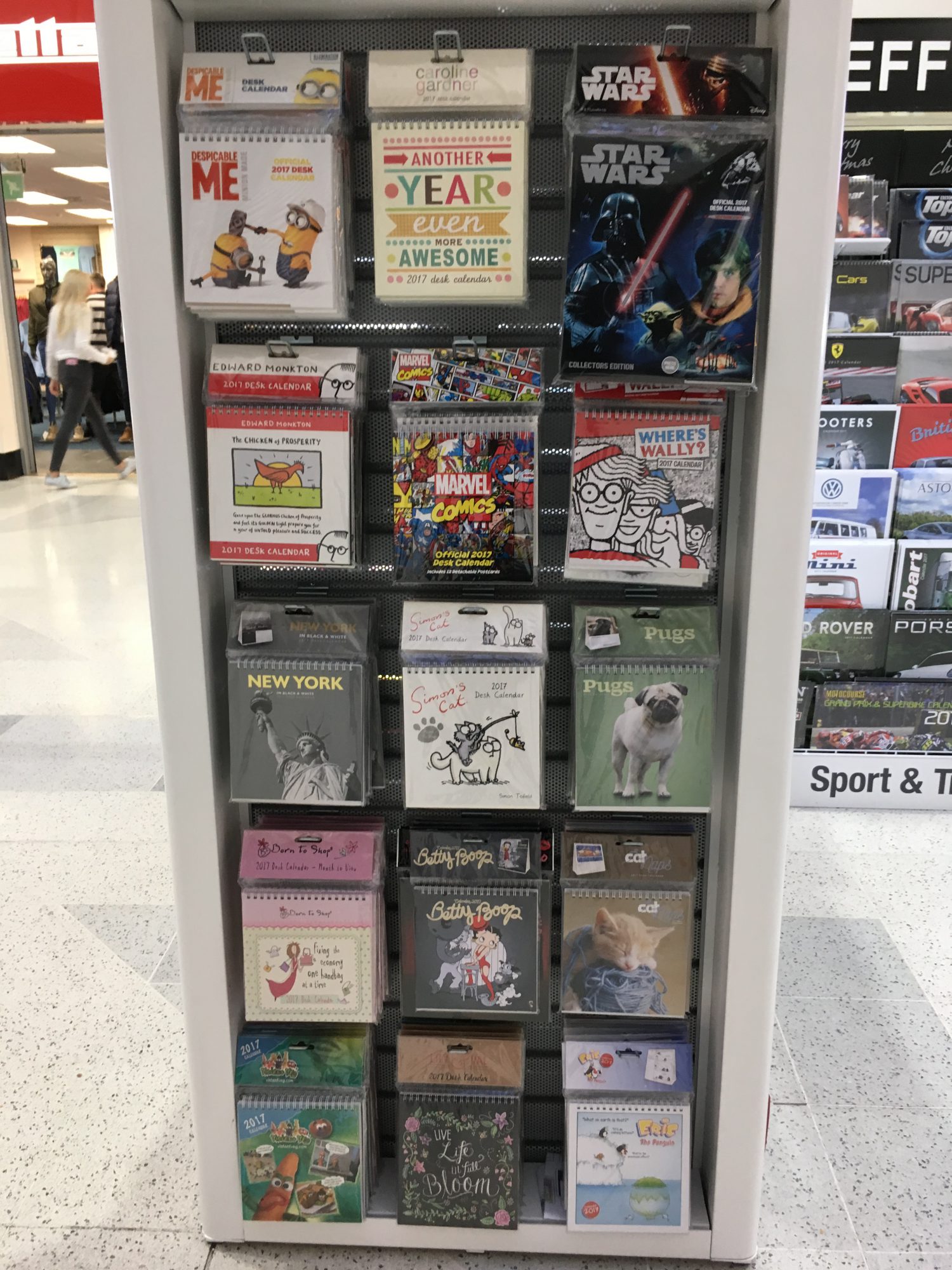 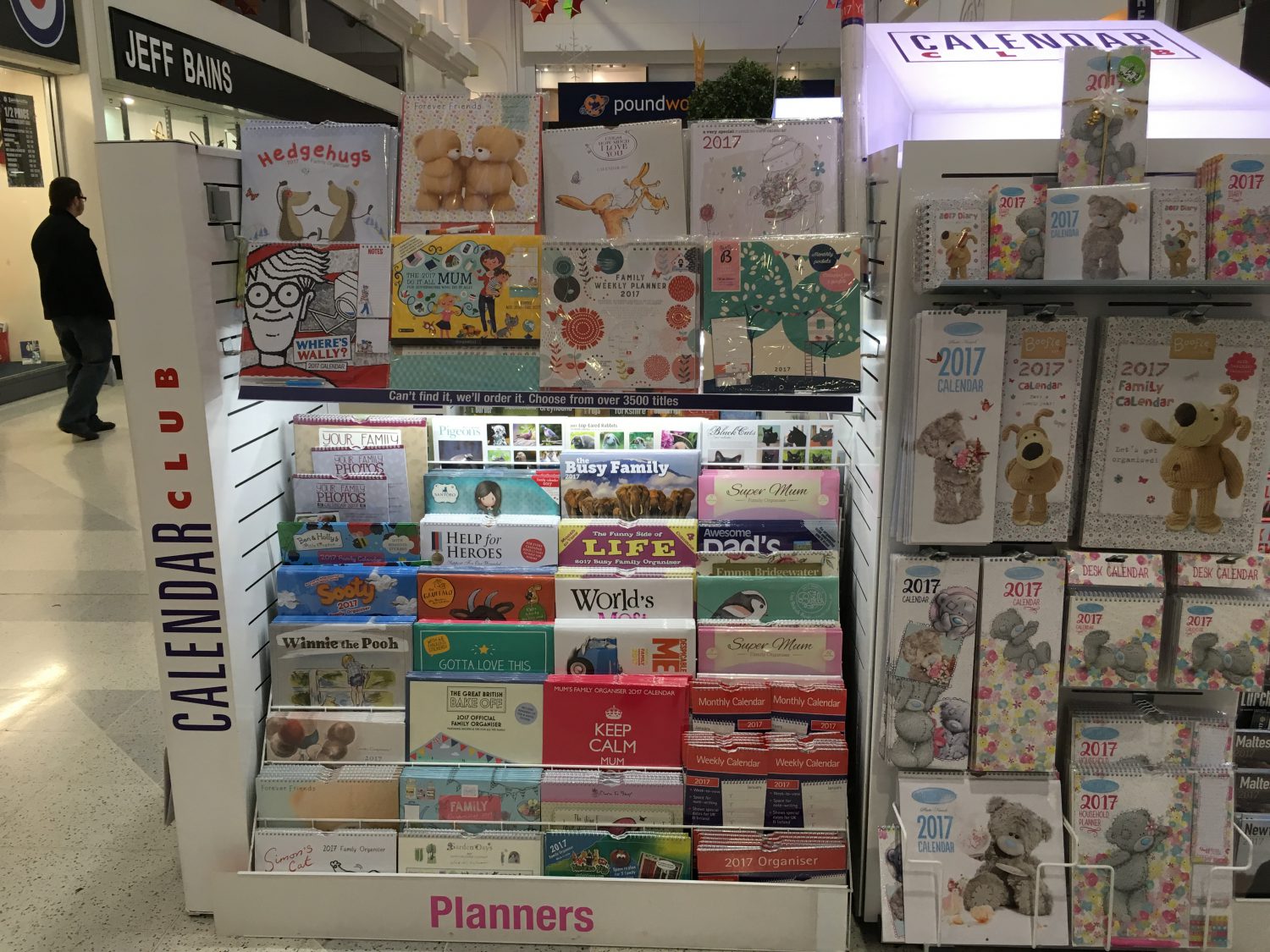 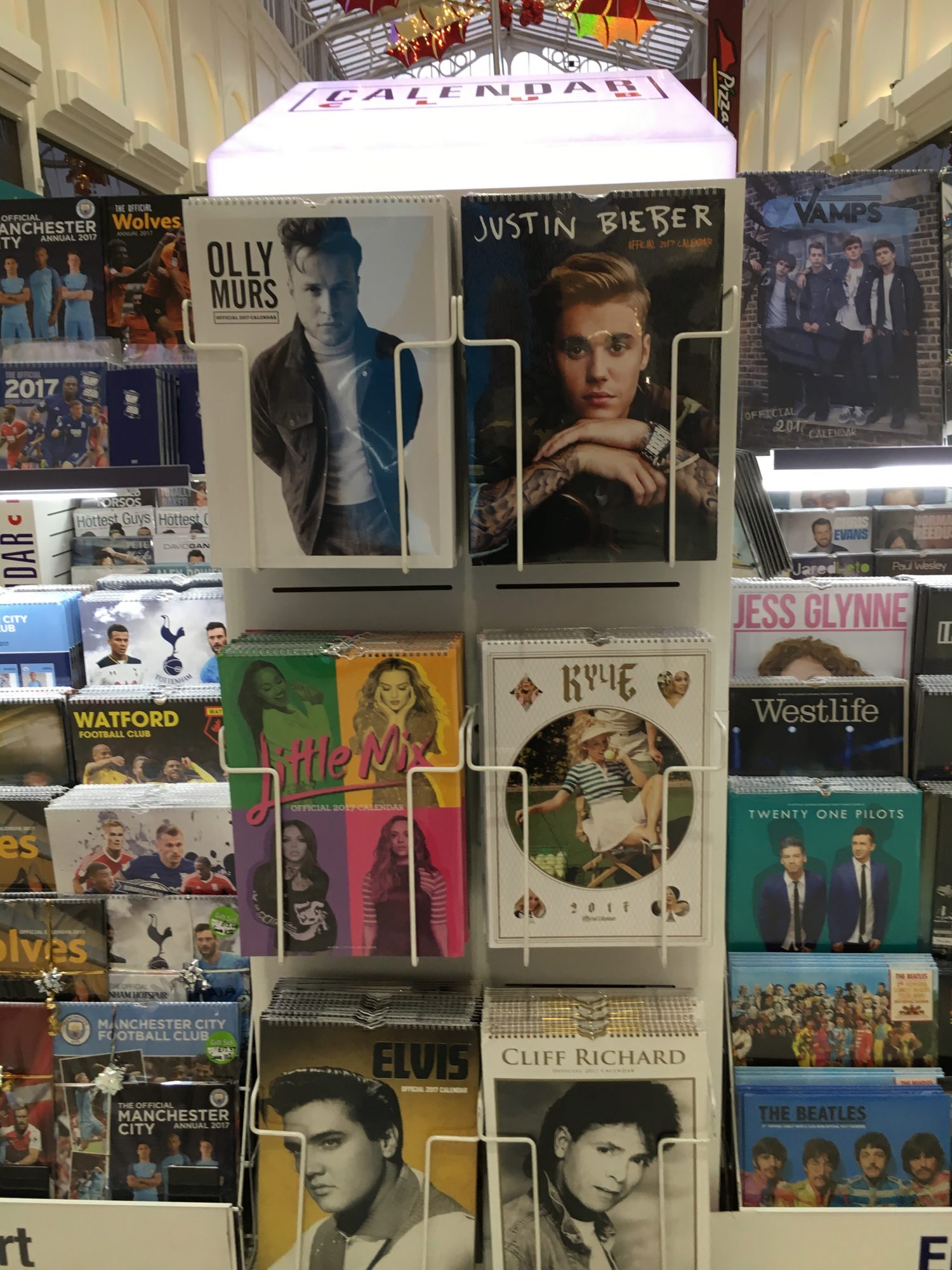 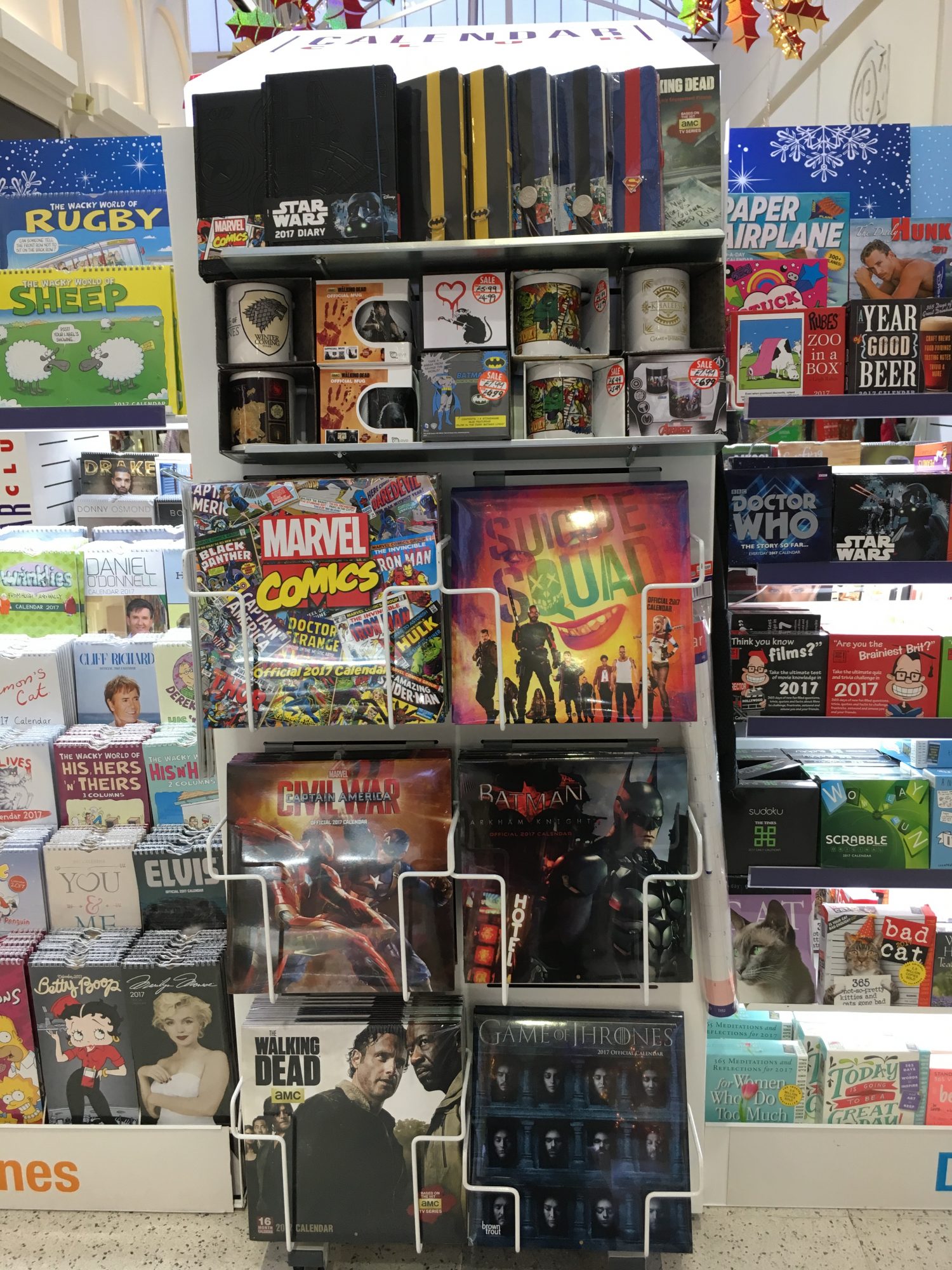 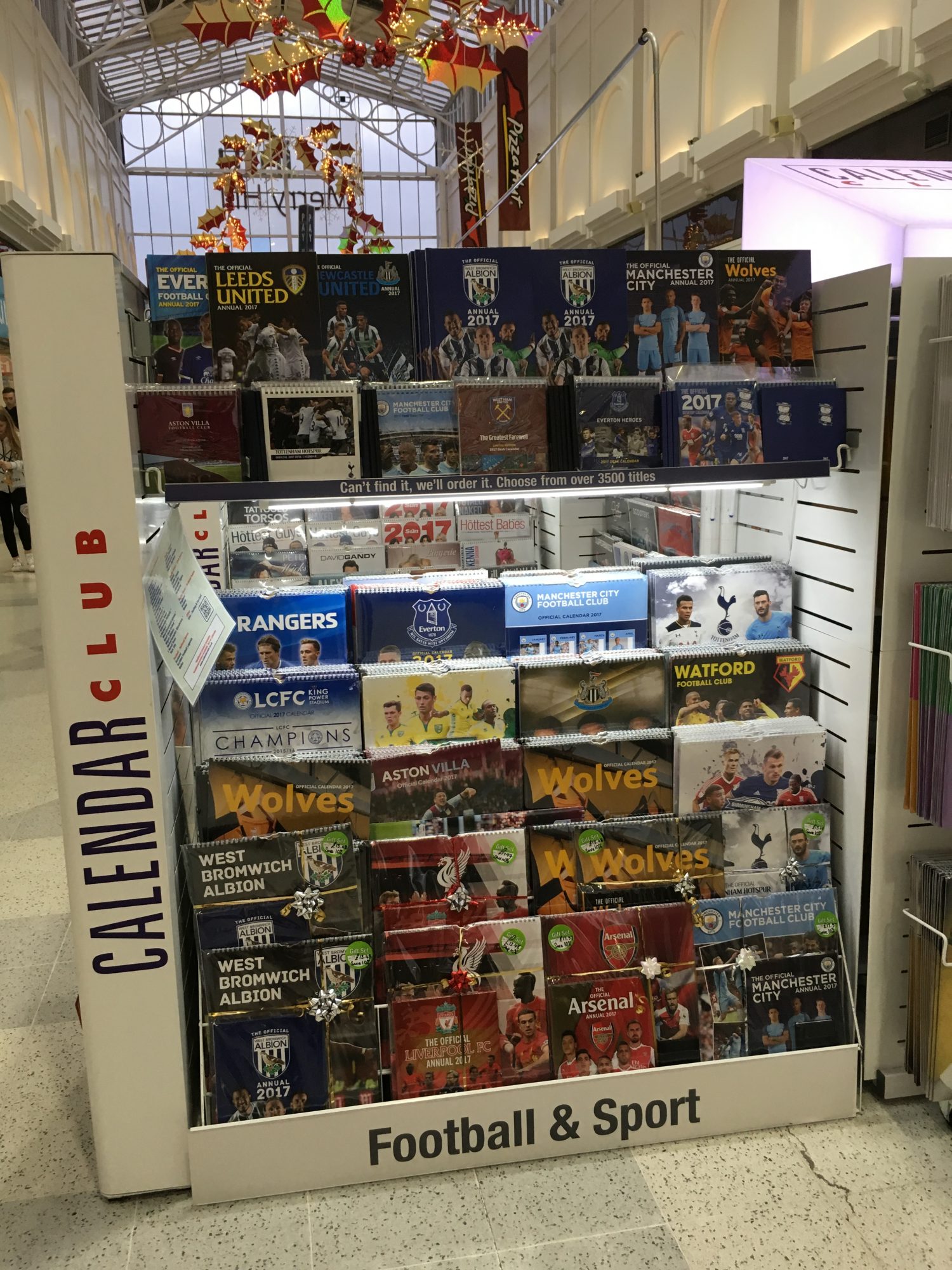 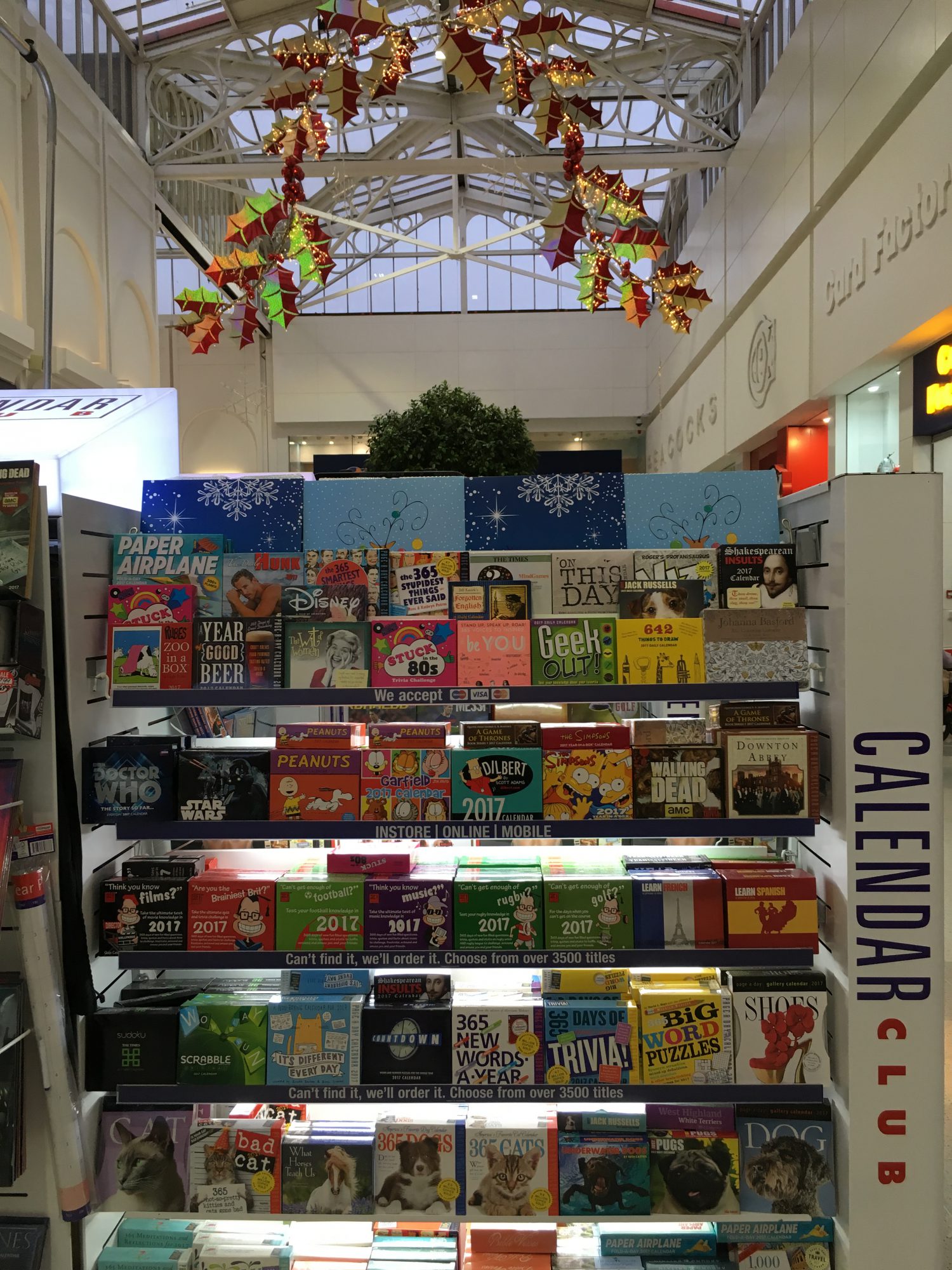 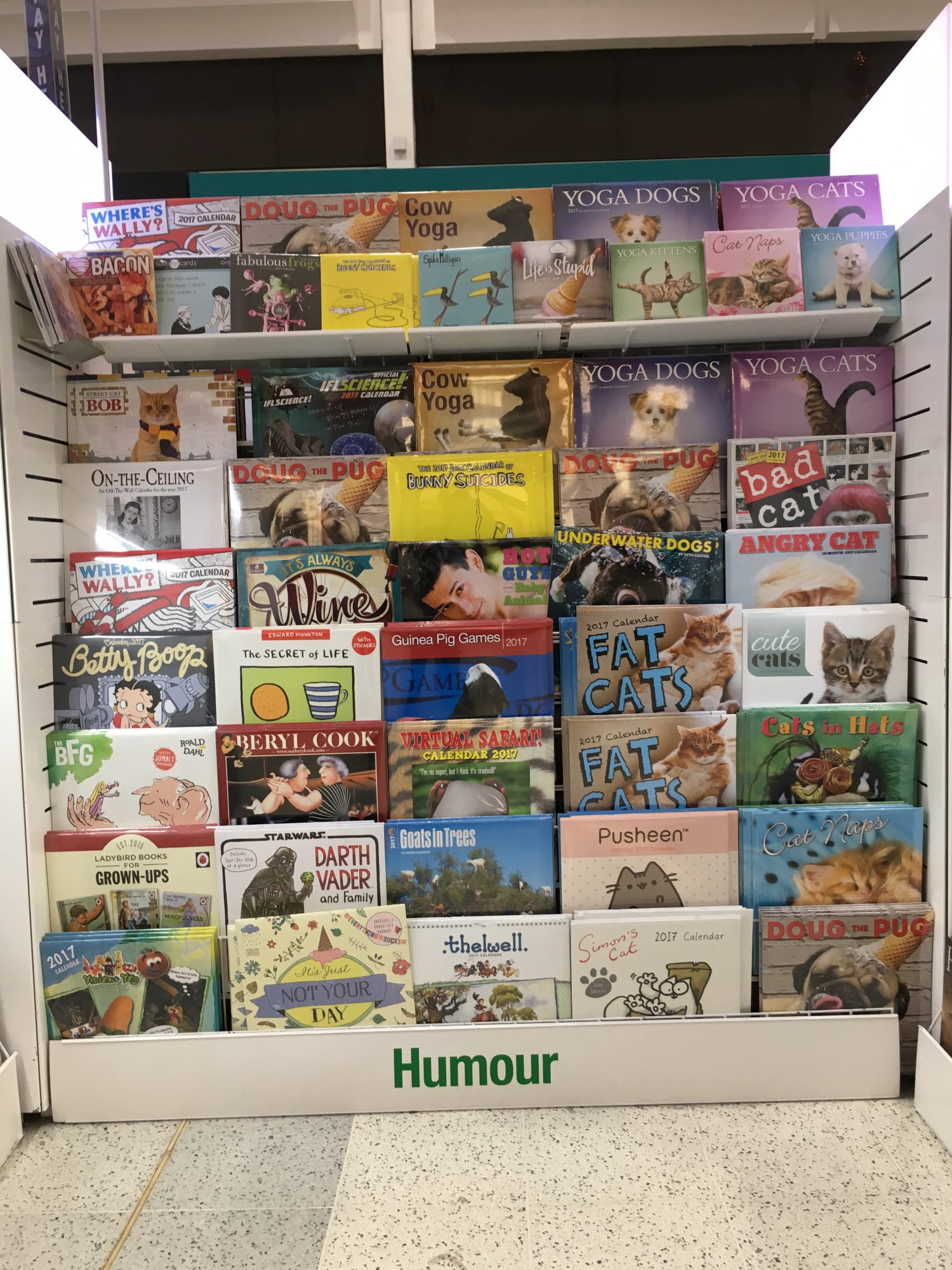 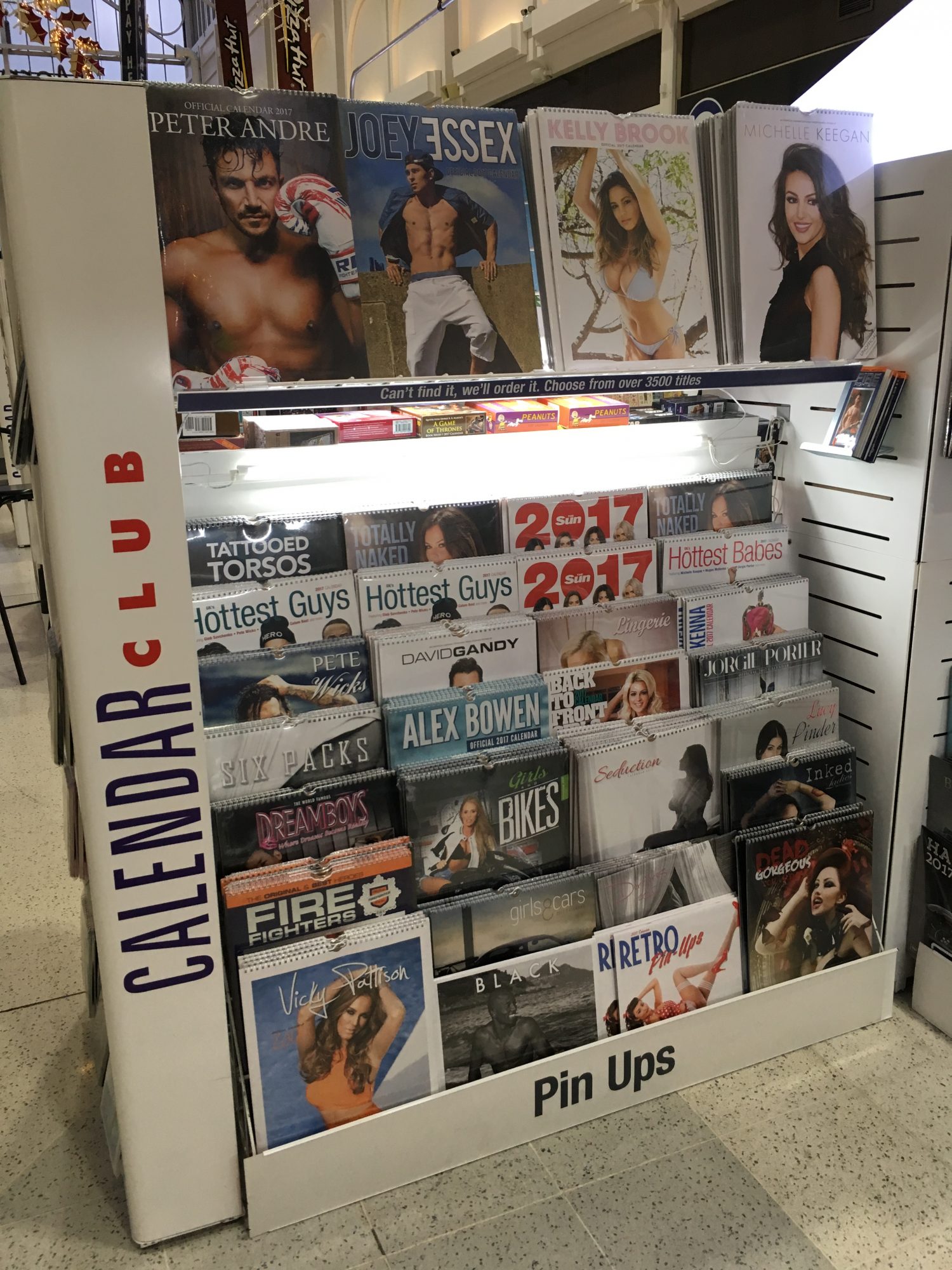 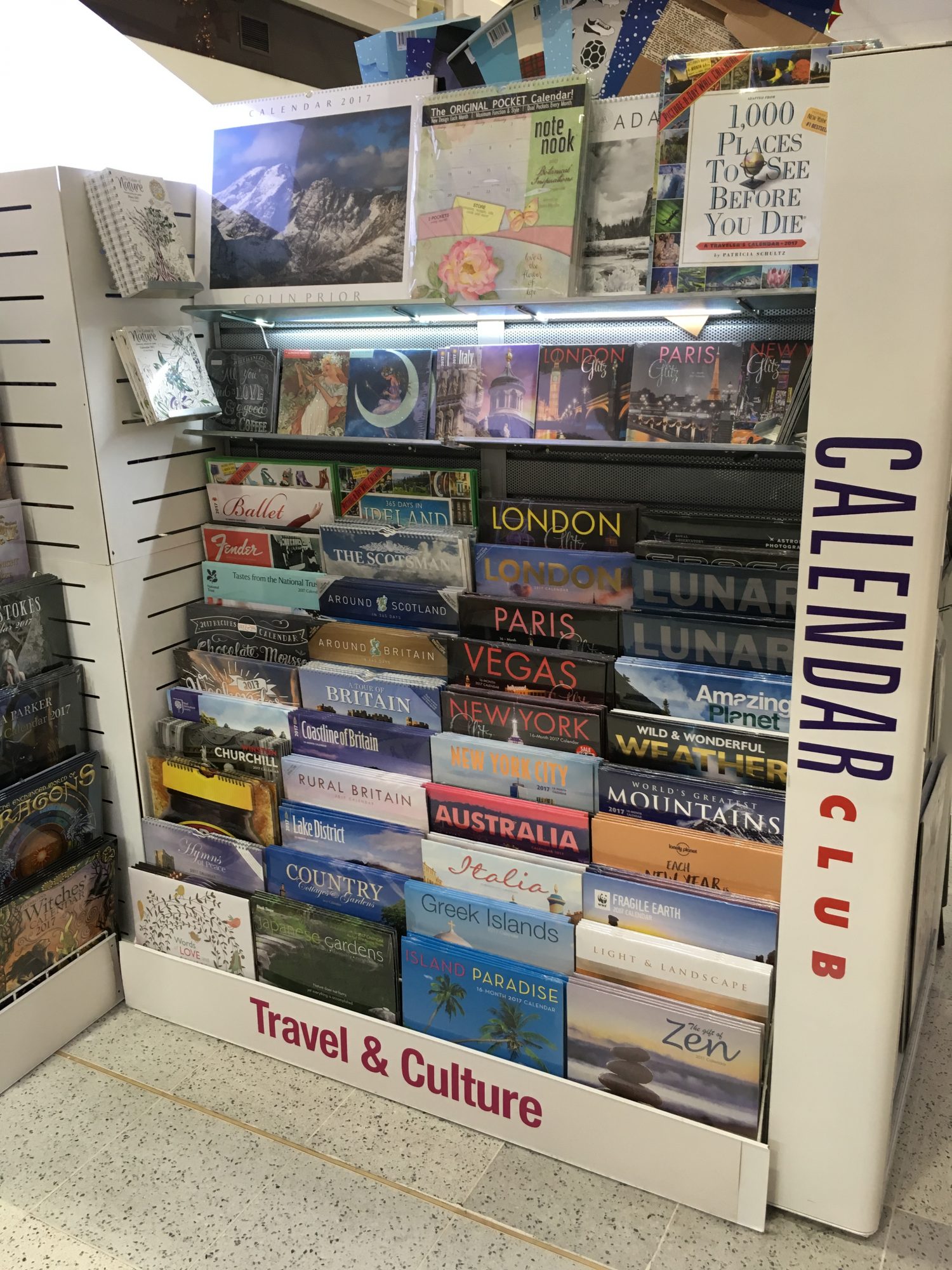 A frequently heard and frustrating question was “How much are your calendars?“. Peruse the range above. Realistically, it doesn’t take a genius to calculate the prices will mostly differ depending on the particular one …

I got asked if we had a Vladimir Putin calendar. I asked if he was serious. He stated he was. “You’ve got Cliff, why wouldn’t you have Vladimir?” So like a good operator I did a search on the Calendar Club website for the famous Russian man, just in case. “Sorry no, we don’t” I informed him politely.  He walked away and I’ve no doubt he’d done it for a bet and laughed as he left.

As I said, most of the celebrity calendars we had no clue as to who they were.  These calendars generally cost £8.99 or £9.99. Apart from a guy called Pete Wicks whose calendar cost an astonishing £13.99!! We’d never heard of him, but were reliably informed he was off one of the reality tv shows.

Well one day Sandra Willis was at the till, and she heard shrieking and hysterical laughter coming from one of the bays – yep, you guessed correctly, the one with Pete Wicks in.

Not long after, two ‘older’ ladies wheeled round their shopping trolleys with a Pete Wicks calendar proudly displayed on top. That picture was hilarious enough, but when they came to pay they assured her he was worth every penny. They both trundled off with their purchases, and as the second one was leaving, she turned round and winked at Sandra stating “I’m even going to put a clean bra on for him tonight!”

There’s a wide section of organisers and family planner calendars. Sandra sent a gentlemen round to the ‘family planning’ section – she only did this once. As soon as the words were out of her mouth she realised with amusement and embarrassment what she’d said.

As well as knowing nothing about celebrities, Sandra was also rather vague about football. So when asked if she had a ‘blues’ calendar,  enquired were they a band – which had the customer in hysterics.

On another occasion, and not wanting to be outdone, someone asked her for a name she hadn’t heard of, to which she thought she’d look really intelligent and said “Oh! Is that a footballer?” Only to be told “No!” It was an artist!

Sandra also had a couple of rather special ‘pay it forward’ incidents.

Nearby she noticed a young man’s carrier bag full of shopping broke, so she gave him one of the Calendar Club’s  super sturdy ones. He appeared to be rather embarrassed by this, quietly said “Thank you“, then dashed swiftly off. About 20 mins later he re-appeared with a cup of hot chocolate for Sandra.

Another time she’d forgotten to bring a drink of water. It was a very busy morning with a queue of people waiting to buy their calendars, and the Greggs cafe opposite had a long line out of their door. Sandra ran to the back of the Greggs queue and asked a young lady there if she’d buy her a bottle of water, and gave her the money. She was serving when the young woman put the bottle by the till, but thanked her profusely without really looking. It was only as the queue died down and she went to get the water, that she noticed she’d returned her money along with a gift of a mince-pie in a little bag with ‘Merry Xmas’ written on it.

Sometimes it’s the little things in life that mean the most.

There were 277 Calendar Club stores around the United Kingdom in the 2016/17 trading period. Each of these stores operate as a ‘franchise’, and the operator earns a percentage of the overall takings for the time they’re responsible. They can also recruit and employ their own ‘staff’ and are encouraged to do so.

The timing of the store openings is perfect for floating traders to take advantage of once the festival season is over, so long as they can find a suitable place near a canal, somewhere to moor, and transport to get to and from their store.

If you’re interested and want to know more, go to the recruiting page on the website and fill out an application! 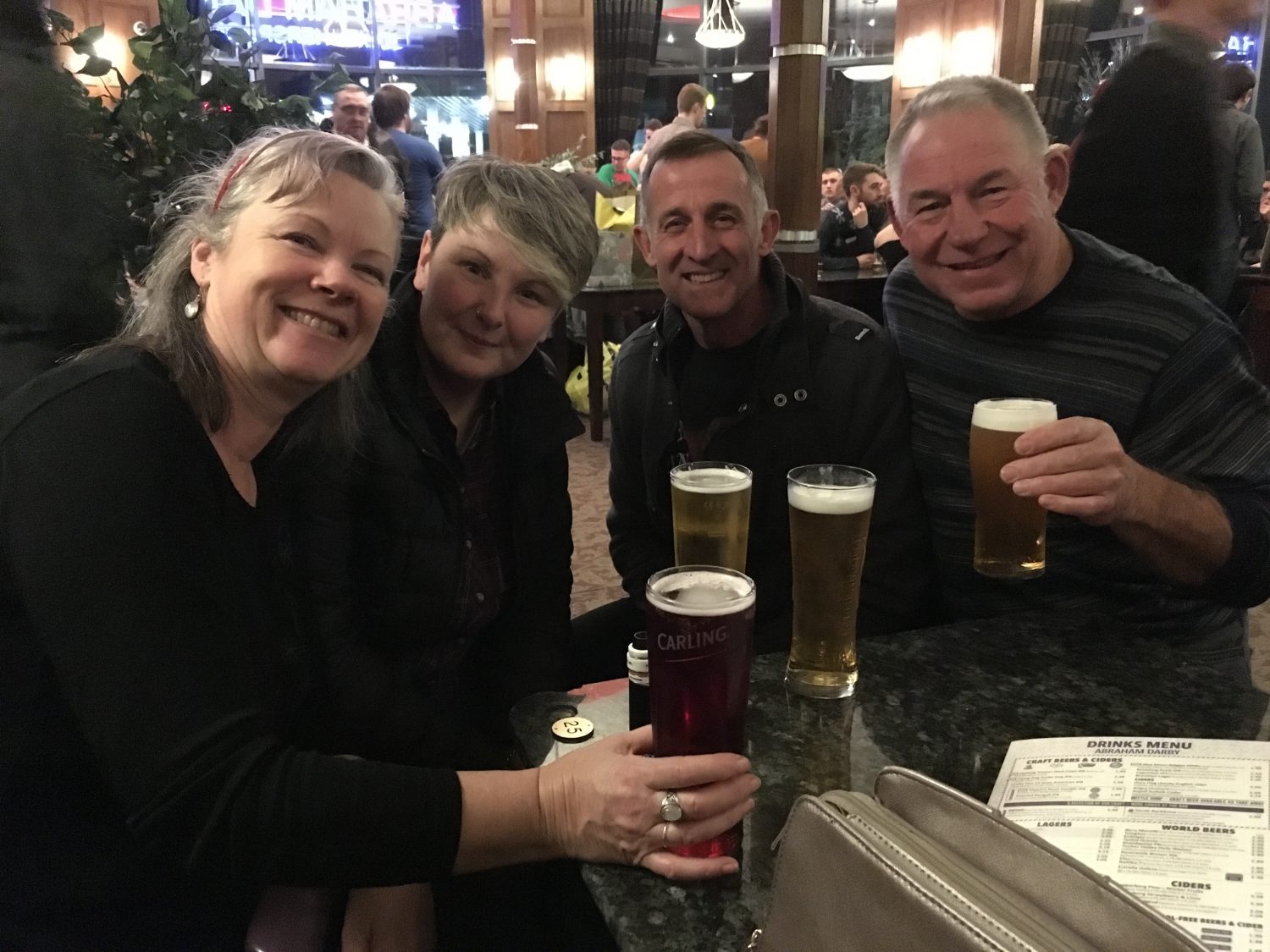 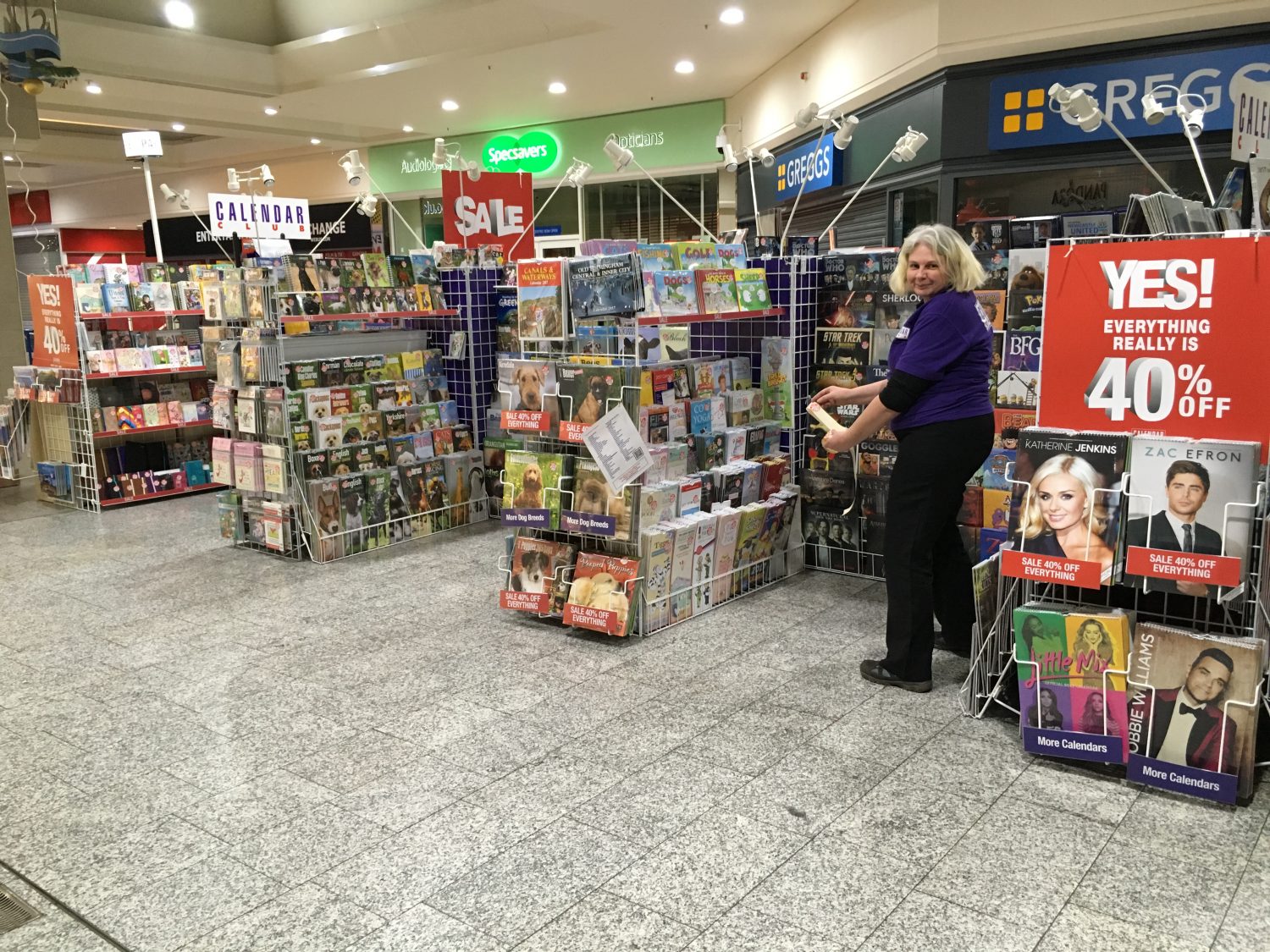 This year, if all goes to plan, we’ll have our own Calendar Club store or Mall Unit from October through to the New Year.

How exciting! Actually ‘working’ together, in the same place, doing the same thing. I think that’s a first for us …