It’s been a crazy year so far. Travelling to Nigeria, Northmoor and New Zealand in the space of three months has been incredible.

It does now mean we’re a quarter of the way through already – time flies when you’re having fun!

I recently spoke to a couple of people in their 70s, who are still gainfully employed. One of them full-time. They revealed to me that not working wasn’t really an option for them. They couldn’t comprehend what on earth they’d ‘do’ with their time in the space that would be open to them.

I’m thankful that’s not a problem I/we have.

However, having been so reckless and impulsive as to stop ‘working’ in the usual way prematurely, we’re also very aware of the need to settle down a tad for the next nine months and bring in some much-needed income to support our flexible floating lifestyle.

Of course ‘settling down’ isn’t quite that – travelling is our constant companion and that’s how we love it.

A pictorial journey from London to New Zealand to Gloucester 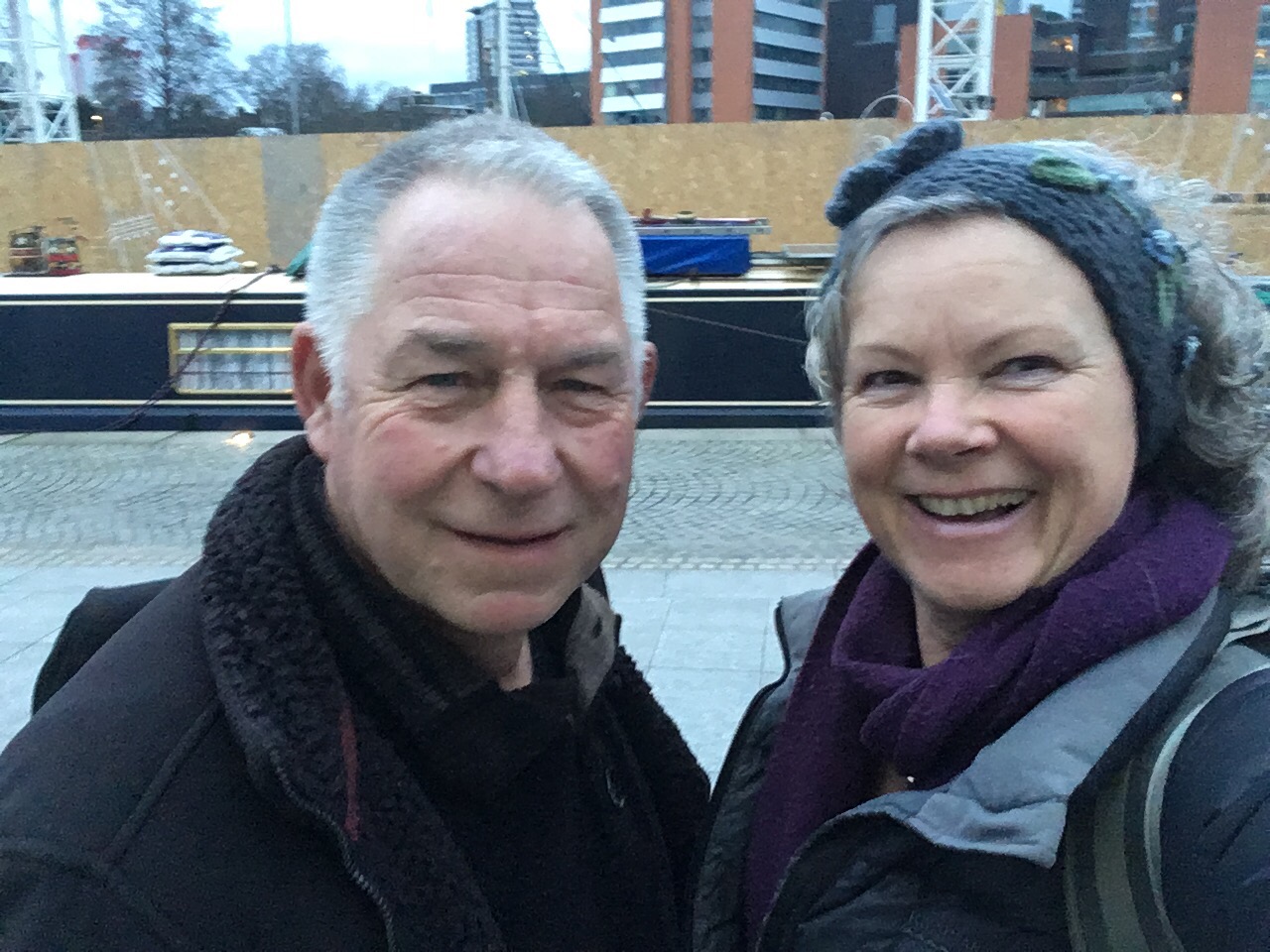 Starting our trip to New Zealand at Paddington Basin! Barry can alms always find a canal 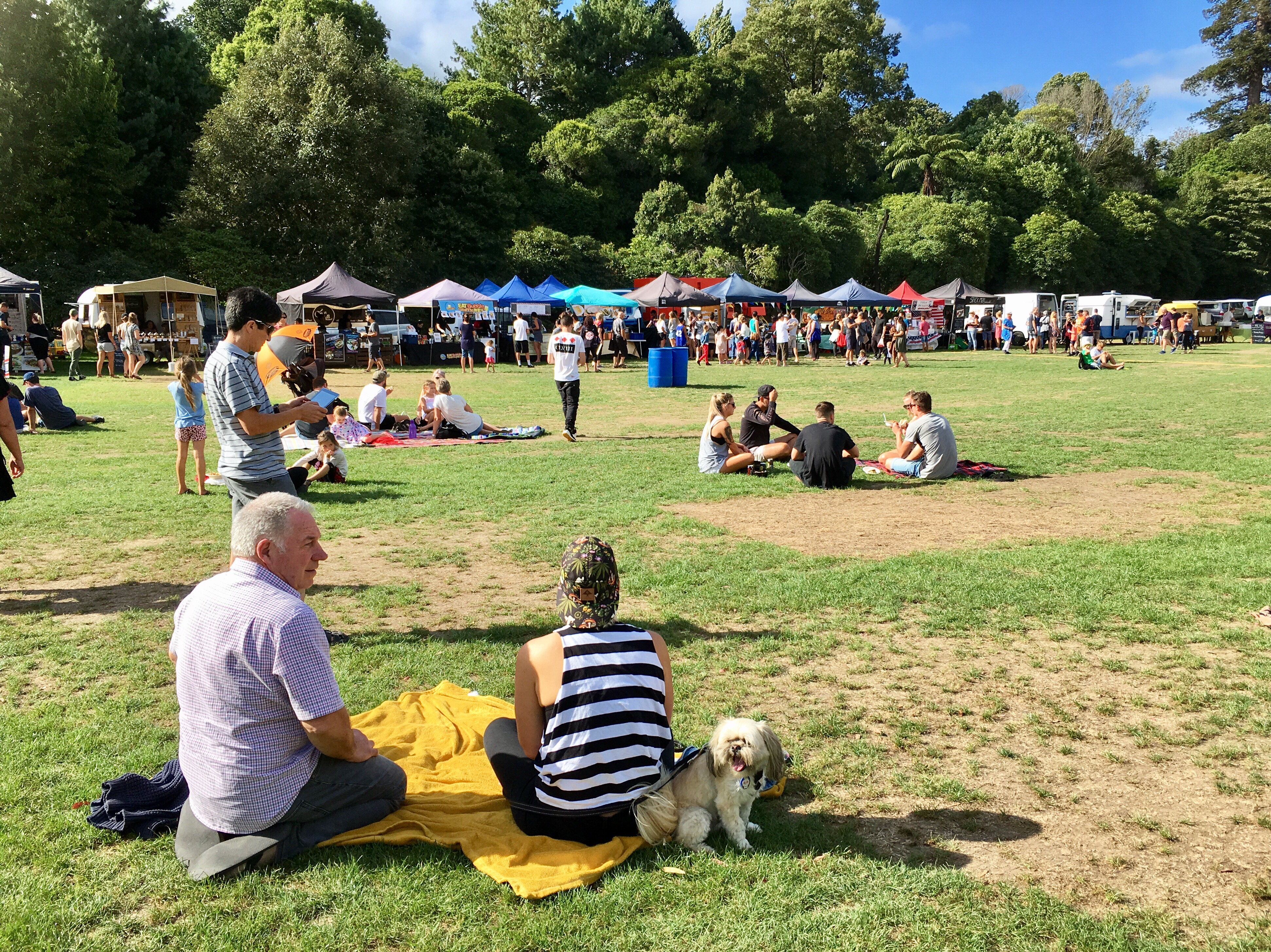 From Auckland to Tauranga, then to Hamilton to stay with Jamie, Barry’s daughter 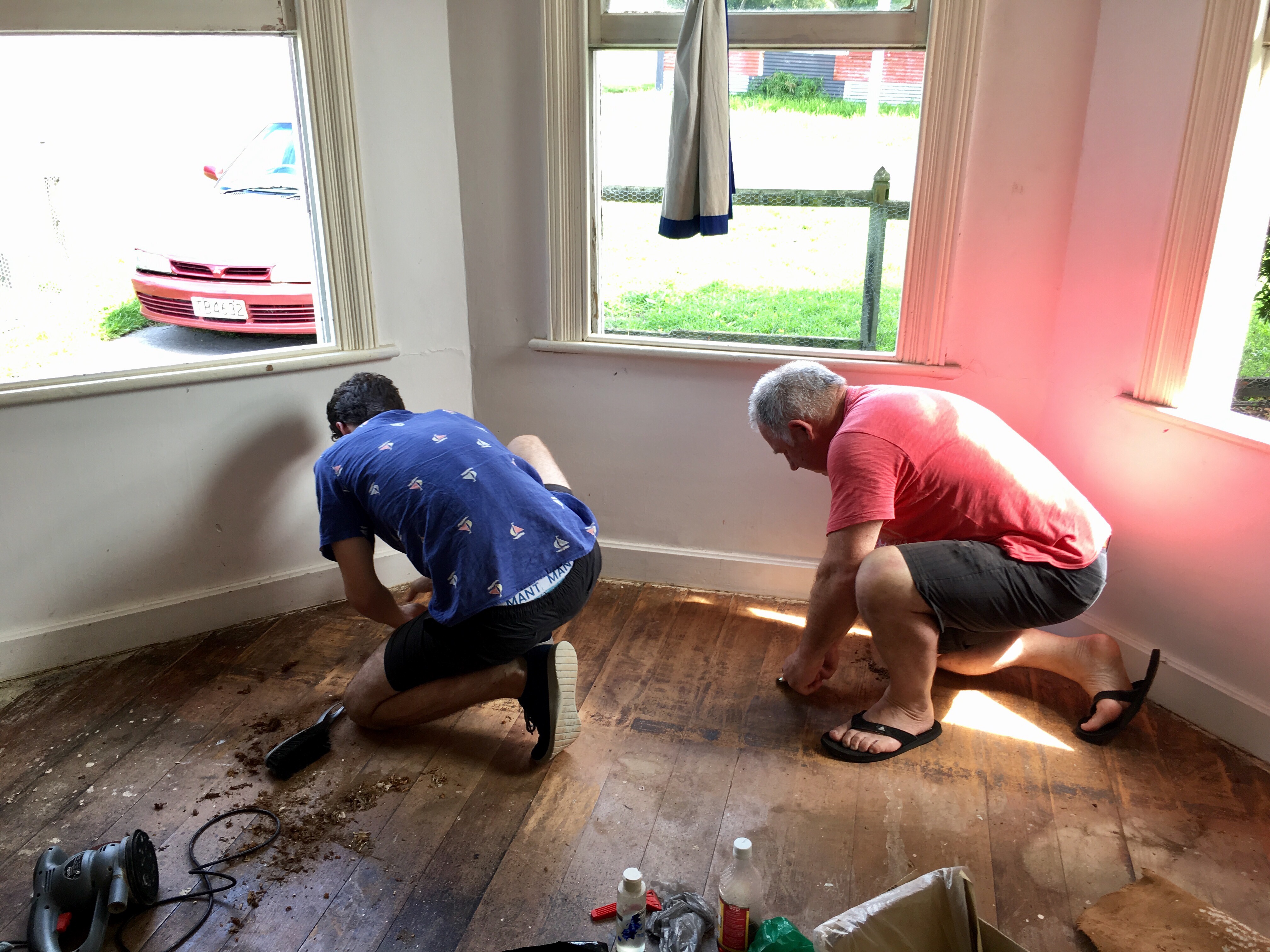 Then to Gisborne – and Barry has fun helping his son Tom, who had recently bought his first house with his partner 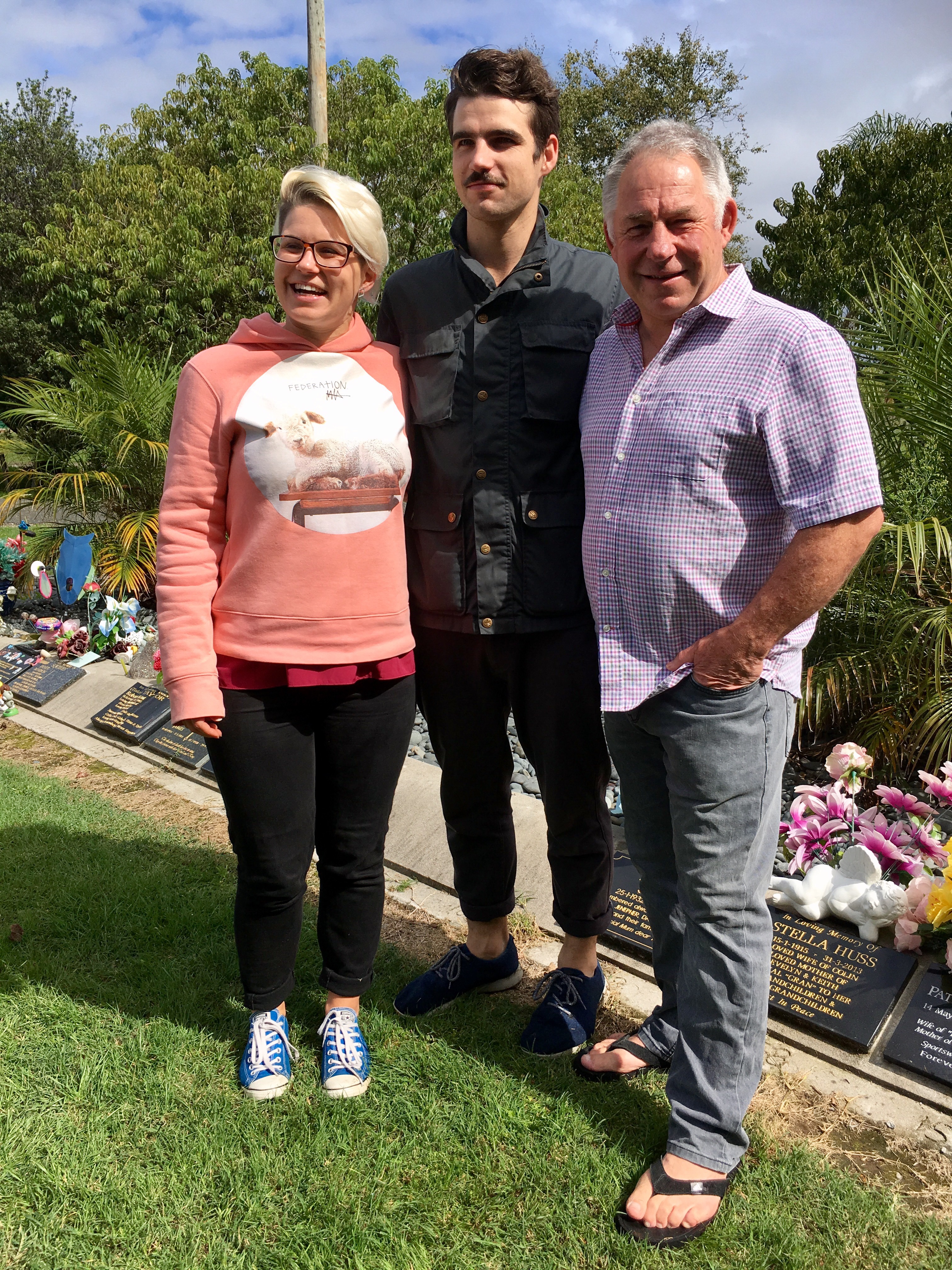 While were back, and Barry’s siblings too, the opportunity arose to place a headstone on their mum June’s plot at the cemetery. A great chance to snap a gorgeous shot of Barry and his children Jamie and Tom 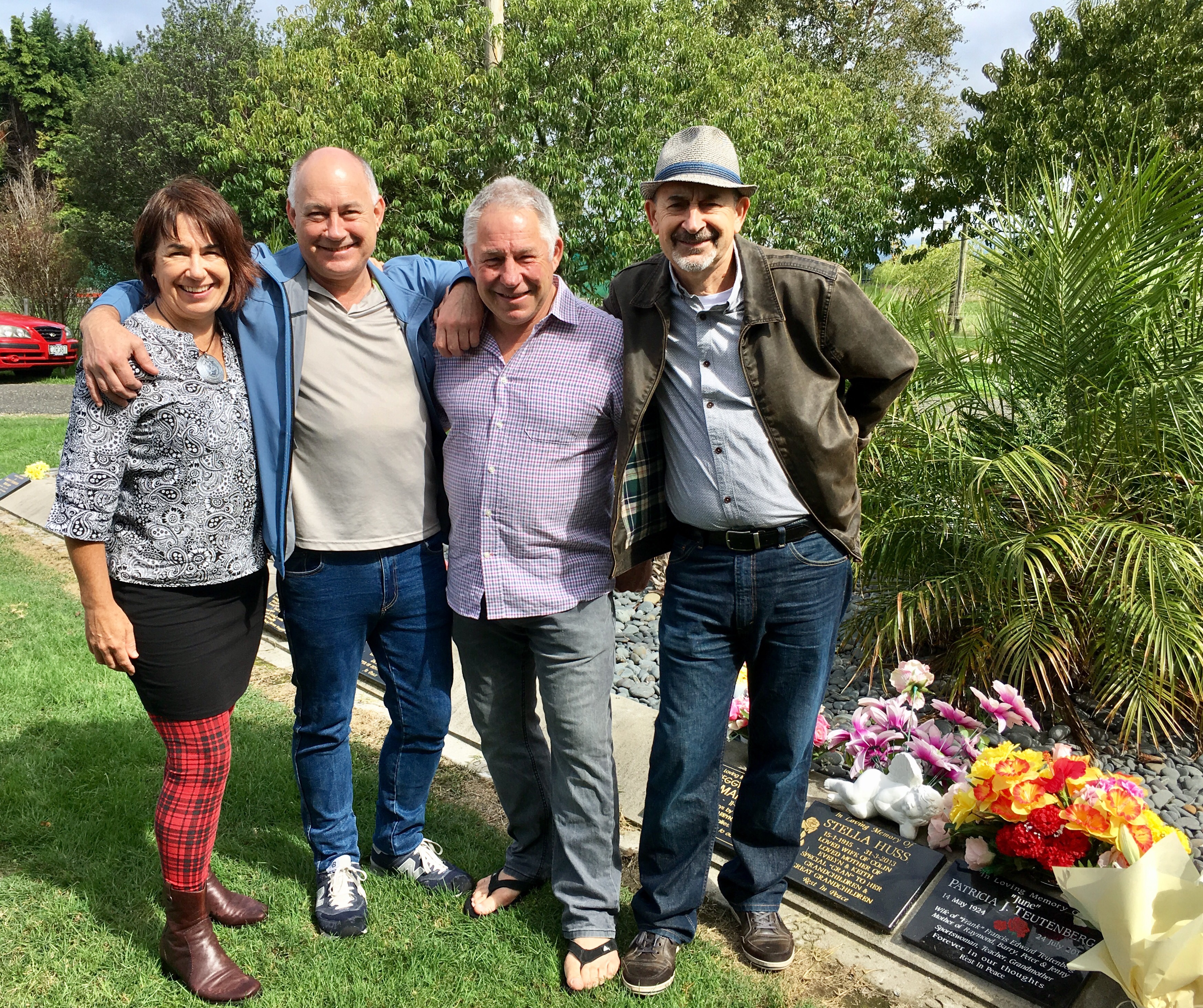 Jenny, Peter, Barry and Ray – reverse age order! June’s plot is in the bottom right of the picture 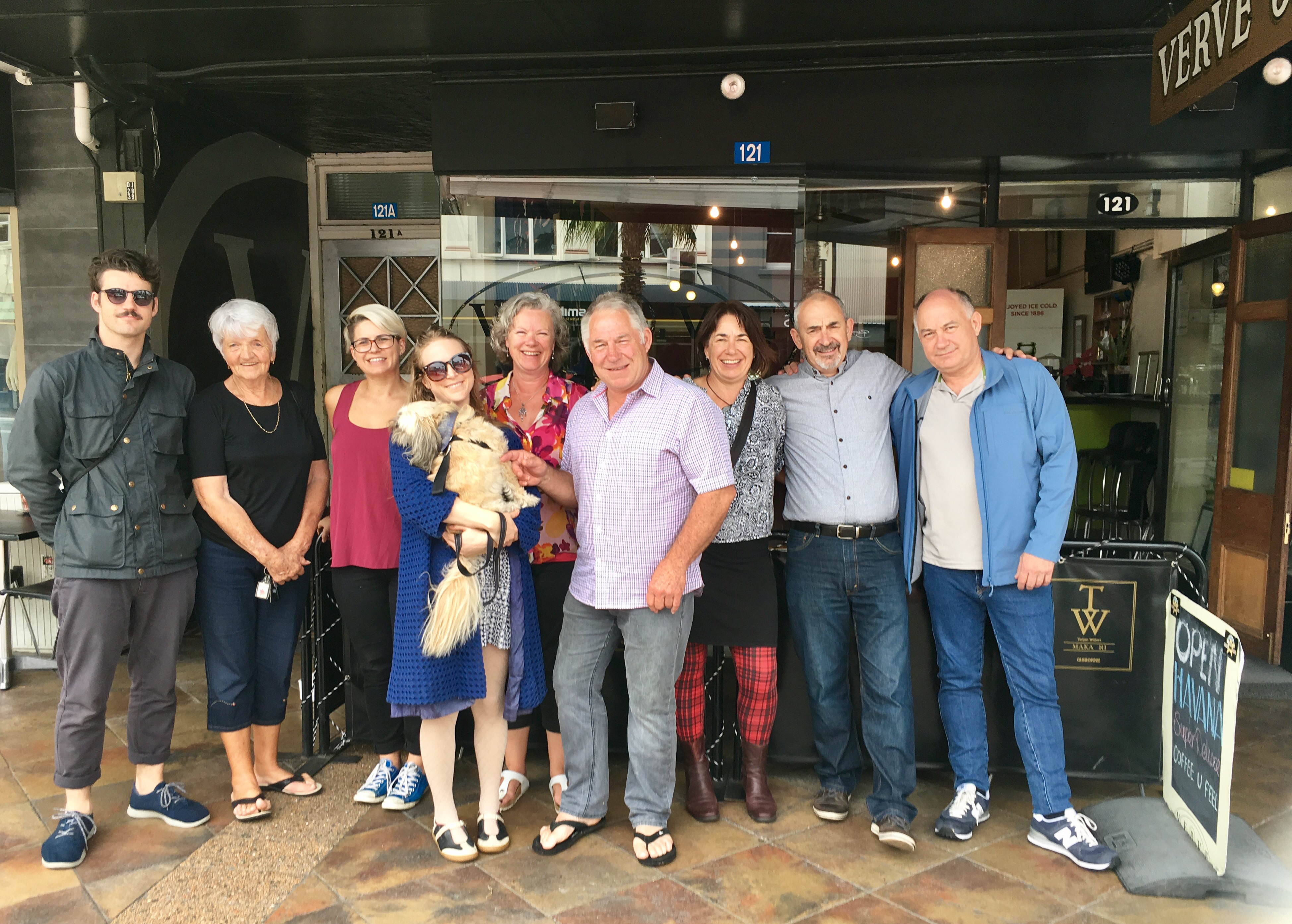 After the ceremony, a family gathering at Verve Cafe in Gisborne 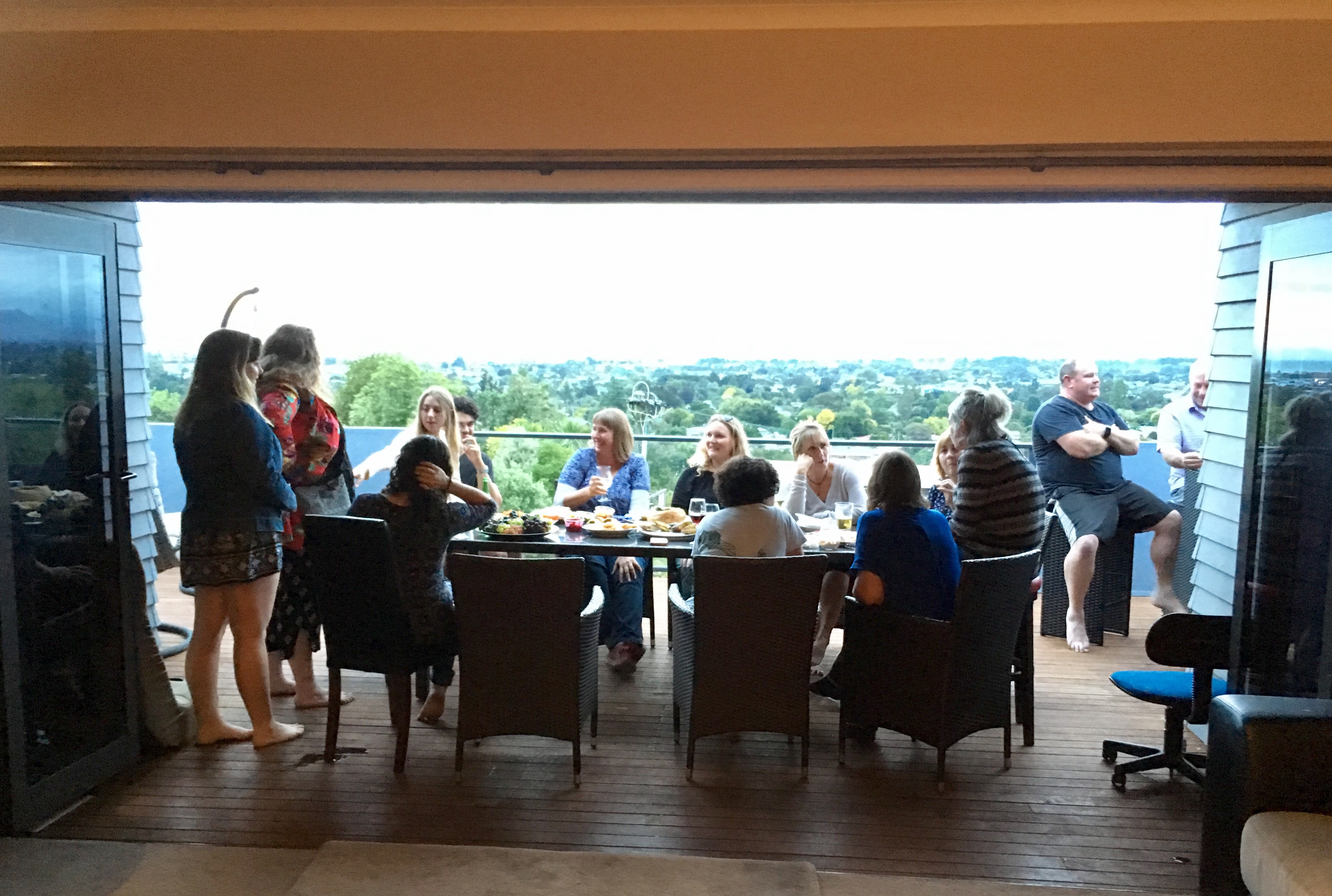 I caught up with heaps of my previous midwifery colleagues too (only a few of them featured here!) – look at this for a house with a view! 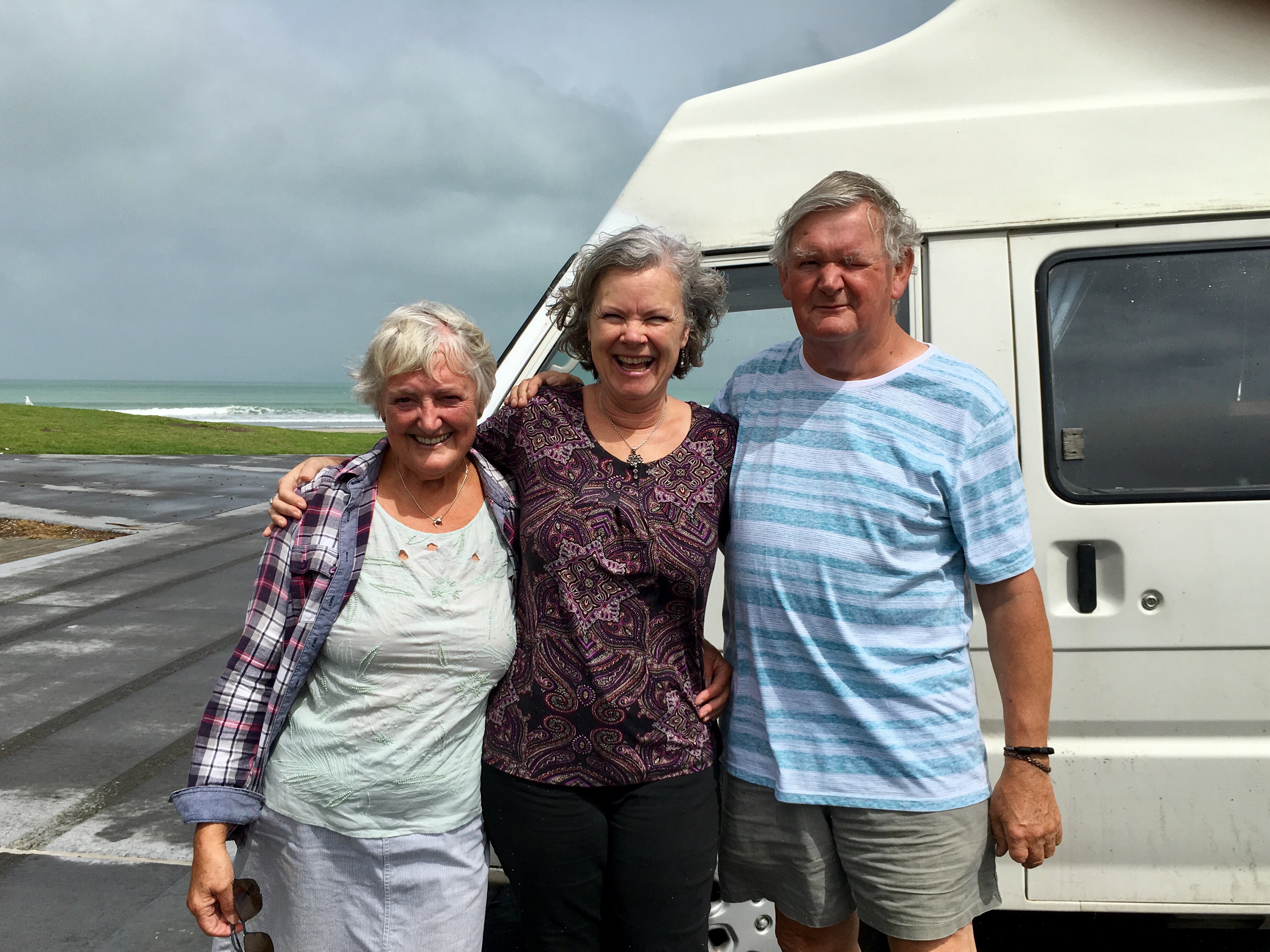 We even met up with some fellow narrow boating traders who’d been in New Zealand since October 2016. Heather and Tony run ‘The Fudge Boat’ 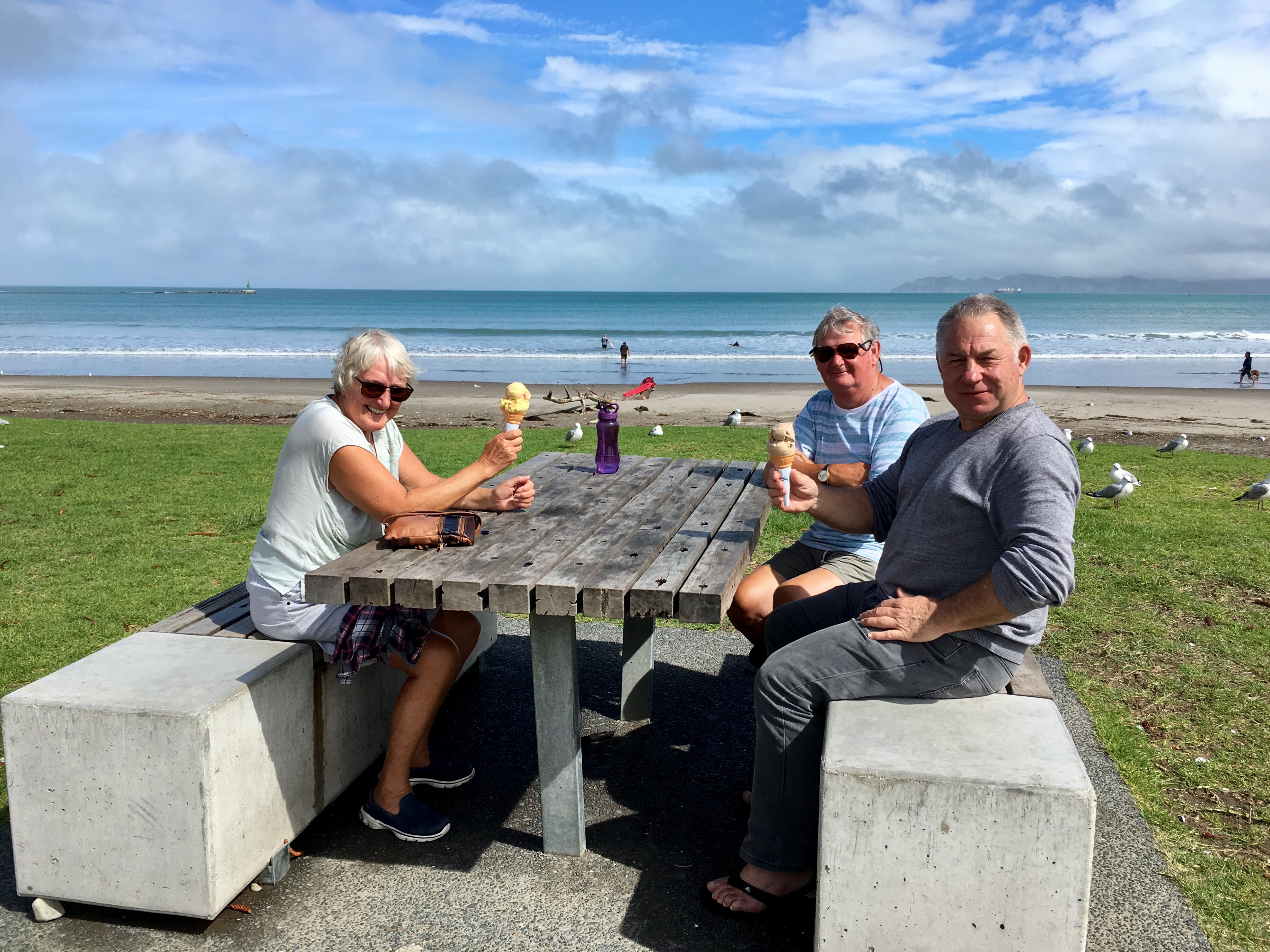 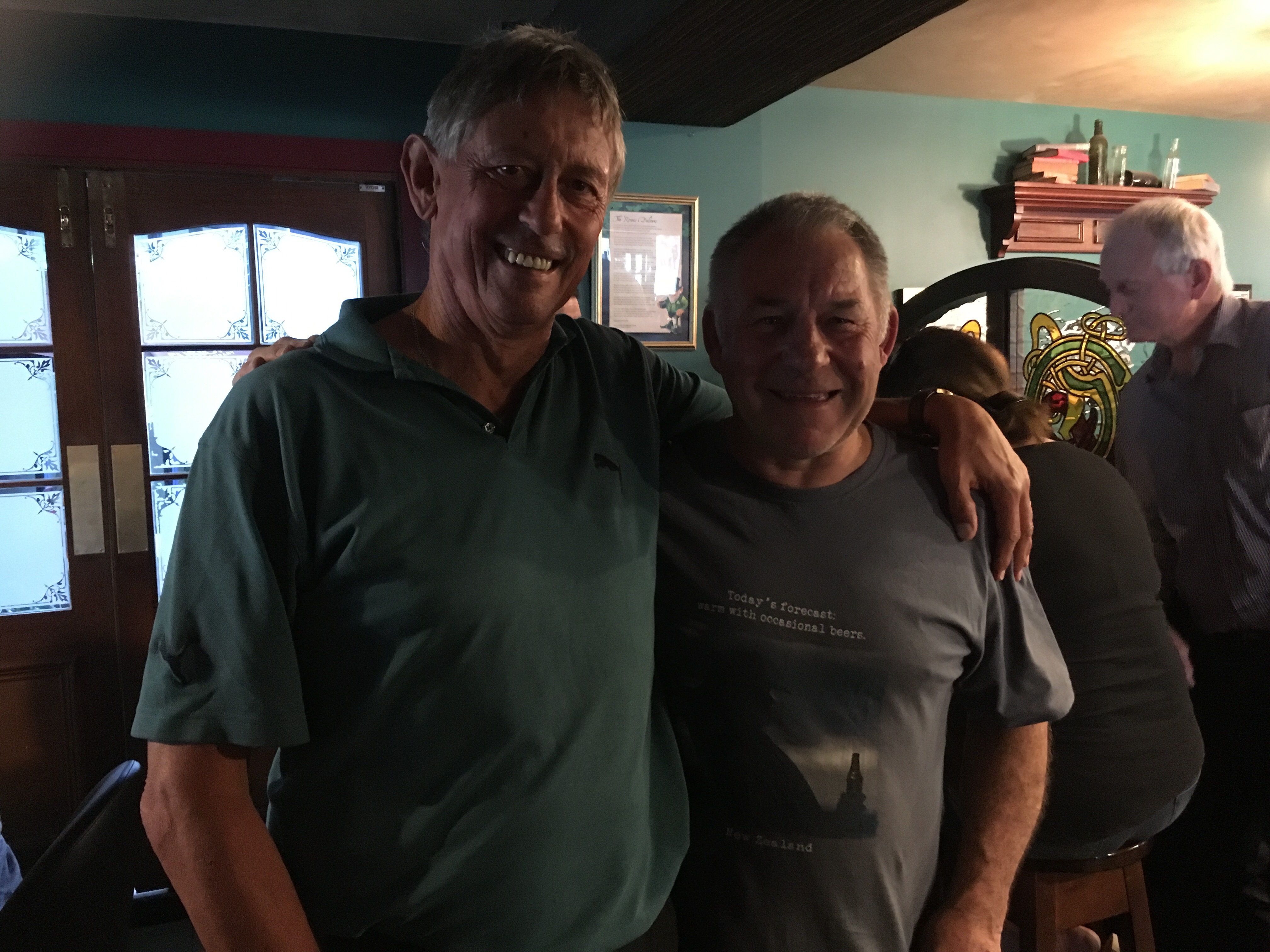 We went to The Rivers’ Tuesday quiz night a couple of times too – and caught up with a blog reader, Phil, who you’ll be seeing more of in July if all goes to plan … 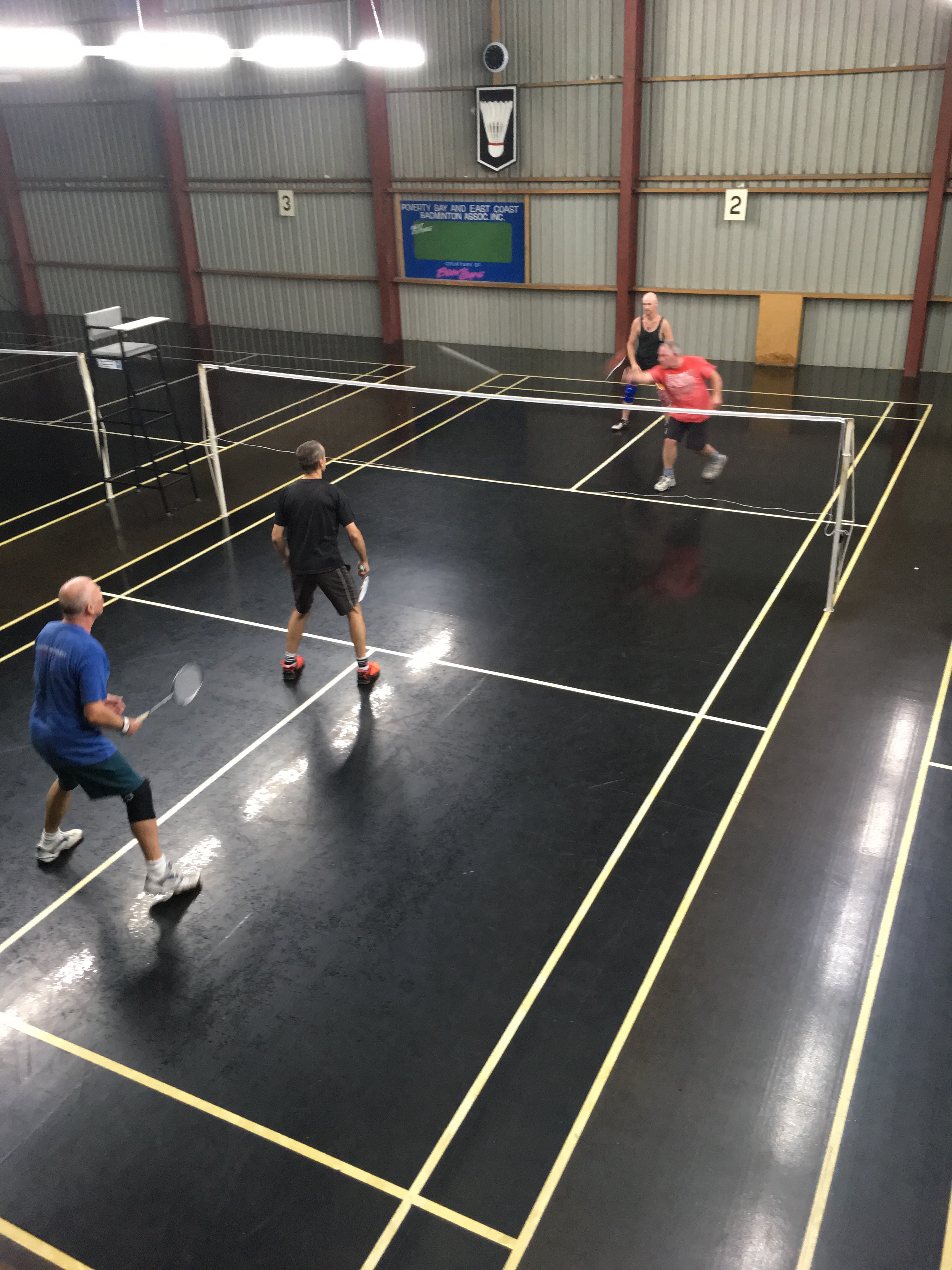 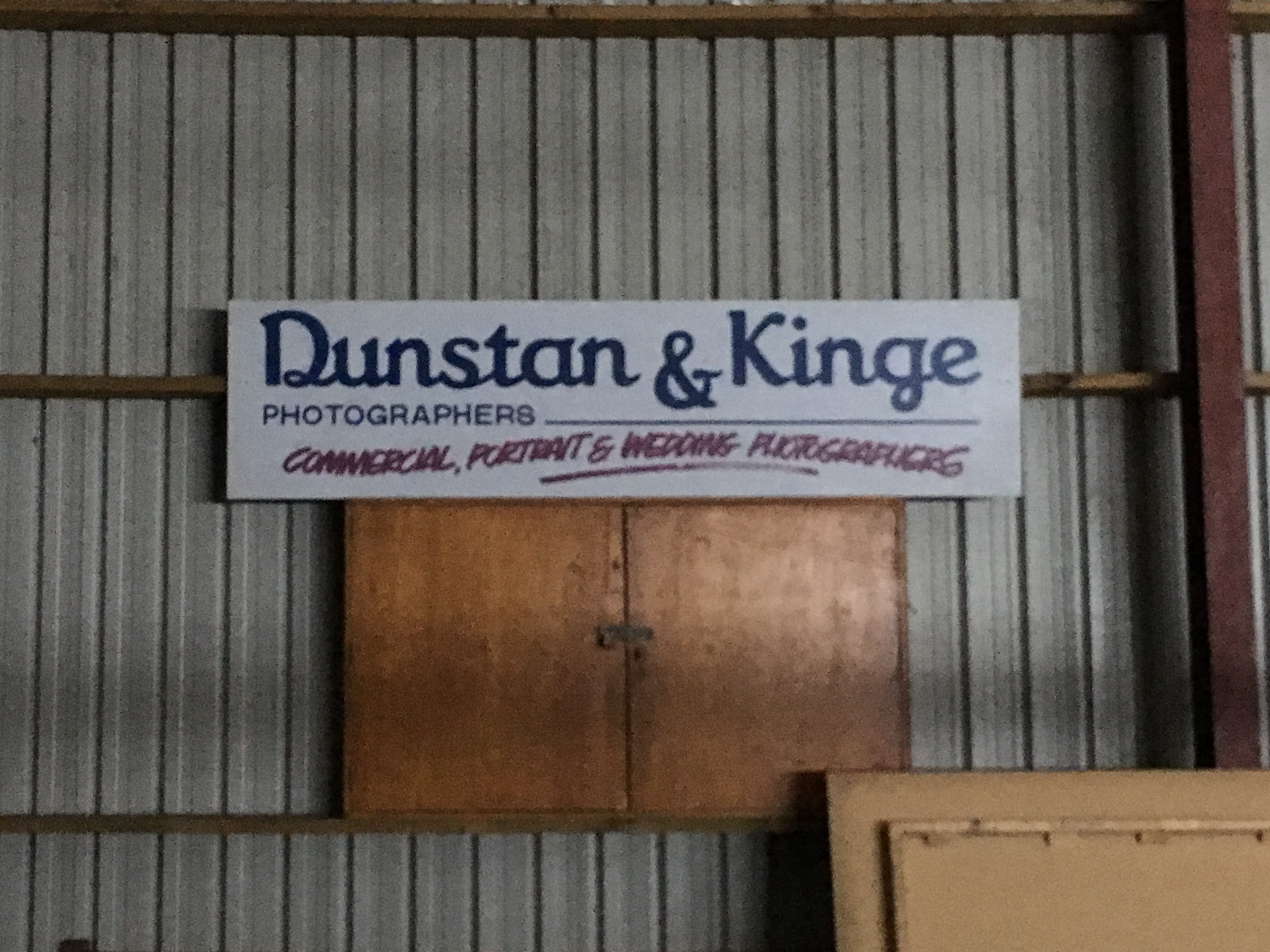 Where there’s still an advertisement for the photography business he owned in Gisborne (just for you Graham)! 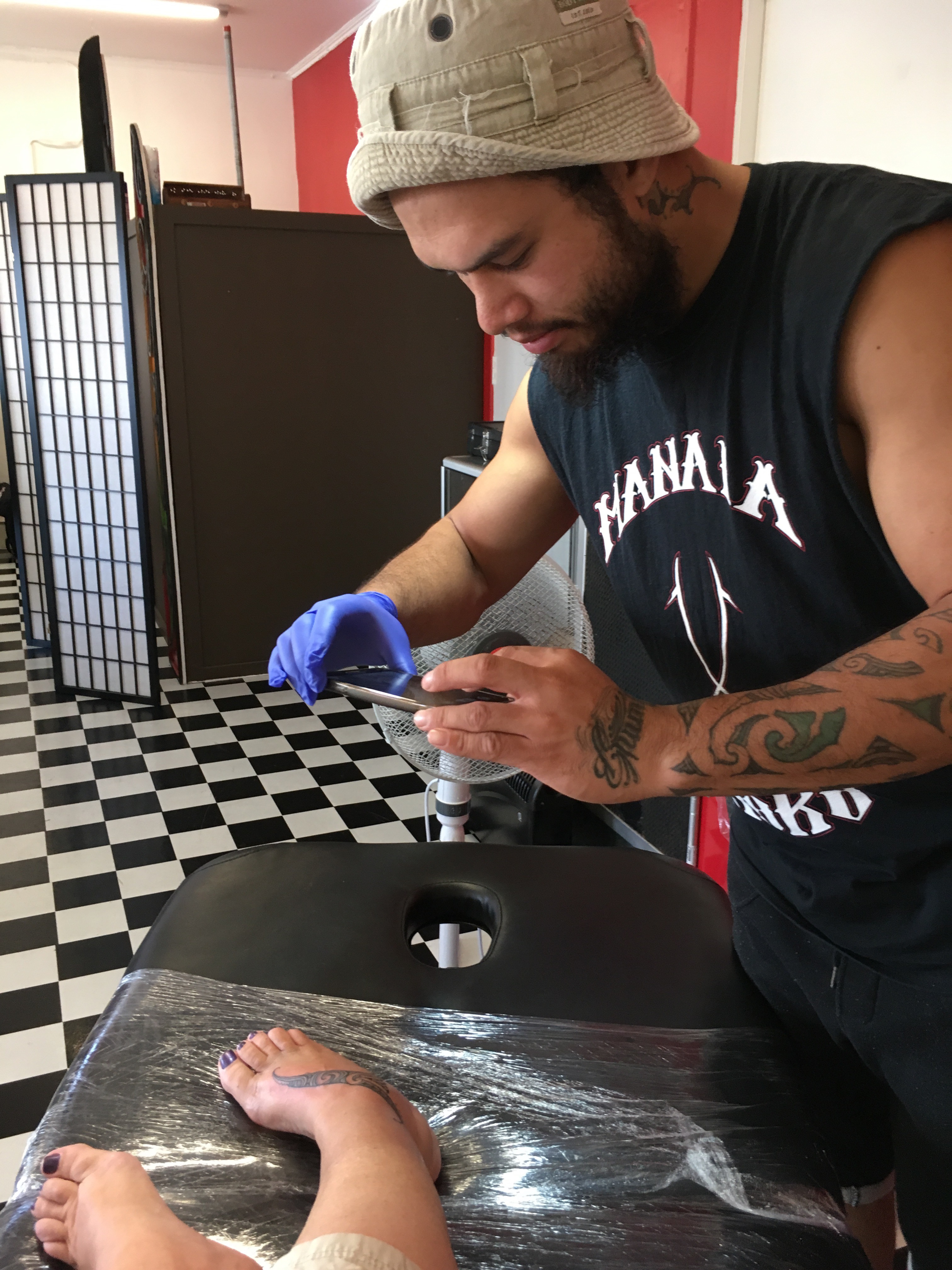 I finally, on my third attempt, booked and followed through with my Maori ‘ta moko’ tattoo – four and a half years after initially planning to have it before I left NZ. Thank you Manaia Moko every second of the pain was worth it – custom designed on the day from my story 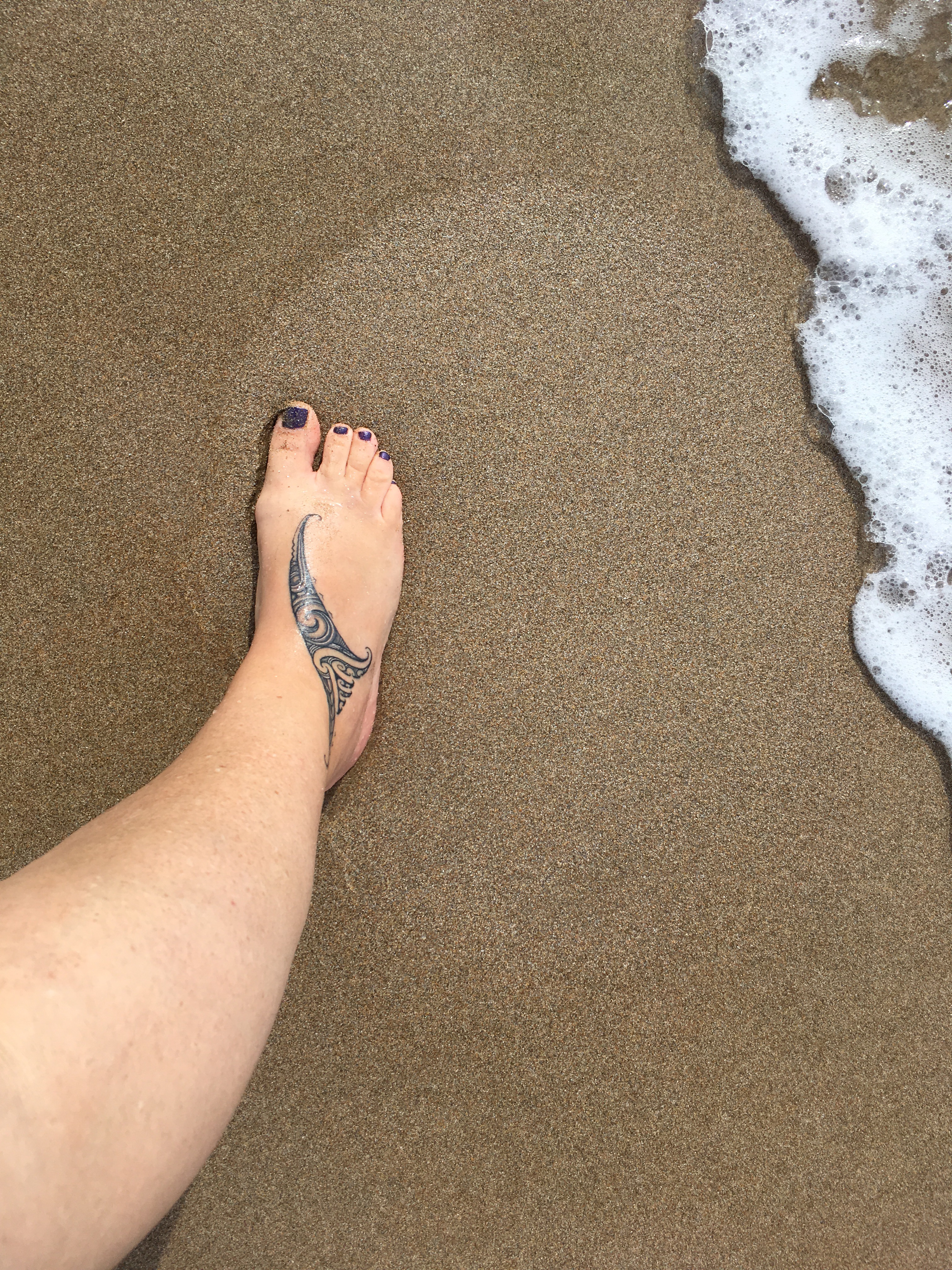 It depicts my journeys, my family, my dad and I absolutely adore it. Placement is crucial, it helps me to feel grounded in the place where my heart sings loudest 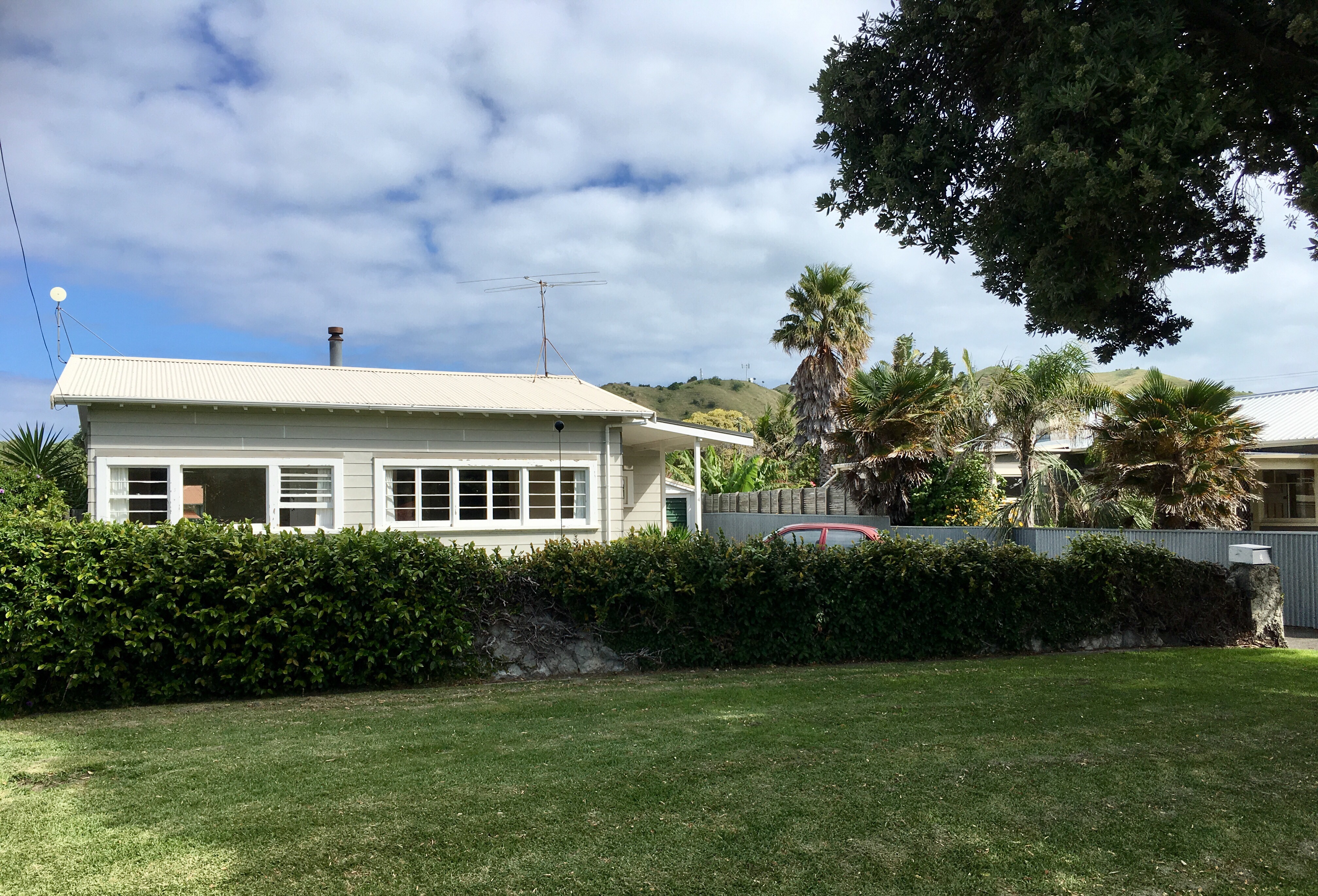 We stayed with friends throughout our stay – we are VERY blessed. The final ten days was spent at Wainui Railway Cottage and it was absolute heaven. I can’t begin to describe how precious this time was for me. Judi and Jasper thank you – look forward to greeting you both on board in a couple of years 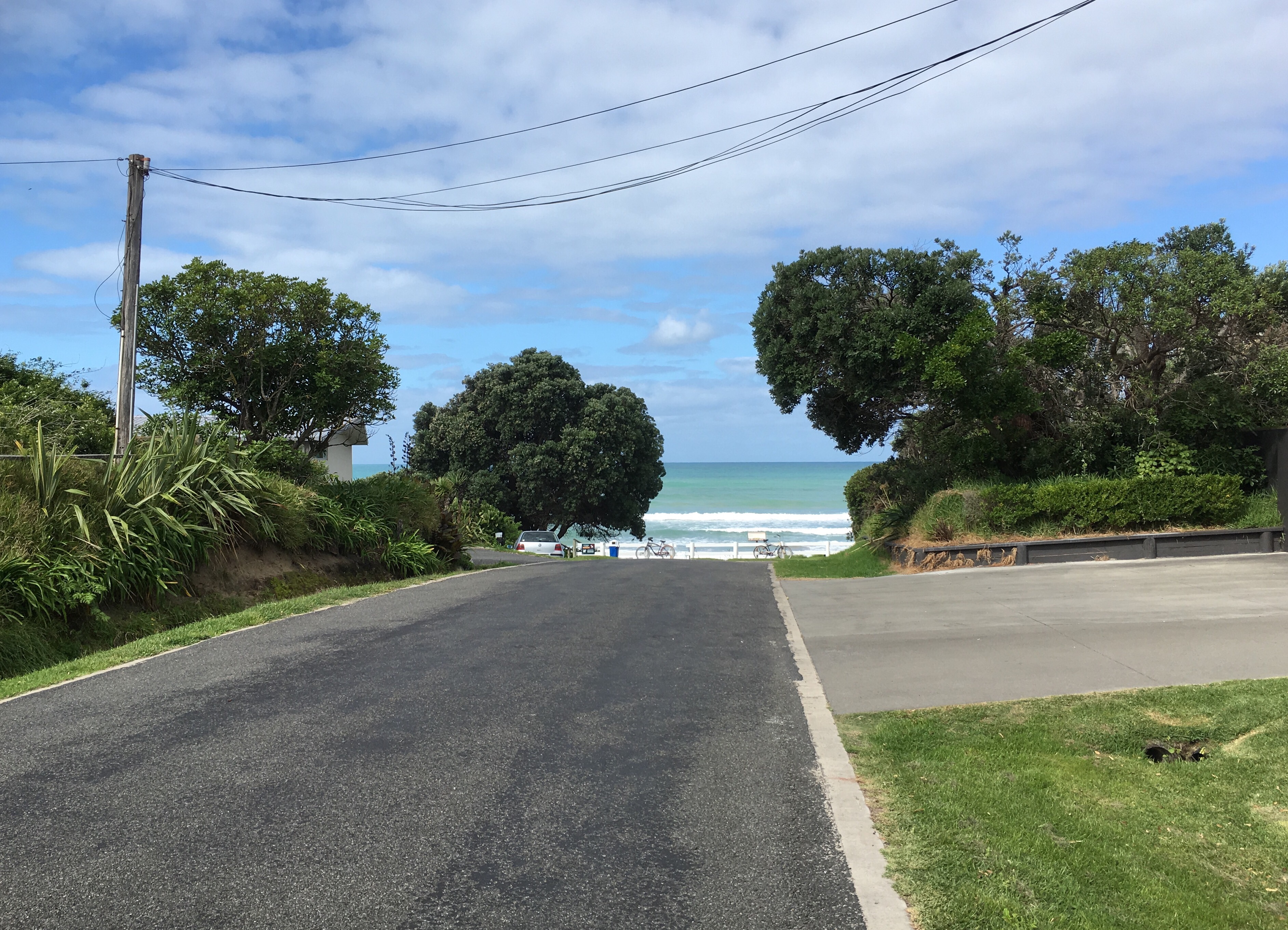 This far from Wainui Beach, my happiest place in the world 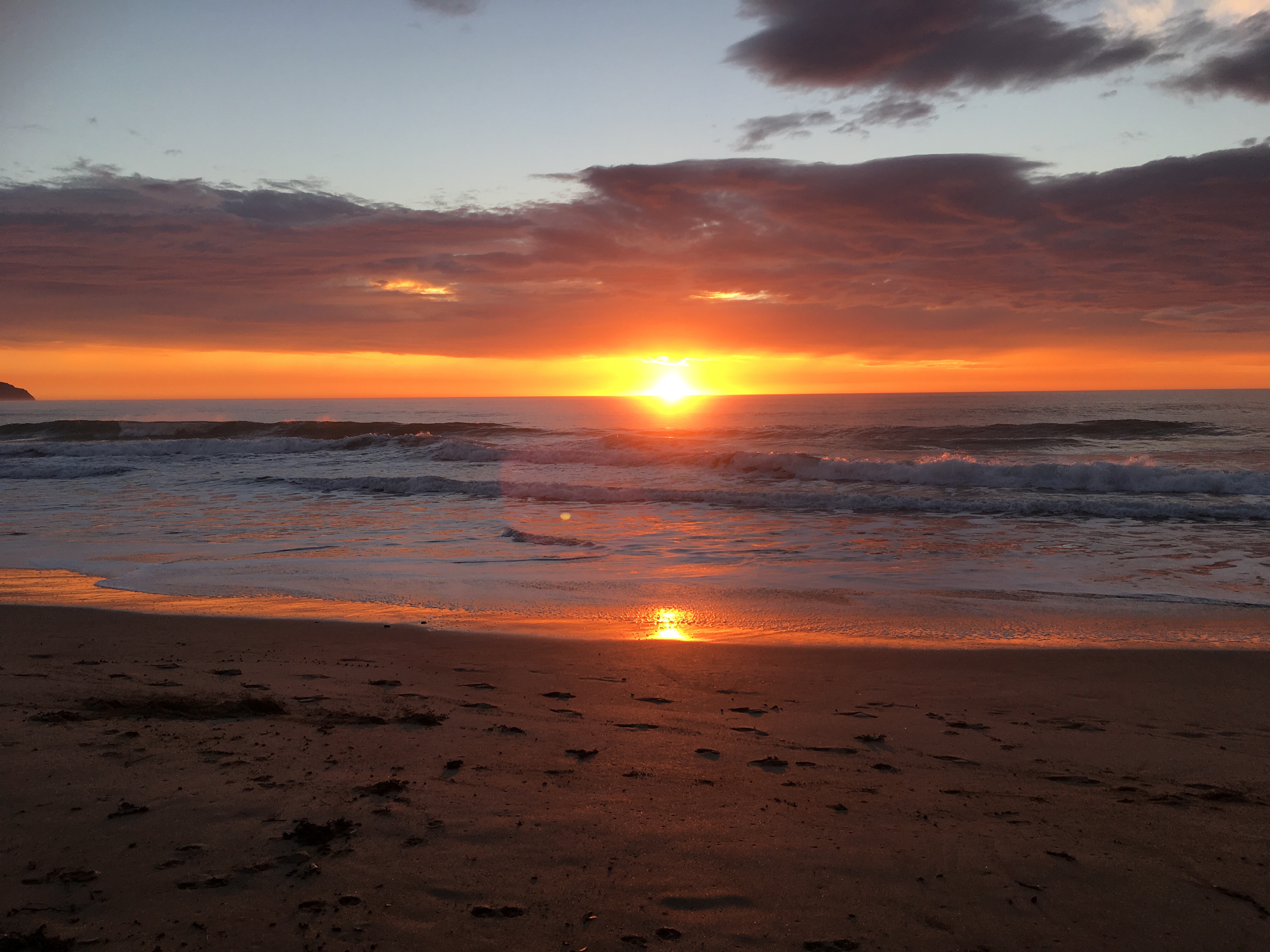 Where, if you get up early enough, you can watch the sun rising in the first place to greet each new day – pure magic 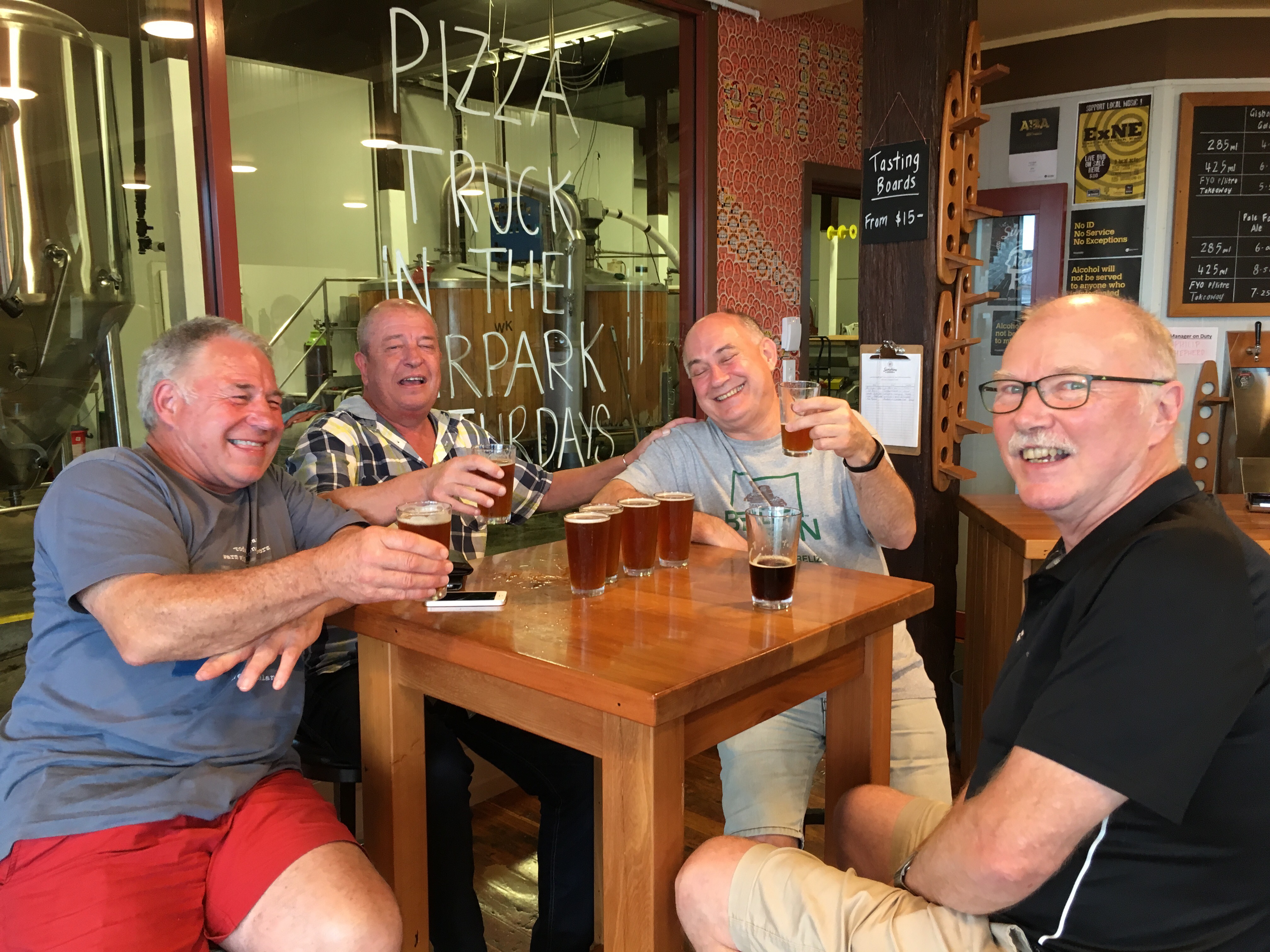 Barry’s happy places are a little different! With some of his besets friends – Lee, Peter and Keith (you’ll be seeing more of Lee in July too!) at Sunshine Brewery Tap Room in Gisborne 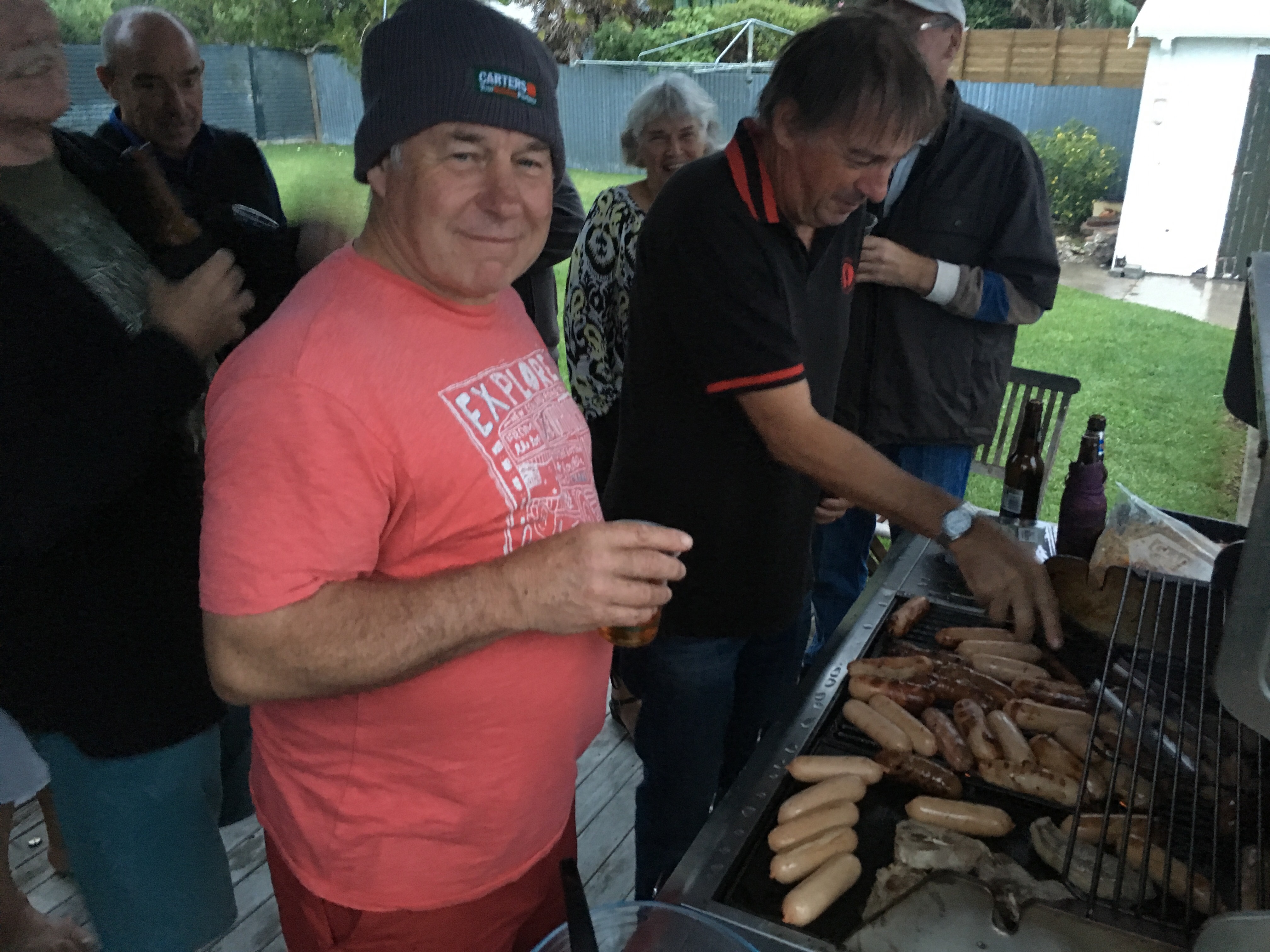 There were far too many gatherings to post photos of – I thought I’d add this one for Barry, who likes to remind me that it rains in Gisborne occasionally too! 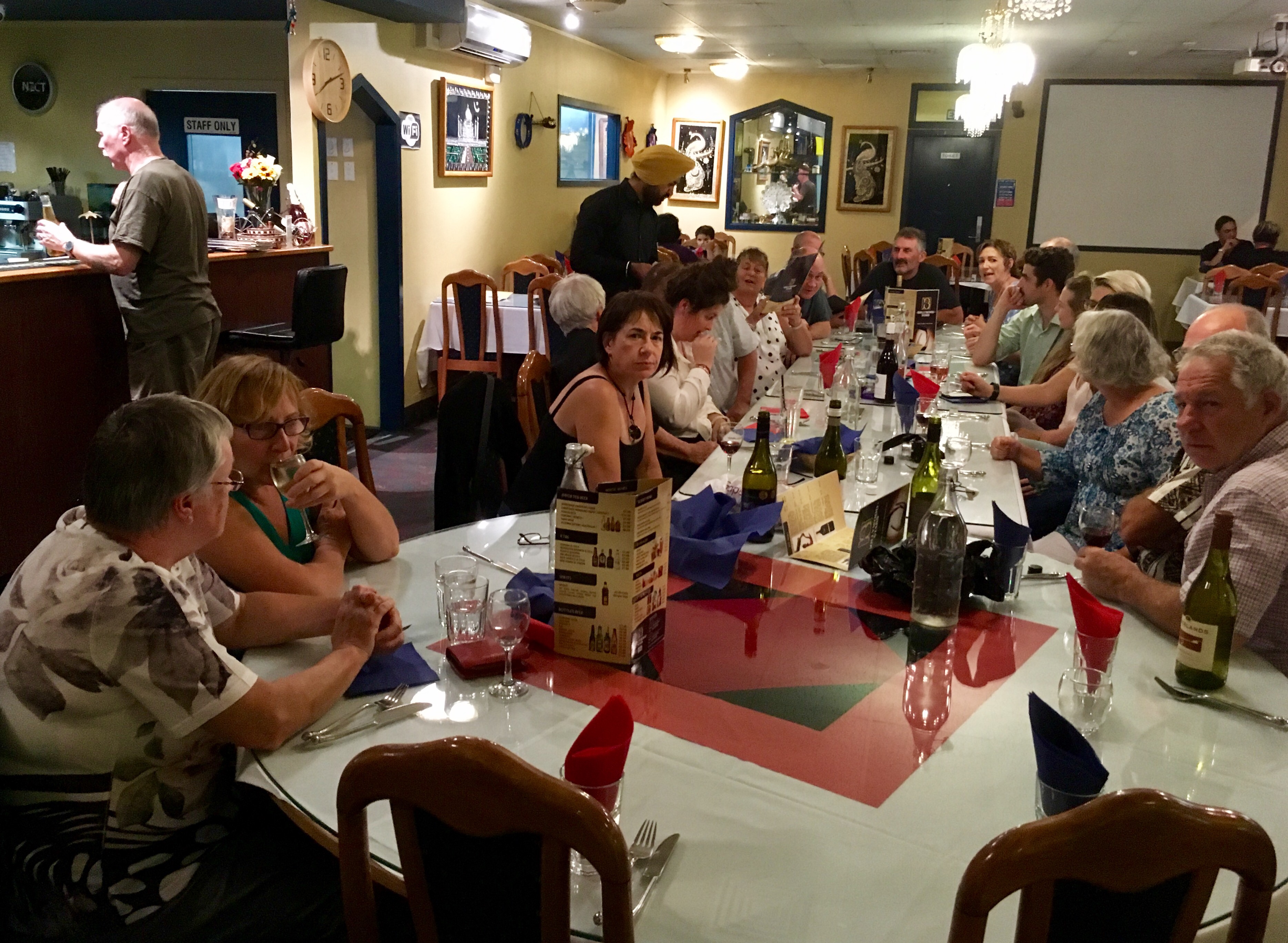 Last night in Gisborne and a large gathering was held at ‘Bollywood‘, a local Indian restaurant 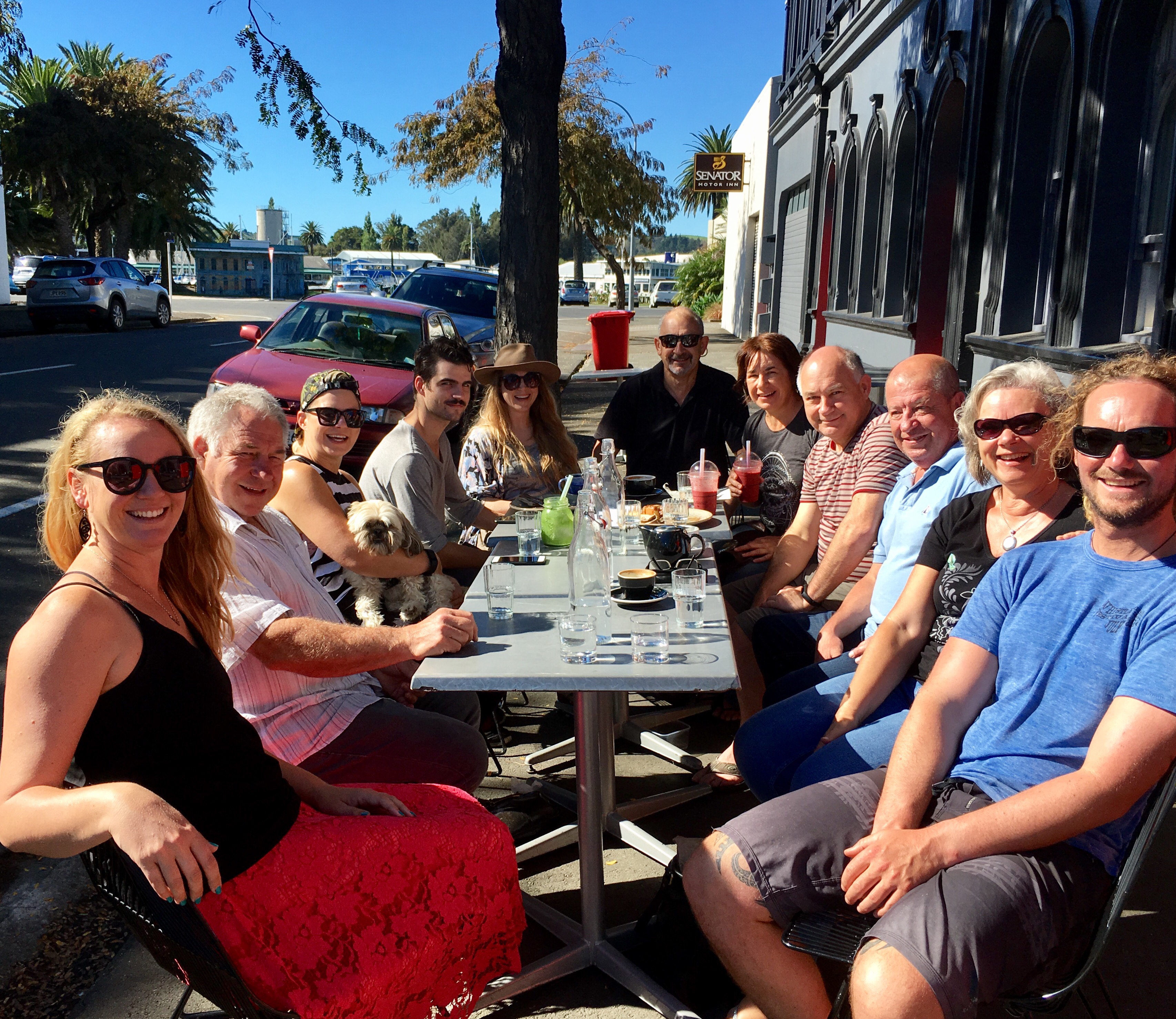 On our last morning in Gisborne the sun shone brightly to say farewell for now, haere mai, and lots of lovely people came to see us off – at Flagship Eatery, where Tom works 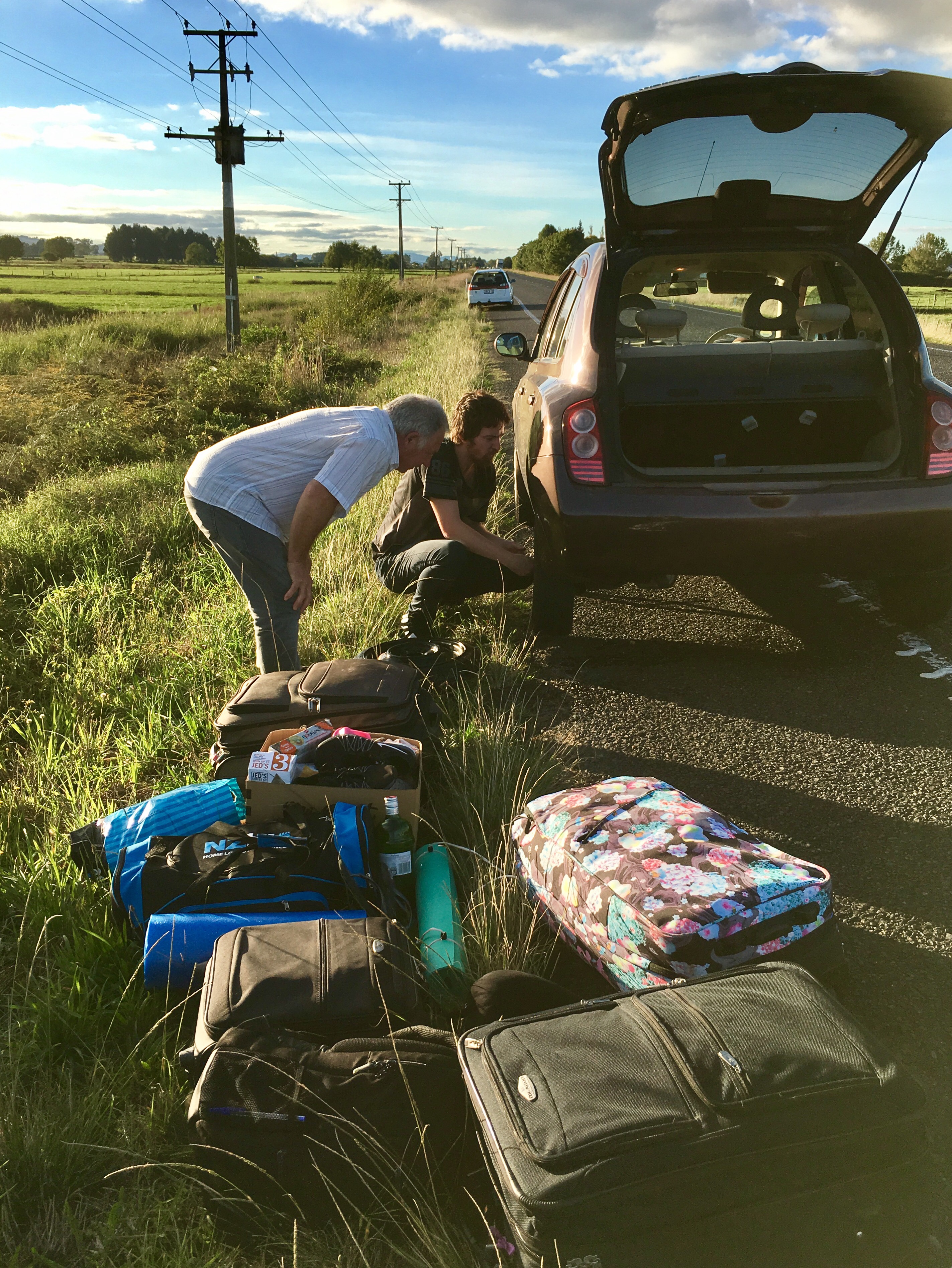 A slight hiccup on the ‘roadie’ to Auckland for our return flight. Seconds after pulling over with a flat tyre, a helpful young kiwi parked up nearby and said he was a mechanic and would have it fixed in minutes. And he did. A minor hold up only, unlike the next one …

The time Barry almost had to stay in New Zealand!!

Luckily we’d left plenty of time to chill at Auckland airport, despite the flat tyre on the seven plus hour journey from Gisborne. Not having access to a printer, we hadn’t checked in on-line.

I went to one of the Air New Zealand check in booths and put my passport in. All good. I said ‘yes’ to checking in another passenger, and placed Barry’s passport on the scanner. REJECT!

I was aghast. Surely there was some mistake.

So I went through the whole process again. Same thing.

My heart was beating a little faster by now. I called Barry over and said it wasn’t taking his passport. Then I realised …

It runs out in August 2017. To enter UK as a foreigner, you must have a minimum of six months left. He had less than five.

There followed an anxious half an hour as we found someone to help, initially queueing in the incorrect place. During this time I was frantically trying to work the implications of Barry having to remain and me flying off. Barry in the meantime, as per usual, was as cool as a cucumber. I’m not sure how he does it. But it’s one of the many things I love about this.

Sure enough, it was fine.

Because he has his residency visa, which is valid until March 2019. 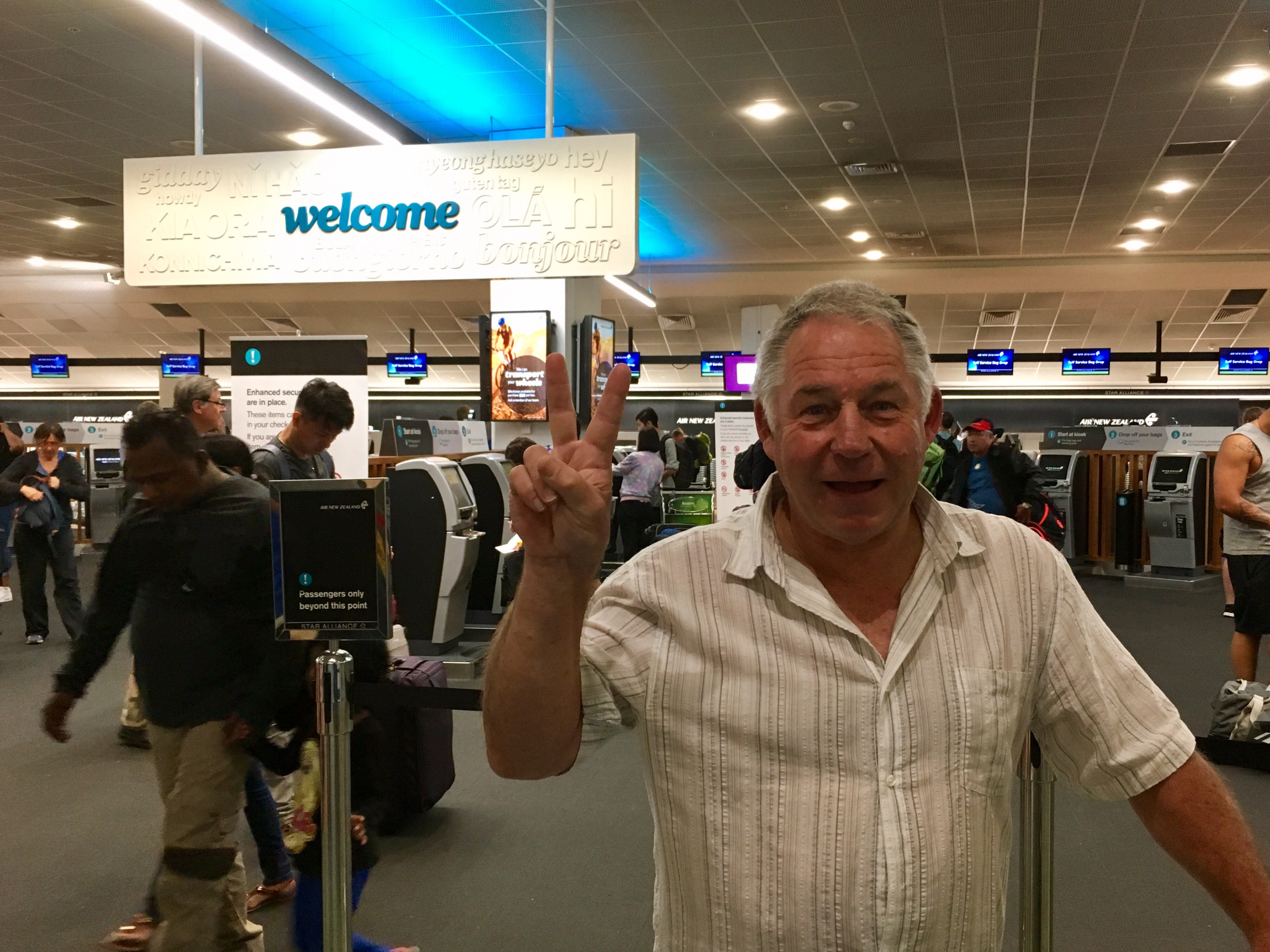 He’s such a jammy whatsit – thank goodness!!! Time to renew your passport before the next flight to NZ (plenty of time then, not likely until 2020 lol)

We arrived into Heathrow on Saturday 1st April, and headed up to mum’s by tube, two trains and a taxi. Barry headed back to Areandare at Hawne Basin the following day, and I drove up to my daughter Lisa’s on Monday 3rd for our youngest grandson’s fourth birthday on 4th April.

I finally got back on board Areandare, after an absence of almost three months, on Thursday 5th April. I have to say it was wonderful to be ‘home’.

Since then we’ve meandered down to Gloucester, a trip we’ve been wanting to do for many years but never quite been able to squeeze in before. 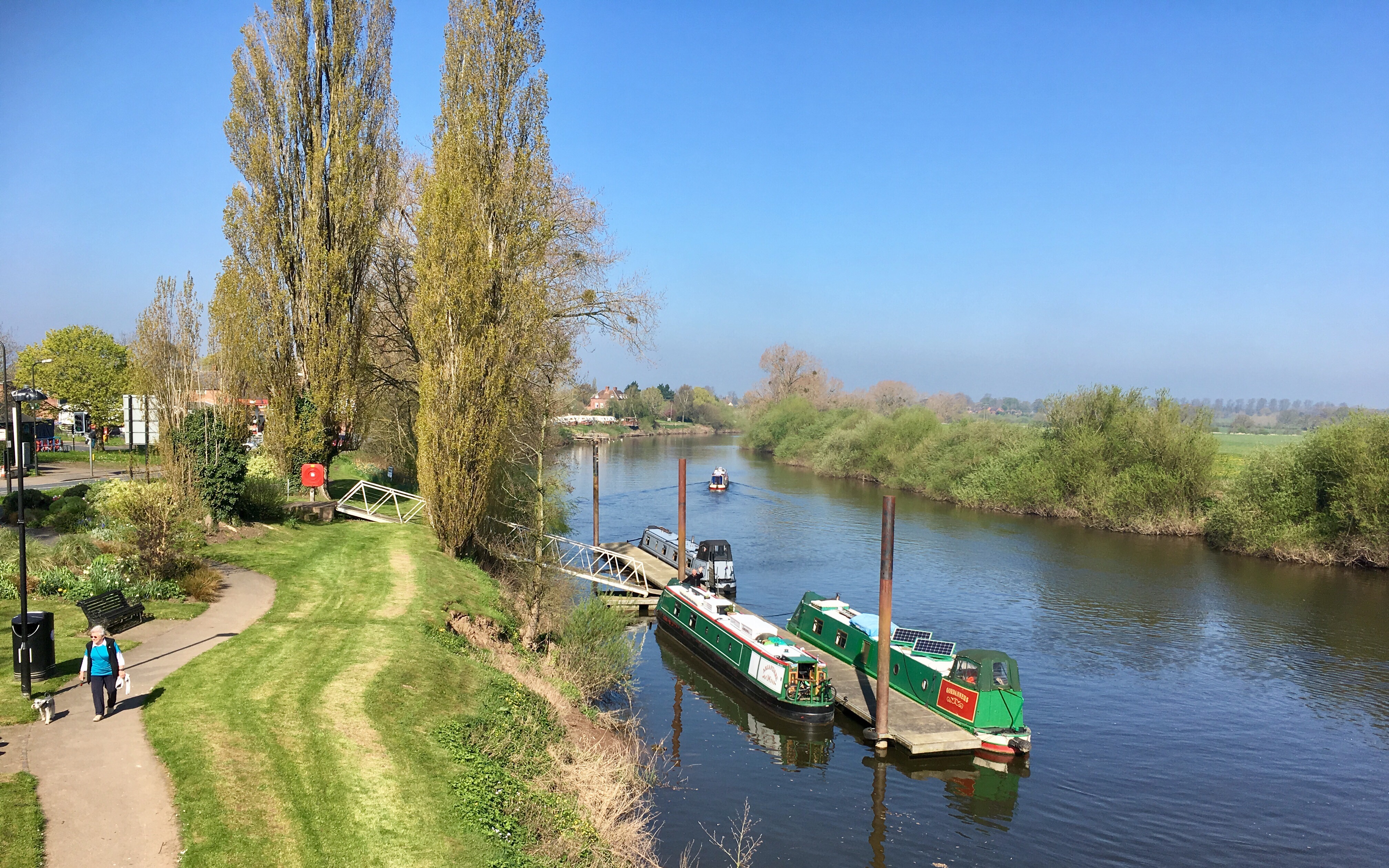 Moored at Upton-on-Severn, for the first time since 2010 when we were here with Northern Pride 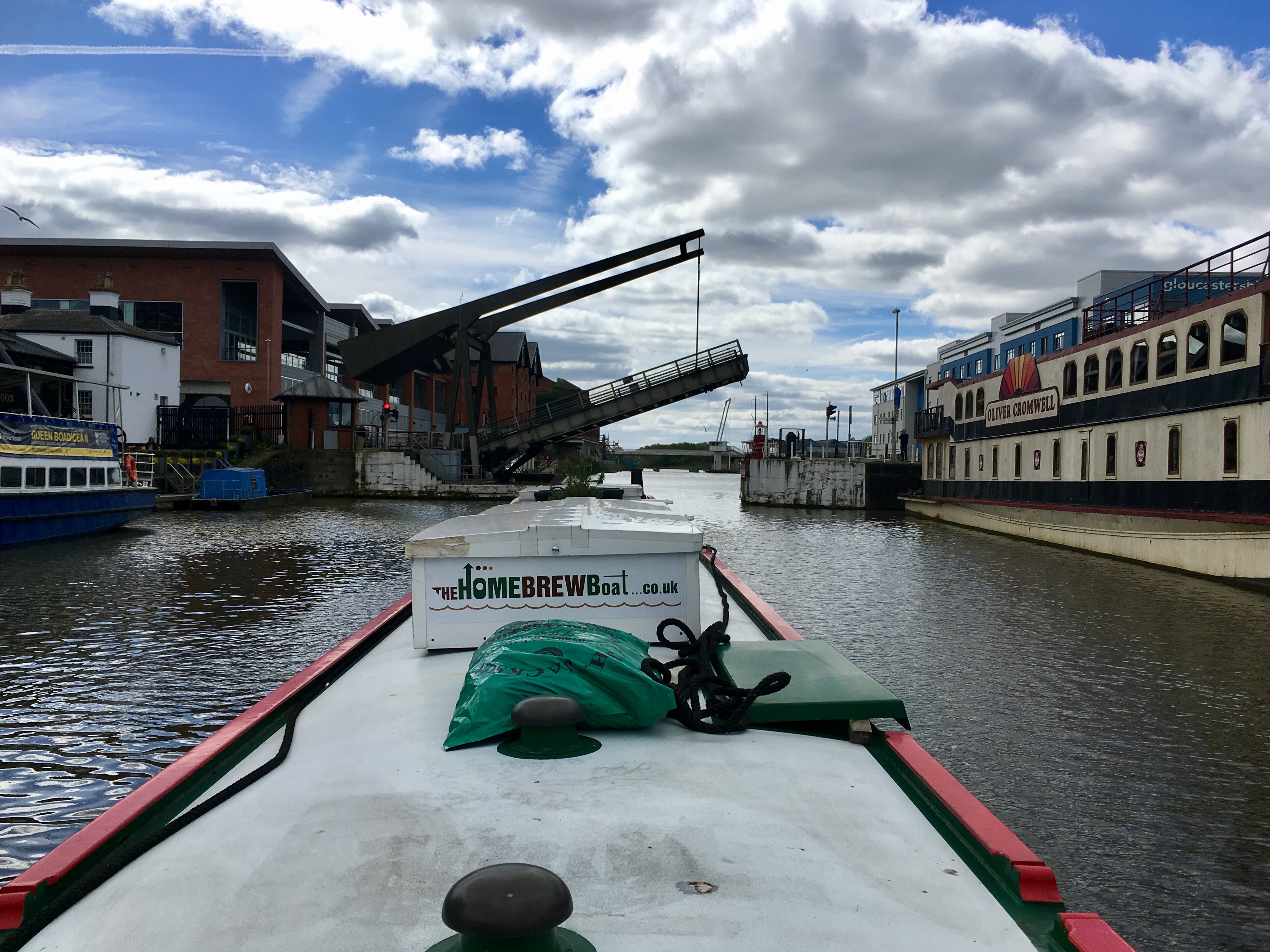 On Wednesday we caught a bus, a train and another bus to mum’s once more. Then we drove to Birmingham – I bought Barry tickets to see The Who for his birthday in December last year. It didn’t quite fit into our cruising schedule but hey ho! That’s yet another joy of our flexible floating lifestyle!

Today, Easter Friday, Barry is (hopefully) mooring up at Shepherd’s Patch, on the Gloucester and Sharpness Canal, near to Tudor Caravan Park, to trade for the weekend. I’ve remind at mum’s as I’ve got a facepainting booking at Hadley Bowling Green Inn, not far from here, on Easter Sunday. Then I’m driving to Brighton on Monday to see my youngest daughter who had knee reconstruction surgery three weeks ago so is on a break from her teaching job in Nigeria until May.

Then in two weeks time, it’s the start of our season of festivals – commencing with St Richard’s in Droitwich, where we’re absolutely delighted to welcome back Helen and Andy, of Wild Side, after their unexpected year off.

I’ve finally figured out how to post from my phone, so my intention is to blog more frequently, and shorter. We’ll see how that pans out aye?

Have fun everyone. Life is too short not to.

2 thoughts on “A brief breathing space to blog again …”