It won’t come as too much of a surprise to hear that blogging has taken a backwards step in our busy lives for the time being. We’re not boating until early April – instead we’re enjoying three months off, relishing the space-between-‘work’ to travel, and be with family and friends in the northern and southern hemispheres. I guess it’s a kind of self-imposed annualised hours contract!

A Nigerian adventure – and a surreal stool story 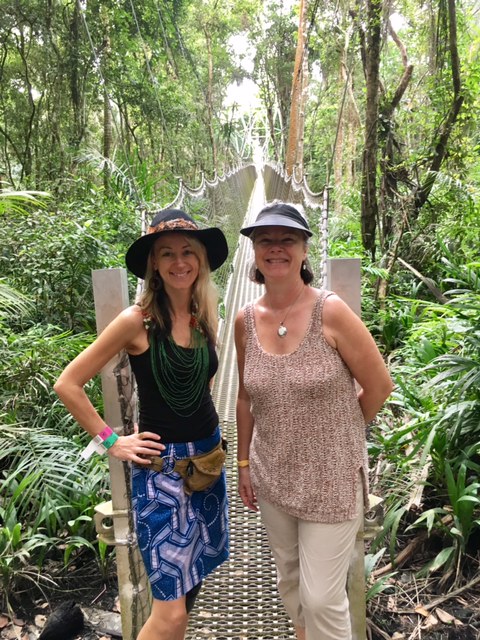 Kim and I in Nigeria 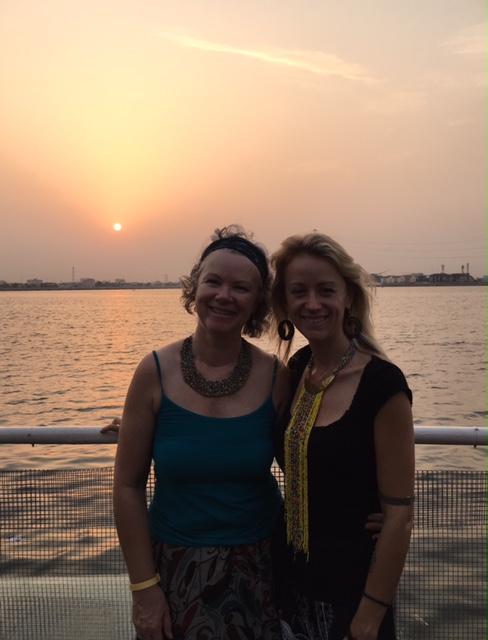 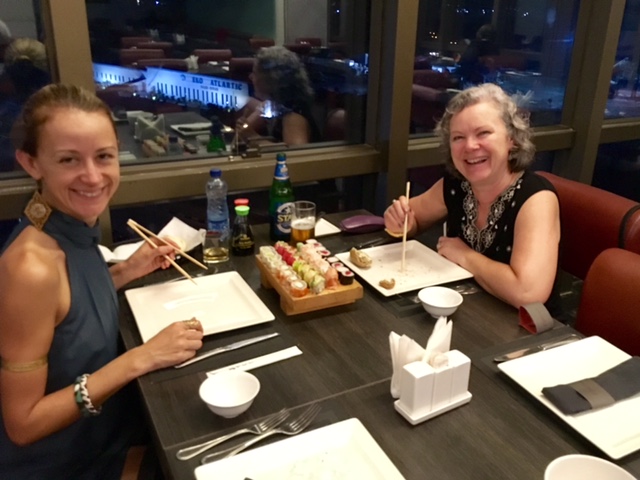 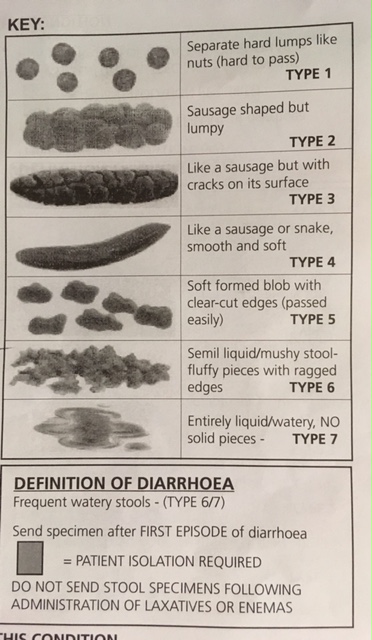 I had a fascinating and fun trip to Nigeria for ten days in January (read all about it here), to stay with my youngest daughter who is teaching there at an International School. Unfortunately this culminated with me being hospitalised, and isolated, five days after returning to UK with a possible ‘infectious disease’. Thankfully all the test results came back negative; whatever had hitched a ride in my gut worked its way out successfully (though revoltingly and painfully …). Having been a midwife for the last 25 years of my career, the ‘stool chart’ I was presented with to fill in for every toilet visit was quite an education (apologies for those of a weak constitution!). 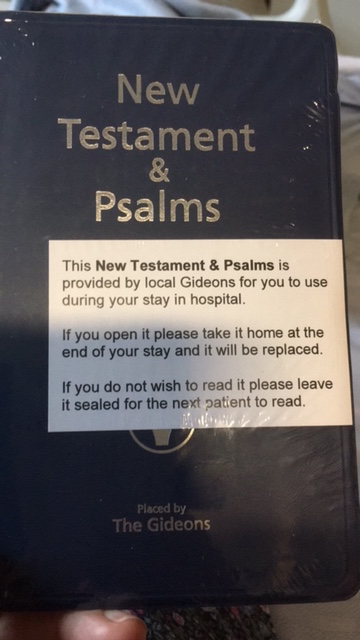 Type 6 and 7 are in the shaded area on the chart, which is where my ticks were consistently placed.

That morning the hospital chaplain popped his head round the door (best not to come in as you had to gown and glove up!) just to say a cheery ‘Hi‘, shortly followed by a text from the adorable Helen from Wild Side, reminding me she was praying for my health. Next minute the Gideon contact came to see if I had one of their bibles in my locker. I didn’t, so he replaced it. I thought I may take a sneaky peak as I’ve not read one for decades – but it came sealed which I thought odd. Till Helen’s detective brain suggested it’s because of the potential infection! So I opened it, and randomly picked a page – it was the story of Jesus healing the sick. That afternoon all my results came back negative, which was a shock for everyone, and from that moment on I started rising up the stool chart each day, without any medication, until by Friday all was ‘normal’ once again.

I’m not and never will be a ‘believer’, it’s just too far fetched and illogical to me. However I was impressed at the turn of events and extremely grateful to whatever force or sureal coincidences may have been on my side. I don’t do ‘ill’, and we’d got places to go and people to see …

Barry meanwhile had remained in Birmingham while I was abroad, getting the boat ready for its BSC, aka ‘Boat Safety Certificate’ (a requirement every four years), which it passed smoothly hurrah! Once I returned we moved to Hawne Basin on 9th February, to begin the process of blacking Areandare’s hull – for the first time in three years.

It was a much-needed job. Barry had joked for a while that I’d find an excuse not to help him, and I’d insisted I would be there. I hadn’t anticipated being incapacitated and totally unable to do more than a bit of scraping on the first day! Maybe there’s some truth in the saying that “… you get what you wish for” husband lol?!

Bless him, he ended up doing it all alone – and a fantastic job he did. He totally deserves a break for six weeks. 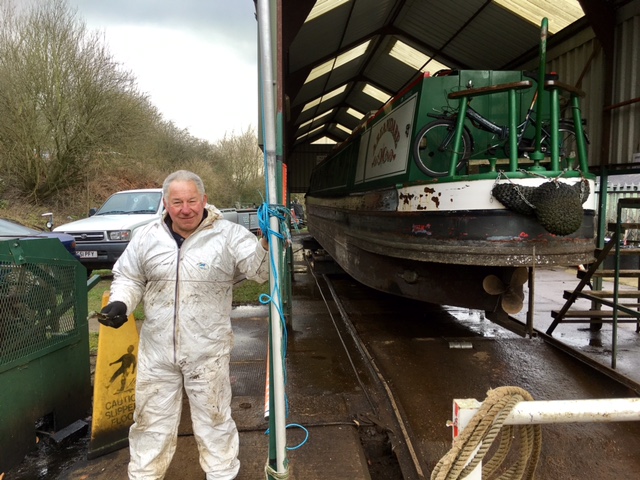 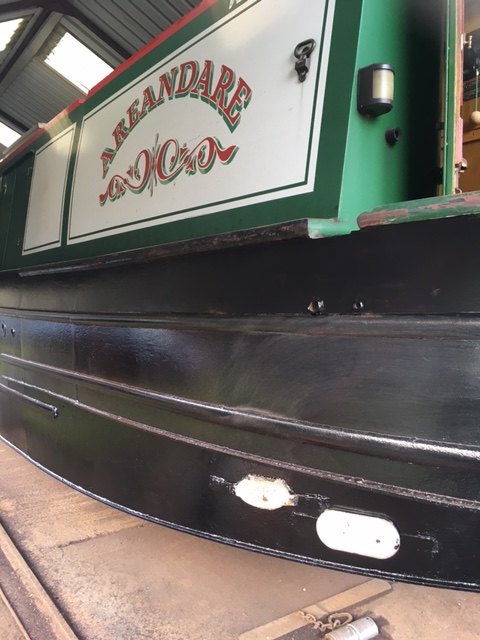 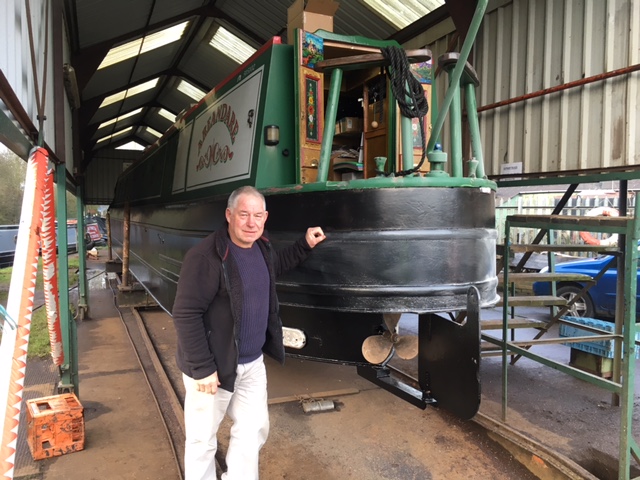 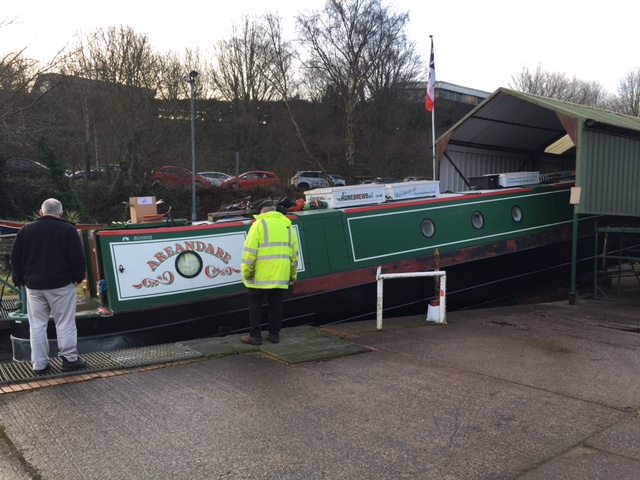 Back into the water

Last week we enjoyed time with our UK family at Northmoor House. As a family, we’ve gathered here many times since 1995, consequently it’s holds an abundance of happy memories and tales of times gone by. My younger sister had brought a video of two visits in 2000 and 2001, when dad was alive and energetic, which were heartwarming to watch and listen him chatting and laughing. This year there were 11 young children running around the enormous building, getting into all sorts of mischief, and loving every minute of it! I overheard my eldest grandson saying to his younger brother on their last afternoon, “I’m really gonna miss this place. Are you?” And he replied “Yes. I am.” Then they hugged each other tightly. Bless them. 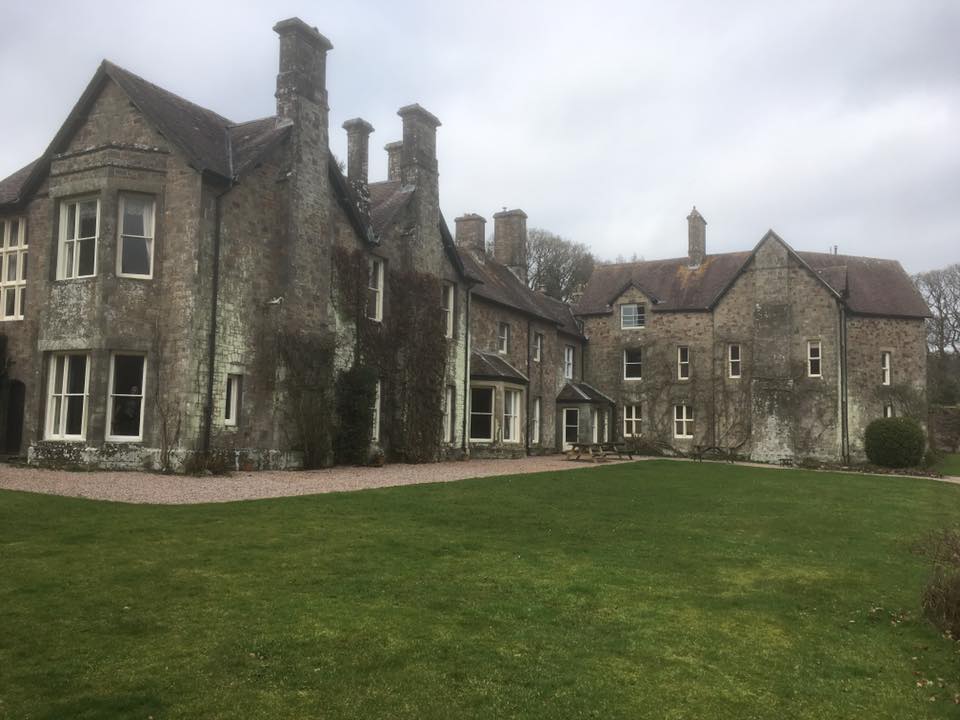 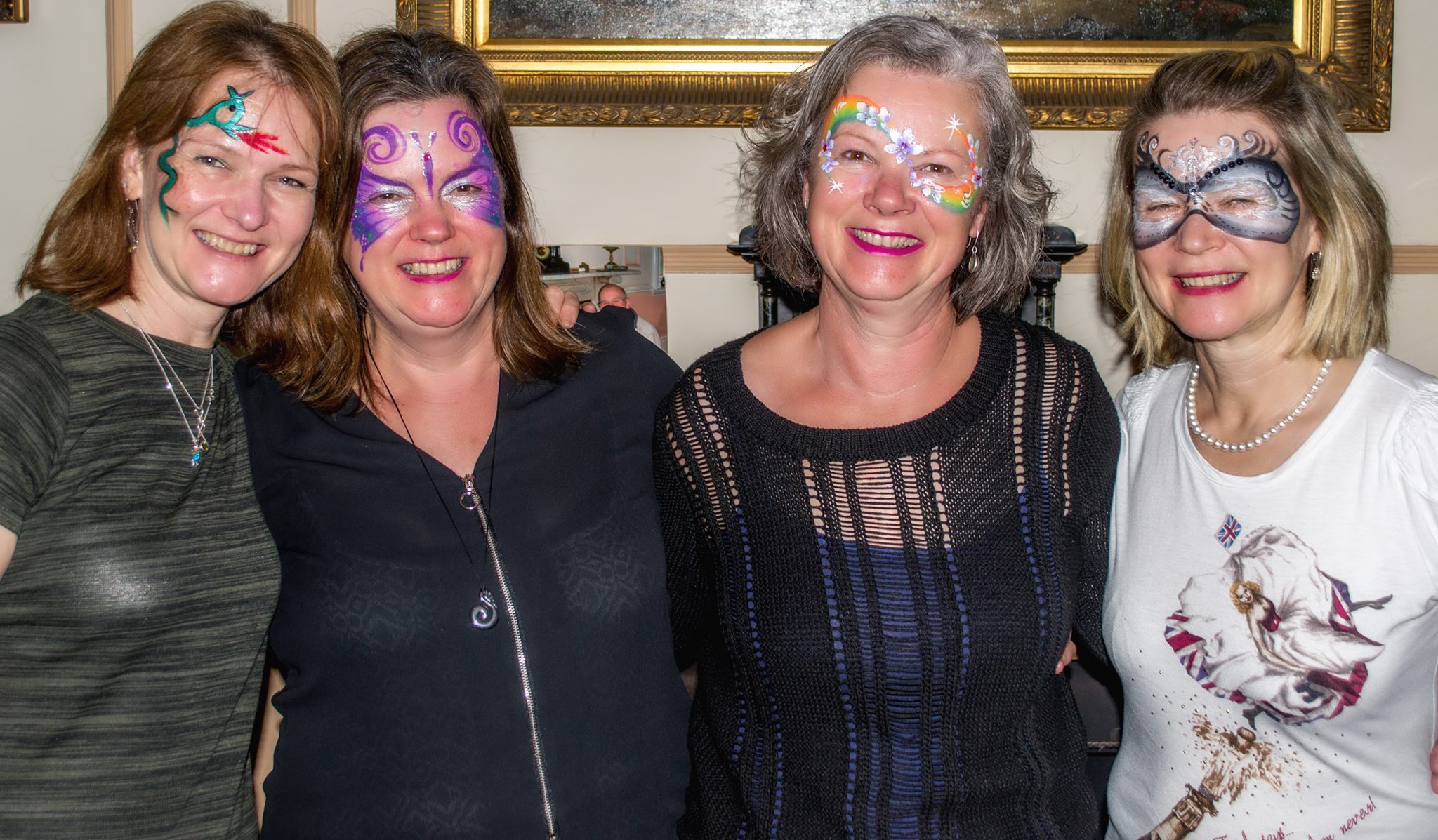 All the Walsh girls at Northmoor 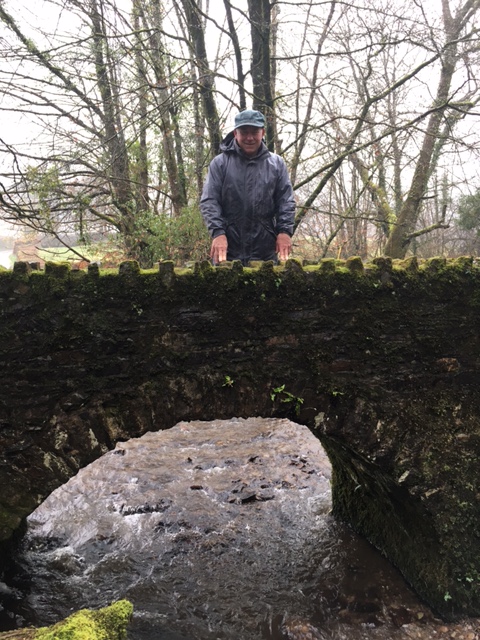 A wild walk in the rain 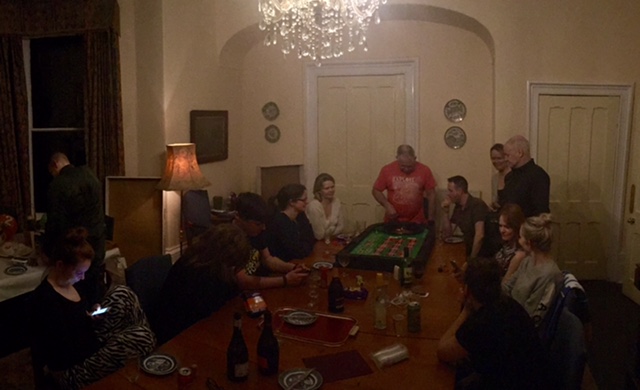 Barry plays the croupier at the casino

Tomorrow we’re flying to New Zealand, to see Barry’s family and friends – and won’t return to UK until 1st April. It’ll be the first time Barry has seen his daughter and son for three and a half years. His sister and brother who live in Australia are also coming for our last week there, I’ve lost track of when he last saw them (his other brother lives in Gisborne, where we’ll be spending most of our time).

Our trading season commences mid-April, when I’ll be facepainting at Hadley Bowling Green Inn, then St Richard’s Festival Droitwich where we’ll both be trading for the fourth year running.

Pay back time in the winter

We’ve applied to have our own ‘Calendar Club‘ store this year, which is likely to commence around the end of September/early October and will entail one or both of us being in the shop or Mall Unit seven days a week until early January. We won;t know until closer to the time where this will be, but it’s likely to be somewhere in the midlands.

While I’m away in New Zealand, I’ll do my best at some stage to continue drafting a post about our Calendar Club experiences and publish it – they’re looking for more store operators and the timings of this could suit many narrowboaters, especially traders.

Haere Ra UK – farewell for now, we’re flying south to the sun! So looking forward to being back in Aotearoa and catching up with so many beautiful people there.

15 thoughts on “Having a blogging break …”