After a couple of weeks in central Birmingham, we’re now moored in Tipton once again. It’s a short walk to the train station here, and much quieter than the big city!

You won’t be surprised to know that living and working on a narrowboat never featured in my long-term ‘life’ plans until the British summer of 2010 when Barry and I decided to leave our respective hamster wheels indefinitely – and live differently. It was a challenge to predict long-term how this would pan-out.

Still, we adventurously (foolishly some sensible folks may say!) jumped off the cliff into the unknown – albeit with a number of strategies we felt may, or may not, come to fruition. One of the hurdles has always been the UK visa application – but it’s also meant we’ve been incredibly focussed!

If you can’t stand the heat …

Returning to midwifery was a potential long-term plan that didn’t work out. And that’s okay. Sad in many ways, but okay. Because to be honest, after much processing of the experience, my heart really wasn’t in it – and the reality of returning to such a high stress, rule and fear-driven, constantly changing and increasing the goal posts way of working, was more of a shock to my system than I could possibly have realised. I take my hat off to those who continue to give themselves to the NHS,  despite the never-ending cutbacks and ever-increasing workload. Have you read the frog in the water story? If the vessel is heated up gently, the frog doesn’t notice and stays inside till it’s too late. However, if you’re dropped right into the heat you notice it starkly – and you’ve more chance of jumping out swiftly!

One of the things the journey highlighted for me was my frequent dislocation from being on board and ‘being’ a trader, or feeling part of the growing trading community. Barry is the registered trader, as The Home Brew Boat, and I’ve been running my Life Coaching and Facepainting businesses alongside.

Opening doors on board Areandare

Making the decision not to continue with the midwifery, has additionally provided an opportunity to reflect and reframe on where I see my/our future. And what a gift that’s been. There’s a saying that nature abhors a vacuum – i.e. when we close one door and another one opens.

In the past month I’ve: 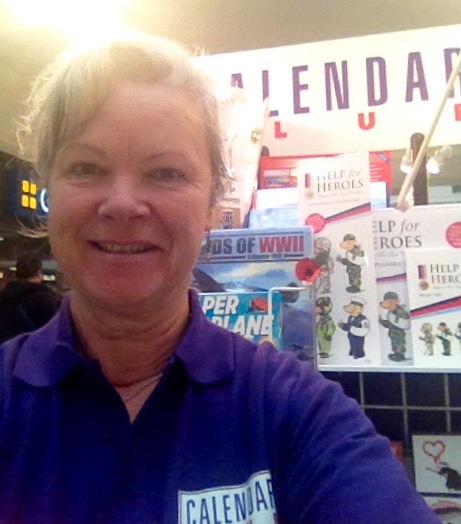 A ‘selfie’ at Tamworth Calendar Club

In just a short while I’ve woken up to the fact that we have many choices and opportunities – mostly to live for today and not freak out about what may happen tomorrow!

Barry keeps me grounded, helps me to put things in perspective and keep any panic at bay when thoughts arise and take over my head like “What on earth are we doing? How will we survive when we’re old (oldER I guess!)?

It’s a common fear. I’ve heard it from many people. Even those who appear to have a reasonable income, a house to live in, and a state pension. It’s as though we’re all being conditioned to be afraid to live. And it reminds me of a powerful passage from one of my favourite authors, Paulo Coelho, in the book ‘By the River Piedra I Sat Down and Wept’:

“What is the Other?” they ask.
The Other is the one who taught me what I should be like, but not what I am. The Other believes that it is our obligation to spend our entire life thinking about how to get our hands on as much money as possible so that we will not die of hunger when we are old. So we think so much about money and our plans for acquiring it that we discover we are alive only when our days on earth are practically done. And then it’s too late.”
And you? Who are you?”
I am just like everyone else who listens to their heart: a person who is enchanted by the mystery of life. Who is open to miracles, who experiences joy and enthusiasm for what they do. It’s just that the Other, afraid of disappointment,kept me from taking action.”
But there is suffering in life,” one of the listeners said.
And there are defeats. No one can avoid them. But it’s better to lose some of the battles in the struggle for your dreams than to be defeated without ever even knowing what you’re fighting for.”
That’s it?” another listener asked.
Yes, that’s it. When I learned this, I resolved to become the person I had always wanted to be. The Other stood there in the corner of my room, watching me, but I will never let the Other into myself again—-even though it has already tried to frighten me, warning me that it’s risky not to think about the future.
From the moment that I ousted the Other from my life, the Divine Energy began to perform its miracles.”

A plug for a kindred spirit

These recent events have reminded me of a number of comments we’ve received from a lovely lady this year, who’s trying to persuade her husband to leave the rat-race for a while:

“I am currently trying to persuade my husband to take some time off from work (he won’t even take his allocated paid holidays), but the challenge is a tough one. We are Millenials (just about!), with two children under the age of 6. My plan is to manifest enough money for a camper van, so that I can take my daughters exploring all around the UK and beyond. I want to start with heritage trails, stone circles and the like, and pitch up my camper in random locations. It will happen, but whether I can persuade my husband to join us is another matter … I love reading about your boating adventures.”

She writes a popular blog and has published a number of books about the paranormal, short stories, and  ‘Redcliffe’ novels, you may be interested in. What an inspiration!

Catherine, I hope one day you manifest your vision – hopefully along WITH your husband …

9 thoughts on “Off season sustainability and commuting conundrums”