So much has happened since I last blogged. I frequently have an intention to post an update, and then get waylaid …

Consequently I’ve a strong suspicion the blog could be a casualty as one of the spinning plates that I’ll allow to stop spinning temporarily, on and off, over the coming weeks and months.

I’m keenly aware of my previous (and occasionally current) propensity to spread myself too thinly, and then experience that engulfing, panicky, overwhelm feeling. It’s not good for my health, adrenaline coursing around my veins and picking up a dose of cortisol to boot could seriously reduce my lifespan and I’d rather take steps to prevent it whenever possible.

Being mindful of this means I’ll find a way to keep the balance of our boating life and businesses, and our land-life commitments in the autumn and winter.

It remains to be seen how successful that’ll be …

Now we’ve got the fantastic news of the success of Barry’s second round UK Spousal Sponsored Visa application, we’ve been able to plan a trip back to New Zealand to see Barry’s daughter and son, his brother, and lots of lovely friends. 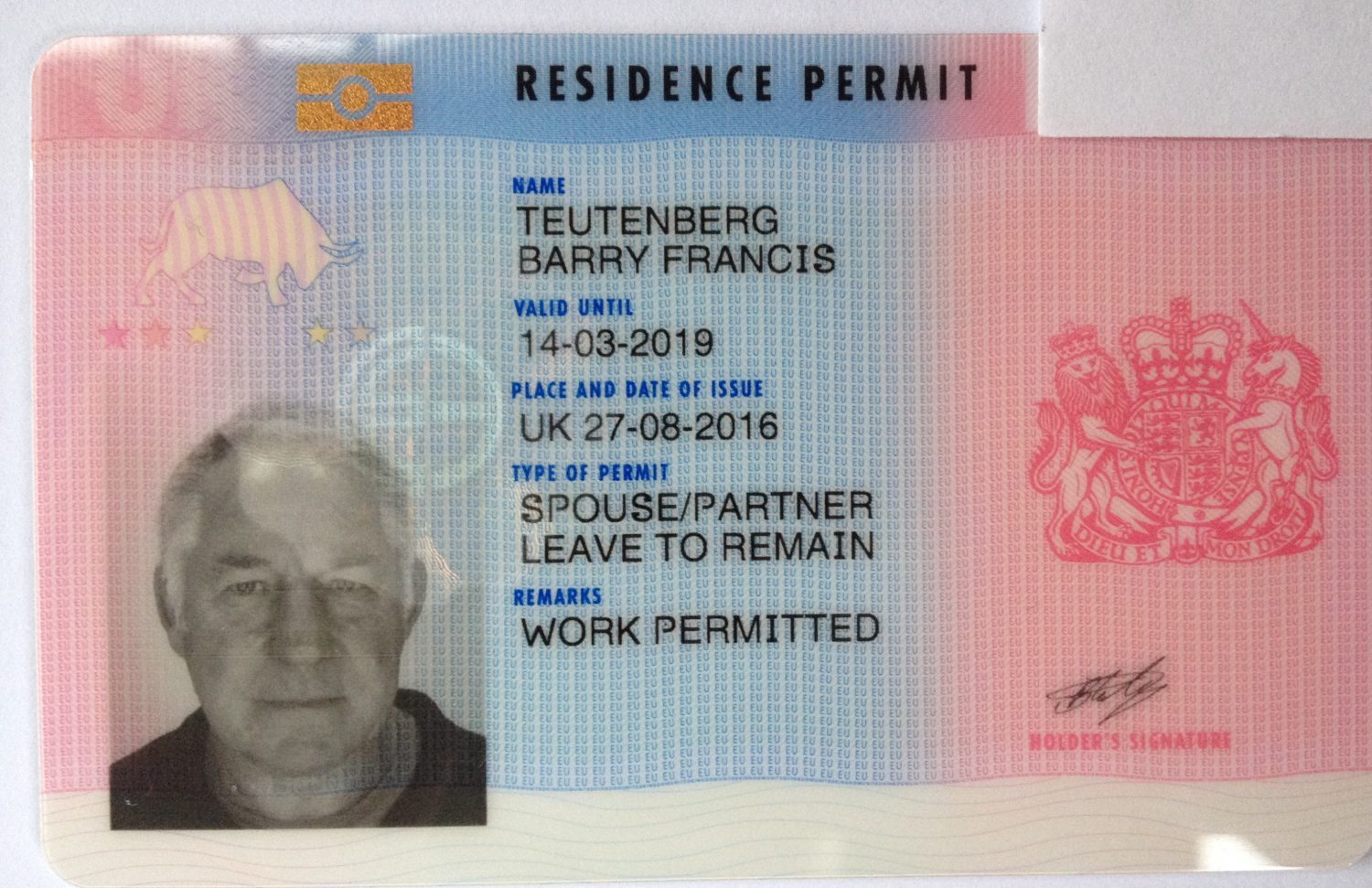 We’ve got a Walsh whanau/family week away from 17th to 24th February 2017, at Northmoor House, and then will be flying from Heathrow to Auckland on 27th February. We leave on 1st April. Which will give us four and a half weeks to re-connect with our loved ones there. Splendid!

September is a full-on festival month for us.

The final one for the season.

It’ll be sad to stop, we’ve so enjoyed trading alongside the many lovely traders who we’ve got to know over the last few years. Hopefully they’ll all find ways to support themselves through the winter months and we’ll see them again from April 2017.

The great British weather has put a bit of a dampener on our last two festivals, with rain keeping many punters away. I didn’t even take a photo of the Stourport one – my excuse is I was with mum on the Friday and Saturday, then on the Sunday I drove up to Overwater Marina to facepaint at their Fun Day.

Stourport was a lovely social occasion, helped by the endearing presence of ‘Toastie’, who generously made a chicken curry for fellow traders not the Friday evening (sadly I missed that), and then a chilli on Saturday which I thankfully got a chance to enjoy. 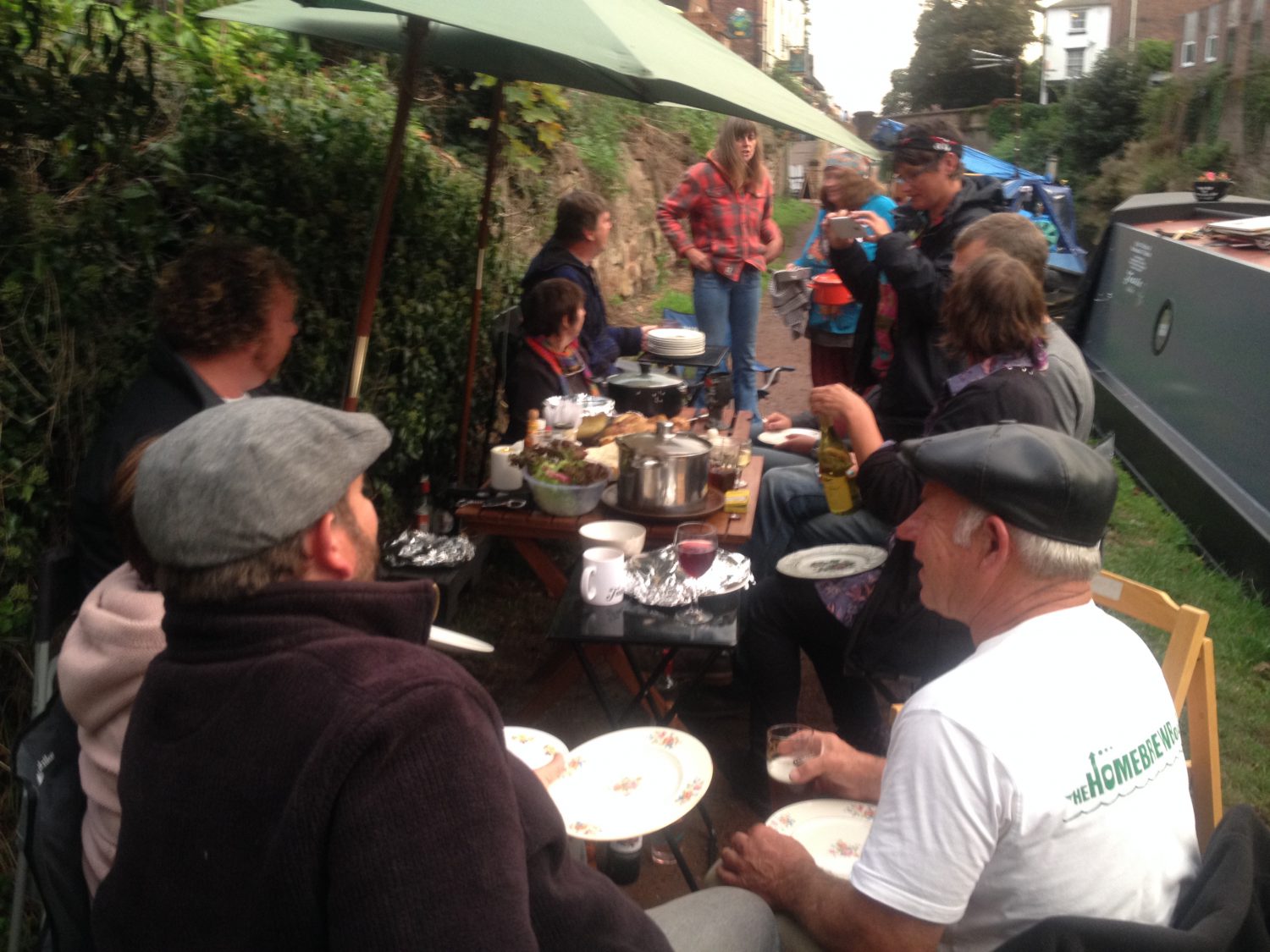 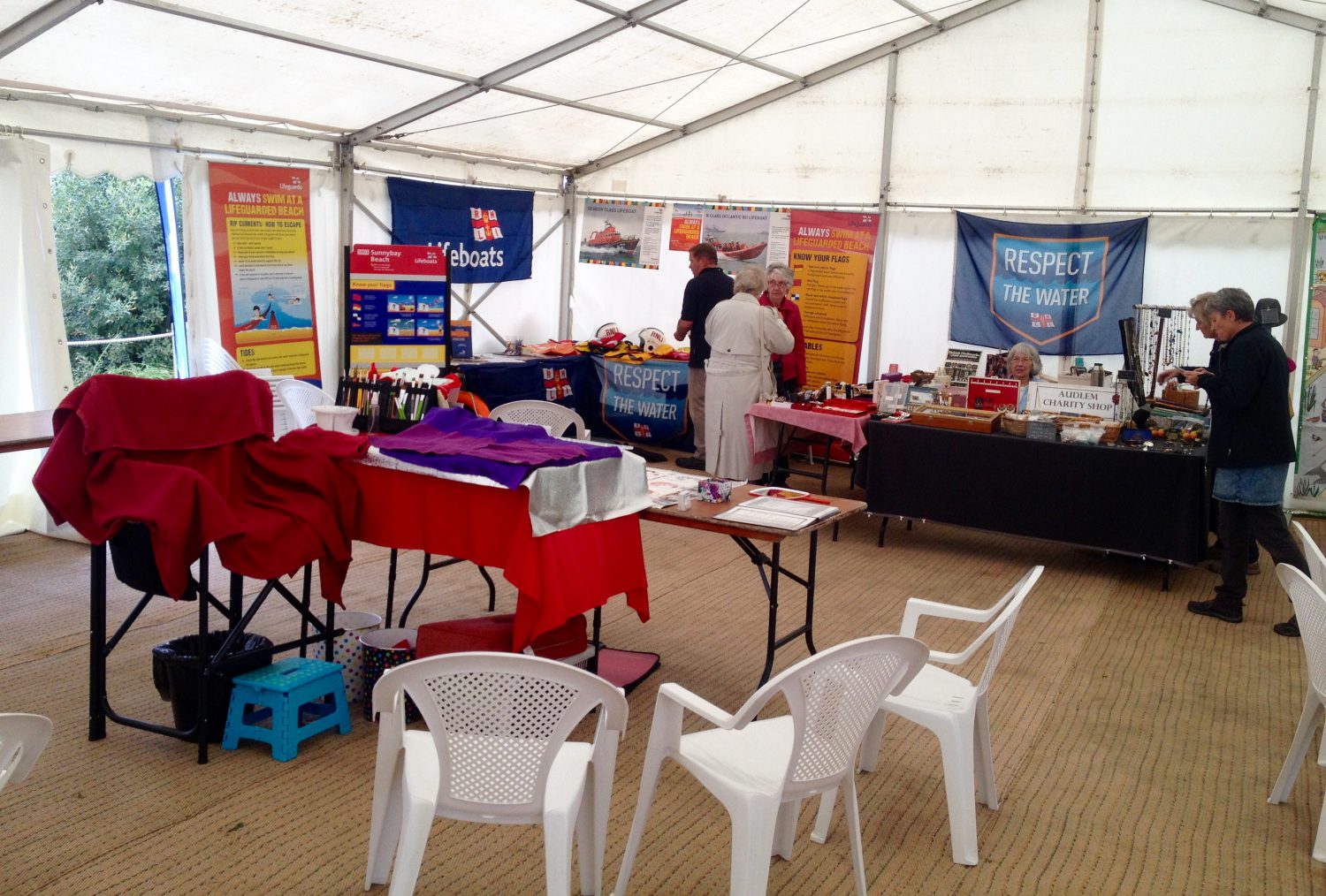 Facepainting set up in the marquee

It’s one of the many things we love about our lifestyle. Sitting out on the towpath chatting to people who share our desire to live differently. Swapping stories about what works and what doesn’t. Supporting each other to make it work. Spending time socialising in a mindful way – not watching a box of tales of the lives of other people, or reports of horrors in the world that we have no control over or (mostly) any need to know/be aware of.

It was our third in a row Black Country Boating Festival, and incredibly the 31st in succession that’s been held. The trading was great, but the social life was spectacular.

We started out on Thursday evening last week with a walk to Ma Pardoes for a couple of drinks with some of our compatriots, and on Friday and Saturday we relished time in the ‘beer tent’. Saturday night was utterly brilliant, or ‘bostin’ as the folks around the Black Country would say. The outstandingly talented cover band The Reflections played from 9pm to after 11pm, and for at least an hour of that time there were a fair few ‘senior’ narrowboat traders boogying and bopping as if they were 19 again.

It had rained persistently on the Saturday, so the crowds were a little subdued – however the sun made a welcome appearance on Sunday and kept the damp at bay. Those of us who’d used up a fair proportion of the energy not the dance-floor were feeling the effects last night of buying the candle at both ends – three nights out in a row, plus two days trading.

No complaints though – we had a marvellous weekend. With added bonuses of some freshly grown and picked veggies from one of the traders with a nearby allotment, and catching up with Andy from Wild Side and The Jam Butty on one of their few trading events this season.

The volunteers from the Worcester, Birmingham and Droitwich Canal Society work tirelessly to organise this event and many others – and they’ve become good friends too. Thank you to you all. 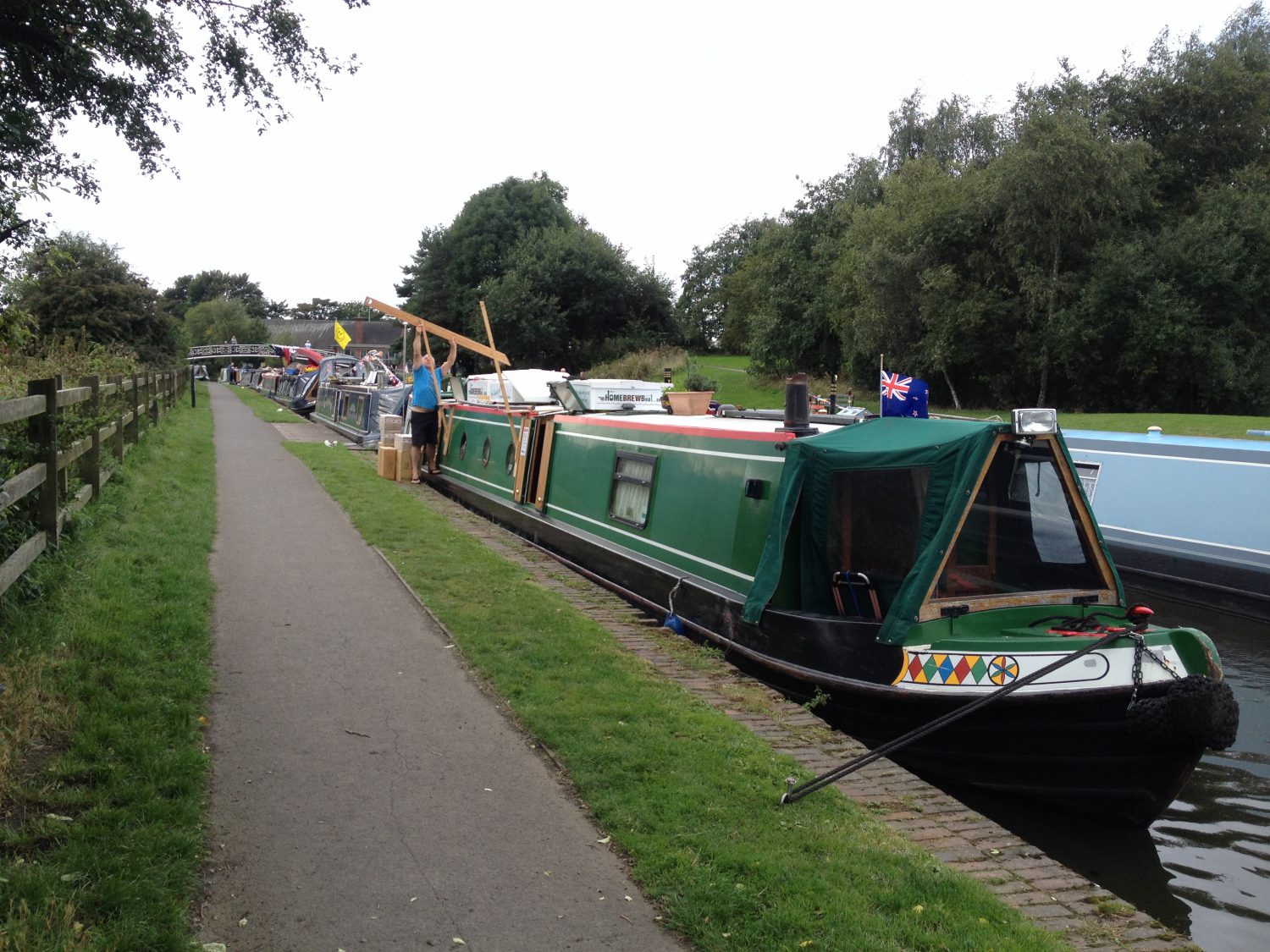 Setting up The Home Brew Boat 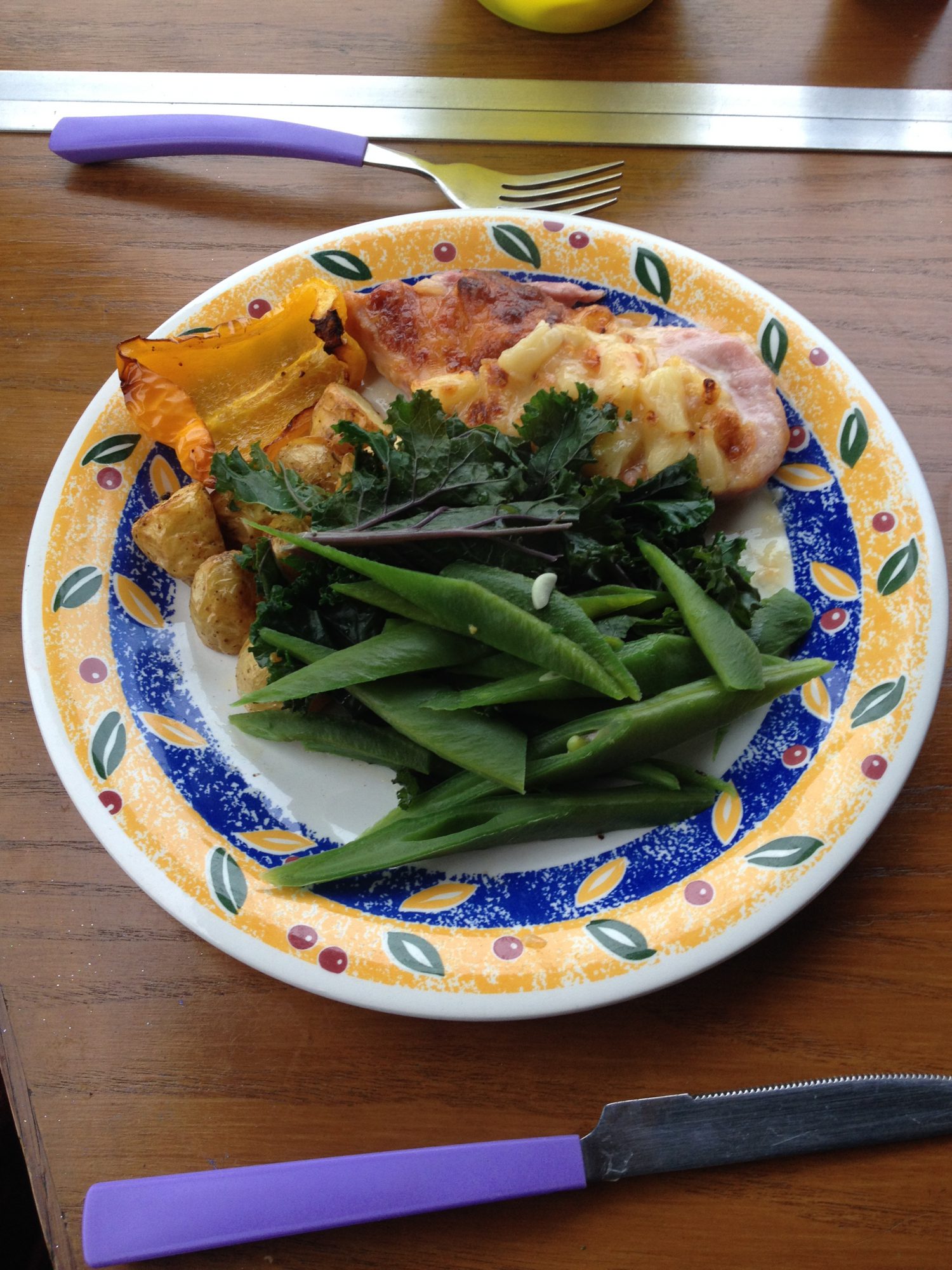 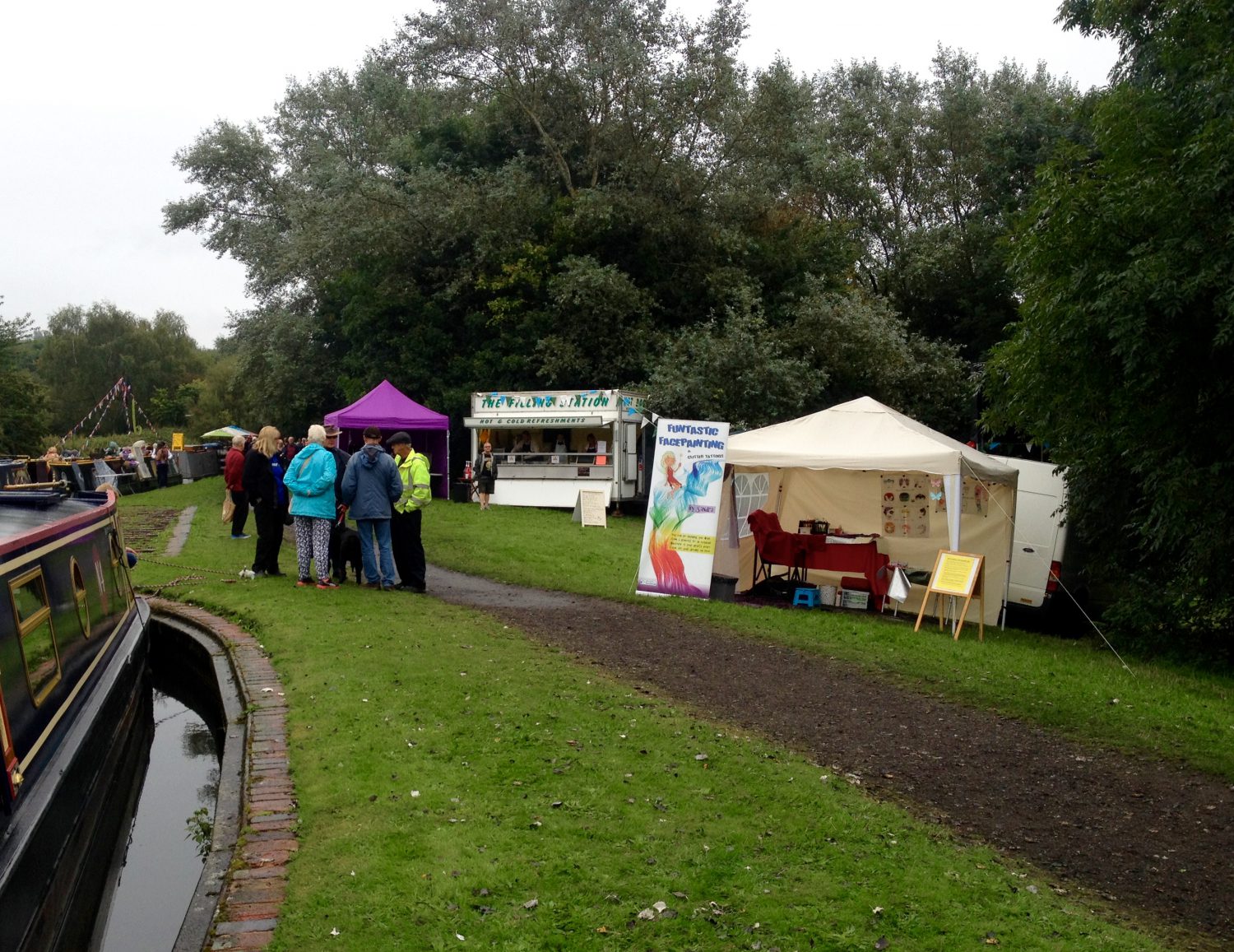 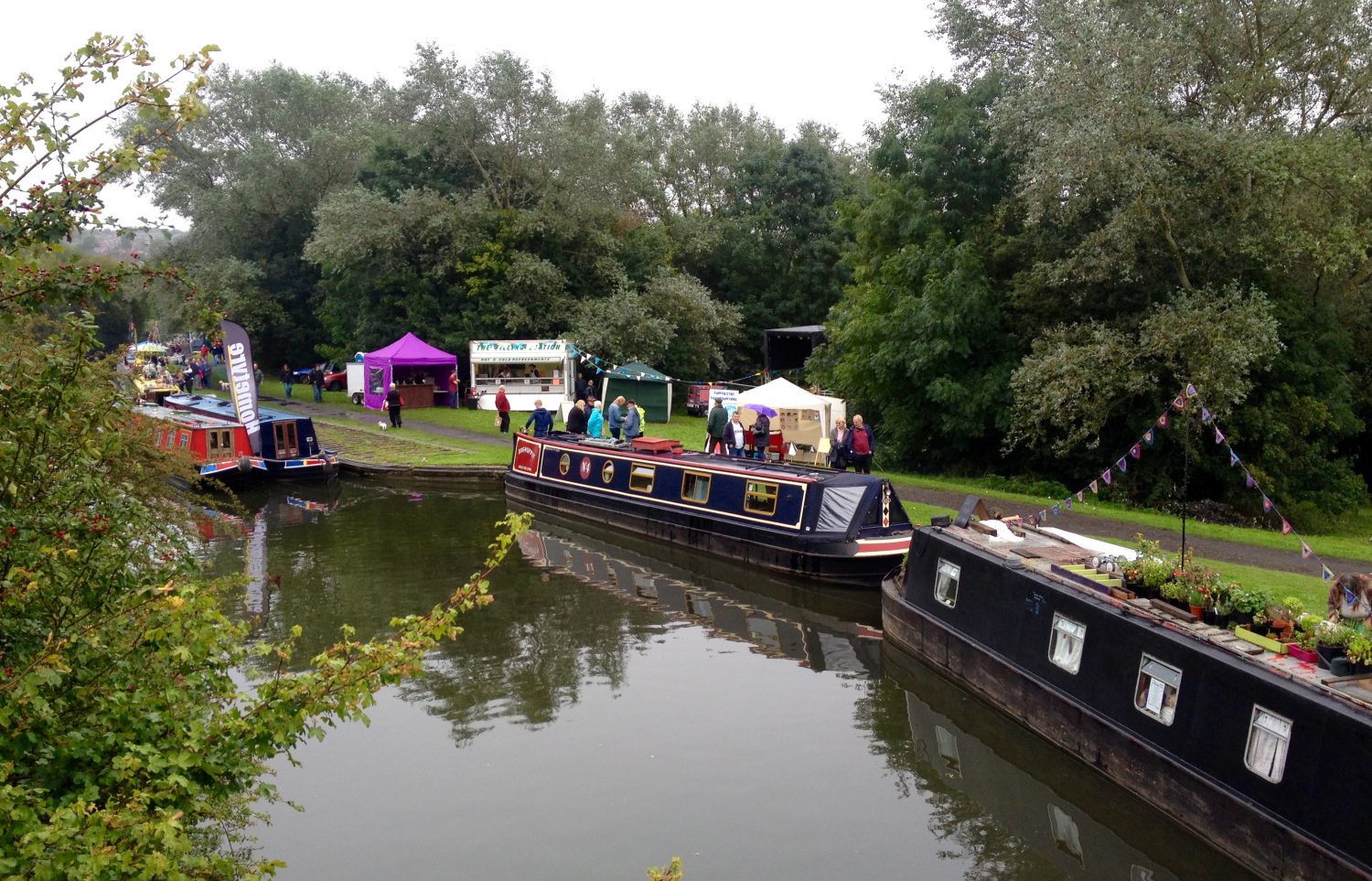 On the Dudley Number 2 arm 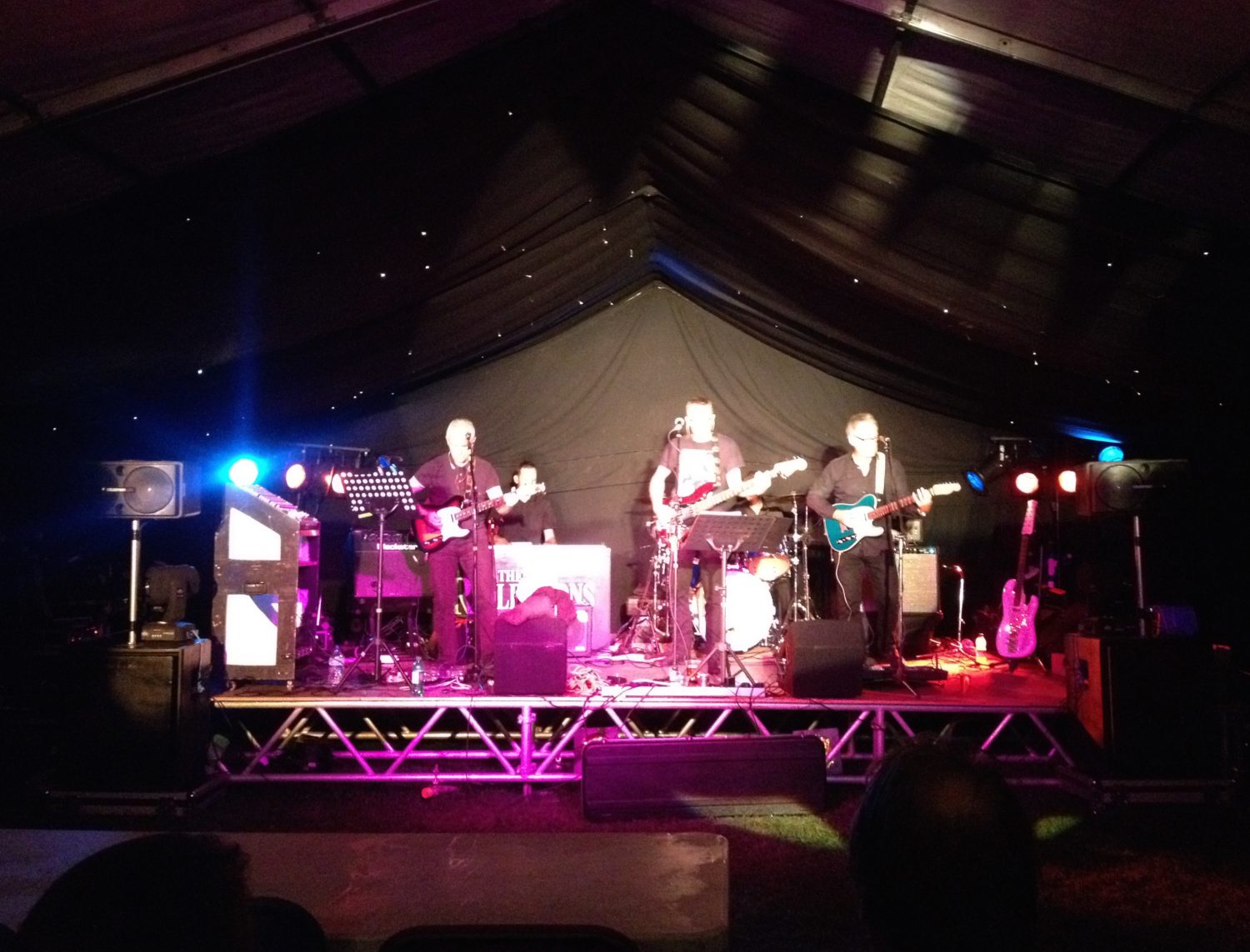 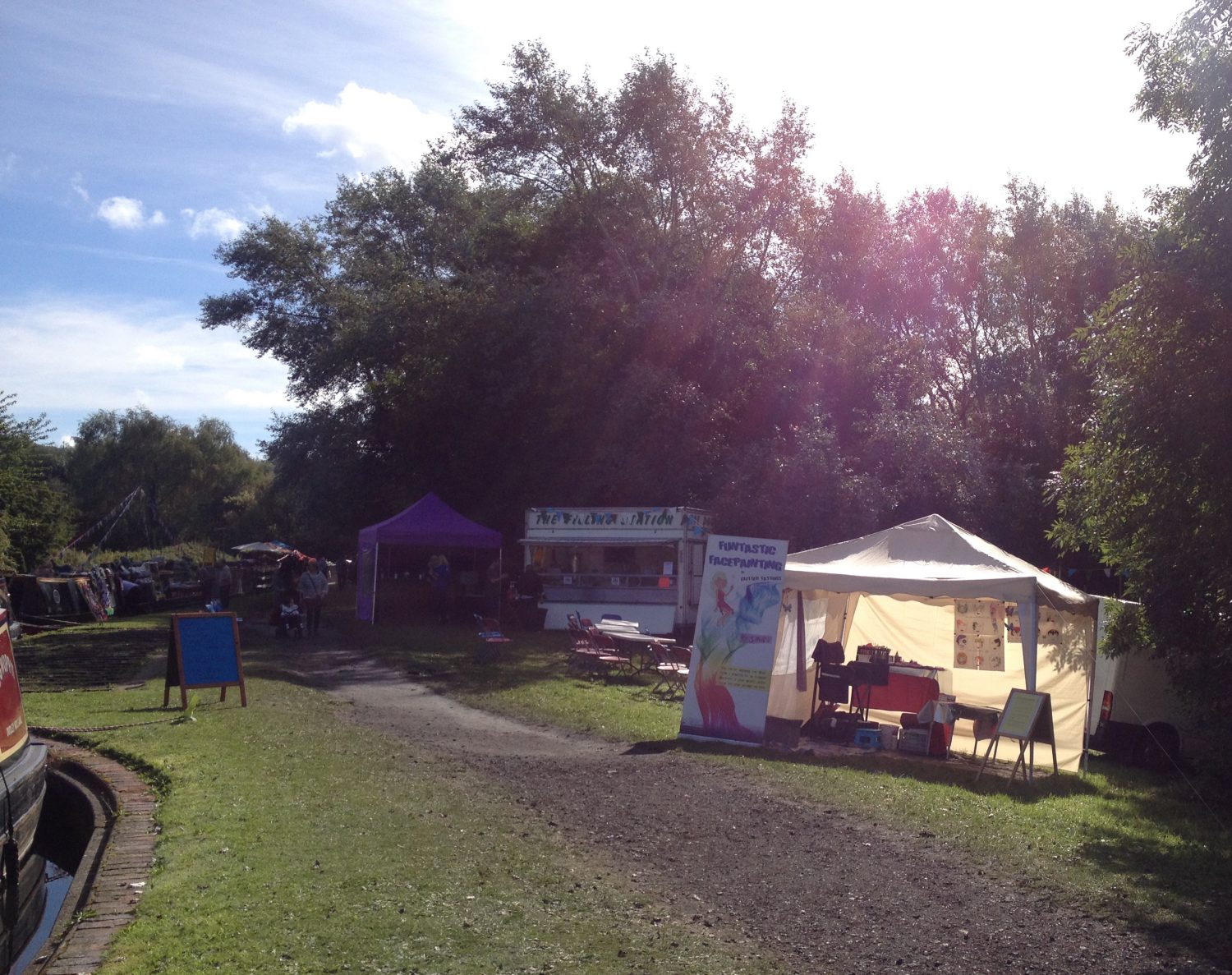 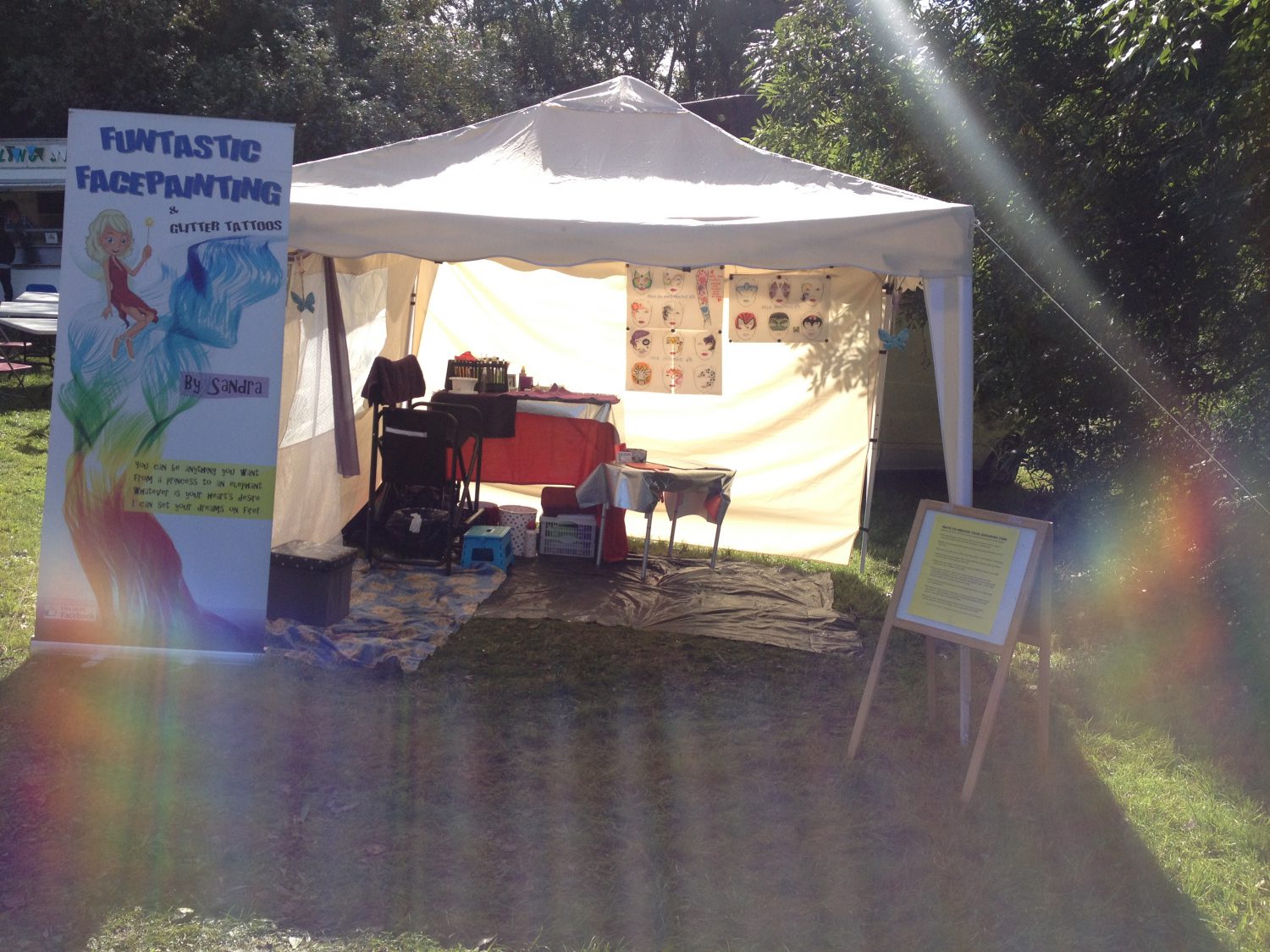 Rainbows of light over the Funtastic Facepainting gazebo

This weekend coming we’re trading at Tipton Canal Festival, and already there’s a night out being organised to Mad O’Rorke’s Pie Factory on Wednesday evening …

A return to a bit of ‘proper’ working

I found my way using public transport, to Birmingham City University last Tuesday and Thursday for the first week of my Midwifery Return to Practice Programme. Needless to say, and not unexpectedly, it was a very different world to the one I’ve been used to for three and a half years. I’ve got one day this week, and three next. I start at Worcester hospital early in October.

Barry did his induction day for his ‘job’ on Tuesday, and is all geared up to start at Merry Hill on 27th September – the day before my birthday! He’s disappointed to be missing out on socialising one night of the Parkhead Canal Festival the weekend after next, as he’s got to go and help to set up the stall.

Ah well, such is life – if it was all fun we wouldn’t appreciate it nearly as much!