Last weekend Barry and many other traders settled into the embankment at Merry Hill for a Roving Canal Traders Association Floating Market. The event began on the Friday afternoon and evening, featuring an ‘Illuminated Boats’ spectacle.

I was sad to miss the fun of the bustling days and frivolities of the evenings, though I too had a brilliant time with my eldest daughter, son-in-law, and grandsons celebrating her 40th birthday (incredible, she’s almost as old as I am!).

A fantastic photographer called Mark Cresswell took some amazing photos of the Floating Market, and he’s kindly given me permission to post them here. Do check out his Facebook page (CanalSide Art) for more incredible images. 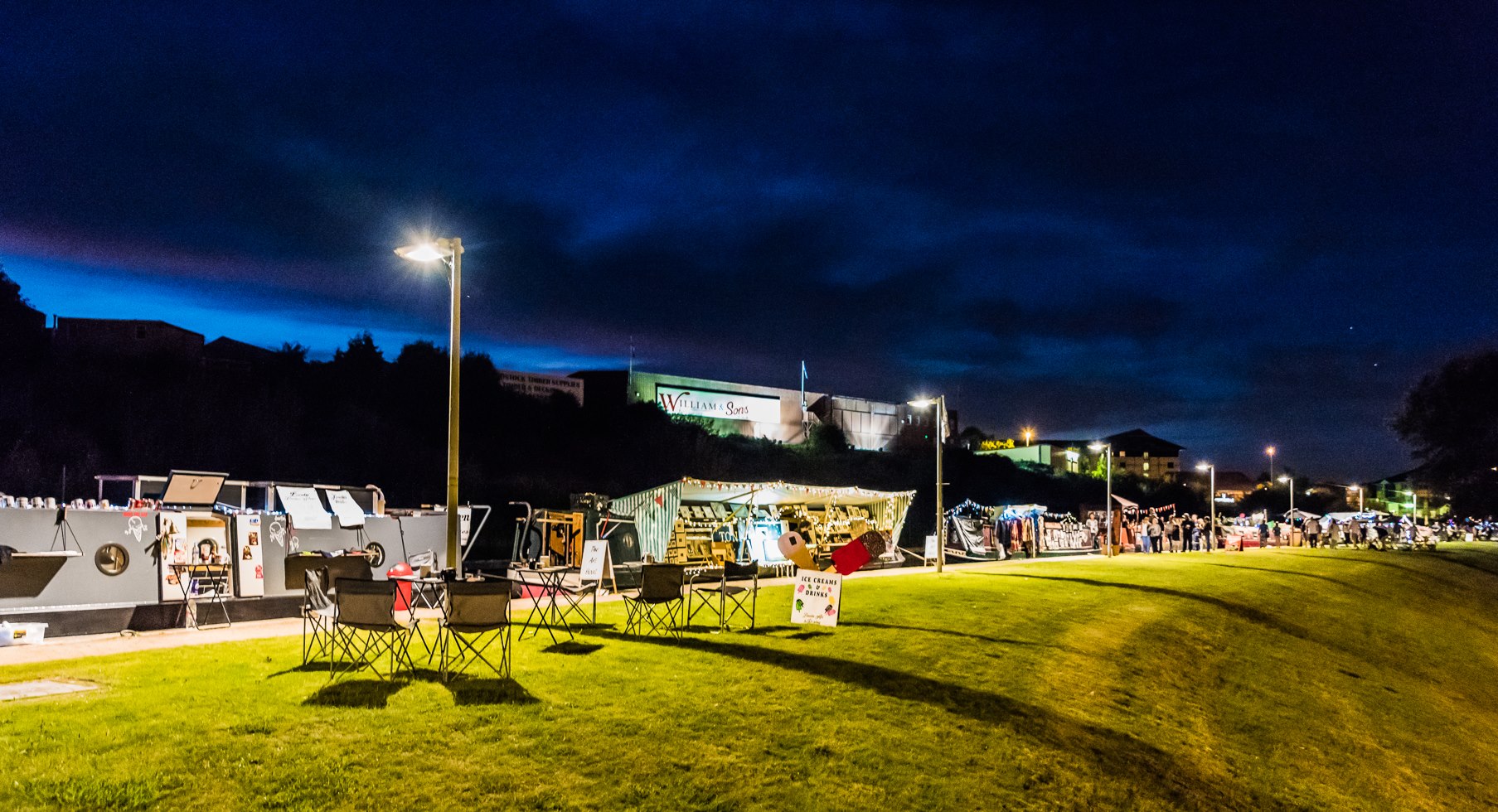 Sandra Willis, from The Doggie Boat, did a practice ‘Hot Dog’ evening on her colleagues – she’s introducing a new line especially for the winter in a tempting array of sausage treats from her boat so look out for that in the near future. 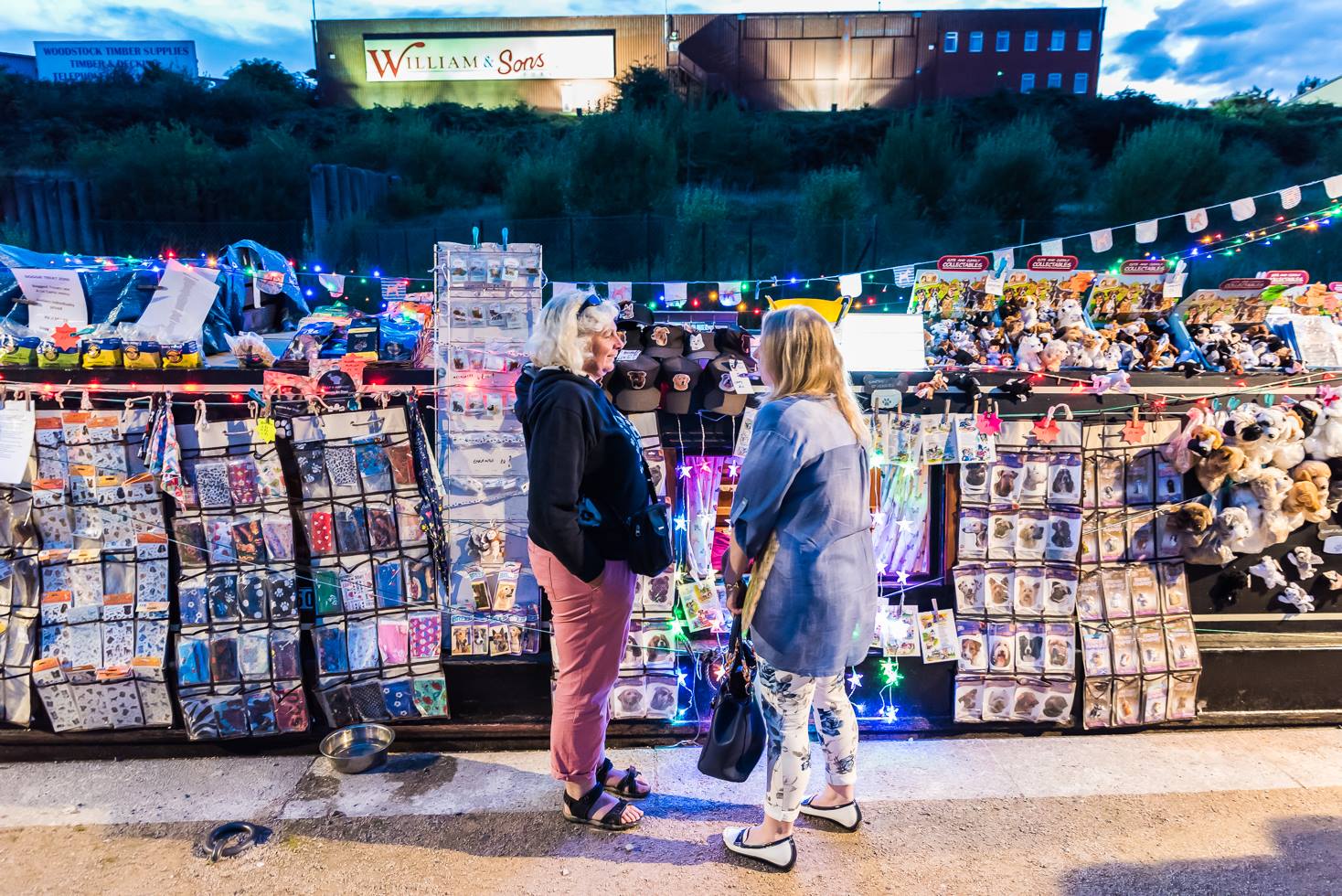 When I returned to the boat on Monday evening, all the traders were in a celebratory mood and reported they’d had a wonderful weekend and that the people of Merry Hill and surrounding areas had been extremely friendly and loved the market.

We’ve just heard today that Barry’s second round of his five-year UK Spousal Sponsored Visa application, has been approved. We can’t begin to describe what a relief it is, after so much evidence gathering to tick all the required boxes. We can now relax for about eighteen months before we start working on the final stage – being mindful during that time to continue to collate anything that proves our commitment to each other and our intention of living in the UK for the foreseeable future.

What a journey this is proving to be! In so many ways. I can categorically state that if anyone is considering a ‘marriage of convenience’ to get a spouse into the UK, to forget it. My advice would be that you need to be completely committed to each other to ride the ups and downs of this mammoth path – which I guess is the reason the government introduced this ruling.

We’d like to extend wholehearted gratitude to everyone who’s supported us on this chapter in our lives – most especially our solicitor Andre Minnaar, who initially found our story a challenge due to the unusualness of our chosen lifestyle. He’s kept his mind open and found ways to support us to satisfy the very strict requirements and evidence that must be submitted to show we a/ have the funds to support our application and evidence to prove where they’ve legitimately come from, and b/ that our marriage/relationship is one based on a commitment to each other for life, flourishing, and legally binding.

To our families and friends in UK and NZ (and blog readers near and far) who’ve also been eagerly awaiting this news, and believed in us, thank you so much.

We’ll be arriving in Stourport later today ready for the next Floating Market this weekend. The following weekend is the Black Country Boating Festival, then Tipton Canal Festival, and finally Parkhead Canal Festival.

I’m heading to mum’s tomorrow morning, as I’ve got a meeting at Worcester Royal to arrange the mentorship for my clinical practice component of my Return to Midwifery program throughout October, November and December. On Monday I begin the academic part at Birmingham City University which I’m aware will feel rather weird, but for which I’m prepared and know my mindset is open to learning and re-discovering the joys of ‘being’ a midwife.

I’ve got facepainting events throughout September, and a big one in early December, as well as a small Life Coaching caseload of awesome clients who I’ll continue to support.

Barry has a role with ‘The Calendar Club‘ working three days a week alongside a narrow boating couple who have done this job for a few years. He’ll be at Merry Hill on Wednesdays and weekends until early January – whilst continuing to run The Home Brew Boat.

Phew! It’s going to be a very full-on autumn and winter – hurrah that we’ve now got Barry’s visa we can begin to plan a much needed and well deserved holiday in New Zealand in 2017 and catch up with family and friends there.

So much to look forward to!