What a fun experience facepainting (mostly) adults at an evening wedding reception in Leamington Spa on 30th July. I’m so thankful I took the plunge to build ‘Funtastic Facepainting by Sandra‘, an artistic talent I hadn’t realised I was capable of. Barry came along as my line-manager and supporter, and of course helper to carry the necessary supplies for the job on the twenty-minute walk from canal to venue. Actually it turned into a thirty minute walk after we started in the wrong direction!

Oh the fun of self-employment without a car … 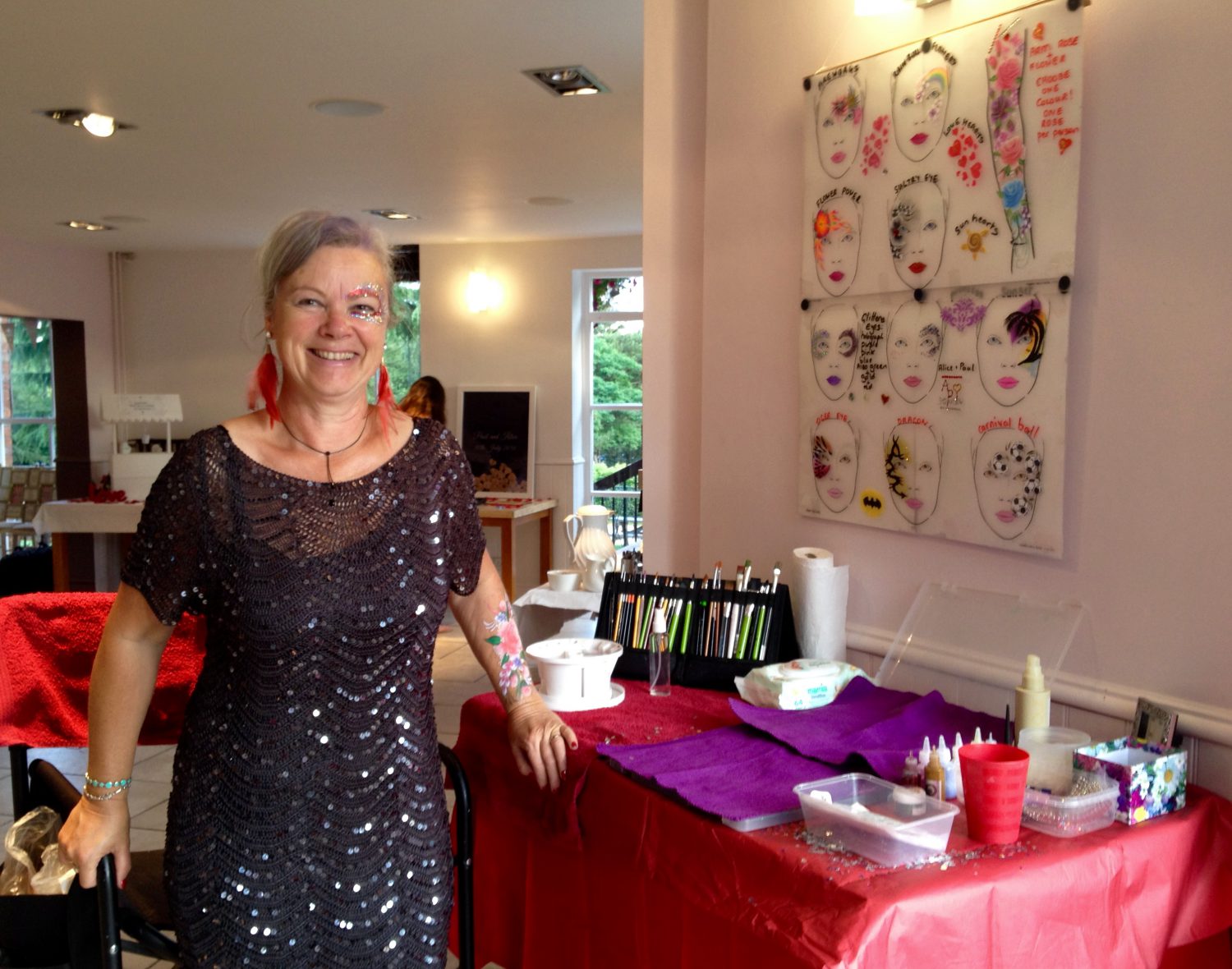 All set up and ready for the guests to sit in the magic chair!

I got a great endorsement on my Facebook page (not that I want to encourage an expectation I’ll stay longer without recompense, at paid events, but it was difficult to leave when people were so excited about being painted. I may put in a contract clause next time …):

“We hired Funtastic face painting for our wedding and Sandra was honestly amazing. Other than being very talented, she was extremely friendly and very professional. I would recommend her to anybody! She also stayed an hour and a half longer than we agreed as the face paints were so popular. Thanks again Sandra, you were everything and more than we expected xx”

The following day, Sunday 31st July, Duncan and Diane happened to be passing by (they’re in the featured photo) so we snatched a quick catch-up – they’re on their way ‘down south’ in their colourful boat, playing music spontaneously in places as they travel. Such a beautiful couple we’ve been fortunate to spend time with at the FAB Middlewich festivals.

We also strolled into Leamington and enjoyed a splendid hour or two promenading (as you do) in Jephson Gardens and sitting joyfully listening to a Brass Band. It evoked happy memories of similar times at the rose garden by the river, in Gisborne, on summer Friday evenings. 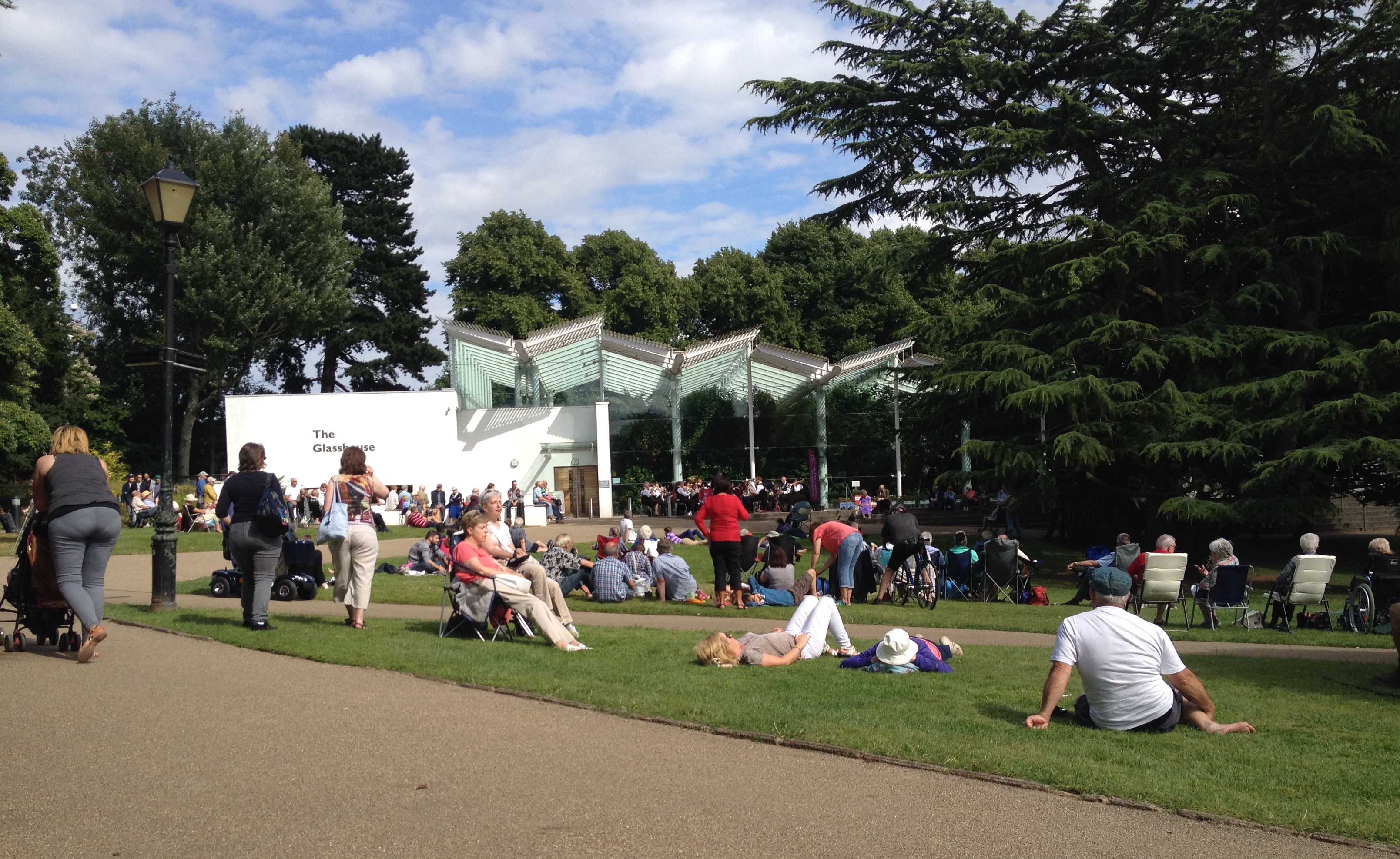 Following all that fun, it was once again time for me to abandon Barry to solo boating while I hopped on a few trains to see our grandsons for four days, then to mum for a couple. I’ve rather taken to the term the ‘sandwich generation’ – those of us who are spending time caring for grandchildren AND elderly parent/s.

I love having the freedom and flexibility at 56 years old to be with my precious family – though the balance of that and our need to earn a sustainable living sometimes drains my energy tanks. Returning to the boat on Monday evening however I was spent – and also succumbed to a nasty sinus virus from the boys which curtailed a couple of coaching commitments …

I don’t always manage to keep the scales steady.

My younger daughter has now been in Uganda for almost two weeks and has experienced highs and lows – an amazing journey for her, with so much to come. I’m hoping to visit her at some stage if I can fit it in!

Barry, on the other hand, rarely leaves the boat! I’m sure he’d love to pop and see his amazing daughter and son in NZ frequently – if only they’d invent a ‘Beam me up Scotty‘ device, I’m certain he’d be first in the queue.

Continuing the journey to our next festival, he made his way from Leamington to Braunston, where he traded over the weekend. Barry spotted this interesting phenomenon frequently witnessed on the canals on hire boats – sort of looks like fun, though also feels a little scary! Maybe it’s best not to think about it too much, The Darwin Awards come to mind on seeing such sights … 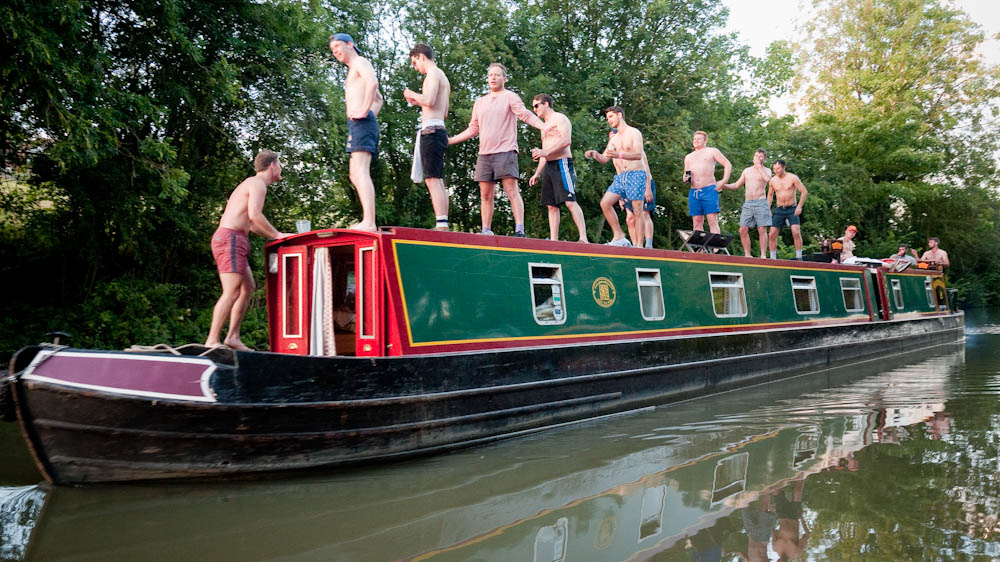 On Monday I met up with Barry at Birmingham New Street. He’d actually left the boat, and caught a bus and a train for change! All to get his ‘Biometrics‘ done at the Post Office there – basically fingerprints and a photo of his face. I needed to get documents verified for the Disclosure and Barring Service (Police Check in NZ terms) for my Return to Midwifery Practice.

So much bureaucracy surrounds all this ‘official’ stuff, it can feel rather suffocating after living life on ‘the cut’. We’re aiming to keep it all in perspective …

No other news on the visa front. It’s been five weeks now since the application was sent, and we were informed to expect it to take around eight weeks. Hopefully we’ll hear positive news before the end of August!

We really enjoyed our time at Blisworth Canal Festival in 2015, even though we didn’t arrive until the Friday afternoon. We’ll still get there later than many of our fellow traders this year, but if all goes to plan (I’m writing this while Barry’s waiting for a Home Brew Boat order to arrive at the top of the Bosley Lock Flight), we’ll get there this evening.

I’ll be facepainting at the festival in the field, while Barry trades on the towpath. And there’ll be music and dancing in the evenings, with lots of laughter as we reconnect with special friends.

I’d best boost my energy levels by any means I can, ready for a busy weekend!