I caught up with Barry and the boat in Birmingham last Monday, after an emotional weekend in Brighton saying ‘farewell for now’ to my beautiful, brave younger daughter.

I’ll miss her loads, and my mini-breaks to the seaside. It reminds me of the spirit of Gisborne, though the beaches are a complete contrast. Gisborne’s are embraced by soft golden sand, and are never crowded even in the height of summer. Brighton is a shingle beach and on a sunny day is filled with hoards of people grasping the gift of warmth while they can … 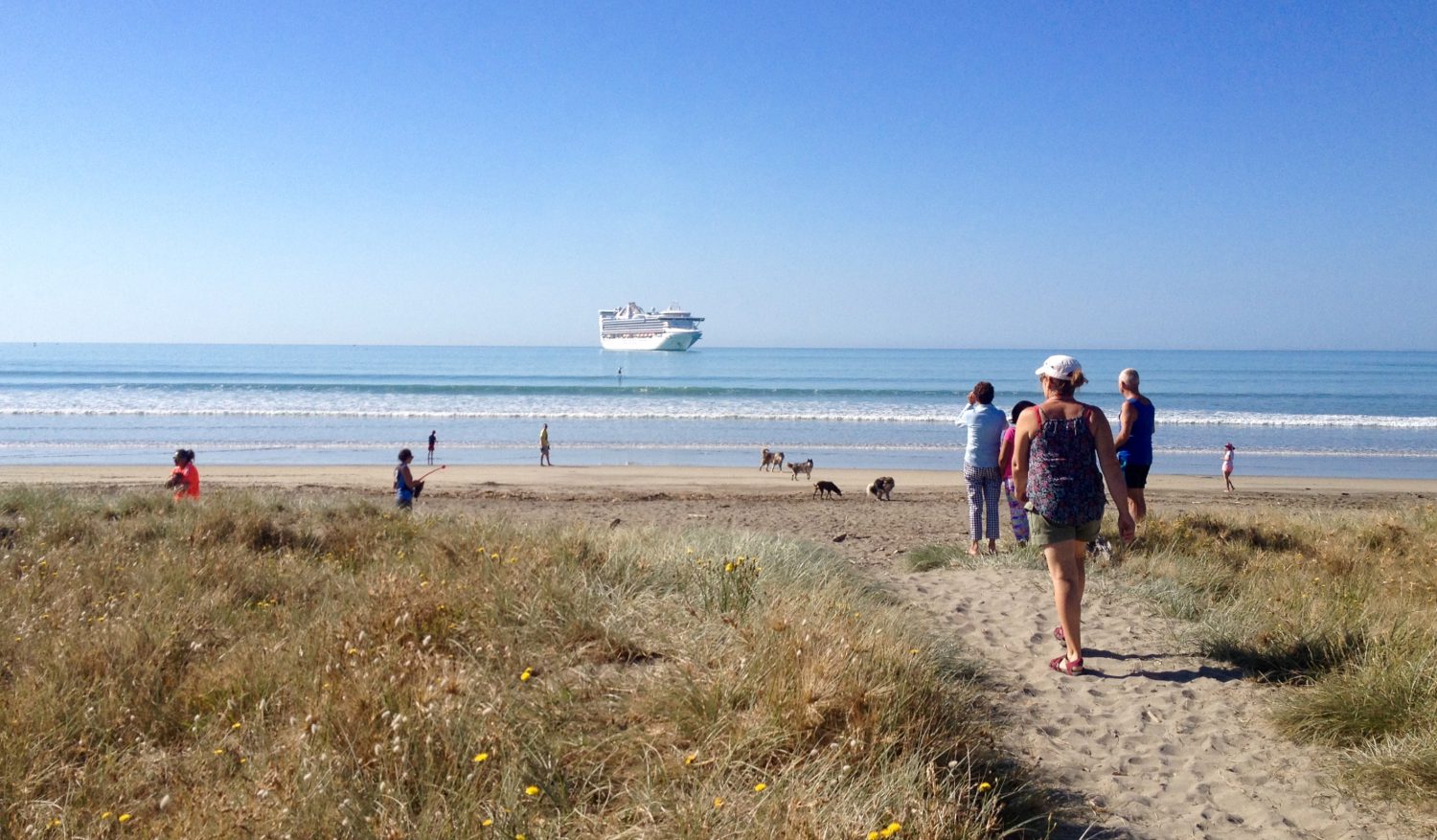 Gisborne town beach in the height of summer 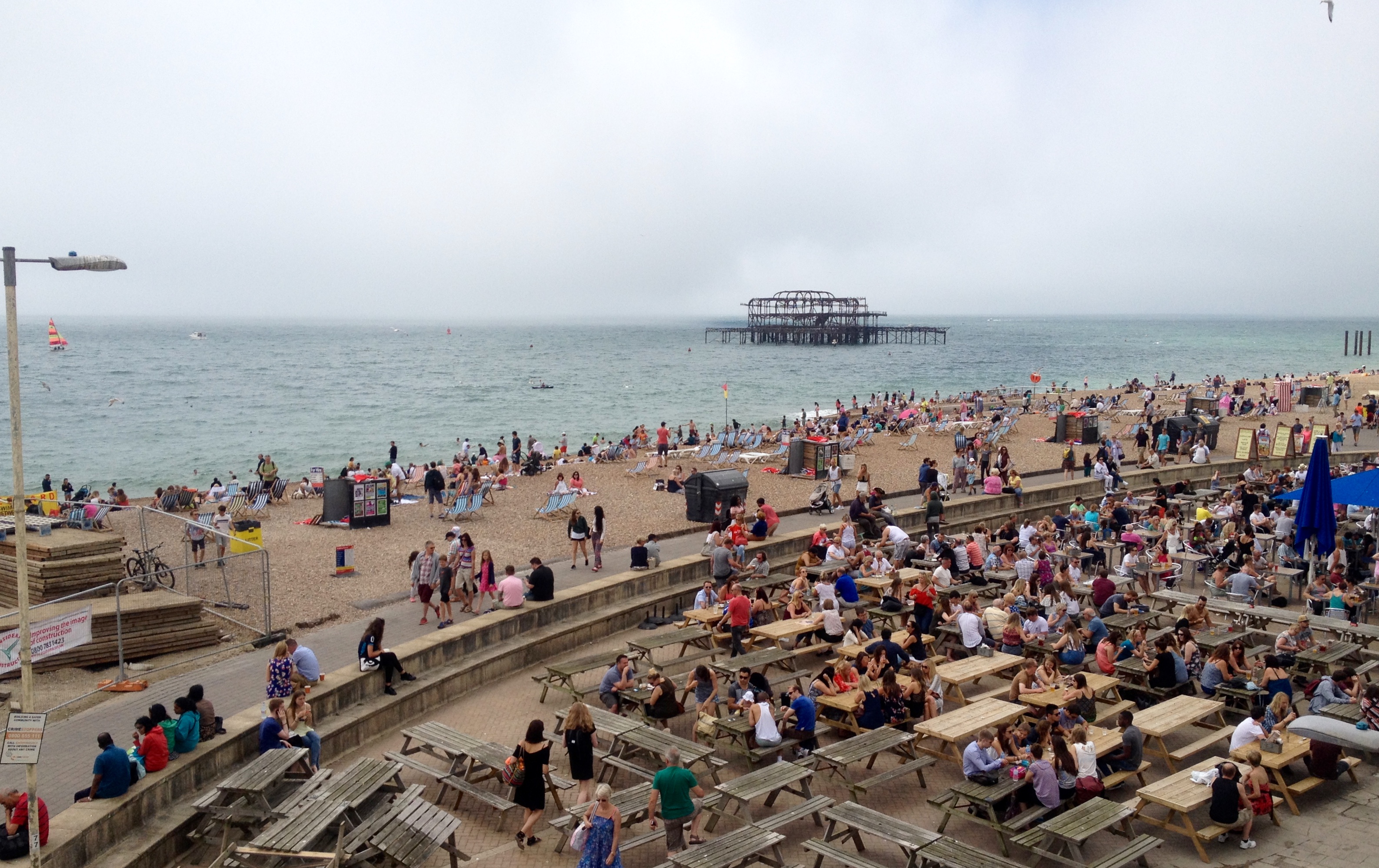 Brighton beach in the height of summer!

She’s now in Uganda, where she has the privilege of a new role setting up a Special Educational Needs Department at a large International School there.

We’ve meandered along The Grand Union Canal this week, often dodging the rain, occasionally breaking out the shorts to make the most of the slightest hint of summer warmth!

Moored briefly in Acocks Green while I walked to a nearby Aldi, Barry was handed a leaflet by a couple strolling along the towpath.

It appears that some innovative folks have produced a full coloured map called ‘Birmingham Greenways‘ detailing “150 miles of traffic free walking and cycling paths around Birmingham, the Black Country, and Solihull”.

Included within the map are 100 attractions and Heritage sights. Every canal bridge and lock is either numbered or named, and National Cycle Routes and quiet connecting roads are also shown.

I guess you all know that Sarehole Mill, in Birmingham, was the inspiration for J R R Tolkein’s Lord of the Rings? 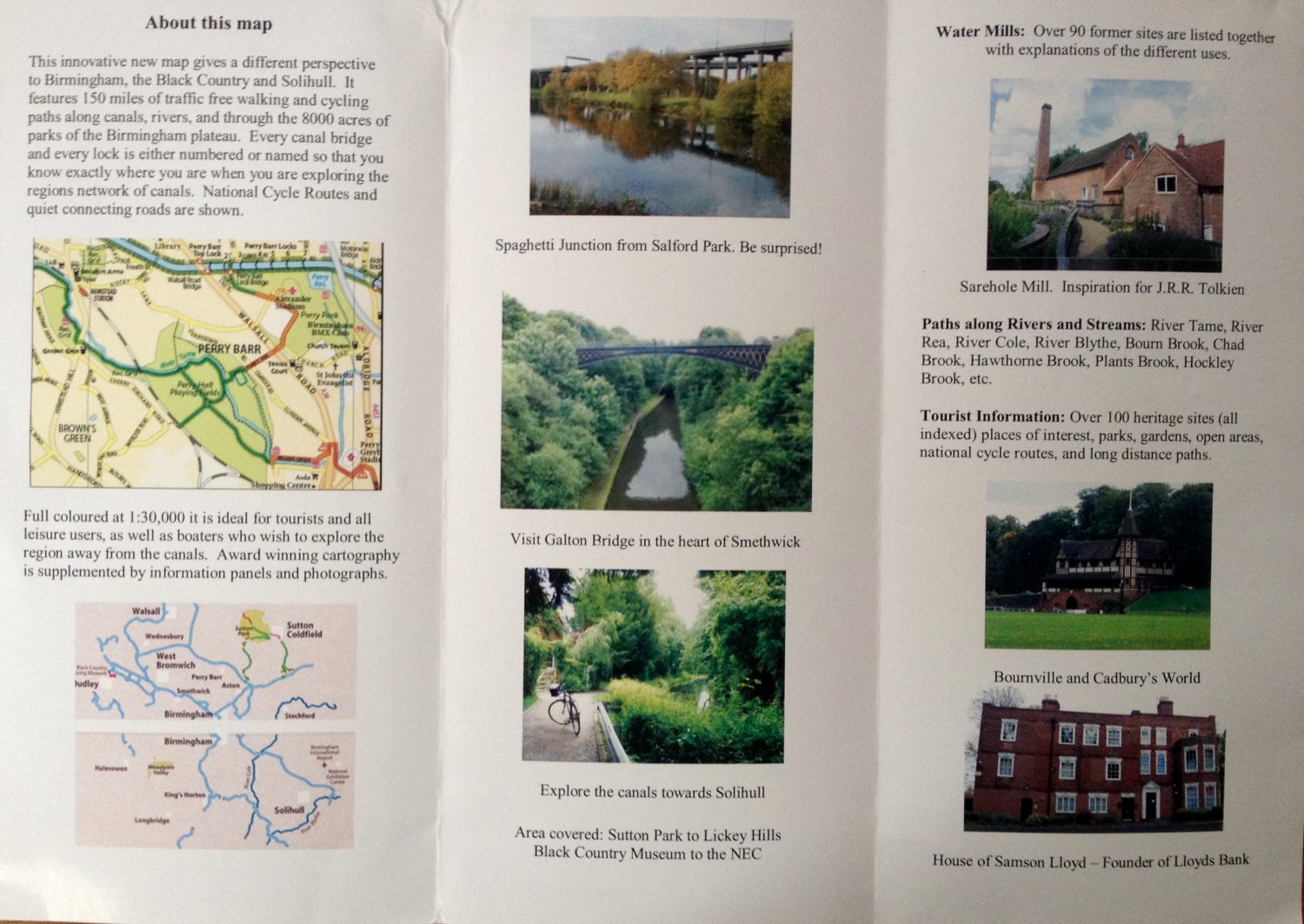 We’ll be looking out for a copy to keep on board so we can explore more of the second city that we love so much.

Our destination point by Wednesday evening was the bottom of the Hatton Lock Flight. On all previous journeys this way, we’ve been too time-pressed to stop and experience The Cape of Good Hope, a rather splendid canal-side pub o the outskirts of Warwick.

This time we were determined to do so – especially as it’s renowned for being kiwi friendly (the owners hail from NZ).

“Come down & try one of out famous Black Pudding Scotch Eggs, sip on a San Miguel or Asahi, an Old Mout Cider or share a cold bottle of New Zealand White Wine. We’re not a chain pub, we’re Freehold and real so come & enjoy some Kiwi Hospitality at its best with Steve & Emma Jury, Steve Reynolds, Ellie Leech & The Cape Crew.”

We tied up around 3.30pm, and headed into town for a few bits. To do so we walked past the establishment, and I swiftly posted our location on The Home Brew Boat Facebook page. I don’t always think to do this, fortunately this time I felt called to do so. 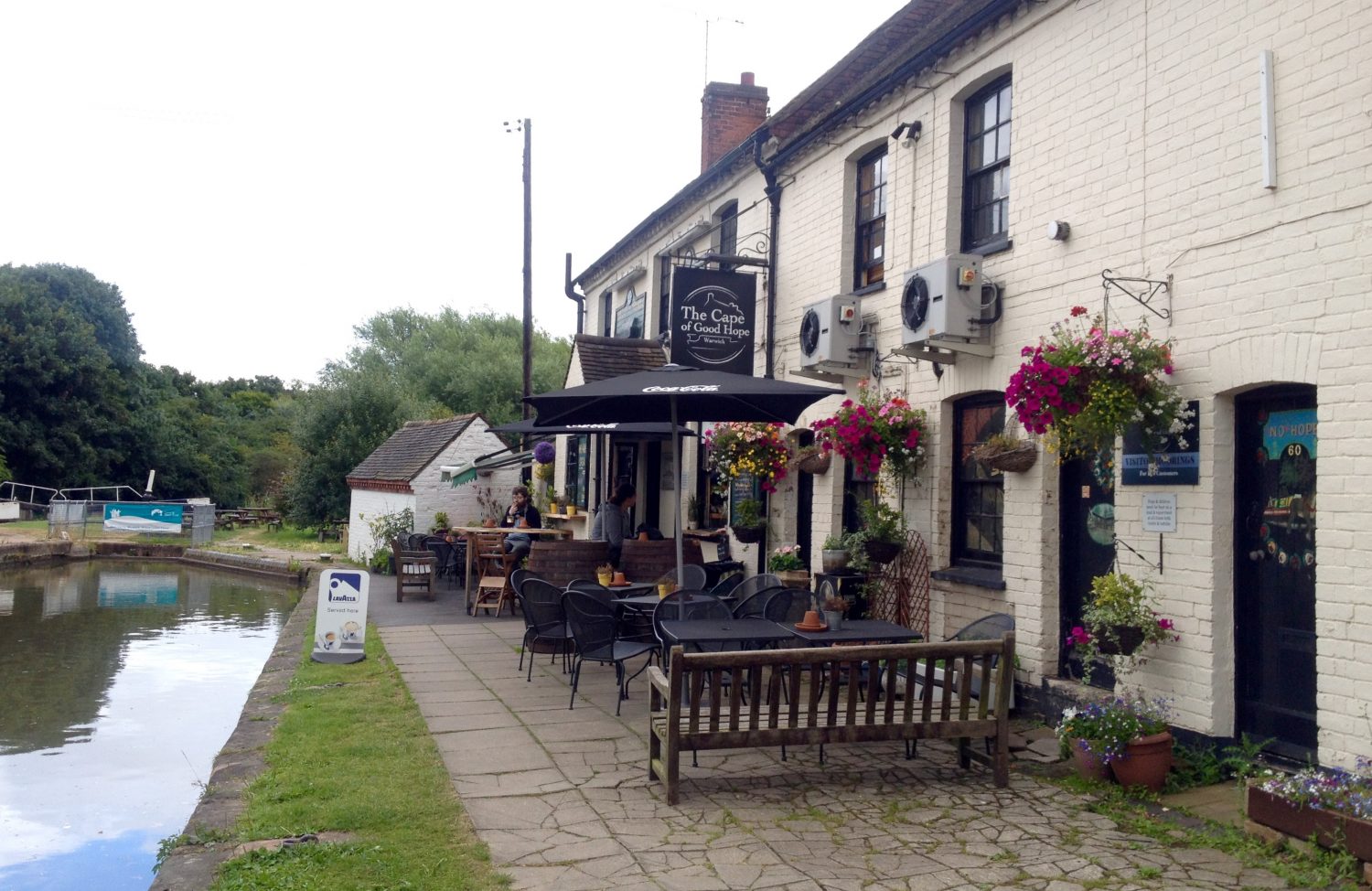 The Cape of Good Hope

Shortly afterwards there was a comment on the post from someone who seemed to know us. That’s not unusual. We do meet a lot of people on our travels, and with our ‘mature’ brains it’s not always possible to recall them all.

A further message said that someone called Heather was keen to catch up.

We had no idea who he or she were. But we were intrigued.

After dinner we headed to the pub and sitting outside were a couple who obviously recognised us – James and Heather live in Leamington Spa, and somehow James had seen the Facebook photo of The Cape of Good Hope. It turned out that Heather originates from Gisborne, and Barry had taken their wedding photos 22 years ago on Makarori Beach!

We had a delightful evening getting to know one another, or catching up as Barry and Heather were. 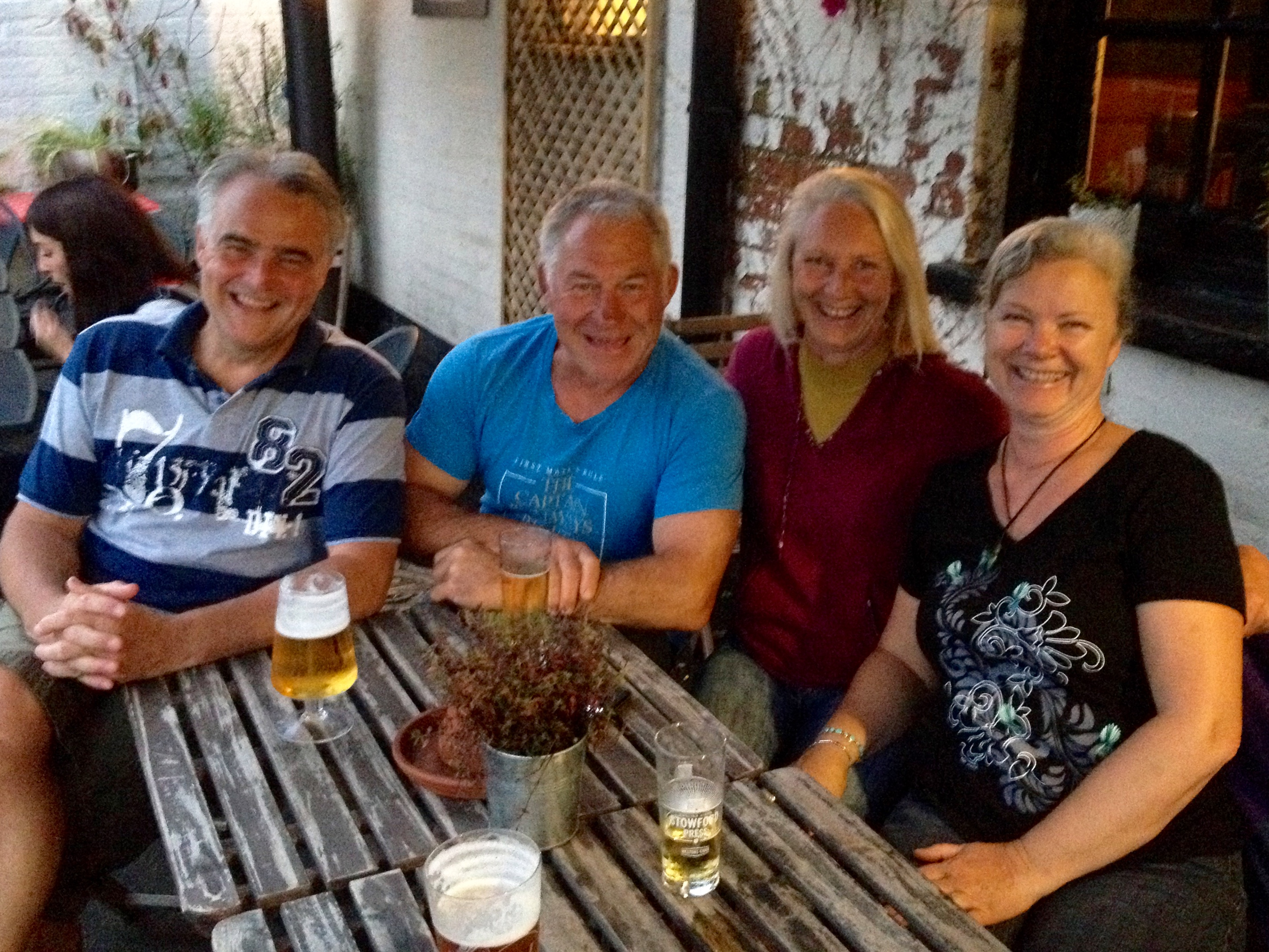 James, Barry, Heather and I at The Cape of Good Hope

On Thursday, the same Facebook post produced a comment from someone we met in 2009, on our first canal boat holiday, up in Manchester. David was on a hire boat with three friends, and we shared the Rochdale Nine locks with him and his crew. We’ve kept in touch since then, through the blog and Facebook, and met him again in Bath in 2010. We’d not caught up since. Until last night when he was driving through Leamington Spa, where we’re now moored, so we gave him a postcode to aim for, he parked up and visited for a chat a cuppa. 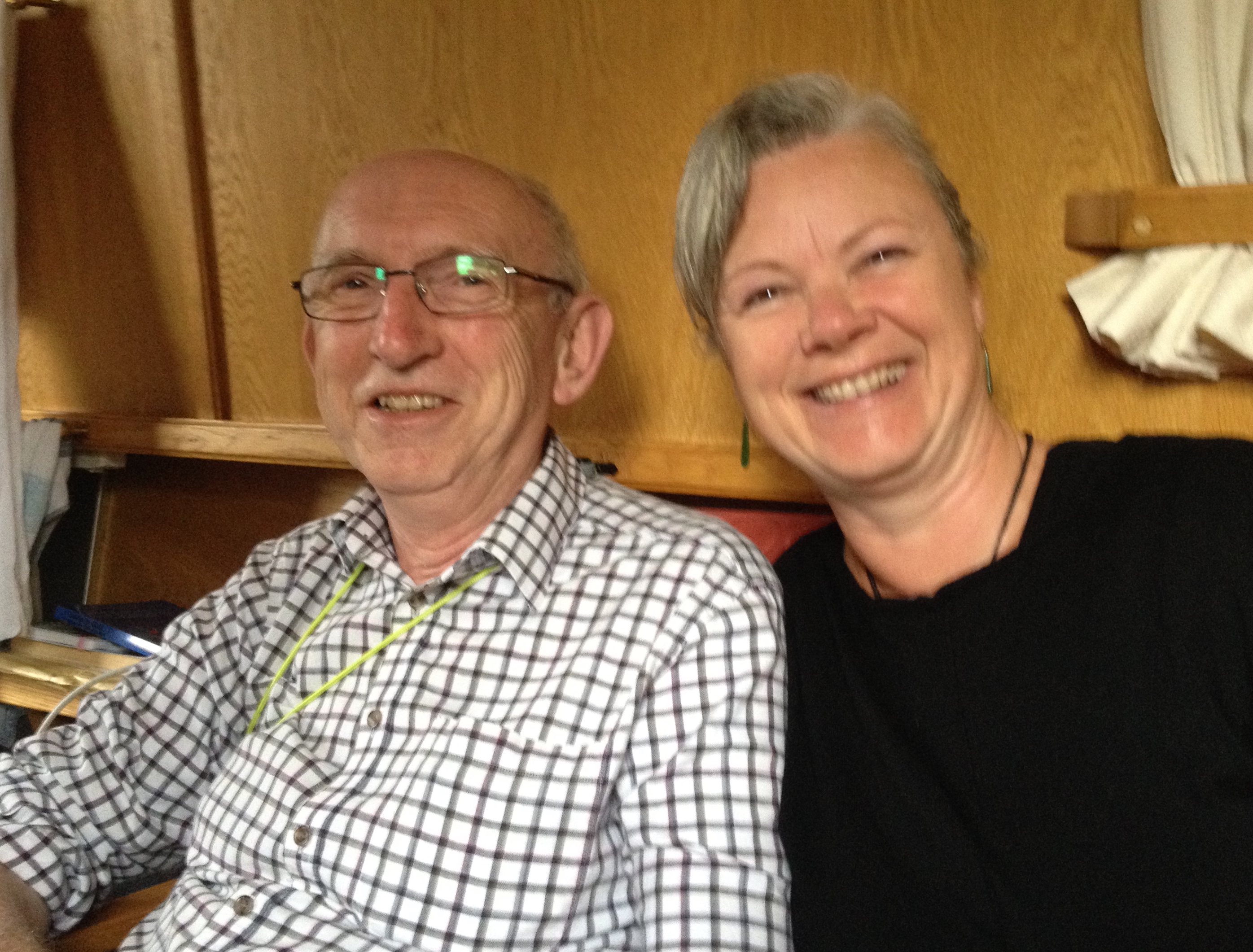 David and I on board Areandare

Fantastic to see you again David.

This evening I’m dragging Barry along to a wedding reception in Leamington Spa. He’s not keen on such events, having spent around half of his life being the professional photographer at more than he can remember. So his association is generally stressful …

This time it’s me in the professional seat – I was booked over 12 months ago to facepaint around 40 adults at an evening reception here. How FUNtastic to be brightening up big people! It’s a ‘Carnival’ theme, with all sorts of other entertainers coming too.

Next week I’m heading up to Malpas again to be with my eldest daughter and grandchildren for a few days, then back to mum’s at the weekend, returning to Areandare Tuesday 9th August.

Our next festival is Blisworth Canal Festival, on 13th & 14th August, so Barry will be travelling solo for another week – unless he gets an offer of company from anyone reading …