It’s been another full, fun and fascinating week for Barry and I living our ‘life less ordinary’.

You know the saying ‘… like ships that pass in the night“? Well that’s been us more so than our ‘normal’ recently – and is likely to continue for the foreseeable future.

Maybe that’s one of the crucial keys to maintaining a happy marriage?!

Here, there and everywhere …

Last Wednesday we did the 21 flight of locks leading up to Wolverhampton. It felt as though summer  had suddenly arrived, similar to our experience in 2015 when we ascended the flight! Mooring up at the park at the top of the flight overnight (so many people don’t stay there, they’re fearful of what ‘could’ happen, we’ve done it many times and never had a problem). On Thursday afternoon I hopped on a train to Droitwich to see mum.

Barry continued on towards his weekend destination of Aldridge, excitedly cruising along new canals for a couple of days.

On Friday morning, I drove back northwards to meet him at Pelsall, as I’m insured on mum’s car, to pick up my facepainting gear – table and chair, gazebo, banner, and suitcase full of paints, sponges, brushes, glitter, etc. I had a booking at Hadley Bowling Green Inn, a few minutes away from mum’s home in Ombersley. I face painted at their Family Fun Day last year and loved it – so was very happy to return and had a FUNtastic Saturday pitched up nestled between some interesting animals and two lovely men giving kids experiences of ‘Circus Skills’. 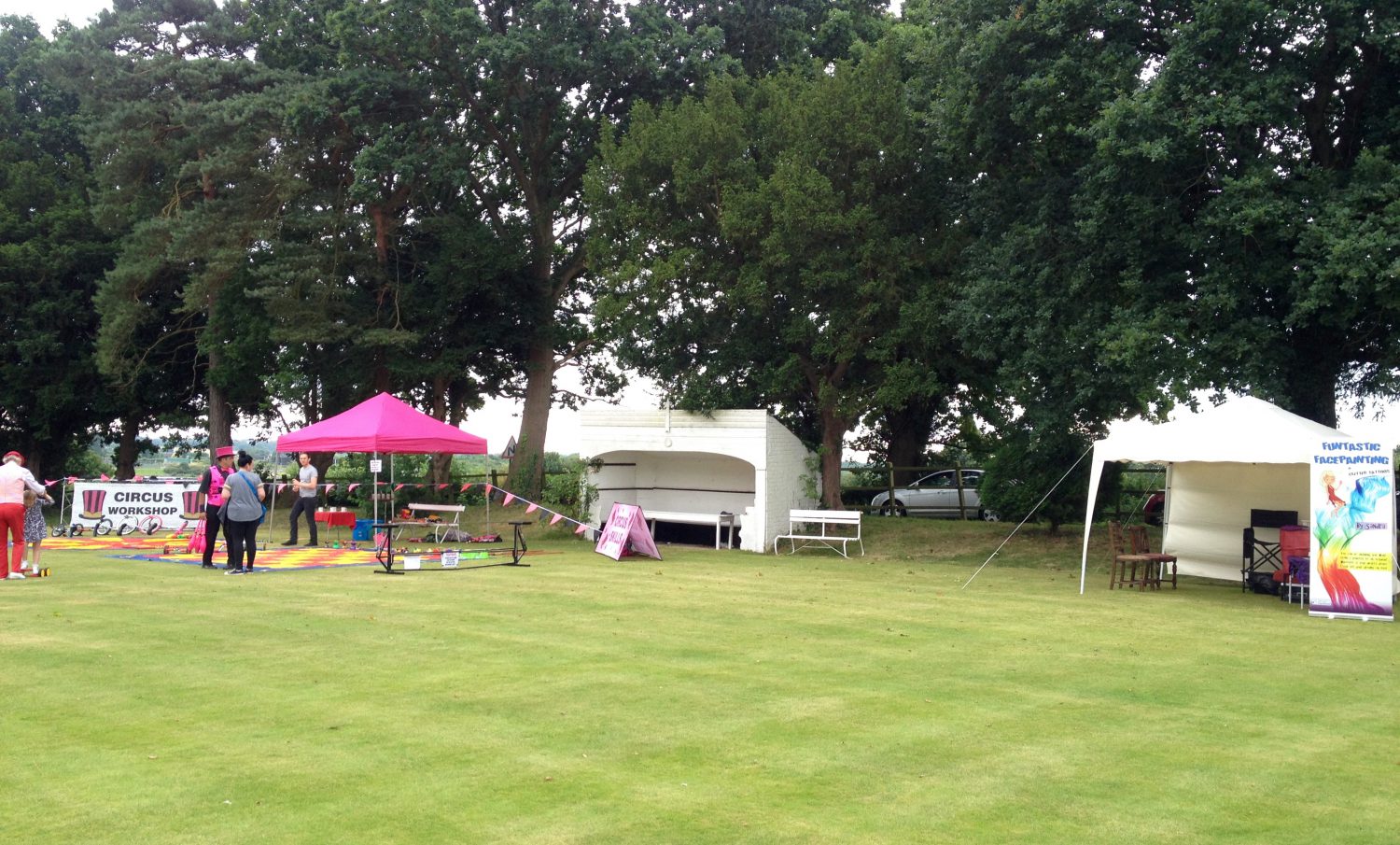 Conversely, on the same day, Andy from ‘Wild Side‘ and ‘Captain Ahab’s Watery Tales‘ fame, joined Barry for a jolly, and they journeyed along the Anglesey Arm of the  ‘Wyrley and Essington’ Canal to Chasewater Reservoir.

On Sunday they were trading together above Rushall Top Lock, taking advantage of the footfall from the final ‘Rosie’s Walk‘. An annual event, it’s been held each year since 2002, the year after a local teenager called unsurprisingly ‘Rosie, was senselessly murdured.  ‘Rosie’s Helping Hands‘ was subsequently set up by Rosie’s parents to support local youngsters following the death of their teenage daughter:

“Rosie lost her life at the age of 16 years in a motiveless and random knife attack by a complete stranger with a serious mental illness. The attack took place on Saturday May 12th 2001, at lunchtime in Birmingham’s Centenary Square.”

Andy moors his and Helen’s narrowboat (Wandr’ing Bark) and butty (The Jam Butty of course!) at Longwood Boat Club, opposite Barry’s mooring spot. Wild Side’s 2016 trading has been somewhat unexpectedly curtailed due to Helen’s current health challenges, so they’re restricted to trading locally until next year.

I drove back to the boat on Sunday with mum, to return the car-load of facepainting gear – then back to Ombersley! It’s certainly an interesting concept finding ways to make living and trading, whilst living on a narrowboat, sustainable.

On Monday (are you keeping up, it’s a little complex?) Barry was scooped up by a friend and transported to Kinver. We’d caught up with Marina a couple of months ago, in Birmingham, and she’d told us of her predicament. Her 41 foot long ‘Sea Otter’, central drive, narrowboat, had been in a mooring in Kinver for a while, and she wanted it to move Fradley.

So this week that’s what he’s been doing …

On Tuesday, I travelled by train from Droitwich to Five Ways in Birmingham to attend a planned interview for a ‘Return to Midwifery Practice Programme‘. I’ve purposely kept this very quiet up until now …

It’s something I’ve been investigating and organising for a few months. After letting go of my Nursing and Midwifery Council registration in March 2013, I wasn’t expecting to be seeking to re-gain it. There’s many legitimate and logical reasons for doing so, which I shan’t detail here.

From 2002 to late 2004, I worked in a couple of senior midwifery management roles which focussed a great deal on streamlining the return journey for midwives – I wouldn’t have imagined then I’d be taking such a journey myself. I’ve also supported many midwives to return to the register. It feels strange but exciting to be taking the steps back to practice.

To clarify however (in case you’re wondering), I’m absolutely not stopping either of my businesses. And it’s not because they’re not working well and growing. It’s also not about desperately wanting to return to paid employment and ‘giving up’ the freedom and flexibility I’m relishing from being self-employed.

For the RTP I begin on 5th September with a three week ‘block’ at Birmingham City University. I’ve got facepainting event bookings every weekend that month too. My intention is to be fit , healthy and full of energy to make sure I don’t get overwhelmed by such unusual circumstances!

The Home Brew Boat won’t be changing either, in case anyone was wondering! Admittedly Barry is also going to be doing something else during the autumn/winter months – more about that to come in a future post.

I have a clinical placement agreed at Worcester Royal Hospital, and will be completing a minimum 150 hours of supported practice to be signed off as ‘competent’ on a wide range of clinical skills.

I deliberately chose to complete my practical update at Worcester, as it means I’ll be able to stay with mum when I’m ‘working’, so she’ll get more company during the darkening days of autumn and winter to come (yes, that’s one of the reasons). 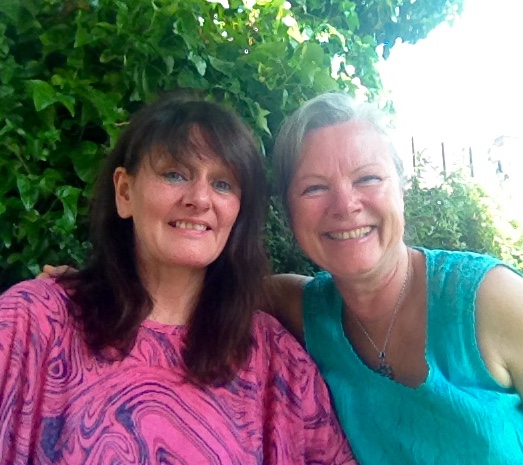 I came back to the boat on Monday evening, after catching up with my dear friend for lunch, in Sutton Coldfield. Then I jumped on the number 6 bus which took me within 50 yards of the boat. Marvellous!

On Tuesday I caught up with more lovely people – a school friend, her mum and aunty, who’s over from Australia. 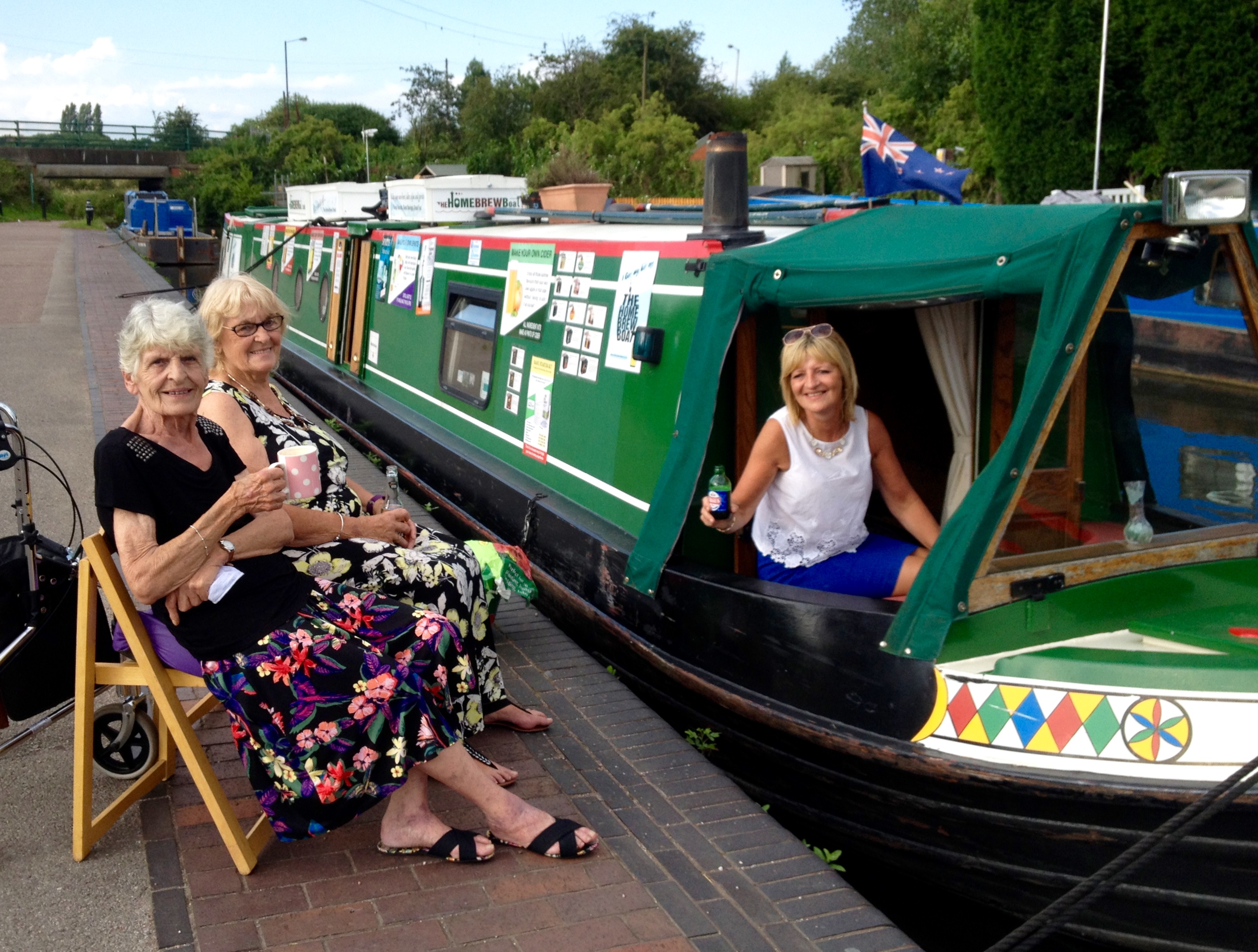 Sheila, Gill and Karen on a (rare) balmy summer evening

Today I’m leaving Barry again – he only returned to the boat last night!

I’m heading down to Brighton to say ‘farewell for now’ to my younger daughter as she’s working abroad for a while from next week.

Barry will be moving Areandare towards Leamington Spa, where I’m facepainting at a wedding reception on Saturday 30th July. I’ll re-join him next Monday.

I had the most wonderful 48 hours on the boat alone, for the first time in years (Barry rarely leaves his precious boat), and had my facepainting accoutrements spread out all over as I happily painted ‘Carnival’ designs on my boards in readiness for painting about 40 adult guests in two hours.

I realise this all sounds rather crazy to most of you reading, with so much too-ing and fro-ing. In many ways I guess it is.

One thing’s certain though, we love it, have absolutely no wish to go back to living in a house, and we’re never, ever bored!