As a Life Coach for women, I’m inspired by stories of the ways in which as a gender we’ve changed, grown, and discovered our strength and sense of purpose in the world. Which is (thankfully) no longer just getting married and having babies!

Despite the progress made, to this day it frequently feels as though life ‘on the cut’ is mostly dominated by the views of men.

I can only imagine how it would have felt for the women who heard and accepted the call to action in the Second World War. They were brave and adventurous enough to take on the role men left behind, carrying a variety cargo in working narrowboats, from London around the country.

Who were the Idle Woman?

Here’s the synopsis on Amazon which describes it far more eloquently than I could:

“This work deals graphically with the difficulties, discomforts and dangers faced by inexperienced trainee boatwomen during the “war effort” in World War II. The author was one of the women operating cargo-carrying narrow boats on the canals of the Midlands. The women sought to match the inherited skills of the working boat families. The book also reveals the pleasures of country landscapes and the satisfaction of achievement when things went well. The everyday life on “the cut” is described, working in what was predominantly a man’s world. Also described is enrolment, first impressions of the boats and crews, a bombing raid on the Regent’s Canal, loading at Regent’s Canal Dock, being frozen in, and trips to Birmingham and Oxford. The title of the text refers to the badge that trainees were awarded bearing the letters “IW” (for Inland Waterways). The wearers were dubbed “Idle Women”. This text was first published in 1947 and re-published in 1986.”

A few days ago one of our fellow narrow boating traders posted in a Facebook Group that Heather Wastie and Kate Saffin, who recently formed ‘Alarum Theatre’, were heading up the Shropshire Union Canal, performing their ‘Idle Women on the Waterways’ production.

As we were on our way down the same route, we fortuitously planned our journey to ensure we arrived at Norton Junction yesterday evening to watch them.

Delivering an incredible knowledge of what life was like for Idle Women in the war, it was thoroughly researched and showcased as a short one-woman show by Kate (Isobel’s War), and a medley of poetry and song by Heather (Idle Women and Judies).

The crowd of around 60 – their largest to date on this tour – sat huddled outside the Junction Inn (I had a blanket wrapped around my legs on the chilly ‘summer’ evening!) mesmerised by the words, props and actions. 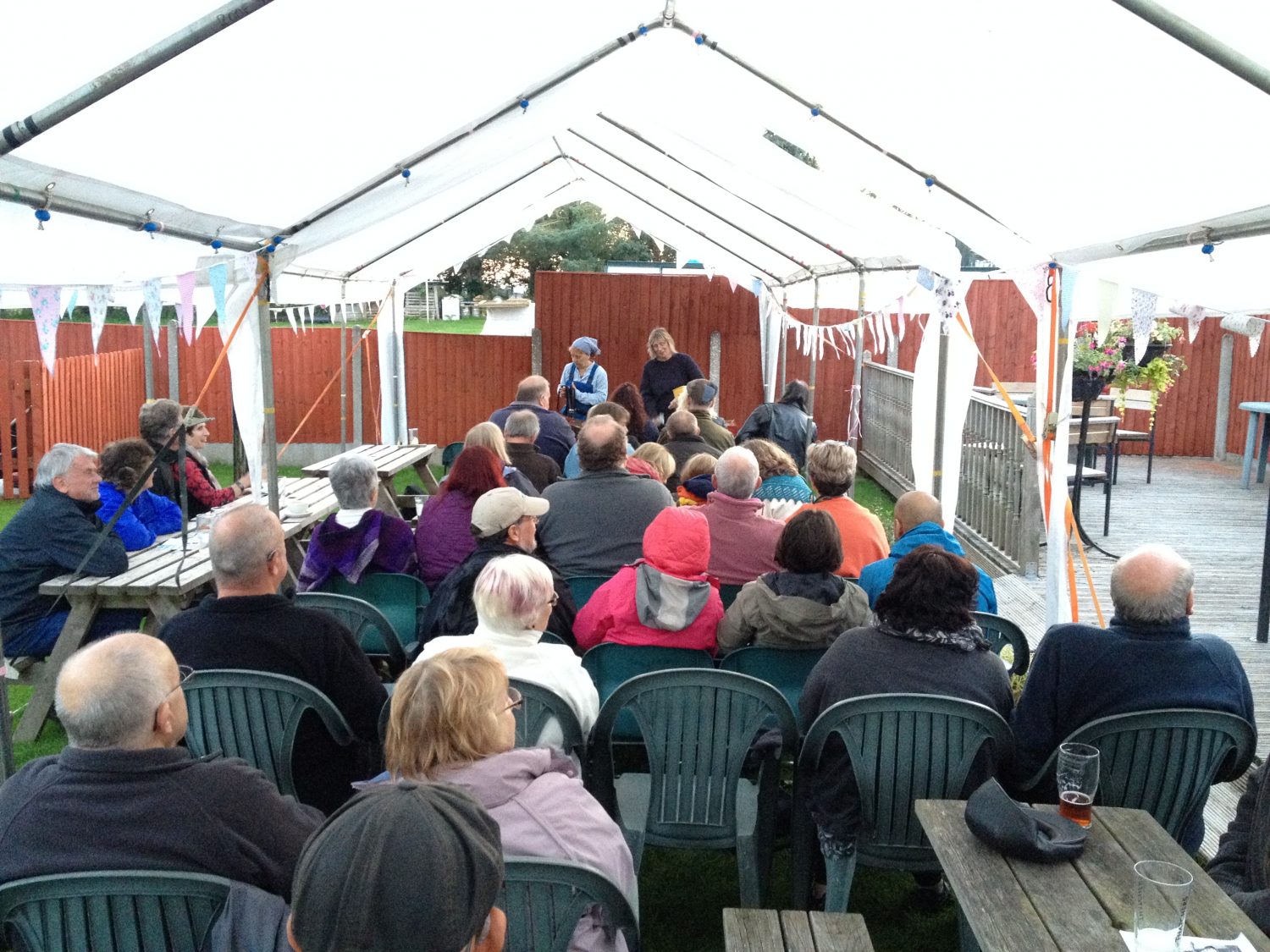 This evening they’re performing at The Anchor Inn, High Offley (which is well worth a visit anytime, especially tonight!); and on Tuesday 19th July at The Shroppie Fly.

The action begins at 7.30pm, lasts around 1hr 45mins with an interval, no tickets required, just turn up and enjoy. Donations are welcome at the end of the show.

Please note (al) = Affiliate link. This means we receive a fraction of the money from Amazon if you click the link and purchase the book 😉

One thought on “Idle Women Finding Their Feet On The Cut”