It doesn’t take a genius to recognise our living and working circumstances are a little outside the ‘norm’.

Both being self-employed, running three quite different businesses, only adds to the complexity for those in authority comparing us to the confines of their checklists.

Despite these challenges, we’re determined to persevere with our life less ordinary here in the United Kingdom …

We’ve learned to become quite inventive with the evidence collected and submitted for the second round (of three) of Barry’s UK Spousal Sponsored Visa (Five Year Route).

You’ll have gathered from previous posts how mind-boggling this process is, and understand our rationale for engaging a legal ‘expert’ in Immigration Law to guide us.

A few weeks ago I had a flash of inspiration, and came up with the bright idea of asking Richard Parry, Canal and River Trust‘s CEO, if he’d feel able to provide us with a ‘letter of recommendation’.

From one of our first ever trading festivals at Droitwich in May 2014, to the RCTA Chester Floating Market last weekend, Richard’s appeared as a stalwart supporter at almost every single event. He invariably stops and chats – mostly to Barry as I rarely get chance to look up when I’m facepainting! 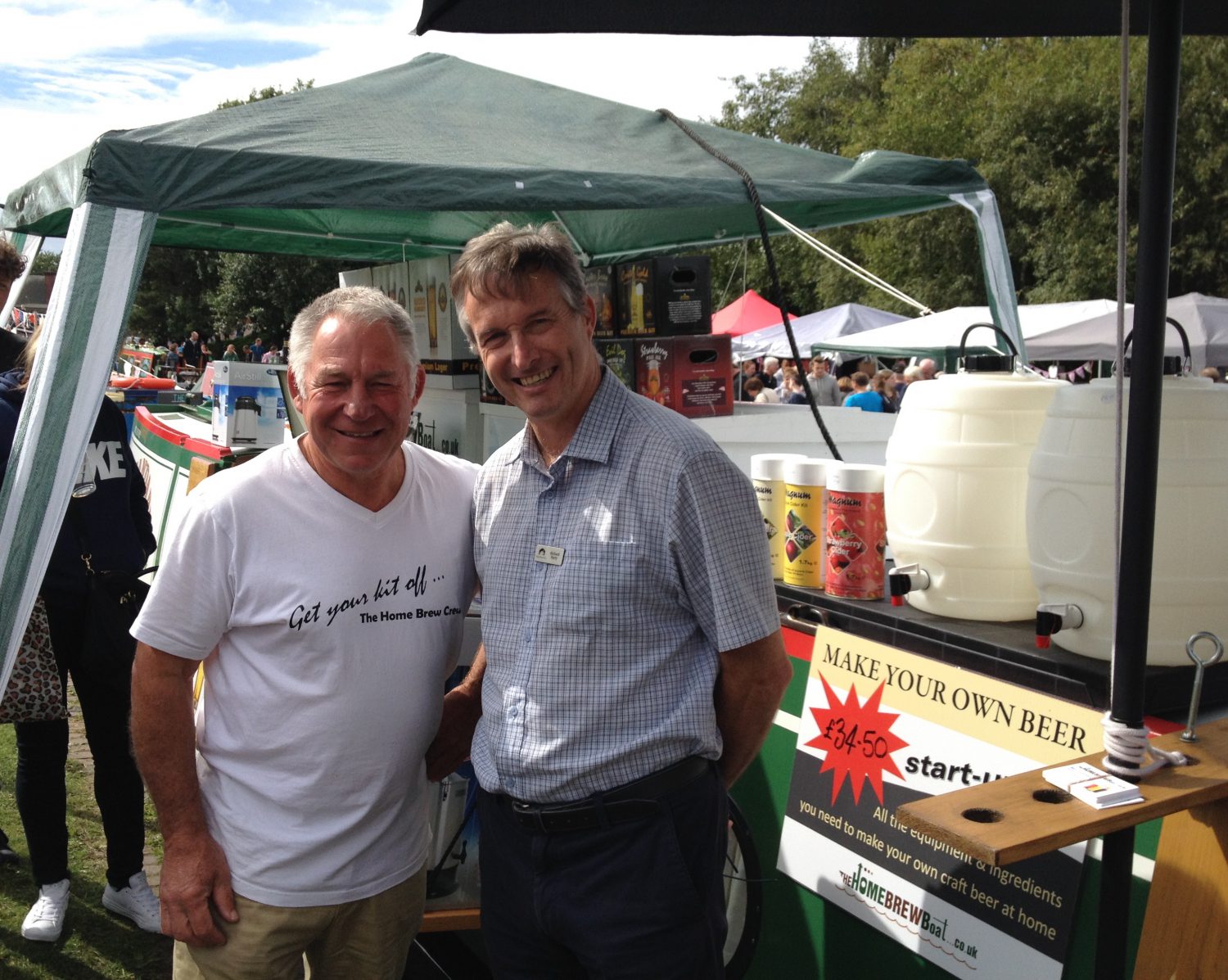 Barry and Richard at the BCBF September 2015

Sure enough, shortly after my brain-burst, Richard appeared whilst we were trading at Fazeley.

I informed him of our unsettling predicament, and quest to gather a range of evidence despite the unusualness of our circumstances. He was stunned, having not previously known our history, and was keen to support us in any way he could.

On Monday, an original signed letter of support from Richard for Barry’s visa application, confirming his knowledge about us as a couple, and how we live and work, arrived at our solicitor’s office in Birmingham.

Thank you so much Richard. We’re sure it’ll go a long way towards confirming our story to the relevant powers that be.

You won’t be surprised to learn we rarely, if ever, shy away from publicity.

There’s a multitude of reasons for this – a couple of pertinent ones are the chance of promoting our businesses, and of course a way of proving the genuineness of our chosen lifestyle.

When we recently received an email from C&RT enquiring if we’d be keen to talk to someone from ‘Yours’ magazine (‘Britain’s leading magazine for the over-50s!‘) to hear more of our ‘Humans of the Waterways‘ story from 2015, we unhesitatingly agreed.

Following a telephone interview and photo shoot, we were sent a pdf to check the accuracy of the proposed article a few weeks ago.

Yesterday, on the day we’d arranged months ago to meet our solicitor to complete the abundance of paperwork for Barry’s visa application, the national magazine with our article in was published.

It’s a short but well written piece, with a colourful image of us on board Areandare – we love it! Pam and Andy, from The Glass Barge, also appear in the two-page spread. 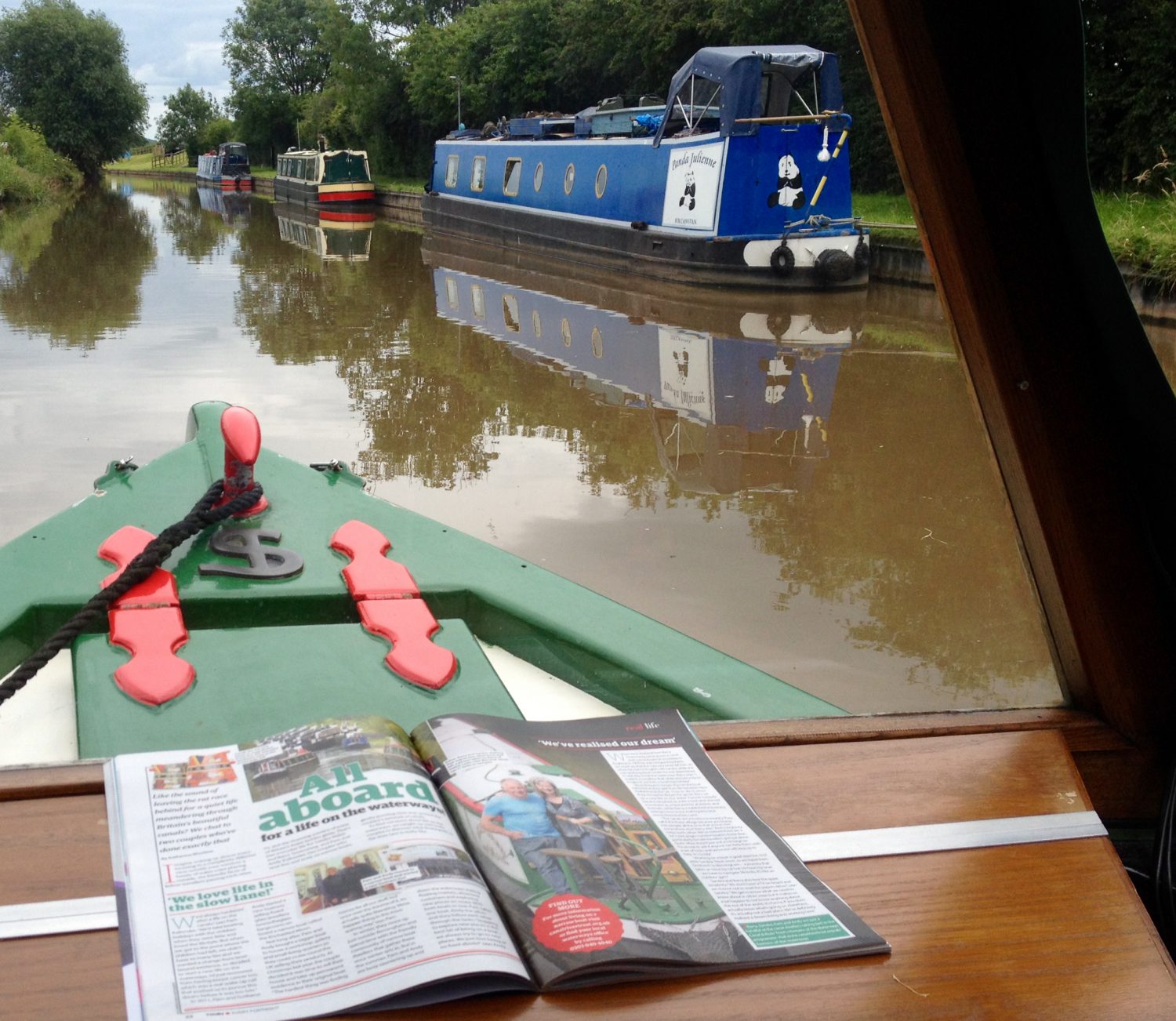 If you’re able, do get a copy of the magazine (or get someone to buy and send you one!). It’s a snip at £1.55 – we’re on page 22, in the ‘Real Life’ section,  sandwiched between a story about Sally Geeson who used was an actress in ‘Bless This House’ in the 1970s, and Ken Hom the Chinese celebrity chef. 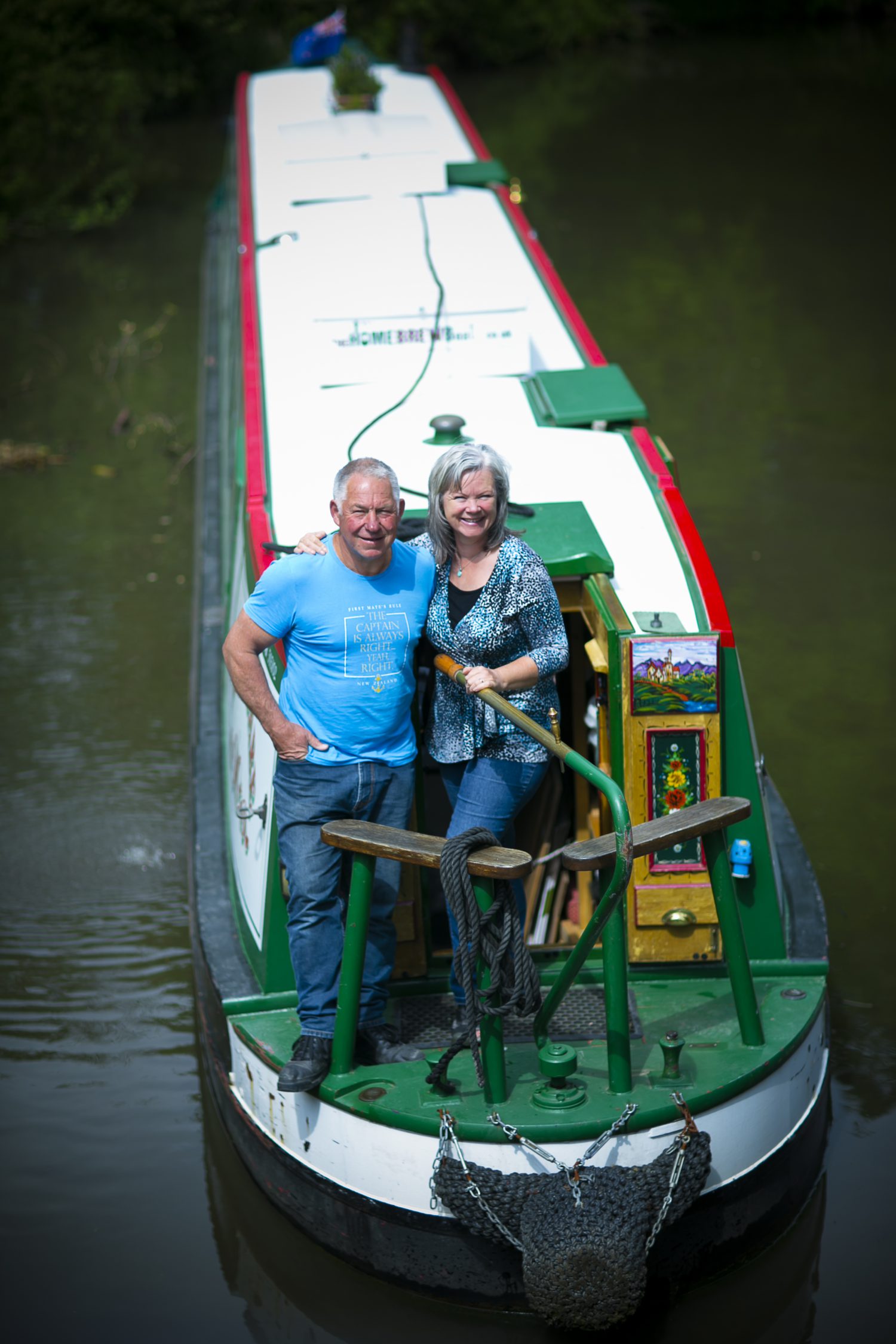 The photo used in the article, taken by the delightful and very talented Patrick Boyd of Patrick Boyd Photography

My daughter texted after she’d seen the article and said years ago, when she read magazines, she’d always imagined the people featuring in them were made up – well now we know we’re absolutely real.

What a privilege, thank you C&RT for providing such a fantastic opportunity for us. And of course we’re extremely grateful to ‘Yours’ magazine for inviting and including us in their 5th July 2016 publication.

Obviously said feature was photocopied as ‘evidence’, and has been added to the mound of papers being posted today to the UK immigration department.

Gaining understanding of the Inland waterways

The support we’ve had from the knowledgeable and friendly solicitor, Andre Minnaar, has been absolutely First Class.

There’s been a few times when he’s had to clarify information due to our fairly unique situation, but he’s up to speed now having learnt a great deal more than he previously knew about the British Inland Waterways and a couple of its occupants!

Andre is employed by Cartwright King Solicitors, and we first met him in September last year at a ‘free’ appointment at Birmingham library for immigration queries. He’s held our hands since January 2016 as we’ve navigated the process.

Whatever the outcome, we’re confident that between the three of us, we’ve done the best we can, with what we have, to get the next ‘Leave to Remain’ for Barry.

After hour upon hour of blood sweat and tears (literally, just ask Barry how horrid I’ve become at times when stressed about the time it’s taken and the stress of how we can corroborate our situation), we’ve now handed over everything for stage two of the process.

The pile of documents will be sent today (a photo of the file about four inches high would’ve been good, but I totally forgot!) – then we wait to hear.

For up to eight weeks. The wheels turn slowly.

Having travelled by the cheapest possible advance train tickets from Chester to Birmingham on Tuesday, for the solicitor’s appointment, we had four hours after the meeting until our return journey.

We made the most of the time with a visit to the Birmingham Indoor Market to find a few useful things, then spent an hour sat in The Secret Garden at the Library, followed by a treat of dinner at Pizza Express as a reward for the months of focus and relief that we’ve done as much as we possibly can – for now. 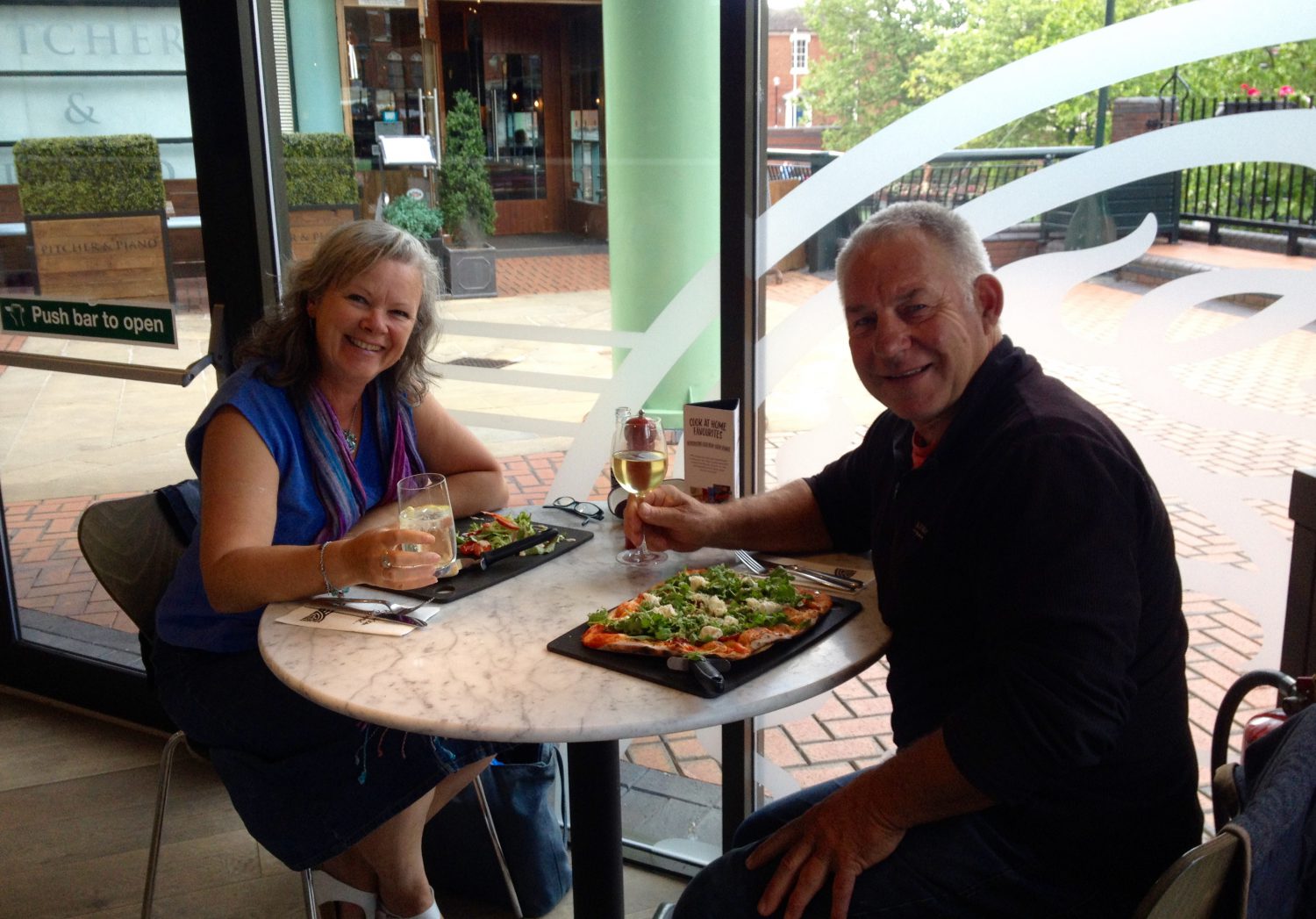 We’re pretty confident we’ll get the go-ahead for Barry to remain in UK for the foreseeable future. At least until the final round in October 2018. Then the plan is we’ll re-apply (groan!) then, and successfully attain his ‘Indefinite Leave to Remain‘ visa …