There’s something magical about the Middlewich Folk and Boat Festival that impels us to return each year. Having not booked for 2016 as we’d planned to be on the Leeds Liverpool Canal, we were relieved to sneak in on a late cancellation.

After another long journey, this time from Liverpool, we arrived late afternoon on Thursday, greeted by the lovely Heather from The Fudge Boat who met us at ‘The Big Lock’.

We’ll unashamedly admit this is one of our favourite festivals. The whole town seems to embrace the event, and we see and meet an abundance of friendly, happy people.

The line of trade boats extends from the bridge in town to the Big Lock. There was a long waiting list of traders wanting to come, such is the interest in this colourful and fun event.

Catching up with a few traders

As I wasn’t facepainting on Friday, I took Sharky McShark to meet some of the eclectic mix of floating traders … 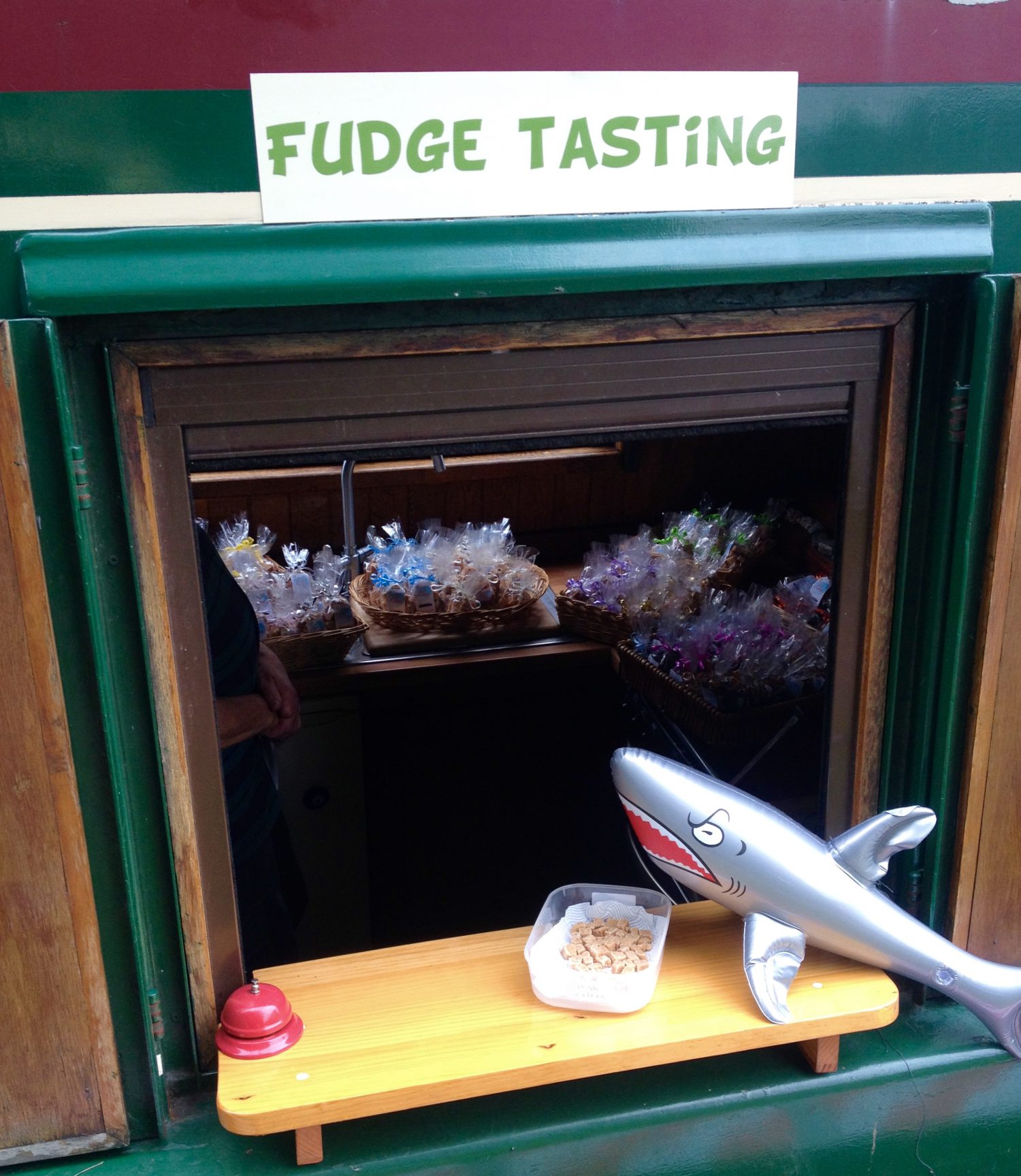 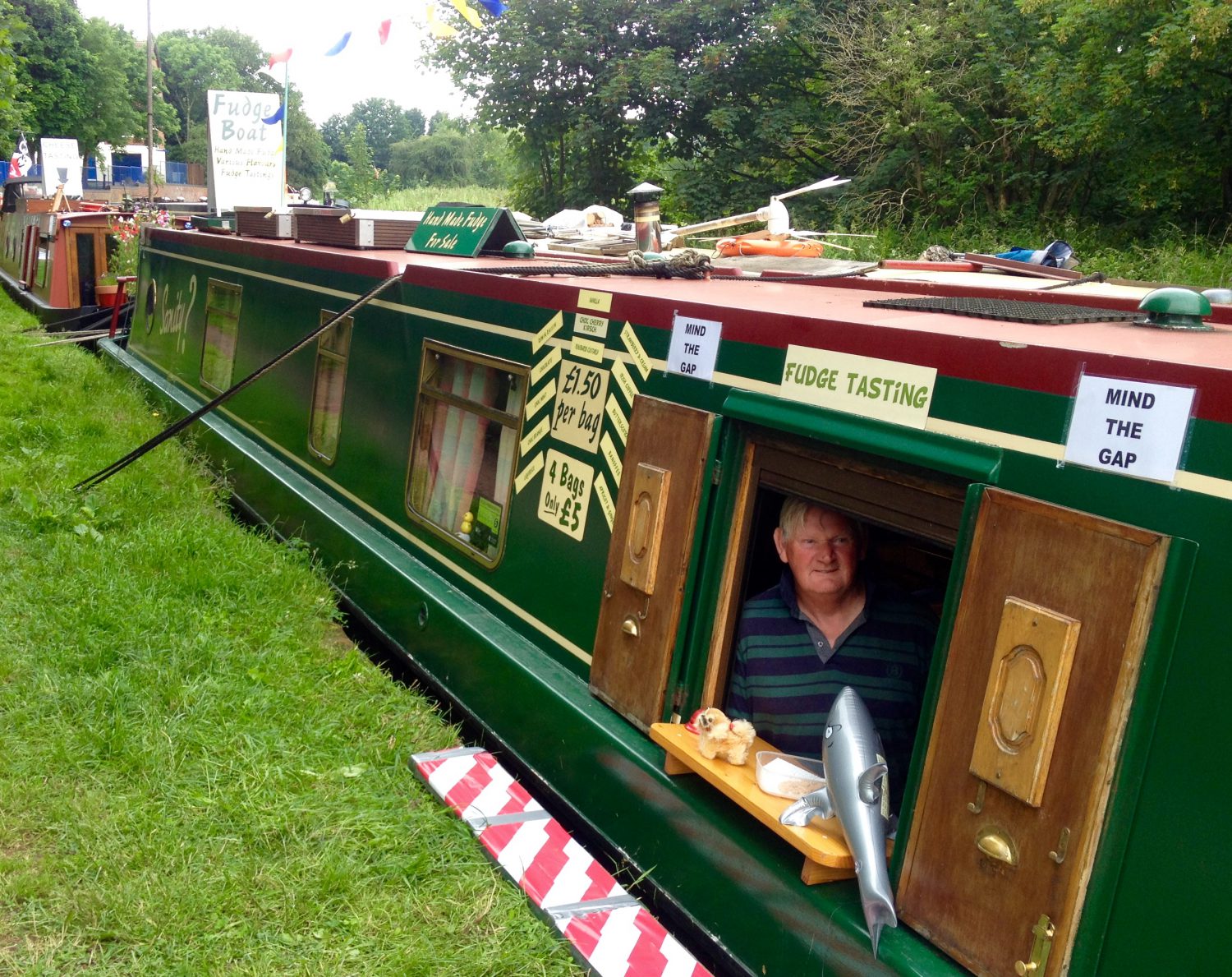 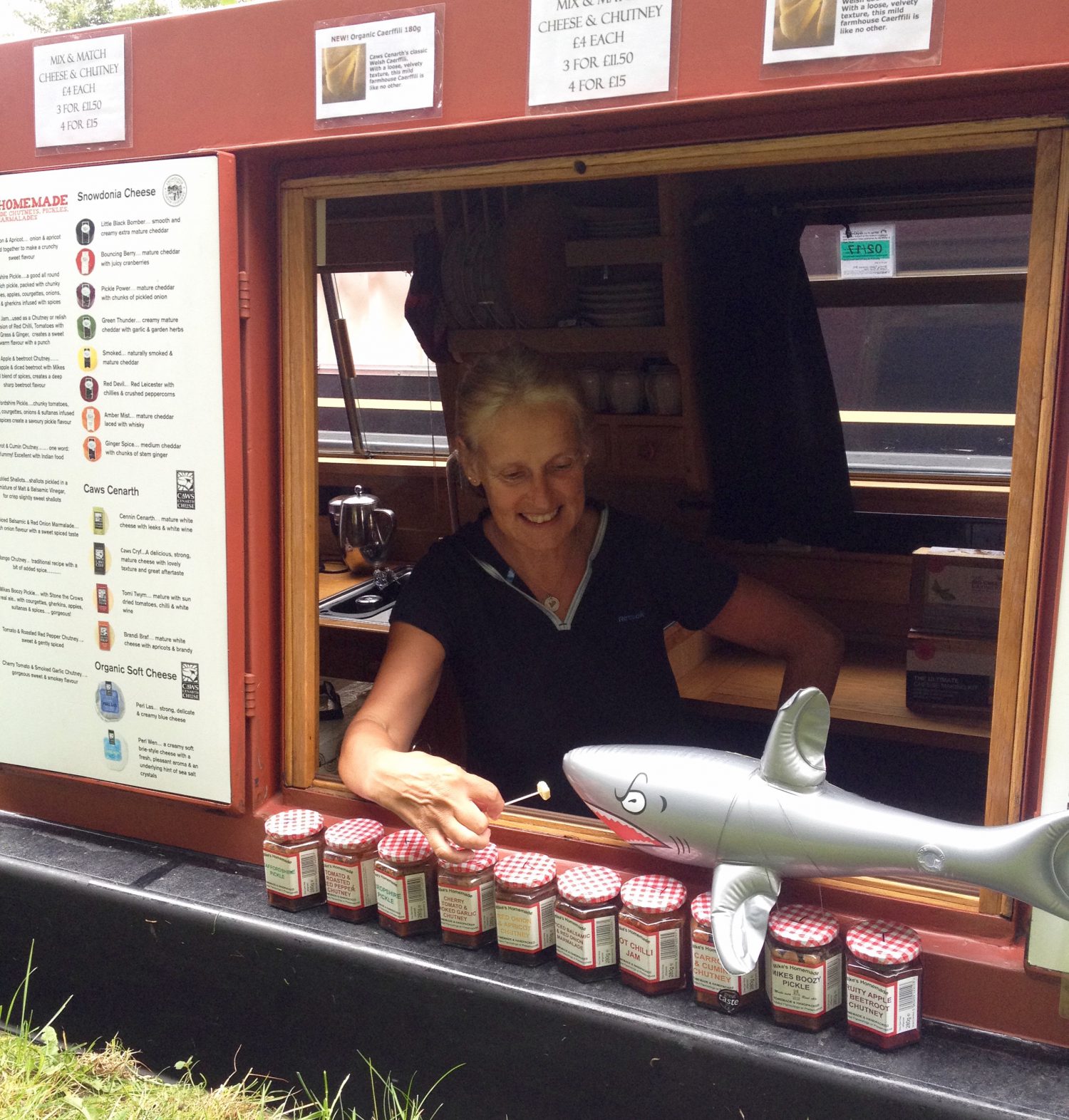 Feeling cheesey with Sue from The Cheese Boat 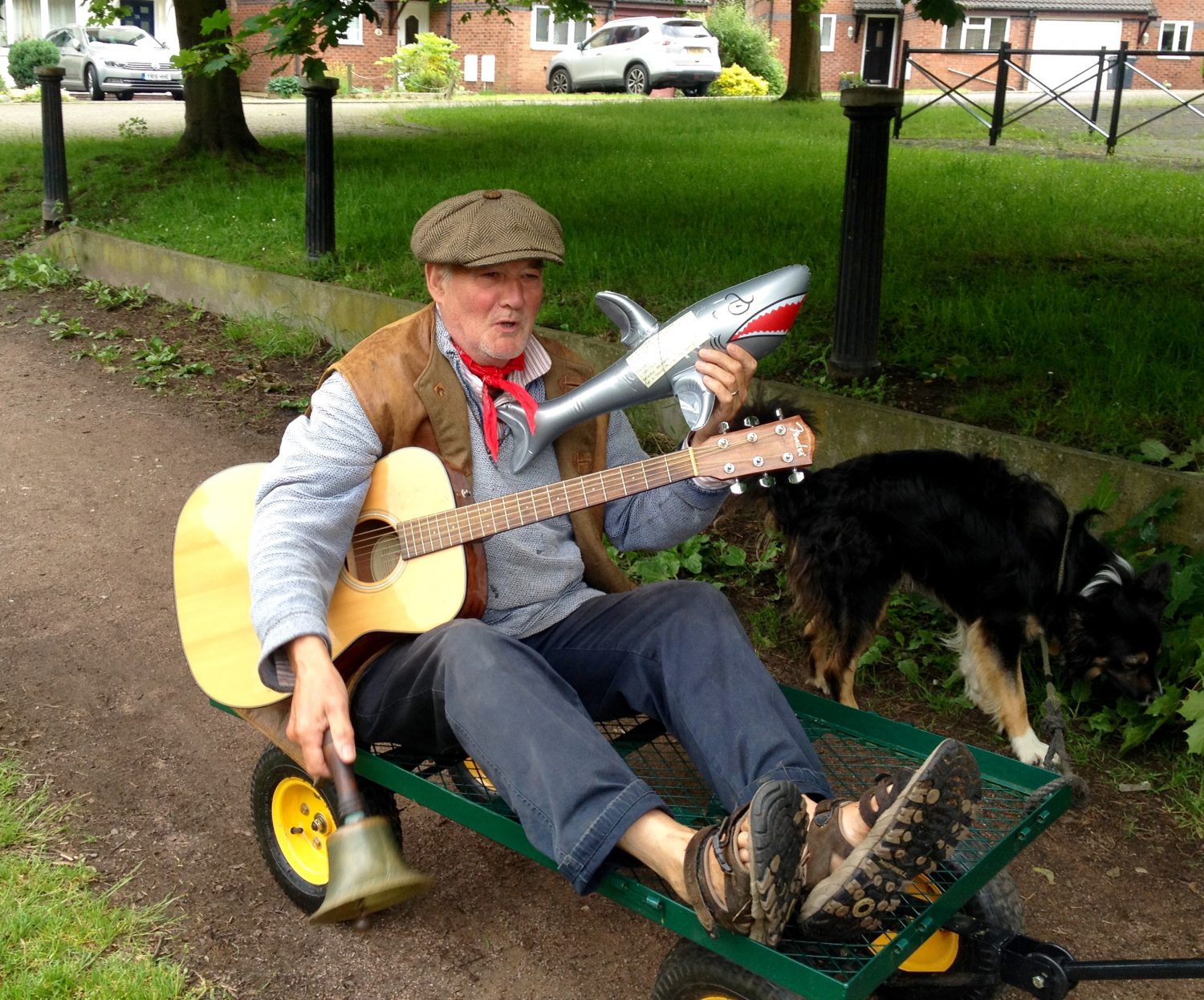 Hitching a ride with Duncan, our boating neighbour, from the band ‘Earl Grey and the Charwallas’ 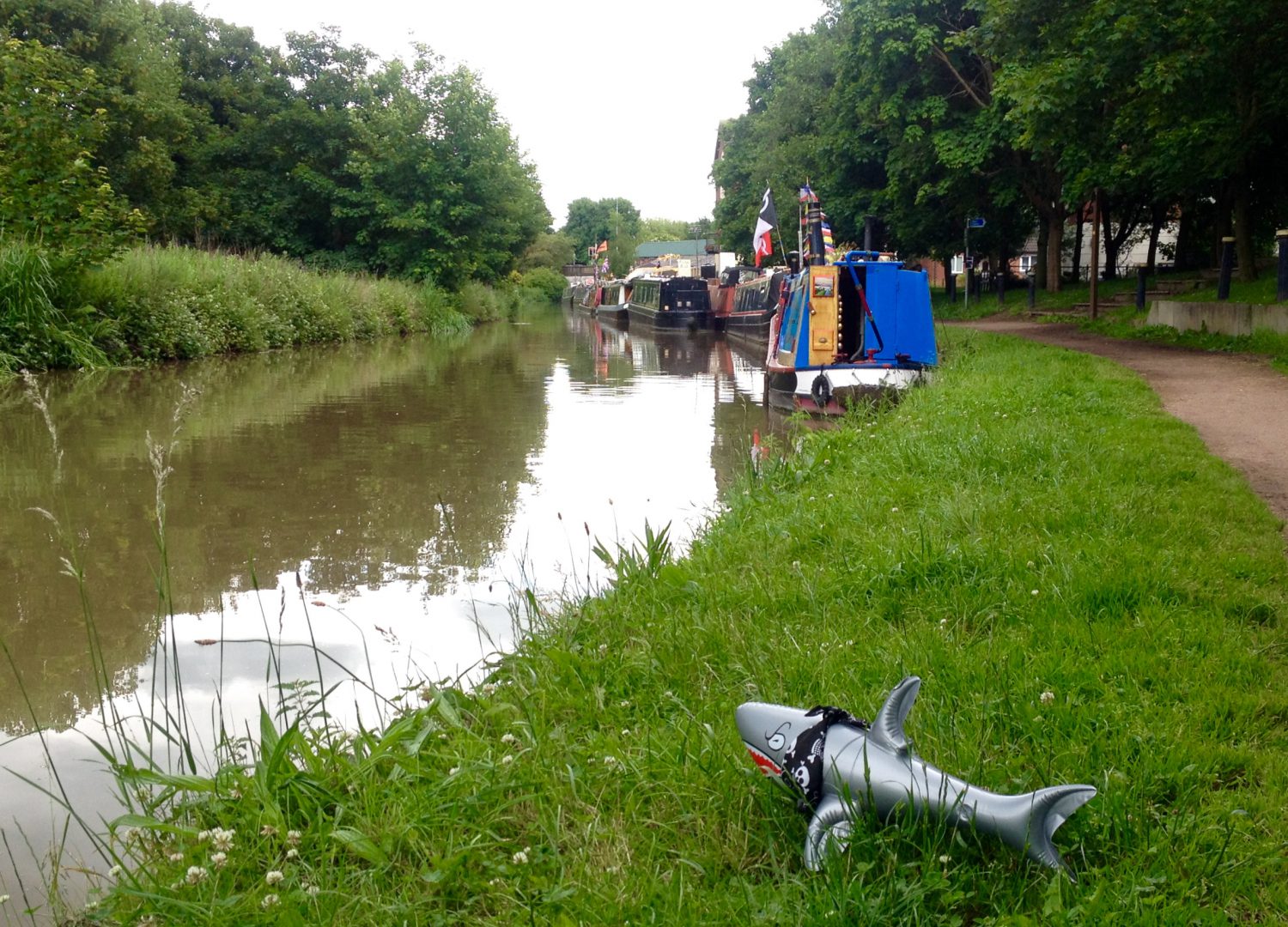 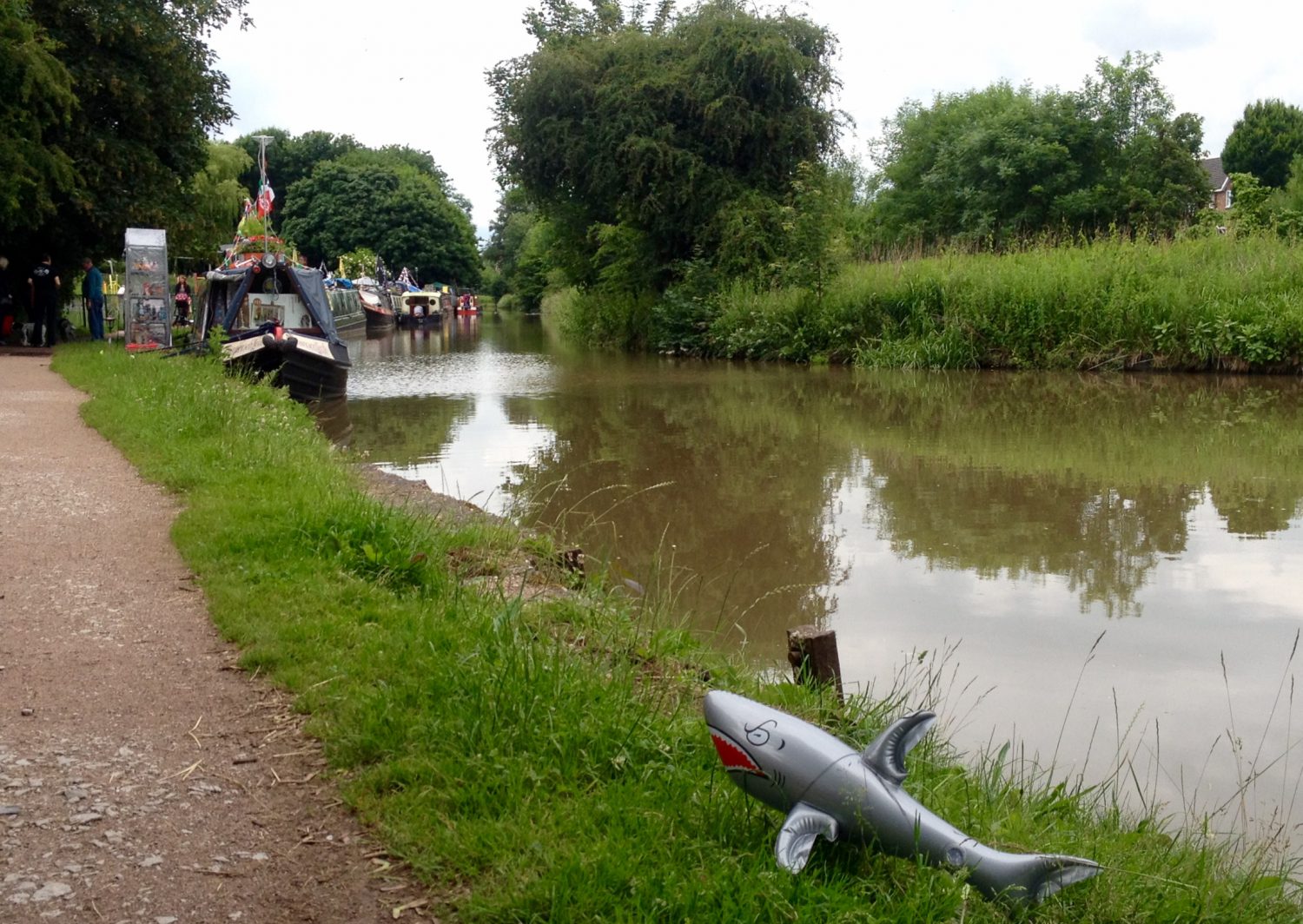 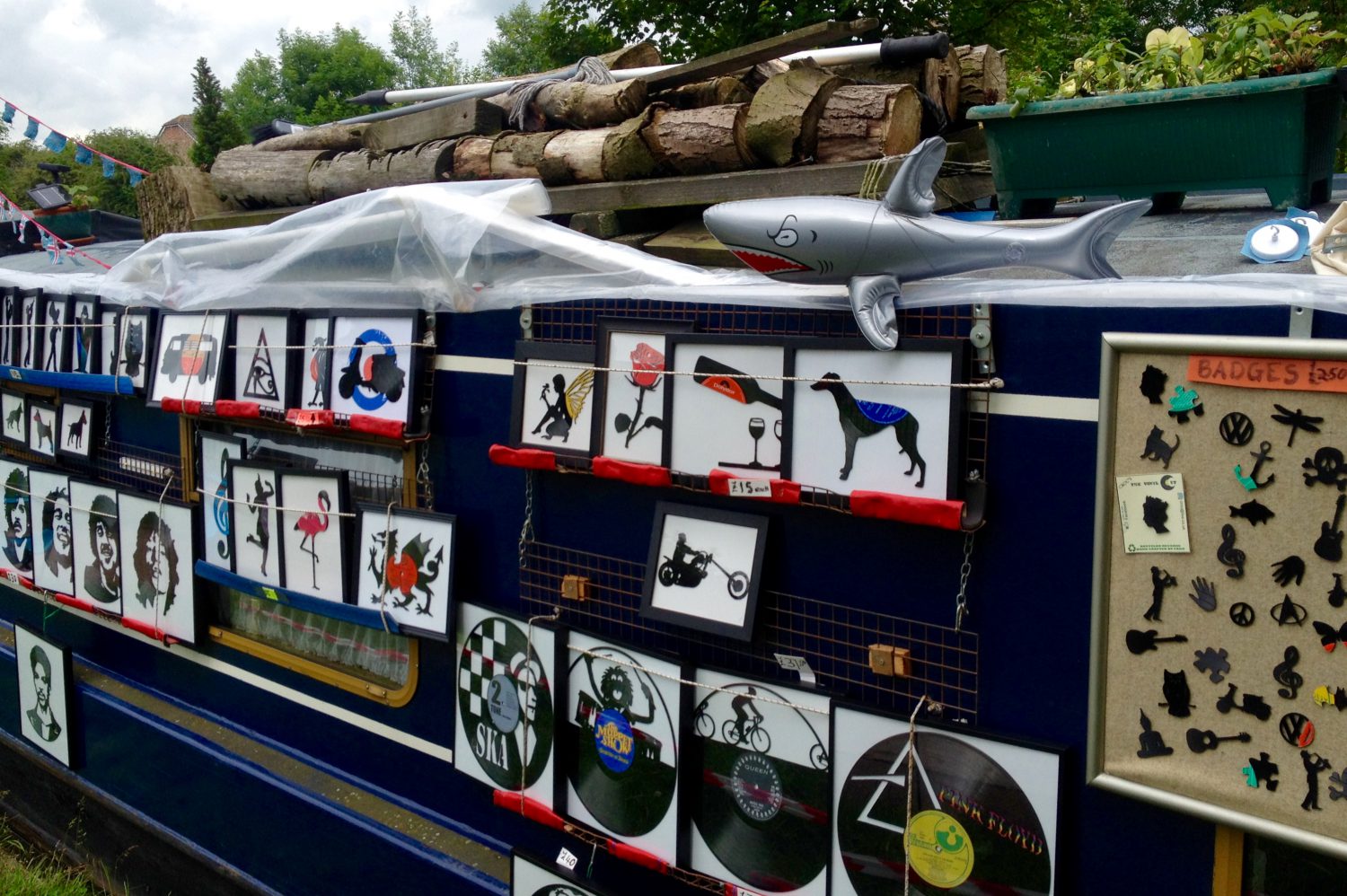 Checking out Croc the Vinyl Cut 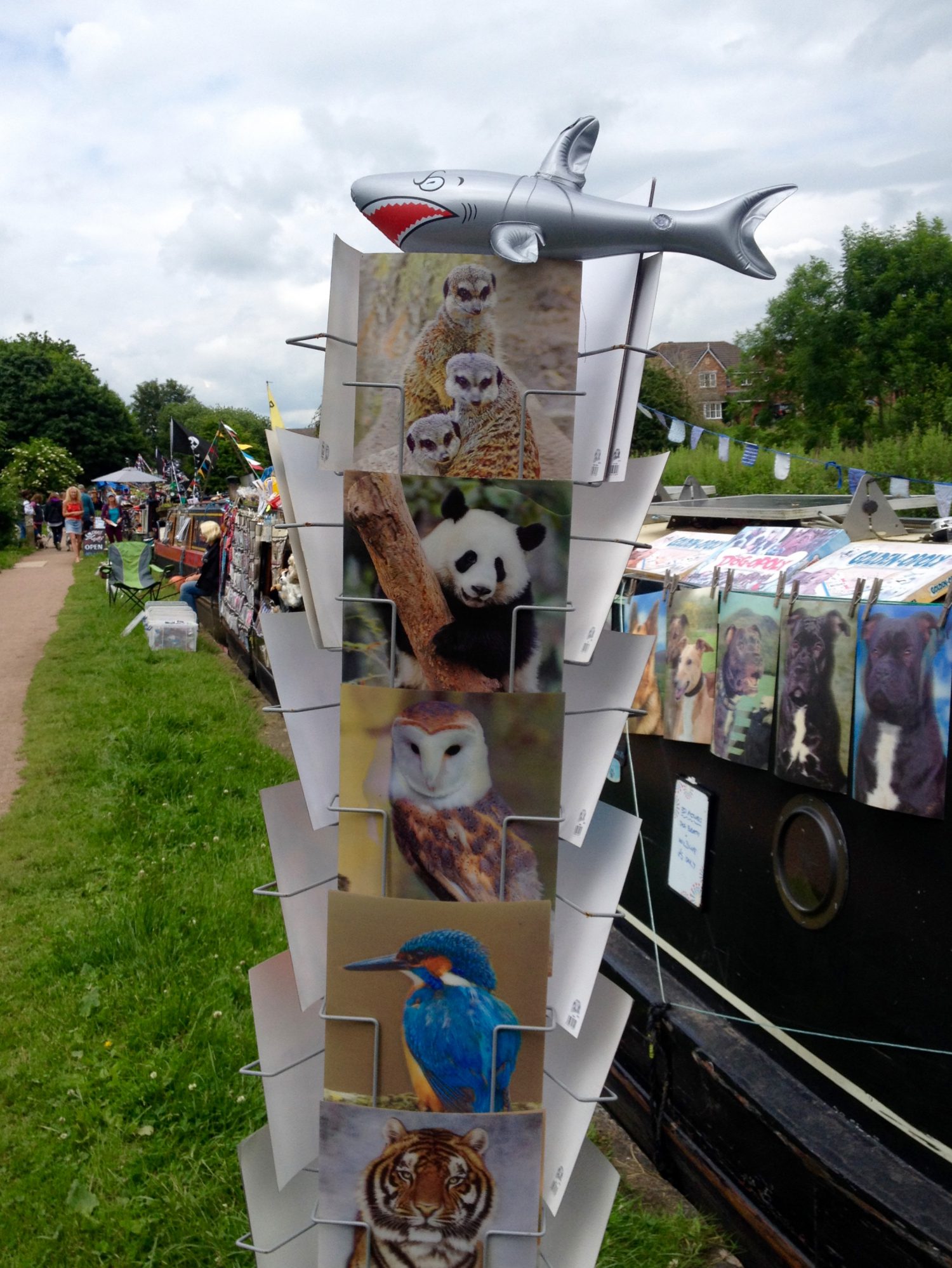 Made it to the 3D canine collection on The Doggie Boat 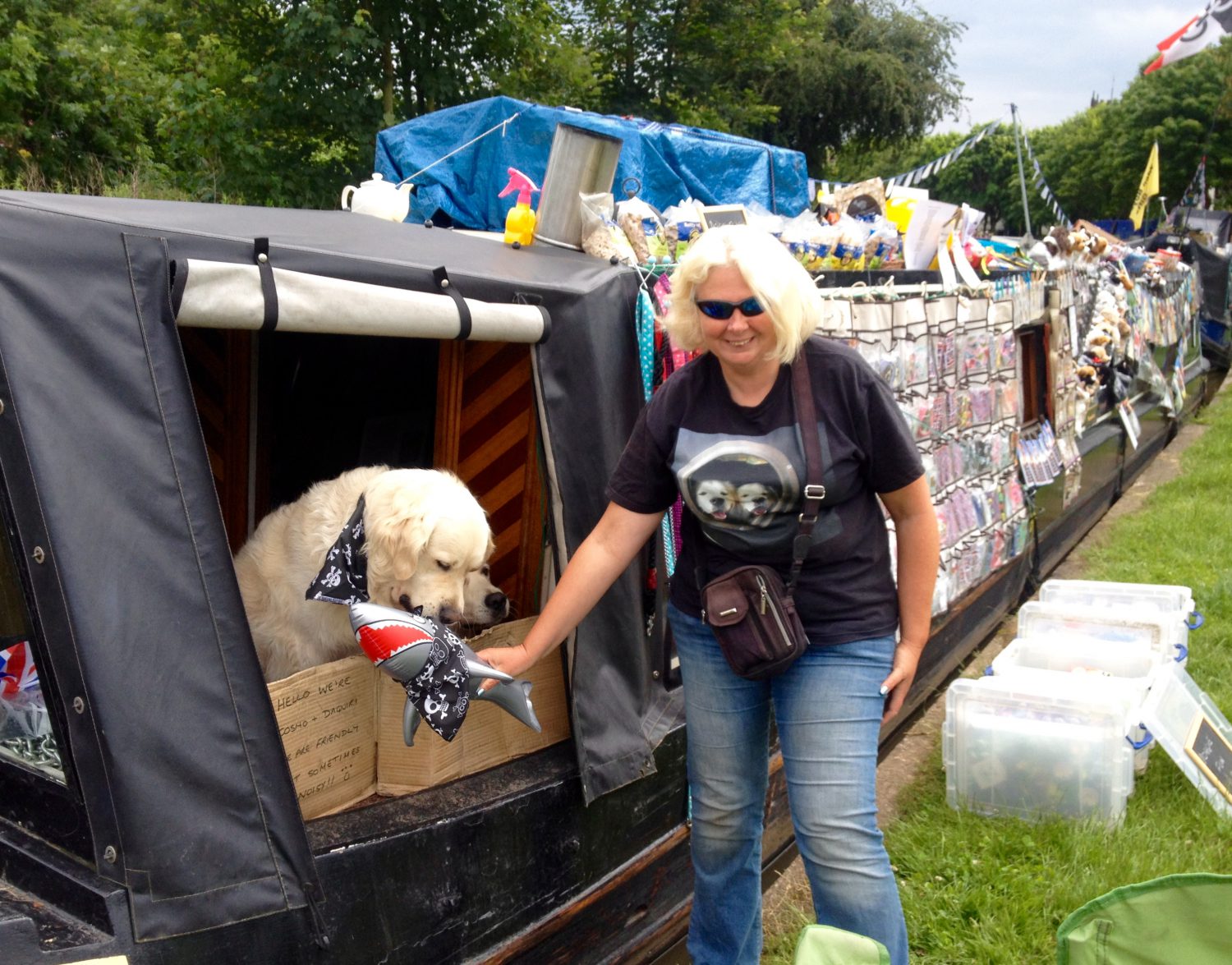 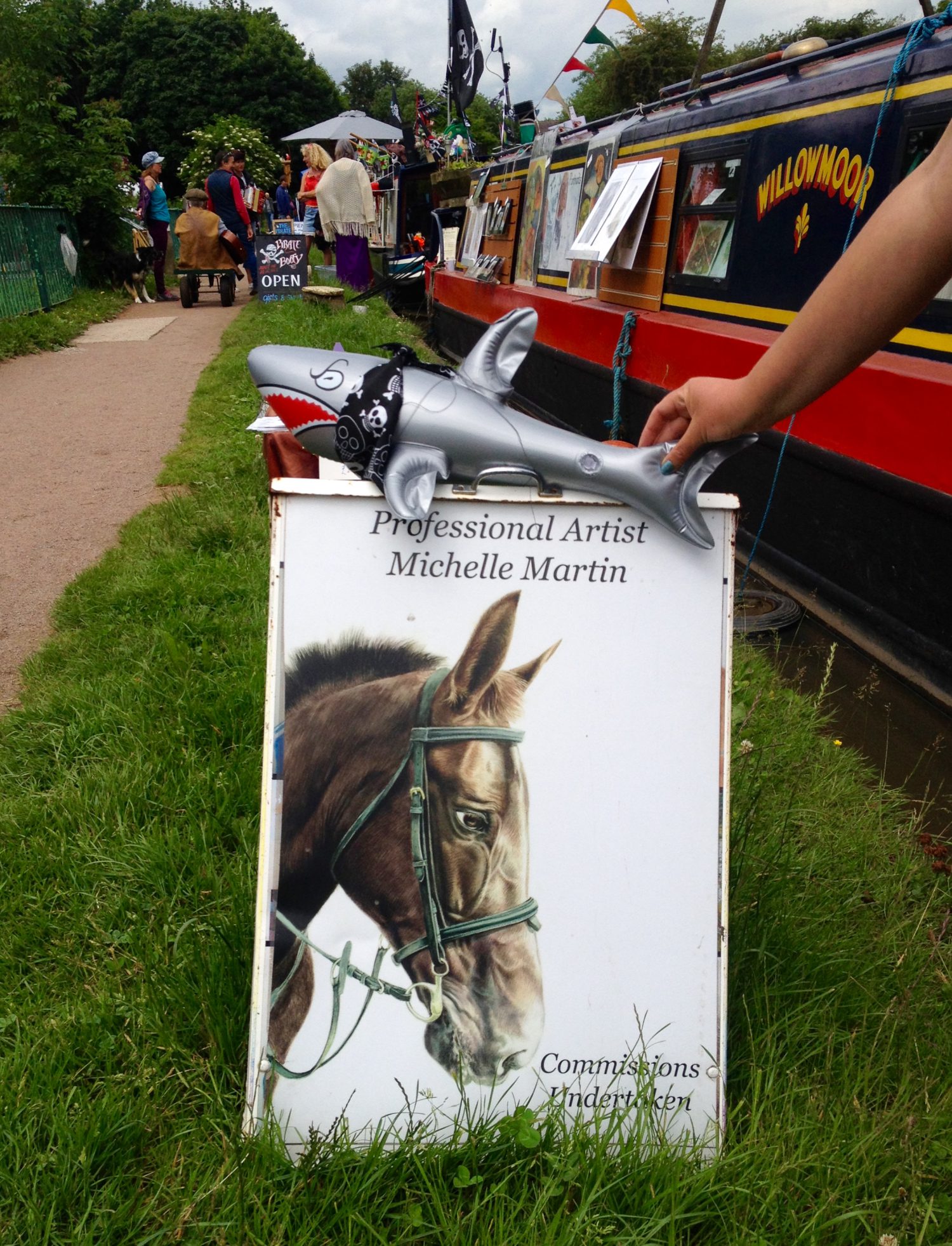 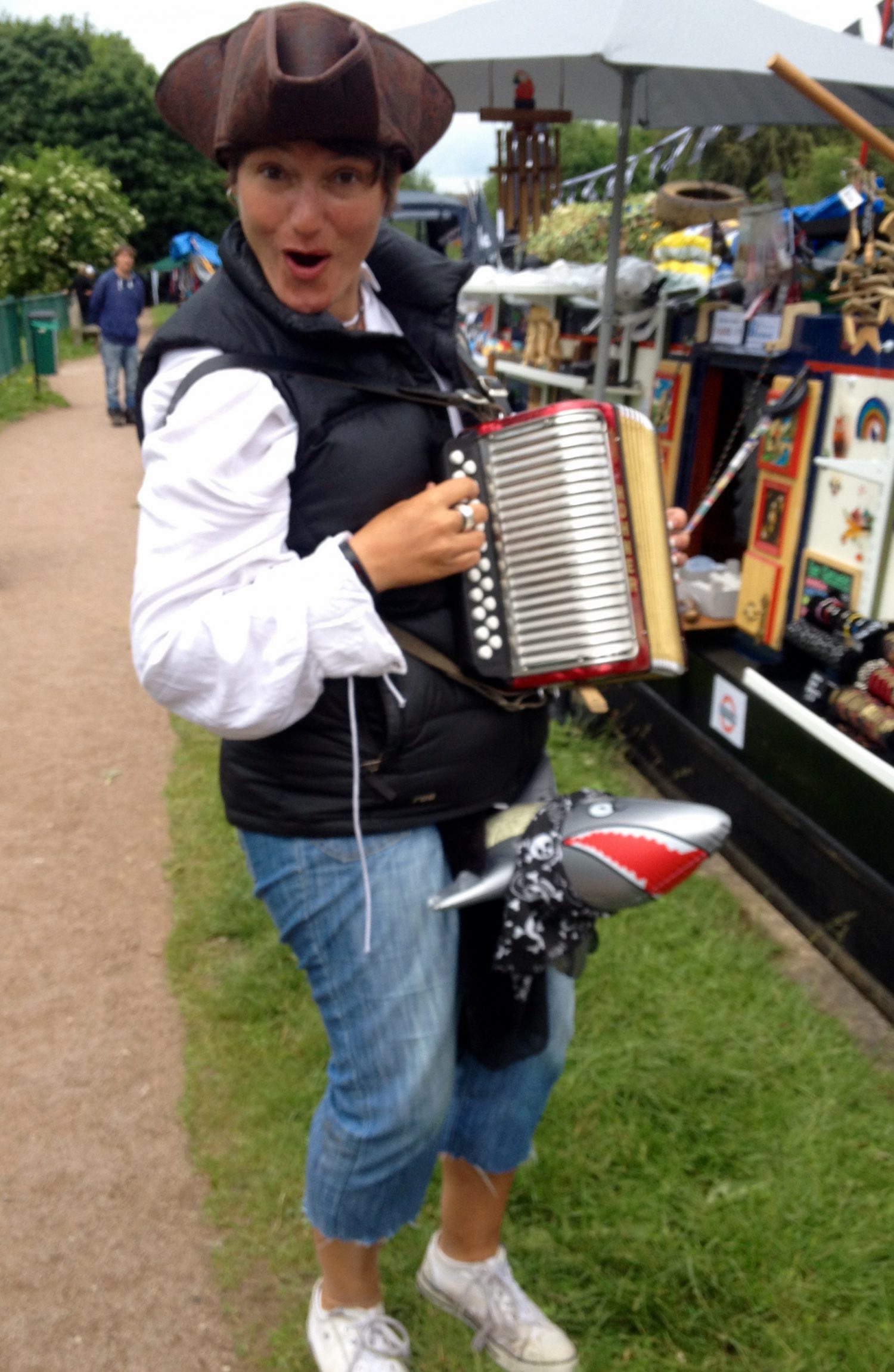 Getting acquainted with Heidi from The Pirate Boat 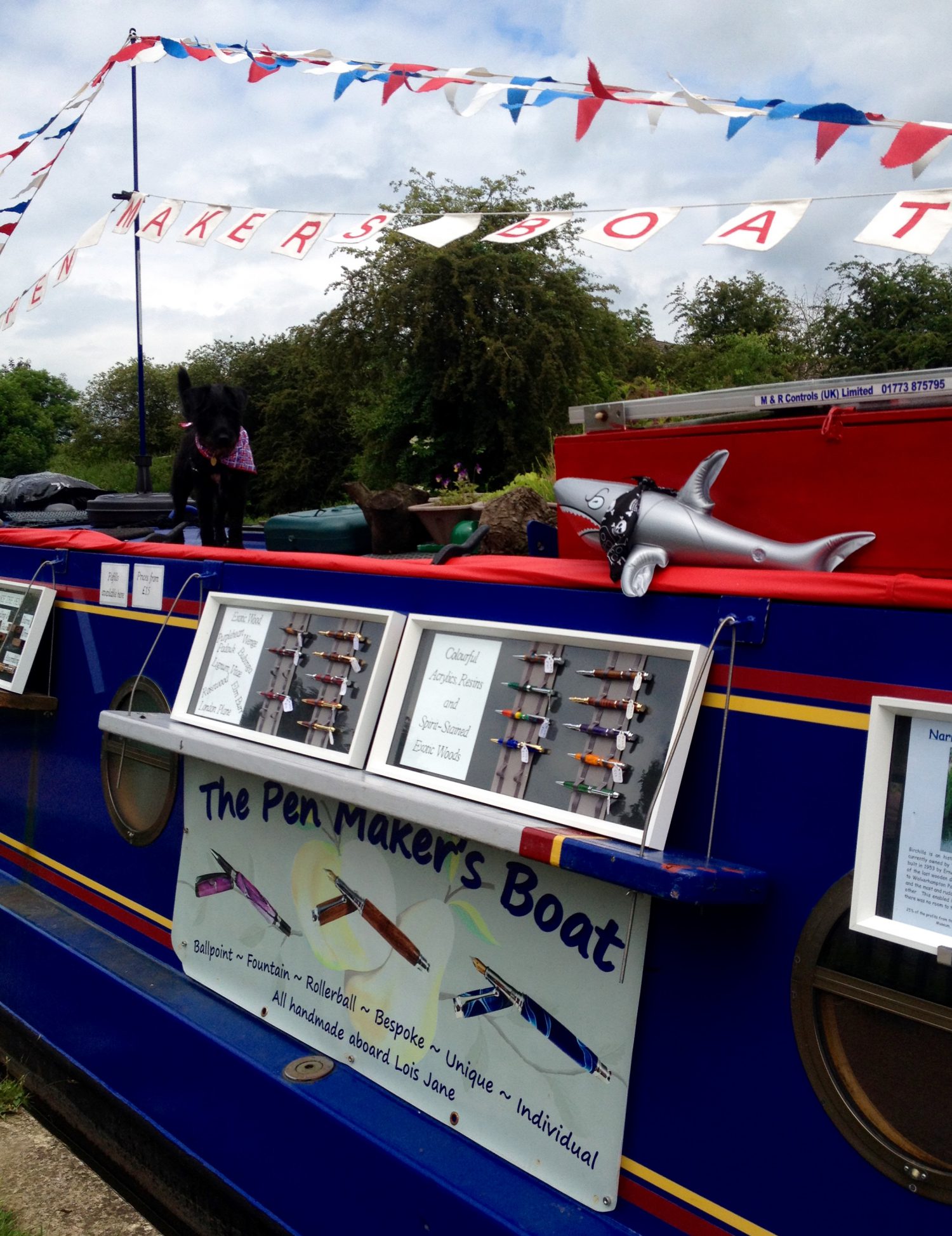 Admiring the hand turned pens on The Pen Maker’s Boat 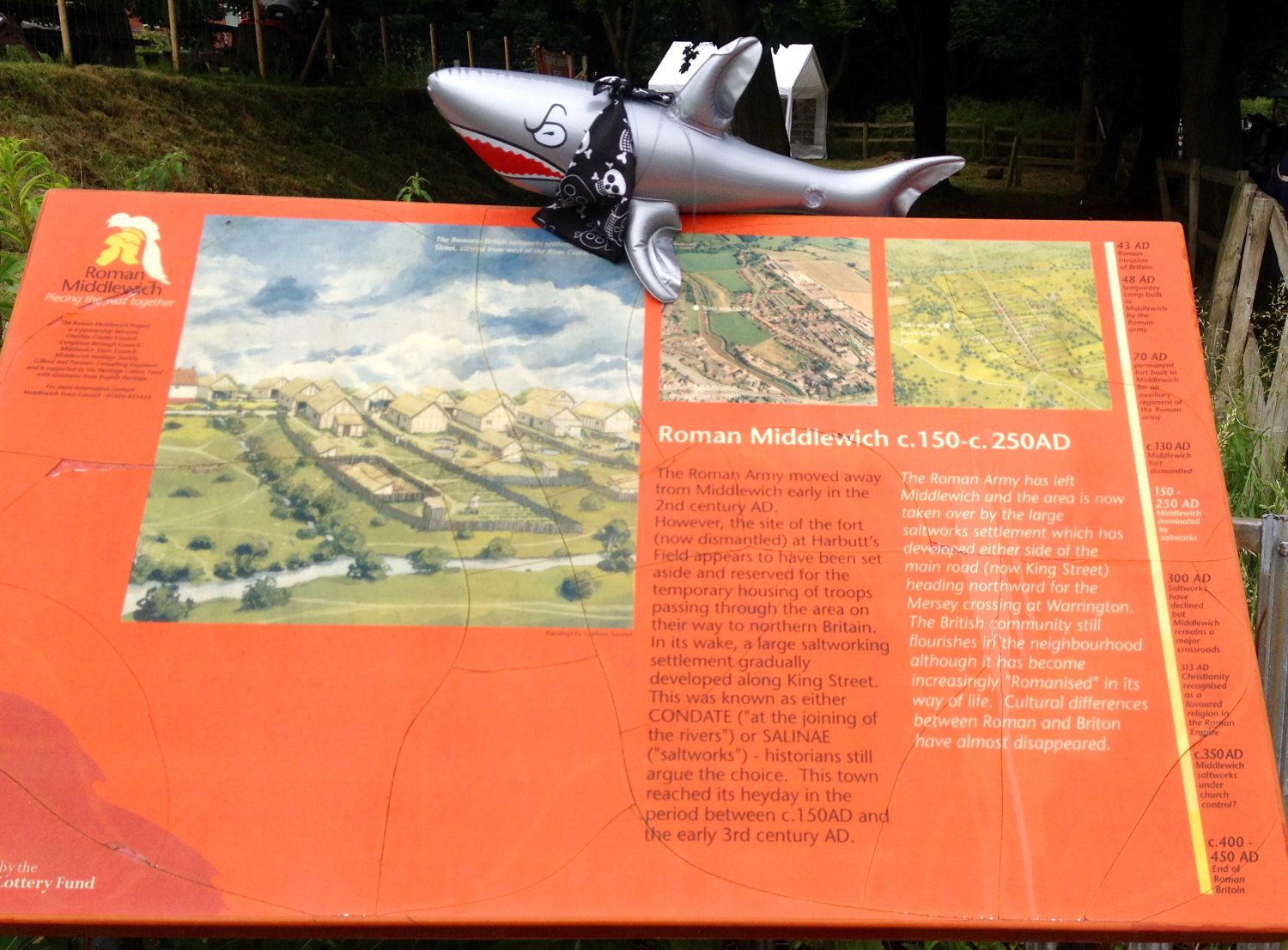 Learning a bit about the history of Middlewich 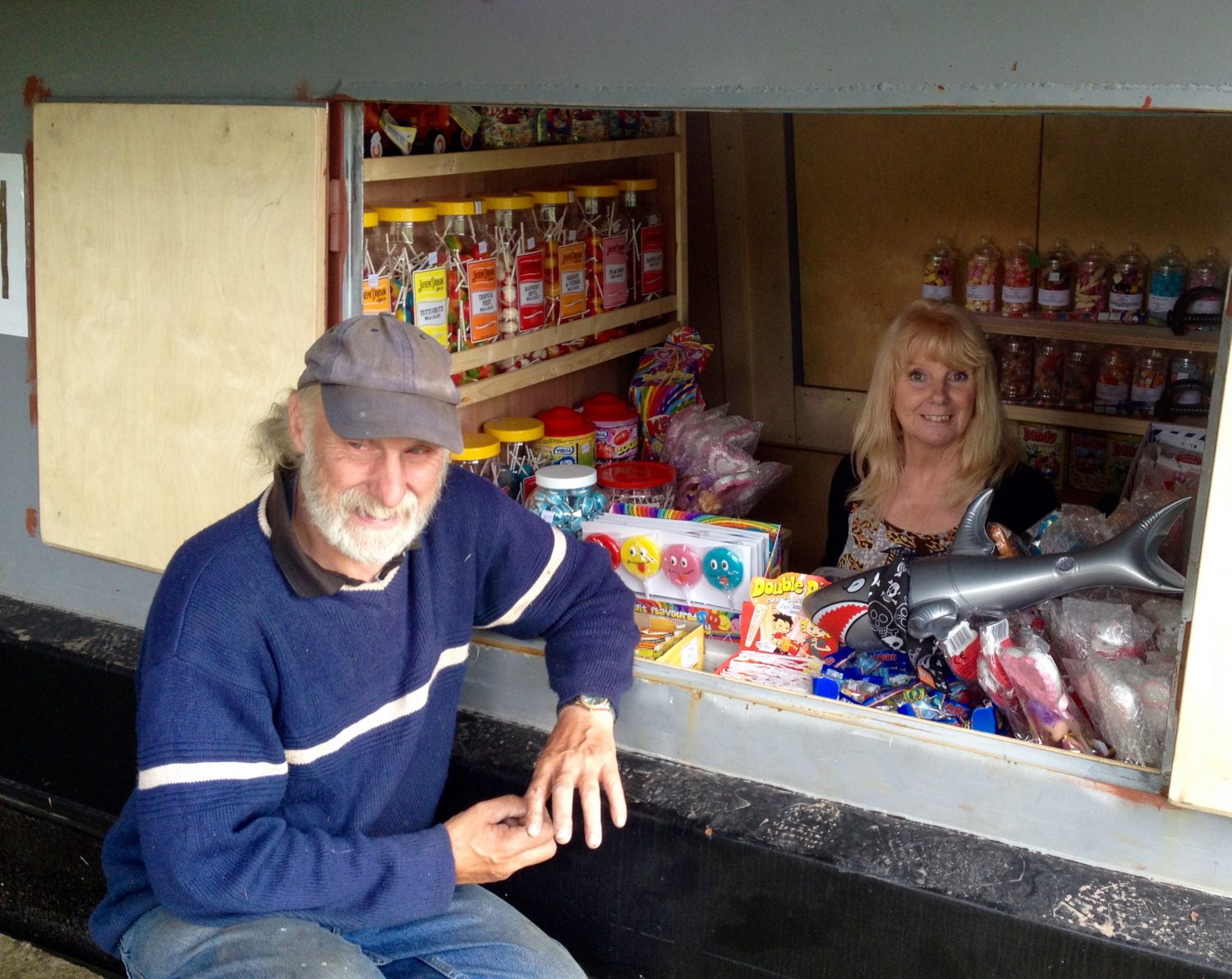 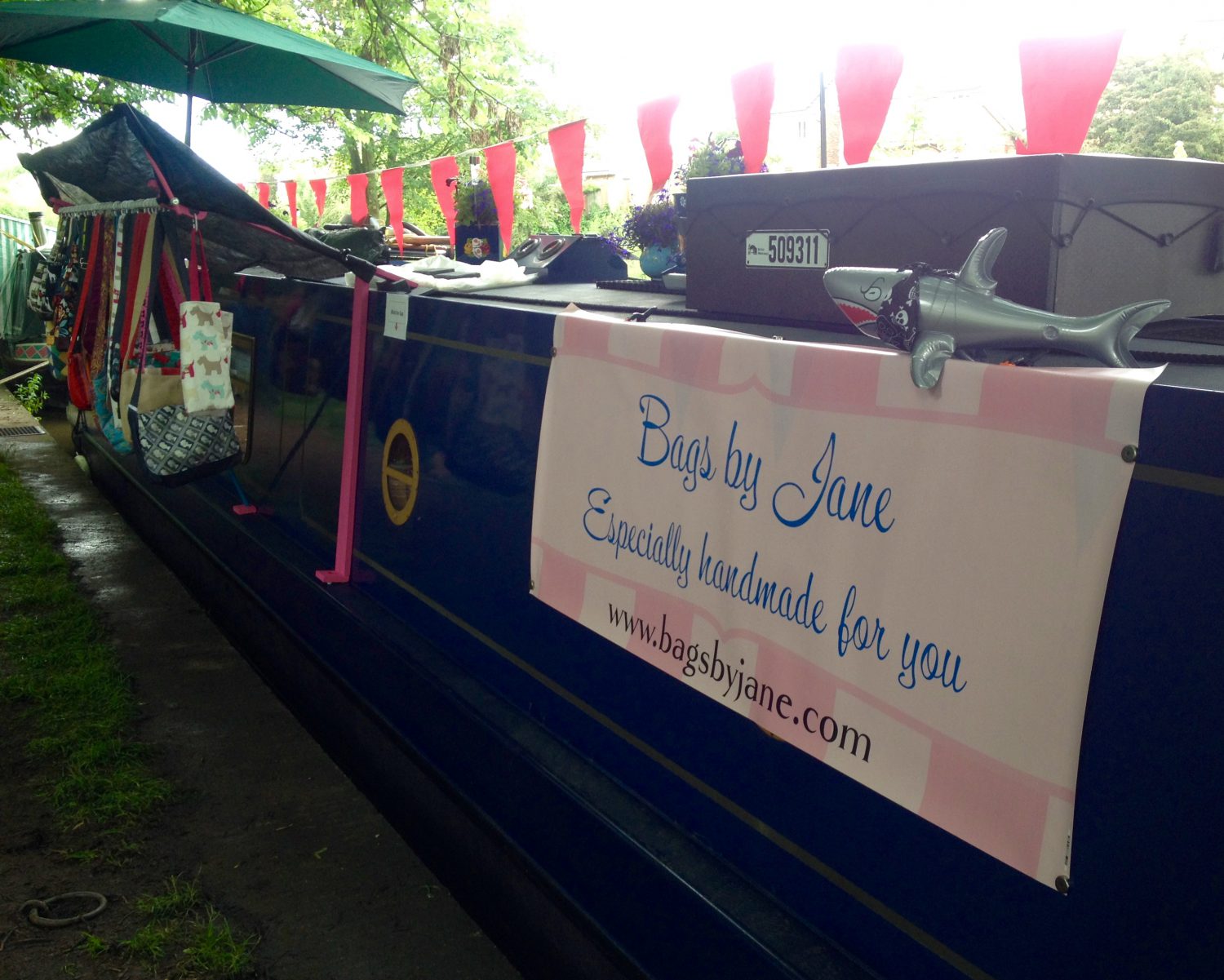 Wondering if he can find a fin-bag from Jane … 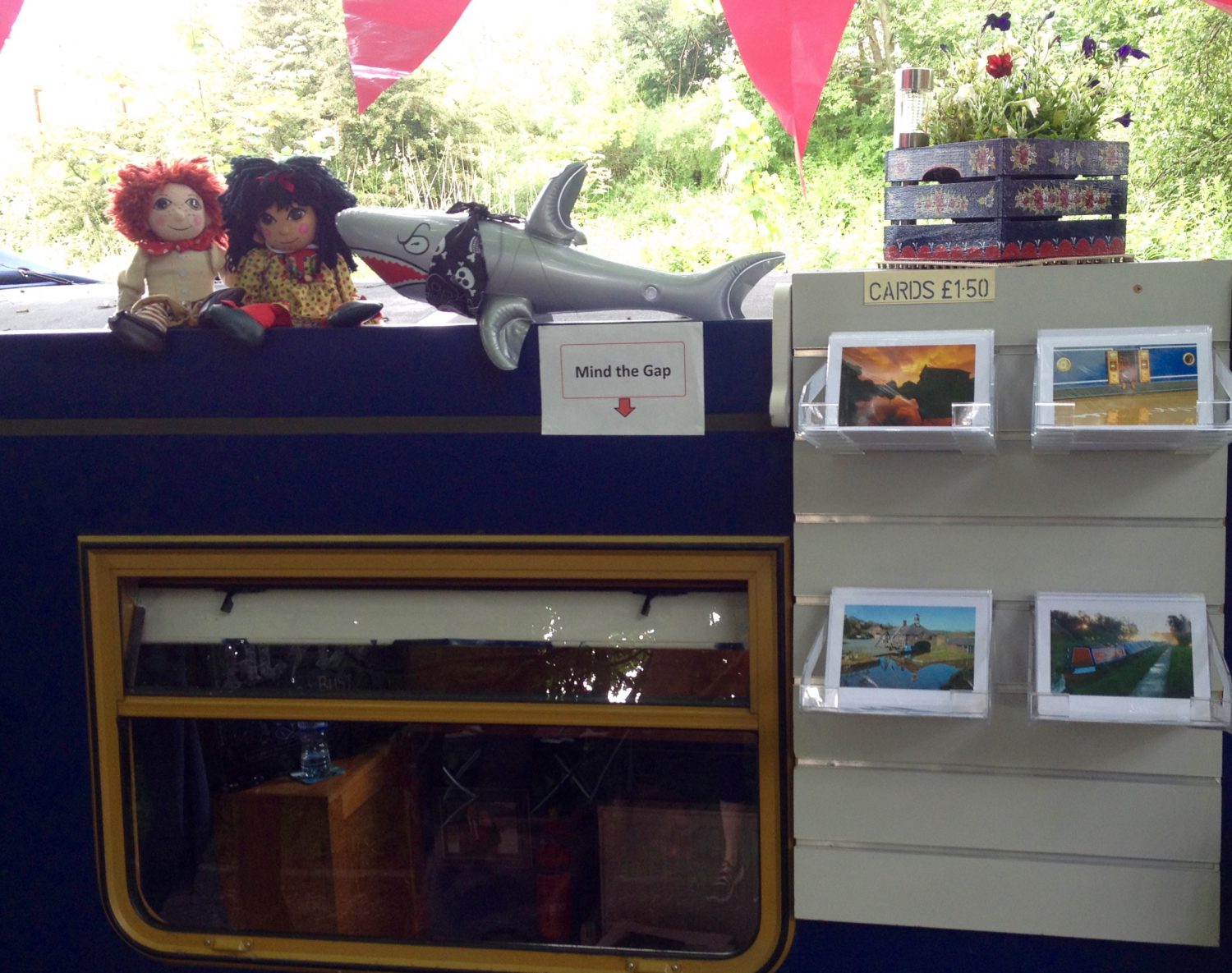 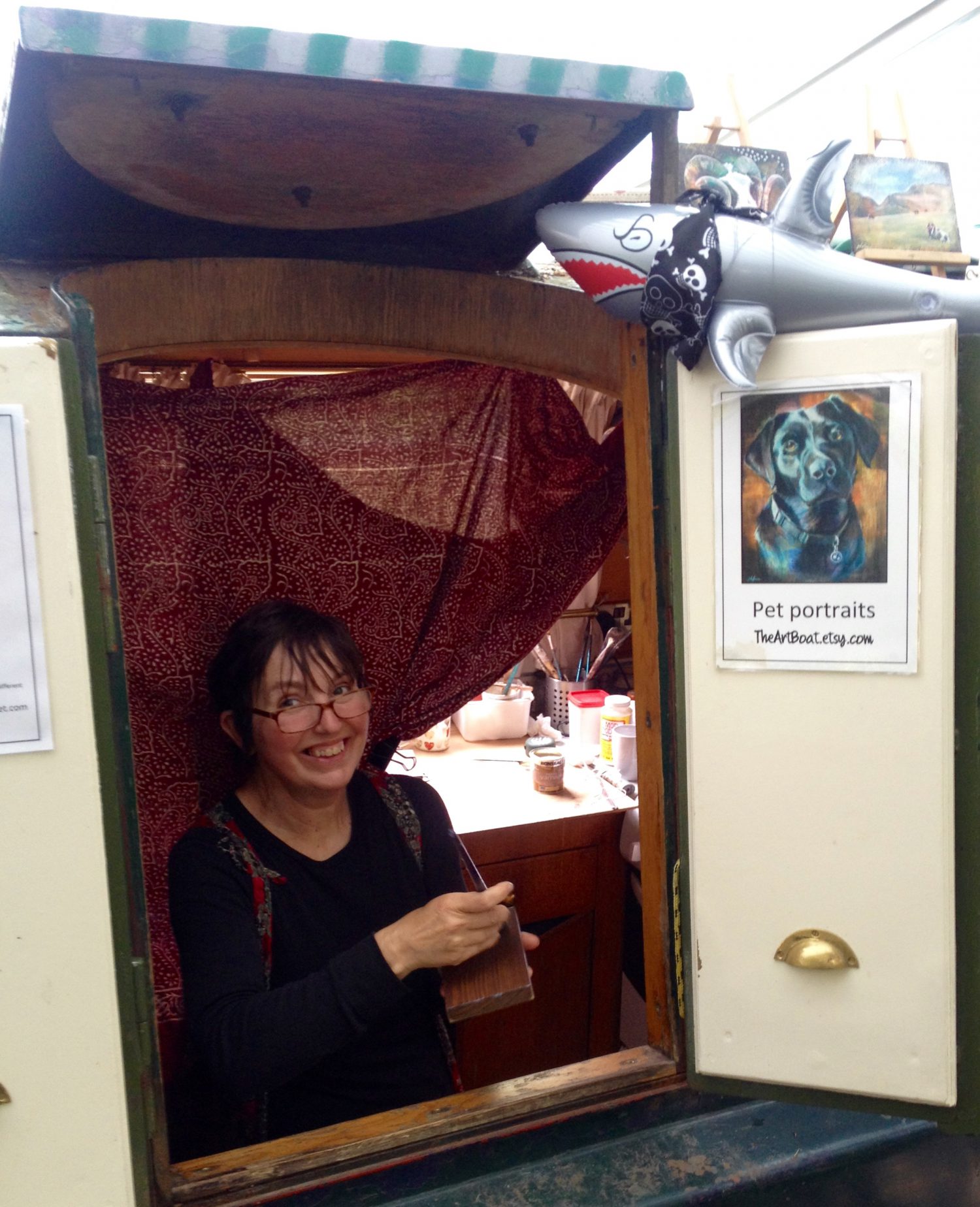 Maybe Jan on the Art Boat wants to paint his portrait … 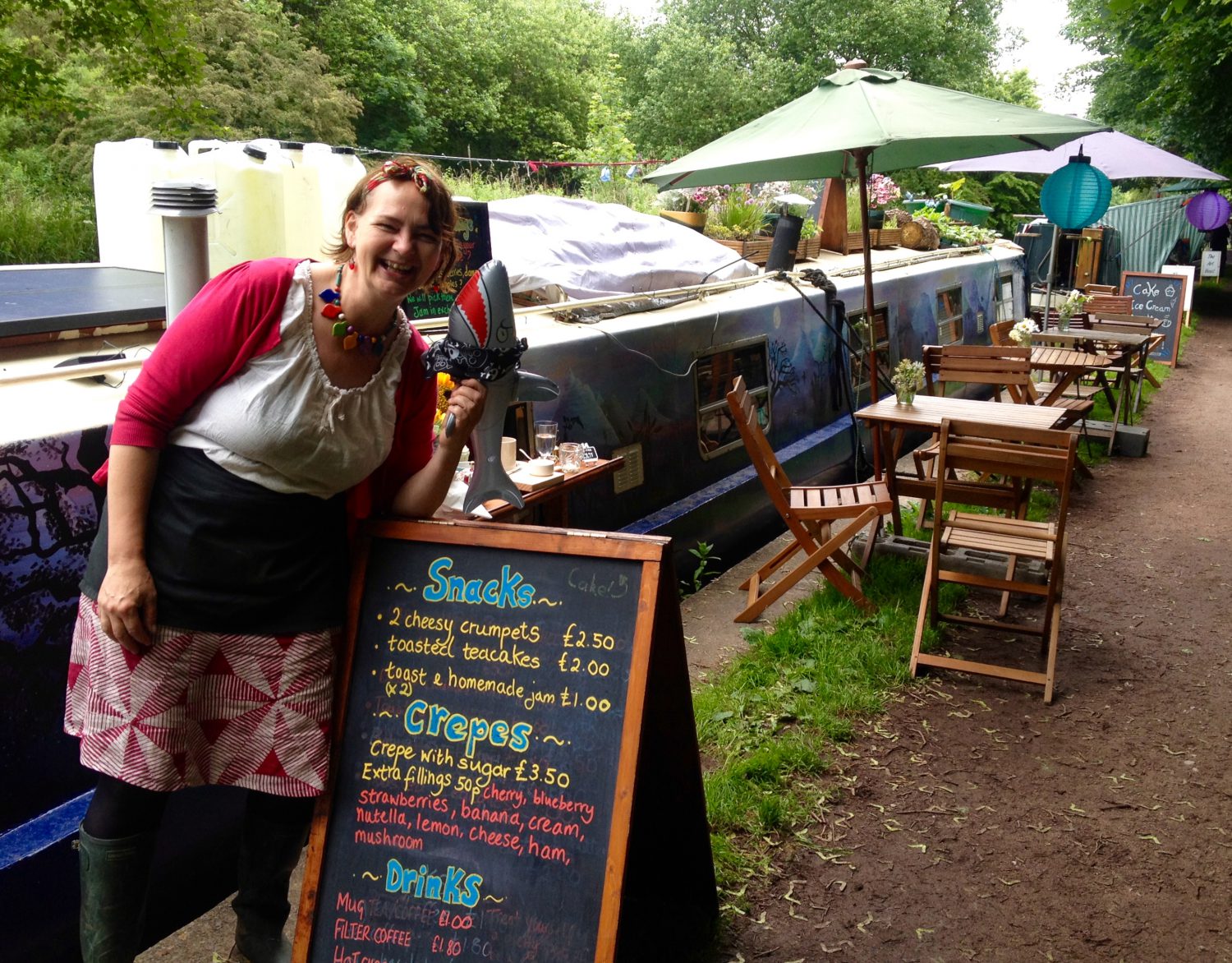 Feeling tempted by Sam’s Cakes on the Cut

We were all thankful for dry weather most of the weekend, though temperatures are remaining stubbornly low for this time of year. In fact Gisborne, in winter, is having warmer days than we are much of the time! However we were extremely grateful the rain stayed away until Sunday afternoon this time. Out of all the events we’ve traded at so far this year, only one has remained rain-free.

Both mornings were fairly quiet, we deduced due to the plethora of planned of activities in and around the town. One of downsides of trading is we go to a whole heap of fabulous festivals but rarely get to see the activities and entertainment on offer. The difference with Middlewich is we can make the most of what’s available in the evenings.

It means long days, with less sleep than we’re used to – but it’s not as if we do it all the time so we find our fortitude and enjoy every moment.

Each afternoon was buzzing with people from near and far, and Saturday evening was as lively as previous years. I finished facepainting around 7pm, while ‘Sugar Rush’ continued serving sweeties till after 10pm with customers popping along either from the ‘Big Lock‘ pub, or on their way to another venue.

On Sunday Sharky McShark sadly left The Home Brew Boat. He’d decided he wanted more adventures, so headed off to Heidi for a spot of swashbuckling. 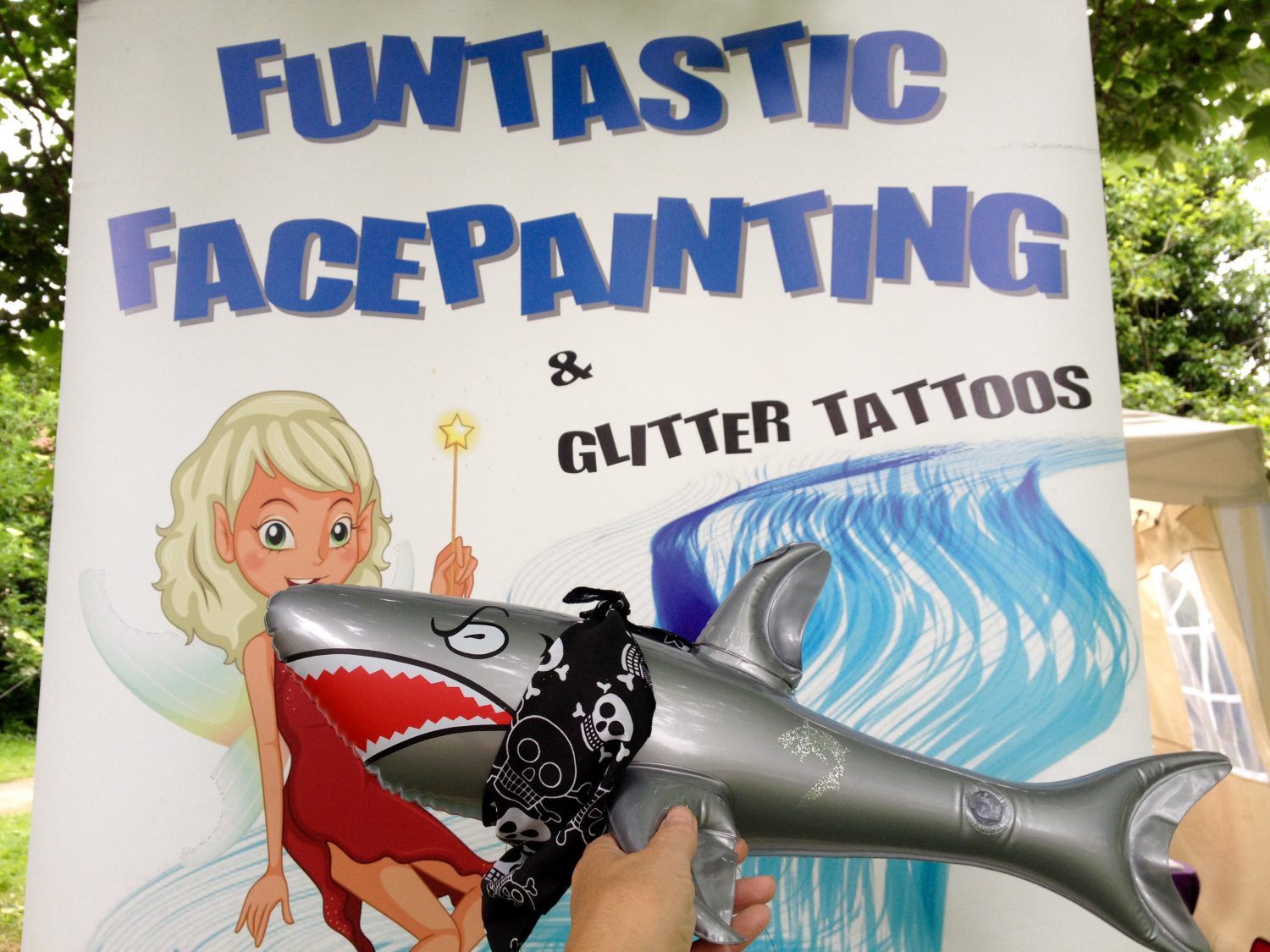 There’s no shortage of pubs in Middlewich, and each of them has some form of live music playing over the weekend.

It’s a Folk and Boat festival, so you’d imagine the sounds would be mostly folk-based. There’s still a wide variety of music, from ‘The South’ (previously The Beautiful South) as the headline act on Friday evening), to ‘The Christians’, ‘Early Grey and The Chugwallas’ (whose drummer was moored next to us and Duncan plays in open mic sessions at Boar’s Head (our favourite place), and the adorable Michelle Martin who lives on the ‘Art on the Water’ boat and as well as an amazing artist is a talented musician and singer/songwriter.

Our favourite and go-to place is The Boar’s Head, where there’s often a band in the front room, and an open mic session in the back. Those were the cause of  early morning stints four nights in a row! 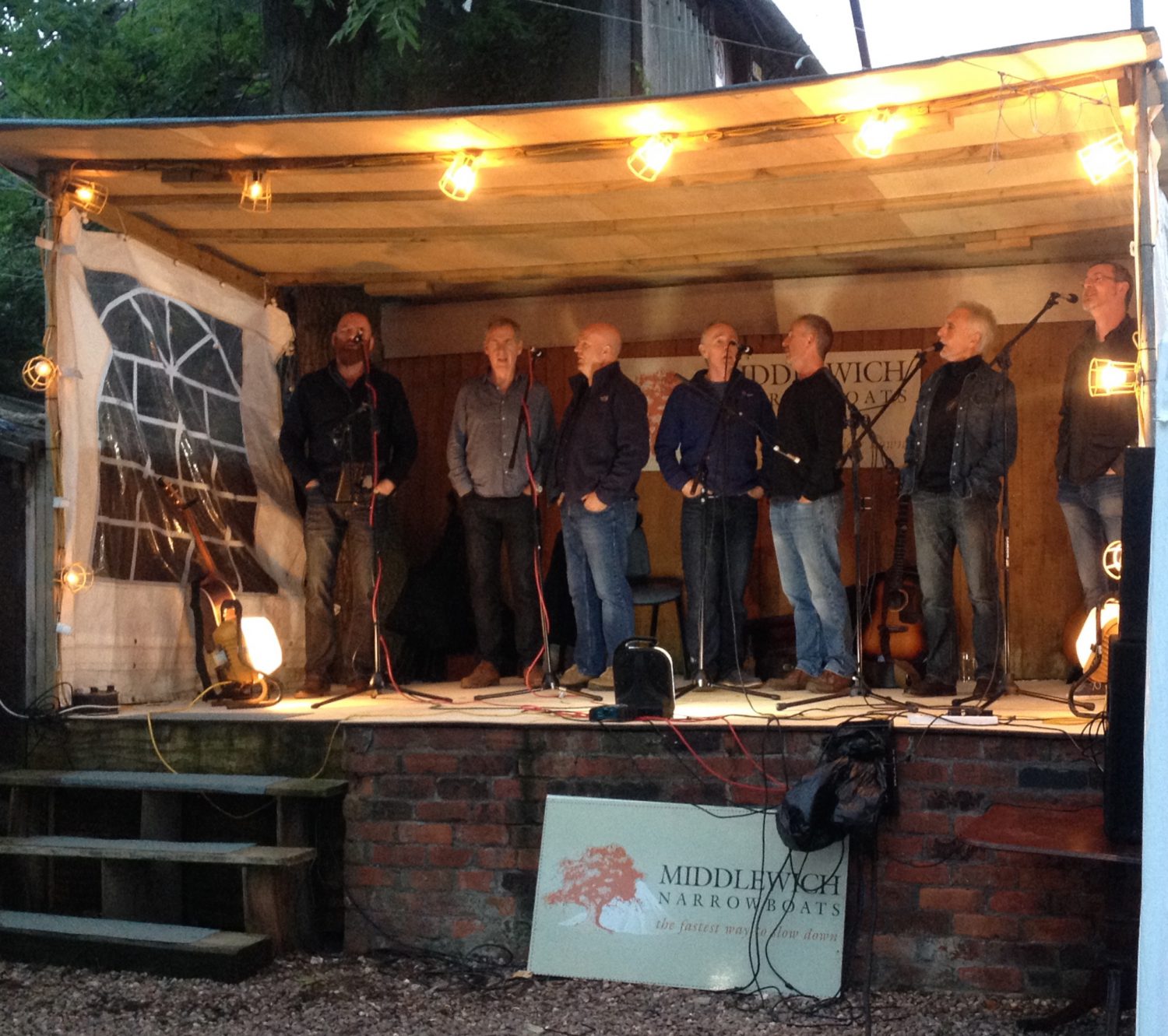 CODA (from Ireland) singing at Middlewich Narrowboats on Saturday evening 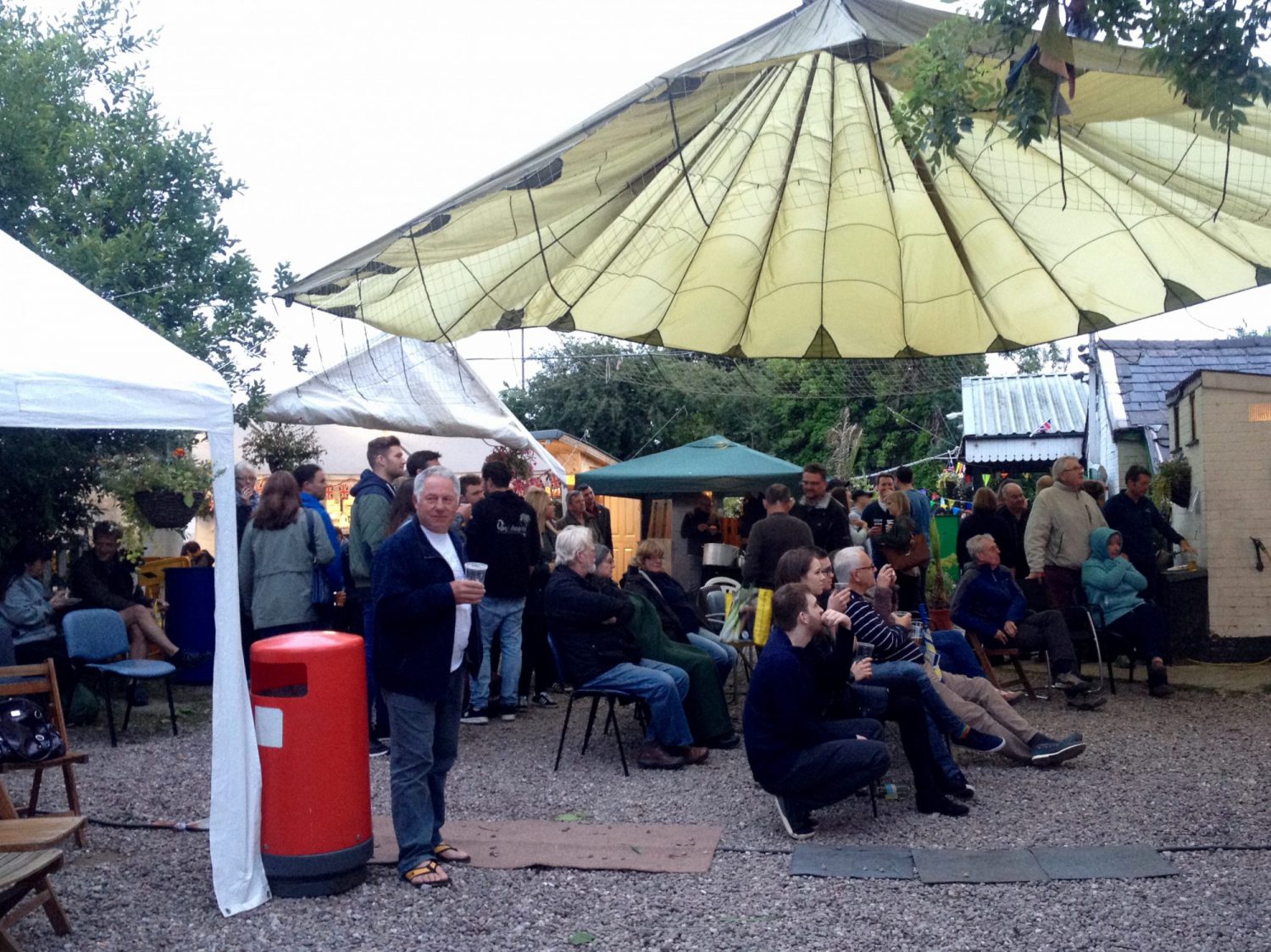 Another highlight of the weekend is the sheer volume of trade boats, with some new to the event this year. Some traders really embrace the evening entertainment, others find they’re so tired at the end of the day they snuggle up on board.

Thugs that do venture out often meet up sporadically. On Sunday evening we had a loosely planned get-together in The Boar’s Head. It’s an infrequent occurrence to have such an ability to socialise at festivals, so it was enjoyed by many. 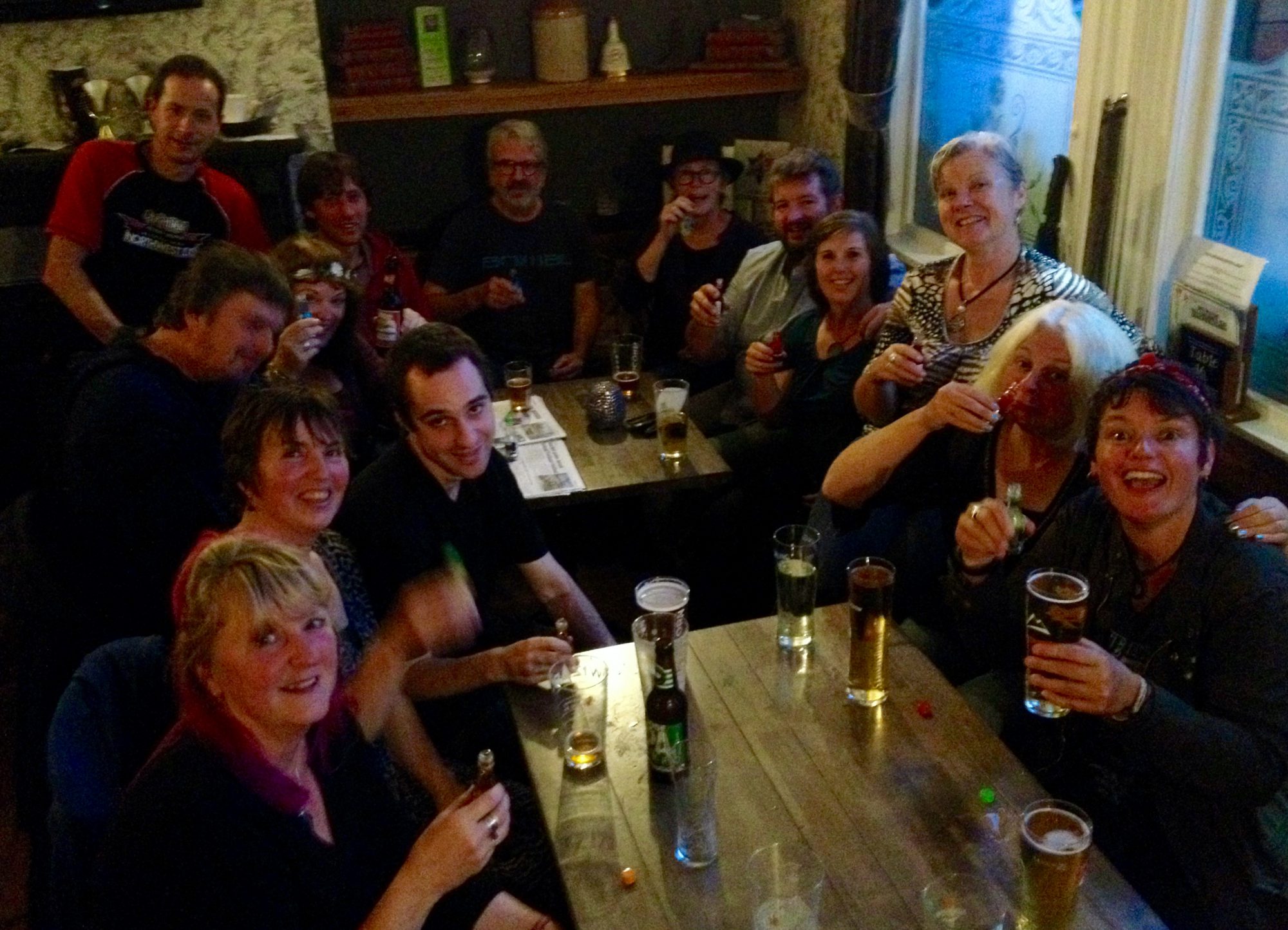 Some of the Floating Traders, at The Boar’s Head, celebrating a successful weekend

We’ve already sent our email to book in for 2017 – it’s definitely a must-do festival for us. That’s if we’re still here (read on).

Our next planned event is at the Roving Canal Traders Association Floating Market in Chester on 1st, 2nd and 3rd July. Thankfully it’s not to far away, so we can chill a little and give the boat a rest!

I’m at mum’s now, having travelled here by bus and a couple of trains yesterday, until Friday when I’ll catch a train back to Barry (no idea where yet!).

We’ve got an appointment in Birmingham with our solicitor on 5th July, to complete the paperwork for Barry’s UK Spousal Sponsored Visa. His current one expires on 21st July. We’re pretty confident that we’ve gathered together sufficient evidence of the longevity and commitment of our coupledom, and our ability to sustain ourselves, but who knows what the vagaries of the Immigration Department will feel …

It’s a bit of a testing time until we have another stamp in Barry’s passport.

3 thoughts on “Making the most of Middlewich FAB Festival”