We easily survived the four long days of travelling at 3 mph last week, in anticipation of Barry’s fabulous itinerary for my younger sister Viv and her husband Ray.

It’d been almost three years since they stayed on board together, due to a variety of reasons like their wedding at Bath last February.

Early on Thursday, moored up at a ‘flash’ in the countryside, Barry peeked through a porthole and couldn’t resist stepping out onto the stern for an early misty morning shot – it was a good job we were the only boat around, and there were no crack-of-dawn walkers, as his night attire is basically a birthday suit! 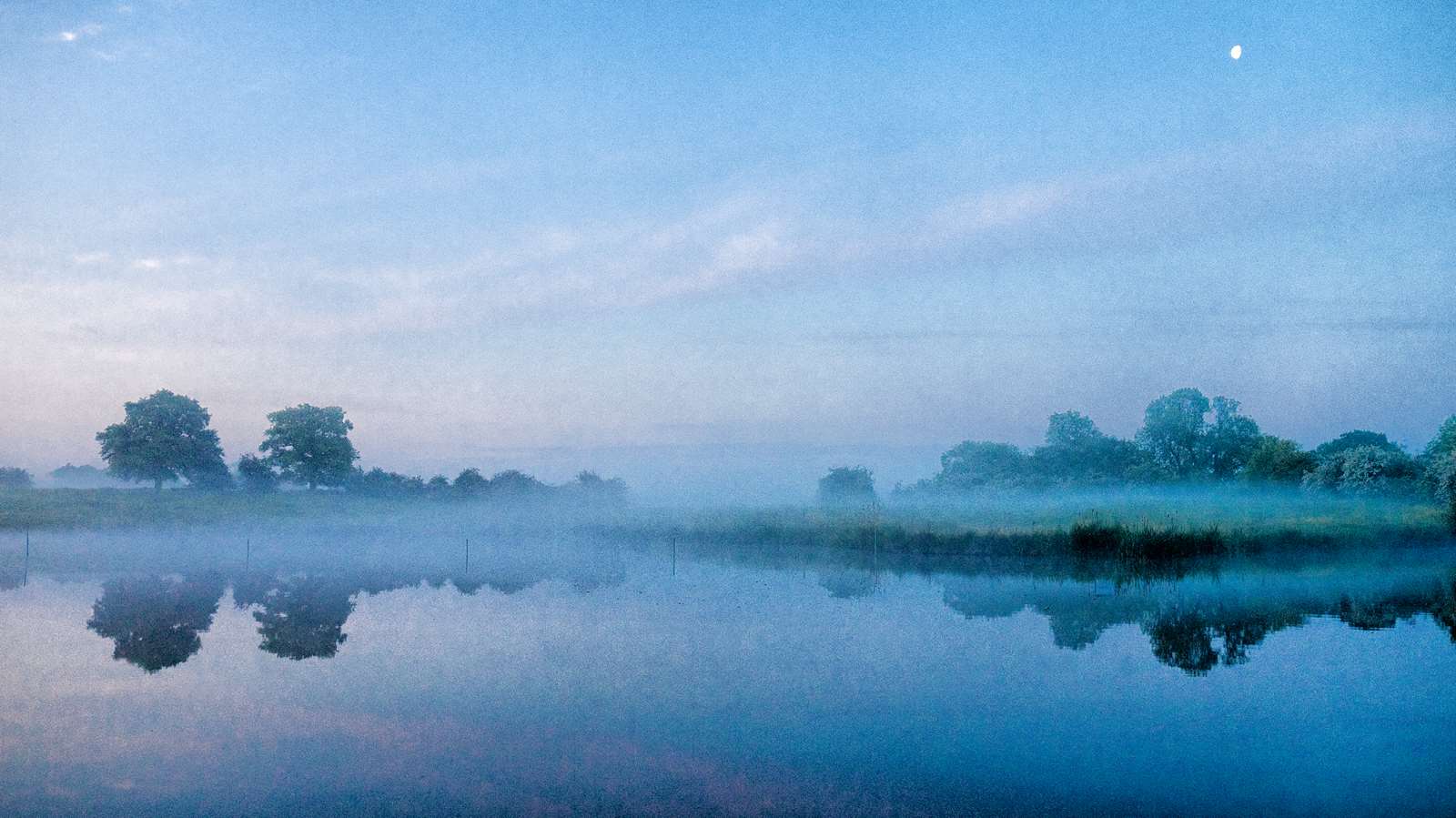 Misty morning on the Trent and Mersey

We were enormously grateful to be blessed with fine weather – every day was dry, making travelling more pleasurable.

By Friday lunchtime we arrived at the magnificent Anderton Boat Lift, and Barry walked to the office to book our descent.

He bumped into Tony and Heather, from The Fudge Boat. We’d not seen them since September 2015. They’ve been in New Zealand for five months and have recently returned. Sadly their travels didn’t match with a trip to Gisborne while I was there. Anyway, it was fabulous to see them again  – they ascended just before we went down, and moored up to trade for the weekend. 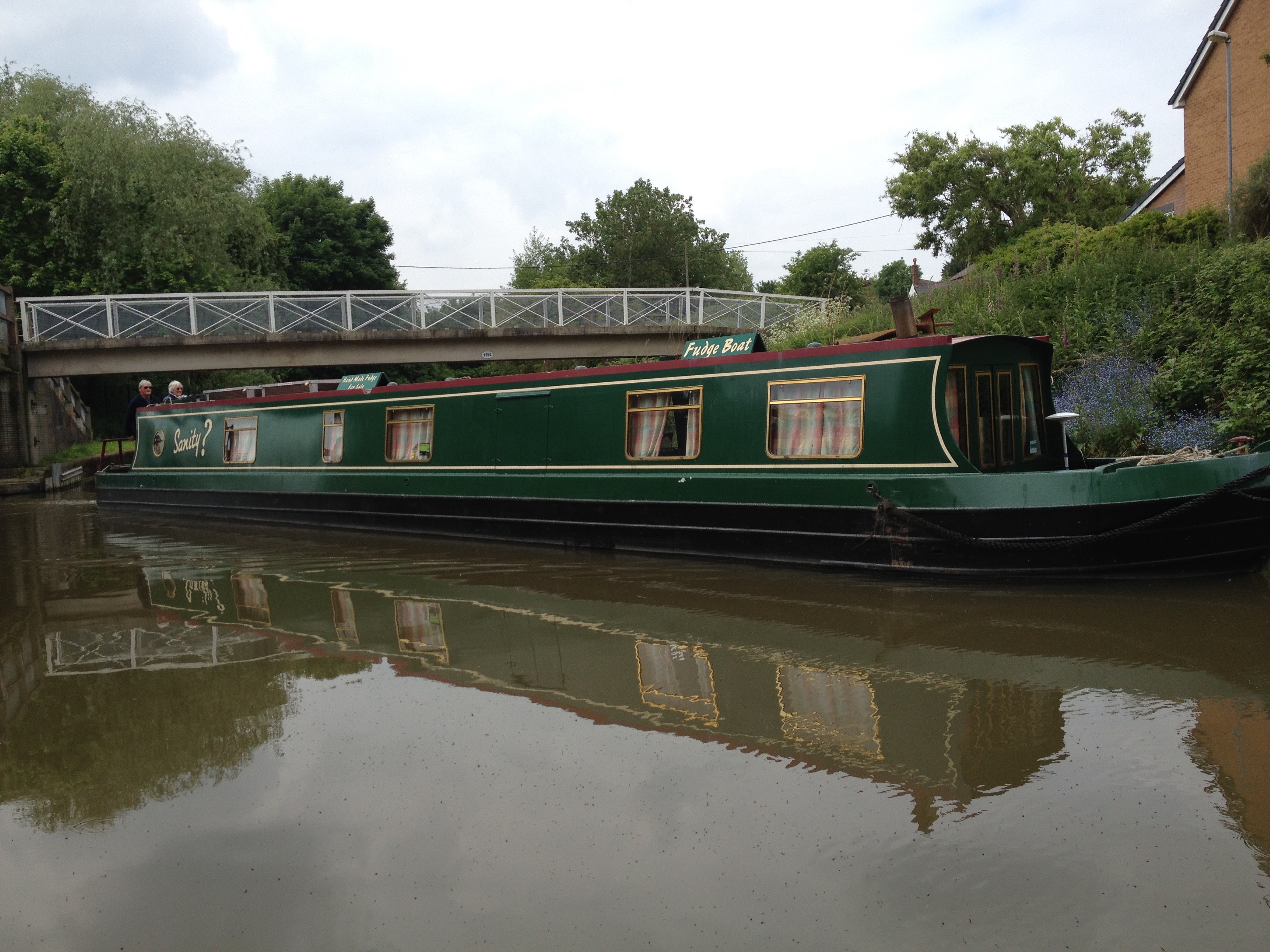 The Fudge Boat returning to the canal from the River Weaver 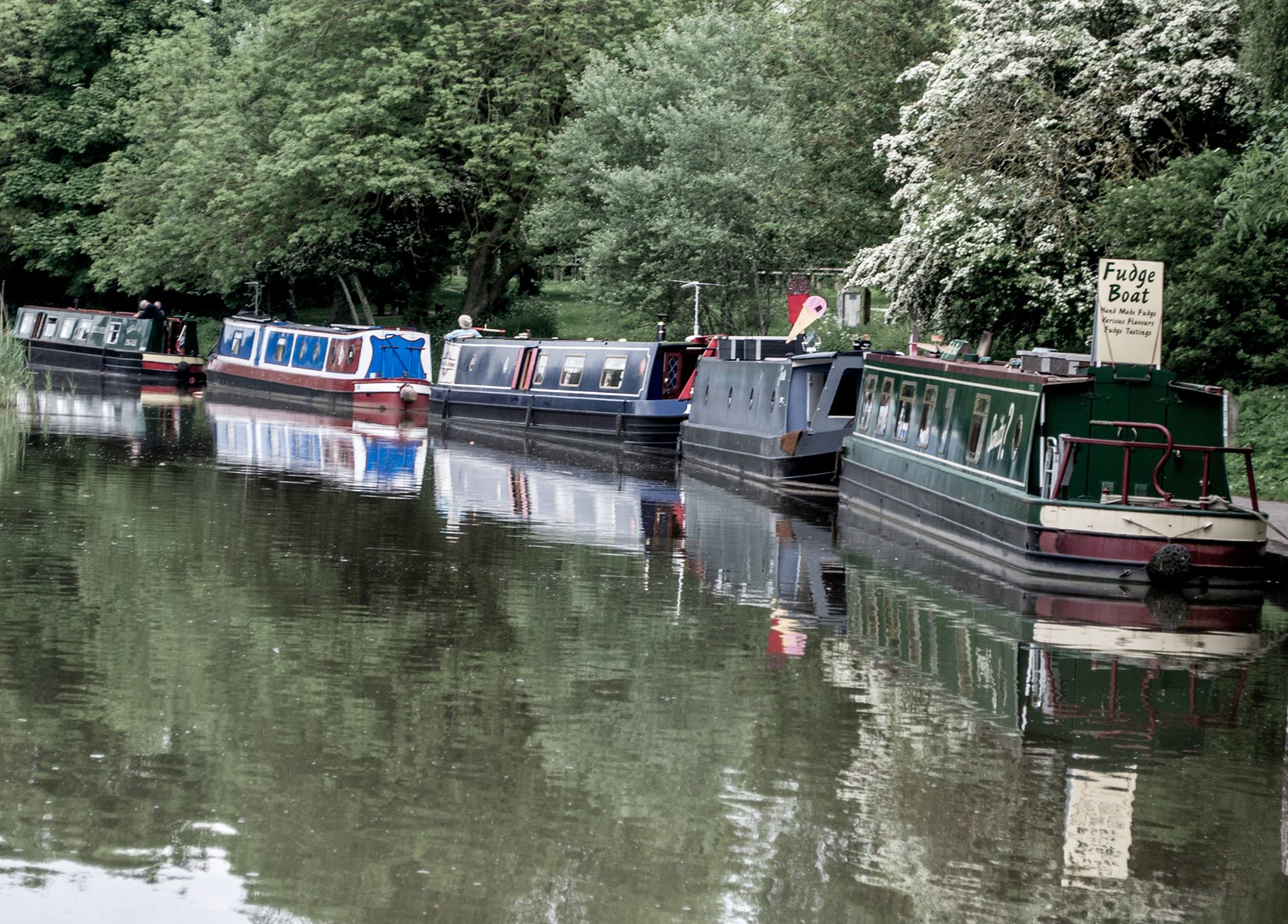 The Fudge Boat settled into their weekend trading space

We made it down and arrived at Northwich just in time to hop off and walk to the station to meet Viv and Ray on Friday afternoon. After a spot of grocery shopping, a cruise along the River Weaver led us to The Red Lion, where Ray had booked a table for 8pm. We moored up on their pontoon, the only narrowboat that evening. Not far to walk ‘home’ from the pub!

As it was Viv’s birthday, Ray treated us all to a meal. It sadly wasn’t a patch on the deliciousness of The Dragon at Willington, but it was passable, and the company more than made up for any disappointment of our taste buds. 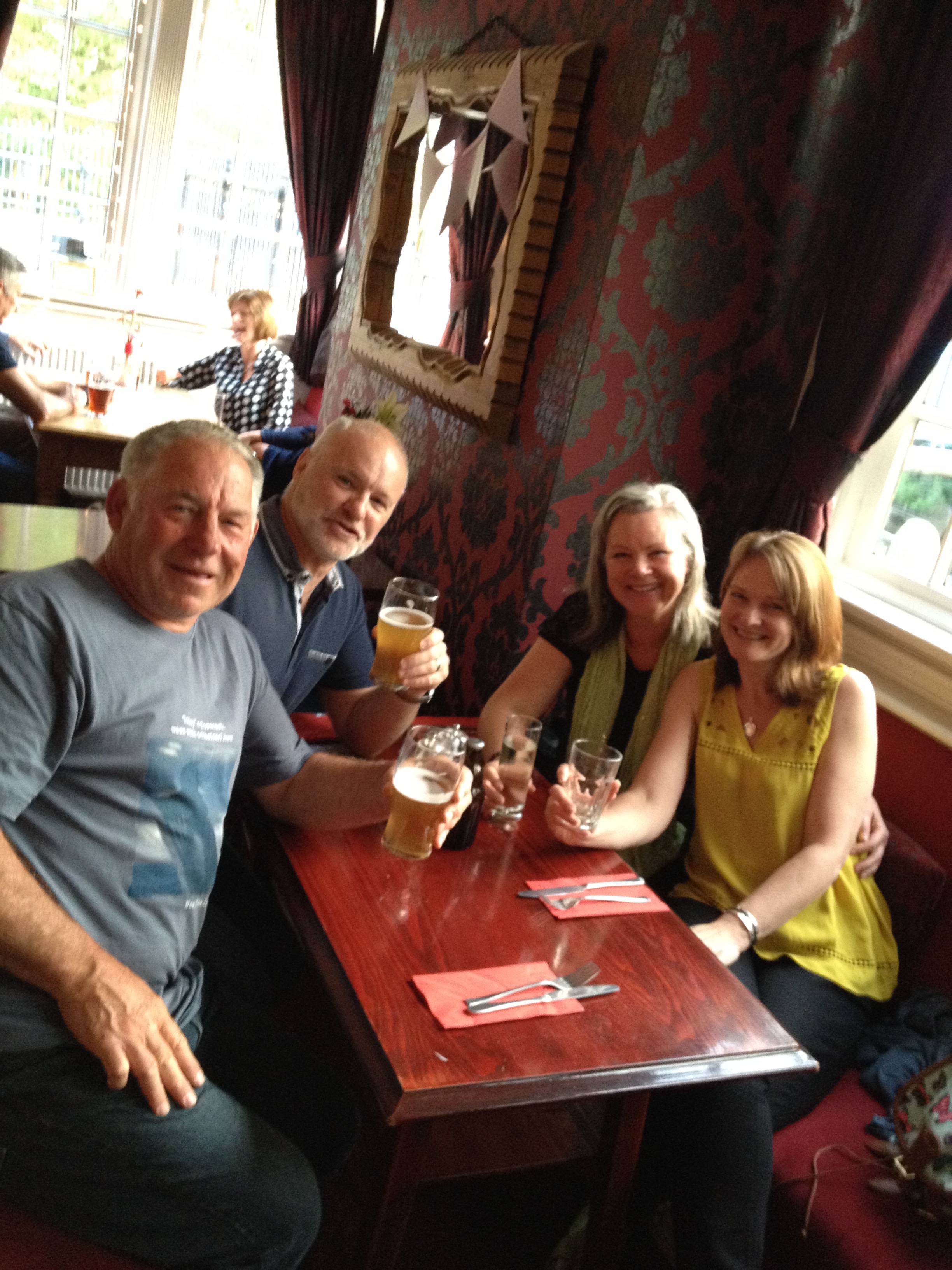 Cheers! At The Red Lion Winsford, celebrating Viv’s birthday. We also had our photo taken by the resident photographer, and it’ll apparently be on their Facebook page sometime this week

Letting the pictures tell the story …

Ray’s a keen amateur photographer, and loves spending time with Barry picking his brain. He too took some spectacular shots while with us.

The following’s a bit of a montage of Ray’s and Barry’s images, to tell the story of our Bank Holiday weekend … 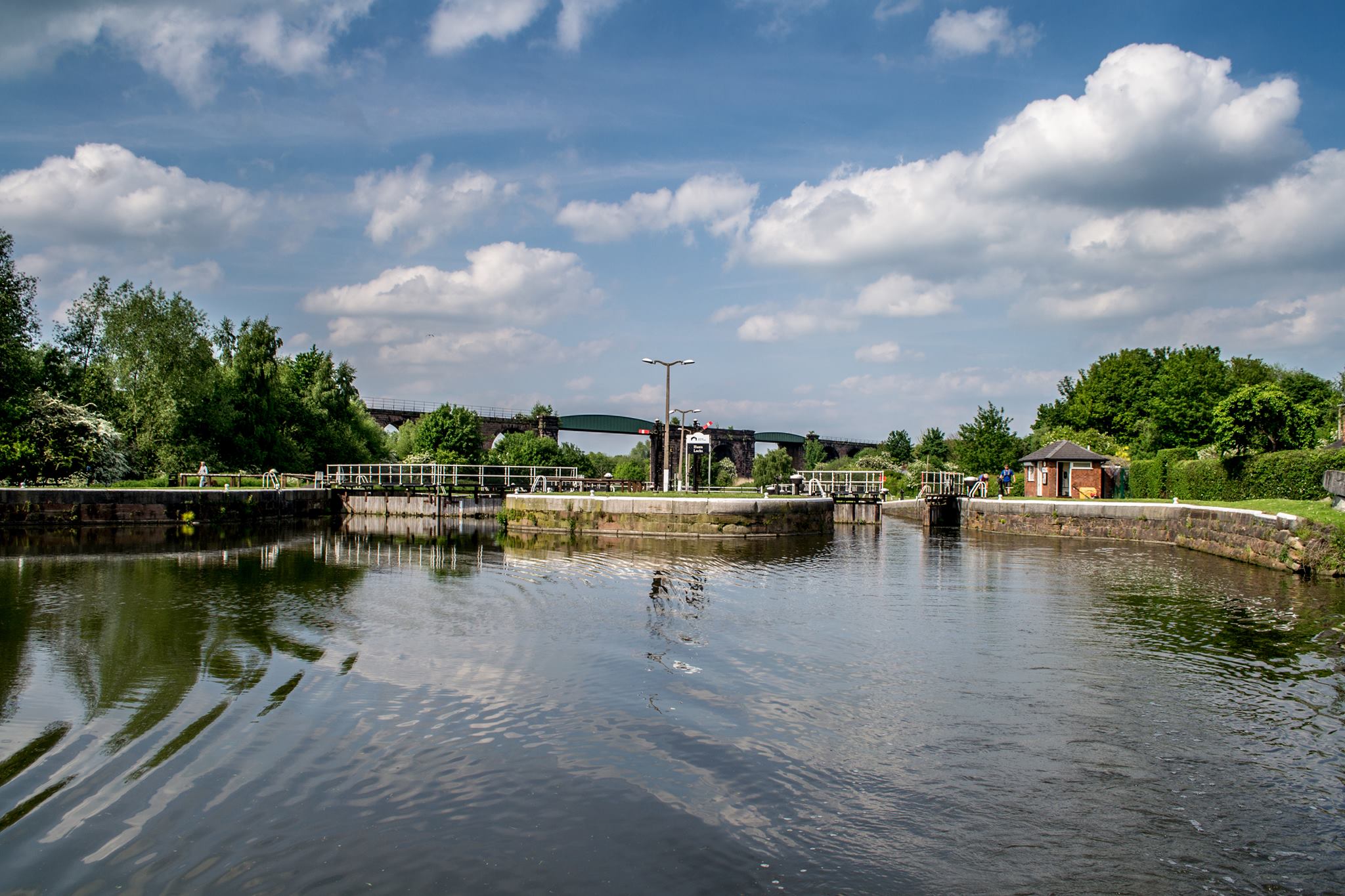 One of Ray’s – travelling back up the River Weaver on Saturday. One of the two massive locks we went through 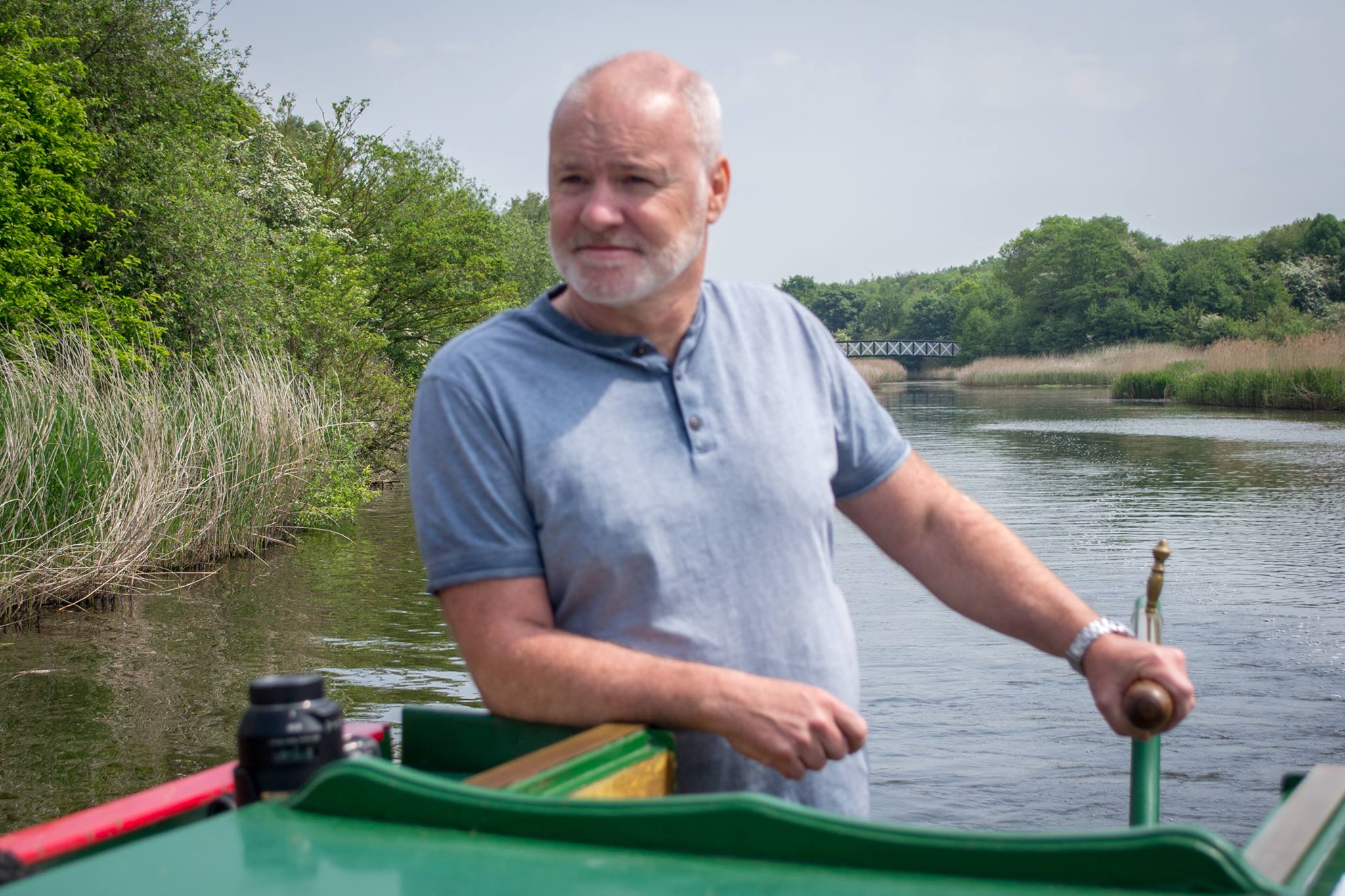 Ray looking comfortable and confident at the stern 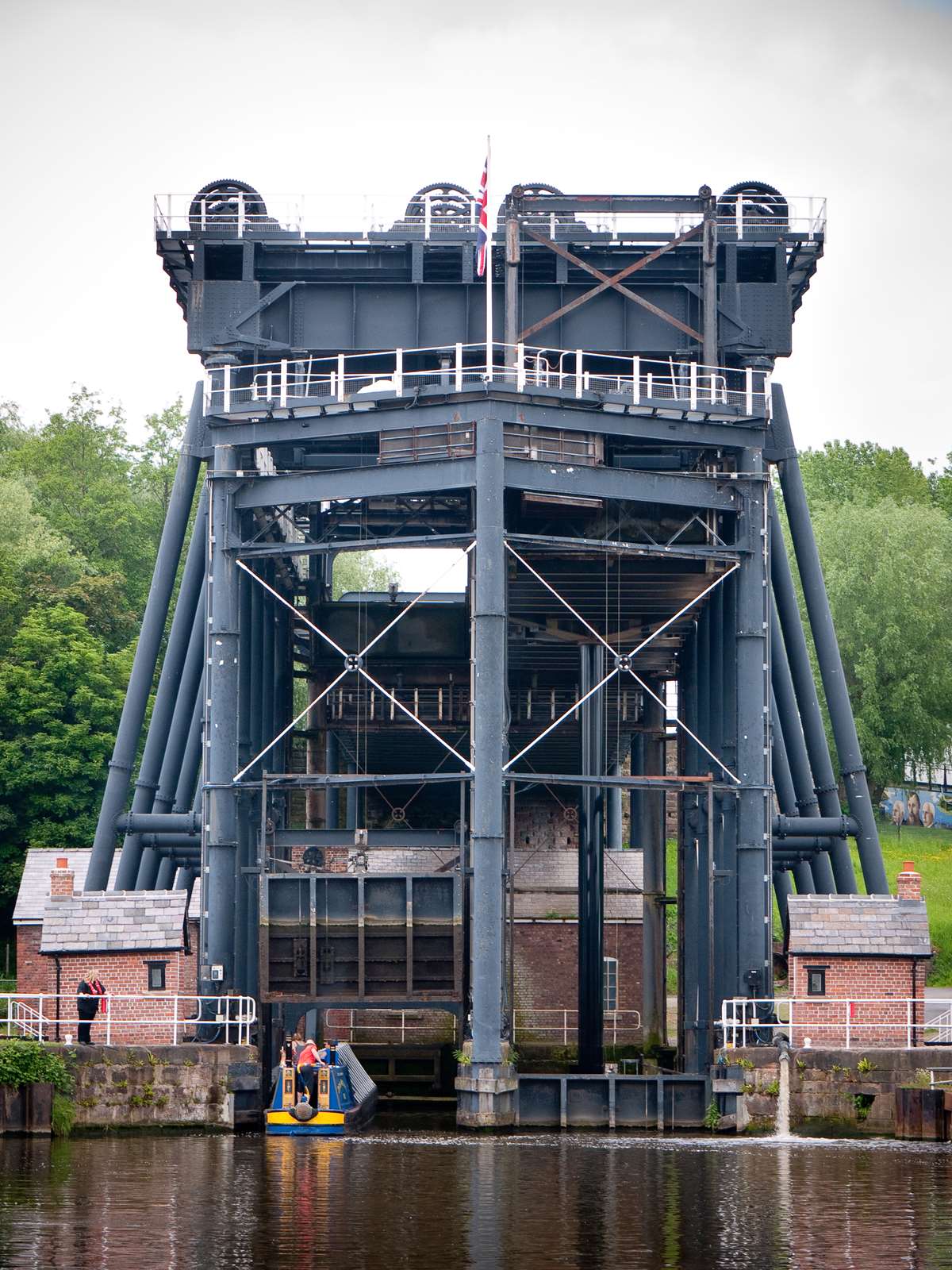 Ascending the Anderton Boat Lift – we arrived around 12pm, but weren’t able to secure an available cassion until 2.50pm. We’d have booked ahead, but it costs £5 to do so. Just the luck of the draw, it delayed our plans for the day somewhat … 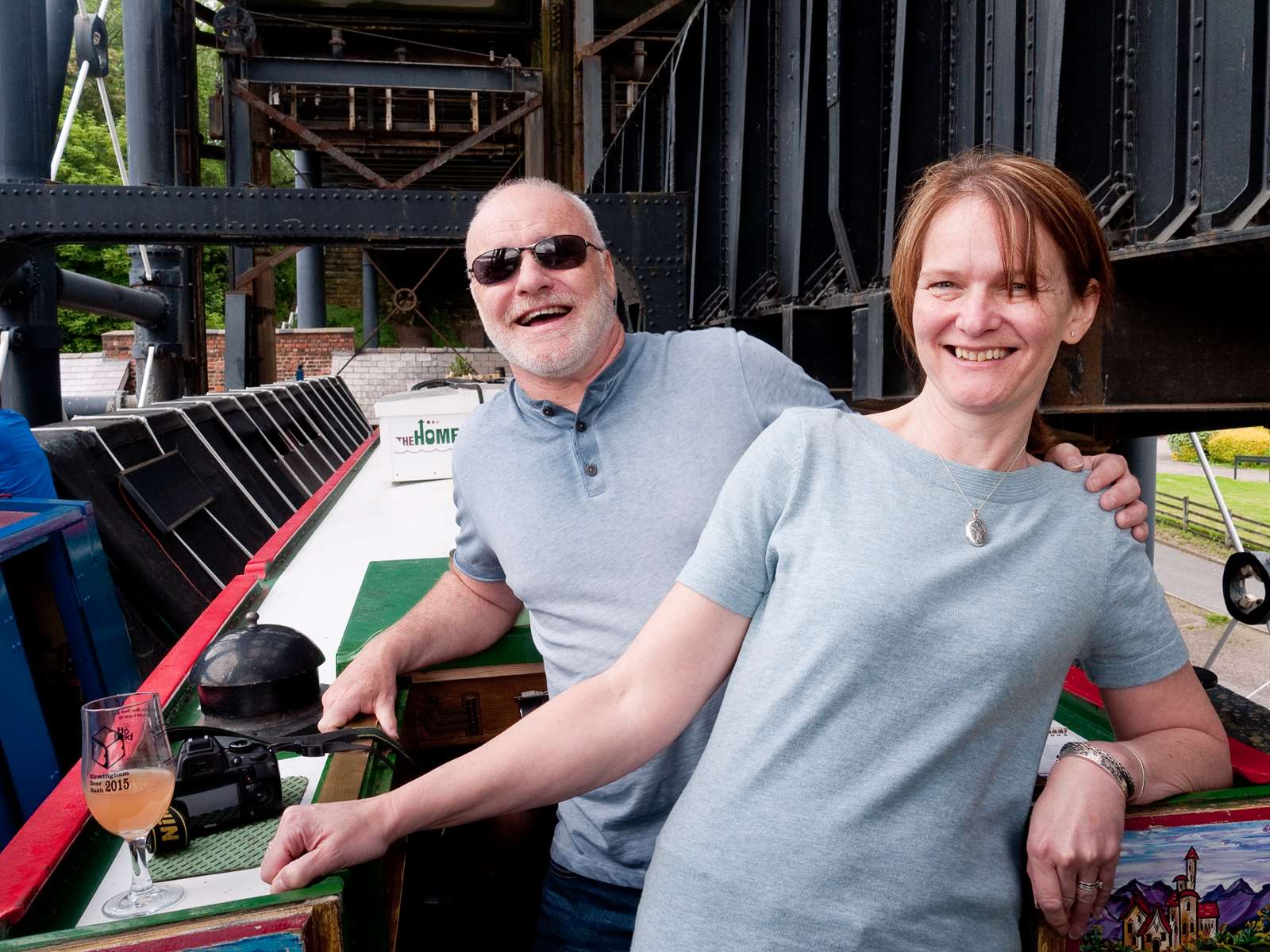 This has to be one of Barry’s! 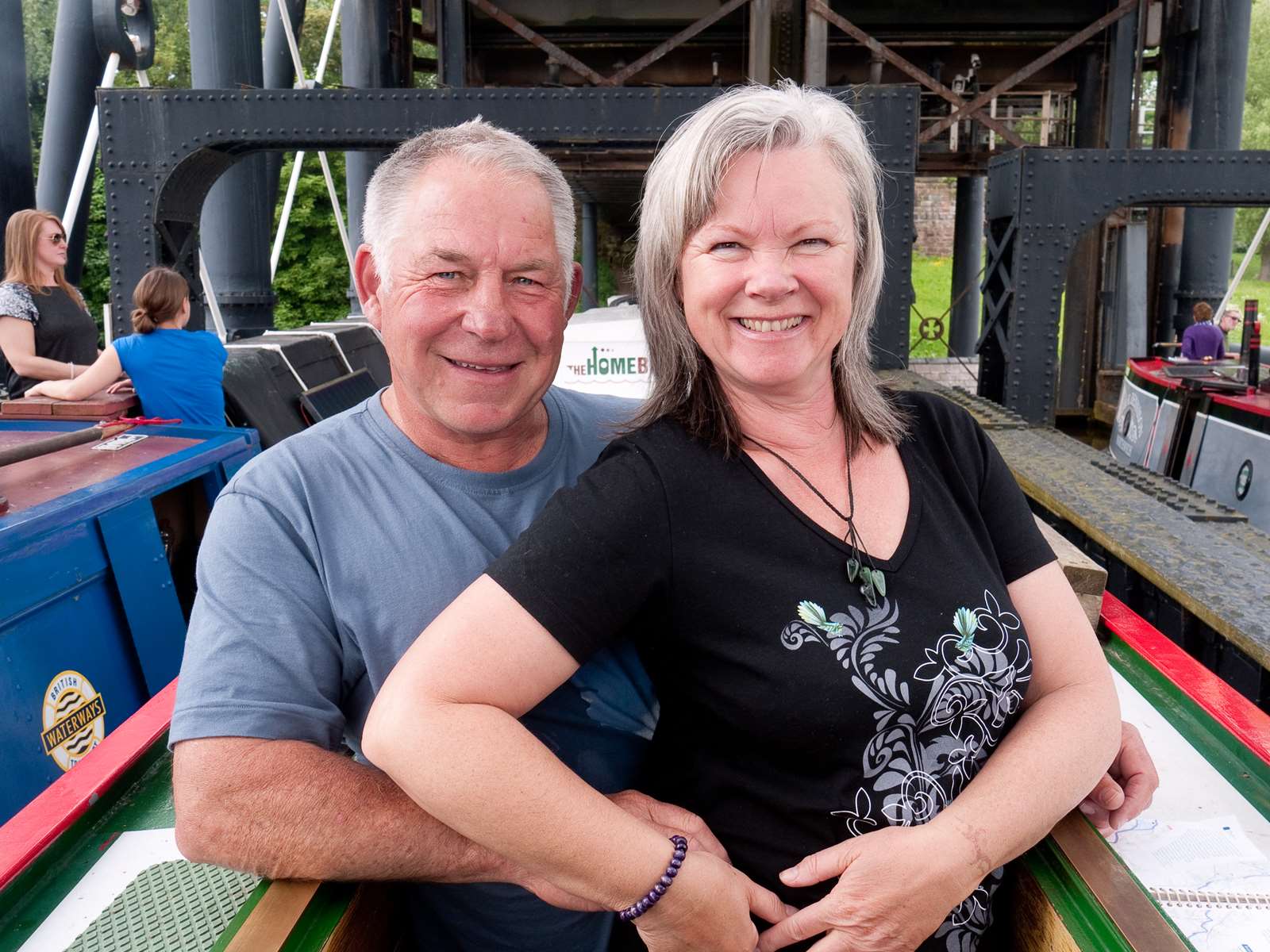 And obviously one of Ray’s …

Saturday was a painfully slow day. In addition to a delay at Anderton, all three tunnels we arrived at had boats coming the other way, or we had to wait until the correct time for passage.

We’d hoped to get to Lymm Saturday evening, instead we settled for a mooring at a secluded country spot and enjoyed an evening on board playing our favourite card game Six-handed Rummy. 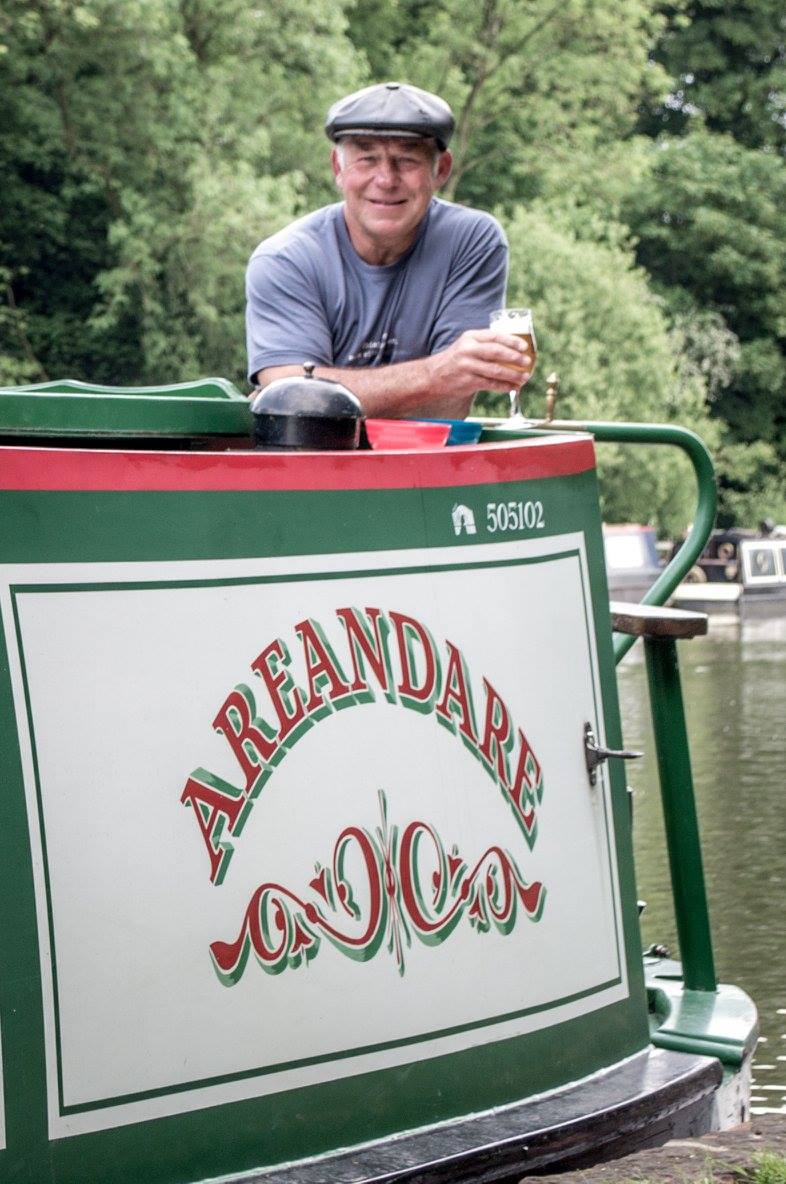 Sunday started fairly early, and we made it to Lymm for lunch, then cruised a little way further for a walk to the delightfully decadent Dunham Massey. Once again we arrived there too late to check out the inside of the mansion – the same thing happened in 2013 when we came with our NZ friends Kerry and Tony, and Rivka and Richard. 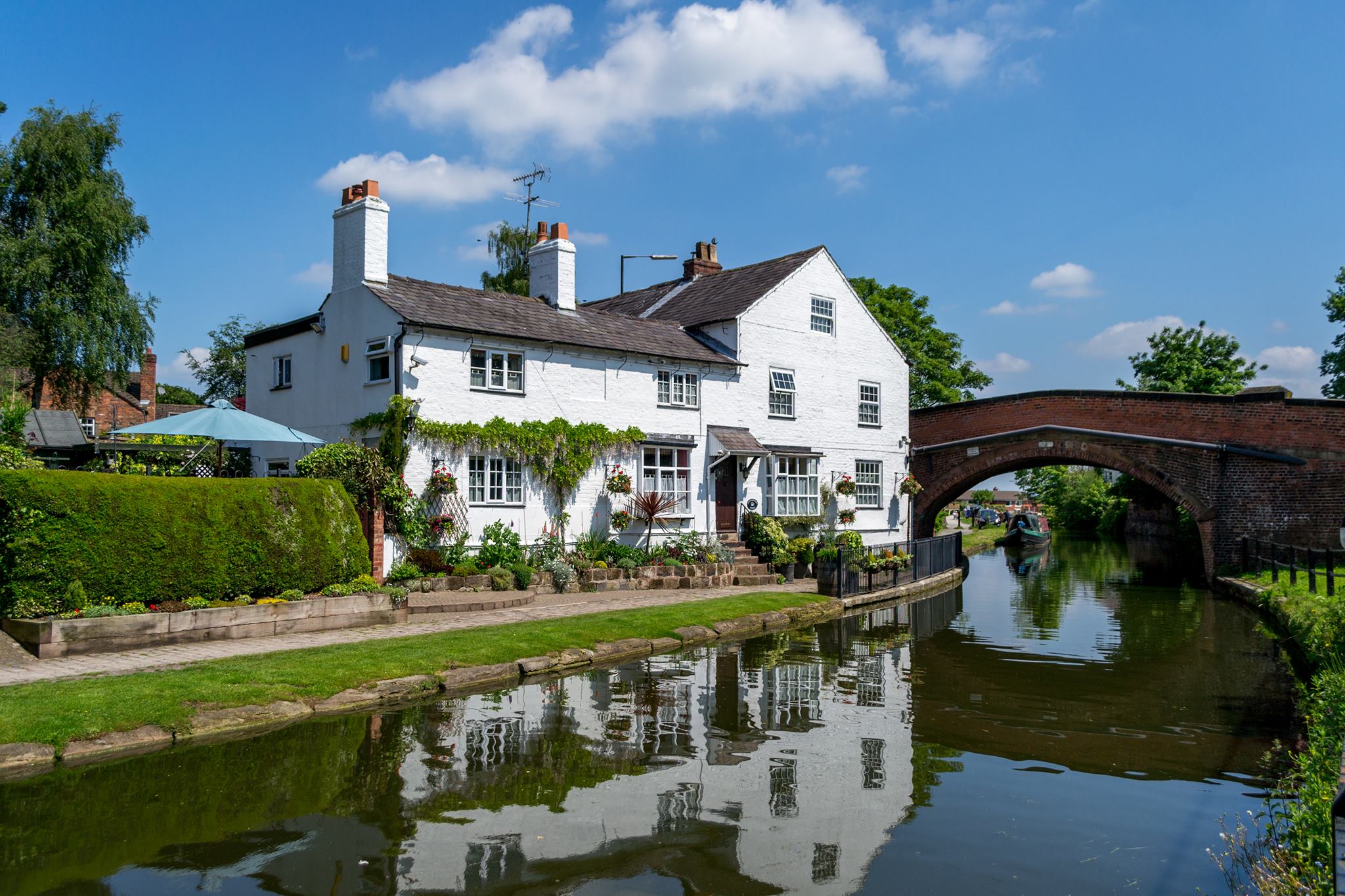 One of Ray’s – leaving the very attractive village of Lymm 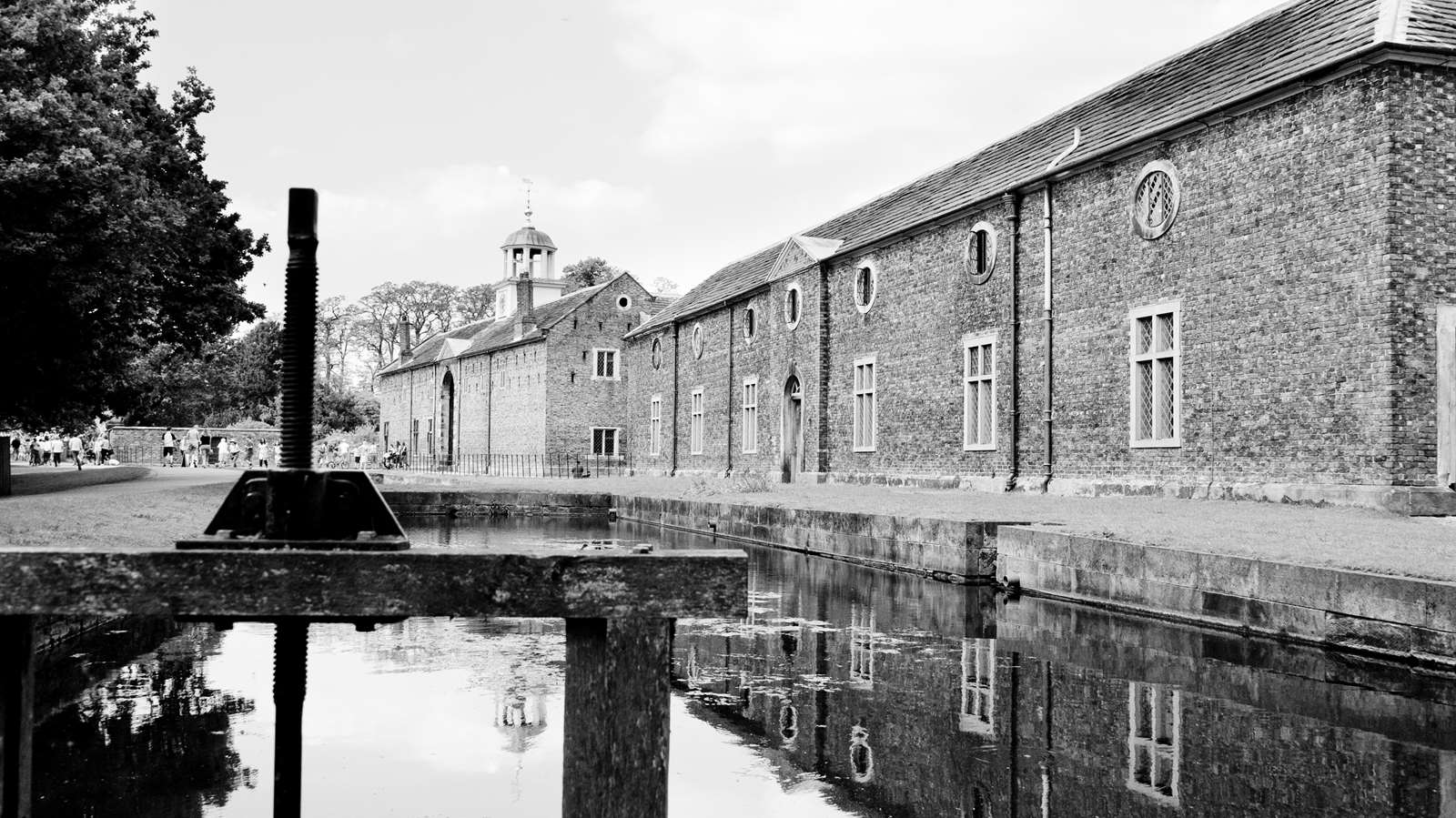 The stables and barns at Dunham Massey (by Barry) 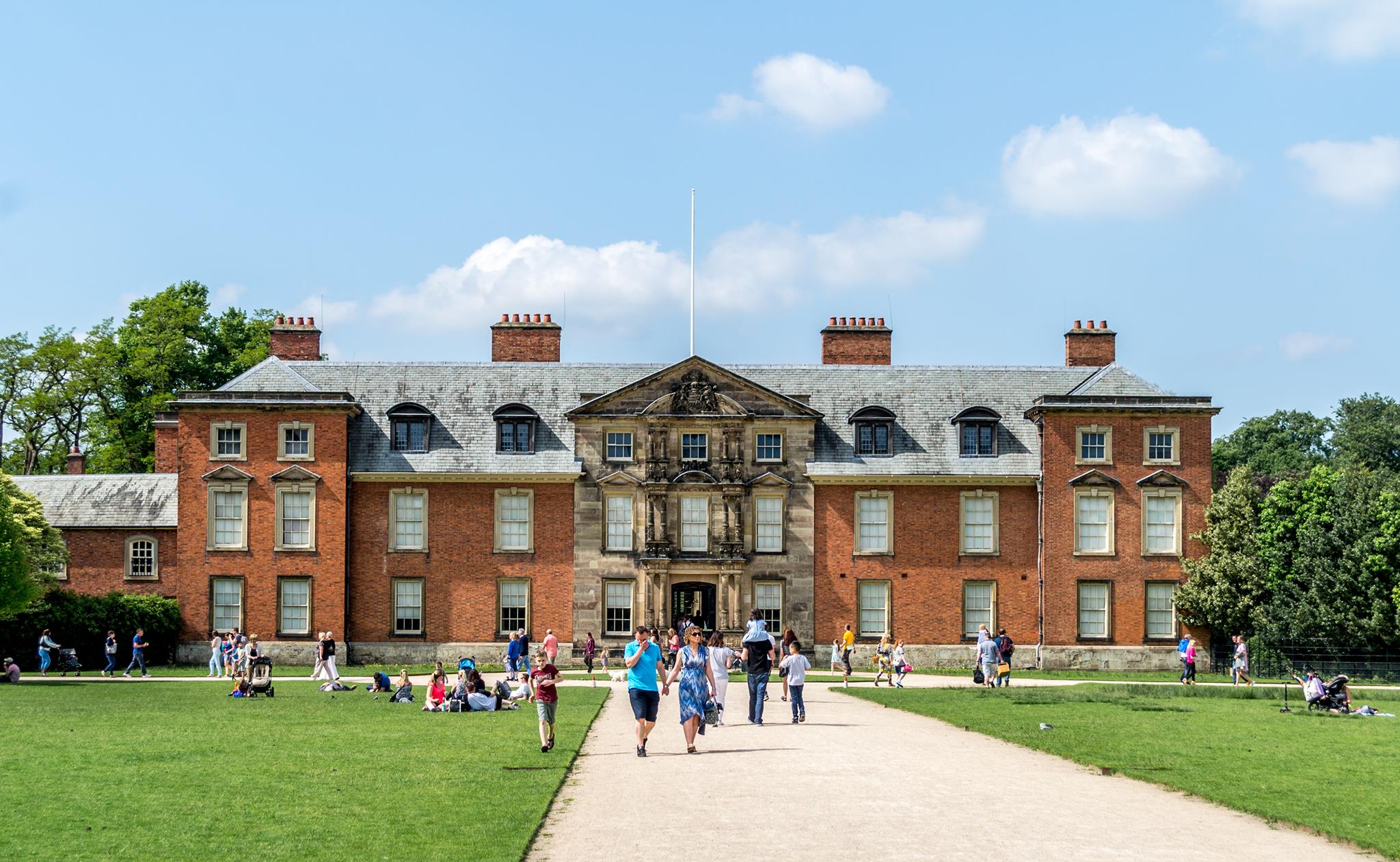 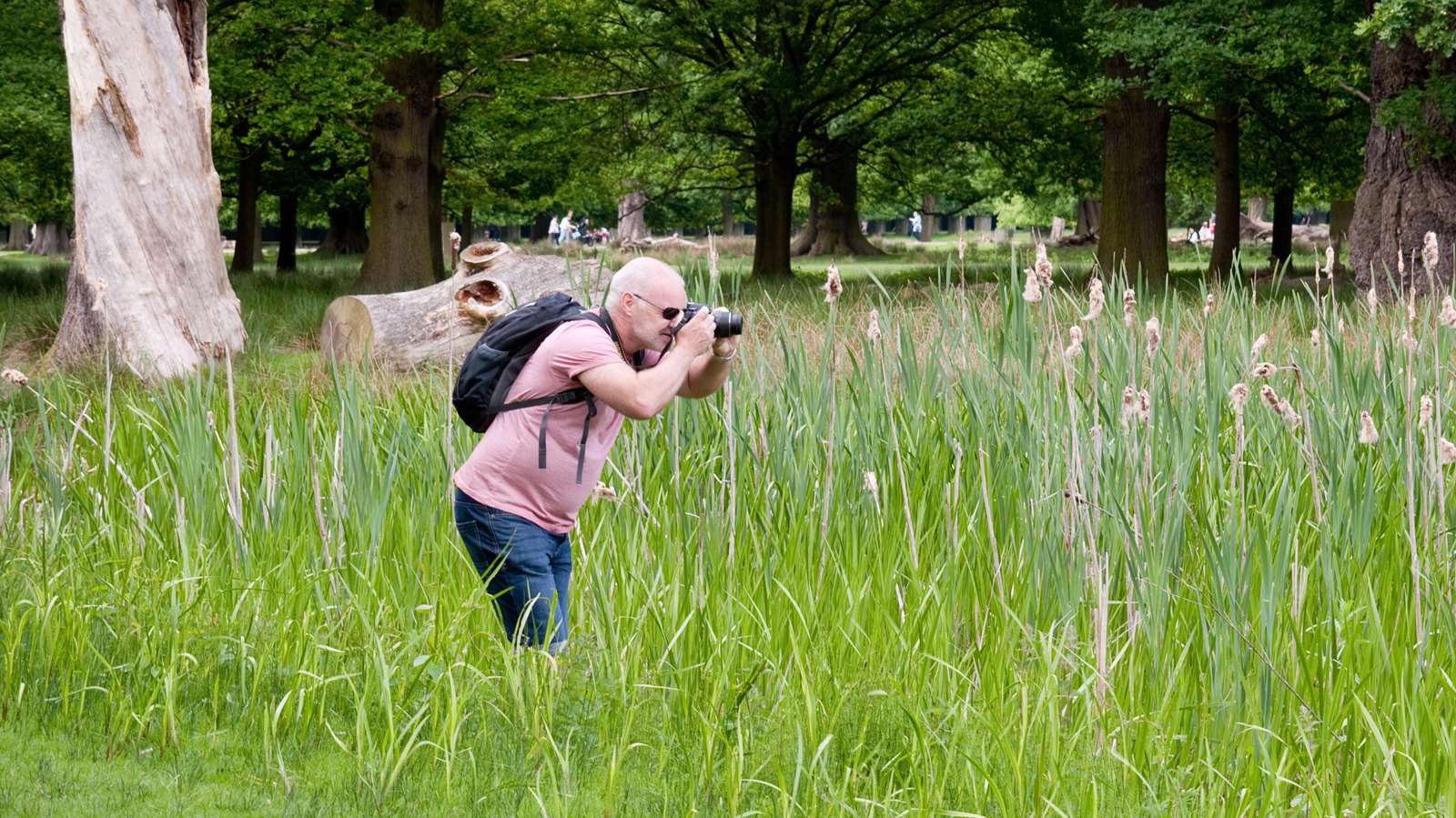 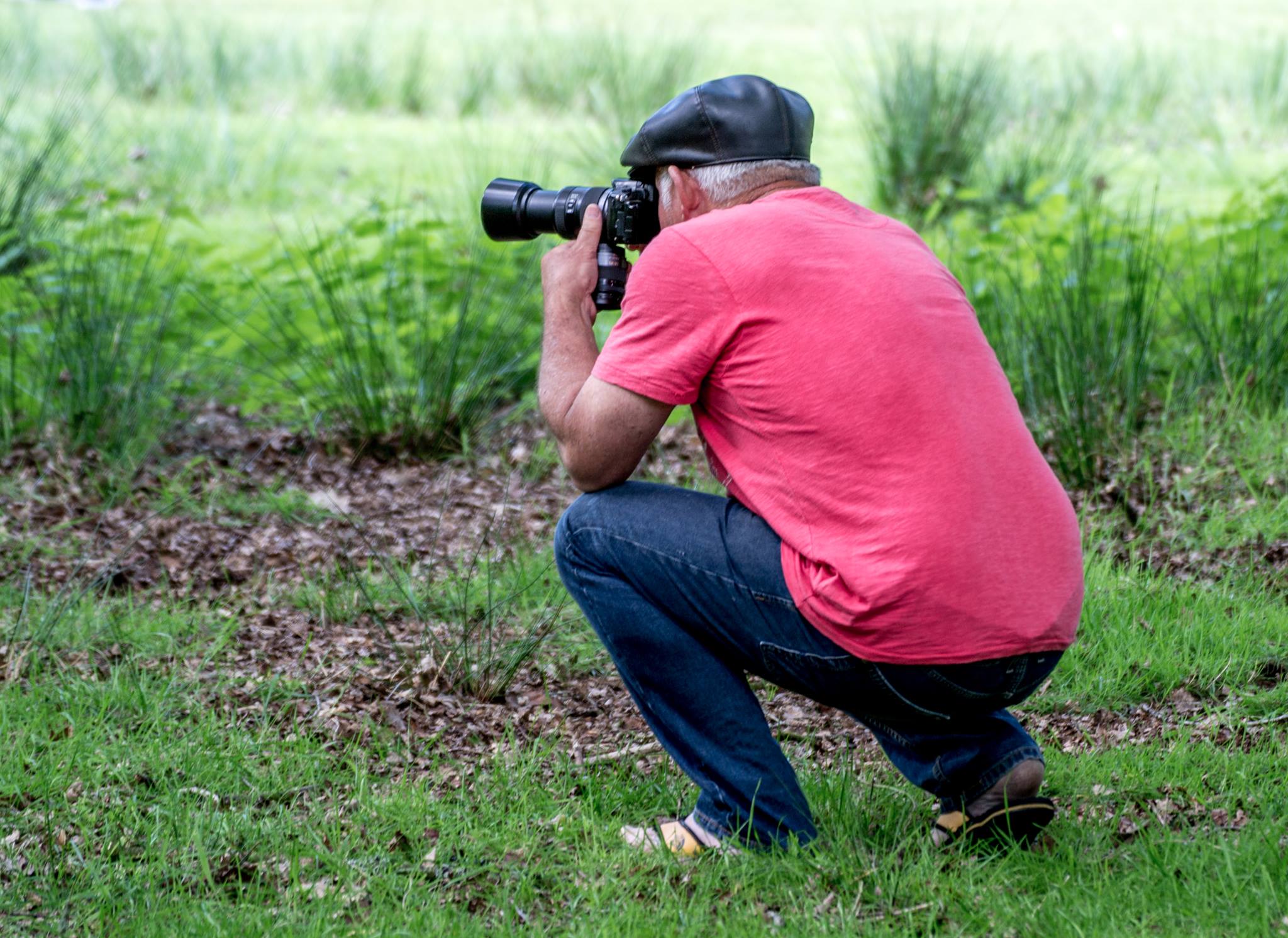 Barry strikes a pose too – captured by Ray! 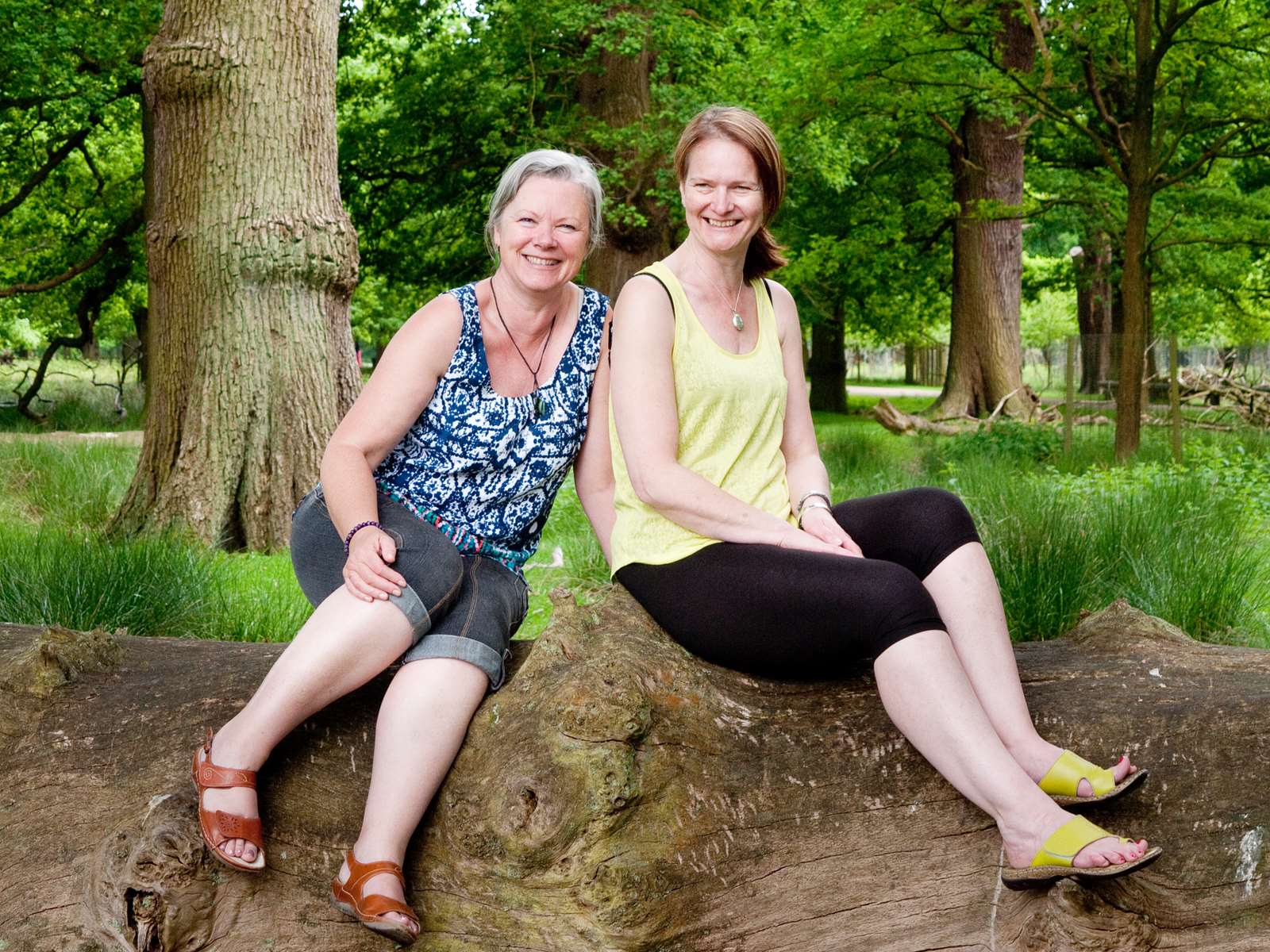 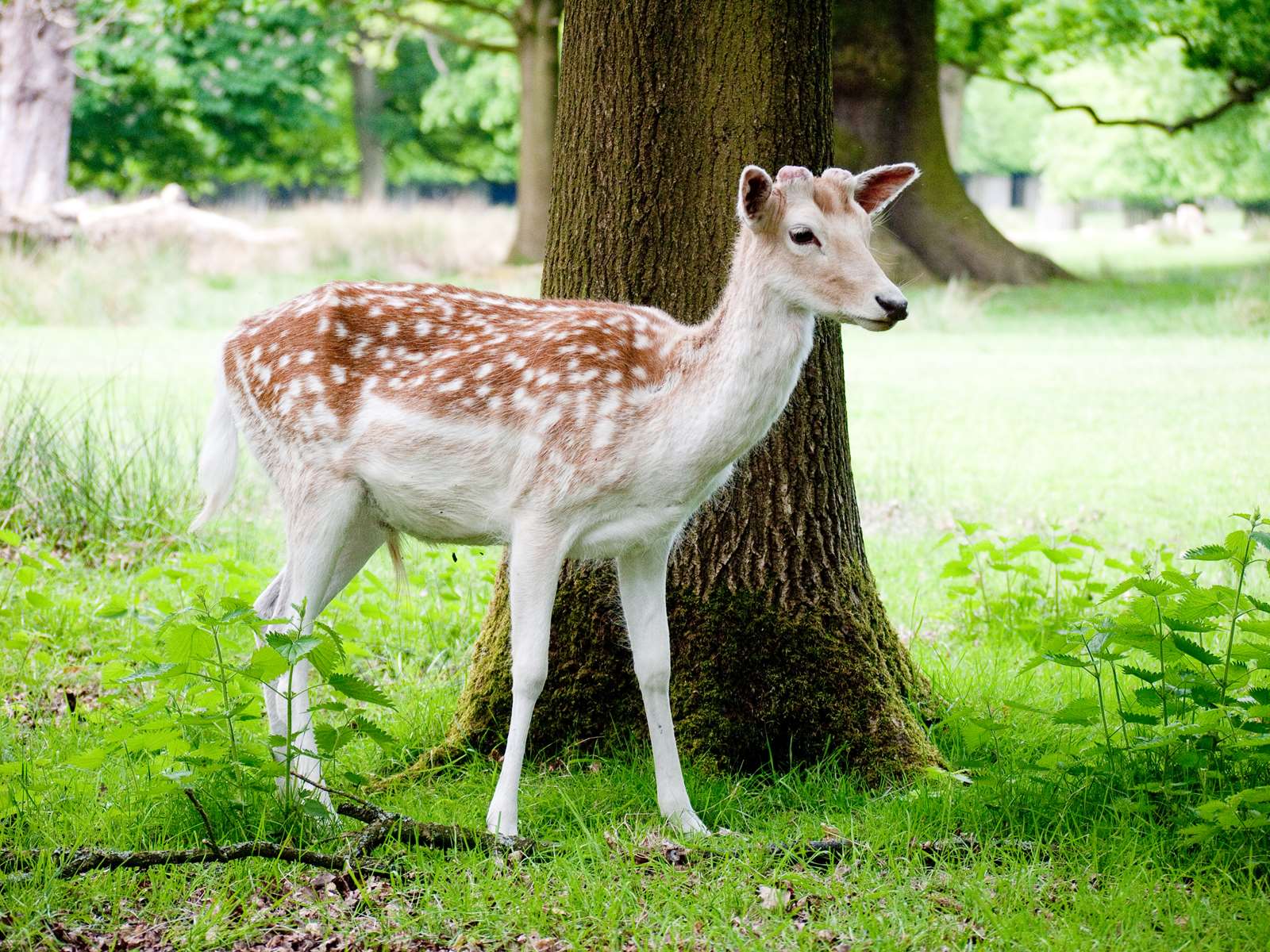 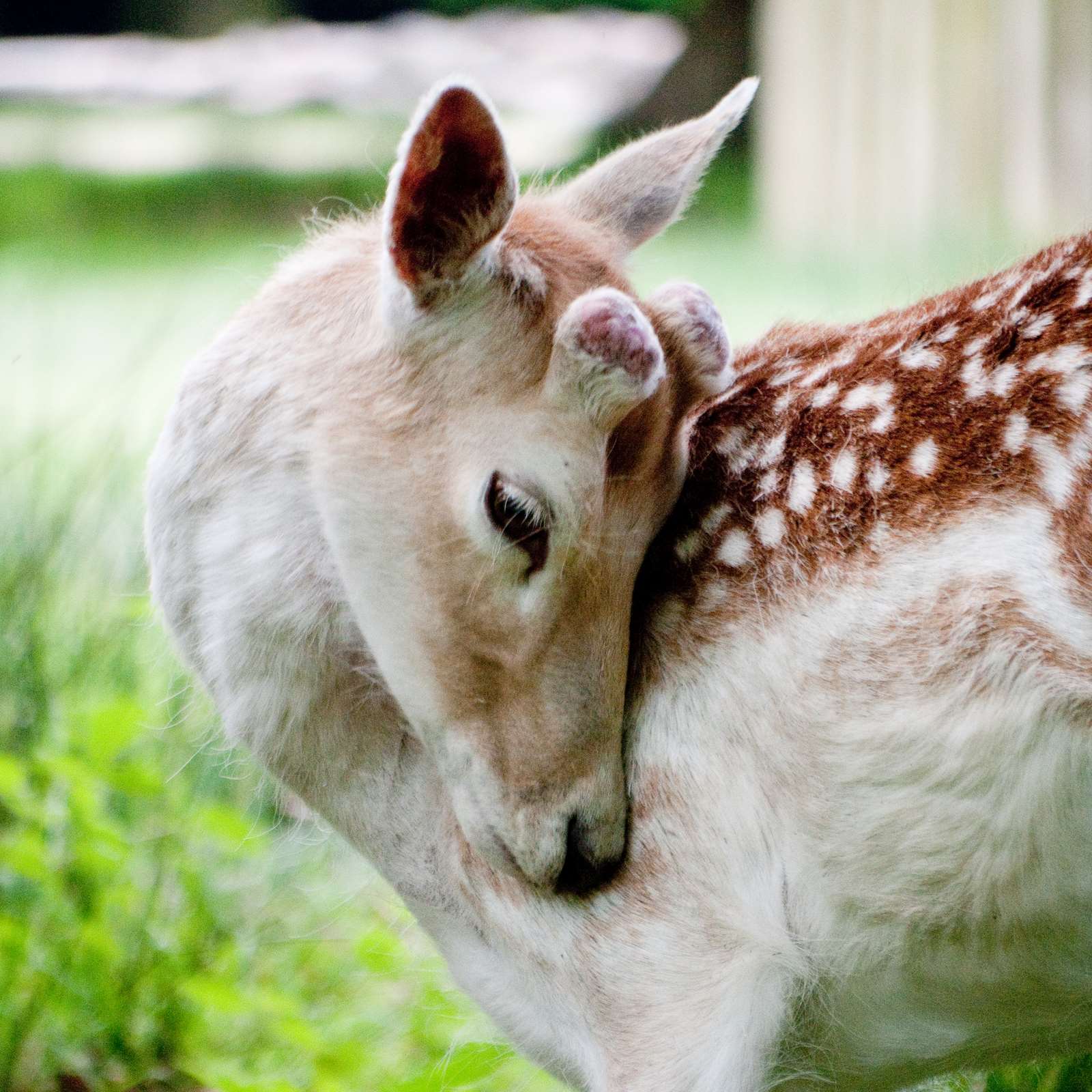 Looks so gentle (by Barry)

Making it to Manchester on time

Well sort of – we’d hoped to arrive a little sooner than we did so we could show Viv and Ray around. They’ve not visited the city before. After making and eating our Sunday lunch at around 8pm, it was 9pm before we headed into the bright lights. 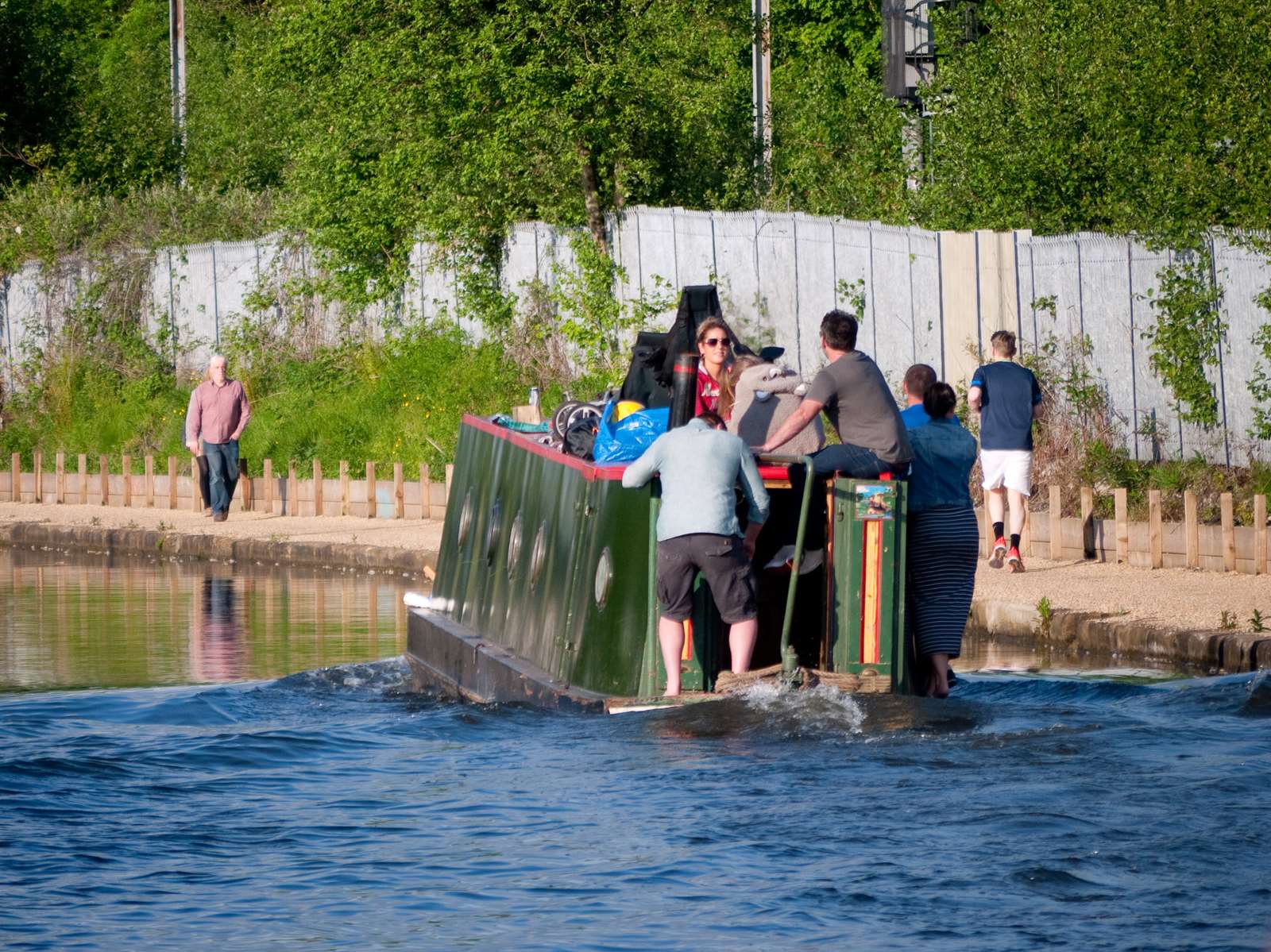 A day boat rather overladen with passengers at the stern close to Manchester – it looked as though they were almost in the water, never mind the wash that followed them. They seemed to be having fun though (and somehow escaped unscathed!)

It felt as though the city had degenerated a little since we were last there. The lovely ‘water feature’ I loved  in the centre was awash with rubbish and bone dry, litter was in abundance on the streets, and some rather brave women were walking around half naked!

Maybe we’re just getting too long in the tooth now. We decided that a Bank Holiday weekend would have encouraged people to be a little more reckless than usual.

By the time we found a pub looking appropriate for our needs, it was last orders (10.15pm), so unless we wanted to try our luck getting into a nightclub (what a dreadful thought), we headed back to the boat and saved our pennies.

Monday morning Barry took them to the fascinating museum a short walk away, while I packed for my impending travels around the country. At least it felt as though they’d seen a bit of the culture of the city we’ve grown to love on our numerous visits.

Viv, Ray and I, left Barry on Monday lunchtime. He’ll be heading up to the Leeds Liverpool Canal for our next trading weekend on 11th and 12th June, the Eldonian Festival.

I’m now with my grandsons until Friday, then catching a couple of trains south to Droitwich, picking up my mum’s car there and heading down to Wimborne St Giles in Dorset for Colourfest. It’s a yoga inspired festival and I’m volunteering for the weekend. I’ll be doing two four and a half hour shifts, for which I get a free ticket, a car park pass, and a meal each day. It’s my ingenious way of being able to afford to spend a weekend camping and chilling with my younger daughter Kim.

After that, I’ll be heading to Brighton with Kim for two nights. I’m ecstatically excited she’s managed to get us tickets to go and see the ‘Modern Maori Quartet’ on Monday night, fresh from their recent tour of New Zealand. They sound amazing:

“This will be Modern Māori Quartet’s first tour to the United Kingdom, where the self-styled “Māori Rat Pack” will present their signature cabaret show, An Evening with the Modern Māori Quartet, at the exceptional London classical music venue St John’s Smith Square on 3 June, followed by the iconic Norwegian Church Arts Centre in Cardiff on 5 June, and at premier live entertainment venue Komedia in Brighton on 6 June, before heading on to the Salisbury Playhouse for their Salisbury International Arts Festival showcase on 9 June.”

I’ll leave Kim’s on Tuesday 7th June, travel back up to mum’s for a couple of nights, before heading back to Barry and the boat late next week. He’ll be somewhere near Liverpool, a location I can catch a train to, that’s yet to be decided!

6 thoughts on “Family on board from Winsford to Manchester”