Returning to Mercia Marina last week, for their first Floating Market, produced many more magical memories for us.

Shortly after mooring up on the trade boats pontoon, at almost the same spot we spent November and December 2015, there was a knocking at the canalside kitchen window. We like to believe the playful swan  attracting our attention was the same one we got to know last year.

She saw us and wanted to show off her cute cygnets … 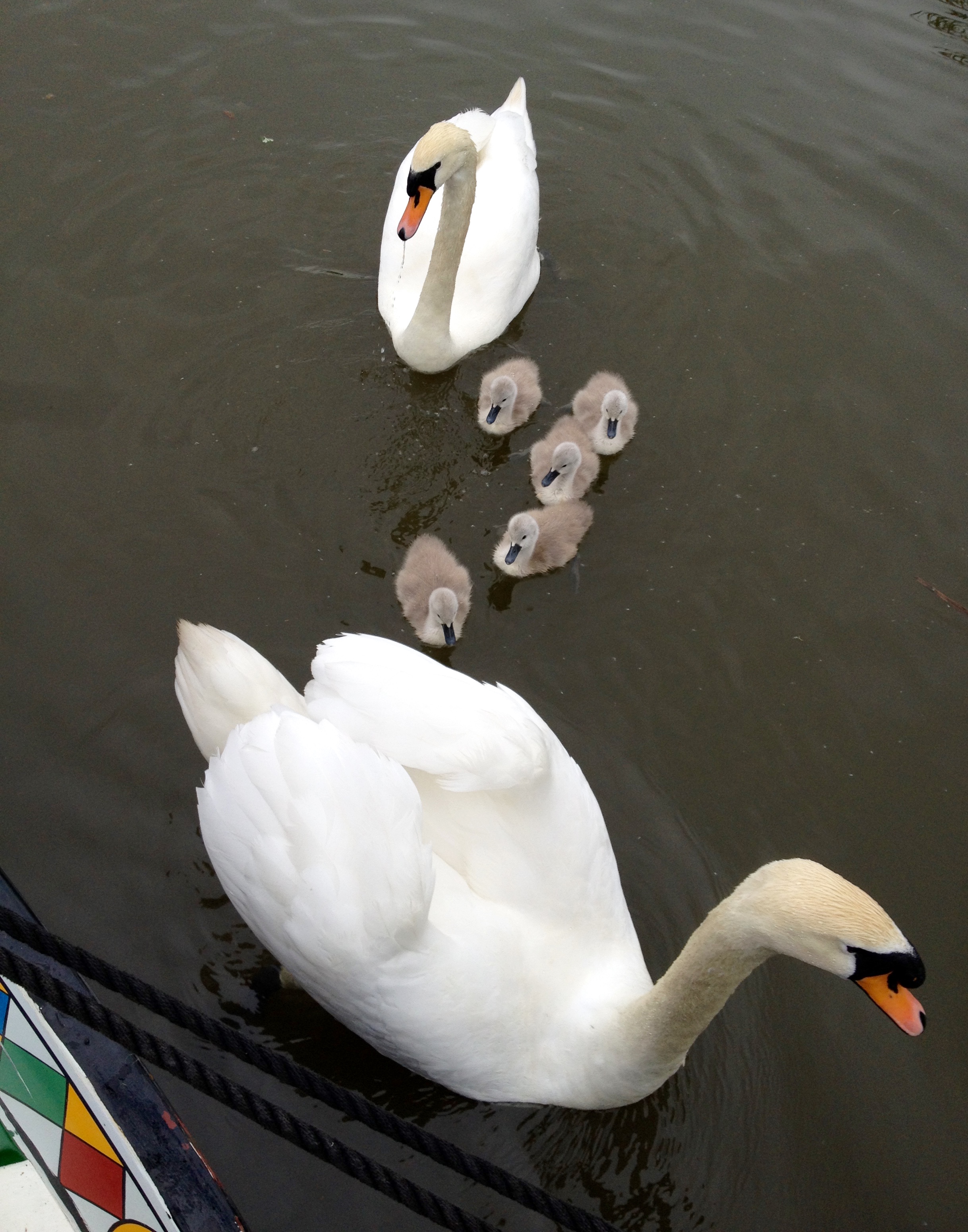 Mum and dad proudly introduce us to their family 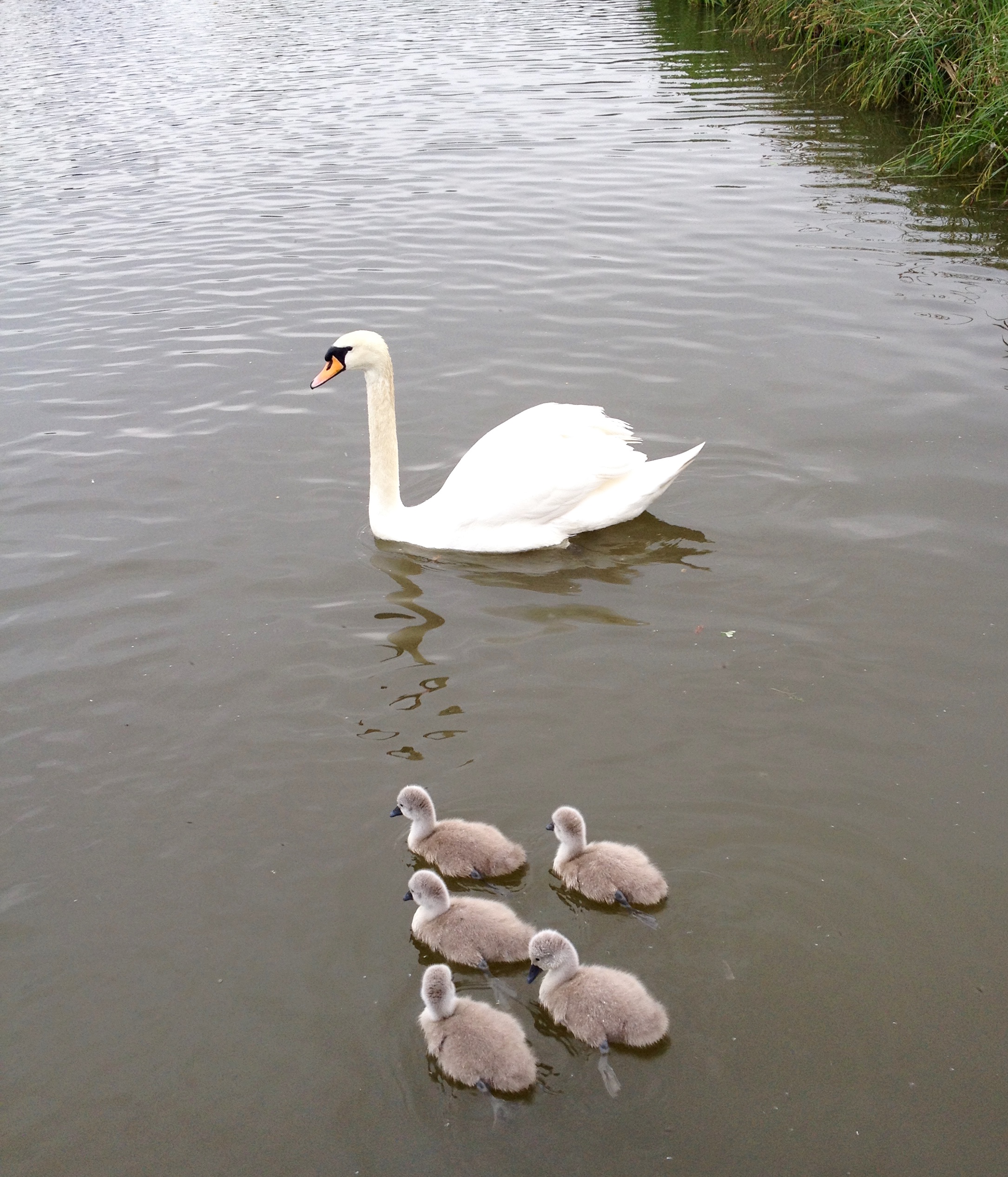 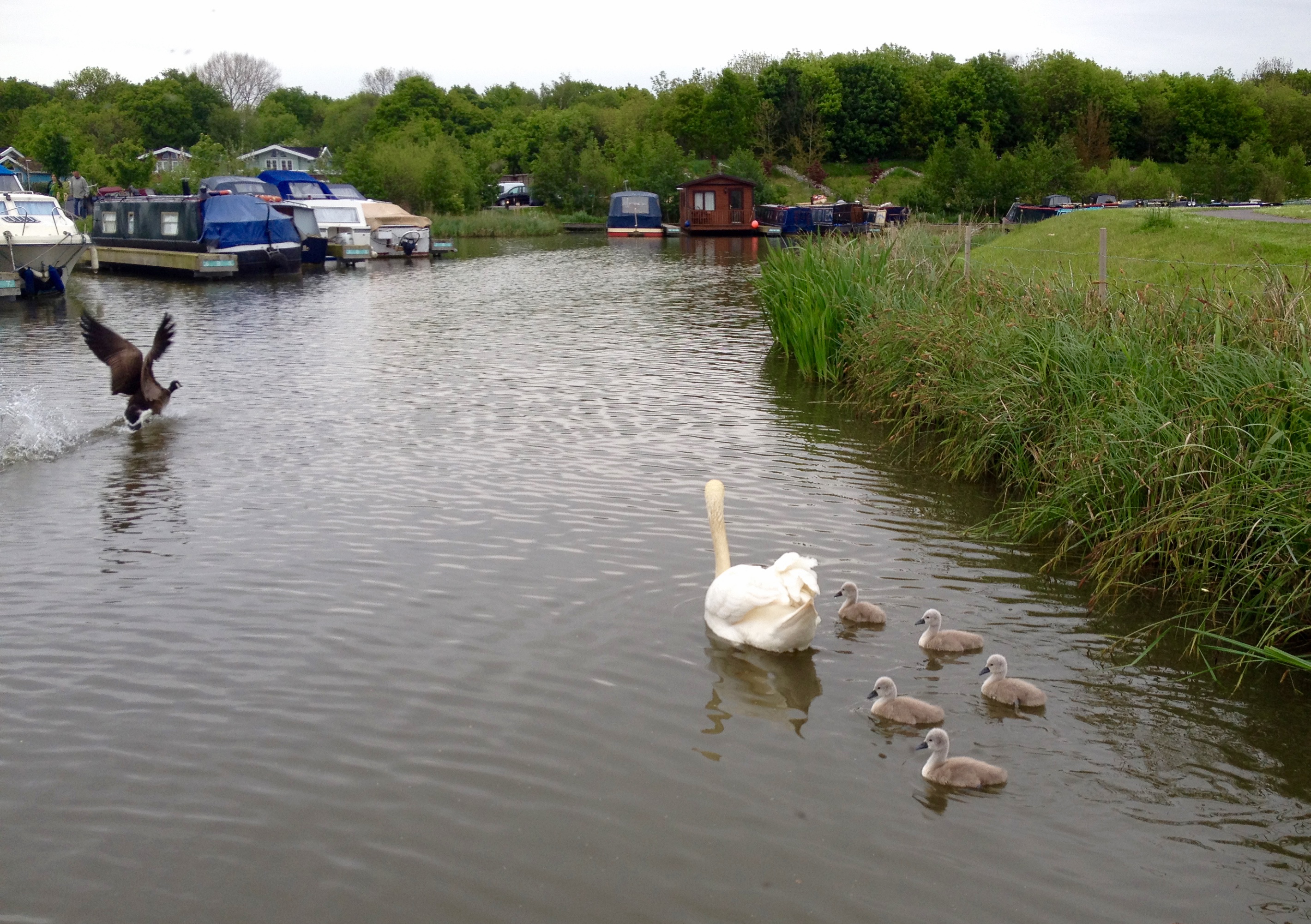 Boaters bravely thinking outside the box

First time floating markets are always interesting. You never know what the logistics will be for the moorings, or the successful ability to showcase your wares.

We’d all sent in our boat lengths and how we trade to Tony at Mercia Marina, and he’d allocated pontoons accordingly. On arrival we felt fortunate to have been given a spot on the trading moorings, along with Sandra and The Doggie Boat, as the pontoons there are a little wider than the berths below The Boardwalk.

We squeezed into a space near the one we had in 2015. Narrowboat ‘Wanderlust’, currently in residence at Mercia were comfortably settled in our previous spot behind ‘The Mug Tug Too‘. Magda and Wanderlust organised an Art tour in 2015 with Jan Vallance and The Art Boat, who featured in last week’s Trading Tale. 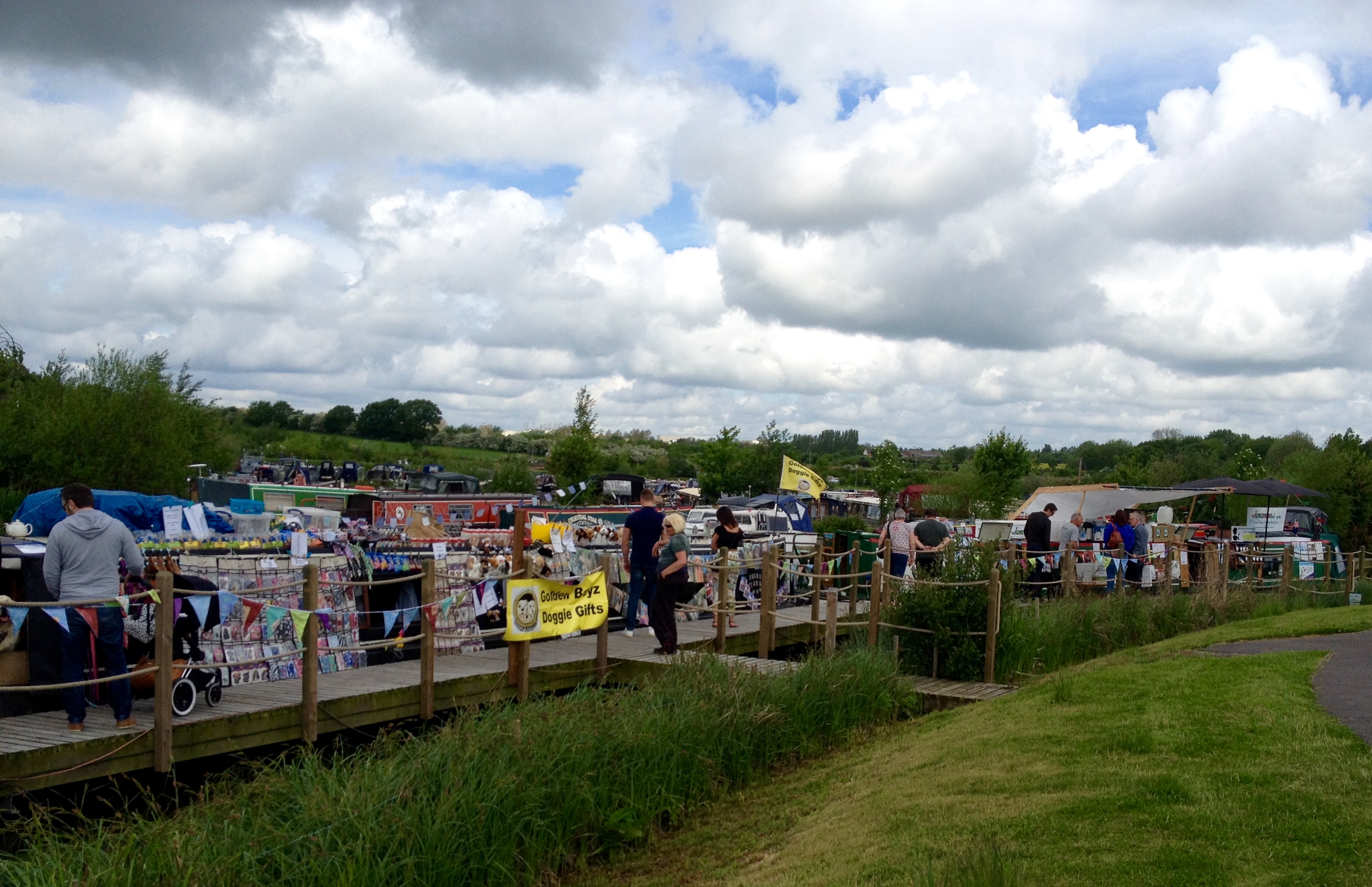 The Doggie Boat and The Home Brew Boat

The Boardwalk berths proved quite a challenge to the other traders.

They’d been informed in good faith, the pontoons were 50 feet long. However, in actuality they were only 40 foot.

If your boat’s 60 foot long, and you’re used to trading from the side hatch, this surprise needed quite a lot of thinking outside the box to overcome. Additionally they’re unusually narrow pontoons for trading, and everyone’s acutely aware of Health and Safety issues.

The eclectic mix of colourful and ingenious folks made the best use of the places they were given, and seemed to enjoy the atmosphere of the bustling marina over the weekend.

Some visitors chose not to walk down to the narrower pontoons, especially those with pushchairs or wheelchairs, but many did and looked as if they really enjoyed browsing and learning more about the boating businesses. Hopefully many also found something to buy. 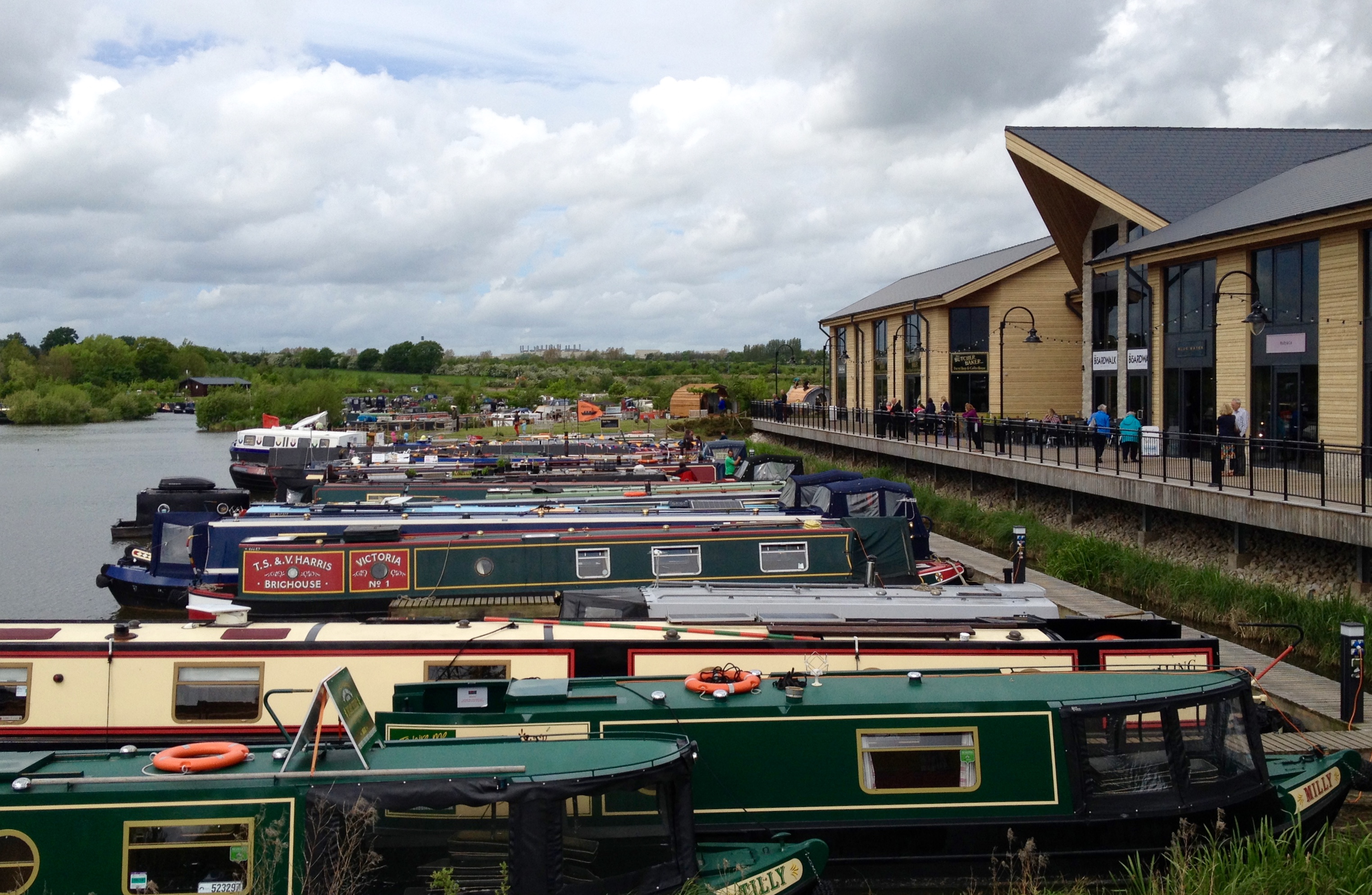 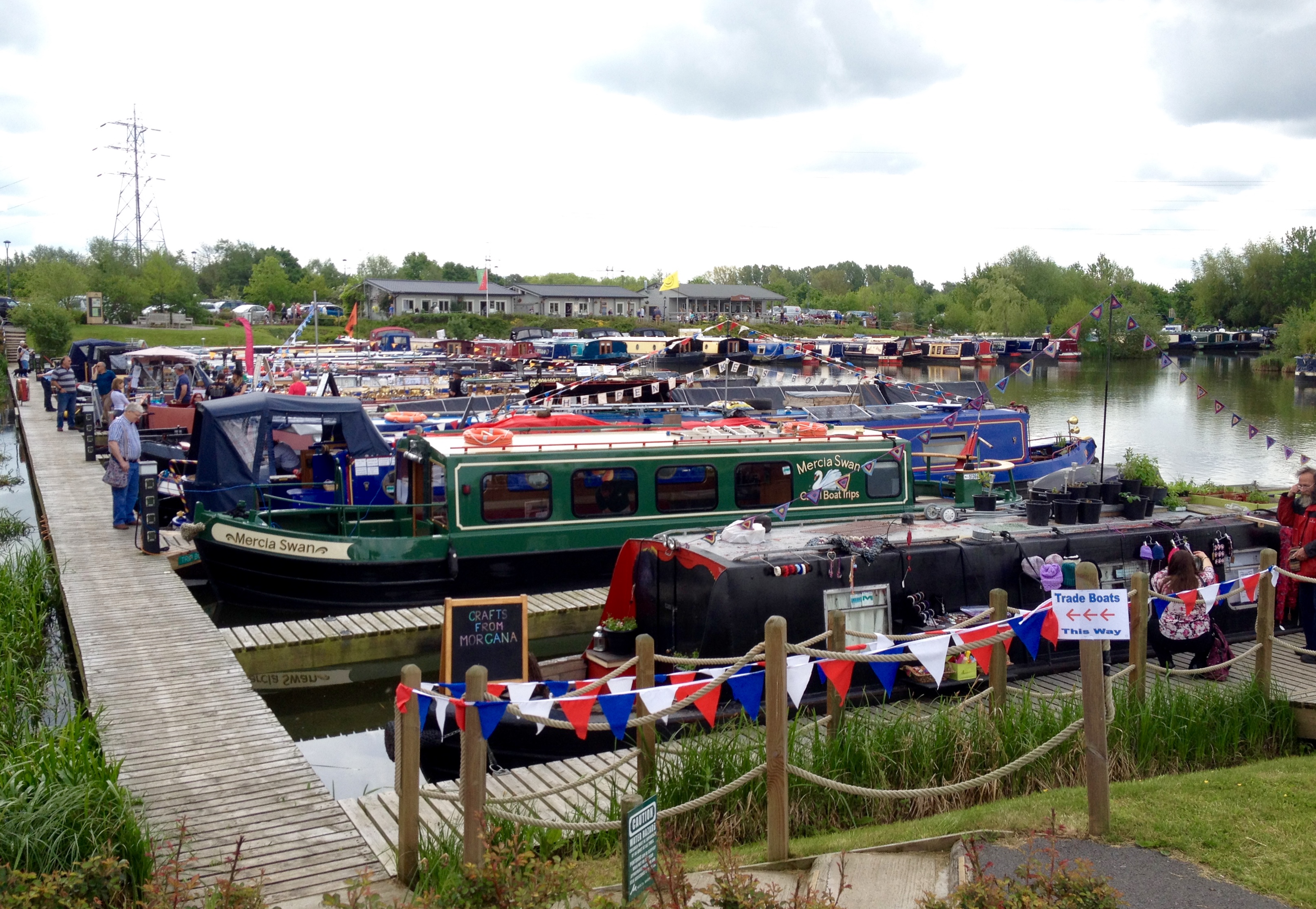 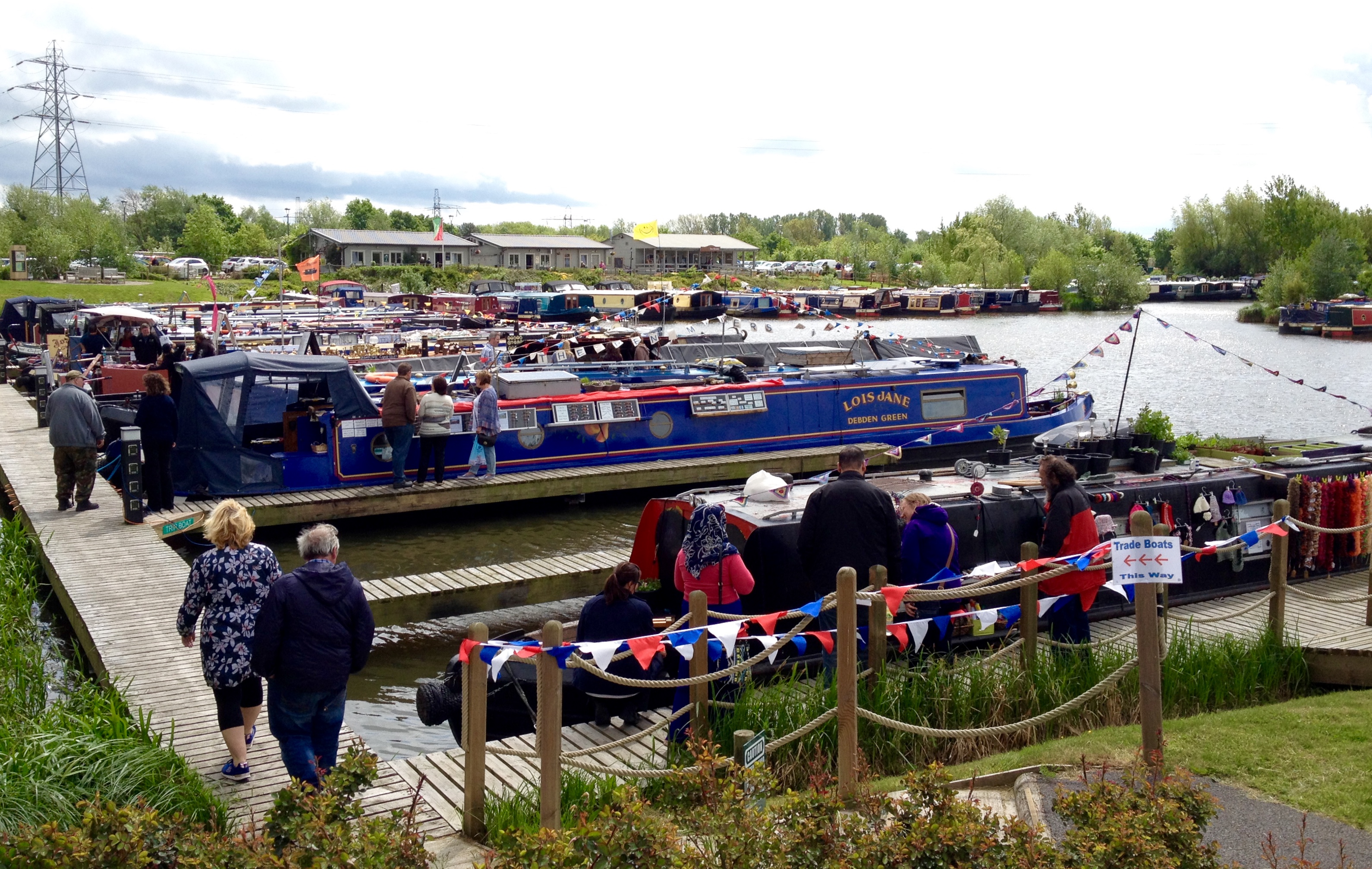 … and with it out of the Marina

The Marina office staff were fantastic as always. They go out of their way to help – and made up the inviting signage to promote the market as well as getting an article in the local newspaper, The Burton Mail.

My particular challenge, that the office staff were powerless to address, and a frequent dilemma, was the strong, blustery winds on Saturday. Barry and I made a futile attempt to erect the Funtastic Facepainting gazebo, abandoning the effort halfway through deciding it wasn’t safe.

I saw the empty Bandstand, strolled to the Marina office and chatted to the lovely Robert who was happy for me to set up there instead. Not being able to control the weather they still helped me find a possibility to trade.

That’s a first, it was quite thrilling! The numerous intermittent gusts soaring through brought me down to earth, frequently having to hold things down to prevent them flying into oblivion! The sudden downpour at 4pm caught us all off guard, and finished the day early. 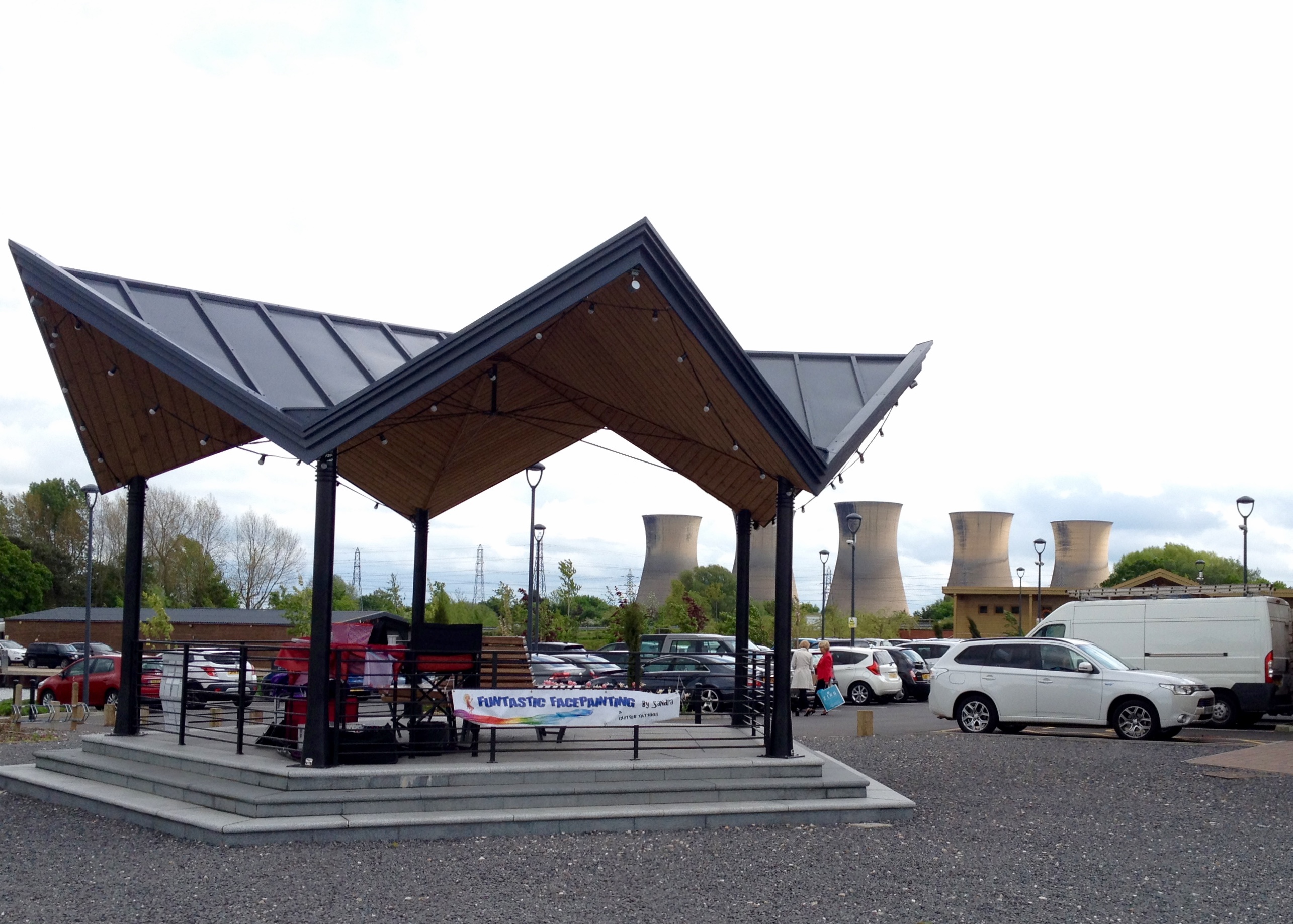 Sunday thankfully brought us an occasional glimpse of sun, mostly mild flutters of breeze, and an absence of rain. Erecting the gazebo gave a great impression from the office end of the Boardwalk, and people emerged from their homes to shop more enthusiastically. 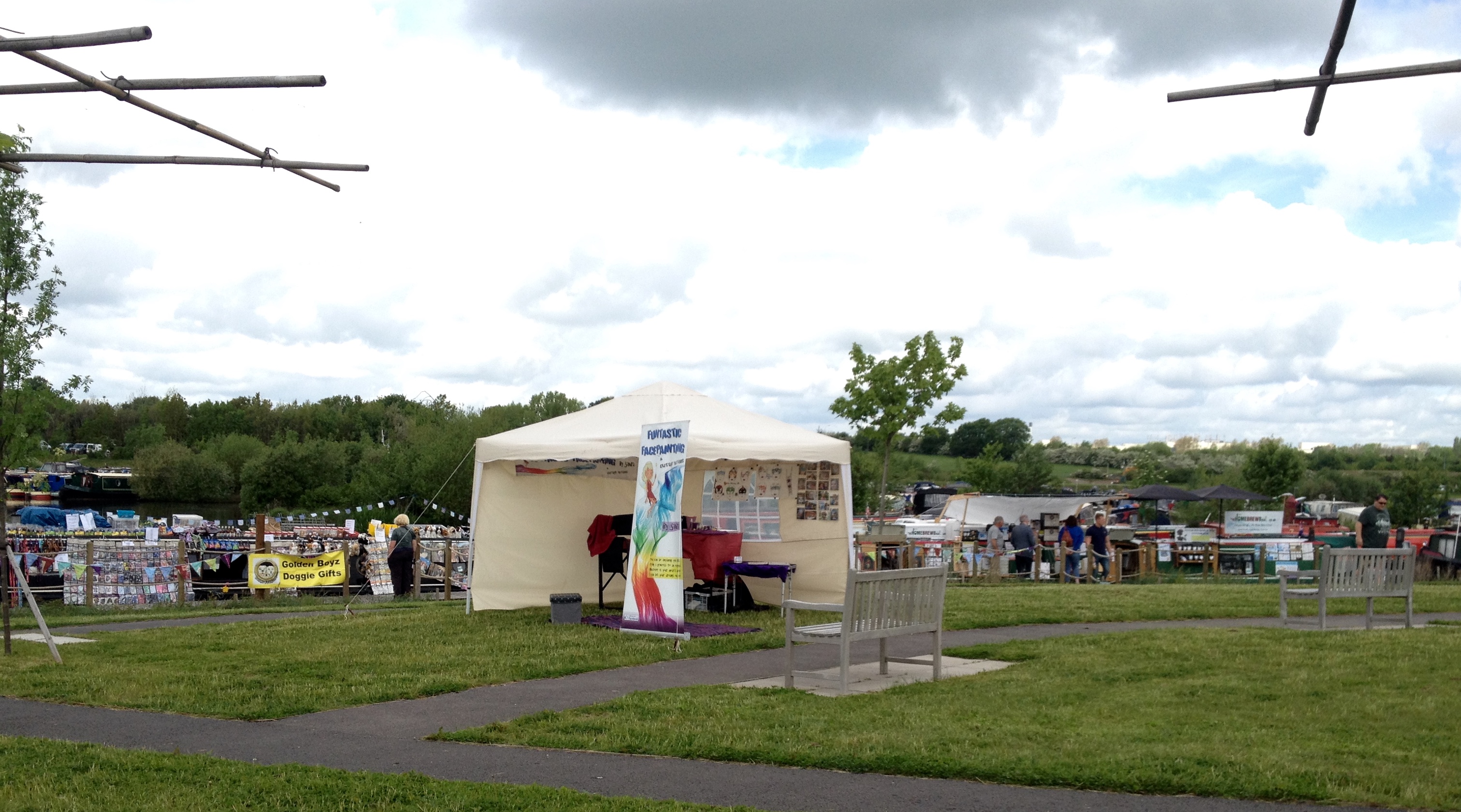 A perfect pitch for Funtastic Facepainting

We’d arranged to meet up with Andrew Denny on Thursday evening, an opportune time as he lives in Willington. For the first time in eons, we indulged ourselves with a meal at The Dragon pub, one of three great establishments in the village. I wanted to reward myself and celebrate a couple of recent accomplishments – completing an online ‘Mindfulness Diploma’; and a ‘Guest Posting Certificate‘ with an extraordinary Blogger called Jon Morrow. You may even be able to see my ‘Graduate’ badge proudly displayed here.

The meal and company were delightful. I know giving myself such a pat on the back will spur me on to complete a few other things I’m working on! 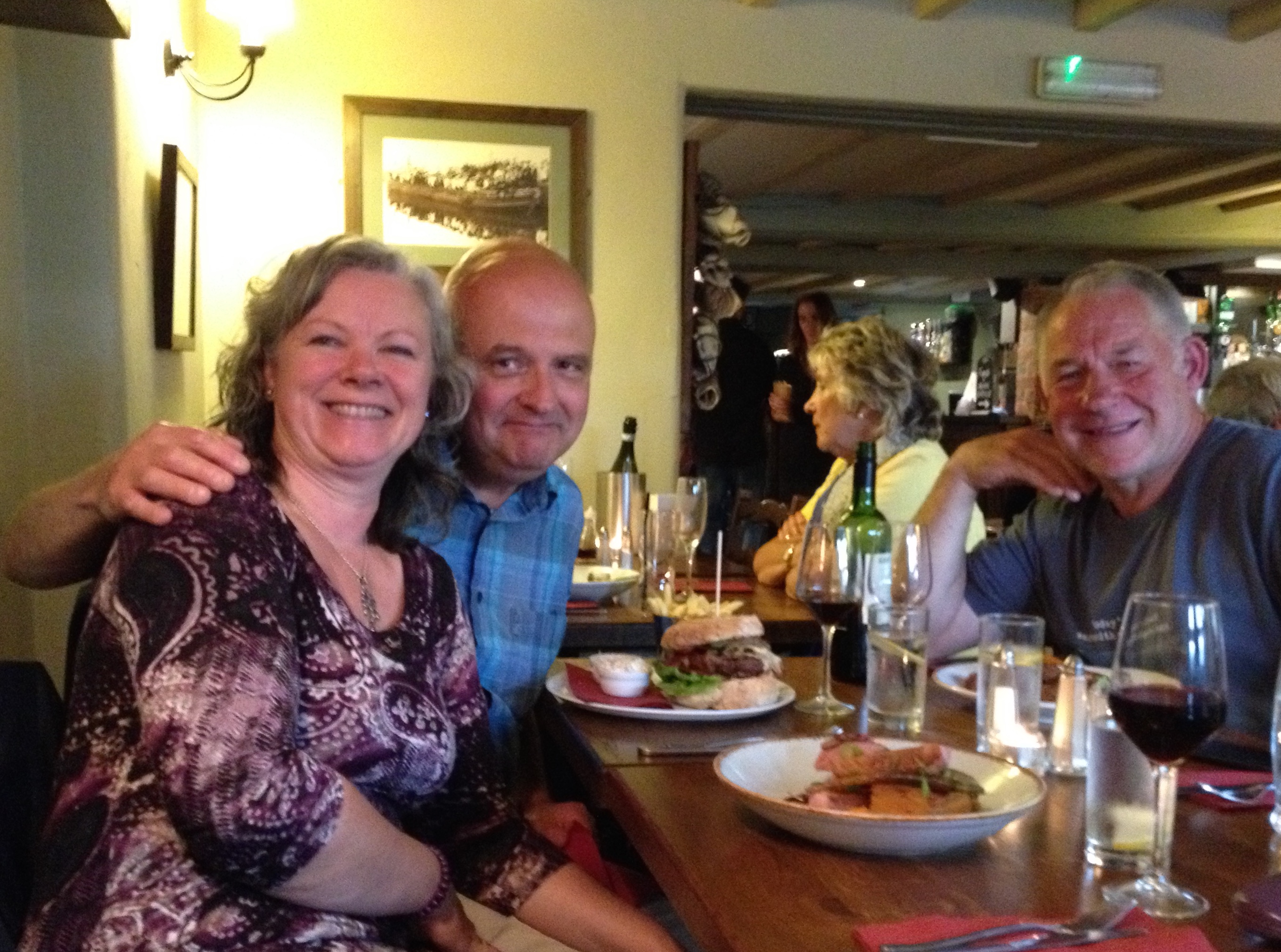 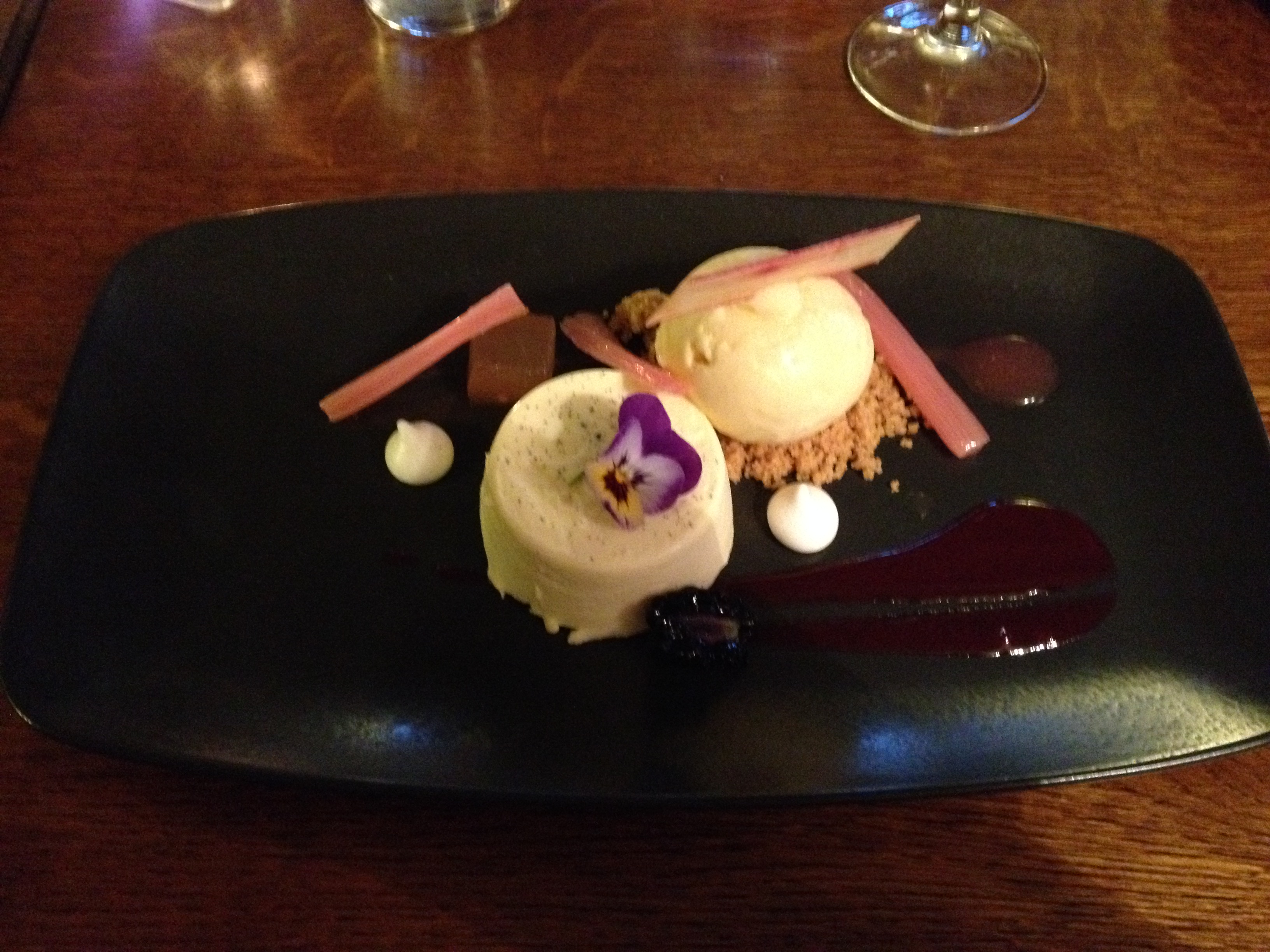 Really pushing the boat out (!) with a desert too – Panna Cotta with ginger ice cream and rhubarb and fig sauce. Divine … And yes, the flower was edible as well

On Saturday evening Jackie on narrowboat ‘Half a Shilling’, had expertly organised a delivery of a Fish and chip supper for traders. Unfortunately, due to the awful weather, we all had to hole up in our own boats to eat rather than having a rare opportunity to socialise. 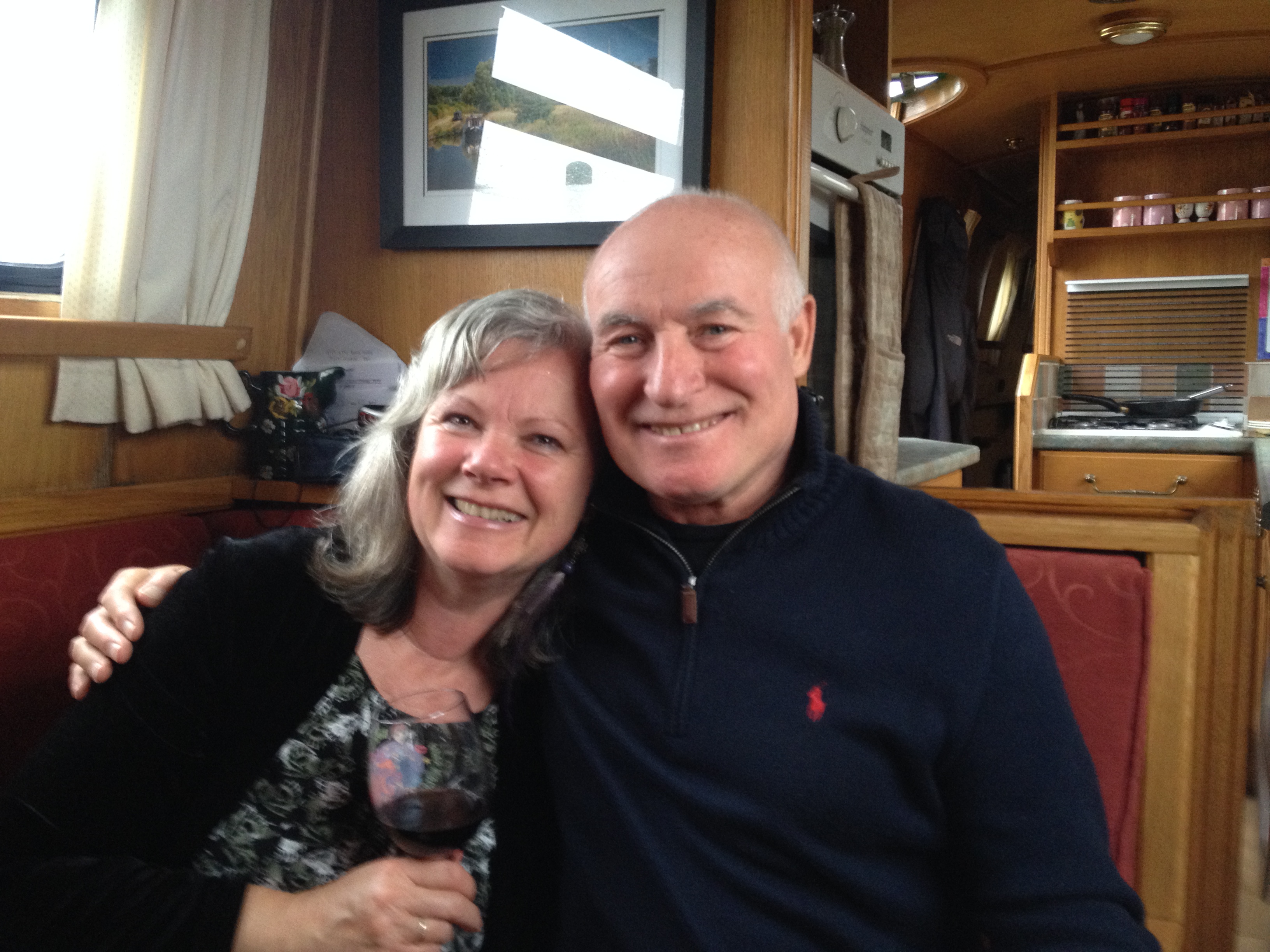 Tony enjoying a cosy evening on board

We also grabbed the chance to catch up with Tony, the father of some friends who live in New Zealand. He’d visited and stayed overnight with Barry when I was in New Zealand in January, and he and Barry had a pleasant evening at The Plume of Feathers, Nigel Morrissey’s pub in Barlaston. I’ve yet to enter the premises – maybe next time we’re passing.

In and out in a flash!

We’d thought we’d have time to spend time with people we met previously at Mercia, but the weekend flew by in a flash and we had to leave as soon as we’d packed up on Sunday evening to get to Burton. We’ve got some humongous travelling days this week, over nine hours a day (extremely weird for us!), and an inordinate number of locks.

My youngest sister Viv, and her husband Ray, are meeting us at Northwich on Friday. So we hope to arrive in time to scoop them up from the station and punctually arrive at The Red Lion, Winsford, on The river Weaver, by 8pm. It’s Viv’s birthday, so we get another meal out to celebrate. Yay!

A busy couple of weeks ahead …

The Home Brew Boat’s next festval is at Eldonian village on 11th and 12th June, part of the 200th anniversary of the Leeds Liverpool Canal. We’ll be trading alongside The Borders Cheese Carrying Company boat, who will feature in Trading Tales on Friday 10th June.

Next Monday I leave Barry to travel solo once again. It’s school holidays for our grandsons, and I’ve got the gift of spending four days with them. On Friday 3rd June, I’ll be hopping on three trains to travel to Droitwich, then borrow mum’s car to drive to Dorset for ‘Colourfest‘. It’s a yoga inspired four-day festival that my youngest daughter Kim will be enjoying, and where I’m volunteering for the weekend. I’ll be part of the support team for four and a half hours on Saturday 4th and Sunday 5th, and in exchange I get a free ticket and a daily meal. Sounds like fun to me!