“Stay in the gazebo or you’ll catch your death!”

Adults often say the most ridiculous things to children without thinking. I couldn’t help but laugh out loud at this startling statement uttered by a parent of children waiting to have their faces painted. Luckily they all saw the funny side too.

I was actually incredulous at how many people continued to visit my often swaying in the wind, rain and hail gazebo over the weekend.

Three consecutive days of fine mornings and totally atrocious (weather-wise) afternoons didn’t put off determined Droitwich residents from supporting their festival. Held annually since 2007, its purpose is to celebrate the life of St Richard, the spa town’s patron saint. Legend proclaims he cleverly enticed the town’s brine wells to flow again in the Middle Ages.

I suspect numbers were down on previous years as it really was persistently poor.

Having a shelter could’ve been my attraction – despite it almost buckling under pressure a few times.

Sadly my banner was beaten on the final afternoon and its metal splint is now precariously bent in half. I suspect even the ingenious kiwi will be hard pressed to mend it – but he’s taken on the challenge valiantly. 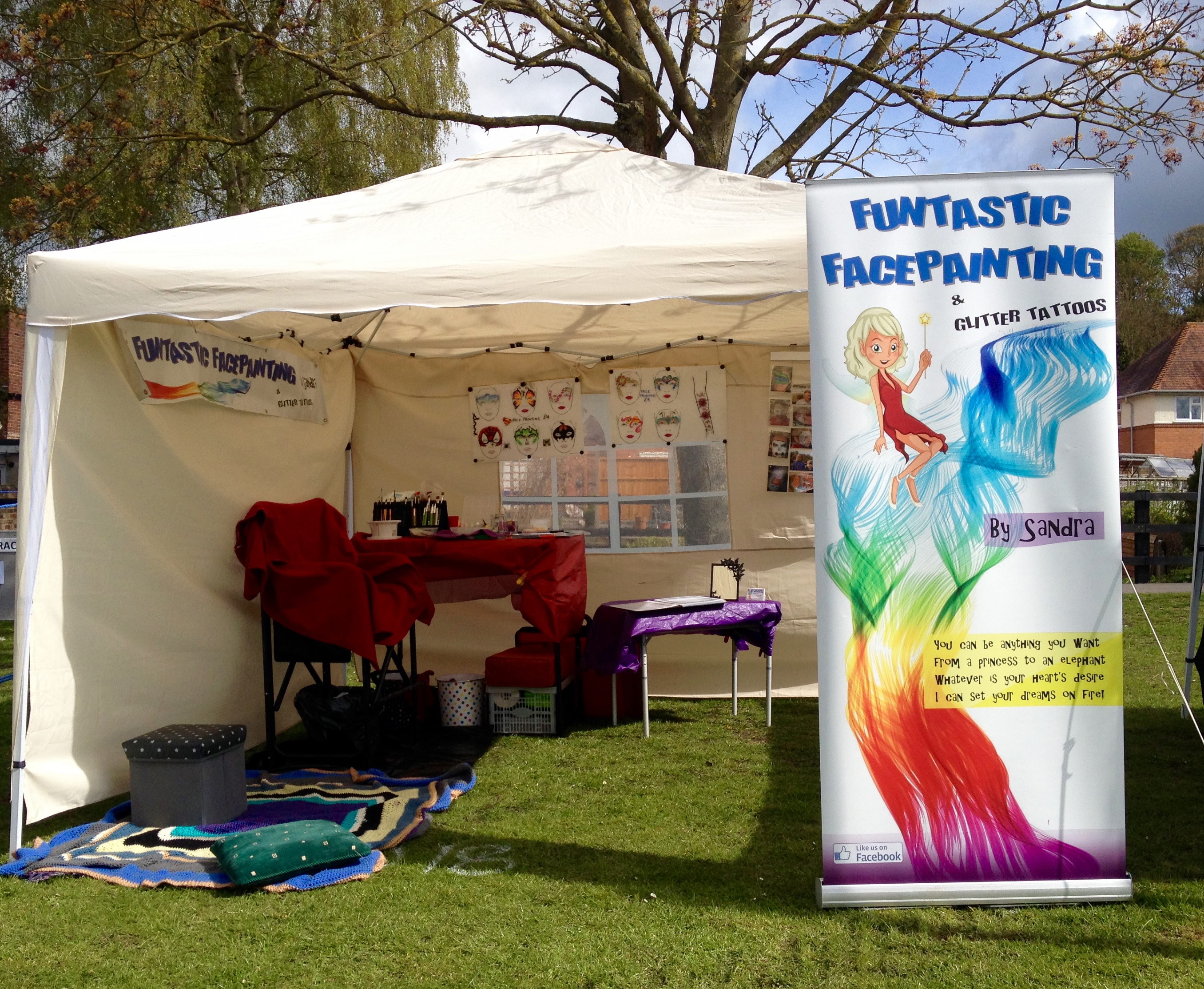 Barry’s canopy fared far better, and remained intact throughout the ups and downs of mother nature. Admittedly he did have to hastily construct some sides to prevent the unremitting elements from damaging his stock.

Otherwise he was pretty proud of his construction, and rightly so. 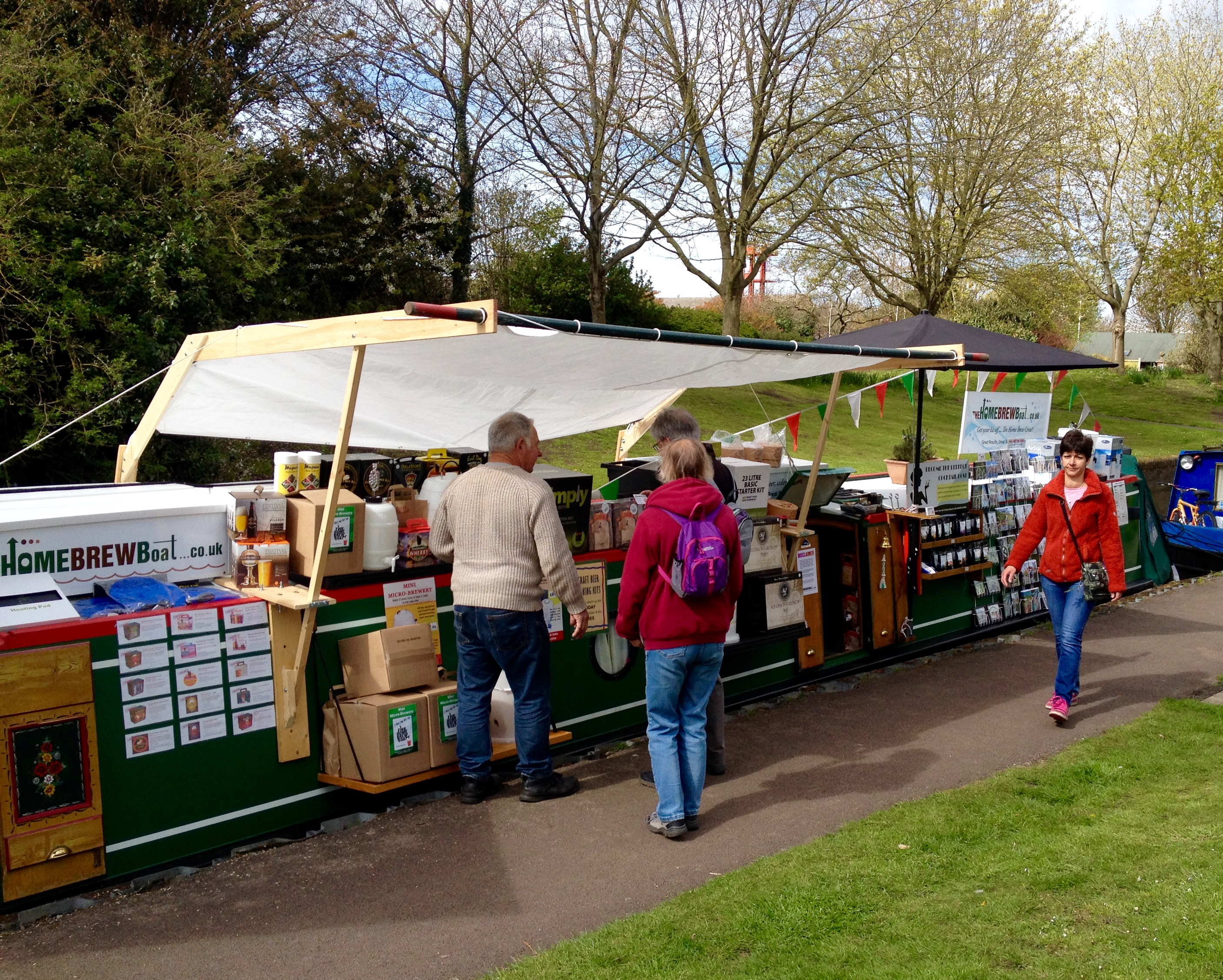 A sunny Saturday morning – no need for sides – yet! 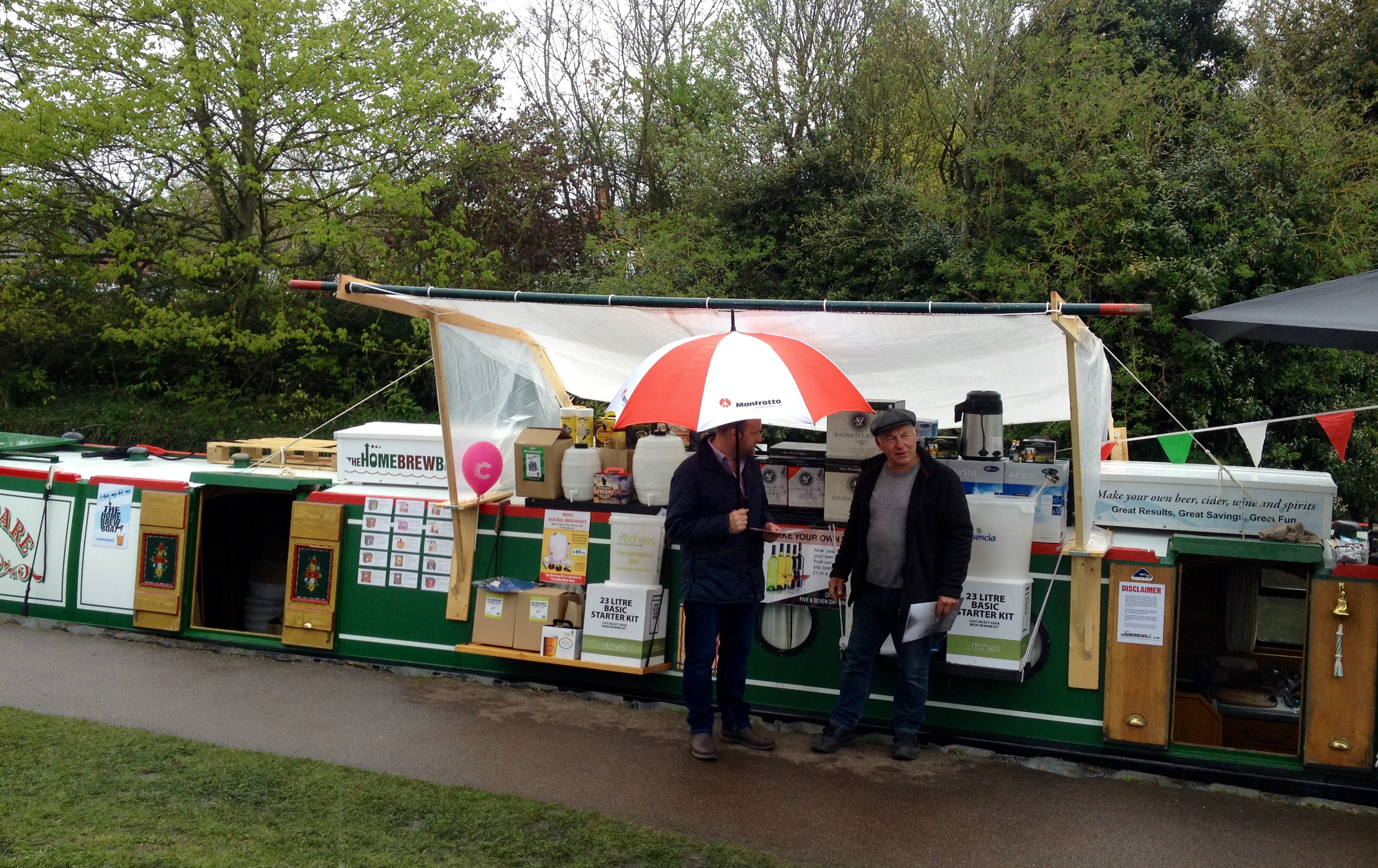 Sheltering from the rain with sides in place on Sunday afternoon

As is the way at festivals when we’re trading, we rarely get an opportunity to see much more than the 20 yards around our pitch/mooring.

I did however make time to snap a few shots of two new trading boats nearby – Ian was selling candle powered boats (fascinating to learn how to do this), and Ziggy and his business partner Deborah, sell an array of copper and brass ware. 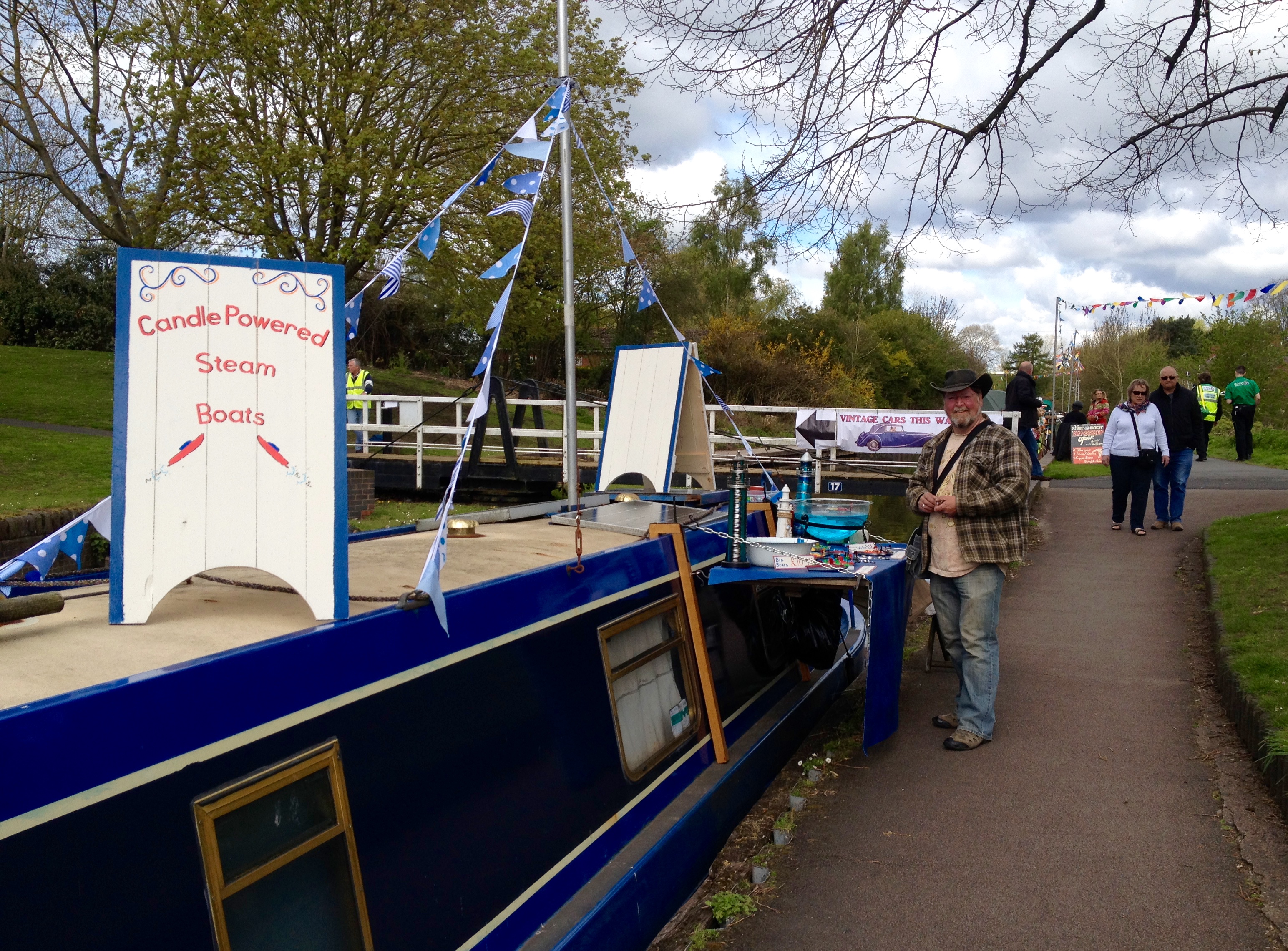 Ian and his candle-powered steam boats 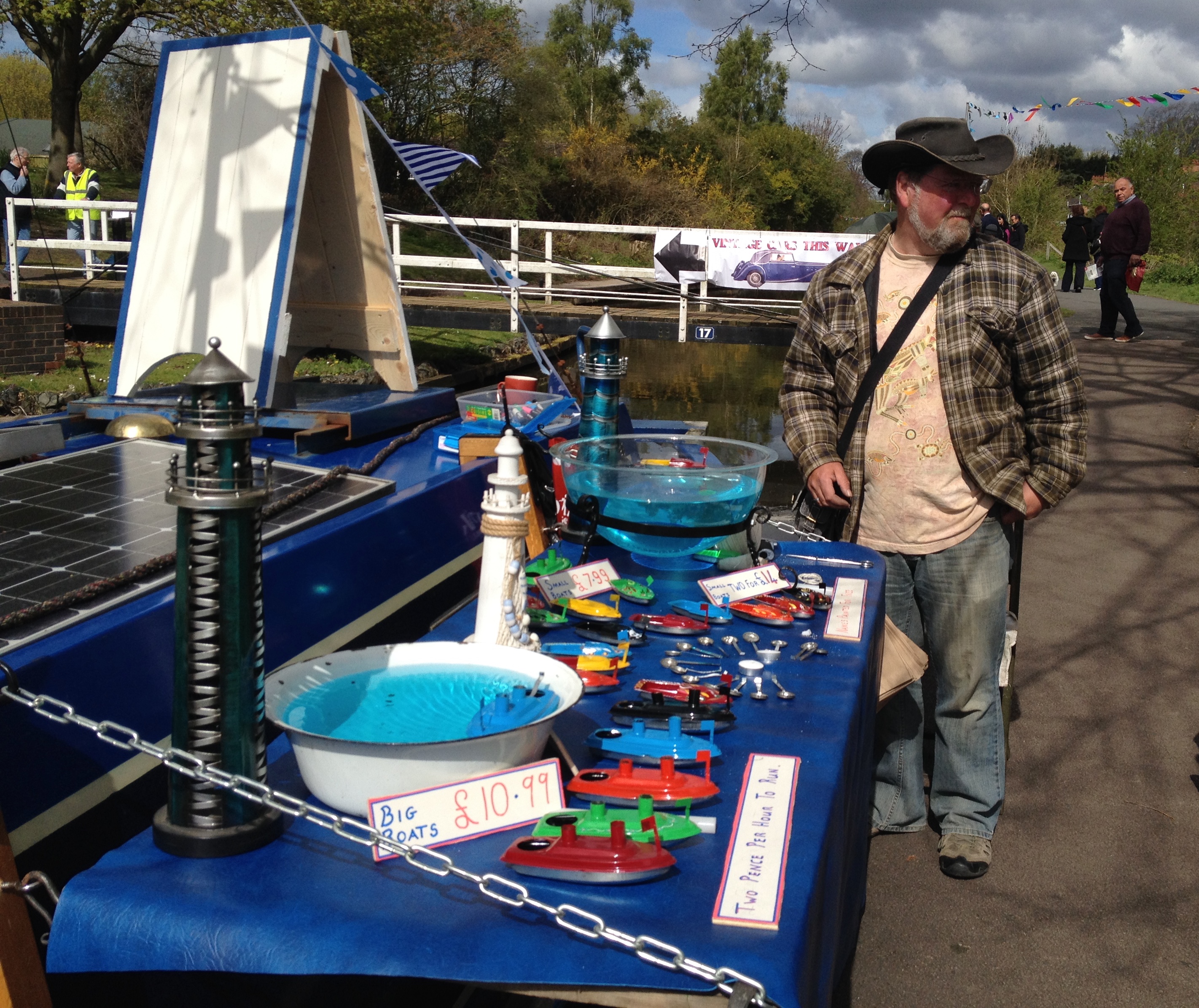 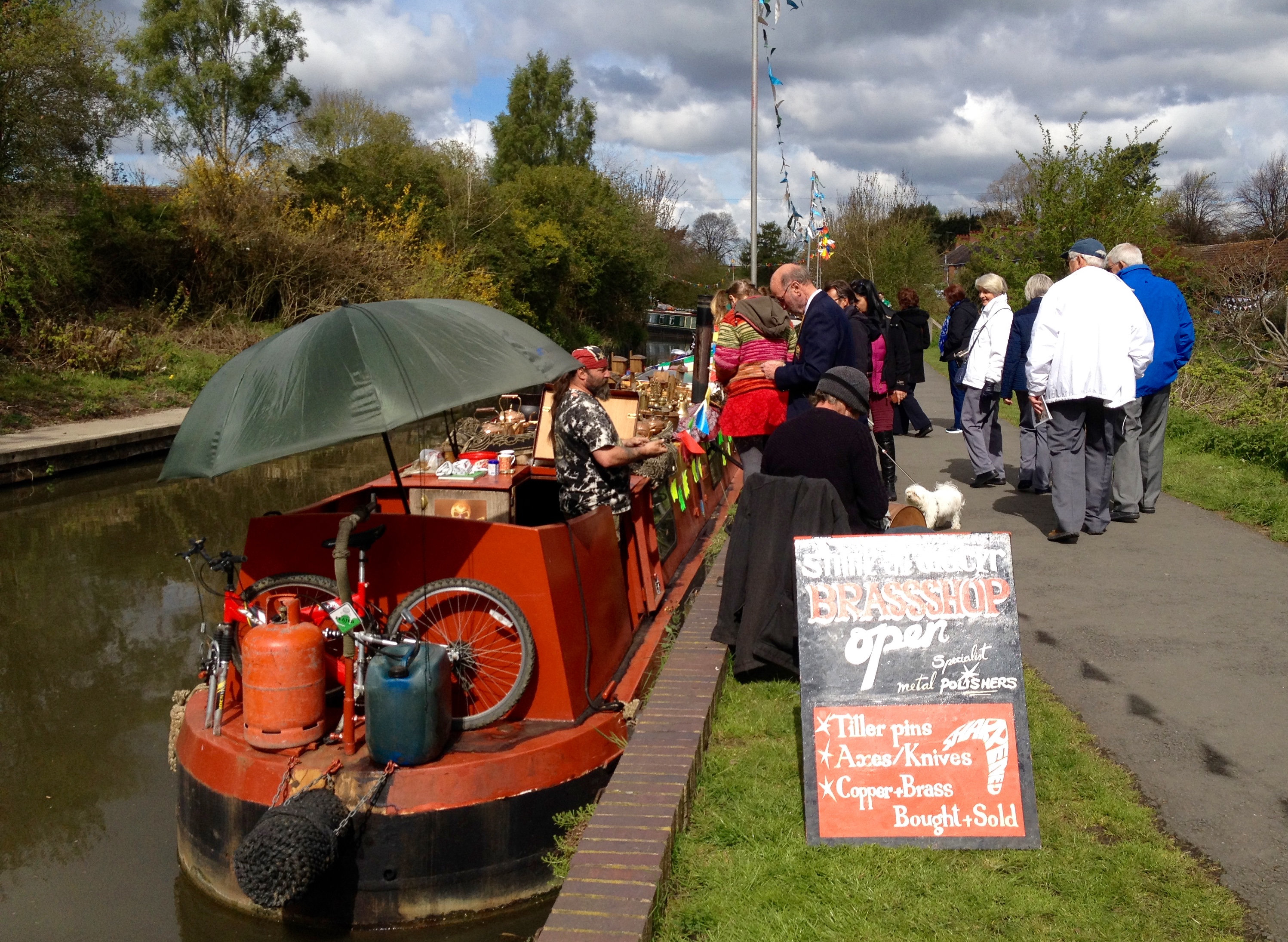 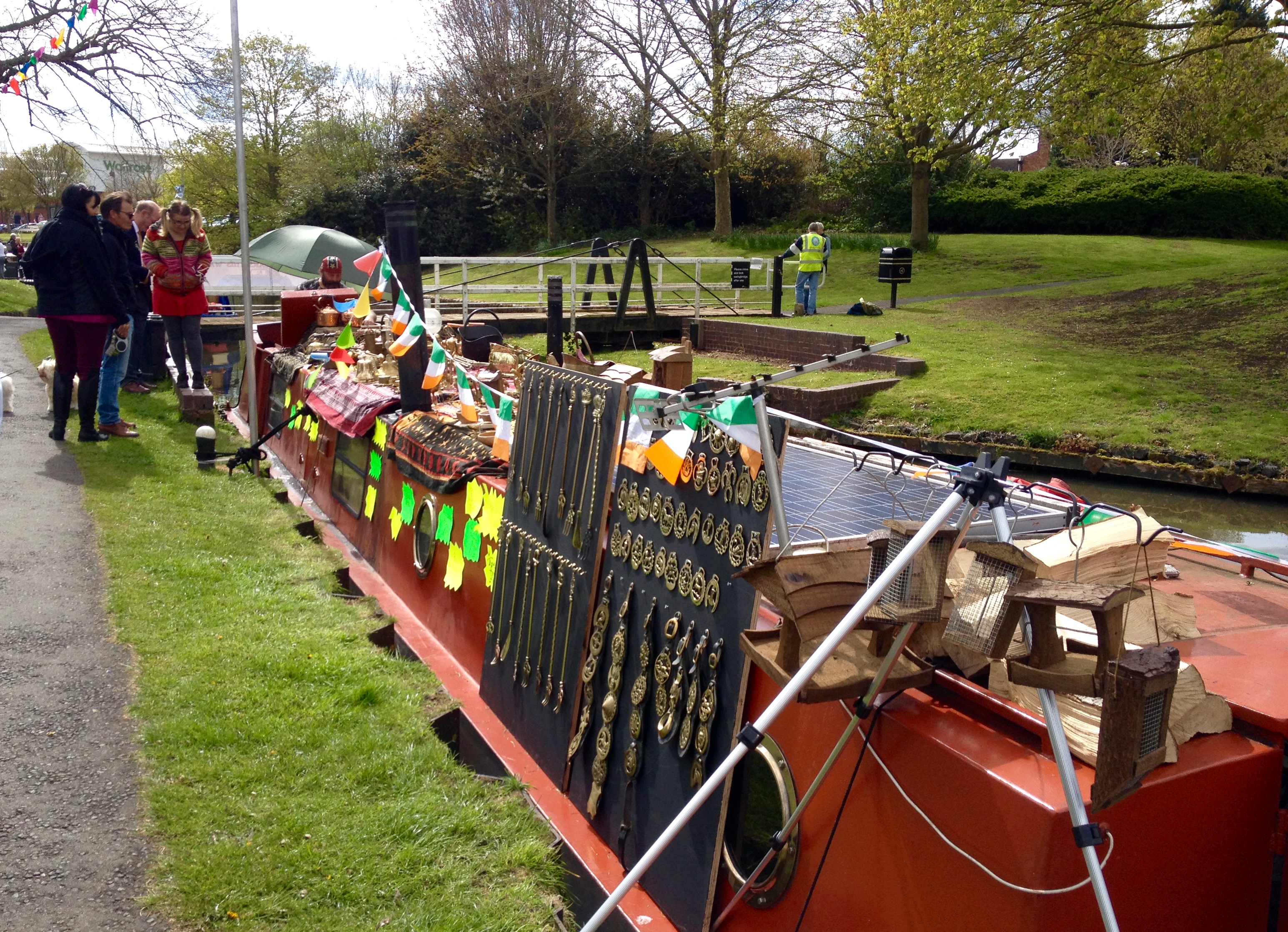 Deborah persuading passers by of the merits of their wares

Three days of standing whilst bending ever so slightly as I transform little faces (and some big ones too!), for hours on end, in the chilly Bank Holiday weather, eventually took its toll on my mature body.

Not only that, we ‘pushed the boat out’ and socialised each evening too!

Friday night in the beer tent was pretty tame; a couple of pints for Barry and half a raspberry cider for me.

By Saturday evening it became more raucous, and involved moving and a-grooving to a brilliant band called ‘The Reflections’. At one stage the dummer’s teenage son played a spine tingling saxophonist solo to a couple of ‘Madness’ covers which had the crowd (and us) in raptures. 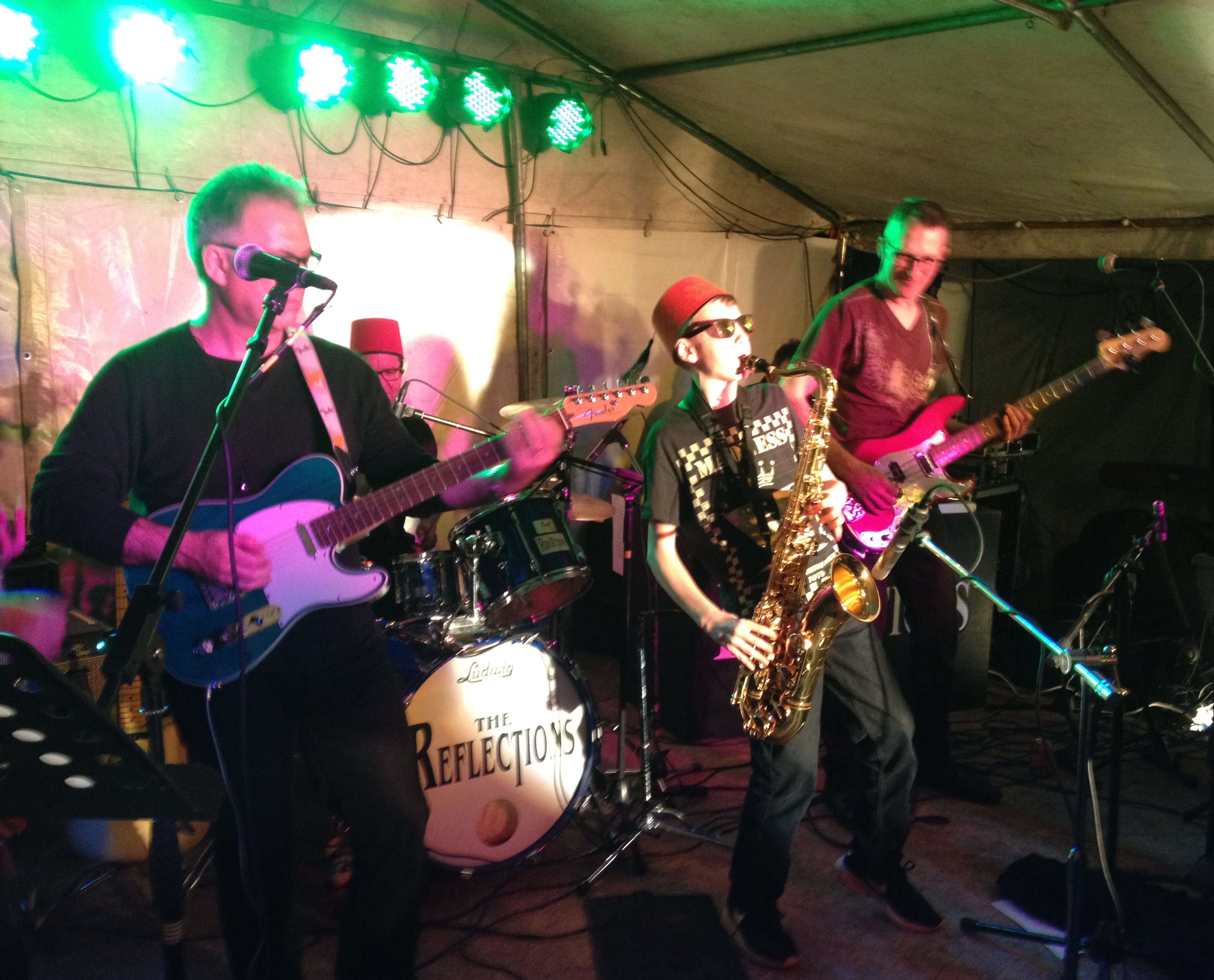 We crawled into bed around 1am on Sunday morning.

On Sunday evening, after a second fairly busy day, we drove 45 minutes away to Walmley (my mum had gone to Southampton for the weekend so I had the use of her car), the small town I grew up in from the age of 5 to 14. 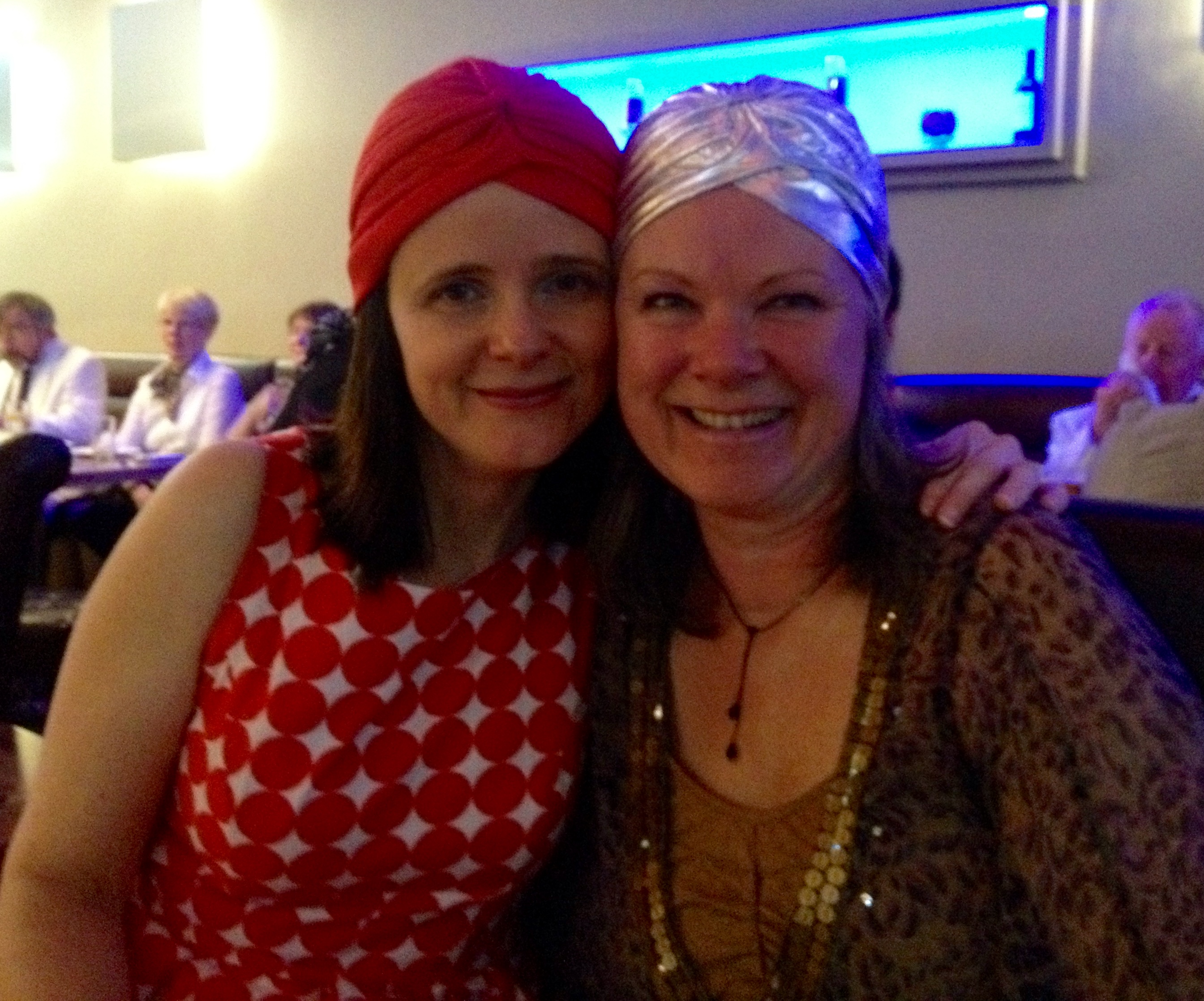 It was my eldest daughter Lisa’s friend’s 40th birthday. The party came with a Casablanca theme – a company called snake-eyes turned the Clubhouse into a movie scene. We hopelessly hadn’t managed to get our act into gear enough to get costumes – which fortunately (?) didn’t matter, as we were presented with headgear on arrival and looked rather fetching I think!

The evening involved even more dancing, and a spot of roulette which was fun.

We stumbled into bed on Monday morning after 2am. 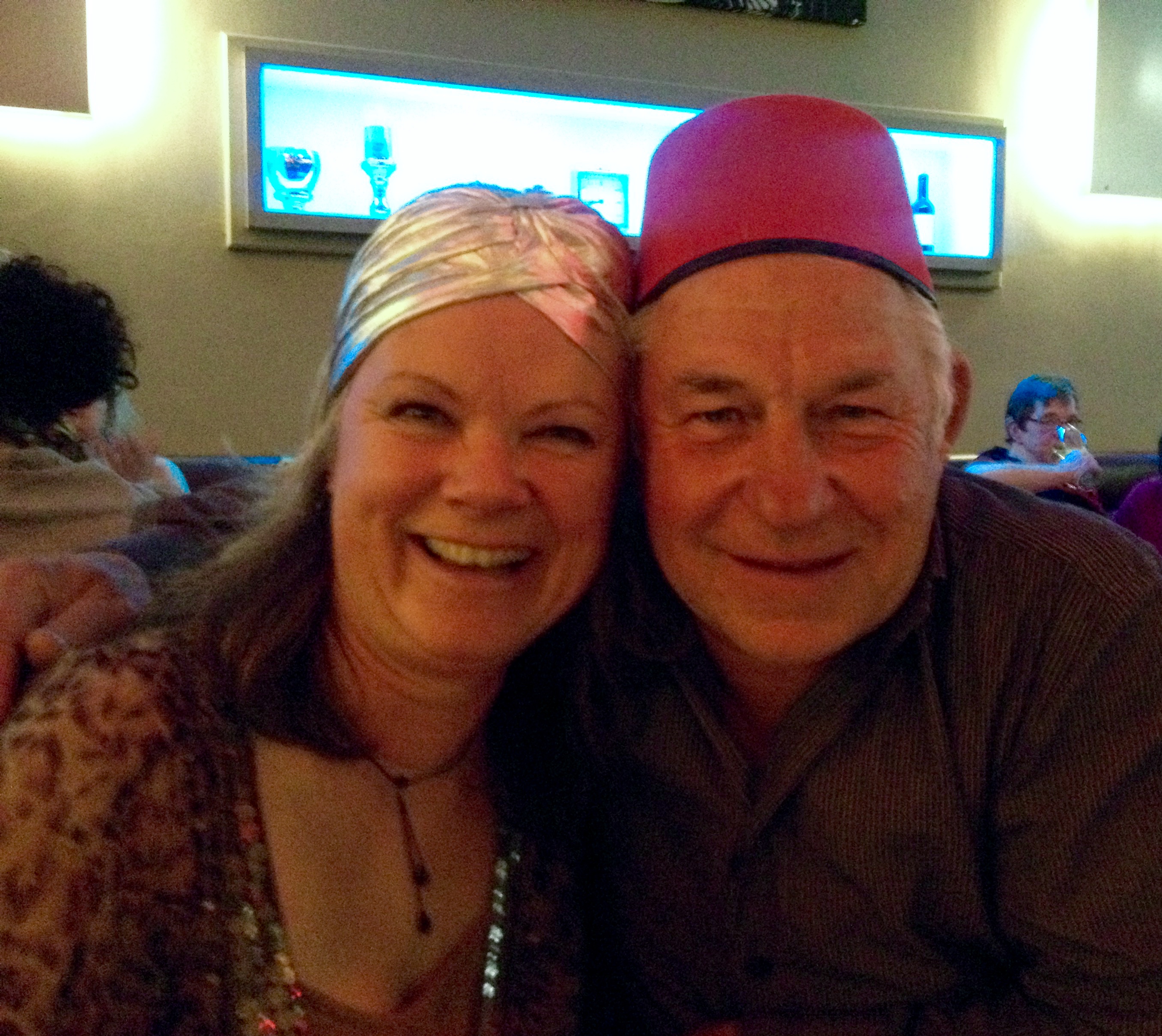 Unsurprisingly, by Monday evening my legs felt as though they’d literally turned to jelly. It was a struggle to stand, let alone support my ageing frame sufficiently to walk anywhere. I dreamed of a soothingly hot bath to soak and restore my aching muscles. Being only 20 minutes from mum’s house and having the car was a perfect opportunity – but I seriously didn’t feel physically able to walk the short distance to where the car was parked.

I collected her from New Street Station on Tuesday, stayed with her overnight – and finally got my revitalising soak!

Heading back to Birmingham

Of course the weather’s now predicted to be warmer than the Mediterranean this weekend.  Wouldn’t it be amazing to live somewhere you knew every day the temperature was going to be? Or maybe it would be boring – it certainly gives us all something to talk about and was the main topic of conversation all weekend!

We’re now heading to Birmingham to do some towpath trading Saturday and Sunday, en route to Fazeley for the Roving Canal Traders Floating Market on 14th and 15th May. It’s uphill all the way unfortunately, so our  bodies are getting an abundance of workouts at the moment.

A distance that would take about an hour in the car, will take us around 16 hours in the boat … 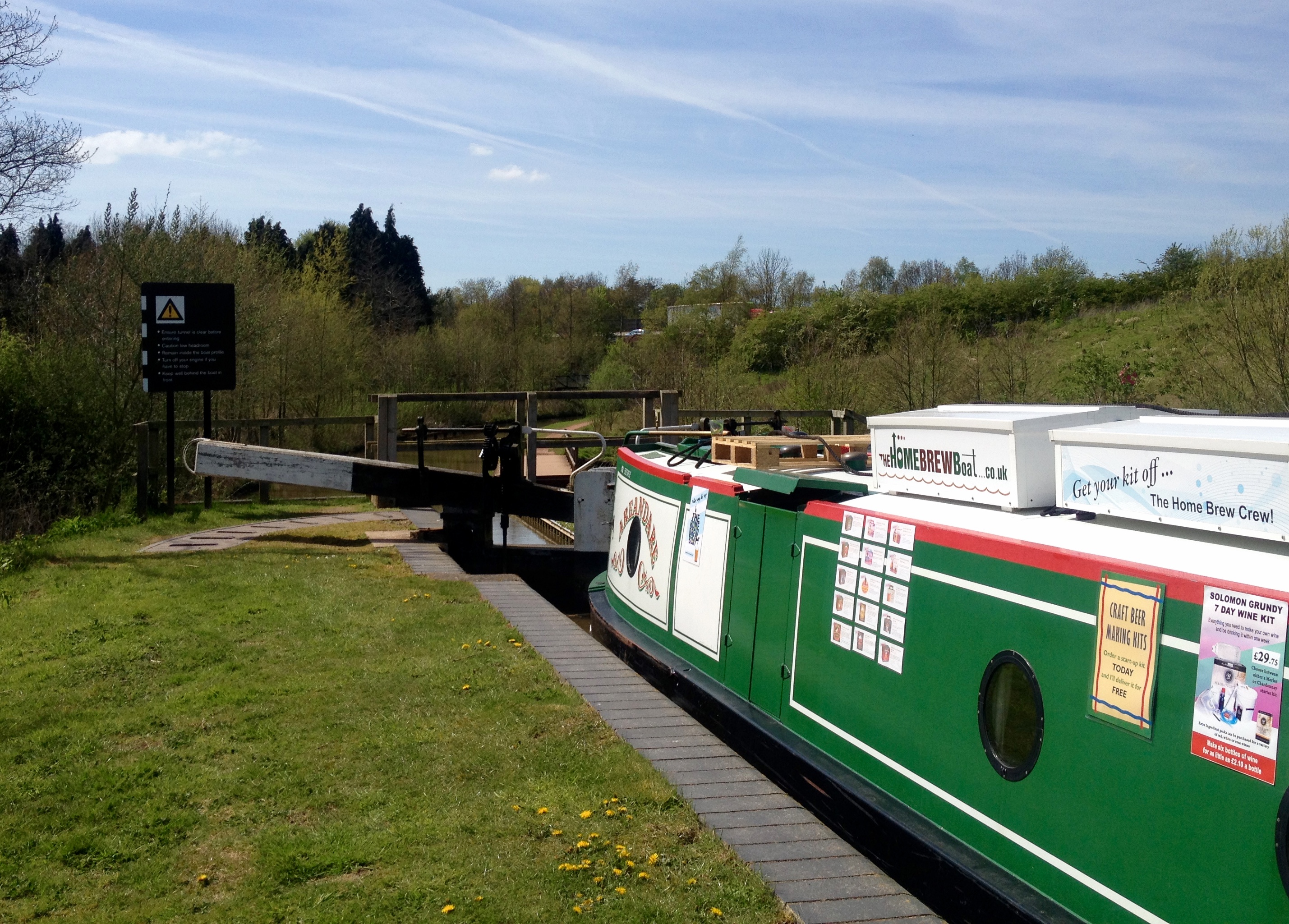 Droitwich Canal, Areandare in the lock following the tunnel under the M5 motorway (you can see a glimpse of cars and lorries speeding along in the distance) – we sneaked under with ¼ inch to spare above the top boxes – after filling the water tanks

We’re not living like this to be in the fast lane, we far prefer to savour the many magical moments along the way.