Whether you love, despise, or feel indifferent about it, the Internet has become one of the most astounding methods of networking and communication ever invented.

That’s my humble opinion anyway – though I suspect I’m becoming a bit of a technology nerd (no need to rush to prepare your comment/debate below on that statement …).

Being entrepreneurs (I love finally being able to call myself that!), or the even more intrepid  ‘solopreneurs’, entails embracing the best online marketing opportunities available. Especially the no-cost variety!

Barry’s a wizard at WordPress for his website www.thehomebrewboat.co.uk (I do love alliterations).

He mostly tolerates responding to emails as he knows it’s essential to his business. Ask him to do anything on Facebook though, and I see him visibly shuddering as if I’ve asked him to have a cup of tea rather than a home brewed beer in the evening.

Oh! And this blog of course, which ties them all together magically.

It thrills me when my time tapping on the Mac keyboard brings us opportunities to share our daring adventures aboard Areandare; our quest to live outside the normal ‘rat race’; and the challenges of negotiating with the intrepid and intentionally (we feel) elusive Immigration Department so my husband can be ‘allowed’ to remain living with me ‘indefinitely’ in the UK.

We frequently get off the cuff the reactions like “... how come everyone else and their auntie can come in easily …?” It is what it is. The whole process becomes even more challenging living and ‘working’ the way we do, but we’re getting there (at least we’re fairly confident we’ll successfully negotiate Round Two of three in July this year).

The past few weeks have highlighted a few wins from my well-spent social media time, so I thought I’d share them with you – it may inspire you to expose yourselves a bit more too!

A few weeks ago I received an email from the ‘Boats and Outboards‘ website, asking if we’d like to contribute a post to a blog for ‘Top Boating Blogs’. I’m not certain why we were ‘chosen’ to be honest, a faux pas on my part …

Anyway, I was away with my sisters and mum at the time, and the turnaround was tight. But I don’t like to turn such an marvellous marketing opportunity down. Fortunately I’d taken my laptop along with me – so I woke up early one morning, when they were all still silently sleeping, and wrote about our blogging in response to the questions they sent.

It turned into a rather splendid post (check it out here – ‘Life on a Narrowboat‘), showcasing 16 narrow boating Bloggers (as of today, they’ve added a few since I last looked so may be more when you do!) – and we were childishly excited to be sent our first ‘award’ badge. Posting it on the blog sidebar was akin to proudly sewing your first Brownie ‘Cookery Skills’ or suchlike award onto your uniform. A sense of achievement for the commitment of seven years honing your blog publishing skills.

I’m never quite sure about Tweeting – consequently mine’s a bit sporadic.

However I’m starting to feel more of an affinity to it lately, frequently surprised at what a difference a few words in a ‘mini-blog-post’ can make.

After our prestigious (it doesn’t take much to make me feel important lol!) shiny blog badge, I tweeted a link about it, and a short while later received one of those ‘No Caller ID’ phone calls. I’m usually reluctant to respond as they’re generally from someone talking about my ‘…recent automobile accident ...’, which not owning a car always amuses me; or a PPI seller. I took a chance on this one, and it turned out to be a  journalist from ‘Woman and Home‘ magazine. She was looking for a woman living on a narrowboat.

After a ten-minute intensive interview, she said she’d pitch the story to her editor and get back to me by the end of the week. I did a bit of digging into her Twitter-feed (sounds painful!) and discovered they were looking for someone who had sold their house to live on a narrowboat because it’s cheaper.

Having not heard from her again, I  can only assume the responses I gave her didn’t match their criteria! One of which was a ‘woman in her thirties’ I think – I’m a way off that now … Ah well, my ego was momentarily stroked imagining my photo-shoot (that would’ve been the next stage). Though I did  have a brief flash of terror imagining I’d have to shed out for an appropriate new outfit and hair cut – so realistically they’ve saved me a fortune.

On a brighter note, I sent a Tweet on Friday to let fellow Twitters (!) know we’d be in Penkridge over the weekend. I got an amusing reply:

“@nbareandare Fantastic we are going through Penkridge tomorrow will check you out! Look out for Wah Wah Chugg @ChicoChugg Big Woofs.”

Serendipitous happenings often occur in my life – and this was one of them. That morning I’d been reading an article in ‘Canal Boating Times‘ about Chico the Jack Russell. So luckily I had an inkling about who @ChicoChugg was – otherwise I may’ve have thought the auto-correct on their phone had altered the actual message. 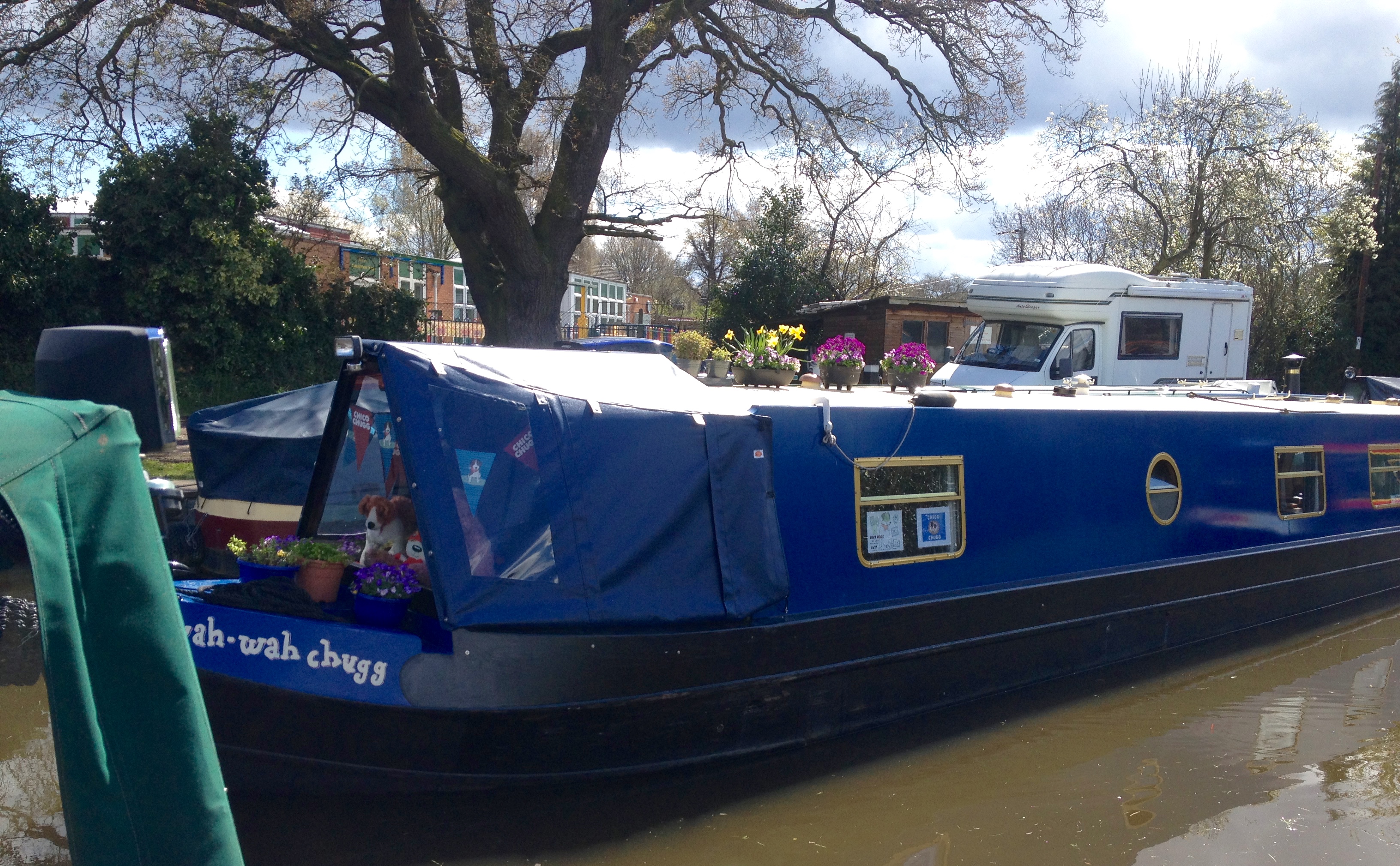 Sure enough, early on Sunday afternoon, along came a boat called ‘Wah Wah Chugg’ with Chico and his master walking along the towpath.

Janet, the Tweeter, is a retired primary school deputy head. Several years ago she gave up her job, sold her house and bought a narrowboat. She now lives aboard with her husband Mike and Chico their Jack Russell, spending her time writing books and creating stories for children’s TV. Follow them on Facebook, or check out Chico’s website. 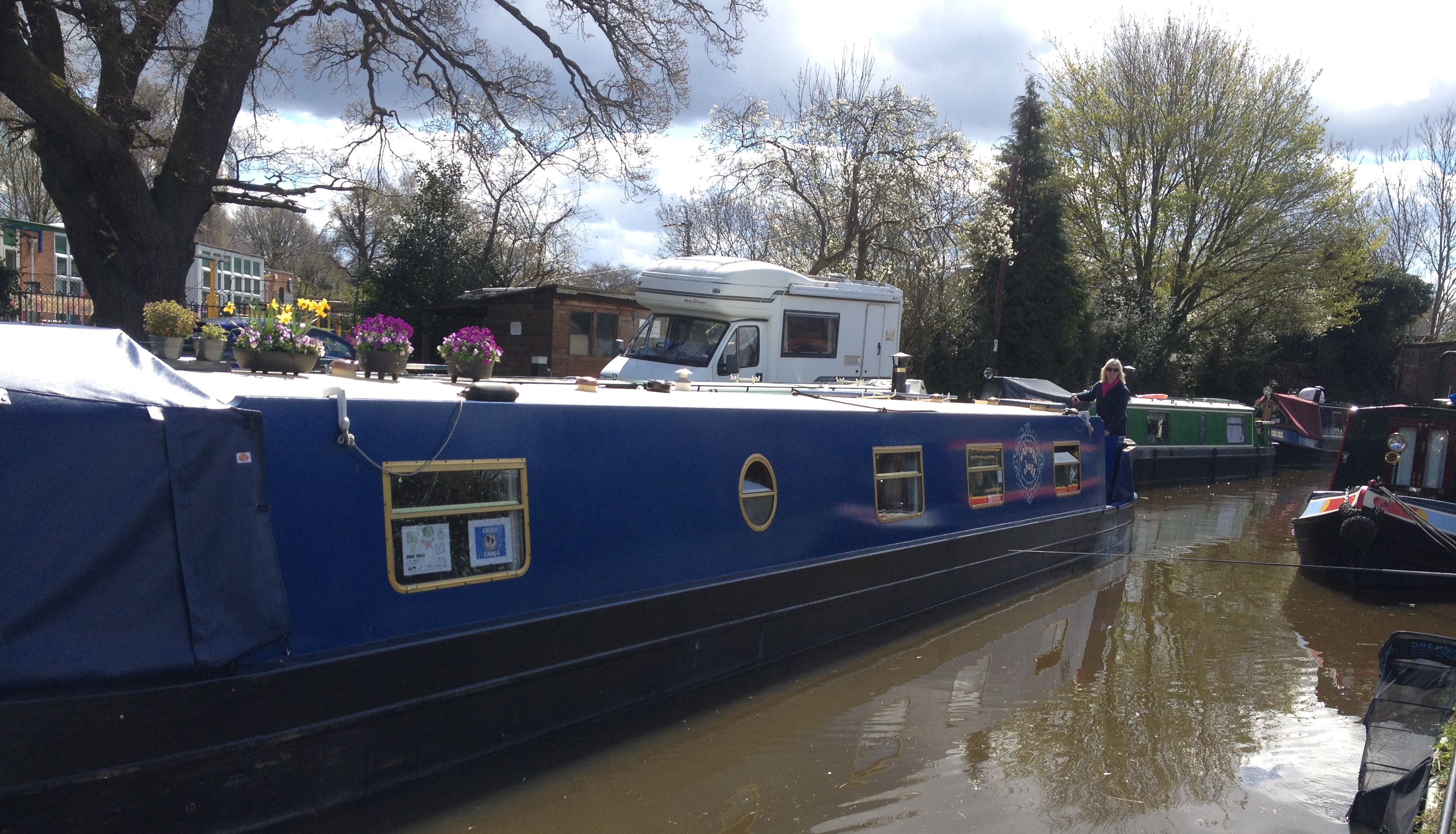 I love meeting new people who are finding inventive ways to forge a sustainable income and live a little differently on ‘the cut’. Janet produced a goodie bag for us with the third book in her series (Chico Chugg and The Visitors), a few badges, erasers and pencils in. I’m halfway through the paperback, which is cleverly written from Chico’s perspective, and aimed at the 7 to 11 year old market.

We got Barry to take a photo of us – sadly  he’s not the best at using my iPhone as a camera, and all five of the shots he took (in bright sunlight so he couldn’t see the screen adequately) had part of his finger over them. Sorry Janet, hopefully you’ve got a better image on your iPad! 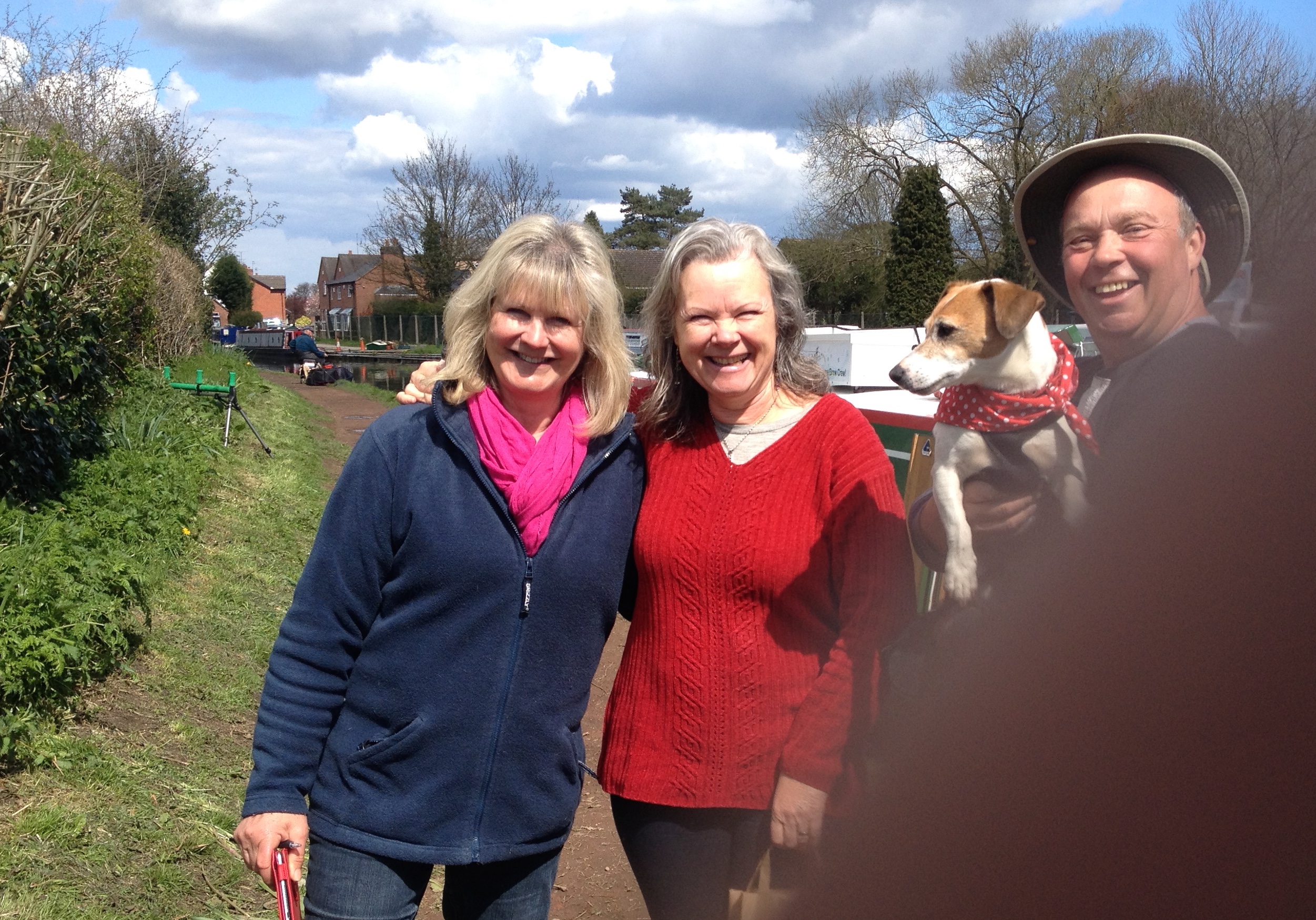 Janet, Sandra, Chico and Mike (and a bit of Barry to boot!)

Another bonus of my location Tweet was a visit from our dear friend Andrew Denny, who we’ve known since Barry idolised him reading his Granny Buttons blog for months before our first trip in 2009. He’s now Deputy Editor of Waterways World. He saw my Tweet and phoned to say he’d been invited to come and see one of the Truman Enterprise Trust‘s narrowboats who happened to be travelling through Penkridge on Saturday. So he came to see us for a cup of tea, killing two birds (pun intended!) with one Tweet!

We’re members of a number of Facebook Floating Trader groups, which expand our network exponentially.

A couple we’ve traded with previously but not had much of a chance to get to know, are James and Debbie, who run The Pen Maker’s Boat. They happened to be moored up in Penkridge for the weekend too, which gave us a fantastic excuse to do so.

Barry felt like he’d met a kindred soul as there was lots of talk about engines and shafts, calorifiers, Inverters and cookers, which was mostly above my head. Debbie on the other hand was amazing at keeping  up with the boys and their toys. I was incredibly impressed with her ‘blue job’ knowledge.

We had a couple of evenings of laughter and sharing experiences, as well as introducing them to the vagaries of our favourite card-game six-handed-rummy. We may’ve partook in a bit of home brew sampling too! All in the name of research of course.

I’m more of a Facebook-er than anything else, and aim to keep The Home Brew Boat FB page up to date with our activities.

After posting that we’d be in Penkridge, Andy and Leslie, two of our lovely customers, commented that they’d be in the area and also came to see us for a cuppa.

I’m frequently intrigued to hear people say they’re not ‘on’ Facebook. They regale me with a long list of reasons for their reluctance, nay complete distrust, of said site. I’m never quite sure what they imagine is going to happen to their self-control should they sign-up and join in the fun. I guess it’s like anything. If you don’t know what you’re doing it can appear frightening.

Admittedly if you veer towards the introvert, the thought of Facebook communication could be intimidating.

It can be a little unnerving at times. Even I have to acknowledge that.

On Sunday evening I was ‘tagged’ in a comment thread from a post of my nephew. A site called ‘Pandacat’, it seems, gives you the opportunity to see a post you’re most likely to write in ten years time! Harry’s said “HELP!! She’s pregnant! What do I do??” They proposed two comments on his imaginary status update – the first one of two was from me saying “Your life isn’t over, a new one is beginning!!!“

Now THAT is spooky I have to admit …

However, the upside that keeps the see-saw balanced towards it being awesome rather than scary is a recent new Facebook-er who I ‘friended’, one of my amazing midwifery mentors from the late 1980s, messaged me yesterday. After a few on-line ‘chats’, I realised we’re actually not far from where she and her husband live. Tonight she’s scooping us up, taking us to their home, and feeding us a take-away curry.

How can anyone be frightened of such exposure?

It really can open up a whole new world that couldn’t have been imagined even ten years ago. I’m all for embracing it and watching it advance in wonderment.

2 thoughts on “Exposing ourselves online and meeting people in Penkridge”