Continuing with my normal pattern of around 40% of the time off the boat and 60% on, I returned last Thursday from a jaunt around the country connecting with friends and family.

Firstly I spent 24 hours with my eldest daughter and grandsons, as we’d moored overnight at Grindley Brook, a ten minute drive from her house. How marvellous to be so nearby, albeit briefly.

On the Saturday I jumped on the train from Whitchurch to Crewe, then Birmingham New Street, then Wylde Green, where a friend met me and we enjoyed a fun evening in a very old haunt in Sutton Coldfield – The Duke Inn. I run a Facebook group for people who work, or have worked, at the Maternity Unit at Good Hope Hospital and we had a wonderful get-together with around 35 people, some I hadn’t seen for over a decade.

On the Sunday 6th March, Mother’s Day, I did more train travelling (I should get shares!) to Euston, Victoria, then Hove to stay with my younger daughter for a few days. For Mother’s Day and of course International Women’s Day on the Tuesday, a local theatre group performed ‘The Vagina Monologues‘ at The Dome Studio Theatre – and Dhanya was one of the amazing women in the cast. It’s the third time I’ve seen this particular show and it always moves me to tears to hear stories from women around the world and how they’ve found the courage to speak out. 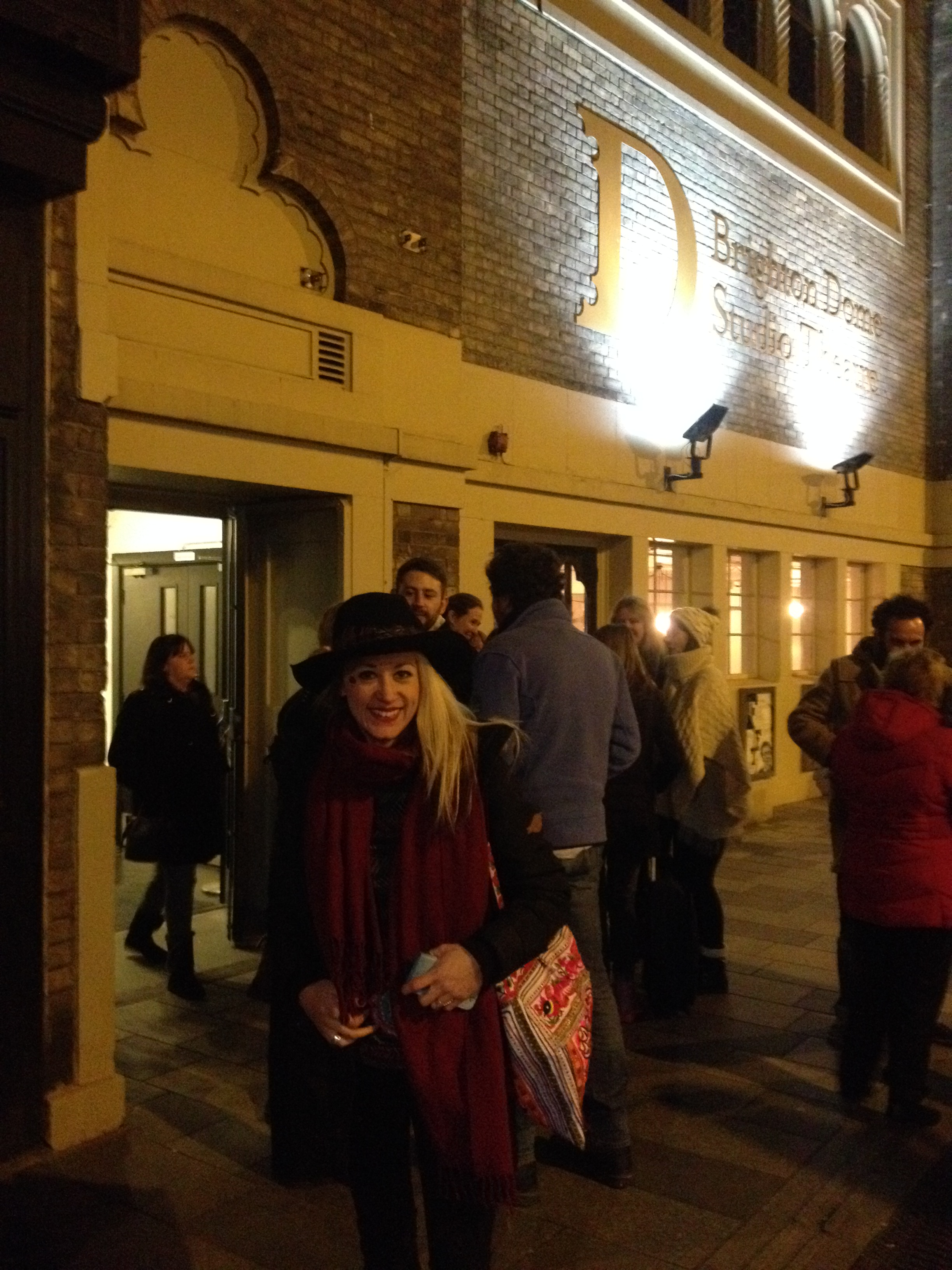 Dhanya looking amazing after her role in ‘The Vagina Monologues’ 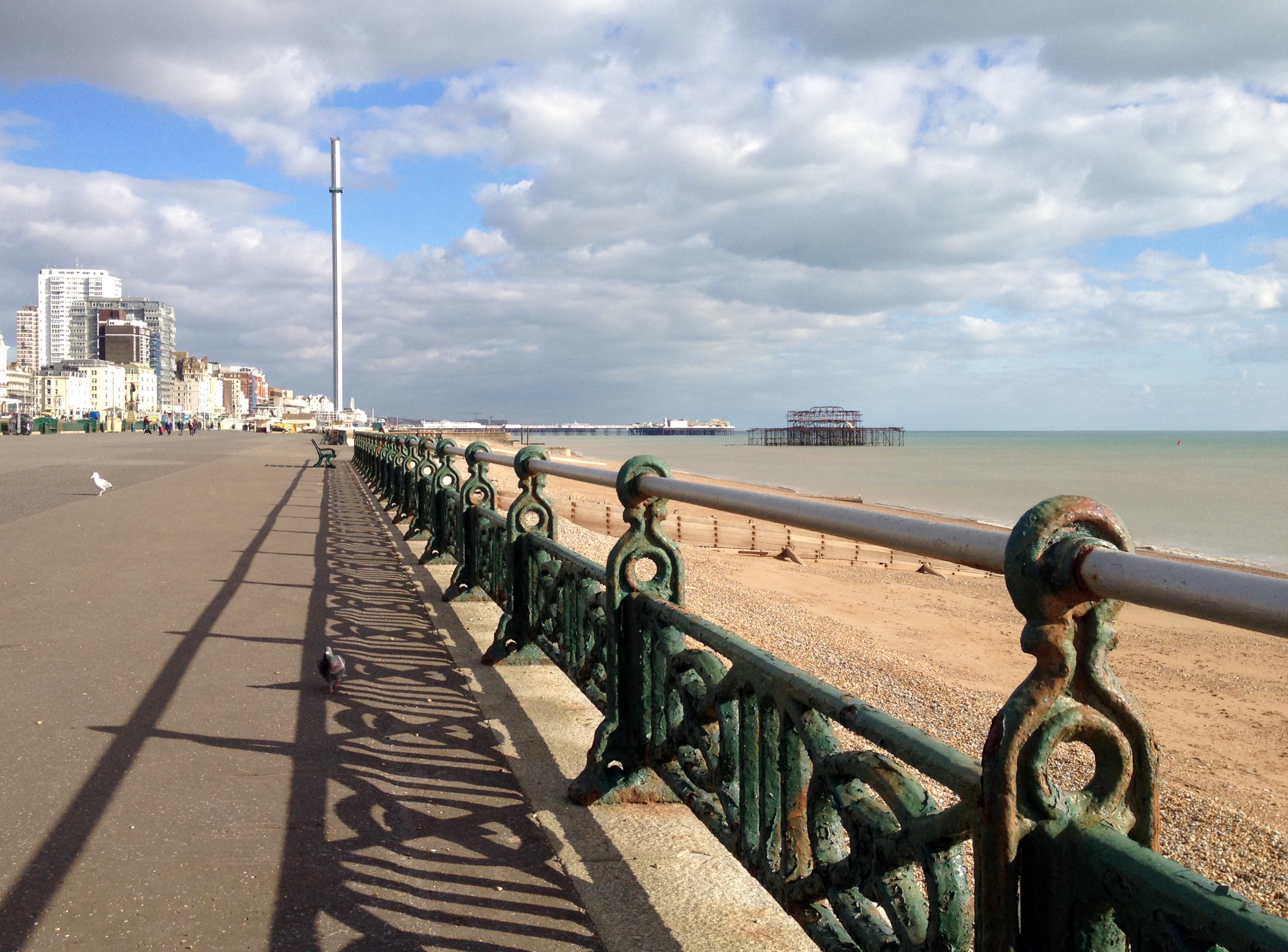 A bracing Brighton day walking along the seafront

Dhanya was working during the daytime, so one day I chilled and walked along the seafront, ‘worked’ another day (I love the flexibility of my coaching business), and cleaned her carpets the on the final day. On a ‘domestic’ break, I had the absolute pleasure of catching up with two beautiful people from Worthing. We’d met El and Dave in Newbury, on the Kennet and Avon in 2010, and had a very pleasant evening with them in Hungerford (here’s the post from then). We’ve kept in touch intermittently since then via Facebook. 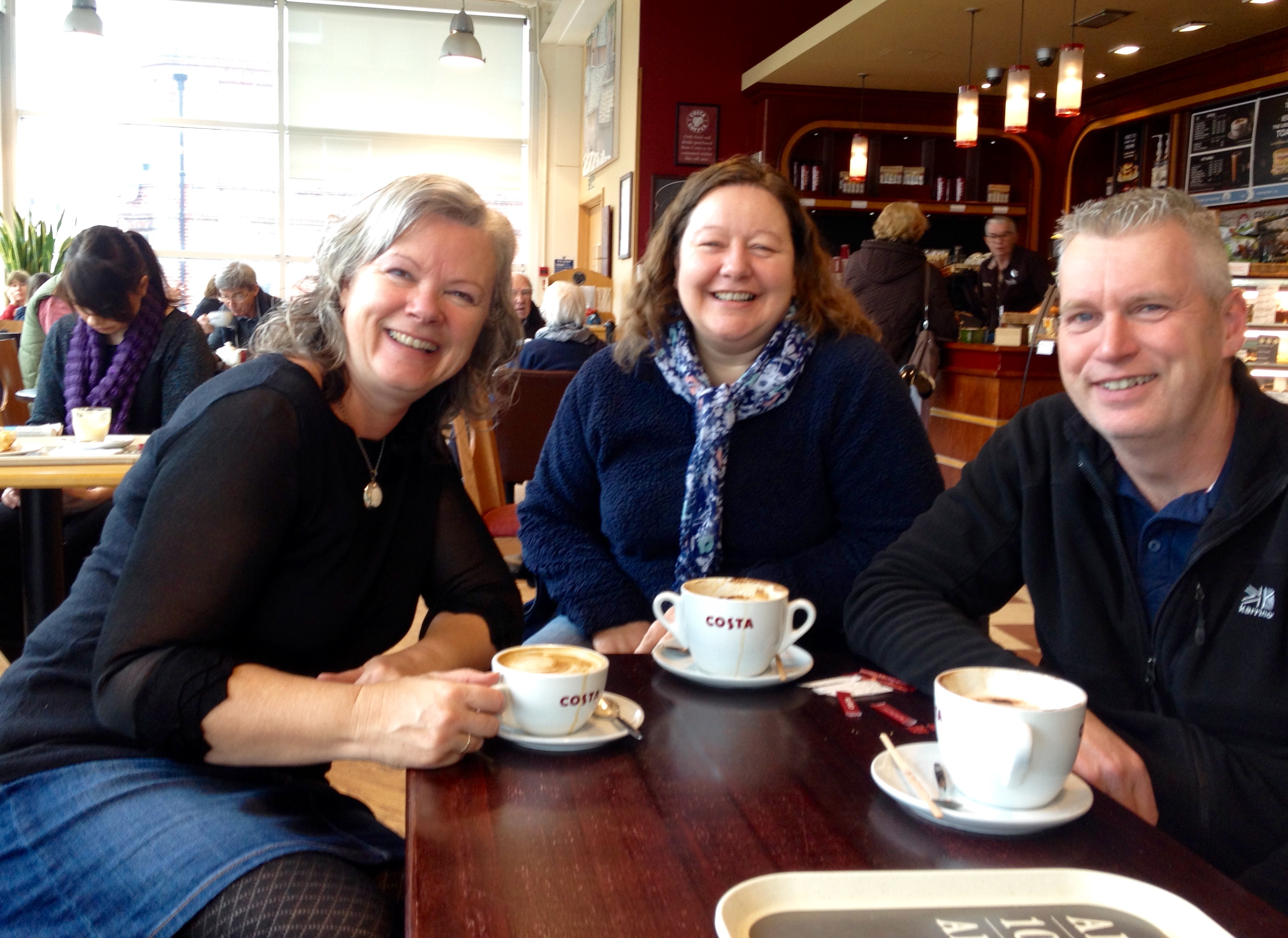 Returning to Barry in Sandbach on Thursday 10th, took five trains over five and a half hours. Fortunately they were all punctual so not a big ordeal – in fact I much prefer travelling by public transport than car in England.

Since then we’ve been blessed with what feels like the start of spring-like weather which is great as we’ve had lots of locks to do! It’s been so mild we’ve not even had to wear coats – yay! Hopefully the worst of the bleak winter weather has now passed … 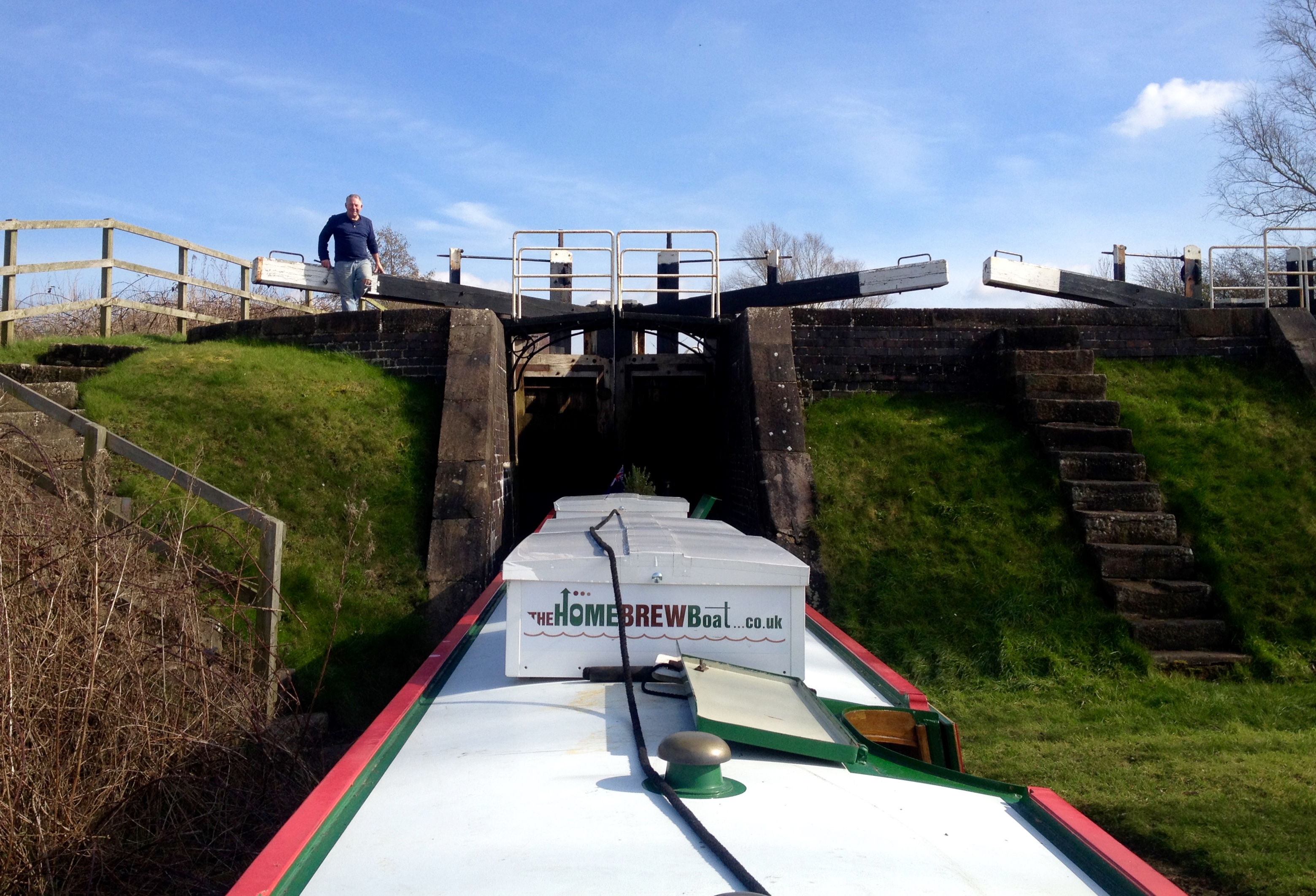 Whilst on the Llangollen Canal Barry had been flagged down by a couple of people asking if he was from New Zealand. They’re fellow kiwis – actually not just from New Zealand, Bekha is from Gisborne! Andi originates in Wales, but had spent the previous 28 years living in Napier, a three hour drive from Gisborne.

What a small world it is …

We caught up with them again whilst doing the Cheshire Locks, and spent a couple of very convivial evenings with them both in the Broughton Arms watching England scrape a victory over Wales in the Six Nations, and aboard Areandare where we taught them the nuances of Six Handed Rummy.

We had an unexpected but perfectly fine delay on Saturday due their boat batteries flagging a little, and Barry helped out with a jump start and a bit of an investigation into the vagaries of their electrical system. They’ve only been boating for a couple of weeks and are heading south.

A lovely couple, we really enjoyed their company. You never know what the next day will bring living on the cut. 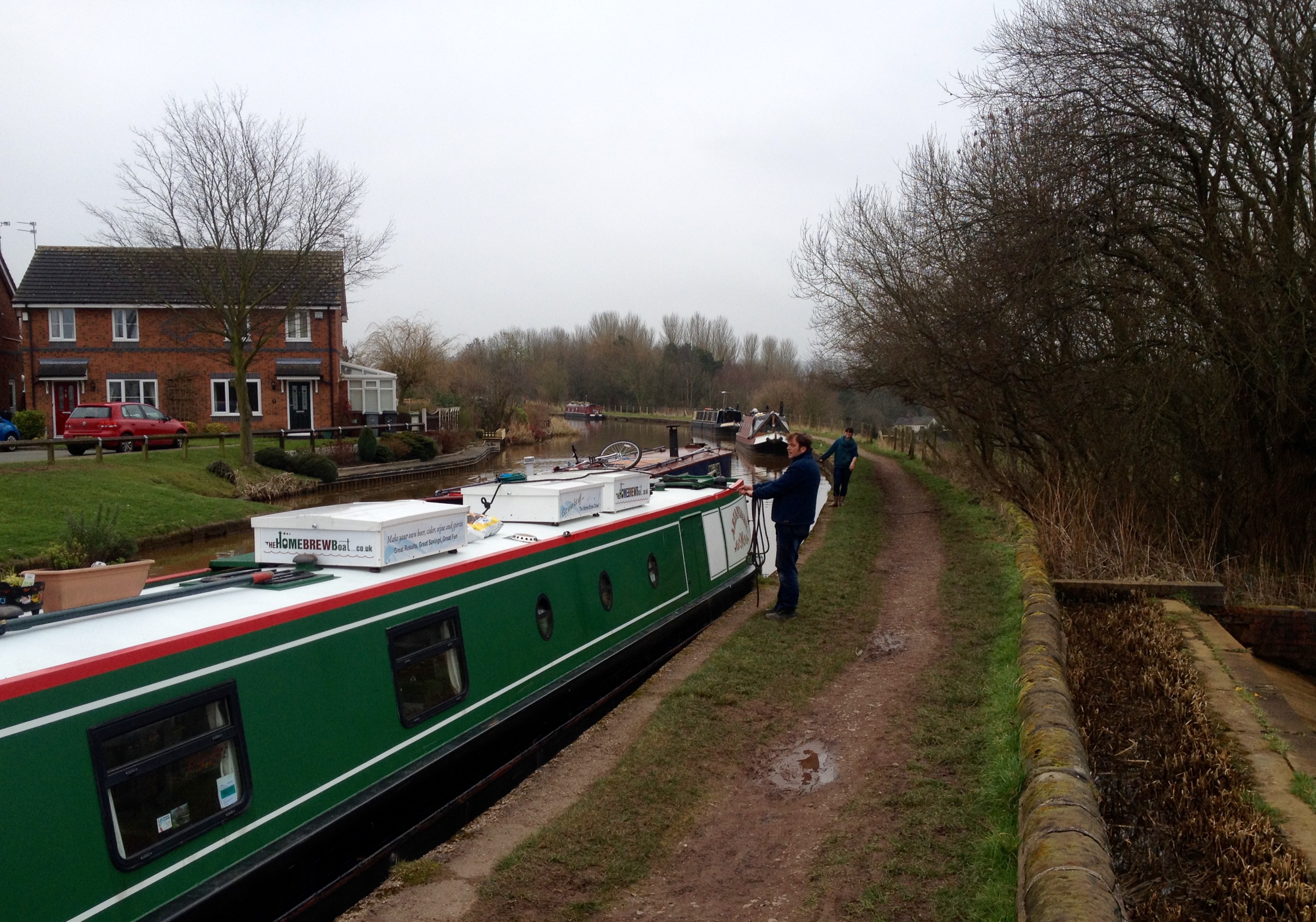 Today, Sunday, we’ve completed the locks and moored up at the start of the Macclesfield Canal. On one of the final locks at The Red Bull pub we came across the fascinating wise old ‘Eagle Owl‘ appearing at the top of this post – apparently this species is the largest of the owl family in the world. What a hoot!

We’re heading up to Whaley Bridge, where our first trading festival for both The Home Brew Boat and Funtastic Facepainting will be over Easter weekend at the Buxworth Community Gala.

We’re feeling the excitement build in anticipation of actively trading again in the near future.

You won’t be surprised to hear that prior to that I’m jumping ship again for just over a week – on Thursday I’ll be catching a train or two to mum’s for a few days, then my three sisters, mum and I are spending four days up north in Sunderland to celebrate mum’s 83rd birthday in the town she grew up in.

Never a dull moment for me it seems …

2 thoughts on “Grindley Brook to Rode Heath via Brighton!”