It was a long journey ‘home’ from Aotearoa last week, especially as I’d left Gisborne sobbing.  It turns out taking mum was one of my best laid plans – it meant I had no real choice but to get on the plane! The temperatures of between 25 and 35 degrees centigrade are so appealing when it’s more like minus 3 here in England …

While in NZ, I started a private blog with photos and stories of mum’s adventures, currently being made into a book (magically by a company called ‘Blogtobook‘). I did the same for Barry in 2009 for part of our six month journey. It’s fantastic she now has stories to tell people, of her second adventure in NZ. My three sisters and I have another soiree planned for her 83rd birthday at the end of March, to Sunderland, where she grew up.

Barry was at Heathrow to meet us – five weeks is a long time to be apart. We stayed a couple of nights with mum to get her settled back home (her cat was unbelievably nonchalant about her return), then caught a couple of trains back to Areandare.

The boat was moored at Chirk, at the Wales end of the tunnel. We’ve not been on the Llangollen Canal since our first narrow boating adventure in April 2009. Quite a treat before the festivals begin at easter.

I remember travelling across the Pontycysytlle Aqueduct then, and not being terribly fazed by it. Until I woke up in the middle of the night in a cold sweat, imagining what could have happened had I lost my balance (of course Barry had skipped off to take photos leaving me alone). 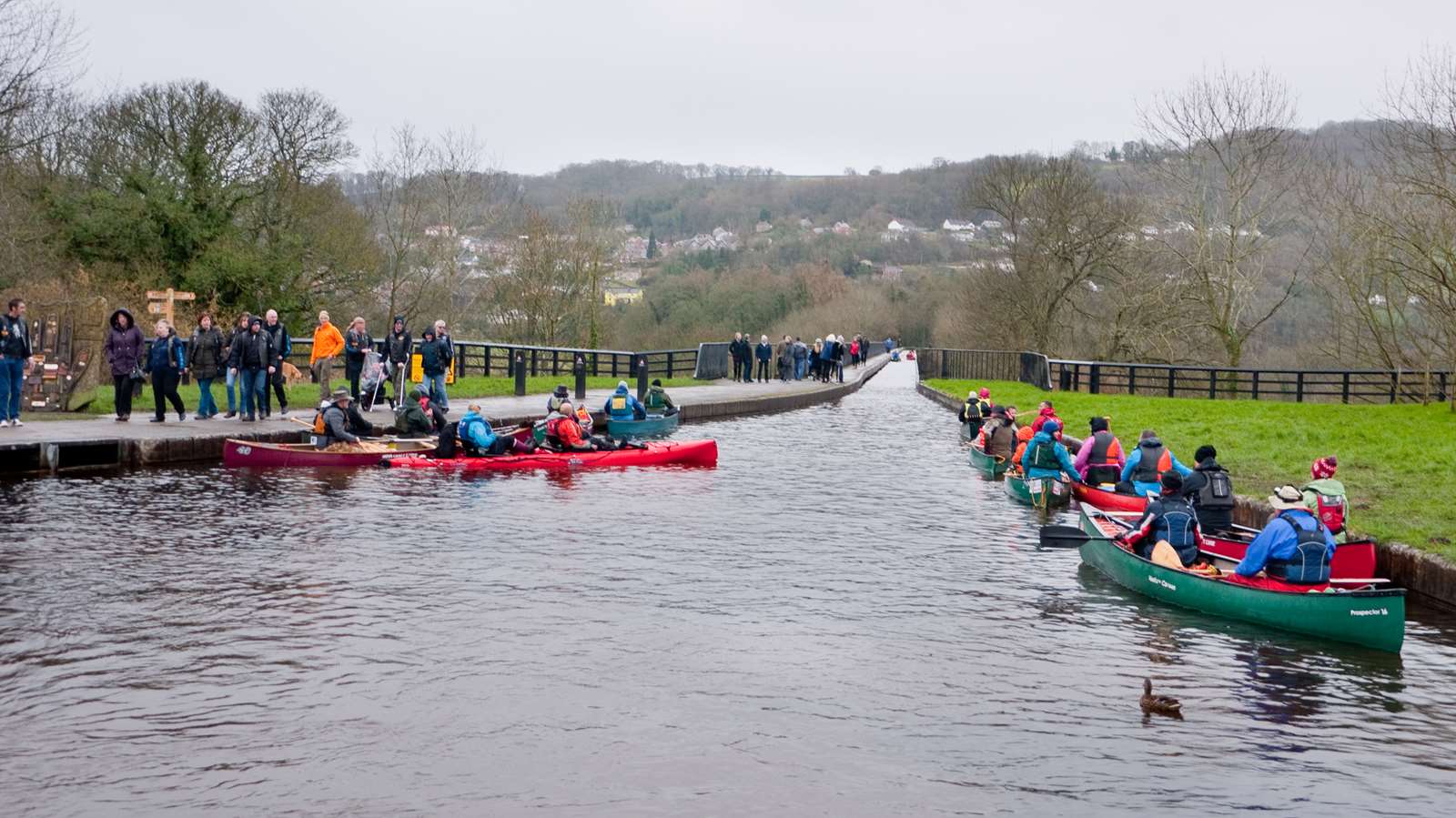 Looking over the aqueduct from Trevor – even braver going across in a kayak!

This time I was all too aware of the sheer drop to the side, and felt quite sick! So much so that on the second journey (we went across and back five times altogether over three days!), I chose to stay inside the boat, cowering.

By the fifth time, I’d coached myself into recognising where the fear was from and how unfounded it was – I’d never over balanced before on the back of the boat and was highly unlikely to now just because if I did it would be fatal. Our minds can be like runaway trains if we give them enough steam!

I managed to drive the boat, by recognising and accepting the fear, standing on the towpath side without looking down. One has to be sensible I decided –  Barry then did his usual photo shooting. 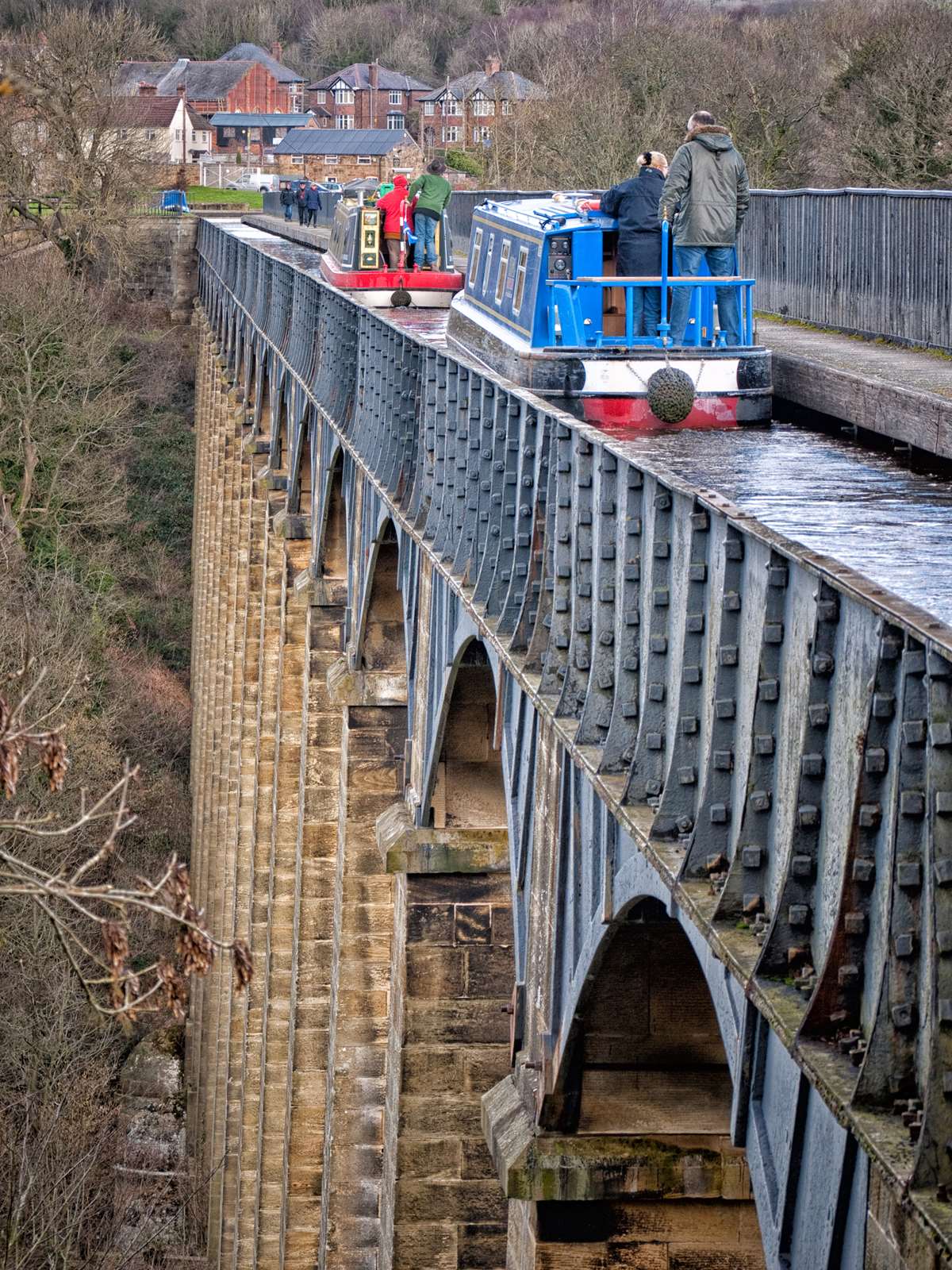 There’s a bit of a drop on one side as you can see! 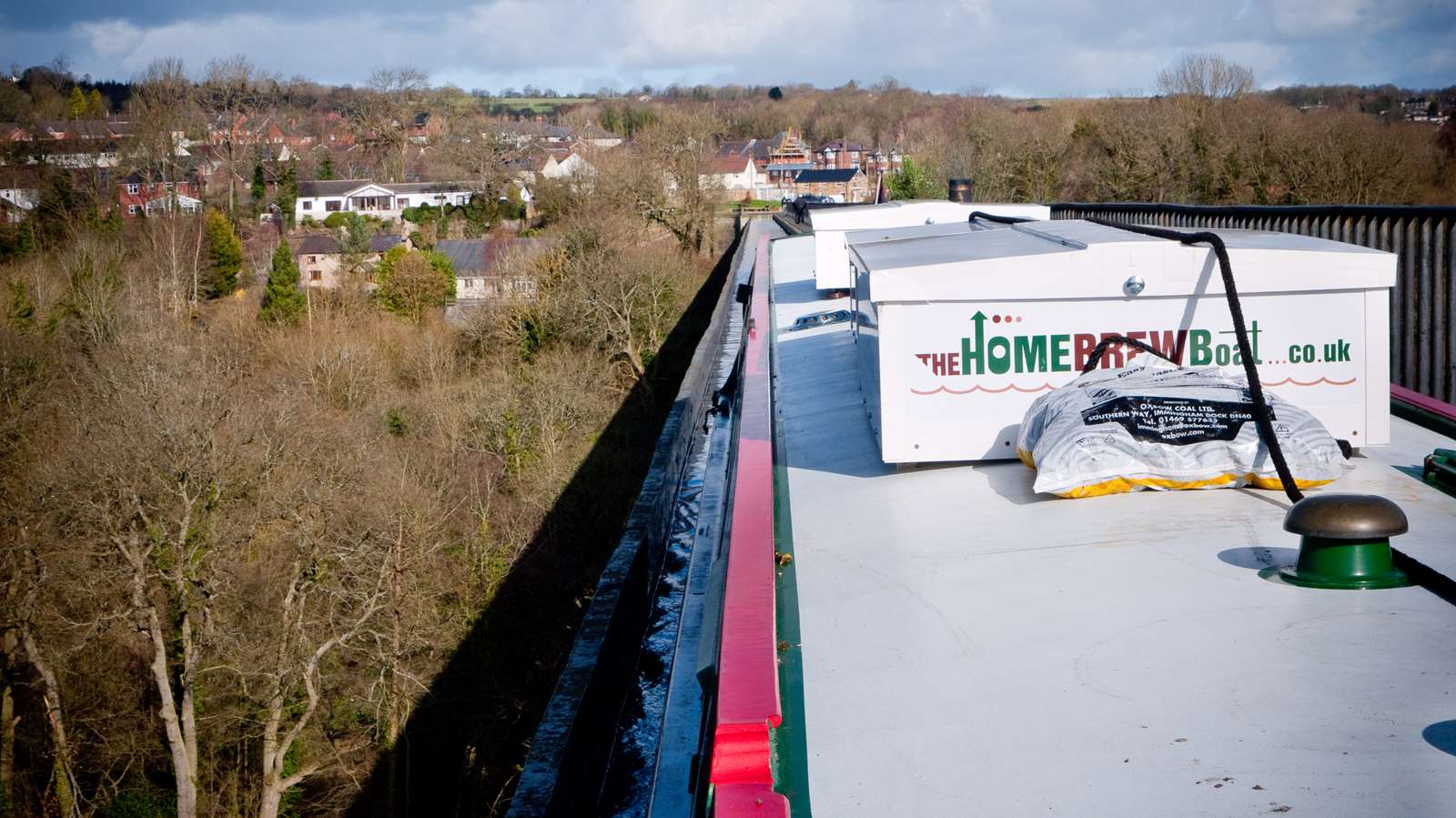 I think this is one where Barry’s driving, I’m inside, and he’s taking a photo, crazy man 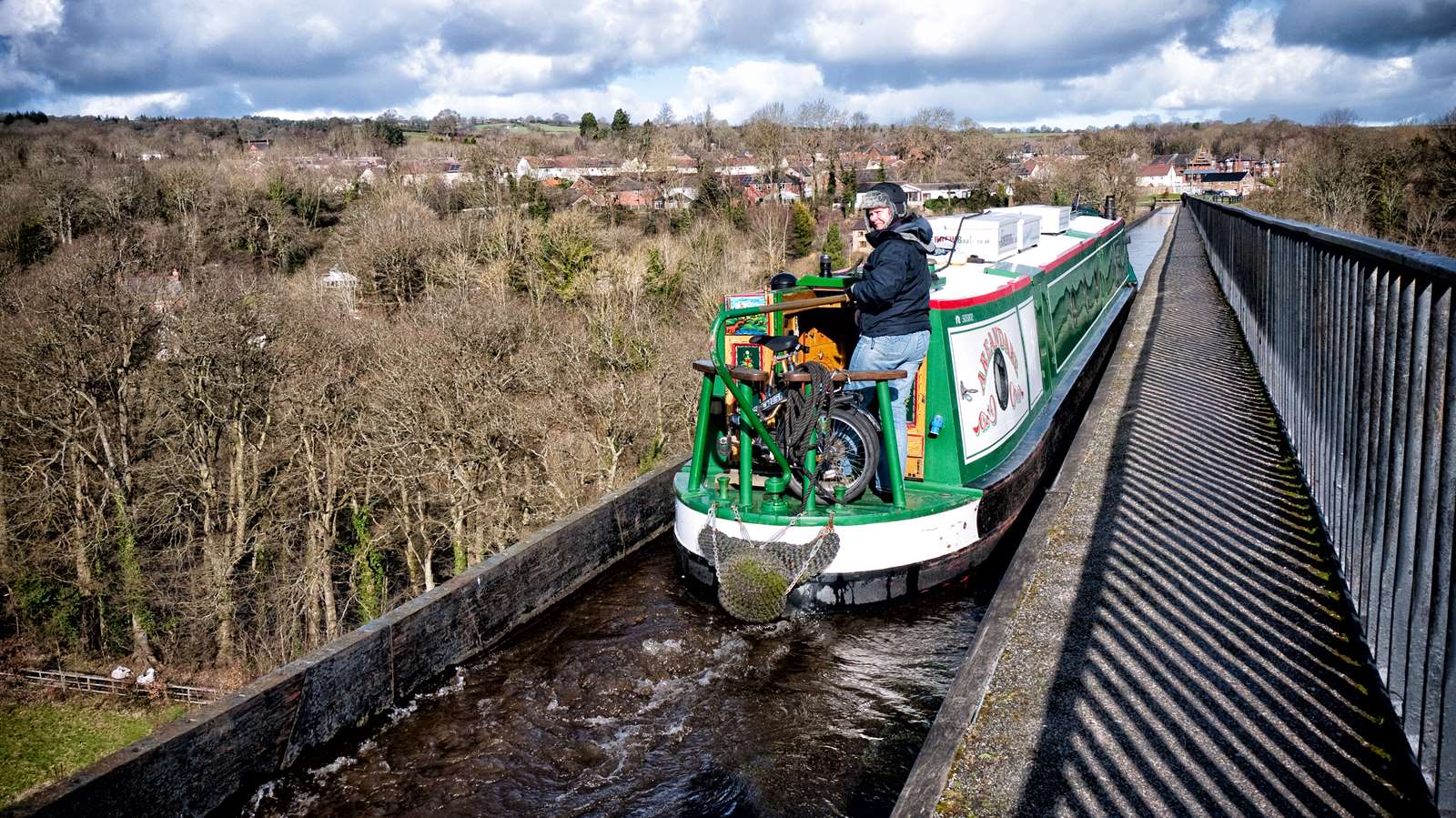 Just to prove I did overcome my fear … 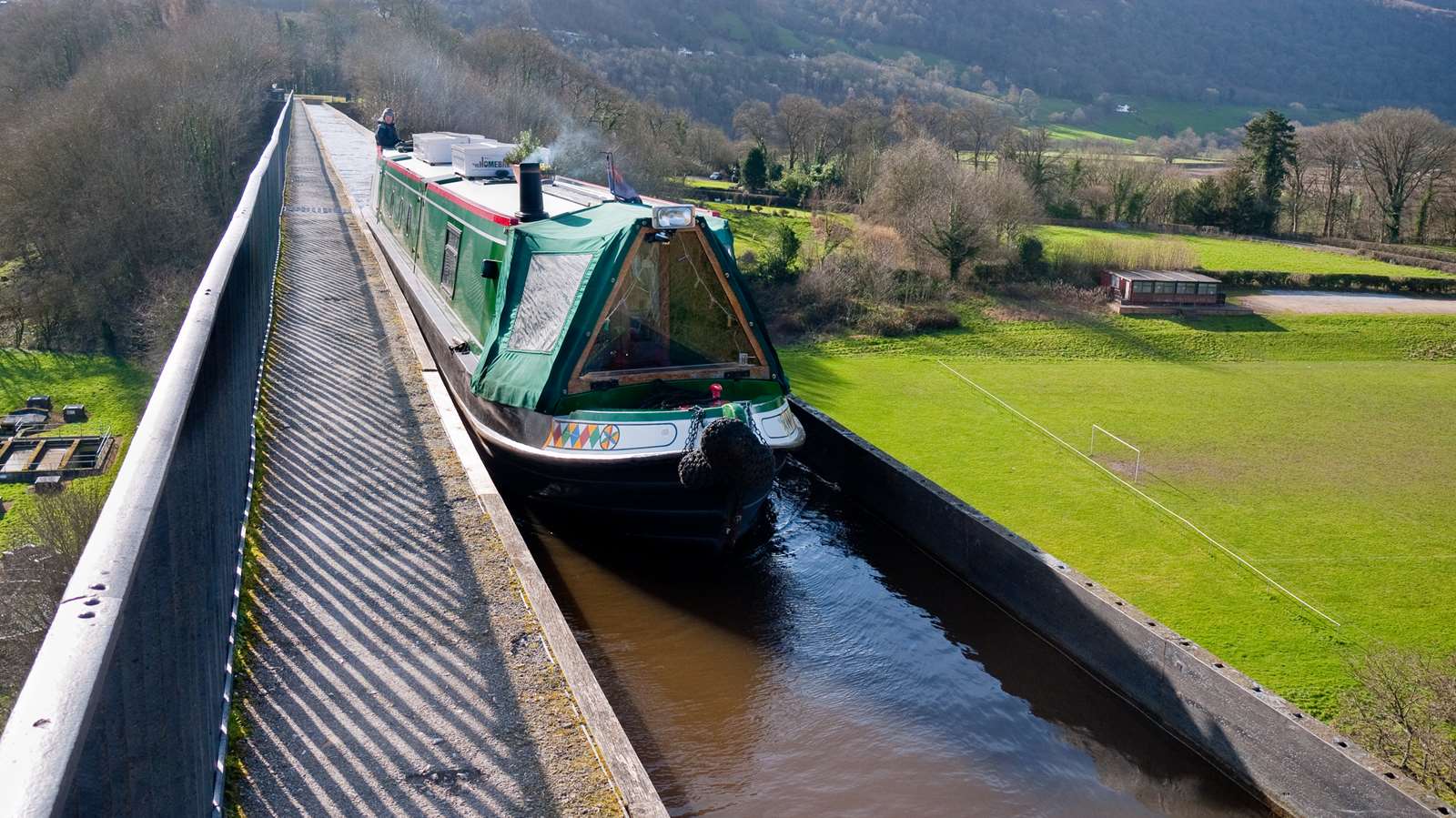 And again, leaning cautiously towards the towpath side 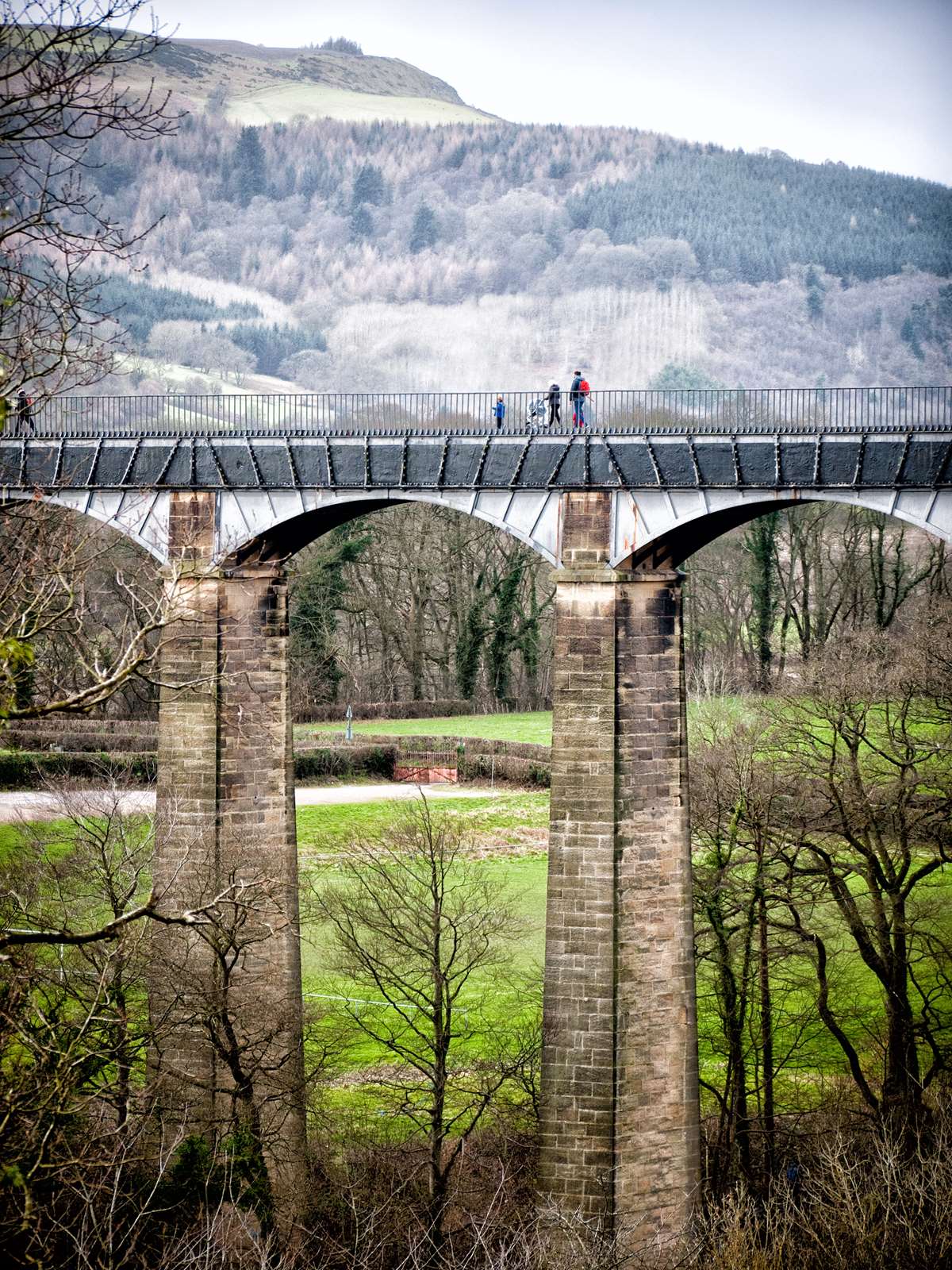 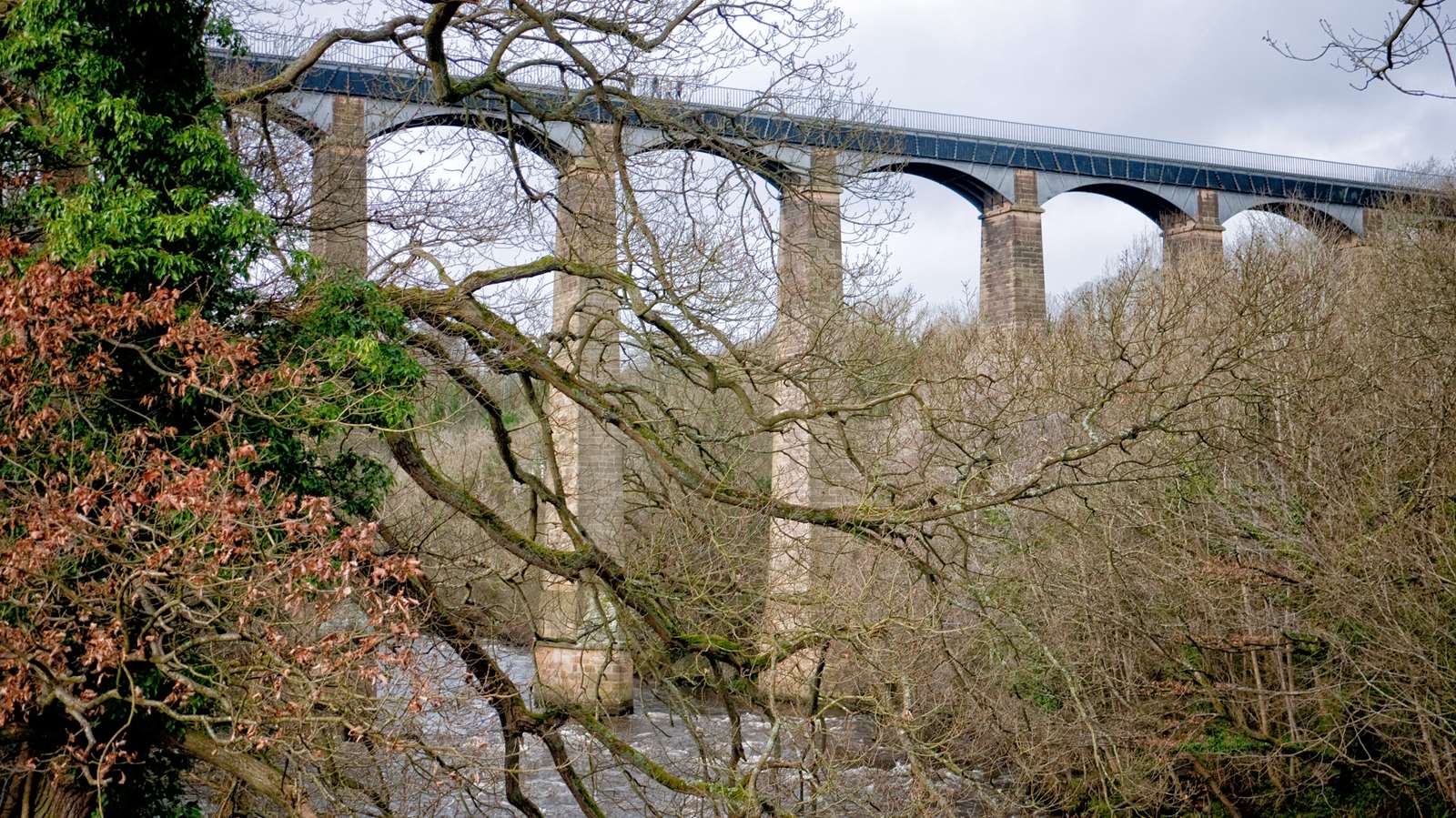 Looking up from the River Dee

Our grandson had his first boat sleepover last Saturday night – which made leaving Gisborne worthwhile. We had fabulous fun, Barry watched Minions, Hotel Transylvania, and even sat through Frozen!

Having travelled over the Aqueduct with him and Lisa, and our other gorgeous grandson, we walked down the valley and gazed a the incredible structure from below too. 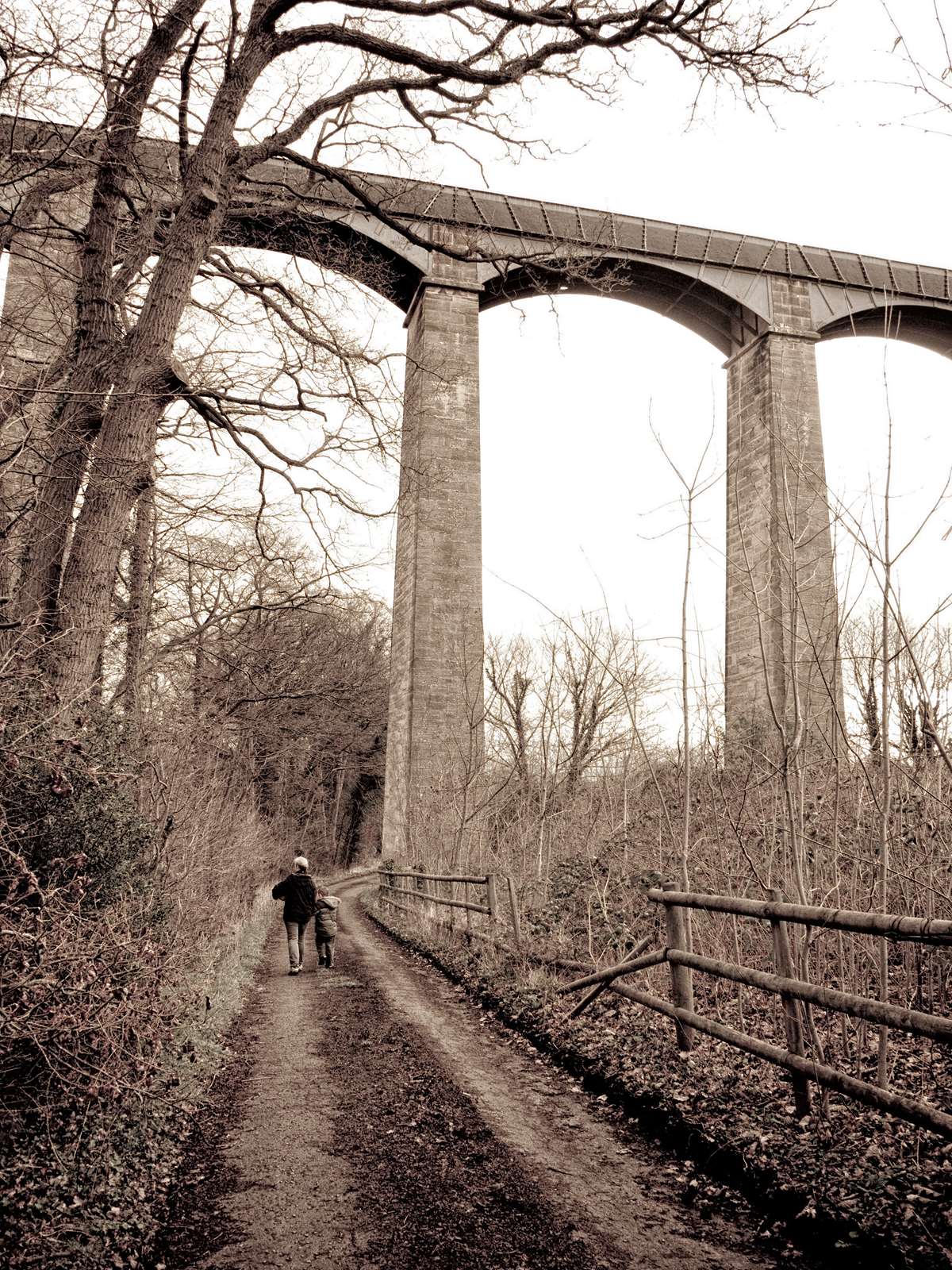 Walking under the aqueduct – precious moments

On Monday removed a short distance and moored in Llangollen, not far from the beverage boat. It’s very quiet around here, probably the best time to visit before the hoards arrive – the most popular waterway on the system I believe. 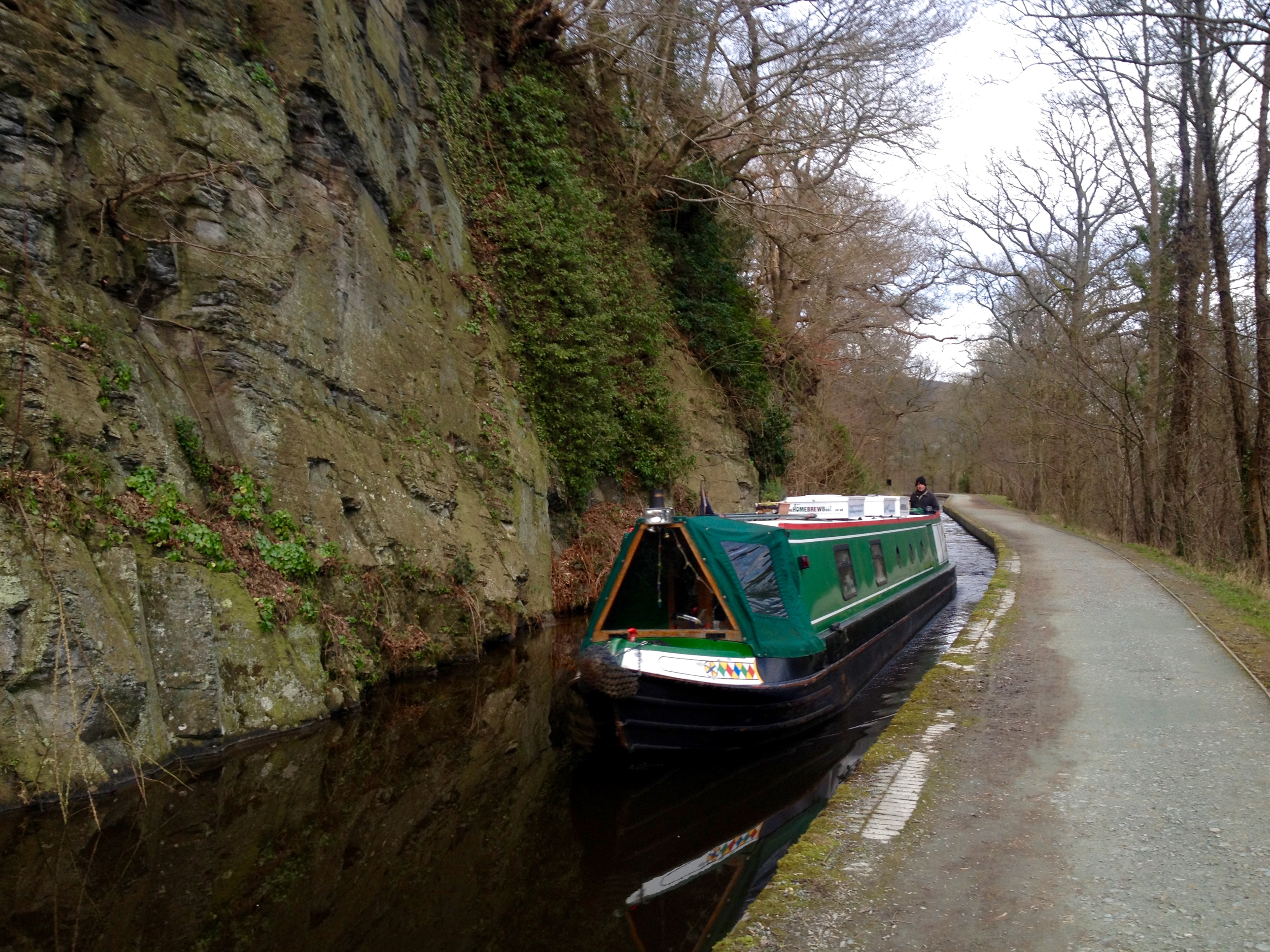 We had an energising walk to in the crisp winter air to the Horseshoe Falls on Tuesday (constructed by Thomas Telford to feed water from the river Dee to the canal), well worth doing but a decent distance – around five miles there and back. We’d been recommended to continue on from the falls to an incredibly quaint church (Llantsyllio), carpeted in snowdrops blanketing the souls resting in the graveyard (Barry hasn’t edited those photos yet!). 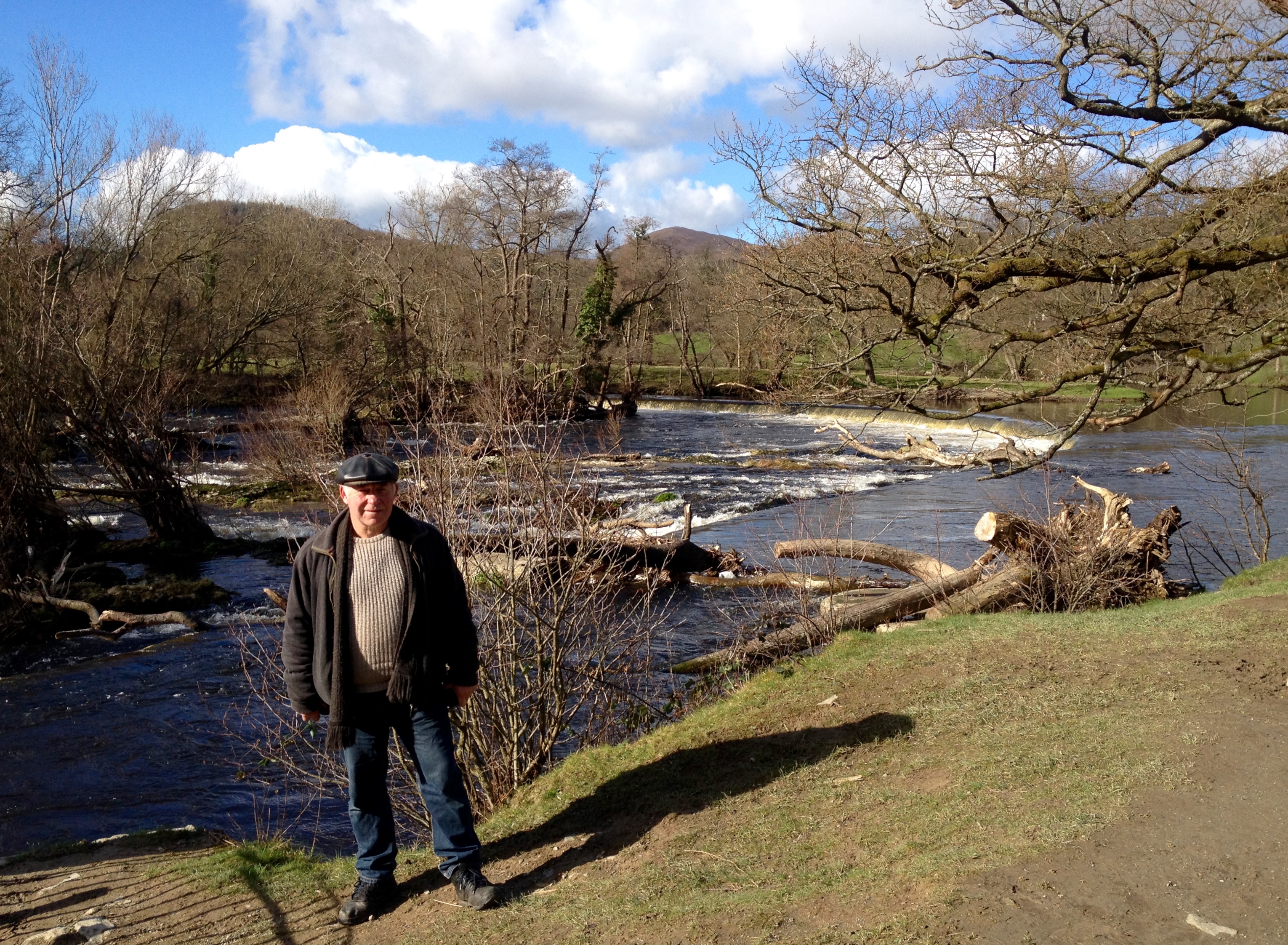 In the church grounds we met a delightful couple from just outside Chester, who we found a commonality with as their son married a woman from Jakarta, has two children and can’t return to England with her due to the complexities of the UK spousal sponsored visa requirements. We felt rather fortunate that at the moment we’re managing to navigate the complexities of it and have the choice to stay here (fingers crossed for July of course!).

On a completely separate note, we’re beginning to understand more the views of some boaters that cassette toilets are the way to go. On Sunday the motor on our vacuum pump-out burnt out, probably due to our domestic batteries not charging too well. We’ve a strong suspicion the six we bought two years ago weren’t fully charged, and it’s not helpful the Inverter isn’t performing as it should. Looks like more money will be leaching out of our depleting coffers …

The past few days are the first time we’ve used the cassette that came with the boat, having avoided it previously. To be completely honest it’s not as horrendous as I imagined! Not that I’m going to be doing any of the emptying I hastily add. Barry’s done it once now, and categorically feels we’ll be sticking with the pump-out thank you very much.

It’s helped being near the facilities at Llangollen, though we’re moving today back to Trevor in the hope that we can sort the ablutions challenge out satisfactorily before our grandson comes for another sleepover tomorrow night. We picked up a new motor yesterday, which worked for five minutes then mysteriously stopped again.

Oh the joys of living aboard a narrowboat …

13 thoughts on “Readjusting to the Northern Hemisphere in lovely Llangollen”