In twelve hours time I’ll be sitting on a rather large plane with mum, soaring high above England as we commence our New Zealand adventure together.

Checking in on-line last night I discovered we’d been upgraded to Premium Economy from Singapore to Auckland which sounds amazing – not sure how that happened! We’ve got a long stopover at Singapore airport, purposefully booked so we can stay at the Transit Hotel, lie down and sleep in the middle of the long journey, and have a swim in the rooftop pool.

It does feel rather strange to be heading to Aotearoa without Barry, I shall miss him heaps. I know though that he’ll be fine. He’s back in his element travelling along the cut, in spite of the cold and wet, and I’m certain he’ll be catching up with many people.

A few fraught moments and capturing some magical ones

Last week didn’t quite go to planned after I spent a whole day trying to get my iPhone to work after an update. I didn’t manage it and spent a couple of days phone-less which was rather weird and liberating all at once! It’s quite scary how much I rely on technology, and I know I’m not alone.

Long story short, the Genius’s at Apple in Birmingham fixed the fault – caused by putting in a battery bought off the internet rather than with Apple. Lesson learned, I shan’t be doing that again. Not only is it my phone, it’s the only camera I possess! I’ve got Global Roaming with Three and can use it exactly the same as I do in England. The only extra charges will be if I text or phone anyone in NZ. Incredible isn’t it? Let’s hope it’s not too good to be true – I shall be keeping a watchful eye on it in case there’s a hidden catch …

Talking of photos, Barry’s given me some from our recent hovercraft trip to The Isle of Wight that I bought him for his birthday. He’d mentioned in a passing comment a few weeks before 6th December how neat (a kiwi term!) it’d be to experience such a journey, and as a man who is extraordinarily difficult to buy gifts for (he’s not at all into image or ‘stuff’), I locked it in and took action.

I don’t have much time to spare for words, so I’ll let the pictures do the talking and may do a spot of blogging from Down Under in the coming weeks … 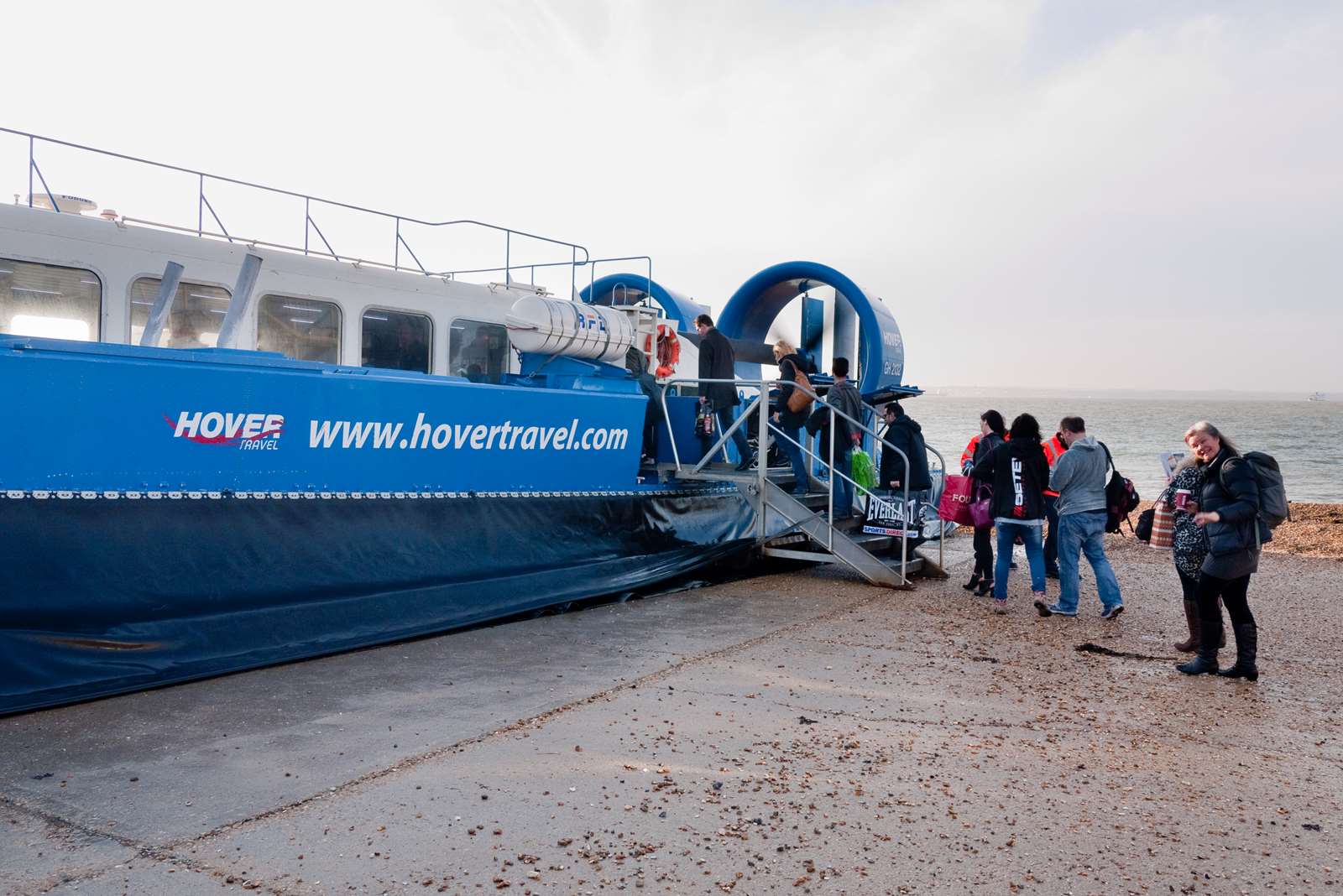 It was a very early start, leaving Brighton at dawn for Portsmouth (Southsea) on 28th December. The 1015am hovercraft on the only service still running in UK we believe Hovertravel. 2015 marked their 50th season – their triumph is being able to land right on the beach as the craft can travel in low tides and high. 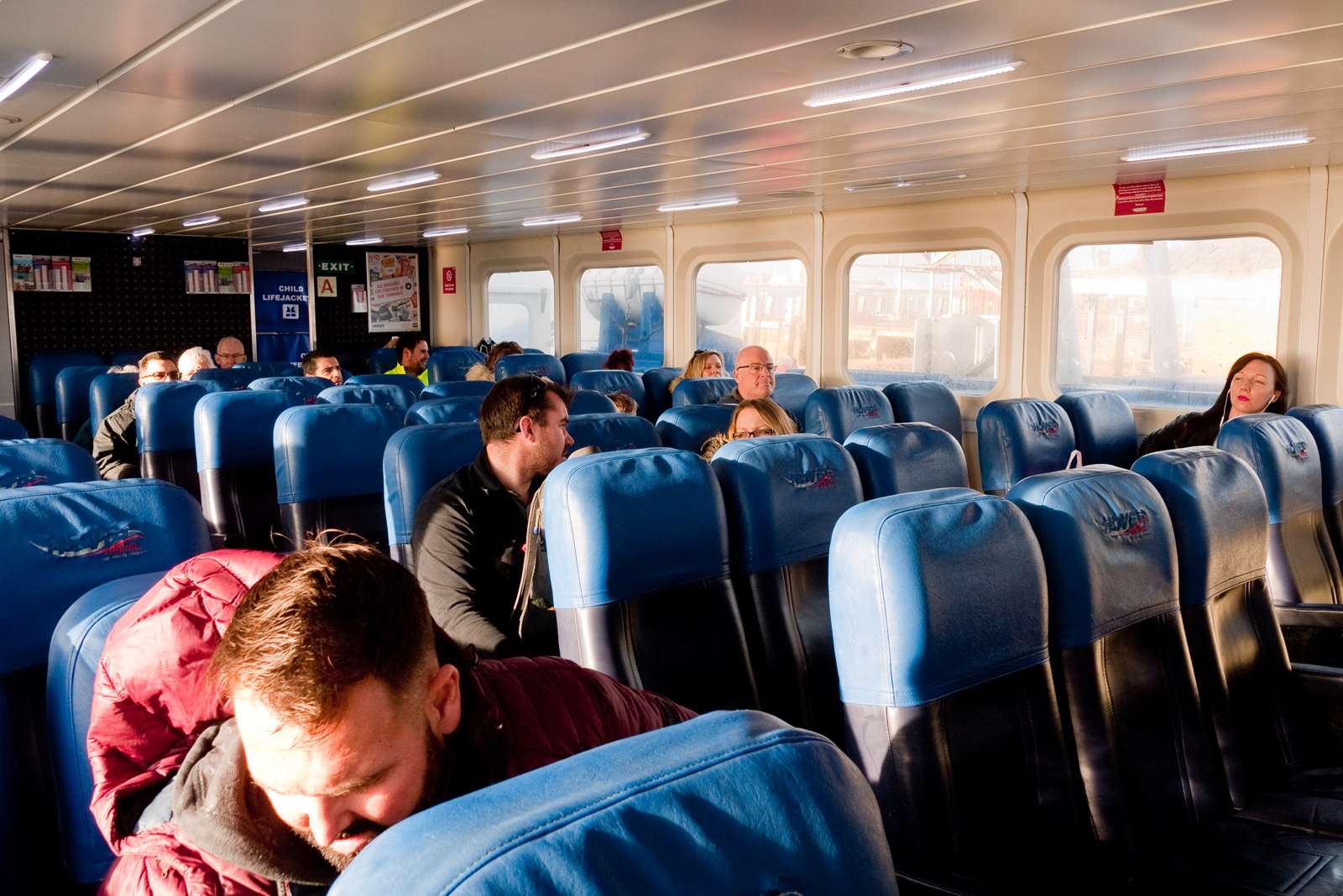 Around 90 passengers can travel on this hovercraft. Not so many accompanying us – quite the reverse from Ryde to Portsmouth as there was a special offer on and they’d had to put an extra trip on due to so many bookings (islanders wanting to get to the January sales I expect …) 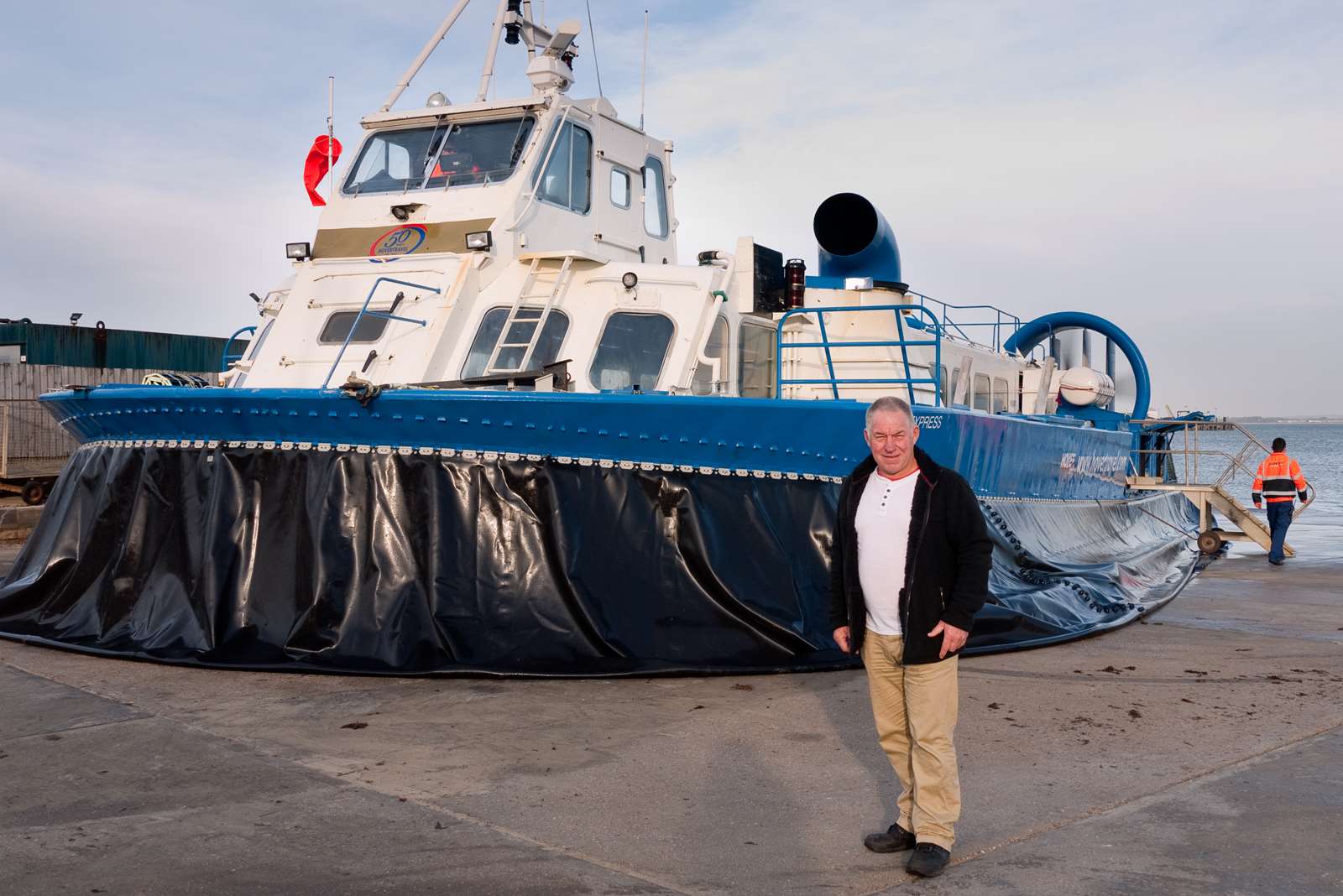 Arriving a mere 10 minutes later, we were blessed with an unseasonably mild and fabulously dry and sunny day. I think the look on Barry’s smiley face says it all – he loved it! 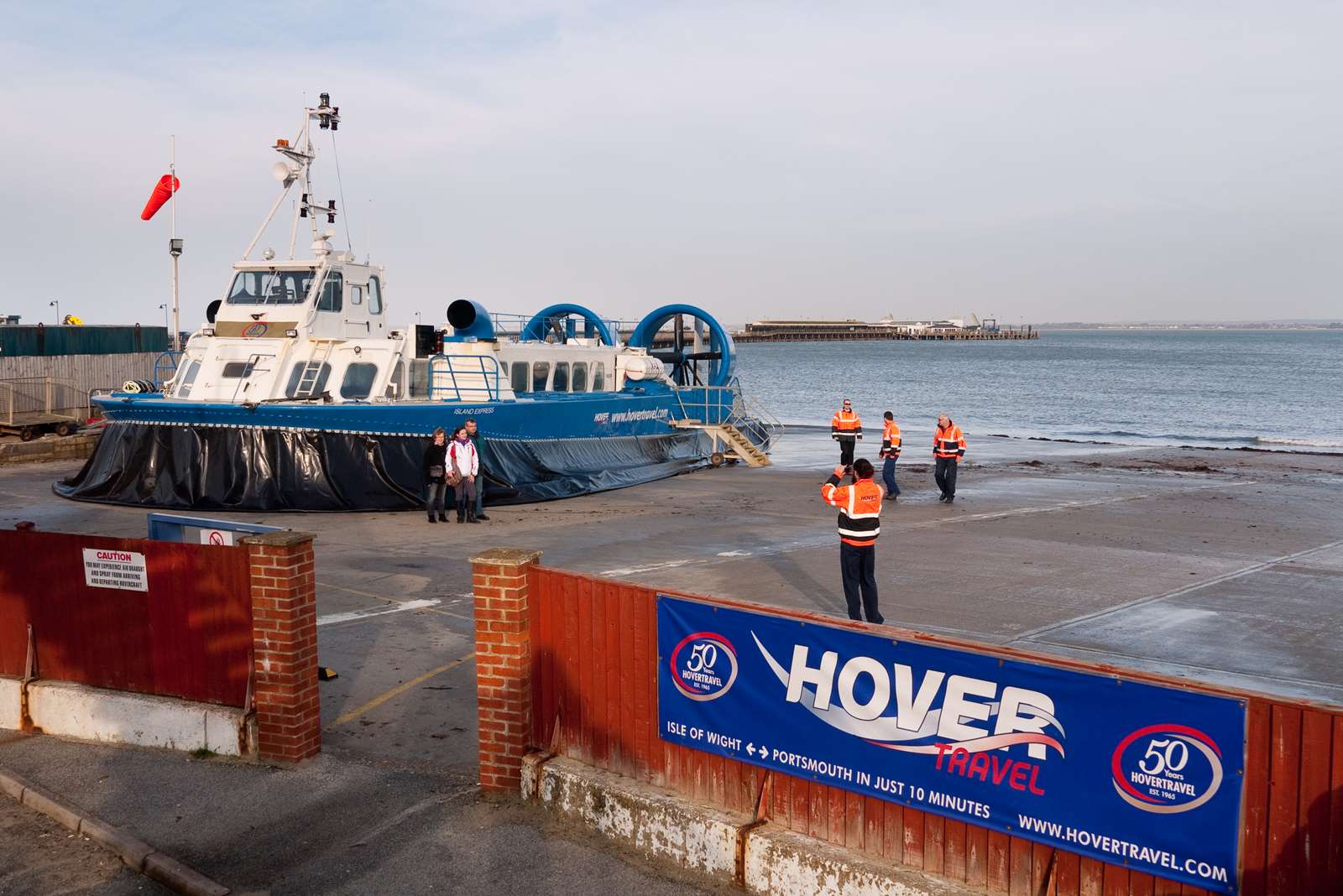 Hover travel crew take photos of embarking passengers – we didn’t grasp that opportunity sadly. I’d bought a hover-rover ticket, which included all day bus travel. The bus station was adjacent to the hovercraft terminal – so simple! 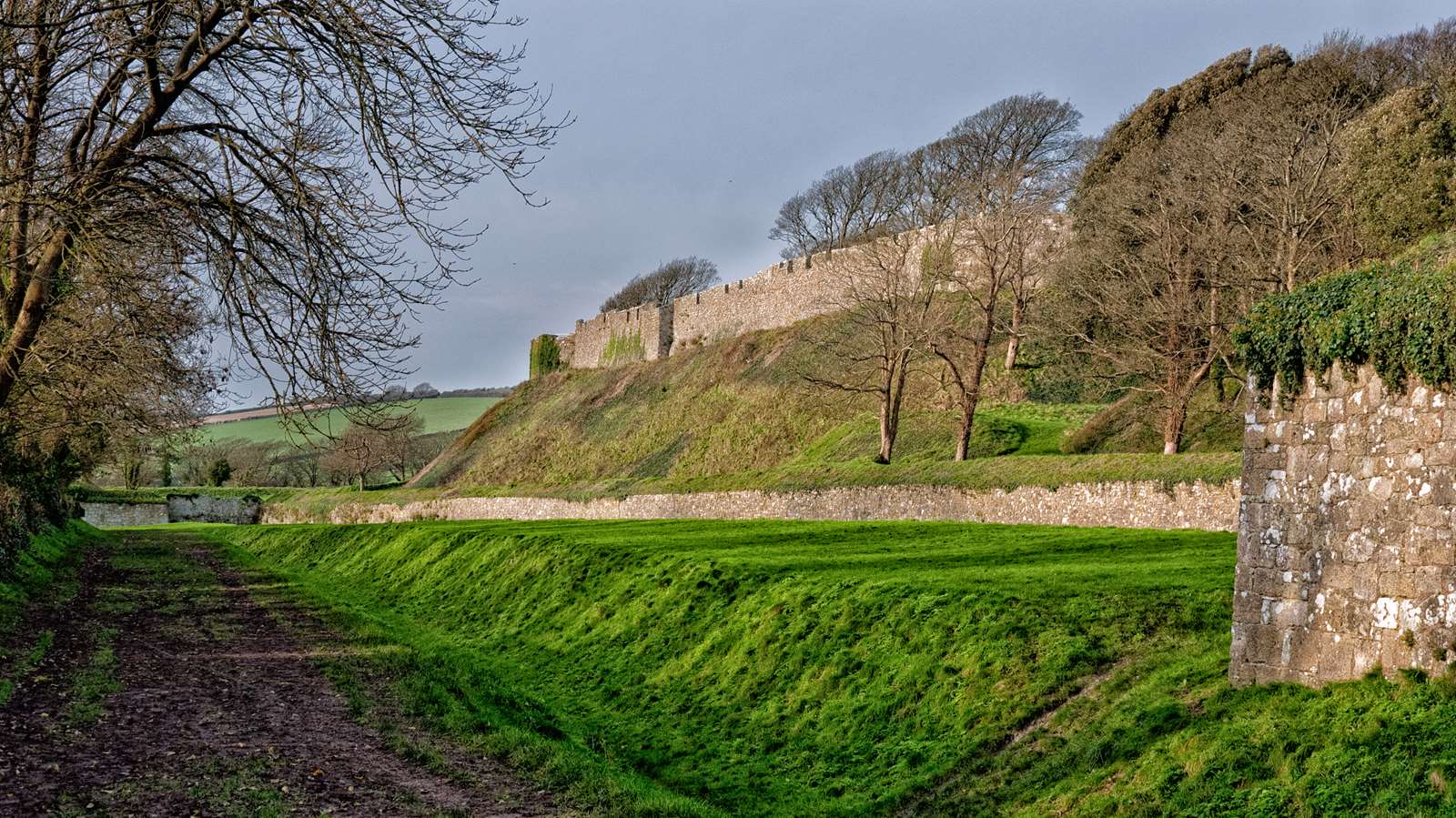 No surprise, Barry chose the castle and stately home tour. Carisbrooke Castle first. We walked all around the castle walls and moat … 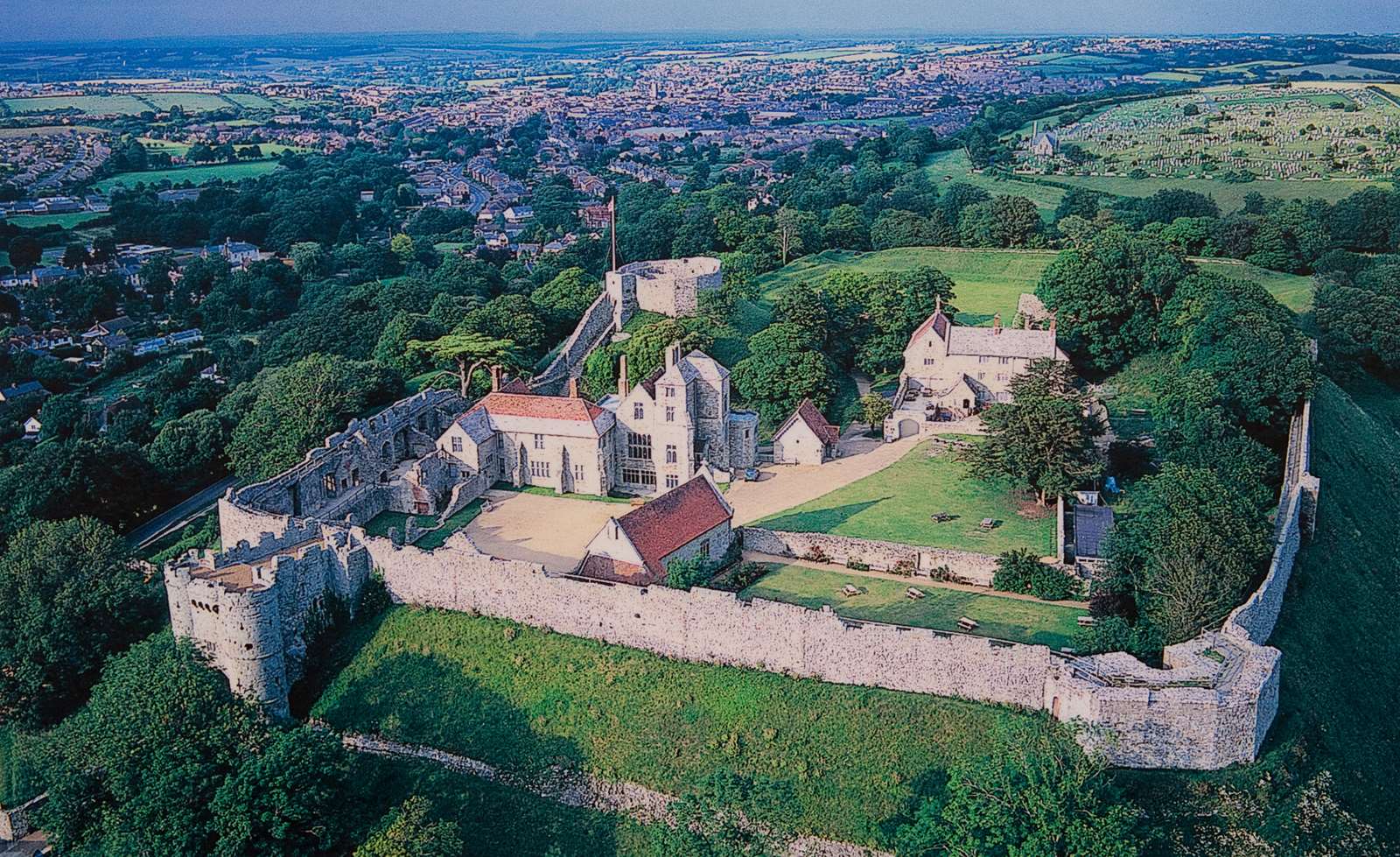 … and I’m pretty certain Barry pinched this shot from a board, unless he’s got a secret drone … 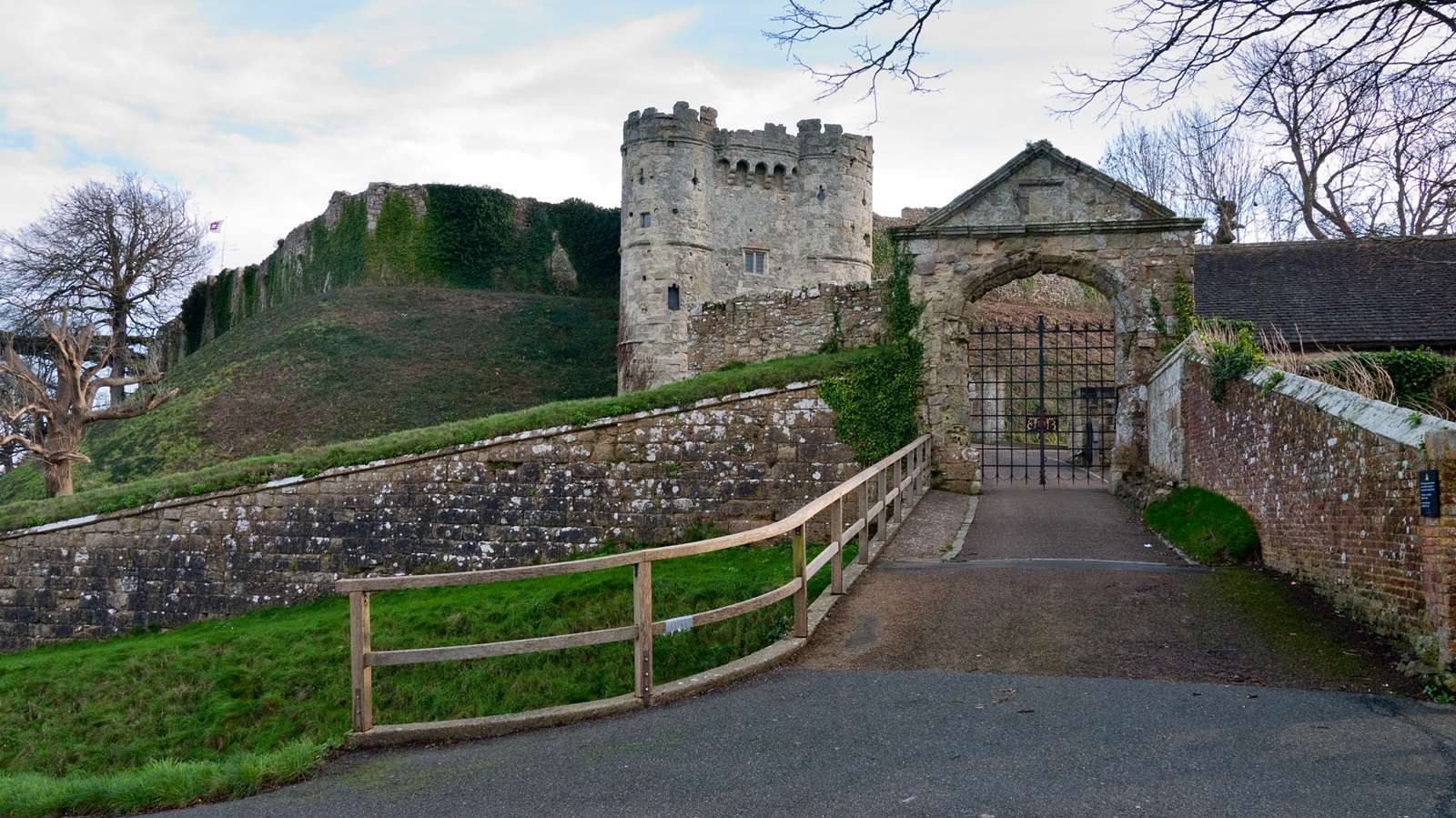 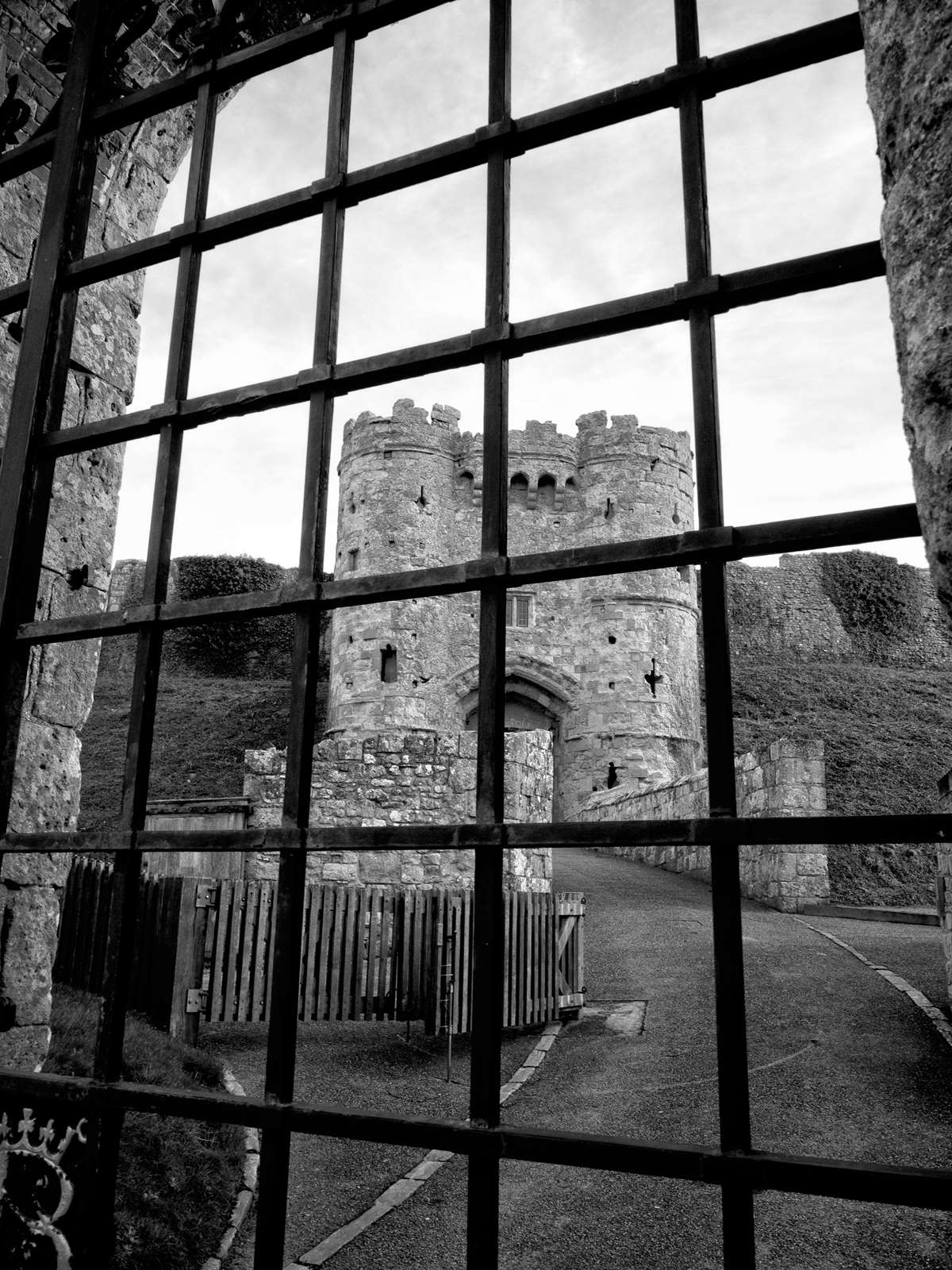 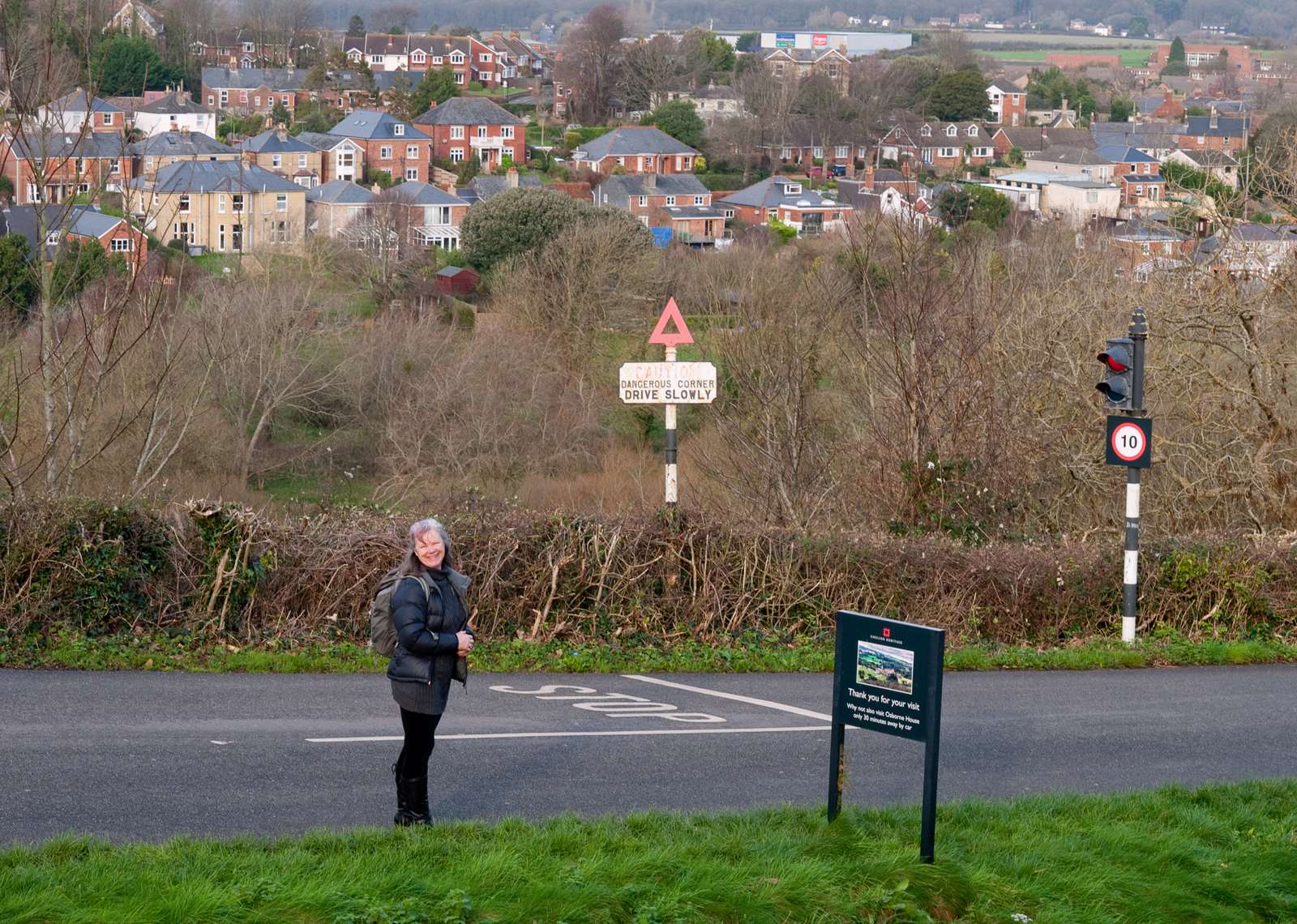 Maybe this is where the name originated? Probably not, but we did love this ‘road’ that villagers seem to have to traverse by car depending on their location 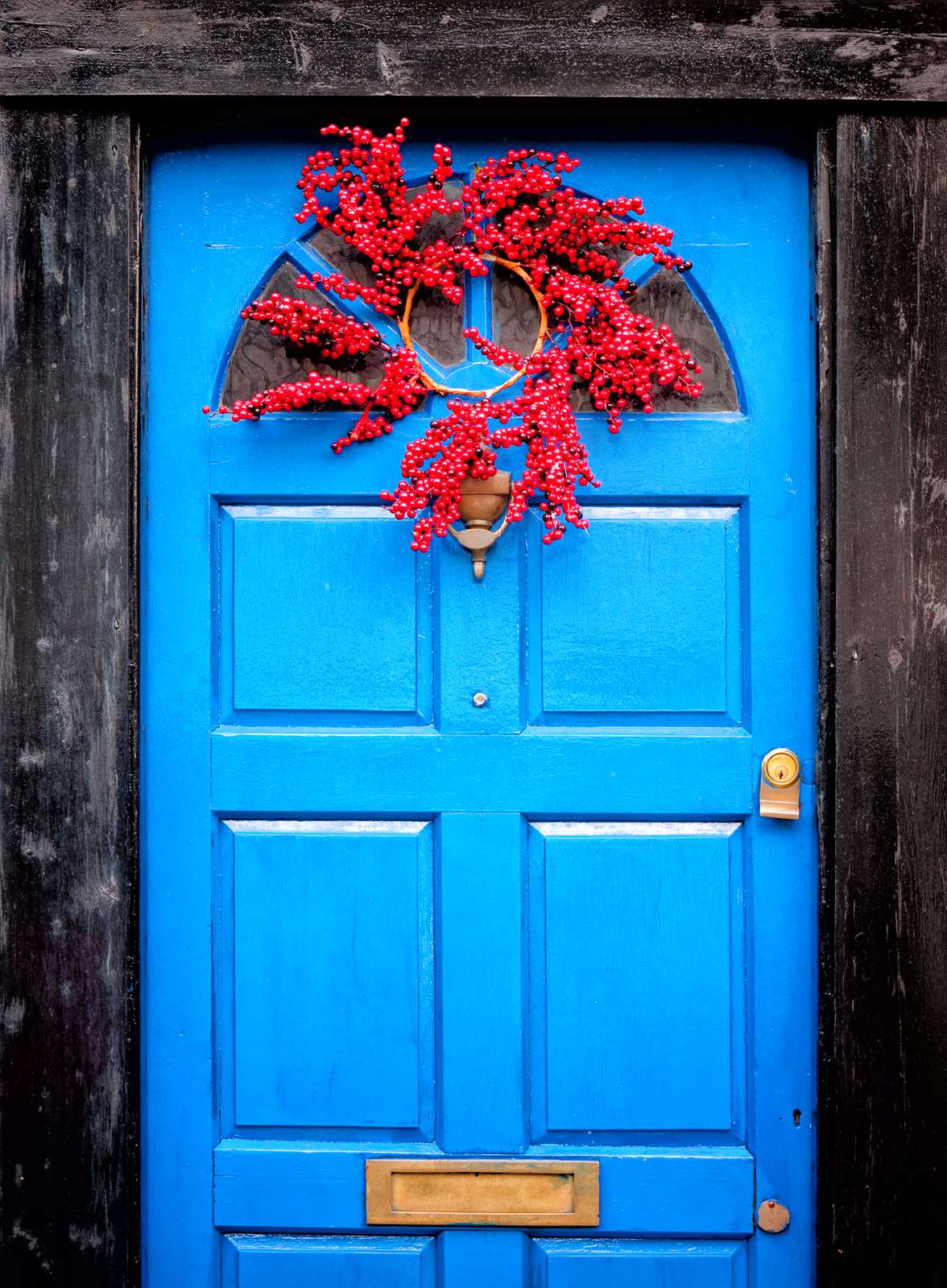 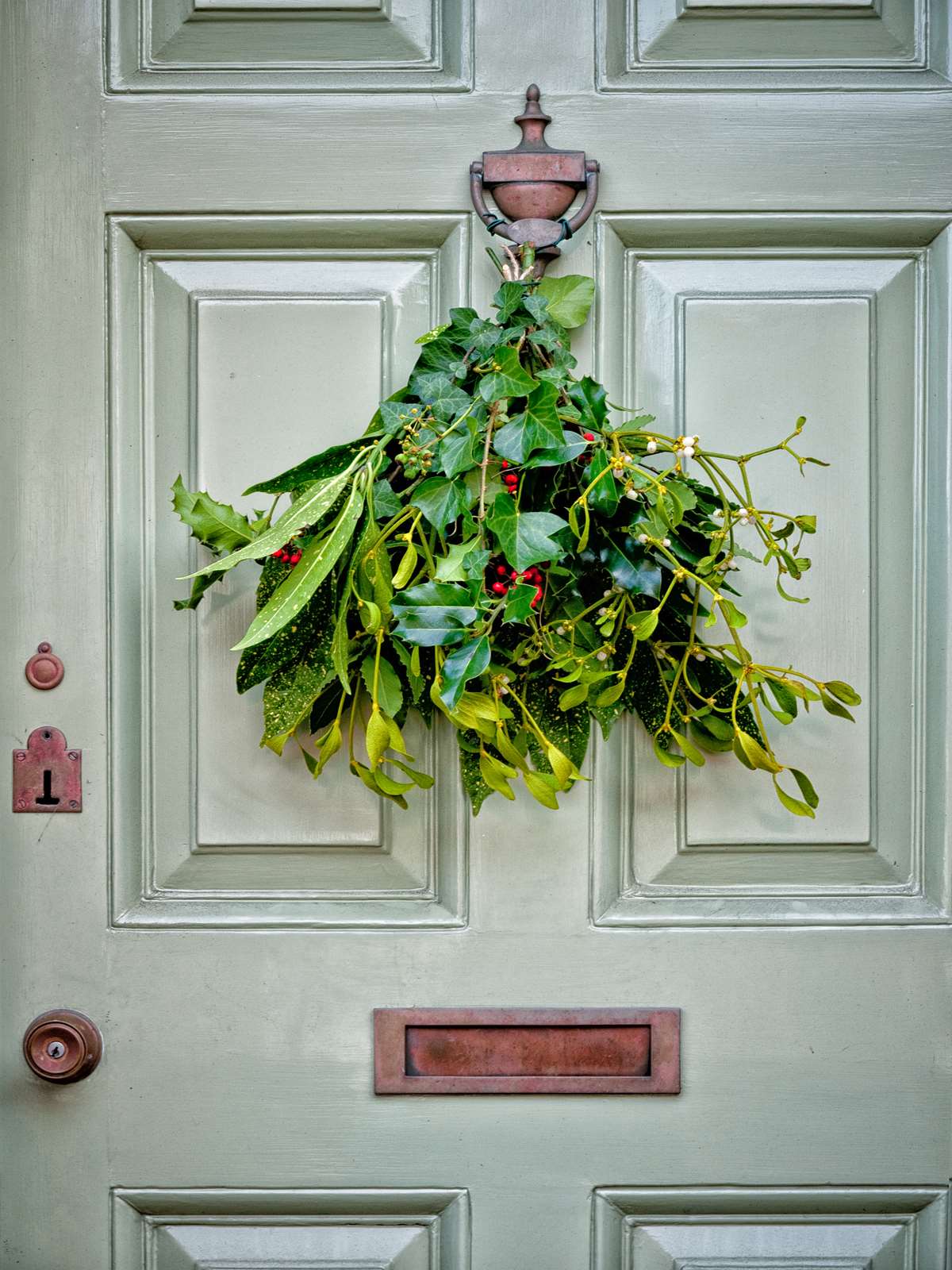 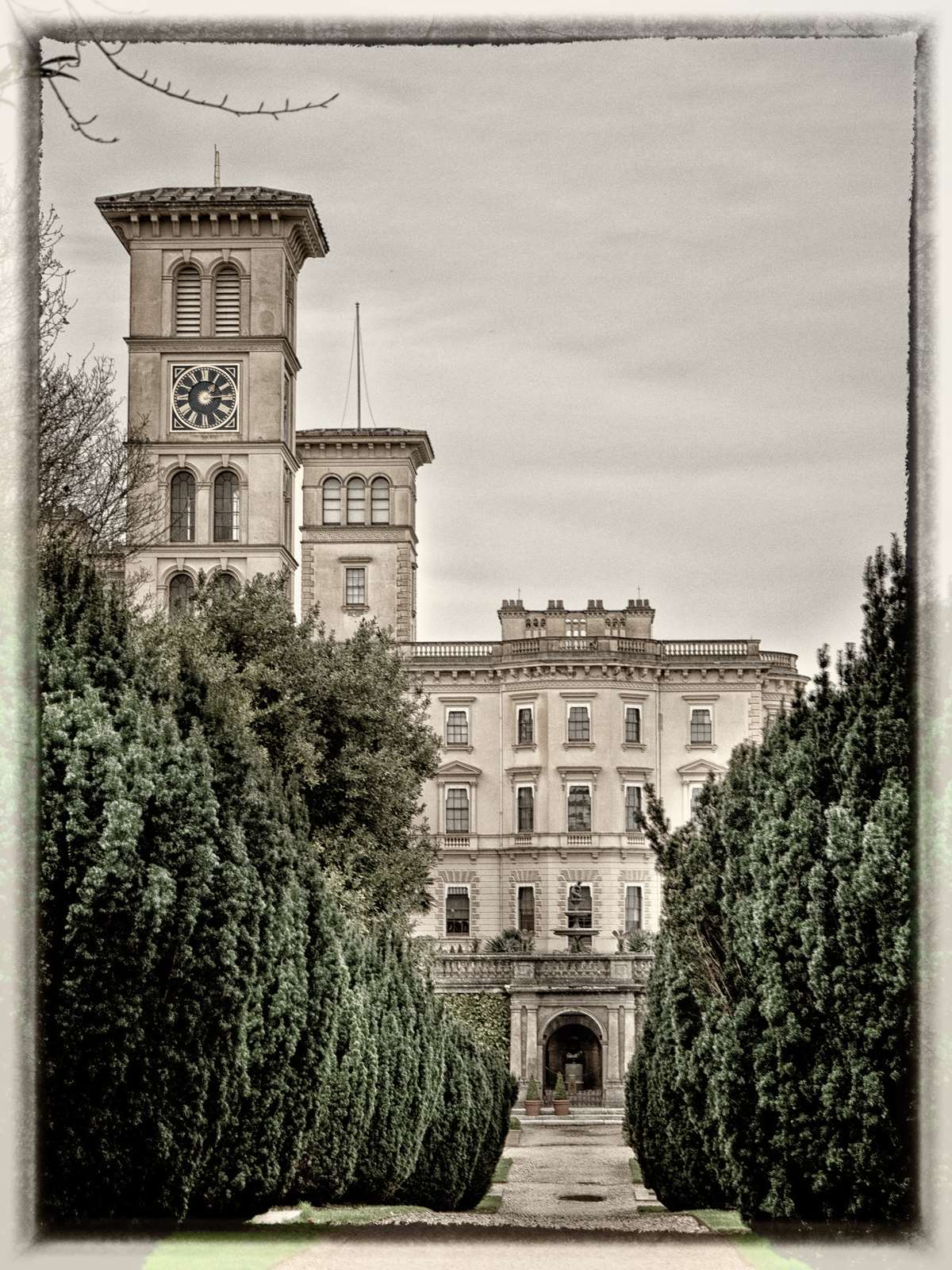 Next stop Osborne House. Queen Victoria and Prince Albert’s ‘summer house’. She apparently said it was “…impossible to imagine a prettier spot”. It’s breathtakingly beautiful whilst sickeningly ostentatious and opulent 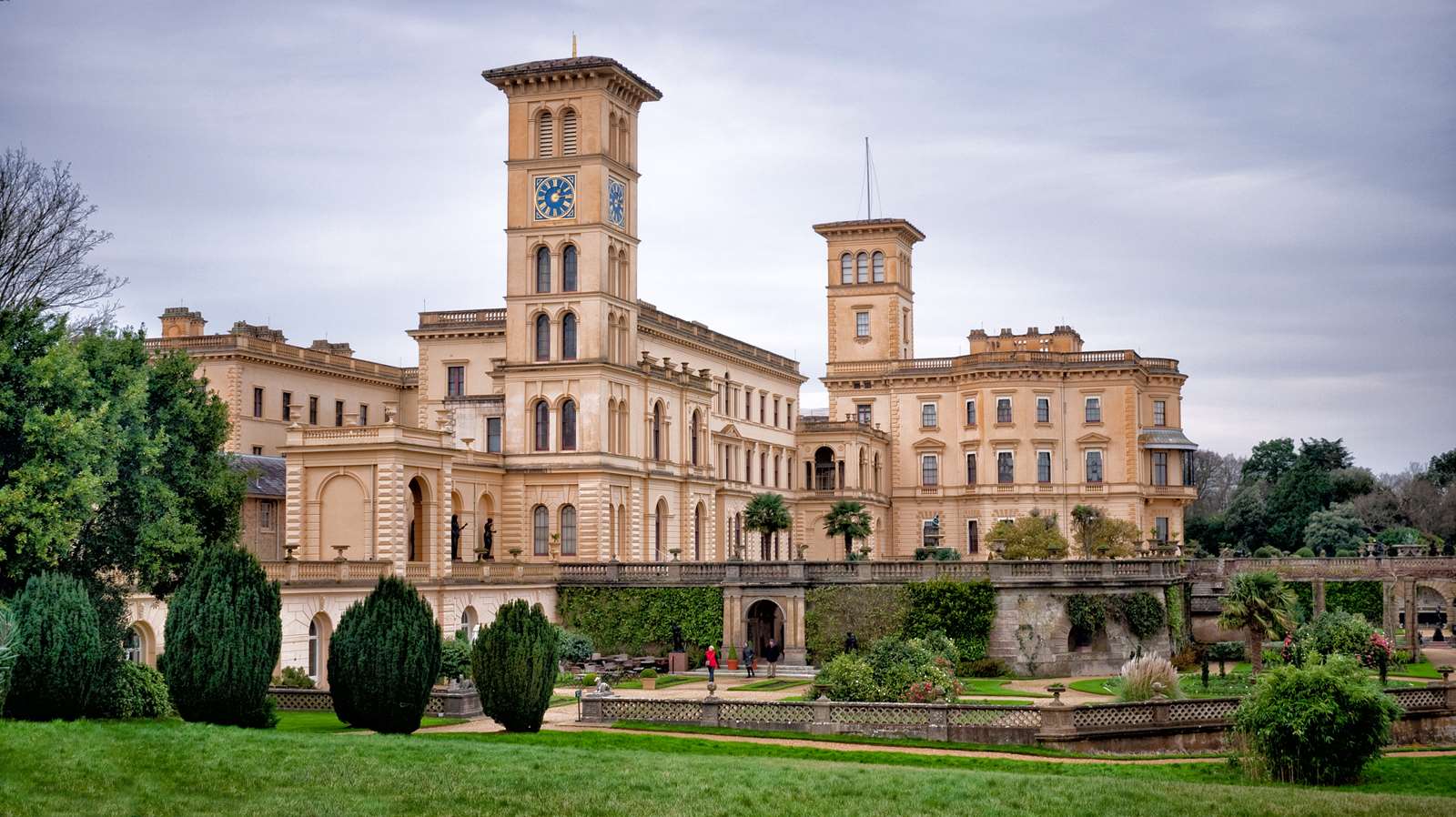 The house and grounds were open until 4pm, though unfortunately by the time we’d got there by two buses from Carisbrooke Castle, we had just two and a half hours to walk the grounds and have a tour of the house. The winter tours are much shorter than summer, with a corresponding price structure which we were disappointed by. 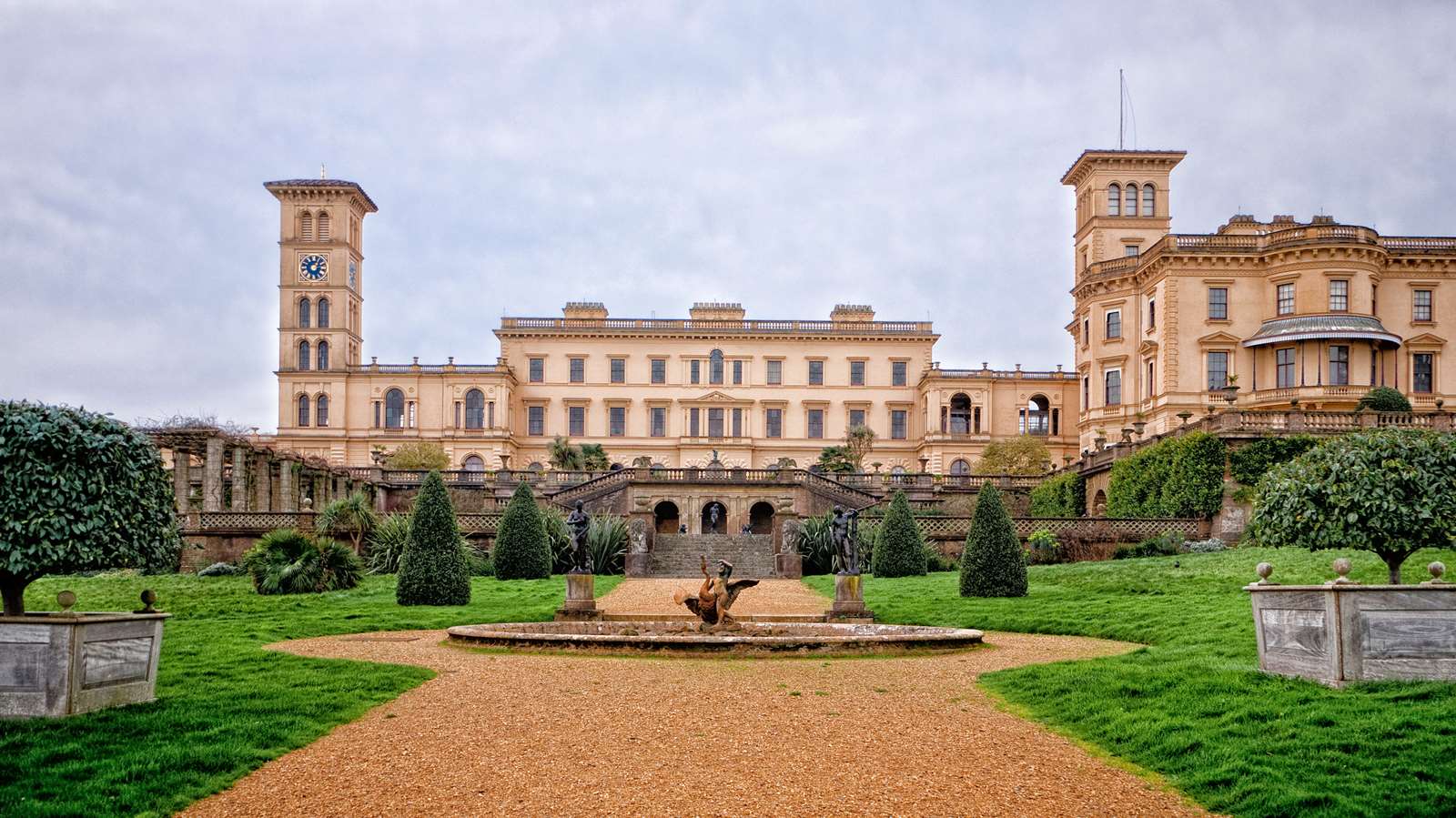 Magnificent! Only one family ever lived here, and even then only for short periods of time. Quite outrageous really. 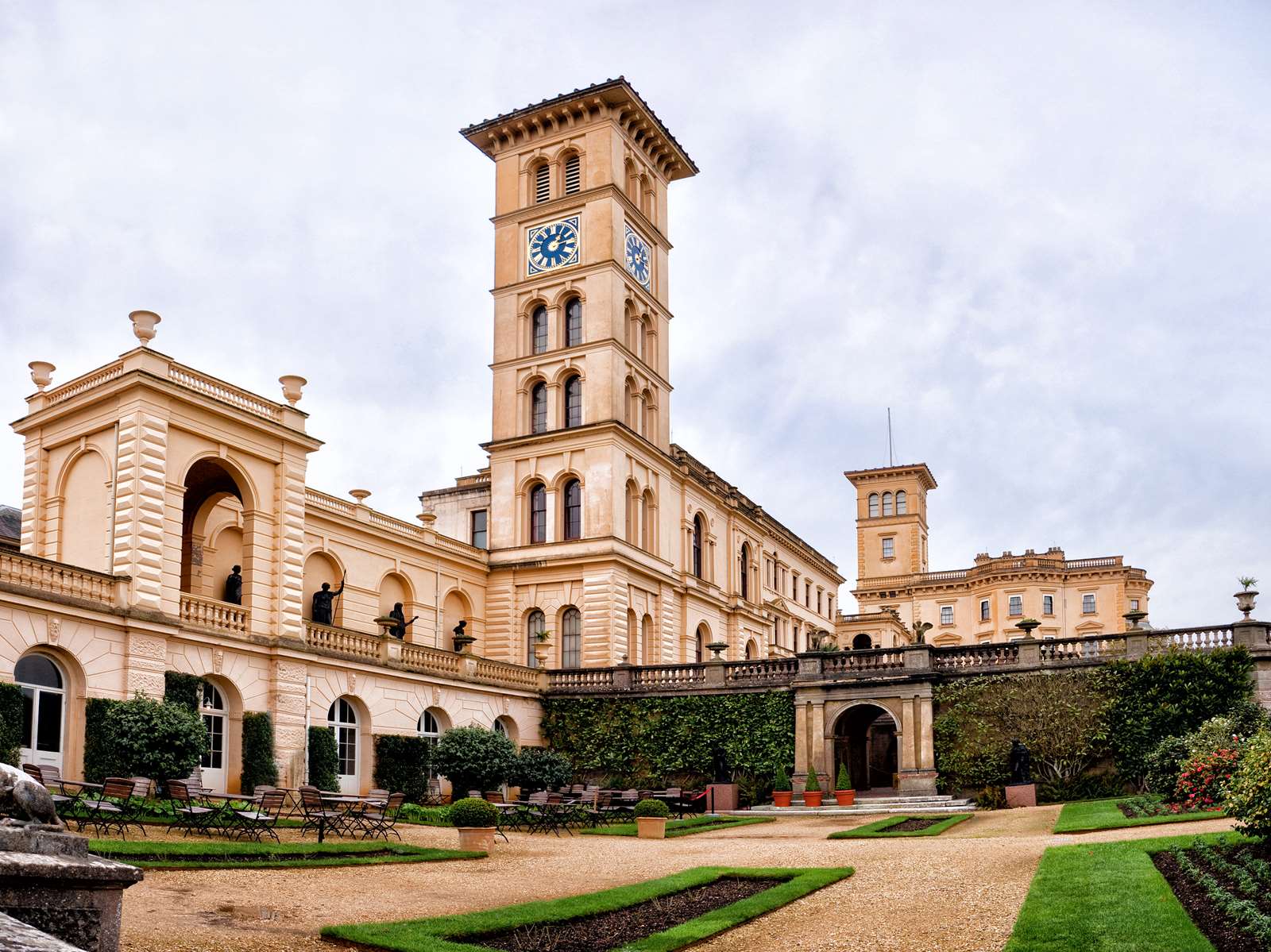 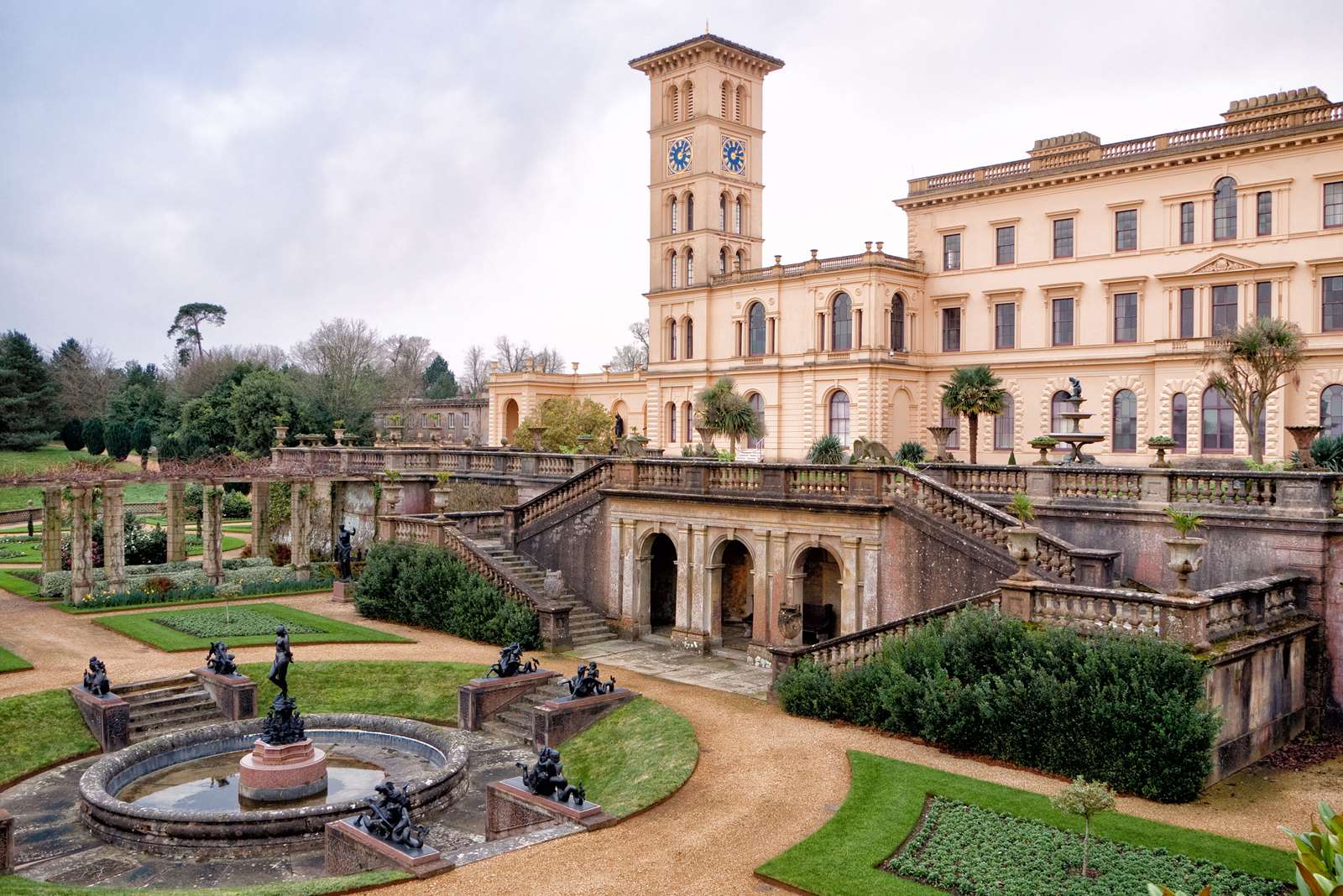 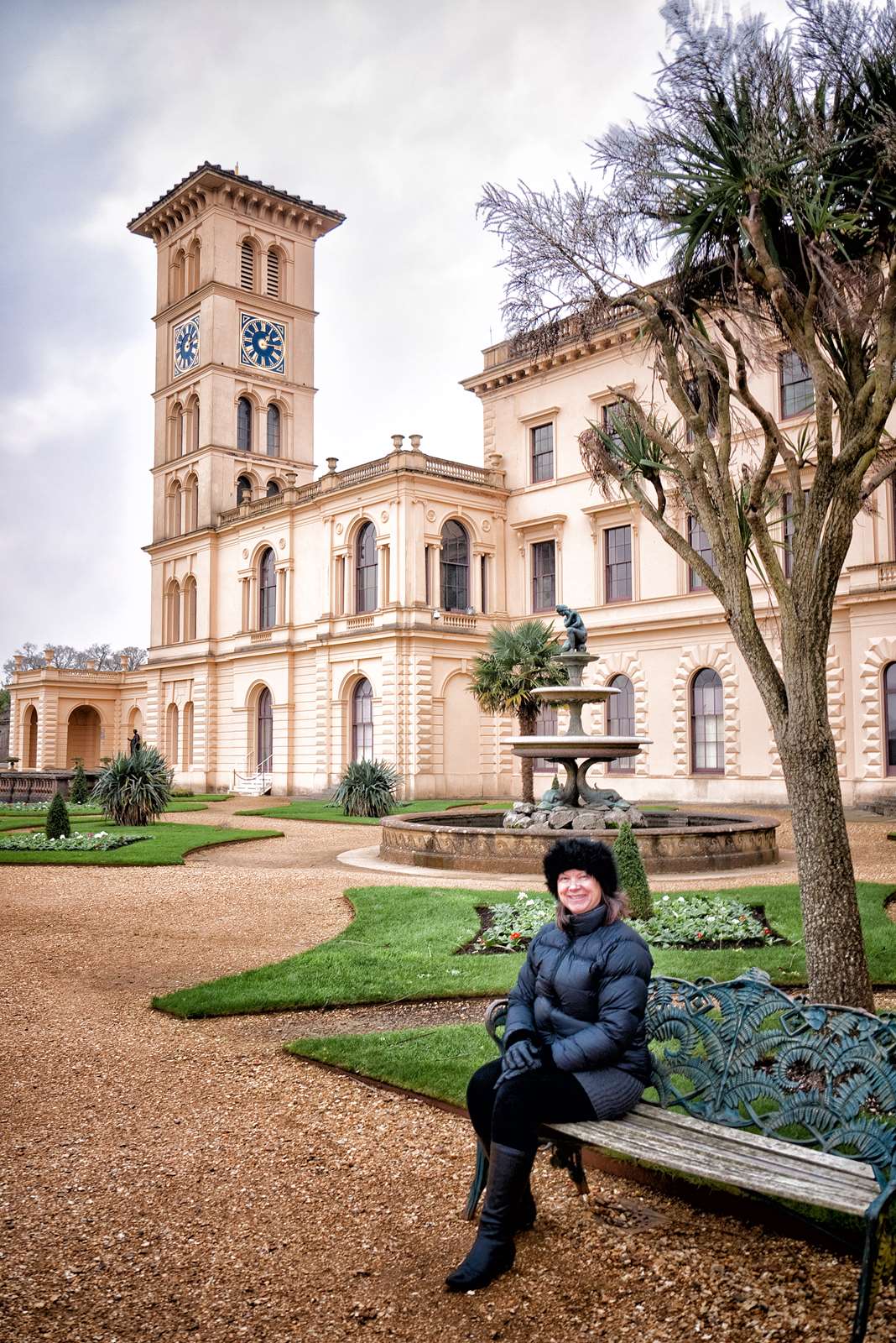 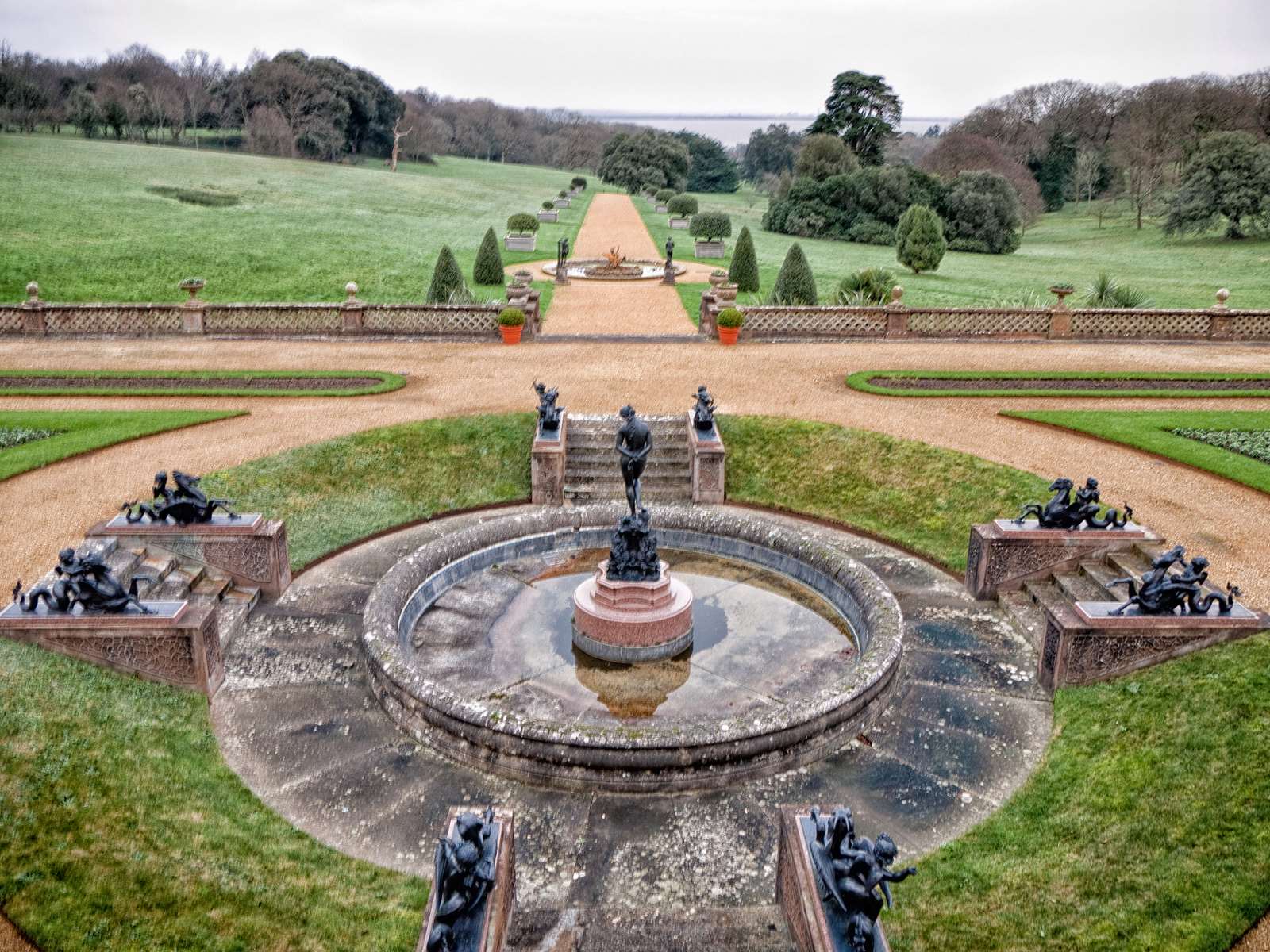 In the distance you see the beach where the royal family would disembark after their journey from Portsmouth, then travel up the gardens in their carriage. The views across the Solent reminded Prince Albert of the Bay of Naples 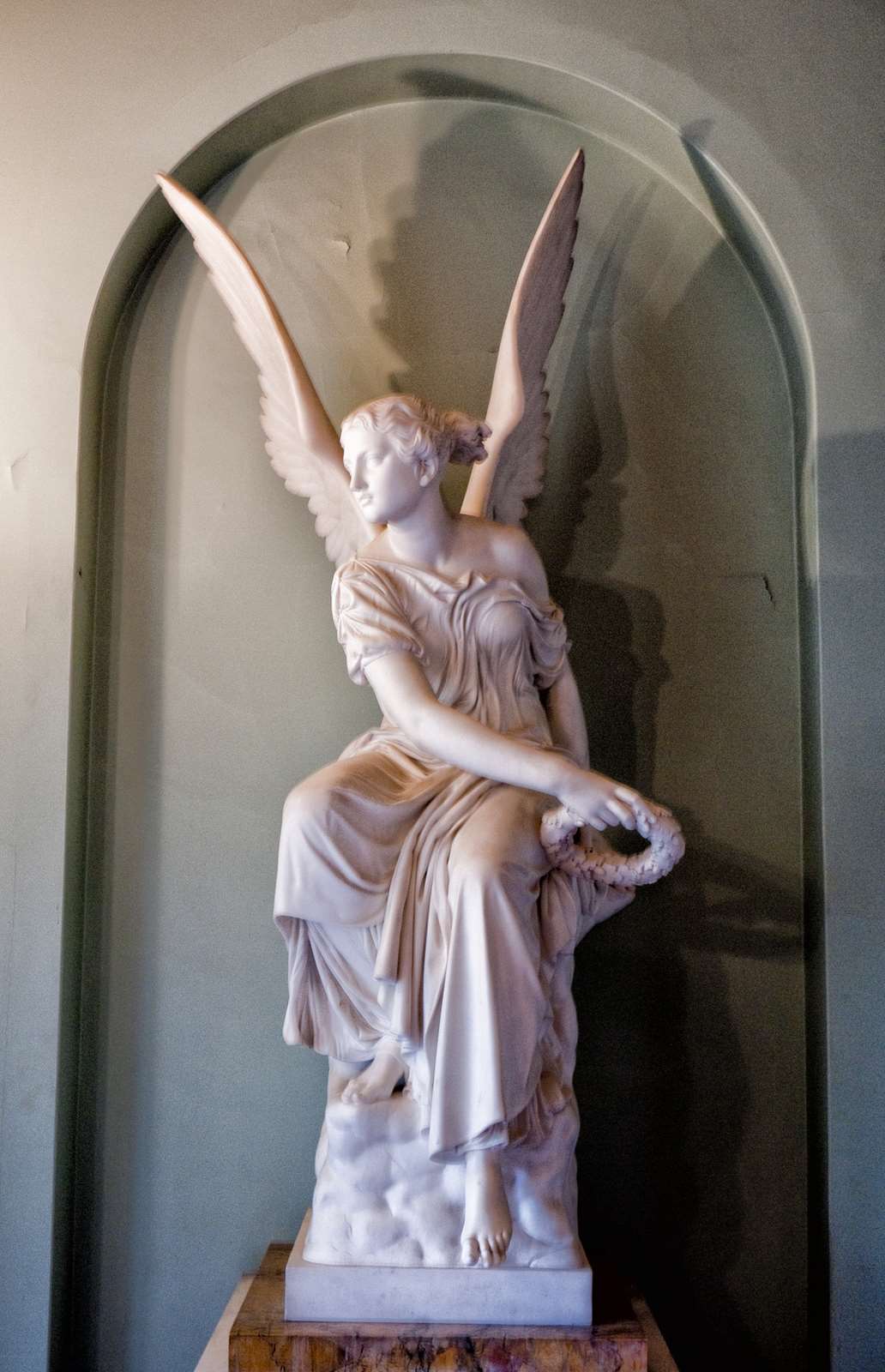 The halls are amass with works of art, many of which held special meanings to the royals (though unfortunately I can’t recall what this one that Barry chose was!) 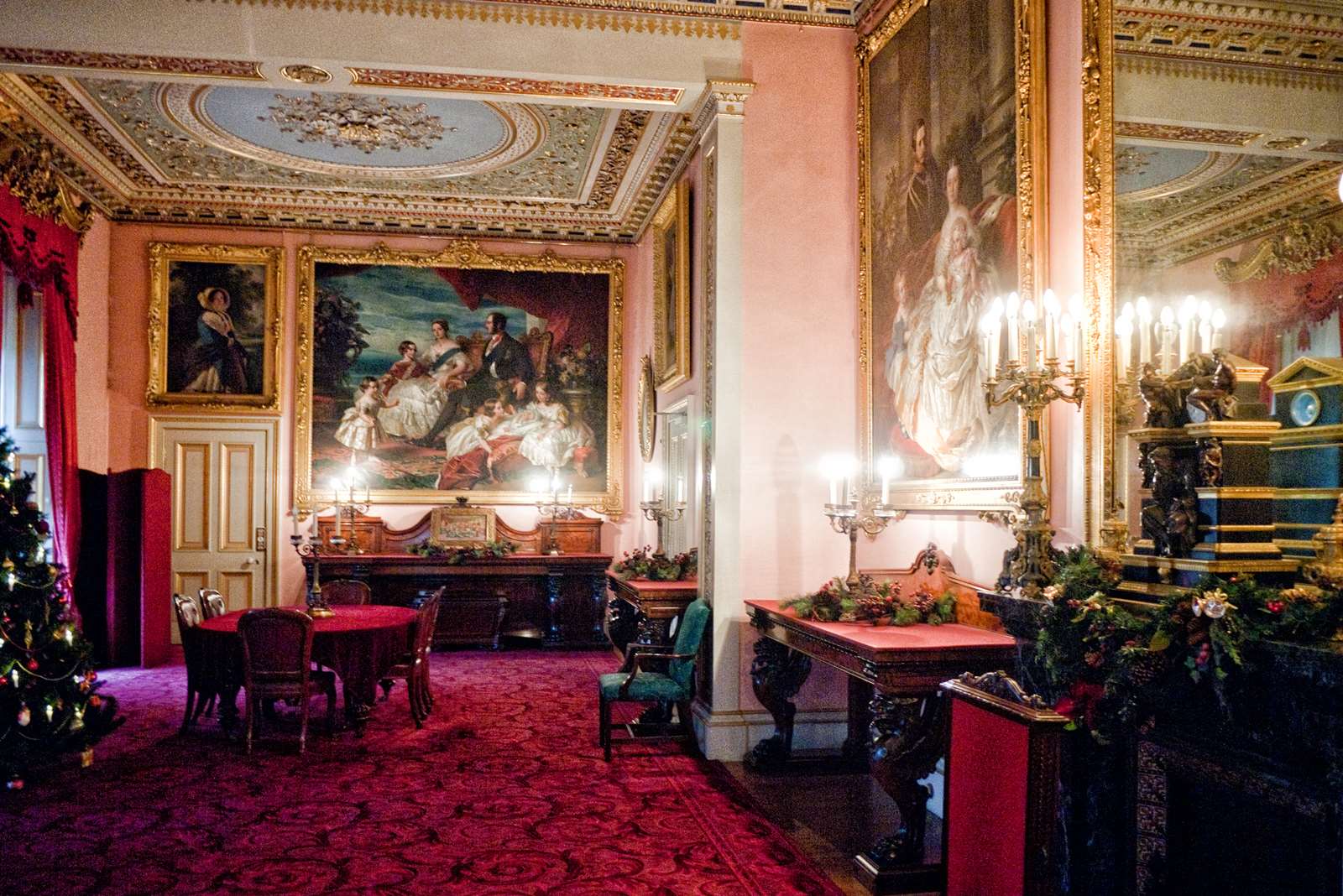 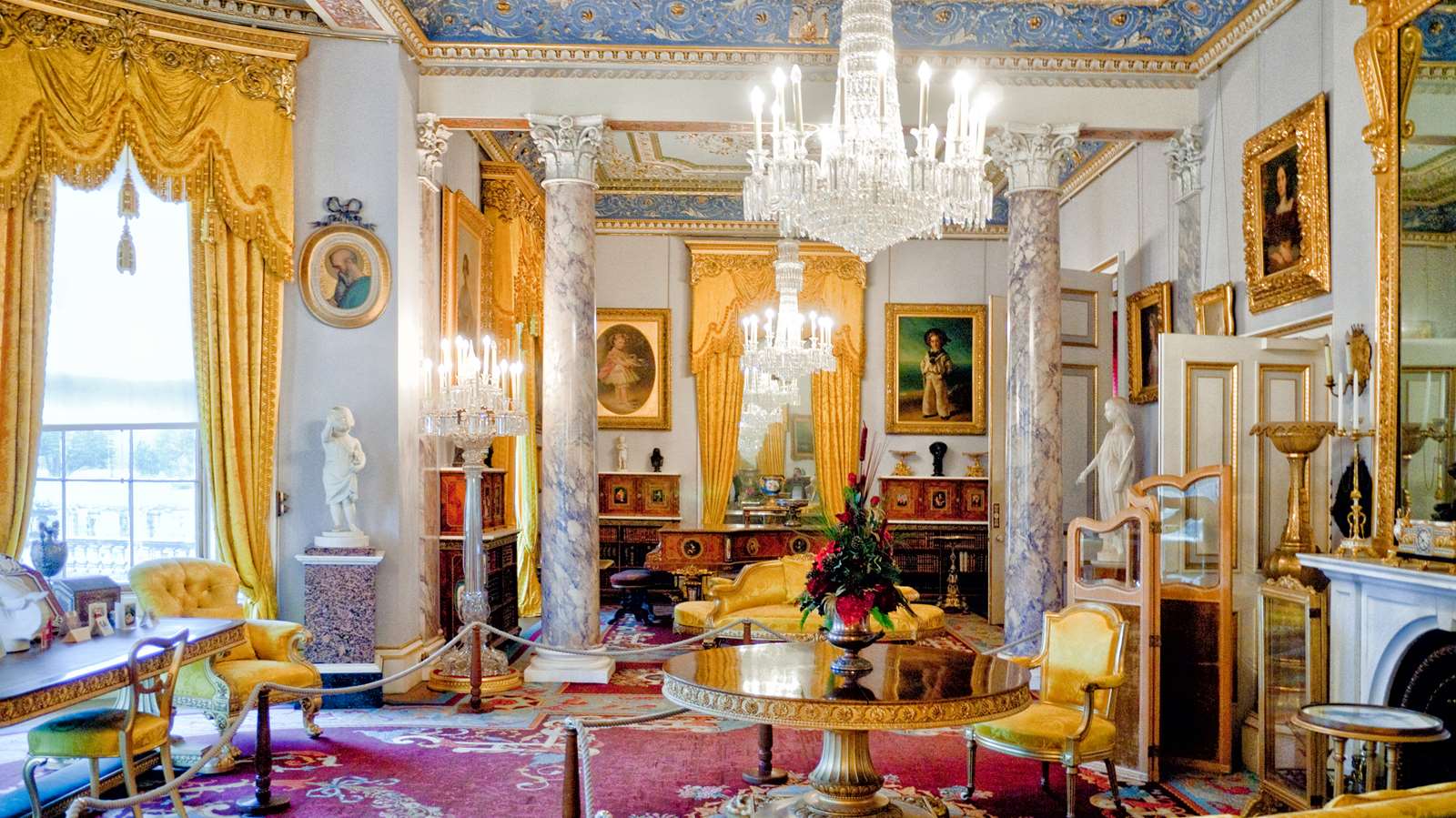 The drawing room where the royals and their guests would retire too after a meal. As Victoria was queen, the men didn’t withdraw to a separate place, the room is L shaped and they had a snooker table around the corner! 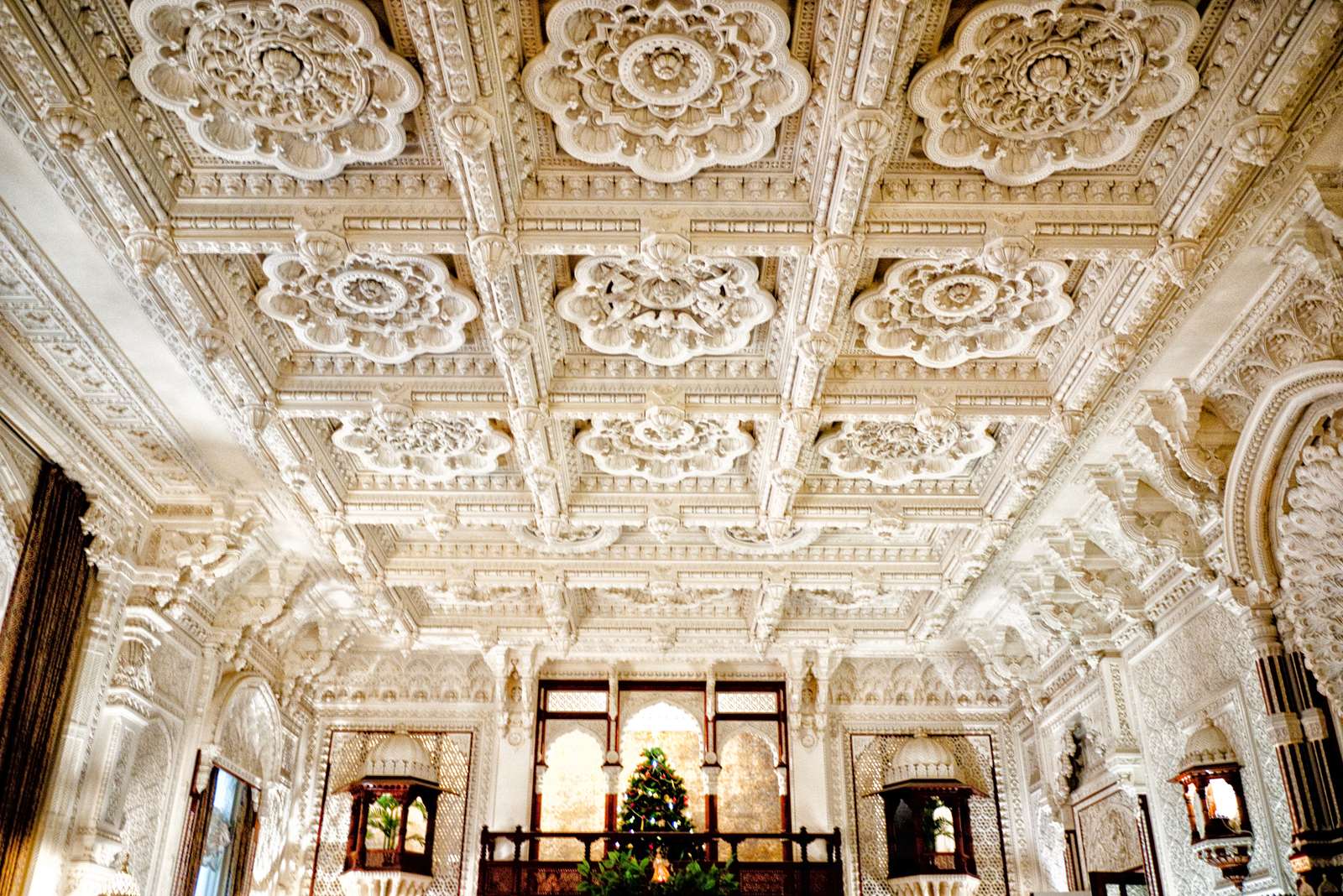 Queen Victoria had a deep and enduring love for India, the ‘Durbar Room’. She was then the ‘Empress of India’. This incredible room has ornate carvings on every inch of its walls and ceilings and an abundance of gifts in cabinets 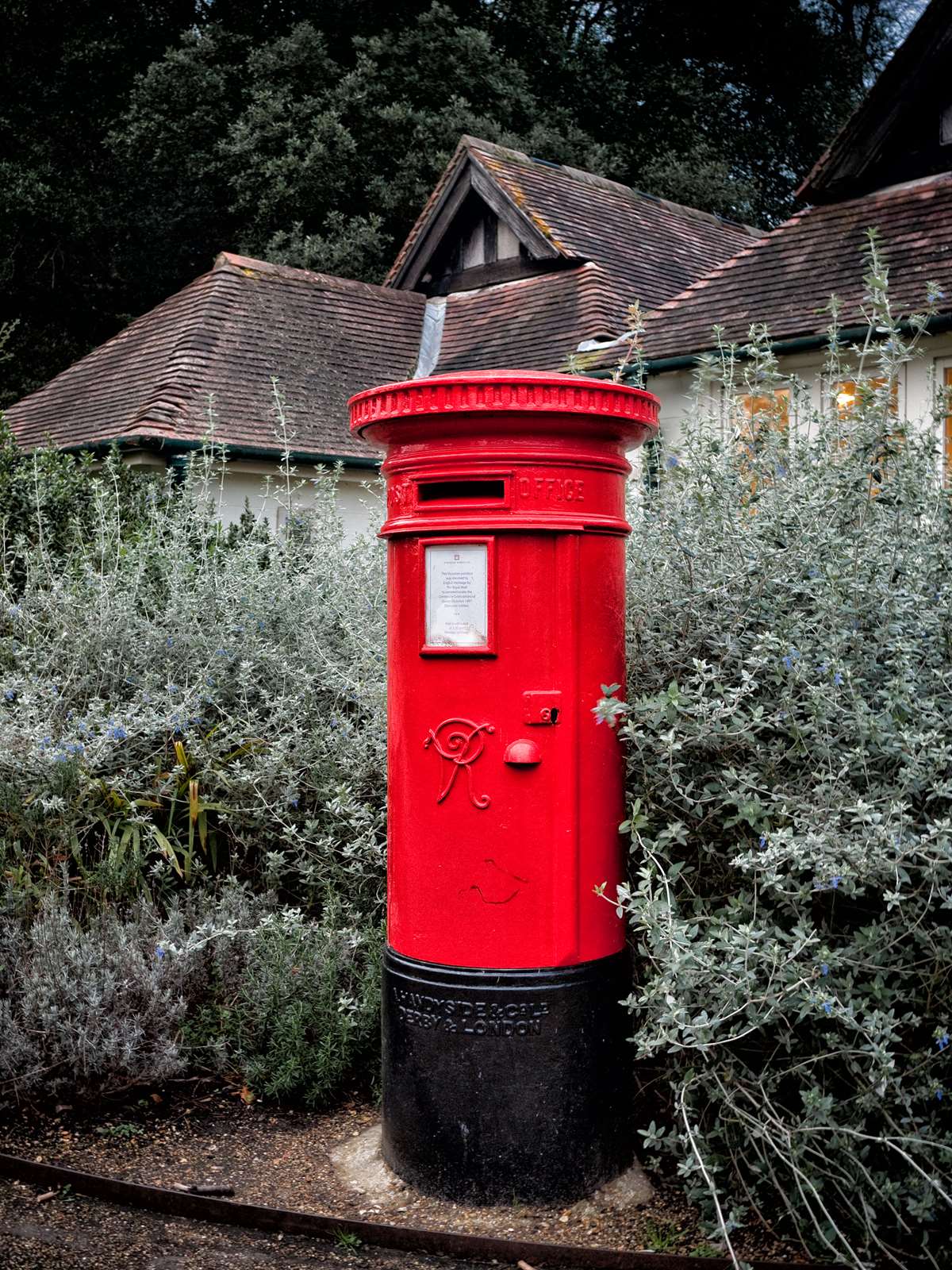 There was even a Royal Mail post box – I doubt that was there in the late nineteenth century!

Haere ra, farewell England until I return on 16th February. Please take good care of my husband until I return. I know there’s lots of folks out on the cut who’ll watch over him for me. Mostly I know he’s perfectly capable of caring for himself, he’ll watch Dad’s Army to his heart’s content, spread home brew supplies and stock merrily around the boat with no fear of any ‘nagging’, and just have fantastic fun boating alone.

Just watch the cold snaps Barry! Keep that home fire burning and I’ll be back soon …