We can feel winter approaching now, and the fire’s being lit most evenings so it’s really rather cosy on board – and for me I have to be honest and say it feels good to be still for a while. 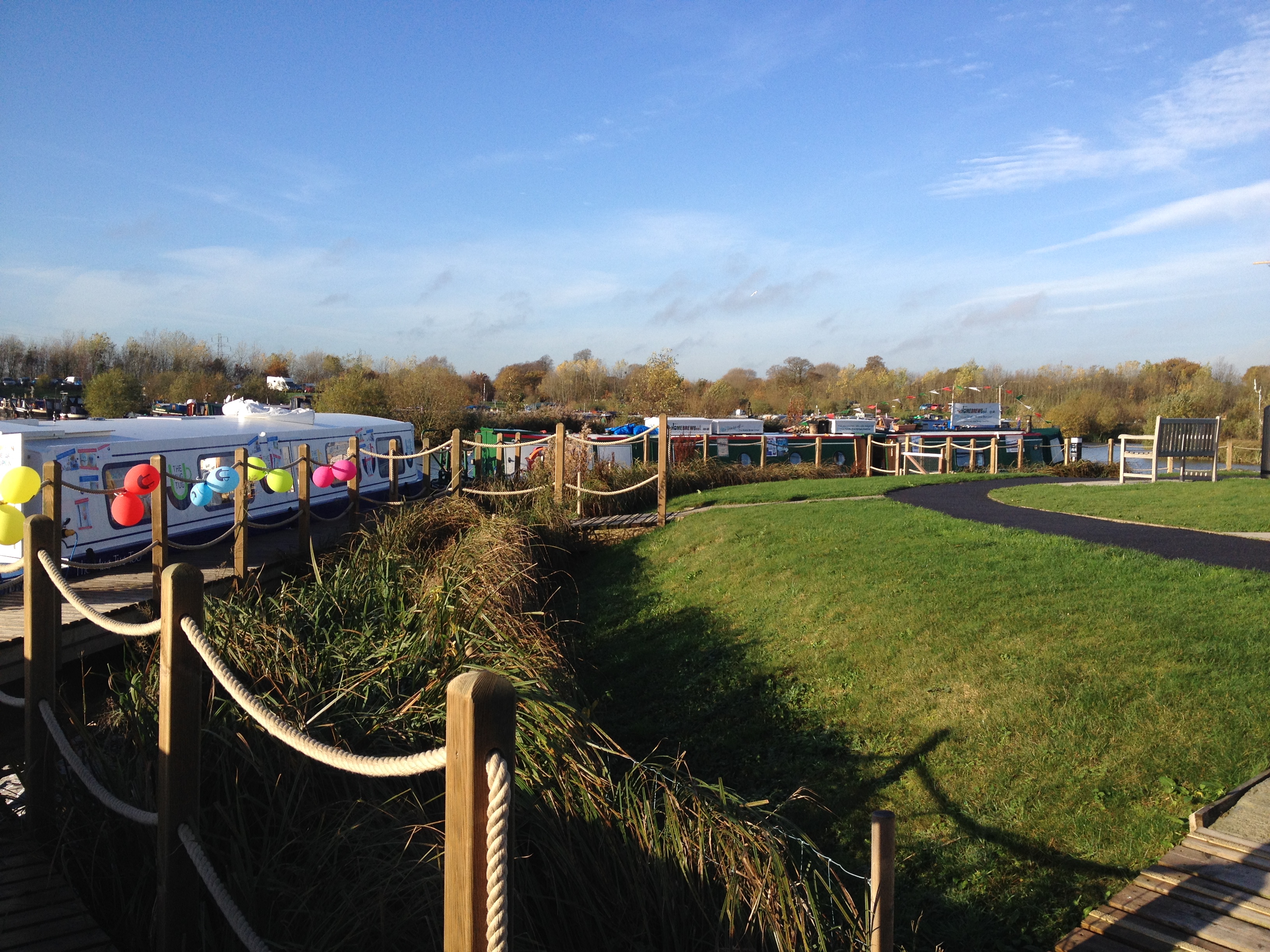 Yesterday we had a stroll into our nearby village of Willington, walking along the canal on the way and the pavement and road on the return. It’s only a twenty minute journey, so we’ll be able to go to the train station on foot when I leave for another facepainting weekend tomorrow.

We were delighted to see the sun for the first time since we arrived this morning – I took a quick photo in case we don’t see blue sky again for a while (note the picture is mine, the image at the top is one of Barry’s – as if you couldn’t tell the difference in quality!).

Having been moored up at Mercia Marina for eight days now, we’re slowly starting to get a feel for the local area and community.

There’s approval for 180 residential moorings, and space for 630 boats at Mercia – no wonder it’s reportedly the largest inland marina in Europe!

Last Sunday the marina delighted boaters and hoards of locals with a spectacular fireworks display – closely followed by the hooting of boat horns which is apparently a tradition.

One of the residents, Louise Davies, is veritable social butterfly and actively administrates a community Facebook page which advertises a whole host of activities from watercolour painting, to quiz nights, beetle drives, how to write a book night, crafts, and even ‘bus pass adventure group’ (which you can join even if you’ve not reached the age of free bus travel yet!). We’ll definitely be getting involved in a few of them while we’re here.

I’ve already volunteered Barry to get the local photography group off the ground that Louise has been wanting to move forward for a while. Louise visited us this morning to discuss possibilities and how it could progress. It’ll be interesting to see how it works out, as people will have a range of abilities and needs. You’ve got to start somewhere though …

We’re also going to get a ‘Home Brewing on a Boat’ group together in the near future with the aim of demystifying the possibilities of making your own beer, wine, cider or spirits on board. If we can find room while running the business and carrying the stock, anyone can if it’s something they want to do. Like anything, you’ll make the space available.

Over the summer, one of the boaters had her dad from Holland to stay .

He’s written a song about his adventures, produced a video to go with it, and posted it on Youtube . If you can put aside the pronunciation of ‘canal’ (it sounds more like ‘camel’), Loek’s One Man Band’s The Happy Narrow Canalboat song is really rather lovely.

Opened just over twelve months ago, the Boardwalk building which is sort of adjacent to our trading mooring spot, has recently been awarded the accolade of being voted the best small commercial building in the East Midlands, by the Local Authority Building Control (LABC). The Boardwalk consists of:

” … a promenade of 6 boutique retailers, with offices above, centred around a two storey bar and restaurant. The development fronts onto a raised wooden walkway offering terrific views of the water, boats and wildlife. We also created a sensory garden at the end of The Boardwalk for people to sit and relax.”

We had my eldest sister, niece and great nephews visit for the fireworks which was fabulous, and yesterday welcomed our friend Dave aboard for a cup of tea and a chat. He and Angie sent us a wedding card when we got married at The Dog and Doublet in September 2009. We didn’t know them but they’d been avid blog followers so we were extremely touched at their thoughtfulness and have kept in touch over the years. Their narrowboat ‘Lady Esther’ is for sale at the marina.

Being in one place for a while means it’ll be easier for many people to pop by and visit – we’re looking forward to many more in the coming months.

Get in touch first though – despite being ‘still’ as a floating home, I’m still going to be more mobile than I’d like and off the boat frequently! Barry always loves to see a friendly face though, so come anyway …

2 thoughts on “Activities, songs and awards at Mercia Marina”