Having had three very pleasant kiwi visitor episodes in August and early September, the most recent lasting eleven days and nights, we’re understandably a touch out of synch on blog posting. 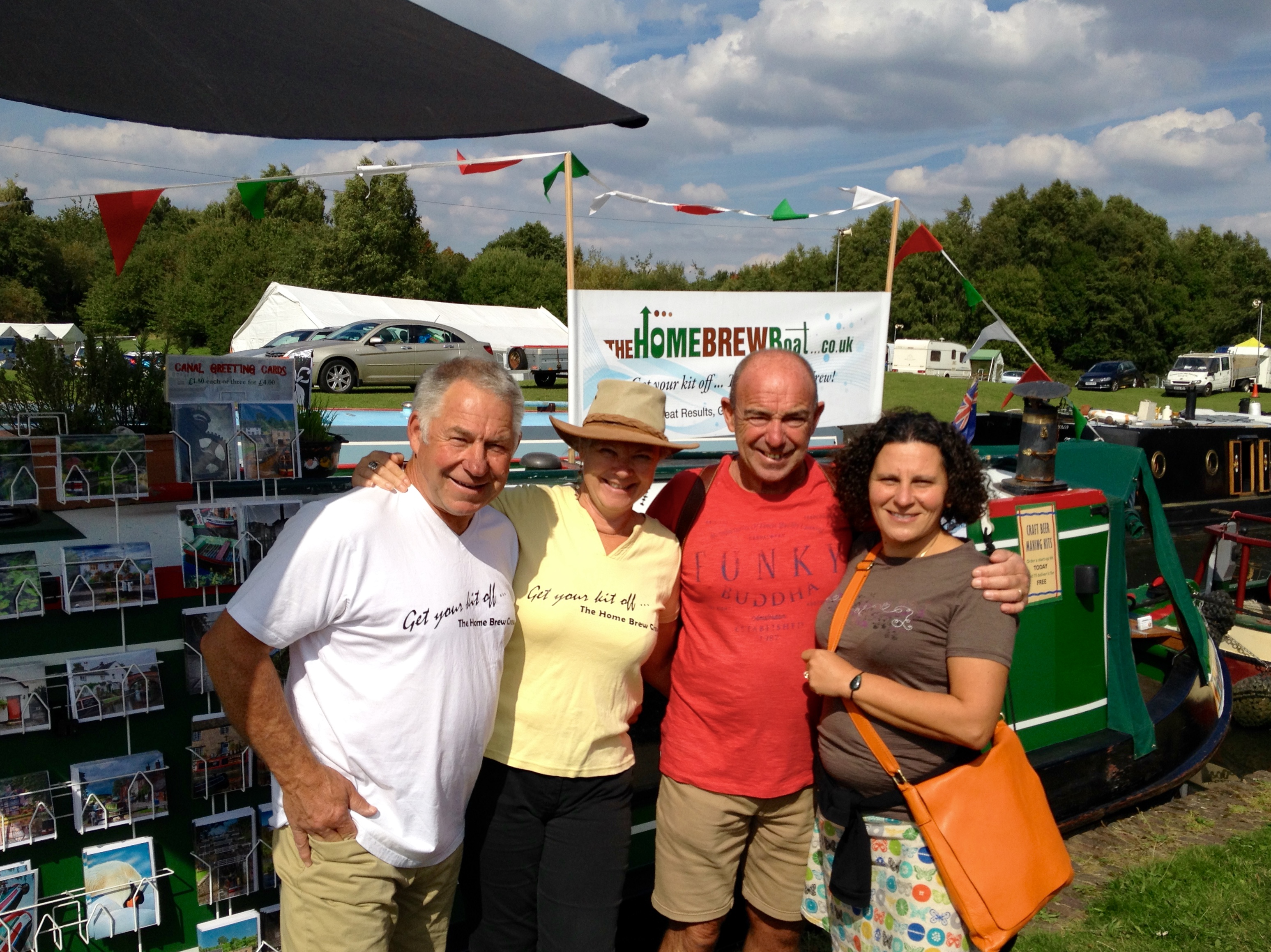 Anna and Andy just before they left us on Friday 12th September, after arriving on 1st September – the final day of the IWA Festival of Water

Barry’s handed over some stunning images of our trip down and up (I find it strange too, but that’s apparently how we did it!) the River Nene last month, so I fully intend to post those along with a few stories in the near future.

I did, however, want to update everyone as to where we’ve just been, and where we’re heading next …

Trading in The Black Country

There’s a very distinct dialect spoken by true folks from The Black Country. I’m mostly au fait with it having lived for three years in Kidderminster doing nurse training in the late 1970s, but Barry struggles to comprehend the really strong accents. 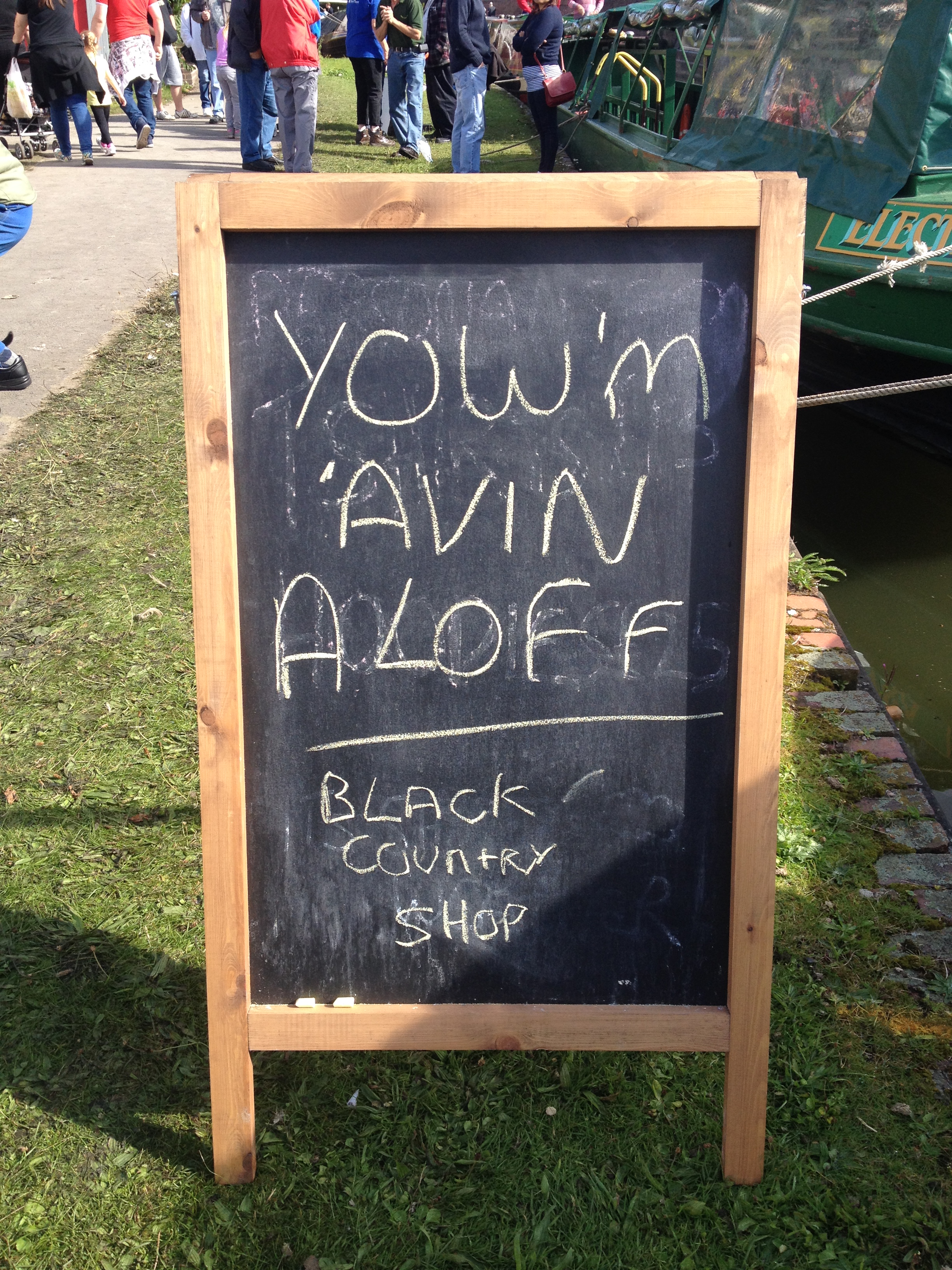 We love the area and people though – and returning to Bumble Hole for our second consecutive Black Country Boating Festival last weekend was ‘bostin’! That’s a word I’d forgotten until we chatted with a fellow boater called Wayne yesterday when memories came flooding back. It basically means ‘great’ or ‘excellent’.

It’s purported that 80% of the words used in the Black Country are from Anglo Saxon descent – so in a nutshell it’s really more English than the language we’re used to!

Here’s a few more examples found on a google search to titilate your imagination:

Bumble Hole Nature Reserve, once a hub of industrial activity, is definitely worth a visit. Amidst the urbanisation of the area it’s a veritable  piece of paradise.

The view from the top of the hill 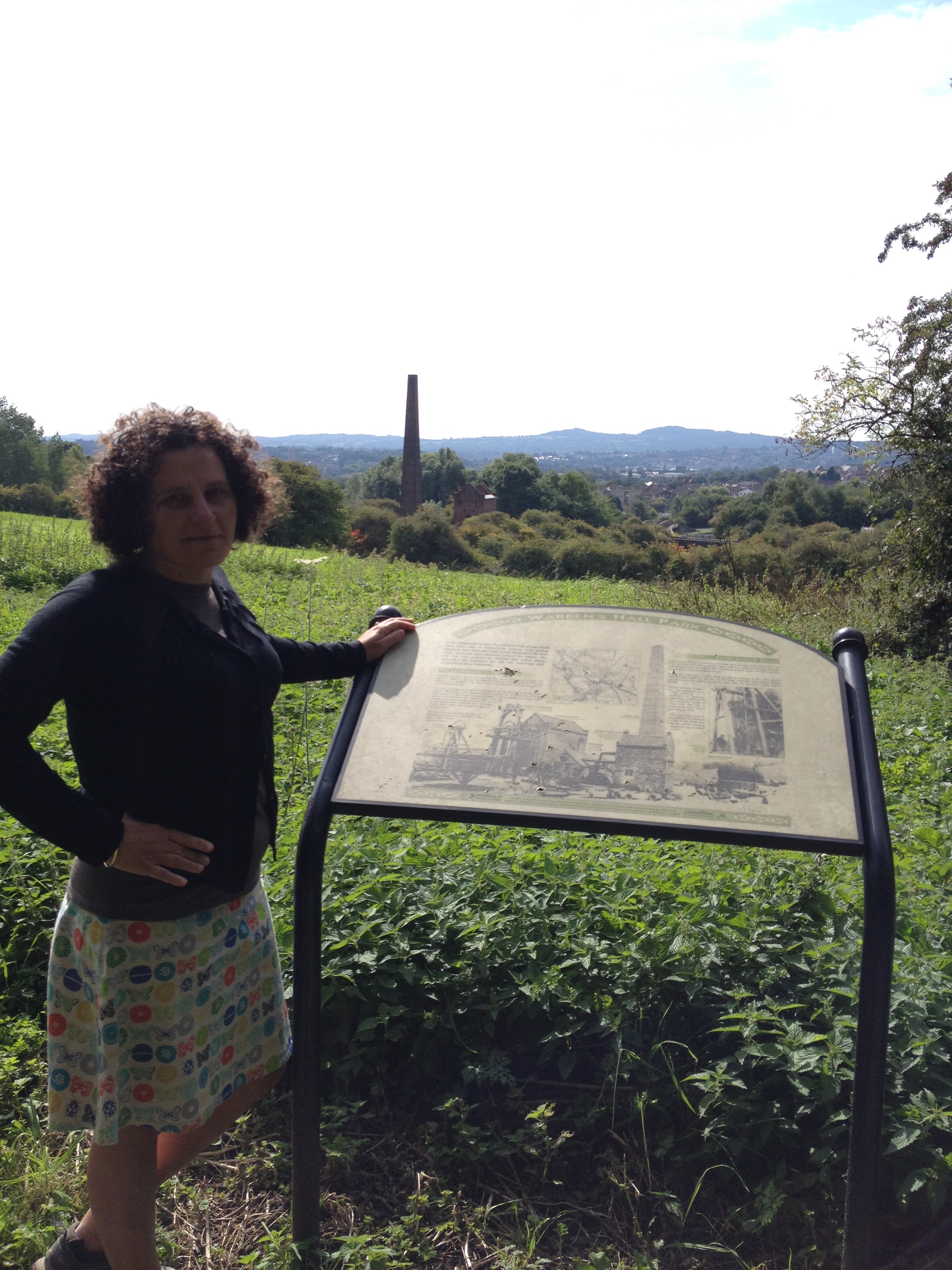 It was the 30th anniversary of the BCBF. Proudly organised and run totally by volunteers (they are AMAZING), it attracts over 10,000 visitors a year, and has helped raise over £100,000 for local and national charities.

The weather mostly held for everyone thankfully after so many people had put in such hard work to organise and attend the event.

For us, as well as a great trading opportunity, it was also terrific to spend precious time with fellow boaters and welcome visitors who came to specially to see us (sorry we forgot to get a photo Adele and Andy!). 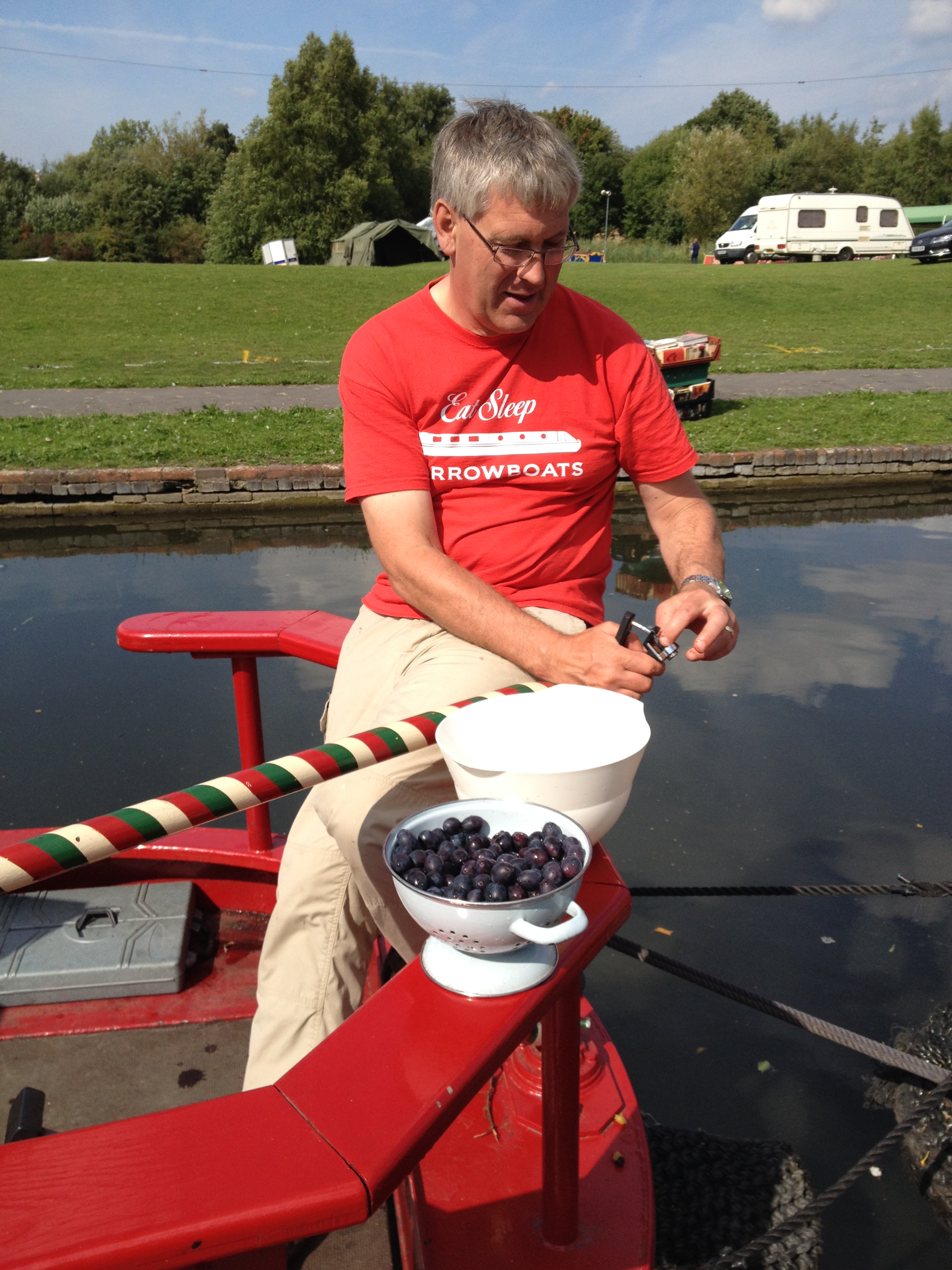 Andy Stoning foraged damsons for Wild Side jam making – following a recent ‘letter to the editor’ in Waterways World I thought I’d snap him in the act! 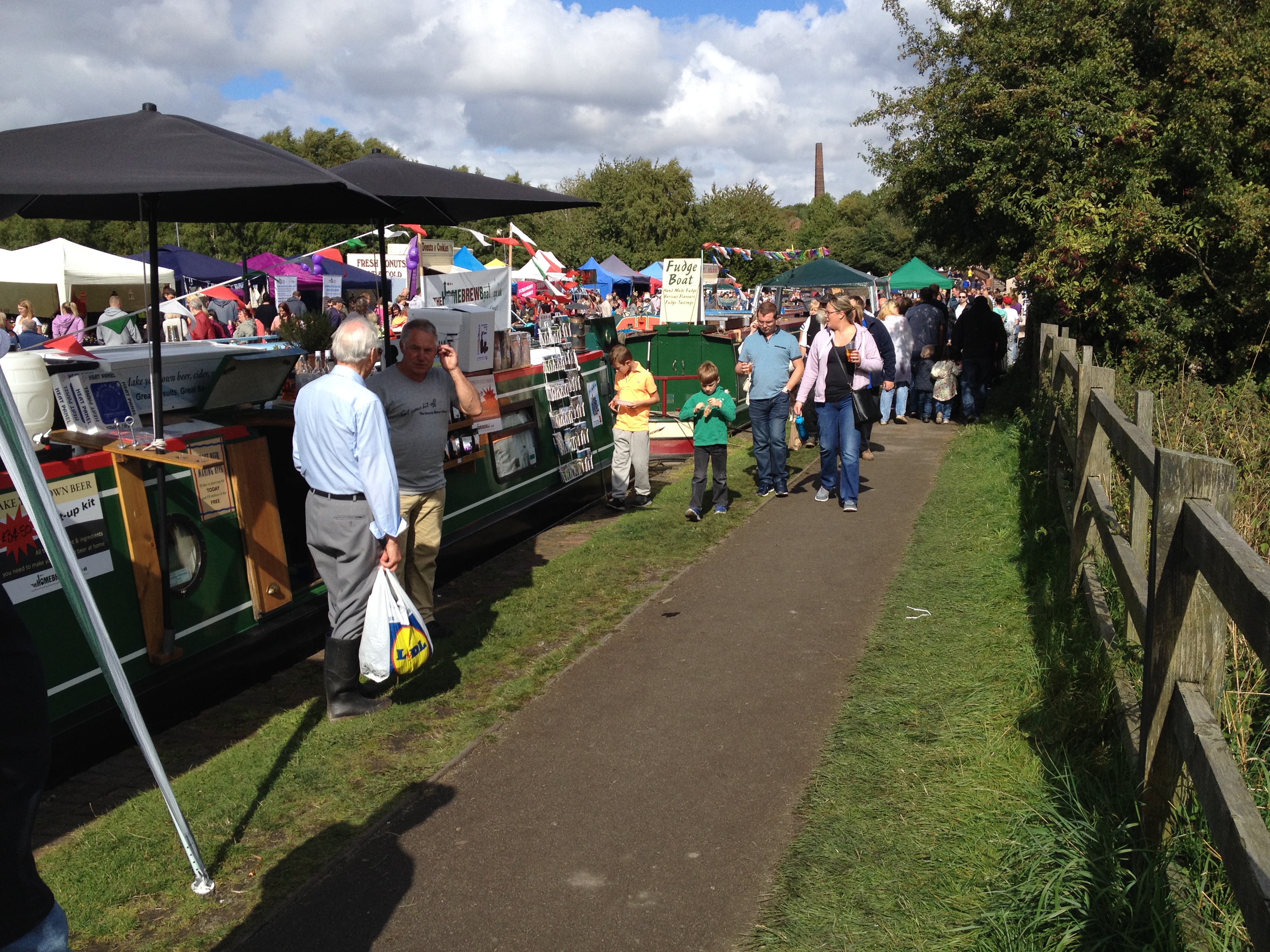 Barry trading as The Home Brew Boat at the BCBF 2015 – great sales on the liqueur flavours, in fact probably the best ever! 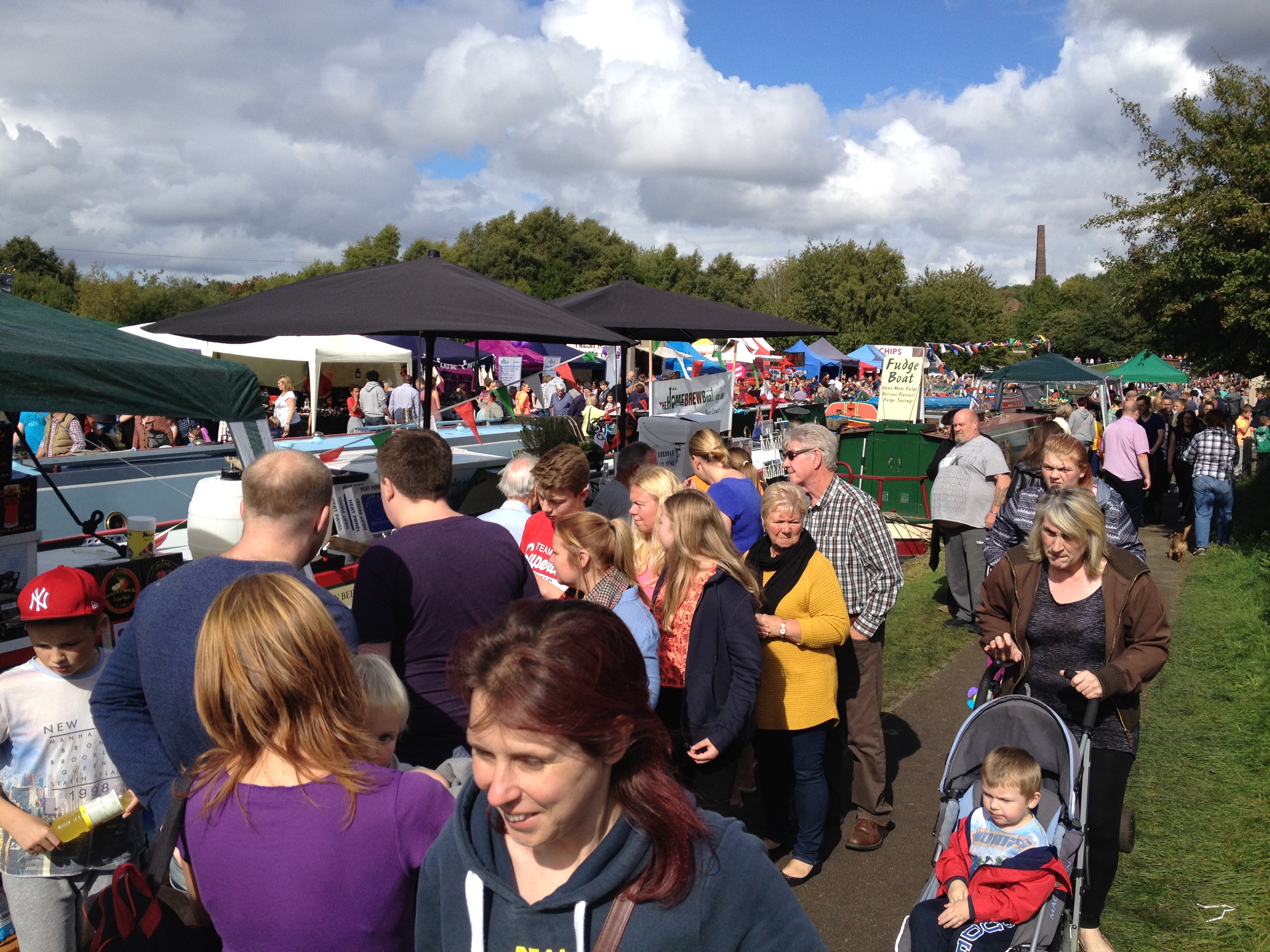 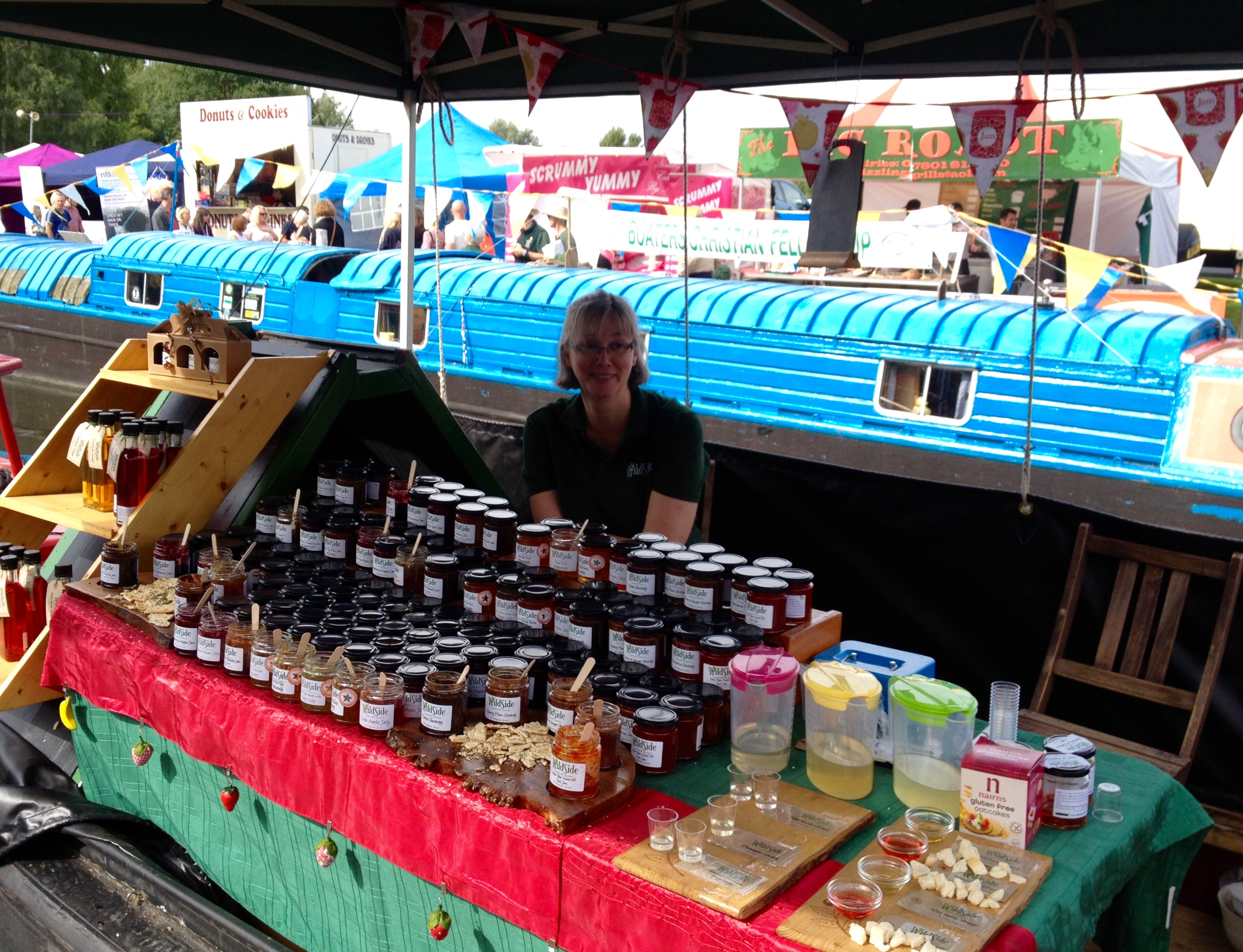 Helen happily sitting in the shade selling her delicious jams and chutneys (‘scrummy yummy’ as it aptly says above her in fact!) 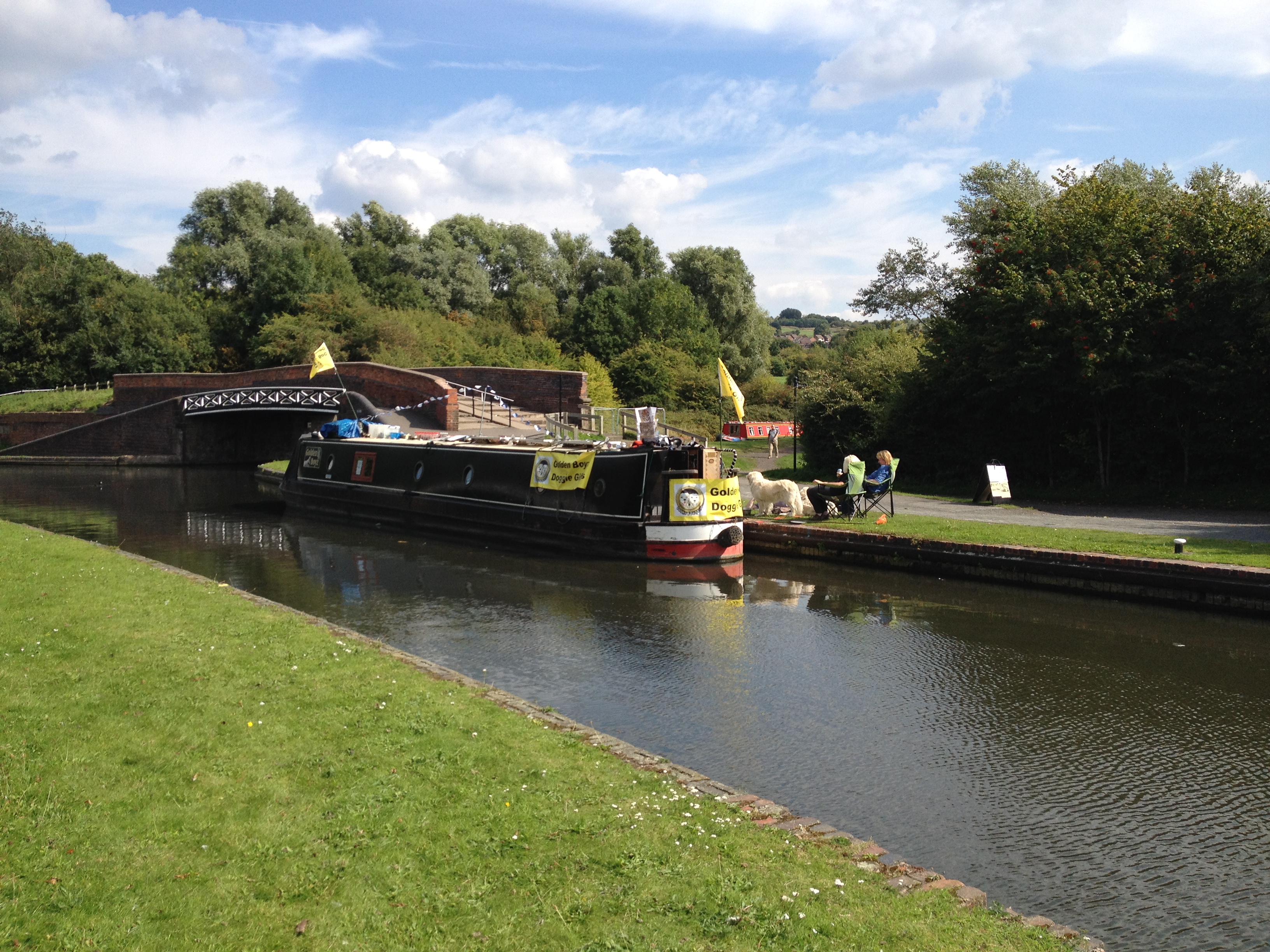 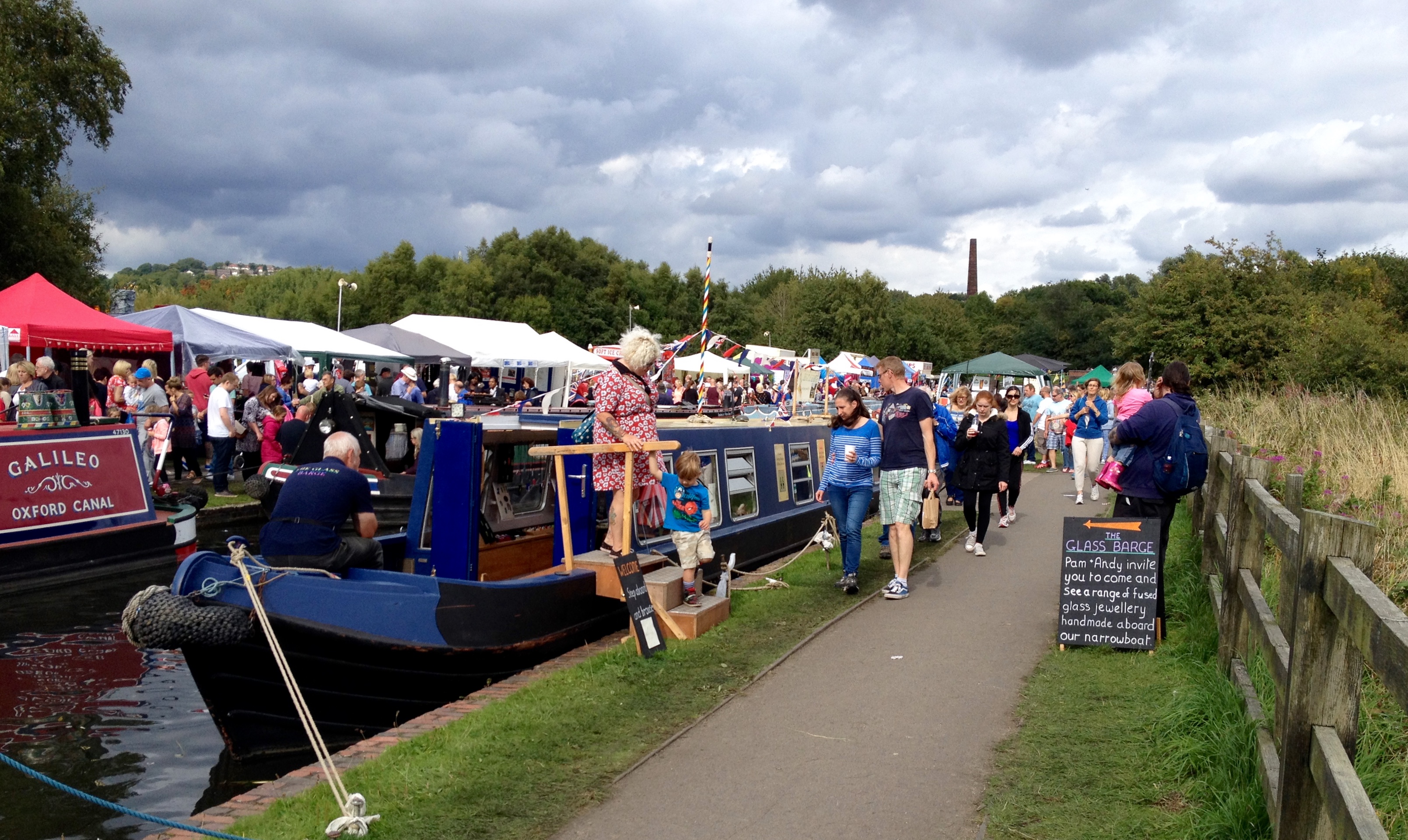 First time we’ve traded with The Glass Barge – Pam and Andy Kallender,who welcome people on board their narrowboat to view their divine glass jewellery made in their floating workshop

Whatever anyone disparagingly says about the echelons of the Canal and River Trust (CaRT), we’ve only ever had positive experiences.

Richard Parry, the Chief Executive, is one of the friendliest people we’ve met on ‘the cut’, and has arrived at almost every canal-side trading event we’ve been at in 18 months – remembering they’re held at weekends this is a tremendous achievement and we really appreciate his support.

Barry and Tony Hales CaRT Chairman, with just ten days left before he steps down from the role

Barry with Richard Parry, CaRT CEO – we think he’s been to every trading event apart from a couple since we’ve been in business

Lots of our fellow traders are off to Titpon this weekend for their annual event. Having been unsuccessful in communicating with the organisers earlier this year, and  been specifically invited to trade at the bi-annual Huddlesford Heritage Gathering in Lichfield, that’s where we’ll be moving towards from tomorrow.

I’ve got a few (online) Life Coaching clients booked in along the way, so we’ll be spreading the journey out in between sessions.

Happily I’ll be facepainting in Lichfield as well as Barry selling his home brew wares – I wasn’t able to at the BCBF as they have a gorgeous colleague who returns each year as she’s a local resident. Having been in contact with her through Facebook, it was a pleasure to meet and chat with Louise (aka Painting Pixie) on Sunday.

We think it’s going to be a rather soggy journey heading north east – autumn is setting in and bringing cool weather with her. Almost time to light the fire!